New Tesla Cybertruck revealed: yes, it really looks like this 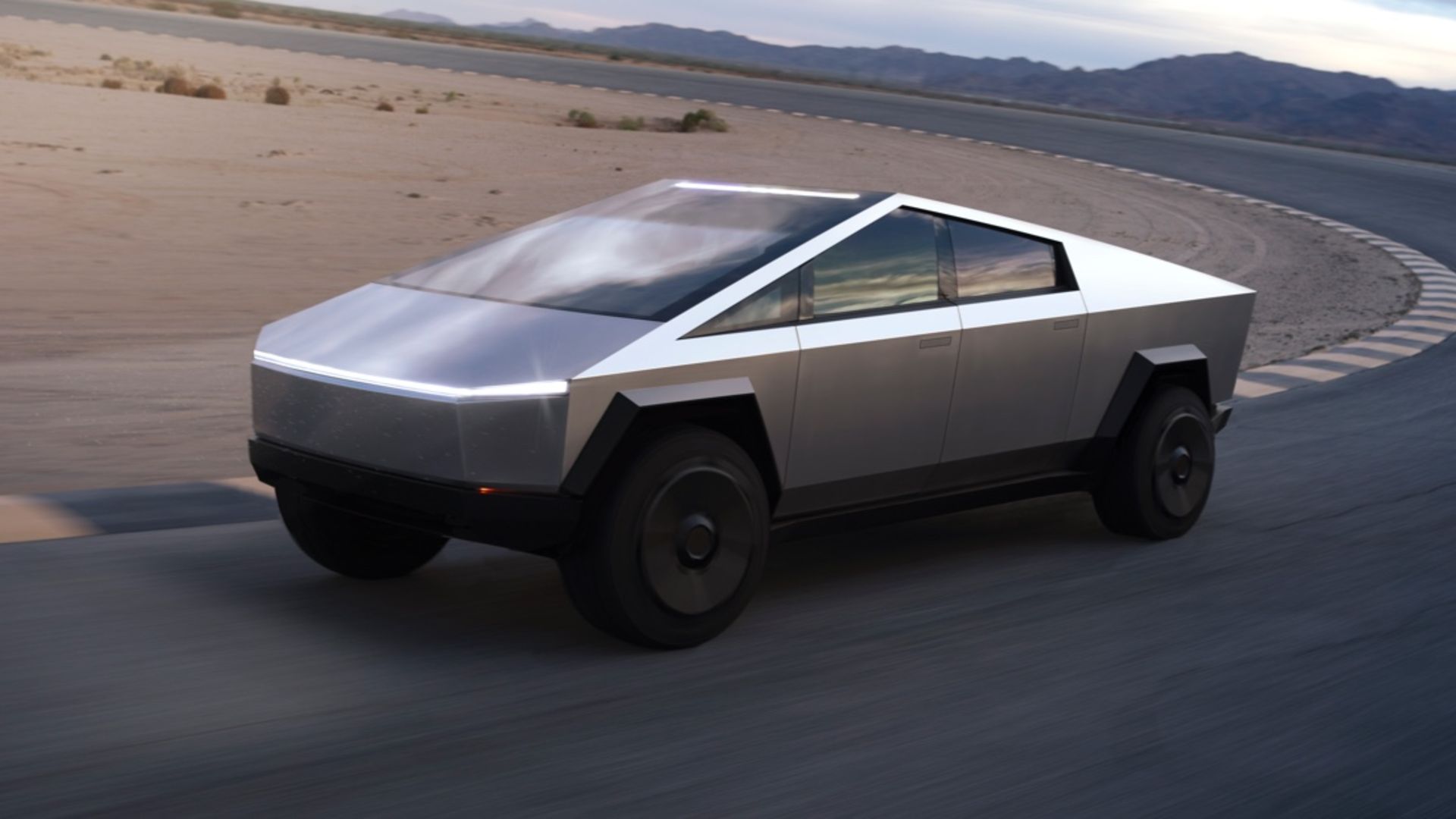 Looking like a vision from a sci-fi future, this is the new Tesla Cybertruck. Far from the Tesla-ified Ford F-150 pick-up we were all expecting, it seems to have been abducted from the set of the next Blade Runner film.

The reveal was genuinely frightening. As company boss Elon Musk exclaimed “So, I present to you: the Cybertruck!” smoke machines billowed and dystopian dubstep played. A YouTube commenter said “I thought four more Elons were going to get out of the truck”. At this point, would that surprise anyone?

What did surprise everyone was the styling. This jagged, otherworldly machine reminded us of the cuboidal on-board robot TARS from Interstellar. Musk’s claim that “it doesn’t look like anything else”, is certainly true.

Don’t think it isn’t serious, though. There are some very impressive real-world claims Tesla makes about the truck. Let’s first explore the stuff we’re used to talking about. 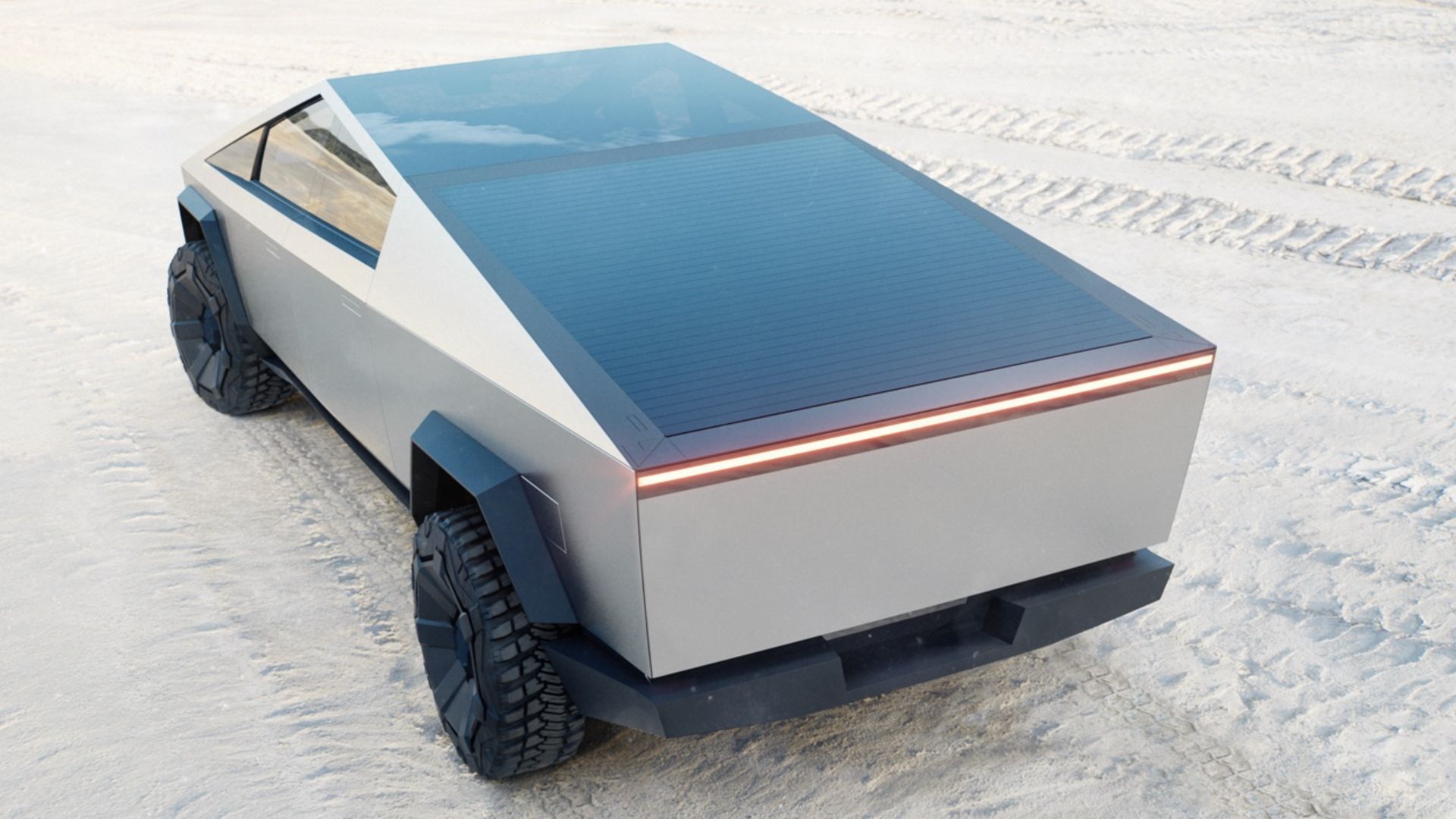 Range figures start from 250 miles for the single-motor RWD model, rising through the 300-mile dual-motor AWD to a massive 500 miles for the tri-motor AWD. Three motors suggests the top-end variant could be running a version of the PLAID powertrain Tesla has been testing at the Nurburgring in the Model S. However, no specifications for the battery sizes have been revealed thus far.

Performance ranges from a 0-60mph time of 6.5 seconds for the single-motor, to a scarcely-believable 2.9 seconds for the tri-motor. Towing capability goes from 3.4 tonnes to a massive 6.3 tonnes. The dual-motor, for the record, will hit 60mph in 4.5 seconds and tow 4.5 tonnes.

The load rating for the bed in all three models is 1.5 tonnes, with 100 cubic feet of capacity. Tesla claims it’ll be the most capable truck off-road, too, with a 35- and 28-degree approach and departure angles.

Musk also mentioned an adjustable 16 inches of ground clearance, achievable with the full air suspension and the adaptive damper system. It can drop the rear for loading, which he demonstrated with their ATV ‘Cyberquad’, as it drove up a ramp onto the bed. The truck also has an on-board air compressor, giving the air suspension system a second use.

How much will the Cybertruck cost? 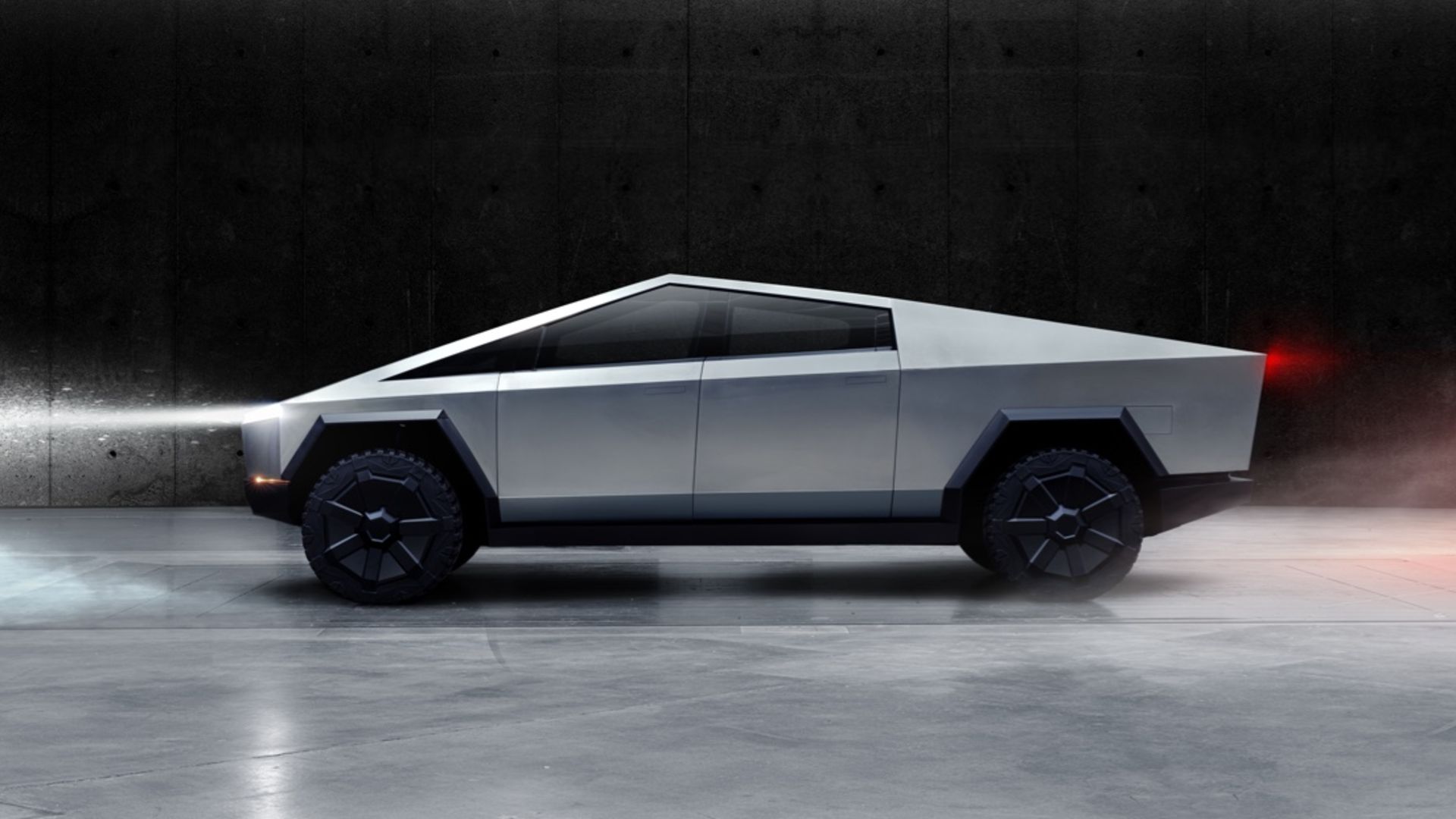 This is an area where trailblazing electric cars tend to come unstuck. Not so the Cybertruck. For the single-motor with 250 miles of range, Tesla claims you’ll pay the equivalent of £31,000 before any grants. That rises to £38,700 for the dual-motor, and £55,200 for the tri-motor. These are, of course, dollar prices converted to pounds at the current exchange rate. But you get the idea. 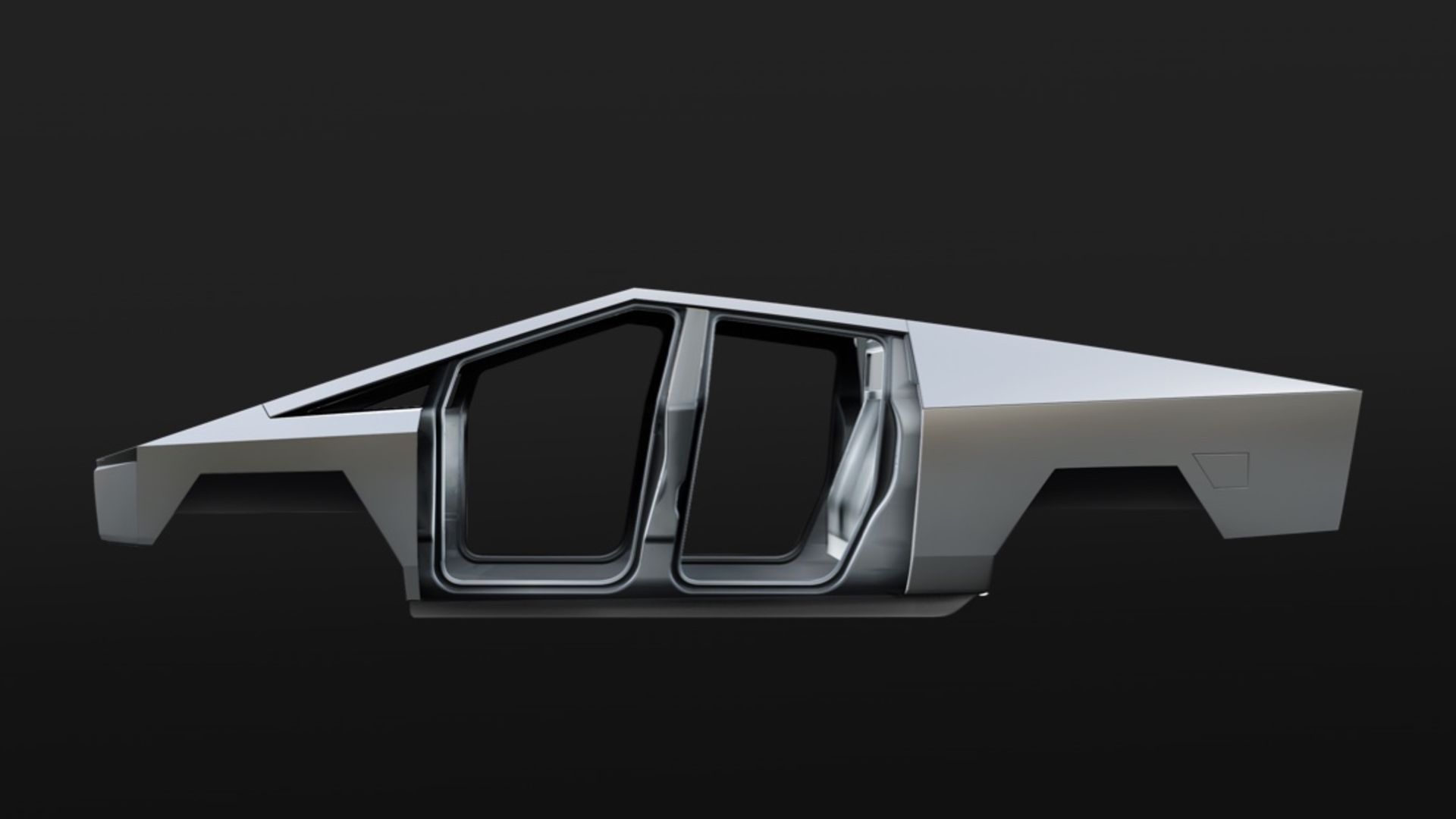 Much as the world likes to give Elon grief, and much as he gives it cause to, he raised some interesting points about the current state of pick-up design. Fundamentally, it hasn’t changed for decades. Musk described the body-on-frame and bed-on-frame as “carried cargo, like a sack of potatoes. They don’t do anything useful”.

Looking to get away from that, the Cybertruck uses an ultra-hard cold-rolled stainless steel exoskeleton. The mass is on the outside – what you see, most of the bodywork, is also the chassis. A major benefit of this is strength, as Musk spent much of his presentation demonstrating with sledgehammers and shooting videos.

Also new is the Tesla armour glass, referred to by Musk oh-so-humbly as “see-through metal”. Although a sample survived a live drop test very well, the glass on the truck itself didn’t prove so strong. Musk didn’t like the taste of humble pie, shouting expletives as the glass smashed. “There’s room for improvement,” he followed. 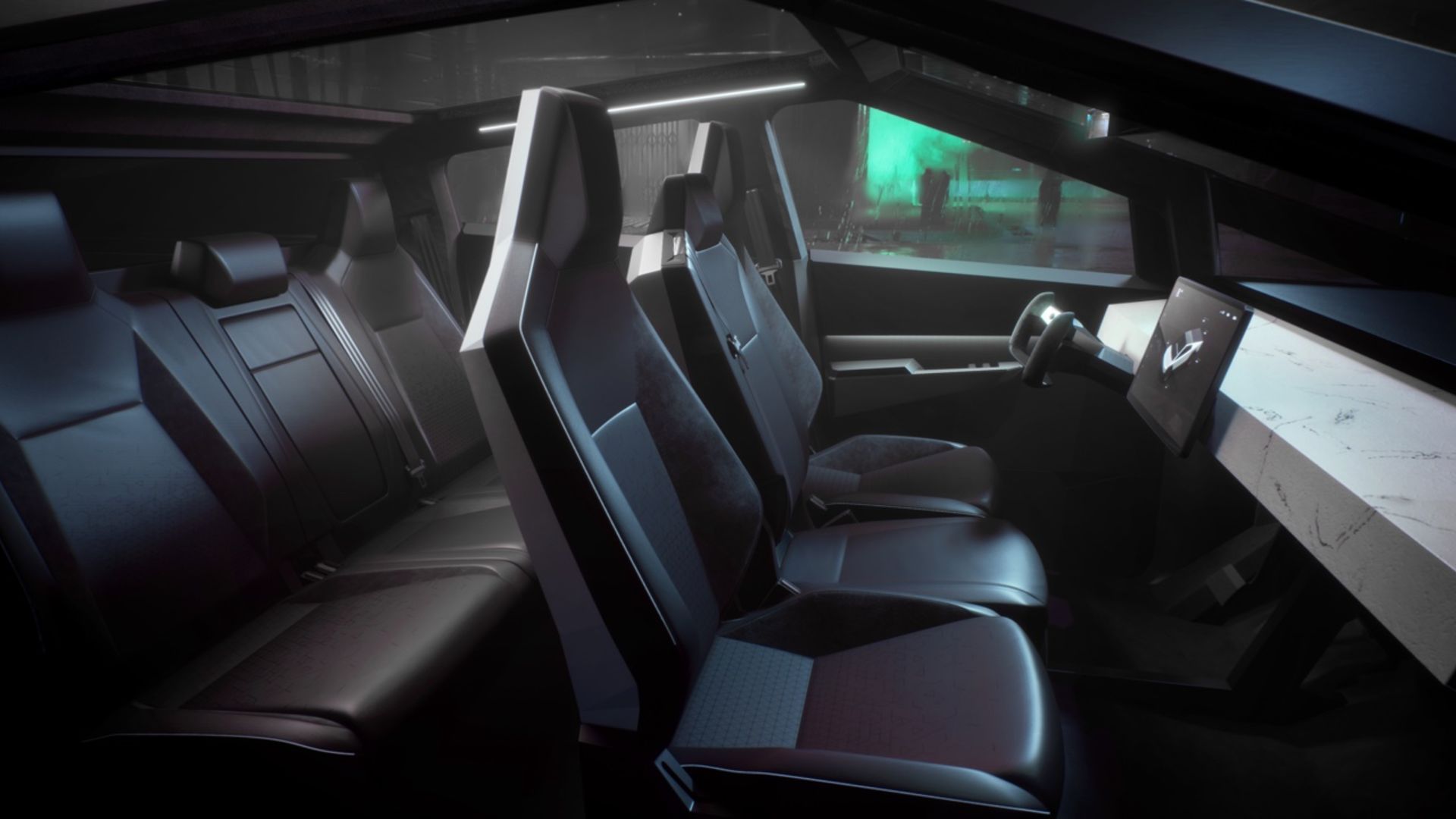 Other observations? That slab top that goes from the windscreen to the end of the loadbed appears to roll and fold away like shutters. In the ATV demonstration, it rolls into storage at the point where the bed meets the cabin.

The inside is tame by comparison with the exterior. Seating for six is available, as per pick-up convention. The steering wheel looks to be borrowed from the Roadster supercar (still unreleased) and the 17-inch screen is very much in the style of the Model 3. 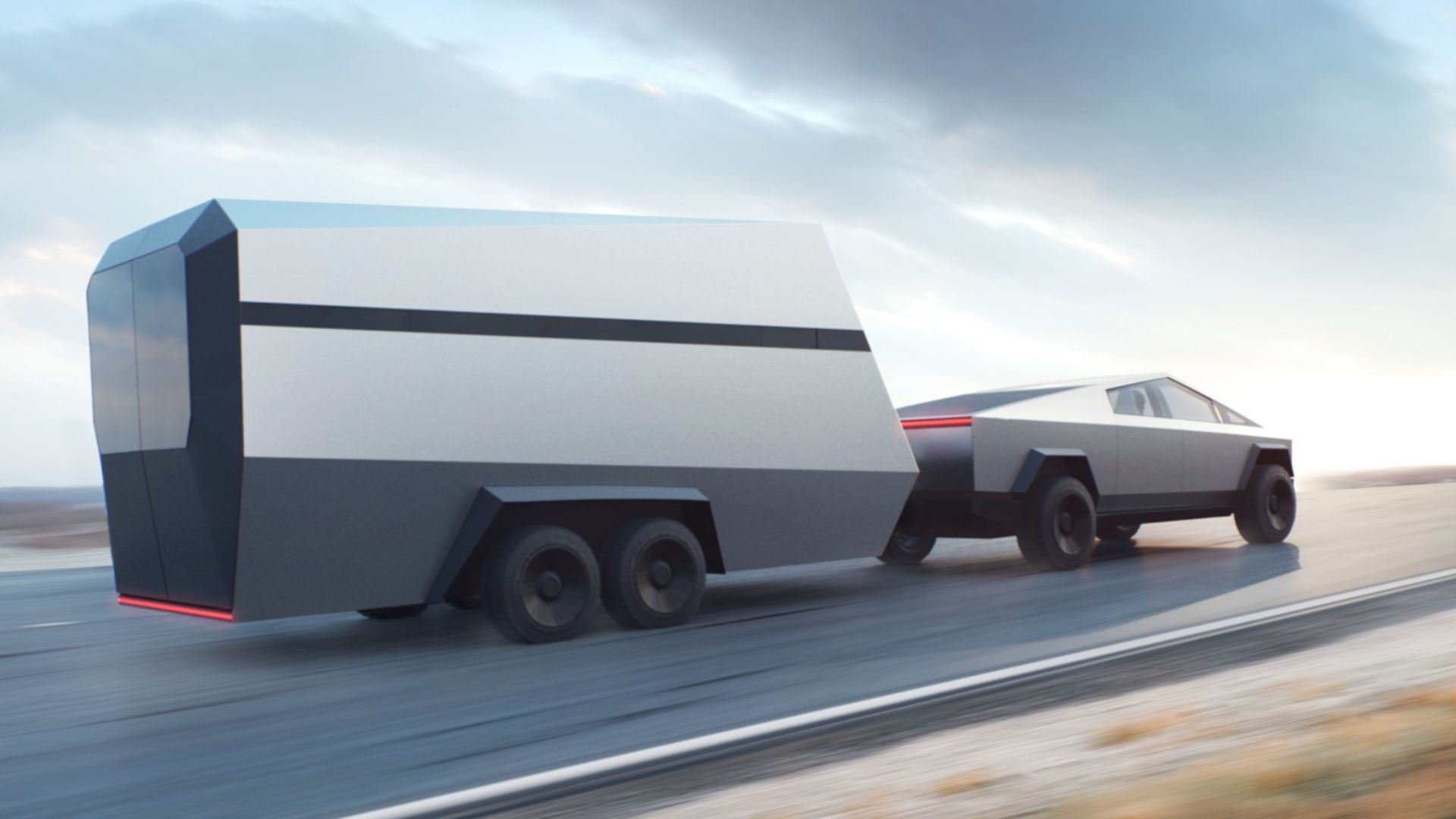 We do have some queries. For one, the design doesn’t look too pedestrian-friendly. We’d love to hear what Euro NCAP thinks of it, and indeed how it performs in a wind tunnel. Also, given the ‘chassis is the body’ design, how much will it cost to repair after an accident? Food for thought. That’s all to come, though.

For now, Tesla has yet again reminded us why it’s so often referred to as a ‘market disruptor’. Mock Musk and his endeavours all you want, but he knows how to grab a headline. He also seems more like a Bond villain with every passing day, and he’d probably take that as a compliment.

Abarth is no longer simply about go-faster versions of the Fiat 500. Since 2016, the Turinese tuner – treated as a standalone manufacturer within...
Read more

How Lexus defeated ‘the best car in the world’

In 1989, Lexus unveiled the LS 400, a luxury car aimed squarely at the Mercedes S-Class. Thirty years on, we celebrate the brilliance of Circle F.
Read more

Hans Zimmer, composer of the Batman and Superman soundtracks amongst many others, is working on designing the vocals of future fast electric BMWs
Read more

Sad you can’t buy a new Defender any more? How about a Shogun instead…
Read more