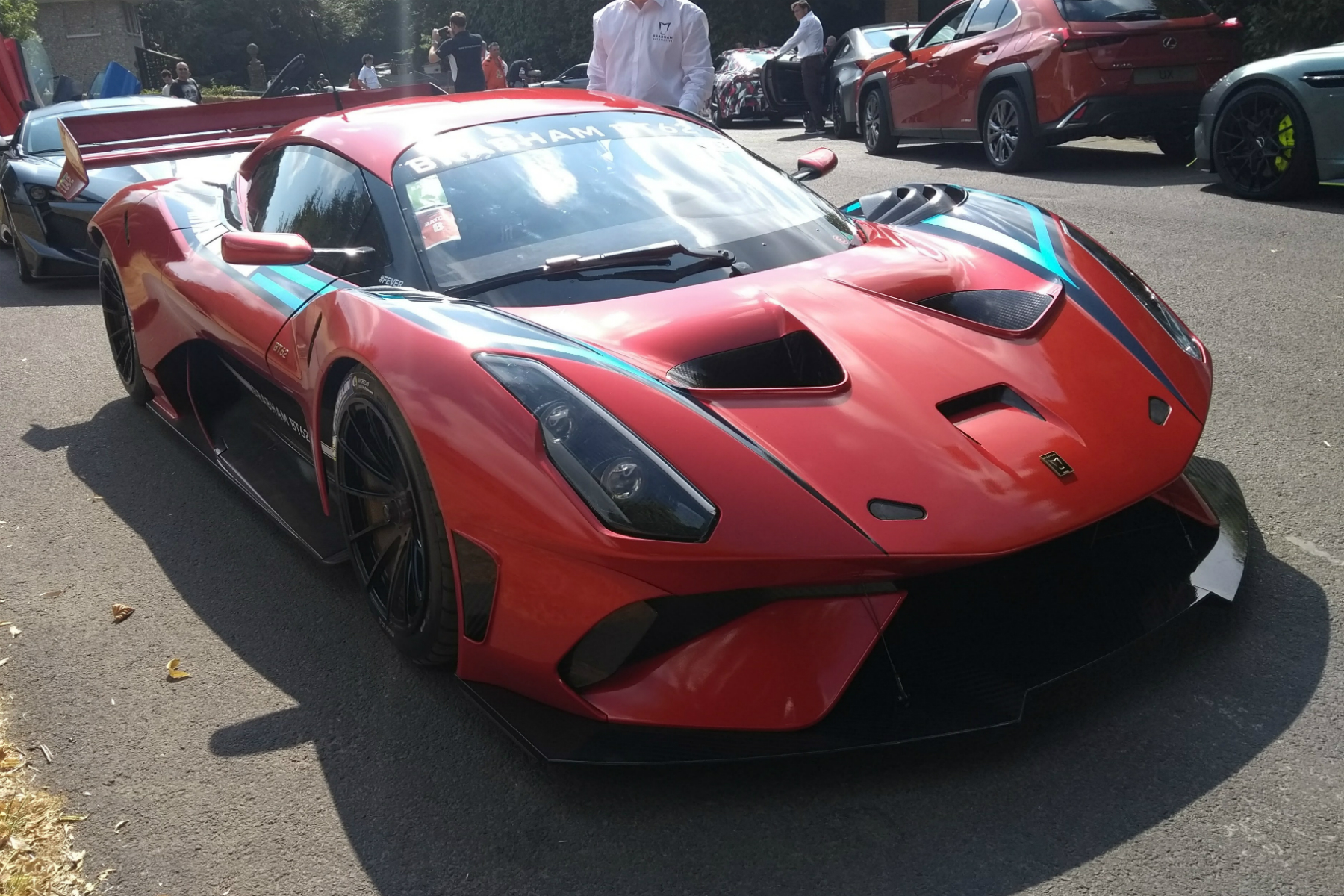 The last racing car to compete wearing the Brabham name was the BT60 in 1991. The last Brabham win was in 1985 at Paul Ricard, with Nelson Piquet at the wheel of the BMW-powered Brabham BT54. The first and last F1 world championship won in a car bearing the driver’s name was in 1966, with Sir Jack Brabham at the wheel of his Brabham-Repco BT19.

For a name so prominent throughout Formula 1’s golden years, and so dominant for long stretches within, Brabham has lain fallow for far too long.

David Brabham, son of Sir Jack and a proven top-class racer in his own right, has been of that opinion for many years. So, after his Le Mans win in 2009, he set about the difficult task of building a new car. Nine years on, David finds himself on the start line on the hill at 2018’s Goodwood Festival of Speed.

More than a tonne of downforce 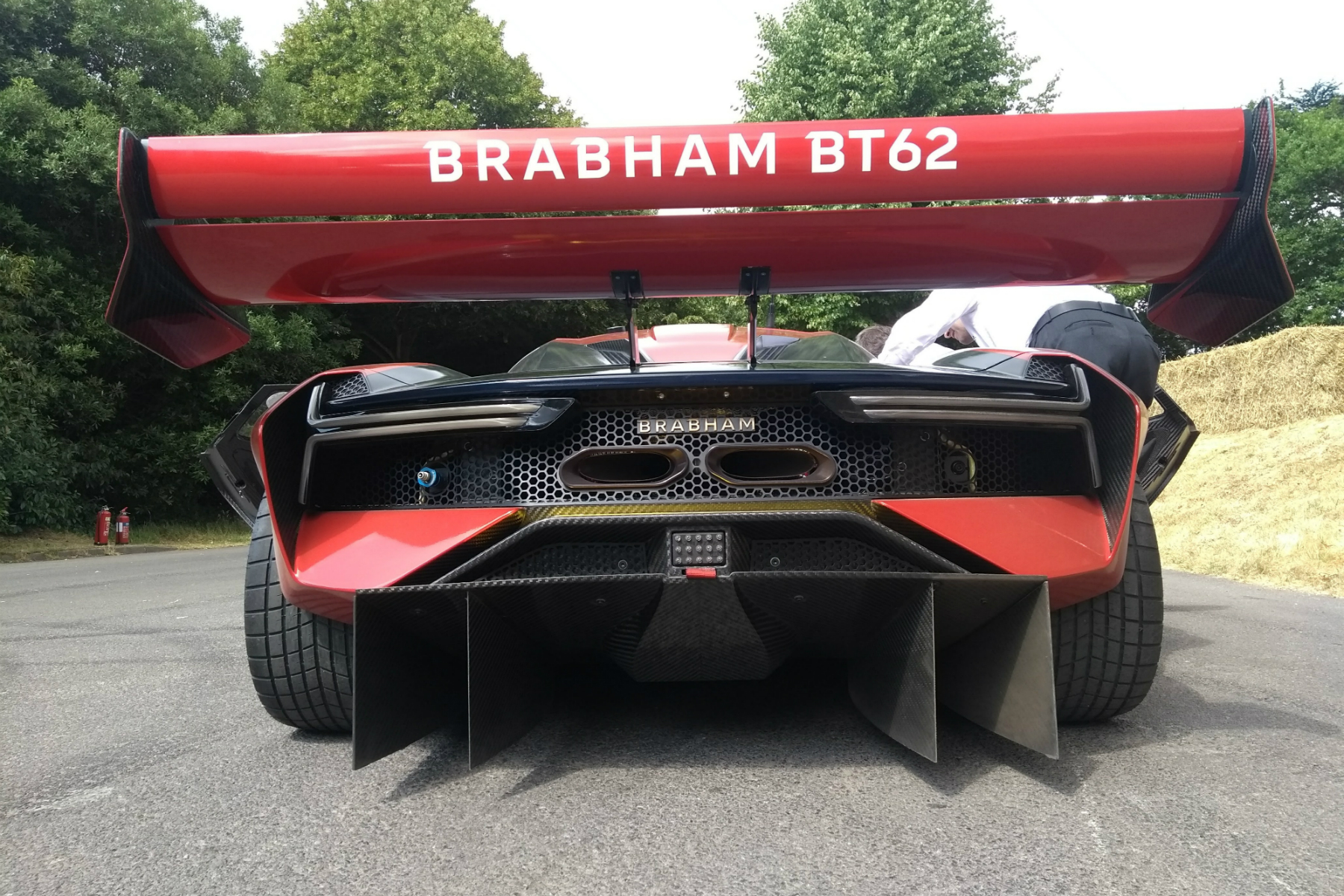 In the shadow of 1,200kg of downforce’s-worth of enormous rear wing, ‘Brabham’ is proudly splayed across the centre of its rump between distinctive LED light strips, above the exhausts and a gargantuan diffuser. The dream is alive, the Brabham BT62 is ready and we called shotgun for its first properly quick run.

Not before giving it a push up to the start line, mind. David was keen to stress that the BT62 was full race-spec. That means it’s most comfortable revving hard and going fast, not necessarily trundling up a West Sussex driveway in the most expensive traffic jam in the world. Especially given it was due to make eight runs that day, with more of the same for the Friday, Saturday and Sunday.

Still, a bit of hard labour was no price at all for what was a curious insight into the Brabham BT62 experience. The view through the slashes in the front haunches to the racing wets as we pushed against the A-pillar, a first glimpse into the cabin through the tiny door aperture – all aspects of the initial meet-and-greet experience that Brabham’s customers could well have before their first run on-track.

The car’s in position and we clamber aboard, contorting into shapes we probably ought to have stretched for first. As we flop into the purposeful race seat and get buckled in, a surprisingly relaxed-looking David Brabham greets us. Full-face lid on with the visor up a shade, there’s still no mistaking him for anyone else. A quick natter before he stokes the 5.4-litre 710hp V8 into life, we just had to ask how it felt to be in a new Brabham, ready to run at FOS. “It’s an incredible feeling to be here showing it off at Goodwood. It’s been such a journey, from getting the name back to bringing this car to life,” says David. 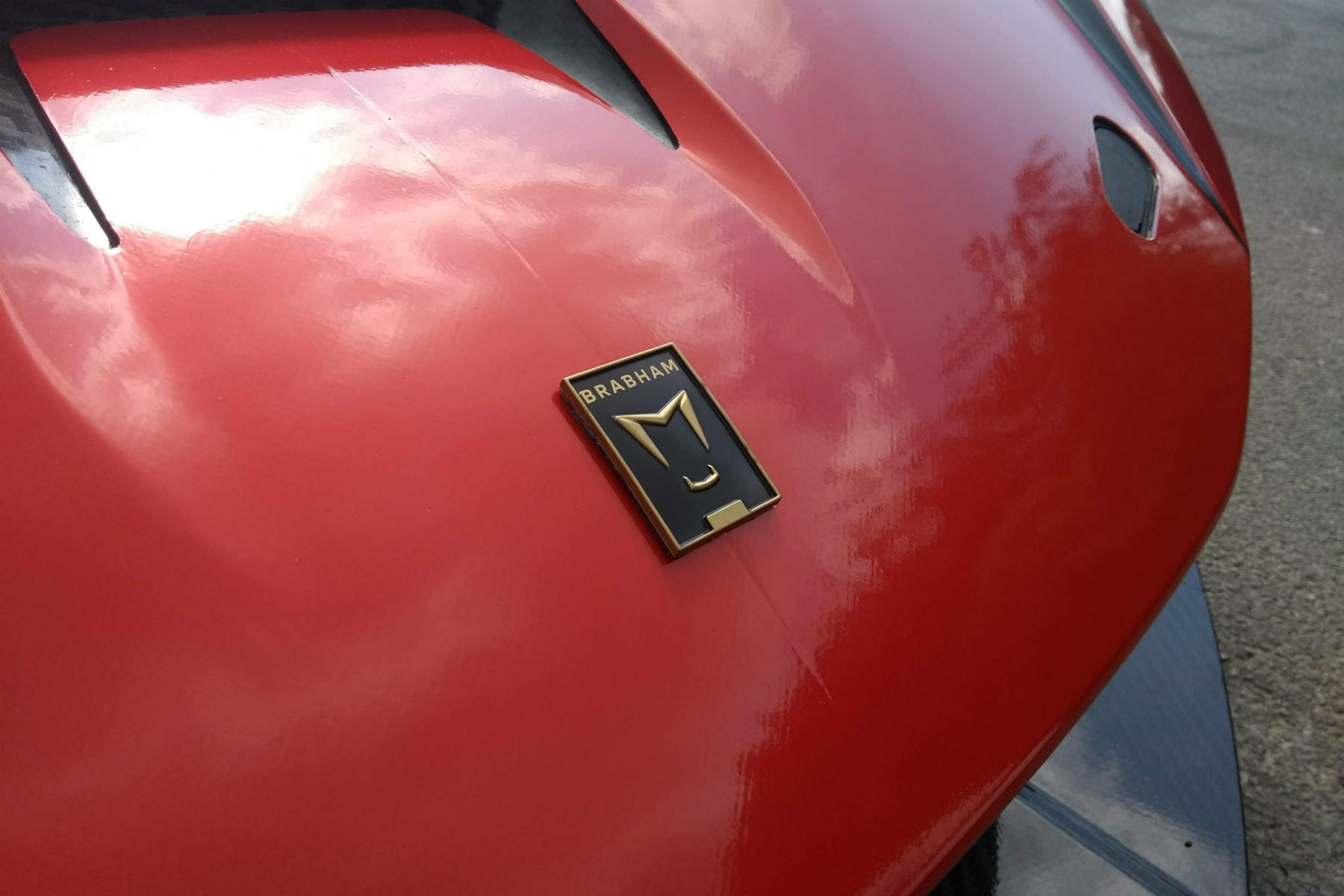 Introductory formalities out of the way and, with the start-line beckoning, David pushes the button. As displays flash into life, the engine is a raucous assault on the car and its occupants, even at start-up and idle.

David eases up on the clutch from the start, but from then on it’s flat-out, with the nose tucking neatly into the first corner, kicking up a token puff of dust. It’s utterly welded to the tarmac, with the V8 howling as David clatters through the straight-cut gears. The central sculpture appears and disappears from view, as if the world were in fast-forward. The adoring crowds are an anonymous blur – surely taken aback by a lot more noise than an average supercar emits.

Under the bridge and towards the hump before Molecomb, the car brakes straight and true without so much as a twitch of the rear chasing us round. Back on the power and it’s up through the gears towards the flint wall. The incline does nothing to steady the rate of acceleration – the engine is just so strong.

With less than 1,000kg to shift, it’s no surprise. As we howl past the flint wall it occurs to us how this noise is what’s been sorely missing from most GT grids, and indeed most supercars of late. It’s just such a raw thing, with vicious purpose enough to make any twin-turbo McLaren fade into the background. An authentic representation of what a de-restricted GT racer could truly be.

Barrelling up the long sweeper towards the finish, the speed really builds with the V8 bellowing through the trees. As we emerge from the forest into the top paddock, the rest of the world’s mightiest supercars sit dormant after full-on runs. We pull up, the car shuts off and we take a breath. David is quiet but visibly excited. This is a huge moment for him and his family name. Seasoned drivers bound over to the Anglo-Australian racer to congratulate David on the car, ask him how it was and have a poke around. Cue a lengthy conversation about the virtues of running wets versus slicks on the FOS hill… 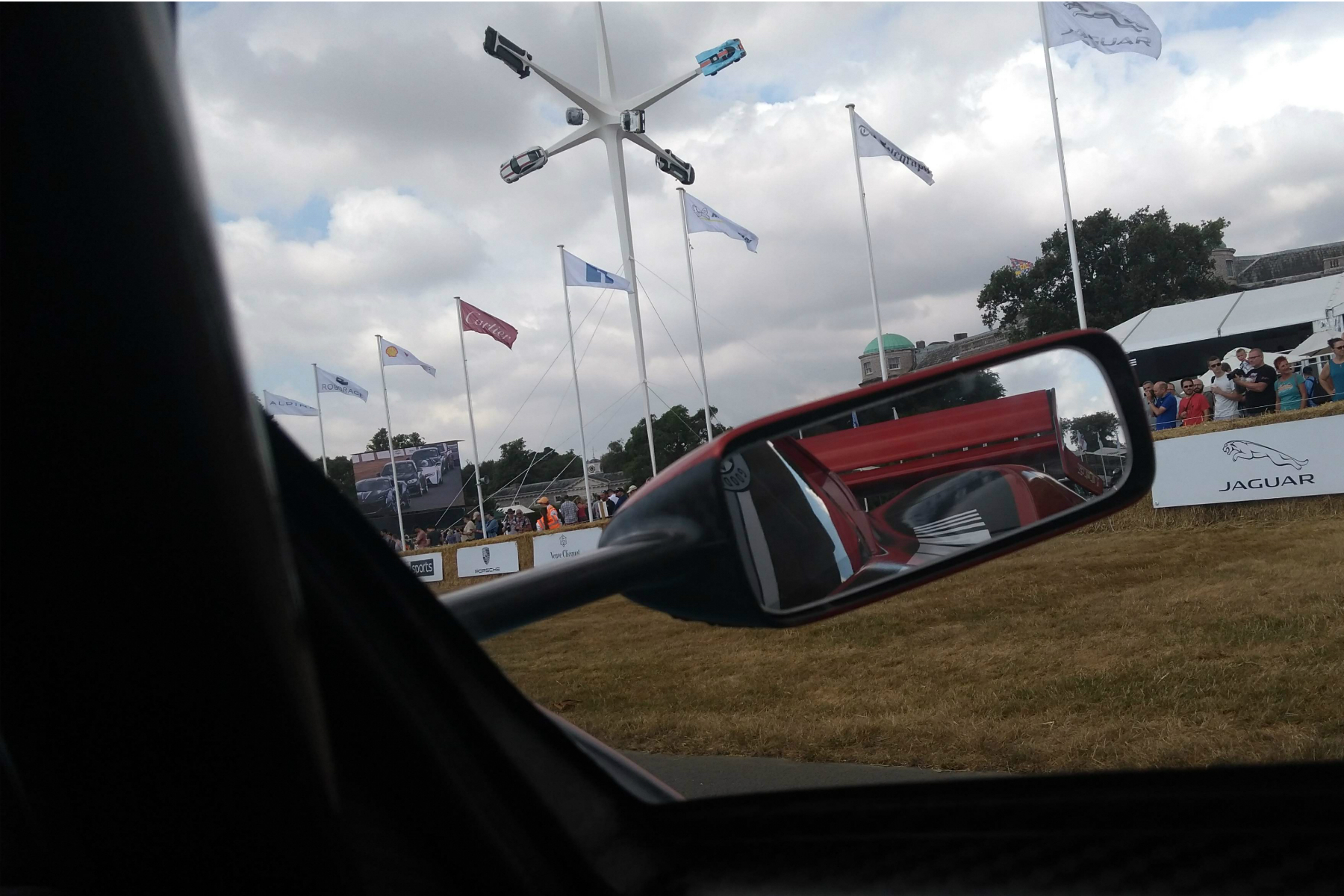 They disperse and there’s a moment of calm. We ask what cars inspired the Brabham driving experience. “One car I remember that was great to drive was the Aston Martin GT1 car – the DBR9. In terms of performance, balance and feel, we wanted this to be somewhere between that and a P2 car,” said Brabham.

On the future of the marque, David was positive, with an excellent response to BT62 since its May reveal.

“The response has been phenomenal. We only came to market in May when we revealed the car and we have several letters of intent. It’s now that we’re getting through them and getting orders booked in.

“We’ve got a product plan and we want to go racing, because that’s what Brabham is all about. Realistically we could be at Le Mans in 2021, maybe 2020. I’d love to see a Brabham hurtling down the Mulsanne. It would be incredible to see a Brabham win in a Brabham car once again.”

He’s not shy about his ambitions, then, with the “ultimate goal” being an all-star car and driver win at Le Sarthe to match Black Jack’s unique F1 championship achievement in 1966. The road cars are along the path that David hopes will lead to that. Sell on Friday, race on Sunday…

The car certainly has potential. So many marques come and go – few, admittedly, with a name as steeped in history as Brabham – but fall short, usually financially, before a car is even ready to demonstrate.

That the BT62 is in this almost-fully-developed state, with hungry customers waving cheques, bodes well for Brabham Automotive. This is an idea that’s been rattling around in David Brabham’s head for the better part of 15 years – time enough to really nail down what he wants and how to get it.

The BT62 delivers the raw racing car experience, the heritage and the passion that few emerging names can. We’re confident Brabham will go on to deliver on road and track in years to come.