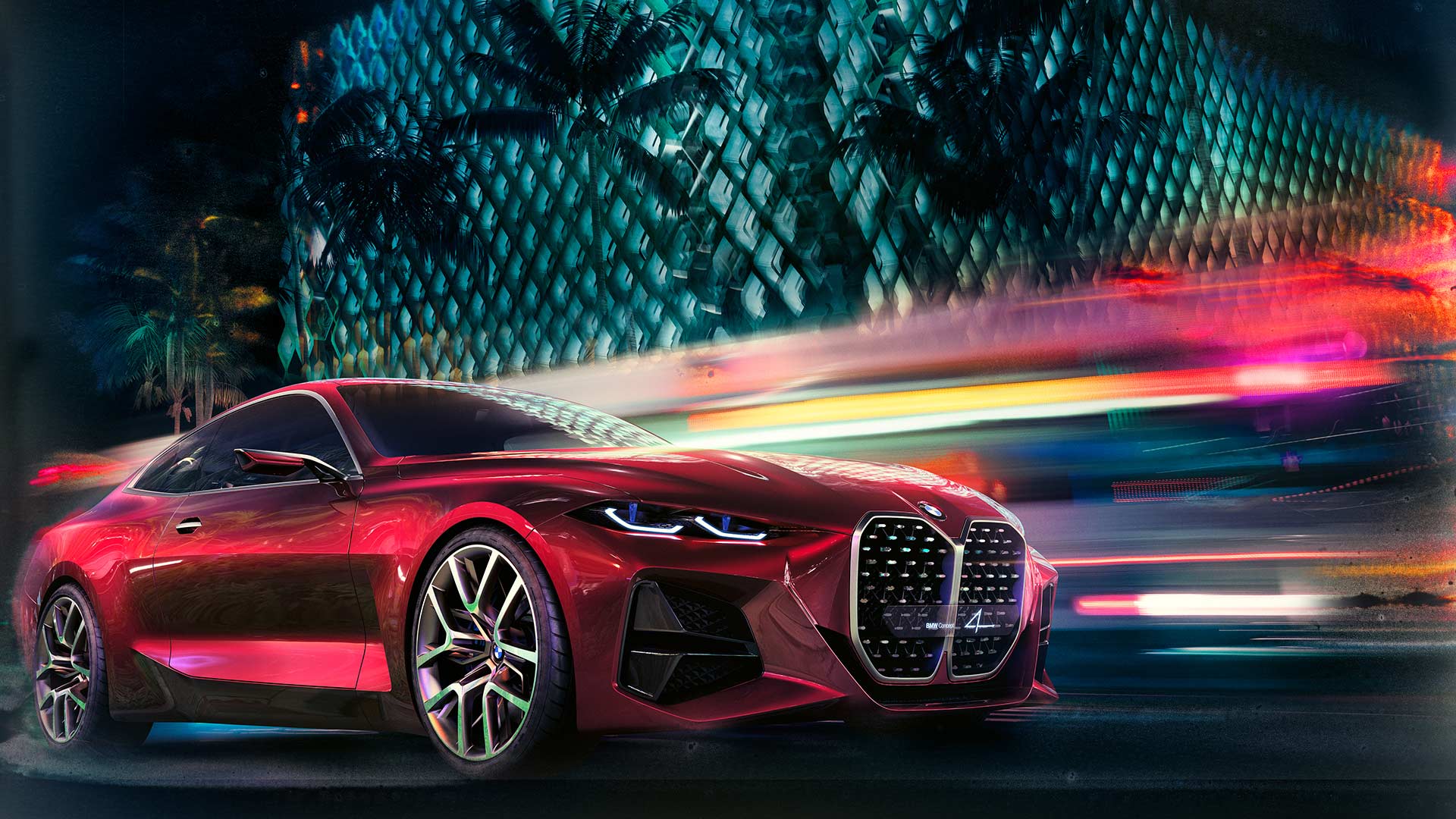 BMW has revealed a startling new concept car at the 2019 Frankfurr Motor Show. The Concept 4 is a less-than-subtle hint about how the next 4 Series will look.

Although only a show car, the Concept 4 is said to be an accurate representation of the finished 2020 4 Series.

Intended to combine futuristic technology with traditional BMW design, there is likely to be one major talking point in Frankfurt…

Expect to be grilled 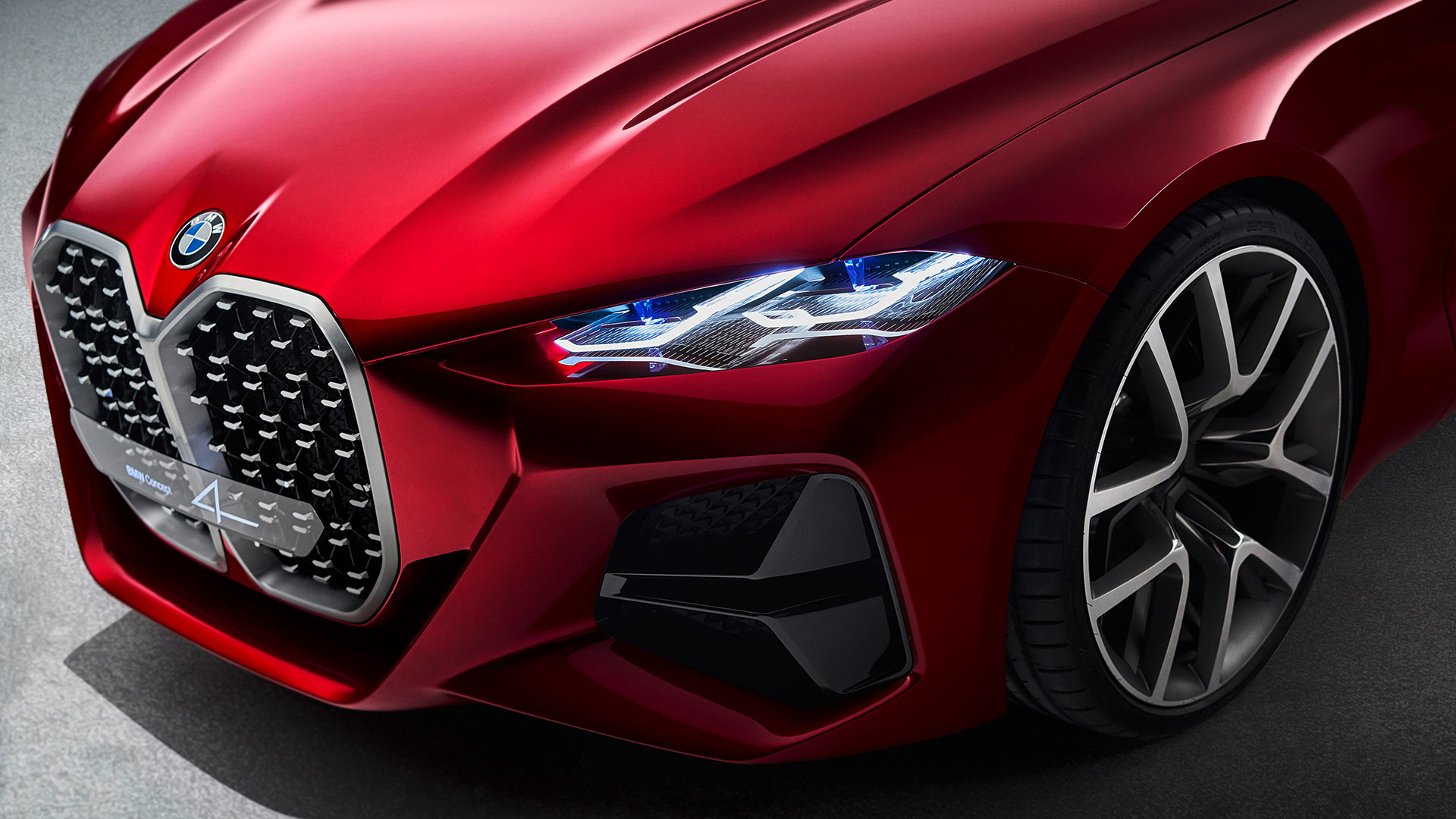 Although we have seen the giant BMW kidney grille applied to SUVs and saloons, this is the first time it has made an appearance on a coupe.

The gaping mouth of the Concept 4 is unashamedly vast. BMW says the vertical grille is inspired by the classic 328 sports car, or the 3.0 CS coupe from the 1970s.

In creating the grille, BMW has incorporated special horizontal trim details. The grates inside it, and the air intakes, are formed from an array of tiny ‘number 4’ structures. 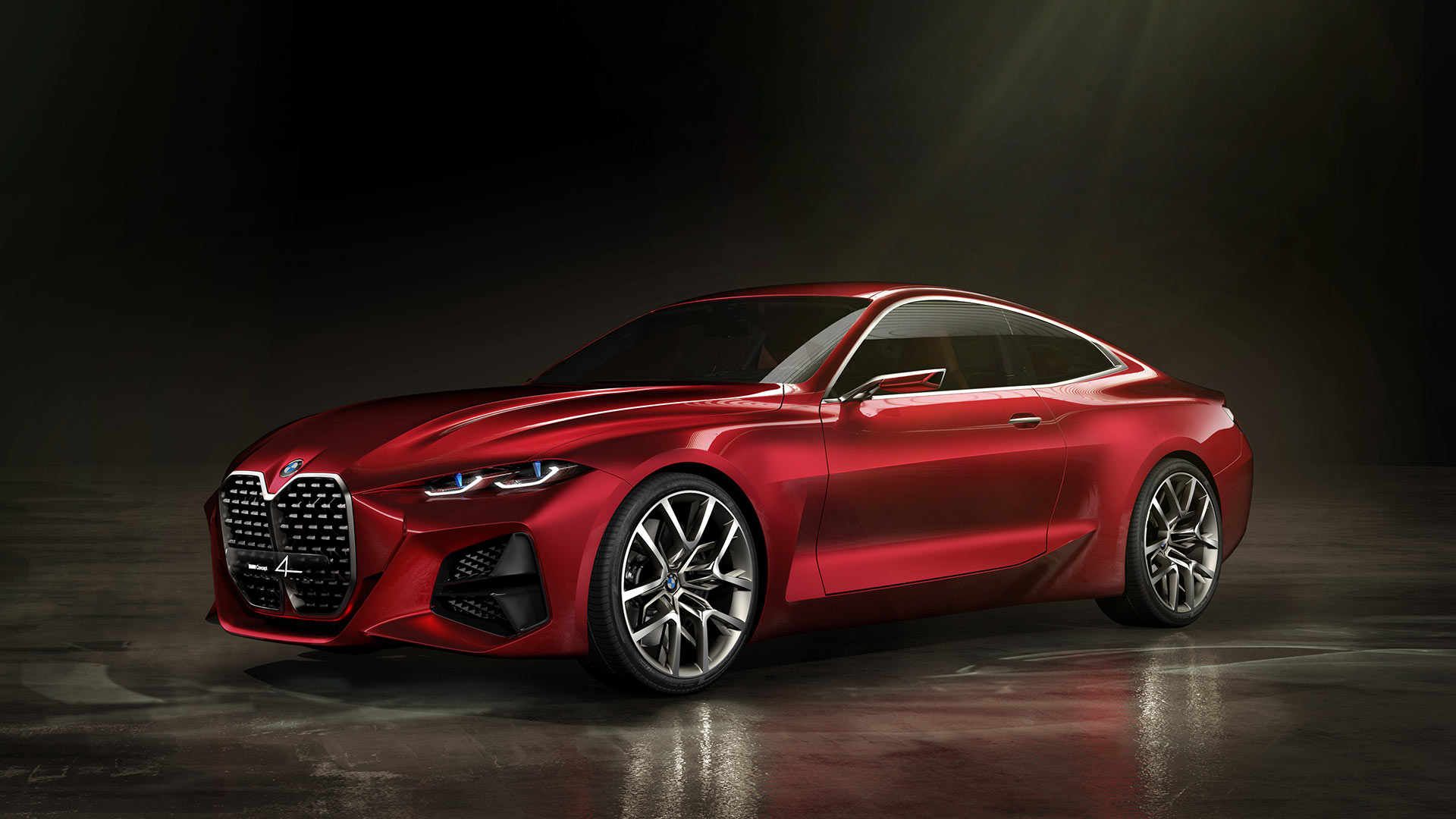 According to Domagoj Dukec, head of BMW design, the kidney grille has “always been a signature feature of BMW cars. The BMW Concept 4 presents a confident and classy take on this iconic feature. At the same time, the BMW Concept 4 offers a look ahead to the expressive face of the 4 Series range.”

Just as dramatic are the LED headlights which, unusually, feature no cover over the lighting elements. This makes them more prominent, although don’t expect the production version to follow suit.

The shape of the kidney grille also feeds into the heavily sculpted bonnet, flowing into the flanks of the Concept 4. 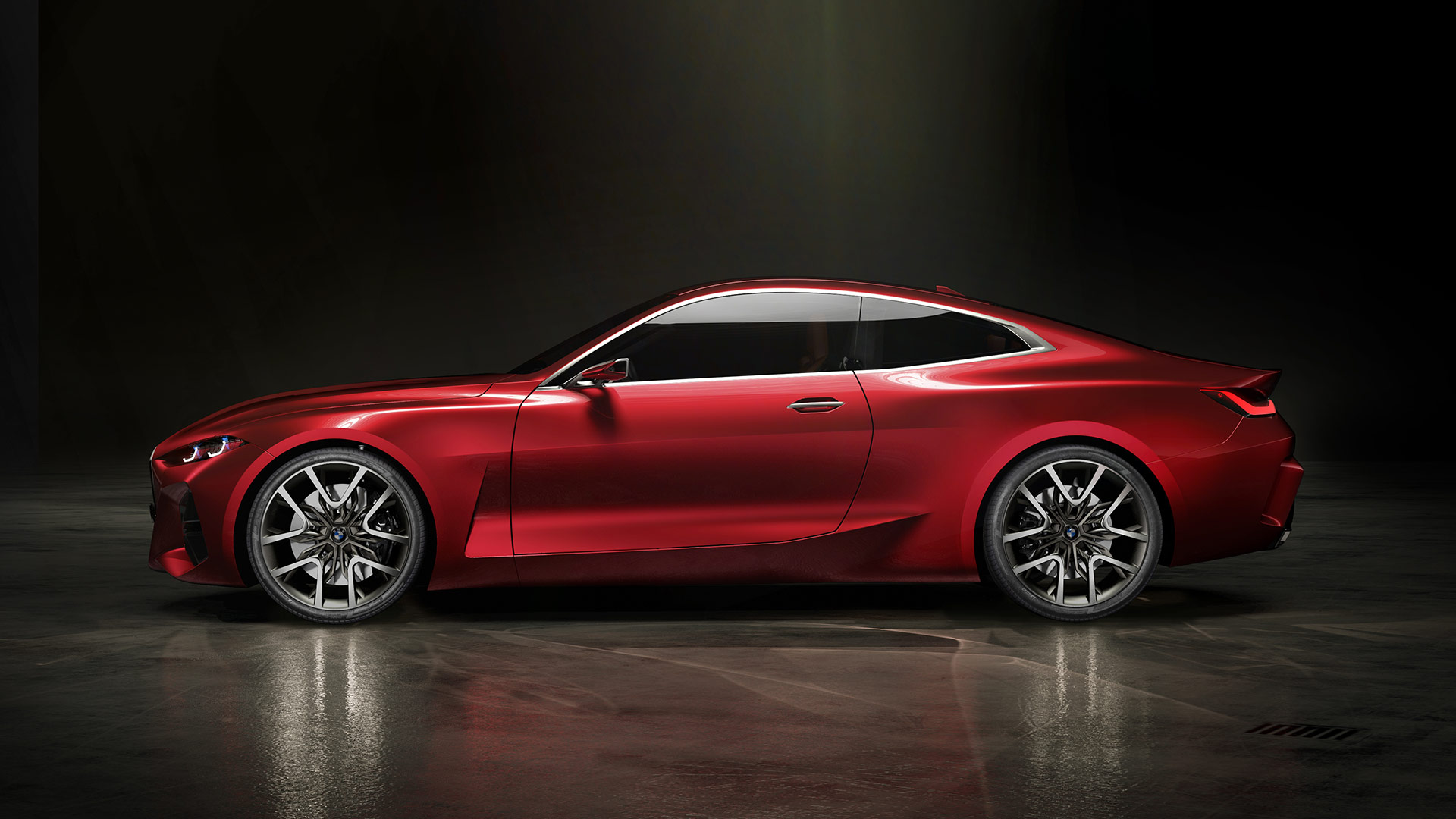 Viewed from the side, the Concept 4 demonstrates classic BMW coupe proportions. A long nose extends into a sweeping roofline, ending at a truncated tail.

The fancy Forbidden Red paintwork is used to highlight styling features, while the 21-inch alloy wheels feature an intricate internal pattern. Other highlights include the side mirrors, which seem to emerge from the aluminium window surround and feature tiny BMW logos. 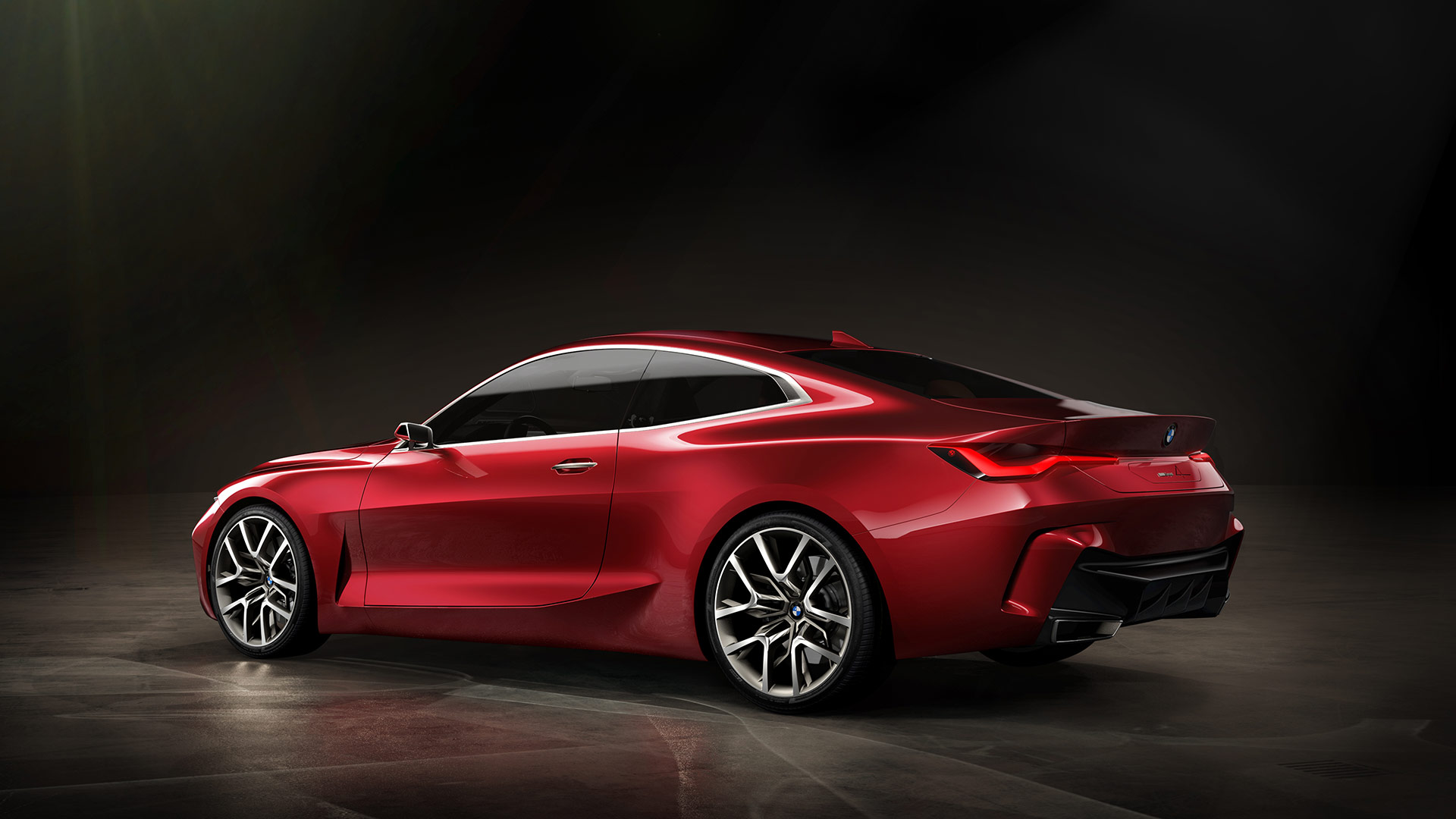 The rear looks similar to the recent flagship 8 Series coupe. BMW has used LED taillights to create its L-shape ‘light signature’, with the actual pattern said to resemble a heartbeat.

Intended solely to show off exterior styling, BMW has not released details of interior or engine options for the next 4 Series. However, we can expect to see the same range of petrol, diesel and plug-in hybrid powertrains as the current 3 Series saloon.

BMW will launch the production 4 Series in the middle of 2020.