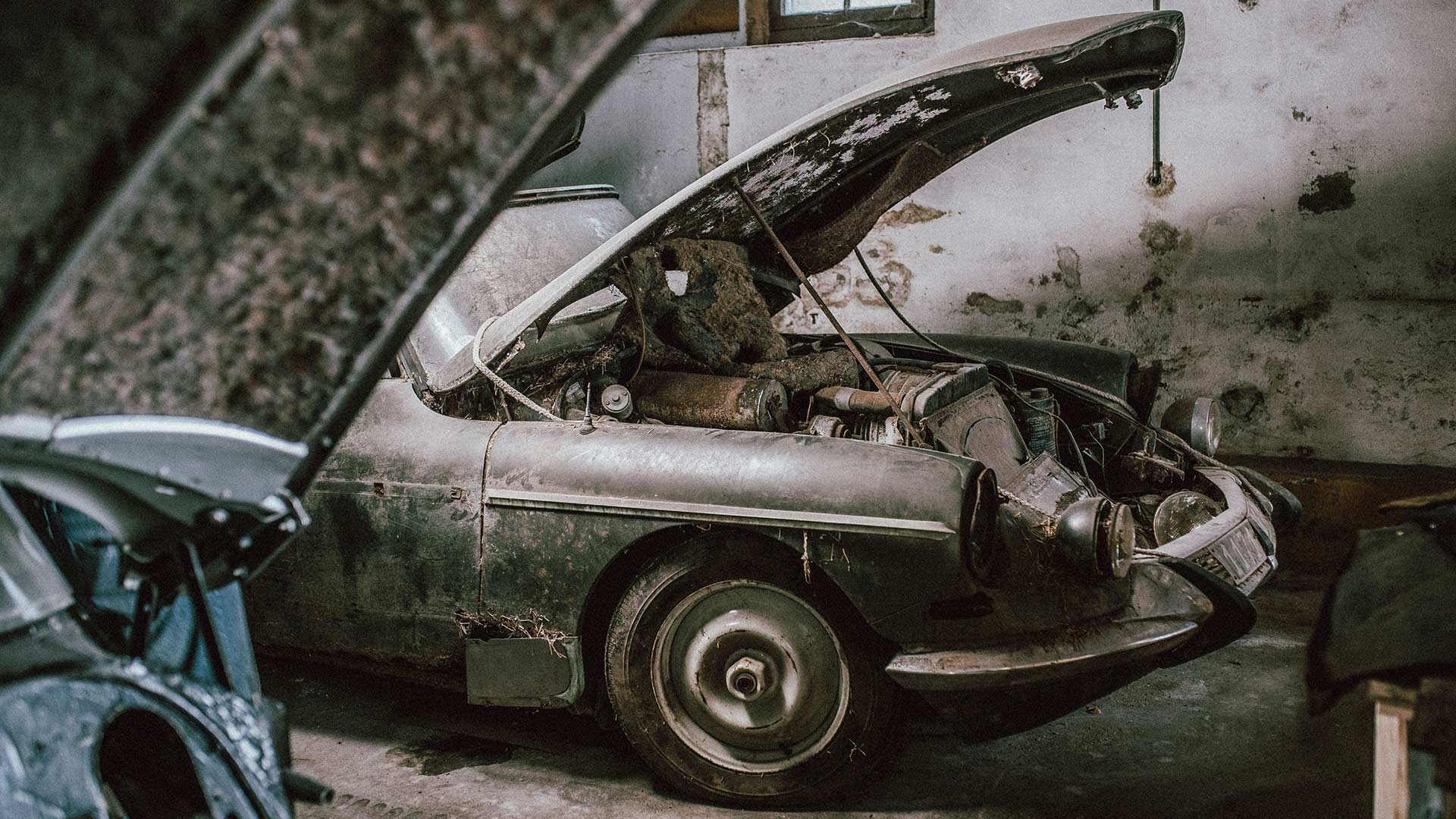 The Retromobile 2020 event is happening right now in Paris, France, with car fans coming together to celebrate the first major classic car show of the year.

French auction house Artcurial is in charge of the official Retromobile auction, and has an eclectic catalogue of cars, tractors, motorcycles, and even boats up for sale.

A large contingent of the cars on the auction list are recently discovered barn finds, or unrestored examples of rare models. We have profiled a selection of vehicles that are wearing their age and experience on show, ahead of the sale on Friday. 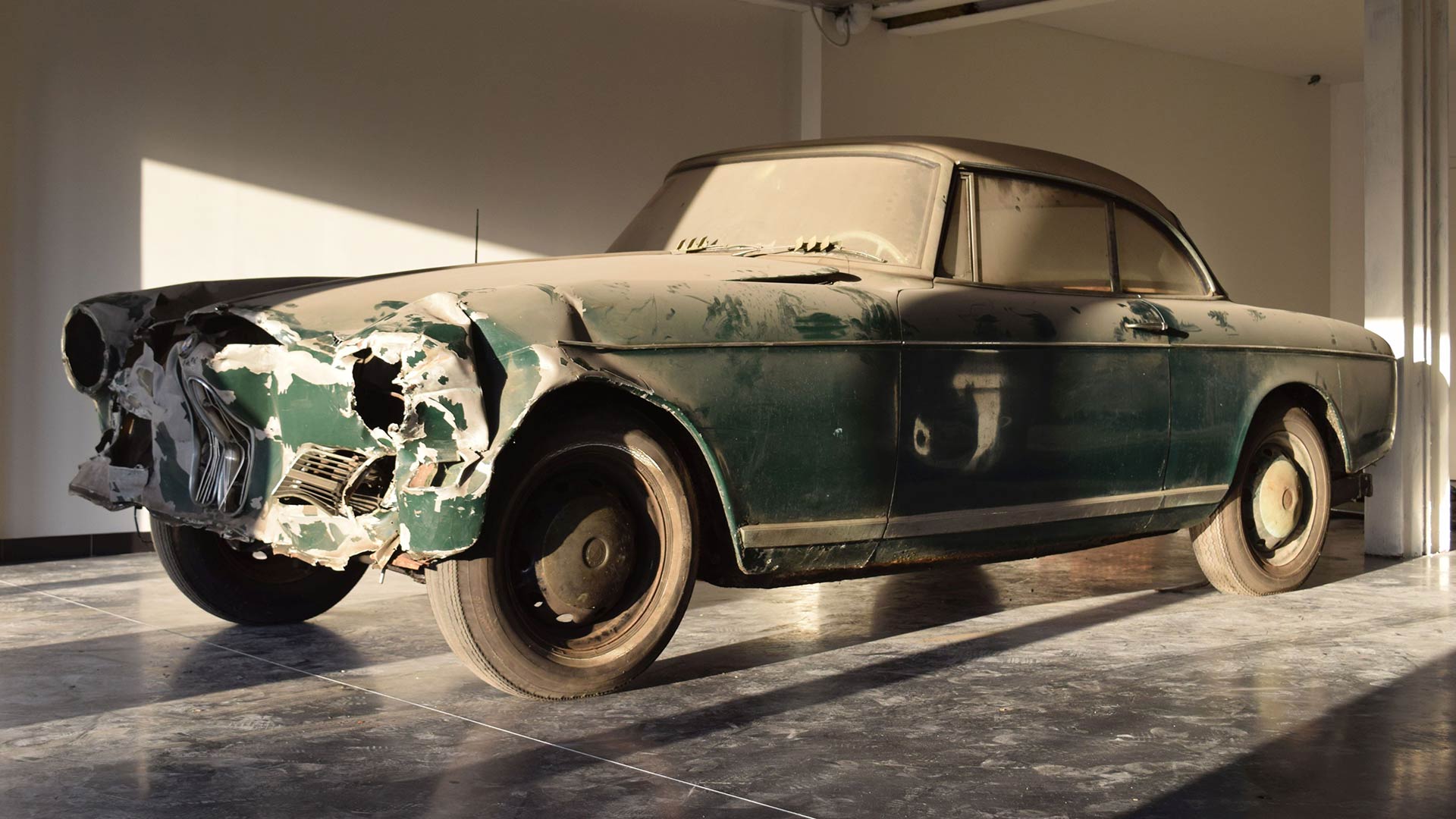 Developed alongside the famous BMW 507 roadster, the 503 was intended to help the company’s sales in the United States. Like the 507, the 503 was prohibitively expensive when launched. Only 413 examples were sold, leaving BMW suffering substantial losses.

Just 273 of those cars were coupe models like this one, powered by BMW’s 3.2-l V8 engine. Originally sold to a Belgian owner, the car was later bought by a doctor who suffered an accident whilst driving the 503 in 1976. The good doctor then traded the BMW in for a Jaguar, leaving the 503 to sit at a dealership until 2007 when it was bought by the current owner. 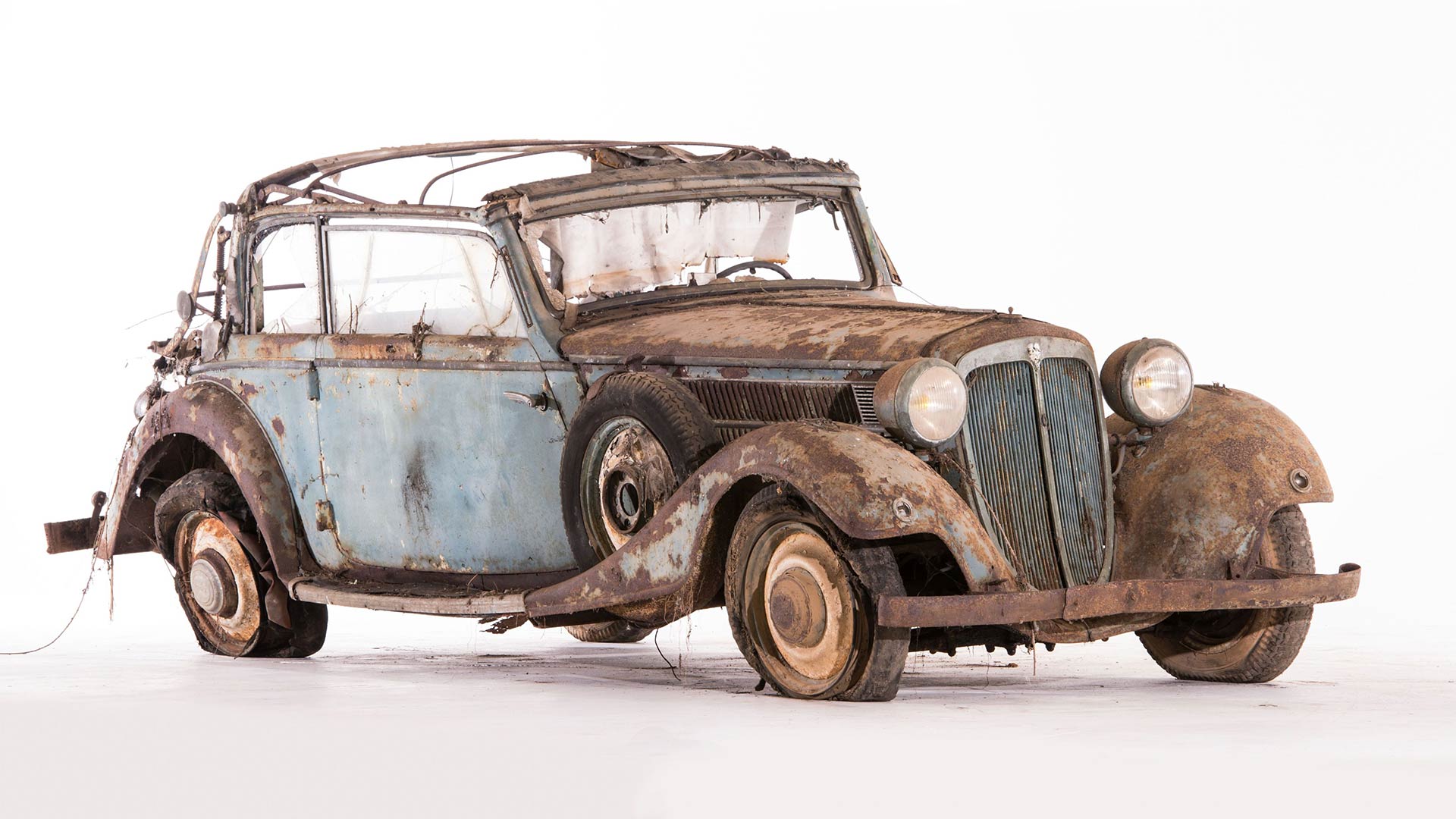 If repairing the previous BMW 503 seems too easy, then this vintage Audi Front should prove to be more of a challenge. Made when the Audi brand was still part of the Auto Union company, the Front was notable for making use of a front-wheel drive layout compared to its rear-wheel drive contemporaries.

A 2.25-l inline-six engine shows this to be a later version of the Front, which saw output rise to a rather modest 54 hp. Clearly in need of extensive repair and restoration, Artcurial notes that the original manufacturer’s plaque is missing, as is the dynamo. 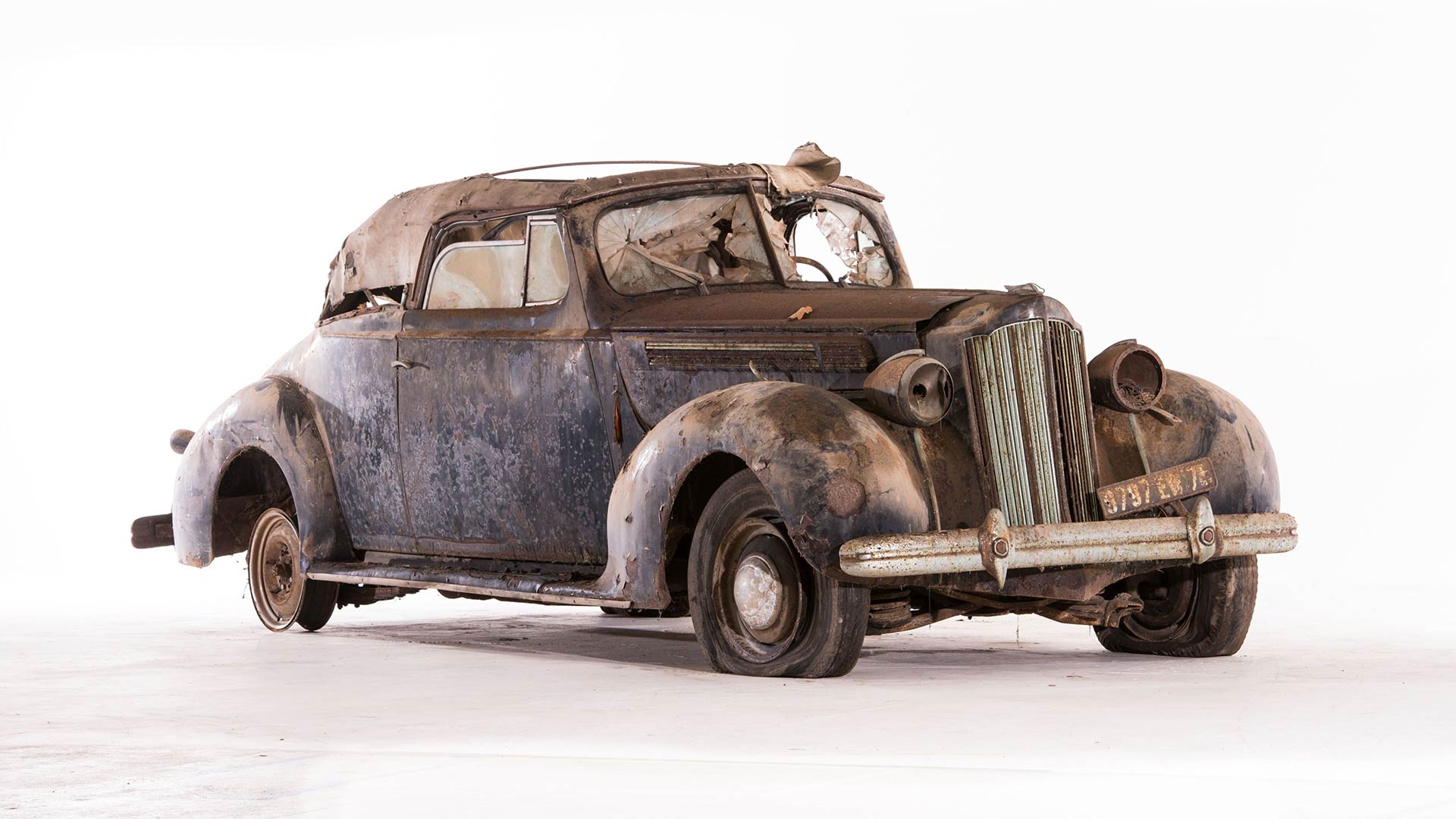 Another vehicle formerly part of the Roger Baillon Collection, this is noted to be an extremely rare European-specification of the Packard Super Eight. Based on the larger V12-powered models, the Super Eight made use of a 6.3-l inline-eight engine producing an impressive 145 hp.

The car on sale in Paris is noted to have been registered in the French capital as far back as 1956, with a speedometer in km/h showing its European specification. Like the Audi Front, it has been dry stored, with the burgundy leather interior noted to be in good condition. A cracked windscreen might not be the easiest replacement find, but the luggage rack and hood frame are all present. 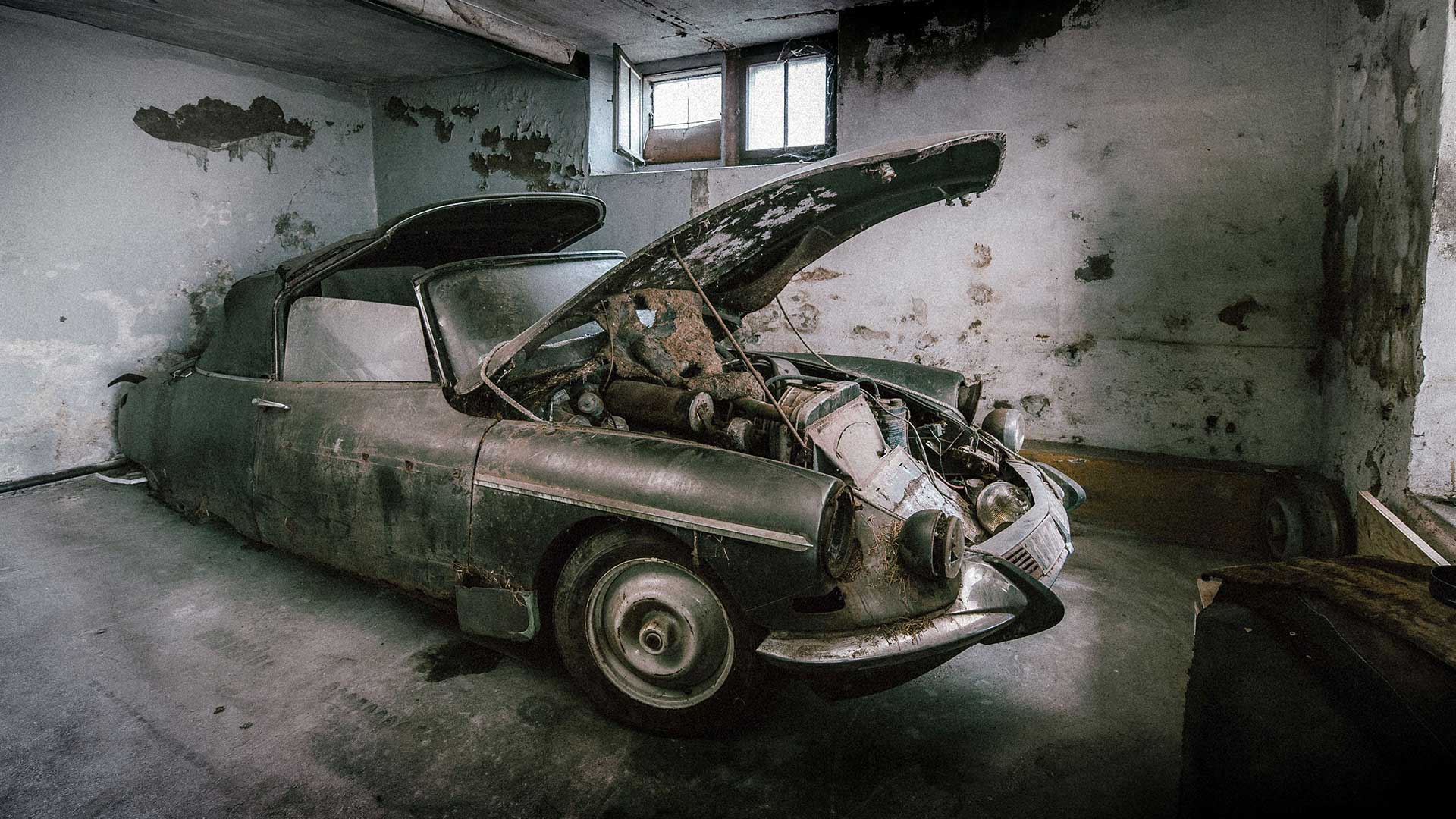 A genuine barn find example, there are perhaps very few Citroen DS models left in the world that have not been subject to some restoration work. This car is untouched from the 1970s, when the French owner laid the car up with plans to repair some accident damage. The repairs never came, and the DS went to the 2015 Retromobile auction in this state.

This is one of the last factory-built cabriolet models, making this already desirable car even more appealing to collectors. Quite clearly the DS will need substantial restoration work, including sorting the paintwork and repairing the crash damage from five decades ago. 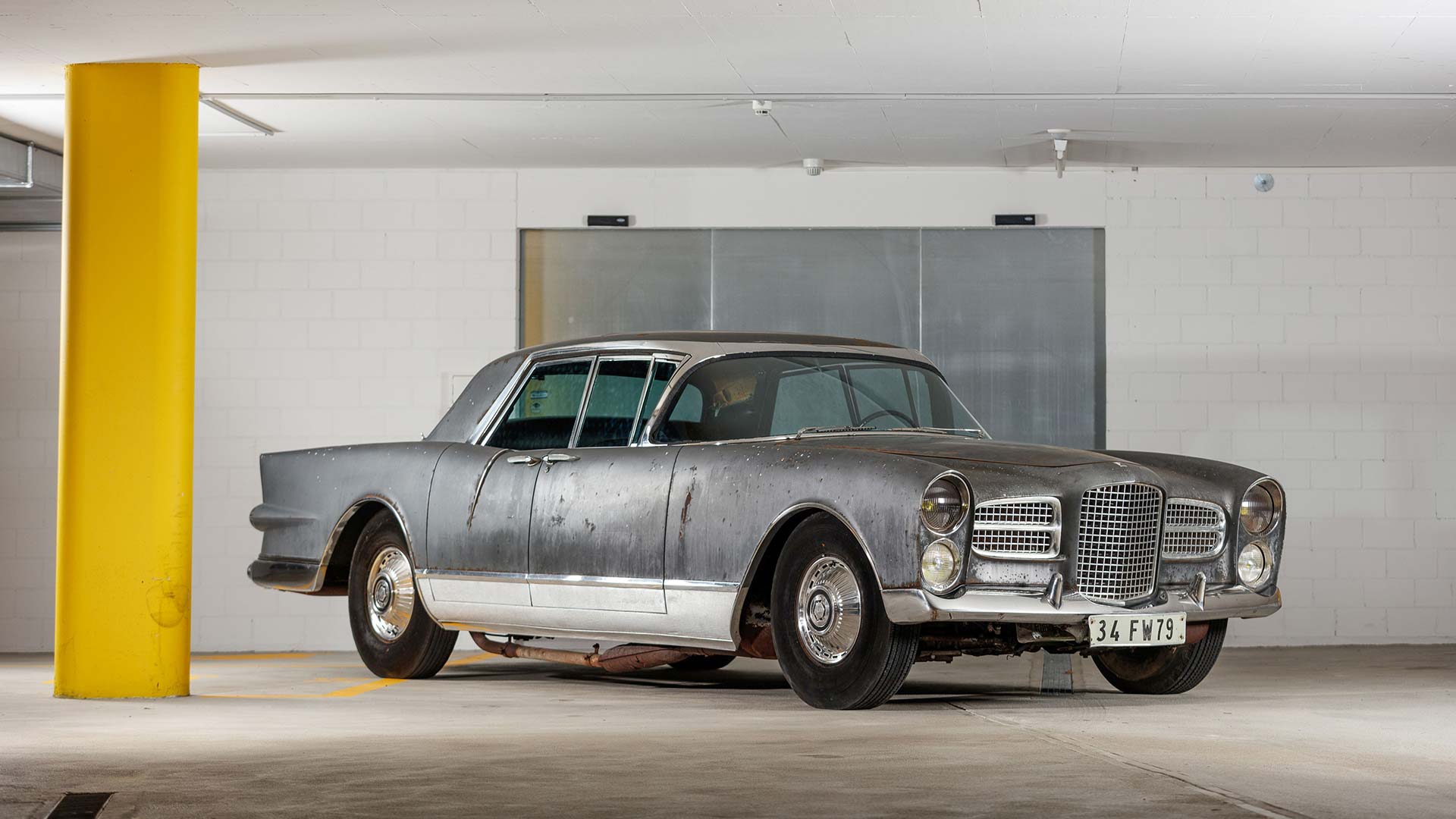 Anecdotally described as costing four-times the price of a contemporary Citroen DS when new, the Facel Vega Excellence was France’s premier luxury car of the 1950s and ‘60s. A connection with Chrysler saw a supply of large V8 engines, with this example powered by a 360 horsepower 361-cubic inch (5.9-l) unit.

A total of 153 examples were made between 1958 and 1964, with this car originally owned by an aristocratic Russian family. Acquired by Roger Baillon in late 1964, the car sat undiscovered until 2015. Although the exterior paintwork is noted to need attention, the interior is said to have been well maintained. 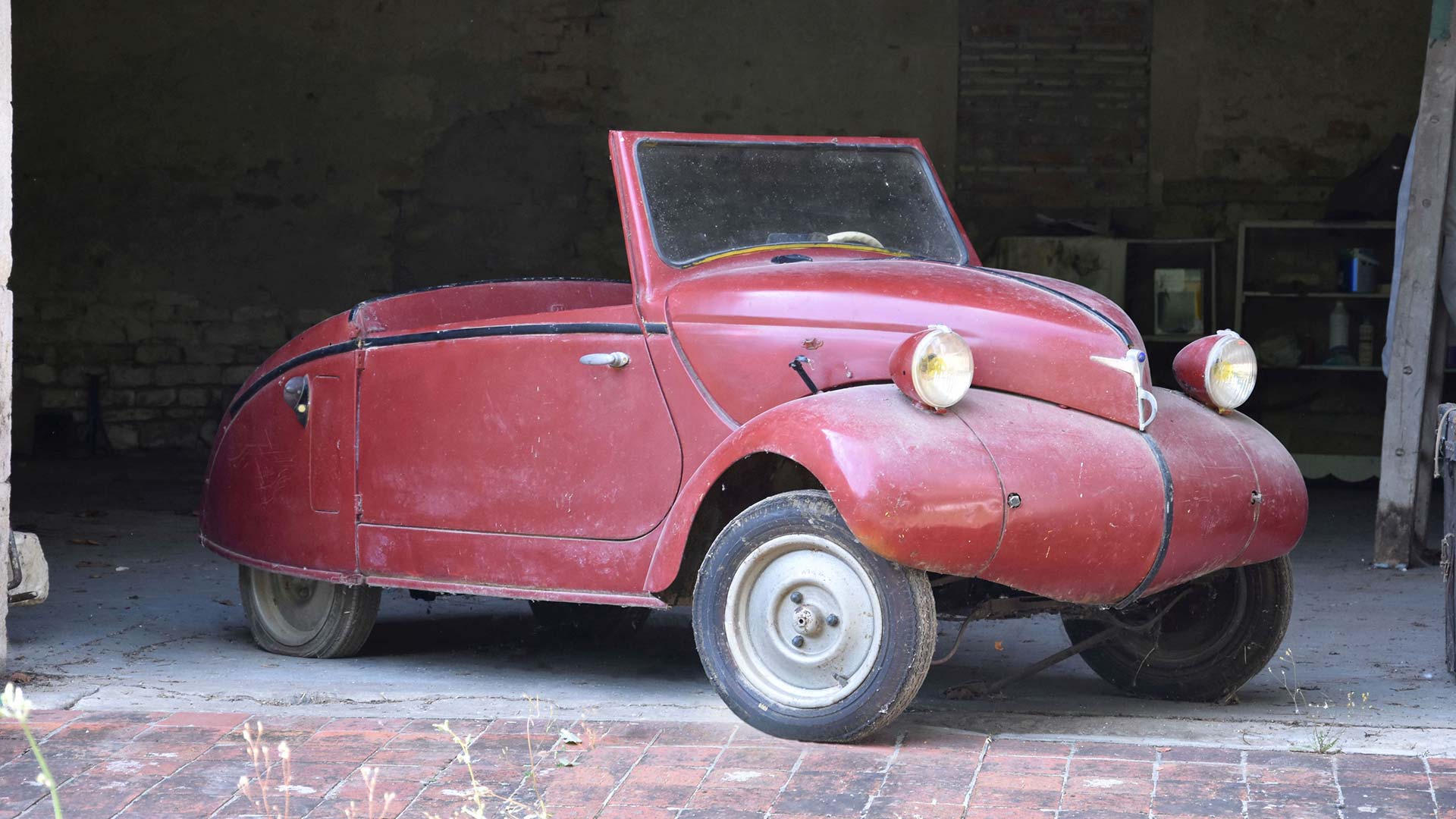 In the aftermath of the Second World War, French manufacturers were drawn to creating small economical cars. Automobiles Julien was one such company designing diminutive vehicles, led by famed engineer Maurice A. Julien. The MM5 was first shown at the 1946 Paris Motor Show, and featured intriguing design ideas such as the rear track being narrower than the front.

A single-cylinder two-stroke engine supplied a massive 10 hp, with a three-speed manual transmission sending power to the rear wheels. Only a handful of Type MM5s were created, with this example said to be in almost complete condition. Fittingly, the Julien comes with a small estimated auction price of $6,000 to $10,000 (£4,600 to £7,700). 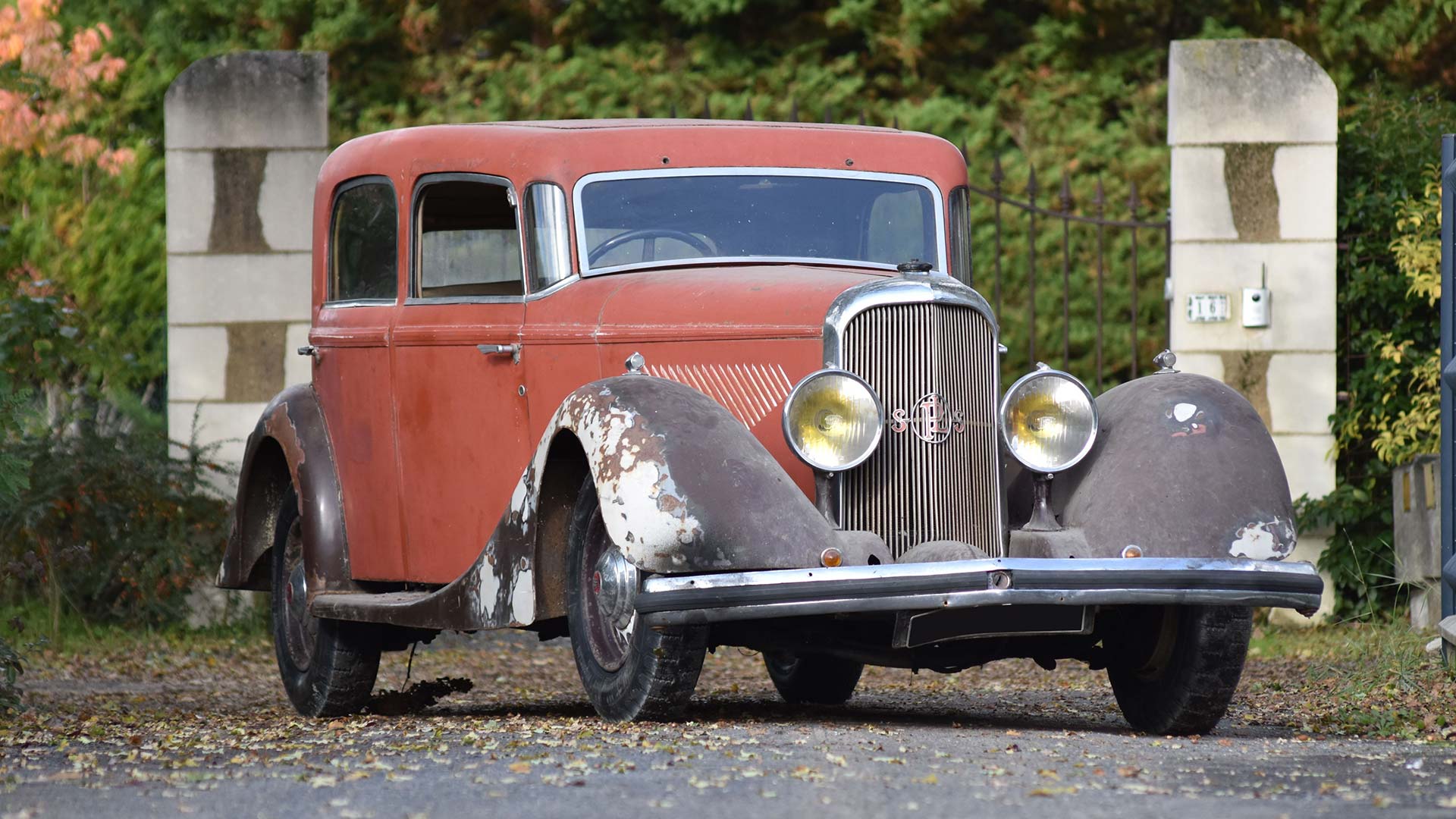 Panhard et Levassor was one of the world’s earliest automakers, having first been established in 1887. Panhard’s luxury status even saw the company supply official cars to the French president, and the 1930 Paris Motor Show saw a new CS model unveiled.

The car up for auction is a later X73 version, which features a larger 2.8-l six-cylinder engine producing 80 hp. Most noticeable is the special three-piece panoramic front windshield, helping to eliminate blind spots. Currently owned by a French collector, the Panhard has been unrestored to preserve its aesthetic originality. 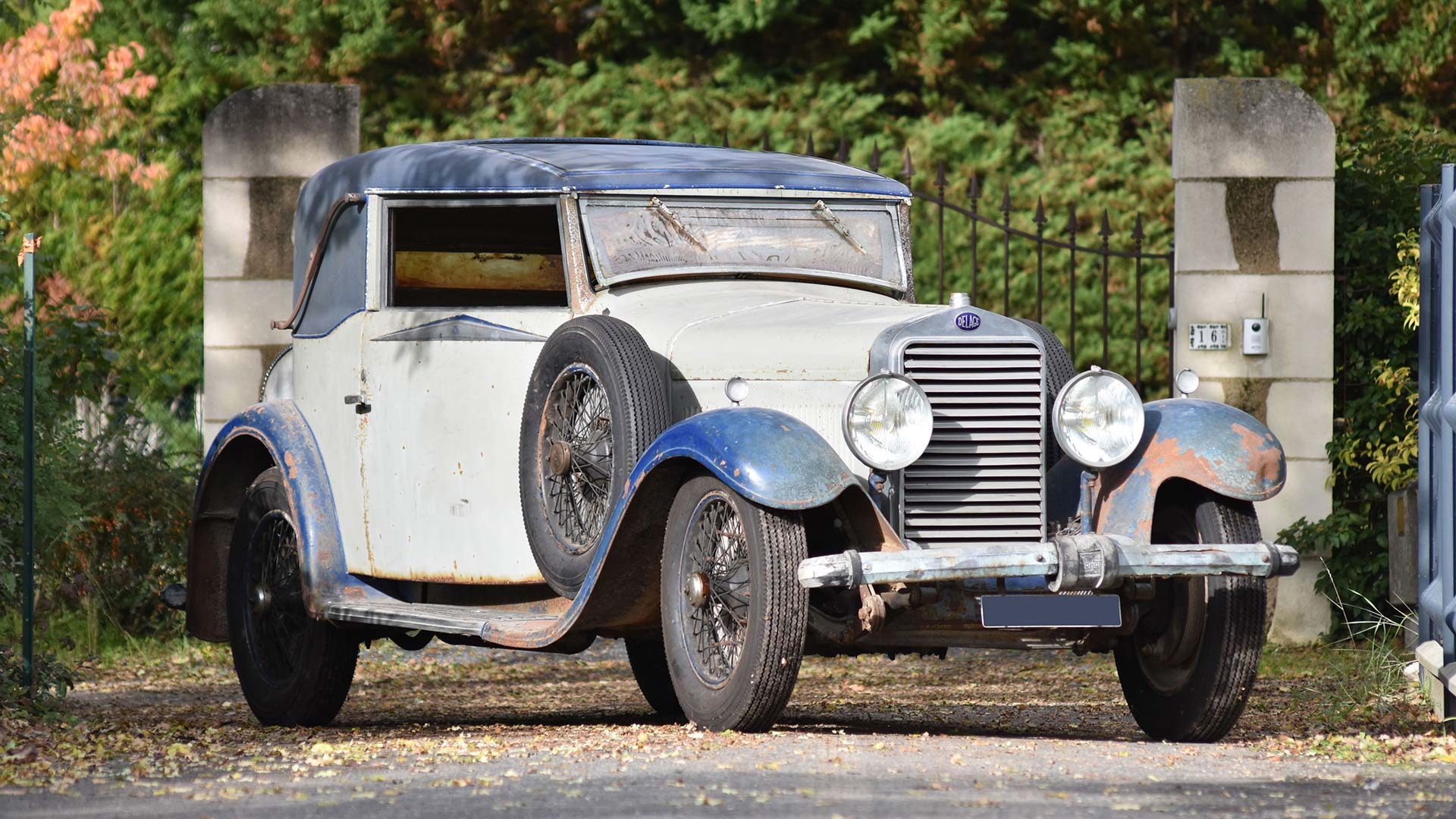 Another early French manufacturer, Delage was founded in 1905 with just three employees. The company would go on to produce luxury road cars and a series of successful racing machines up until the 1950s.

Started in 1926, the Delage DM featured a six-cylinder engine with 17 hp. A later DMN model, the first lady owner of the car to be sold was fitted with a custom body by the Autobineau coachworks. Kept in original condition, the engine is noted to have seized but is mechanically complete. 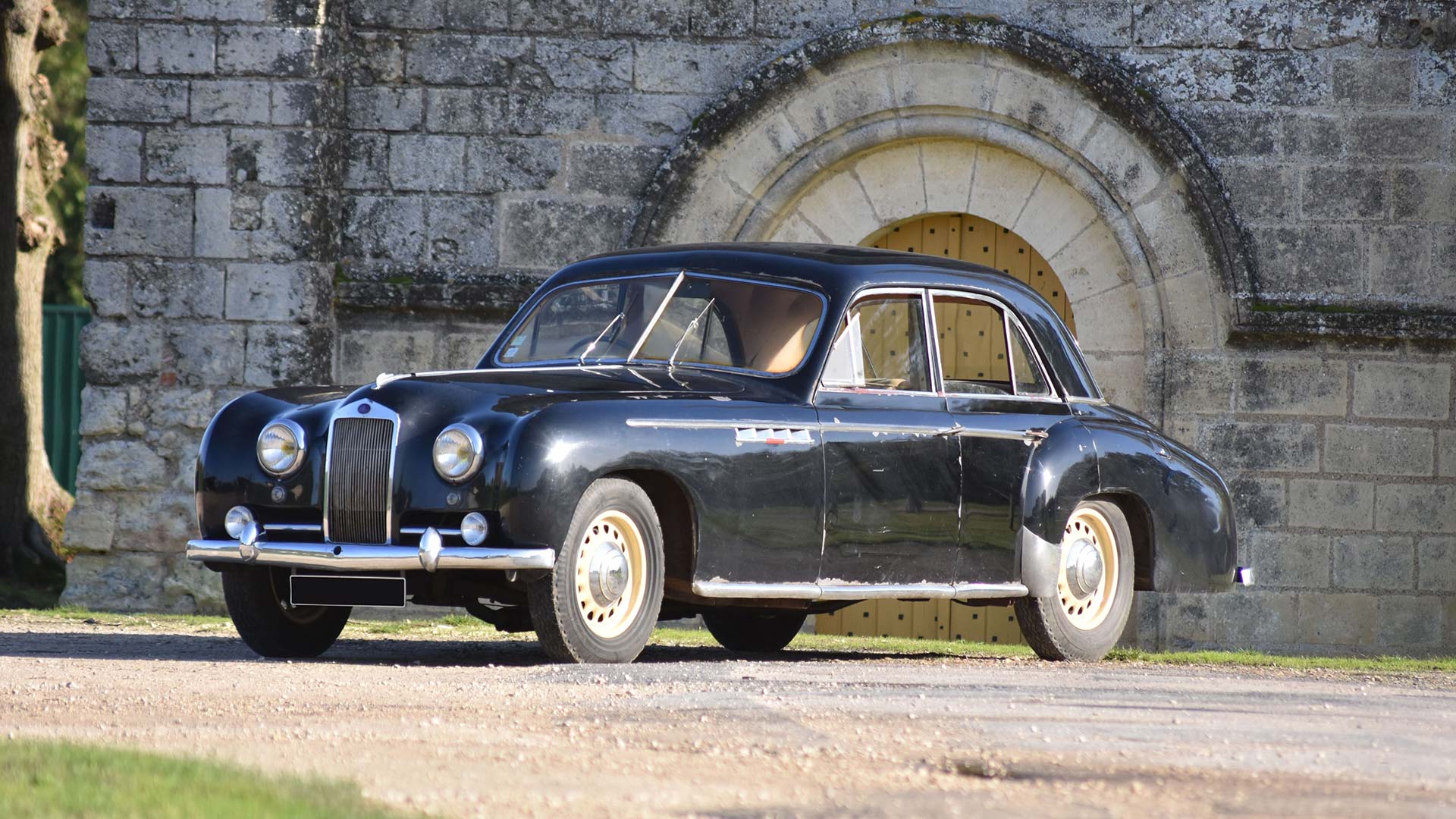 The Delage brand struggled after the Second World War, and found itself absorbed into the Hotchkiss company in 1953. It makes this D6 3L model to be one of the last Delage-badged cars to be produced, being delivered in February 1954 for the then President of the National Assembly of France, Edouard Herriot.

Although the exterior bodywork may appear a little tatty, when new it was finished in black with copper detailing. A brown leather interior was also chosen, whilst the 3.0-l 90 hp unit was the only engine choice available. 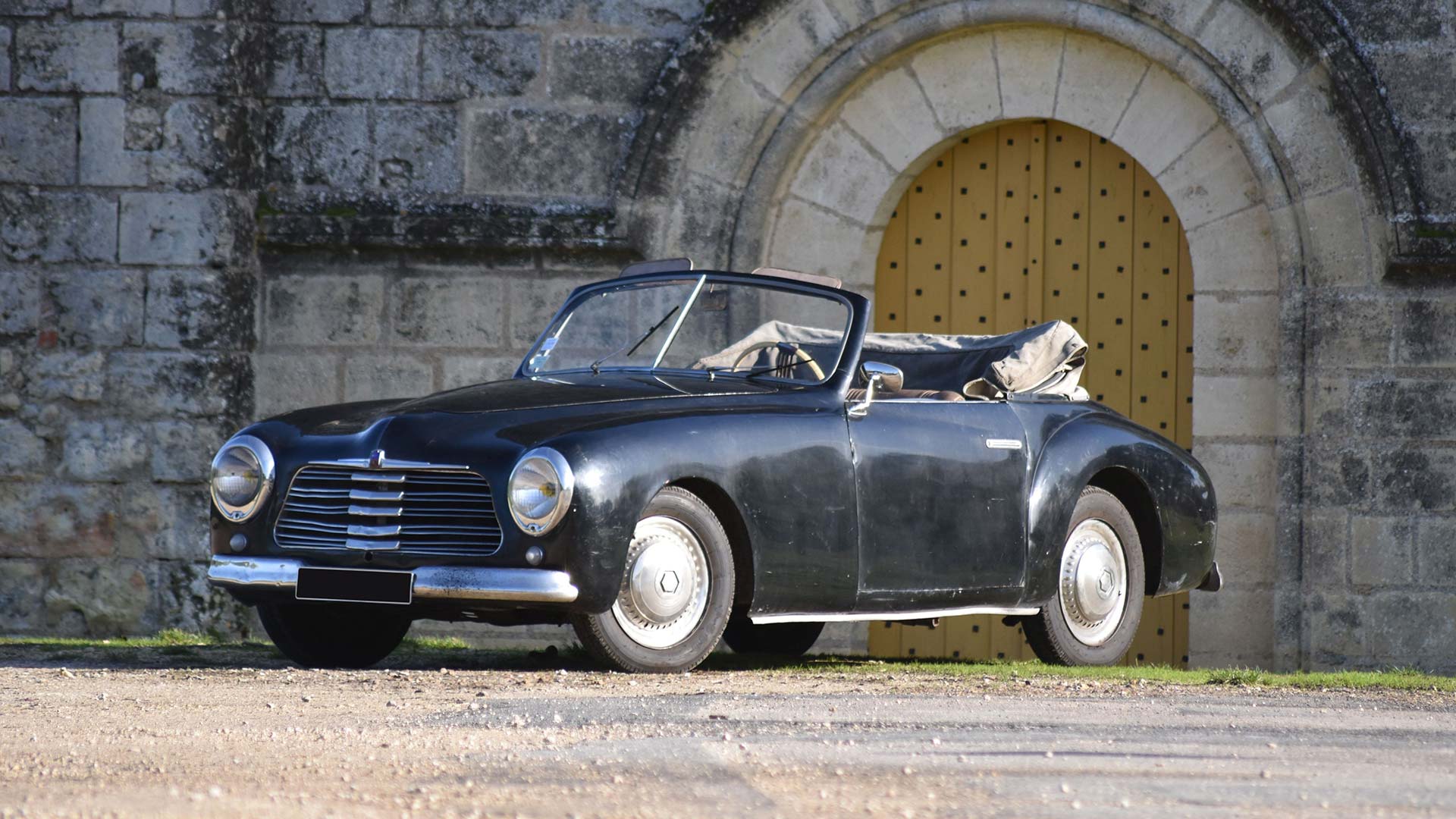 Our continuing lesson in defunct French car manufacturers brings us to Simca. A subsidiary of Chrysler Europe in its later years, the Simca brand completely disappeared in 1978 when it was sold to Peugeot Citroen. Originally launched in 1937, the Simca 8 was based on the Fiat 508C.

A special concept Simca 8 Sport was created for the 1948 Paris Motor Show, with the styling undertaken by Pinin Farina. The successful reception saw the Simca 8 Sport pushed into production. This particular was bought new by a French family in 1951, who kept it in their ownership until 2008. 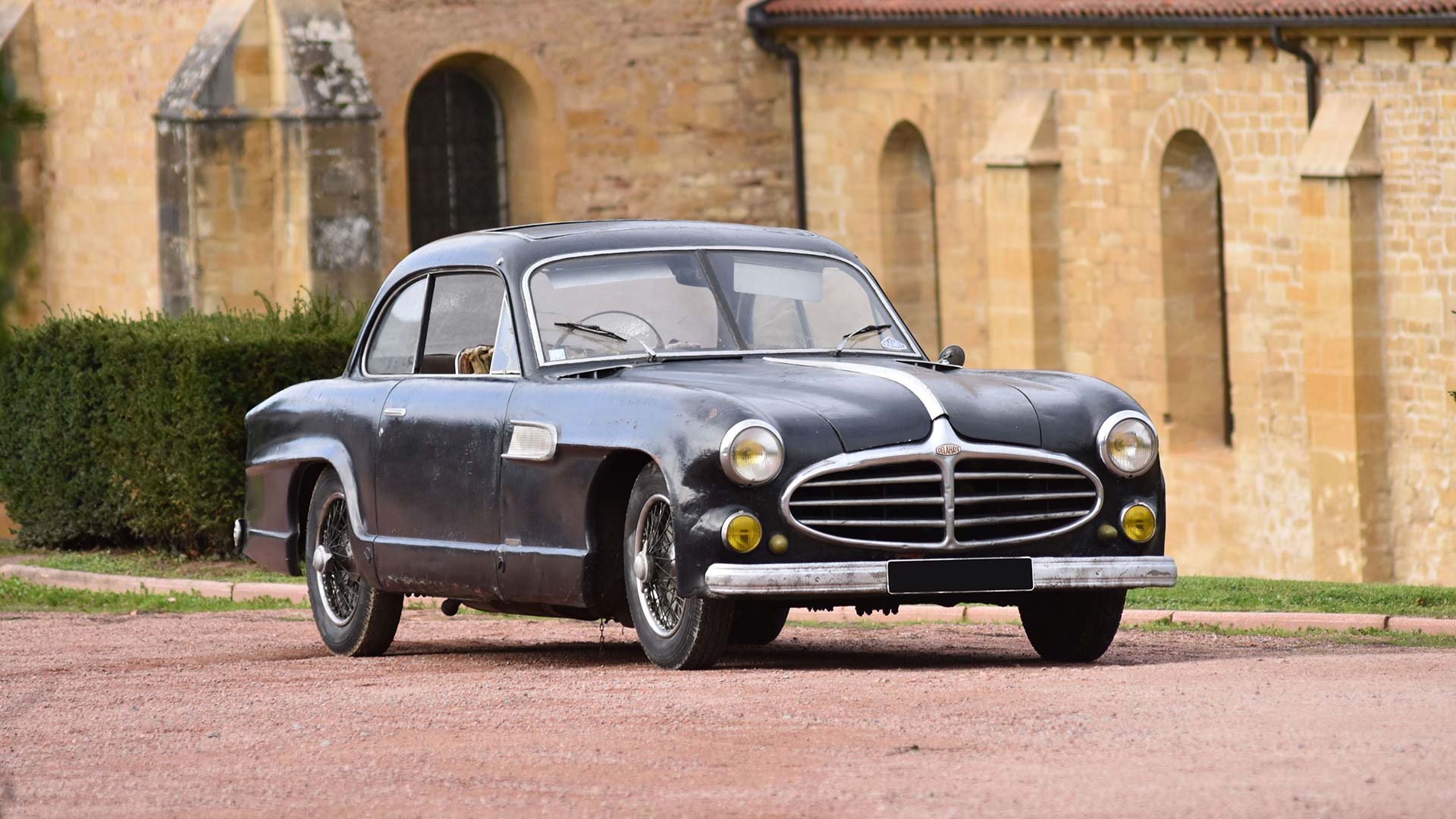 Like Delage, the Delahaye brand was another French marque absorbed by Hotchkiss and placed into obscurity in the early 1950s. This beautiful 235 ‘Coach’ is one of only four ever created, making it an item for serious collectors of rare French cars.

Powered by a 3.2-l inline-six engine with 152 hp, the 235 was quick but also expensive compared to contemporary sports cars. This particular car appeared in the 1960 French film Zazie dans le Métro, but is now in need of sympathetic restoration inside and out. 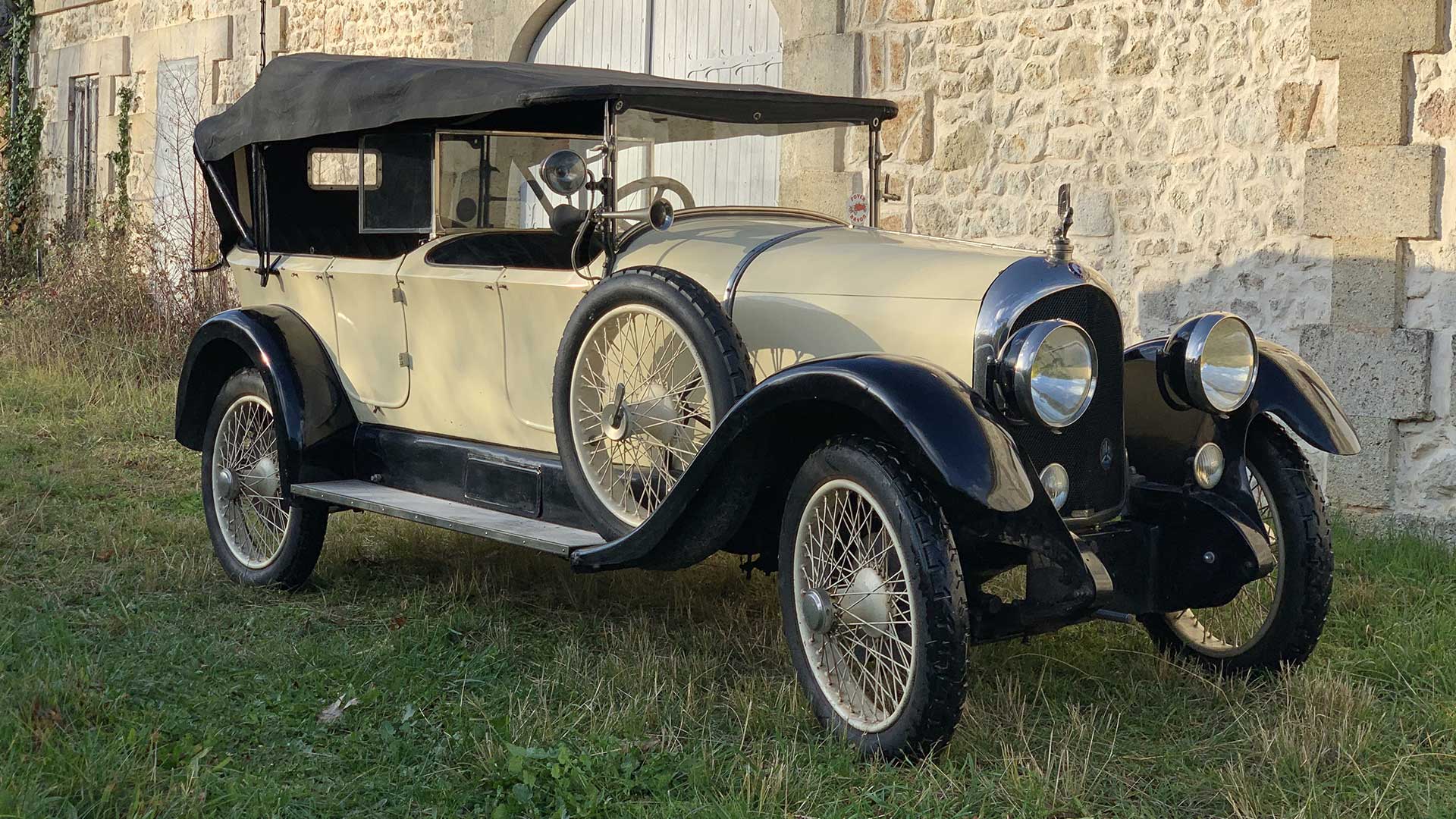 Known for producing impressive pre-war cars, the Rolland-Pilain company was founded in 1905, but ceased production in 1932. The Type R was launched in 1922, and featured a new 2.2-l four-cylinder engine producing 12 hp, plus hydraulic brakes all round. Rolland-Pilain entered the Type R in the 1923 Le Mans 24 Hours race, finishing 21st overall.

Acquired by the selling family in 1985, this Type R has undergone some maintenance work in the 1990s. Attention was also paid to the paintwork, but the car is ultimately still in original condition and in regular use. 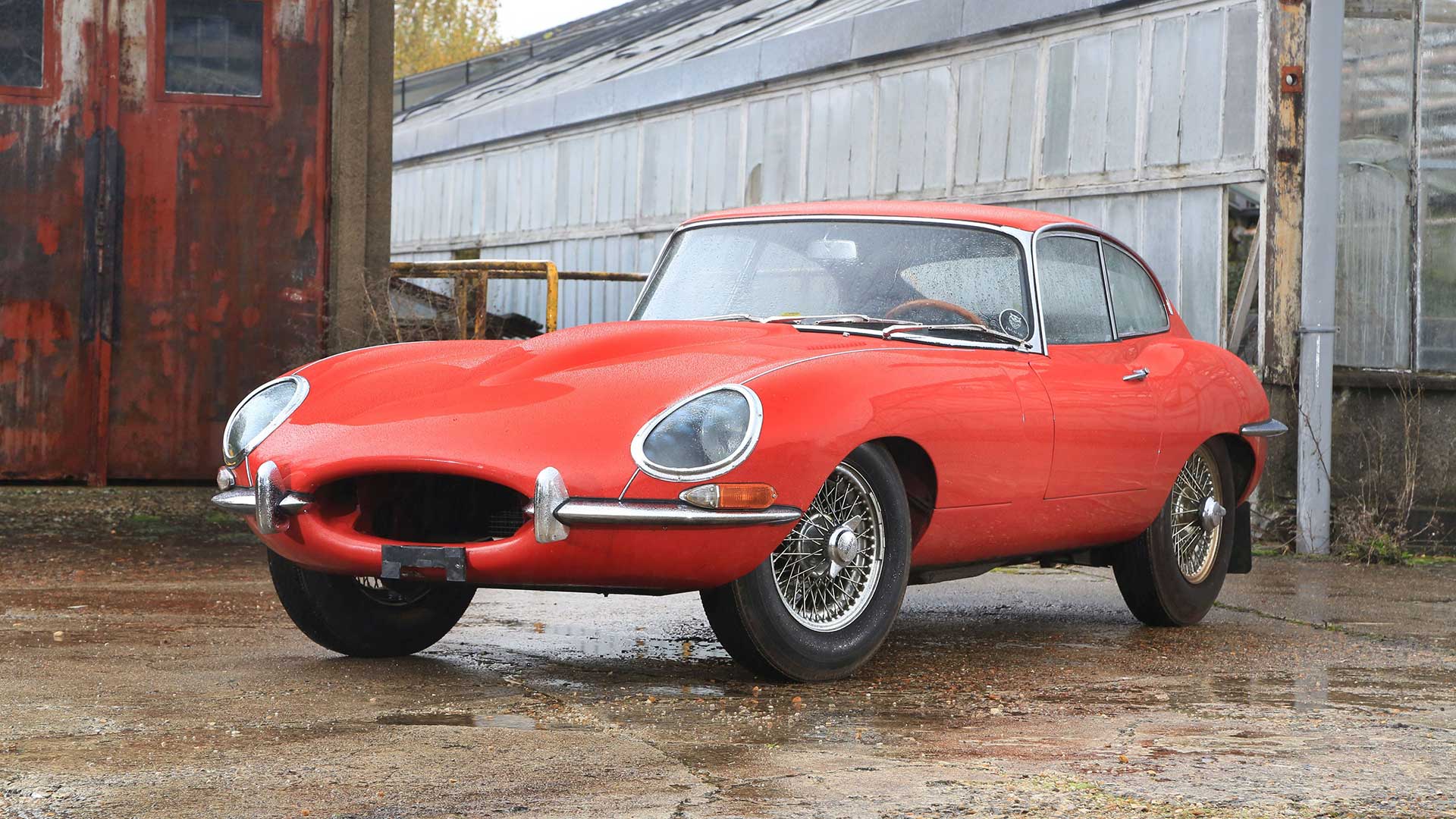 It might not be French, but the Jaguar E-type is still one of the most desirable classic sports cars anywhere in the world. The example up for auction at the Retromobile sale was sold to a Swedish buyer when new, and has remained in the same collection ever since. Ordered with an array of performance upgrades from the factory, this is a rather special 4.2-l E-type.

Supplied documentation even includes a sticker for the inline-six motor stating ‘Special Engine’, along with the sales invoice detailing the enhancements made. The car covered around 6,000 miles before being laid up in Stockholm for the winter of 1976. 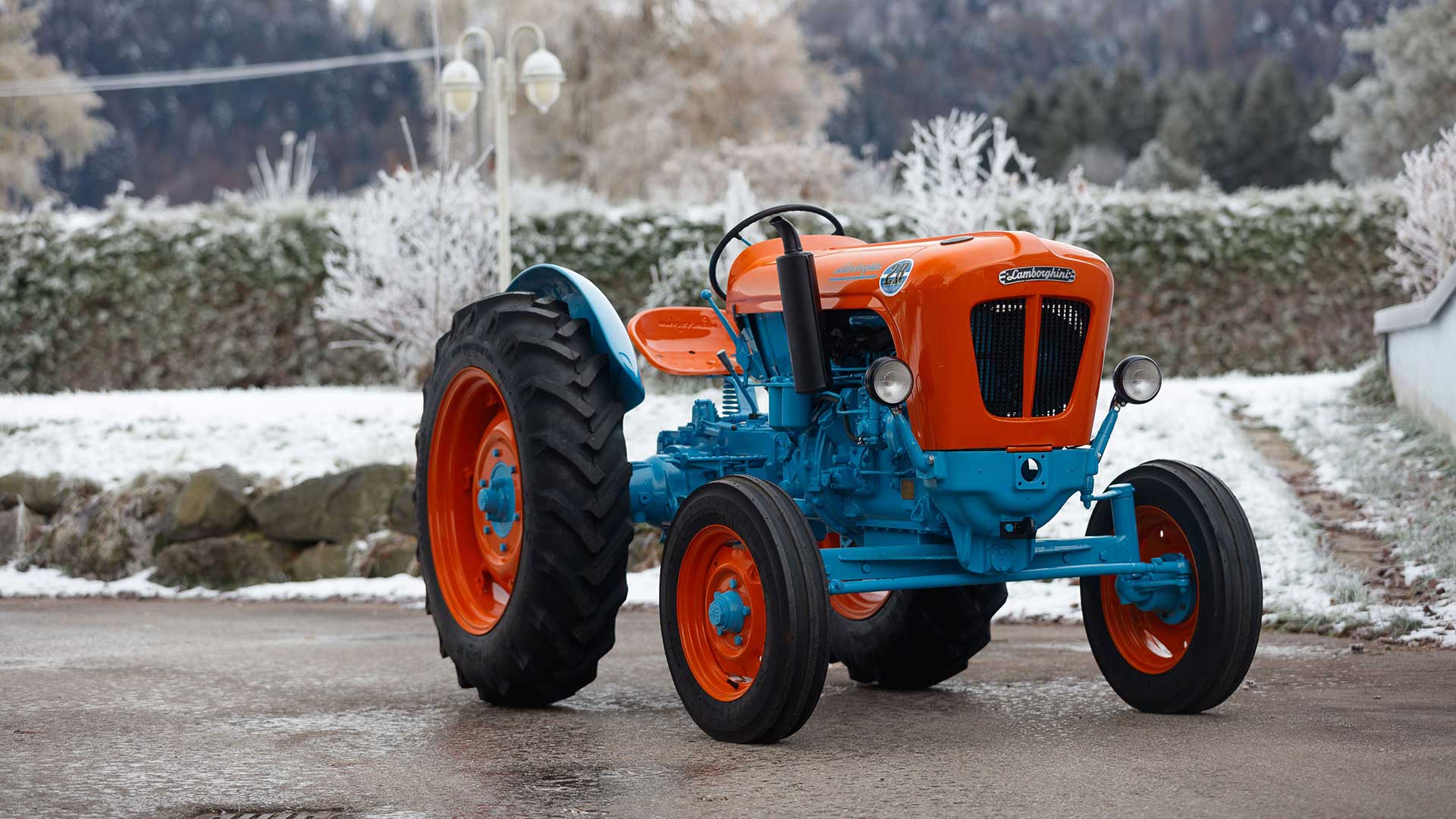 We may be pushing the boundaries of ‘barn find’ with this lot, but what other location would you realistically expect to find a tractor? This is not just any agricultural vehicle, but one with a Lamborghini badge. Ferruccio Lamborghini founded the company in 1948, and used its success to finance his creation of the sports car brand in 1963.

Unlike the later Lamborghini cars, this tractor does not have a V12 engine. Instead, it has a three-cylinder diesel engine, offering a modest 39 horsepower. A thorough restoration was undertaken by the seller in 2015, and the tractor has not been used since. 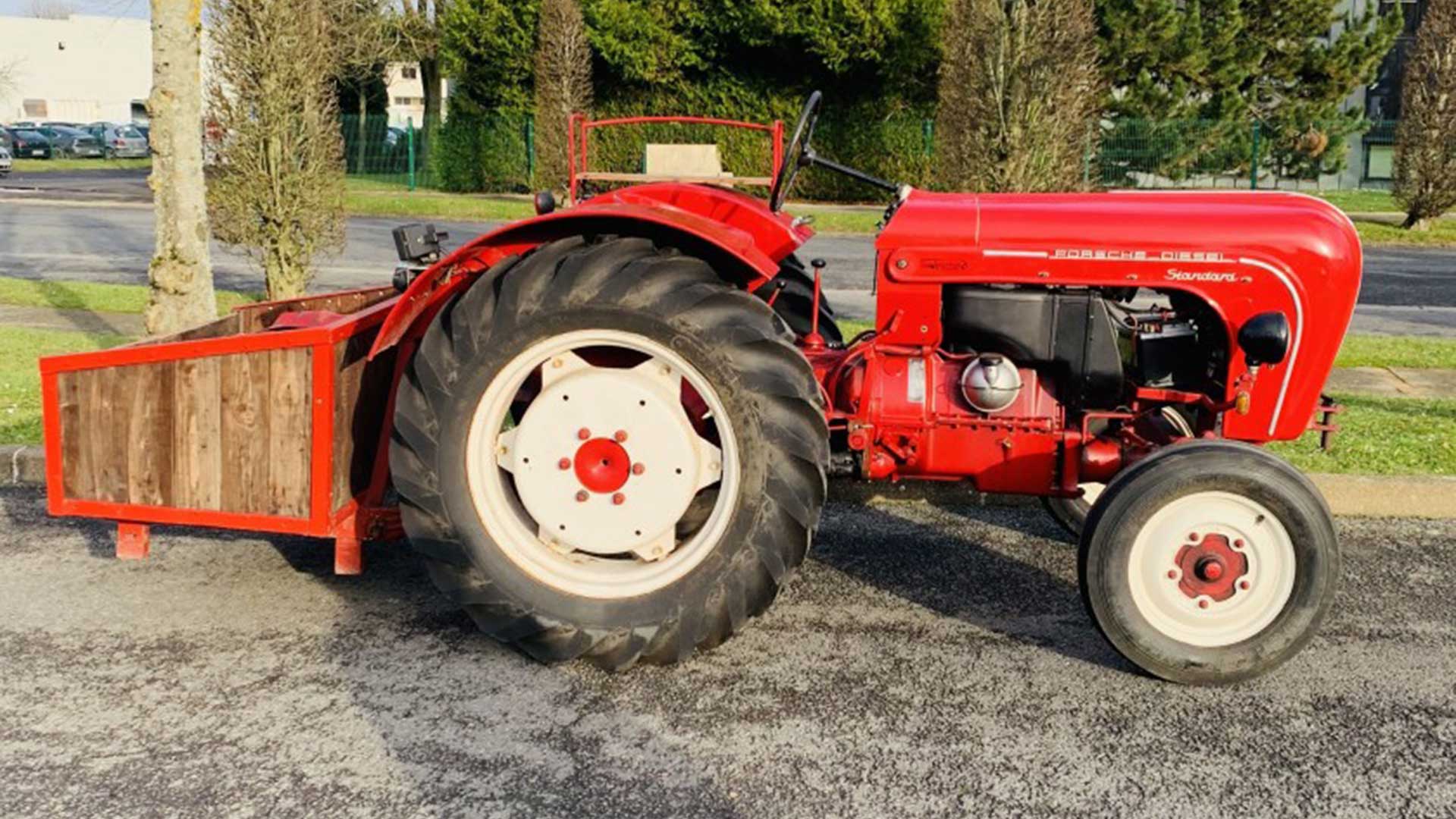 Porsche purists were a little upset when the company launched diesel versions of its SUV range. However, the brand had been used on thousands of diesel-powered vehicles decades before, with Porsche-Diesel tractors first being made in the 1930s.

This example is a later Standard 218 model, with 12,000 examples made between 1957 and 1963. An output of 28 horsepower is unlikely to challenge the latest Porsche 911 on a race track, but the Standard 218 would certainly have the advantage in a muddy field.