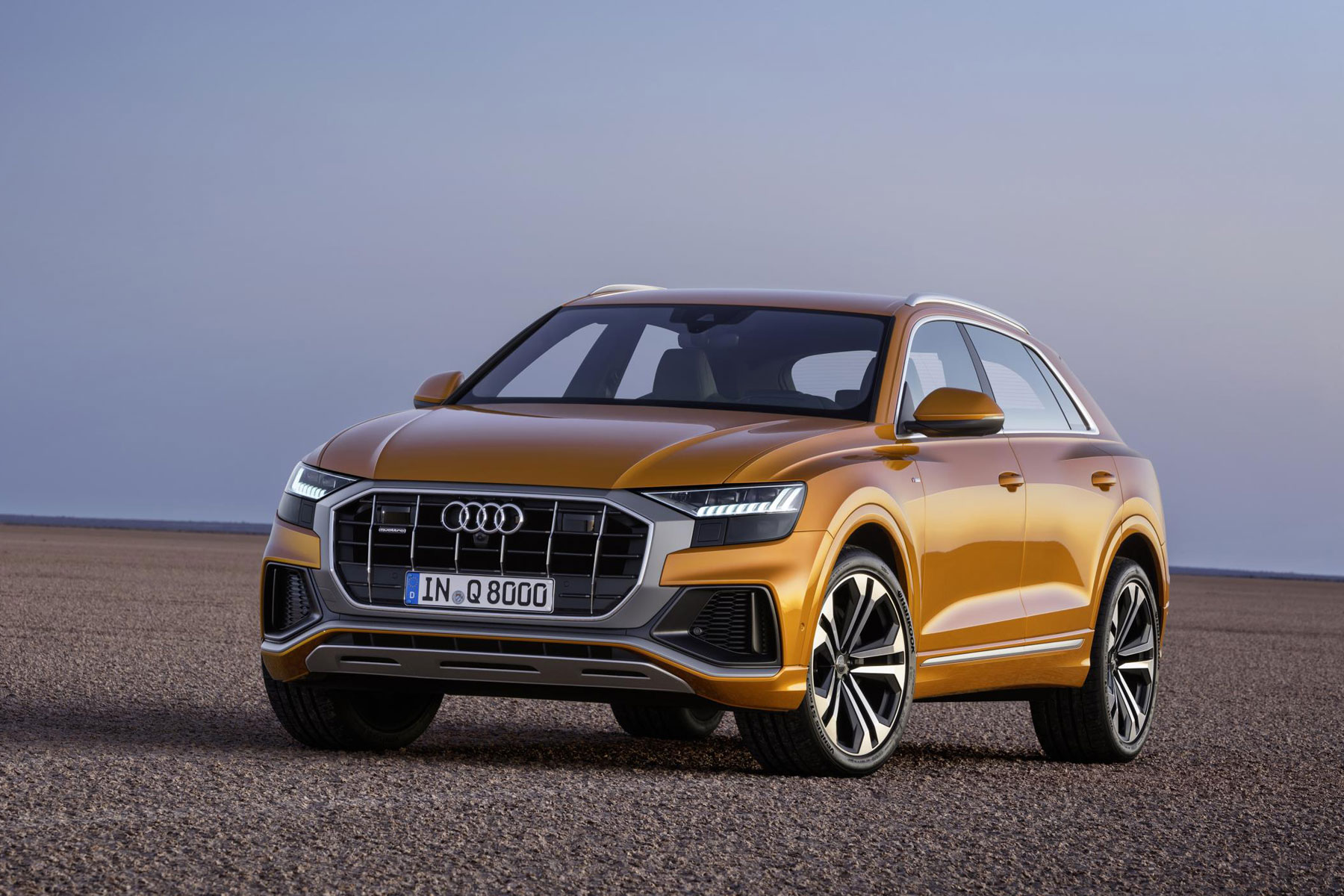 Audi’s growth strategy appears to be focused on climbing every sales mountain and fording every niche, which is why we’re faced with the imminent arrival of the Q8. Yes, it’s yet another SUV.

Although it’s based on the Q7, the new Q8 features a lower, coupe-like roofline, as Audi guns for the Mercedes-Benz GLE Coupe, Range Rover Sport and BMW X6.

In a nutshell, the Q8 boasts an interior and a level of technology influenced by the new A8 luxobarge, with a body that fuses “an elegant four-door luxury coupe with a large SUV”. You may or may not agree with the ‘elegant’ part of Audi’s statement, but you’ll almost certainly struggle to the grasp Ingolstadt’s claim that it echoes the original Quattro. Wait, what?

But we’re not here to be judge and jury on the latest vehicle to jump on the bandwagon – we’ll leave that for when we see it in the metal. Instead, we’ll pick the bones out of one of the longest press releases on record to bring you the facts that matter. 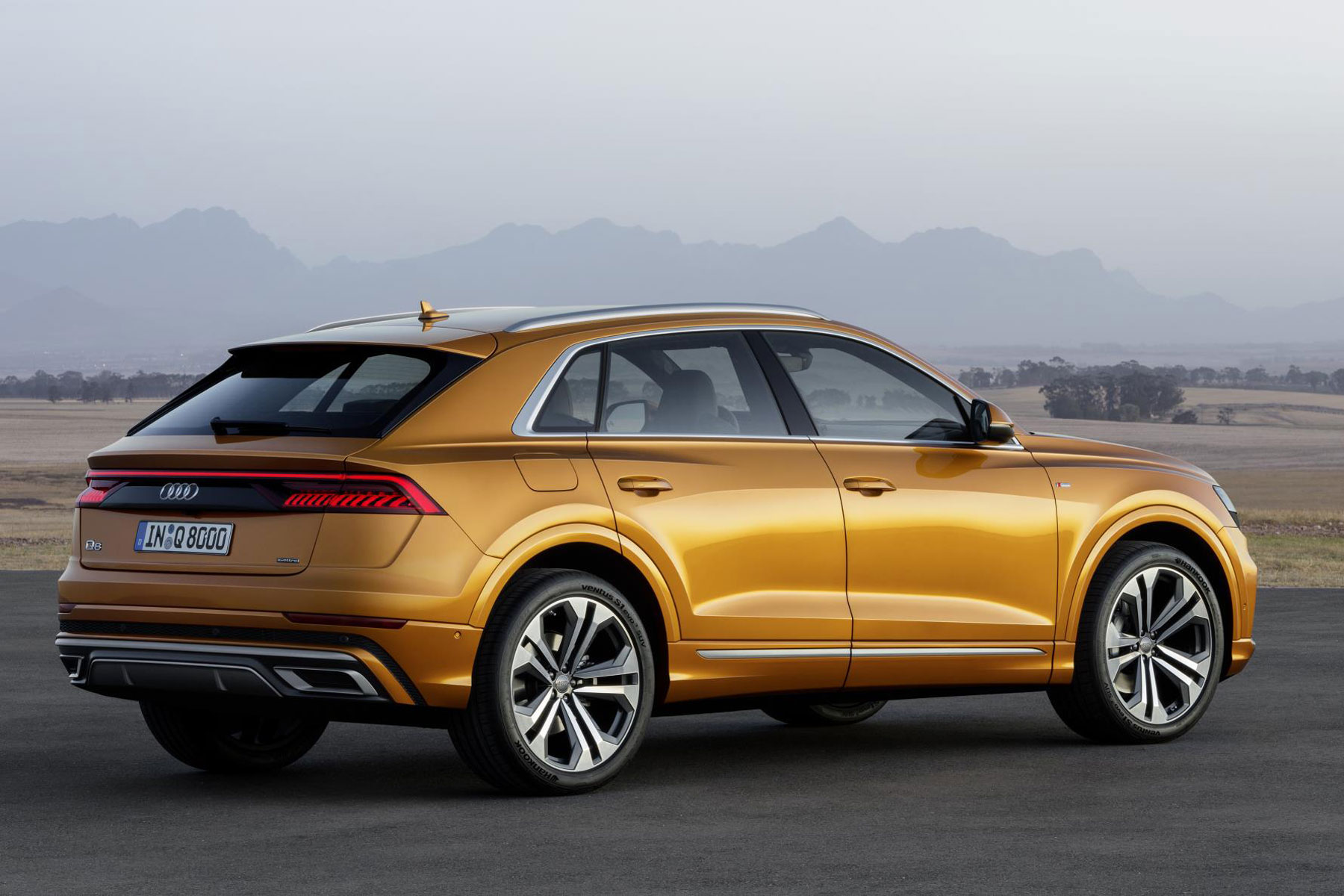 At launch, the Audi Q8 will be powered by a 3.0-litre six-cylinder turbodiesel engine developing 282hp and 442.5lb ft of torque. That’s enough to propel it from rest to 62mph in just 6.3 seconds before hitting a top speed of 144mph.

The engine features mild hybrid technology, enabling it to coast between 34mph and 99mph with the engine switched off, with a start-stop range that starts as low as 13mph. 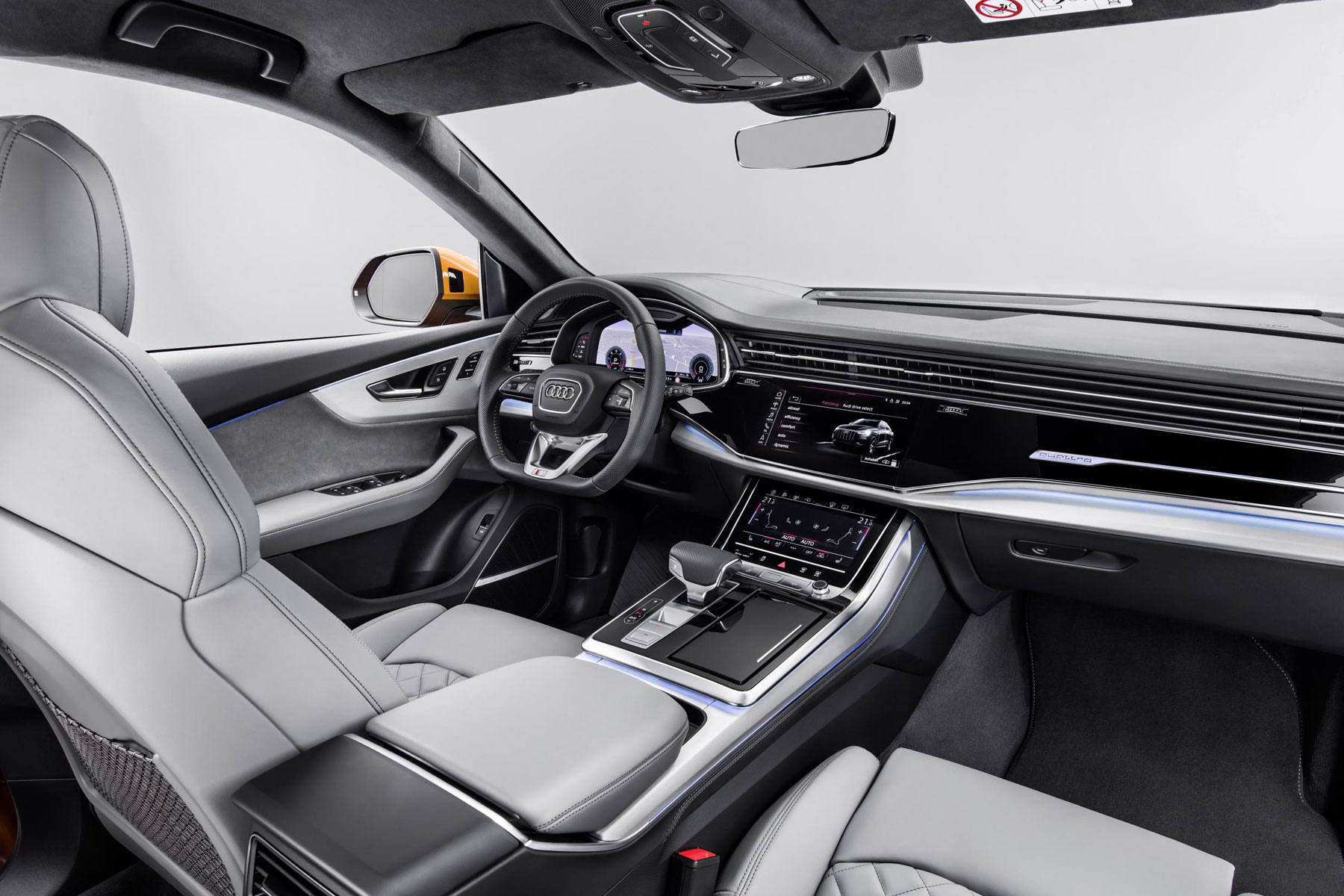 Initially, all models will be available in S Line trim, but a new high-end Vorsprung edition will follow, offering Valcona leather, all-wheel steering, head-up display and – wait for it – 22-inch rims as standard. Vorsprung durch Bling.

In the meantime, standard kit includes adaptive air suspension, MMI Navigation Plus, Matrix LED headlights and three-dimensional daytime running lights, which are mimicked on the back, similar to the approach used on the new A8.

The interior also borrows heavily from the A8, featuring a clean and simple design, two large touchscreens and a choice of interior finishes.

Unlike the Q7, the Q8 will not be offered with a seven-seat option, but interior space is on a par with its longer and narrower sibling. Boot capacity with the rear seats in place is 605 litres, but this can be increased to 1,755 litres with the seats folded down. The tailgate opens and closes electrically, as you’d expect.

Naturally, Audi buyers will be offered the chance to select from many options, including a 23-speaker Bang & Olufsen 3D sound system to deliver music “exactly how it was recorded at the concert hall”. David Hasselhoff in crystal-clear clarity, which will be music to the ears of German drivers.

And, while The Hoff would invite you to jump in his car, the Q8 will offer drivers the opportunity to get out of the vehicle to park it using their smartphone. That’s one for the future, but in the meantime, Audi will offer four driver assistance packages, with a range of systems that all but drive the car for you. Who needs KITT, eh?

Prices have yet to be announced, but we’d expect the range to start from around £65,000. The Q8 will be manufactured in Bratislava, with the first deliveries expected in the summer.