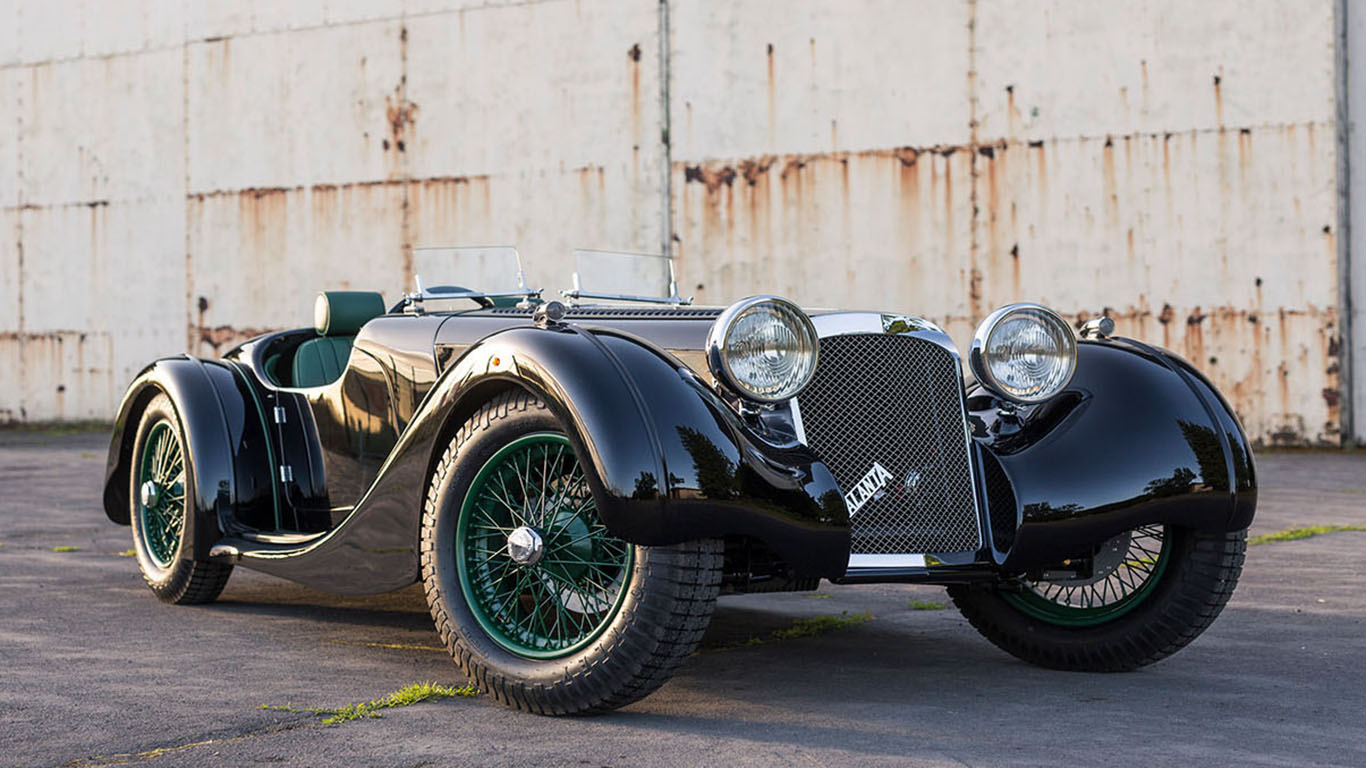 Never heard of Atalanta? Neither had I. The company built just 22 cars between 1937 and 1939 before becoming an early casualty of World War II. Production switched to generators and pumps, where it remained until Atalanta’s eventual demise in the 1990s.

The story could have ended there: another British car company consigned to the history books along with Frazer Nash, Austin, Bantam, Jensen, Rover and countless others. But it didn’t, and – after an 80-year hiatus – Atalanta is back with a new British sports car.

A history of innovation 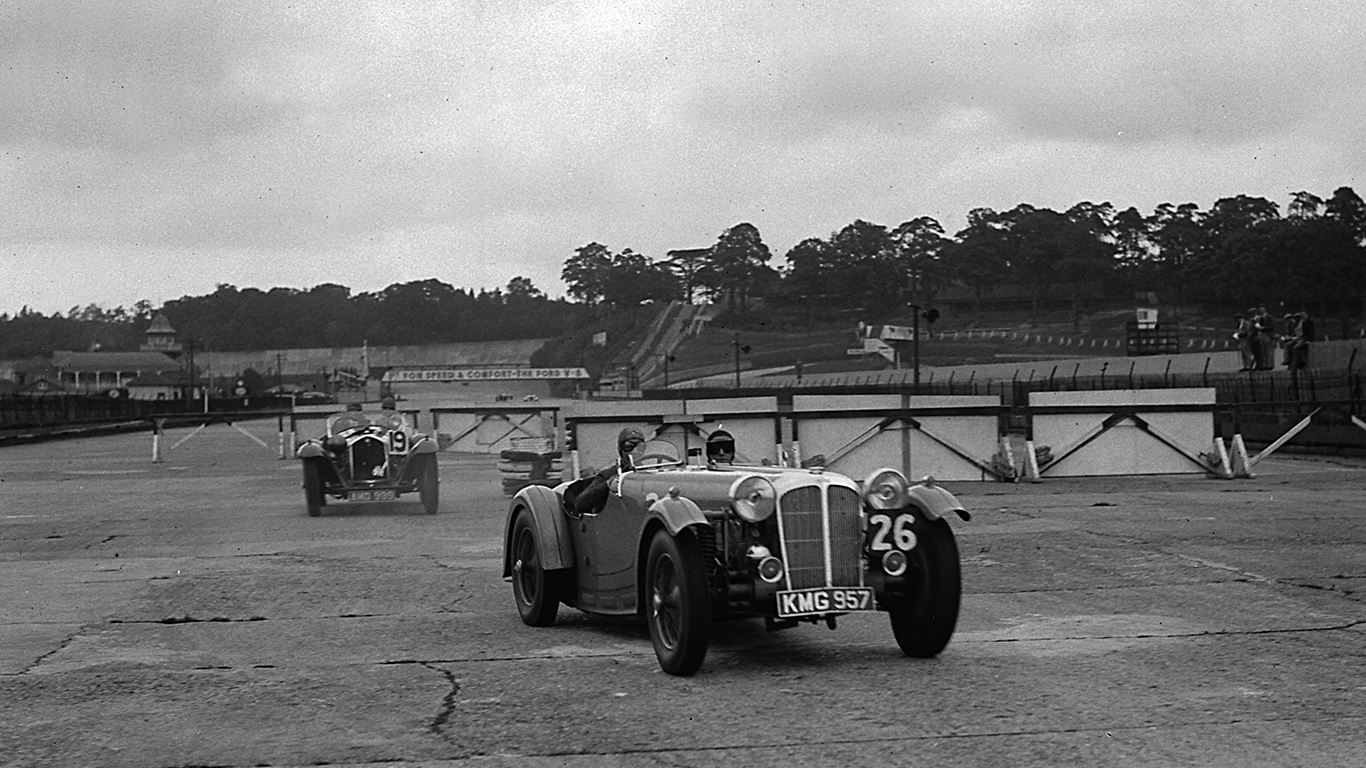 In truth, there was always something a bit special about Atalanta. Its 1937 roadster was hugely advanced for its day, with independent suspension, lightweight construction, a three-valve-per-cylinder twin-spark engine, hydraulic brakes and an electric pre-selector gearbox.

Seen here at Brooklands, the car was successful in motorsport, too. It raced at Le Mans in 1938 and won the Welsh RAC rally in 1939. Decades later, the Le Mans car was acquired by Martyn Corfield, a lifelong Atalanta enthusiast who owns three of the seven surviving originals. It was this car that would form the basis for his modern Atalanta roadster. 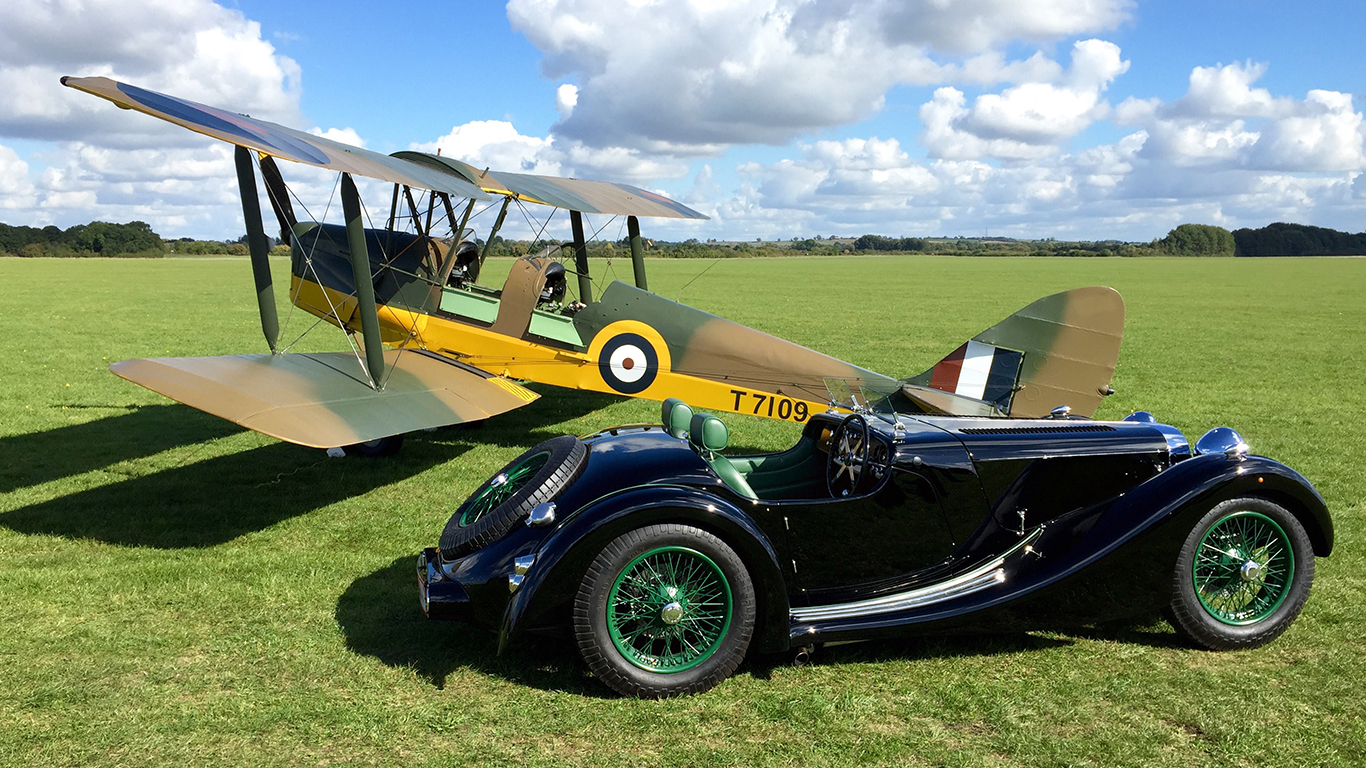 Martyn readily acknowledges that building a low-volume sports car – production is expected to run at one a month – won’t make him millions. But his passion for the project overrides such concerns; this is the realisation of a dream that began when he first saw an Atalanta in his local garage as a child.

Work on the reborn roadster began in 2009, with a concept version presented in 2012. Now, exactly 80 years since the original Atalanta left the Staines factory, the production car is ready: on sale and priced at £150,000. 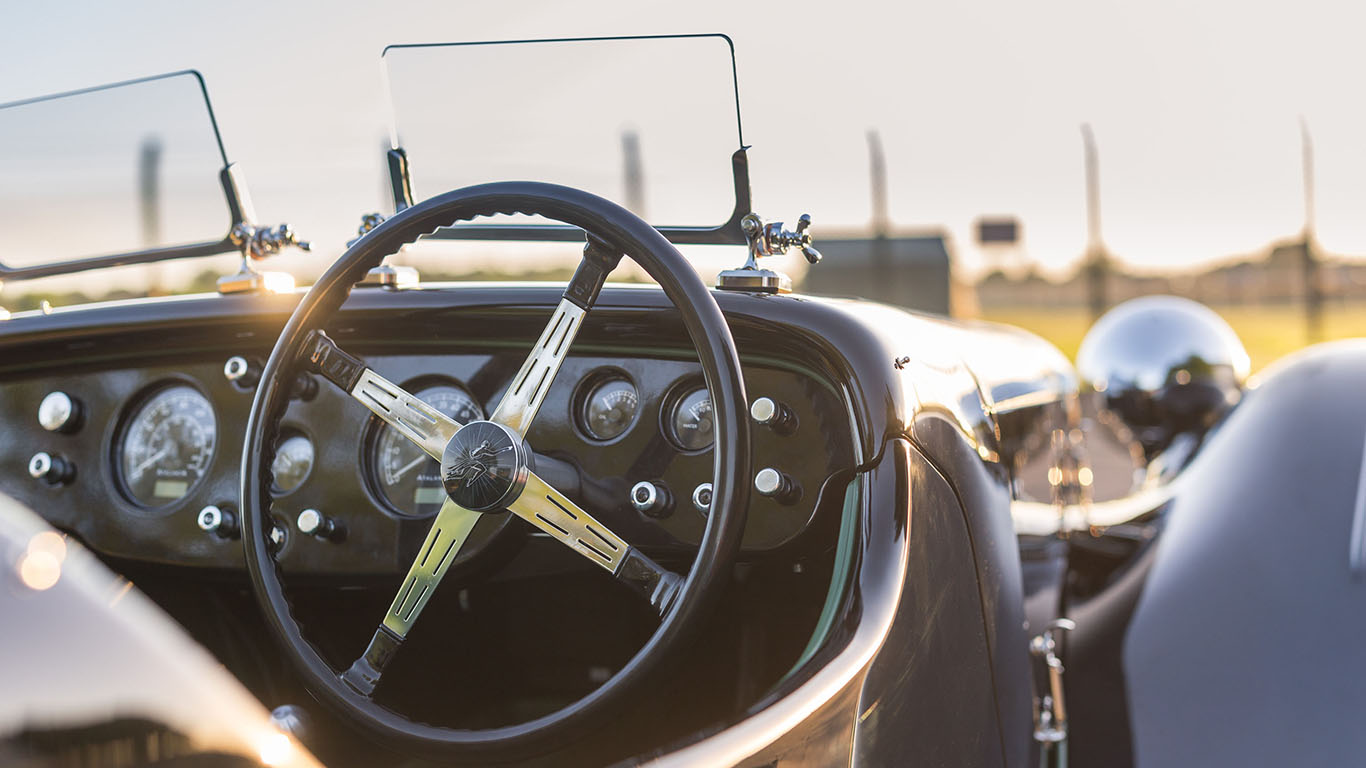 Atalanta is no longer based in Staines, but at Bicester Heritage – the former RAF base that houses much of Britain’s classic motor industry. As I drive through the site, I spot a wonderfully eclectic mix of cars: pre-war Bentley, Gordon Keeble, Jaguar E-Type, Peugeot 505 – even a rally-spec Fiat Panda. It’s a fitting location to see this evocative sports car for the first time.

I meet Martyn outside Atalanta’s office-cum-workshop. He’s warm and enthusiastic, reeling off facts about the company’s history faster than I can write them down. But this isn’t PR spin: he’s rightly proud of what his tiny, three-person team has achieved. 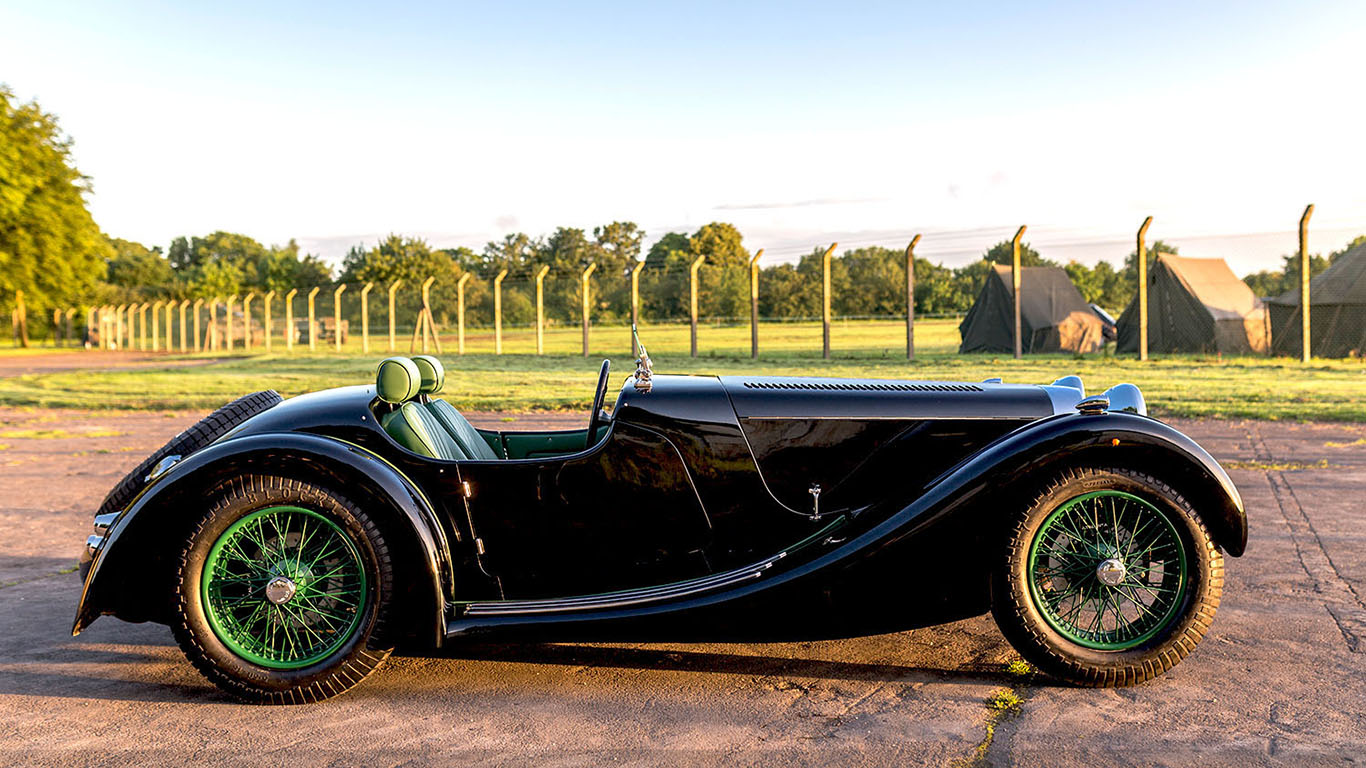 Elvis excepted, I’m not usually a fan of anything pre-1960. However, I’ll make an honourable exception here. Basking, roof-down in the midday sun, the Atalanta roadster looks fabulous. Sleek, low-slung and sporty, it’s the epitome of raffish 1930s glamour.

The finish is excellent, too. Paintwork looks deep and lustrous, while the interior is beautifully trimmed in soft leather. Look closer and you’ll spot neat details, such as the hidden door handles (tucked under the dashboard) and second filler cap (which houses a socket for a trickle charger). Side repeaters and seatbelts are the only obvious nods to modernity. 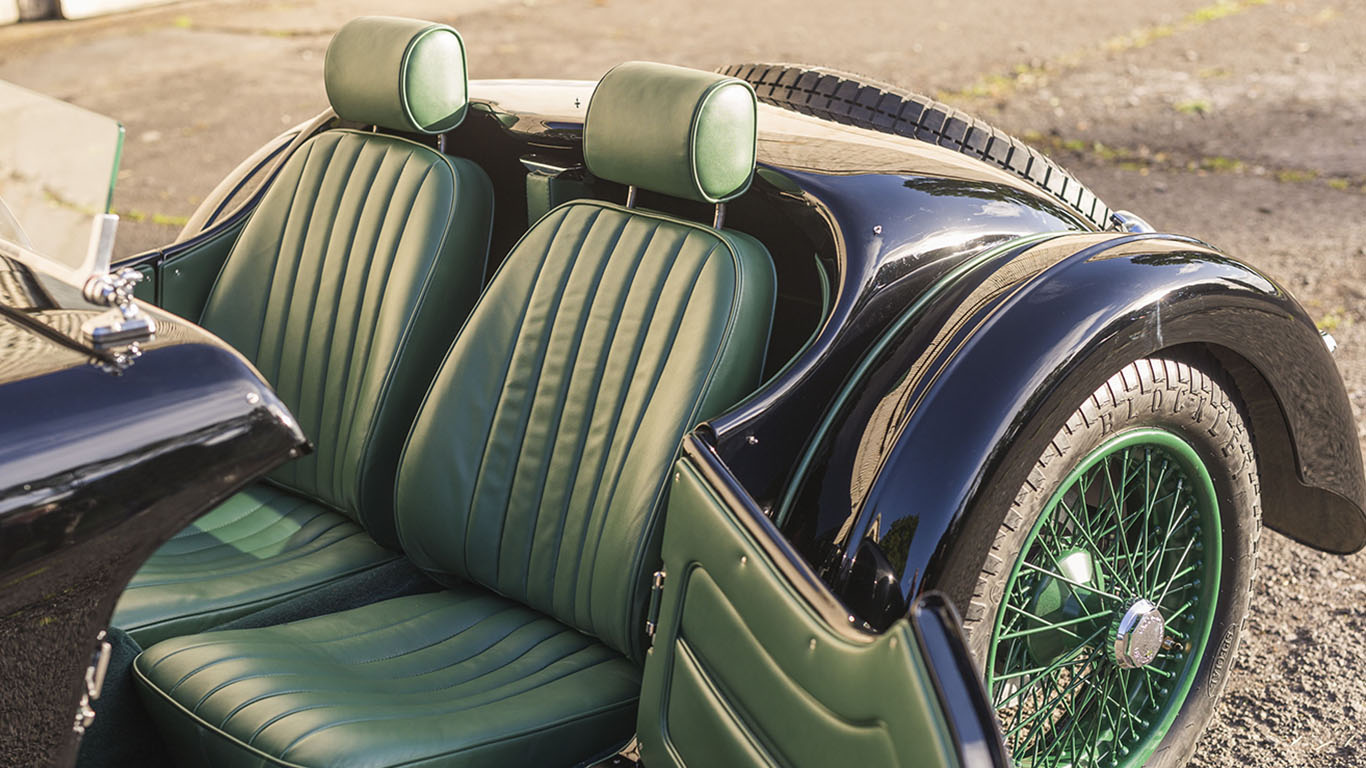 Only if you lift the engine cover, and come face-to-face with 2017-spec black plastic, is the vintage illusion briefly shattered. But this is a pre-production and ongoing development car: Martyn ensures me customer engines will be much better presented.

The motor itself comes from Ford in the US: a 2.5-litre naturally-aspirated four-cylinder developing “around 200hp and 200lb ft of torque”. It’s mated to a five-speed manual gearbox (also from Ford) that drives the rear wheels. The side-exit exhaust is located somewhere just below the driver’s right elbow. And – oh yes! – it’s loud.

Track to the past 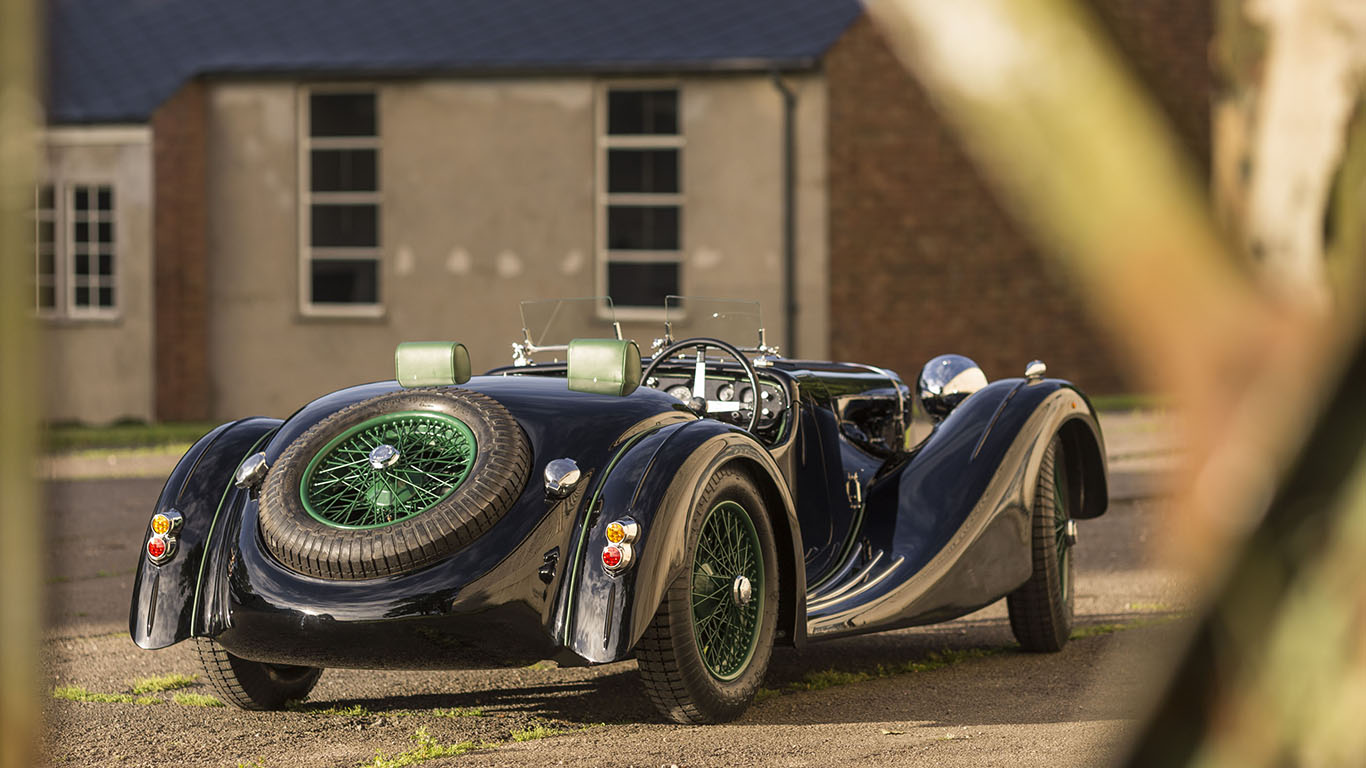 Twist the key and the engine barks brusquely into life. The pedals are offset and the footwell cramped, despite a lower floor than the original car – a necessary tweak for the taller drivers of today. I grasp the huge steering wheel, which has a beautifully engraved emblem of Atalanta – a huntress from Greek mythology – at its centre, and gaze along the long, louvred bonnet.

One great advantage of Bicester Heritage is the aircraft runway next door. And today, with help from a few strategically-placed cones, it will be our racetrack. Chocks away! 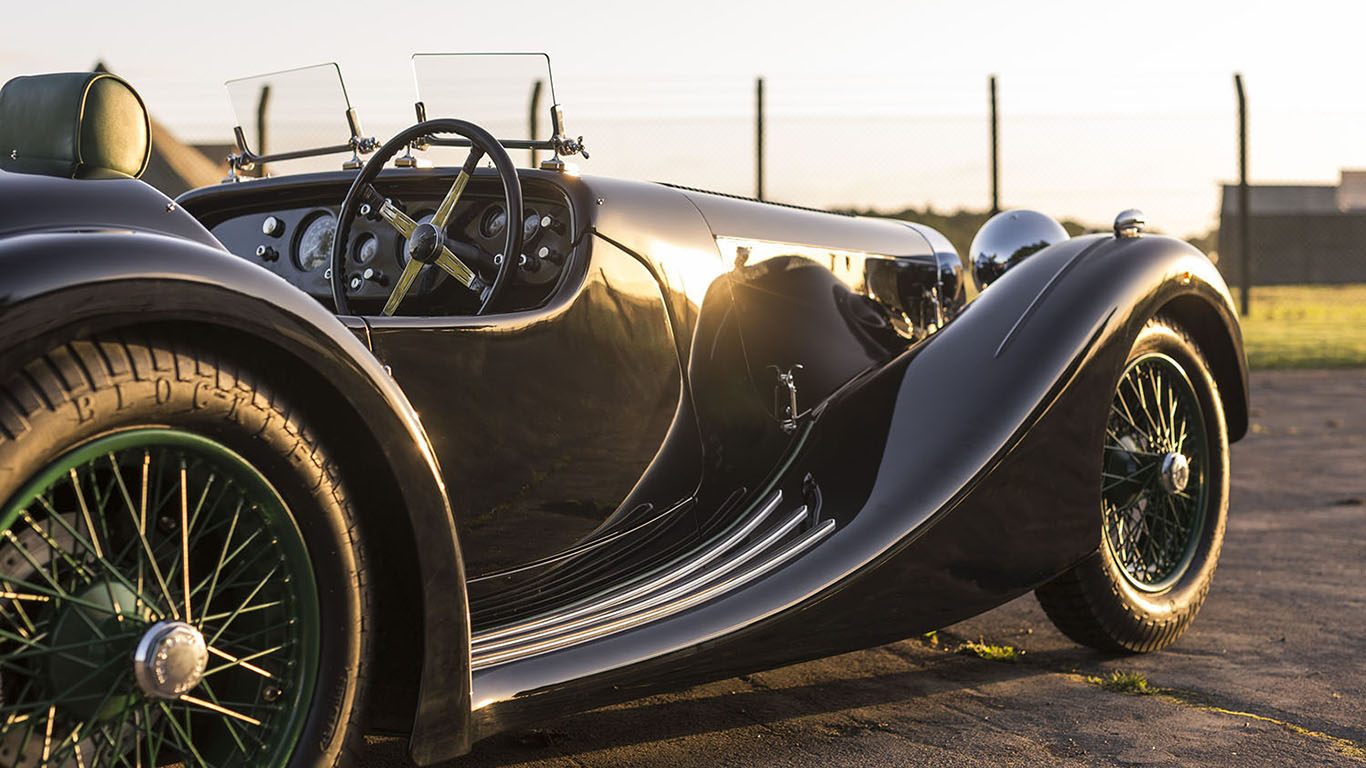 You might expect a chassis designed in the 1930s to betray its limitations on-track. And you’d be right: the Atalanta is no Lotus Elise, especially on high-profile 550-18 tyres remanufactured for historic racing. Nonetheless, it feels benign and biddable through the tight turns of our improvised circuit.

The car’s natural tendency is to understeer; only if you deliberately provoke it will the tail break loose. I suspect it could be rather tricky in the wet, but you’re more likely be more concerned about the lack of weather protection than on-the-limit handling by then…

A car for driving 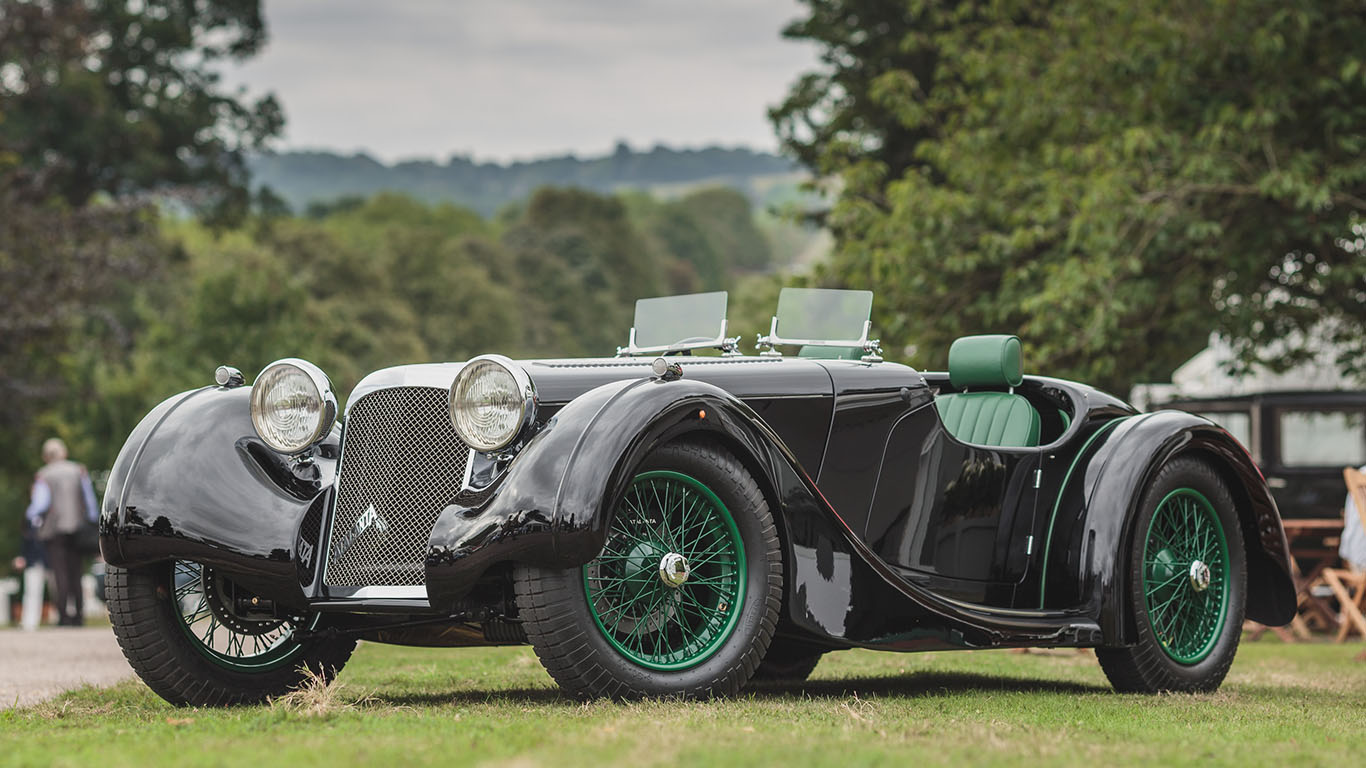 Lap after lap, I begin to adapt my driving style. The Atalanta appreciates deliberate inputs and doesn’t flatter your mistakes. Yet that makes it all the more rewarding when you get it right.

This is a physical car, then, but in the best sense. The unassisted steering has a weighty directness, the five-speed manual gearbox needs a positive shove and, in case you were in any doubt, there’s no electronic safety net. And all the time, the wind gusts around the low-cut doors and the engine blares boisterously. It’s an intoxicating assault on the senses. 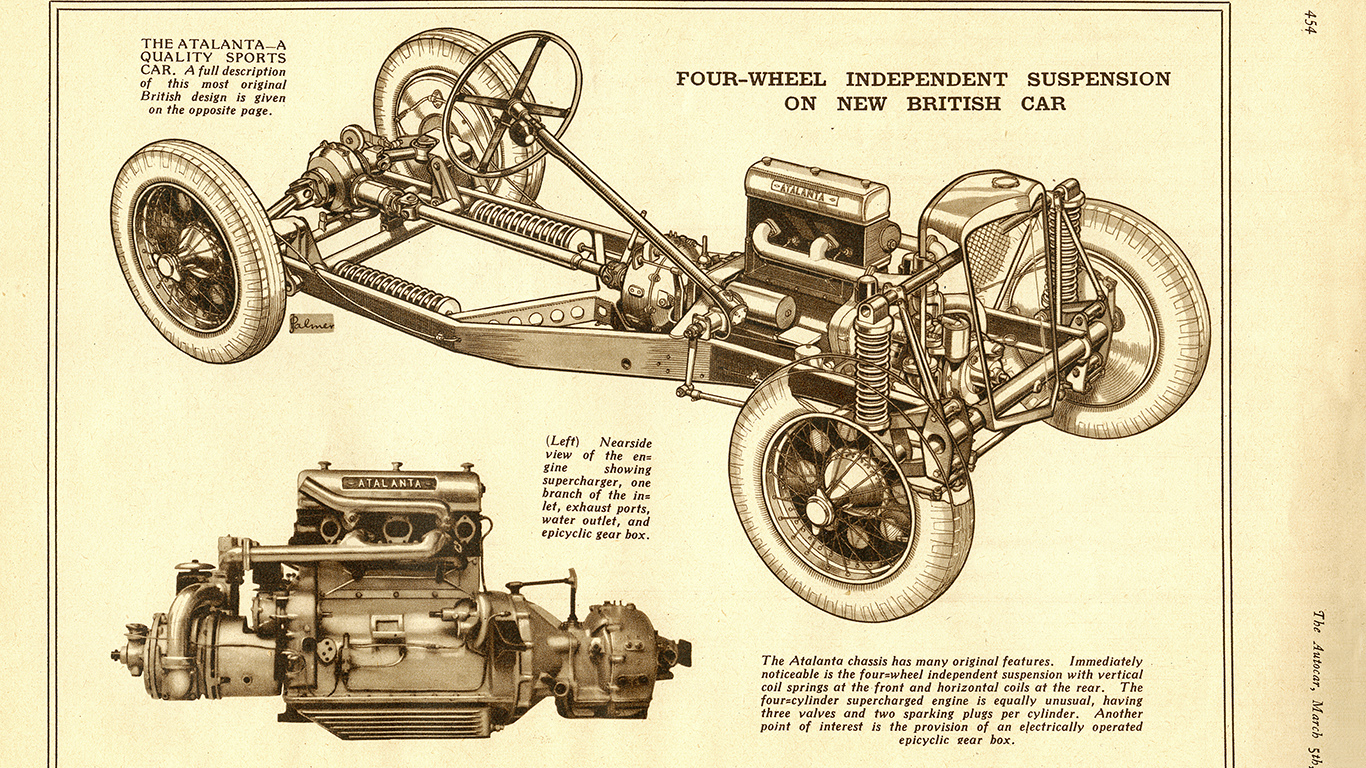 It’s fast enough to be fun, too. The 0-62mph dash takes seven seconds and top speed – if you find a long enough runway – is around 125mph.

That’s merely ‘warm hatch’ or Mazda MX-5 pace nowadays, of course. But as I’ll discover, this retro recreation works best when you take it steady. 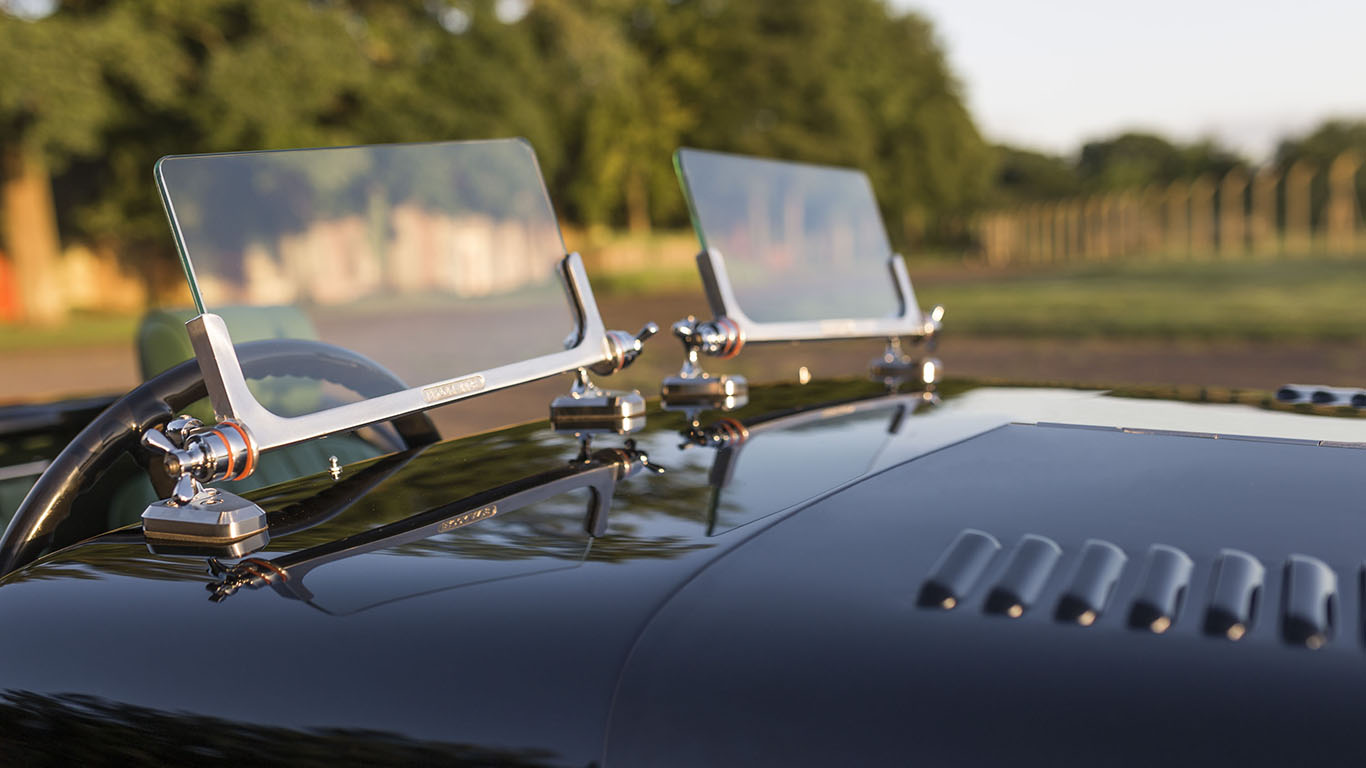 With Martyn in the passenger seat, we leave Bicester and head west towards the Cotswolds. Our route takes us down winding, tree-lined lanes, past packed country pubs and through immaculate, chocolate-box villages. Prime British sports car territory, in other words.

Away from the smooth surface of the airfield, the Atalanta’s ride occasionally gets choppy, but progress generally feels relaxed. The big-hearted Ford four feels well-suited to touring, too. This isn’t an engine that begs to be revved: just shift up early and ride the wave of muscular torque. 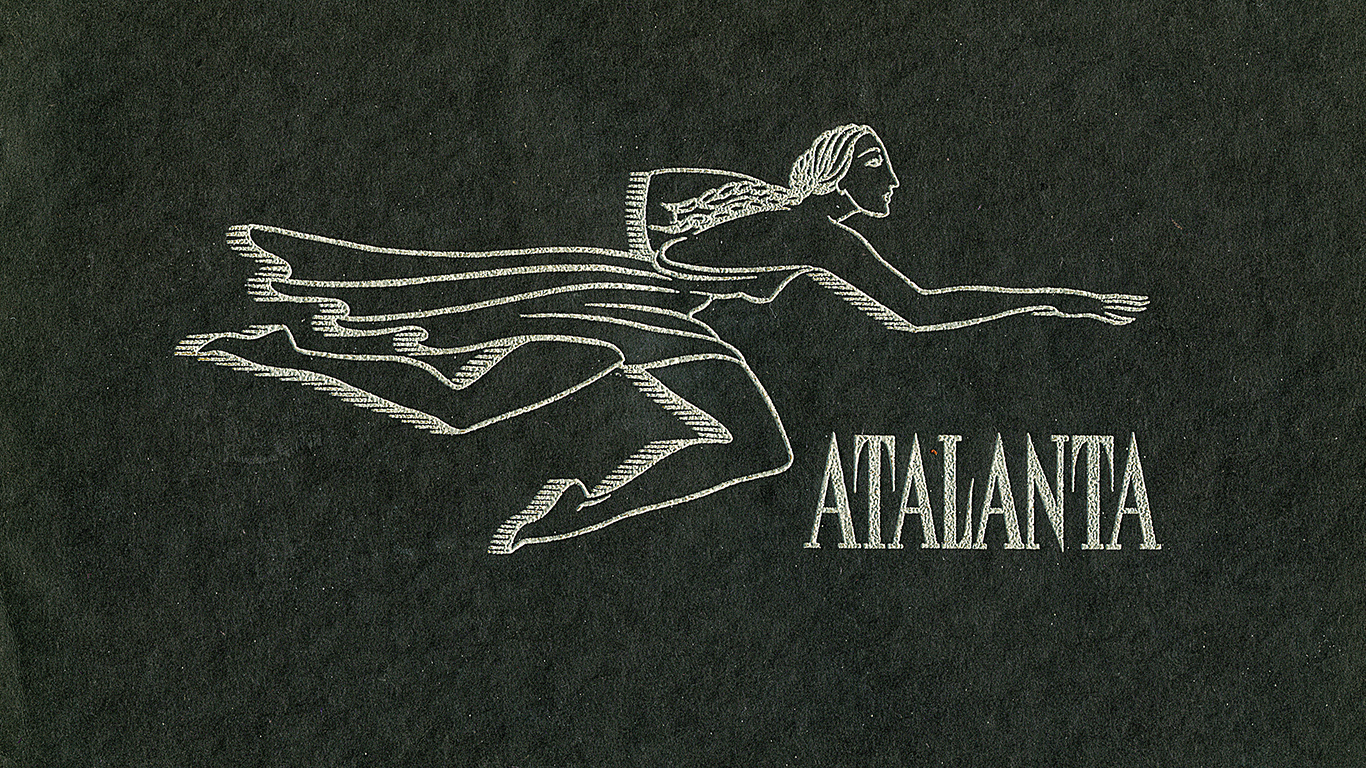 You never forget this is an ‘old’ new car, either. Martyn talks of “a 1930s experience with the rough edges removed” and, while I’ve never driven a real vintage machine, it’s very different to anything else. Better? No. Authentic and characterful? Absolutely, yes.

In many ways, the Atalanta is rather rudimentary. But that makes it the antithesis of the anaesthetised modern car – exactly as you’d hope. As the clouds clear and we blat between hedgerows, the sun glinting off its curvaceous front wings, it feels just about perfect. 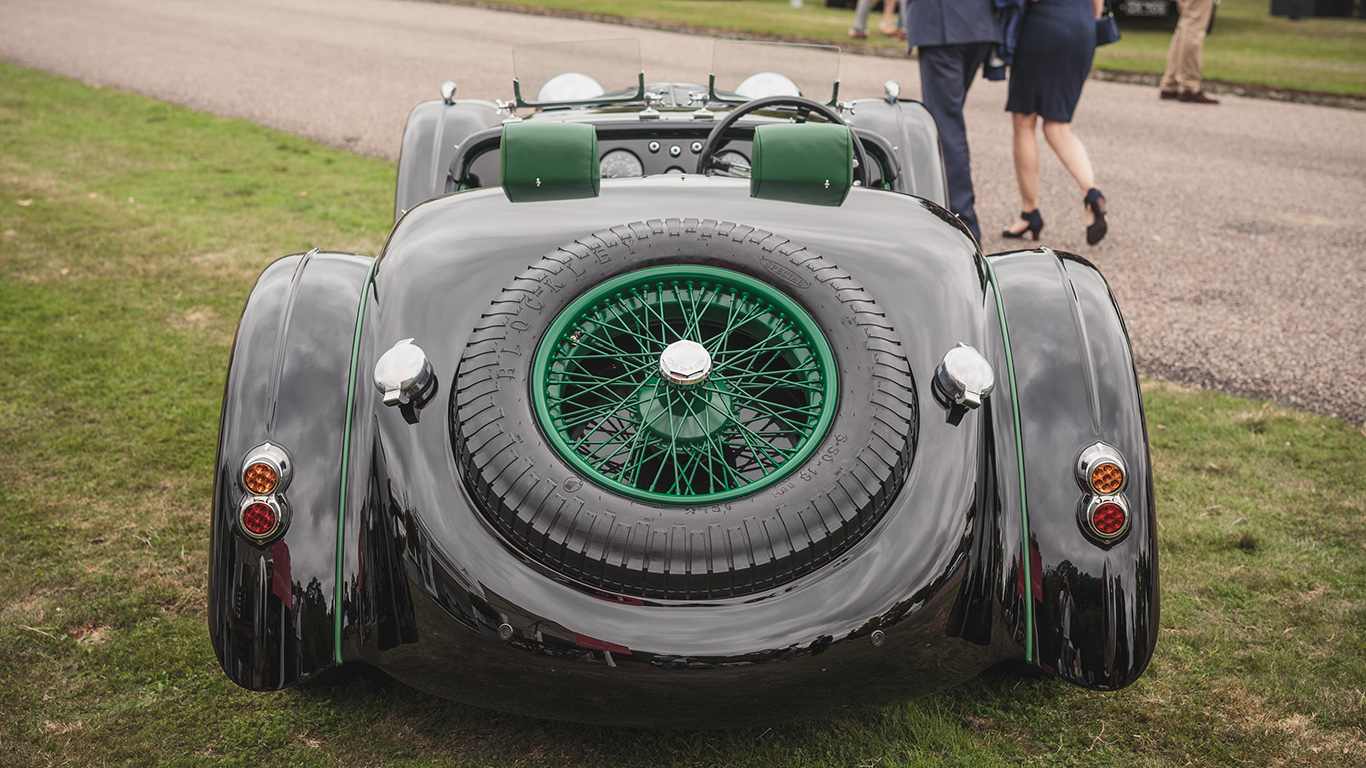 There’s another reason to go slowly, of course: the admiration of onlookers. Pull up at The Fox and Hounds in a £150,000 Porsche and you’ll get grudging acknowledgement at best. Here, no such preconceptions apply – everyone is drawn to the glamorous lines and the raucous exhaust rumble.

The mystique of the Atalanta badge doubtless plays a part, too. Most car fans can recognise a Morgan, but this car – for now at least – remains something of an enigma. Precious few would suspect it was built in 2017. 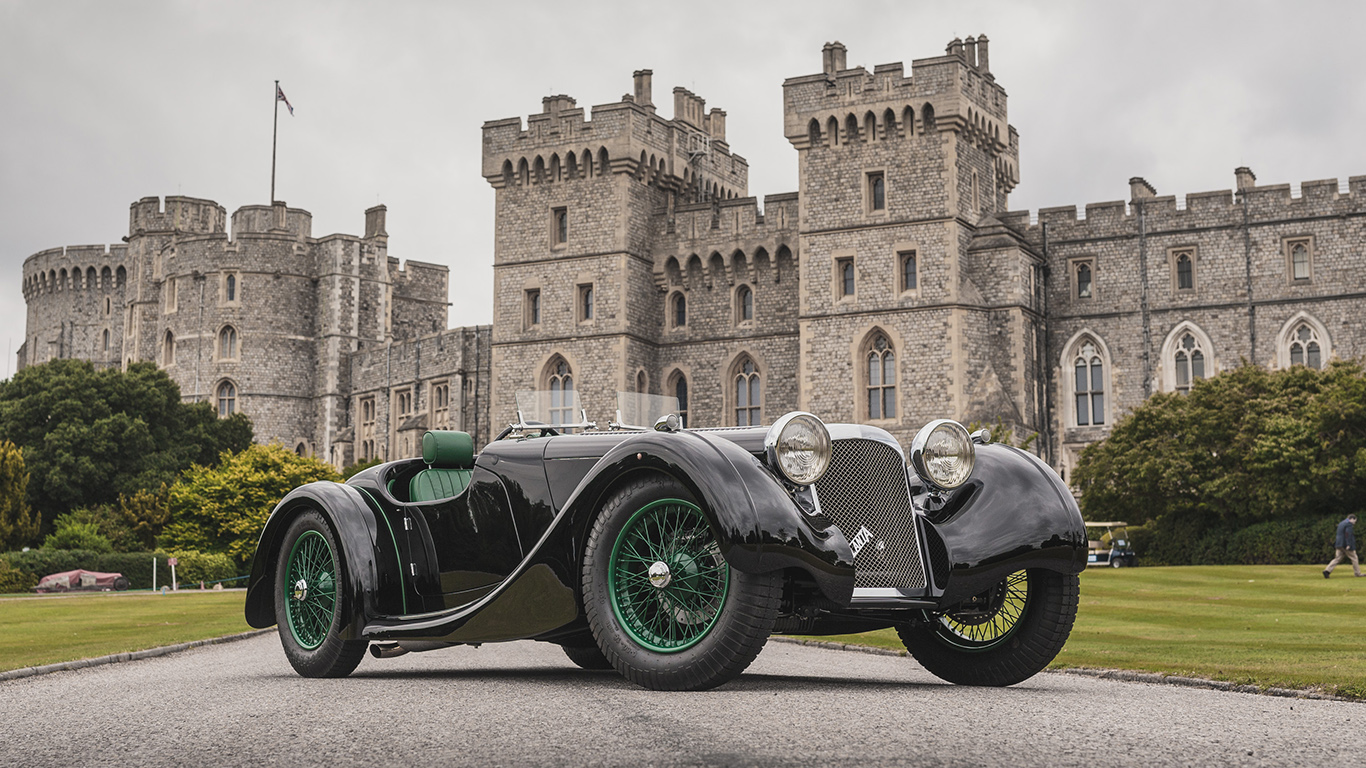 What matters for Atalanta today isn’t winning Le Mans. Martyn’s goal is to find a niche and offer something genuinely different: new, but steeped in the spirit of the past. After all, most people who buy his roadster will already have a large collection of cars.

In that, he has succeeded. This is a car to be savoured on sunny Sunday mornings, when the roads are quiet and you can pretend it’s 1937 again (just without impending threat of fascism and war). Beautiful and beguiling, the Atalanta roadster will make you feel good about driving it. And what’s not to love about that?

Vauxhall will give you £1,000 more than WeBuyAnyCar for your part-exchange

Vauxhall has made a van for businesspeople

It's your boardroom on wheels
Read more

It's a feat many humans struggle with
Read more

Ford is launching an esports team to go virtual racing

Tuning company offers F-150 in two distinct flavors for on- and off-road use, both with the promise of 650 horsepower from supercharged engines
Read more