Some product placement just works. When Sean Connery screeches through a warehouse in an Aston Martin DB5, we cheer inwardly. When Daniel Craig swigs a bottle of Heineken, we reach for the imaginary sick bag.

The link between 007 and Aston Martin begins with Ian Fleming’s very first book and, despite occasional dalliances with other car brands, continues to this day. Even Aston’s new in-house personalisation department is called ‘Q’ – a knowing nod to the MI6’s fictional gadget-maker.

All of which, in a rather roundabout way, brings us to Dylan Miles: a classic car collector and dealer who, at the time of our visit, had no less than three ‘Bond’ Aston Martins in stock.

Just to be clear, these cars – a DB Mk III, DB5 Vantage and V8 Vantage – aren’t the actual celluloid stars, yet all three have been immortalised by Bond. One also has another, somewhat surprising, celebrity connection.

Read on to see our highlights from Dylan’s secret West Sussex warehouse. 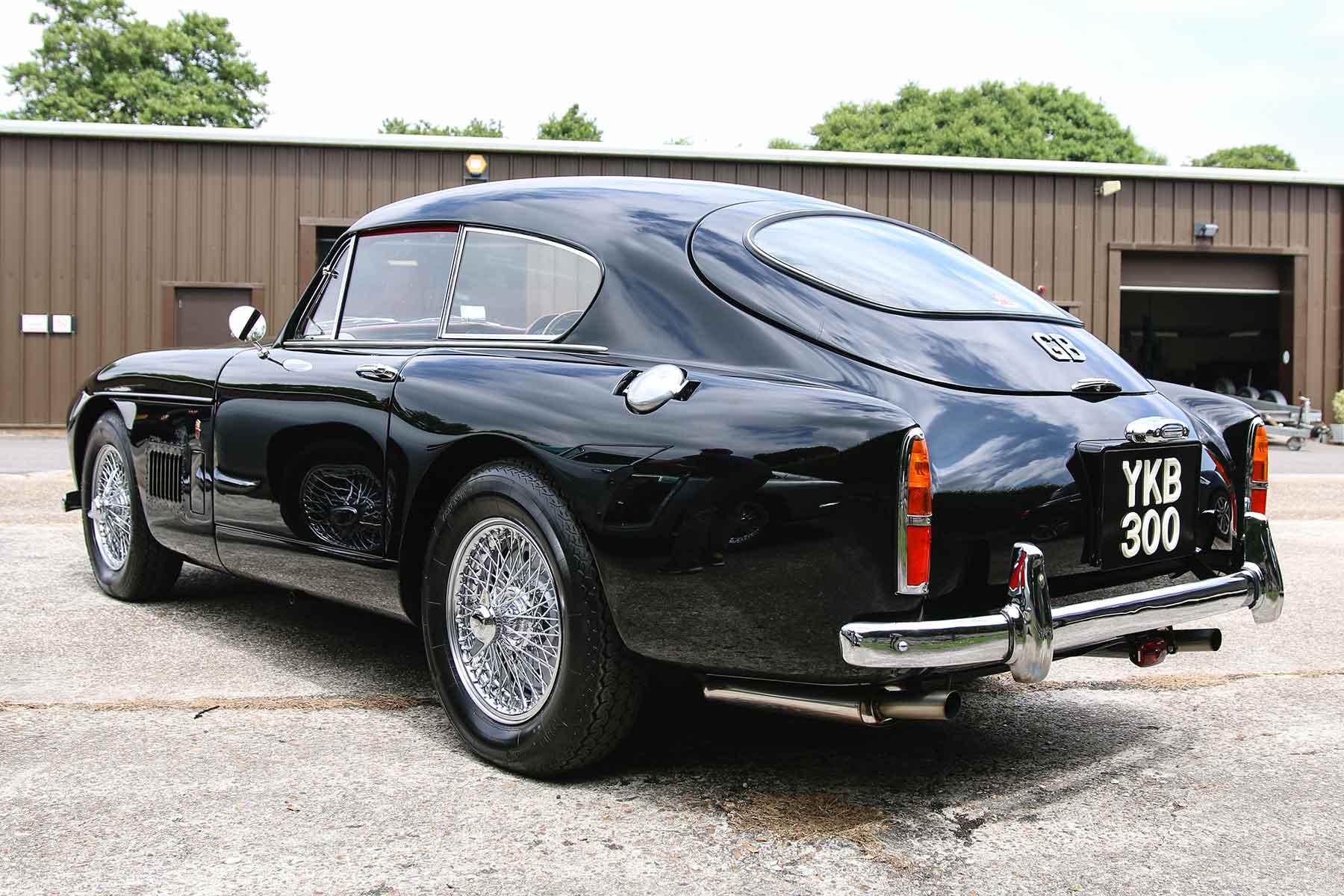 Doesn’t look familiar? That’s because this Aston Martin only featured in the 1959 novel version of Goldfinger. By the time of the 1964 film, Bond’s wheels were updated to the then-current DB5.

Officially known as the DB 2/4 Mark III – and referred to simply as a ‘DB III’ in the book – the Mk III was a luxurious four-seater GT with a practical hatchback tailgate. Its 2.9-litre straight-six produced 178hp with the optional dual exhausts fitted here – good for a 120mph top speed.

This breathtakingly immaculate 1957 DB III was restored to concours standard in 2008 and, by the time you read this, will be en route to its lucky new owner in Hong Kong.

Even those with zero interest in cars will recognise this one. The DB5 is James Bond, having featured in no less than eight films: Goldfinger, Thunderball, GoldenEye, Tomorrow Never Dies, The World Is Not Enough, Casino Royale, Skyfall and Spectre.

Jay Kay of Jamiroquai bought the DB5 in 1994 and commissioned a full restoration – including a respray from Fiesta Red to Bond-style Silver Birch. 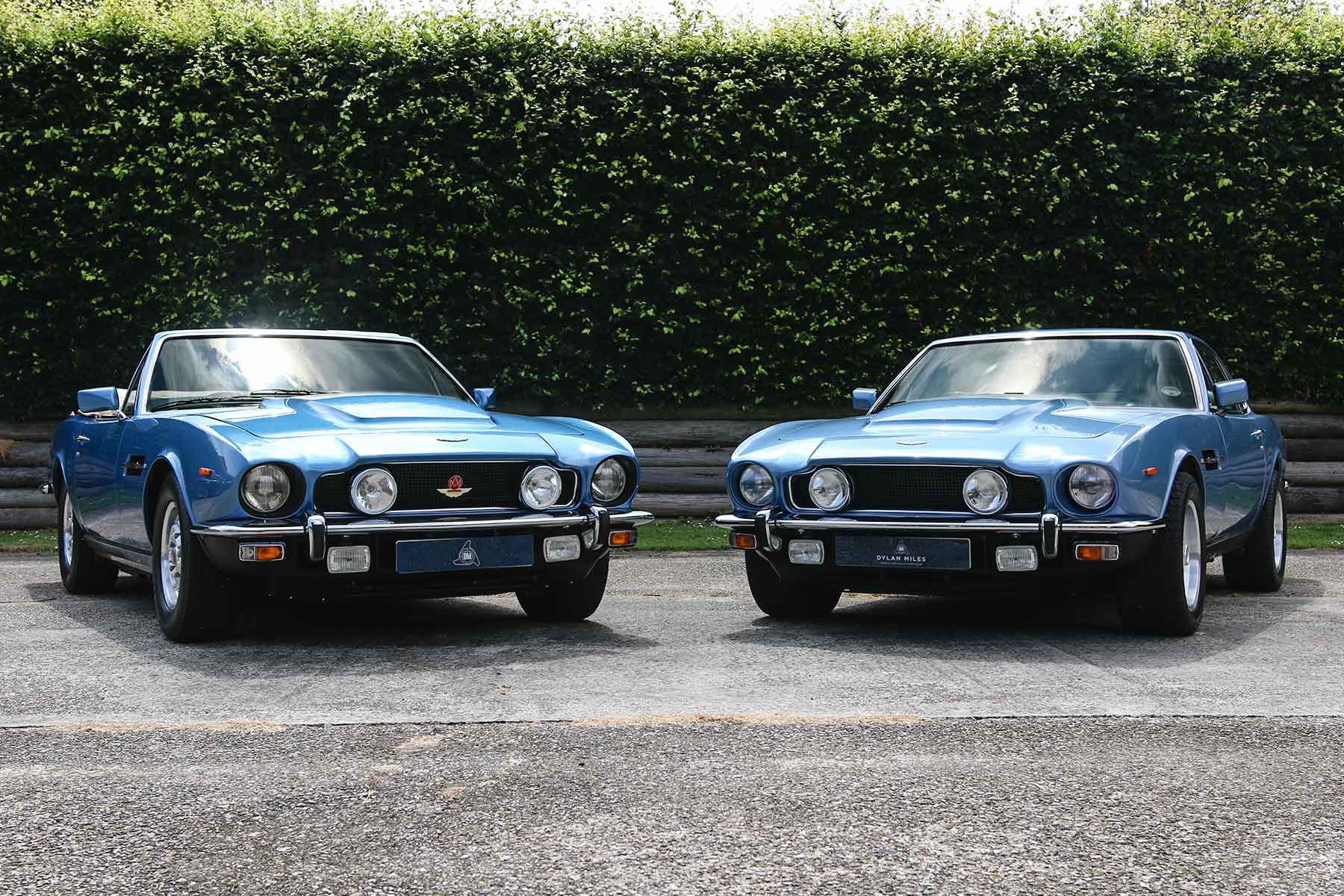 It seems fitting that Dylan Miles had near-identical coupe and Volante (convertible) versions of the Aston Martin V8 in stock, since Timothy Dalton drives both in The Living Daylights. Well, kind of…

The Vantage Volante used by Dalton at the start of the film was actually a pre-production car owned by Victor Gauntlett, the charismatic Aston chairman who had negotiated the marque’s return to the big screen. Later on, it visits Q Branch to have a hard-top fitted, along with tyre spikes, heat-seeking missiles and a jet engine. 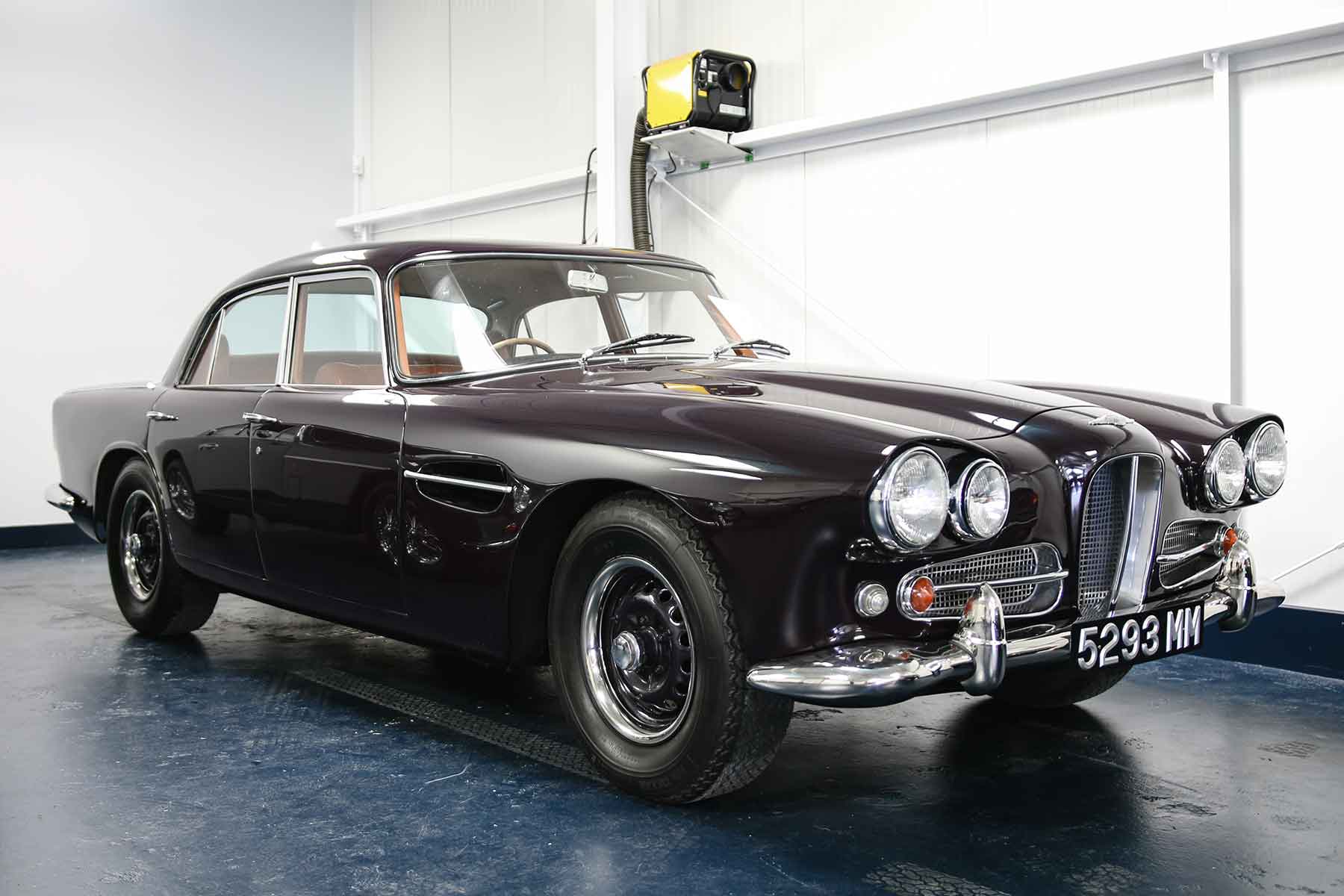 Now for a rather different Aston Martin – and one that’s never been driven by James Bond esq. Instead, this 1961 Lagonda Rapide was the property of David Brown himself, who used it as his personal car until 1964.

Brown from some angles, aubergine from others, the name of the Lagonda’s paint colour is Roman Purple. This was the pre-production prototype and its favourable reception from press and customers led to production of a further 54 cars. The Cartier family apparently ordered one trimmed in mink.

Never seen one of these before: 1961 Lagonda Rapide.

This was the factory prototype and press car, later owned by David Brown. pic.twitter.com/F35uKRqkHF

The car started life with a 3.7-litre DB4 engine, but this was later replaced with a 4.0 DB5 unit – as per the other 54 cars. You couldn’t call it beautiful, but this four-door Aston saloon is stately, commodious and very rare. 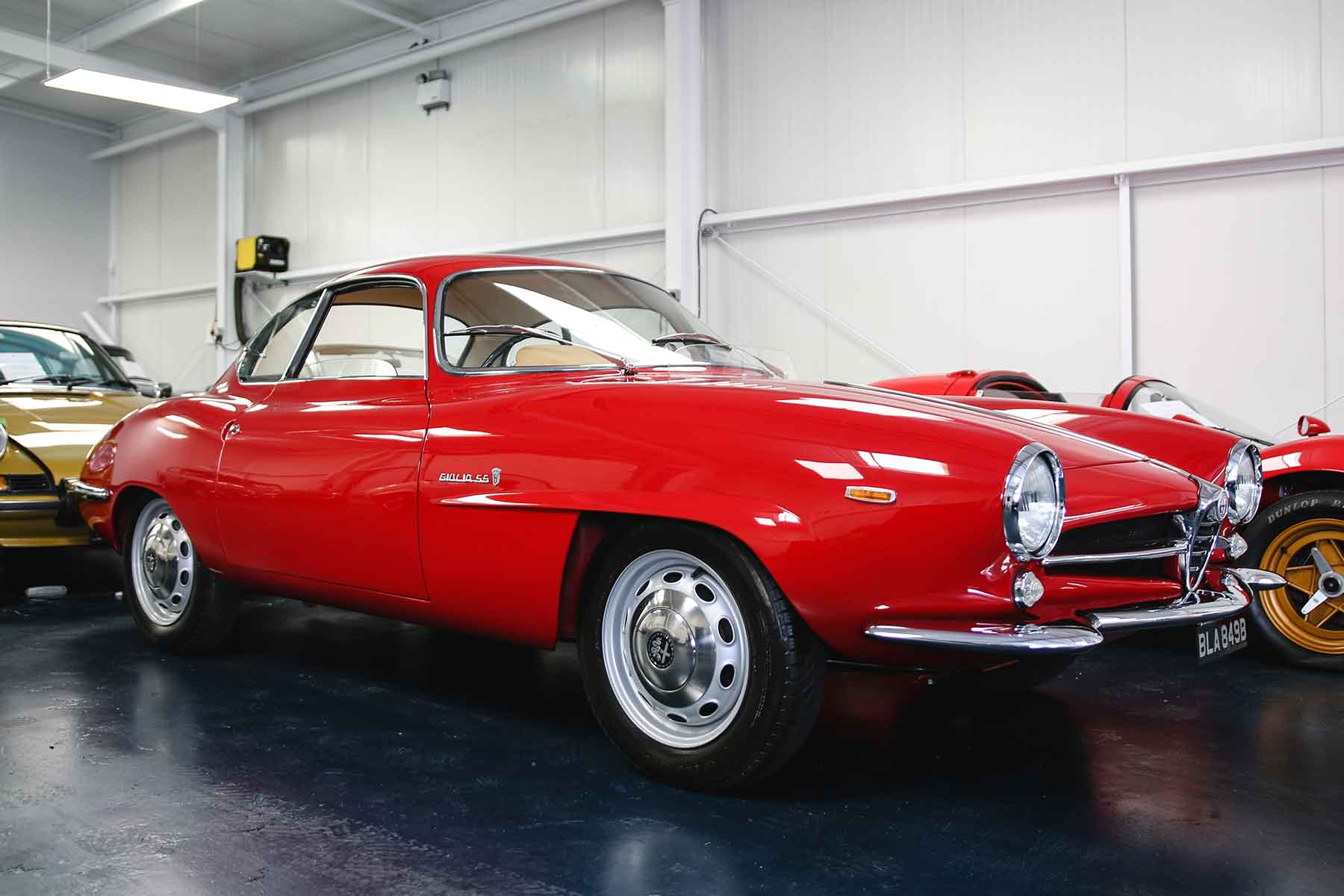 Here’s a car that anyone with at least one functioning eyeball will find beautiful. This Alfa Romeo Giulia Sprint Speciale is one of 1,400 made and 25 converted to right-hand drive by Ruddspeed when new. It arrives fresh from a 1,300-hour restoration.

Those voluptuous lines are by Bertone, while that colour is, of course, Rosso Corsa, the Italian racing red more commonly seen on Ferraris. The interior has been retrimmed in British Connolly leather with Wilton carpets.

Powered by a 112hp 1.6-litre engine, the Giulia SS has a top speed of 120mph. Dylan Miles recently sold this example for an undisclosed amount. 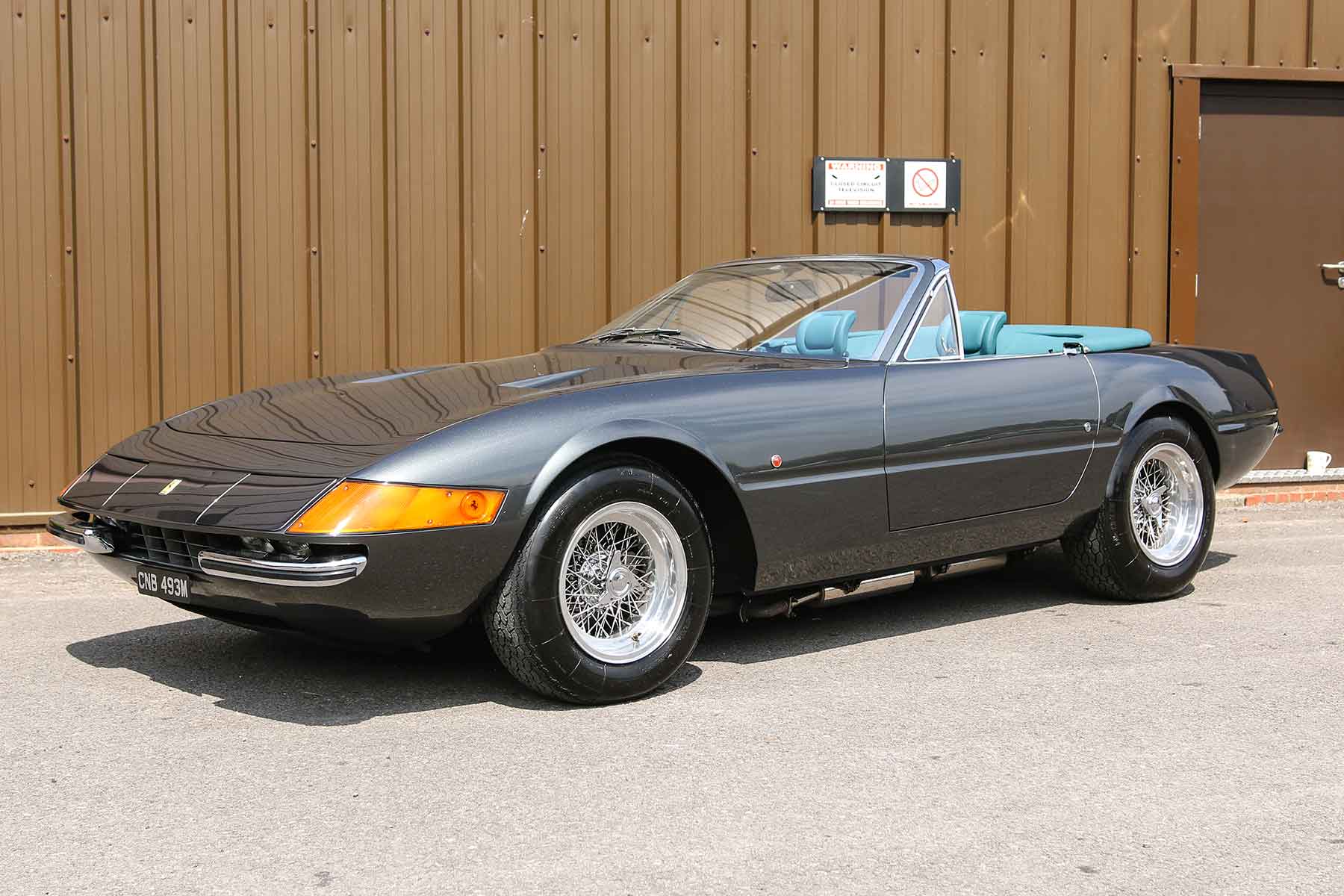 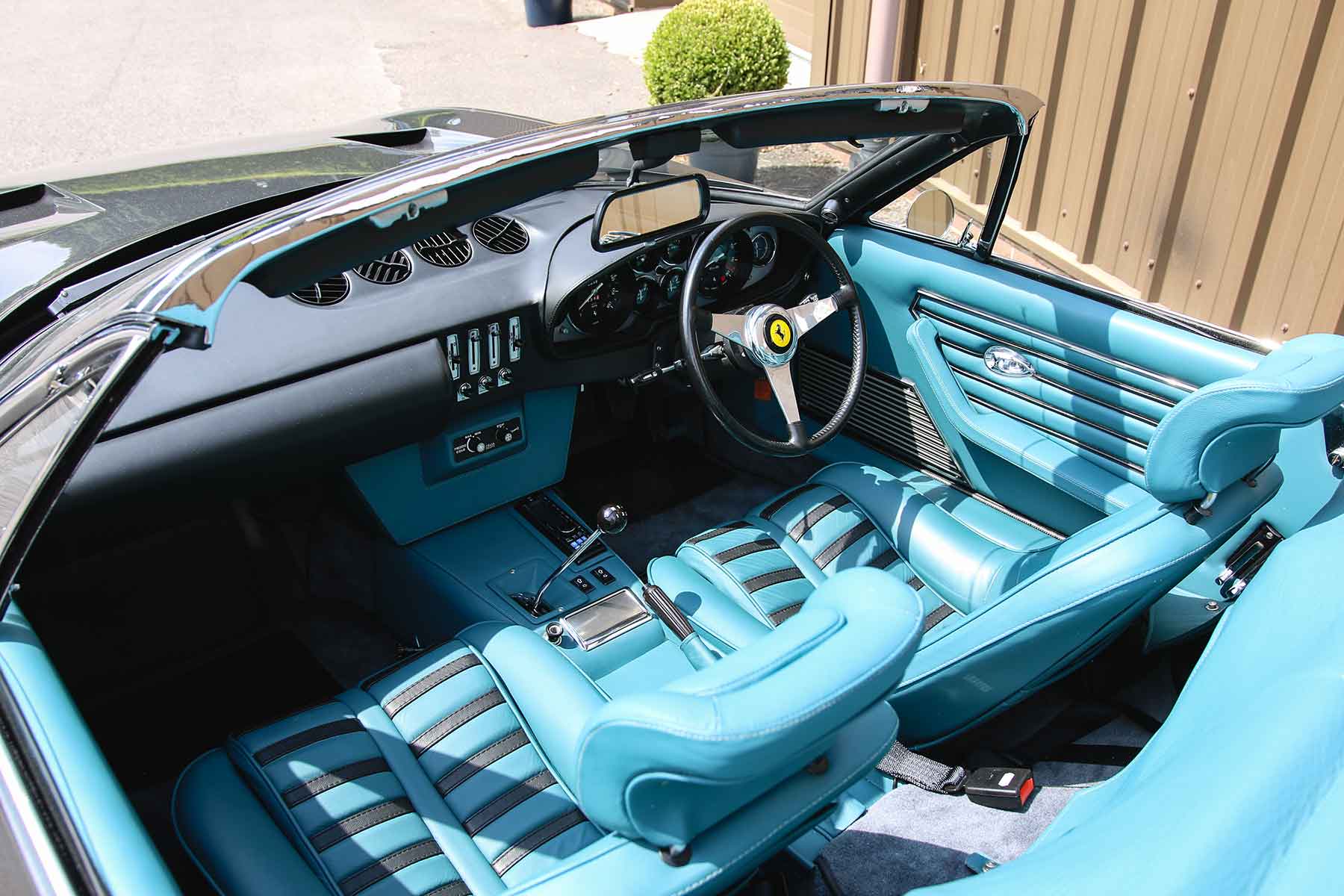 Ferrari only made 122 open-top 365 GTB/4 Spyders… and this isn’t one of them. Nonetheless, the former coupe – converted at a cost of £50,000 in 1989 – is still stunning. Even if we’re not entirely sold on that turquoise leather interior.

Under that very long bonnet is a 352hp 4.4-litre V12, giving the ‘Daytona’ (as it quickly became known) a 174mph top speed. It was also a surprisingly successful racer, taking three GT class wins at Le Mans.

Dylan, whose father used to own a Daytona, is clearly a fan. “It’s one of the greatest cars ever made,” he says. 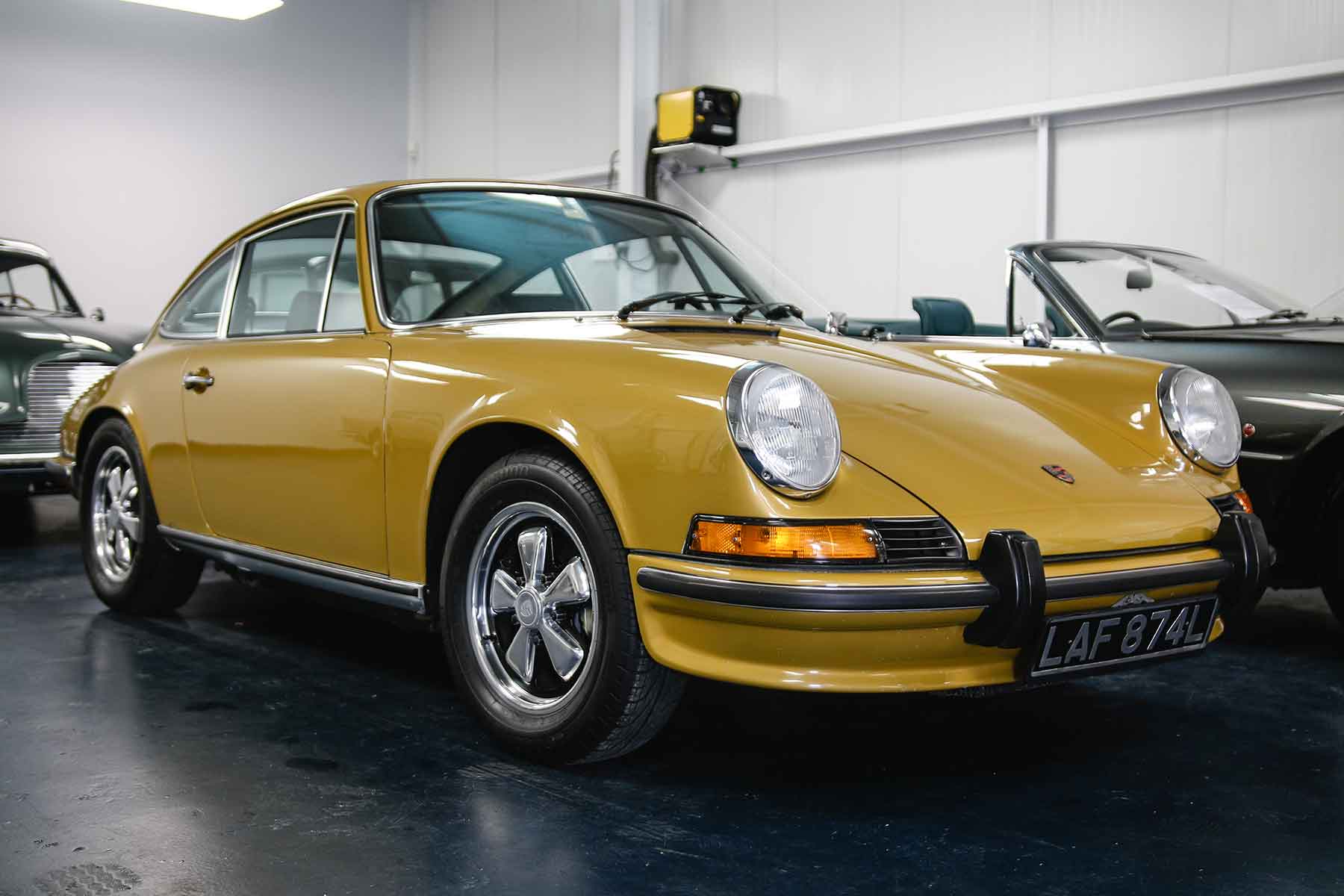 Speaking of the ‘greatest cars ever made’, the venerable Porsche 911 is surely in with a shout? First launched in 1963, it has evolved over six (soon to be seven) generations without losing its focus on driving excitement.

The 2.4S is one of the most desirable early 911s – and Porsche’s flagship until the legendary 2.7 RS arrived in 1973. This 1972 car was originally exported to California and is finished in an oh-so-seventies shade of metallic gold.

Interestingly, it’s also one of a minority with the four-speed ‘Sportomatic’ clutchless manual gearbox. This requires the driver to change gear using a conventional lever, but has an automatic-style torque converter instead of a flywheel.