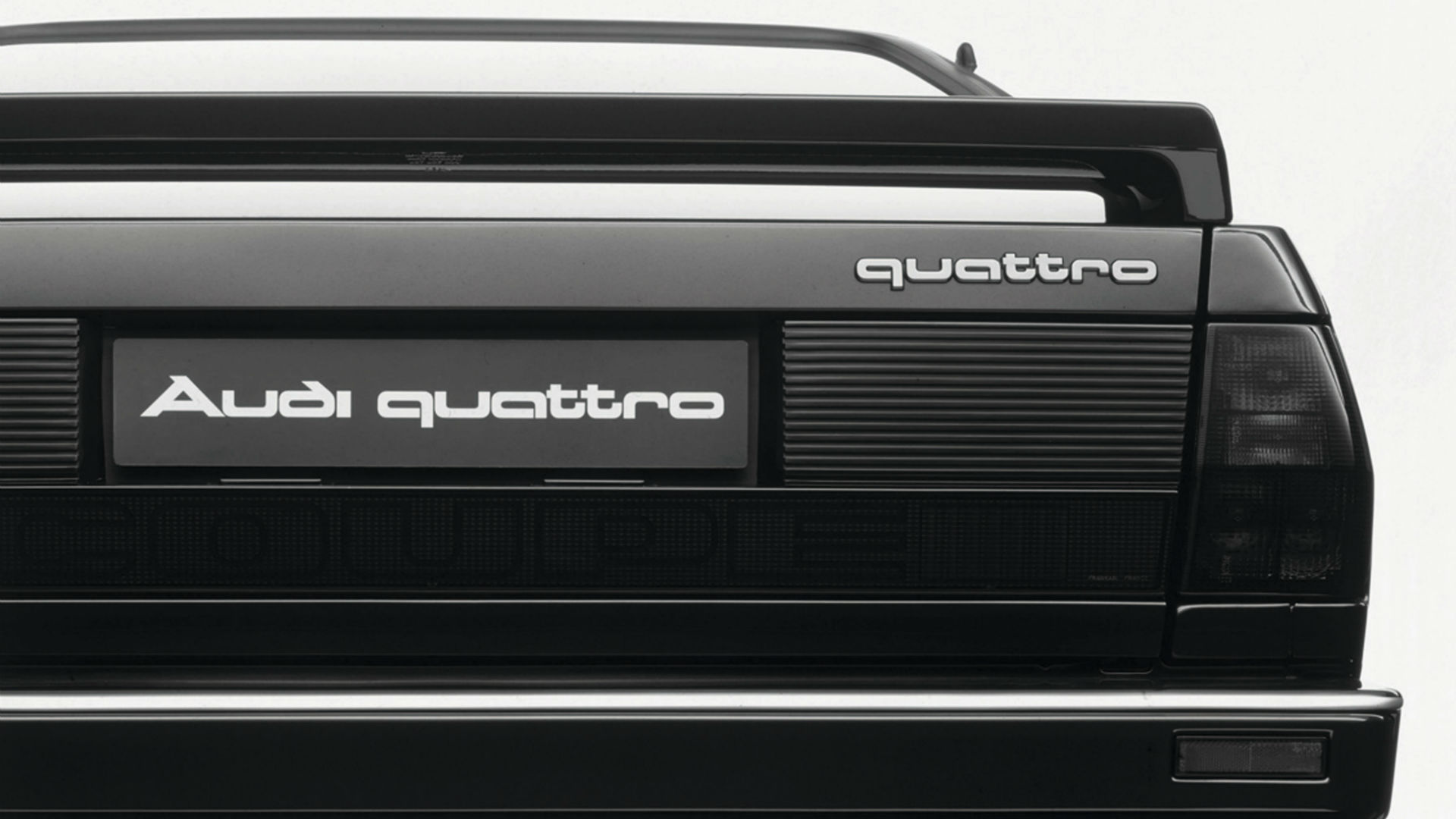 An automotive legend is celebrating its 40th anniversary in 2020. Yes, ‘legend’ is an overused word, but the Audi quattro (note the use of a lower case ‘q’) was a genuine game-changer, not just for the company, but for world rallying and the industry as a whole. To mark the occasion, some of the finest examples of the quattro will be showcased at the London Classic Car Show at the end of the month. To whet your appetite, here’s a very brief history of the car, along with details of the cars that will be on display at Olympia in London. 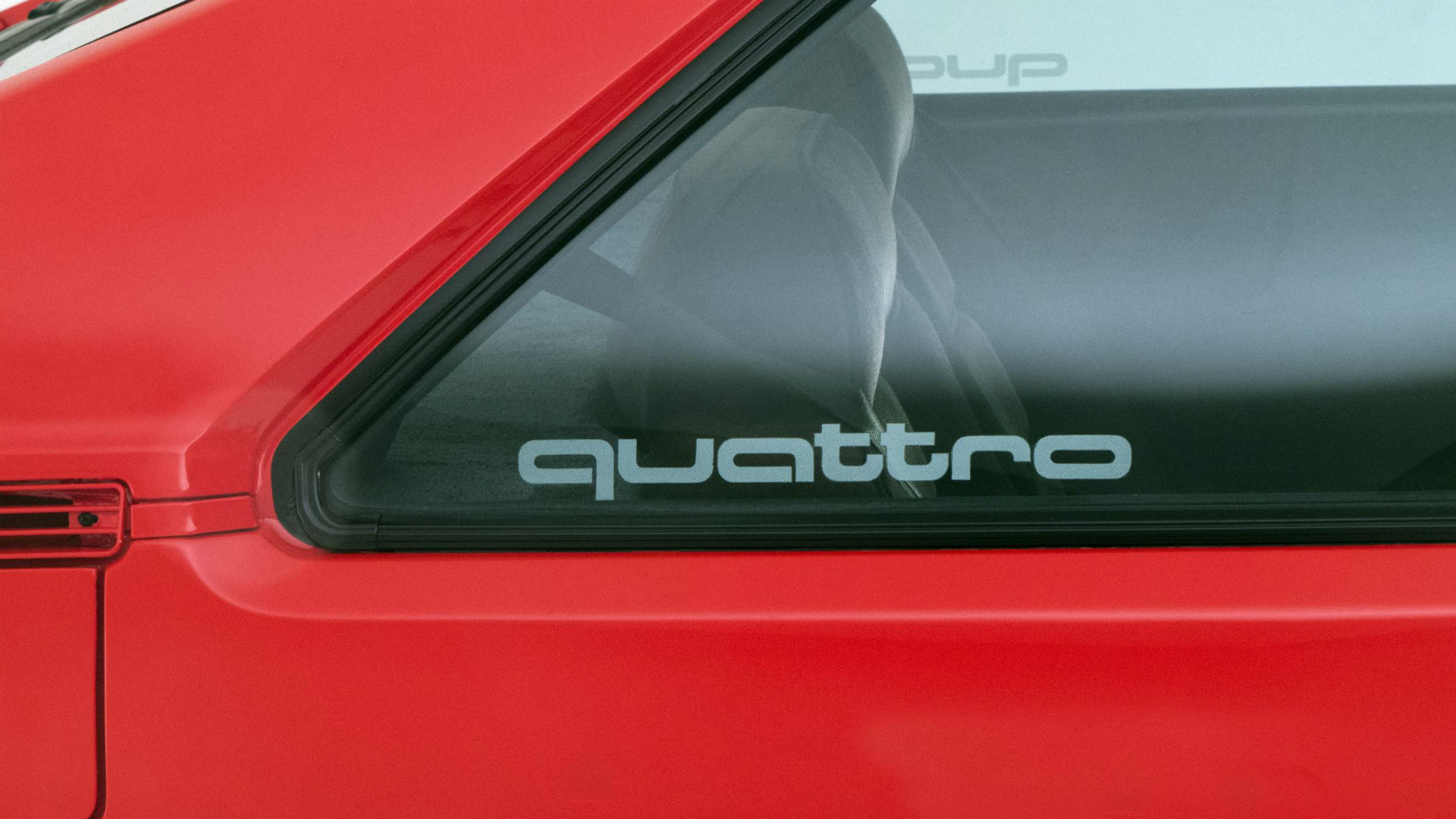 The editorial style guide demands the use of an uppercase Q when referring to the Audi quattro or the company’s four-wheel-drive system. But as it’s the car’s birthday, the editor might let this one slip through. Besides, having contacted Audi for clarification on the ‘q’ versus ‘Q’ debate, the Rally Group B Shrine website received a definitive response from the Audi Corporate Archives. ‘The official spelling is always quattro with a small ‘q’ referring to the car model’. Let’s see if the lowercase ‘q’ makes it beyond the subbing knife. 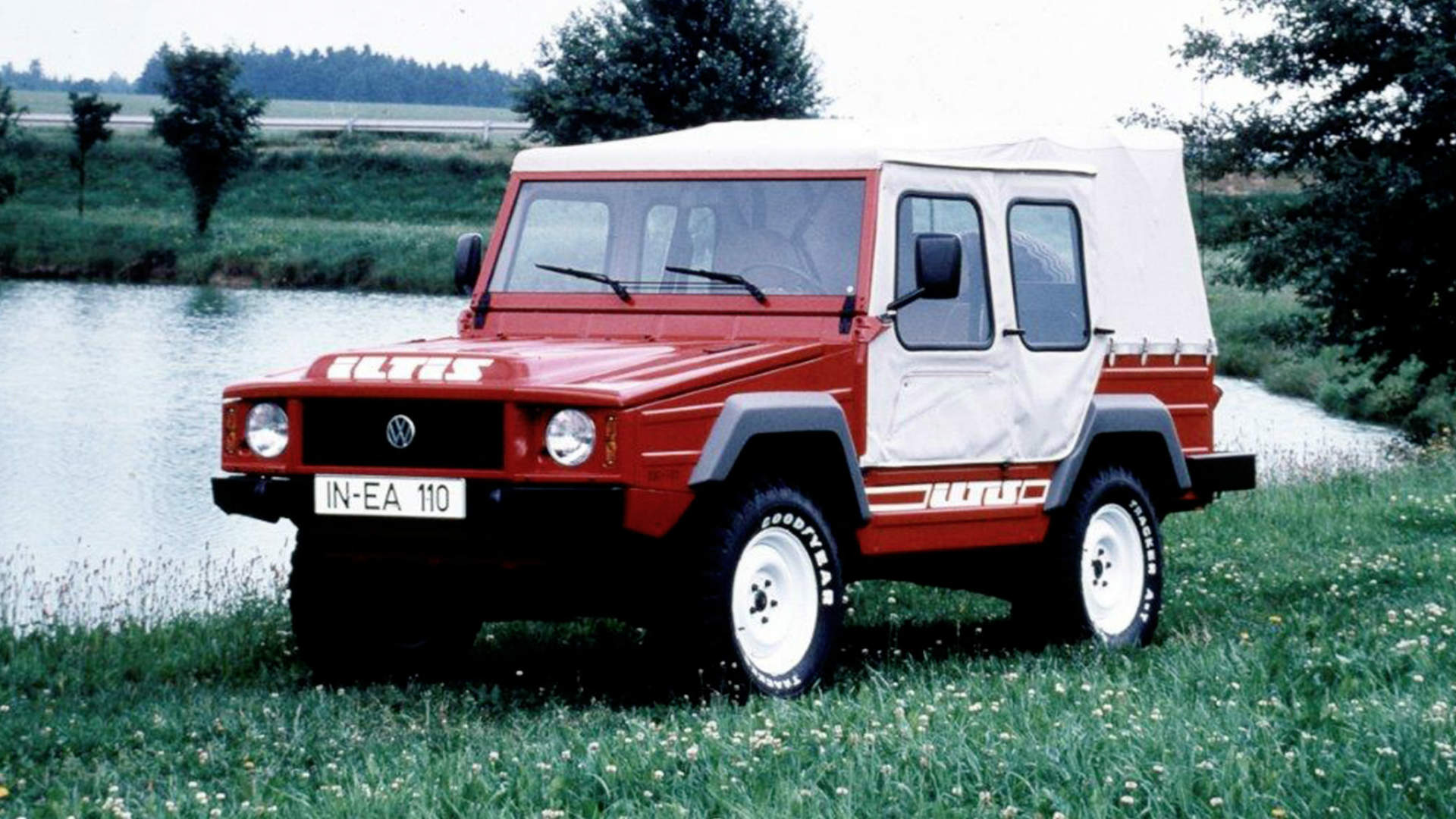 The story of the Audi quattro begins in February 1977. The company’s chassis engineer, Jorg Bensinger, was in Finland sampling the off-road brilliance of the four-wheel-drive Volkswagen Iltis. The four-person military vehicle was developed for the German army and was built at Audi’s factory in Ingolstadt. Bensinger contacted Ferdinand Piech, then Audi’s technical director, with the idea of developing a four-wheel-drive version of the Audi 80.

From Finland to Austria and Switzerland 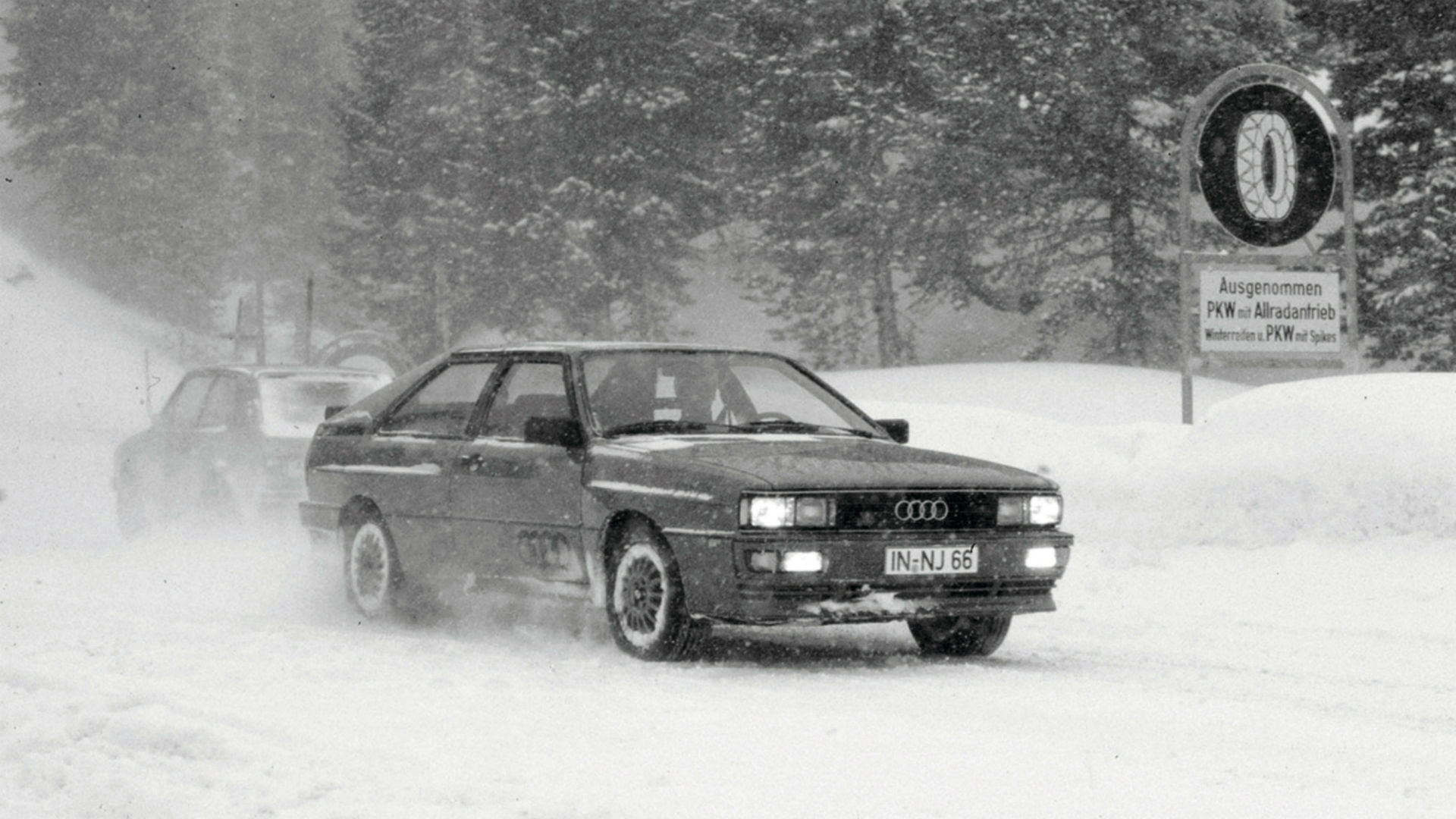 A four-wheel-drive passenger car would be groundbreaking. Although the Jensen FF of 1966 is credited with pioneering the concept, Audi took the technology to the masses. Project A1 was given the green light by the Audi board in September 1977 and given the number EA 262. Using the Volkswagen and Audi parts bins, not to mention the ingenuity of Bensinger’s team of engineers, a test vehicle was sent to the Turracher Hohe in Austria. It’s one of the steepest and highest roads in Europe, making it an ideal location for snow testing. The prototype was also given to the wife of Volkswagen’s development director for a shopping trip in Vienna. After she complained that the car was hard to park, the engineers added a centre differential. 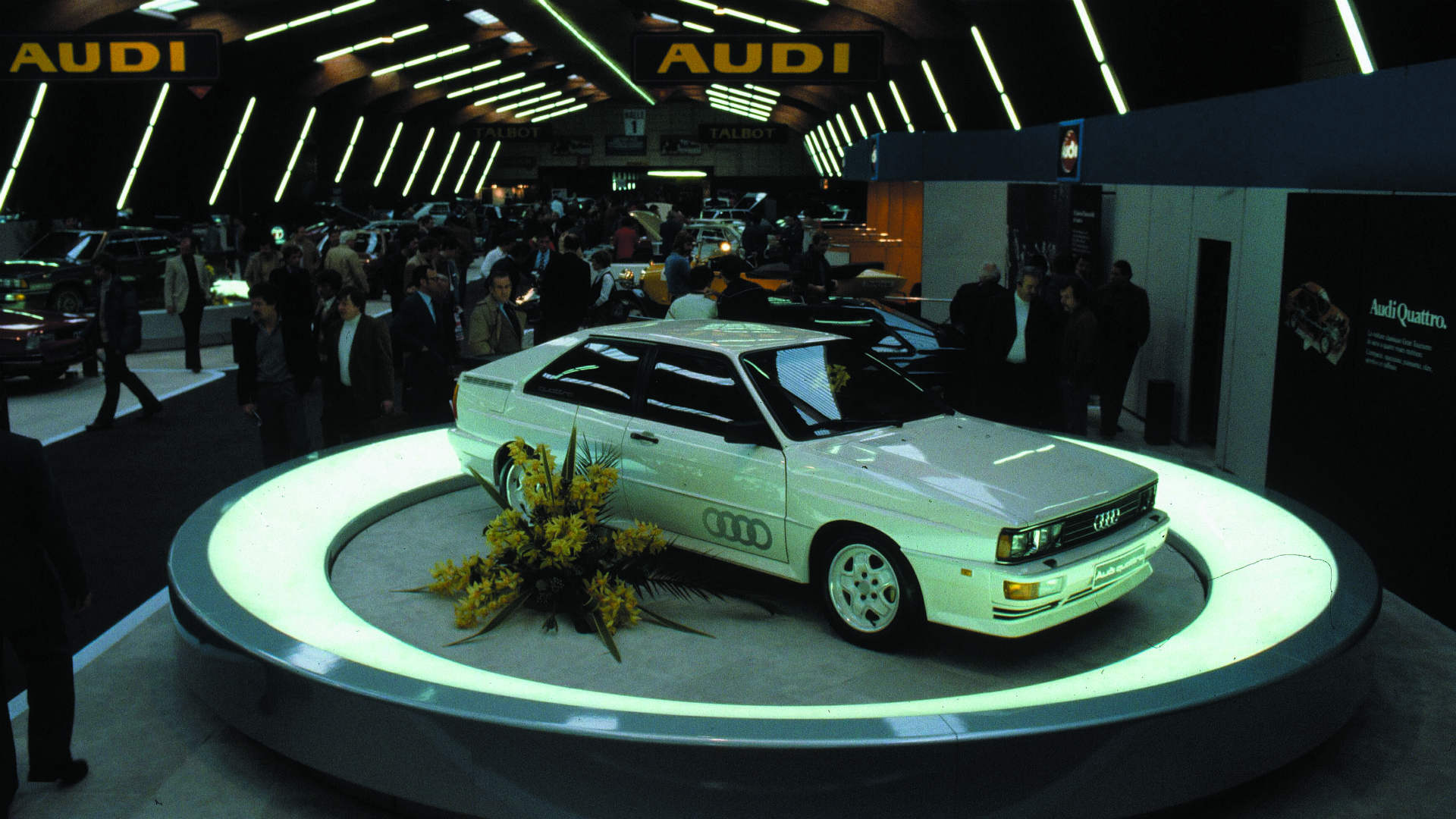 The production version made its debut at the 1980 Geneva Motor Show. The quattro redefined Audi, giving the company a glamorous edge, an enviable history in motorsport and highly marketable technology. The car was loosely based on the Audi 80, with power sourced from the 200 saloon’s 2.1-litre five-cylinder turbocharged engine. It produced 200hp, which was enough to propel the car to a top speed of 137mph, hitting 60mph in just 7.3 seconds. But the performance figures were only half the story, because few cars could match its cross-country pace. Even supercars were left trailing in its wake. 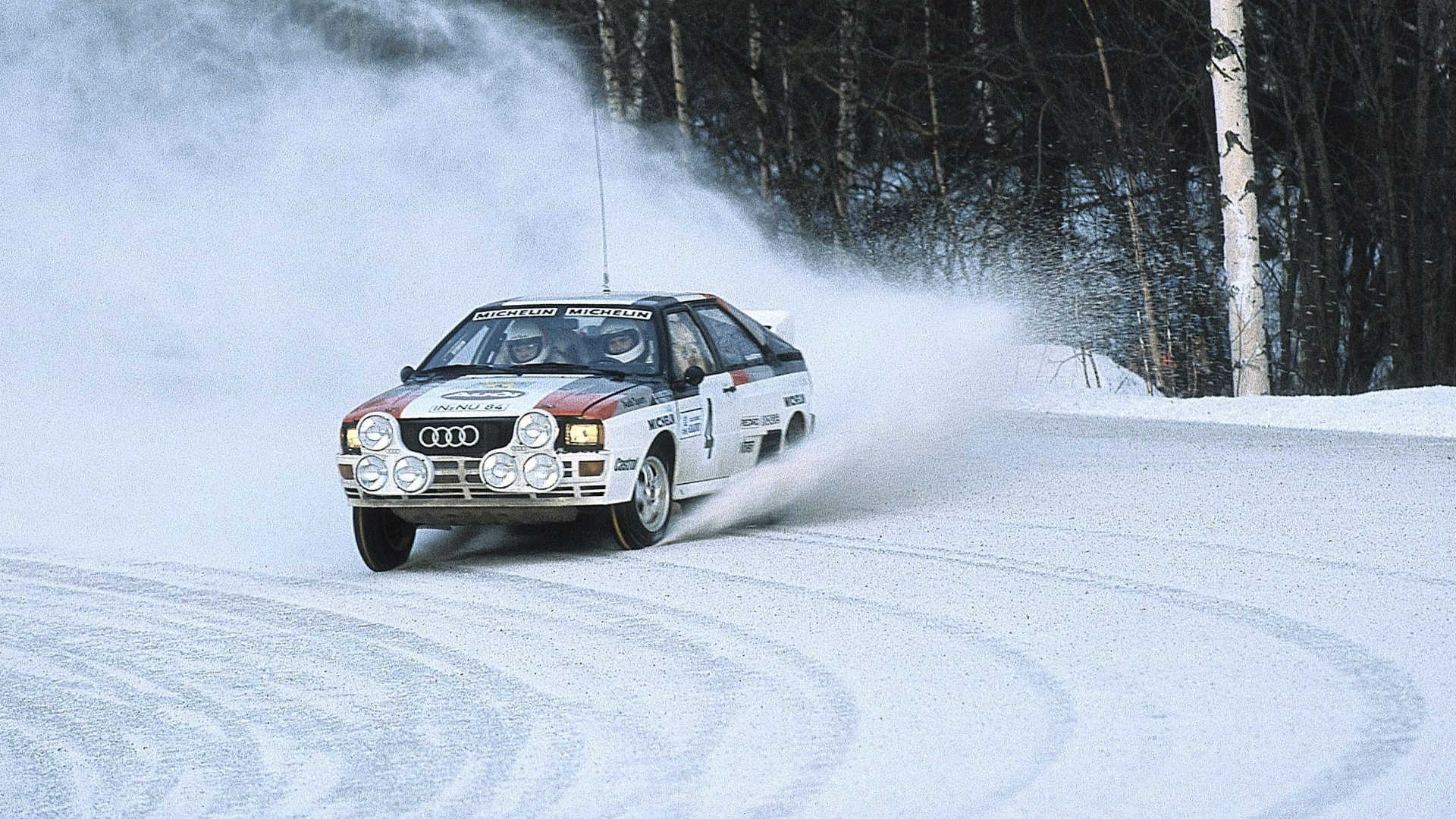 The first sign of Audi’s future domination of world rallying came at the 1980 Algarve Rally. The quattro appeared as a course car driven by Hannu Mikkola and unofficially finished the course almost half an hour earlier than the winner. In 1981, the Audi quattro won at its first attempt on the Austrian Rally, with Mikkola winning the first WRC event in Sweden. Also that year, Michele Mouton became the first woman to win a WRC race, with victory on the San Remo. 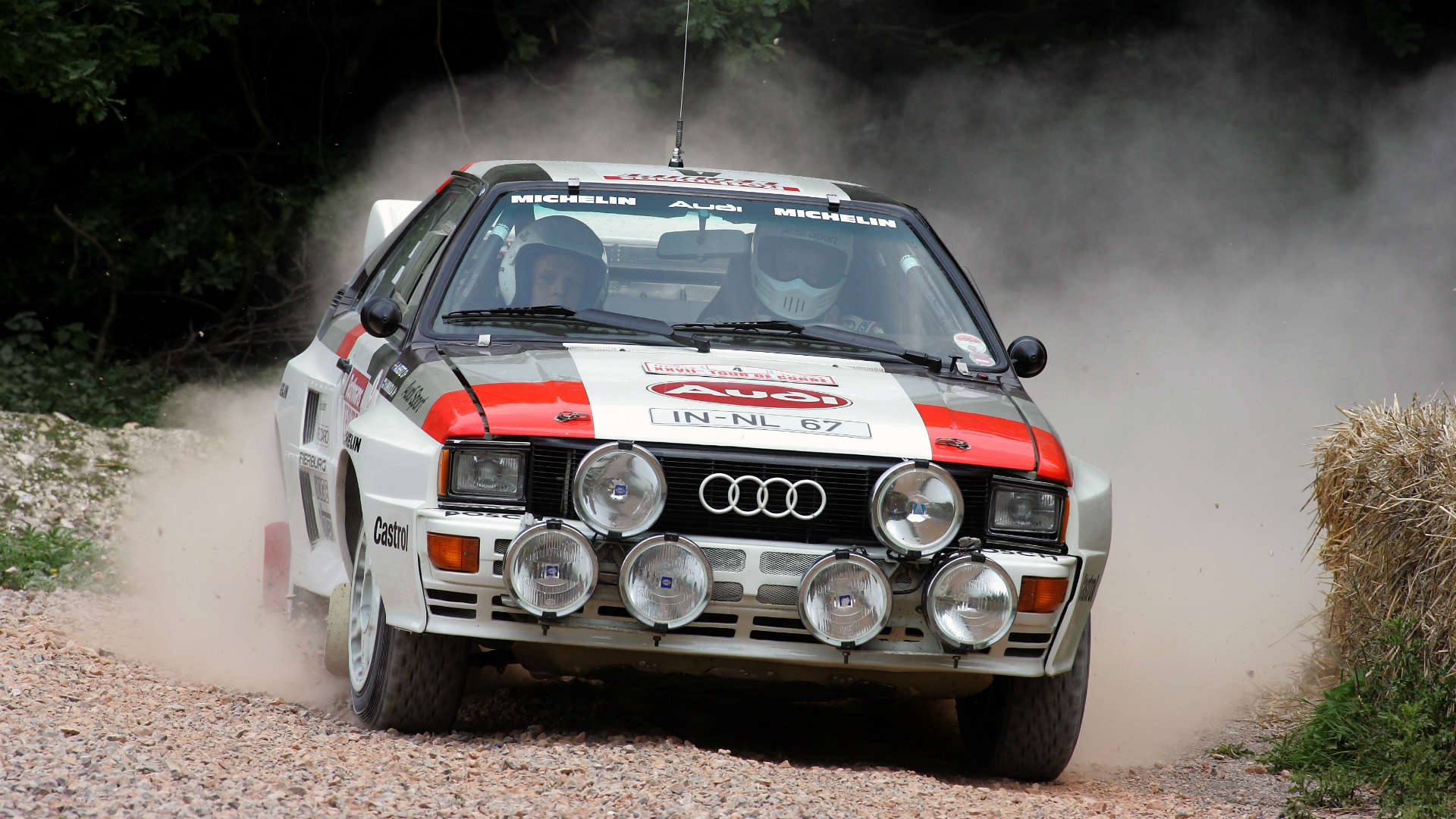 Things got even better in 1982, with Audi winning the WRC manufacturers’ title outright, with Walter Rohrl, Mouton and Mikkola completing a one-two-three. Mikkola won the drivers’ title in 1983, with Stig Blomqvist helping Audi to secure the manufacturers’ and drivers’ championships in 1984. The company also achieved a famous one-two-three in the Monte Carlo Rally. 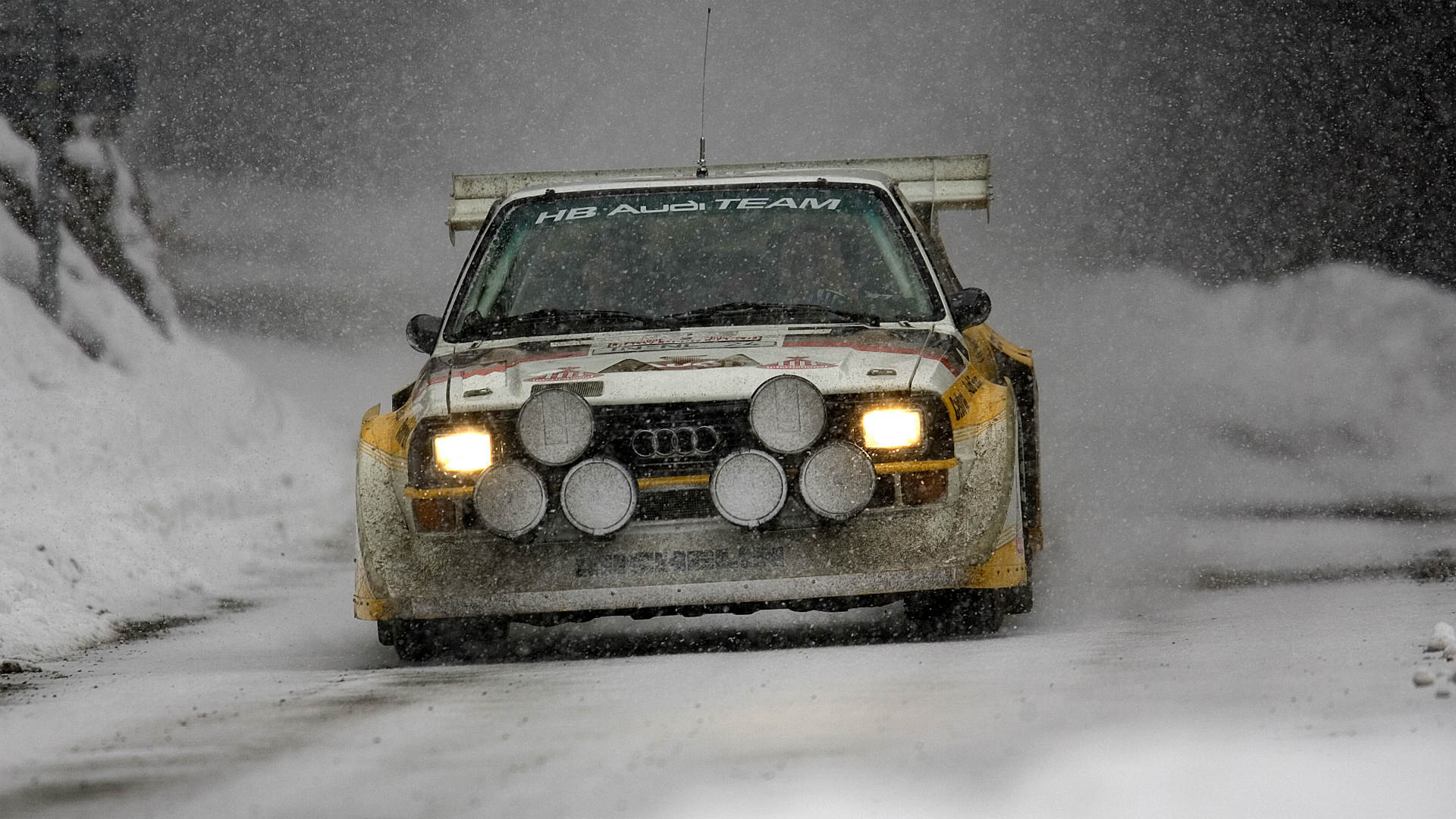 It wasn’t long before other manufacturers embraced the potential of four-wheel drive, which would chip away at Audi’s dominance. The introduction of Group B regulations made it easier for manufacturers to create purpose-built rally cars, which forced Audi to adapt the quattro. The result was the short-wheelbase Sport quattro S1, a car powered by a 20-valve engine developing more than 500hp. Although it took a couple of race wins, the Sport quattro S1 endured a largely unsuccessful career before Audi withdrew from Group B following the tragic events of the 1986 Portuguese Rally. 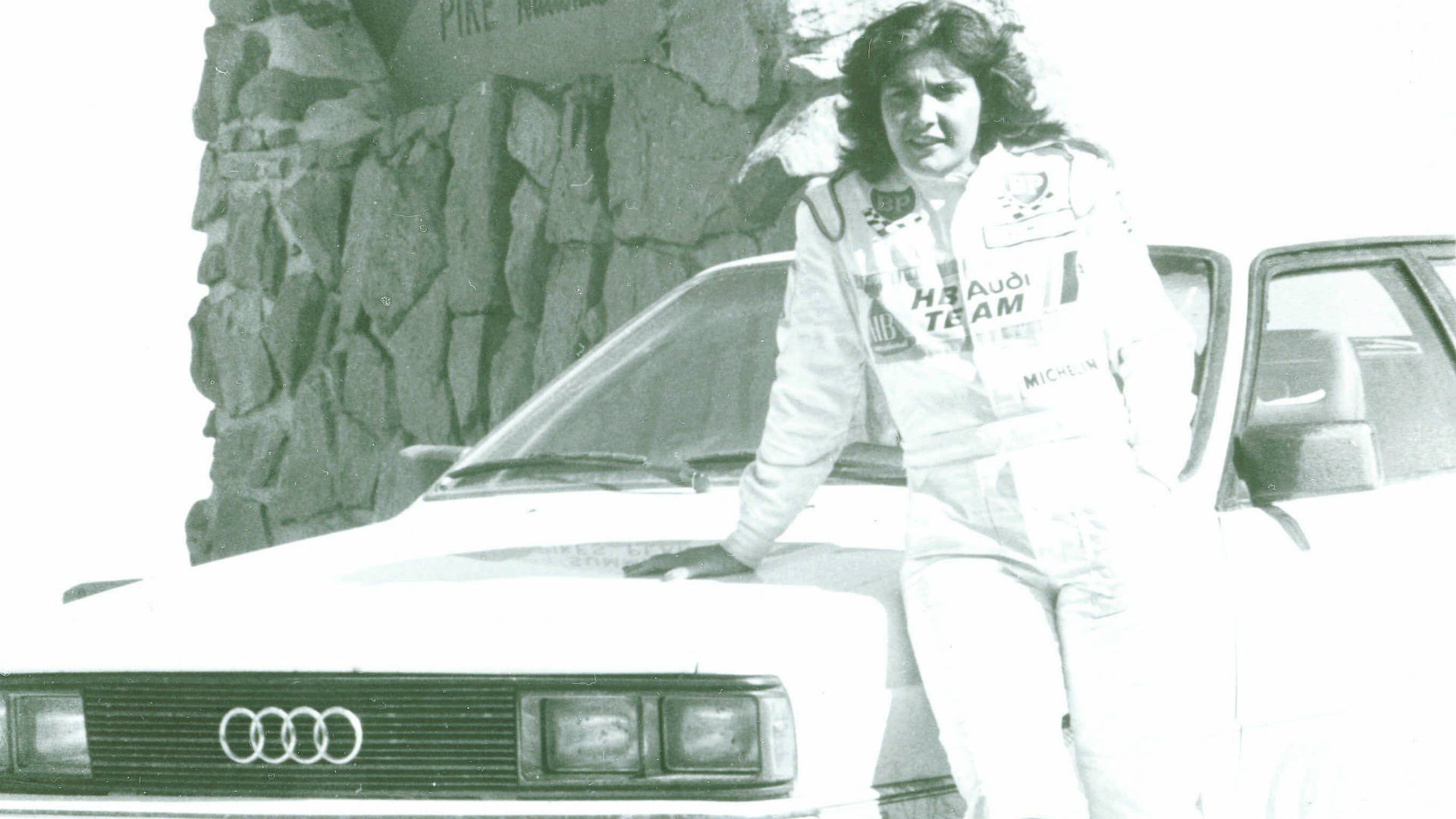 But that’s not before Audi showcased the effectiveness of the car at the Pikes Peak hillclimb in North America. First, Michele Mouton (pictured) won the event in 1985, before Walter Rohrl set a record time in 1987. Needless to say, the quattro’s success in motorsport had a positive effect on sales of the road-going versions. 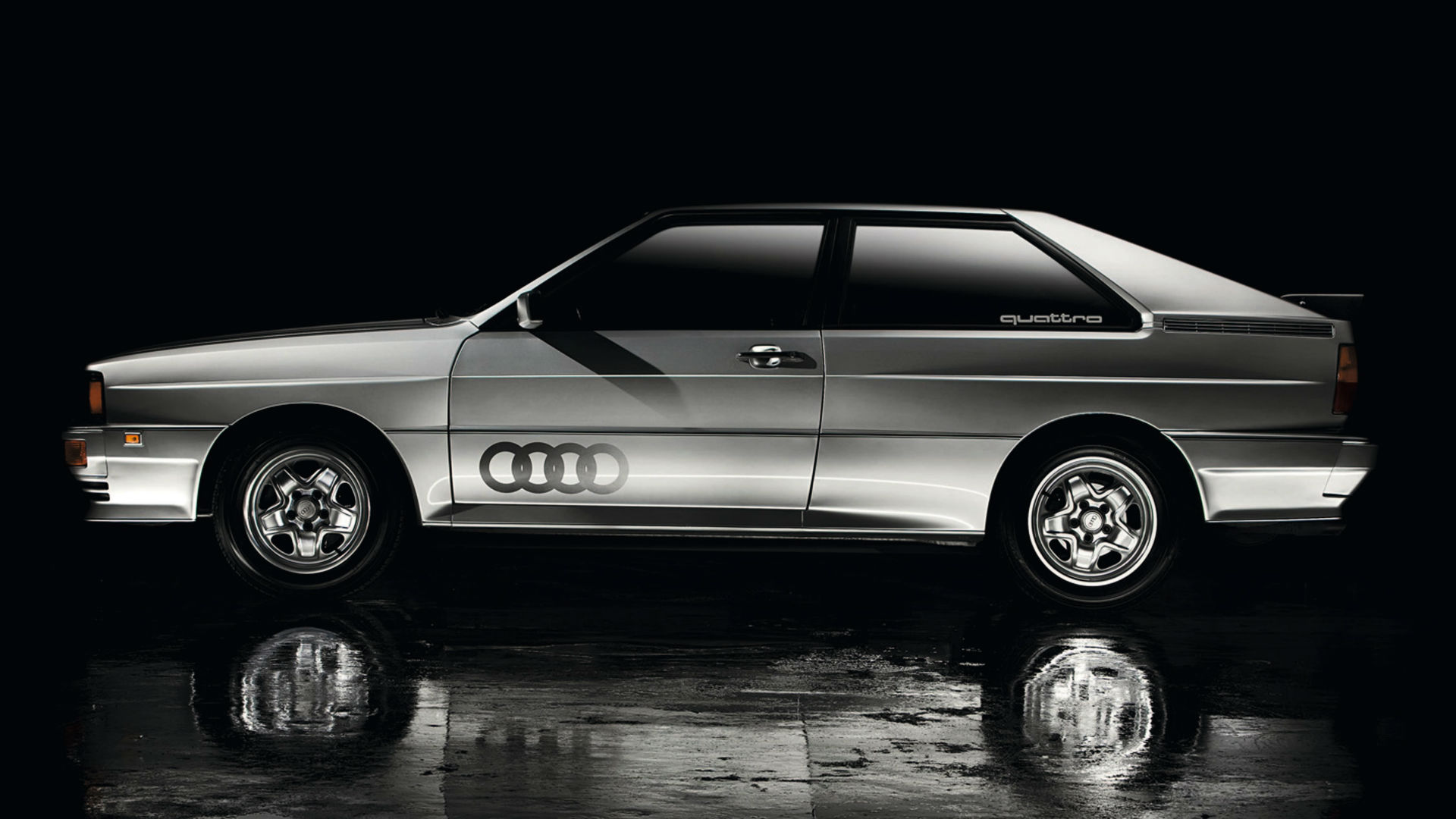 The first models arrived in the UK in March 1981, but the initial batch of quattros were all left-hand drive. In October 1982, Audi announced that it would be building right-hand-drive models for the UK market, although high prices meant that it remained out of reach to most buyers. The quad headlights disappeared for the 1983 model year, replaced by the less iconic but far more effective one-piece Cibie units. 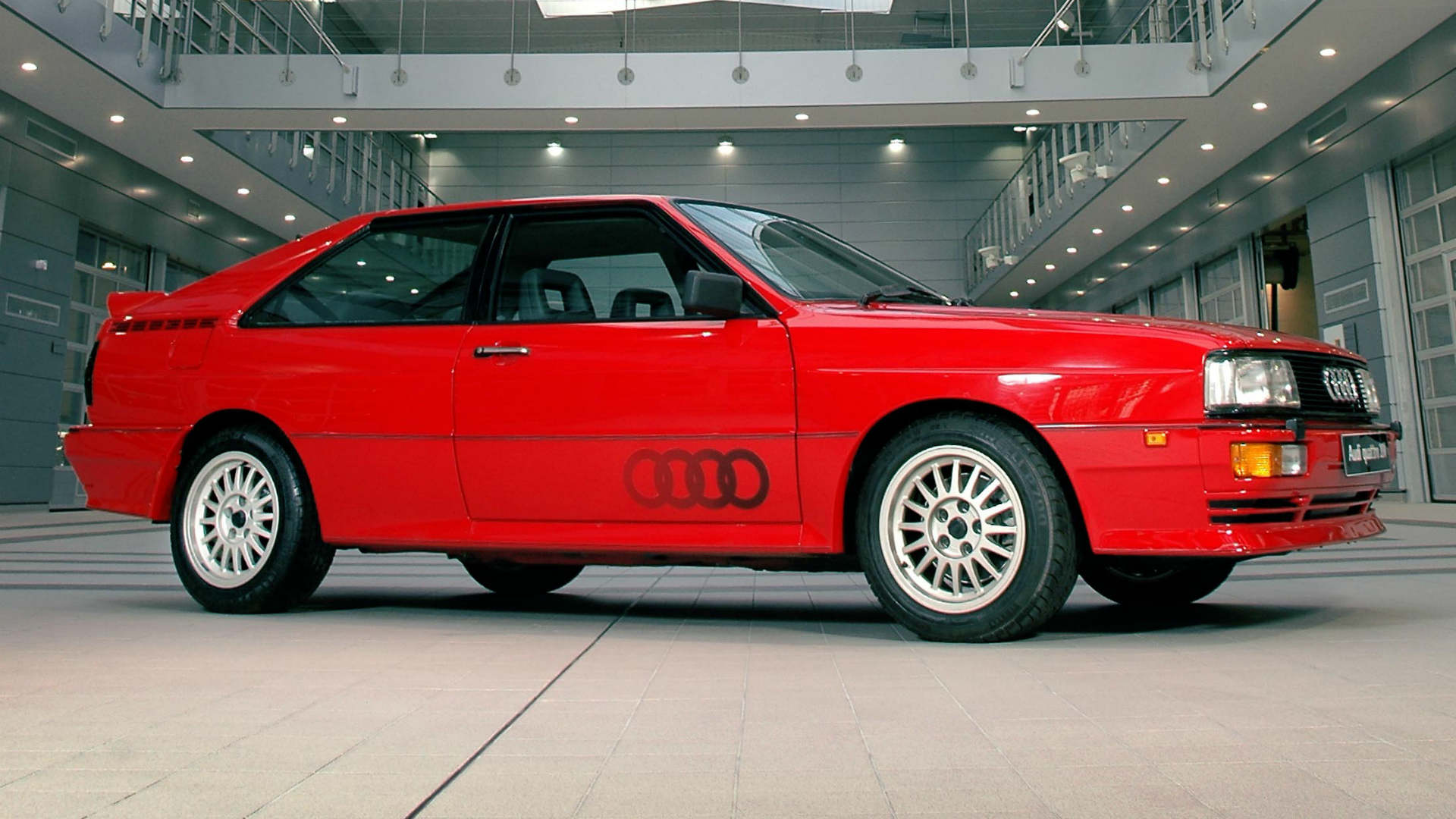 In 1989, Audi launched the quattro 20v, complete with an all-aluminum engine using a four-valves-per-cylinder head. It was the best road-going quattro to date, with the 20v version benefiting from Audi’s exploits with the Group B car. Crucially, the central diff was replaced by an automatically locking Torsen unit. According to Evo, it was the diff the car had been waiting for. Bensinger said: “Had we known about the Torsen differential then, it almost certainly would have been on the original quattro.” 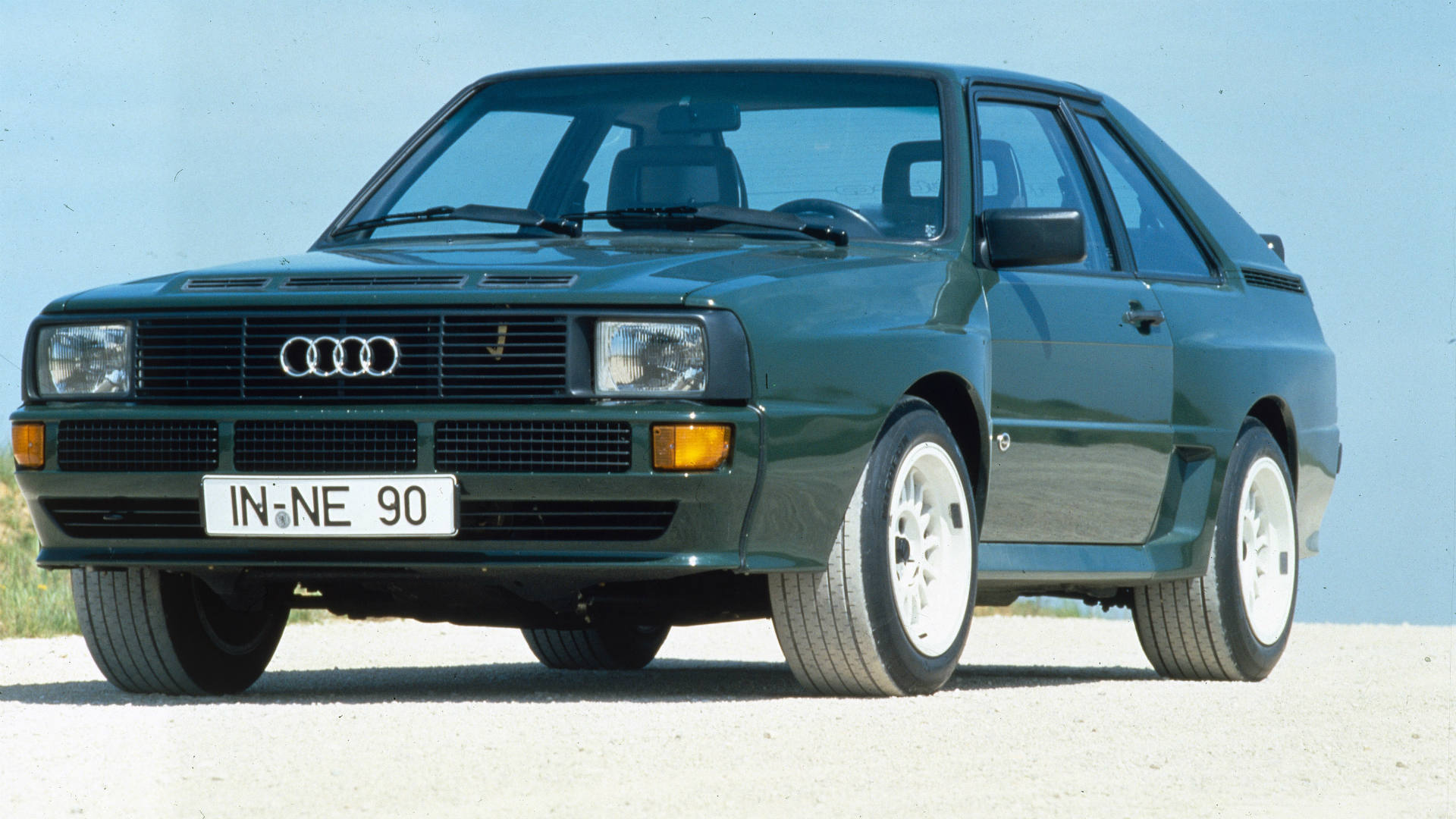 The other benefit of the S1 quattro was the creation of the road-going Audi Sport quattro. It was the most bonkers of the lot, with Audi building 224 to meet homologation rules. The shortening of the wheelbase gave it proper Group-B-for-the-road styling, and although the engine was downsized slightly, it could hit 60mph in 4.8 seconds and 100mph in 12.6 seconds. 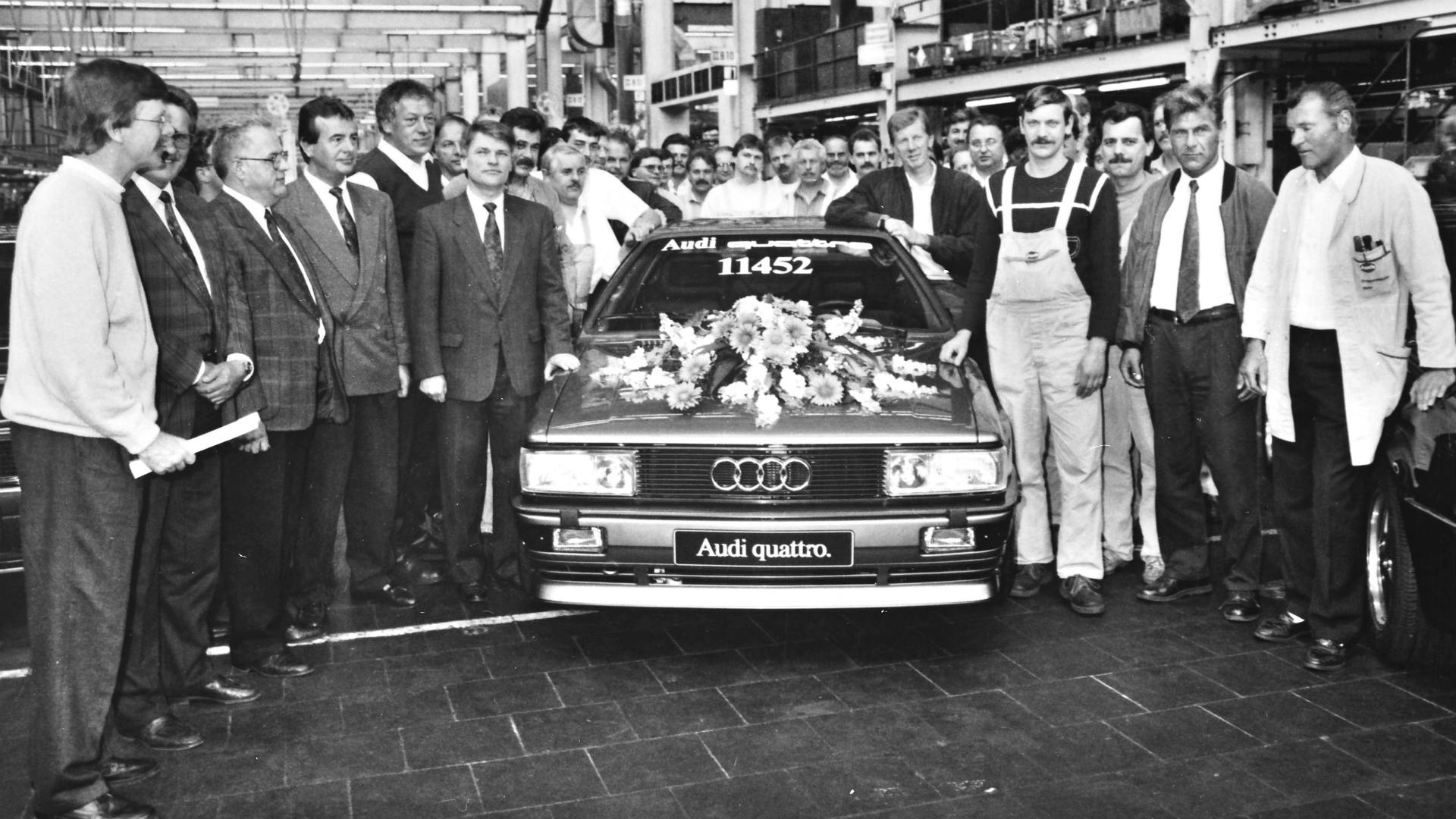 Although it was intended to be a low-volume model, quattro production lasted 11 years, with 11,452 cars built in the process. It left its mark on the world’s rally courses and the entire automotive industry. But what of its legacy? 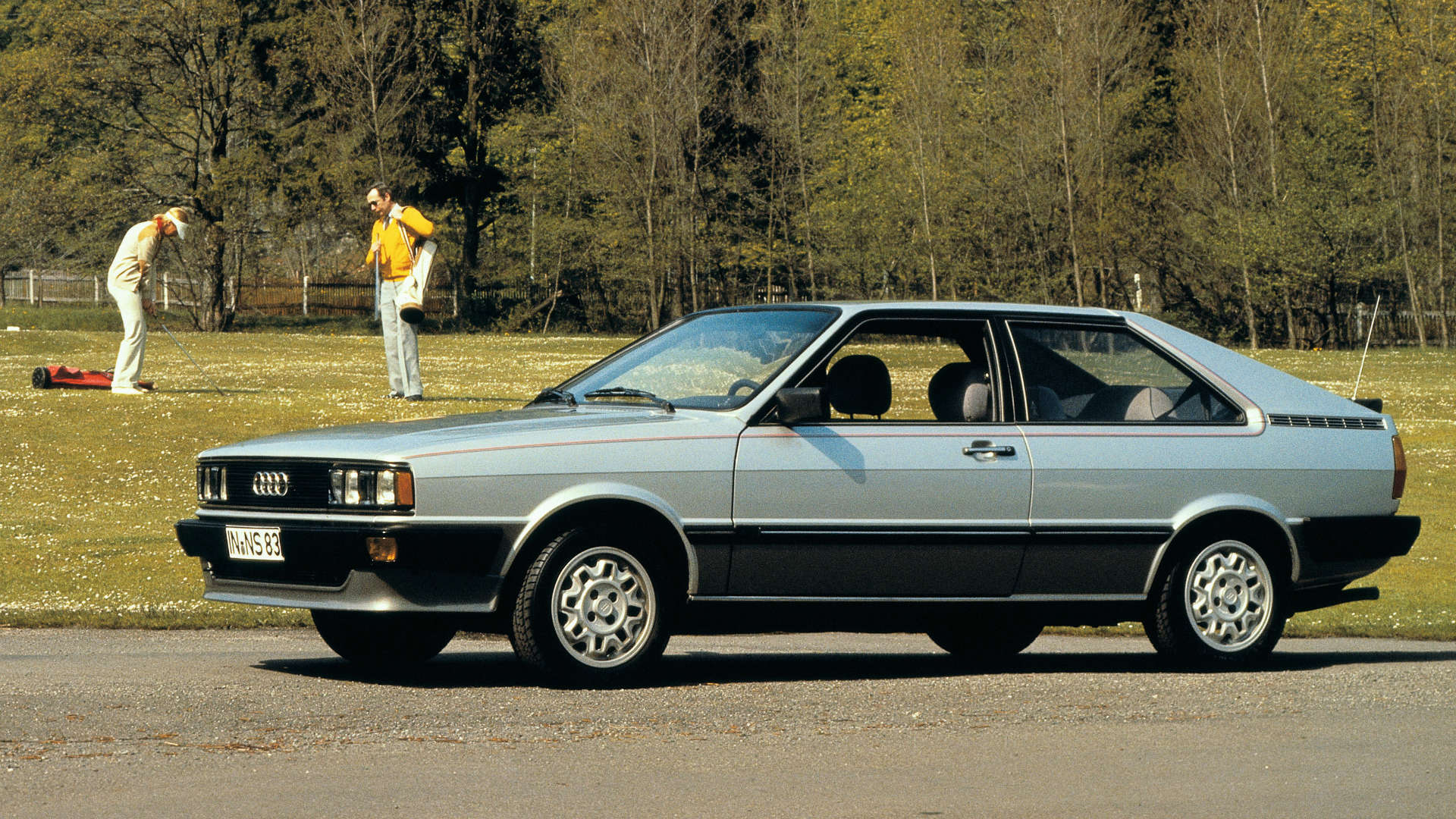 This is an interesting one. Although the Coupe GT is the car from which the Audi quattro was spawned, it actually arrived after the four-wheel-drive icon. It could be equipped with 4WD, but most left the factory with front-wheel-drive. Engines ranged from a 1.8-litre four-cylinder to a 2.3 five-cylinder, with enough space inside for four people and their luggage. It delivered the look of the full-fat quattro without the pedigree. 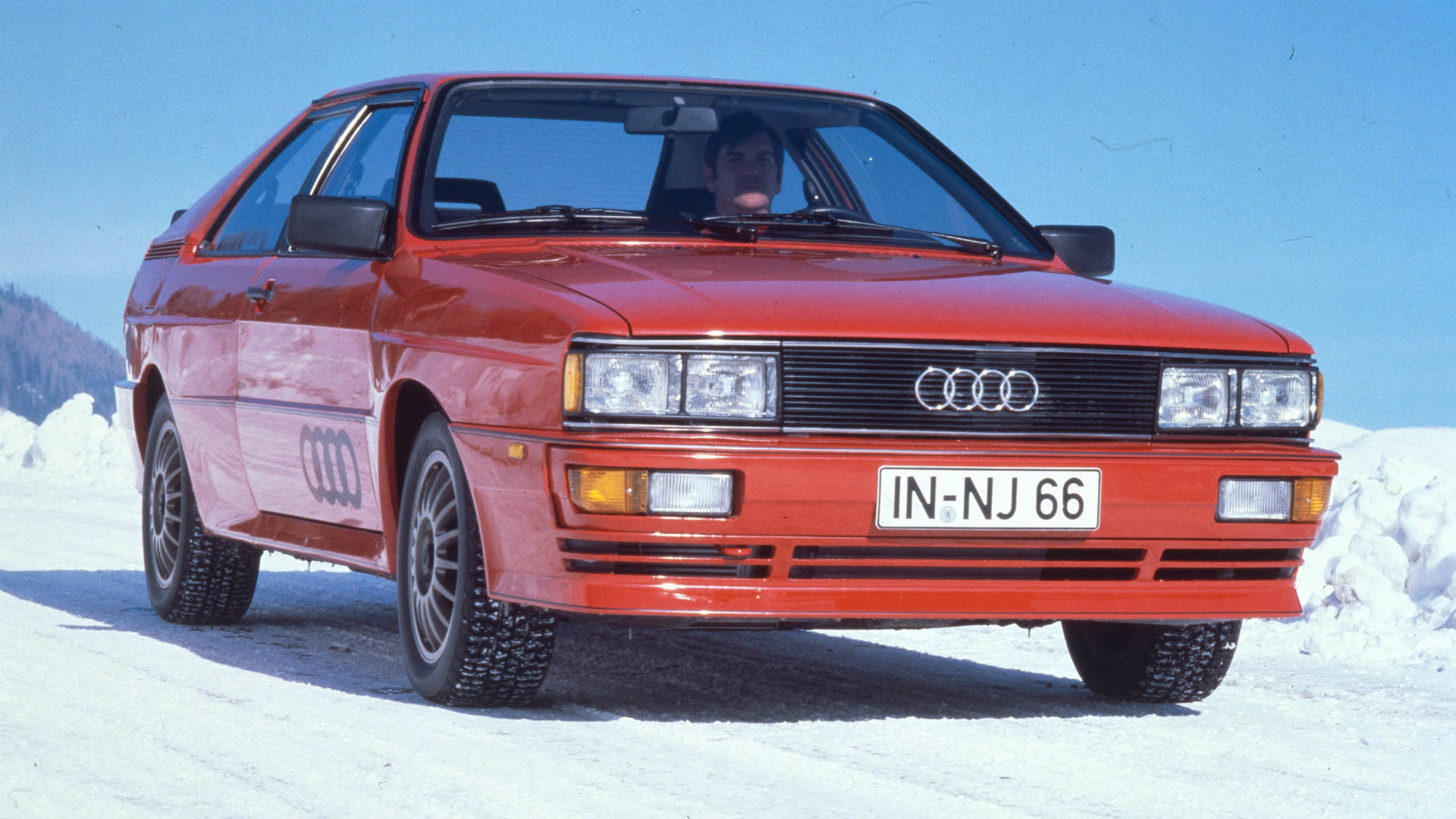 Audi has built an entire brand on the strength of four-wheel drive. In Germany, around 50 percent of all Audis sold come with four-wheel drive and the system is also incredibly popular in the UK. To think that it all started with a rather humble military-grade Volkswagen back in the 1970s. Now it’s time to turn our attention to the five cars that will be on display at The London Classic Car Show. 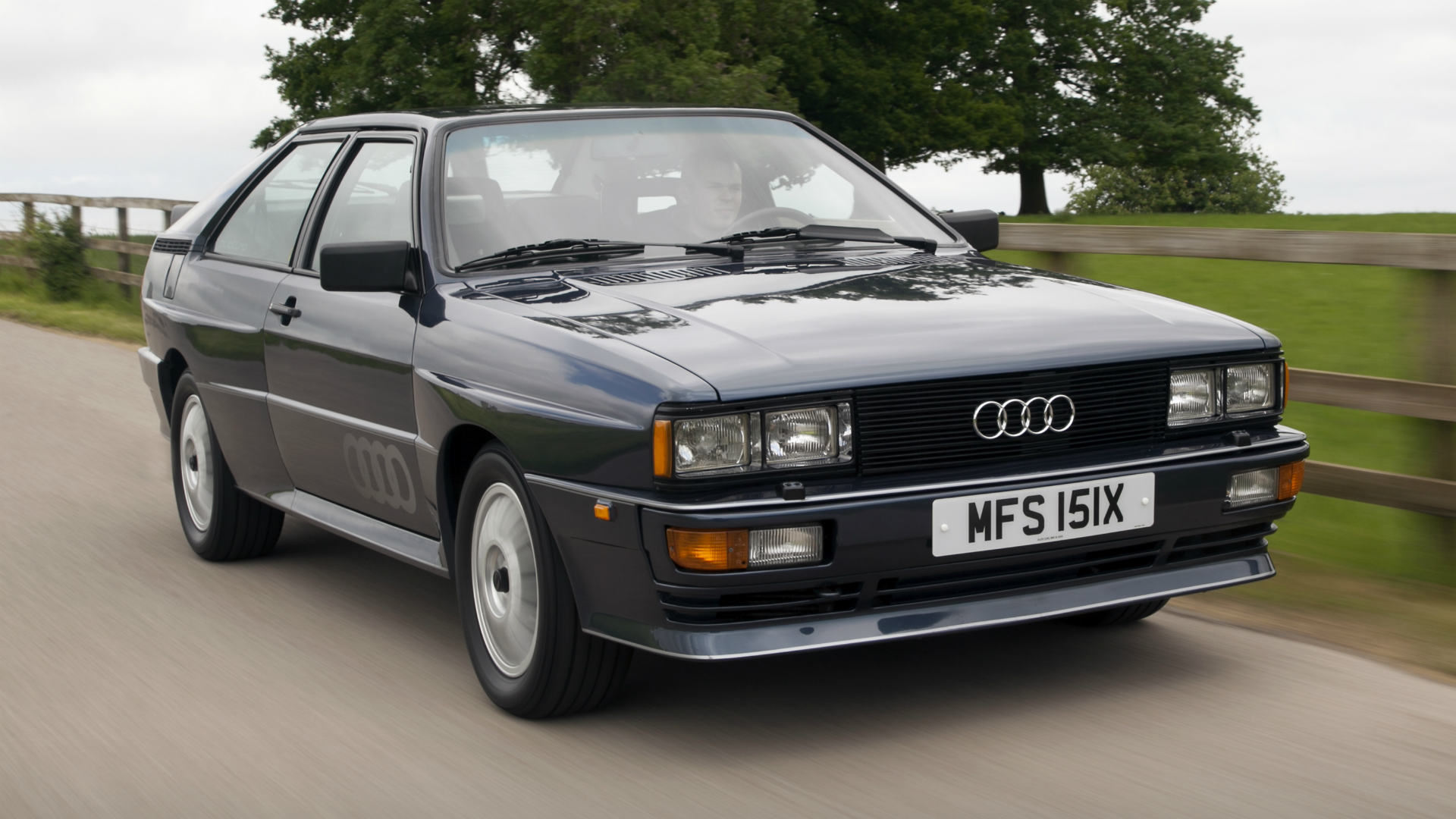 The cars on display are part of Audi UK’s heritage fleet. This is an early UK-specification model that was produced before right-hand-drive model development had been carried out. Alex Fisk, Audi UK digital PR manager, said: “Almost 40 years to the day since it was first seen by the public, we’ve chosen to celebrate the Audi quattro’s special milestone at The London Classic Car Show.” 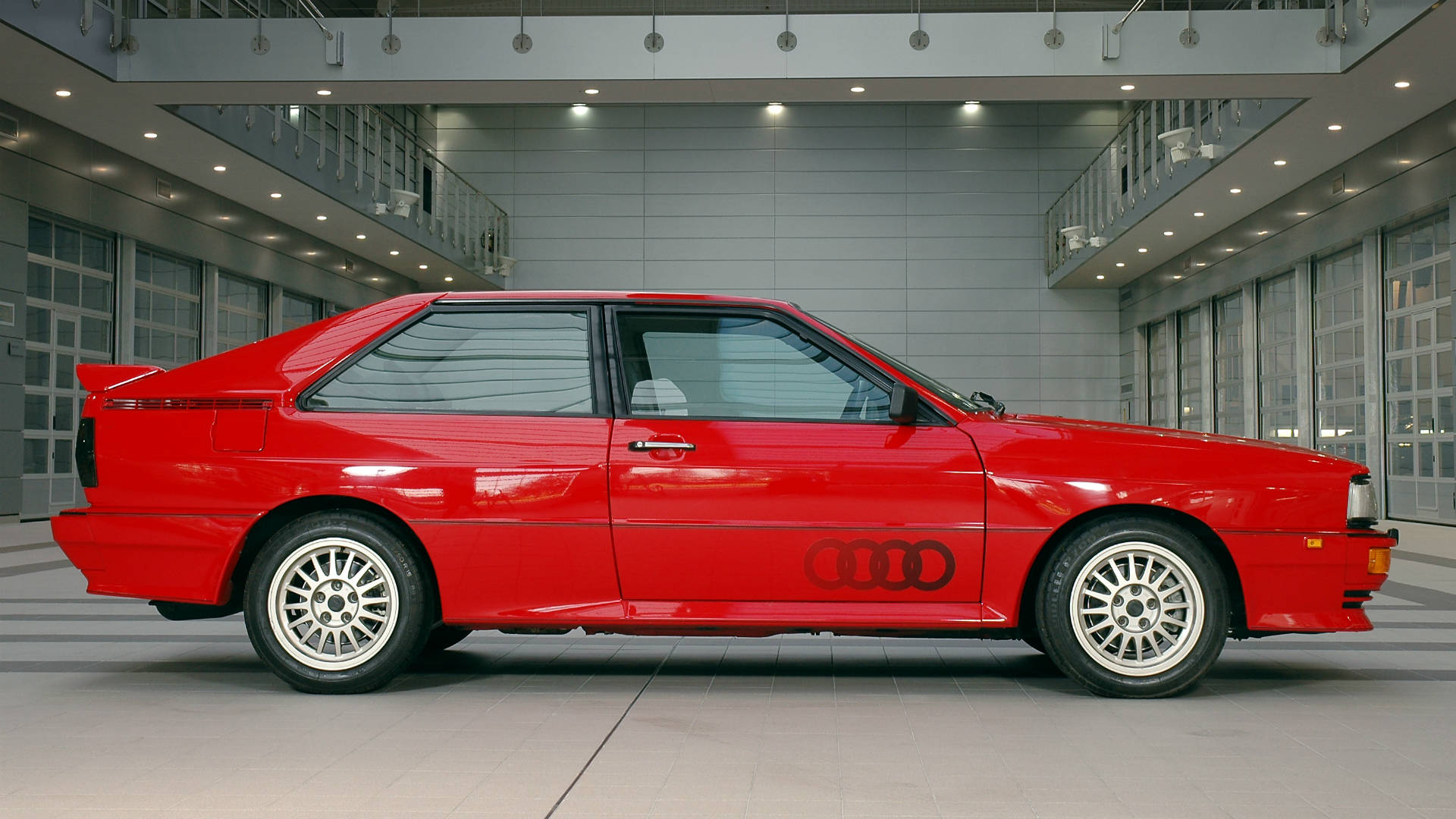 “Few cars are as iconic as the Audi quattro. Despite being produced in relatively low volumes, it had a huge impact on the automotive market and has left an even bigger impression on car aficionados,” said Bas Bungish, London Classic Car Show event director. This 1991 20v has been retained by Audi UK from new and remains unregistered. 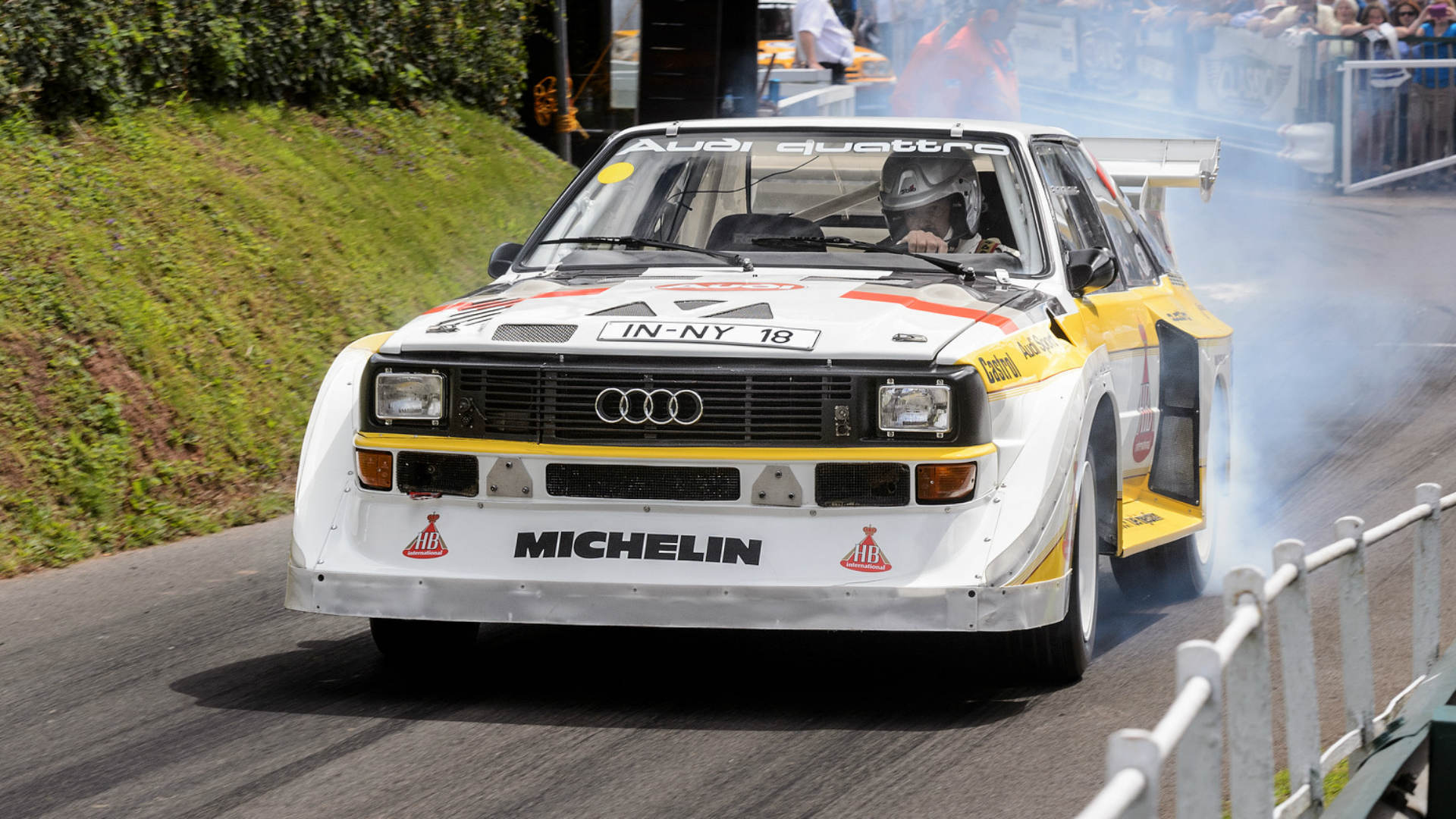 This Audi S1 E2 represents the quattro in competition. The Sport quattro was driven by Stig Blomqvist in the 1985 Rally of the 1000 Lakes in Finland, and then to victory by German driver Walter Rohrl in the Semperit Rallye later that season. After an accident at the RAC Rally, it was rebuilt as a test car for the experimental PDK double-clutch transmission. 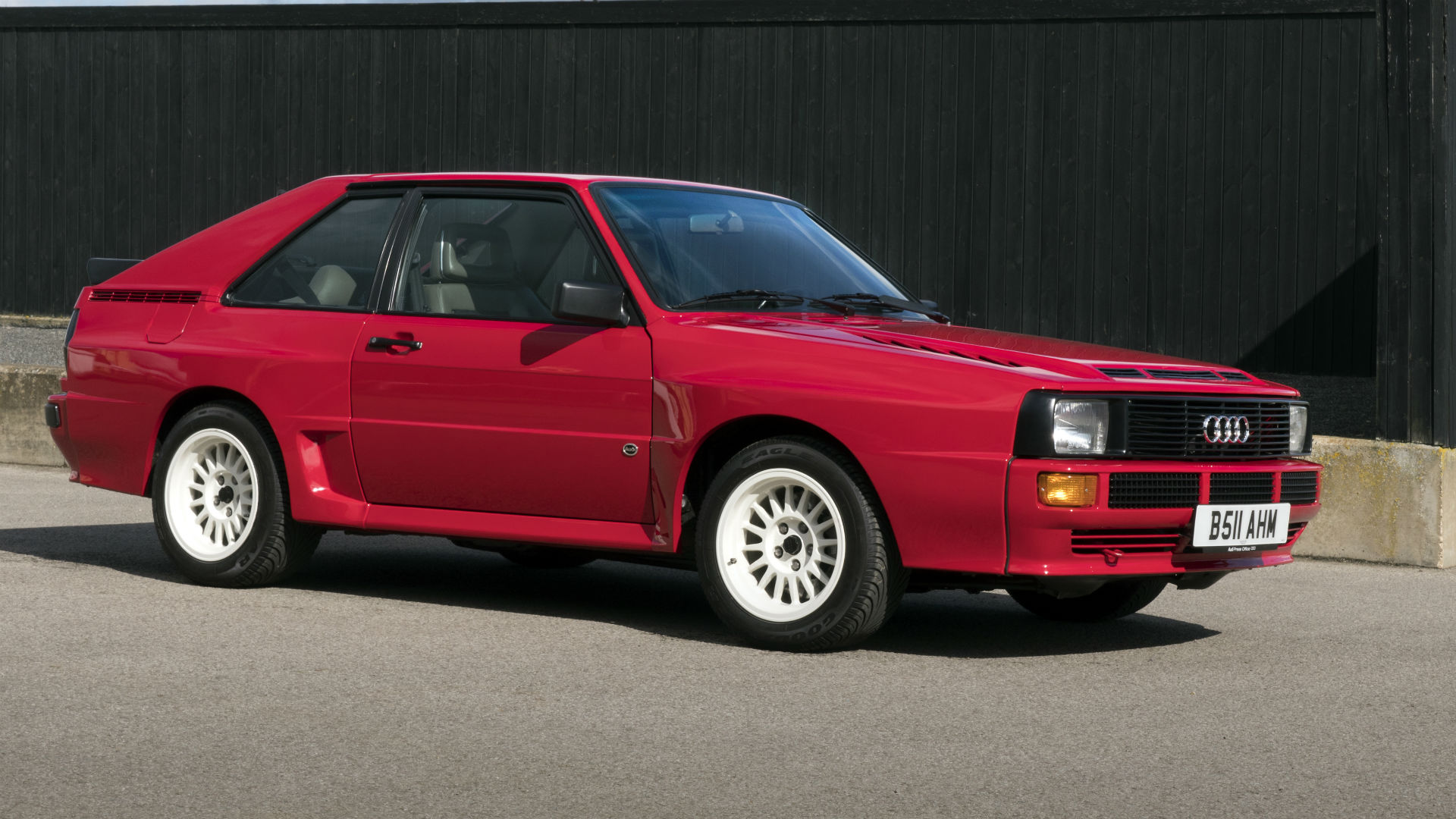 This 1985 Audi Sport quattro was purchased from Audi AG in Germany as a demonstrator in 1985 and is one of 224 built. It was cosmetically restored a decade ago and has recently undergone a mechanical refresh. 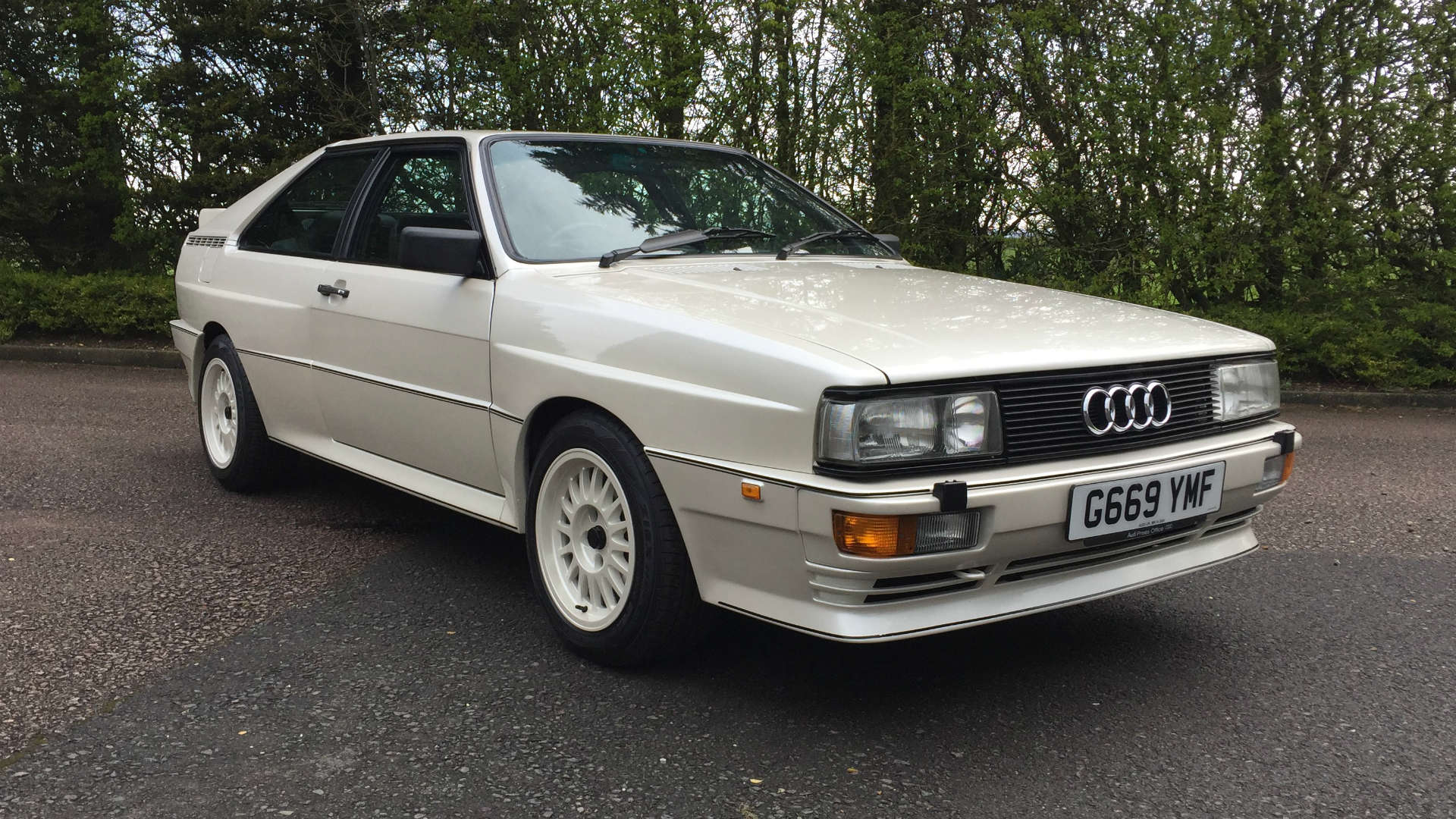 Finally, this 1990 Audi quattro 20v was acquired by Audi UK in the early 2000s and is used for media driving and display purposes. It’s said to be one of the heritage fleet’s hardest working cars.

Fire up the quattro! 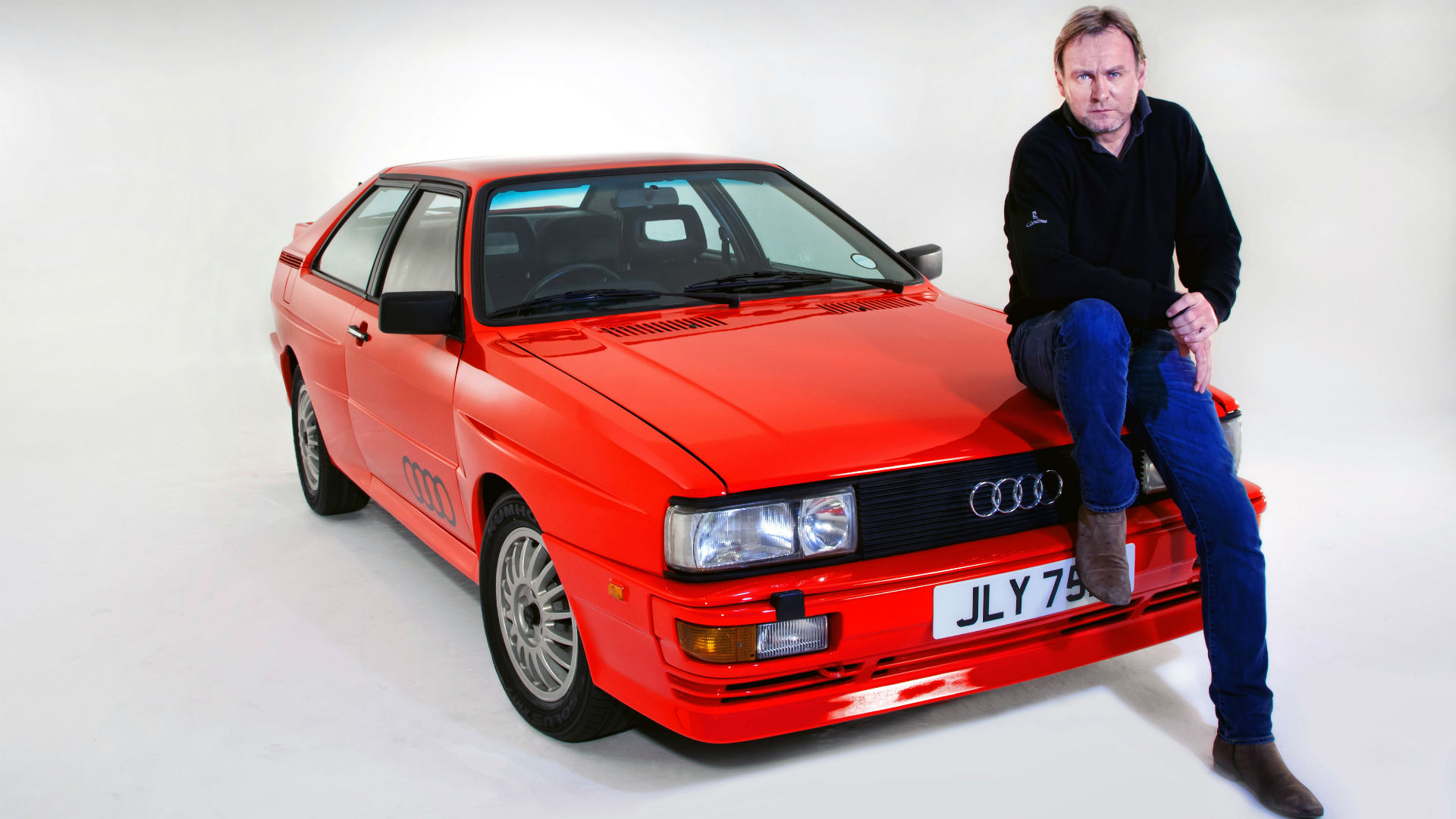 We’ll end this very brief history of the Audi quattro with one of the car’s most famous helmsman outside the world of motorsport. If you’re fired up by the quattro, The London Classic Car Show will take place on 20-23 February 2023 at Olympia London. Tickets cost £25 for adults, £20 for children and £75 for a family of four.

40 years of Audi Quattro: in pictures