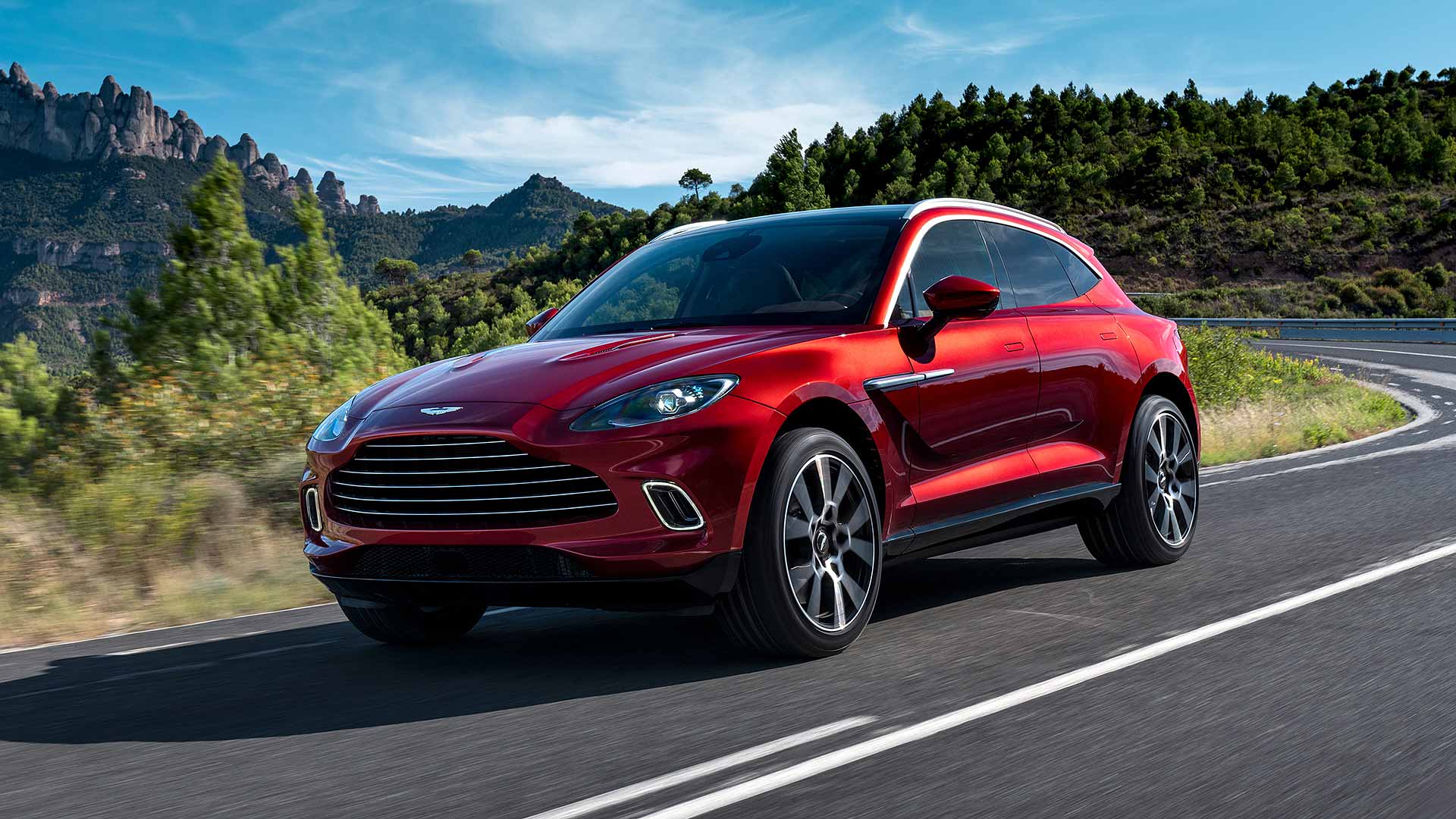 The Aston Martin DBX SUV could be the most important car the British sports car firm will ever launch. The company’s future rests on the success of this, its first ever SUV. Fortunately, first impressions from the launch event in Los Angeles are strong. Aston Martin appears to have hit the bullseye with the 2020 DBX. 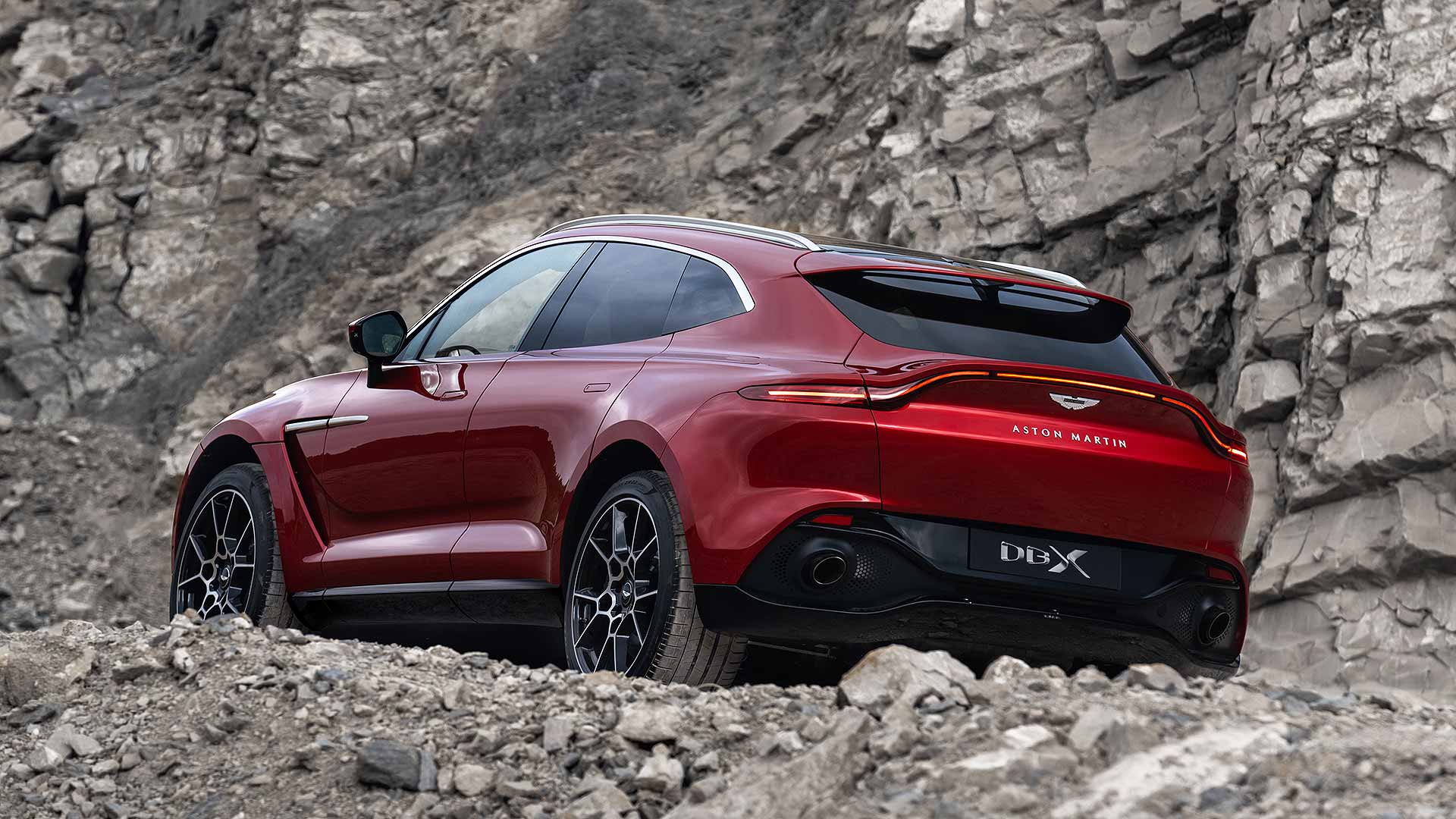 Striking, stylish and suitably sporty, the DBX is a standout SUV that eschews boxy blockiness for a more elegant and exotic profile. Can SUVs be beautiful? This lays a greater claim to it than most – and no, says the design team proudly, the obvious references to Aston sports cars like the Vantage are no coincidence… 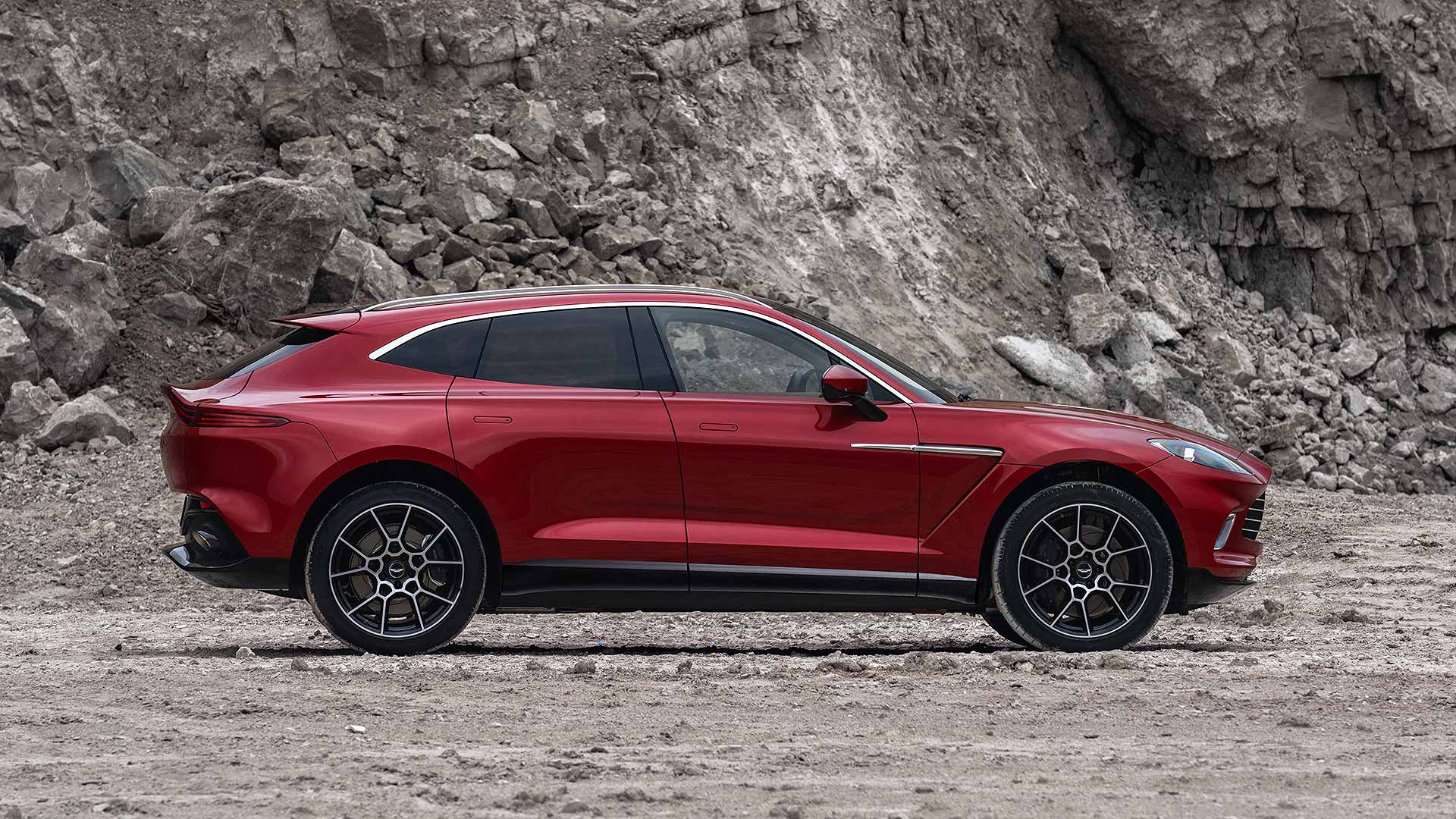 Aston Martin has intentionally aimed for elegance with the DBX, rather than in-your-face brashness. The silhouette is described as fastback-like, with the visual mass over the rear wheels, like in a sports car. Yet a very long wheelbase means it’s easy to get into, both front and rear. It can’t simply look pretty: it has to tick all the SUV practicality boxes, too. 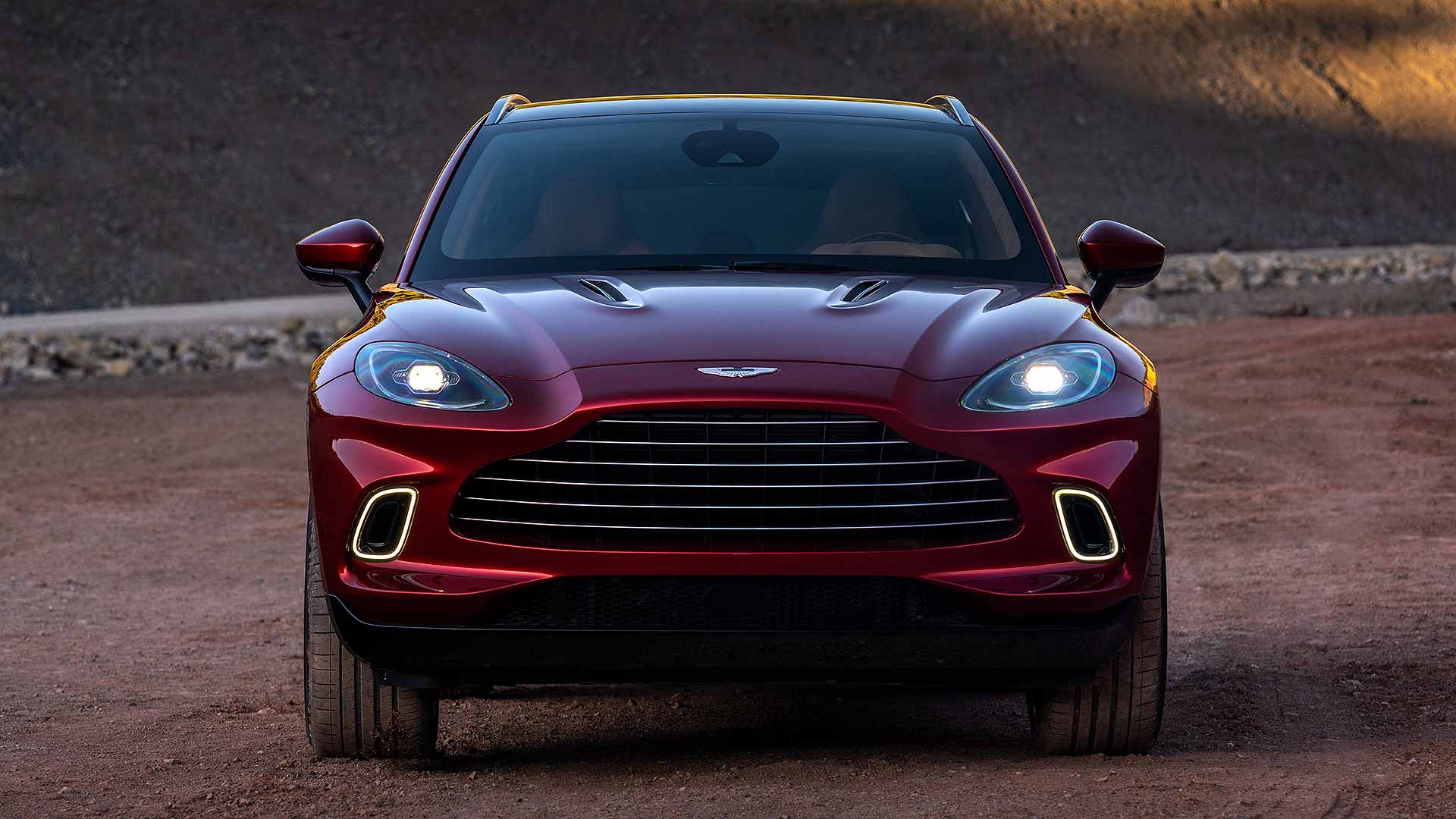 Of course, at the front, there’s the Aston Martin grille, and bonnet blades that can be finished in satin chrome, carbon fibre and other materials. The designers are proud of the new daytime running lights, which double up as indicators, and also have a built-in aerodynamic duct. 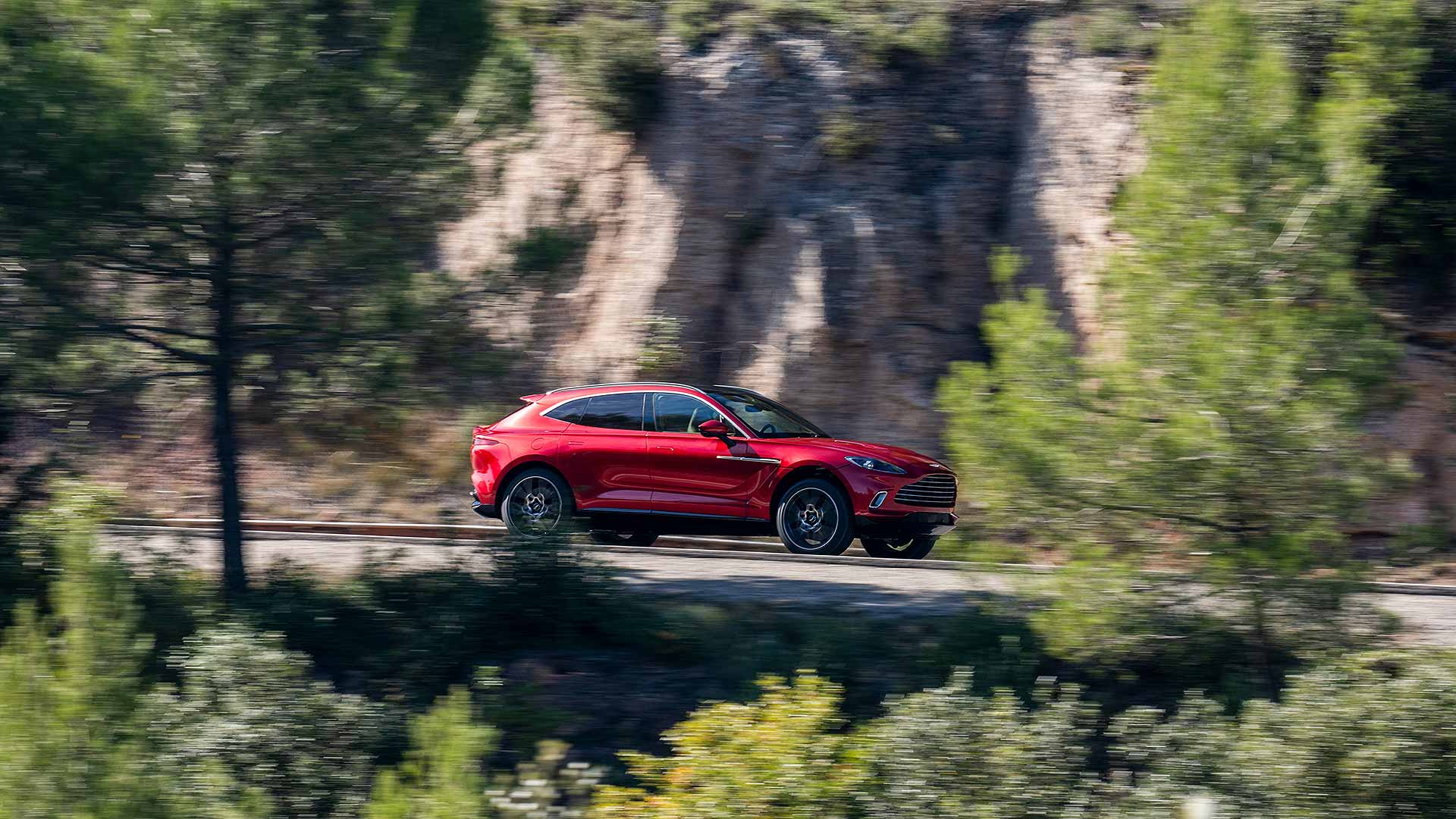 At the side, “the sculpted nature… contrasts with the flat, slab-like forms often seen on SUVs,” says Aston, in a not-so-subtle nod to some of its boxier rivals. It even has a beefy set of rear haunches, plus a set of dual exhausts. 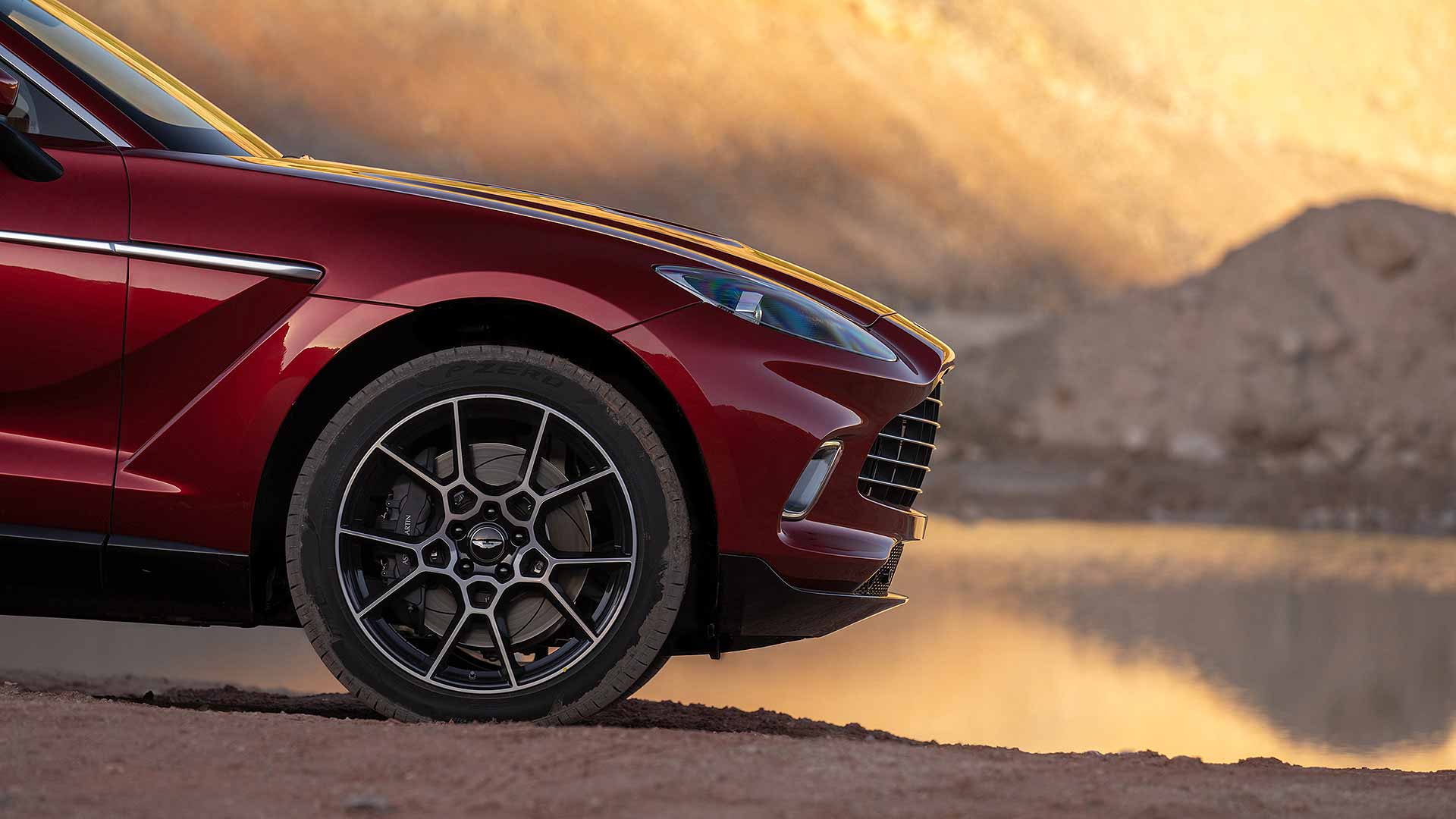 22-inch alloys are standard, and Aston has even carefully considered the space between the tyre and wheelarch. It’s bigger than a sports car, and “this intentional injection of space imbues the whole car with a readiness and an uplifting demeanour that reflects the lightness in the way it drives whether on or off road”. 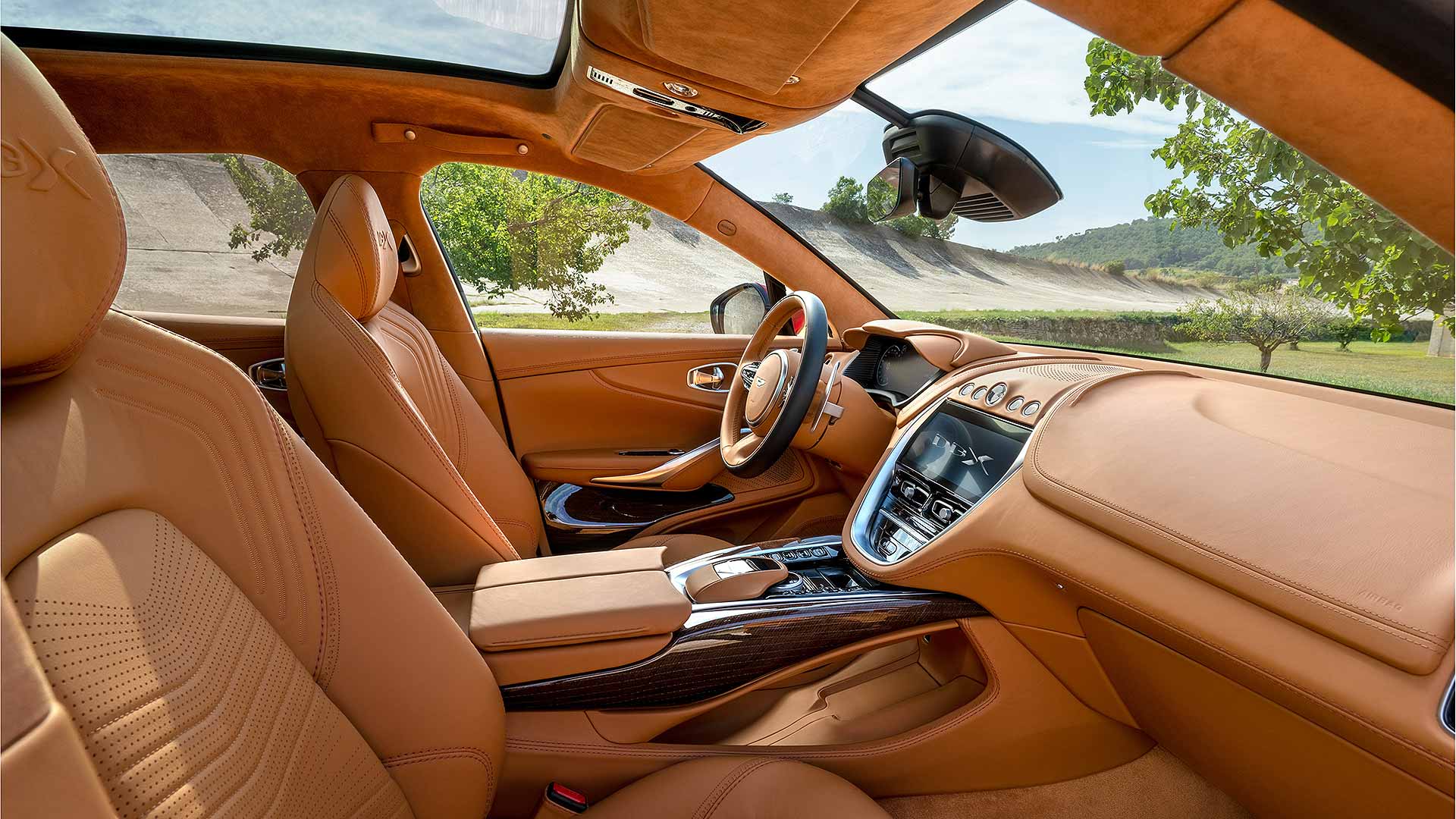 The interior is similarly appealing. Incredibly rich and luxurious, it’s also clean, contemporary and unlike any other Aston. The quality of the materials is of the very highest order, we’re told – and the amount of customisation for colours, trims and materials is vast. 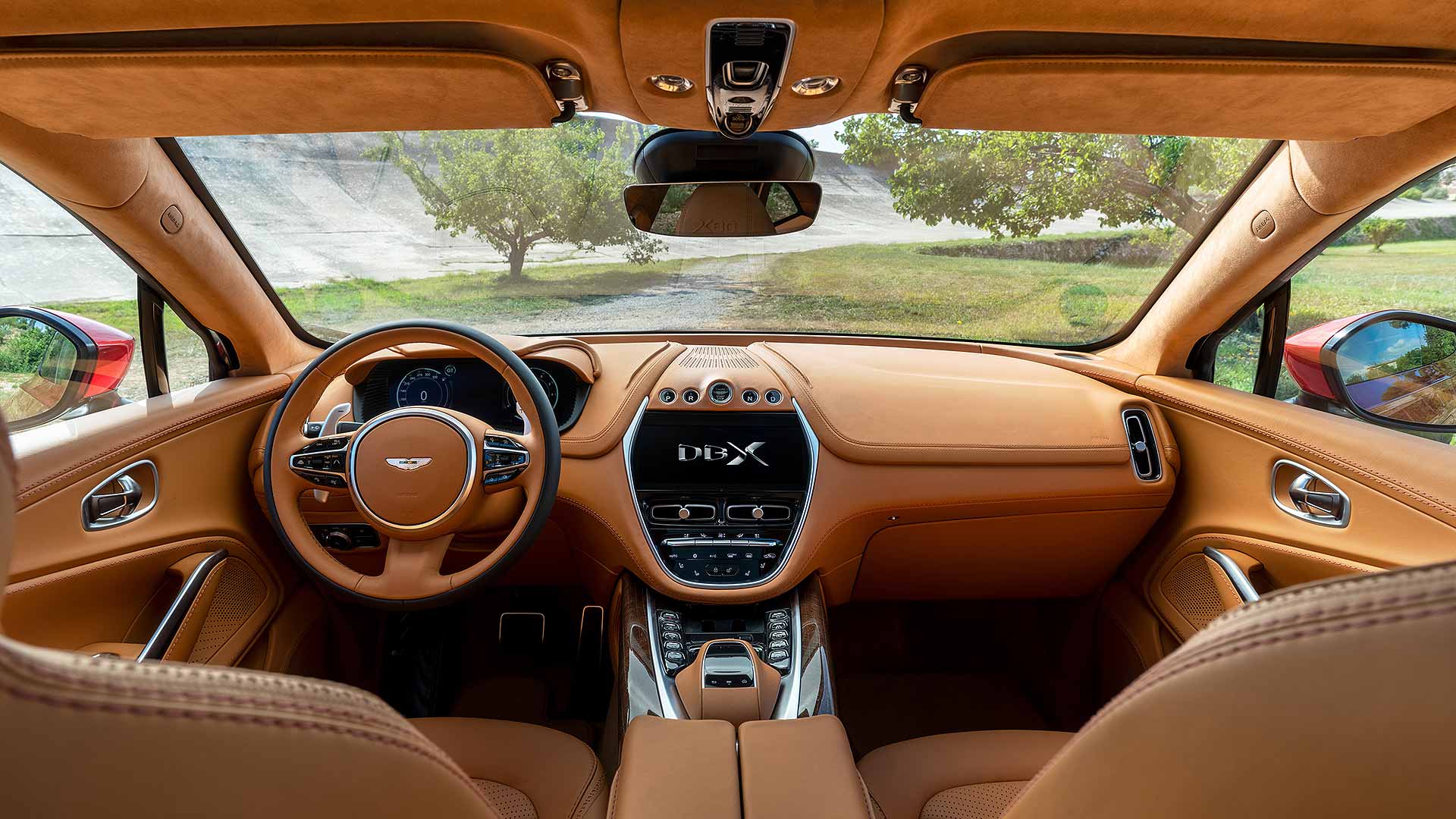 The interior has been loaded up with technology. A 10.25-inch TFT screen is in the centre of the dash, with a 12.3-inch screen for the driver (Aston says the graphics and layout has been inspired by its classic sports cars). Apple CarPlay is standard, and all infotainment technology is sourced from tech partner Daimler. 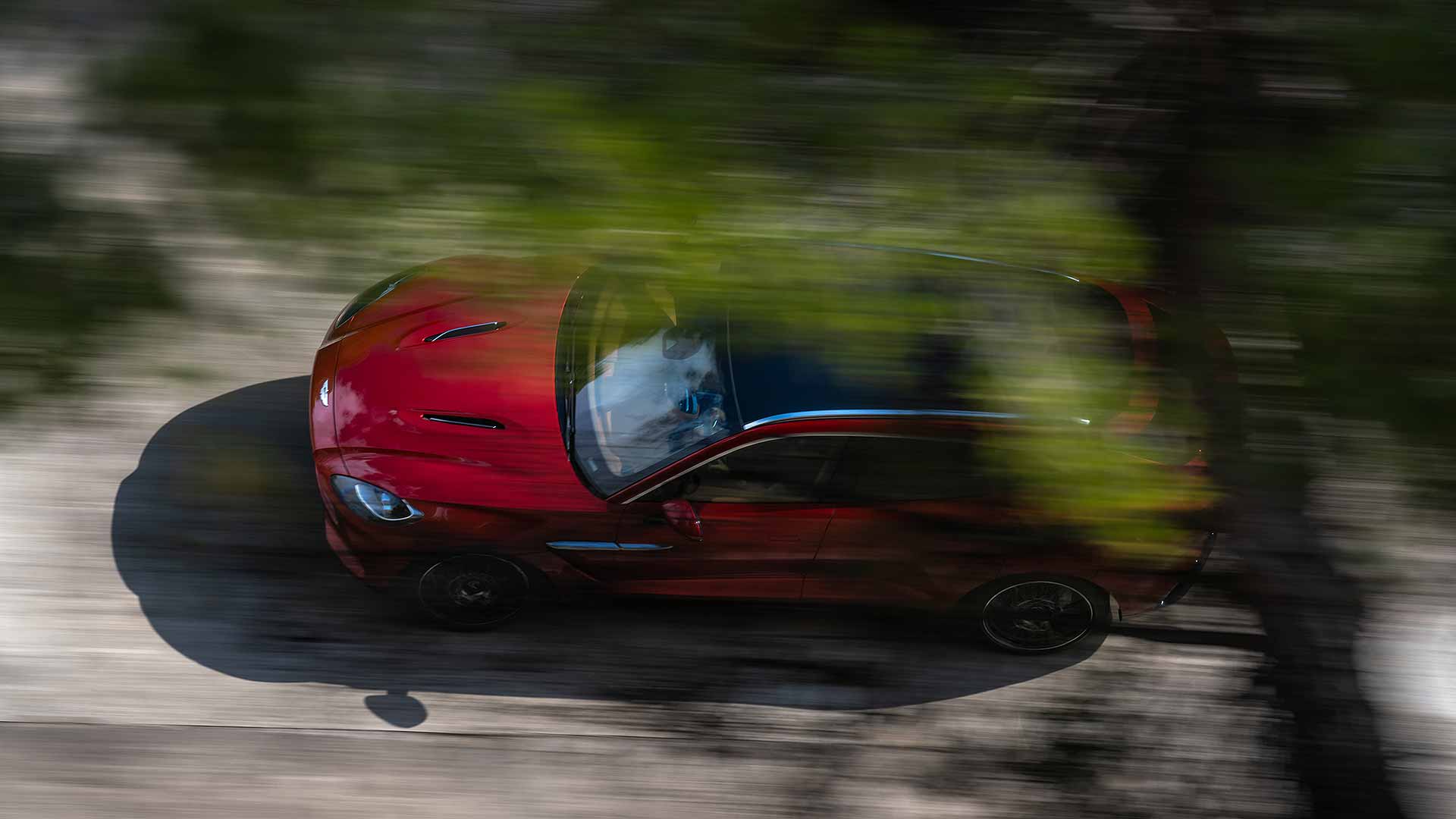 The launch engine is a 4.0-litre V8 twin-turbo, also used on the DB11 and Vantage. It produces 550 horsepower, taking this 2,245 kg (4,940 lb) five-seat SUV from 0-62 mph in 4.5 seconds, then onto 181 mph. Even faster versions will undoubtedly follow. All will likely use the launch nine-speed automatic gearbox. 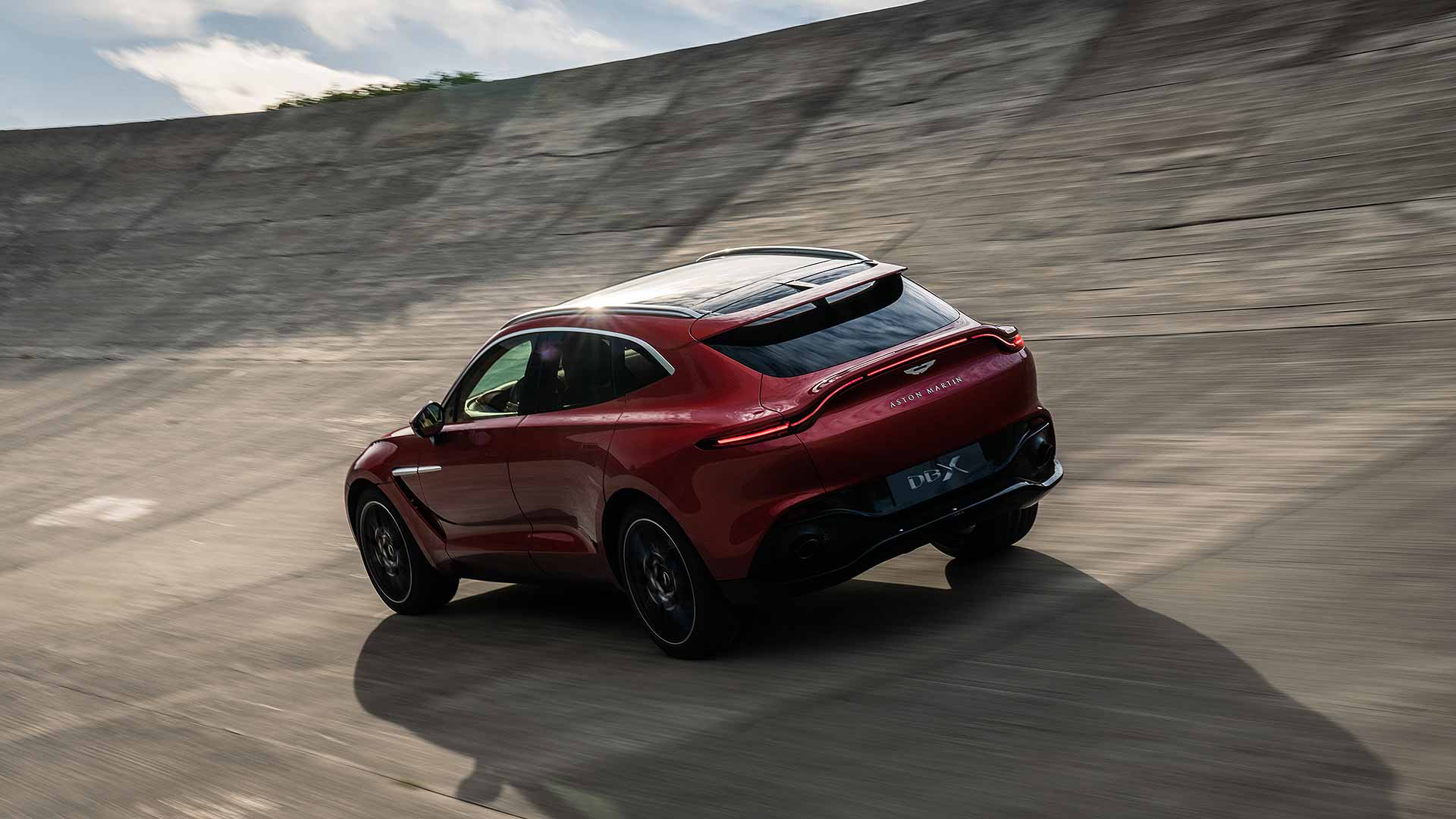 It’s not the same engine as the Vantage and DB11, though. Aston Martin has actually changed the firing order of the cylinders, to alter the noise of the engine. An active exhaust enhances it, and also delivers a fruity start-up blast (if the owner wants a more discreet getaway, they can hold down the starter button to keep the active exhaust valves closed). 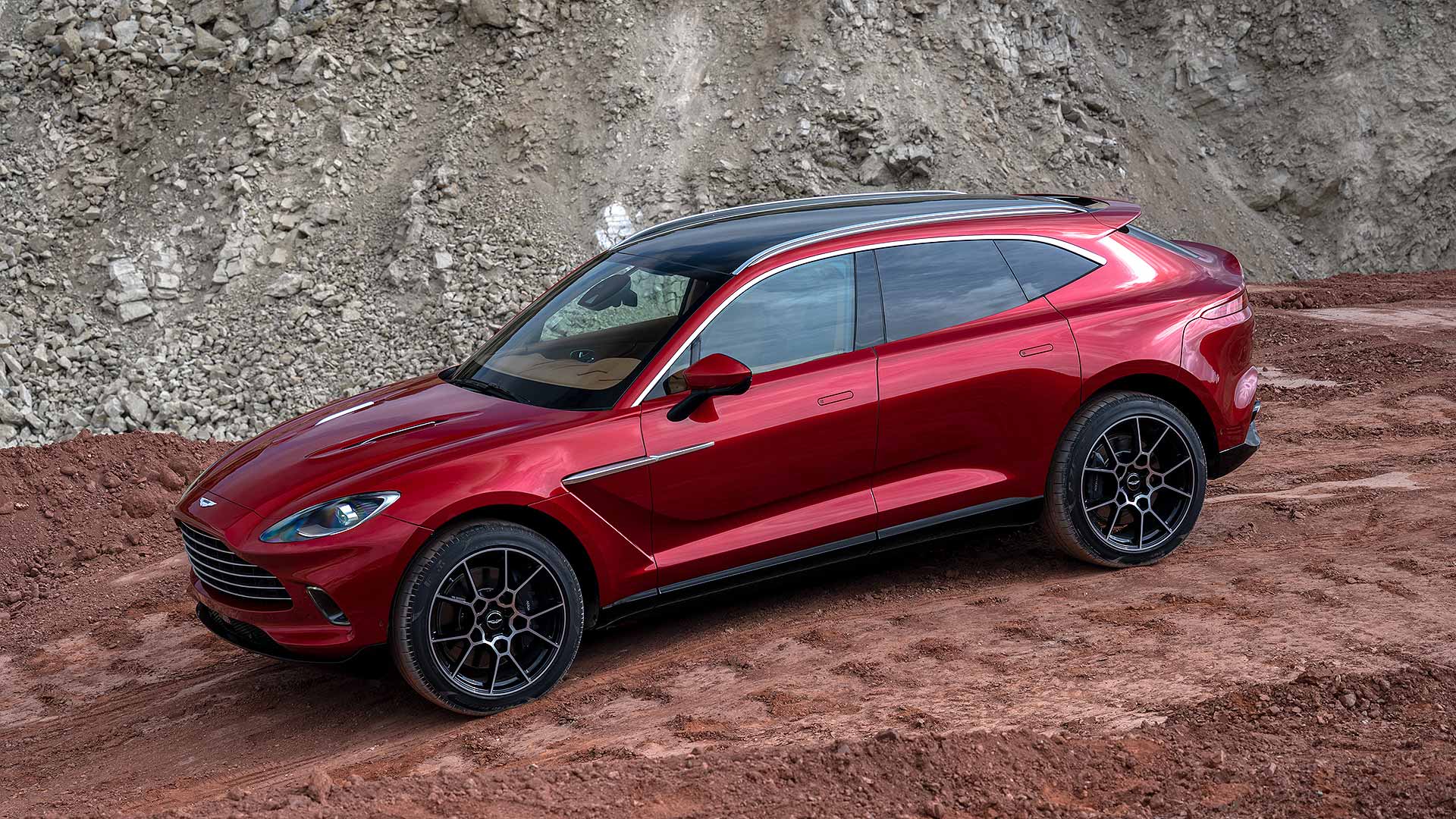 Can the DBX off-road? You bet. All-wheel drive is standard. It can wade through water 500 mm (nearly 20 inches) deep. The ride height can be raised. It has Aston Martin’s first ever hill descent control. The engineers have even confirmed it can reverse a trailer into water while towing a boat – oh, and they spent a lot of time going sideways honing the dynamics at the Walters Arena rally stage in Wales. 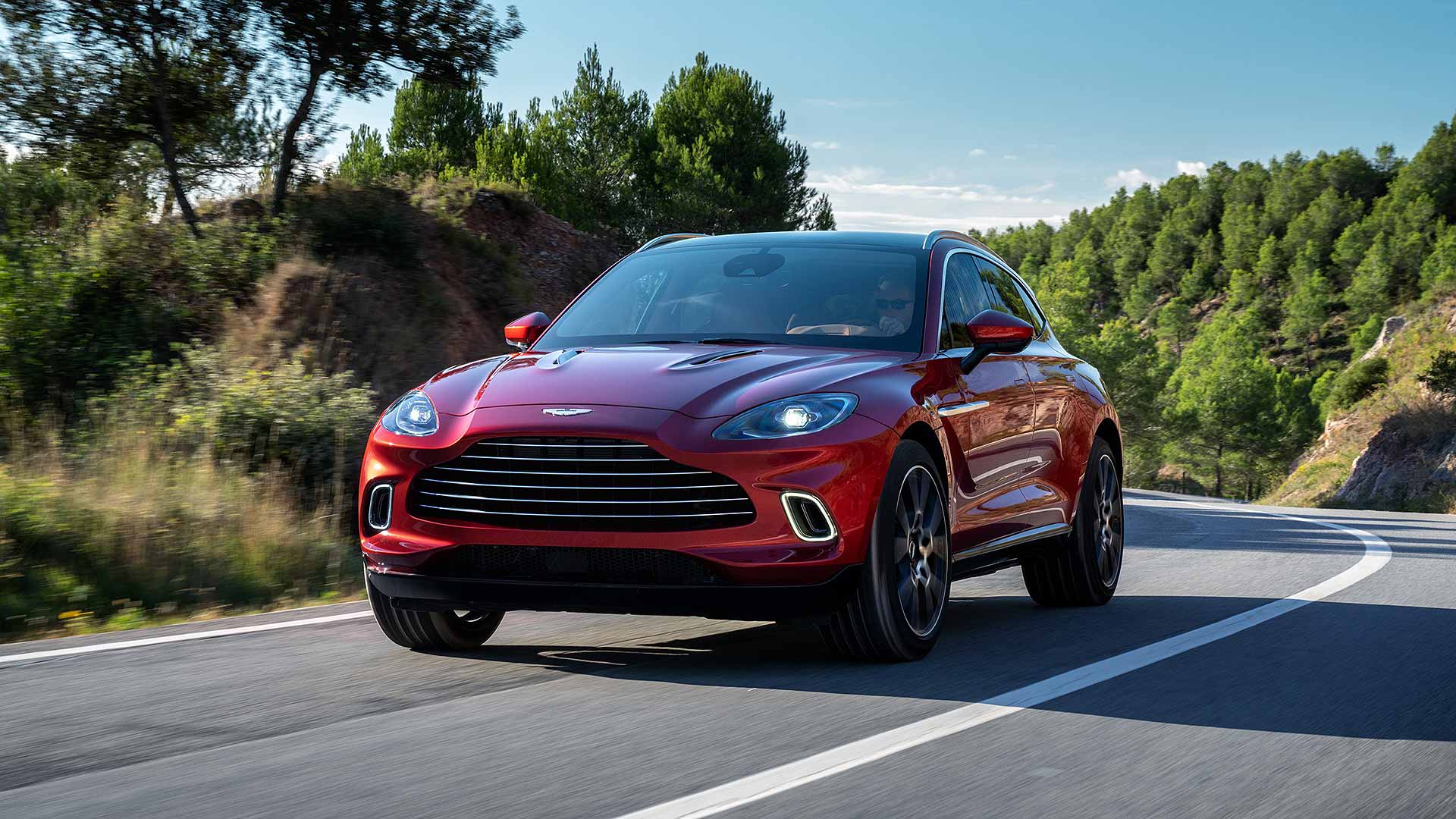 On-road driving hasn’t been compromised, though. The DBX still undertook Aston’s 8,000 km (5,000 mile) Nurburgring sign-off test. Dynamics engineer Matt Becker said the sideways grip of the DBX is “genuinely incredible… Our on-track and on-road performance has seen us push the boundaries of what is possible for an SUV and in many instances, we have seen performance credentials more likely seen in one of our sports car models.” 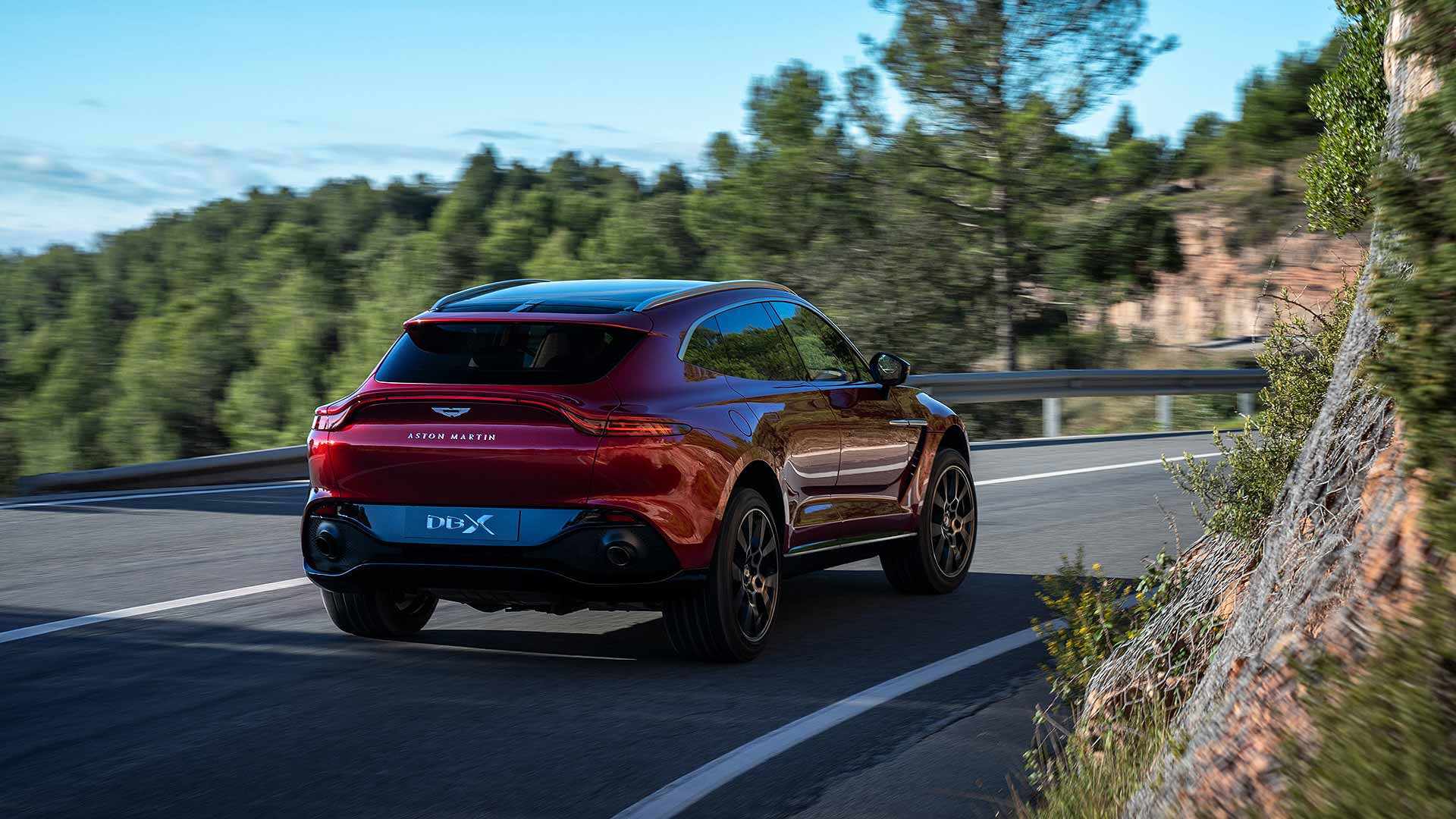 Aston Martin validated the DBX aerodynamics with a unique test – towing a trailer carrying a DB6 sports car. Other more mundane tests on a 40 percent scale model honed the fixed rear spoiler which just so happens to mimic the Vantage sports car. There isn’t a rear wiper – instead, water is removed by airflow through the rear wing. 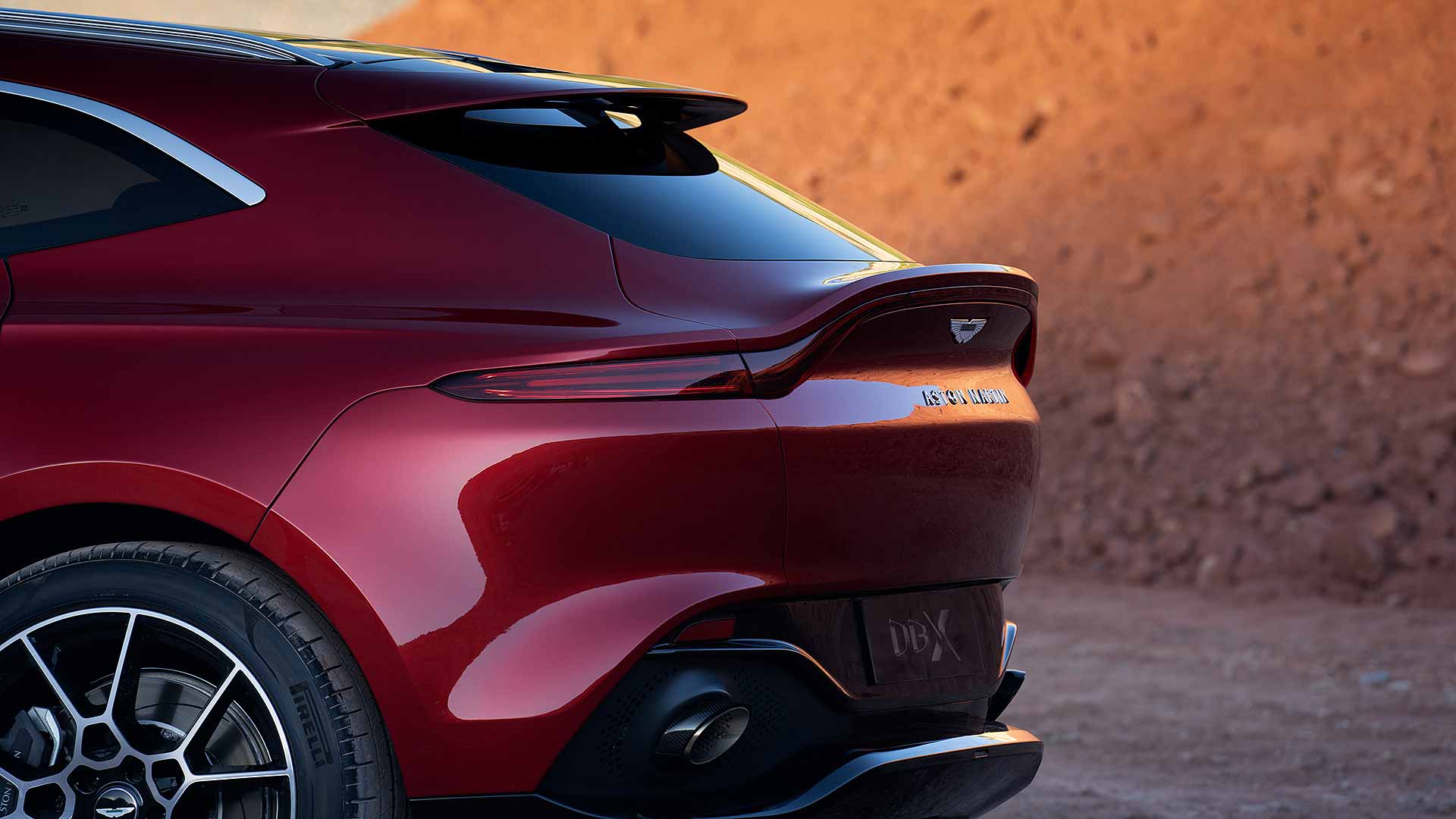 Aston Martin Lagonda President & Group CEO, Dr. Andy Palmer said: “I can’t emphasise enough how incredibly exciting and significant DBX is for Aston Martin. Through its development alone, this beautiful SUV has already taken the company into new territories and in inspiring directions. This is a real landmark for this great British brand and I promise that DBX will reward all who experience it in their everyday lives.” 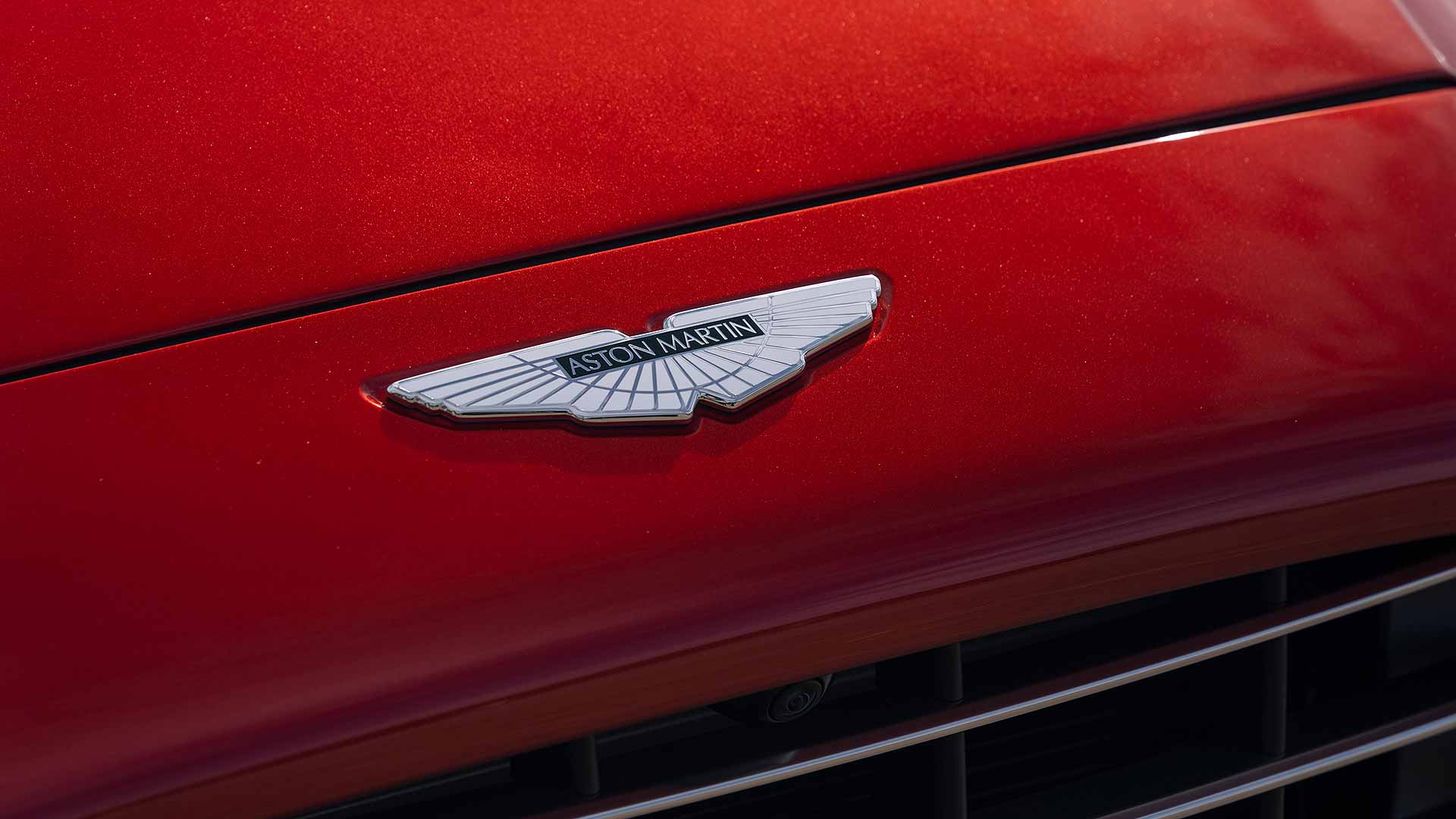 Expected to be many people’s first Aston Martin, Palmer said the DBX had to stay true to the sports car firm’s core values, “while also providing the lifestyle versatility expected of a luxury SUV”. He reckons the firm has achieved this and is proud the DBX is “beautiful, hand built, yet technologically advanced”.

The first 500 DBX will be special ‘1913 Package’ editions. These will all be personally inspected by CEO Palmer on the production line. Owners will also get a build book signed by Palmer and designer Marek Reichman – and, uniquely, an invitation to a special cocktail party in a Waldorf Astoria in the buyers’ region.

Nearly five years in the making 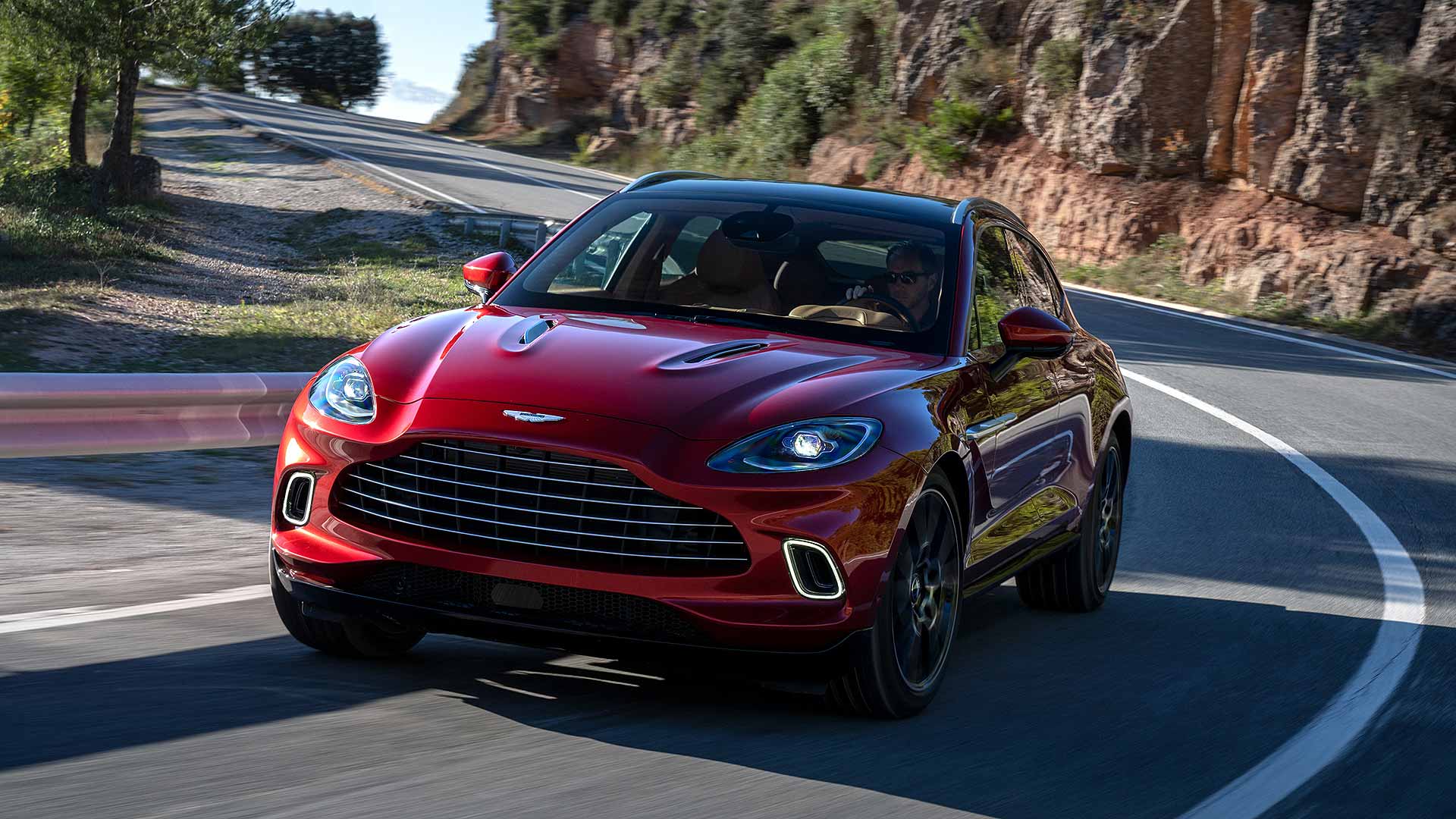 Development of the DBX started back in 2015. The decision to build it on a unique SUV platform is rare in the car industry; it’s enabled Aston Martin to “innovate and push the boundaries of what British design and engineering can create,” says the firm. A full five-seater, a design target was “class-leading spaciousness” both front and rear. Every DBX gets a full-length panoramic glass roof. 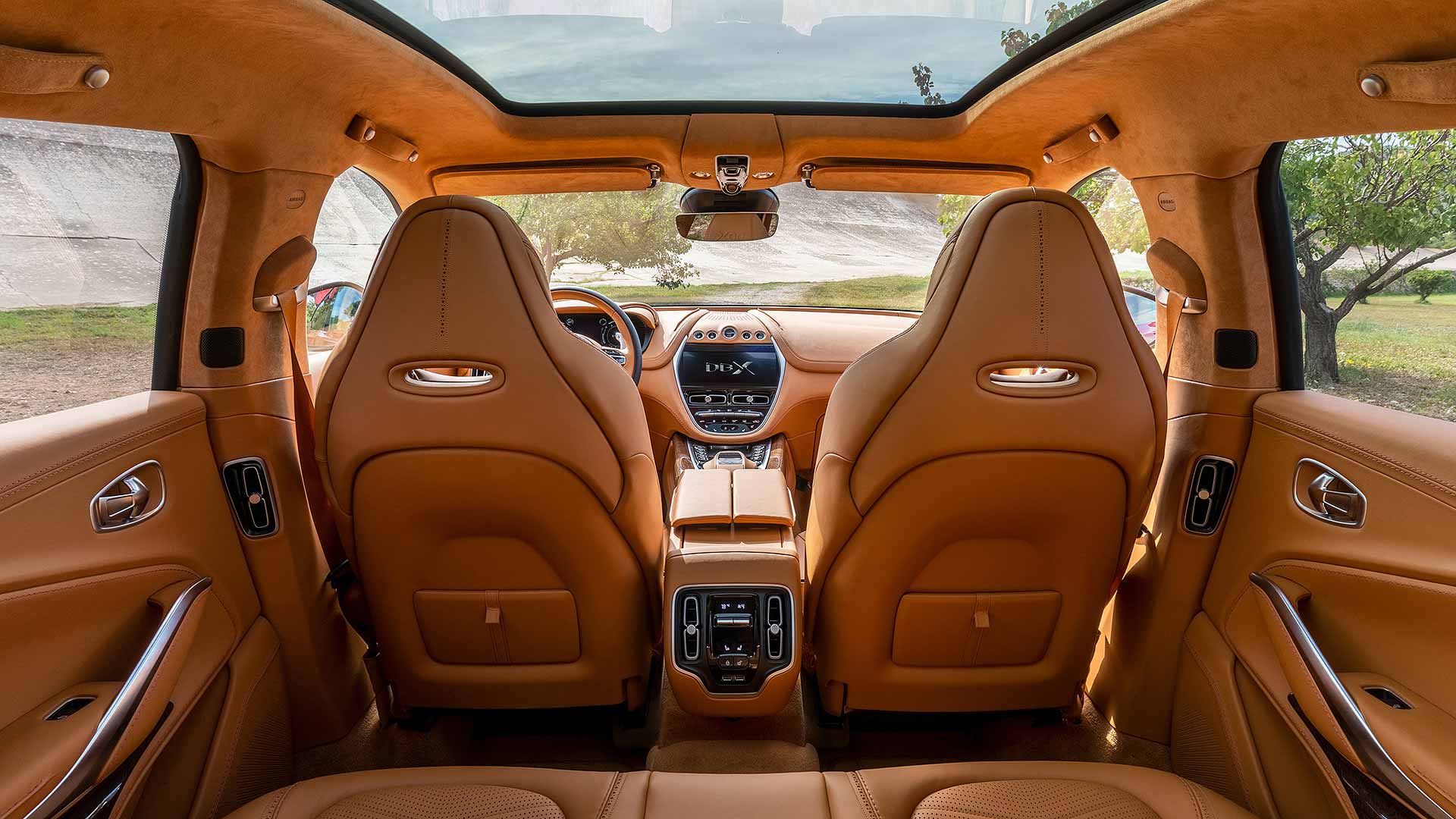 A little slice of Aston Martin Vantage can be seen in the DBX’s seats. Derived from those in the DB11, they use ‘sports car seat packaging’ which delivers lots of support and comfort for the driver, but also ample knee and footwell space for those in the rear. The seats are trimmed in Bridge of Weir leather.

A range of materials are used in the interior – metal, glass and (real) wood, the auto industry’s first Alcantara headlining, and the option of a new fabric made from 80 percent wool. Those who don’t like carbon fibre can choose a new flax composite made from the same plant as fine linen.

A target was accommodating the world’s 99th percentile male and 5th percentile female (Aston’s Female Advisory Board provided input into the design of the DBX – and six months was spent just perfecting the driving position). And their luggage: the boot is 632 litres (22.3 cu ft) with the 40:20:40-split rear seats up, 1,530 litres (54.0 cu ft) with them down. And there’s more… 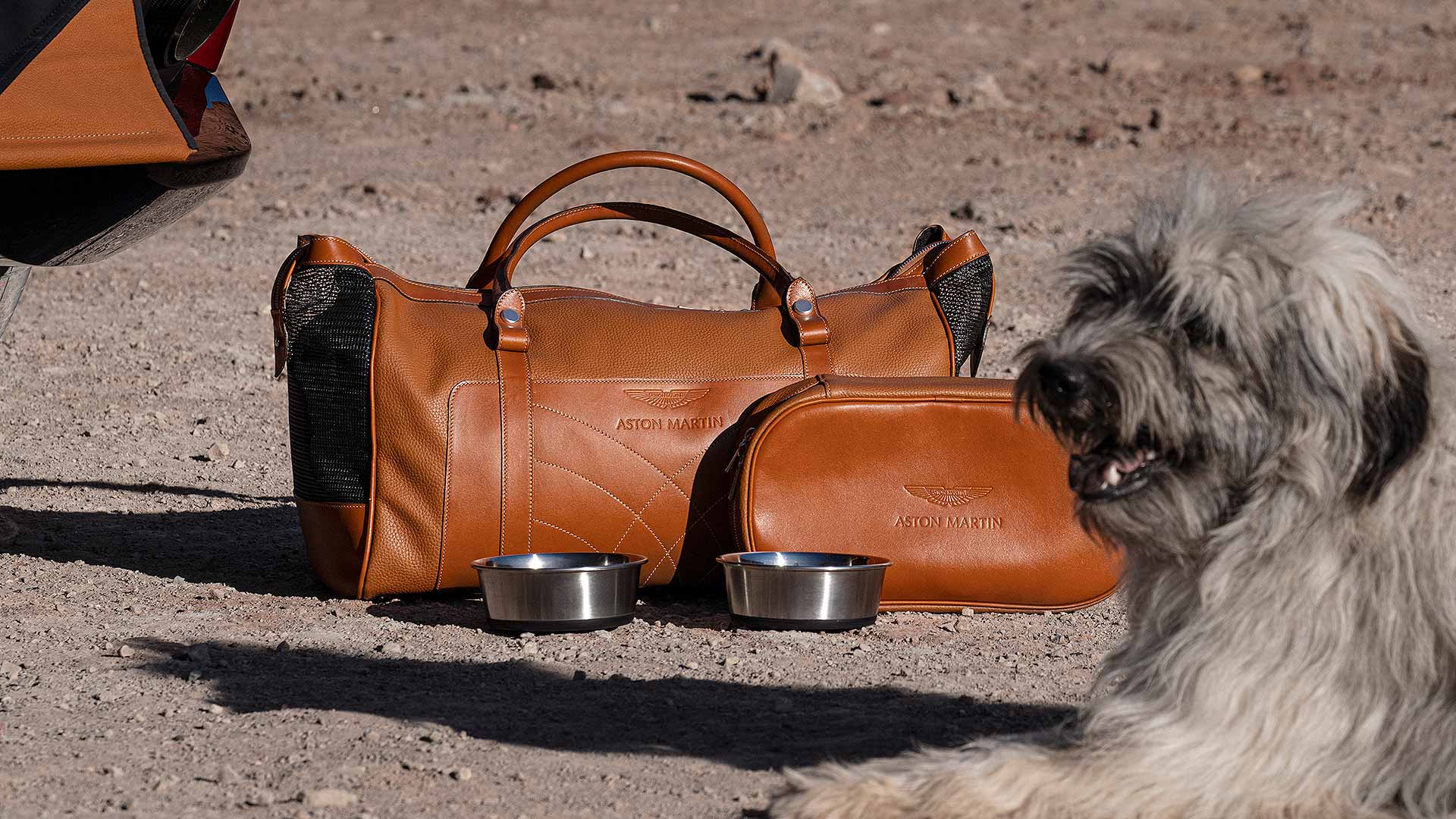 Aston Martin has created a special set of accessory packages from launch – including a ‘Pet Package’ that comprises a portable washer to hose down your muddy dog. There’s also a Snow Package that includes boot warmers to ease the pain of starting out on a ski trip. Handcrafted luggage is also available.

The Aston Martin DBX rides on air suspension, with a powerful 48V electric anti-roll control system (or eARC). It can raise the ride height by 45 mm (1.77 in), lower it by 50 mm (1.97 in) and limits body roll to a level “more akin to that of a sports can than an SUV”. 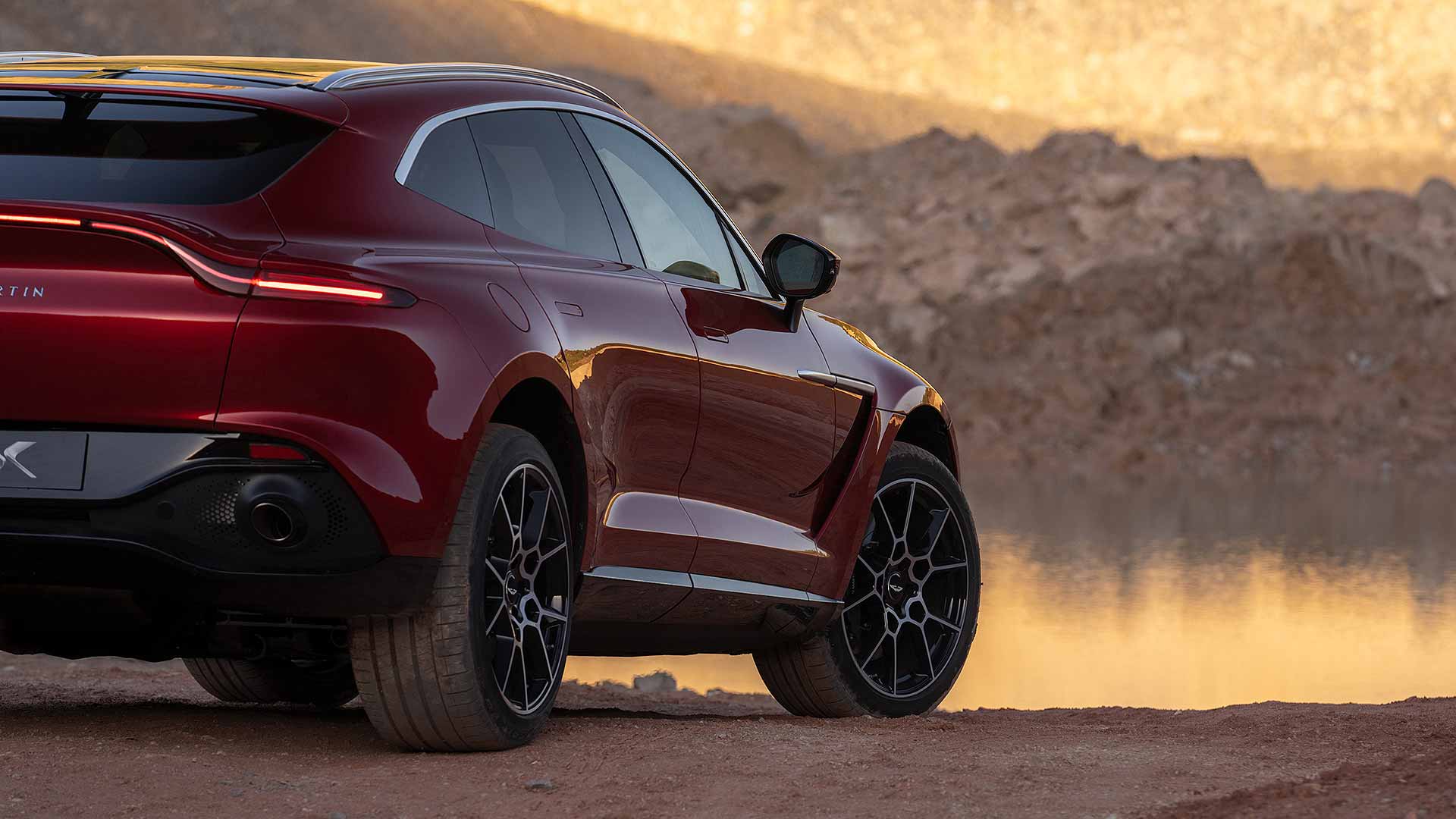