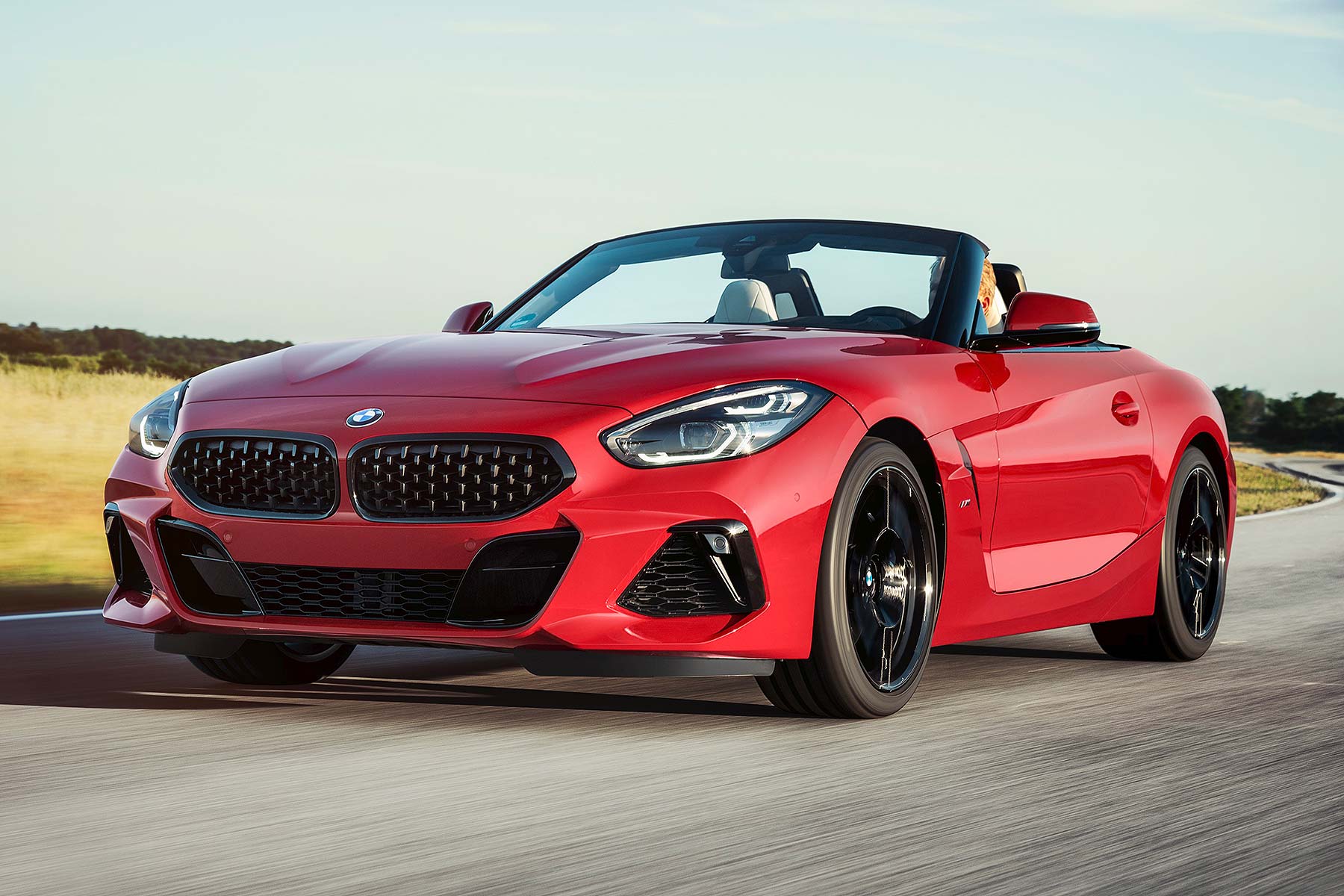 BMW has chosen Monterey Car Week to give the all-new Z4 roadster its global debut – exactly a year after showing the concept version there. The new open-top sports car was revealed at the Pebble Beach Golf Links in Monterey, California. 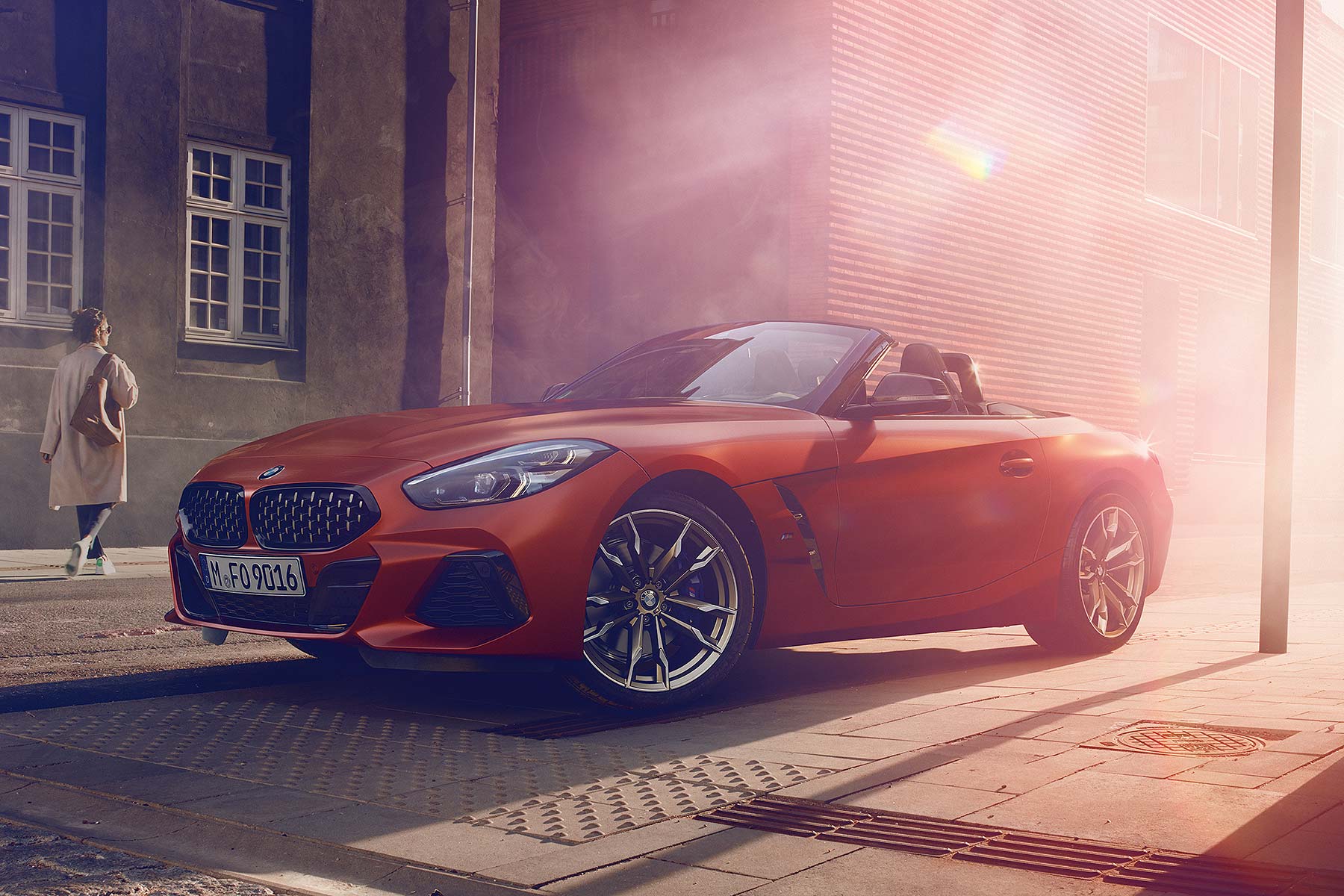 Previewed in top-spec M40i First Edition guise, the new BMW Z4 will launch in early 2019. BMW is calling it the latest in a line of two-seat sports cars that dates back more than 80 years. 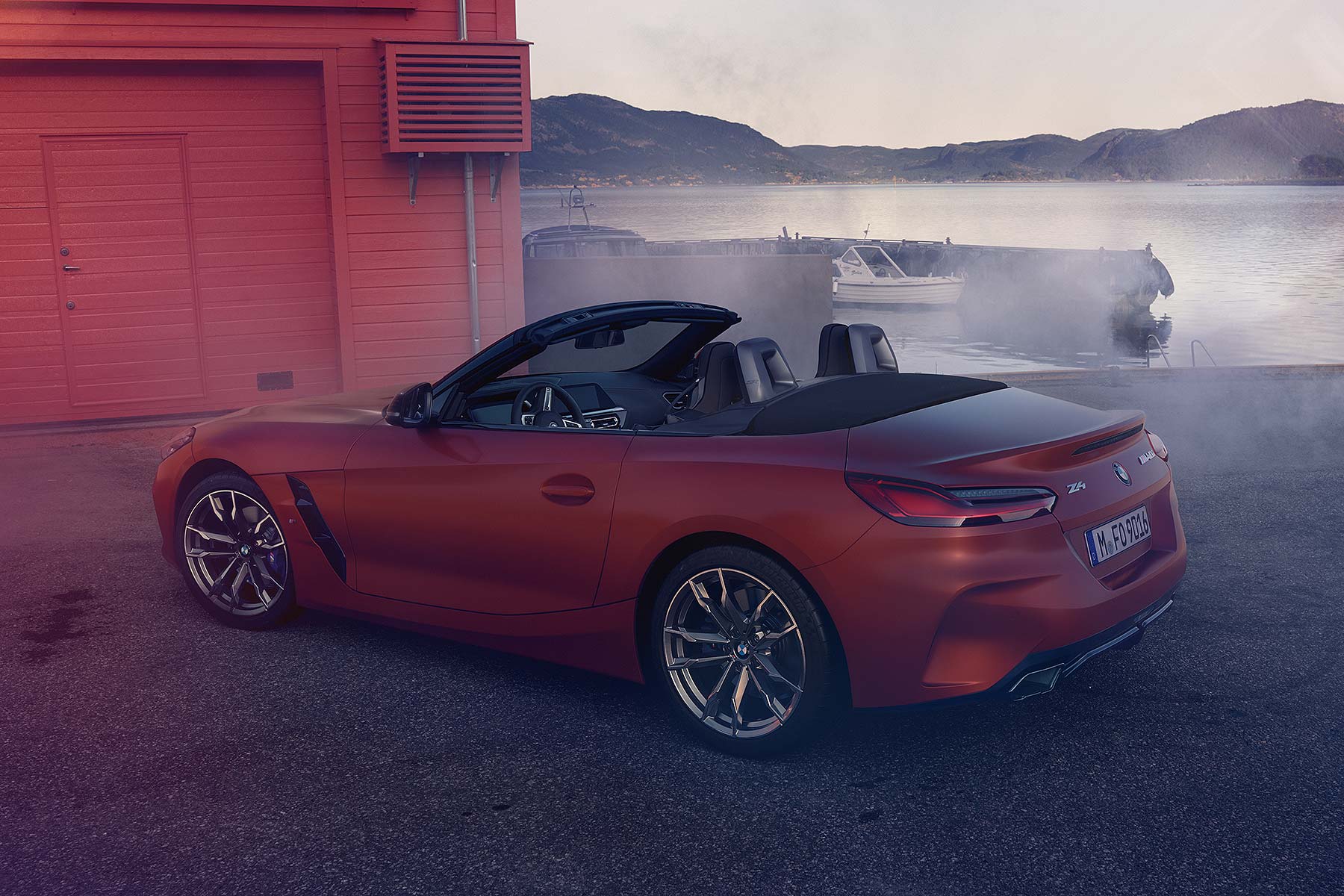 The new BMW Z4 has been co-developed with Toyota (the Japanese firm’s new Supra coupe has has yet to be fully revealed) but BMW says all of its brand-defining traits have been retained. The new Z4 has a 50:50 weight distribution, a central seating position and a low centre of gravity.

The wheel tracks are wide for stability and grip, while the wheelbase is compact for agility and sporty handling. 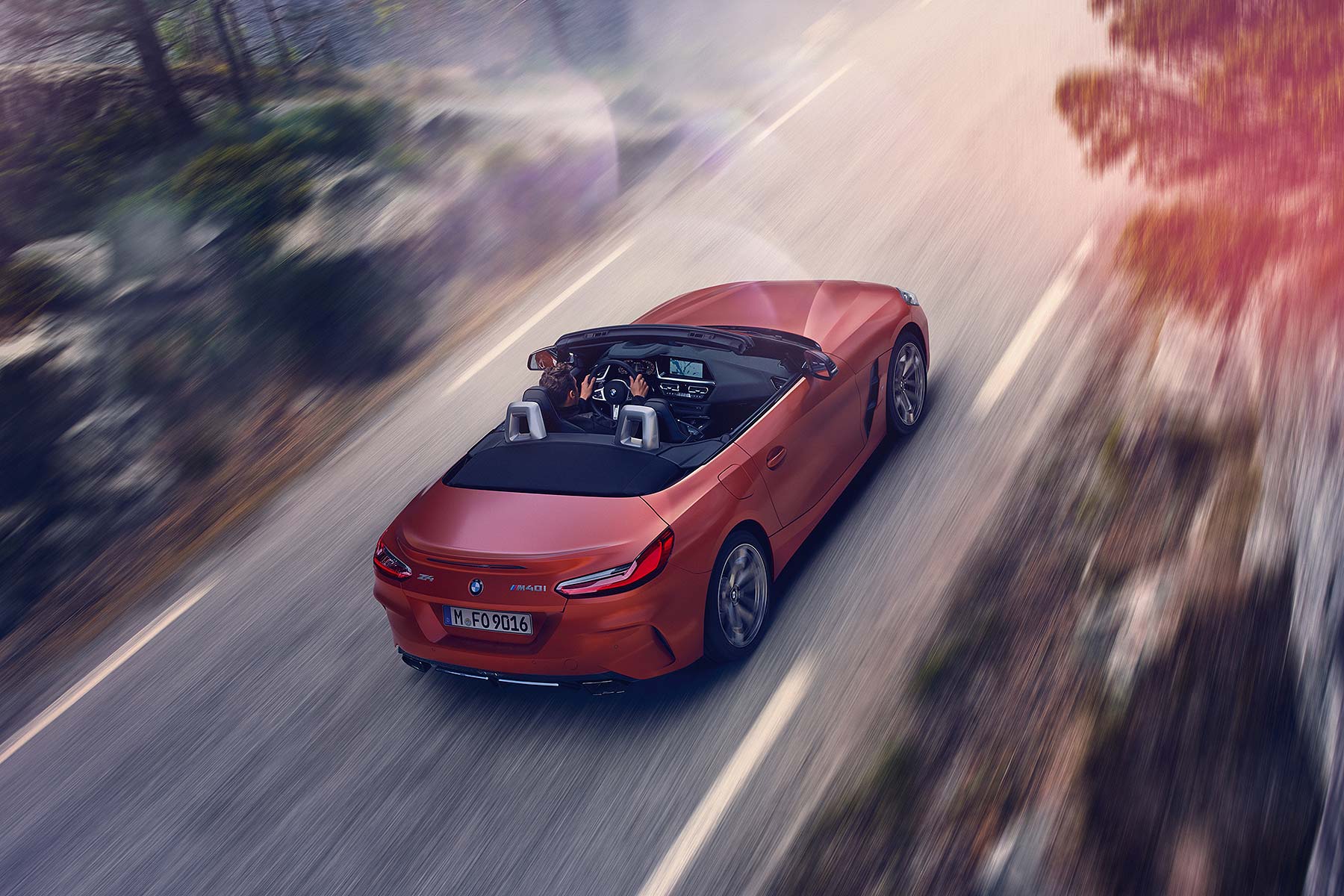 BMW is reserving the full technical reveal for the weeks leading up to the 2018 Paris Motor Show in October, but has confirmed the Z4 M40i is powered by a six-cylinder TwinPower Turbo engine producing 340 horsepower. This gives acceleration from 0-62mph in 4.6 seconds. 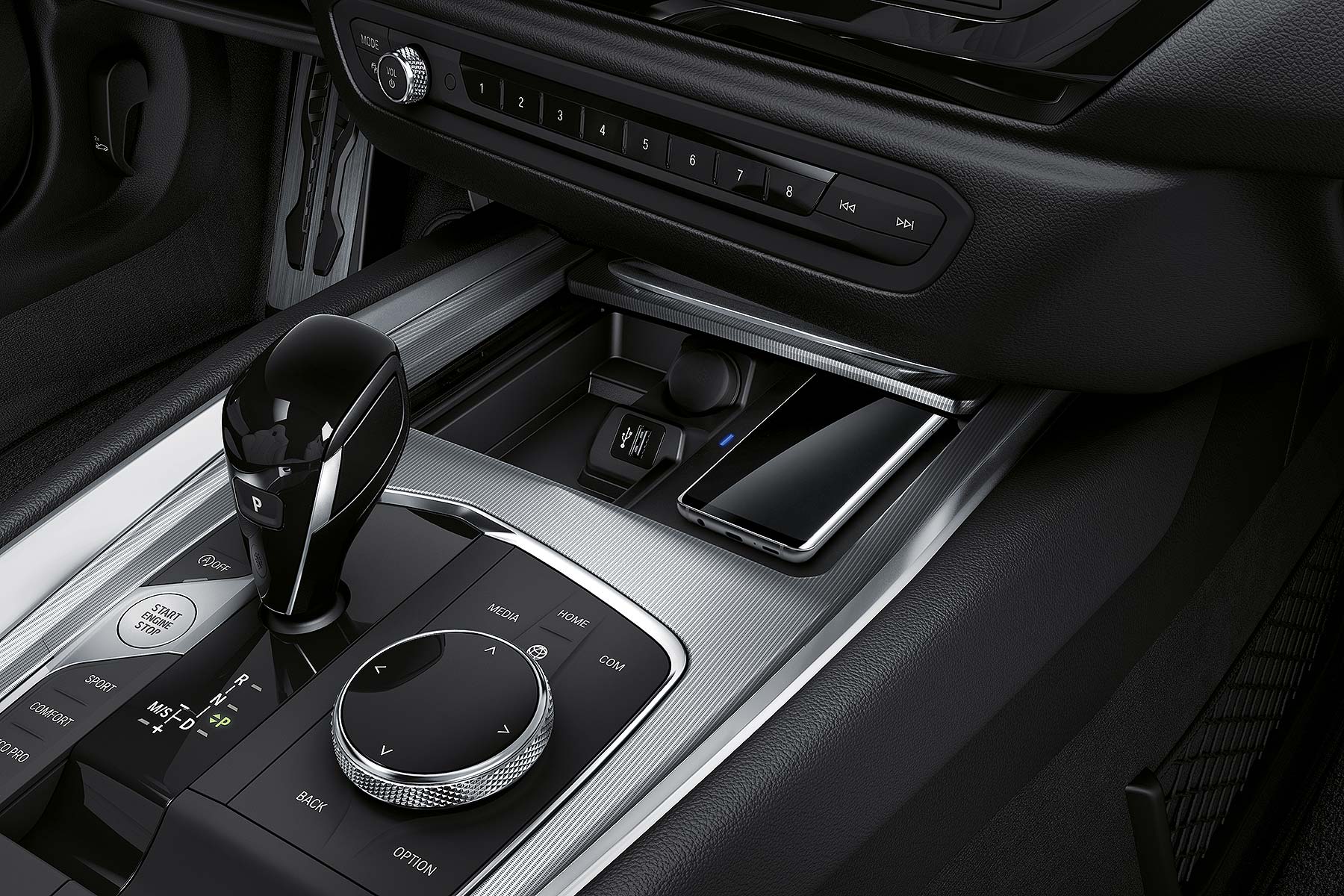 The M40i 3.0-litre will be paired with an eight-speed automatic transmission, although lesser Z4s are expected to come with traditional stick-shift manual gearboxes for retro roadster authenticity. 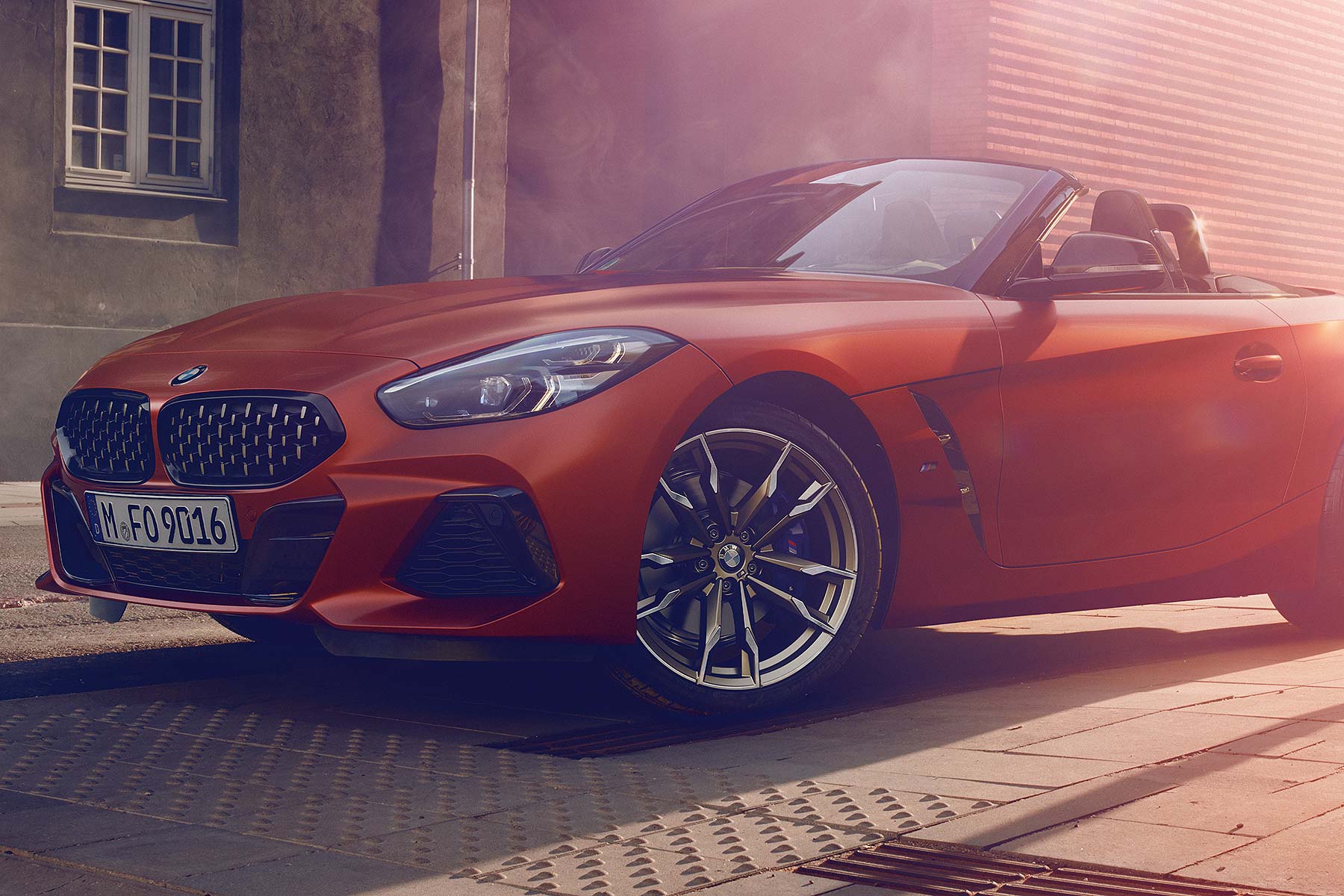 Drawn from the BMW Concept Z4 that was shown during 2017 Monterey Car Week, the production Z4 is finished in matt-finish Frozen Orange metallic. BMW says vertically-stacked headlights, sporting mesh for the kidney grilles and a wide bonnet stretched over the front wheels give a racy character. 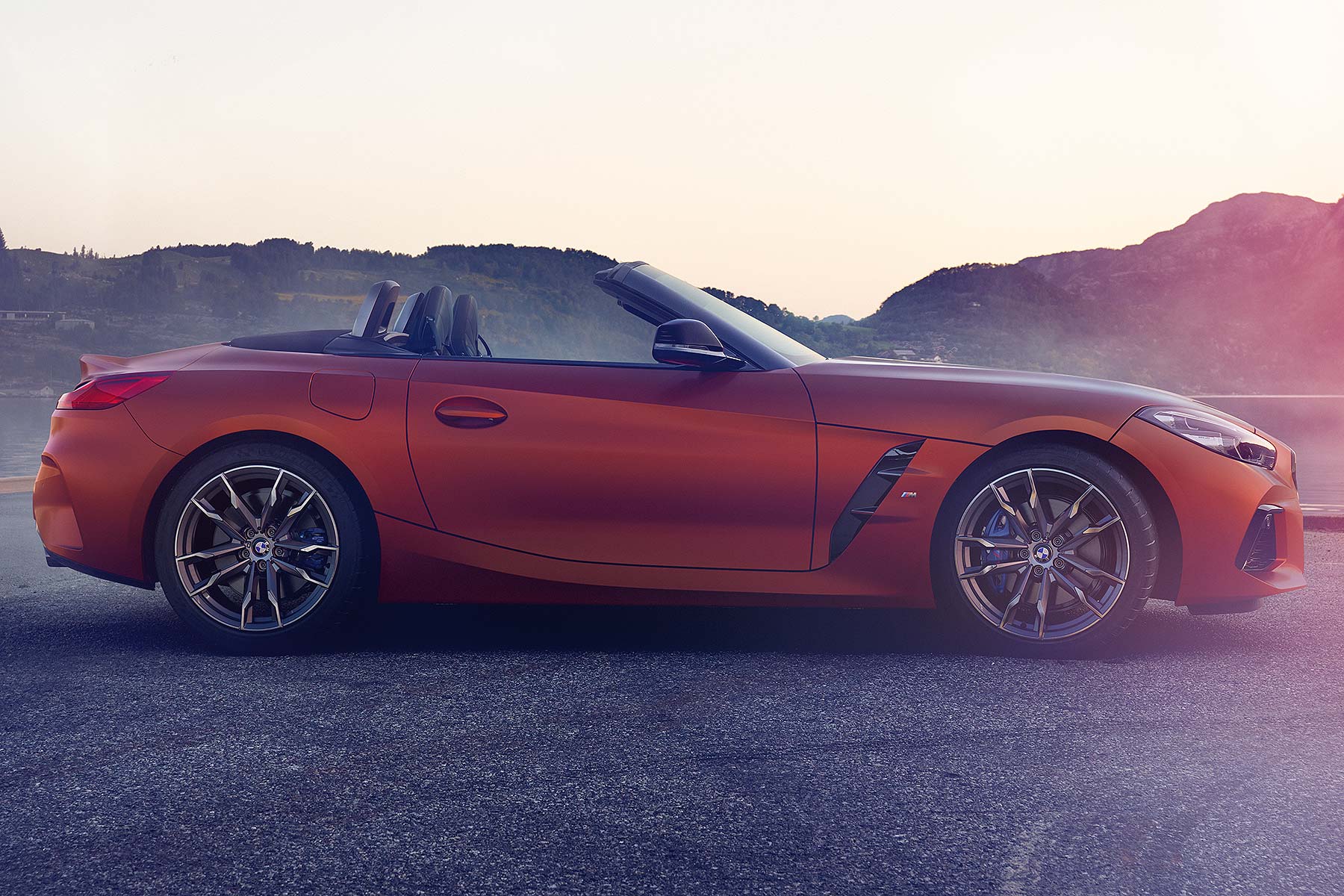 Moving rearwards, there are oversized air breathers on the front wheel arches, plus a spoiler integrated into the rear deck.

The light alloy rims are a double spoke design and have a bicolour finish. 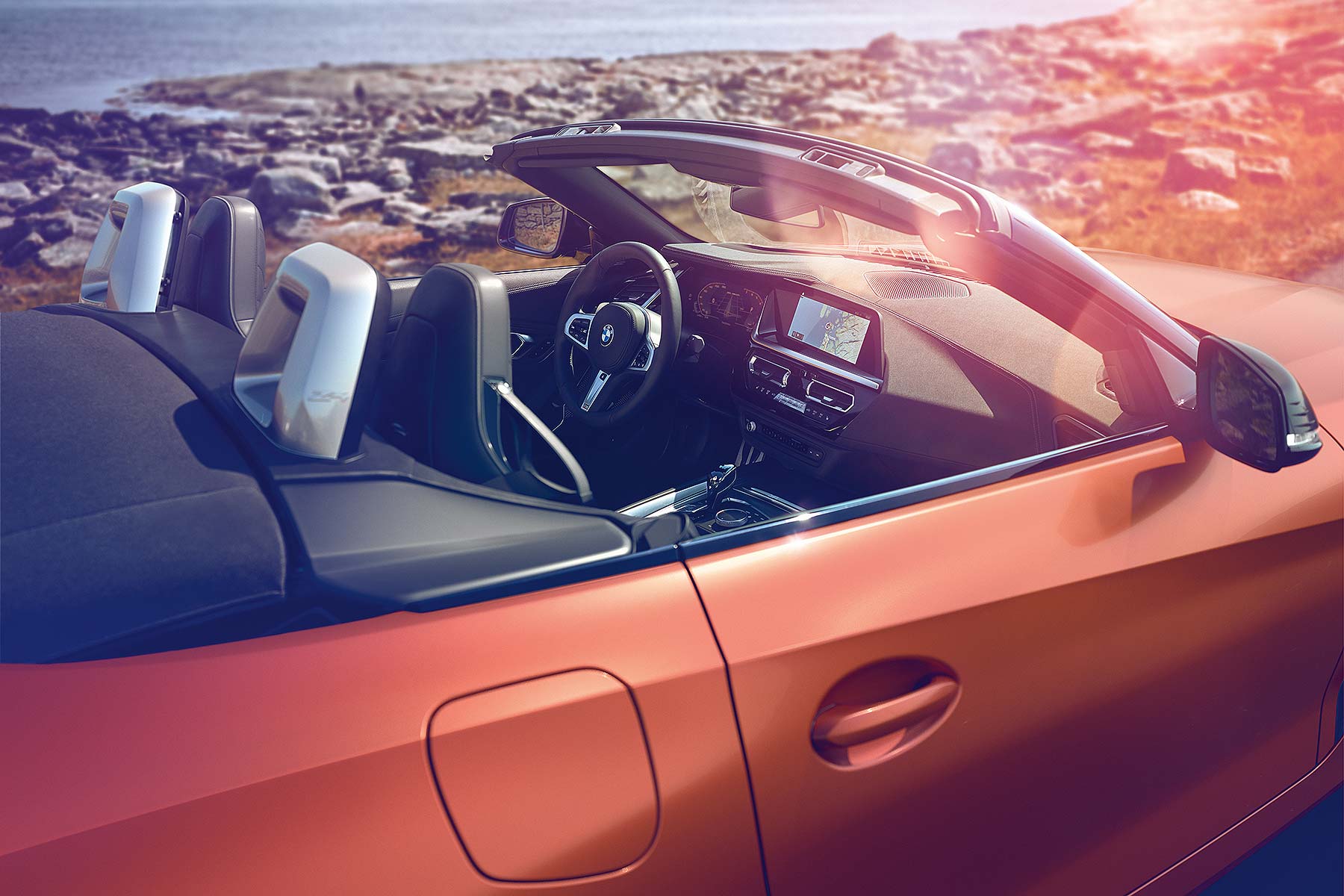 More importantly, BMW has ditched the cumbersome folding hard-top roof of the outgoing Z4, and reverted back to a folding soft-top – finished here in silver-effect anthracite. It means the new car can be lighter and also more elegant. The fabric roof folds more compactly into the rear. 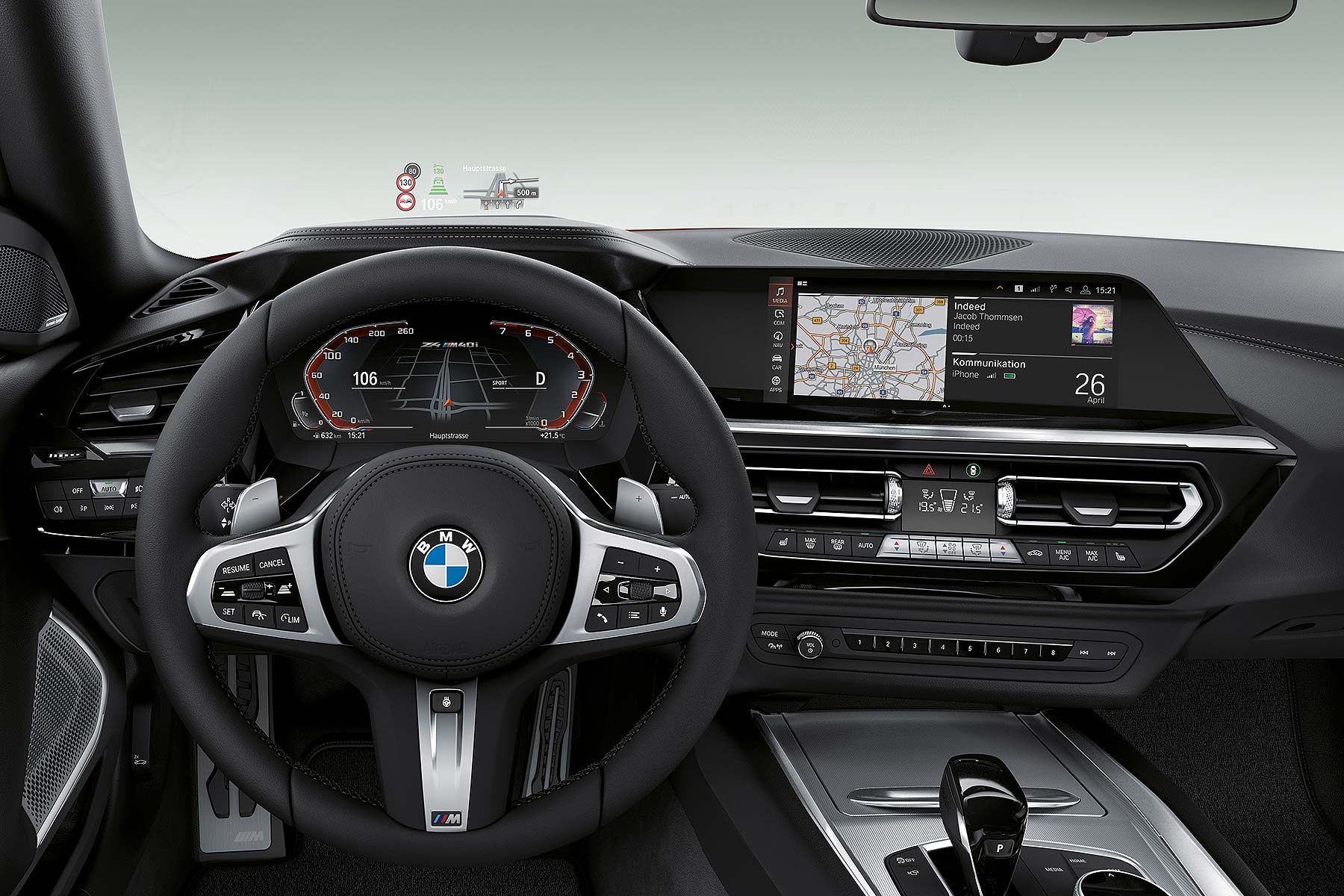 The interior appears to be a real step on, with a distinctive look and modern, high-quality detailing – perfect for taking on the standard-setting cabin of the Z4’s arch-rival, the Audi TT. BMW says the “forward-oriented lines underscore the driver-oriented cockpit styling”. All the controls are clearly structured, so the driver can concentrate on actual driving, not trying to locate switchgear.

Being the First Edition variant, this Z4 M40i is equipped with Vernasca black leather, electric memory seats and a Harman Kardon surround sound audio system. It also has a head-up display, the first time one has featured on a roadster. 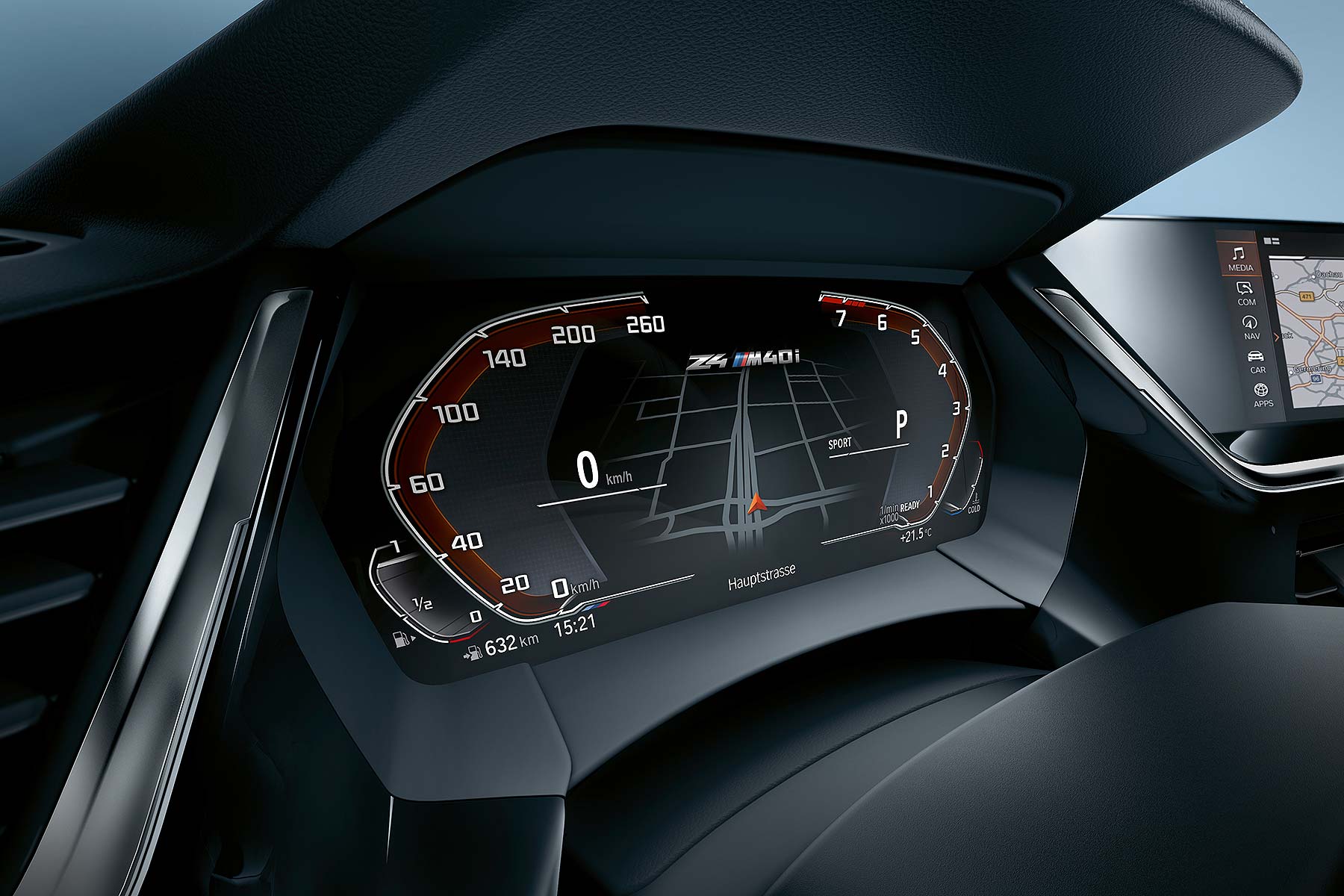 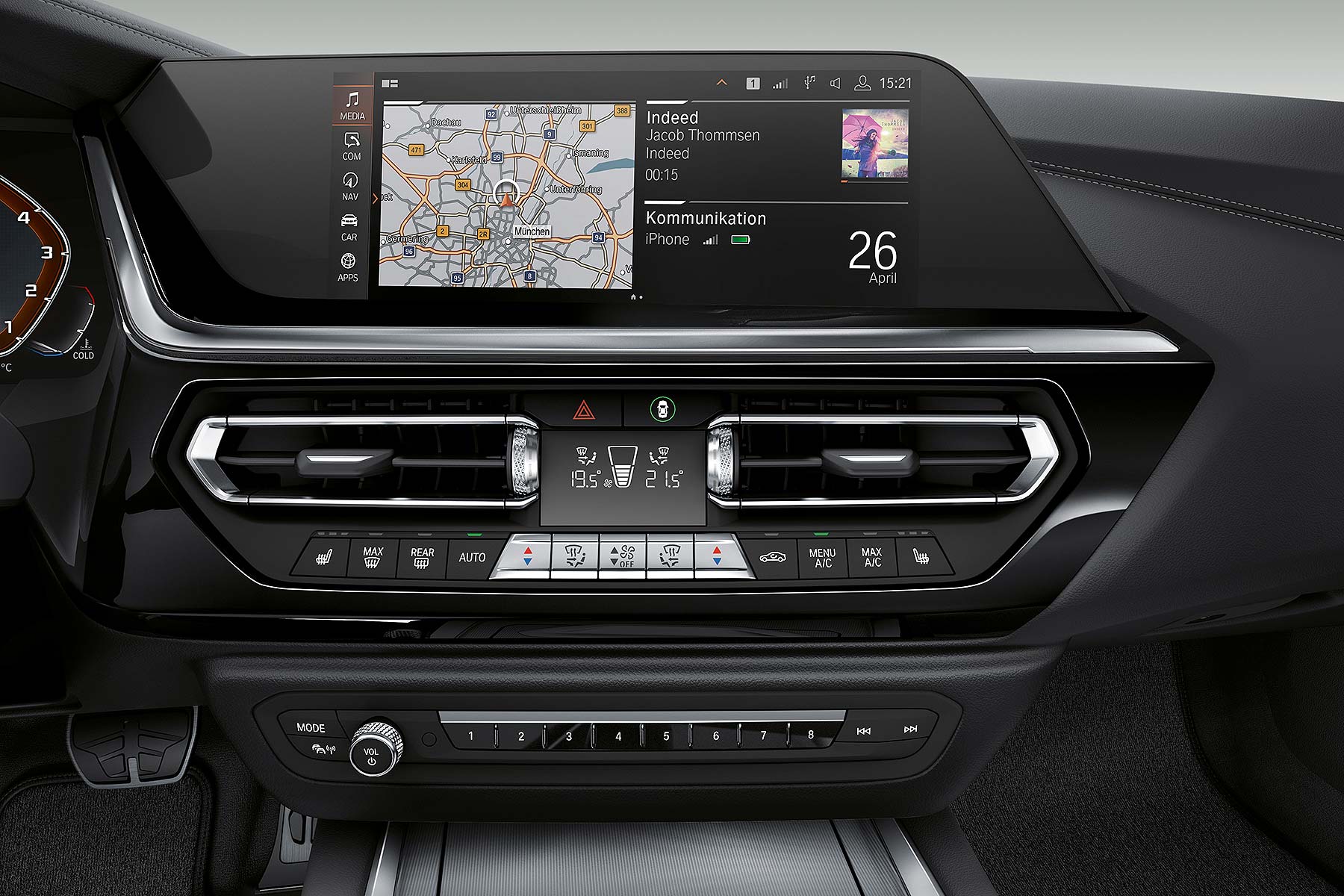 …and well supported by a high-end touchscreen infotainment system. Amongst modern BMWs, the interior of the new Z4 is a real standout. 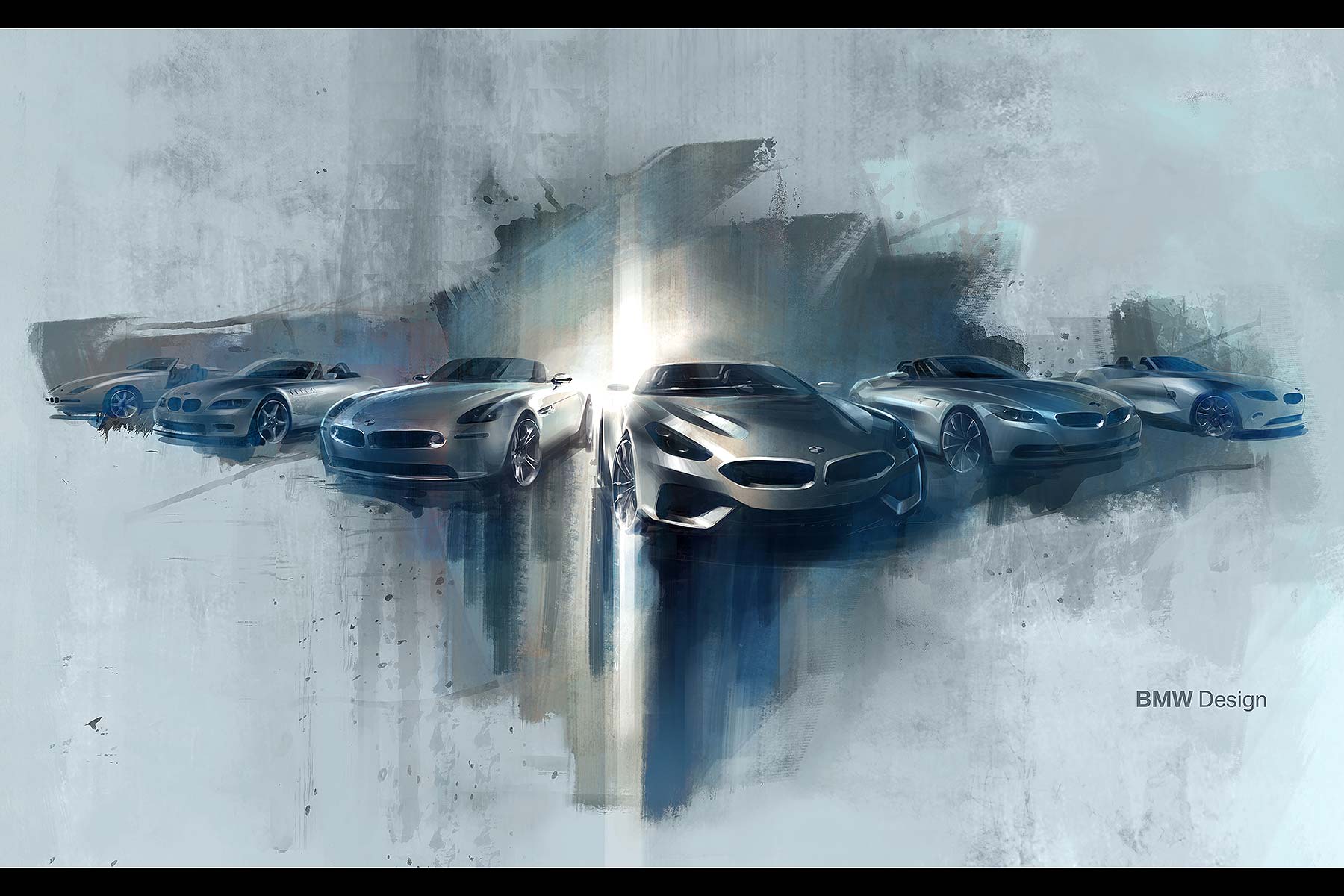 BMW knows the Z4 has some big shoes to fill. The outgoing Z4 may have lacked focus, but the original car was a design landmark thanks to its Chris Bangle lines. The original Z3 was the first modern BMW roadster, while the Z1 was a crazy 1980s flight of fantasy that somehow made limited-series production.

As for the Z8, that remains the halo of the Z-car range, as beautiful today as it was at launch back in 2000. 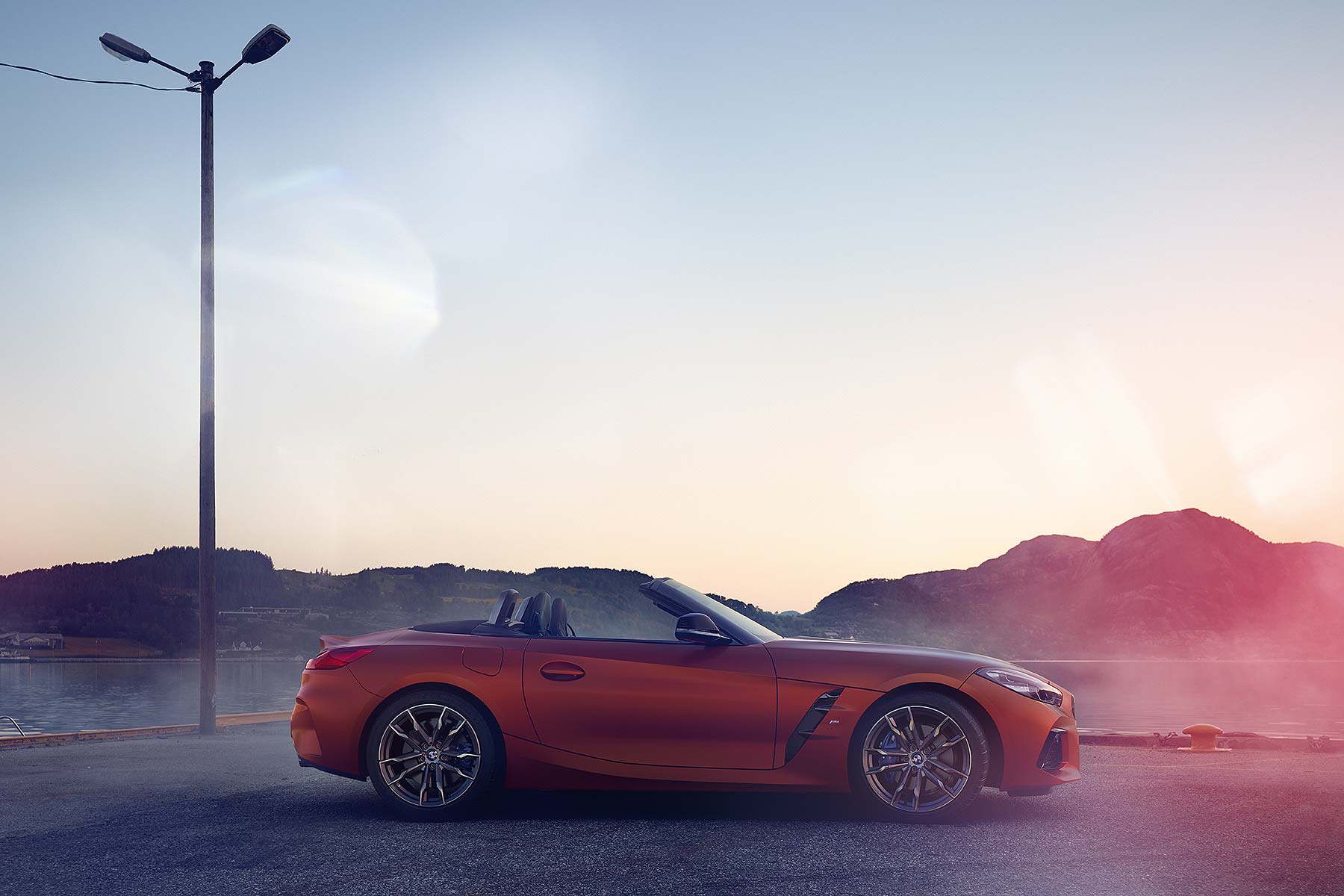 Ahead of its full debut at the 2018 Paris Motor Show, BMW wants us to pencil in 19 September. That’s when it will announce full details about the new Z4, including details of lesser engine variants, plus the various technical innovations and equipment options available.

For now, Monterey Car Week visitors can indulge and give the new car a full once-over. As they do that, join us here for a walk through the design process of the new BMW Z4 and how the production car came to life…