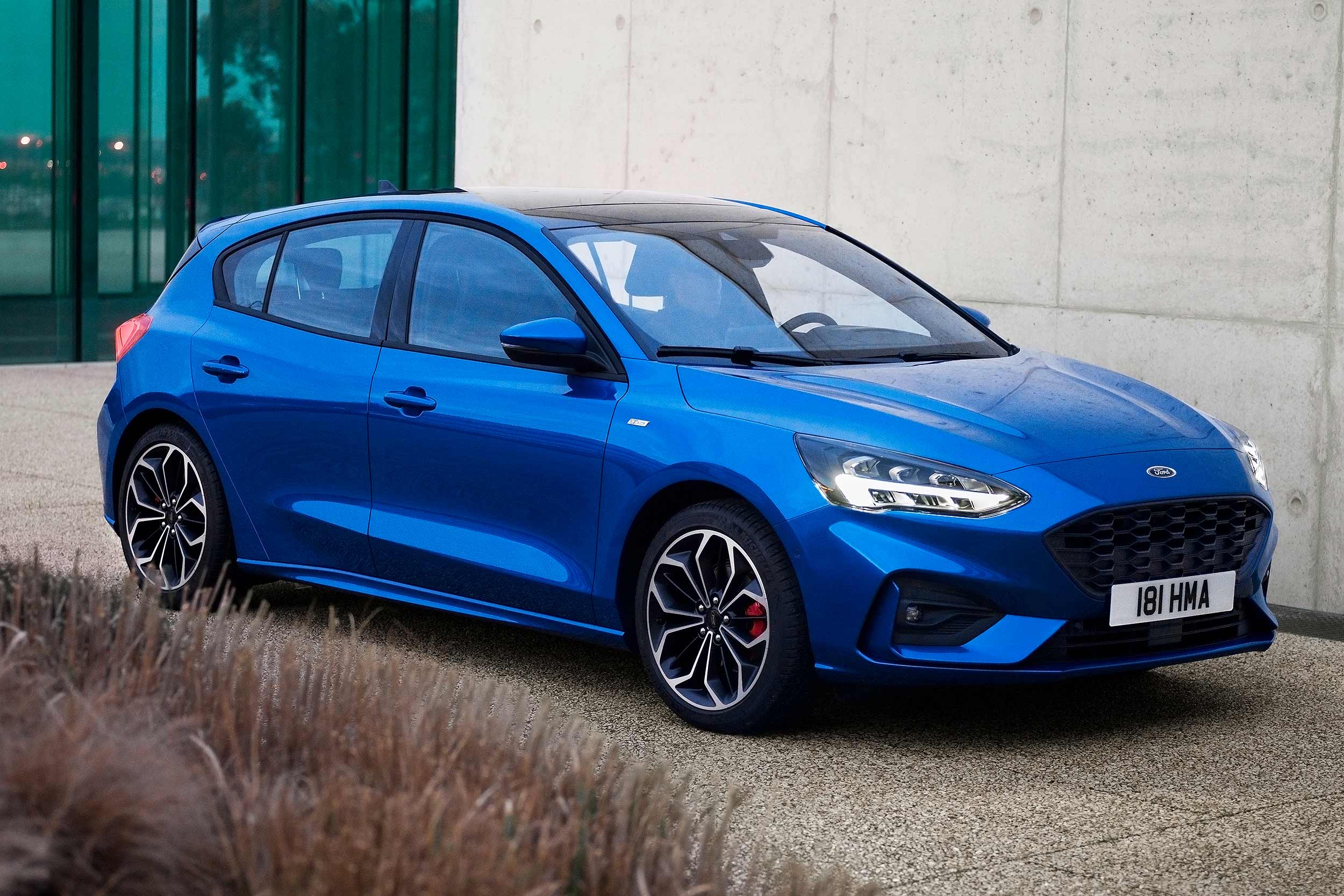 The new Ford Focus aims to build upon two decades of driver-pleasing appeal with more space, technology, luxury and comfort than ever before. Rather than rolling out a heavily-overhauled version of its predecessor, Ford’s invested in an all-new platform for the new Focus – and because the chance to design an all-new car from a clean sheet of paper doesn’t come around very often, Ford product development vice president Joe Bakaj says “we grabbed it with both hands”.

The original 1998 Focus changed the game by being brilliant to drive, in a sector full of dullards. The reason why so many high-volume hatchbacks today feel like premium cars behind the wheel is because of the Focus. These days, rivals such as the Volkswagen Golf have overtaken the Focus. With this new one, Ford’s looking to reassert its authority. 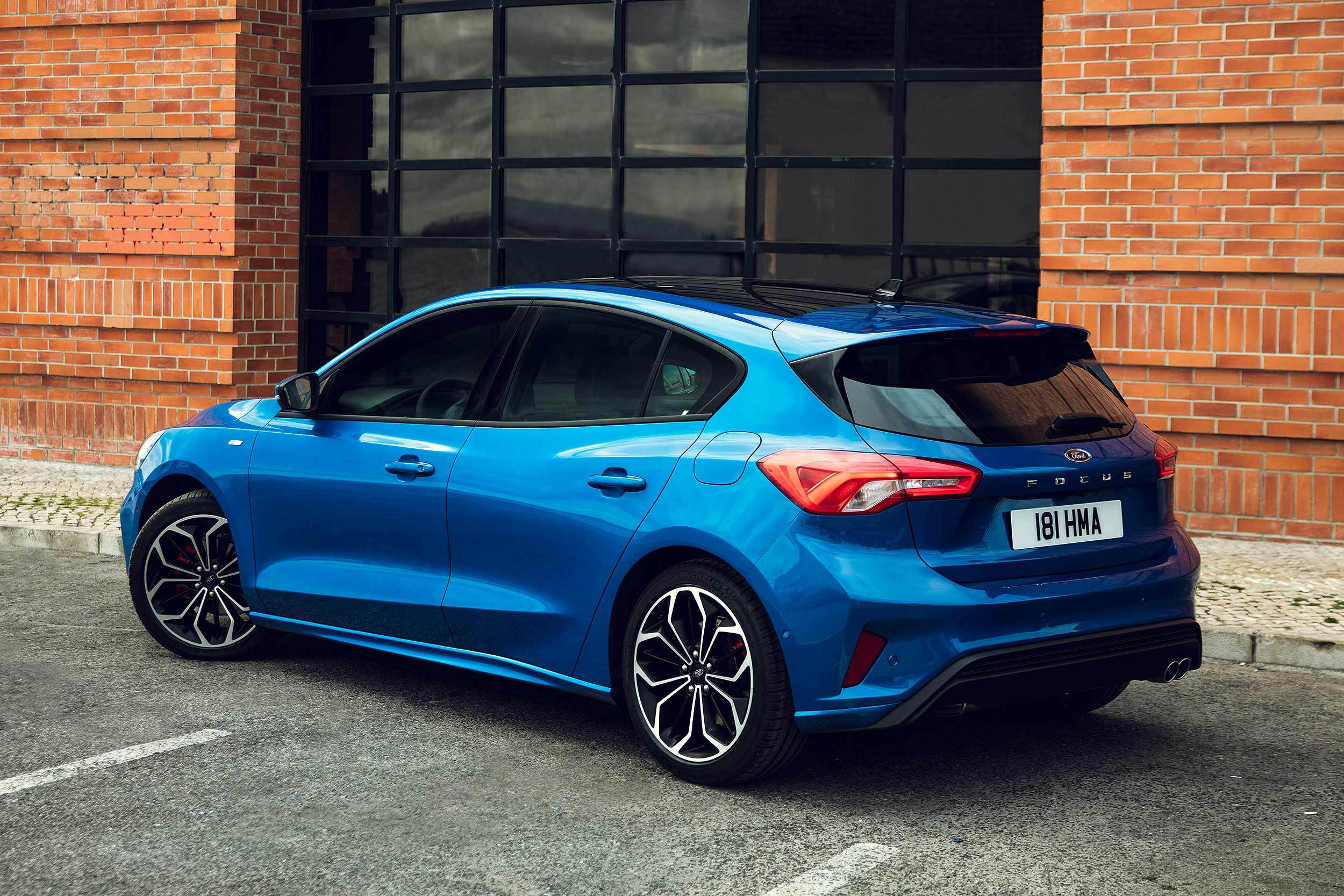 Ford is clear. The new Focus will be the most rewarding family hatchback on the market, both for drivers and passengers. It will also be the most confidence-inspiring and intuitive, the latter presumably in reference to the current car’s somewhat overburdened infotainment system and steering wheel controls. Ford says it’s never worked with customers more closely in developing this car: the new Focus is its most human-centric car ever.

The new Ford Focus will go on sale from August 2018, for deliveries in time for the September registration plate change. Prices will start from £17,930, which Ford says is £2,300 cheaper than the current Focus Style entry-level car. Zetec and ST-Line variants are, respectively, £850 and £250 cheaper. Other variants include ST-Line X, Titanium, Titanium X and the first ultra-posh Ford Focus Vignale: it costs from £25,450. There’s also a crossover-style Focus Active, another Focus first, whose prices are still to be confirmed.

‘Fall in love with a Focus’ 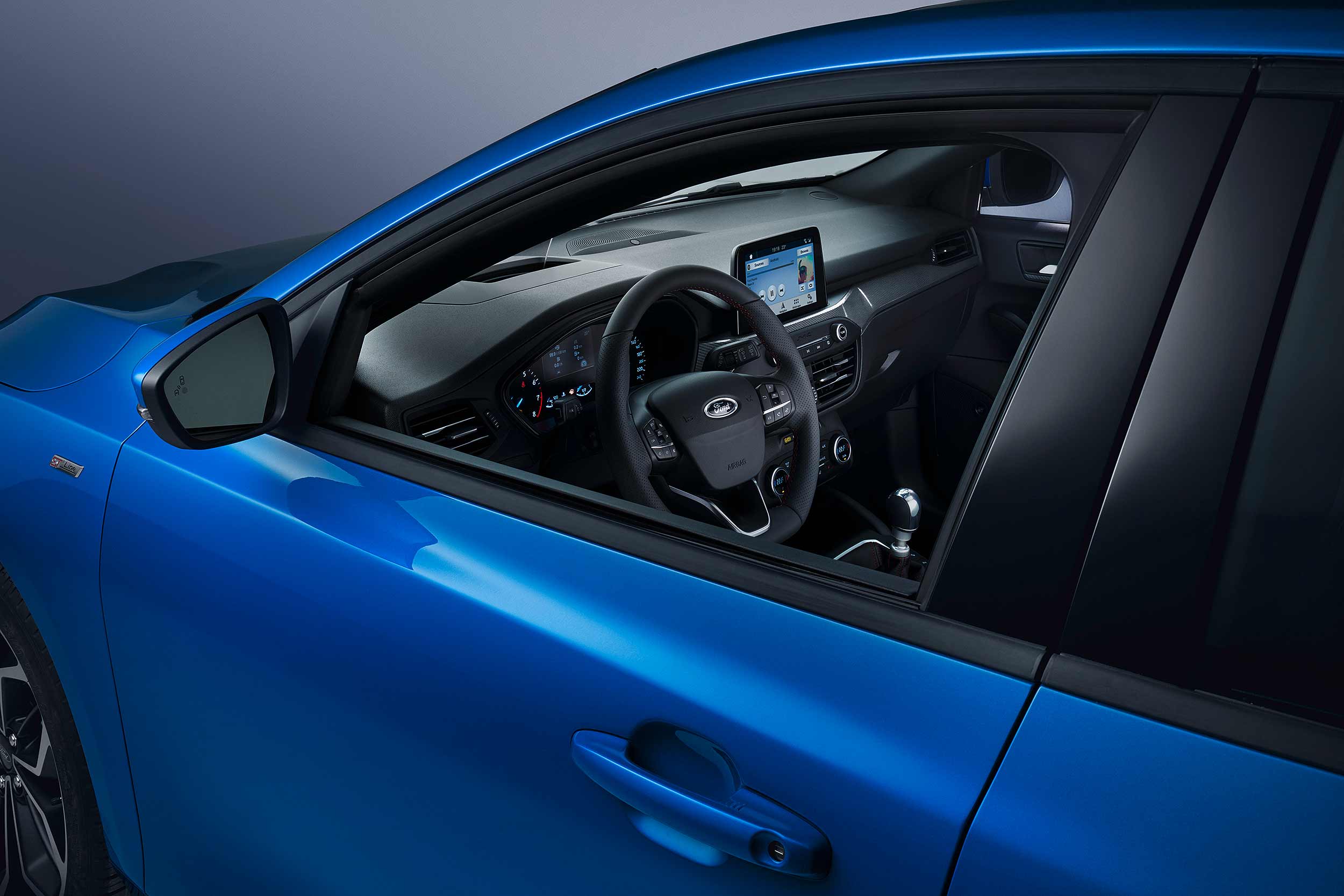 Ford’s European designers say they want customers to “fall in love with, and stay in love with,” the new Focus. Apparently, it’s all about “creating memorable moments of interaction”, which Ford’s done on the outside by lengthening the wheelbase and bonnet, shortening the overhangs and smoothing the wedge shape on the sides – making it look sportier and posher.

Bigger wheels that fill the wheelarches more fully give it a better stance, the body panels are sculptural and appear more tensioned than before, while longer wings and squat rear haunches give it an athletic appearance. Ford’s also made the grille even larger and fitted both front and rear lights as outboard as possible, to emphasise the car’s width.

Details you may spot at the rear: tail lamps are now two-piece, so the boot opening can be bigger, and there are distinctive LED lighting patters both day and night (same goes for the headlights). Also at the rear is a new individually-lettered ‘Focus’ script in the centre of the bootlid, whose satin-finished script further shouts ‘premium’. 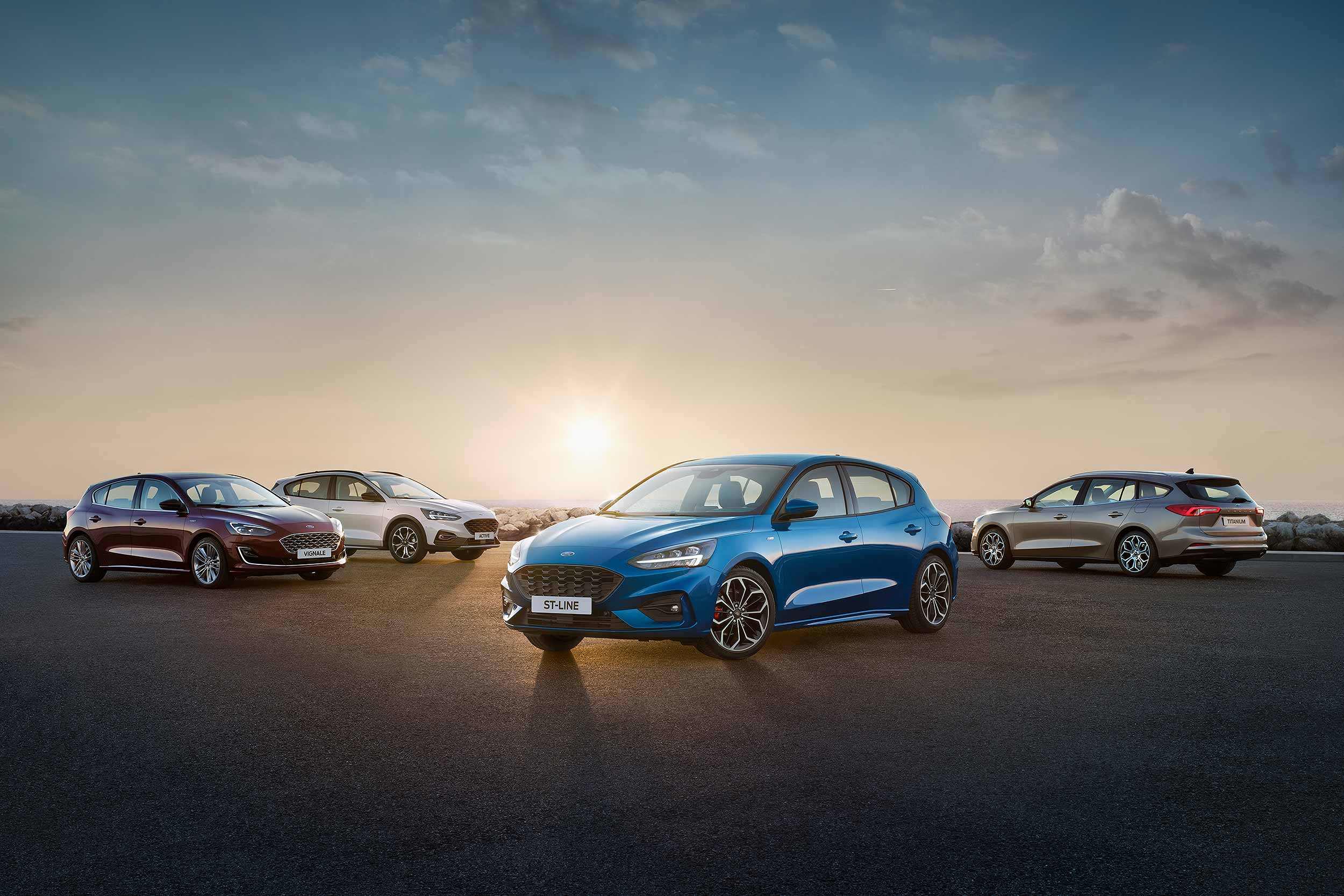 There are four different types of Ford Focus at launch – regular series models (including Style, Zetec and Titanium), the ST-Line, plus new Vignale and Focus Active variants. What marks out the latter three from regular models? The following features: 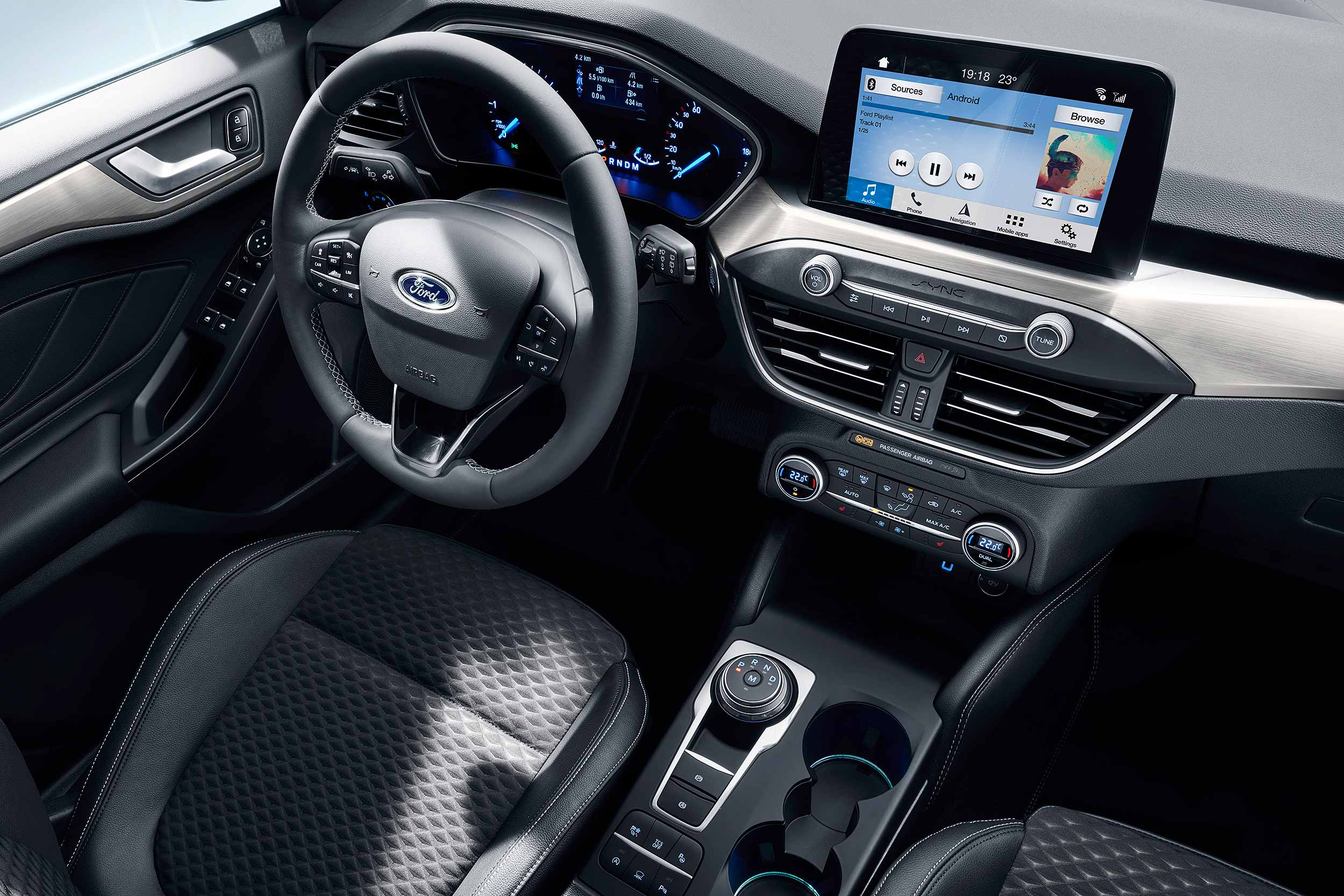 To measure up to cars such as the Volkswagen Golf, Ford has upped interior quality, and greatly simplified the layout. There’s a Fiesta-style floating central touchscreen, and optional new materials such as polished glass and brushed metal finishes. High-end and automatic models get an electronic parking brake to complete the clutter-free look.

Sync 3 infotainment offers Apple CarPlay and Android Auto compatibility via the 8-inch touchscreen: it’s standard on all but base Style models. For those who want to exploit its Spotify functionality, a new 675-watt B&O Play premium sound system plays through 10 speakers, including central mid-range speaker and a subwoofer in the boot.

The new Ford Focus is bigger inside. Knee room is up 50mm, there’s 60mm more shoulder room and details such as a flat floor and rear windows that stretch into the rear pillar enhance the spacious feel. An optional, openable, panoramic glass roof is available. 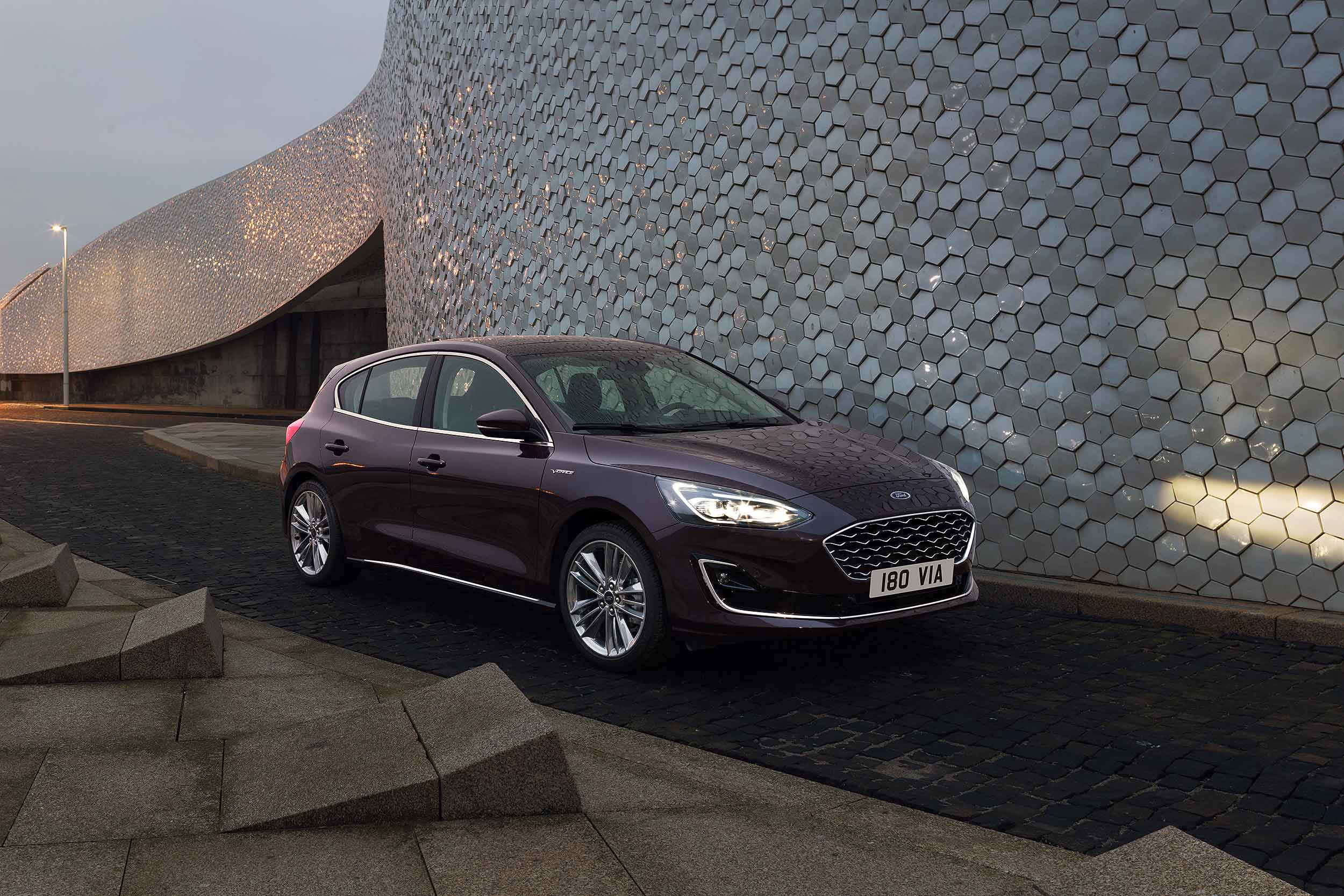 Engine choice in the 2018 Focus is either Ecoboost petrol (1.0 or 1.5) or Ecoblue diesel (1.5 or 2.0). Both petrol engines are three-cylinder units, and you can get both with cylinder deactivation that cuts a cylinder when demand is light. Ford says the cylinder cuts and reengages in 14 milliseconds, and there’s “no compromise in performance or refinement”. The 1.0-litre comes in 85hp, 100hp or 125hp guise; the 1.5-litre comes in 150hp or 182hp form.

Ecoblue diesels deliver CO2 from 91g/km for the 95hp 1.5-litre engine; it’s also offered in 120hp form. The 2.0-litre produces 150hp, and is expected to boast CO2 emissions from 110g/km. A six-speed manual is standard on all Focus; an eight-speed automatic is offered for the first time, complete with Jaguar Land Rover-style rotary gearshifter. 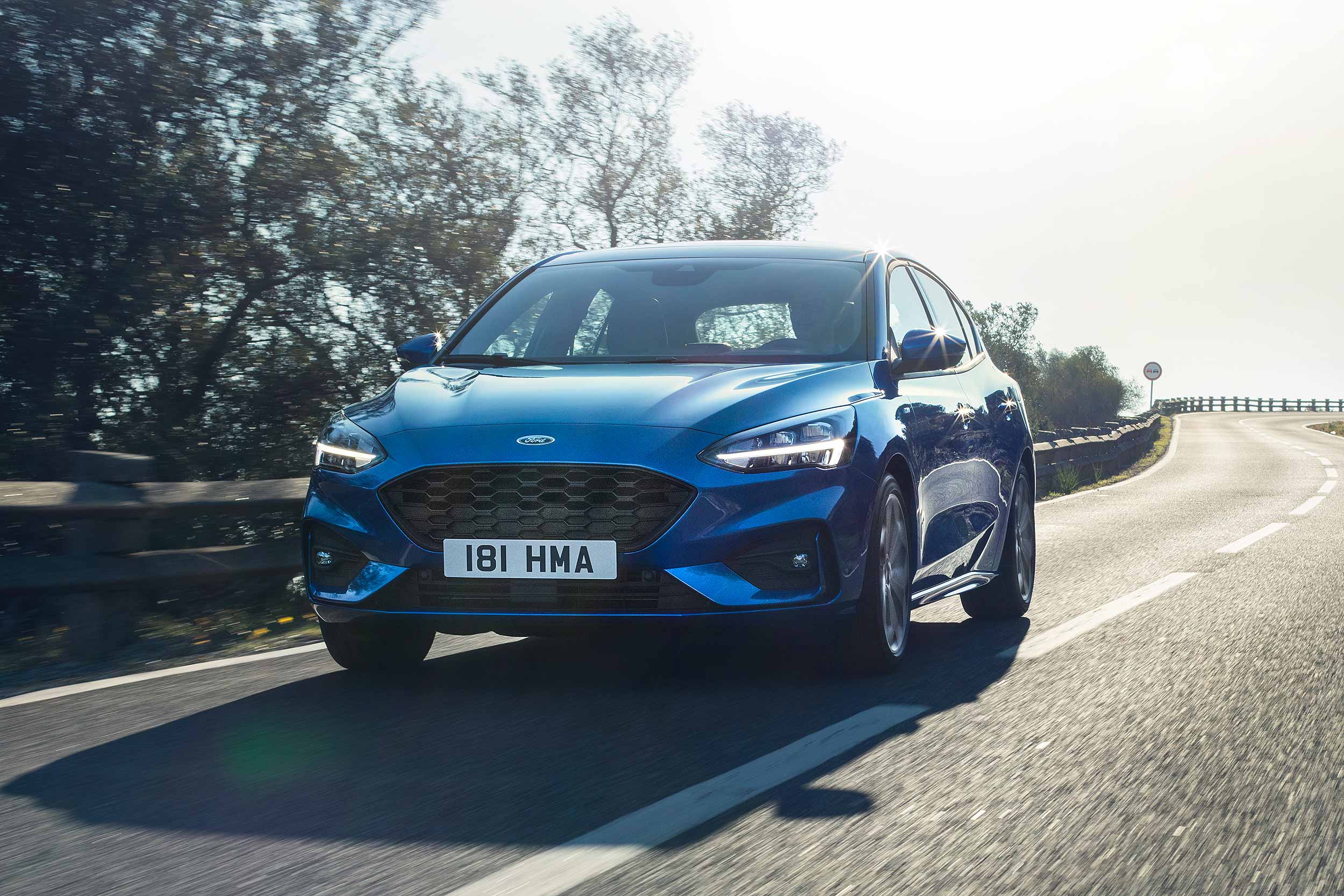 The big deal with the Ford Focus ever since it was launched back in 1998 is how it drives. This one is no exception. But there is a cutback for lower-power variants: for the first time since the Escort, a Ford Focus comes with ‘lightweight’ (read: cheaper) twist-beam rear suspension, instead of the better, pricier independent short long arm (SLA) system on other models.

It’s a system derived from the setup in the Fiesta, so it should be one of the better torsion beam setups (and its more compact design yields a bigger, wider boot), but those seeking the best new Focus experience may prefer to avoid the 1.0-litre Ecoboost and 1.5-litre Ecoblue engines it’s paired with.

Because the independent SLA setup is more sophisticate than ever. Ford’s fitted variable bushes, which have different stiffnesses in different directions – so they can be firm where they need to be and soft where they don’t. They separate the subframe from the body, for a smoother ride and less noise, vibration and harshness; Ford also fits clever springs that pre-load the rear suspension with vectoring forces – making the rear suspension crisper and more responsive.

For the first time, adaptive dampers are offered on a Focus. Continuously Controlled Damping, or CCD, can adjust every 2 milliseconds. It adds intelligence to the Focus’ well-developed core chassis: for example, it can detect the very edge of a pothole and firm up the damper, so the wheel doesn’t fall as far down into it, for less of a crash-bang. While simultaneously sending a signal to the rear wheel, so it can be primed for the pothole too. Ingenious.

Different driving models are offered on a Focus for the first time – Normal, Sport or Eco; CCD adds two more modes, Comfort and Eco-Comfort, which softens the suspension accordingly. Other details Ford’s proud of include a bodyshell that’s 20 percent stiffer, and individual suspension mounting points that are 50 percent stiffer.

Focus on the future 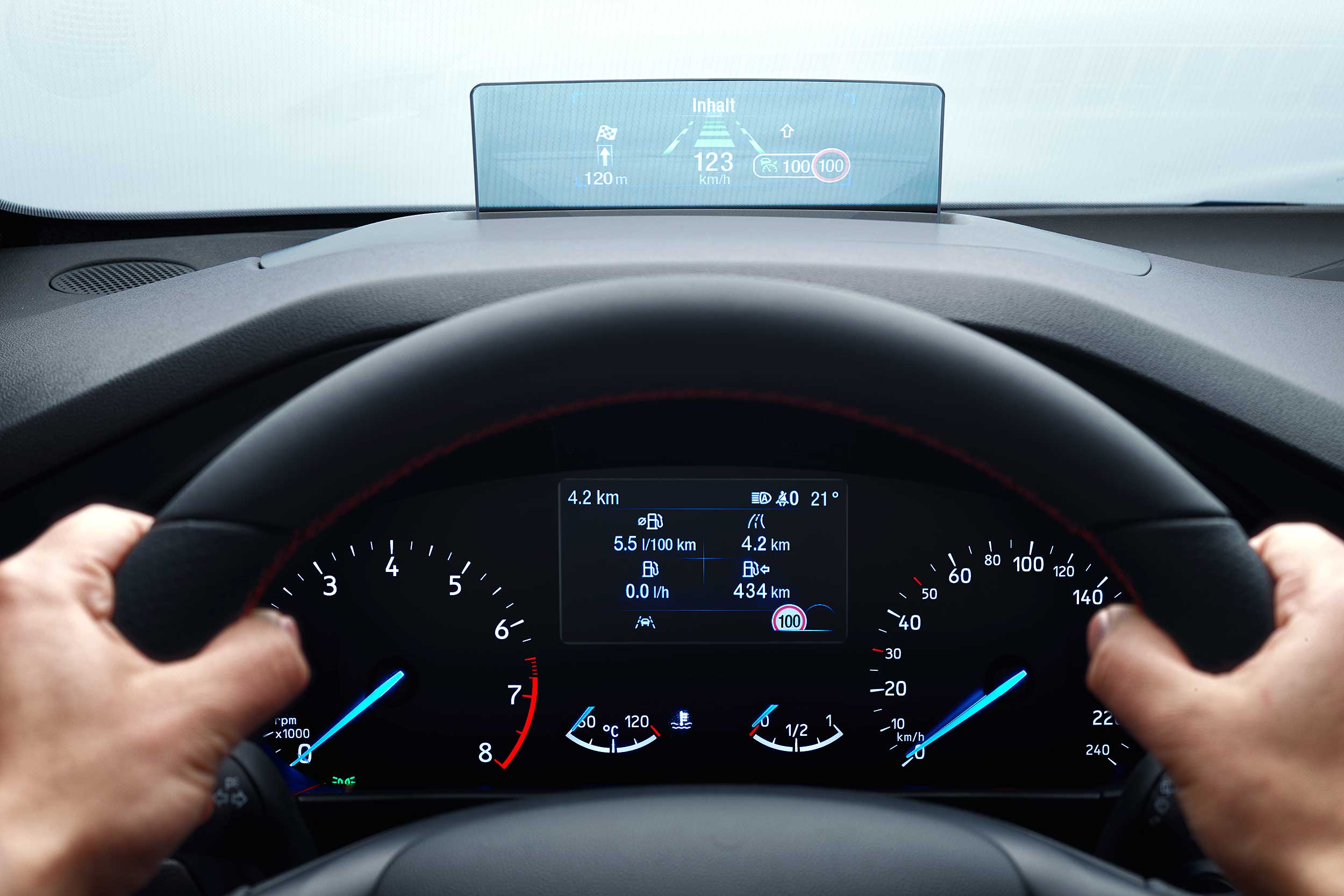 The new Focus brings head-up displays to the Ford range in Europe for the first time, while the latest generation of Active Park Assist 2 will now park it at the push of a button – handling all accelerator, brake and gear selection. Ford says the combination of autonomous technologies, under the banner Ford Co-Pilot360, “brings technologies synonymous with Level 2 automation to a family car”. Presumably the official Level 2 Focus will arrive later, to take on Nissan’s Level 2-compliant ProPilot system now offered in the Qashqai and Leaf. 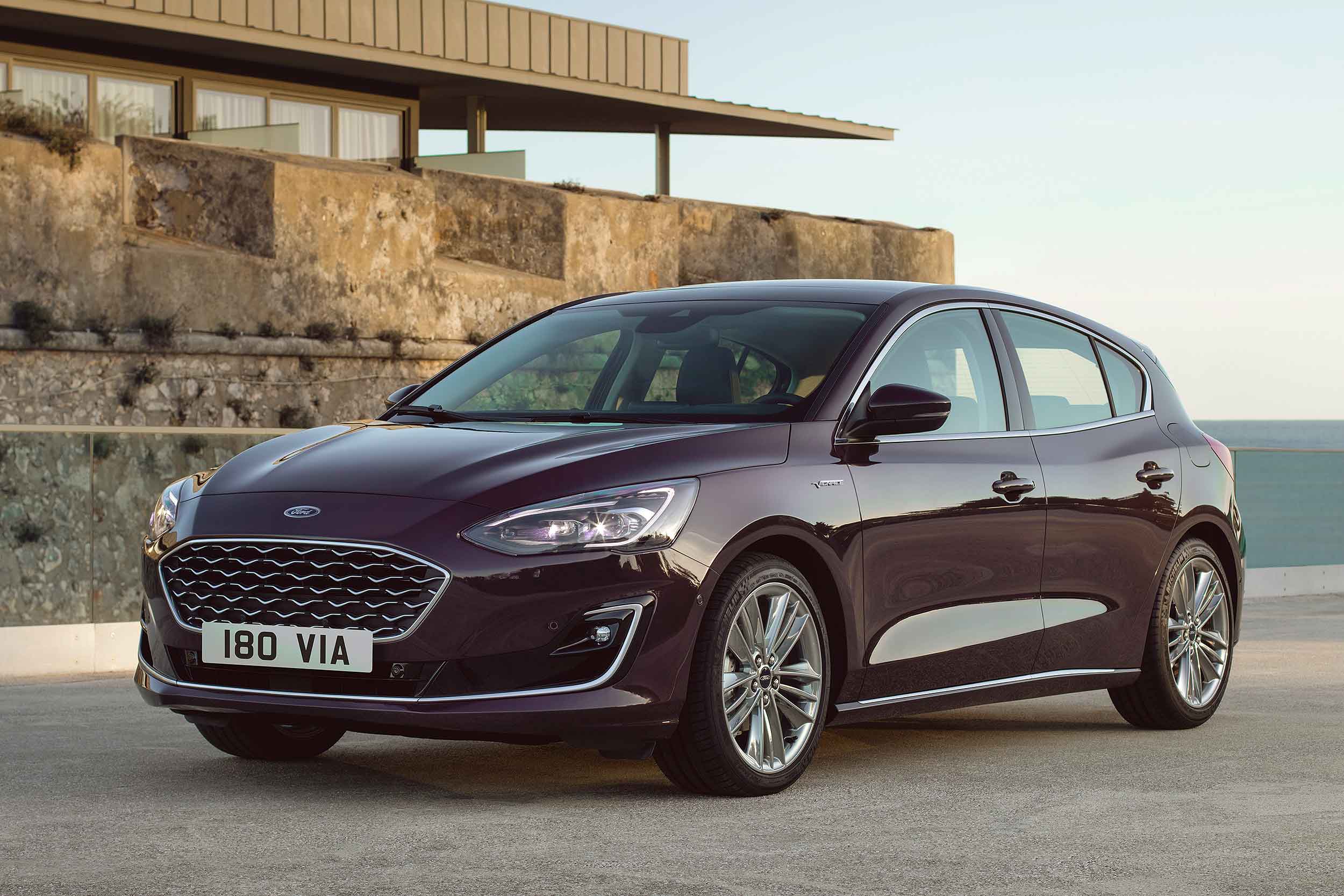 Ford has sold 16 million Focus since the model was launched in 1998, including 7 million in Europe. Almost 2 million have been sold in the UK, showing what a key market Britain is for the new family hatch. Perhaps this is why Ford chose to launch the fourth-generation car here, in London. Later this year, we’ll find out if UK buyers will reward this decision with sales volumes strong enough to topple the Volkswagen Golf as Britain’s favourite family hatch…