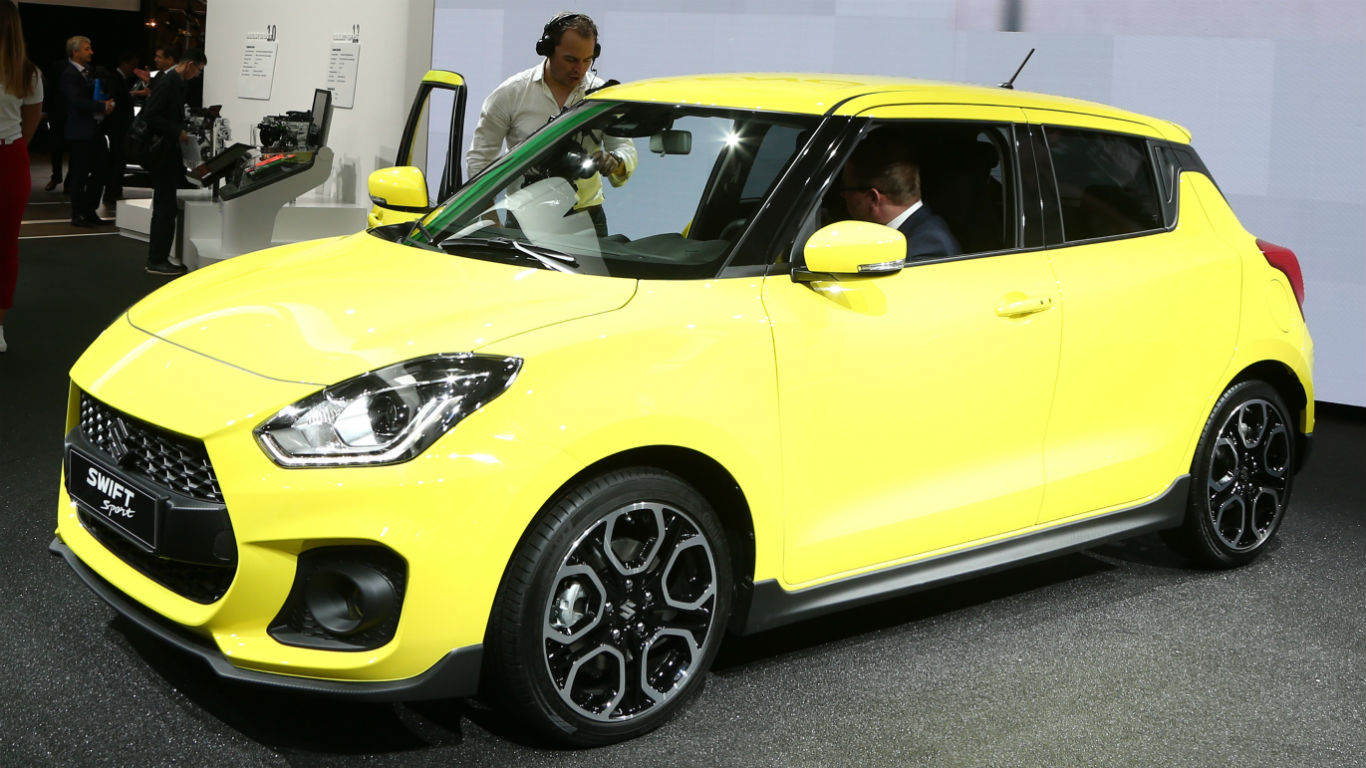 As day two of the Frankfurt Motor Show kicks off, join us for a moment of reflection as we look back over the highlights, lowlights, and biggest discussion points from the show floor. Is the Suzuki Swift Sport the car we want more than any other from Frankfurt? And was Greenpeace justified in protesting against all the petrol and diesel models being revealed? Join the discussion by commenting below.

Honda does ‘retro’ better than anyone else 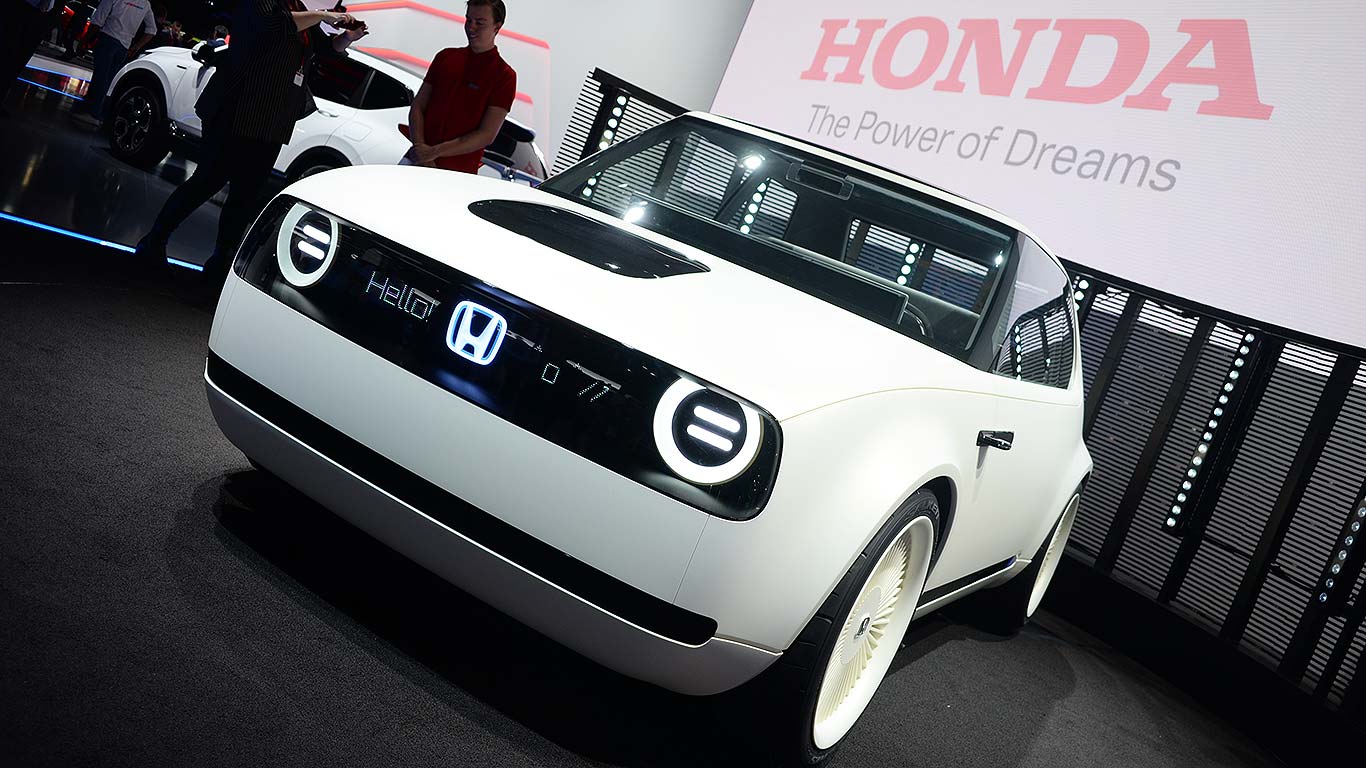 Watch out Fiat 500: Honda has revealed a retro remake of its original Civic and it really isn’t as sh*te as that sounds. The Urban EV Concept is an electric concept car that looks like a 2017 take on the Mk1 Civic, crossed with a 205 GTI and an element of Mk1 Golf thrown in for good measure. And, what’s more exciting, Honda bosses have hinted that it previews an actual new car, due out in 2019.

There are some cool features, such as a blue backlit Honda badge and interactive messages displayed where you’d find the grille on a conventional car. Of course, we’d like to know more about the important bits, though. Honda hasn’t mentioned the range or any performance figures, and there’s plenty of time to mess it up before the production model arrives in two years’ time. But, for many people, this is looking like the star of Frankfurt. 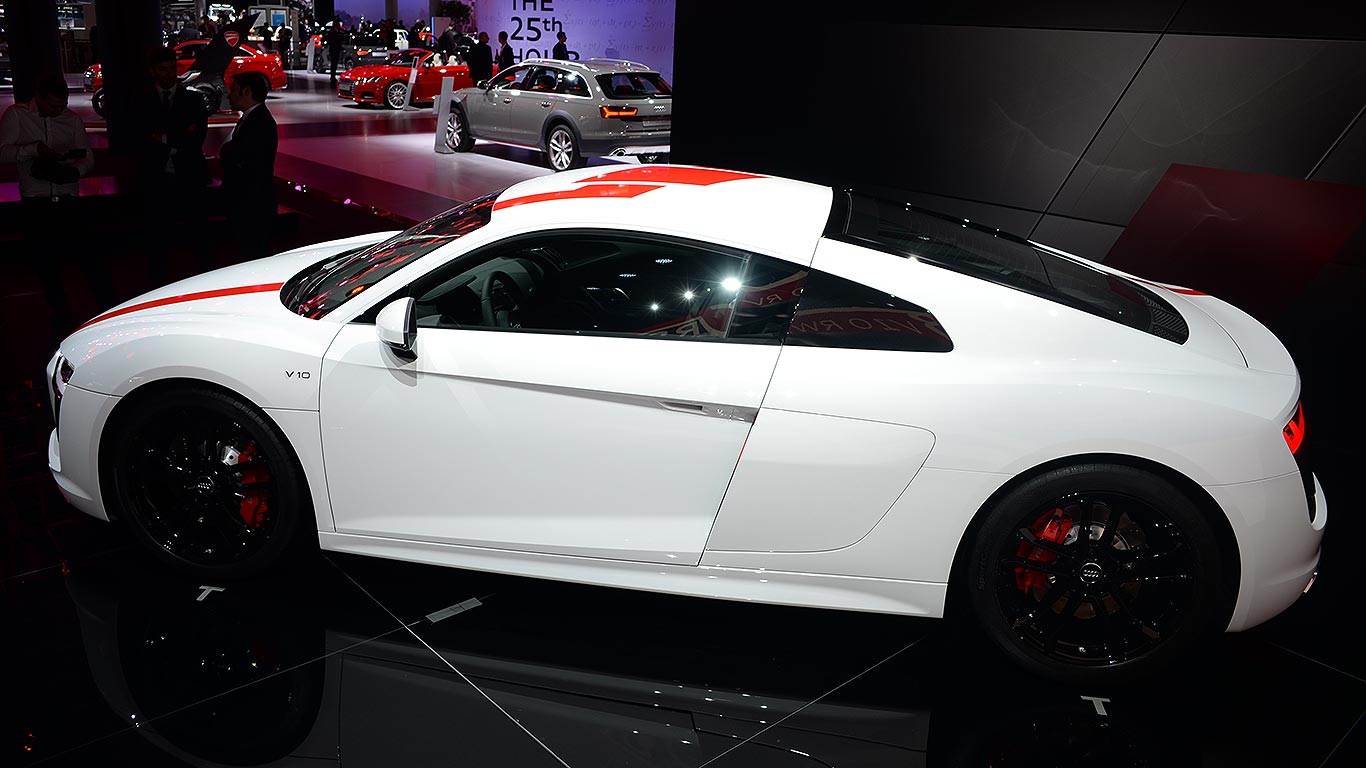 We reckon Audi Sport boss Stephan Winkelmann is a fan of skids. Not only did he change the sub-brand’s name from ‘Quattro’ soon after he arrived last year, it has subsequently revealed a rear-drive R8 at Frankfurt.

The R8 V10 RWS (Rear Wheel Series) is based on the regular R8 V10 in coupe or Spyder form. Only 999 will be built, with deliveries starting later this year and price tags of €140,000 and €153,000 respectively. UK prices are yet to be confirmed, but it’s expected a handful will make it across the channel.

While removing the propshaft and centre diff has been beneficial for the R8’s weight (down 50kg in the coupe and 40kg in the Spyder), a loss of traction has added a few tenths of a second to its 0-62mph times (3.7 seconds and 3.8 seconds). Not that anyone seems bothered: talk on the show floor suggests this is one of the highlights of Frankfurt.

Why is Greenpeace protesting when even the supercars are hybrids? 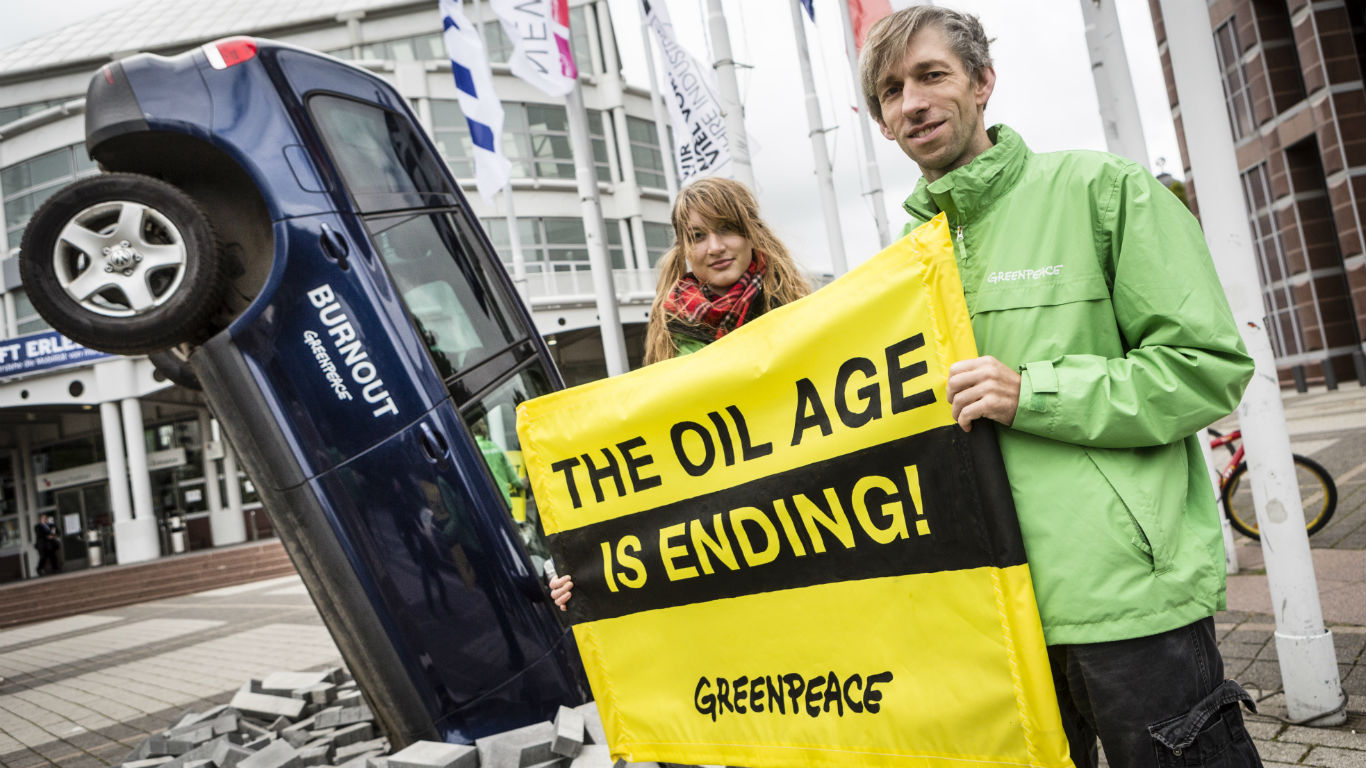 Visitors to the IAA may have been surprised to find Greenpeace supporters outside with a Volkswagen Touareg sticking into the ground and banners saying “the oil age is ending”. The environmentalist group is angry at carmakers for continuing to launch petrol and diesel cars at Frankfurt, signalling “the wrong direction that the industry is headed.”

Of course, they seem to have overlooked the plethora of electrified models making their debut at Frankfurt. Or maybe Greenpeace just doesn’t enjoy skids as much as Mr Winkelmann.

Ford makes the Ecosport even uglier 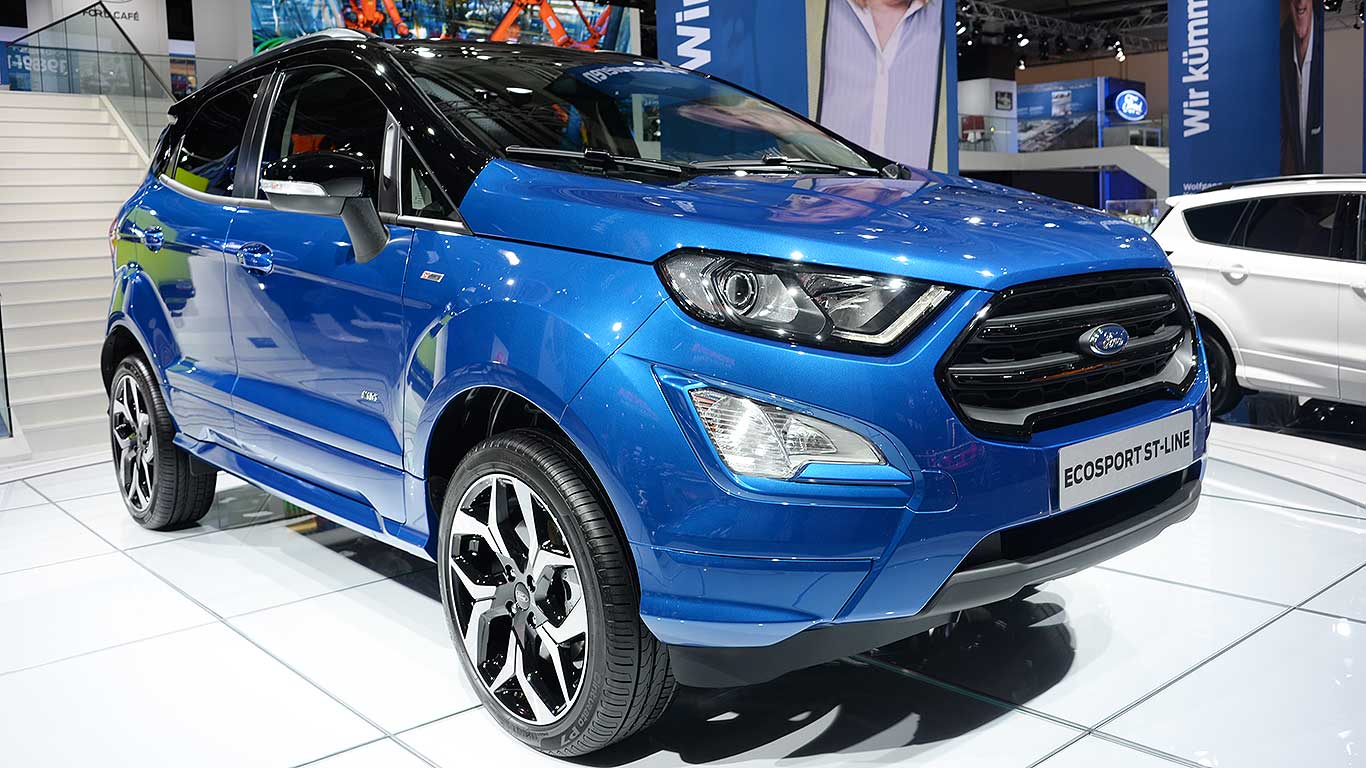 Developed in South America and brought to Europe under the ‘One Ford’ philosophy, the Ecosport has always lagged behind the likes of the Nissan Juke and Renault Captur in the UK. From the off, its stunted looks, cheap interior and below-par driving experience held it back. It’s had no shortage of tweaks, however – as one Twitter user put it, “that thing’s had more facelifts than the population of Beverly Hills.”

It’s been revised again for Frankfurt 2017 and, well, look at it. It’s never been an attractive car but, on appearance alone, we’d suggest it’s still a long way off troubling the Nissan Juke for UK sales. “Wait until you have driven it,” a Ford spokesperson optimistically told us. We can’t wait. 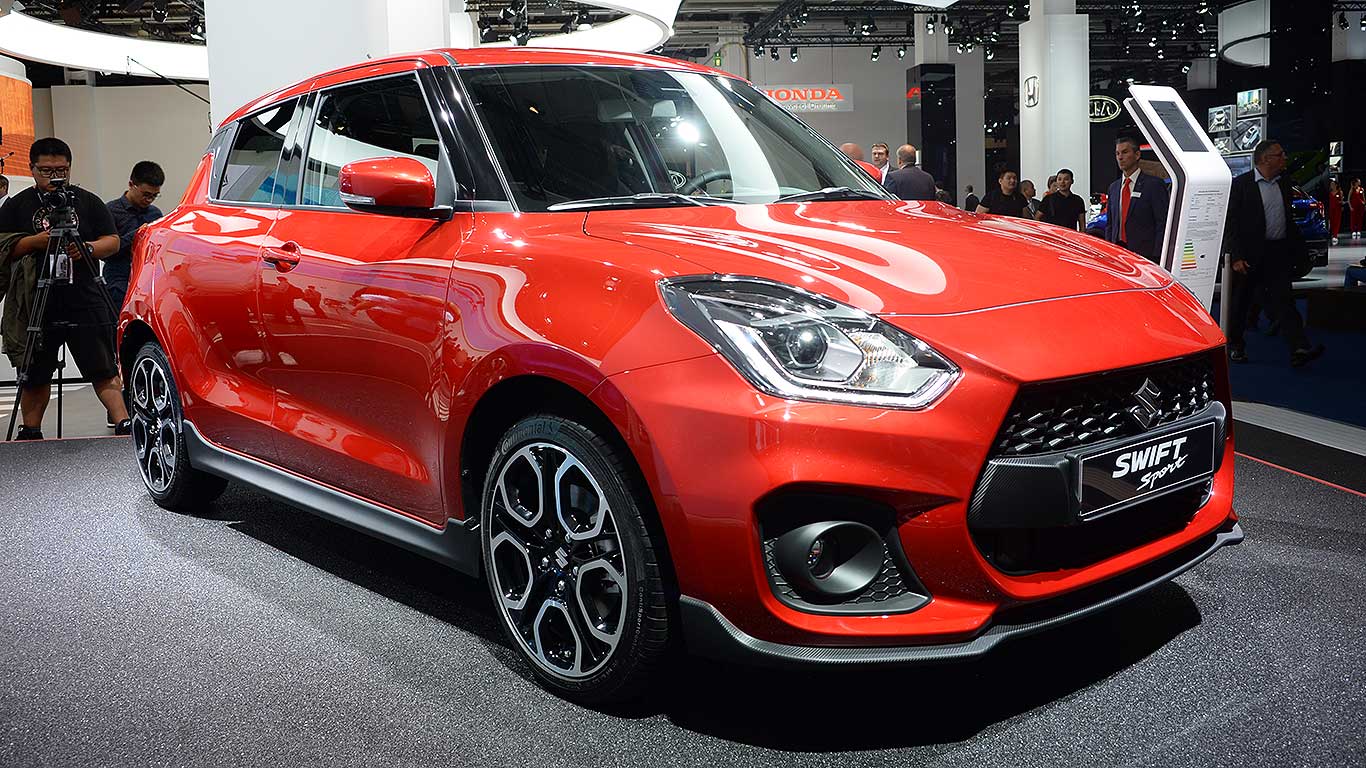 Suzuki’s Swift Sport has always been one of the purest hot hatches on sale. We say ‘hot’… in fact, ‘warm’ would be more appropriate, as outright power and performance have never been what the Swift Sport’s about. It would have been all too easy for Suzuki to go chasing after the Fiesta ST with a moderate power increase for the new Swift Sport, but it appears to have resisted.

While its high-revving naturally-aspirated 1.6-litre engine has been replaced by a 1.4-litre turbo (boo!), power has been increased to 138hp – up by just 2hp over its predecessor (136hp). It’s slightly bigger than its predecessor, unfortunately, but not massively so – and it’s actually 80kg lighter than before, bringing it below a tonne.

Land Rover makes the Discovery more like a Defender 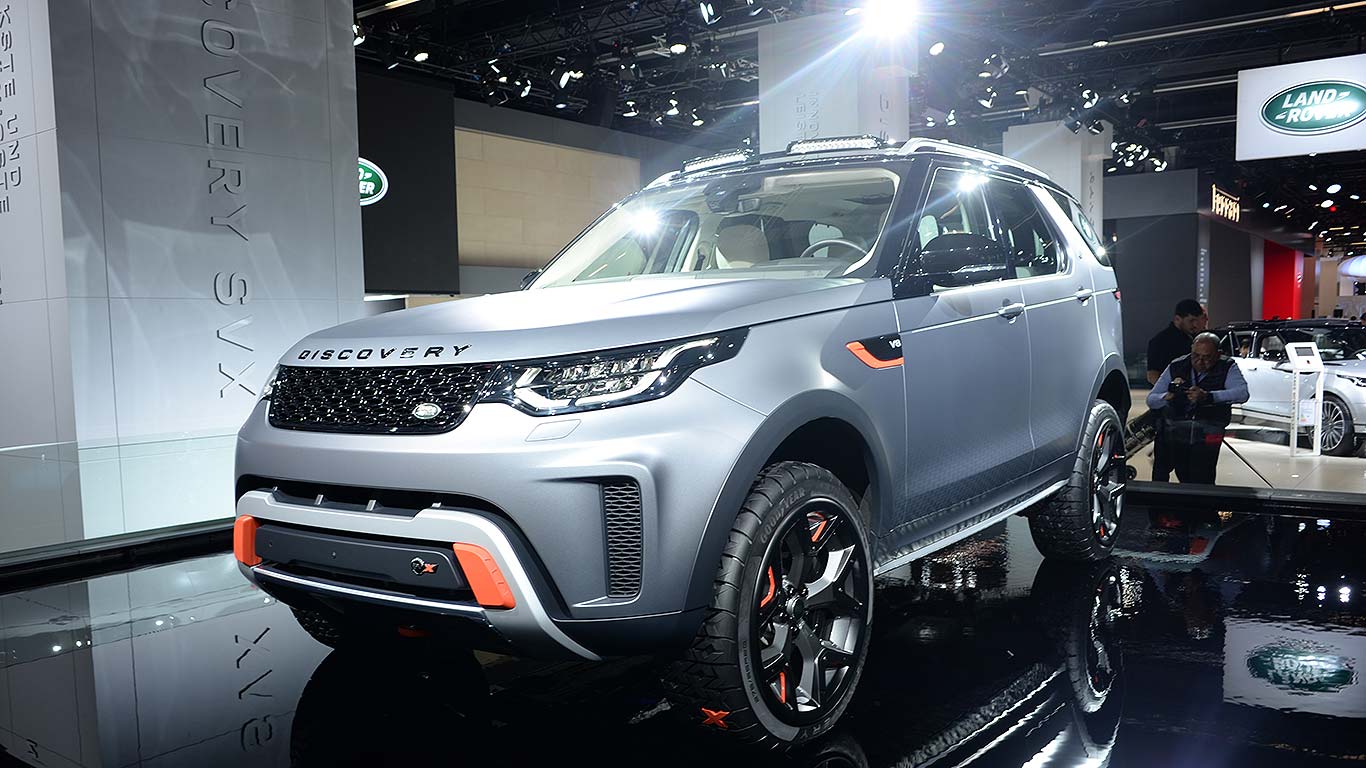 Nope, Land Rover hasn’t revealed a new Defender at Frankfurt. But, in a bid to prevent its stand looking like the double yellows outside a Kensington school at 3.15pm, the firm’s Special Vehicle Operations division has been working on something special. It’s the Land Rover Discovery SVX, with increased ride height, all-terrain tyres and two electronic locking differentials to make it invincible off-road.

Things are also a bit special under the bonnet. JLR’s squeezed its 5.0-litre supercharged V8 engine into the Discovery’s engine bay, producing a whopping 525hp and 461lb ft of torque. Performance figures haven’t been discussed, but it does seem to conflict with the off-road focussed rubber fitted to the forged aluminium alloy wheels.

Production of the Discovery SVX will start at the SVO’s technical centre in Coventry early in 2018. If you want to get your hands on one, rumours suggest you may need close to £100,000. 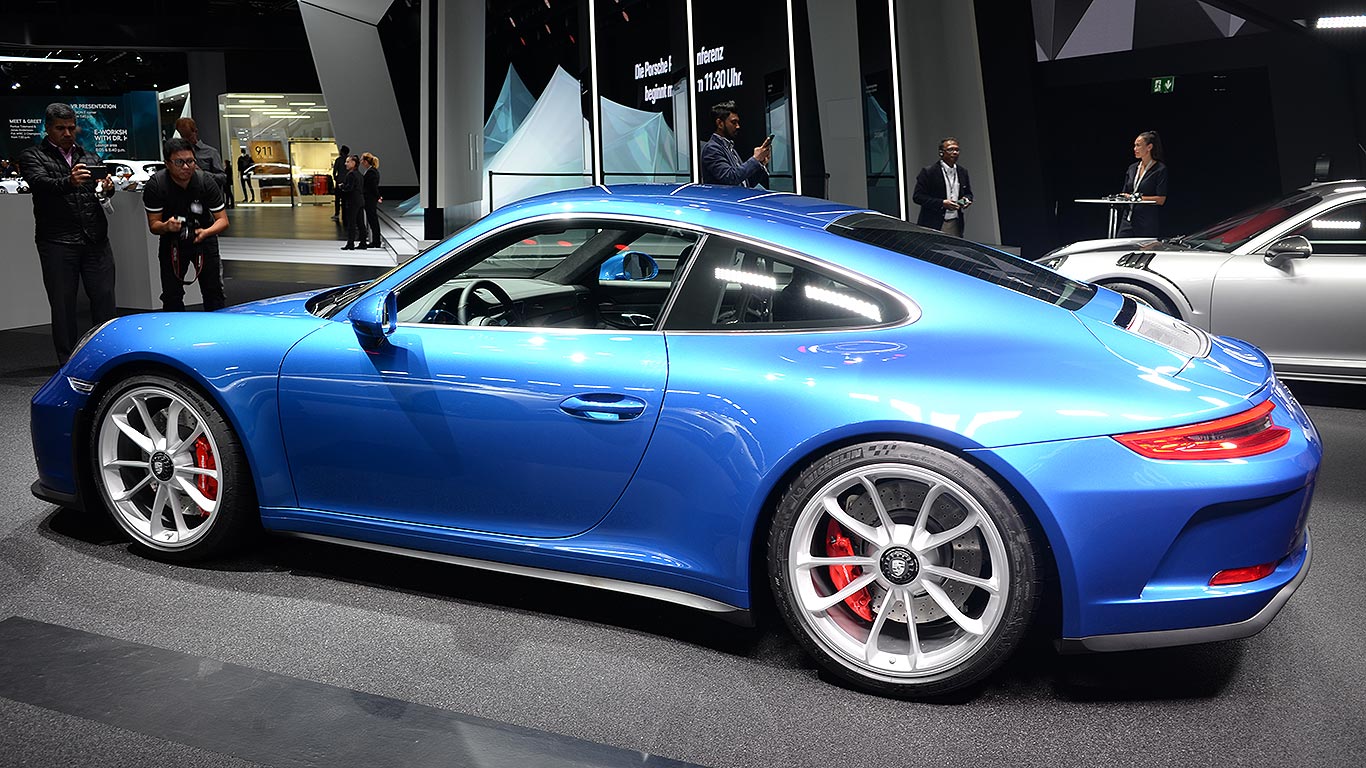 To many, last year’s Porsche 911 R was the ultimate 911. Based on the GT3, with the engine from the GT3 RS and no unsightly rear wing, all 991 911 Rs soon sold out despite their £137,000 price tag – with some specialist dealers suggesting that buyers were happy to pay close to £1 million to get their hands on an example.

Anyone who has paid a fortune for a 911 R might be a tad annoyed, however, as Porsche has just revealed the  very similar 911 GT3 with Touring Package (let’s call it the GT3 Touring). It has the same 4.0-litre naturally-aspirated engine as the GT3, but gone are garish styling features – including the rear wing. And, the best thing about it is the price: it’ll set you back £111,802. That’s the same as a standard GT3.

Mercedes-AMG manages to make even a 1,000hp supercar look bland 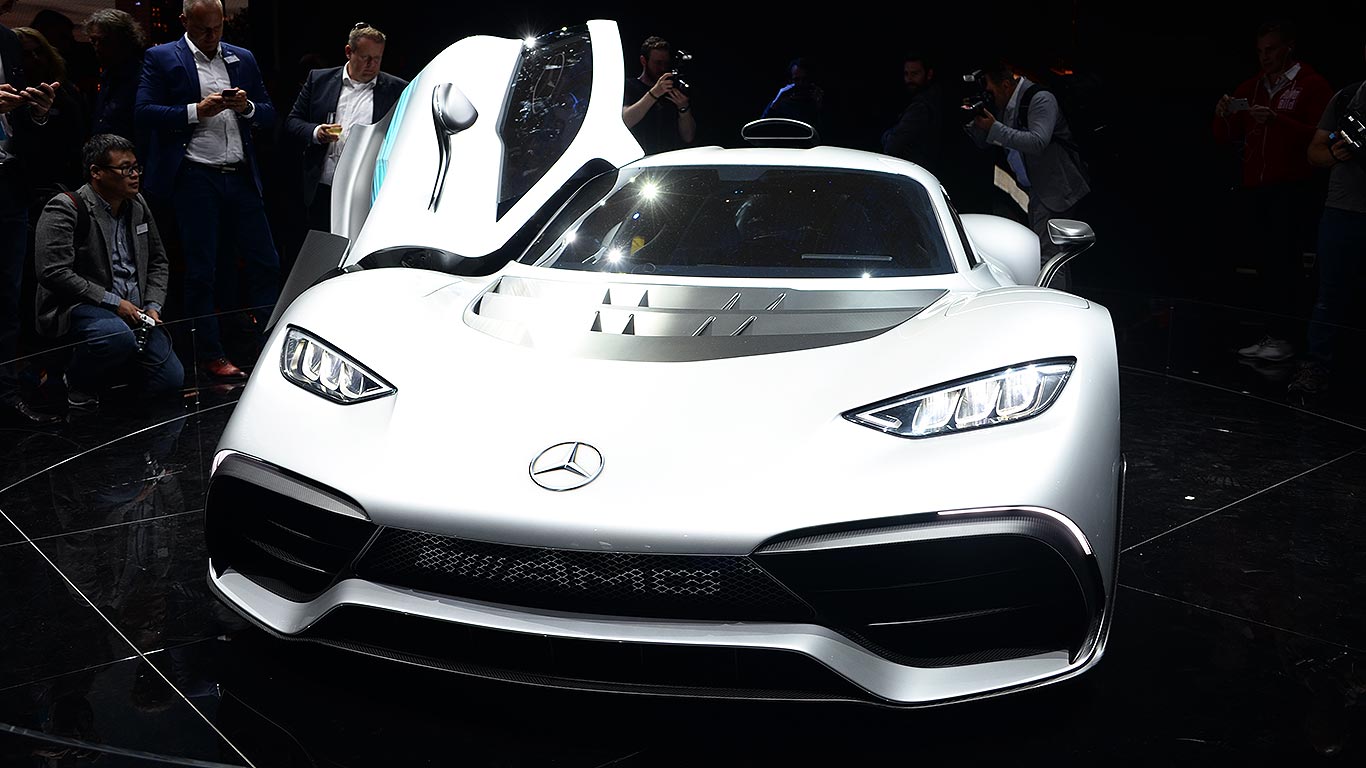 This is the Mercedes-AMG Project One. It’s powered by the same turbocharged 1.6-litre V6 engine as the manufacturer’s F1 car, able to rev to 11,000rpm and, combined with no fewer than four electric motors, exceed 1,000hp. As a result it’ll hit 124mph in less than 6.0 seconds – faster than a Bugatti Chiron.

It all sounds very exciting, doesn’t it? But, well, look at it. It’s just not as dramatic as you’d hope for a Bugatti Chiron-beating hypercar. It looks a bit like the Saleen S7 off the 90s, with a dose of McLaren F1 thrown in. And that’s being kind. Yawn.

Is the BMW X7 the ghastliest car of Frankfurt? 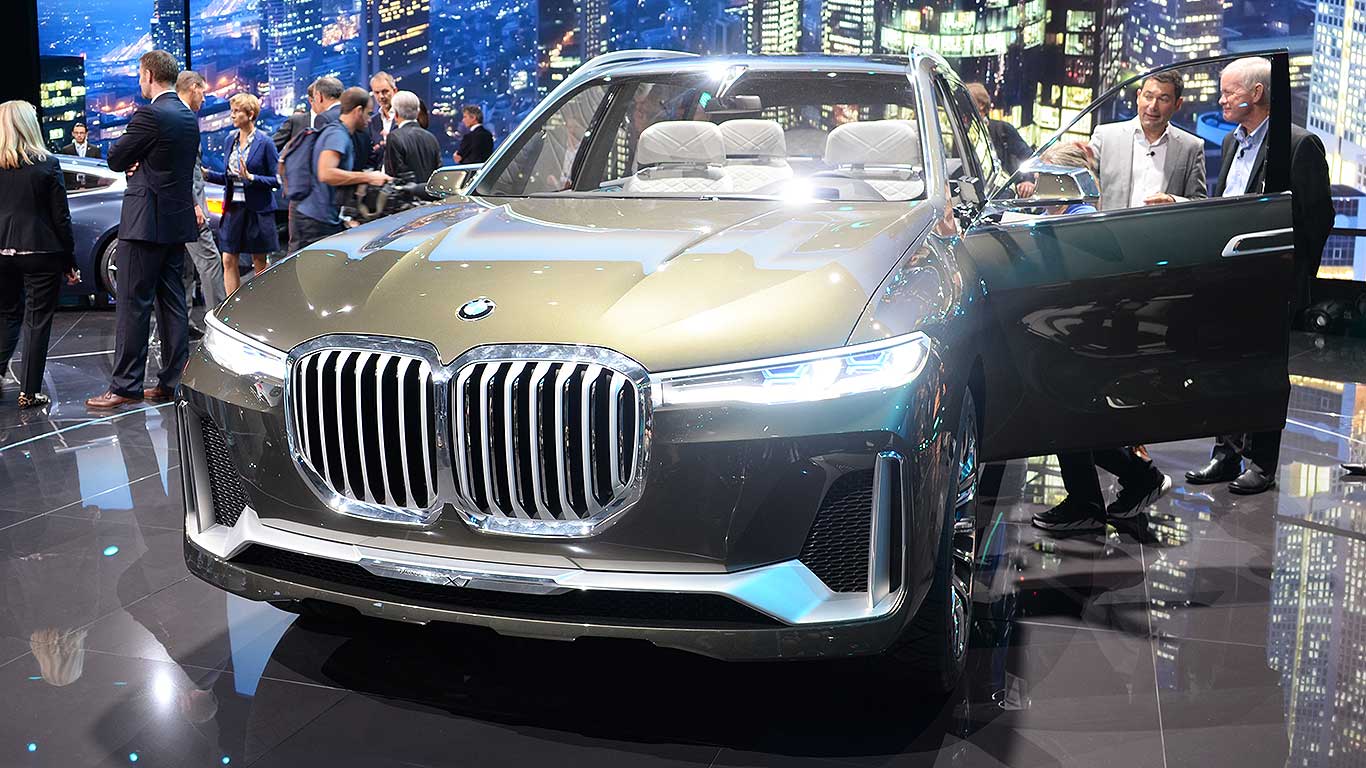 It’d be easy to mistake the BMW X7 for one of the modified monstrosities that usually fill the tuner halls at motor shows. Sharing a platform with the 7 Series, the Range Rover rival has an unmissable kidney grille and masses of chrome. It really is quite something. Oh, and it’s massive.

We can see two positives about the BMW X7. Firstly, you can’t see the exterior when you’re inside it, and the interior is actually rather lovely. There’s lots of space, obviously, along with crystal glass switches and numerous touchscreen monitors. The second bit of good news it that it’s just a concept, for now, and the production version is expected to be heavily toned down when it arrives next year. Phew. 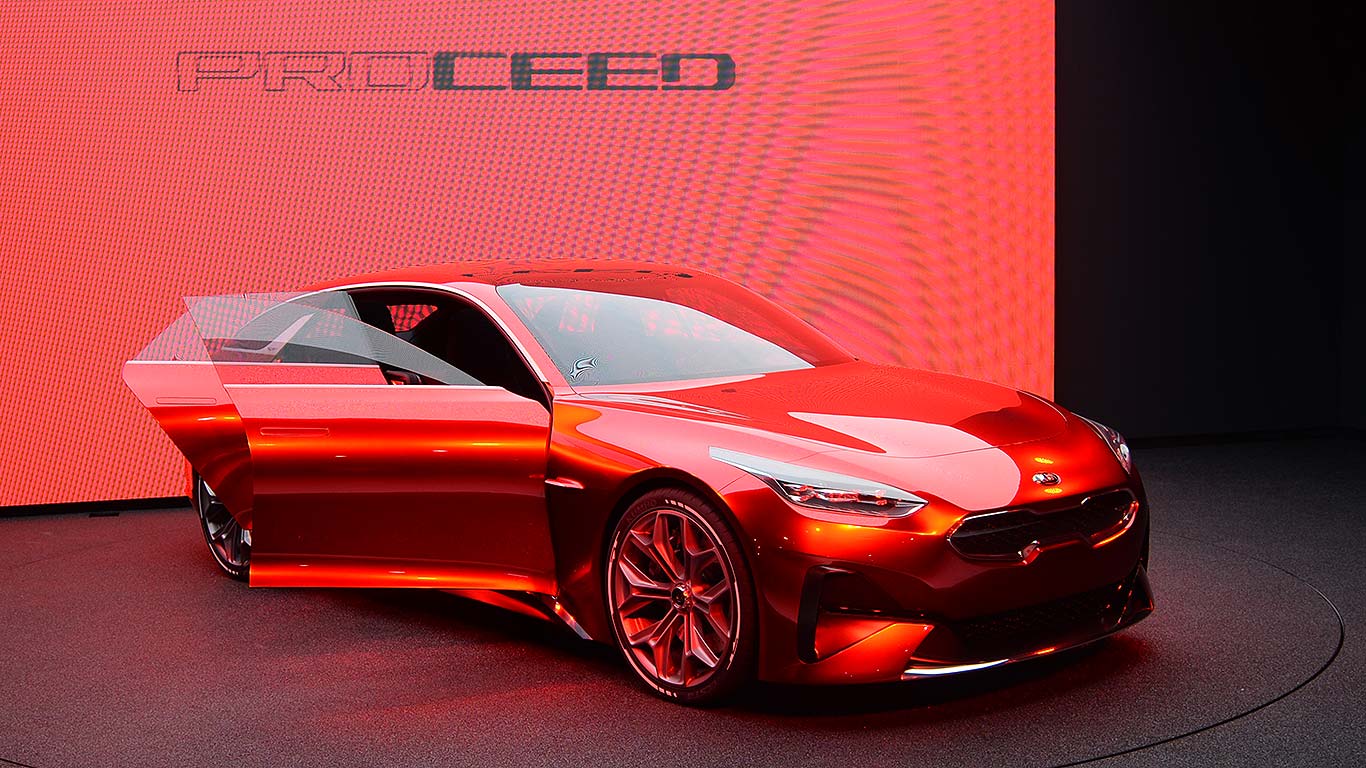 “If Kia makes this, everyone else selling cars in the C-segment might as well give up now,” said one Twitter user about the Proceed shooting brake. We can’t disagree, really. As attractive as the BMW X7 is ugly, the Proceed concept previews the next-generation Kia Cee’d. Although we call it a shooting brake, Kia calls it an ‘extended hatch’ and has hinted that it could preview a new bodystyle for the Cee’d when it arrives.

Naturally, we doubt the 20-inch alloys or hand-finished ‘rippled black fabric’ interior will make it into production. If the car that arrives at dealers looks anything like the Proceed concept, though, it’s going to be the most attractive Ford Focus rival on the market.