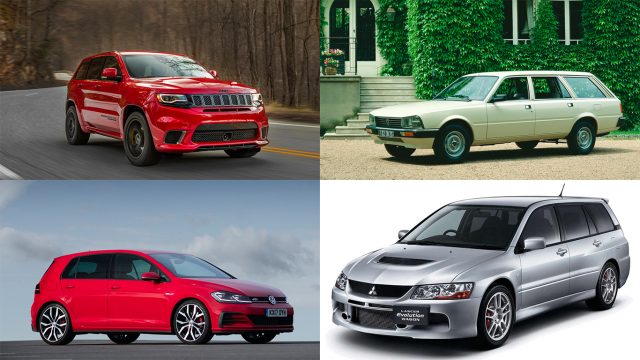 Being practical doesn’t necessarily mean having to give up your street cred. When the time comes to transport a growing family, there are ways and means to resist the slide into blandness. These 20 cars prove that you can achieve domestic bliss, yet still gain envious glances in the supermarket car park. 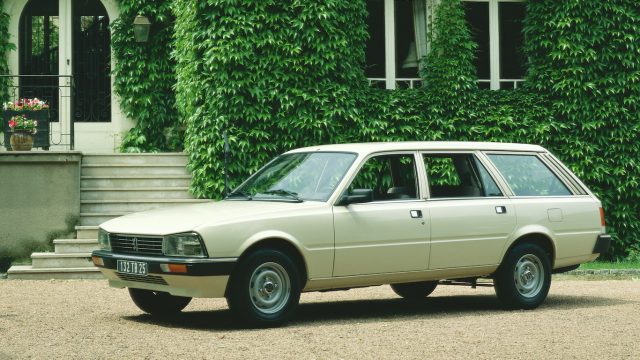 Notable for being Peugeot’s last rear-wheel-drive production car, the 505 was produced in various forms between 1978 and 1999. With more than 1.3 million sold, it must have done something right, but the version we’re interested in is the ‘Familiale’. Introduced at the 1982 Geneva Motor Show, this estate offered seating for up to eight thanks to a folding third-row bench. Oh, and the styling was a collaboration with Pininfarina, which clearly ratchets up the cool points. 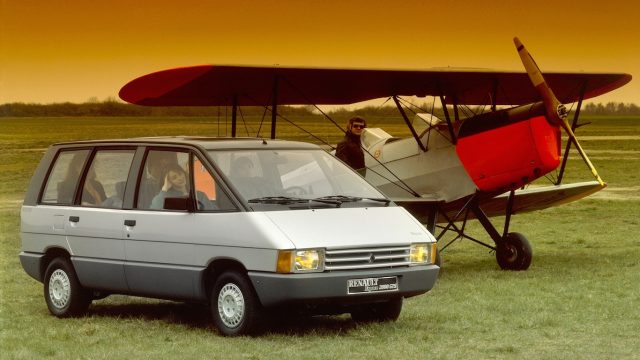 Often cited as being the first real MPV, the original Espace landed in 1984 after a lengthy and tumultuous gestation period. Designed by Chrysler UK to replace the uncool Talbot Rancho, it then ended up in the hands of PSA Peugeot Citroen. Finally, via Matra, the Espace went on sale badged as a Renault. Its fibreglass body was novel, but customers took time to warm to the radical styling. Today, if you can find one, it would make a suitably leftfield family transporter. 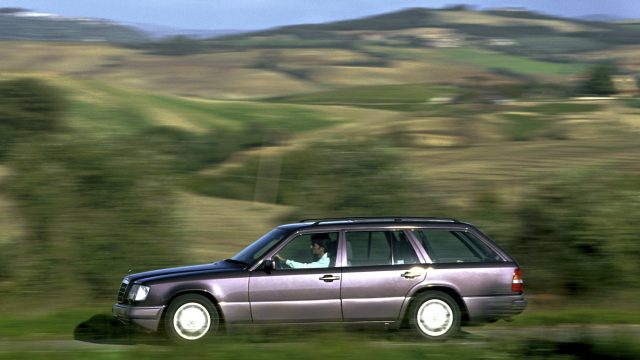 Get ready to tick off the typical Mercedes-Benz list of clichés with the W124 E-Class. Yes, this estate is from the time when Mercedes models were associated with ‘vault-like’ build quality and ‘bulletproof’ reliability. Most significant was the option of seven seats, courtesy of a rear-facing third row that folded flat into the boot floor. This combination of space, plus the ability to rack up galactic mileage, means the W124 wagon still commands strong prices. 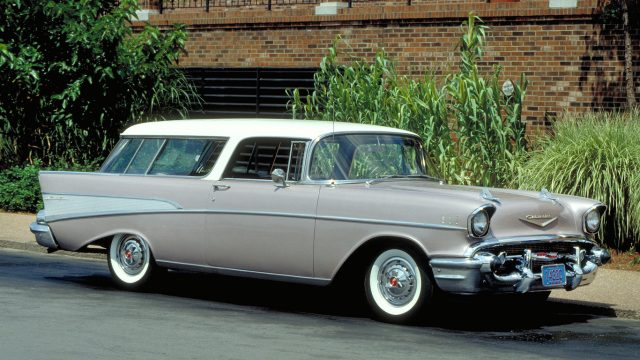 Proving that family transportation was cool more than six decades ago, the Nomad was related to the iconic Chevy Bel Air. Featuring a two-door shooting brake design with a split two-piece tailgate, the Nomad offered practicality and good looks. For 1957, it gained the option of the wondrously named ‘Super Turbo Fire V8’ with 283hp from this cutting-edge fuel-injected engine. Only sold for three years, you’ll need at least $45,000 (£35,000) to rock this retro-cool look. 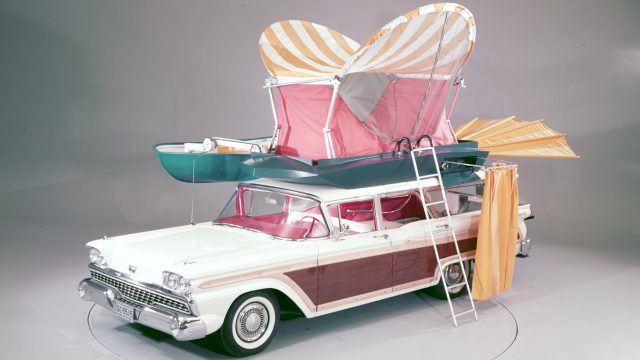 Proving that car manufacturers were doing ‘lifestyle’ photoshoots long before the Lycra-clad 1990s, it’s the 1959 Ford Country Squire. This particular car featured push-button lifestyle accessories, with a roof-mounted boat that flipped over to reveal a tent beneath. There was even an electric fridge in the boot. The Country Squire soldiered on as part of the Ford range until 1990 when America fell out of love with the station wagon. In case you’re wondering, the woodgrain trim was fake – and had been since 1953. 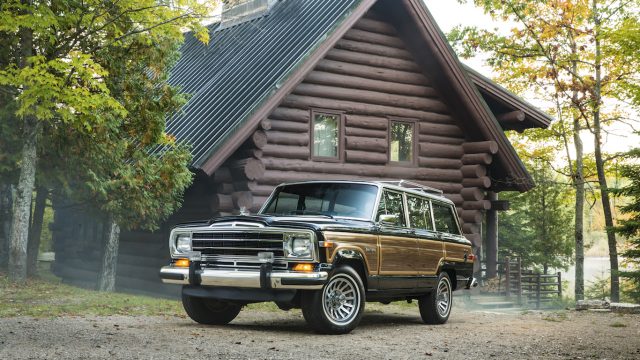 Another car guilty of the fake veneer treatment was one that can legitimately claim to be the first premium SUV. Introduced in 1963 by the Kaiser Jeep Corporation, the Wagoneer had an upmarket interior that set it apart from other 4×4 models at the time. By 1991, and under the control of Chrysler, the last few Grand Wagoneers were even more luxurious and better equipped. Accordingly, they attract premium prices from collectors. 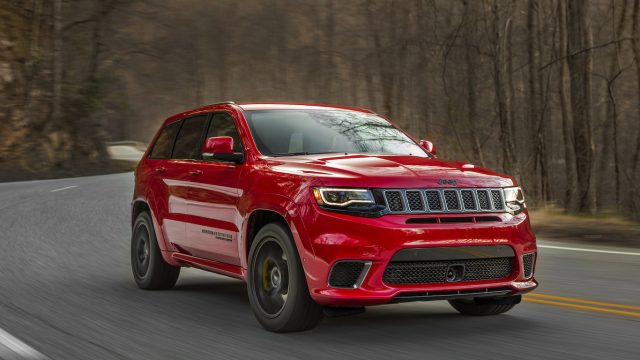 Jeep hasn’t forgotten how to produce cool family machines since the Wagoneer, although the brand-new Trackhawk is desirable for slightly different reasons. Taking the 707hp 6.2-litre supercharged V8 engine from the Dodge Challenger Hellcat and mating it to a 4WD system means 0-60mph in 3.5 seconds. Top speed is an equally ridiculous 180mph.Plus, you can set the suspension and gearbox to ‘Track mode’ should you want to get impress at the race circuit. Sick bags don’t appear on the options list, but at least the leather upholstery will be wipe-clean. 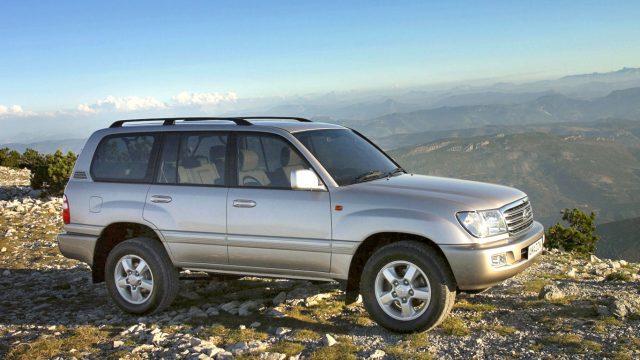 Cool doesn’t necessarily mean fast or stylish. In fact, for family transport, automotive chic can be as simple as dependability in the most extreme situations. With a lineage that stretches back to 1951, the Land Cruiser has built a reputation for reliability and trustworthiness. Just ask Land Rover what it did for their export sales in places like Australia. The J100 Amazon, introduced in 1998, could be had with a 4.7-litre V8 engine, and offers a sense of quiet confidence when tackling the school run. 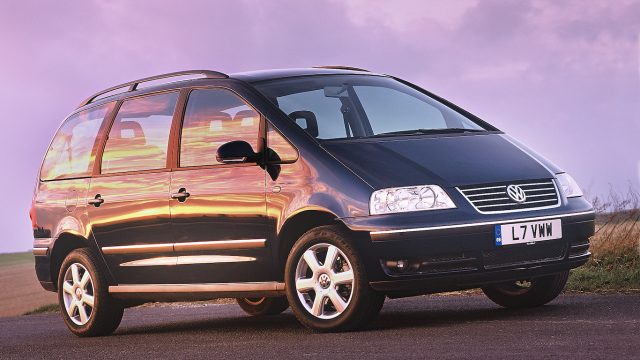 Much like this decade has been defined by the SUV, the 1990s were the era of the MPV. Offerings like the Sharan – and its Ford Galaxy/SEAT Alhambra sisters – were the answer to almost every family problem. Even the need to drive a seven-seater MPV, with a 2.8-litre 201hp narrow-angle V6 engine, was covered. Picking the VR6 still only meant 0-60mph in 10.6 seconds, but fuel economy dropped to a faintly ridiculous 22mpg. A small price to pay for transporting your kids with a six-cylinder soundtrack? 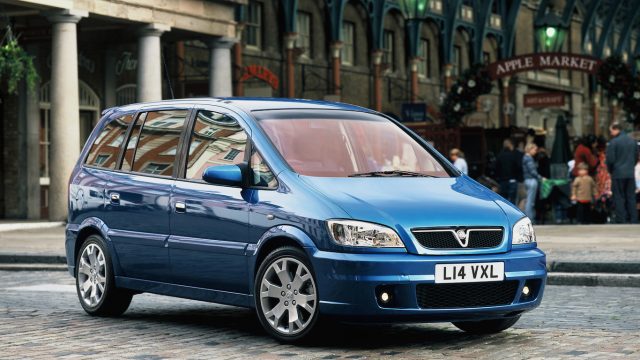 The first-generation Zafira suffers from something of an image problem, perhaps not helped by Vauxhall’s TV adverts with Griff Rhys Jones. But in 2001, Vauxhall launched the sporty GSi version, with a 189hp turbocharged 2.0-litre engine from the Astra. A 0-60mph sprint of 7.5 seconds, combined with relatively subtle styling, make this something of a Q-car. If you can cope with the badge snobbery… 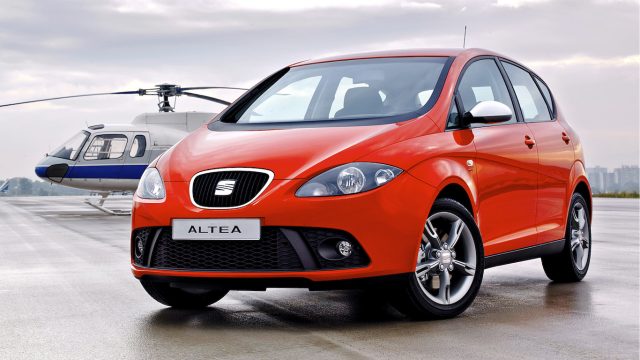 Rarer and even more random than the Zafira, the Altea FR TFSI offers a fleeting chance that buying a compact MPV doesn’t mean giving up completely. Not only does it feature styling by Walter de Silva – he of Alfa Romeo 156 fame – but the FR had the option of a 197hp 2.0-litre TFSI engine. That’s the very same engine that powered the Mk5 Golf GTI, to much acclaim from journalists and enthusiasts alike. FR spec also means sports suspension, meaning this Altea handles better than you might imagine. 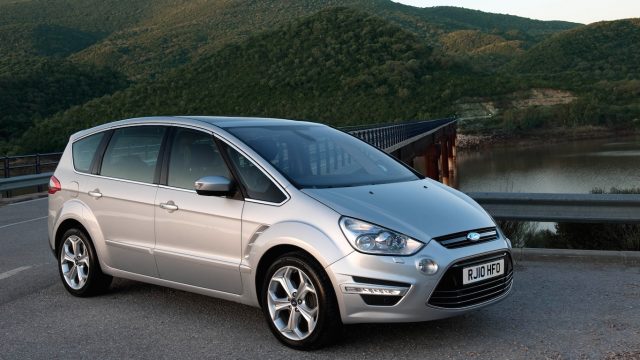 However, the title of ultimate performance MPV must go to the original Ford S-Max. Using the 2.5-litre five-cylinder engine from the Focus ST, its 216hp output means 0-60mph in 7.4 seconds and top speed of 143mph. Add a five-cylinder warble, seven seats and impressive handling, and the S-Max becomes quite a desirable package. It also proved popular with numerous police forces, adding an extra layer of coolness. 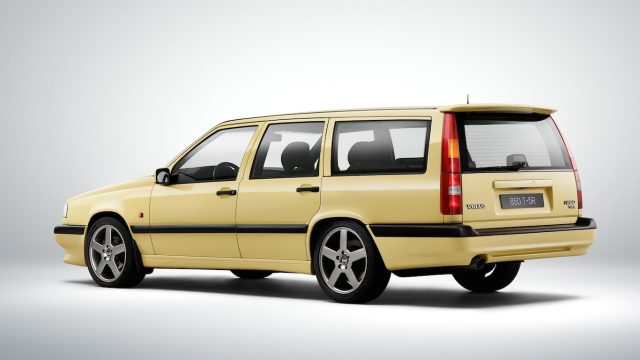 Also beloved of the constabulary, the 850 T-5R was a worrying presence in the rear-view mirror of many motorway drivers. Created as Volvo went through a period of reinvention, the T-5R was a limited edition that used a 245hp 2.3-litre turbocharged engine. Although offered in estate and saloon body styles, the wagon was infinitely cooler – not least because of the 850 estate campaigned in the British Touring Car Championship. 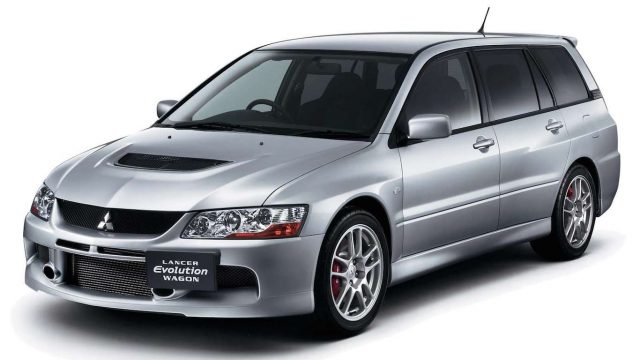 Not officially sold outside of Japan, and created in limited numbers, the Evo IX Wagon is an opportunity to transport your family in a unique machine. Only 2,500 were built, melding the Evo IX saloon chassis to bodywork from the regular Lancer estate, with extensive additional welding and strengthening. Power was unchanged at 276hp, as was the full-time 4WD system with active centre differential. Tracking down an import might not be easy, but will be worth it. 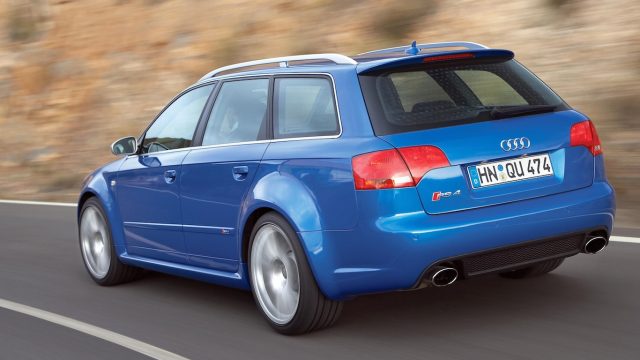 Flared wheelarches, Audi build quality and a 4.2-litre V8 engine that also saw service in the original R8 supercar. Not a bad place to start for a five-door estate, and such qualities made the RS4 a genuine challenger to the BMW M3. A rear-biased Quattro drivetrain offered slip and security in equal measure, while 0-62mph in 4.9 seconds is more than fast enough for a family wagon. 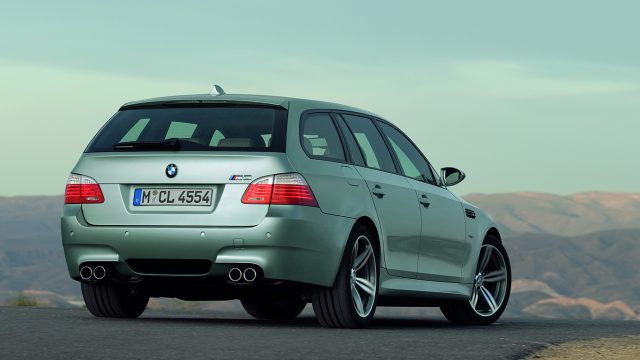 In the early 2000s, BMW established a reputation for building the most powerful V10 engines in Formula 1. Although they never took a World Championship against a dominant Ferrari team, BMW still won plaudits for its 10-cylinder powerplant. Seeking to capitalise on this, it equipped the E60 M5 with a 5.0-litre V10 producing 500hp. A semi-automatic gearbox allowed drivers to live out their inner Juan Pablo Montoya fantasies, with launch control offering lightning-fast getaways from a standing start. Today it looks almost subtle but, to those in the know, this is an achingly cool machine. 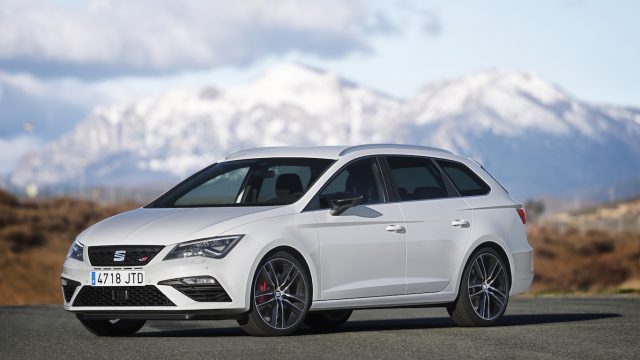 Despite the love for crossovers and SUVs, compact estate cars have seen a renaissance in recent years. The SEAT Leon ST has proven to be very popular, not least because of striking good looks, strong equipment levels and decent value. Top of the tree is the Cupra 300, which makes, as the name suggests, 300hp from its 2.0-litre turbo engine. Consider the Cupra 300 a cut-price version of the Golf R Estate and it makes a surprising amount of sense, with even the option of 4WD on the cards. 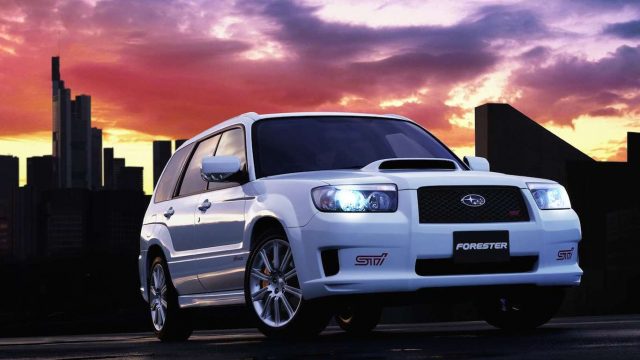 If 4WD really is a necessity for your family needs, how about another import-only Japanese creation? With the 2.5-litre flat-four boxer engine from the Impreza WRX STi, this second-generation Forester made 265hp. That’s good enough for 0-62mph in around 5.0 seconds, with Brembo brakes and tuned suspension to keep everything in check. Fuel economy might not be family-friendly, at 25mpg or less, but just remind yourself that you’re buying a practical estate with rally pedigree. 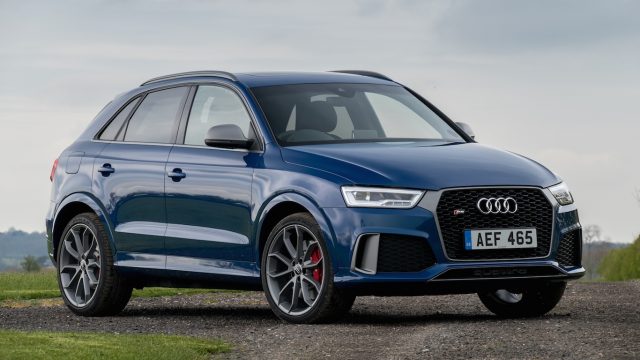 Should you want retro-rally ancestry in your family car, the RS Q3 could be the choice for you. The five-cylinder turbocharged engine sounds like those used in the wild Group B Quattro rally cars of the 1980s, even if the RS Q3 has to make to do with only 362hp. Performance specification brings cool-looking titanium alloy wheels and blue Alcantara seats. But ultimately you’re buying it for the noise made by the giant oval tailpipe. 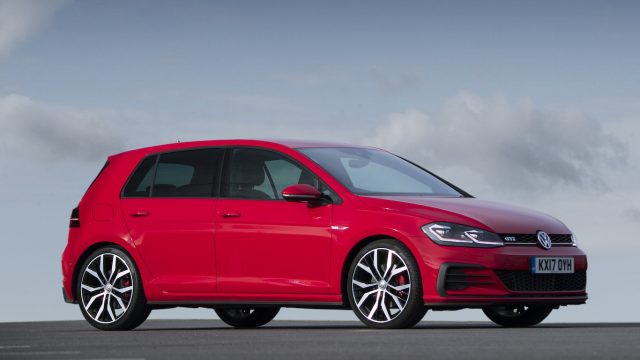 If a hot hatch is meant to be all things to all people, the Golf GTI is surely the ultimate expression of that. It’s classless yet classy, desirable but affordable, and as practical as a regular Golf hatchback. Does family motoring get cooler than this? The latest GTI is an absolute corker, with 230hp on tap from its 2.0-litre turbo motor. Make sure you keep it five-door and you’ll have a car that’s as usable as any normal family hatchback, but with a badge that truly means something.