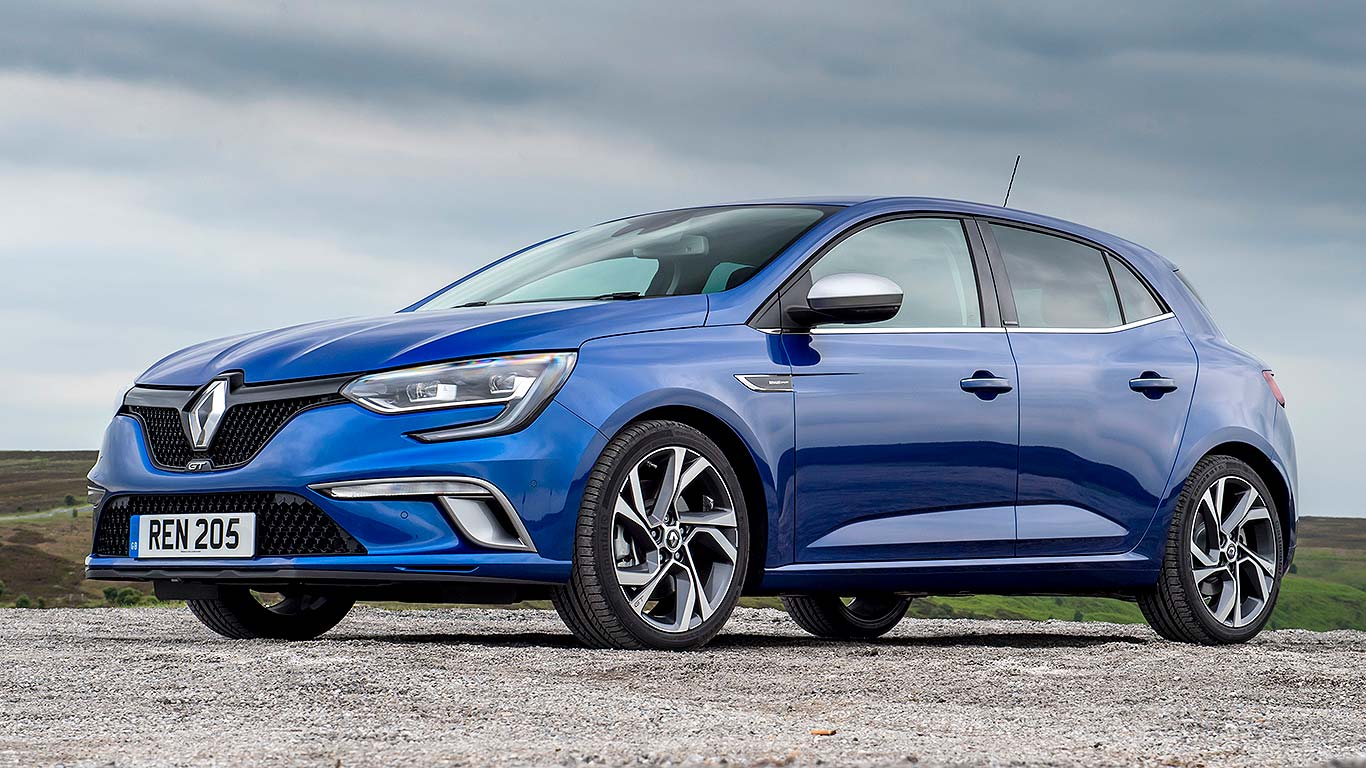 The new Renault Megane is such an important car for Renault, it couldn’t wait to let us drive it. We first drove it back in the tail end of 2015 but only now is it arriving in UK dealer showrooms. Time for a reminder of what the fourth generation of Renault’s Volkswagen Golf alternative is like.

A very good looking car indeed, that’s what it’s like. Easily the best-looking family hatch you can buy, no? The gorgeous design is particularly smart in some of Renault’s smart new colours, such as the Iron Blue hue our GT test car came in. Renault knows styling sells: the Megane will do well before people even get behind the wheel. 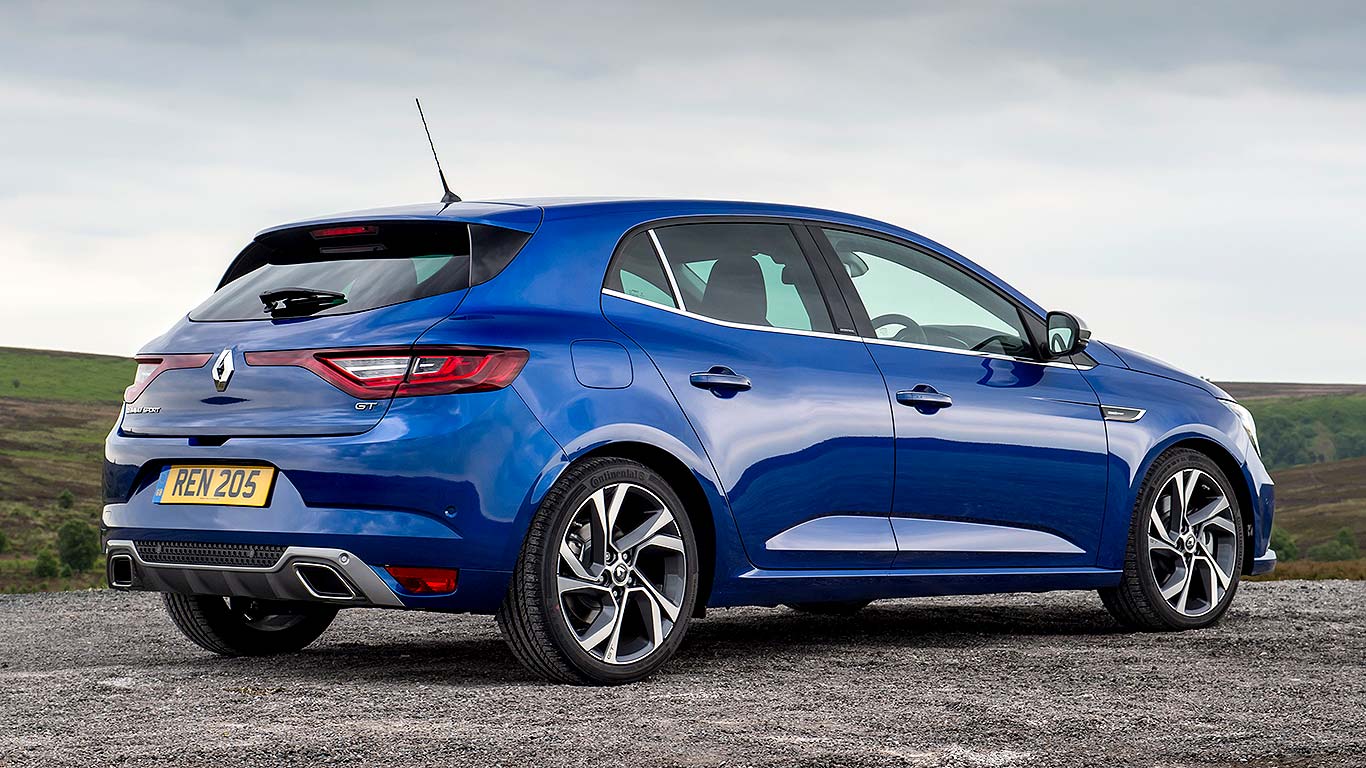 The new Megane range starts from a very keen £16,600 but we went straight to the top of the range here with the 205 1.6-litre TCe GT Nav. Boasting a seven-speed EDC automatic as standard, it costs £25,500: that’s Ford Focus ST territory. The Ford perhaps is the exception though: a Volkswagen Golf GTI costs £28,500. The GT is a warm hatch Renault: the new Renault Sport Megane follows later…

Renault will happily give you £1,750 towards the deposit on its three-year PCP deal if you’re keen: with an APR of 3.99%, this means a GT Megane would cost £359 a month, with an up-front customer deposit of £3,301. That seems a bit steep to us: deals on rivals can take the monthly cost to below £300 a month. 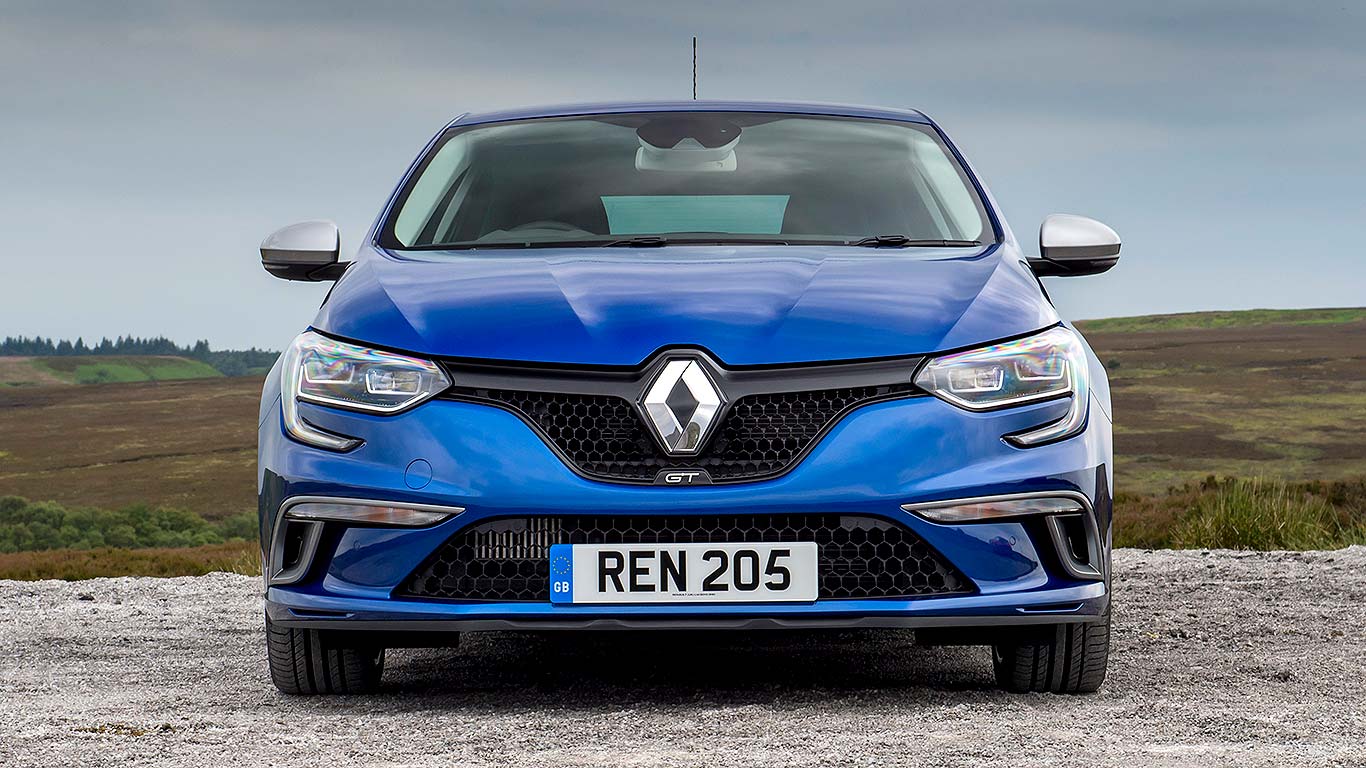 As mentioned, the new Megane GT is priced like a Ford Focus ST but has a 45hp power deficit; it’s not the full-fat hot hatch Renault’s planning to take on the Ford, Volkswagen and others. See it instead as a well-equipped, uniquely-styled warm hatch alternative to cars such as the Peugeot 308 GT and SEAT Leon FR. 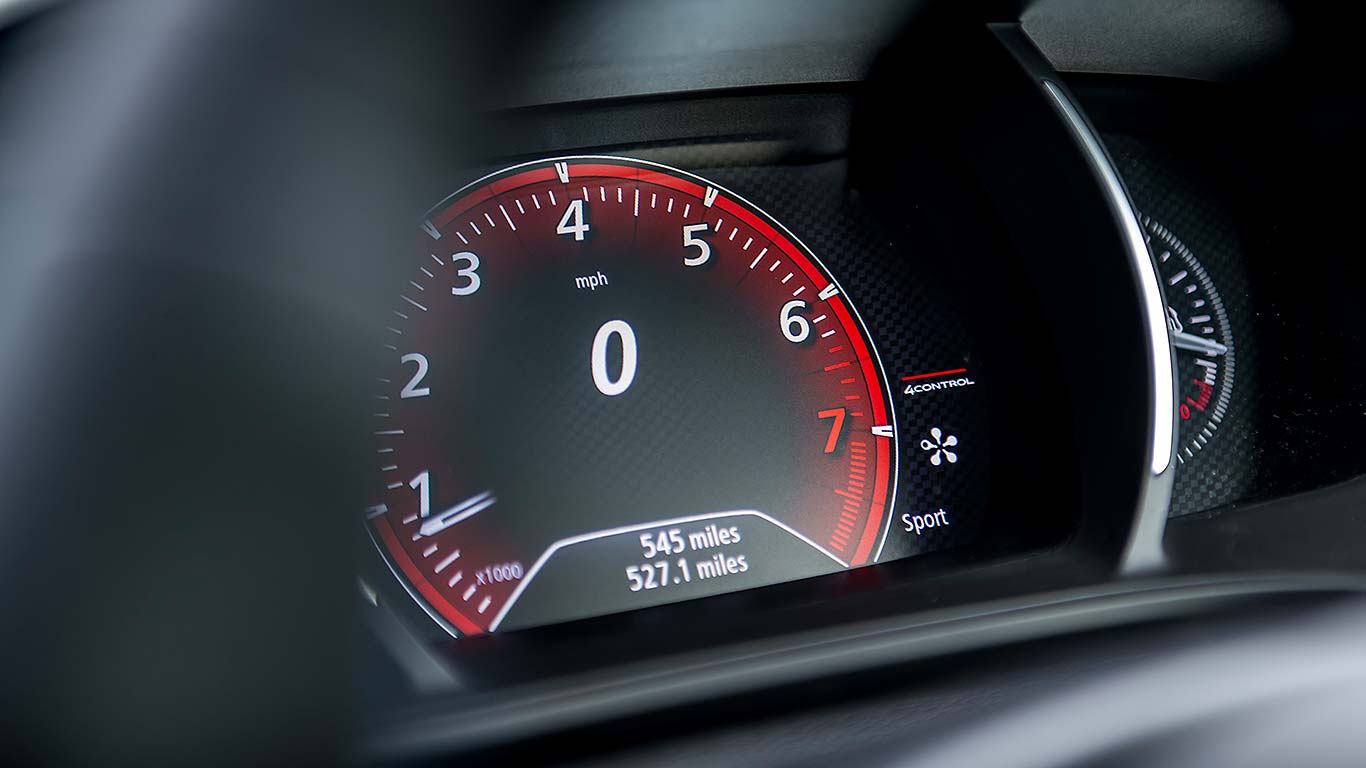 The 1.6-litre turbo engine is a Renault Nissan Alliance staple used in other hot models from the two brands; the Renault Sport Clio, Nissan Juke Nismo and Nissan Pulsar 1.6 DiG-T amongst others (well, two out of three ain’t bad…). 205 hp is complemented by 207lb-ft of torque. The dual-clutch EDC transmission is your only choice.

There’s something else too: Renault fits electronic rear-wheel steering to the Megane GT. With just 2.3 turns lock-to-lock, it’s very fast and gives the manoeuvrability of a much smaller car without trading stability at speed. Sector-unique tech, it’s a real standout feature of the GT. 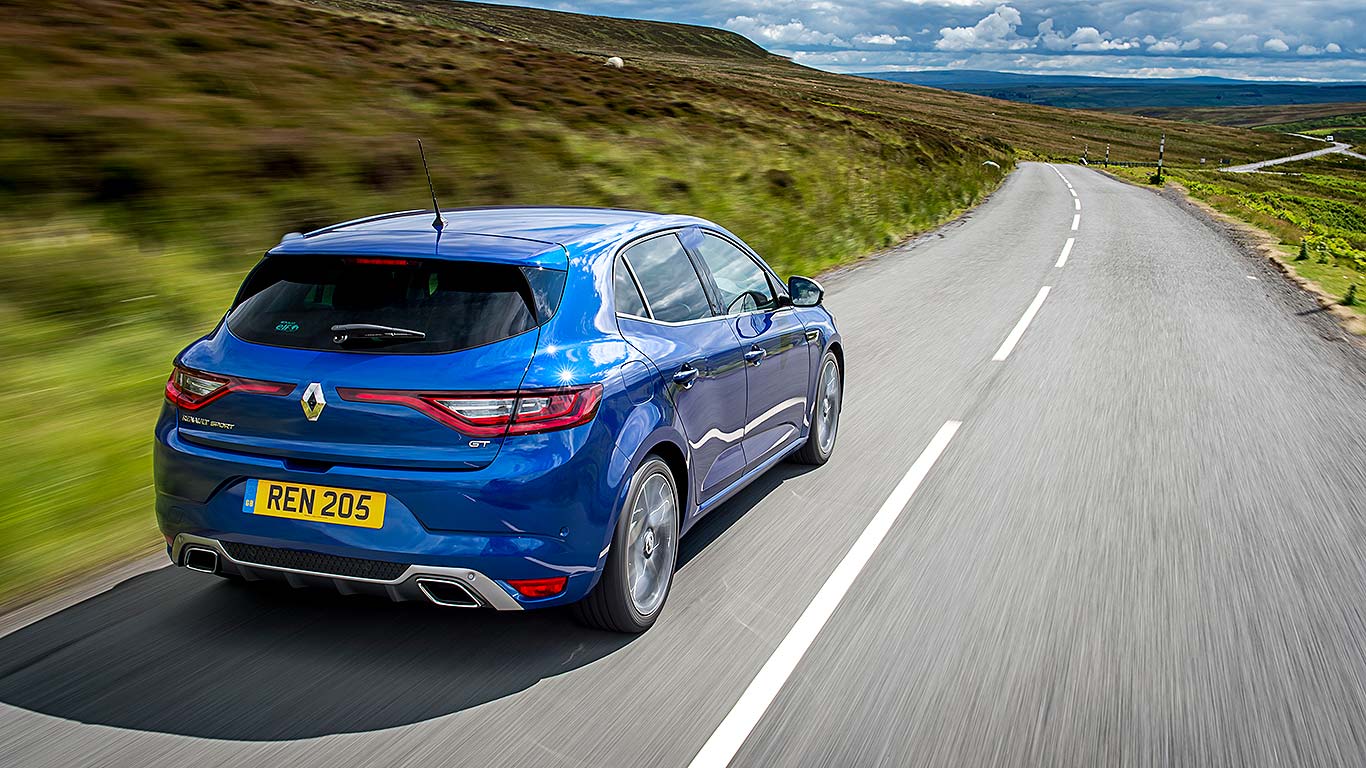 The seven-speed EDC’s launch control function helps it consistently run 0-62mph in 7.1 seconds, just a hair’s breadth behind a Ford Fiesta ST. As there’s more chance of them fluffing a gearchange, your traffic light grand prix status should be secure. It’s capable of 143mph all-out.

How do you use Renault launch control? Left foot on the brake pedal, pull and hold both gearshift paddles until ‘Launch Control On’ flashes on the dash. Floor the accelerator, release the brake pedal: cue the perfect launch. 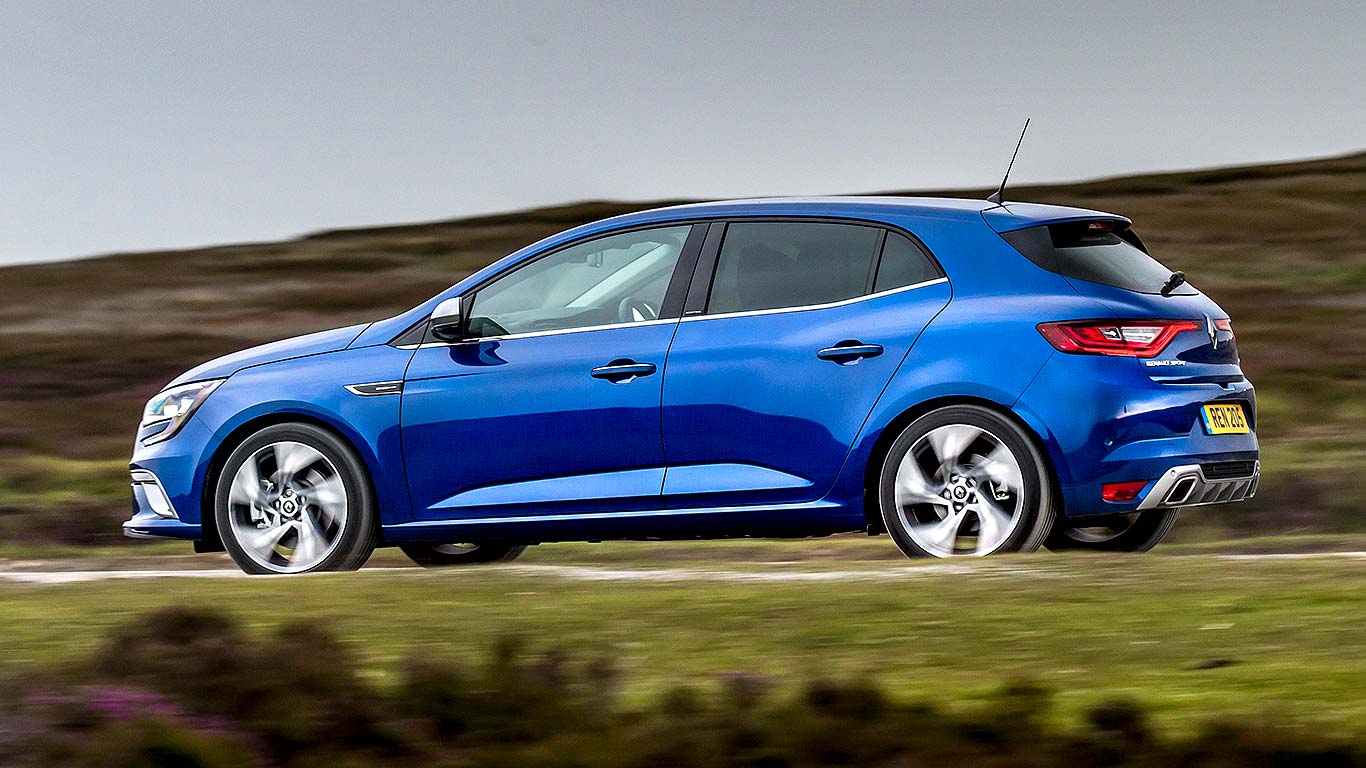 Big wheels mean the ride is a bit flaky in town, but it smooths out at speed. This is intentionally more GT than hot hatch so, if anything, the suspension might feel a touch too soft when you’re really chucking it about: generally, though, it’s a reasonably comfortable middle ground, with generally good body control. It’s quiet too, and Renault’s kept road bump-thump noise at bay. 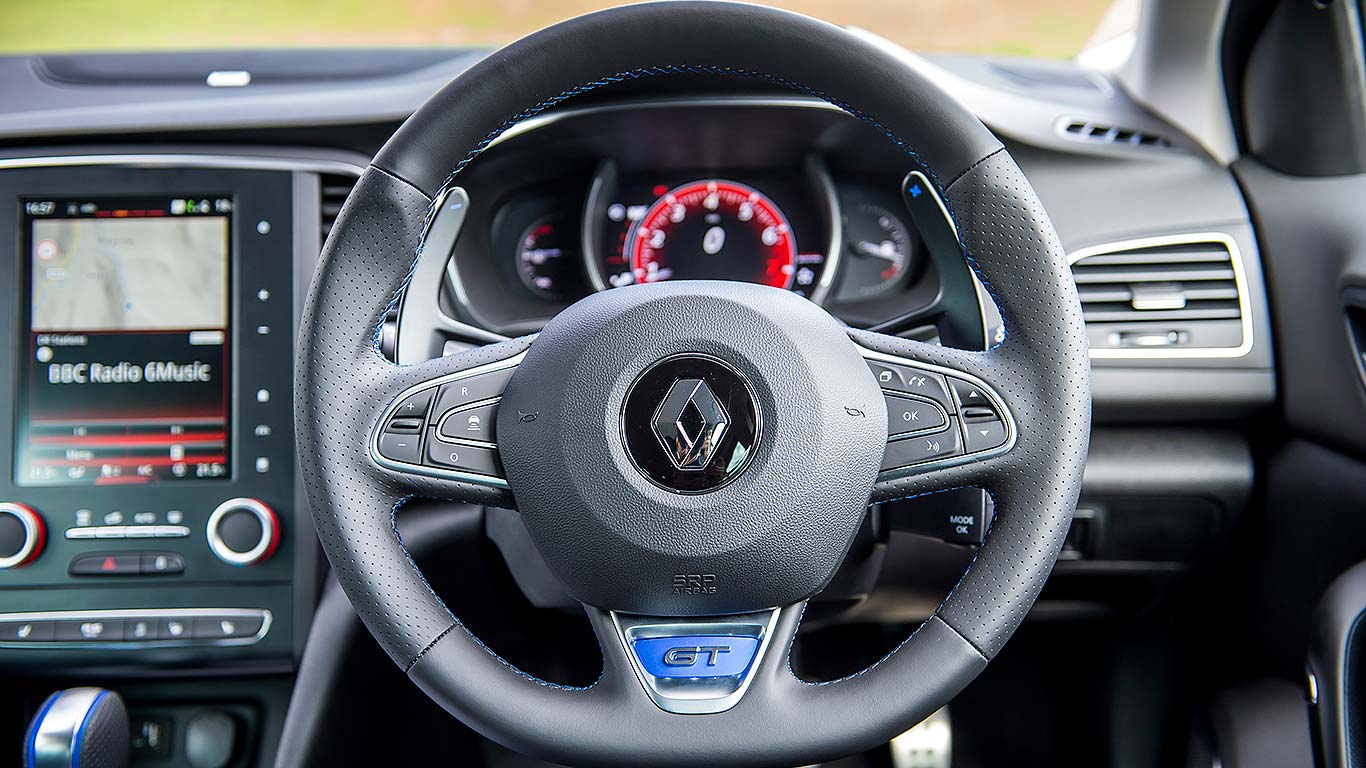 You’ll find driving the Megane GT fascinating for one reason: the rear-wheel steering. This gives it stand-out agility for a family hatch: you can feel the rear end turning as soon as you move the steering wheel, making it very responsive and sharp. It’s not unnerving though: while not particularly purist, it does make the GT more interesting to drive. 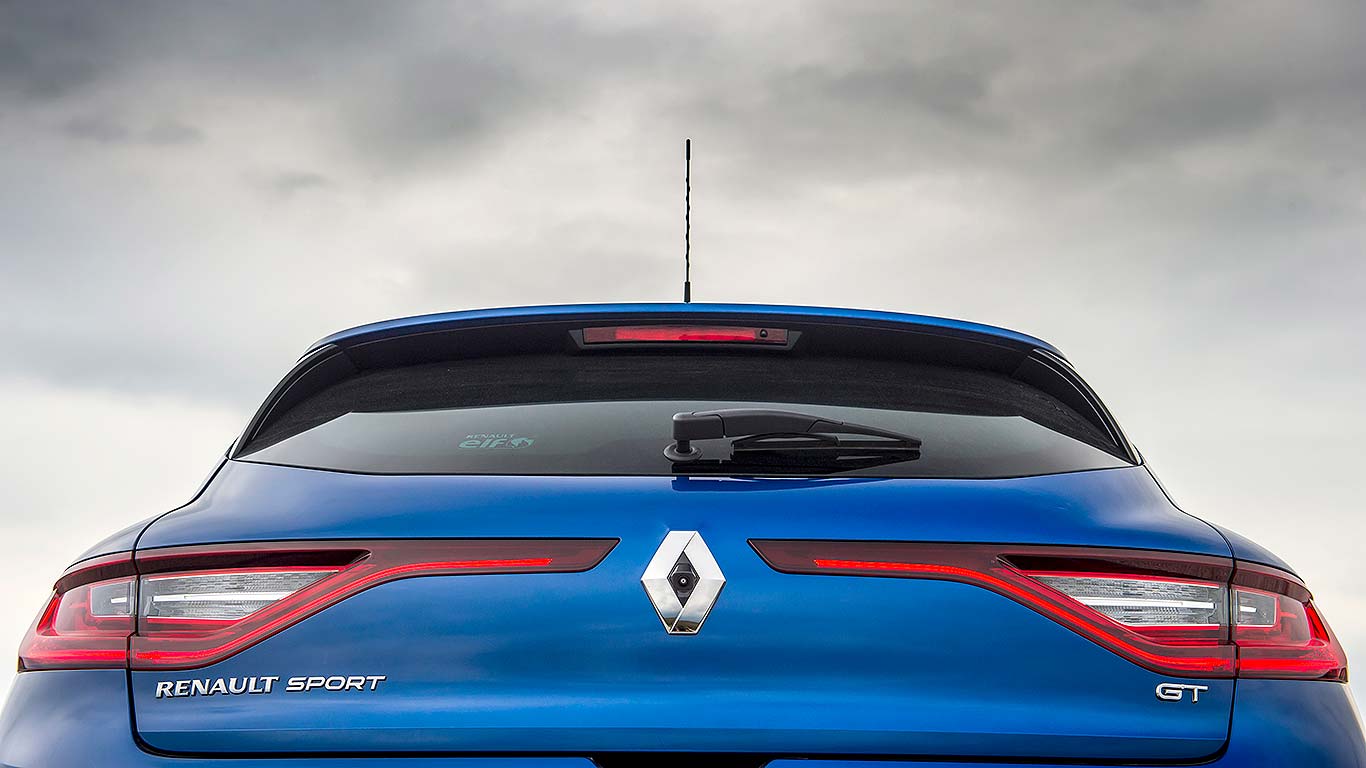 In common with many fizzed-up downsized turbo petrols, the 47.1mpg claimed economy of this 205hp motor is impressive (and aided by the EDC gearbox’s efficient shift patterns in auto mode). CO2 of 134g/km will keep it out of 2017’s punitive £500 VED tax band and Renault’s four-year warranty can be combined with a £499 four-year service pack to further control running costs. Just be careful of those big 18-inch diamond-cut alloys on kerbs… 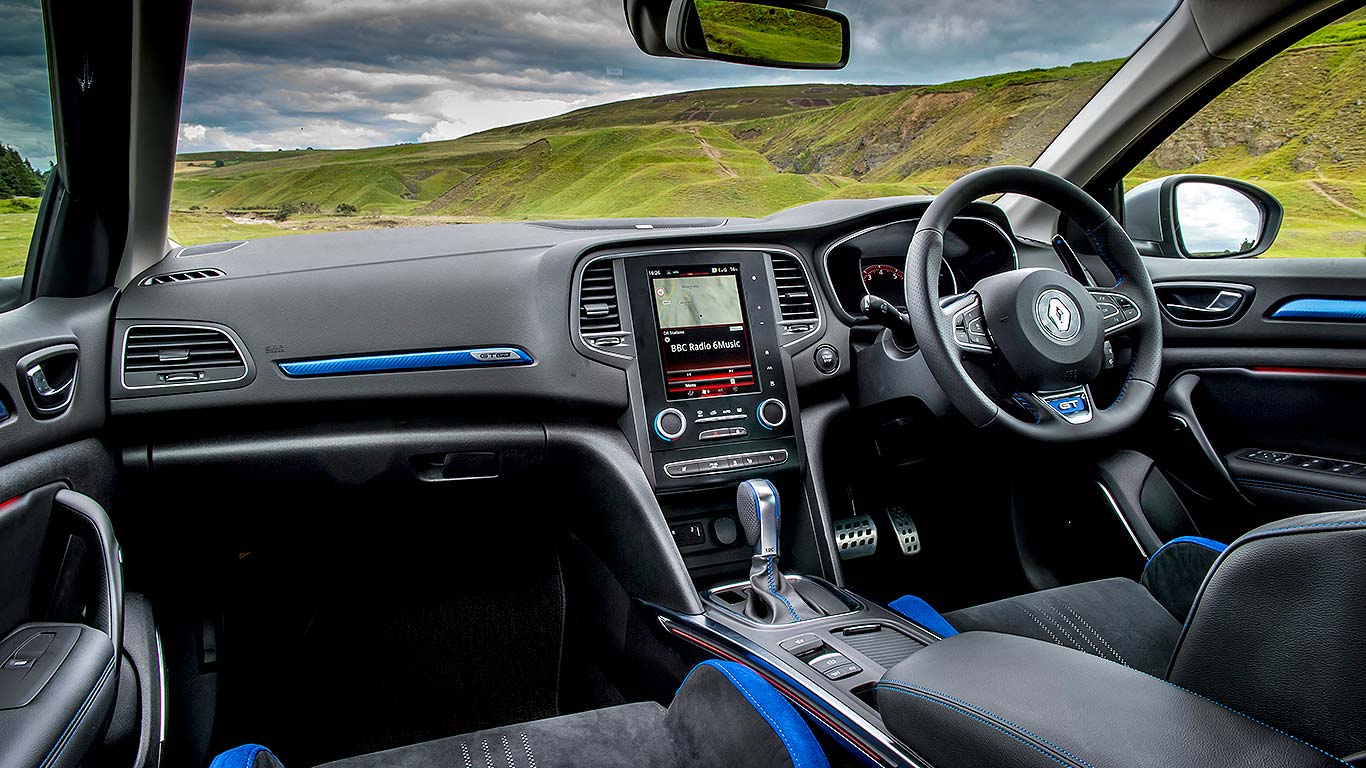 The dashboard is dominated by a big Tesla-style touchscreen that works really well. It’s a feature of the pricier Meganes and is worth the upgrade as it’s a treat to use. The GT’s ultra-deep, bolstered front seats are excellent, and the configurable electronic dial pack is top-notch. The steering wheel is gorgeous too. 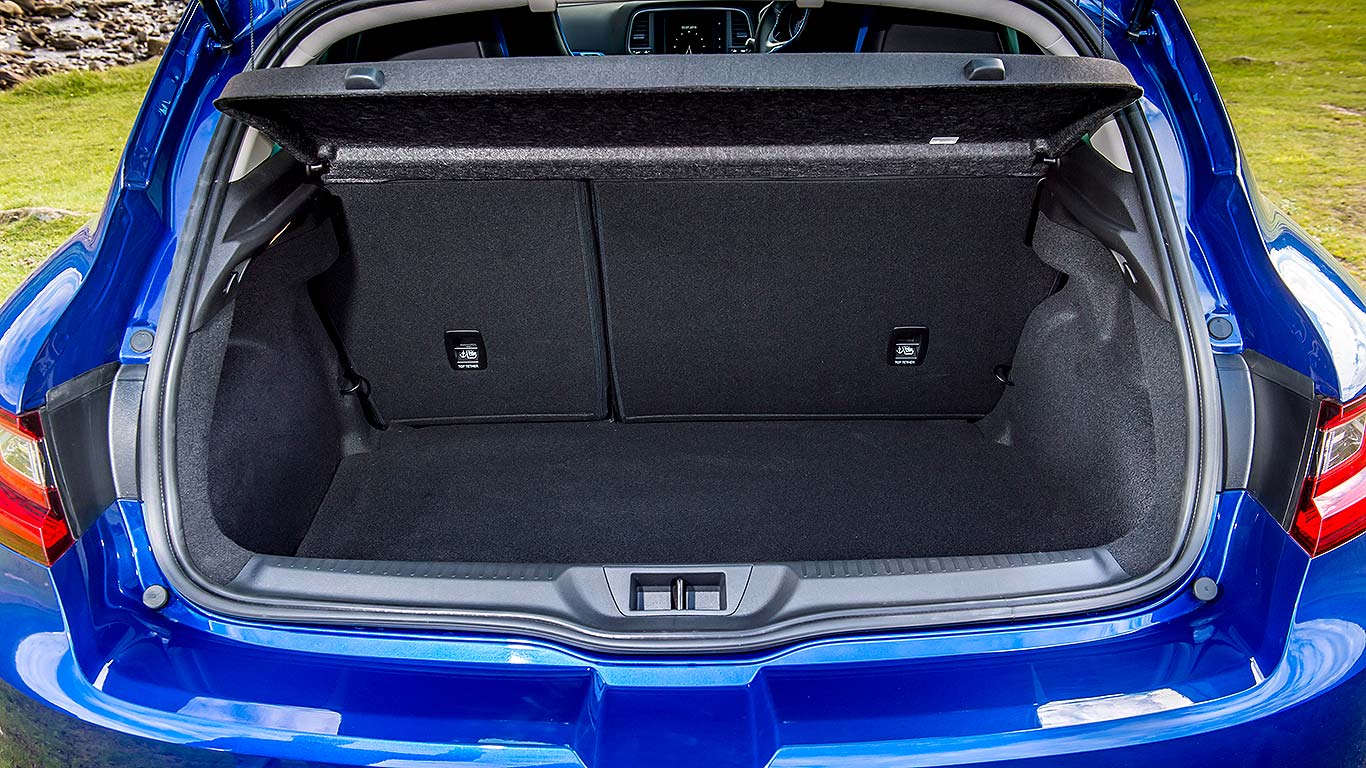 It looks superb yet still has five doors and a hatchback: this is good. What’s less good is interior packaging. It’s OK up front. The problem is the rear. Getting in and out is tricky and legroom is far too tight for a supposed family-friendly car. Time and again this is a grumble of French family hatchbacks: despite its all-new platform, the new Megane is no exception.

The boot is decent on paper with a 384-litre load space (four litres more than a VW Golf, note), although the oddly broad sill might make it tricky for some – loading items in will be OK but getting them out might be a stretch. Oh, and why, Renault, is there such a large upswept wiper patch on the driver’s side, blocking inches of forward vision in the rain? 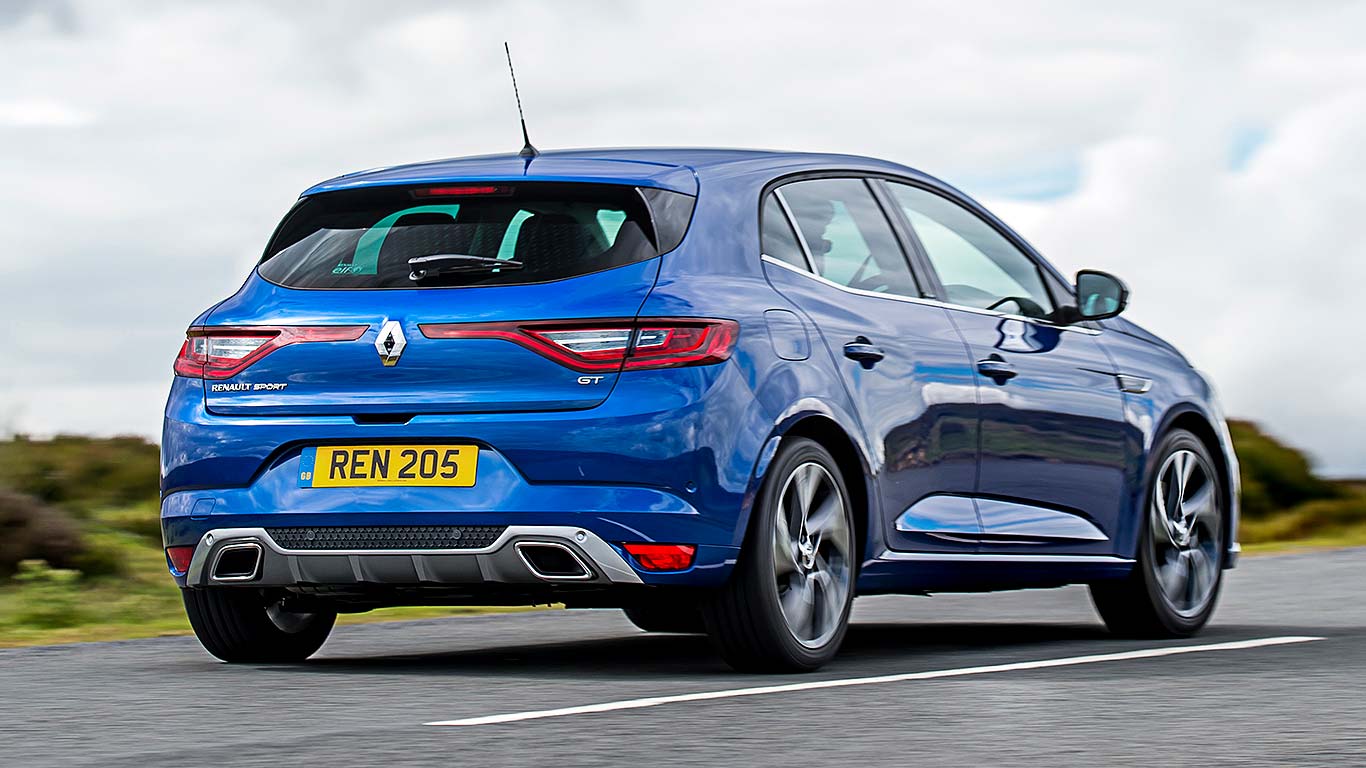 Four-wheel steering turns the rear wheels opposite to the fronts at low speeds, to aid agility, then in the same direction at high speeds to boost stability. Full LED headlights are paired with fine-looking LED units at the rear and, within the Tesla-style touchscreen, ‘multi-sense’ driving mode settings allow you to customise a whole host of settings even down to the engine sound. 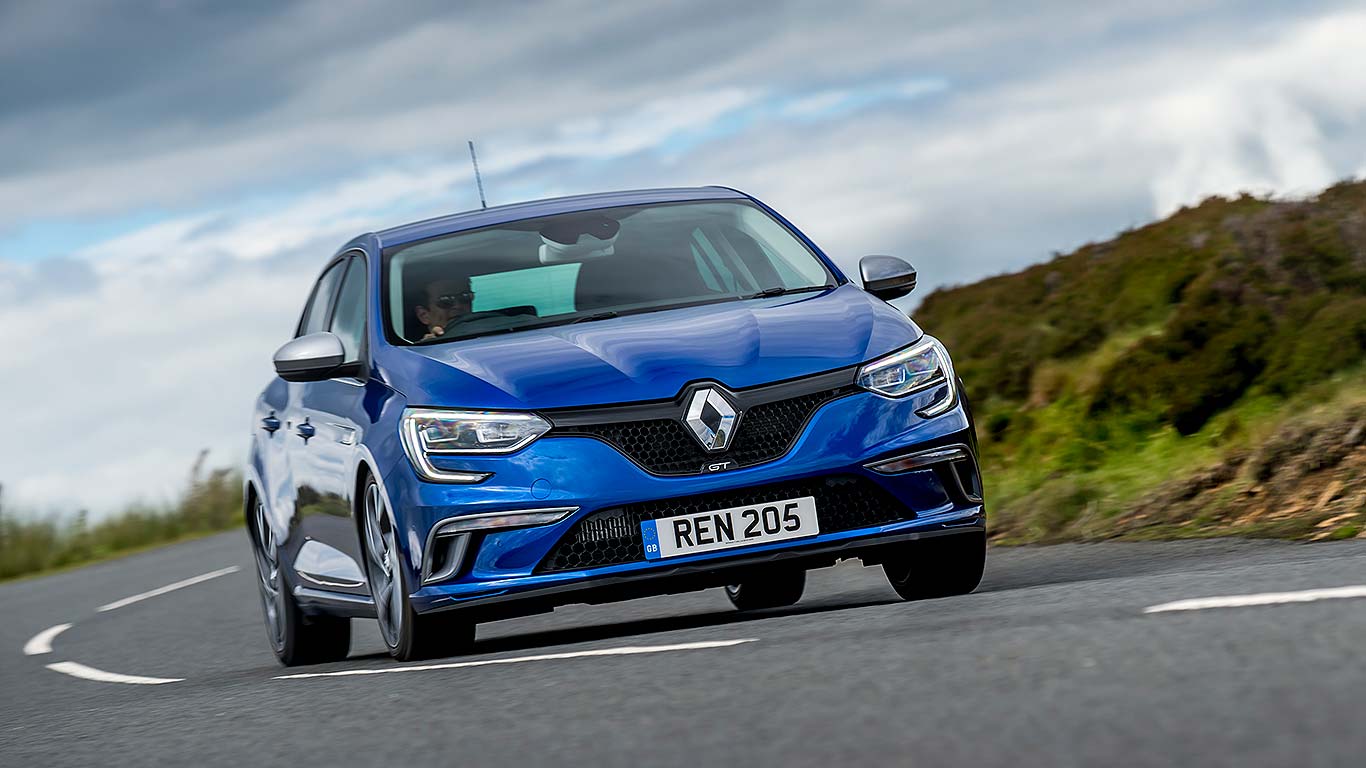 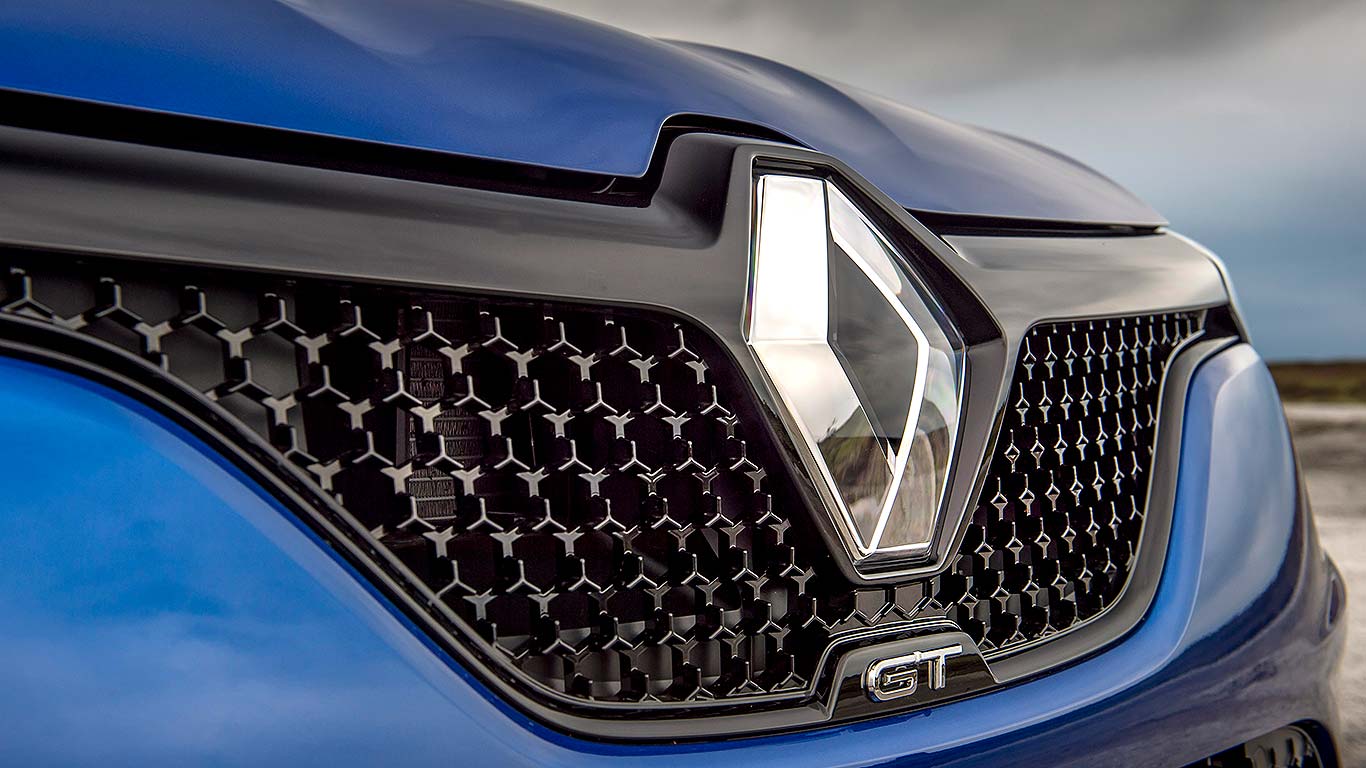 The GT Megane currently only offers the warmish 205hp 1.6-litre turbo petrol engine. If you want anything more economical, you’ll have to go for the cheaper GT-look GT Line Nav, which has 1.2-litre petrol and 1.5-litre dCi diesel options. Next year, though, a 165hp twin-turbo 1.6-litre dCi will come in four-wheel-steer GT trim. We’d probably go for that one.

A Golf GTI is more expensive new but it’s certainly not secondhand: hunt out a nearly-new GTI or GTD for an appealing alternative to the Megane GT. If it’s not hot enough for you, also consider the runout Megane Renault Sport Cup-S (get one new, while you can, from £23,995, or much less if you can find a pre-registered one). 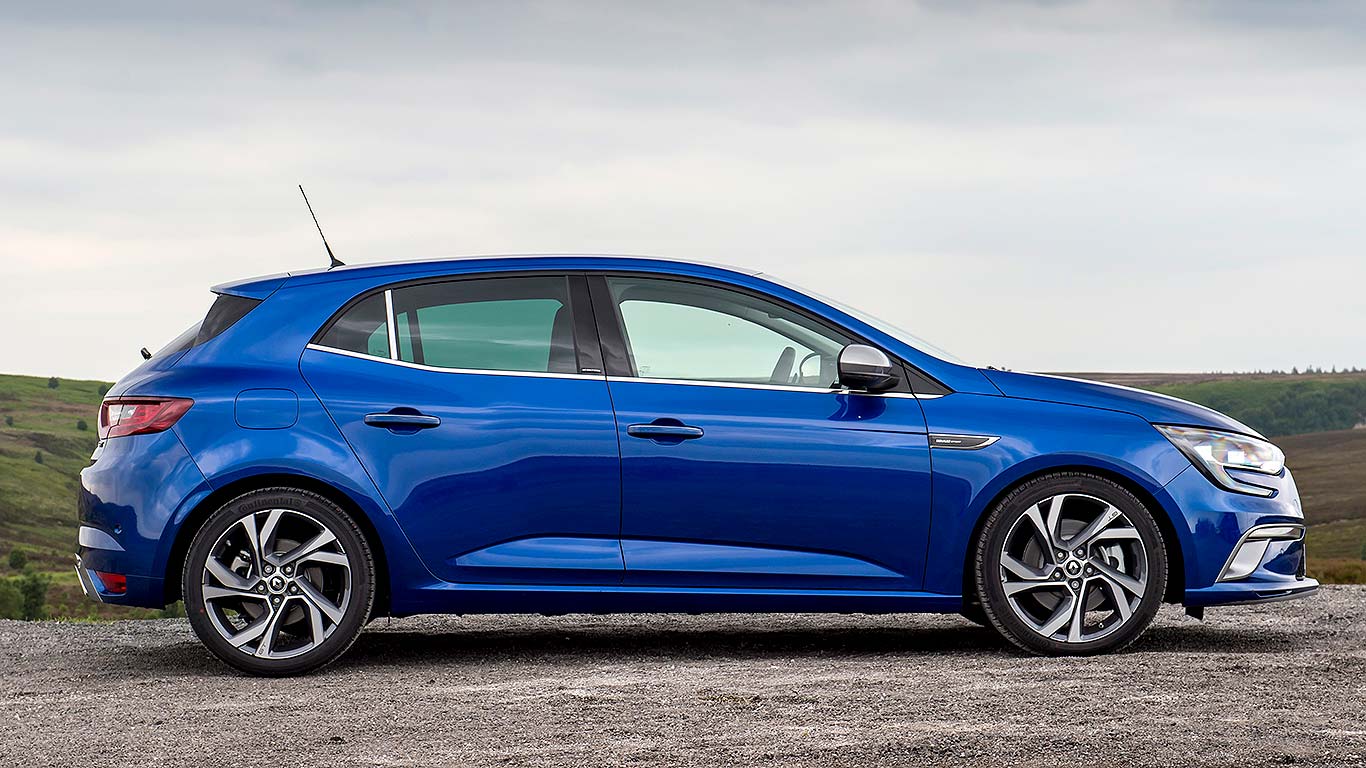 We’d probably wait for that twin-turbo diesel, frankly. Or maybe the full-fat Renault Sport Megane. The GT is interesting, with its sharp four-wheel steering and beautiful styling (honestly, it’s a peach to look at). But it occupies an odd middle ground: British buyers in particular prefer hot to warm and, when a Ford Focus ST is so comparatively well priced (and, ironically, so much more practical), it’s hard to see how the Megane GT might sway you. Unless, that is, styling really does sell. 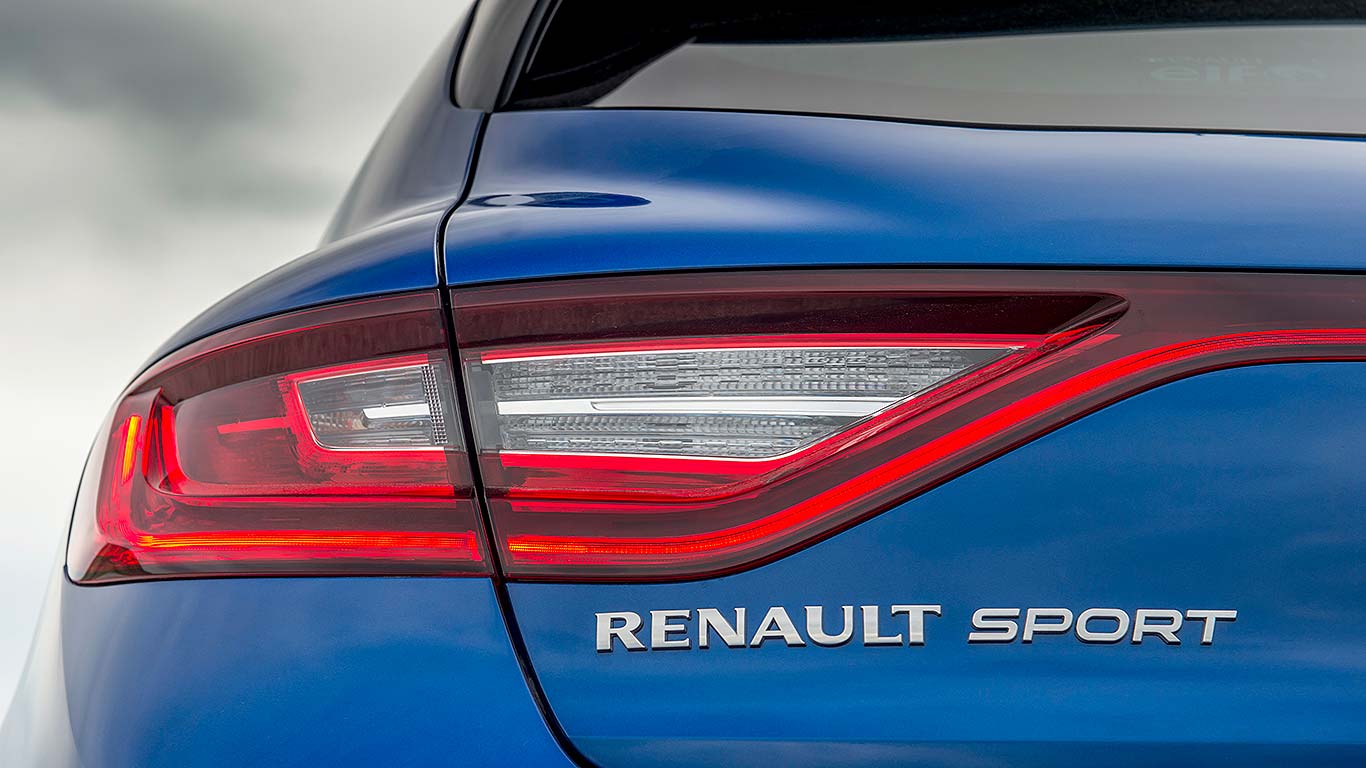 This may not be a Renault Sport Megane but Renault Sport has still had a hand in it, fitting bespoke springs, dampers and anti-roll bars. The chassis thus shows breeding missing from lesser Meganes and is a more satisfying warm hatch than most.