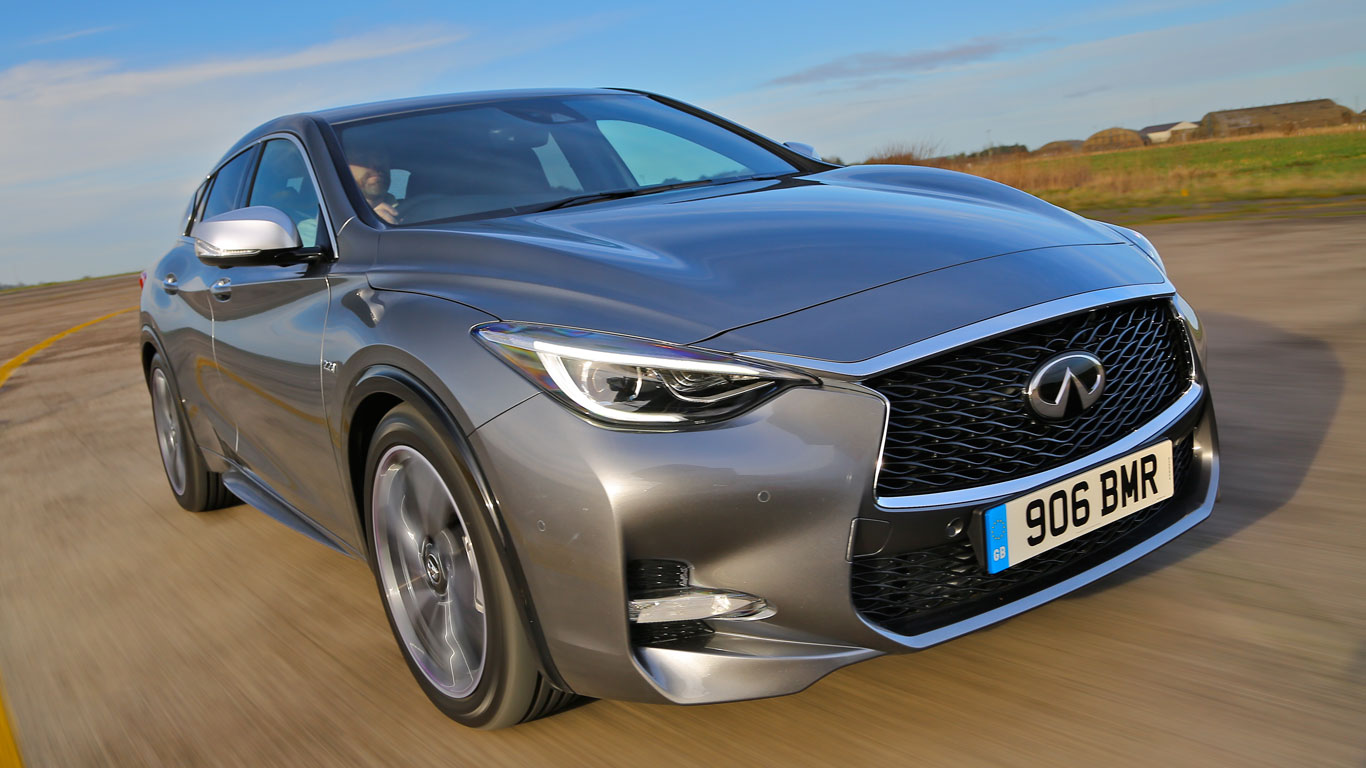 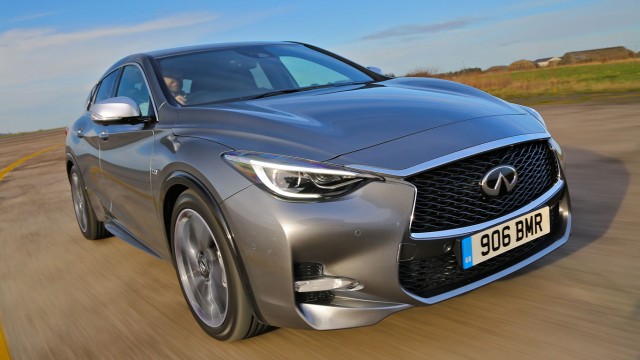 Infiniti is Nissan’s premium brand – like Lexus is to Toyota. It’s Nissan’s way of competing with the likes of BMW, Audi and Mercedes-Benz. However, its success so far in the UK has been slow, with just 10 dealers and 1,195 new cars registered last year.

Infiniti hopes the Q30 will catapult the brand into the premium mainstream. The car shares its platform with the Mercedes-Benz A-class, and is produced at Nissan’s Sunderland plant. 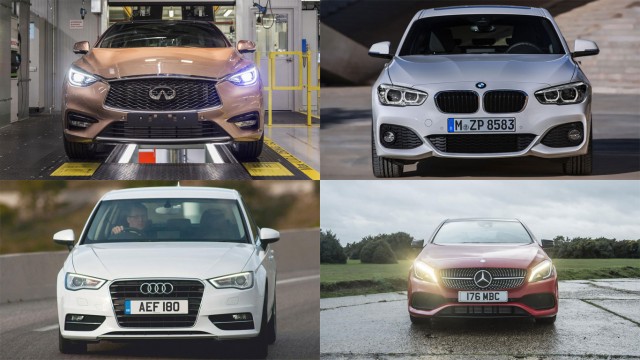 It’s a slightly unusual alternative to the likes of the BMW 1 Series, Audi A3 and, of course, the Mercedes-Benz A-class. Unlike these conventional premium hatchbacks, it sits a bit higher, offering more practicality (and with it, a slightly heftier price tag). It’s not a proper crossover, though – that will come in the form of the QX30, due later this year. The whole thing is a tad confusing – but following convention isn’t what the Q30 is all about. 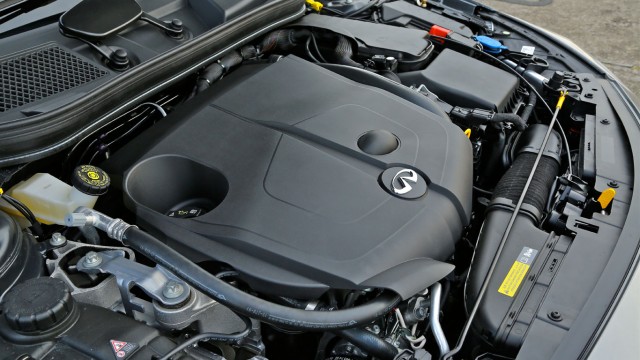 The range kicks off with a 1.6-litre petrol engine producing 122hp. It’s likely to be a small-seller in the UK, and for good reason; it doesn’t exactly live up to the Infiniti’s premium image. The most popular choice will be a 1.5-litre Renault turbodiesel, producing 109hp, while a 2.2-litre turbodiesel borrowed from Mercedes-Benz tops the range. That’s the model we’ve got on test here. 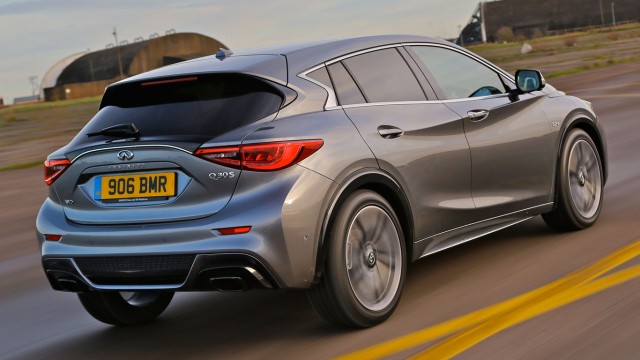 It’s actually pretty good. Despite the raised ride height, body roll is well-contained – although that is partly down to the Sport model we’re testing here, which rides 15mm lower than the regular car. We’d opt for Premium-spec, though – the Sport’s ride is definitely a touch on the firm side.

The 2.2-litre 170hp Mercedes-Benz turbodiesel is clattery on start-up, but offers impressive performance. Handling has been fine-tuned on British roads and you can tell – it turns in well, with the four-wheel drive of our test car providing excellent levels of grip. The steering is on the light side, with little feedback. 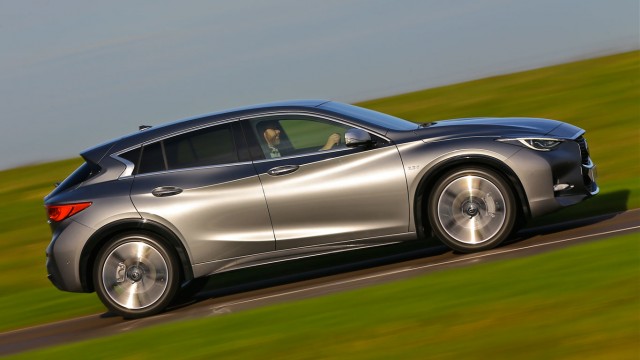 On paper, the 2.2-litre turbodiesel returns 57.6mpg. That’s impressive, especially when you consider the performance and the fuel-sapping four-wheel-drive system. Unfortunately, during our week-long, 500-mile test, the Q30’s trip computer is only showing early-30s mpg. We weren’t driving it with economy in mind, admittedly, and our experience of this Mercedes-Benz engine suggests it does need running in before decent economy is returned. Even so, it’s unusual for real-life economy to be quite so far from the official figure. 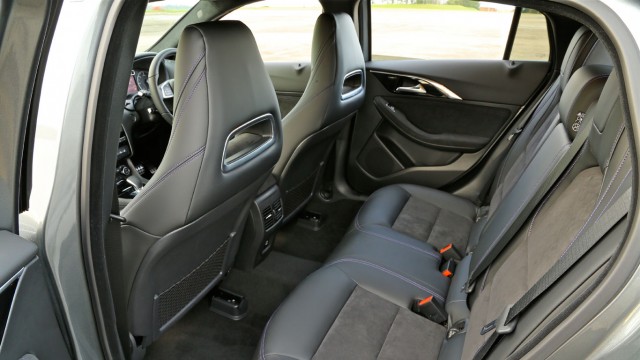 It’s a relatively big car, the Q30, and that translates into good levels of interior space. The boot comes in at 368 litres, bigger than that of a Mercedes-Benz A-Class (341 litres) but slotting in neatly between a BMW 1 Series (360 litres) and an Audi A3 Sportback (380 litres). 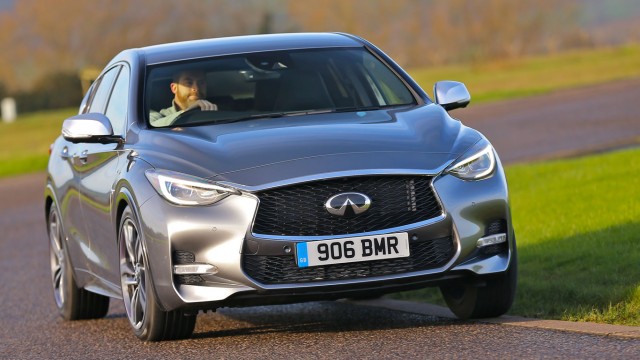 Safety is where the Q30 excels. It’s actually the safest car in its class, according to Euro NCAP, scoring five stars and an impressive 86% in the child occupant test, plus 84% for adults. It also scored highly in the pedestrian-impact tests – thanks partly to a bonnet that pops up if sensors detect a person has been struck. 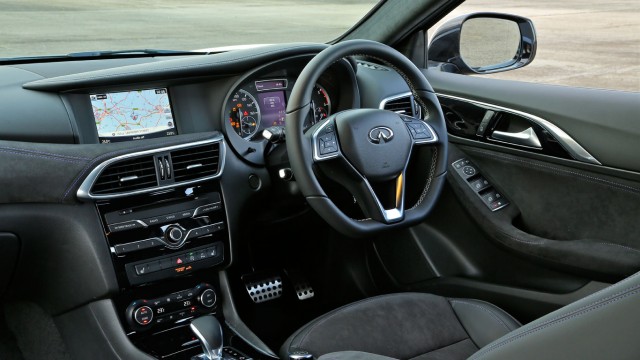 We’d be tempted by the 2.2-litre turbodiesel tested here (in more comfortable Premium spec). In reality, though, the 1.5-litre diesel will make more sense for most people – company car drivers especially. 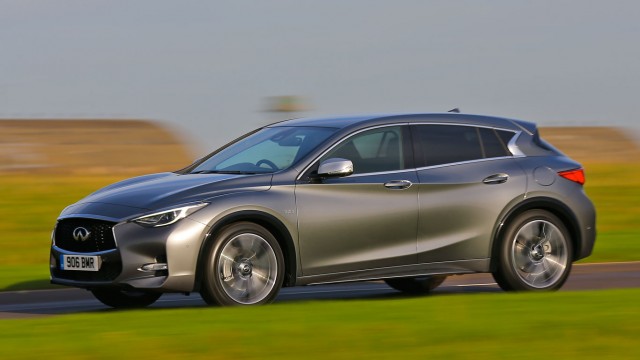 If you’re a company car driver considering yet another Audi A3 or the Infiniti, we can understand why you’d be tempted. The Q30 looks great, offers good levels of practicality and is extremely safe. It also drives well, although keen drivers will be better off with a BMW 1 Series.

Our biggest gripe with the Q30 is that it’s just a little bit too much of a Nissan/Mercedes parts bin. It fails to feel as premium as the Mercedes, or most other rivals, and there are switches and instruments everywhere that have clearly been lifted from other models. You’re making a statement buying this car – in Infiniti’s own words, it ‘challenges convention’ – so you’re different from all the Mercedes/BMW/Audi crowd. But you’re making that statement by buying a car that’s basically a Mercedes-Benz A-class, but not as good. 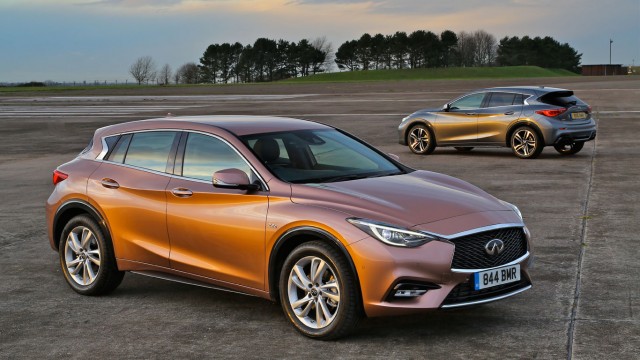 The Mercedes-Benz A-class isn’t known for its comfortable seats, so Infiniti has designed special seats for the Q30. It says the seat-back has been engineered to match the curvature of the spine, helping to reduce backache on long journeys.