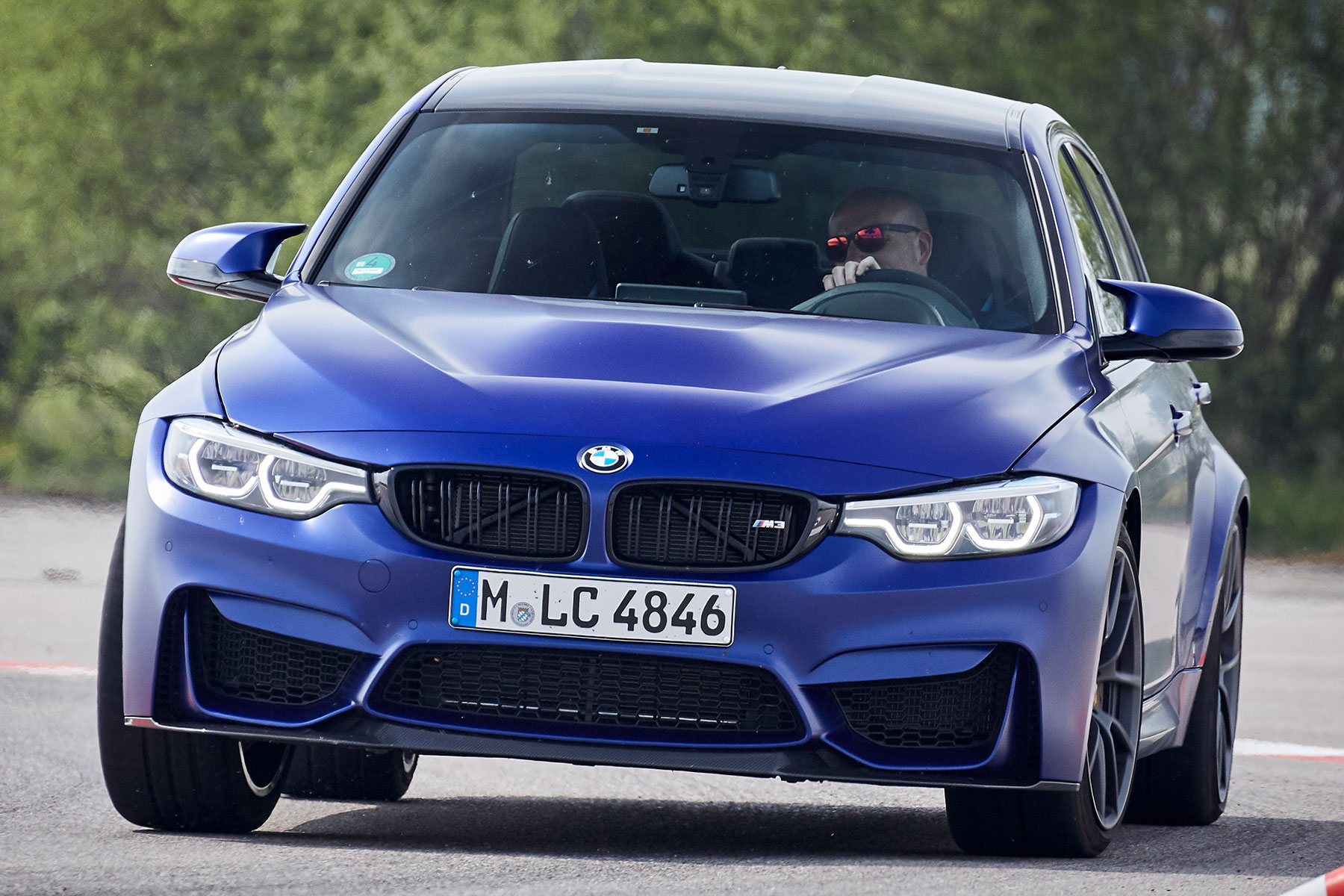 With the M3 CS, BMW has used everything it knows about making the current F80 model a force to be reckoned with. It’s been something of a project passion for the engineers, stung by  early criticism that the first M3 and M4 Coupe, released in 2014, were lacking a little feel and a bit skittish on the limit. This, then, is the most ‘M’ 3 of all.

It goes out of production soon. Around 1,200 will be built – BMW M is not quoting an exact figure, so this is not strictly a ‘limited edition’ model – and then that’s it for the M3. It doesn’t comply with new WLTP fuel economy regulations and, as there’s a new 3 Series due later this year, BMW isn’t going to the expense of converting it just for a few extra months of sales. (The related M4 CS will, however, continue, after a few months’ hiatus.)

We’re assuming there will be a new M3, but nothing has been confirmed. Rather unsatisfyingly, BMW nomenclature forces the coupe to be called M4, a sub-brand with zero heritage. If it does arguably the logical thing and makes the next hot M4 a Gran Coupe four-door, where does that leave the four-door M3 saloon? Rather them than us – it’s a bit of a dog’s dinner at the moment. 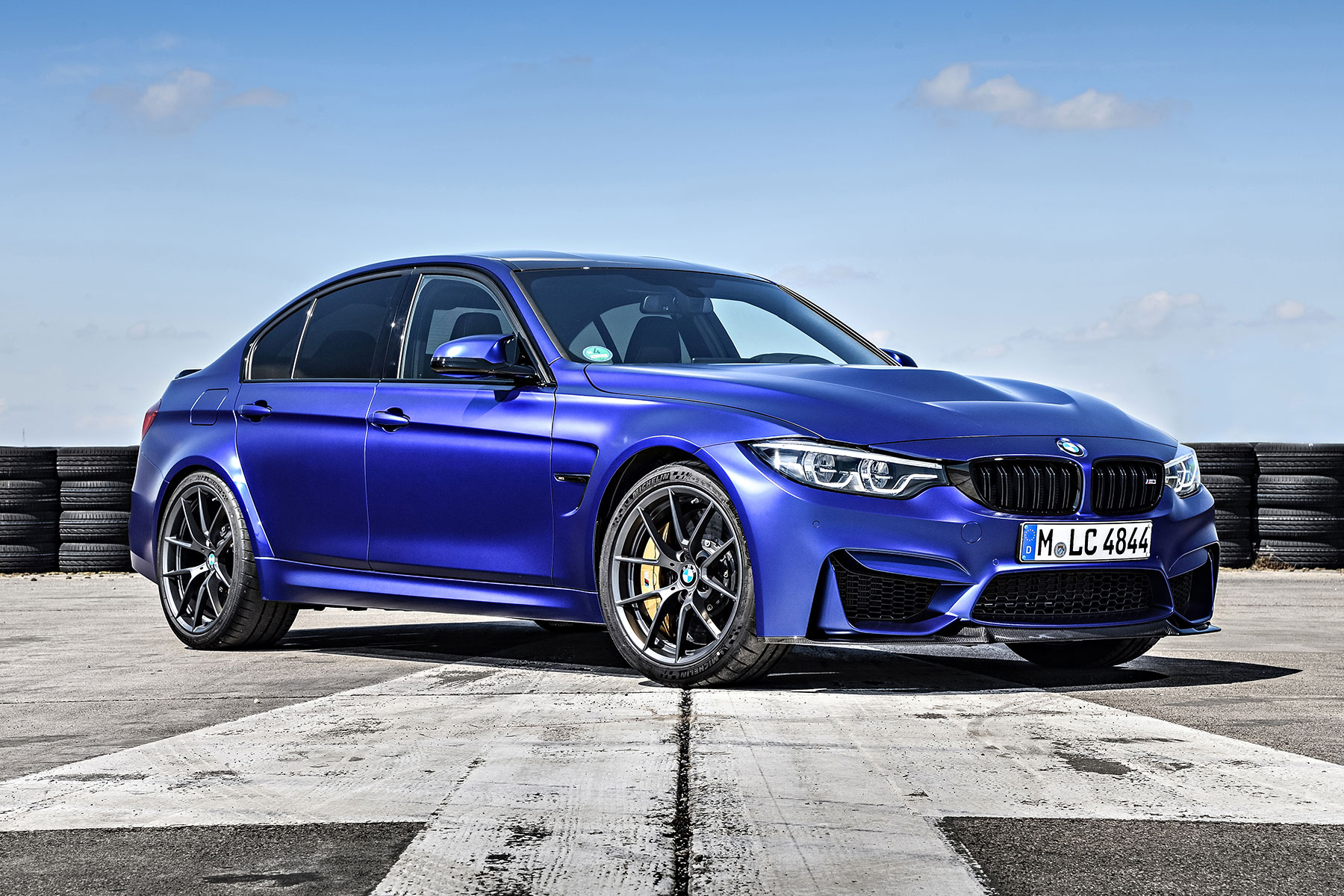 Priced from (deep breath) £86,425, the new M3 CS joins the already-launched M4 CS in the line-up. It should, if it’s on the money, be more of a collectable with a shallow depreciation curve. To see whether it’s a car going out on a high (and one that can justify a breathtaking price tag), we flew to Munich for some time on autobahns, fast country roads and BMW’s own test track.

The M3 CS looks magnificent. Better-resolved than the M4 CS, it is authentic and full of intent. It wears its heartful of heritage on its sleeve. Cecotto, Soper, Ravaglia… it’s all here. Your writer even liked the matt blue paint of the test cars (called Frozen Dark Blue II Metallic), for once not wishing to polish it up to a shine.

Eyes are drawn first to the amazing-looking rear Gurney wing, in exposed carbon fibre. It’s big and standout, and it’s only a matter of time before replicas find their way to middle-aged 320d M Sports. It’s there for a reason: clamping down the rear end when barrelling along the autobahn. 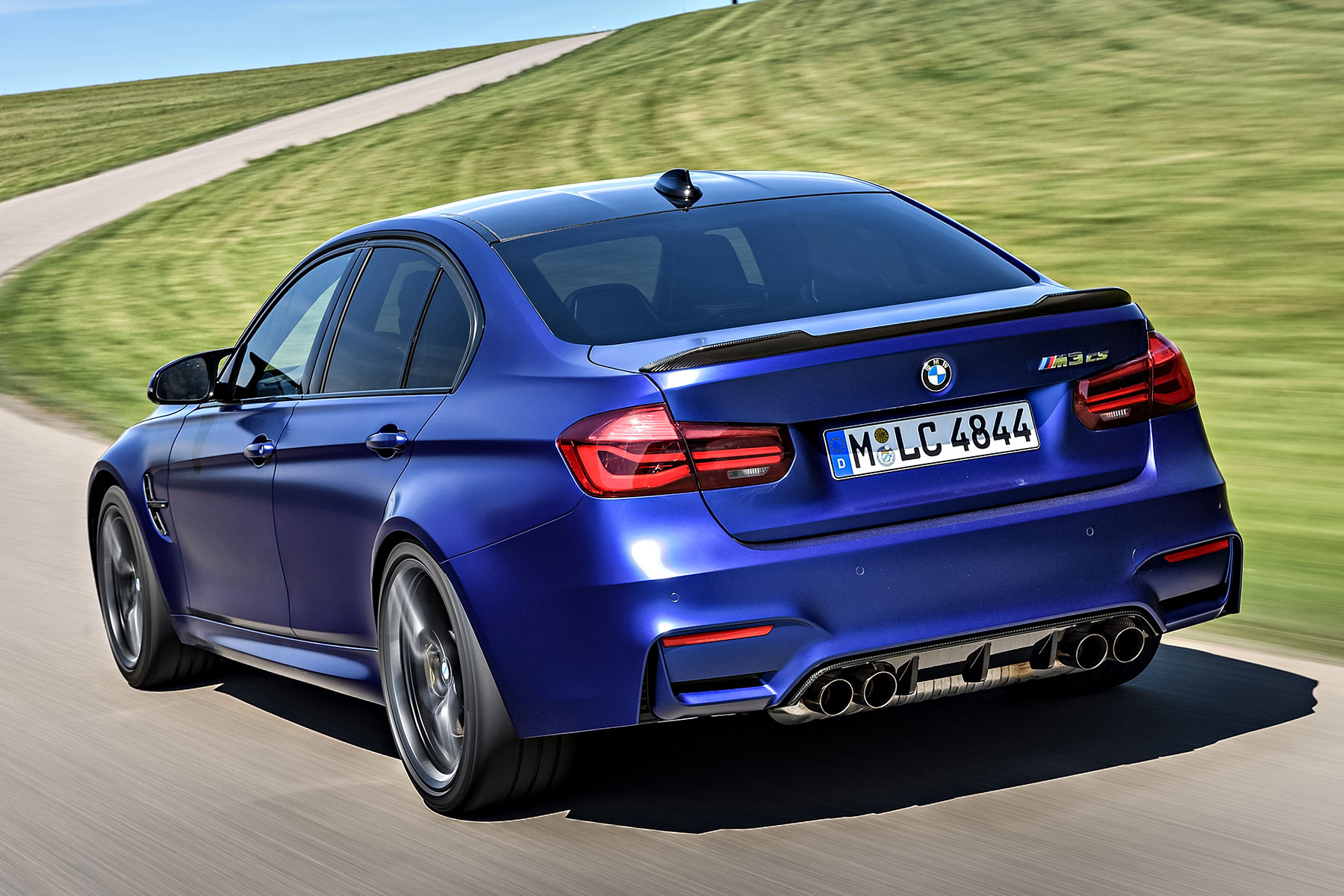 BMW has balanced this rear-end lift reduction with a larger front splitter, also made from carbon fibre. Again, it’s prominent, jutting out from the front bumper with authority. Next, you’ll notice the carbon fibre reinforced plastic (CFRP) roof, which BMW says cuts a healthy 6kg from the kerbweight – and that’s weight taken from the highest point in the car, further benefitting handling.

Because of the eye candy elsewhere, you may not spot it at first, but eventually you will: the bonnet. Again made from CFRP, it’s a magnificently meaty structure, bulging like no M3 bonnet before it. There’s an air outlet near its leading edge, to reduce drag, and BMW told me such are its contours, it’s only making it from CFRP that made it a production reality. Building tooling to make this from metal would be unjustifiably expensive. It would also be 25 percent heavier…

The finishing details are the forged Orbit Grey Matt wheels, 20-inch at the rear, 19-inch at the front. They look brilliant, and are extremely light weight: 10kg at the rear, 9kg up front. Significantly, they’re fitted with Michelin Pilot Sport Cup 2 tyres. These ‘Cup’ boots don’t only give the M3 CS even more of a potent stance, they also, as we shall see, transform how it drives. 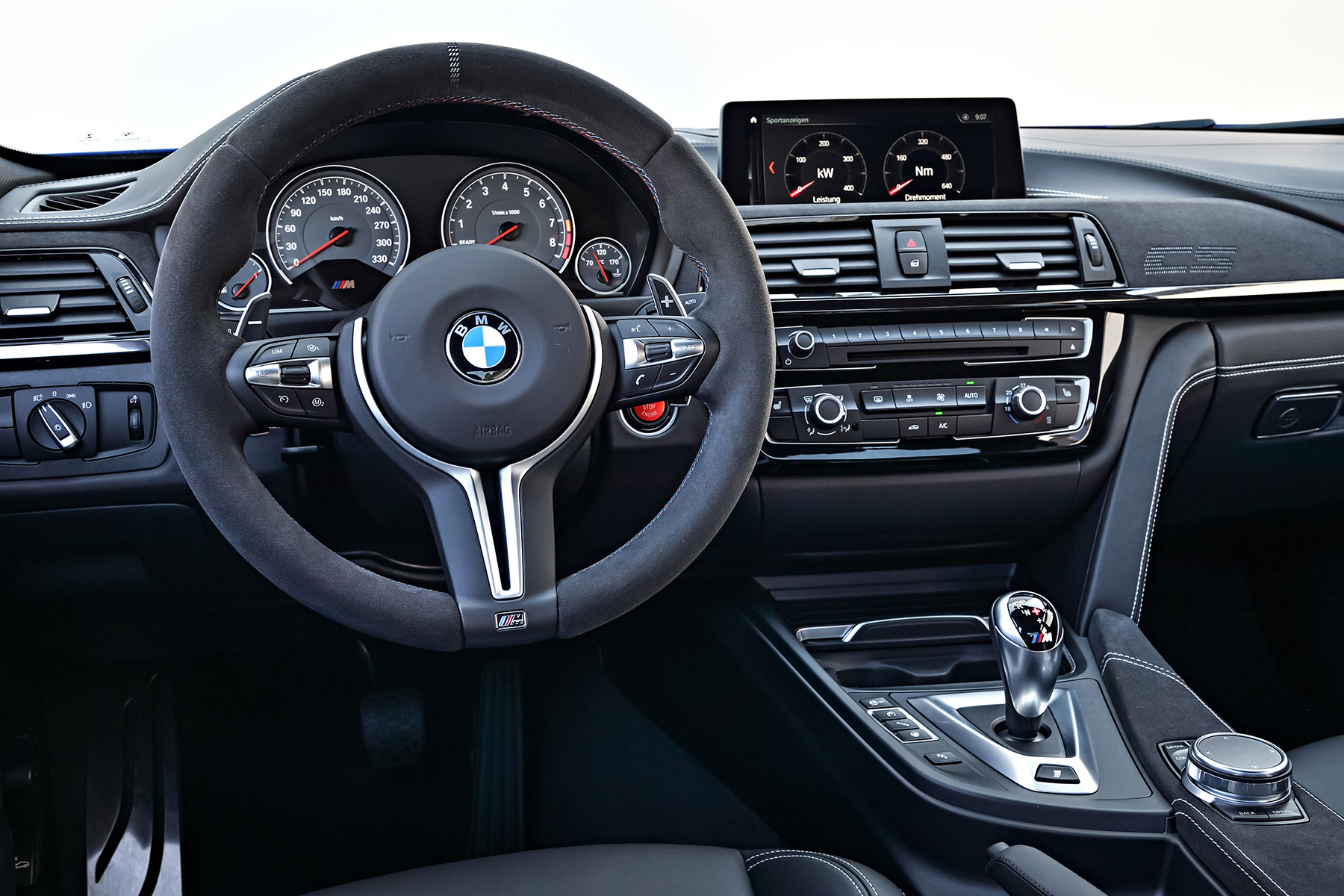 The first thing you notice when getting into the M3 CS is how far you’re able to drop down. The electric chairs have been canned in favour of regular manual-adjust pews, and they can be positioned nice and low for a pleasingly racy feel behind the wheel. You even get subtle ‘M’ stripes on the seatbelts.

The seats are pretty firm, and some on the event found them a bit hard and bolstered, but this writer thought them spot on, as was the firm Alcantara-covered steering wheel that’s a big improvement over early overly-chunky leather F80 wheels. ‘M’ dials glow white, not amber, and the stubby M DCT gearlever (it’s standard – there’s no manual) continues to look dinky and weedy in the centre console. It doesn’t even attempt to feel mechanical: it’s a bit unsatisfying. 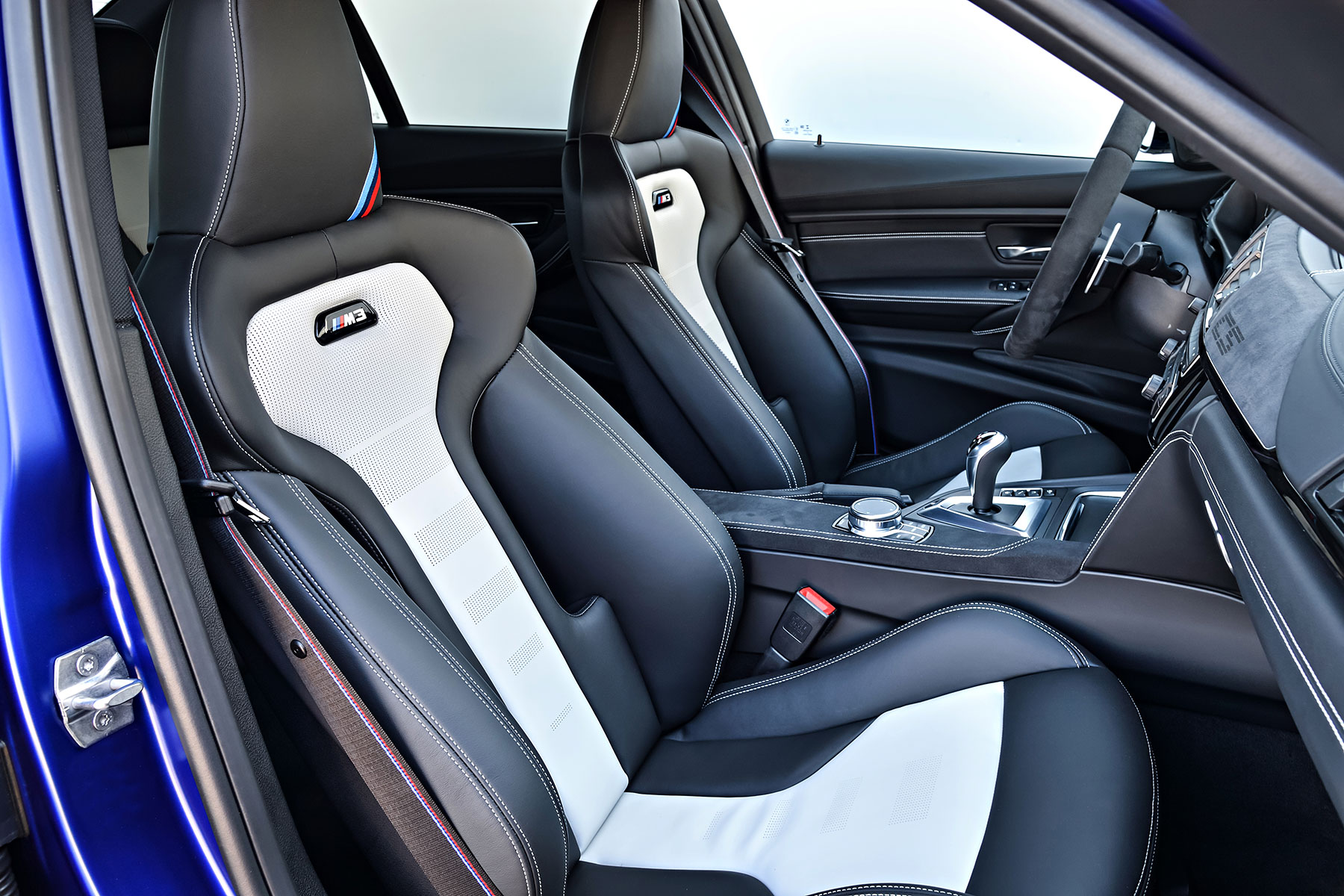 Then there are all the M-related buttons. ‘M1’ and ‘M2’ on the steering wheel to pull up favoured profiles. Three stages of gearshift immediacy on the console, plus buttons to tailor damping, stability control and engine response. Best advice is to spend a morning finding two favoured configurations, save them in the M-buttons, then leave well alone.

To save weight, BMW has dropped full climate control, so you have the semi-auto setup of a basic 3 Series. This is fine: it hasn’t been silly enough to remove air con, so it’s a decent purist’s half-way house.

There’s something else that will leave enthusiasts in raptures: an all-new CFRP centre console, in which the gearlever and handbrake sit. Helped by not having a central armrest, this saves 2kg, and better still, ‘looks’ motorsport. It’s slightly tinny when you rap your knuckles on it. Fiddling with the gearshifter shows it to be a bit of an echo chamber. Still, it’s a super touch that, BMW M3 CS project engineer Christian Karg told me, takes weight out of the car right where it’s needed: slap-bang in the middle. 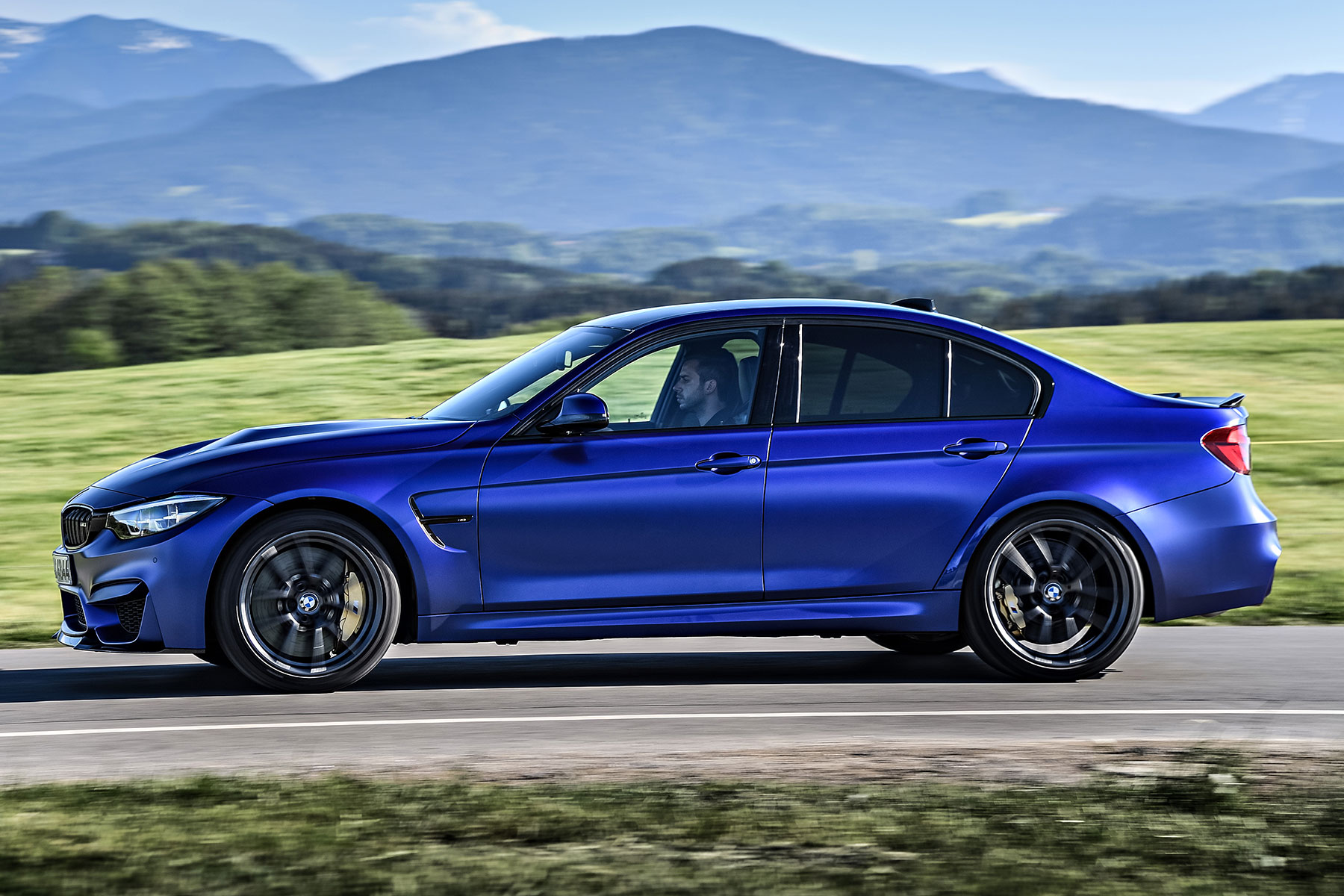 BMW knows us too well. It stored our test M3 CS indoors, meaning we had three walls and a shiny white floor to echo the start-up rort from the custom-made exhaust. So we were grinning the very instant we pressed the red starter button. The CS’ exhaust is fruiter and more open than regular M3, with its own stainless steel tailpipes, and sounds the business even at idle.

First impressions continue to be racy. The steering is firm and surprisingly weighty, even when pulling out of the shiny BMW workshop. It immediately feels focused, with taut, tied-down suspension and a performance-profiled in-town ride. M DCT means it is swift and slur-free when moving off and zipping through town. It ticks the ‘special feel’ box right away.

The engine isn’t massively more powerful. It has 10hp more, with 460hp delivered at 6,250rpm. There’s 10 percent more pulling power though, with 442lb ft of torque yours from 4,000-5,380rpm (how delicious that BMW feels the need to be so specific). Launch control and the bite of the tyres give 0-62mph in 3.9 seconds and a standard M Driver’s package raises the top speed limiter to 174mph. The rev limiter is set at 7,600rpm, which is pretty high for a turbocharged 3.0-litre straight-six. 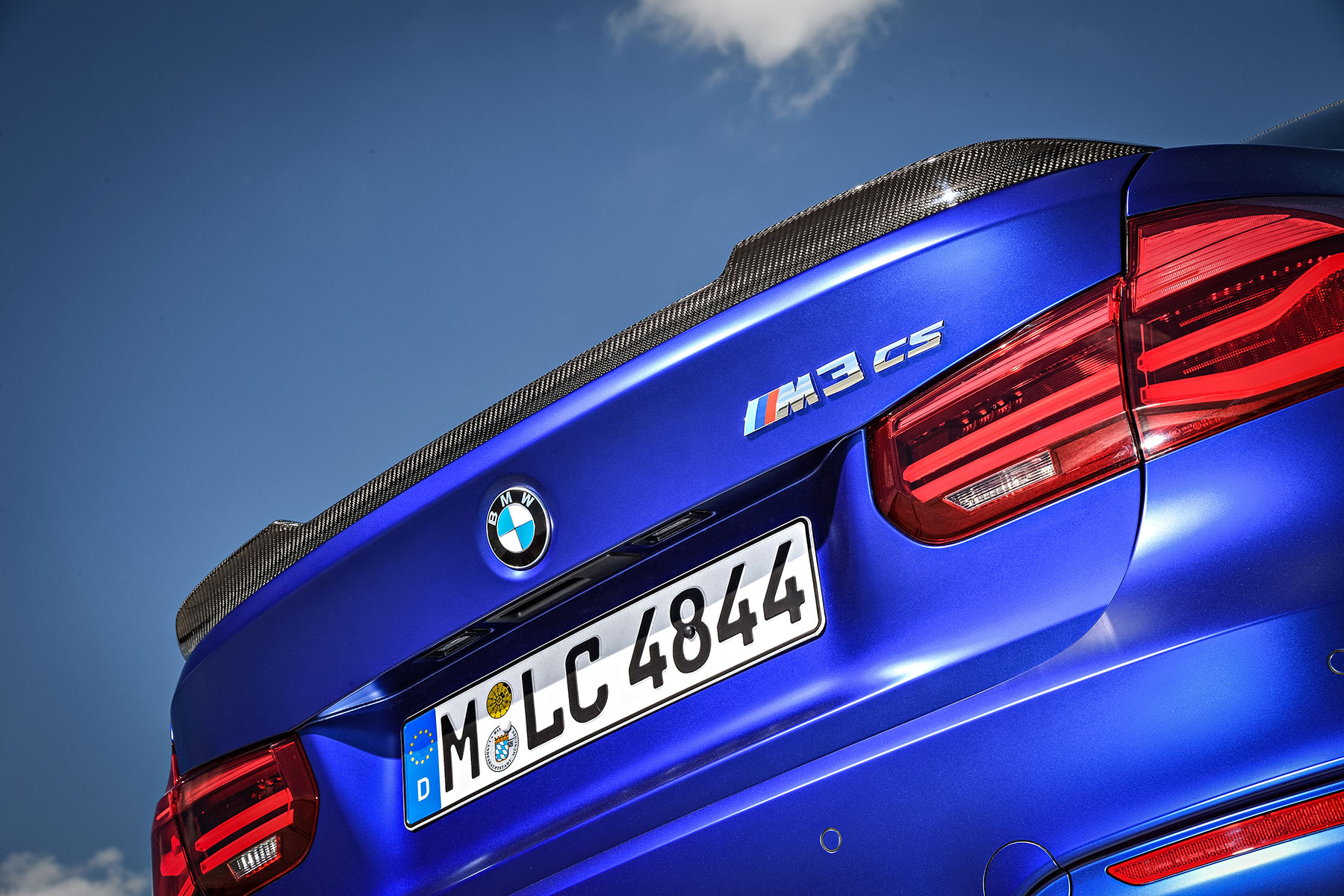 It’s a motor that loves to rev, and sounds magnificent. Adding turbos softened the snarl of early M3, but this brings it back, complete with some authentic resonances and vibrations from the exhausts as it howls over 4,000rpm. Yellow shift lifts in the rev counter flash to signal an upchange, ideally through the paddleshifts, although leaving the seven-speed to do it isn’t the end of the world. Gearchanges are very fast and the sheer intensity of the punch during redline gearshifts is immense – as near to instant shift as you can get in a saloon

No matter what sort of driving you’re doing – even pootling around the city – you’ll love listening to the M3 CS’s engine and, in particular, its exhausts. If you buy a car for the experience, this will feel good even if you don’t drive it to its limits.

There was always a slight nervousness doing this with the original M3. Not anymore. The Cup tyres, along with honed suspension settings, the higher-speed effect of the aero and overall tireless tuning and honing by the BMW M engineers, have created a quite wonderful driver’s car. It’s dialled in and far more purposeful than a normal M3, building upon the excellent work that already went into the updated Competition Package car. 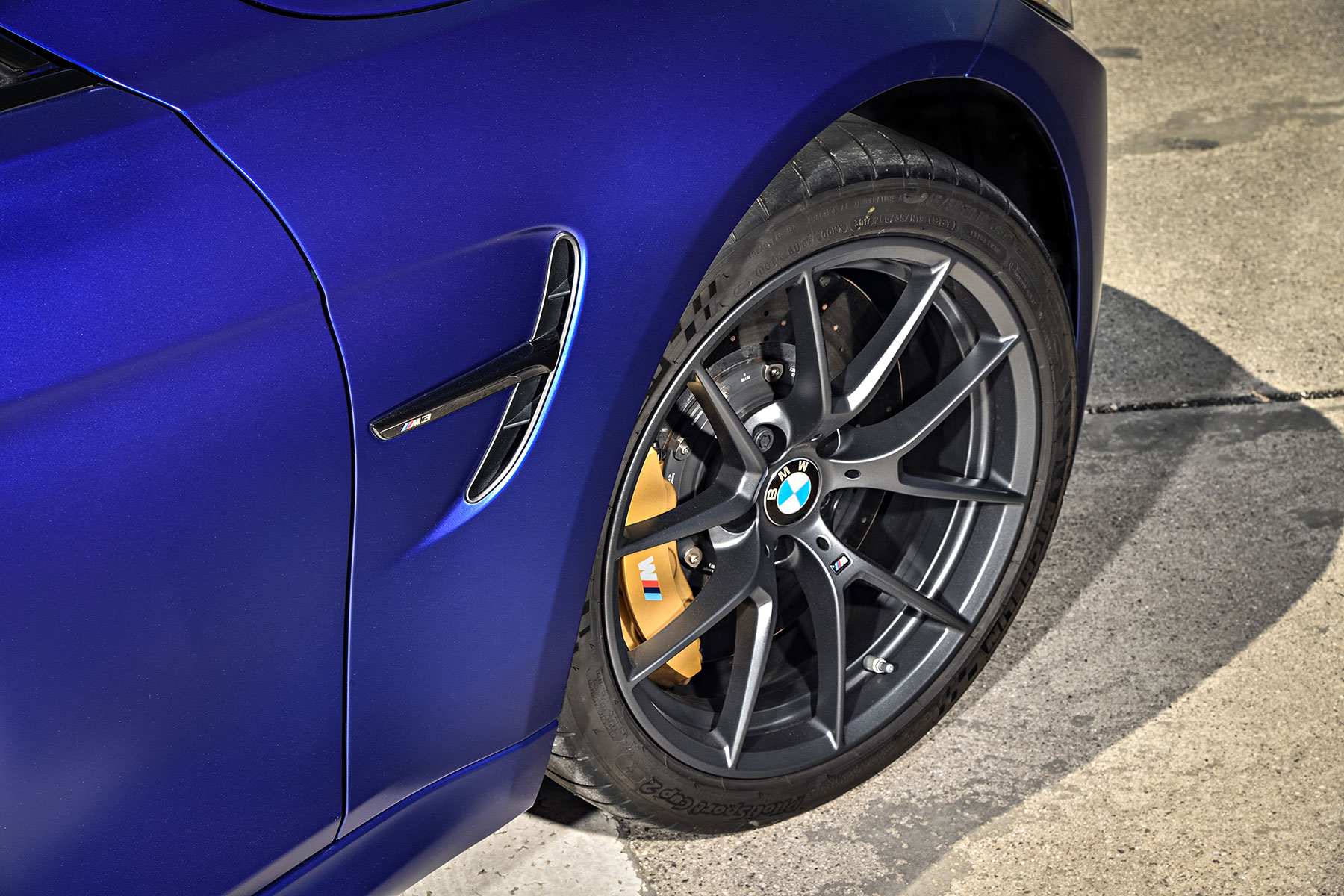 The tyres aren’t brilliant on greasy roads, so you’ll have to be careful there. But, in the dry, they’re exceptional, with tremendous traction and pretty decent feel through the steering. As mentioned, it’s a meaty steering setup, with no soggy slackness and, to further underline its purposefulness, the satisfying feeling of going momentarily light as you pass through the centre from left to right, signalling the tyres’ contact patches are unloaded. The confidence you quickly get from this steering is huge.

Likewise the rest of it. There’s no floaty hesitancy, just a stiffly-suspended ride that results in little roll and lots of connectedness. It’s not harsh either, despite its firmness, so should be purposeful but not daunting on scarred British roads. I liked it best in Sport; Sport Plus is probably too stiff for the road, while Comfort is not really necessary in Germany.

Even on the road, it gives you the confidence to be a bit spicy on the accelerator out of corners, feeling the huge grip from the rear tyres, the precision of the electronic limited-slip differential, even a nudge of power oversteer if you’re really excitable. Choose M Dynamic Mode, or MDM, with the DSC and you can even conduct mild drifts under the security of stability control. I found it a magnificently well-sorted fast-road driver’s car that, at long last, is as special as you’d hope an M3 would be. 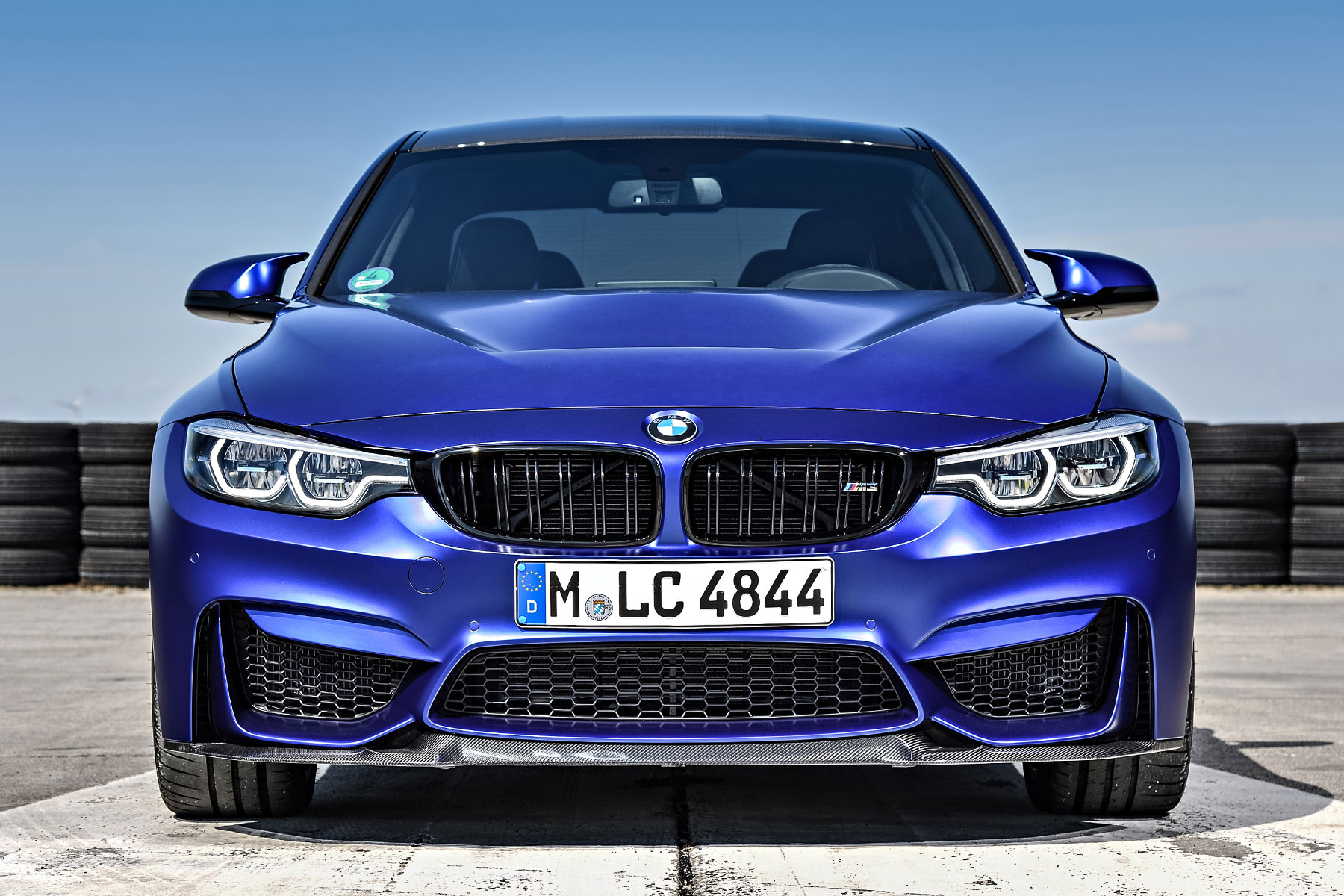 Then we went out on track, and it got better still. First, BMW showed us how powerful and tireless the standard carbon ceramic brakes are: very, meaning the lovely gold calipers and massive-diameter front discs are not just for show. Then, a bit of cone-weaving, to show the front-end bit, and also the clarity with which it finally telegraphs its peel-off into understeer. Such is the lack of lag from the engine, a stab of the accelerator soon corrected this into graceful oversteer. It was supercar-grade stuff.

Out on the higher-speed circuit, the CS came into its own, with a fast, efficient, feedback-filled performance. Its limits, once again, thanks to the tyres, are extremely high, but you have the confidence to quickly approach them, even spend a few laps going over them, to the chagrin of the instructor in the lead car but not to your own heartrate. Do some of this in the first F80 M3 and you’d be having kittens.

I managed to grab an extra session of fast lapping in the M3 CS, engine howling, gearbox punching, tyres biting, suspension keying me into the road surface and brakes never failing to shed 150km/h with absolute authority. Special mention to the sheer stability of the car under heavy braking, too – braking into bends was child’s play. 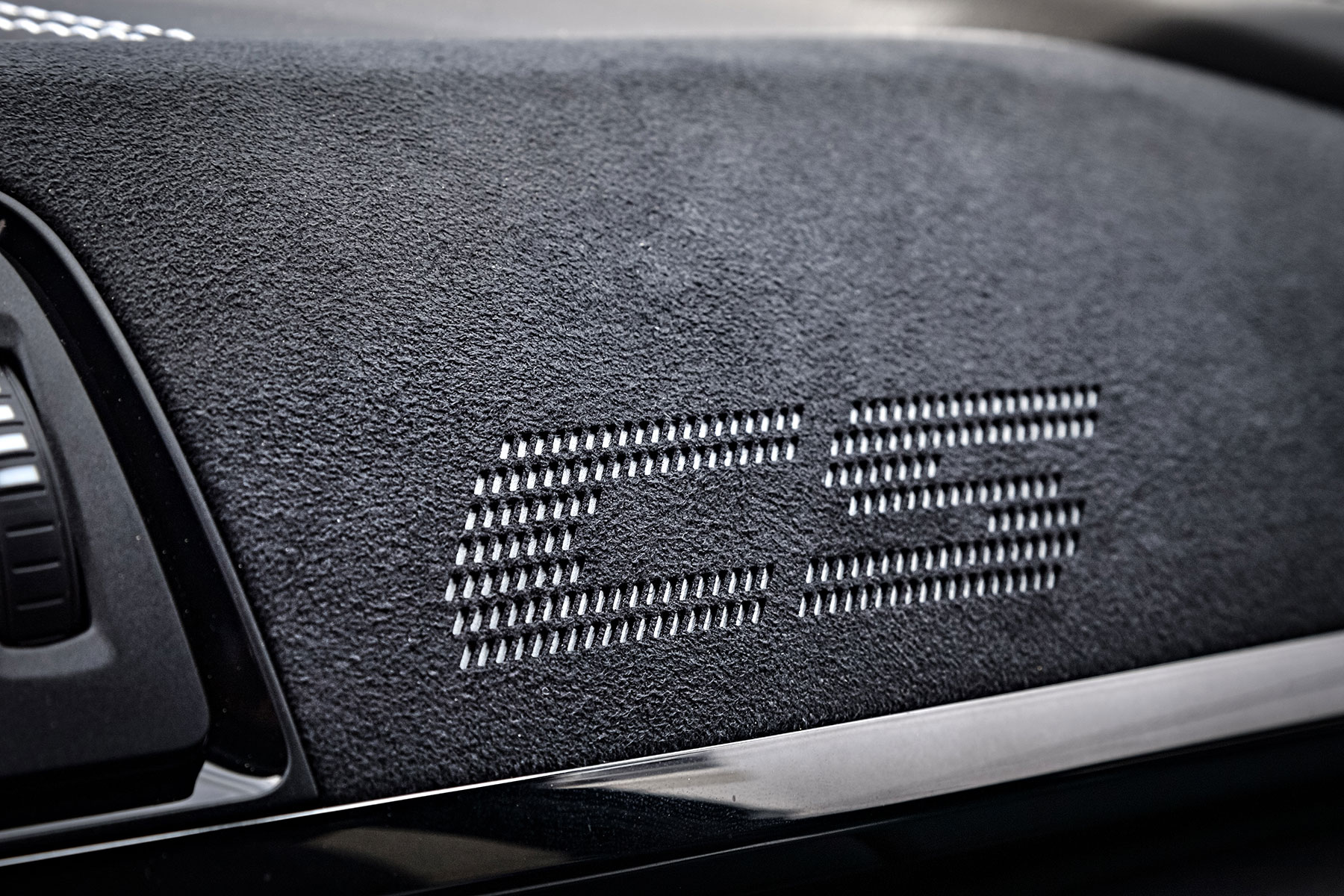 It was a phenomenally thrilling session in a seriously well-sorted performance car. The BMW M3 CS is almost perfect. What a pity it couldn’t have been like this from the start.

You sense BMW had a point to prove with the M3 CS. If this really is the end of the line for the M3, it didn’t want it to depart with a reputation as an almost but not quite car. Cue the CS, one of the best M3s in decades. It’s exceptionally exciting, a top-notch sports car that’s been developed by experts. Their signatures are all over it.

The current M3 has thus signed off in style. What the future holds, who knows. That’s a job for the product planners. But if and when they do start work on a new M3, using the BMW M3 CS as a starting point would be no bad thing. It’s an M3 great, full stop.