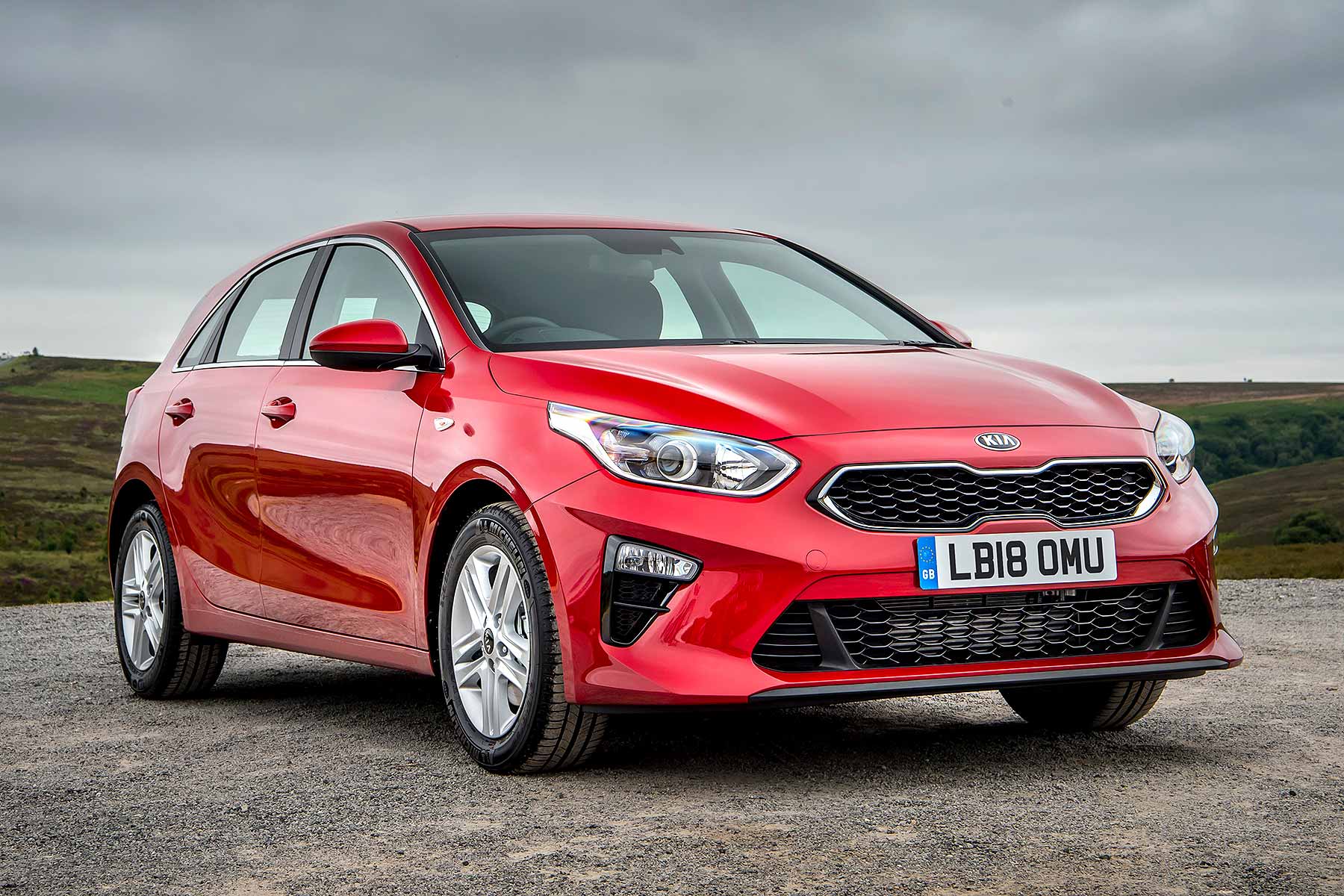 Kia has sold 1.3 million Ceeds since the car was first introduced in late 2006. These days, the firm’s best-selling car is the (higher-priced) Sportage SUV, but the Ceed family hatch is still an important model, and Kia wants this third-generation car to sell even better than its – rather forgettable – predecessor.

A few months ago, I sat next to Kia’s European Head of Design, Gregory Guillaume. There’s been a big evolution in design principles for this Ceed, he explained. The old car’s ‘cab-forward’ look is traded for a better-balanced style with a longer bonnet, stronger and flatter shoulders, and a smoother side profile. The visual ‘noise’ of the current car is toned down, with cleaner lines and a more premium appearance.

You sense Kia wants to edge upmarket, and be more Volkswagen Golf-like to rival the top-selling VW. To be a more compelling alternative to the Sportage in showrooms, too.

On sale from 1 August (with prices starting from £18,295), Kia is launching the 2018 Ceed with three engines – two downsized petrols and an all-new turbodiesel. There are four trim levels (‘2’ and ‘3’ are core, Blue Edition and First Edition are specials), plus the promise of more variants to come.

It’s quite the time to launch a new family hatchback: Ford is preparing to roll out the new Focus and, according to our first drive, it’s an exceptional new competitor. The new Ceed needs to be good if it’s to stand a chance of boosting Kia’s fortunes in this sector.

To Slovakia, then, and the factory that builds the Ceed, to find out what it’s like. 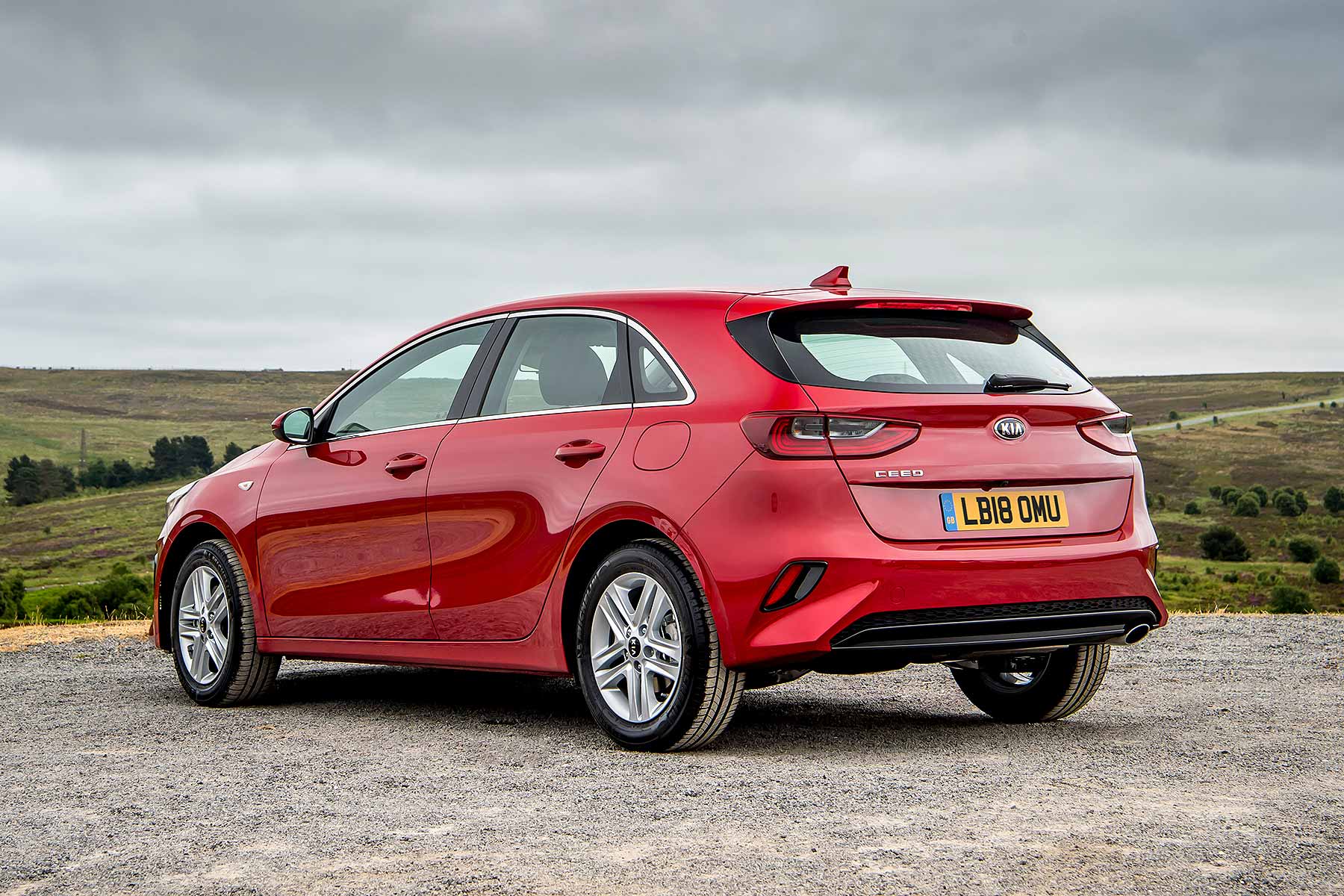 Its new proportions suit the Kia Ceed well. It appears longer, lower, wider and more substantial. The exterior has a high-quality appearance and even the entry-level ‘2’ grade has a classy look, thanks to its chrome window surrounds and a rich paint finish.

Add the bolder, more horizontal shoulder-line and here’s a hint of current-generation Mercedes-Benz A-Class to it, although the Ceed is the prettier of the two. 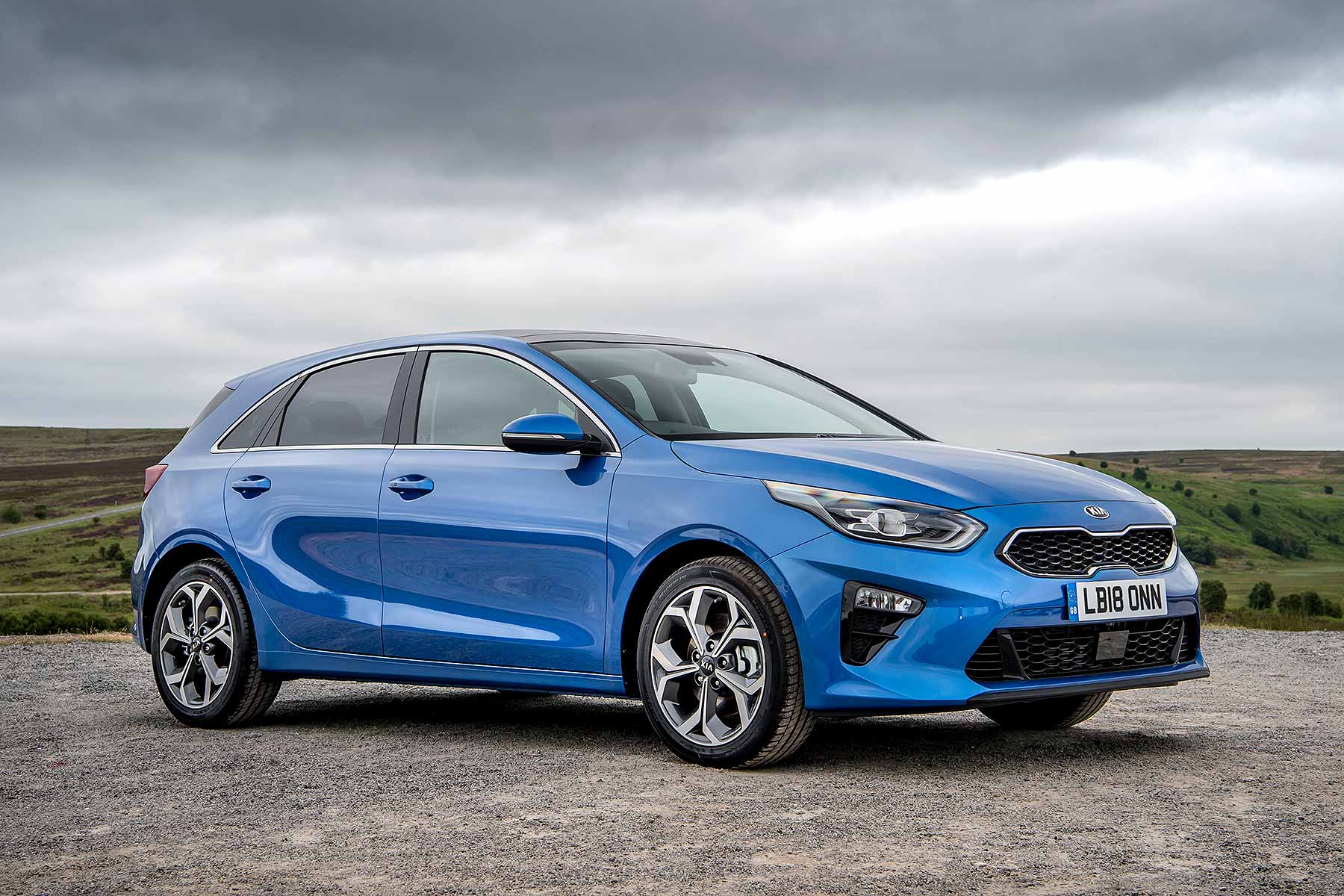 The new Blue Flame colour option is particularly appealing. It’s such a pretty colour, Kia has named a special launch edition after it. There’s a total of seven paint options, not as many as rivals, but presumably more will come as production ramps up. Same with alloy wheels: right now, there are two – a regular 16-inch wheel or a 17-inch diamond-cut design.

The headlights now contain integrated LED running lights – the four square ‘ice-cube’ design from the earlier GT-Line models. Standard on all, they’re very distinctive and give the Ceed a purposeful look on the road. They also mimic the LED running lights of current Porsches, which is no bad thing. 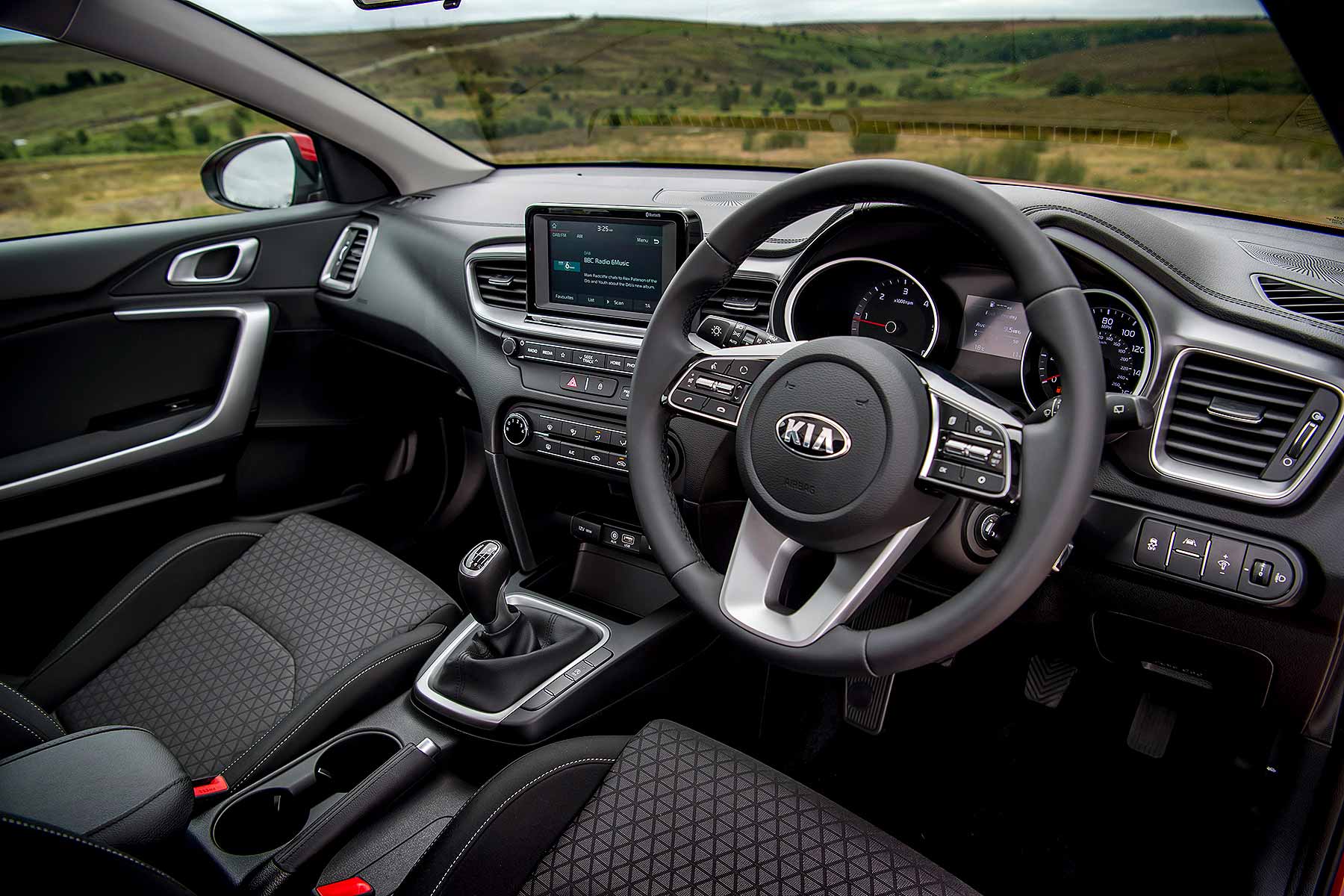 Kia interiors are nice enough, but can be just a teeny bit generic and forgettable. The Ceed is better here, and has some nice details such as the cowled dials, a higher-grade sports steering wheel (leather even on base models) and polished metal-look (plastic) trim. The wrap-around stitched-effect dash top is smart, and it all looks and feels more grown-up than the old one.

Quality and tactility are better than before (actually, better than the current Sportage), and switching the infotainment system to a freestanding screen gives it a more modern appearance. Indeed, it’s an excellent set-up with crisp graphics and both Apple CarPlay and Android Auto as standard.

Entry-level ‘2’ models get a seven-inch display, all the others have an eight-inch screen with sat nav. First Edition cars have wireless smartphone charging. 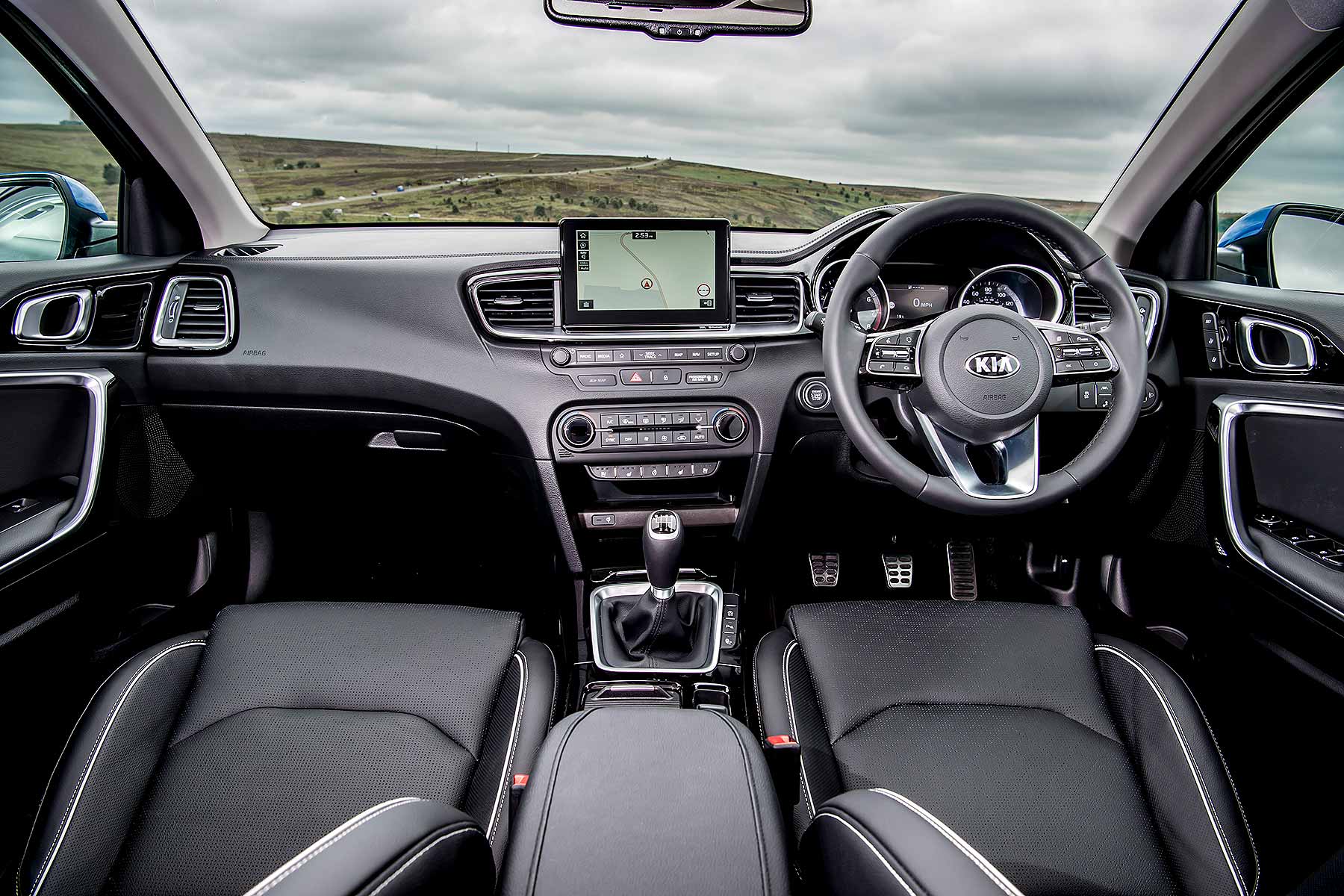 Naturally, the controls are laid out perfectly – this is Kia, remember. Purists will like how the dashboard is angled slightly towards the driver, and that the seat (firm, well-shaped, nicely bolstered) now drops down lower.

Visibility is better than before and a sense you’re sitting more centrally in the car, rather than being shoved forwards, makes it seem more sensible. 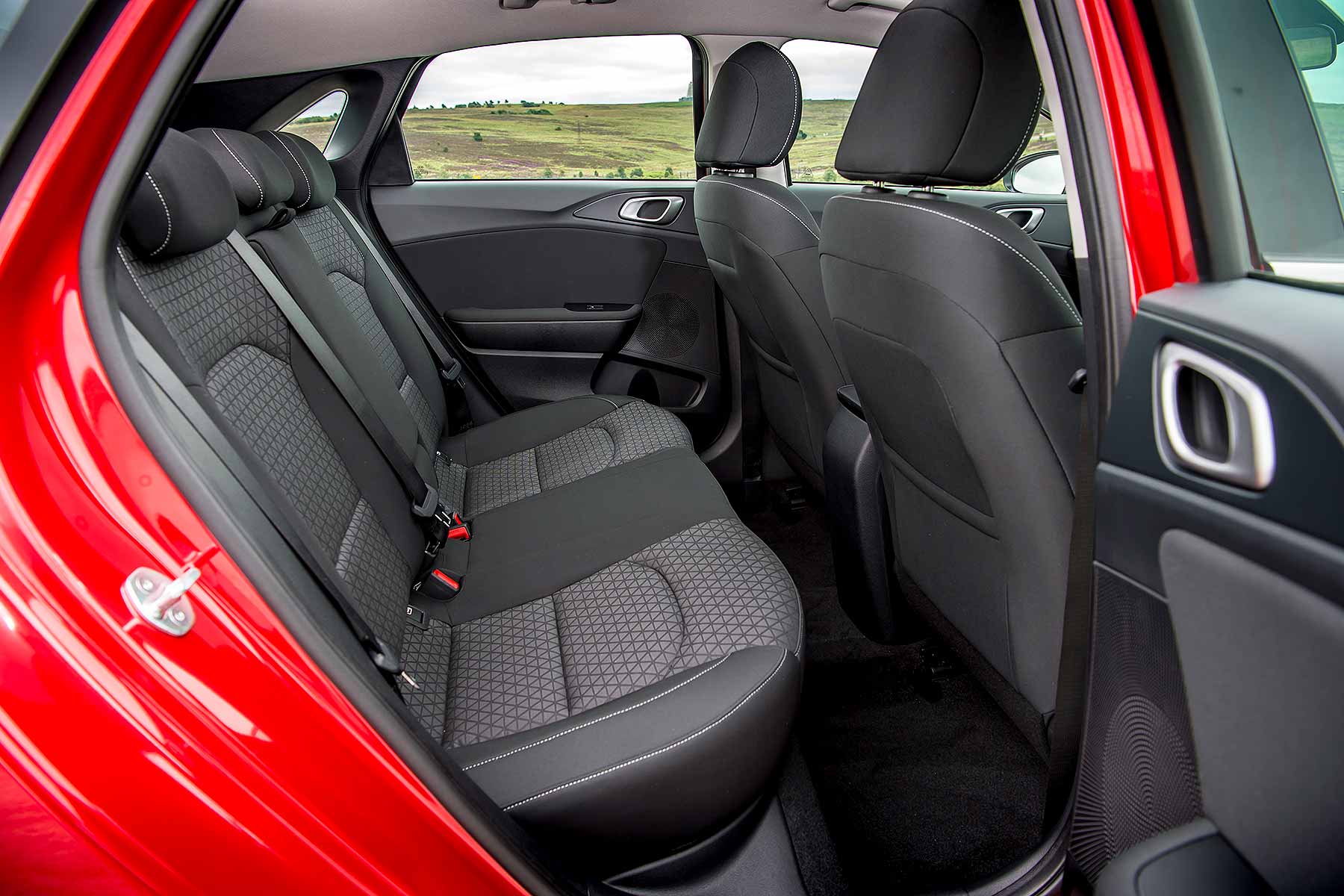 There are no surprises in the rear either. Drivers can sit behind themselves without feeling too squashed, and the rear bench seat is supportive. It feels wider and more spacious – kids will be fine back there. The boot’s a voluminous 395 litres, near the top of the class for space, and folding the seats extends it to 1,291 litres. 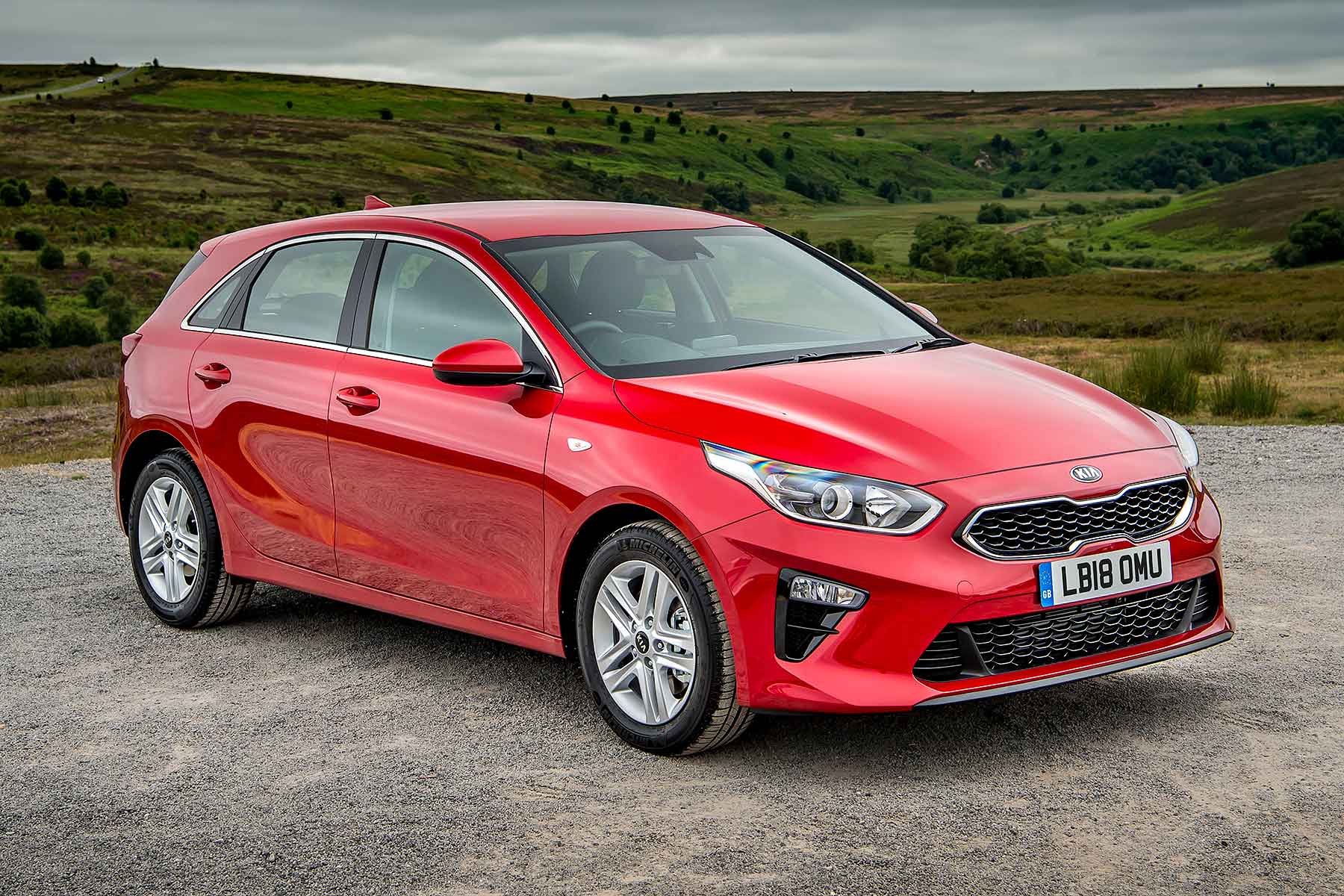 Refinement is the new 2018 Kia Ceed’s trump card. From the first turn of the key, when the diesel engine smoothly fires up and settles to a remote idle, this feels a more hushed and plush car than before. The impression continues as you drive away; the ride has a cushioned pliancy and the engine remains muted.

Gather speed, and both wind and road noise remain remarkably low. It’s like a car from a class or two above at a 40-50mph cruise. Even at motorway speeds, things don’t become too disturbed. Keep the revs below around 2,500rpm – the torquey engine can take it – and it stays in the background. The generic diesel clatter is only roused from around 3,000rpm. 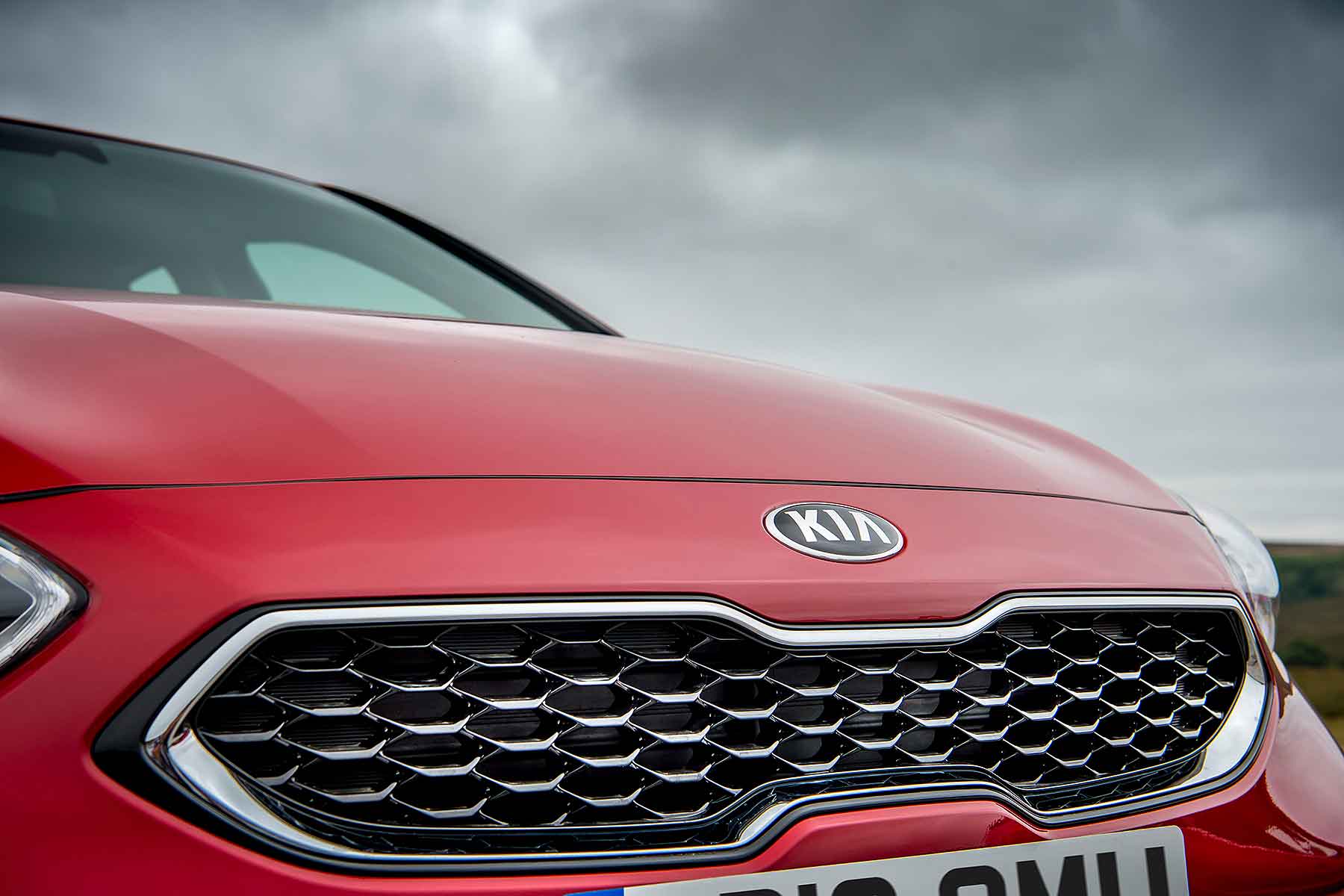 All this is a pleasant surprise that will really impress current Cee’d owners (note the change in punctuation versus the old car) – and maybe a few Volkswagen Golf drivers as well. The Ceed’s six-speed gearbox is clean and easy, as is the clutch, and the brakes offer powerful assurance. You only get an electronic parking brake on top-line First Edition models, but the regular handbrake isn’t too heavy.

Ride, as mentioned, is controlled, and it soaks up uneven surfaces in a settled way at speed. There was some surface patter from the ‘eco’ 16-inch tyres of the test 1.6-litre CRDi, though. If the road itself looked like it had seen better days, the ride can get excitable and bobbly. 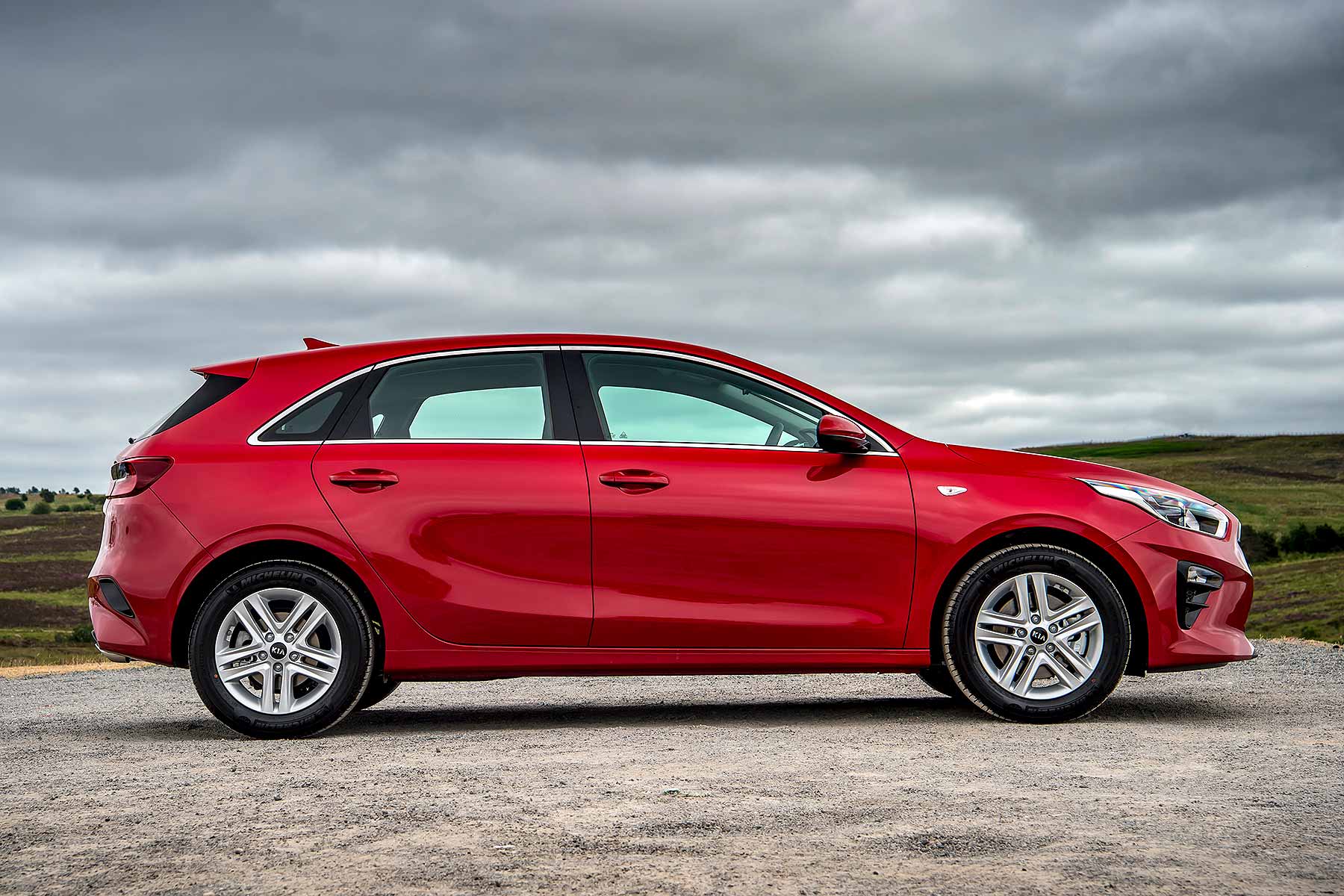 Kia is one of the few manufacturers to fit high-spec independent rear suspension to all its mid-size hatchbacks, not just the expensive and powerful ones. The benefit is assurance and depth to the handling. Corners are taken confidently, with a sense that the rear wheels are helping out rather than grimly hanging on, and even this entry-level diesel can be chucked around with surprising vigour without exposing its limits. Firm, well-weighted steering helps here.

Although the 1.6-litre engine is torquey, pulling from improbably low revs without judder or drone, it’s not particularly fast. A total of 206lb ft of torque (yours between 1,500-2,750rpm) isn’t a huge figure for a 1,388kg car, and there were times during the hilly Slovakian test route that it felt a bit lacking. Overall, it’s adequate, rather than surging.

It does, however, return 74.3mpg in eco-pack guise; this one gets ISG stop-start, a lower ride height and those fuel-saving tyres. The CRDi diesel also now has Selective Catalytic Reduction (SCR) as standard, a urea-injecting system that virtually eradicates all NOx emissions.

The 1.4-litre turbo will be the retail best-seller. It produces 140hp and a healthy 178lb ft of torque. It too is serene at low speed, with a little bit of a growl and throb from the exhaust, although it does get gruff when worked hard.

It’s almost as strong as the diesel at low revs but does its best over 3,000rpm, when power starts to take over. It has a verve lacking in the diesel, feeling faster than the quoted 0-62mph in 8.9 seconds suggests.

Running on larger 17-inch wheels and Michelin Pilot Sport 4 tyres, the 1.4 T-GDI First Edition handles even better than the diesel. It’s a bit more resolved, with more bite and grip. The ride can still be jiggly, there’s less of a stiff edge to it than the eco-tyre’d diesel.

The latest Kia Ceed is a smart, nicely honed, more well-rounded car that delivers a high level of refinement, quality and overall integrity for prices that still look excellent value alongside the competition (when you do the sums, the advantage will have you double-checking them).

It’s hard to fault how it drives, and the more premium appearance should better position it alongside the Volkswagen Golf.

Kia admits the Ceed may only comprise 10 percent of its UK sales, whereas the Sportage takes four in 10. Other manufacturers sell many more family hatchbacks than this, but Kia’s happy with that at the moment.

There’s more coming for the Ceed, including GT and GT-Line models (for the former, think Hyundai i30 N – and we know how good that is). We’ve certainly seen enough here to think Kia has a very able platform to build from.

Jeremy Clarkson pays more than £100,000 to producer he punched in ‘fracas’

All the hottest muscle from Mecum Harrisburg

The hotly-anticipated Mecum Harrisburg auction will feature some of the most coveted classic muscle cars on earth. From RS/SS Camaros through 427 Galaxies to...
Read more

Ranked: classic hot hatches that have rocketed in value

We asked Hagerty for a list of the hot hatches that have skyrocketed in value over recent years. Here’s what they told us
Read more

How far do the most popular electric cars REALLY go on a charge?

The real-world range of popular electric cars has been tested in... the real world, including range and what happens when they 'die'
Read more