Although it's not particularly ground-breaking, we think the Hyundai Ioniq has been launched at exactly the right time 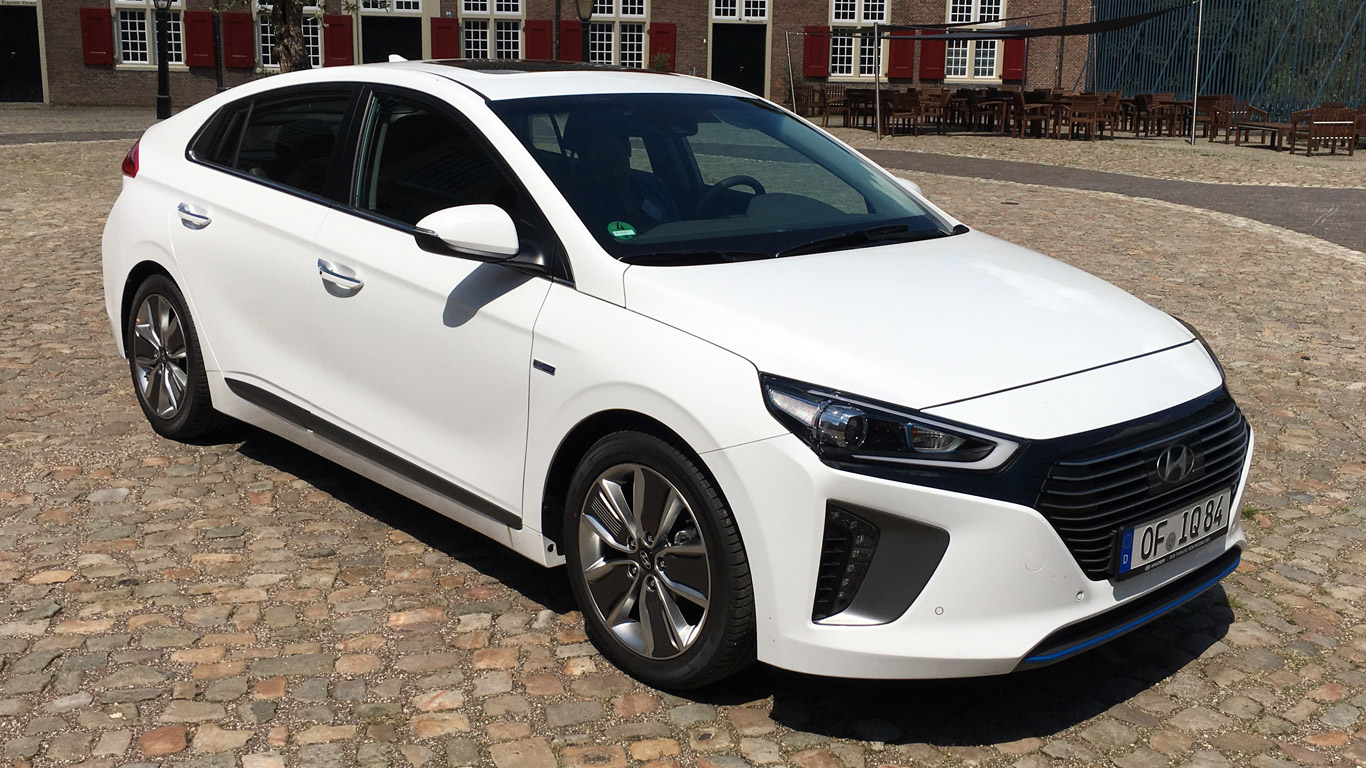 Hyundai has done something very clever. It’s jumped on the anti-diesel sentiment currently being felt across the car industry, launched an eco-friendly car that caters for all people (in hybrid, plug-in hybrid and fully-electric guises) and offered it at a very reasonable price. The question is, should you buy one over its obvious rival, the Toyota Prius?

We touched on the price. It starts at £19,995 for the hybrid model in entry-level SE guise. That’s more than £3,000 less than the Prius, and a smidgen more affordable than the cheapest diesel Volkswagen Golf. Suddenly futuristic tech is within reach of the everyday company car driver, or private family buyer.

What about the other models?

The fully-electric version starts at £28,995 in Premium trim – that’s before the plug-in car grant, potentially saving you £4,500 and bringing it close to the popular Nissan Leaf. 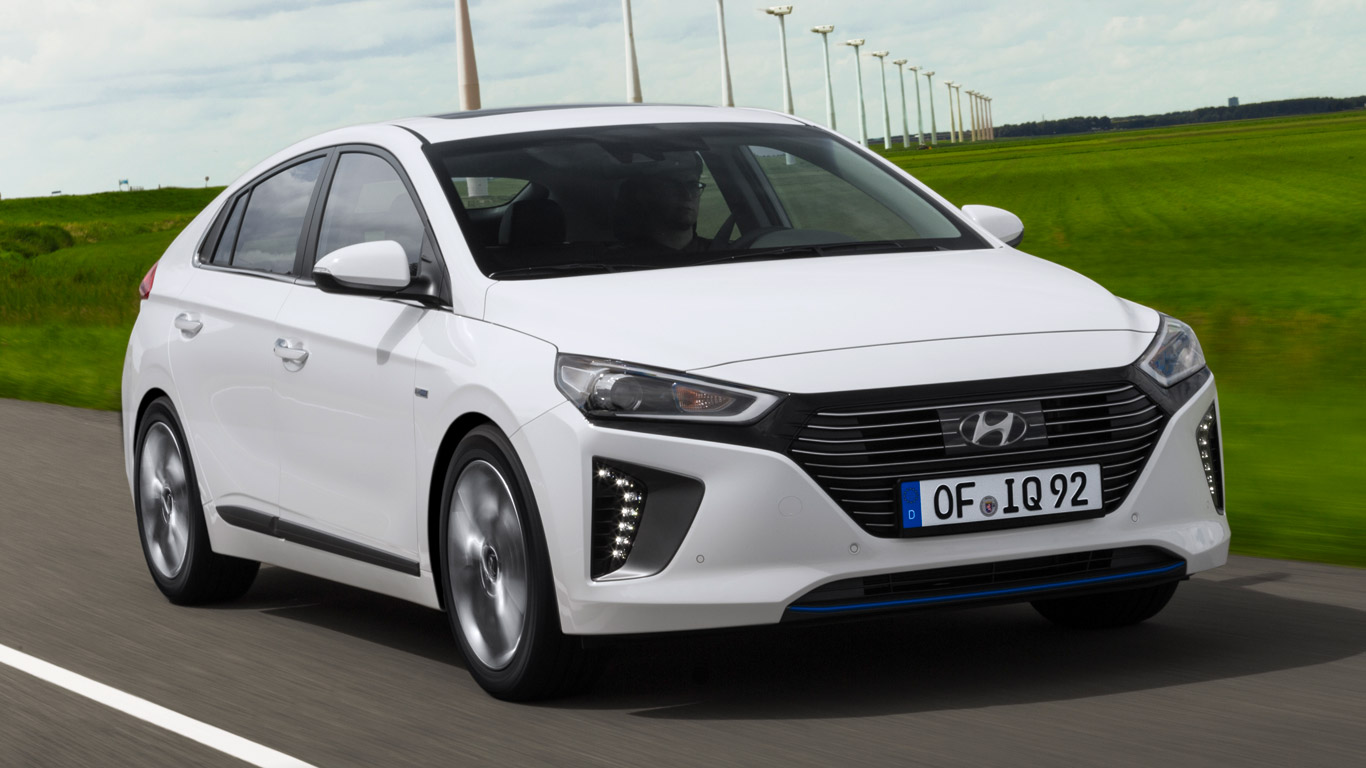 We don’t mean this in a bad way, but unlike many futuristic electric cars, the Hyundai Ioniq feels very normal to drive. That means you don’t have to be an early-adopter making a statement to buy one. Anyone who wants to switch out of a diesel Golf should feel comfortable driving it.

The electric version is more convincing than the hybrid

In reality, most buyers will opt for the hybrid (or plug-in hybrid, due to follow in 2017) as range-anxiety will influence their buying decision. But we say, if you’re prepared to take the leap, and don’t regularly trek across the country, do it properly and opt for the electric version. It’s a more enjoyable experience without the noisy petrol engine kicking in when you give it the beans, and it’s surprisingly fun in a ‘futuristic spaceship’ kinda way.

So, the killer question: how far will the electric Hyundai Ioniq travel on a charge? The answer is a claimed 174 miles. Even allowing for an element of ‘real life’, how often do you complete journeys longer than that? And when you do, the UK motorway network is now covered with fast chargers at service stations. 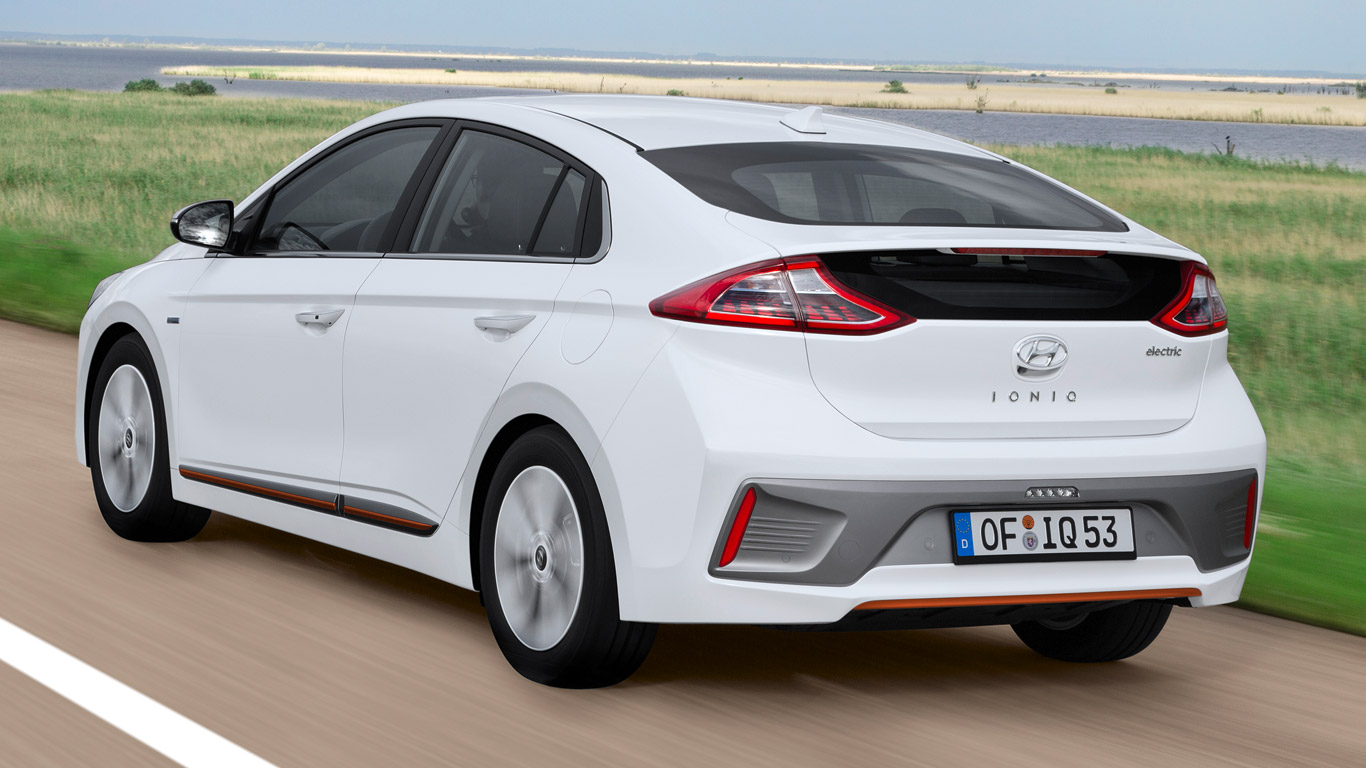 We’re used to electric cars featuring regenerative braking – essentially, it captures the car’s kinetic energy and pumps it back into the battery when you’re slowing down. But the electric Ioniq allows you to ramp up the regen using paddles behind the steering wheel – similar to the Outlander PHEV. On maximum ‘stage-three’ regen, you can practically drive around town without using the brakes.

Of course, all eco-friendly cars are designed with aerodynamics in mind, but the Ioniq’s drag coefficient of 0.24 Cd is genuinely impressive. It’s gone a step further than simply being a sleek shape – we’re talking an active air flap in the grille of the hybrid and plug-in hybrid model, while all versions come with a rear spoiler and diffuser, as well as a sleek underbody cover.

Tell me about the hybrid Ioniq

The hybrid Ioniq combines a 105hp 1.6-litre petrol engine with an electric motor producing 43.5hp. It’ll hit 0-62mph in 10.8 seconds, while drive in a sensible manner and you’ll see 83.1mpg. That’s as long as you don’t get carried away with the Sport mode…

Yes, it has a Sport mode 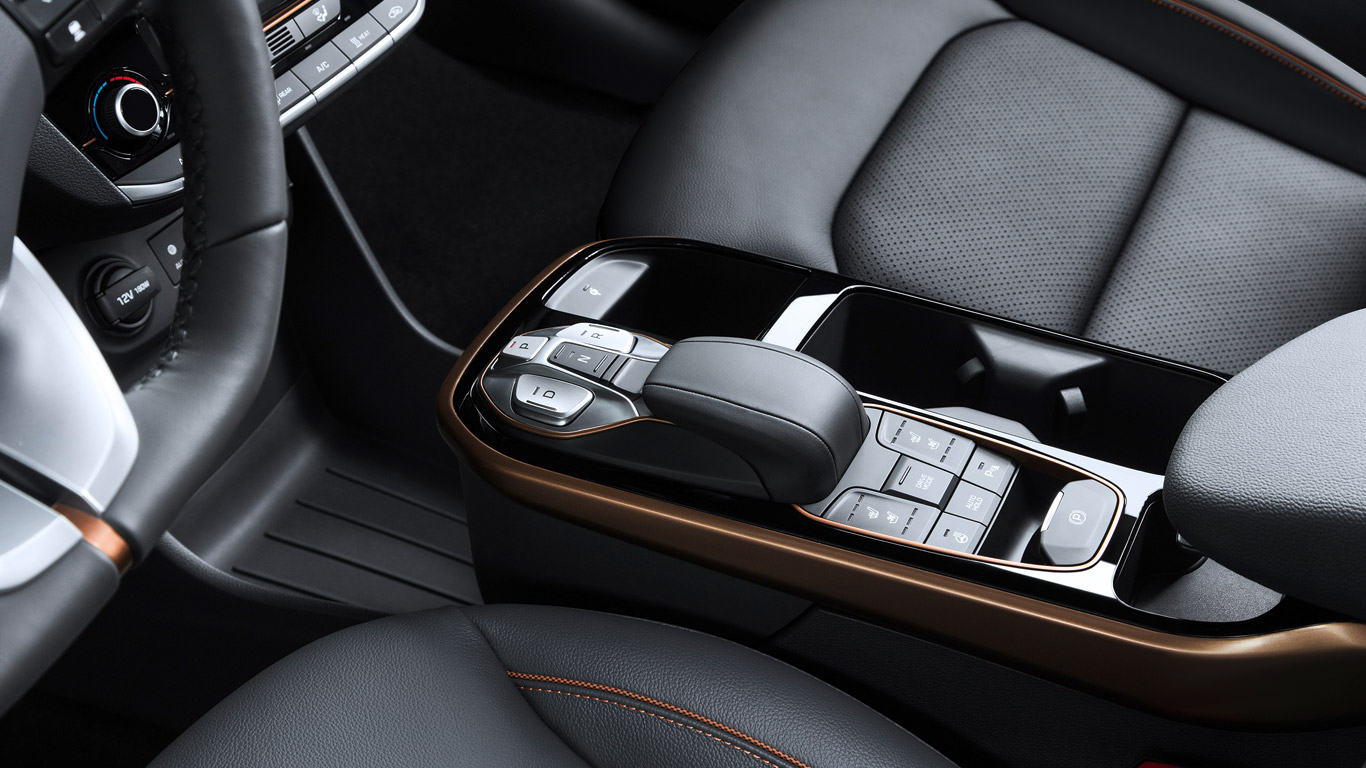 You won’t find one of these in a Prius: the Hyundai Ioniq features a Sport mode, which holds onto gears for longer, changes the colours of the dials and makes the steering heavier. OK, it’s a teeny bit pointless, but it’s fun. Hyundai is marketing the Ioniq has a car that’s fun to drive. It’s no sports car, but it’s certainly not as painful for enthusiastic drivers as many hybrids.

If you do drive enthusiastically, you’ll notice a lot of body-roll in the hybrid model. The electric version seems tighter, somehow – presumably those heavy batteries located low down help lower the centre of gravity. Indeed, the Ioniq has a lower centre of gravity than a Mk7 Golf GTI.

It’s got a proper gearbox

There’s a tendency for manufacturers to use CVT transmissions in hybrid cars – they’re both cheaper and an easier way to reduce CO2 emissions. But Hyundai UK CEO Tony Whitehorn told us ‘driveability was more important’, so the Ioniq comes with a six-speed dual clutch transmission. It’s fast to respond, although you’ll be disappointed if you’re expecting racing-car-style paddles for gear changing…

Talk to me about emissions 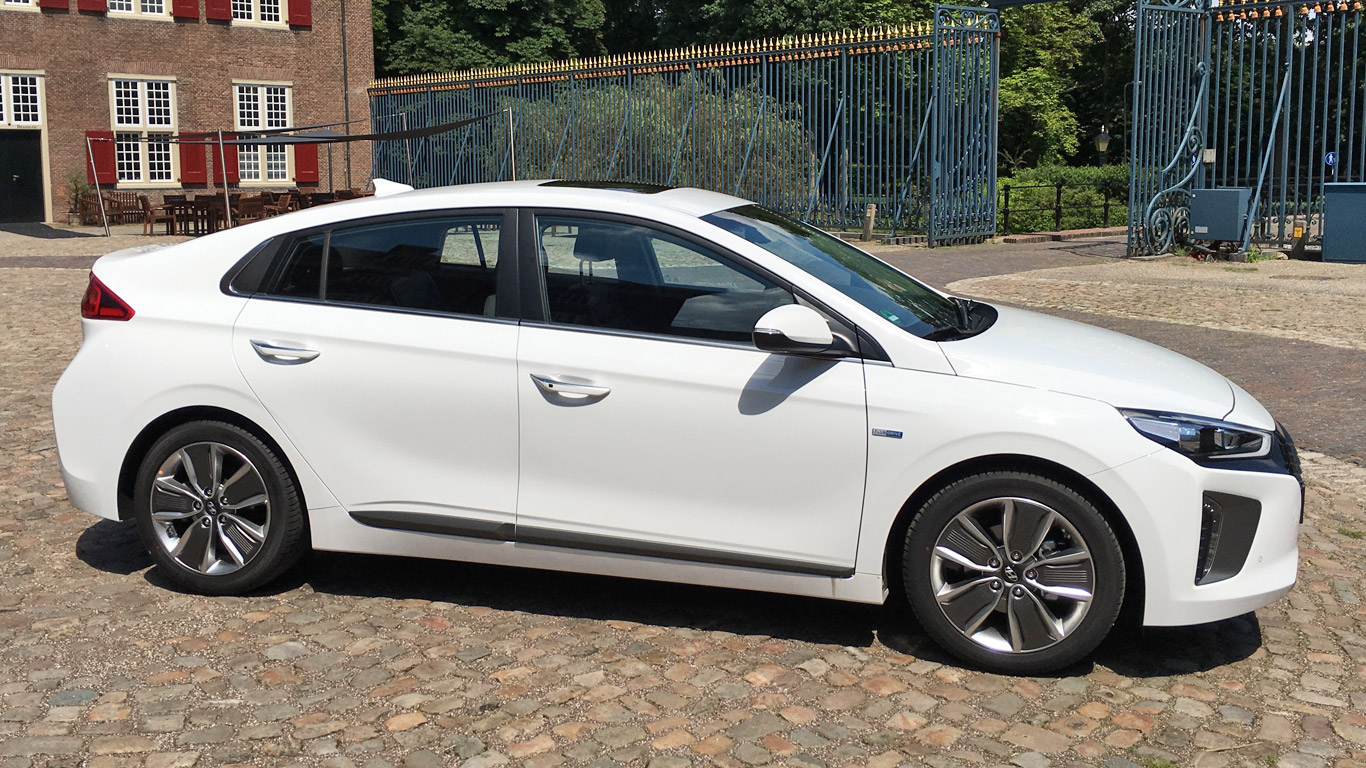 The hybrid Ioniq officially emits 79g/km CO2, meaning it won’t cost you anything in road tax, while company car users will benefit from its 15% BIK band. At 70g/km, the Prius is marginally better, meaning it’ll cost slightly less in company car tax. The Prius will qualify for London congestion charge exemption, too – for now.

The interior is fairly normal

Just like the driving experience, the Ioniq’s interior is relatively normal (in both hybrid and electric guises). It’s certainly not premium, but standard specification is good, with DAB radio, cruise control and a rear-view camera standard on the entry-level model.

Despite feeling relatively normal, the interior of the Ioniq is rather friendly towards the environment. The headlining and carpet use materials extracted from sugar cane, for example, while the interior door covers are made of natural plastic combined with powdered wood and volcanic stone. Again, you can’t really tell… in a good way. 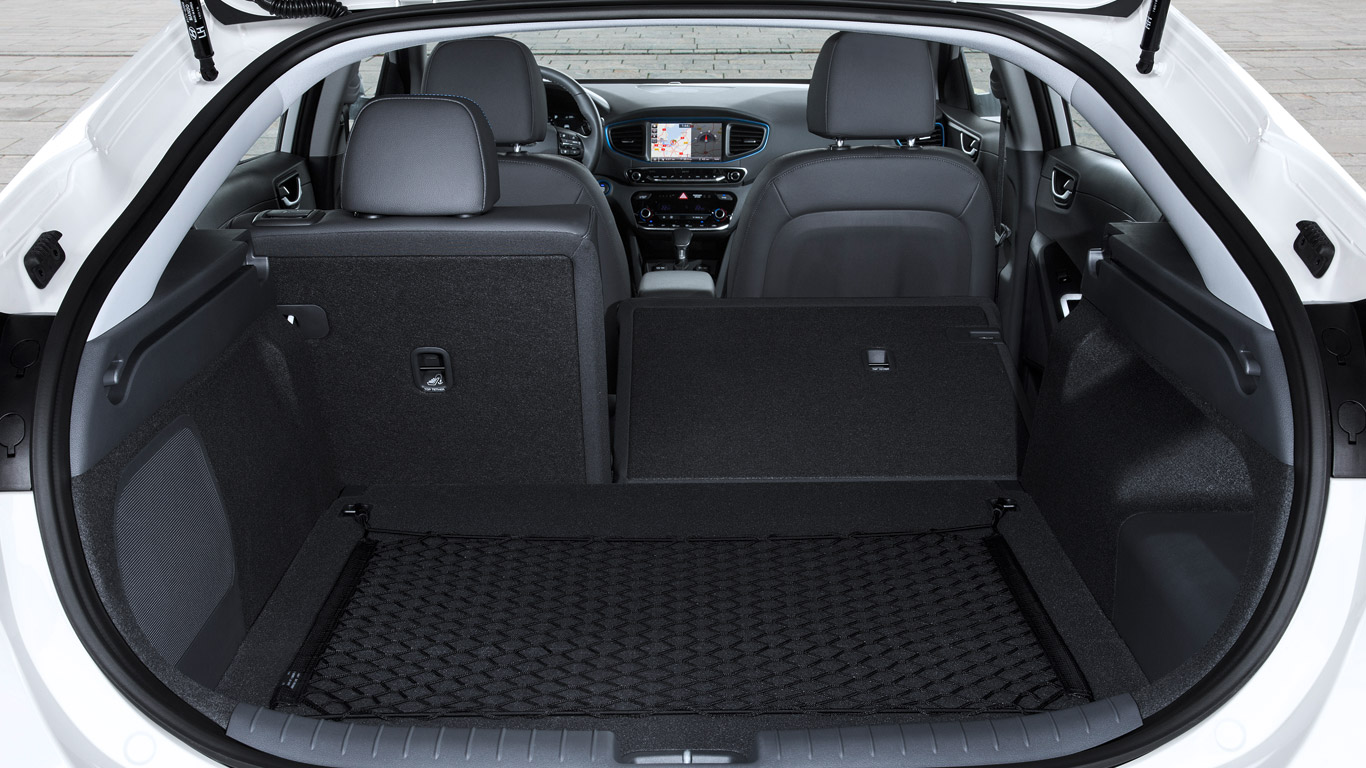 In the Uber age, it’s crucial that cars like the Prius and Ioniq are just as pleasant for rear-seat passengers as the driver. The cabin has an airy feeling, with plenty of room for adults in the rear.

What about the boot?

By hiding the batteries under the boot floor in the hybrid Ioniq, luggage space is fairly impressive – at 550 litres. That’s bigger than the Toyota Prius, although it does seem on the shallow side compared to conventional rivals.

So, should I buy one?

It’s very convincing, the Hyundai Ioniq. It’s not hugely ground-breaking… most of the tech we’ve seen before, but it’s a very complete package offered at the right price at the right time. We suspect Hyundai’s onto a winner.

The Lister LFT-C is a modified Jaguar F-Type with 666bhp, a 205mph top speed and a roaring V8 that makes a Lamborghini sound subdued.
Read more

Beige against the machine: the least popular car colours revealed

MG has received 800 expressions of interest for its ZS EV, which will debut at the London Motor Show ahead of going on sale in September 2019.
Read more