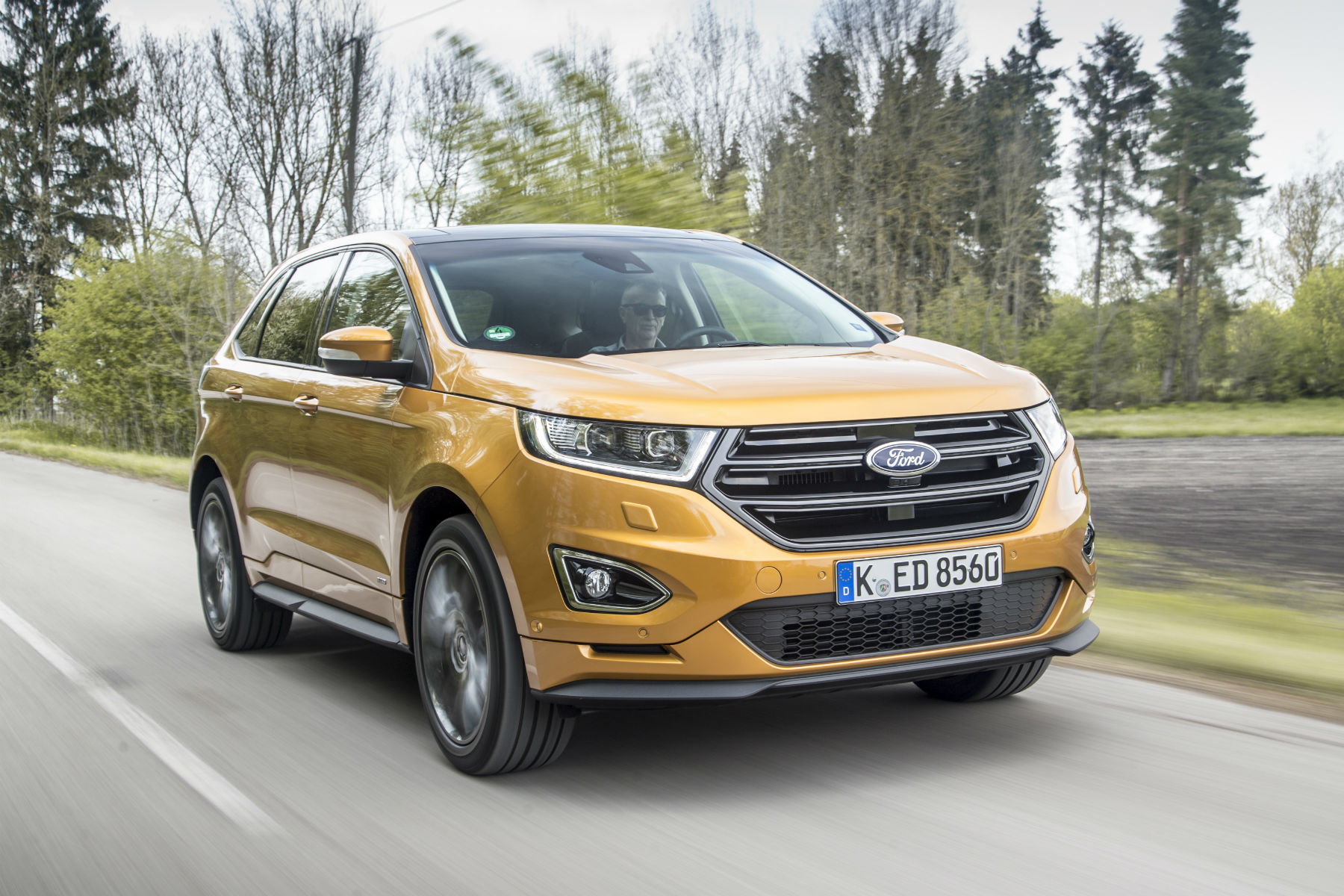 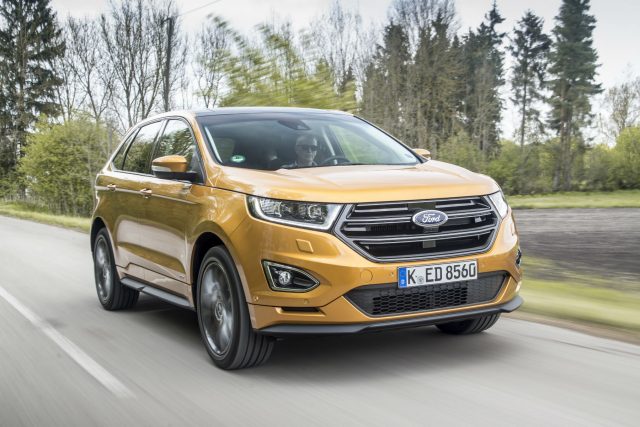 Ford will already happily sell you a couple of SUVs, the Indian-built EcoSport and the somewhat nicer Kuga. If you thought that covered the bases of what Ford might reasonably achieve, you’ve overlooked an important point. Ford wants a slice of the Audi Q5’s pie. Ambitious? Maybe.

More reasonably, there are other contenders here: notably the Koreans in the shape of the Hyundai Santa Fe and the Kia Sorento. Ford’s Edge may lack their seven seats, but it’s a tougher, broader-shouldered beast that packs its American-inspired punch rather impressively.

The Edge comes to the UK from North America, which, with the high profile of the new Mustang, gives it some leverage. Ford needs to expand its SUV range in Europe. The outstanding success of these vehicles means they now account for a quarter of all new cars sold, and their popularity keeps on climbing.

So what you get here is a £30k-£40k five-seater that’s big as a Volkswagen Touareg, but hides its bulk in a more elegantly styled body. Space is a key selling point – there’s lots of it – but so too is the fact that the Edge is a fully committed 4×4.

You are buying into the off-road image here, so there are no namby-pamby front-wheel-drive models to save a couple of thousand on the purchase price, and a few grams of CO2 to the atmosphere. 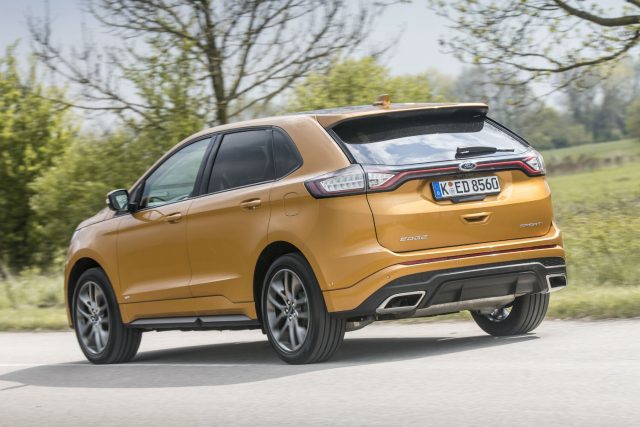 Do you even care about driving off-road?

The statistics say it’s unlikely you do, but the Edge has the ability to make you feel good if you need to tackle a wet field or sandy track. It does that mild off-road thing with confidence, although as soon as it gets bumpy you’ll get shaken and stirred inside the cabin and want to head for some smooth Tarmac.

The Edge is really about comfortable cruising, with the extra reassurance of all-wheel-drive, or AWD as Ford calls it. Most of the time, most of power is directed to the front wheels, with rear-wheel drive jumping in only when it’s needed.

That’s the way of the world with SUVs and crossovers these days, because only driving two wheels reduces fuel consumption and CO2. 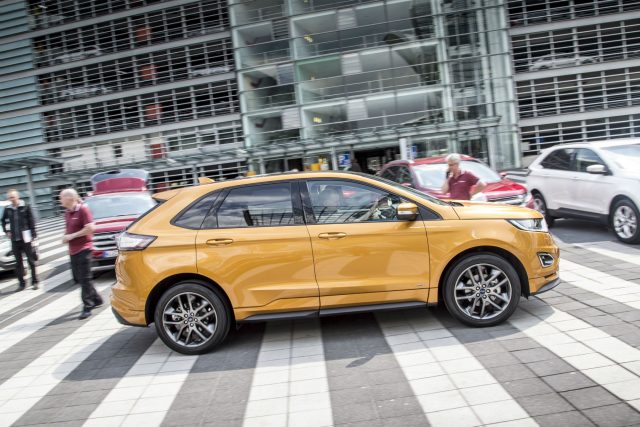 So this Ford Edge is clean and green?

Well, sort of. If ultra-low CO2 is important to you, the Edge counts itself out. With the numbers only just nudging under 150g/km, it may be average for a 4×4 of this size, but it’s some way up the company car benefits scale.

The economy, inextricably linked to CO2, is around 48mpg for manual and automatic, according to the daft statutory tests. Reckon on 40mpg on a good day and you won’t be disappointed. 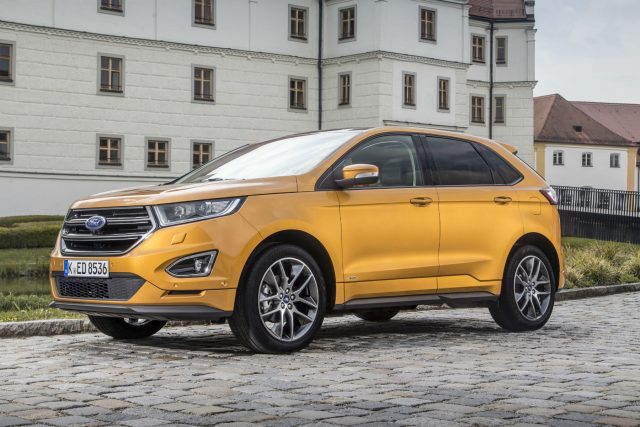 Why no choice of engines?

The power is from a diesel, obviously. You can’t sell a car like this with a petrol engine unless it has a Porsche or Range Rover badge. It’s a 2.0-litre with plenty of oomph: 180hp with the manual gearbox, 210hp if you opt for the six-speed auto.

The car’s weight – just shy of two tonnes – precludes a smaller diesel, and Ford doesn’t have anything bigger in its stable. But that really shouldn’t worry you. Today, performance is all about tuning smaller engines, rather than using the large capacity lumps of yesterday.

The Edge performs satisfactorily in nearly every circumstance, although it does get a bit loud when you demand full power moving into the outside lane of the motorway. At other times it’s an easy car to drive, particularly the automatic (the gearlever on the manual cars is a bit awkward). 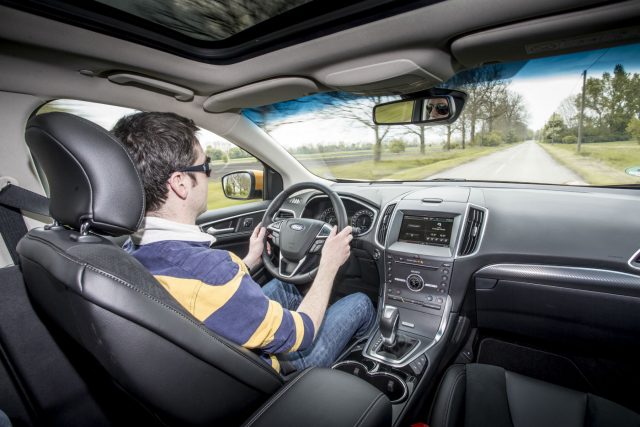 Easy to drive? What about its much-vaunted size?

That is an issue. The length and height are not the problem, but the width might be. The Edge feels like a very wide car, and what gives it so much presence on the road can be intimidating in places where you’d simply slip through in a Ford Kuga.

The upside is interior space, which really is deeply impressive. There’s shoulder room aplenty, while rear legroom is gargantuan. Recline the rear seat and you could sleep from London to Leeds.

The Edge’s length also means that it has a generous boot capacity of 602 litres, and that’s with a space-saver spare wheel under the floor.

The divided rear seats fold flat at the touch of a button from the boot area, but lifting them back into place is a herculean job. The springs that help flip the seat forward need to be fought when pushing it back up. Some muddled thinking here from Ford.

The Titanium and Sport models come with a hands-free tailgate – with the key in your pocket you simply wave your foot under the back bumper. 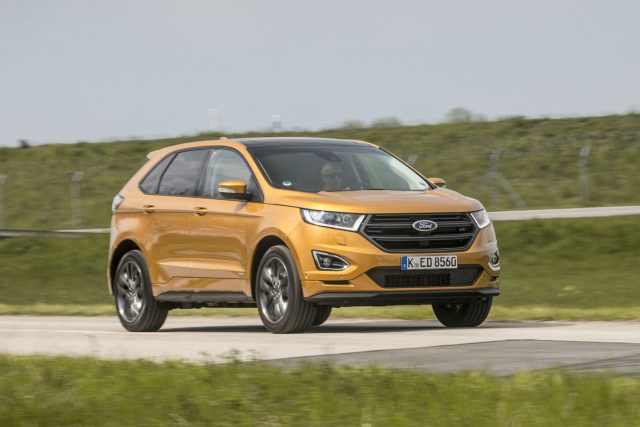 Yes, but it’s a Ford, not an Audi, so the quality will let it down

Not true. According to Which? Ford and Audi reliability is as close as it could get. As for the touchy-feely bits inside, well, the Audi Q5 does feel more premium, but Ford keeps on getting better and what you have here is really rather good.

And you might forsake some of the German glitz because the Ford Edge comes packed with equipment that would make the equivalent Audi the thick end of £10,000 more expensive. Rear-view camera, front and rear parking sensors, hands-free tailgate, navigation, heated seats, DAB radio, keyless start, privacy glass and ‘active noise control’ are standard on the Titanium version. The £2,000 Lux pack adds leather, heated rear seats, power memory front seats and a panoramic roof.

The Edge is comfortable too, the large front seats providing a layer of plushness with an underlying level of support. The ride is quite acceptable in an SUV sense; that is, it’s firm but comfortable nearly all of the time.

Sport models get ‘adaptive’ steering, which varies the weighting according to road speed. It’s an acquired taste and you may well prefer the regular steering fitted to the Edge Zetec and Titanium. 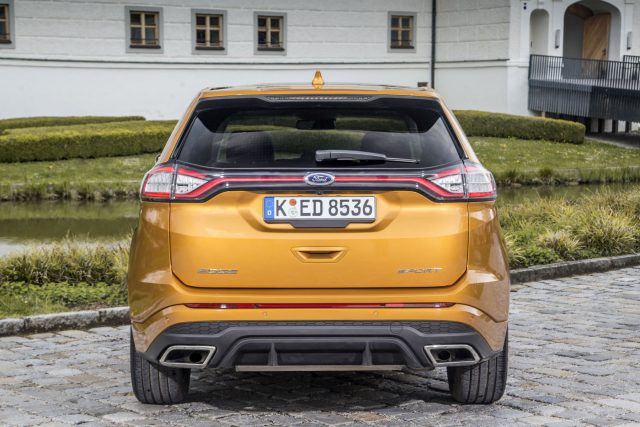 First impressions of the Edge are positive. While it lacks seven seats, that’s not that unusual if you look at the rivals like the Q5, BMW X3, Mercedes GLS and Volvo XC60. These are all significantly more expensive yet also offer only five seats.

The two rivals from Korea, Hyundai Santa Fe and Kia Sorento, do offer a great capacity but fall short of the Ford’s panache – both worthy but ultimately dull.

The Edge is far from that. Stylish, aggressive even, it’s no utilitarian wagon, even though under the skin it offers great practicality. The space, interior design and pleasing driving characteristics all give it significant appeal.

If you drive a Ford Galaxy, S-Max or indeed any other large people carrier but don’t need the full seating capacity, Ford’s Edge could bring a lot more fun into your life.