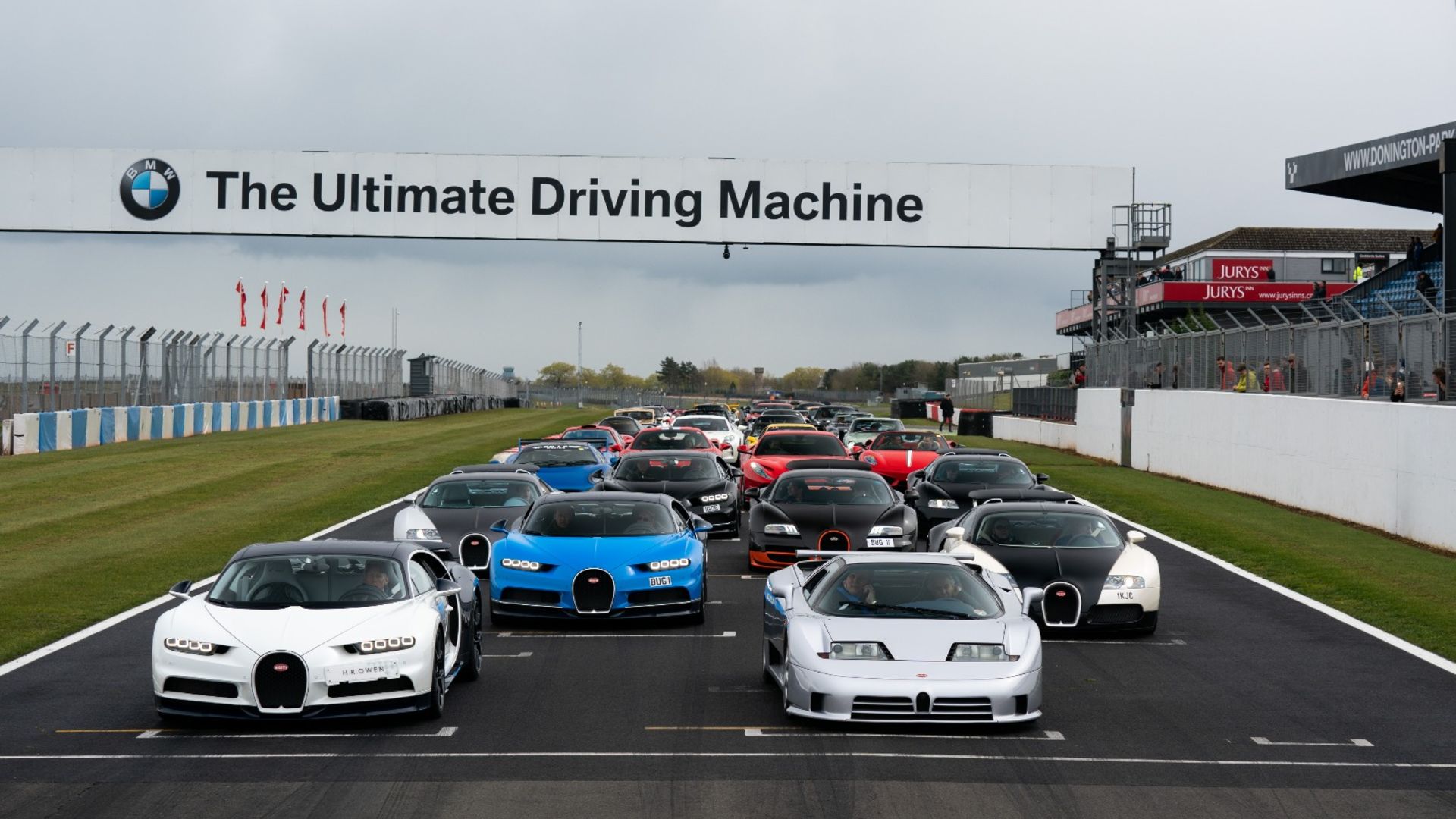 The Secret Meet at Donington Park, organised by Supercar Driver, saw more than 350 supercars and hypercars in attendance, as well as a number of historic racers. All of them could take to the track, too. Bugattis, Koenigseggs, Paganis – that’s the standard of cars here. And yes, those are plurals… 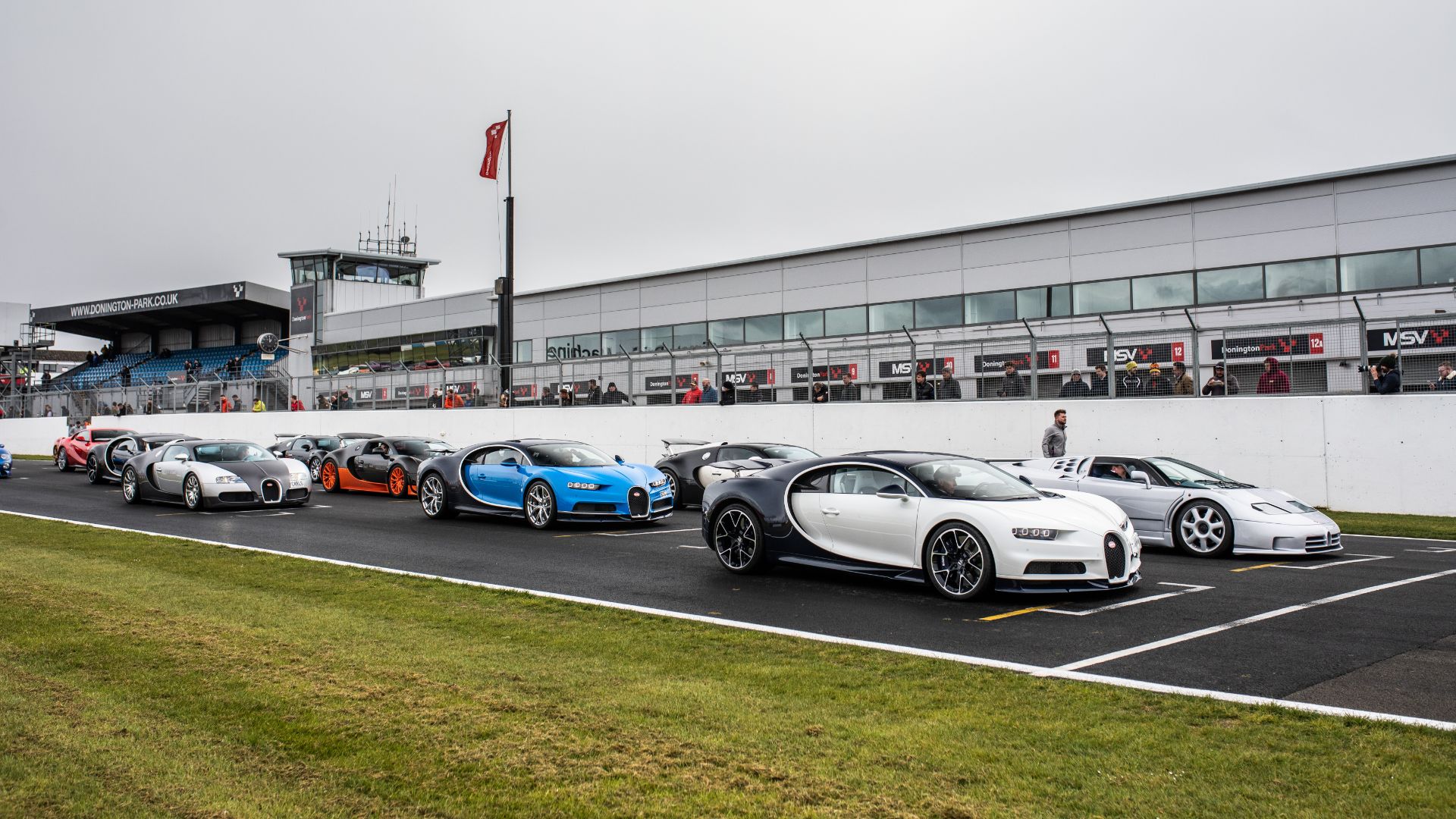 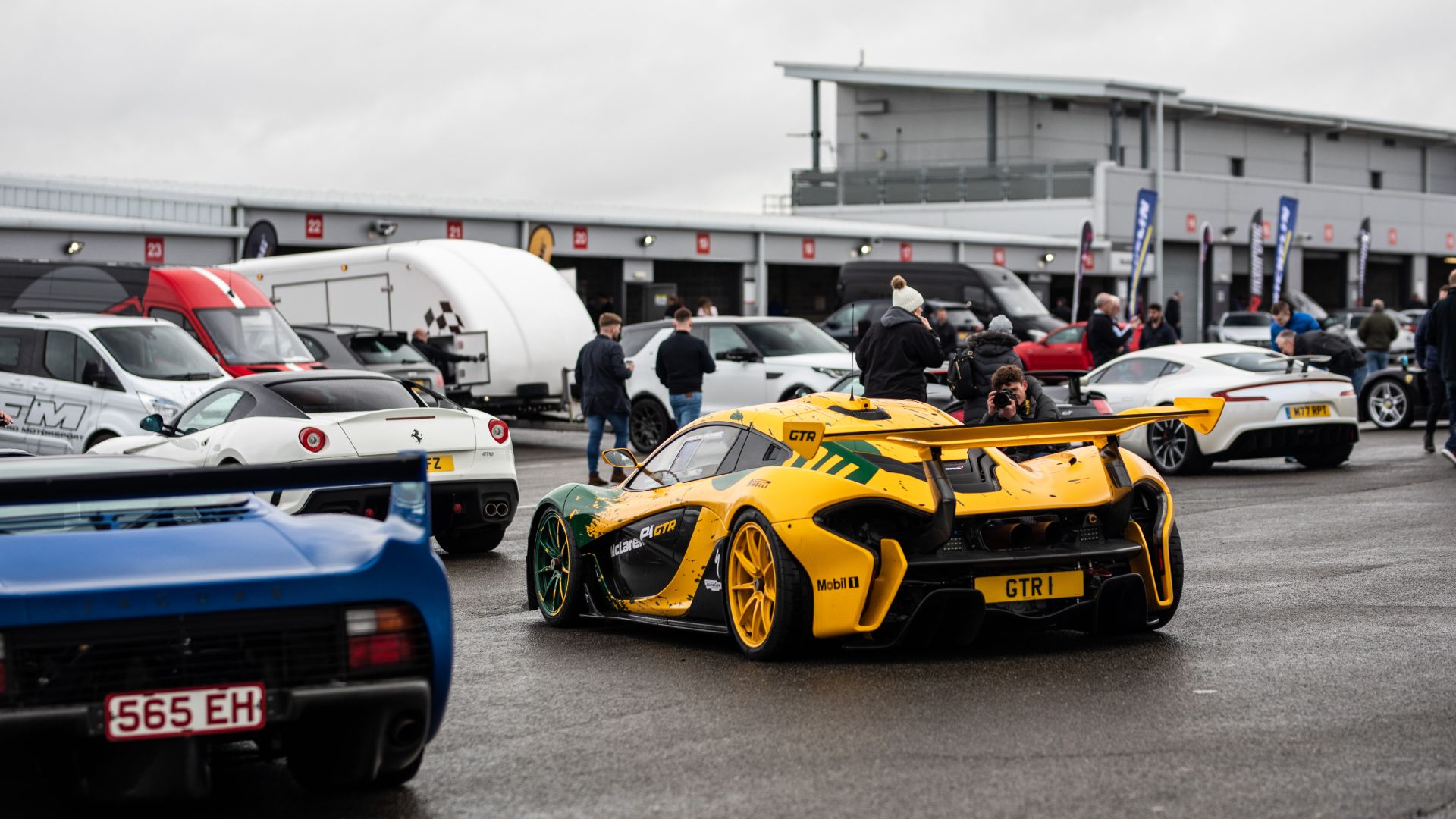 There are certain supercar unicorns you simply don’t see unless you’re at an event like this. Where else could you take a shot where an Aston Martin One-77 and McLaren P1 GTR share frame space? It’s like the Avengers, but for cars. 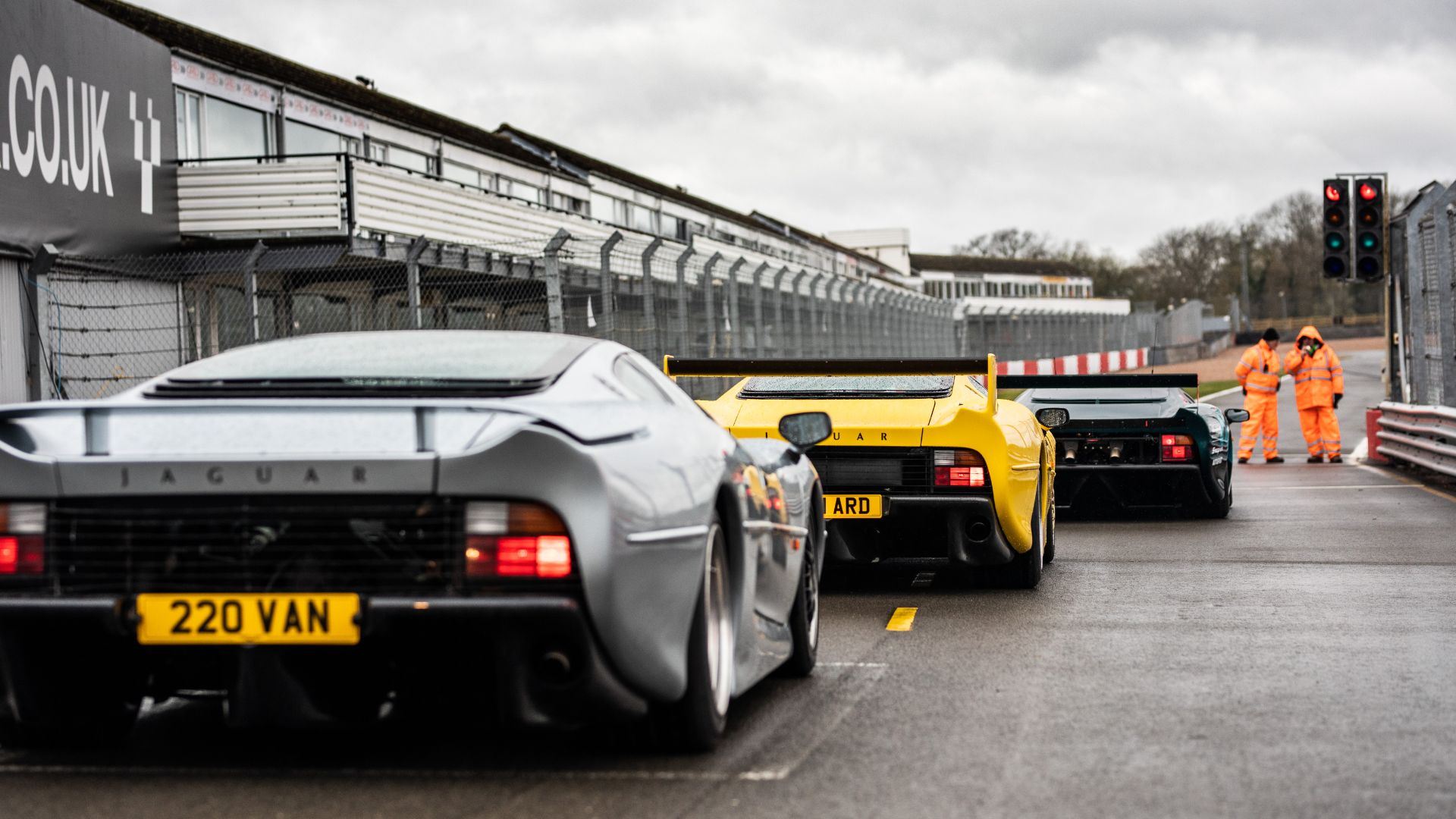 The Secret Meet is a celebration of the supercar and hypercar genre. If you simply want the latest and greatest, get down to the Geneva Motor Show. If you wanted a hoard of XJ220s sharing track-time with Bugatti Chirons, however, nothing else will do. The history of the hypercar lines the pit lane.

King of the hypercars 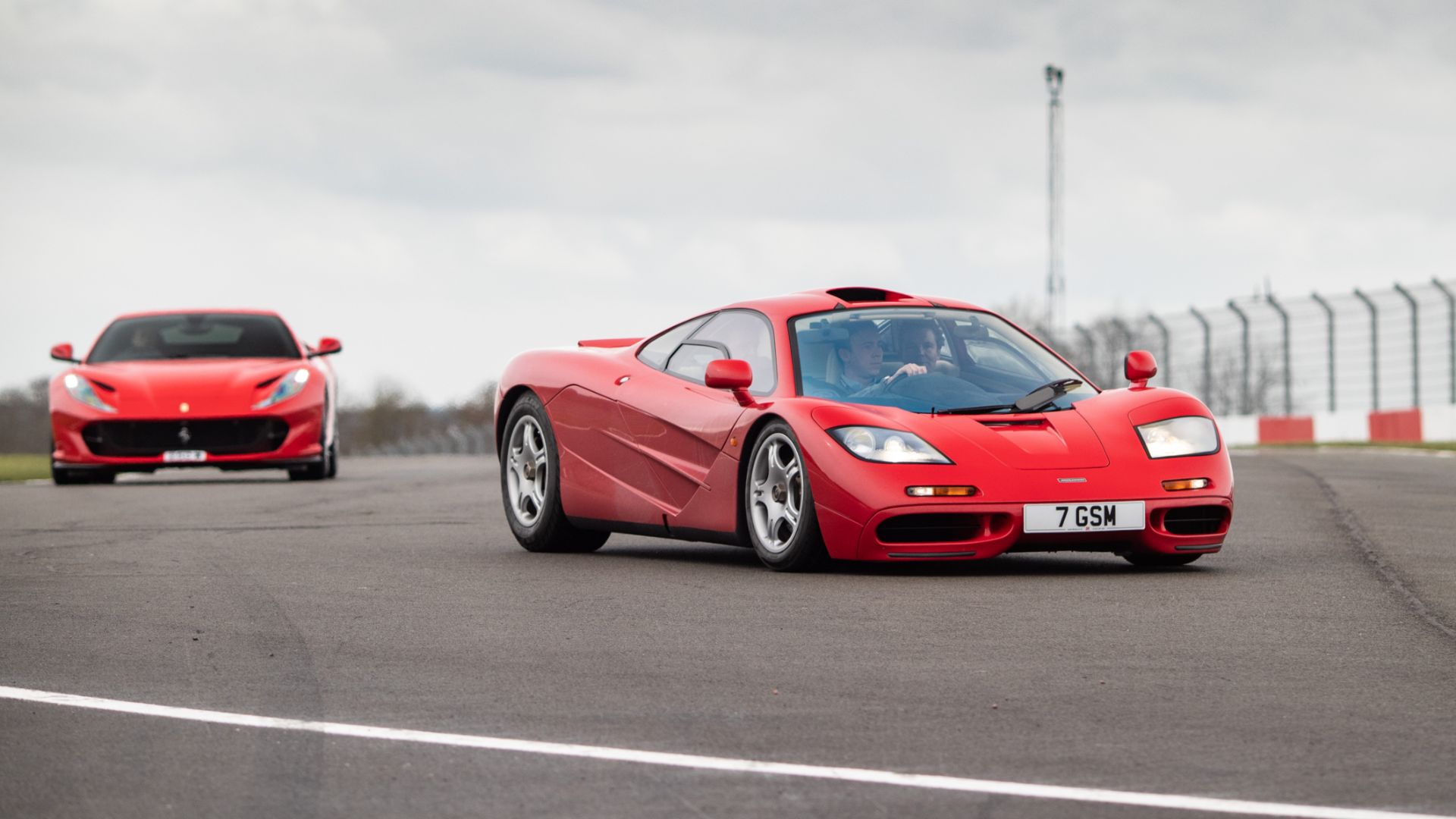 You can sum up the significance of an event by the attendance (or lack thereof) of a single car. That is the McLaren F1, a red example of which can be seen here at Donington with a Ferrari 812 Superfast tailing. The uppermost hypercar royalty.

The latest and greatest 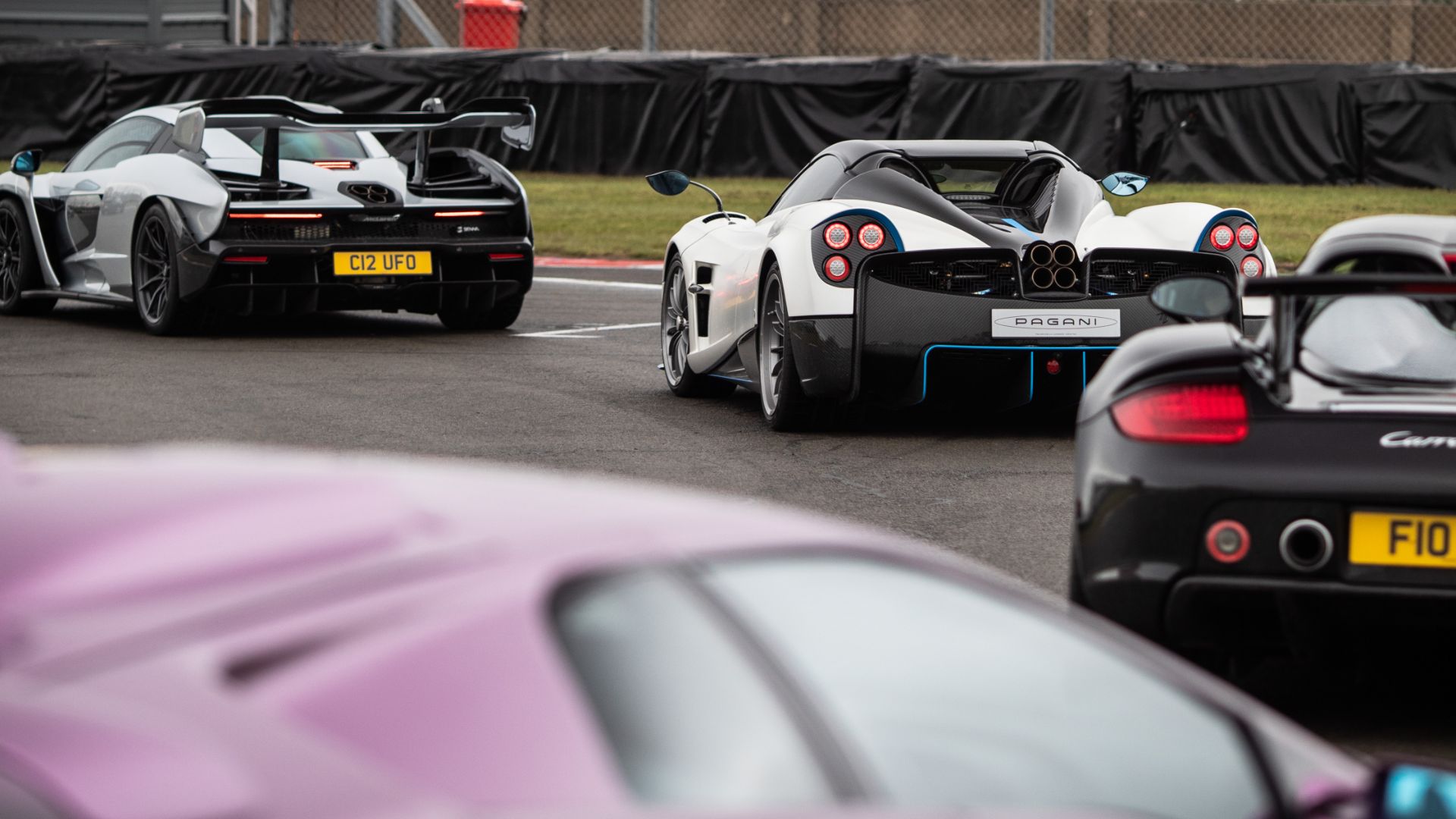 That’s not to say this is a relic-fest. The prominent supercar, hypercar and racing car collectors making up the 1,000-member Supercar Driver collective own plenty of newer metal, too. Witness a McLaren Senna leading a Pagani Huayra Roadster and a Porsche Carrera GT on track. 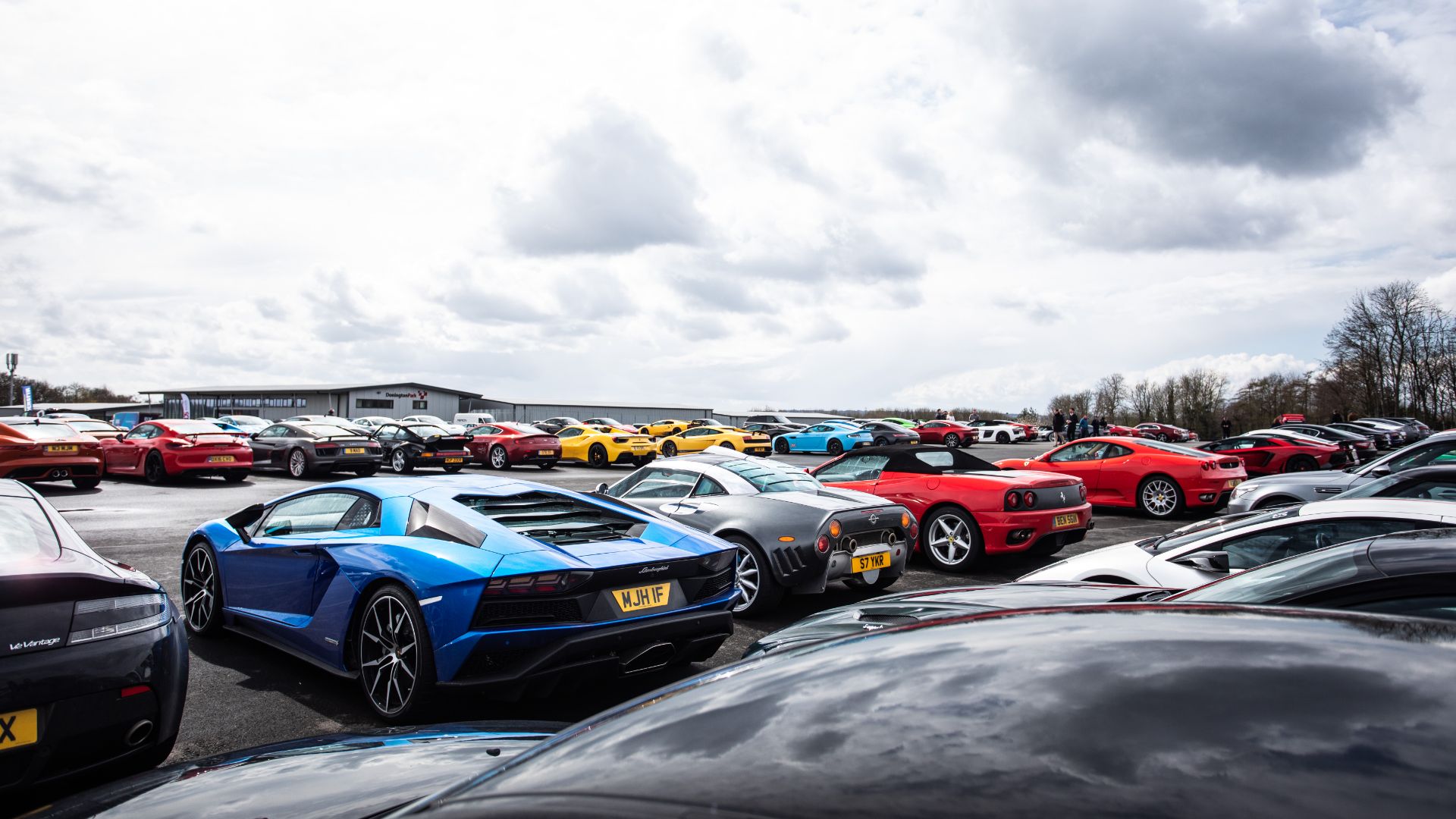 The supercar world is home to the weird, wonderful and lesser-spotted. For every 1,000 Lamborghini Huracans there are in the world, there’s a Spyker C8. Spot one here casually parked amongst some Ferraris and Lambo, which are, by comparison, mass-produced. 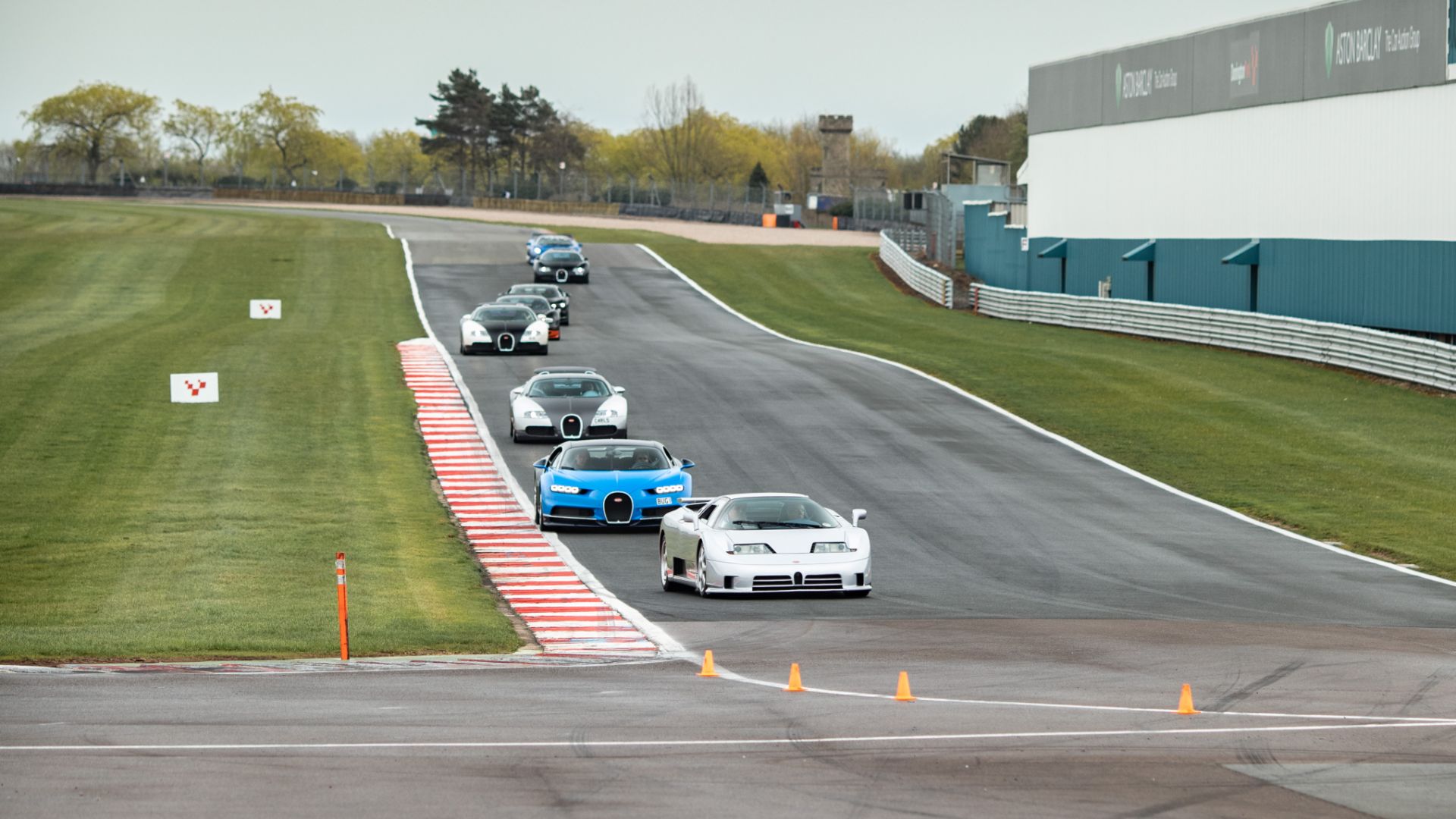 The cars got out on-track for some laps, including the aforementioned hoard of Bugattis. Just count the horsepower: Chiron, EB110, Veyron, Veyron, Veyron Supersports, Chiron, Veyron, EB110…  That’s well over 8,000hp in one shot, right? 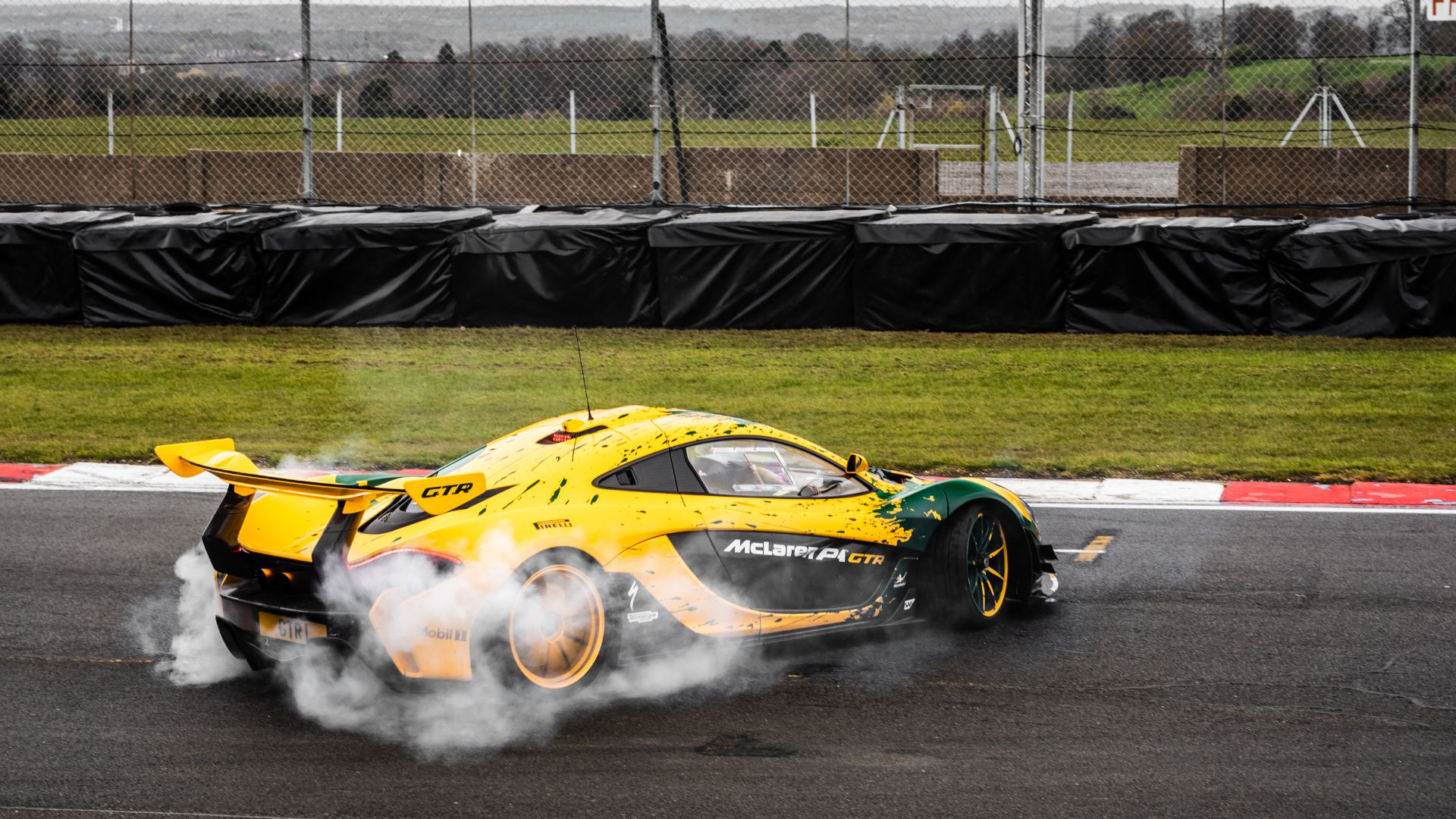 It’s not all parade laps either. A P1 GTR might be a multi-million-pound piece of track-only McLaren royalty, but would that really stop you ripping a few donuts at Donny?

The great and the good 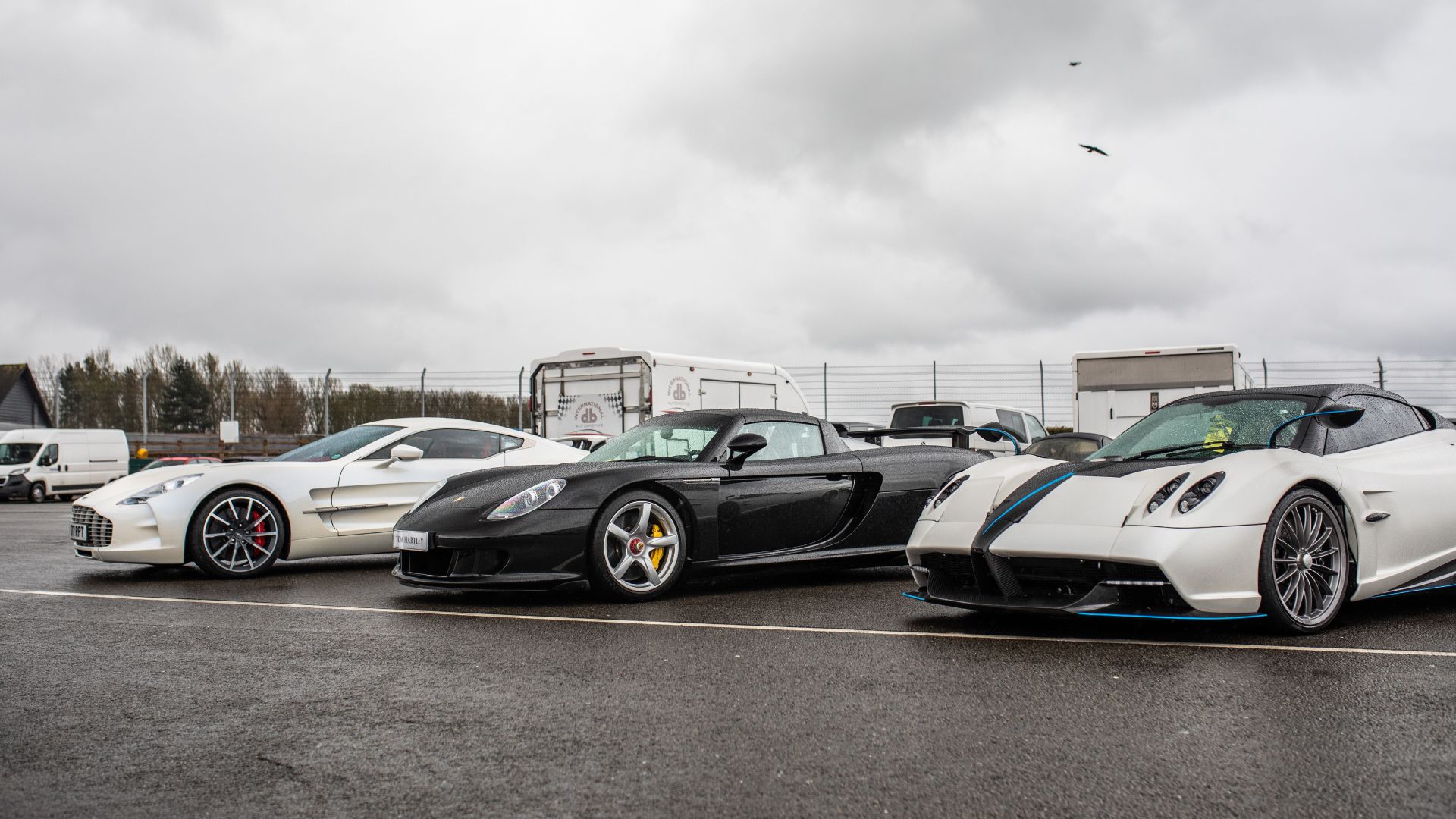 There’s no particular narrative context to adding this picture here. Then again, need we justify a shot that has an Aston Martin One-77, Porsche Carrera GT and Pagani Huayra Roadster sat side-by-side?

Welcome to the candy shop 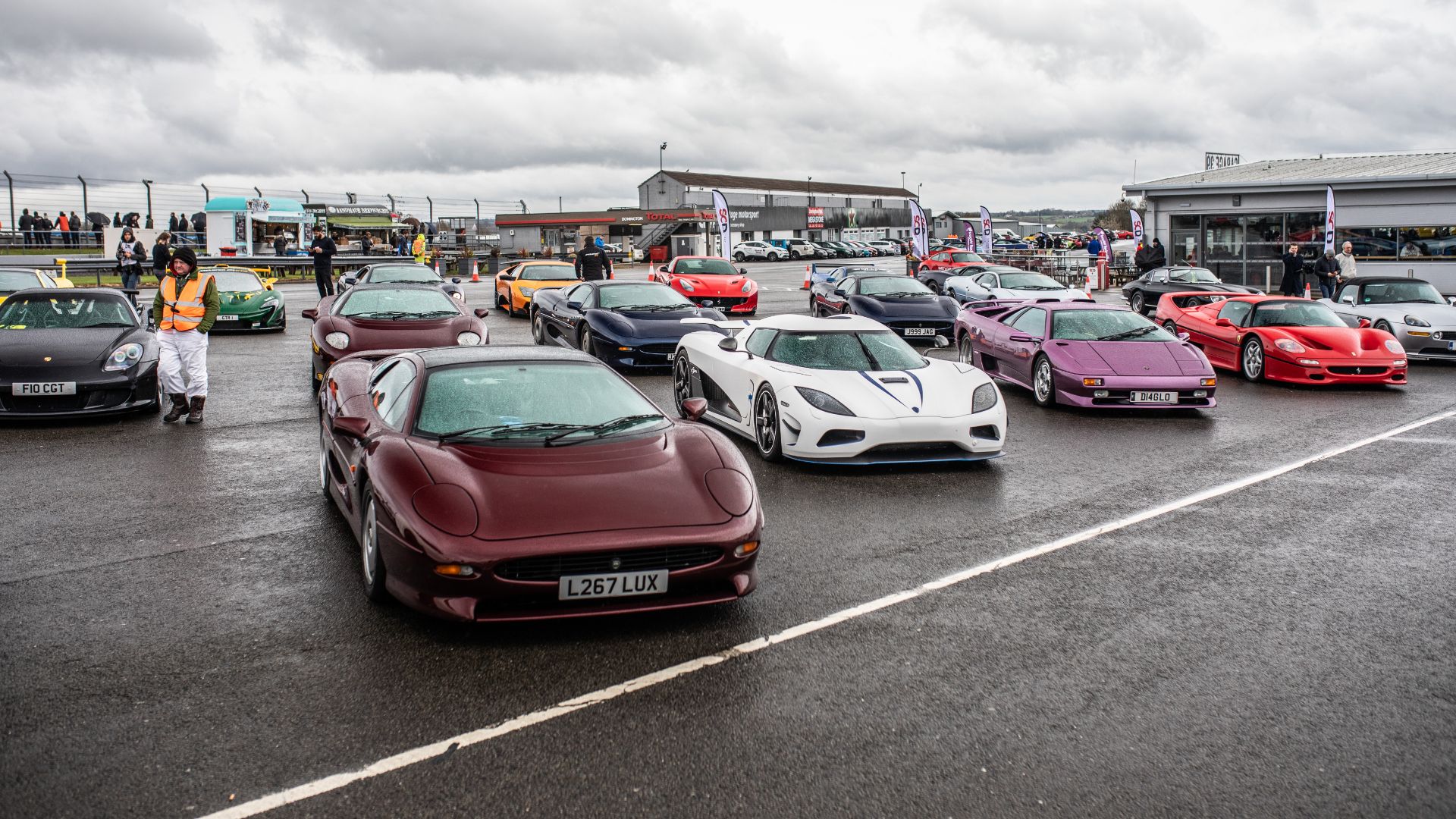 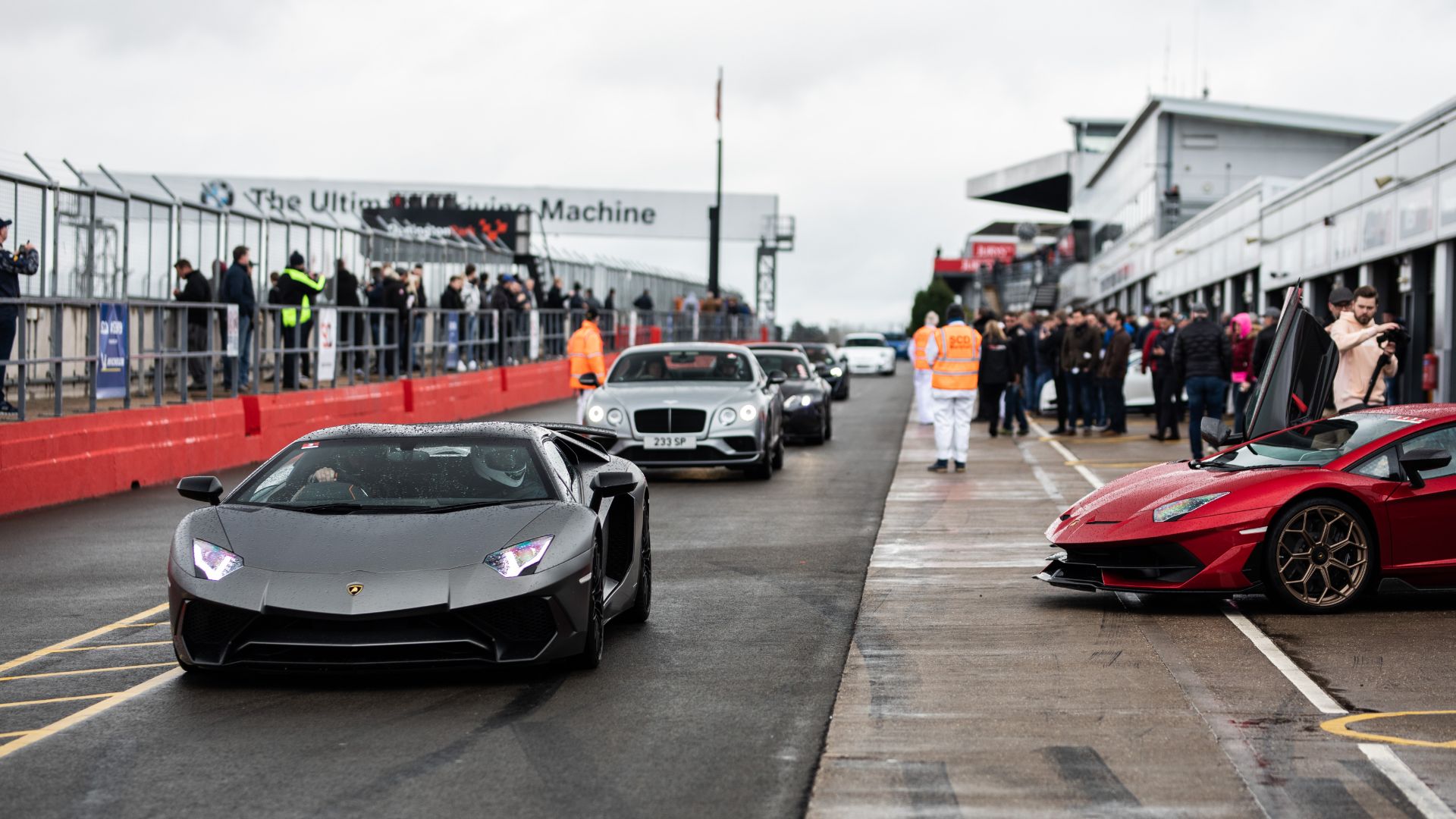 Has anyone seen an Aventador LP750 SV with a new Aventador SVJ yet? Well, if not, you have now. This red example showed up at The Secret Meet, and is pictured along with a matte older-generation SV.

Veyron vs. Chiron – which wins? 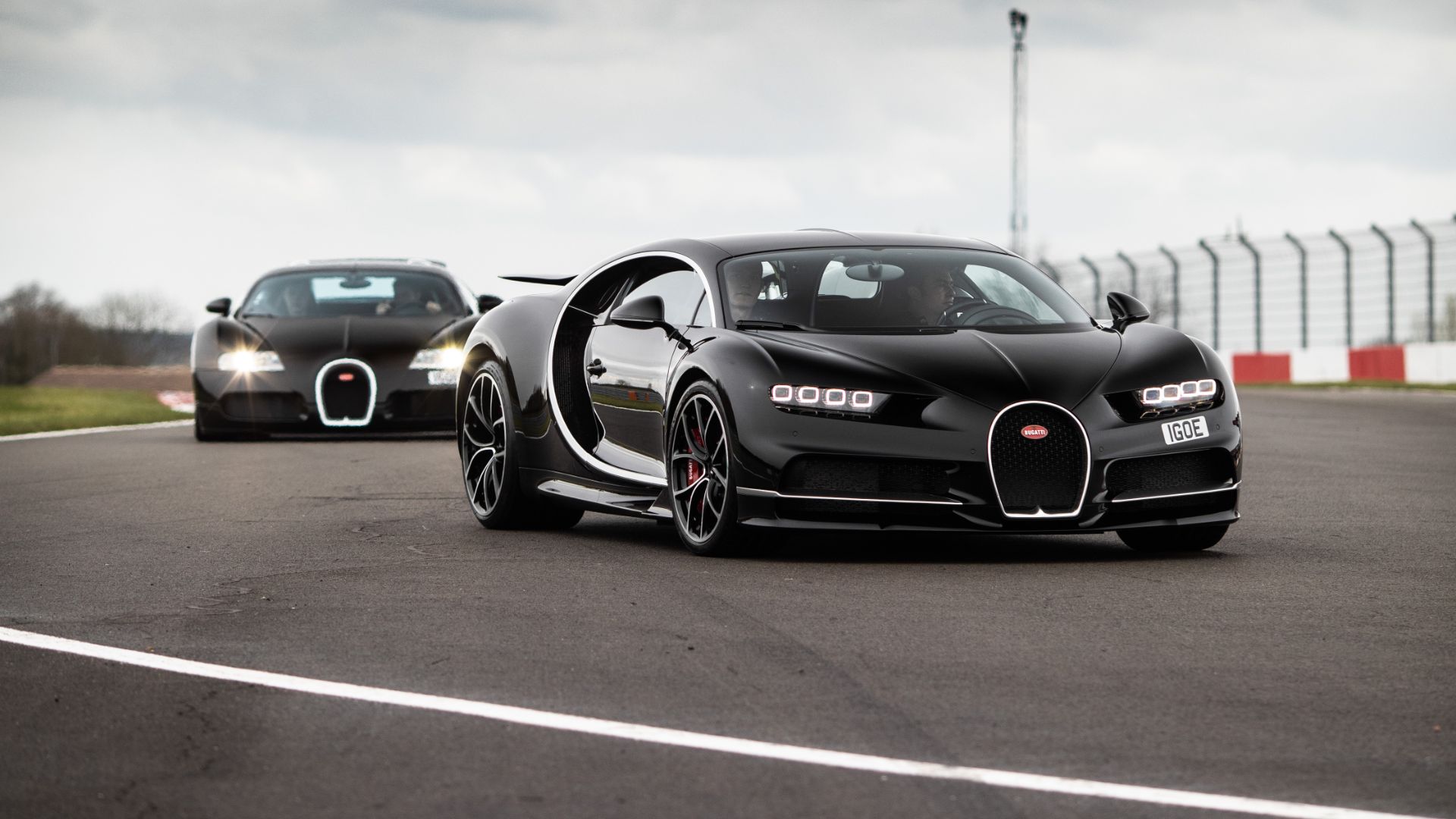 This is a perfect shot for comparing the early generations of Bugatti’s two post-millennium hypercars. A black early Veyron follows a black Chiron. While the Chiron was a beautiful piece of sculpture from the off, the Veyron has taken a few years to mature. A subtle spec such as this helps it a lot.

Historic racers: McLaren M8F Can Am 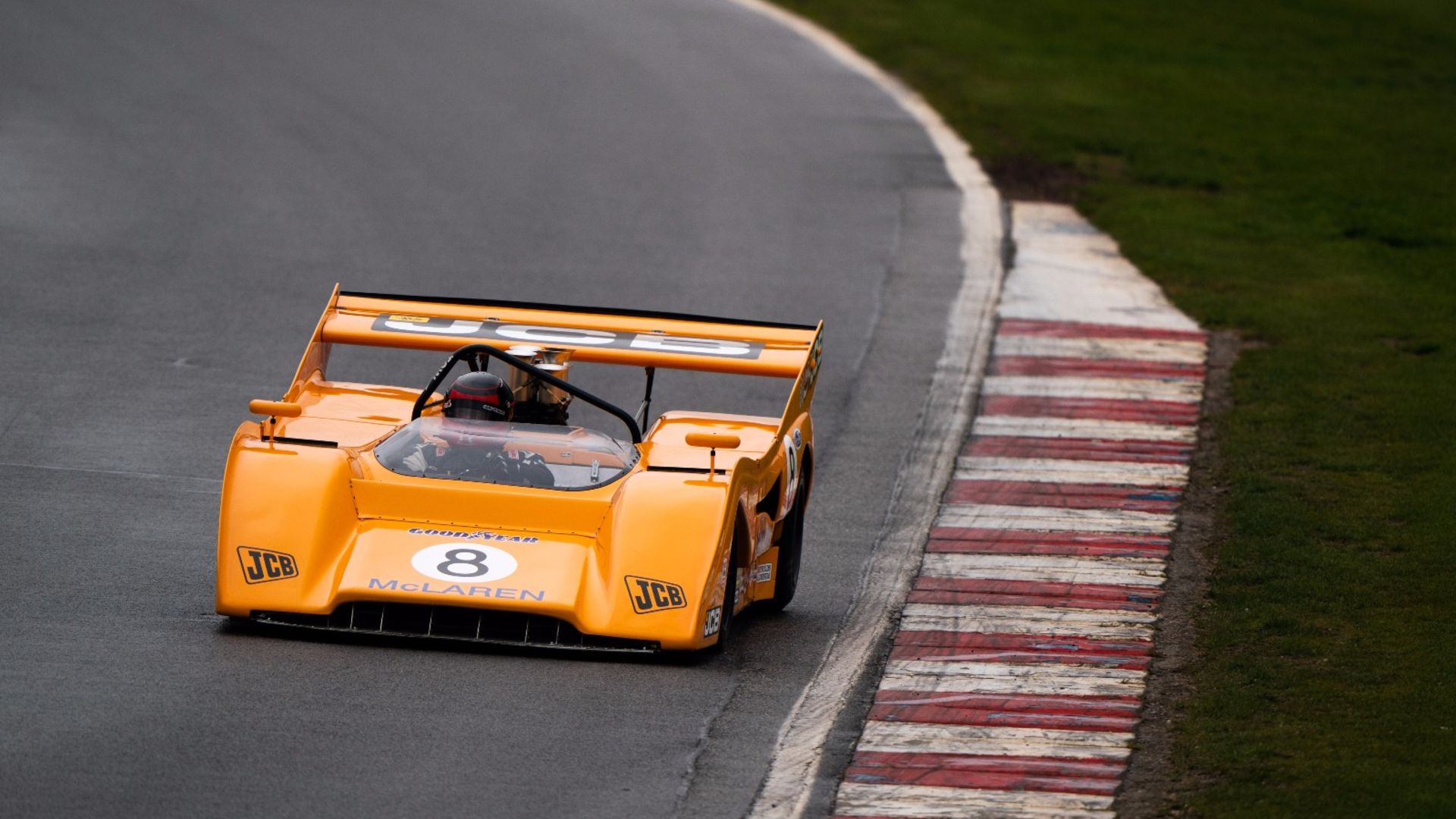 While today we know McLaren for its Formula 1 exploits, Bruce McLaren was equally as passionate about Can Am sports car racing in-period. In fact, it was while testing a Can Am car that Bruce passed away, during an accident at Goodwood. There’s nothing quite like the roar of a Chevy big-banger, trumpets sprouting asunder from an orange wedge of historic McLaren racer. 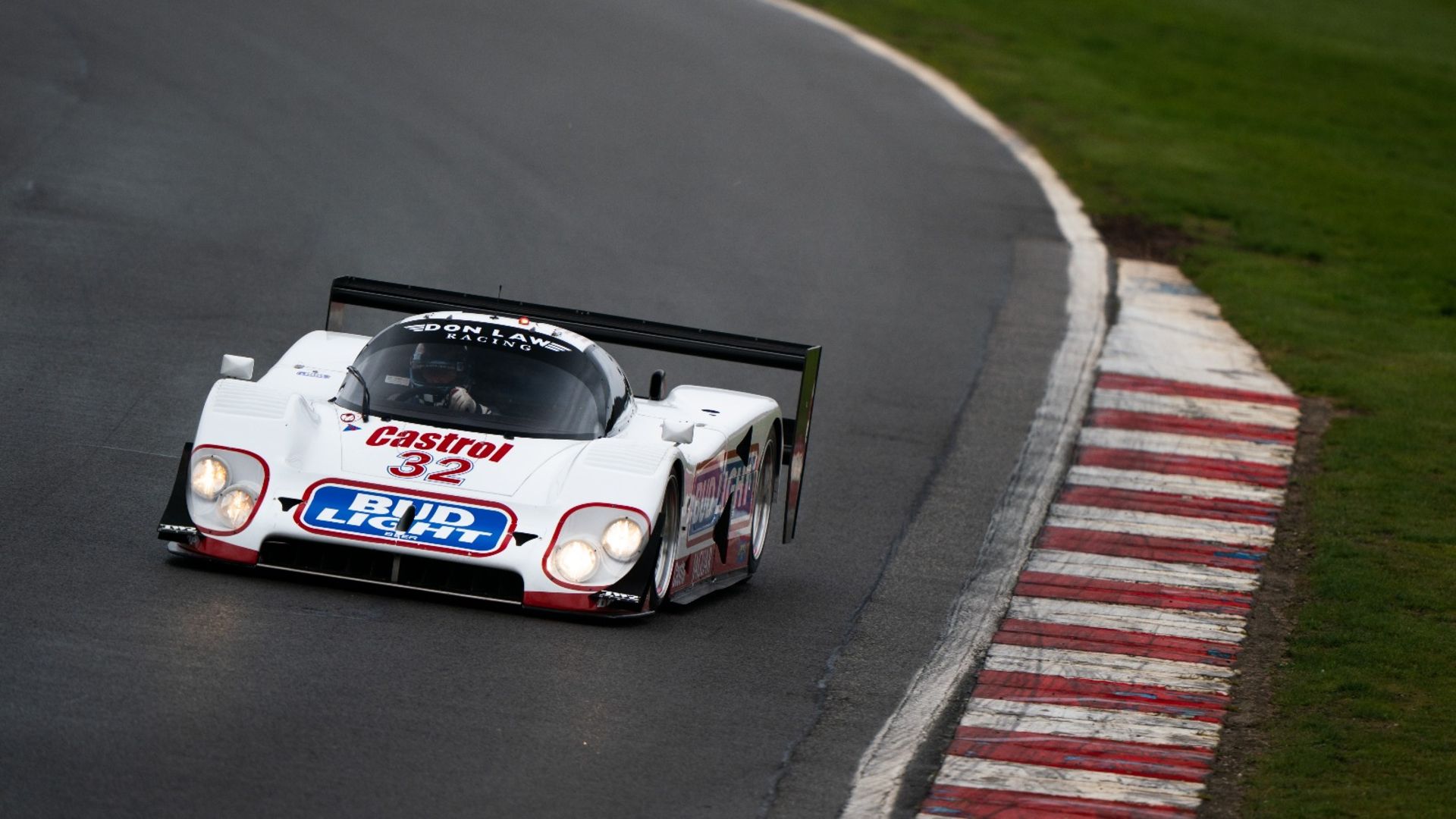 This derivative of Jaguar’s Le Mans-winning monster has claimed victory up the Goodwood Festival of Speed Hill a few times in the shootout. The Bud Light livery is simple but beautiful, and that V12 wail never gets old. 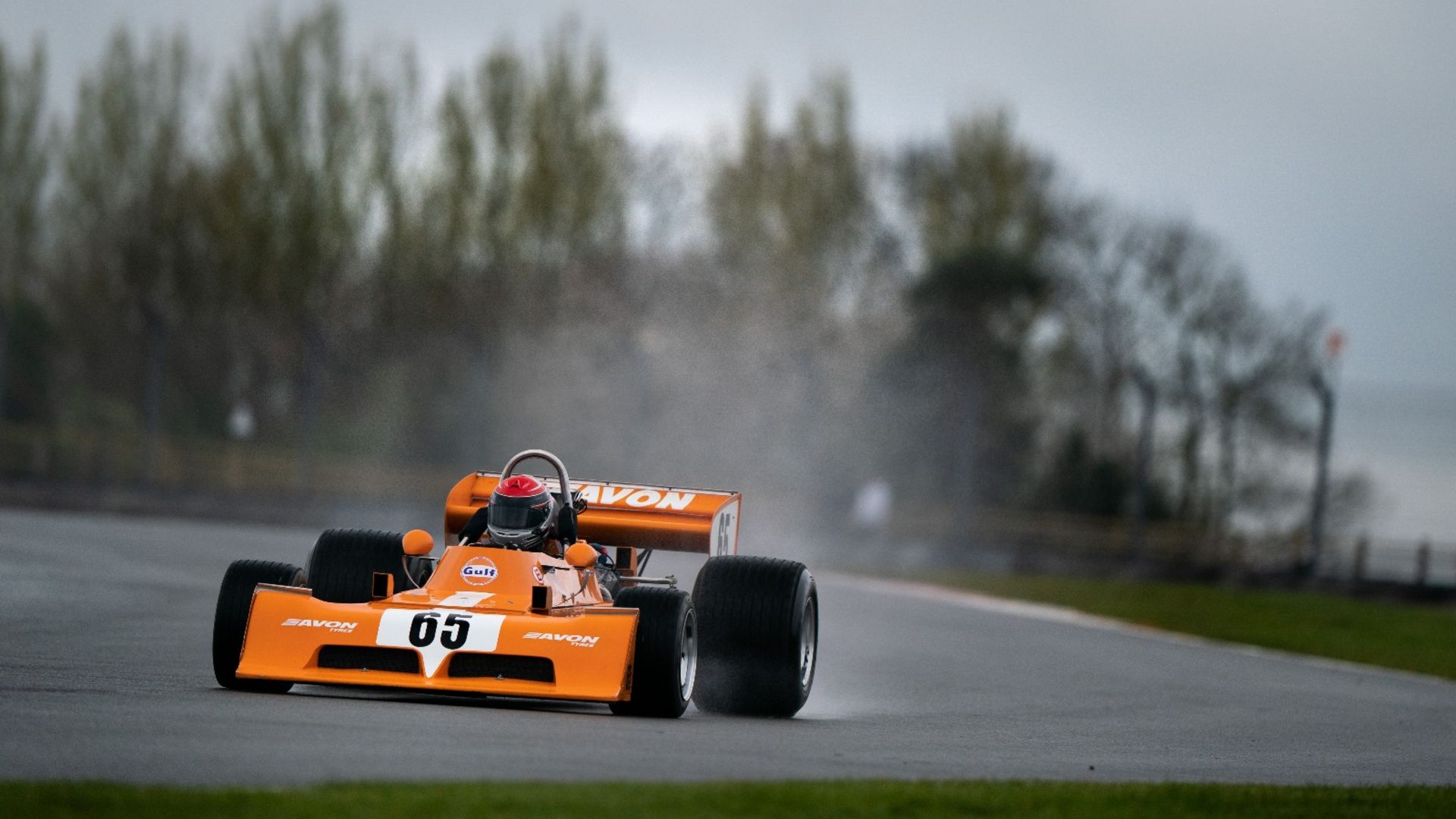 As you’ll probably have noted by now, it doesn’t matter how special your cars are, there’s no controlling the weather. The Secret Meet was evidently a greasy one. It takes a braver helmsman than us to get behind the wheel of a powerful fat-tyred single-seater for some laps at Donnington. 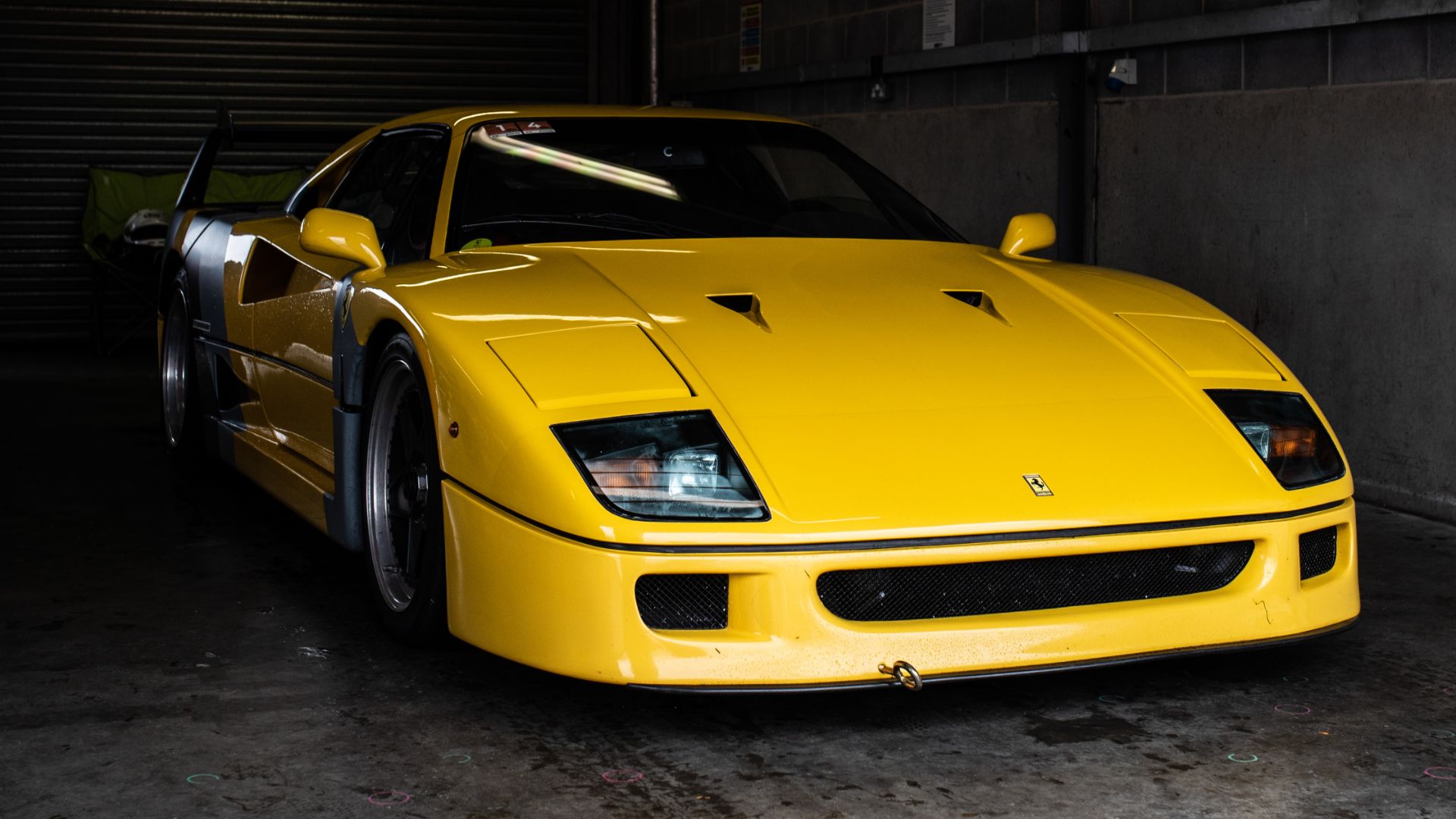 Back to the supercars and we start off quiet, with a slumbering F40 under dim pit garage lighting. This legend looks resplendent in yellow paint. 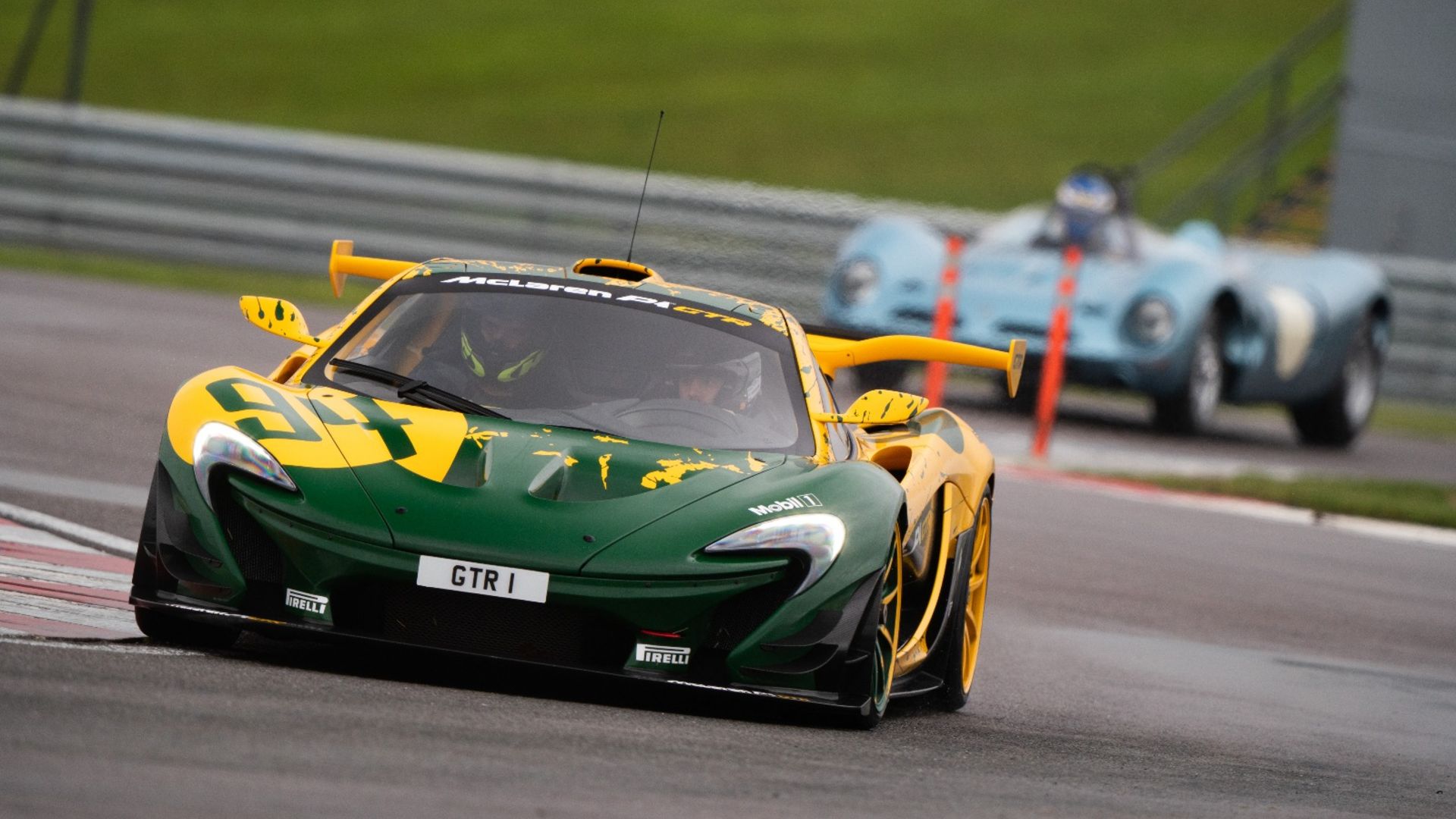 A good shot for variety at this event. The Bizzarrini is a historic sports racer, the P1 GTR a modern-day track toy. No prizes for guessing which would be quicker.

Stare into the eyes of the Bug 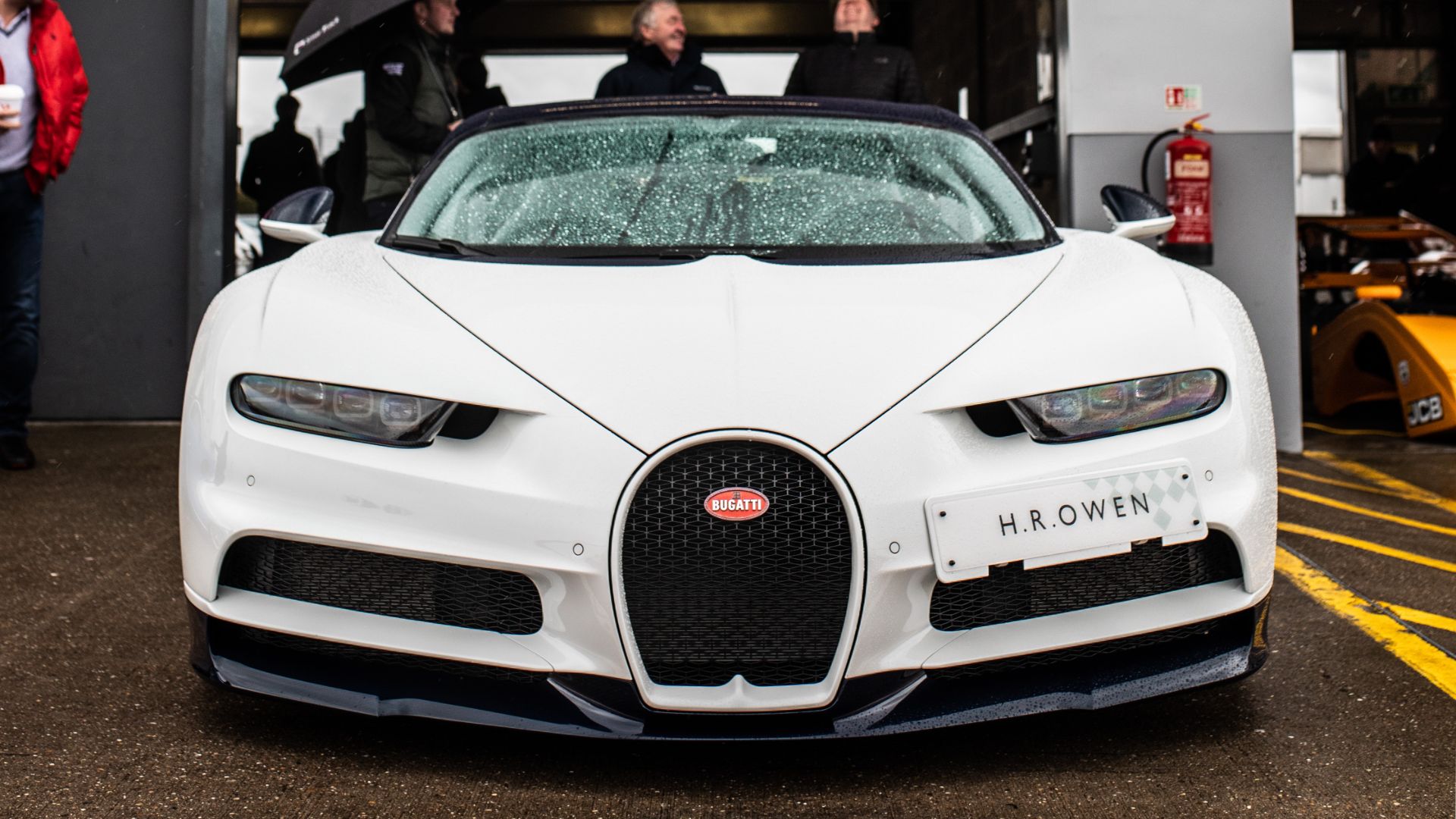 A nice close-up shot of a Chiron, with a dousing of rain. We needn’t justify that. 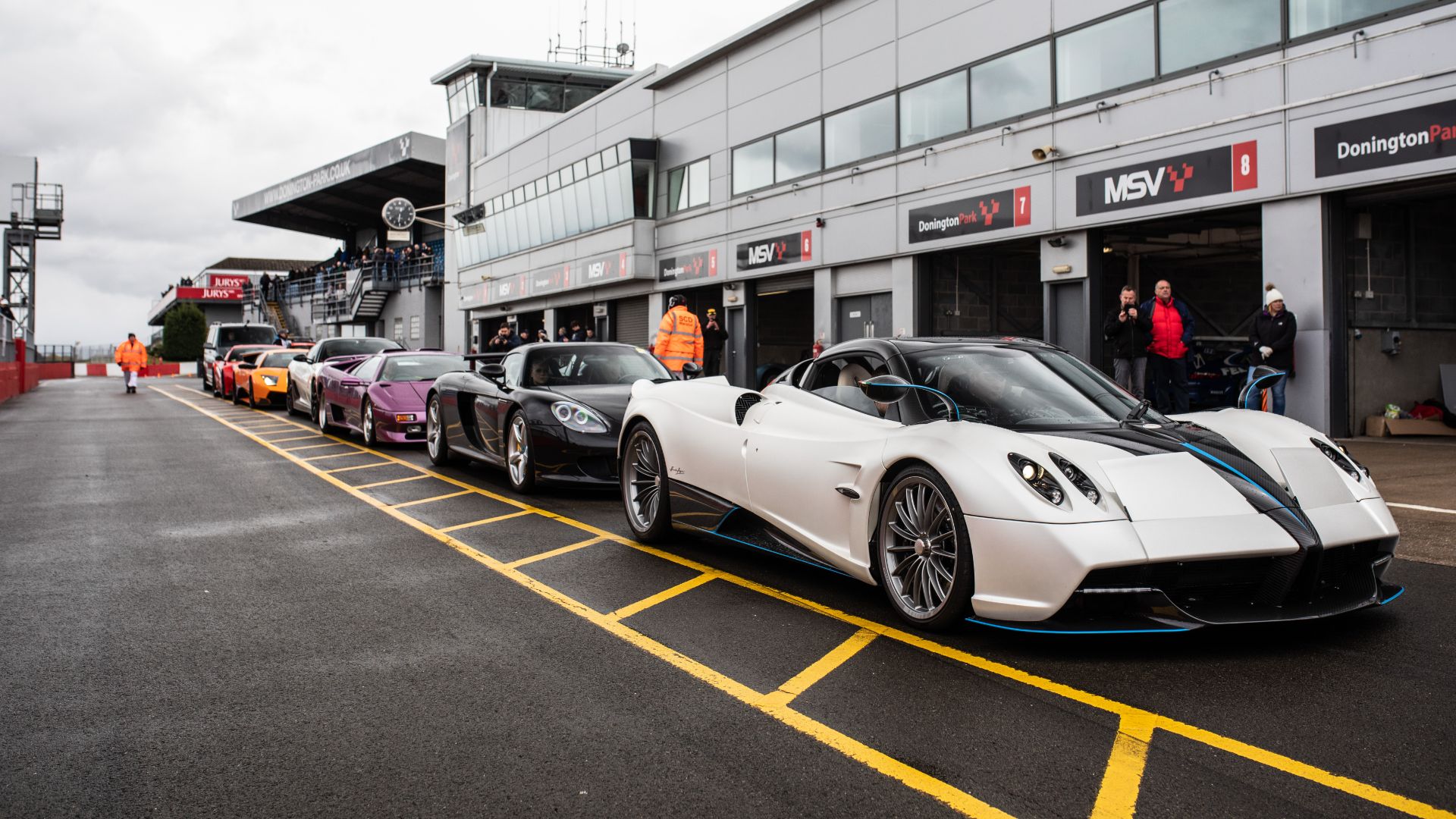 More Huayra and CGT loveliess, with a couple of Lamborghini raging bulls bringing up the rear.