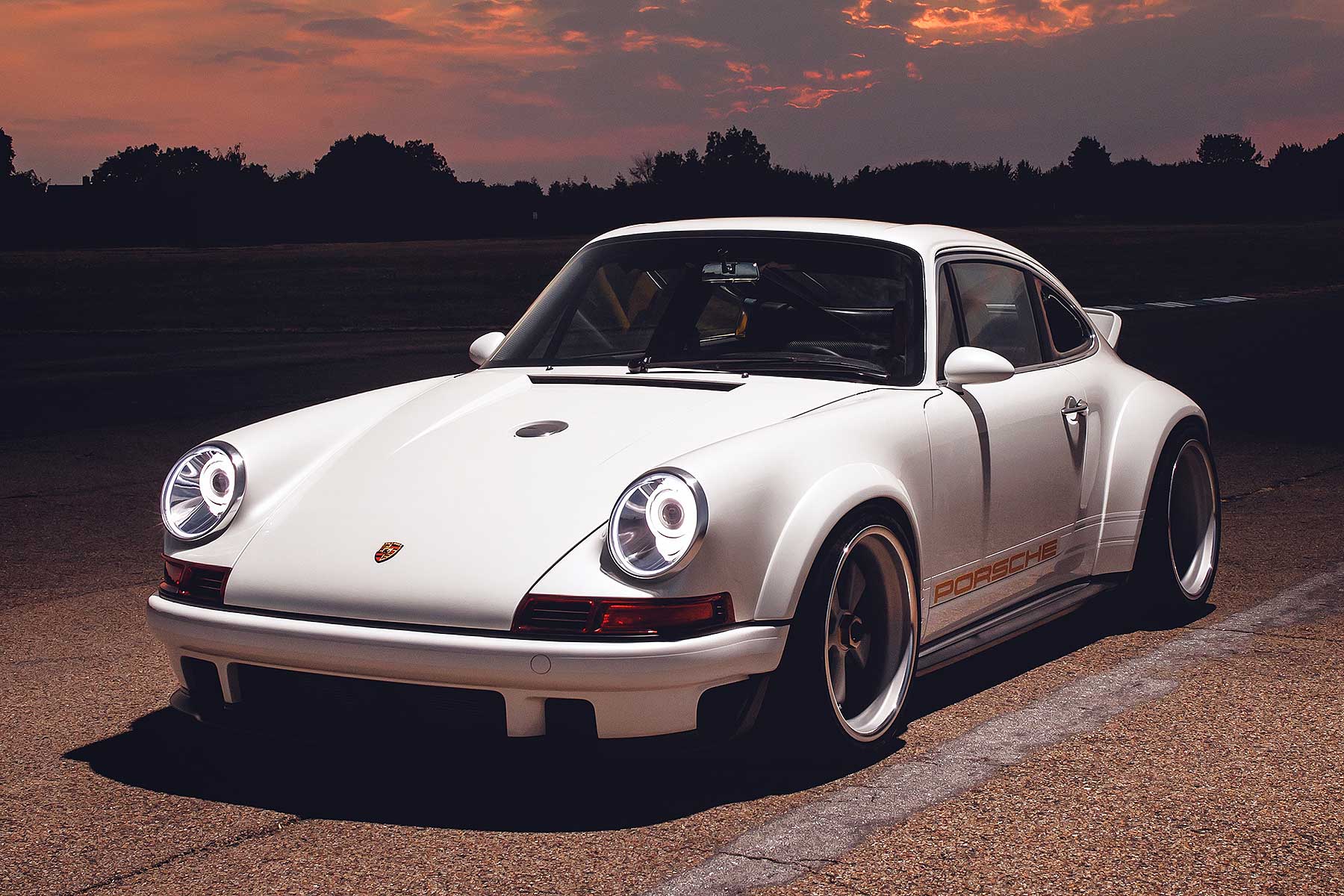 Singer Vehicle Design has revealed a jaw-dropping new Porsche 911 reimagination at the Goodwood Festival of Speed. It has worked with Williams Advanced Engineering and other technical partners on the ‘Dynamics and Lightweighting Study’(DLS) of a period 1990 Porsche 964.

The car has a 4.0-litre air-cooled engine that produces an incredible 500hp at a dizzy 9,000rpm. Singer sought consultancy from the famed creator of the Porsche engine, Hans Mezger, and it packs in exotica such as titanium valves, magnesium materials and F1-inspired fuel injectors. 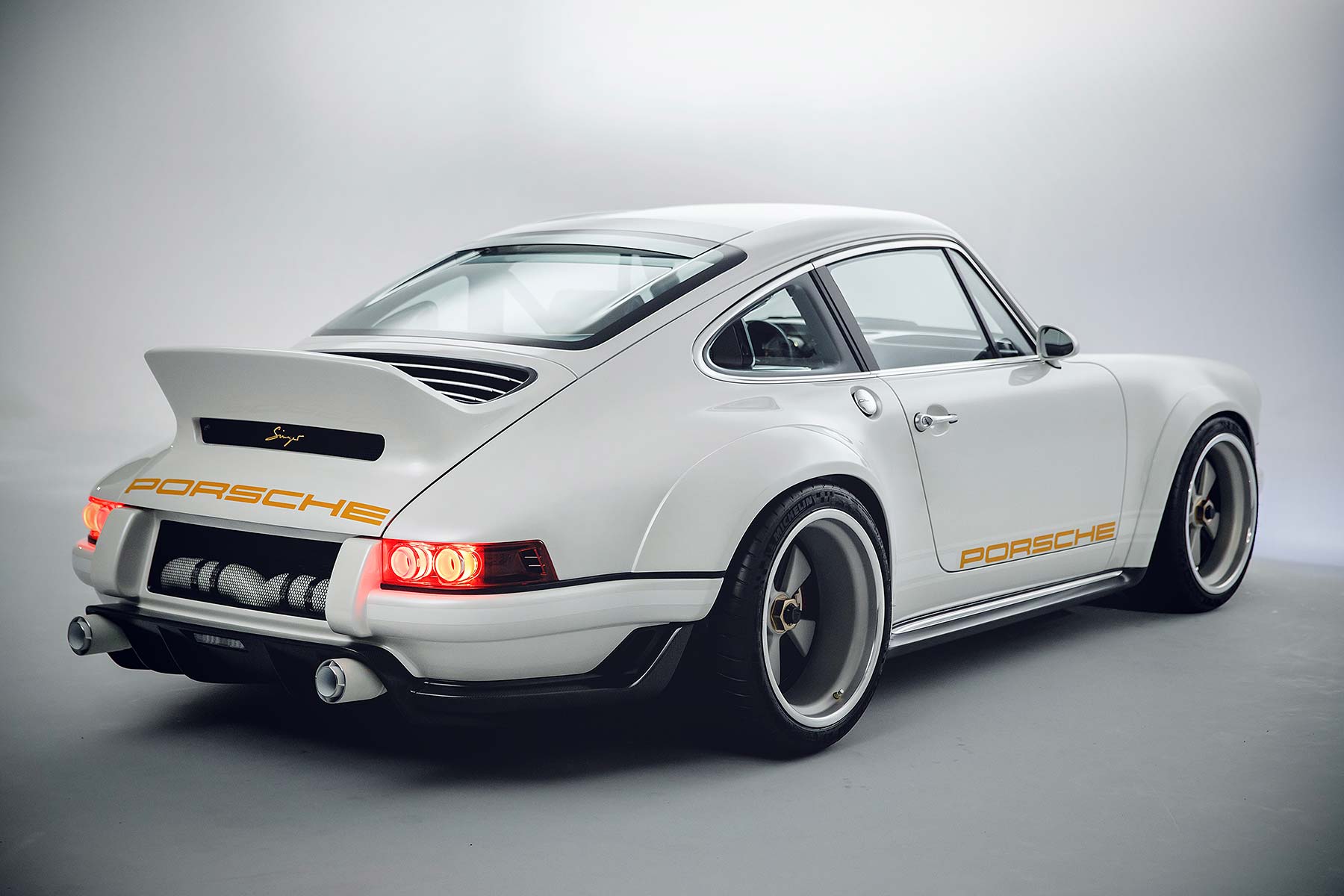 Williams Advanced Engineering developed the fearsome engine, and it also gave the car a full aero makeover, with the entire body assessed through F1-style CFD analysis. A redesign at the front has eliminated lift, the famed ducktail spoiler has been optimised and work on the roof channels and roof spoiler help it actually generate rear downforce at speed. 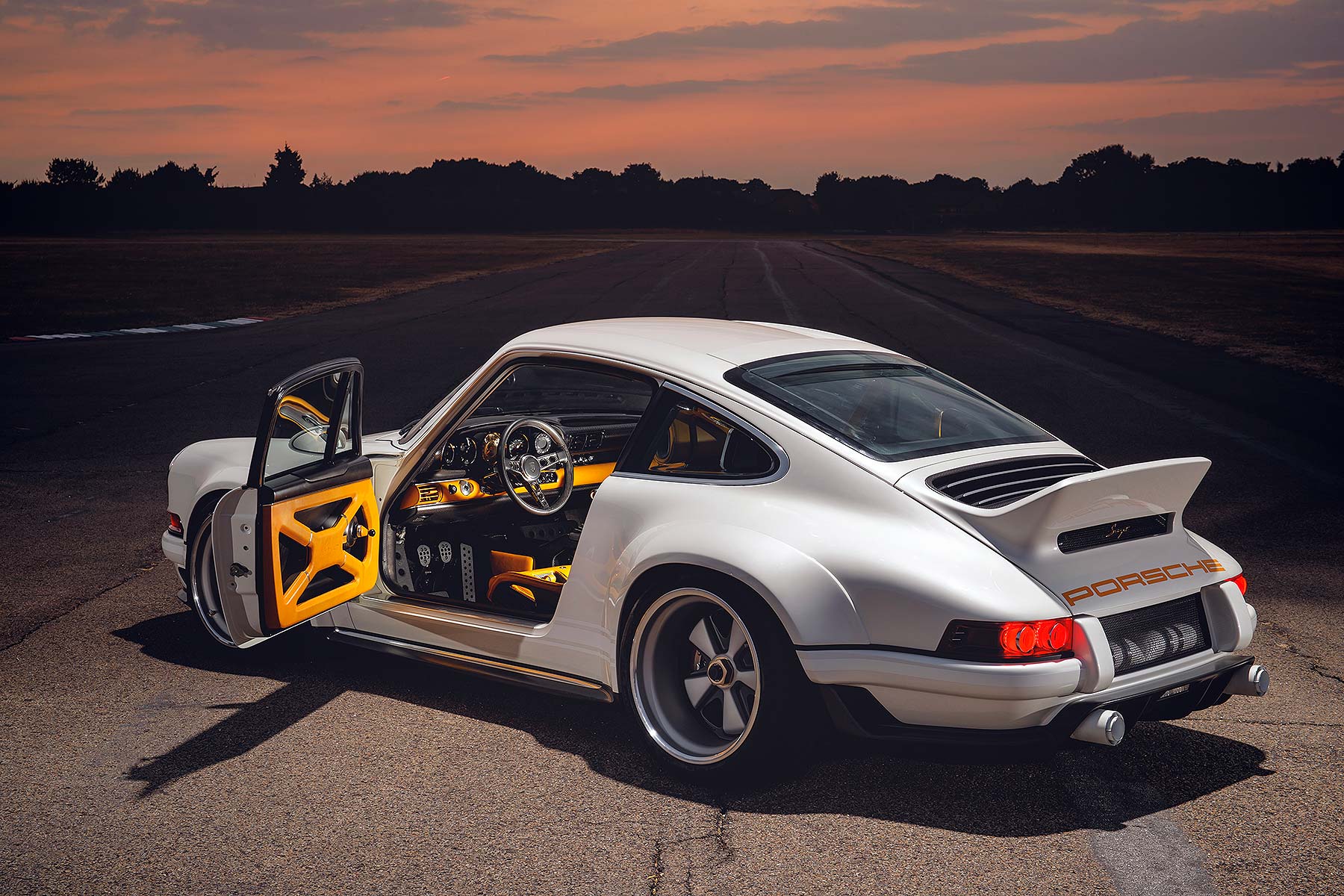 The bodywork is also fully carbon fibre, and each panel is unique to the Singer DLS. The only thing we don’t yet know is the final kerbweight, but as so much has gone into this incredible car, the figure itself is highly likely to be incredible…

Williams’ work hasn’t stopped there, either. It has given the suspension a full overhaul, and Bosch ABS and ESC has been fitted, along with Brembo carbon-ceramic brakes and bespoke Michelin Cup tyres. The wheels are forged magnesium and Williams has used its F1 experience to develop a centre-lock mechanism, made from aluminium and titanium. 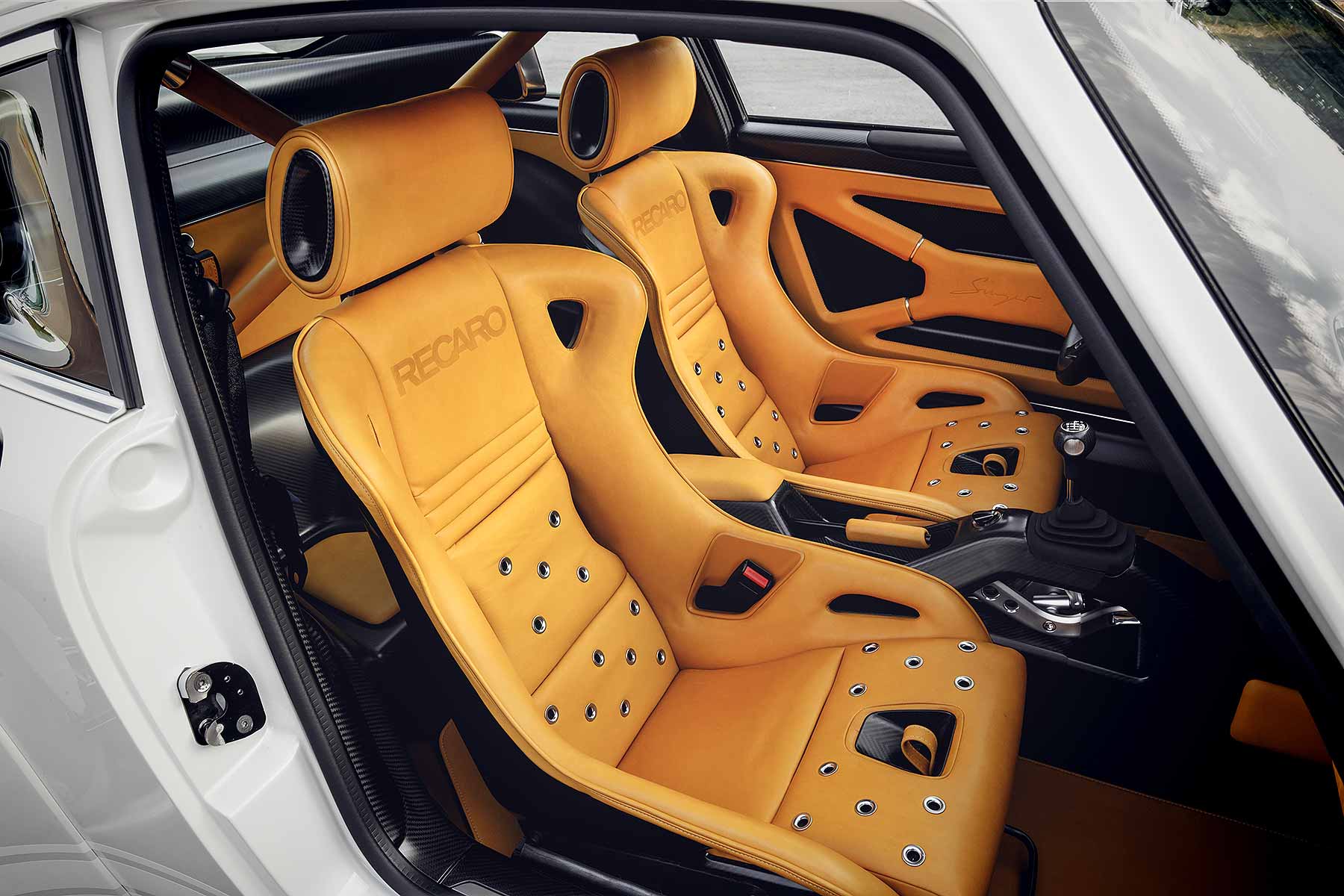 Inside, the Norfolk Yellow-coloured cabin is totally bespoke and typically Singer, i.e. stunning. There are Recaro carbon fibre sports seats, a Momo carbon fibre steering wheel and the manual gearlever has been raised up, and its shift mechanism exposed (and remade in titanium and magnesium).

Even the instruments have been reimagined by Singer, with hand-applied markings. The instrument panel itself is also carbon fibre. 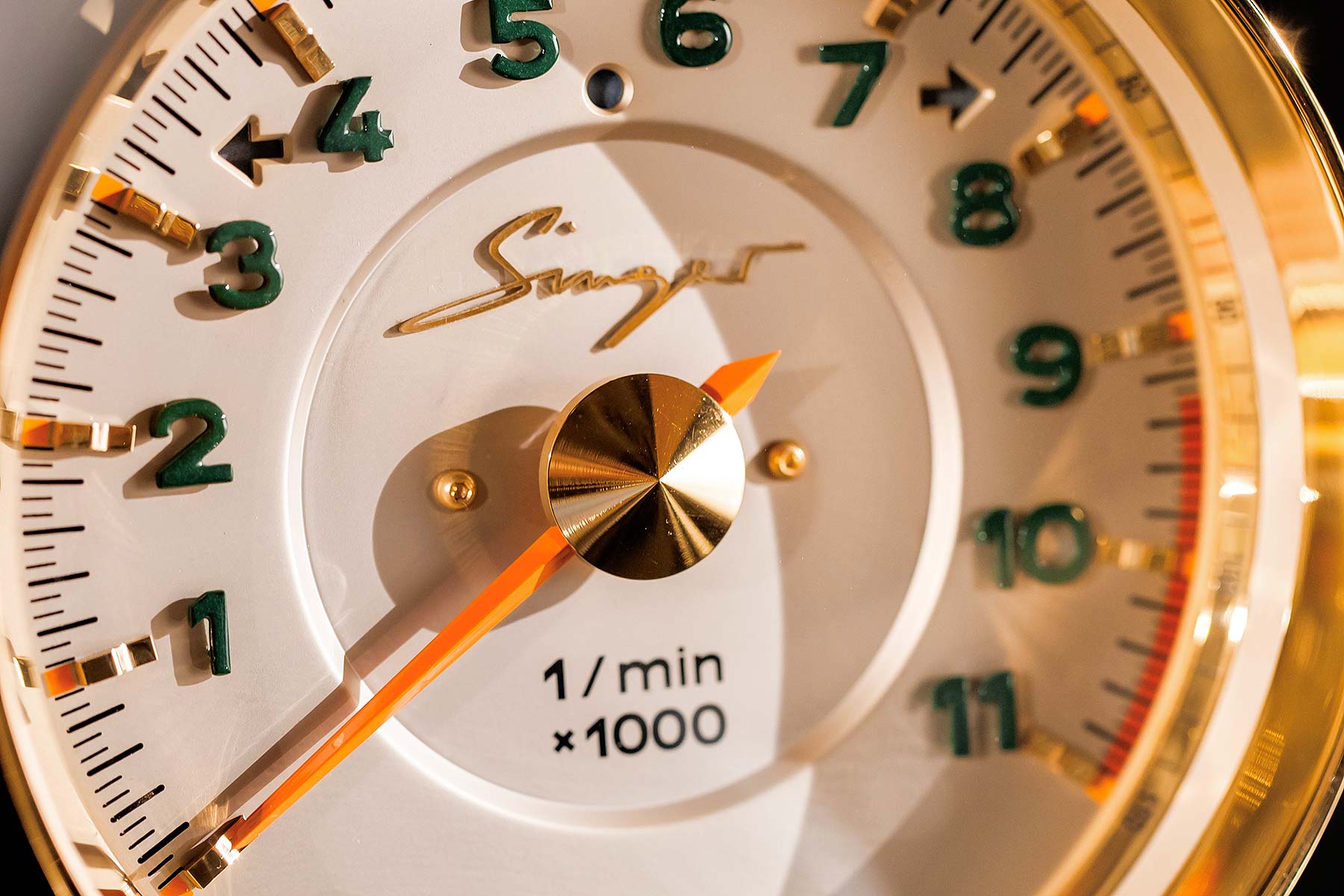 The car was commissioned back in November 2017 by Singer client Scott Blattner. He asked them to make his 964 a bit lighter and sharper, and the project went from there. Singer bought together all the technical partners, “strongly oriented toward lightweighting and dynamic gains,” and started work.

The result is the Parallax White Porsche 911 Reimagined by Singer DLS. A car so wonderful, it’s taking pride of place on Singer’s stand – and, amazingly, another one is going to give the car its dynamic debut by running up the Goodwood hillclimb. 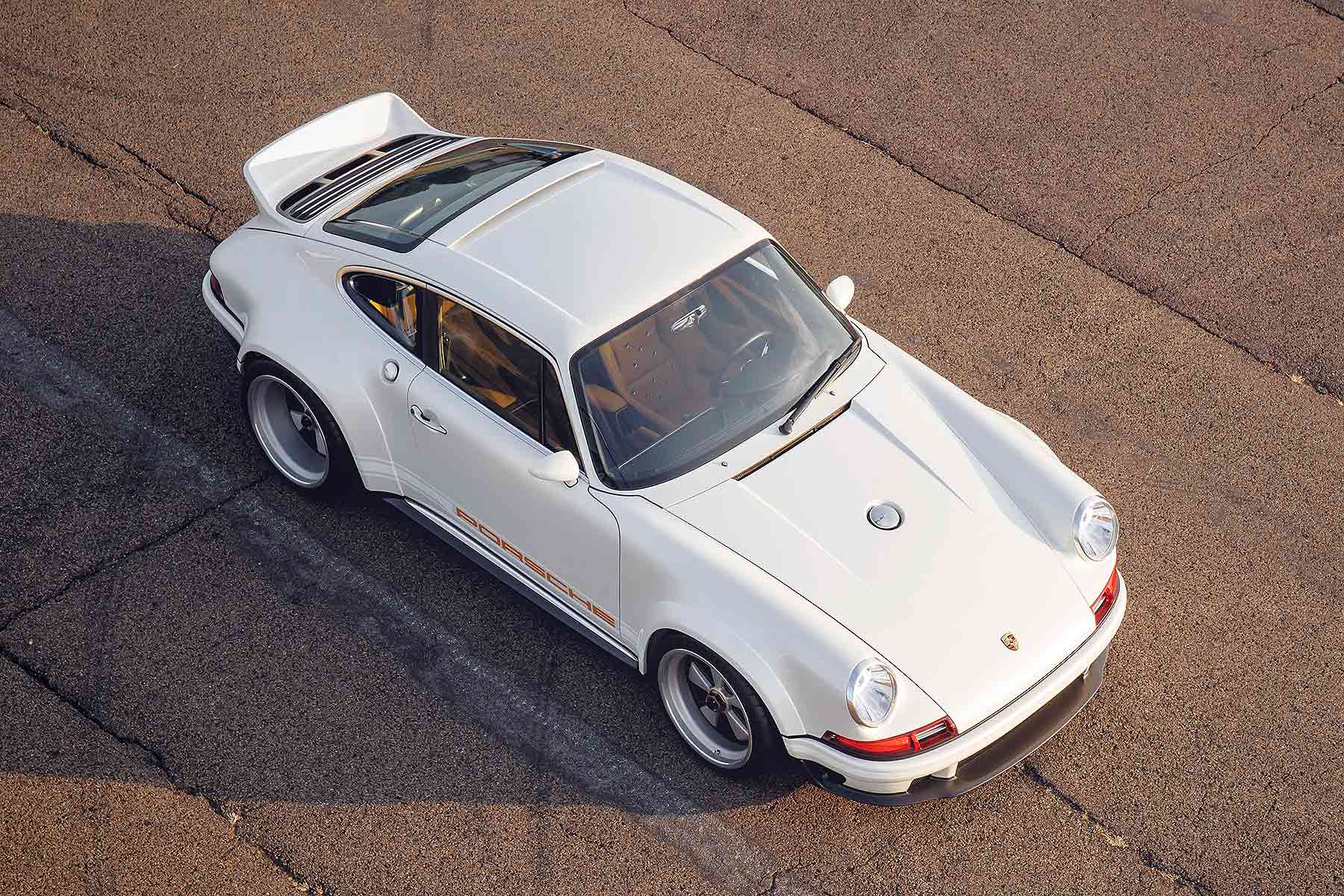 Just for good measure, there are a further six Singer-restored Porsche 911s on show outside Goodwood House, providing an alternative take on 70-year-old Porsche’s most famous model. And if you’re unable to travel to England to be at Goodwood, fear not: the Singer DLS will be at Monterey Car Week in the U.S. from 23 August.