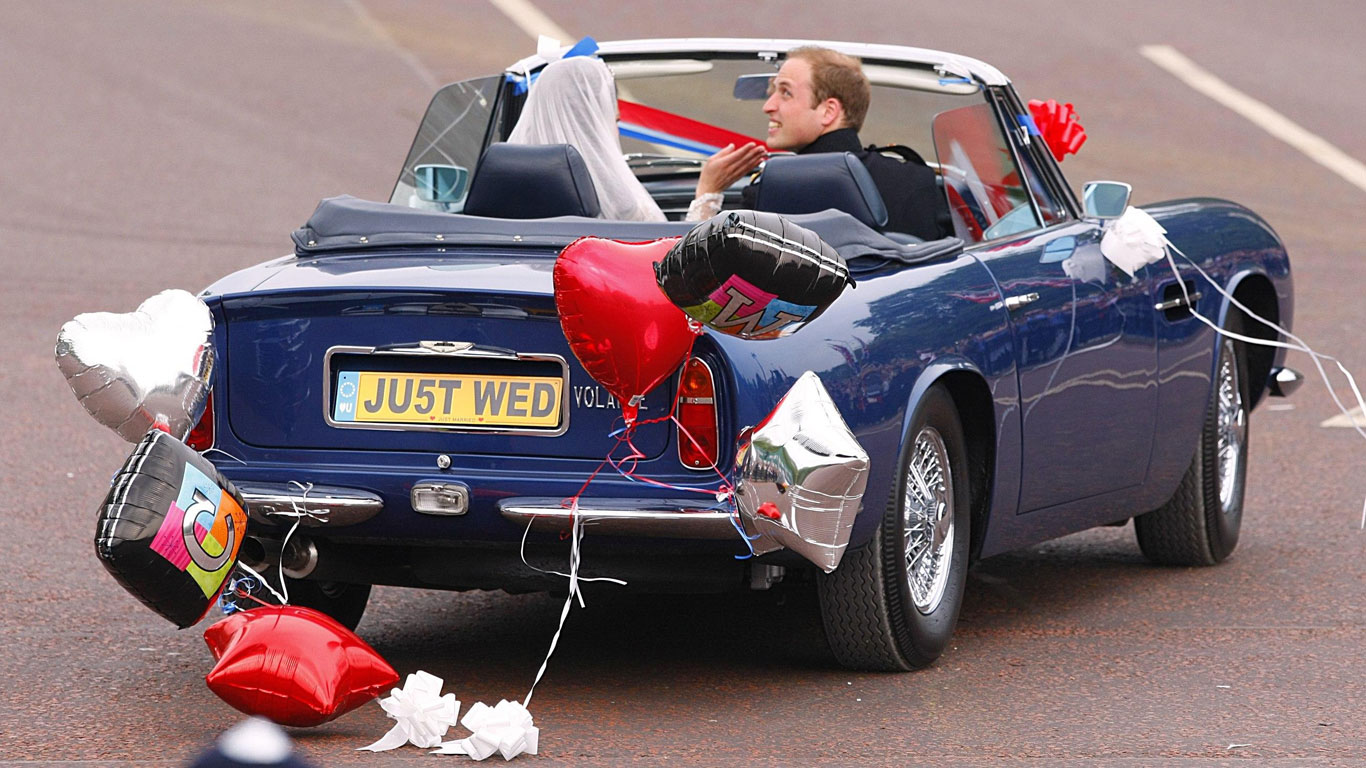 On 19 May 2018, all eyes will be on St George’s Chapel when Prince Harry marries Meghan Markle at Windsor Castle. The newlyweds are expected to embark on a two-mile tour of Windsor by carriage, before arriving at St George’s Hall for the first of two receptions.

But while a carriage sounds romantic, we’re more interested in the cars used to ferry guests to and from the ceremony. Here are some royal wedding cars from around the world. 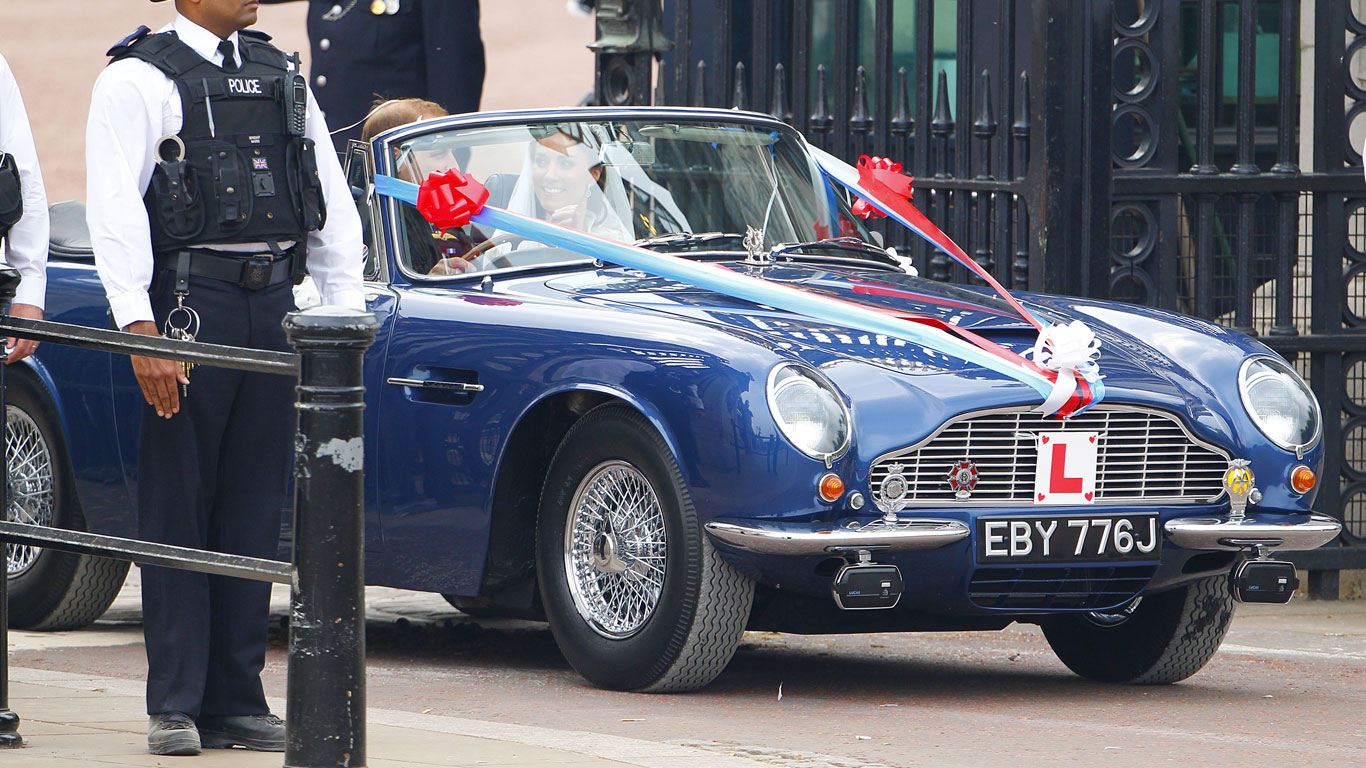 Forget Pippa Middleton’s dress, this was the star of William and Kate’s wedding. The happy couple used the Aston Martin DB6 Mk2 Volante – complete with ‘JU5T WED’ rear number plate – to travel from Buckingham Palace to Clarence House. The DB6 was a 21st birthday present from the Queen to Prince Charles, and it was William’s idea to drive his bride away from the official reception in the old Aston. 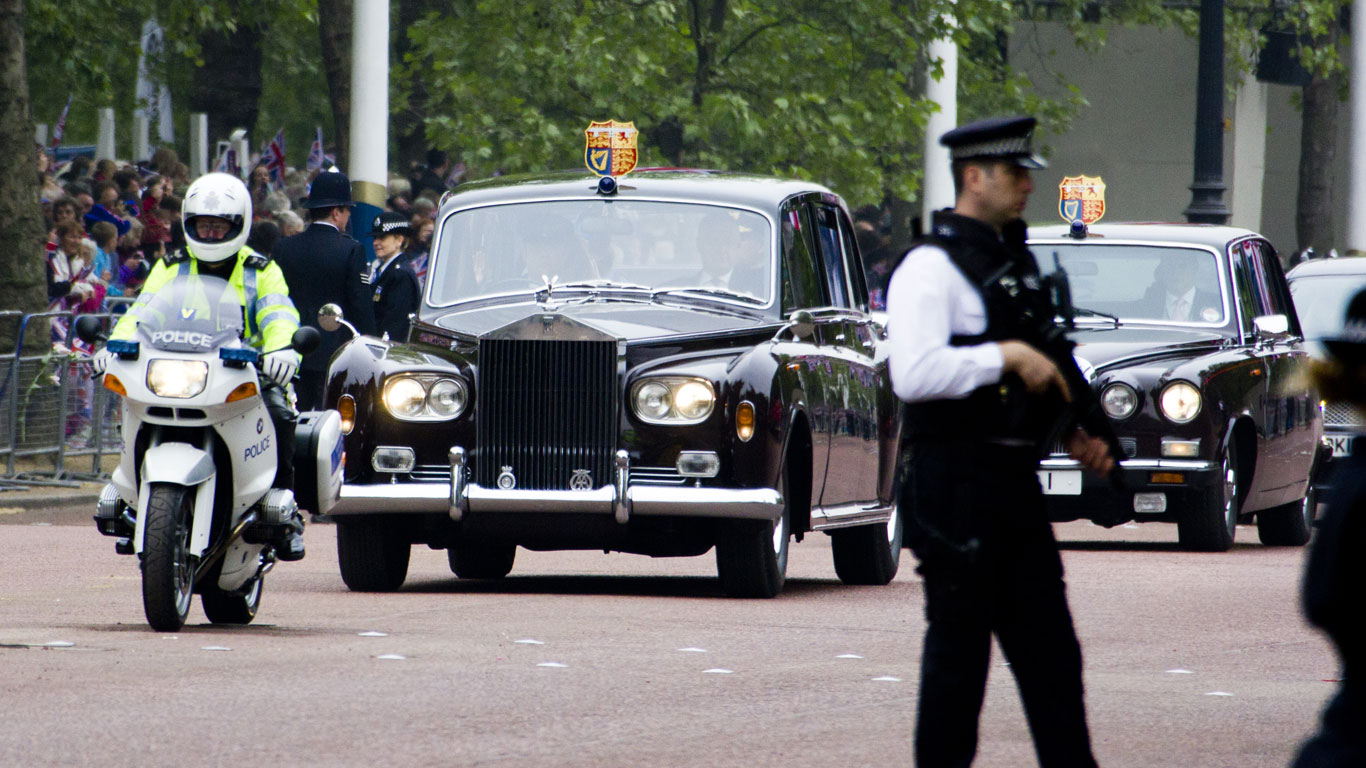 The Rolls-Royce Phantom VI was presented to the Queen for her Silver Jubilee. The seven-seat Roller features toughened glass and a custom-made silver model of St George slaying a dragon, fitted in place of the Spirit of Ecstasy. It was used by Kate and her father to travel to the church. 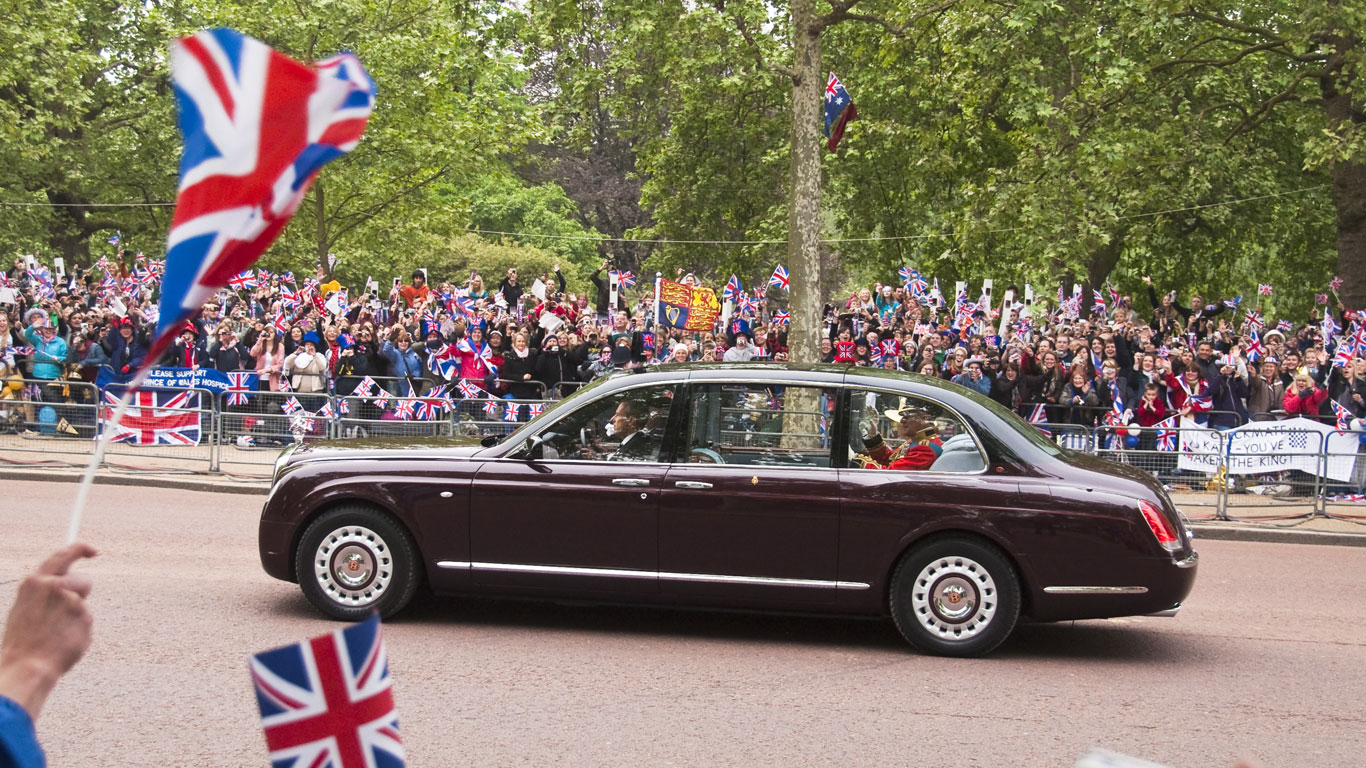 The Bentley State Limousine was presented to the Queen in 2002 to mark the 50th anniversary of her succession to the throne. It’s based on the Arnage, but Mulliner extended the wheelbase to make more room for passengers in the back, while it’s also wider and taller than a production Arnage, to allow the Queen to enter and exit the vehicle in a dignified manner. The Queen and the Duke of Edinburgh used the cosmetically-challenged Bentley for William and Kate’s wedding. 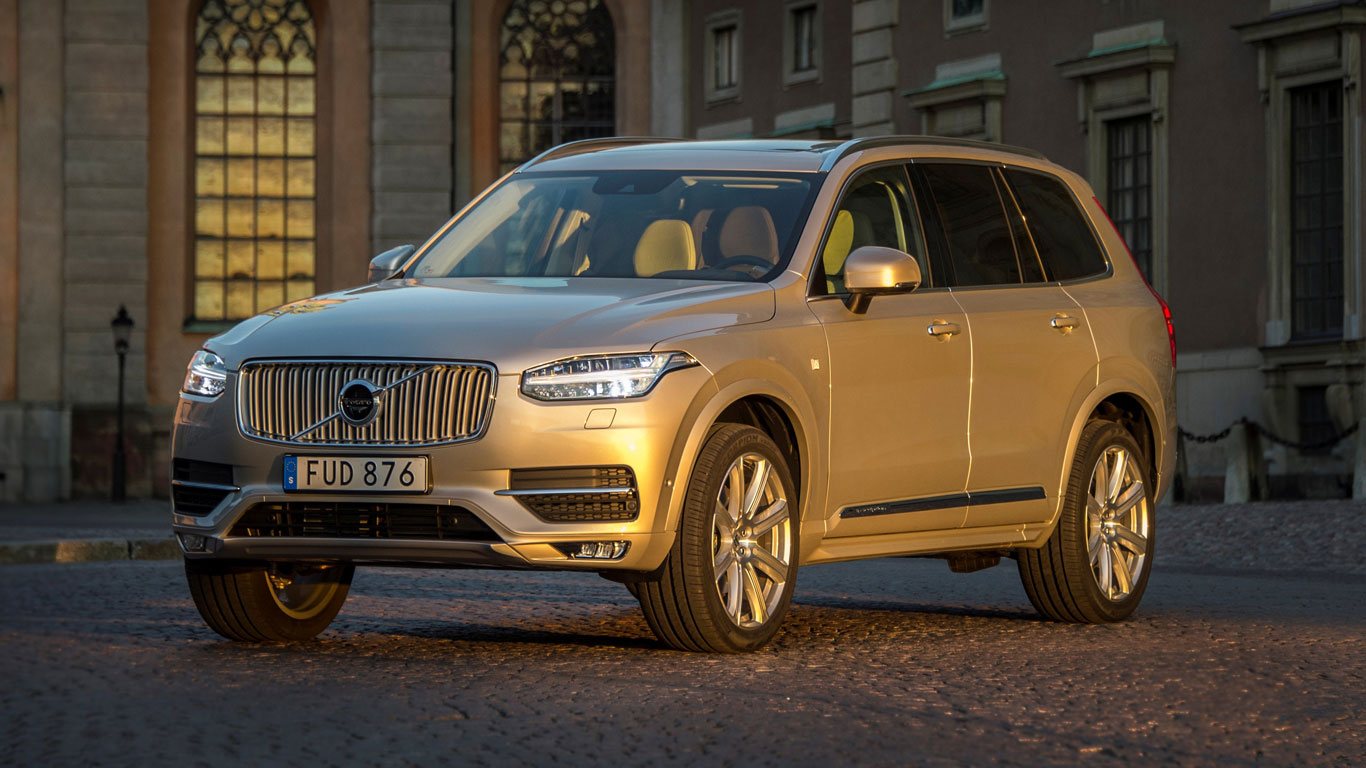 We continue our royal tour of the world in Sweden, specifically the wedding between Prince Carl Philip and Sofia Hellqvist in 2015. Guests were chauffeured from airports and hotels to the ceremony in Slottskyrkan in a fleet of Volvo XC90 courtesy cars, each one finished in Luminous Sand paint. 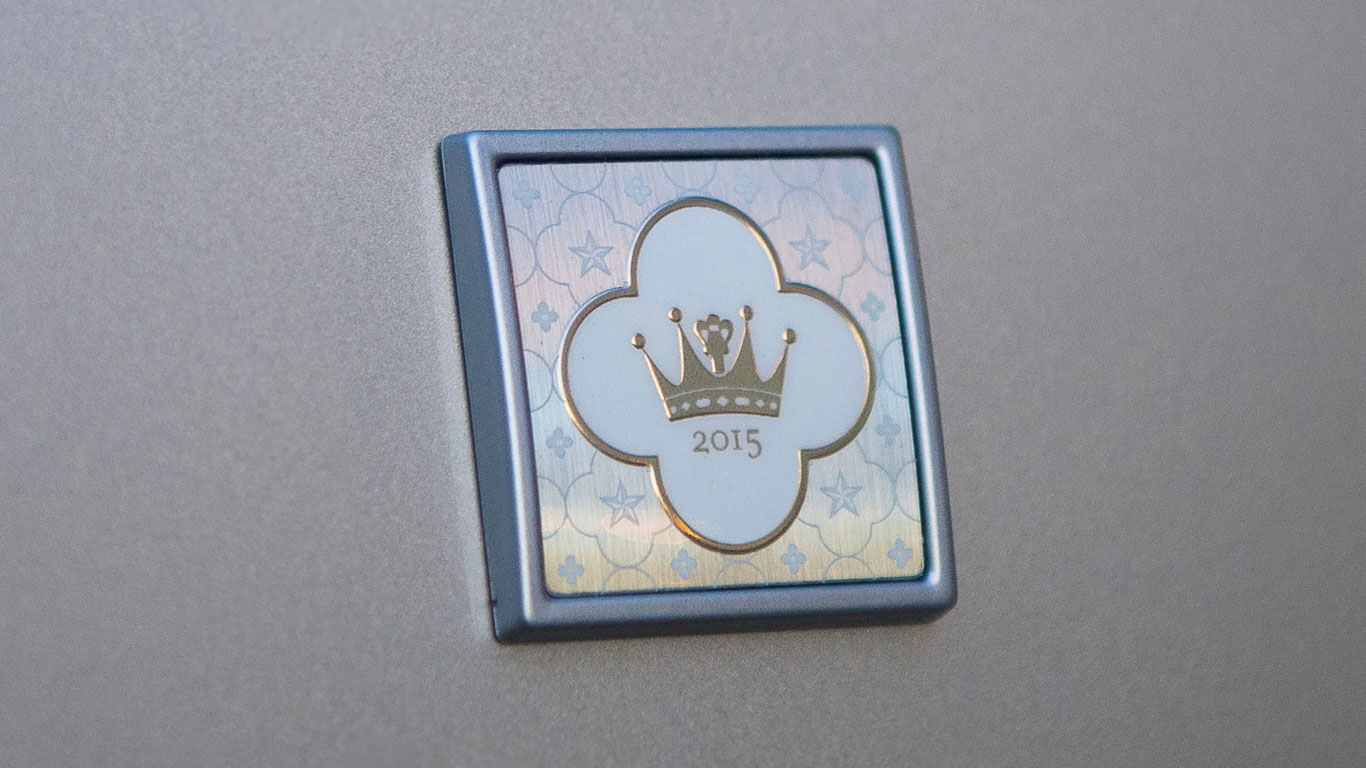 Prince Carl Philip is a keen racing driver, having inherited his love of cars from his great-uncle and godfather, Prince Bertil. According to Royal Central, he has been known to drive his cars at such high speeds that his security detail has trouble keeping up. For his wedding to Sofia Hellqvist, Volvo supplied 35 XC90 D5s with special badges to mark the occasion. After the event, the cars were made available for purchase. 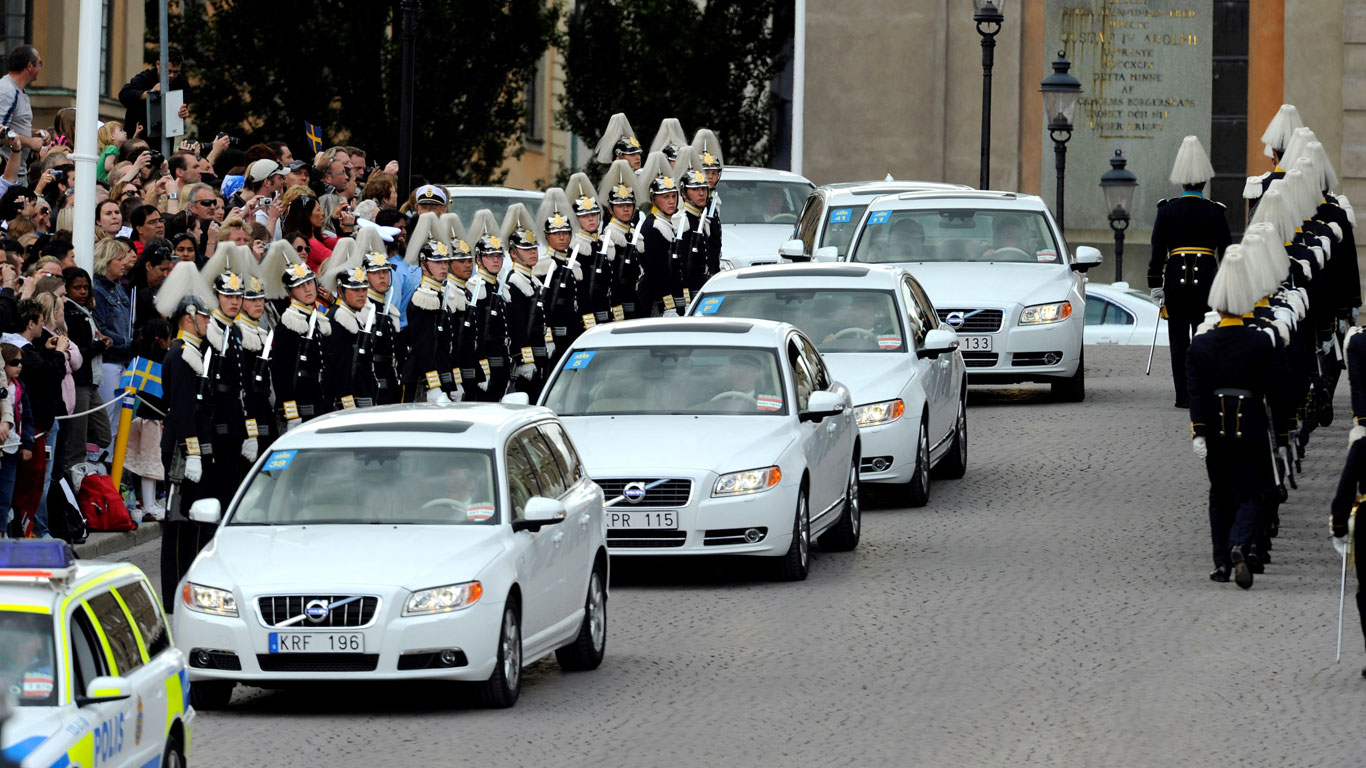 Volvo has a history of supplying cars to the Swedish royal family. In 2010, guests attending the wedding between Crown Princess Victoria and Daniel Westling travelled in specially-designed S80 and V70 models, each one finished in sparkling white livery. 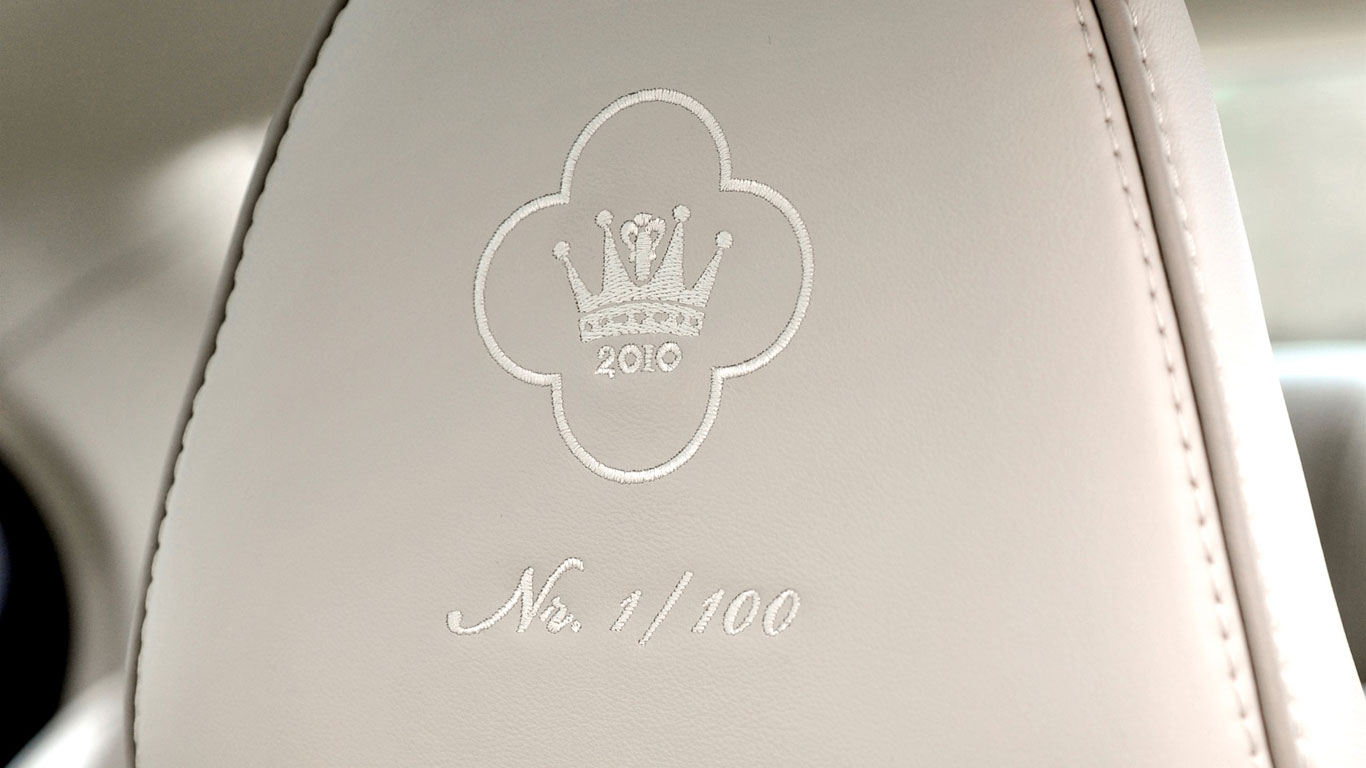 Once again, Volvo marked the occasion with the royal wedding insignia on the side of the cars, which was also found on the leather upholstery, embedded in the numbered headrests. The design – which was approved by the royal couple – was repeated on a number of other details, such as the sill covers. 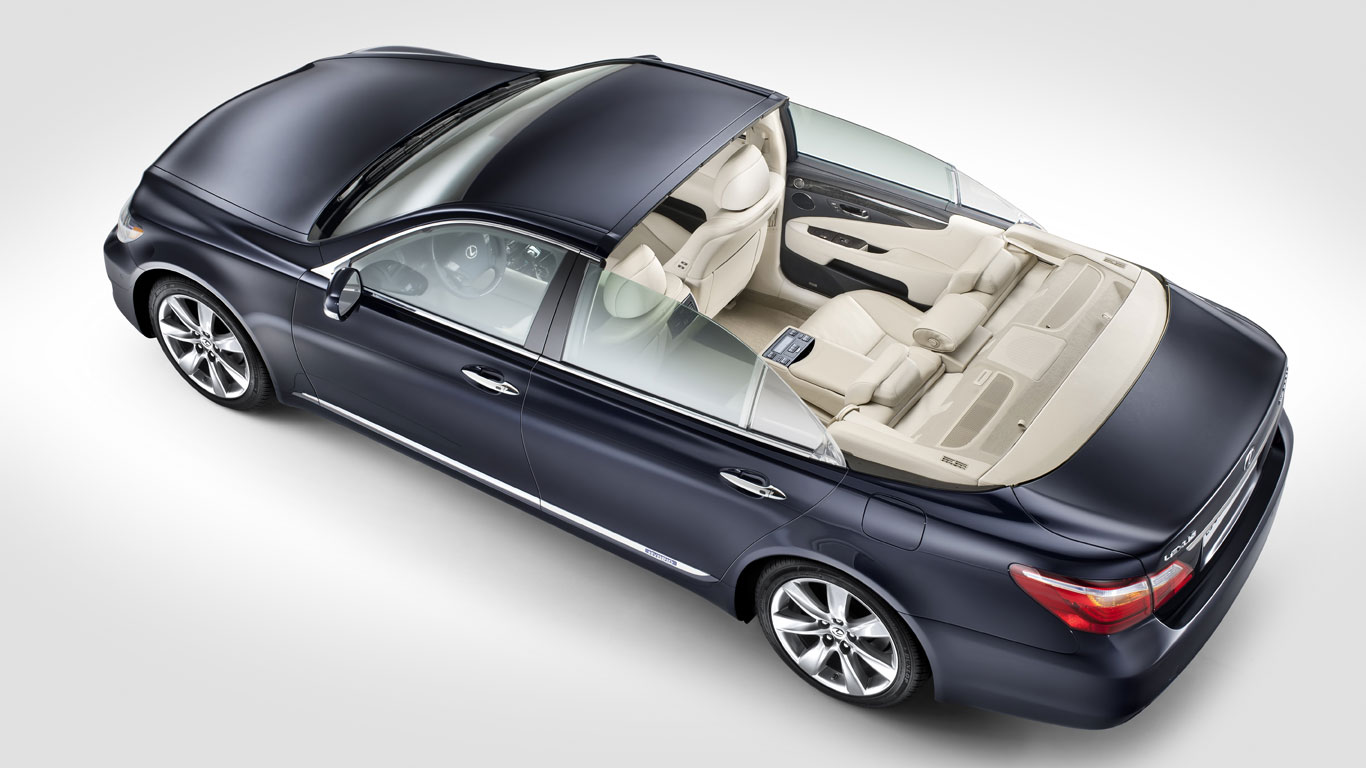 Lexus built a unique LS 600h Landaulet with a one-piece transparent polycarbonate roof to serve as the official royal wedding car of Prince Albert of Monaco and Charlene Wittstock. The conversion was carried out by Belgian coachbuilder Carat Duchatelet, with the project taking more than 2,000 hours to complete. According to Lexus, the roof presented the biggest challenge, being a single piece with no reinforcements or pillars. 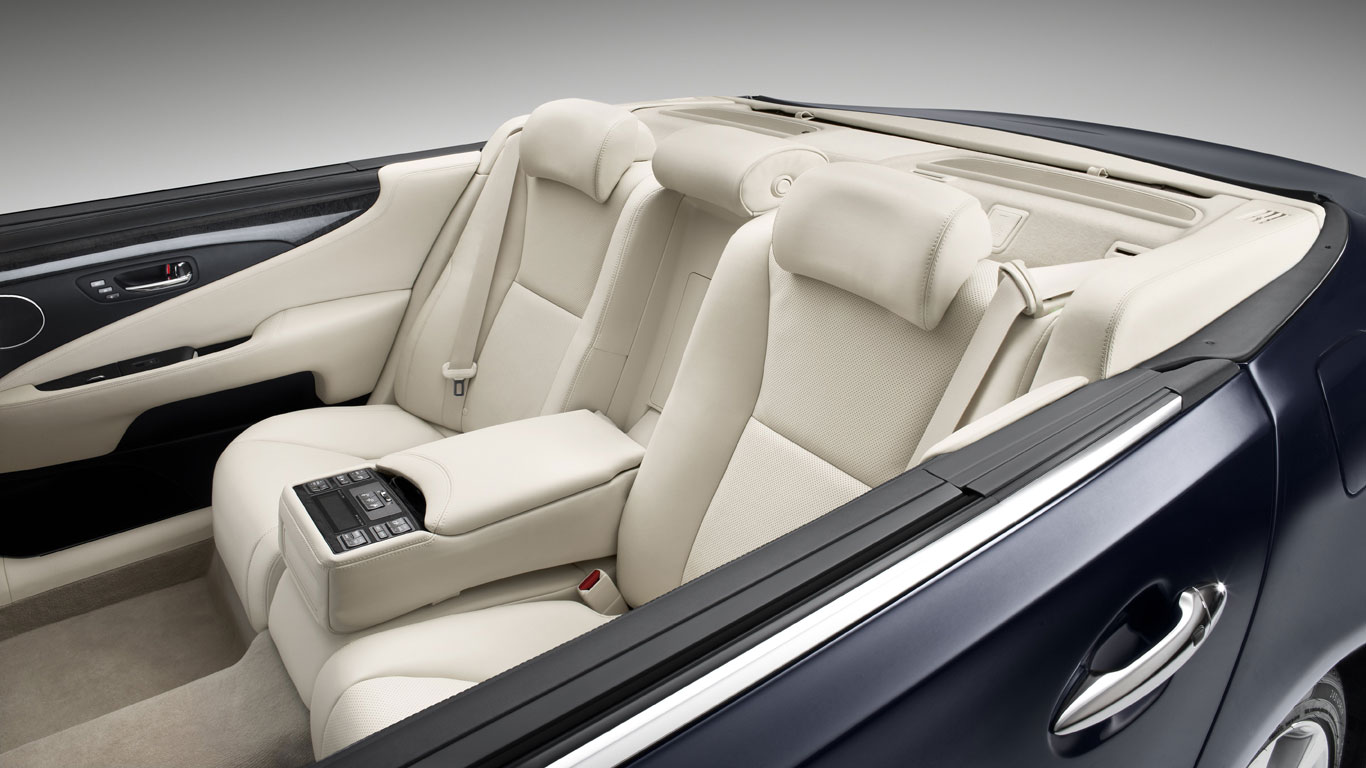 The hybrid powertrain allowed the happy couple to waft along the streets of Monte Carlo in full-electric mode, with zero tailpipe emissions. Prince Albert and his bride sat in the back of the Midnight Blue Lexus, beneath an 8mm thick roof weighing just 26kg. 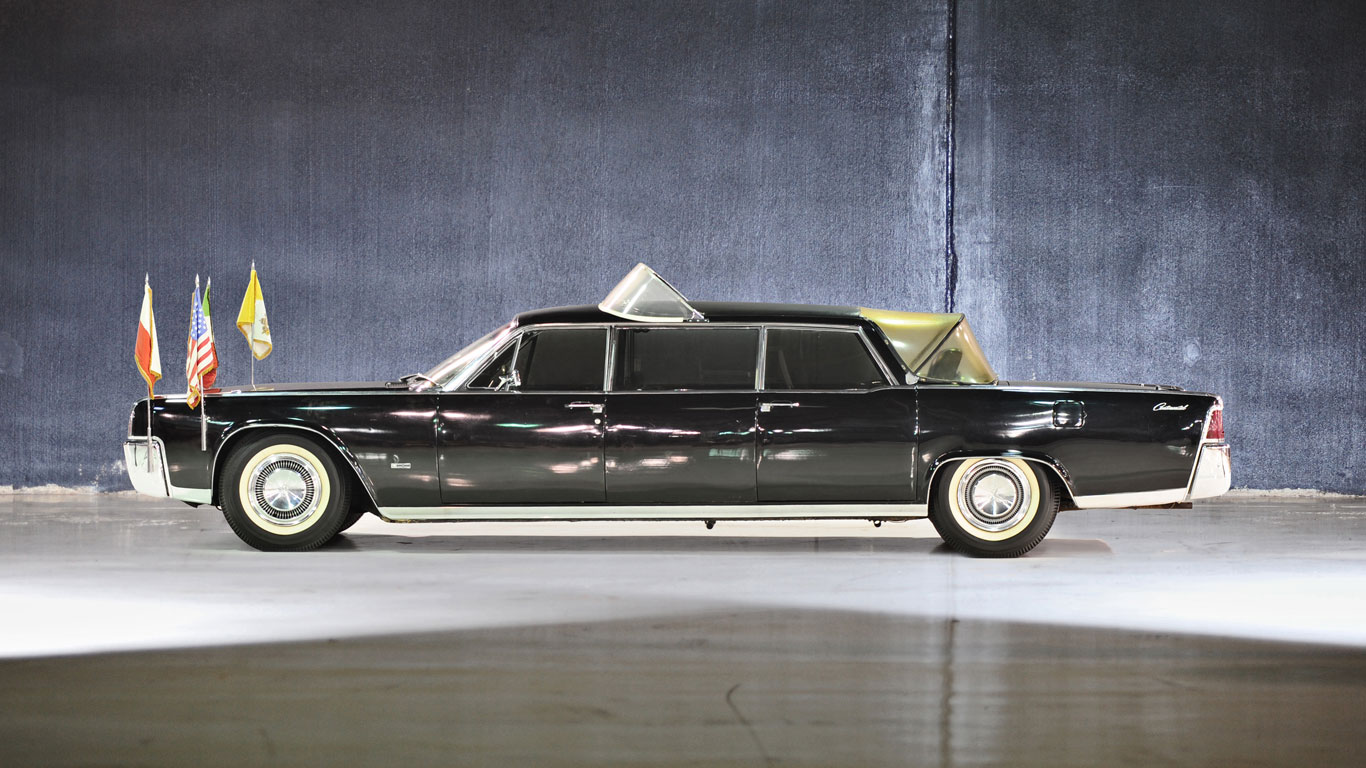 The Lincoln Continental is more associated with presidential motorcades than wedding days, but the luxo-American car has carried more happy couples than you might think. Back in 1968, a Continental was the choice of transport when the King of Norway arrived at Oslo Cathedral with his future daughter-in-law Sonja Haraldsen. A 1961 Lincoln Continental was also used by Crown Prince Hamzah of Jordan and his bride at their wedding in 2012. The picture shows a Continental adapted for Pope Paul VI, and the Chicago parade vehicle for the Apollo 8, 11, 13 and 15 astronauts. In 2011, it sold at a Bonhams auction for £155,167. 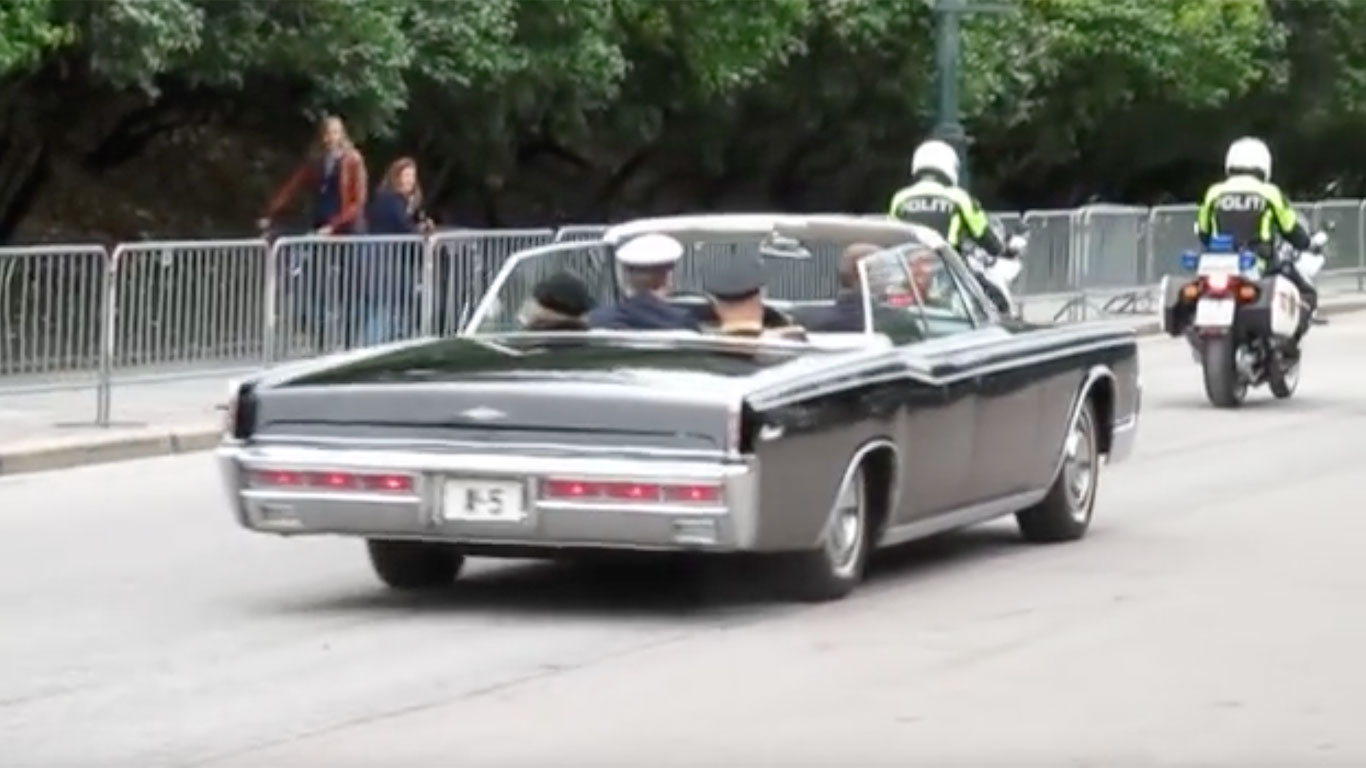 Amazingly, the Norwegian royal family have remained fiercely loyal to the Lincoln Continental. Here, we see the King of Norway returning to the Royal Palace from a parliament visit in 2011. Incidentally, the 1966 Lincoln Continental used for the 1968 royal wedding was used once again when the Crown Prince Haakon married Mette-Marit in 2001. 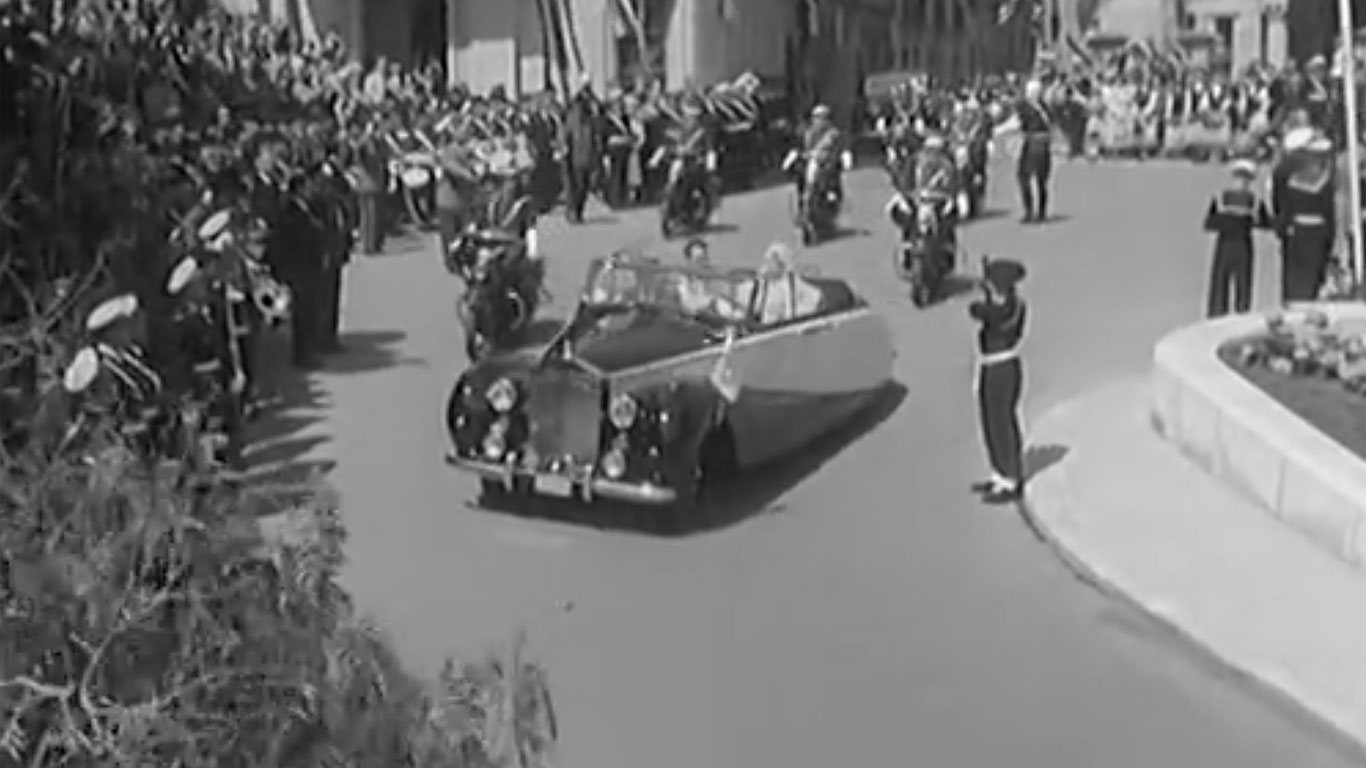 It was one of the most high profile events of 1956. In the Monaco sunshine, Hollywood icon Grace Kelly arrived in a Rolls-Royce Silver Wraith to marry Prince Rainier III, before embarking on a tour of Monte Carlo in the open-top car. 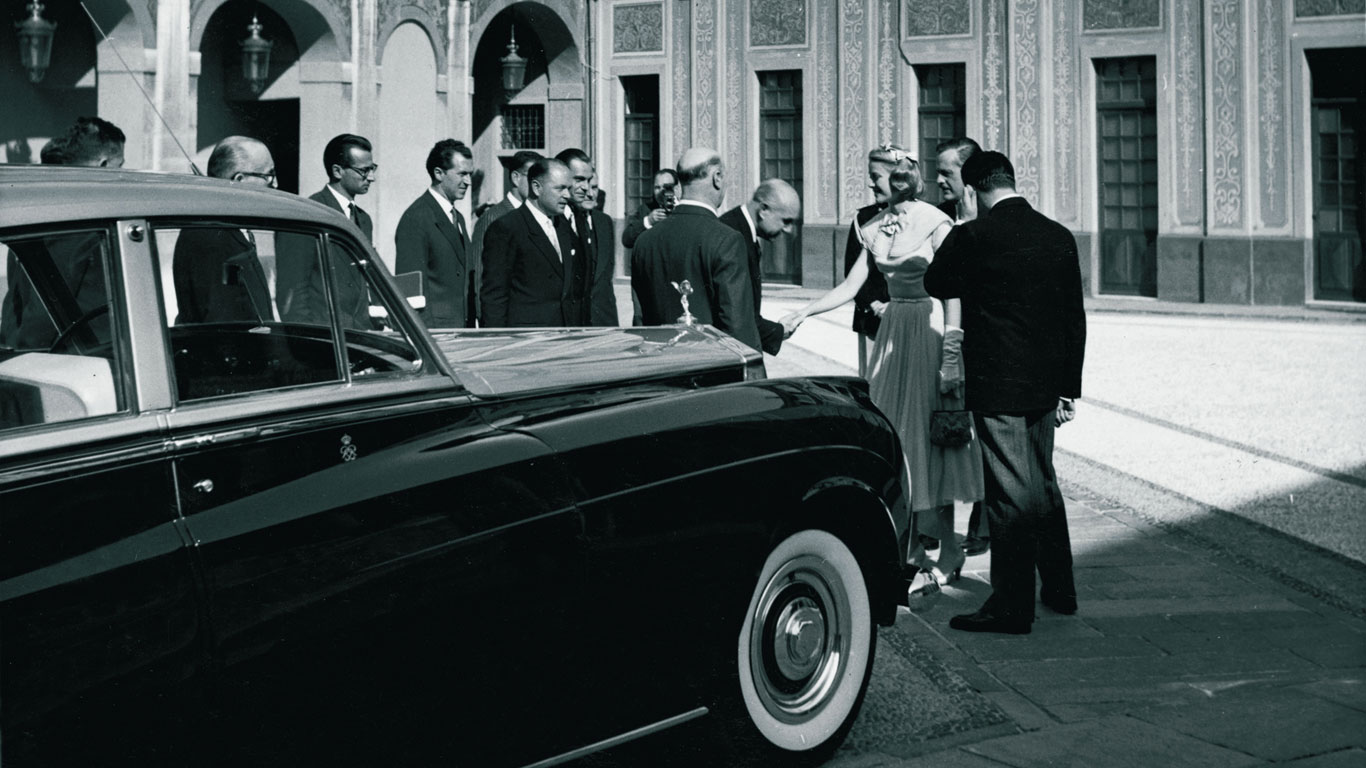 Needless to say, the Prince and Princess of Monaco were showered with gifts from all over the world; “presents from kings and queens, presidents and commoners, movie magnates and millionaires,” reported British Pathé. But this was arguably the best gift of all: a Silver Cloud, presented by Rolls-Royce. 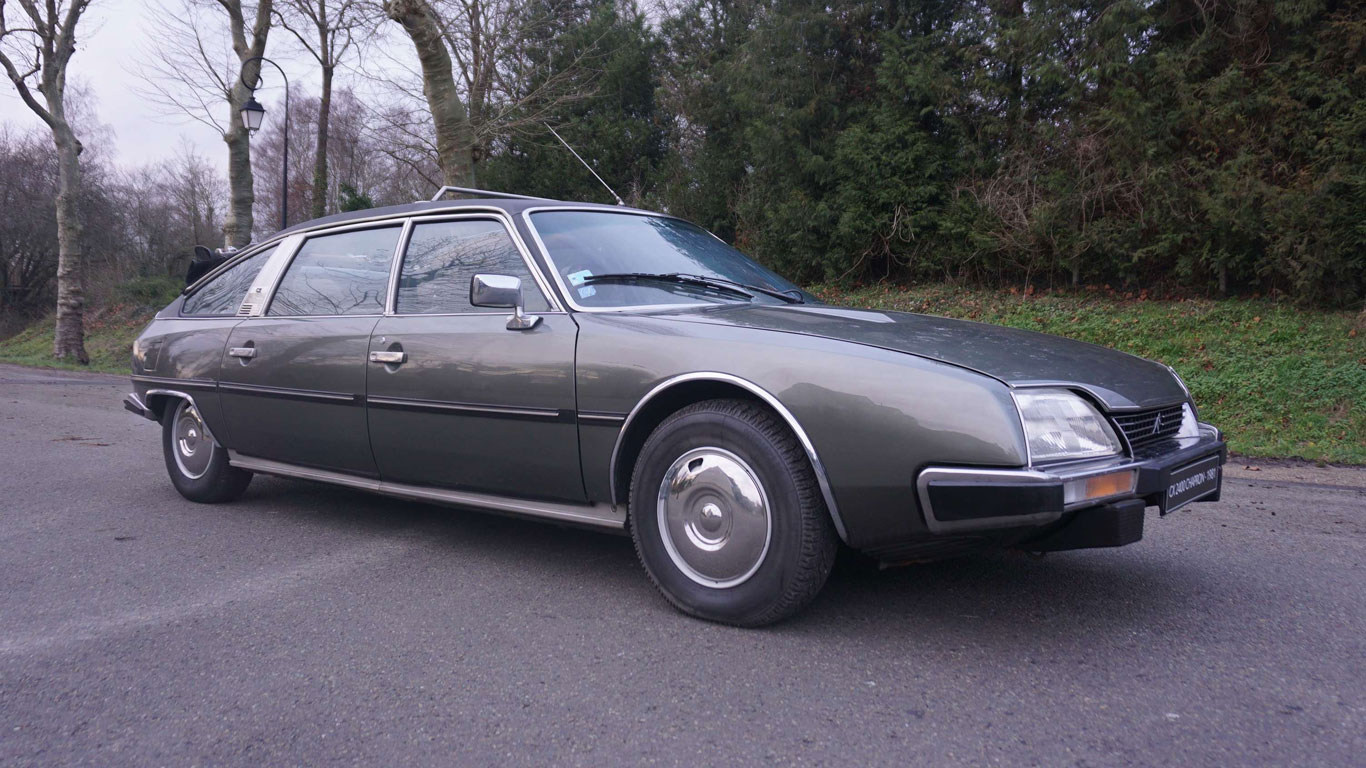 This Chapron-built CX Prestige Landaulet was unveiled at the 1980 Paris Motor Show and ordered by Citroen for use by VIPs. It was used for the wedding between Henri, Grand Duke of Luxembourg and Maria Teresa, Grand Duchess of Luxembourg. In 1991, it was sold to a Parisian Citroen dealer and, in 2018, it sold for €95,360 at an Artcurial auction. 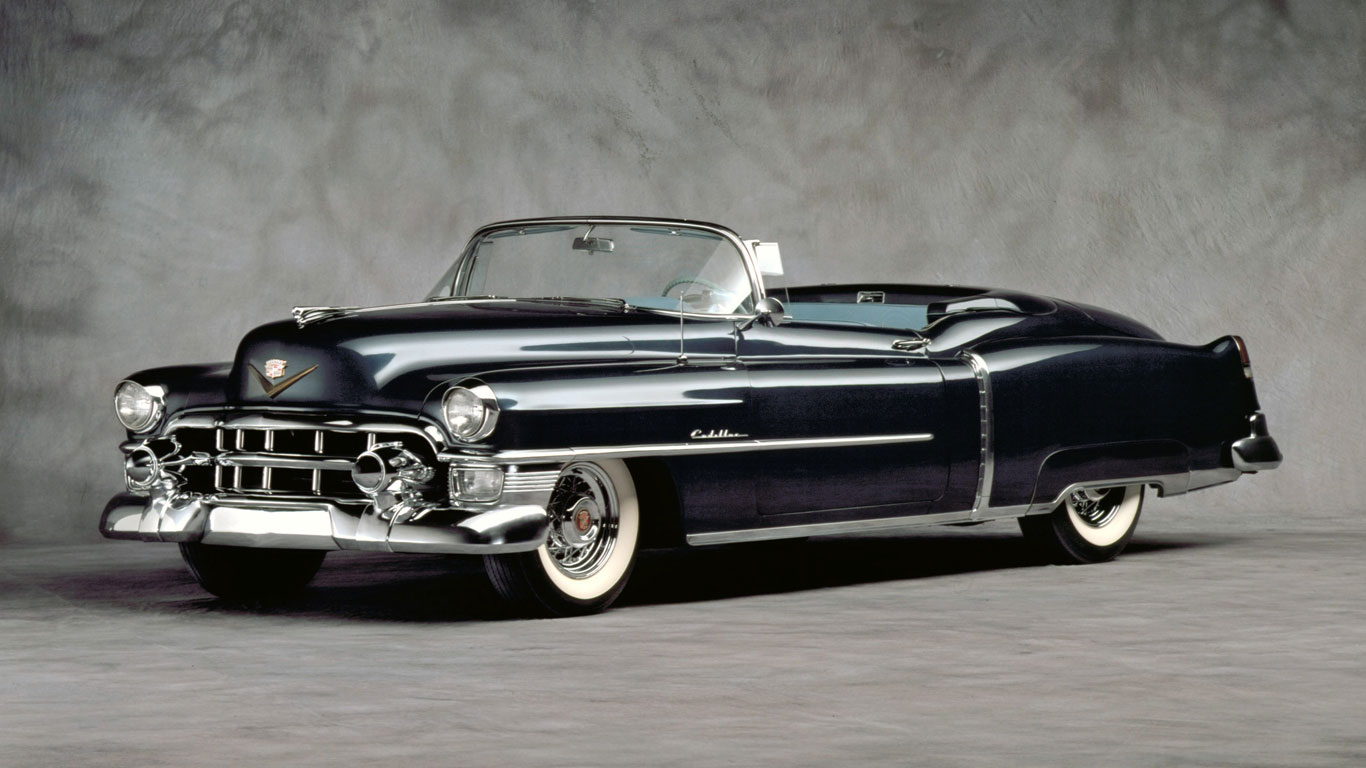 In 1960, King Baudouin married Dona Fabiola de Mora y Aragón in Brussels. The bride drove from the Royal Palace to the Cathedral of St Michael and St Gudula in a 1955 ‘bubble top’ Cadillac Series 62, similar to the car featured here, albeit without the transparent roof. 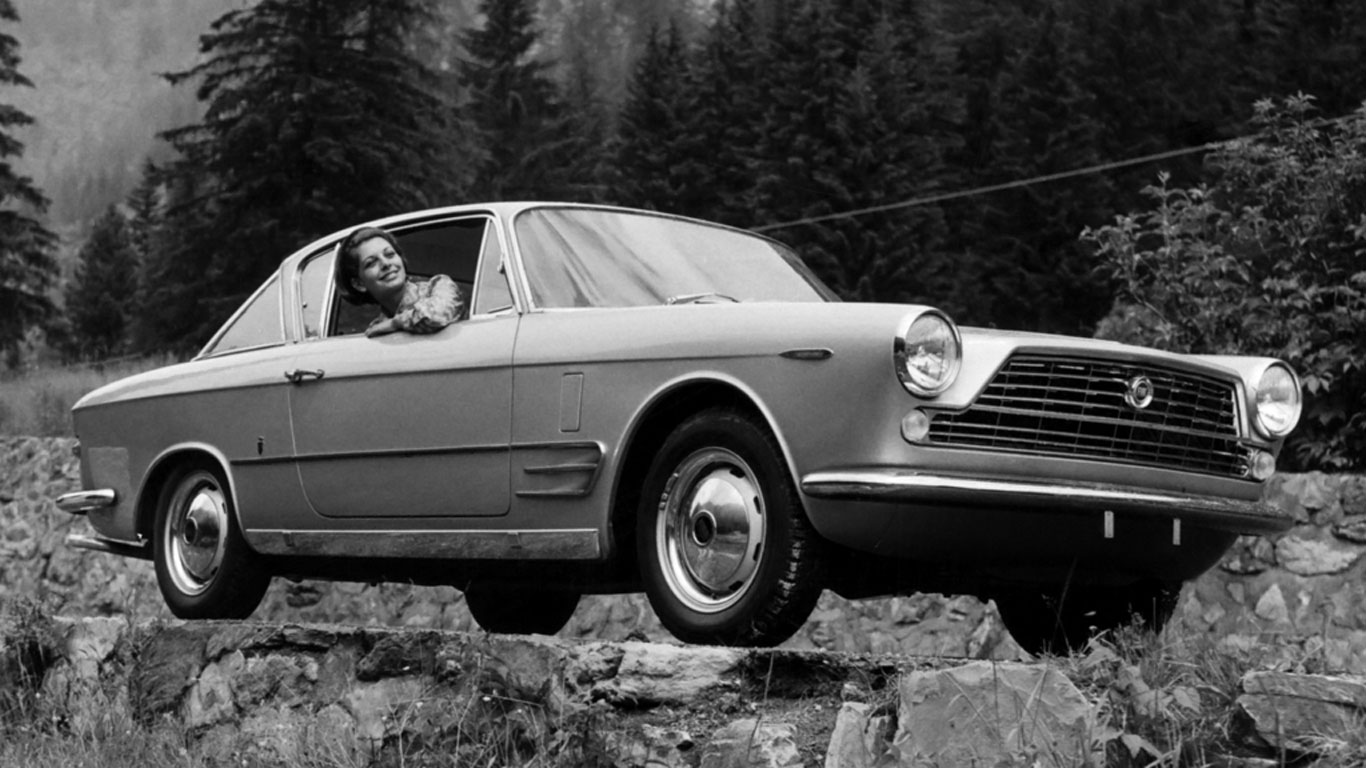 Not strictly a royal wedding car, but a Fiat 2300 S Coupe similar to this was presented to Princess Beatrix of the Netherlands and Prince Claus following their wedding in 1966. 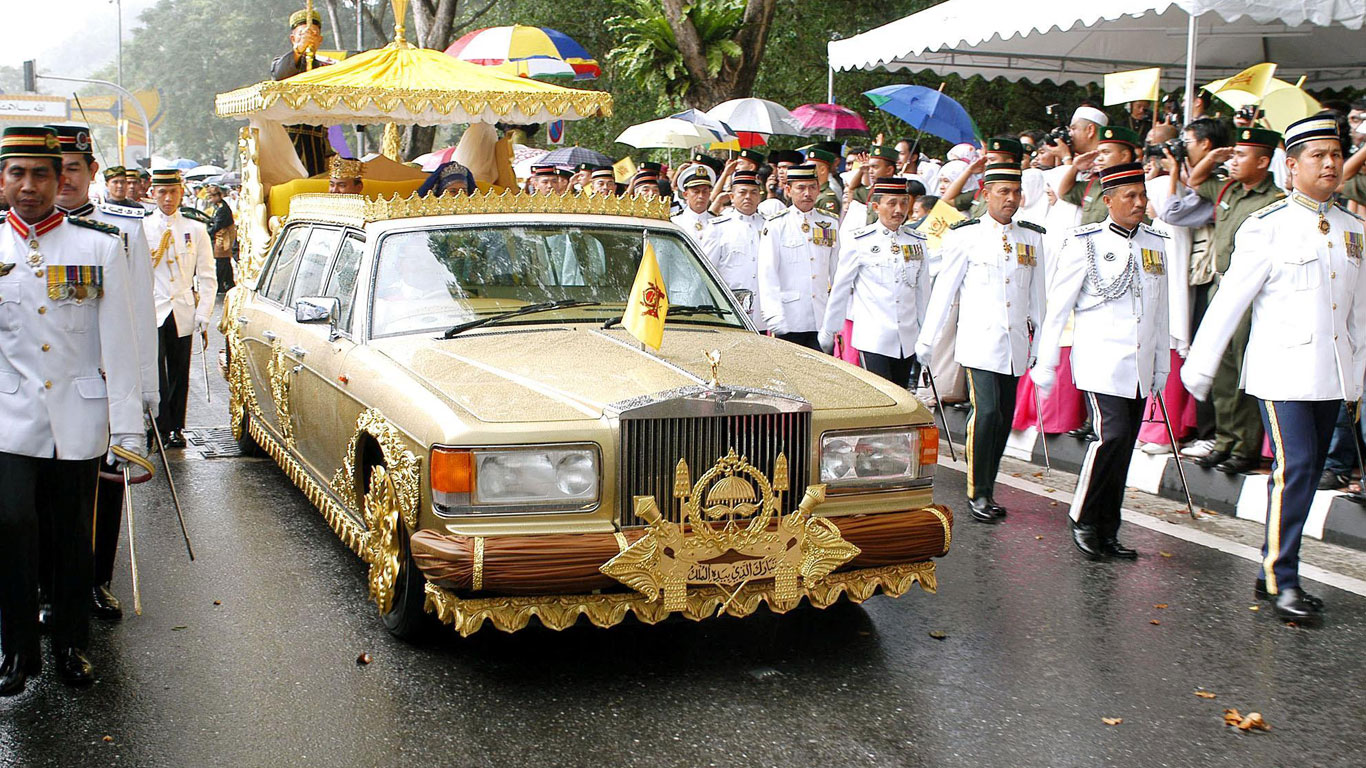 The Sultan of Brunei is famous for his love of cars, laying claim to a collection worth more than $4 billion. At a cost of $14 million, this custom-built Silver Spur limo is one of the most eye-catching, not to mention expensive, cars in the Sultan’s collection. And, yes, that is 24-carat gold plating. When his son, Prince Al-Muhtadee Billah, married in 2014, he embarked on a five-mile parade across Brunei’s capital. 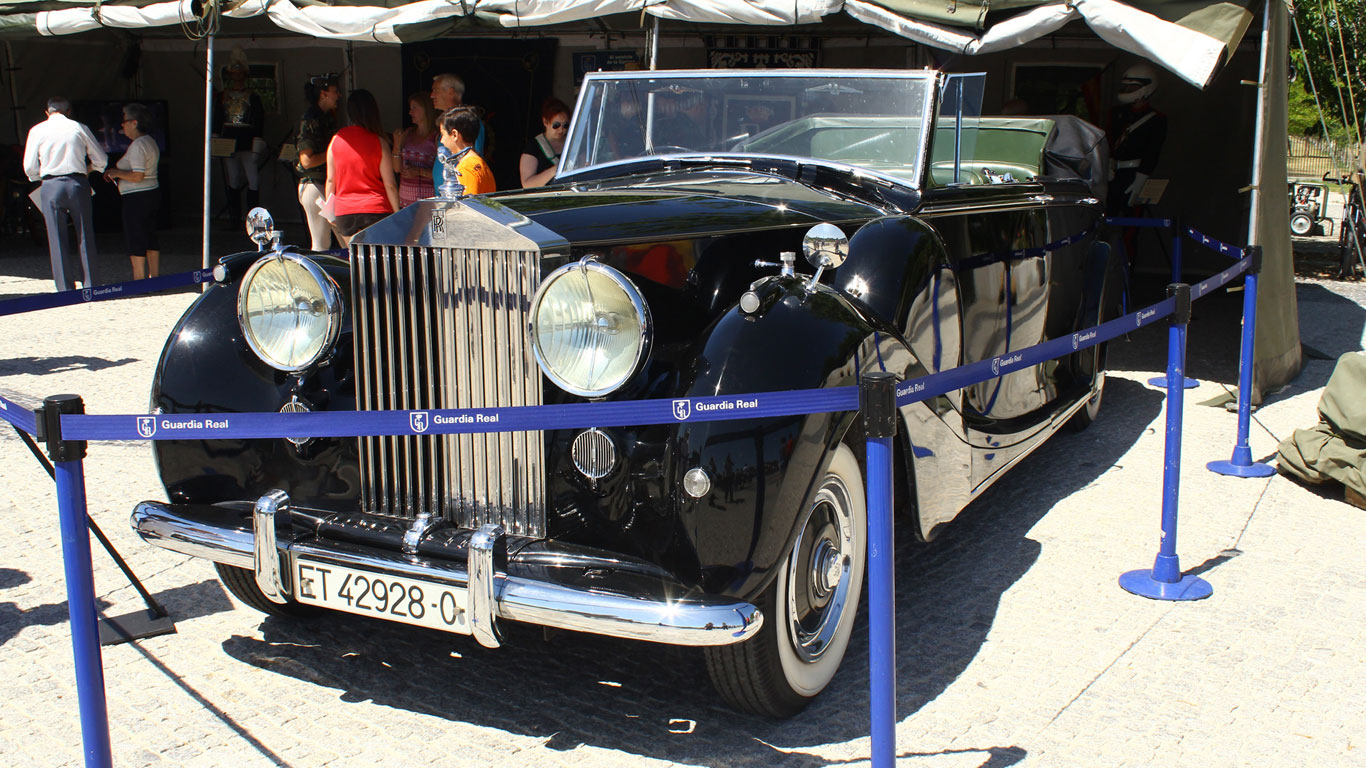 The former Spanish dictator, Francisco Franco, ordered three armoured Phantom IV models from Rolls-Royce: two limousines and one drophead. The cars are now the property of the Spanish Army and are used for ceremonial purposes, such as the wedding of Princess Infanta Cristina and Inaki Urdangarin in 1997. In 2017, Urdangarin, the king’s brother-in-law, was found guilty of fraud and corruption, and sentenced to six years and three months in jail. 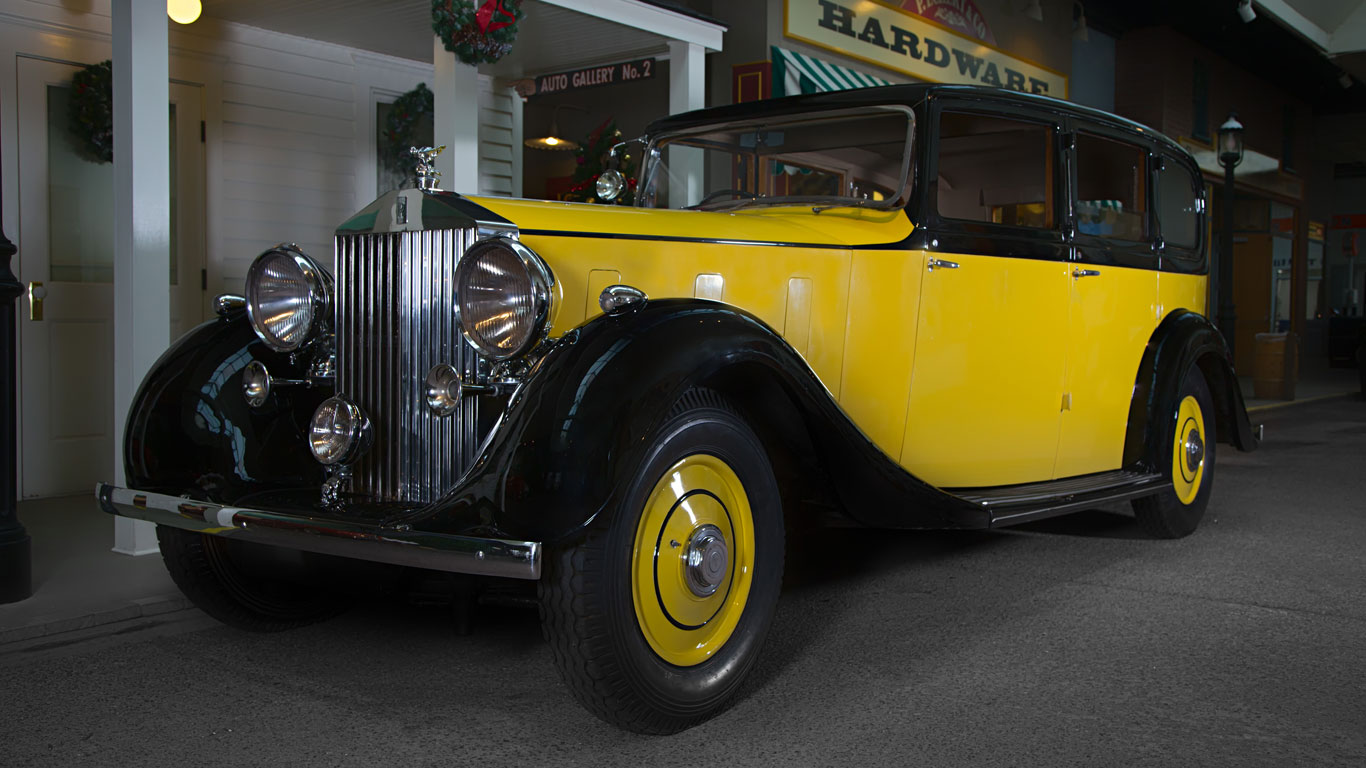 In 1949, the Earl of Harewood, the Queen’s cousin and a grandson of King George V, married Miss Marion Stein, an Austrian Jew who had fled to England in 1938. The King and Queen travelled down from Balmoral to attend the ceremony in Mayfair, with Miss Stein and her father arriving in a Rolls-Royce Phantom III 40/50hp Enclosed Limousine, which sold at a Bonhams auction in 2014 for just £25,606.

Rolls-Royce at the Royal Mews 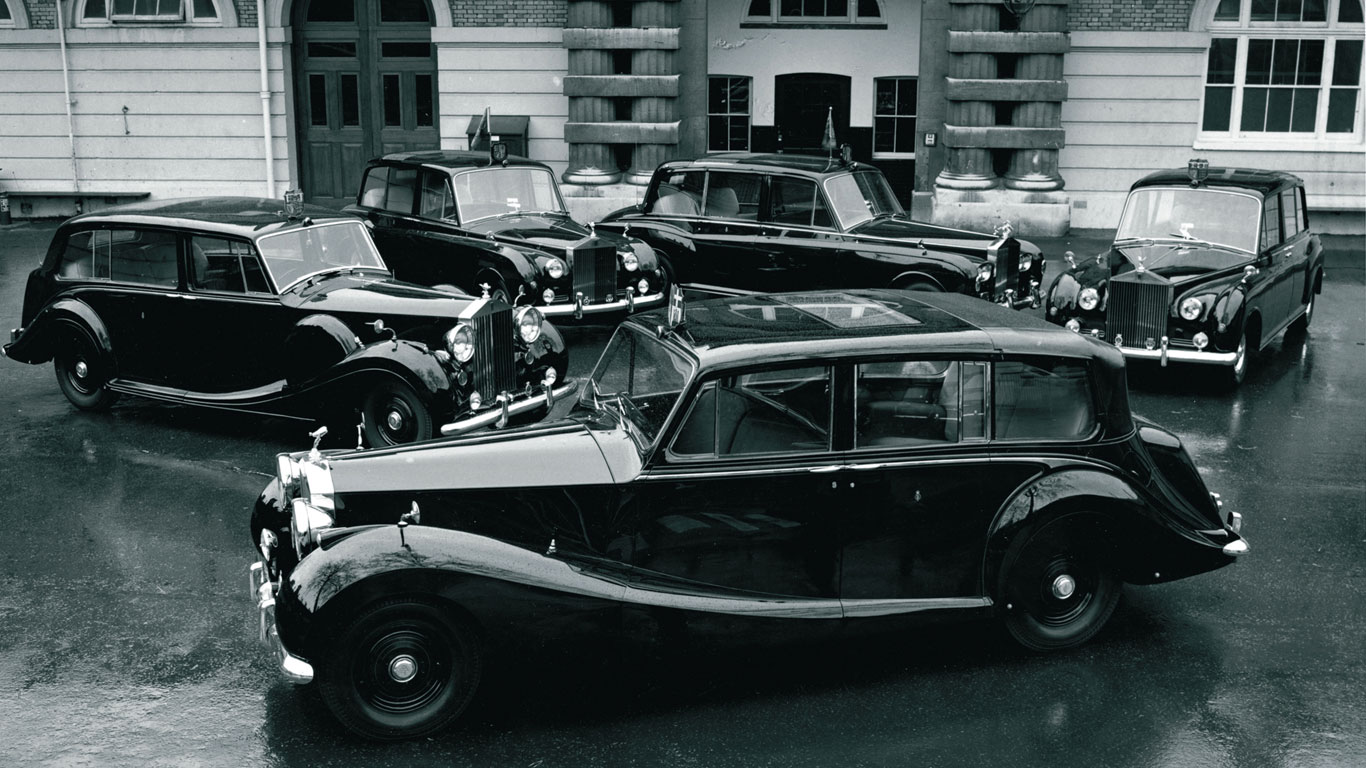 We conclude with a selection of Rolls-Royce motor vehicles parked outside the Royal Mews. Now, it’s over to Prince Harry and Meghan Markle to add to the list of cars used for royal weddings.