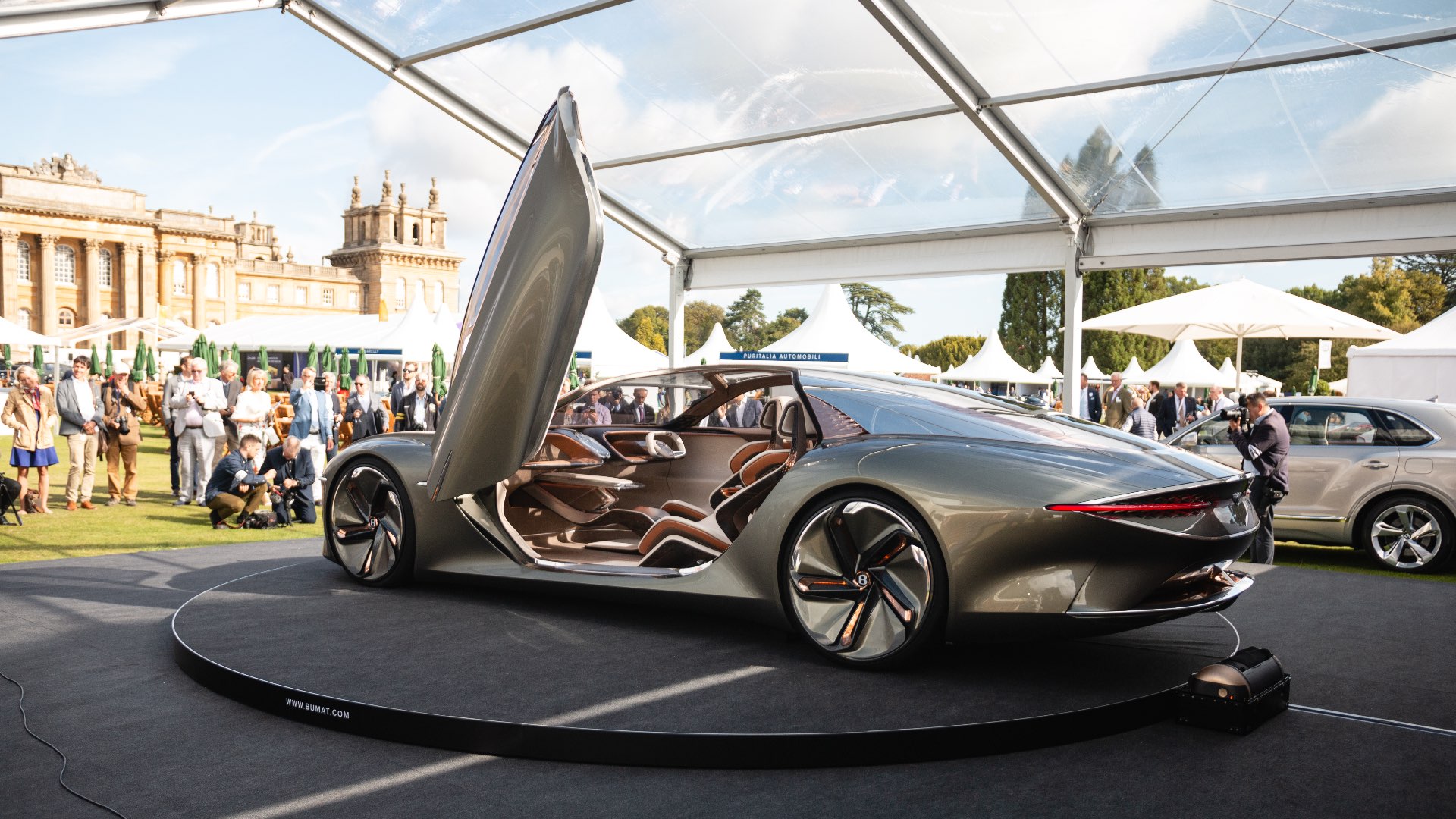 Exotic, exclusive and expensive, Salon Privé is the UK’s A-list supercar show, held on the manicured lawns of Blenheim Palace. This year, no less than 11 vehicles made their UK debuts, from a Slovenian supercar to a resurrected vintage Bentley. We donned our best suits and selflessly quaffed free champagne to bring you the highlights.

Read on for details of all 11 debuts at Salon Privé 2019, plus an MR-exclusive photo gallery. 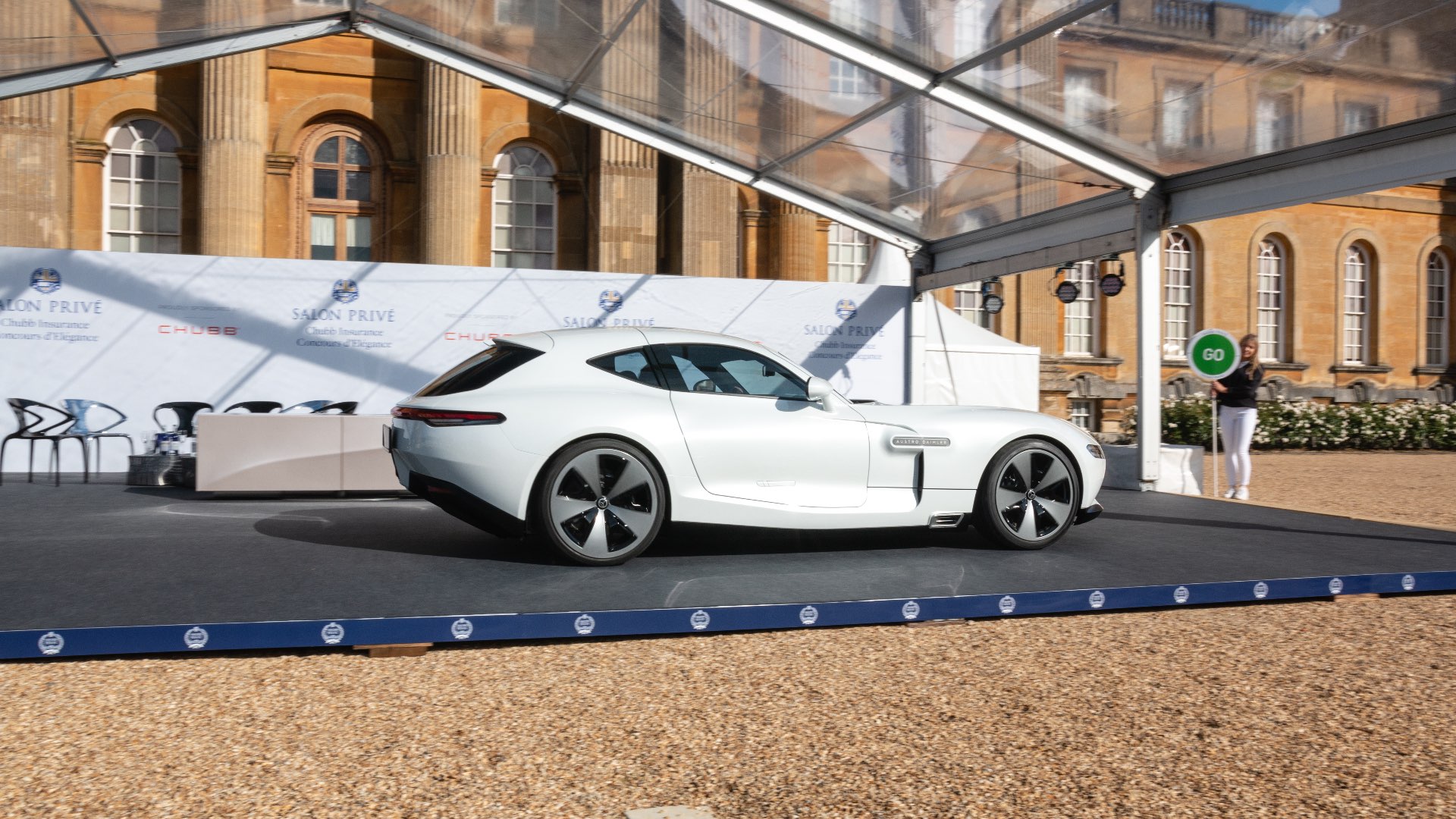 Try saying “Austro Daimler Bergmeister ADR 630 Shooting Grand” after a couple of glasses of Krug. Back in 1910, Austro Daimler built the world’s fastest car – the 85mph Prinz Heinrich – but the company closed its doors in 1931. Fast-forward nearly 90 years and it’s back, this time attached to a plug-in hybrid loosely based on the Mercedes-AMG GT.

A 1,181hp hybrid with gullwing doors, based on the AMG GT. pic.twitter.com/YUnmNOyYIG

The styling of the Bergmeister (let’s call it that for convenience) clearly owes much to the Mercedes-Benz 300SL ‘Gullwing’ – it even emulates that icon’s trademark doors. The area usually occupied by the AMG GT’s boot is full of batteries, so a shooting break tail treatment provides added storage space. Other neat touches include a ‘double-bubble’ roof and Art Deco-inspired interior. 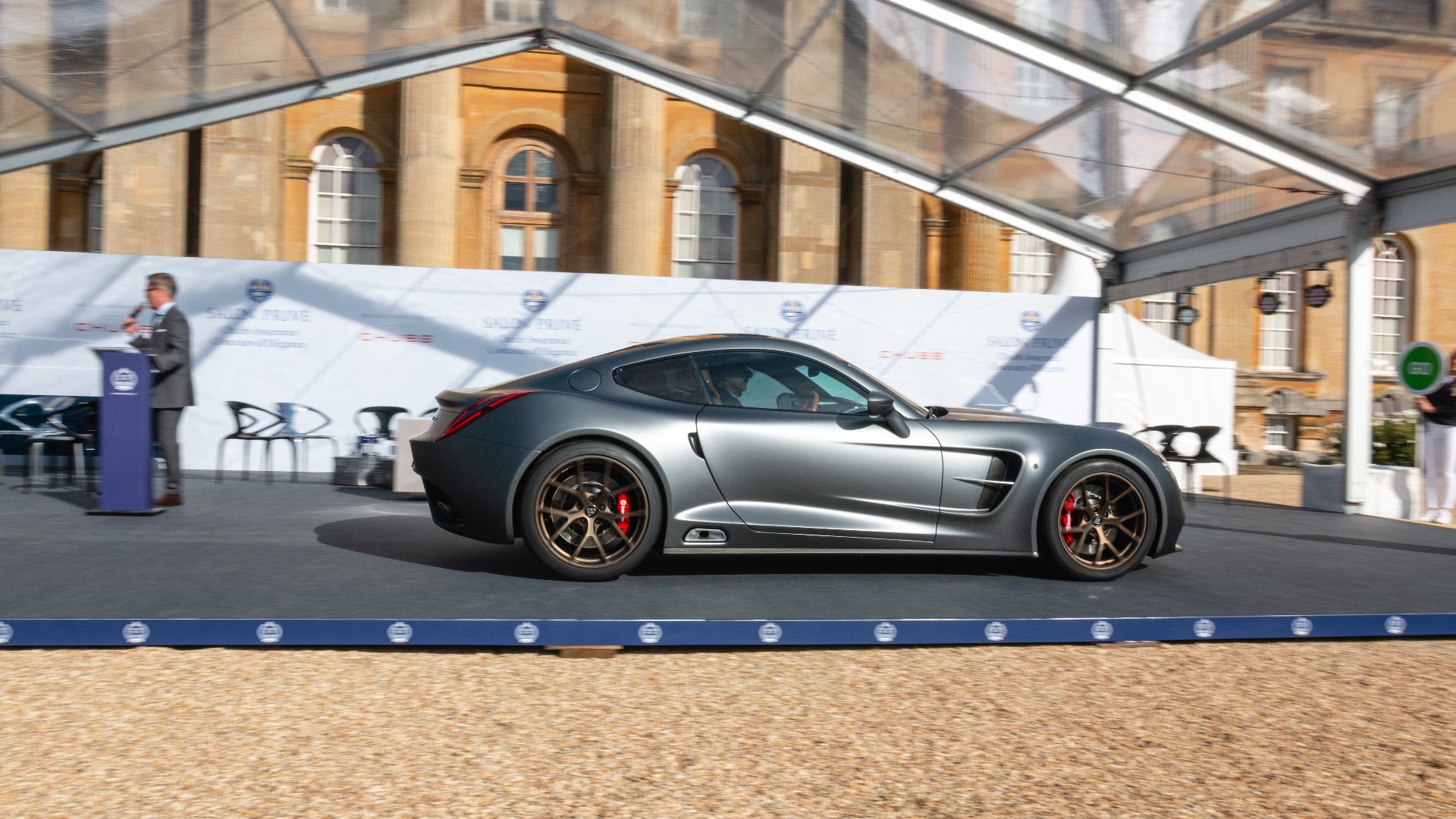 ‘Puritalia Automobili Berlinetta’ is another name that could prove challenging to say when sloshed. If we were being cruel, we might suggest the designer of this 965hp Italian sports car also imbibed one too many. But beauty is in the eye of the beer holder.

Hand-built near Naples, the Berlinetta has its roots in the 427 Roadster – a reborn AC Cobra. As such, most of its power (750hp, to be precise) comes from a good ol’ 5.0-litre supercharged V8, with the remaining 215hp via an electric motor driving the rear axle. In a 1,410kg carbon fibre coupe, that means 0-62mph in 2.7 seconds and 208mph. 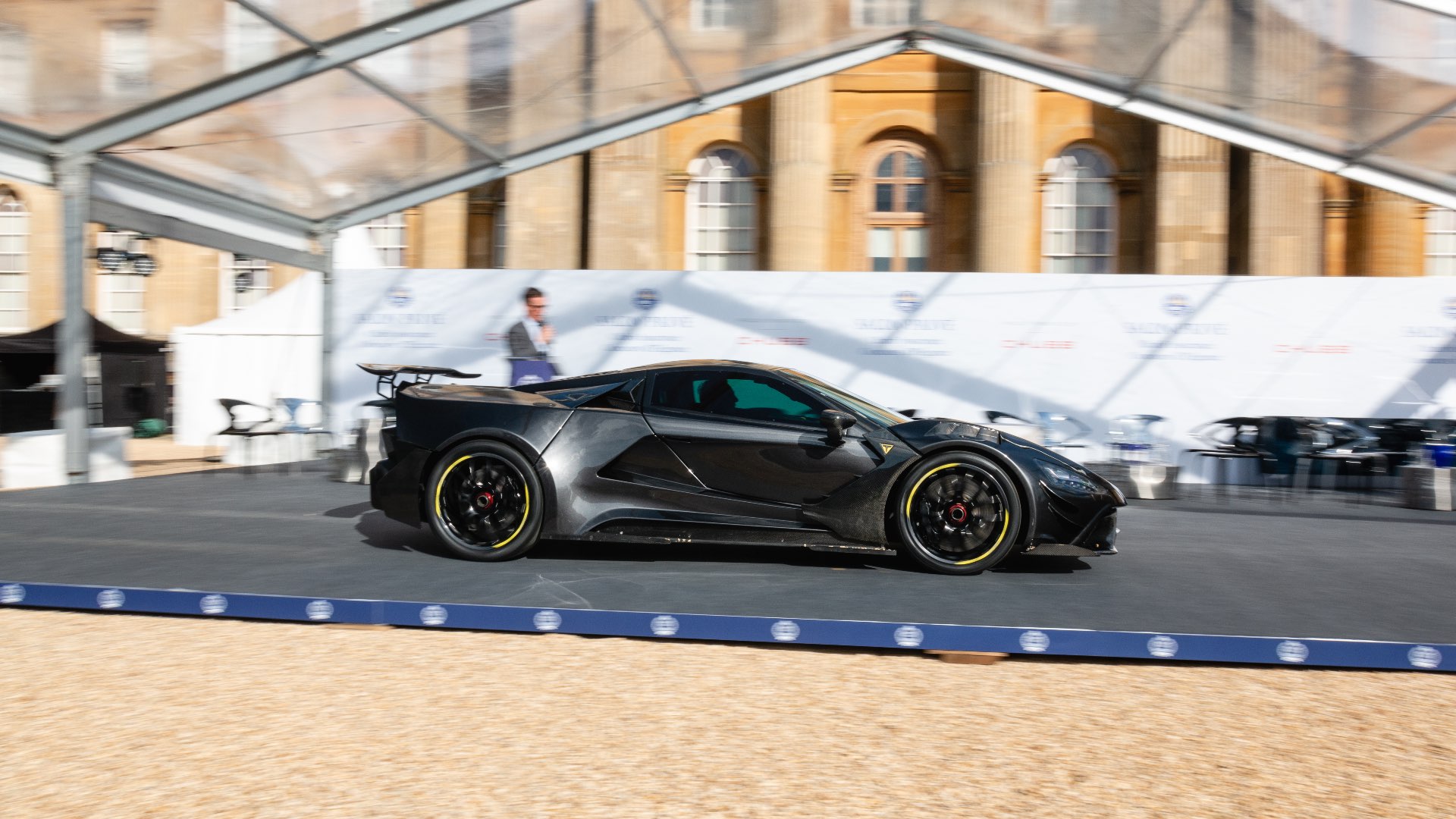 Slovenian racing driver Aljosa Tushek has launched his eponymous company in some style. The 1,410kg TS 900 H is billed as ‘the lightest hypercar on the road’ (don’t tell the McLaren Senna) and makes a combined 950hp from a petrol V8 and two electric motors. Performance? Yep, there’s plenty of that: 0-60mph in 2.5 seconds and a top speed of 236mph.

The wedgy bodywork is all carbon fibre, mounted on a chrome-moly spaceframe. Upwards-opening scissor doors add some visual theatre, while the removable roof means you can ‘experience the full exhilarating symphony of the thunderous V8’. In the genteel gardens of Blenheim Palace, it sounded utterly ferocious.

In a nod to its racing roots, the TS 900 H Apex wears super-sticky Pirelli Trofeo R tyres. Can we expect a establishment-baiting Nurburgring lap-time, perhaps even with Aljosa behind the wheel? Watch this space. 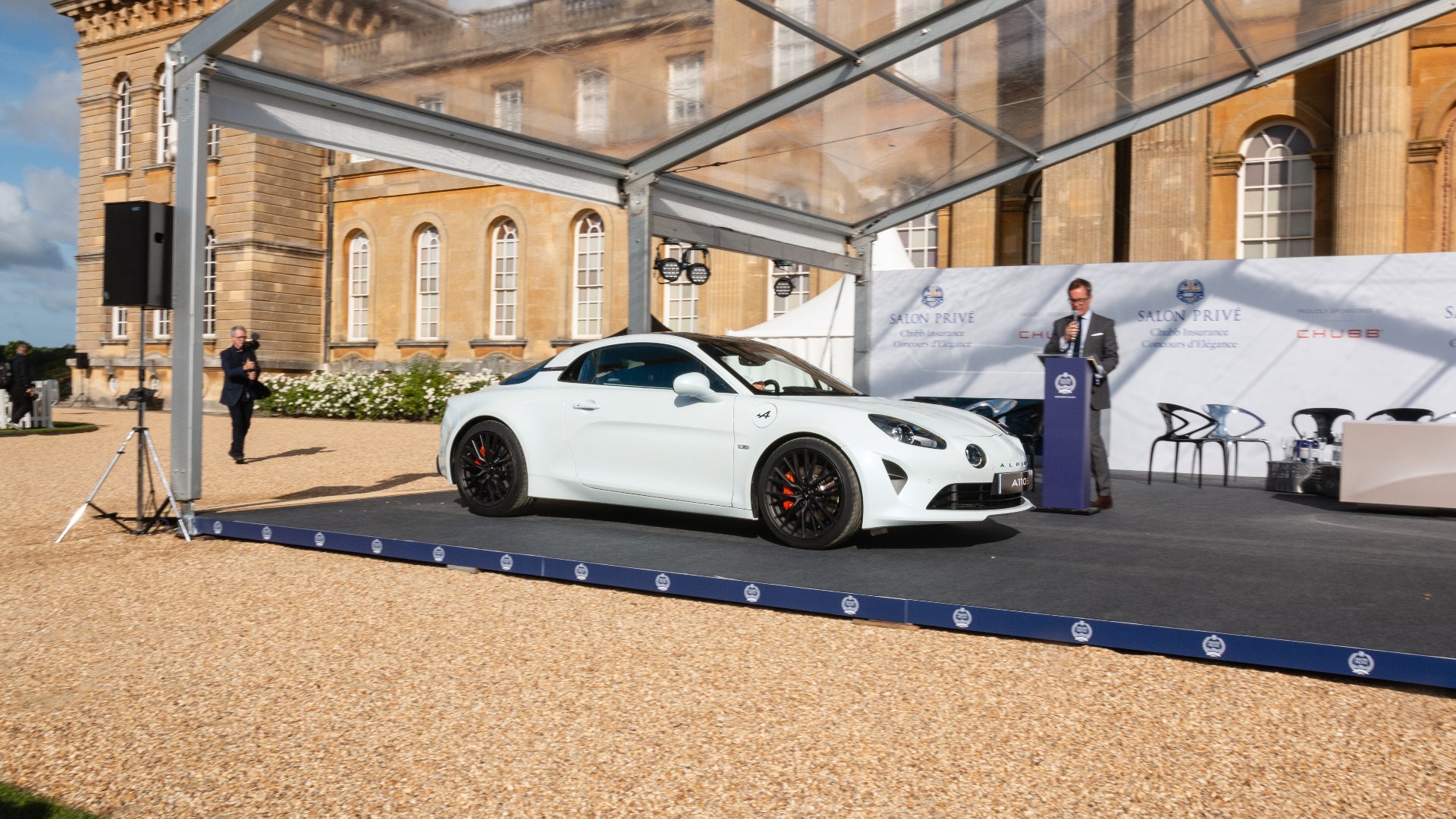 The Alpine A110 was pretty much perfect from launch: an immaculate conception that marked a triumphant return for a largely forgotten brand. Now Alpine has launched the faster, stiffer and all-round sportier A110S. Has it gilded the lily?

Thankfully, the changes are subtle. The 1.8-litre turbo four has been tweaked to produce 292hp – an increase of 40hp over the standard car – while a switchable sports exhaust delivers a ‘more emotive engine sound’. Brakes, tyres and suspension have also been upgraded, with beefier Brembo calipers, wider Michelin Pilot Sport 4 rubber and a 4mm drop in ride height, plus stiffer anti-roll bars. 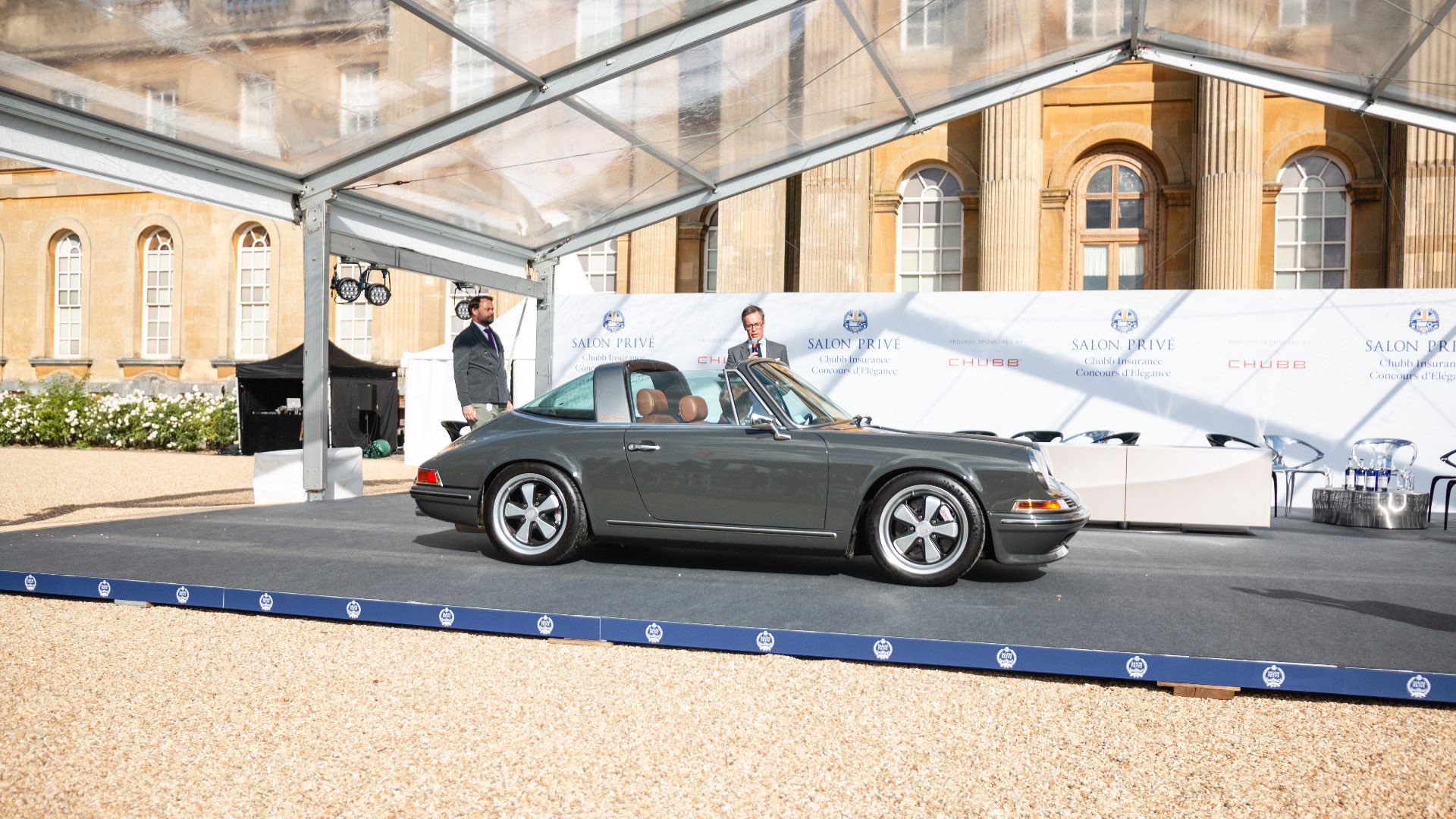 The ‘backdated’ Porsche 911 – with classic looks and more modern mechanicals – is nothing new. However, the rise of Singer has supercharged this market so that no ropey old SC or 964 is safe from a ‘restomod’ makeover. Now French company Crubilé Sport, which has decades of experience restoring 911s, wants a piece of the action.

The Ateliers Diva Targa is based on the 964-model 911, built between 1989 and 1994. Buyers can choose from a Carrera 2 or 4 drivetrain (the latter with four-wheel drive) and Coupe, Targa or Safari body styles – the Safari with raised suspension and rally accessories. Crubilé Sport will build 75 cars in total.

As ever, the heart of this 911 is behind the back axle: a race-derived 4.2-litre engine said to offer ‘the reliability of a modern 991’. No performance figures have been quoted yet, but with a kerb weight around 1,100kg, safe to assume it’s pretty swift. We want one. 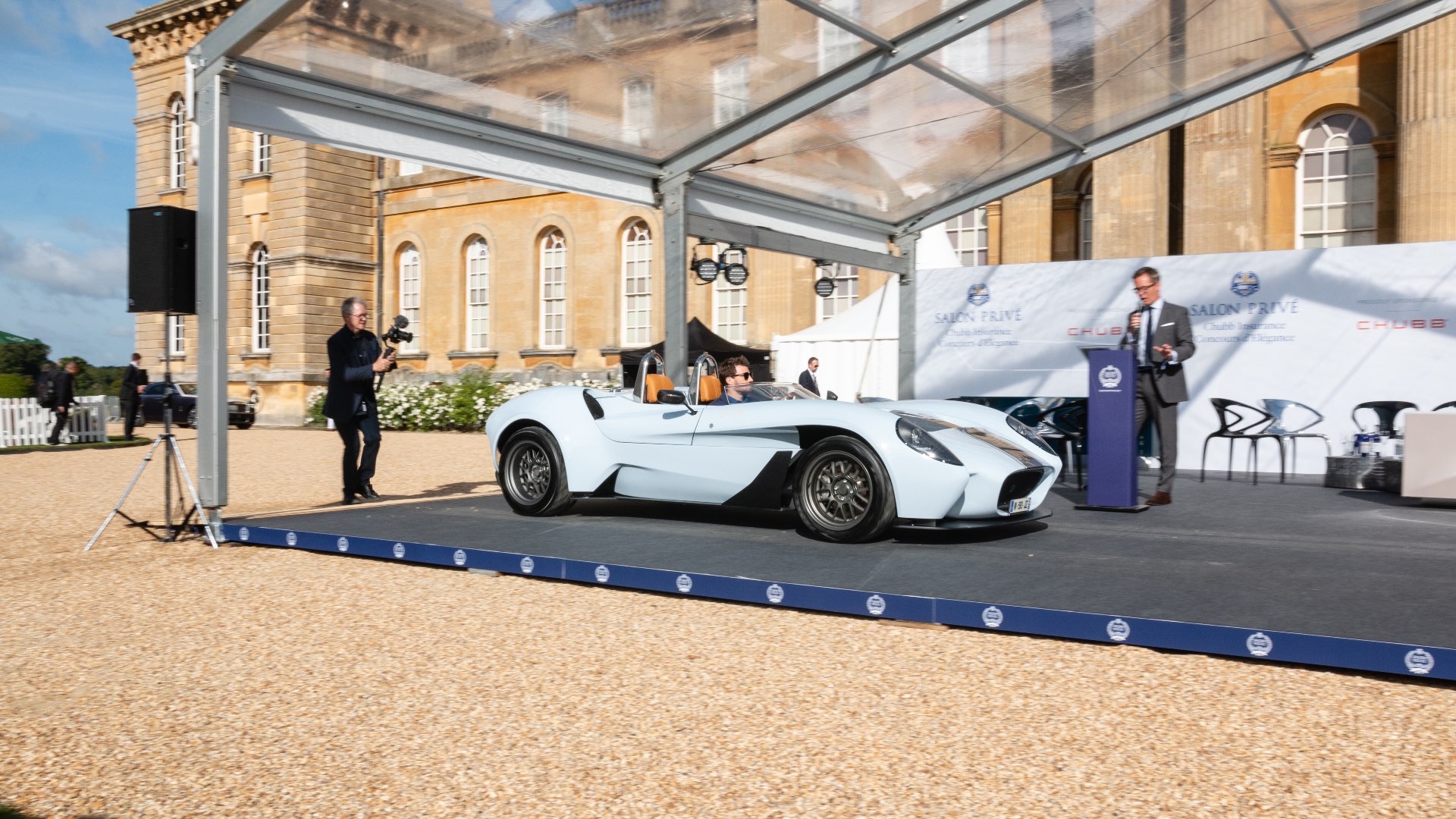 Designer Anthony Jannarelly first grabbed the attention of petrolheads with the W Motors Lykan HyperSport, a money-no-object hypercar built in the Middle East. Now he’s put own name on a retro-styled, rear-wheel-drive roadster.

The Design-1 was originally a one-off for Anthony’s personal use. However, “such was the enthusiasm”, he explains, “we decided to go the whole way and launch our own sports car brand. And so Jannarelly was born”. Based on a steel and aluminium tubular frame, the Design-1 weighs just 810kg with composite bodywork, or 760kg in all-carbon. Power comes from a 330hp 3.5-litre Nissan V6, serving up 0-62mph in ‘less than four seconds’.

David Bagley, co-founder of Salon Privé said “I’m thrilled that Anthony and Thomas Ceccaldi, director of Jannarelly Paris, have selected our event to launch the thrilling Design-1 to the UK market. By and large, the guests who attend Salon Privé are knowledgeable, well-heeled enthusiasts and I’m confident that they will welcome this fabulous new sports car brand when it is unveiled on the lawns of Blenheim Palace.” 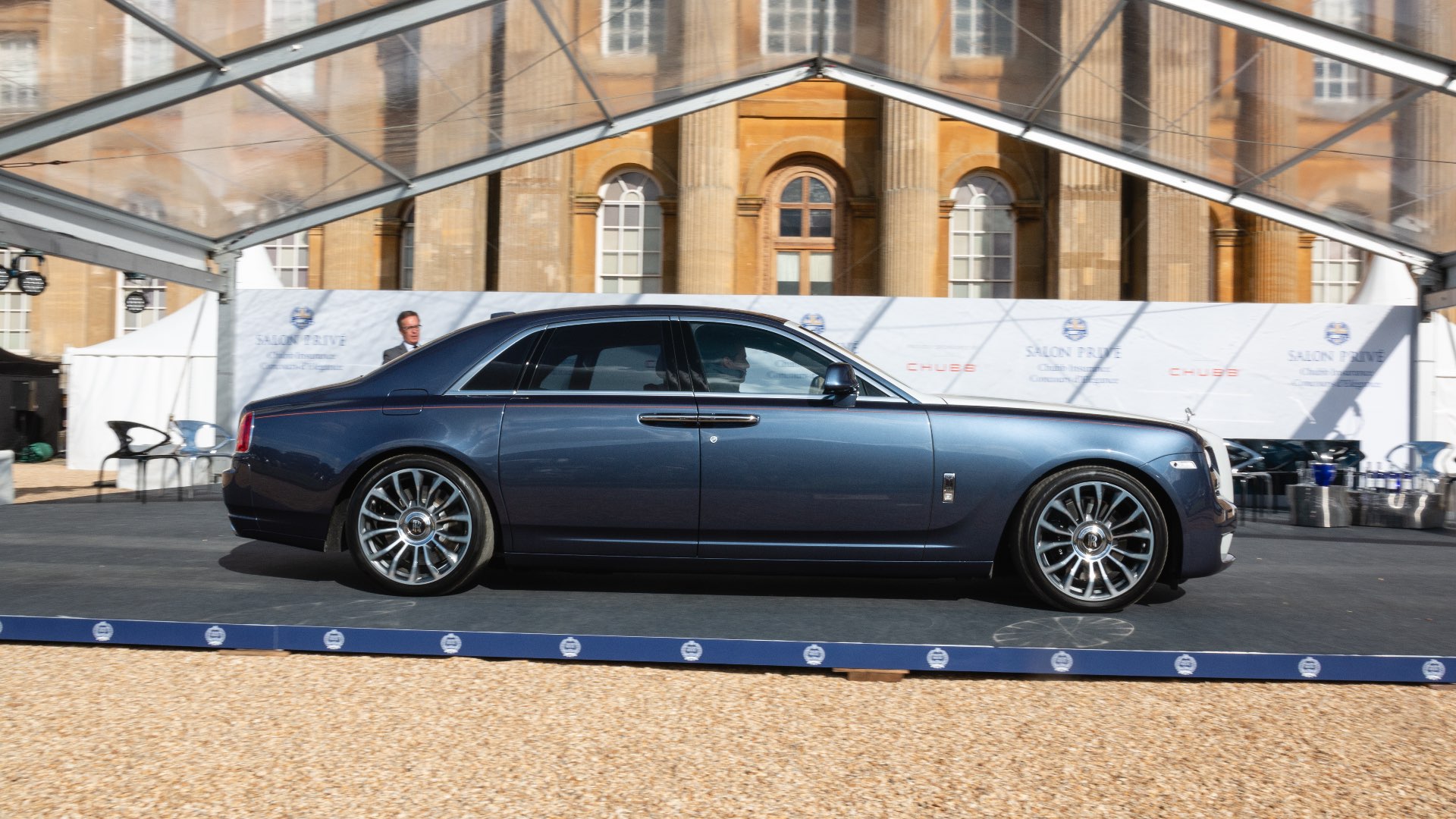 Not even Rolls-Royce is immune to knocking out special editions when a car reaches its twilight days. The 10–year-old Ghost is due for replacement soon and 50 Zenith editions will mark its passing. Each car has a commemorative ingot inlaid into the dashboard, which is made from the melted-down Spirit of Ecstasy of the original ‘200EX’ Ghost prototype.

The 200EX is also remembered by an engraving on the centre console. This blueprint-inspired artwork has been divided into 50 parts, ‘allowing each Ghost Zenith customer their own personal and individual work of art, while at the same time uniting the collection as a group homage to Ghost’. So now you know. 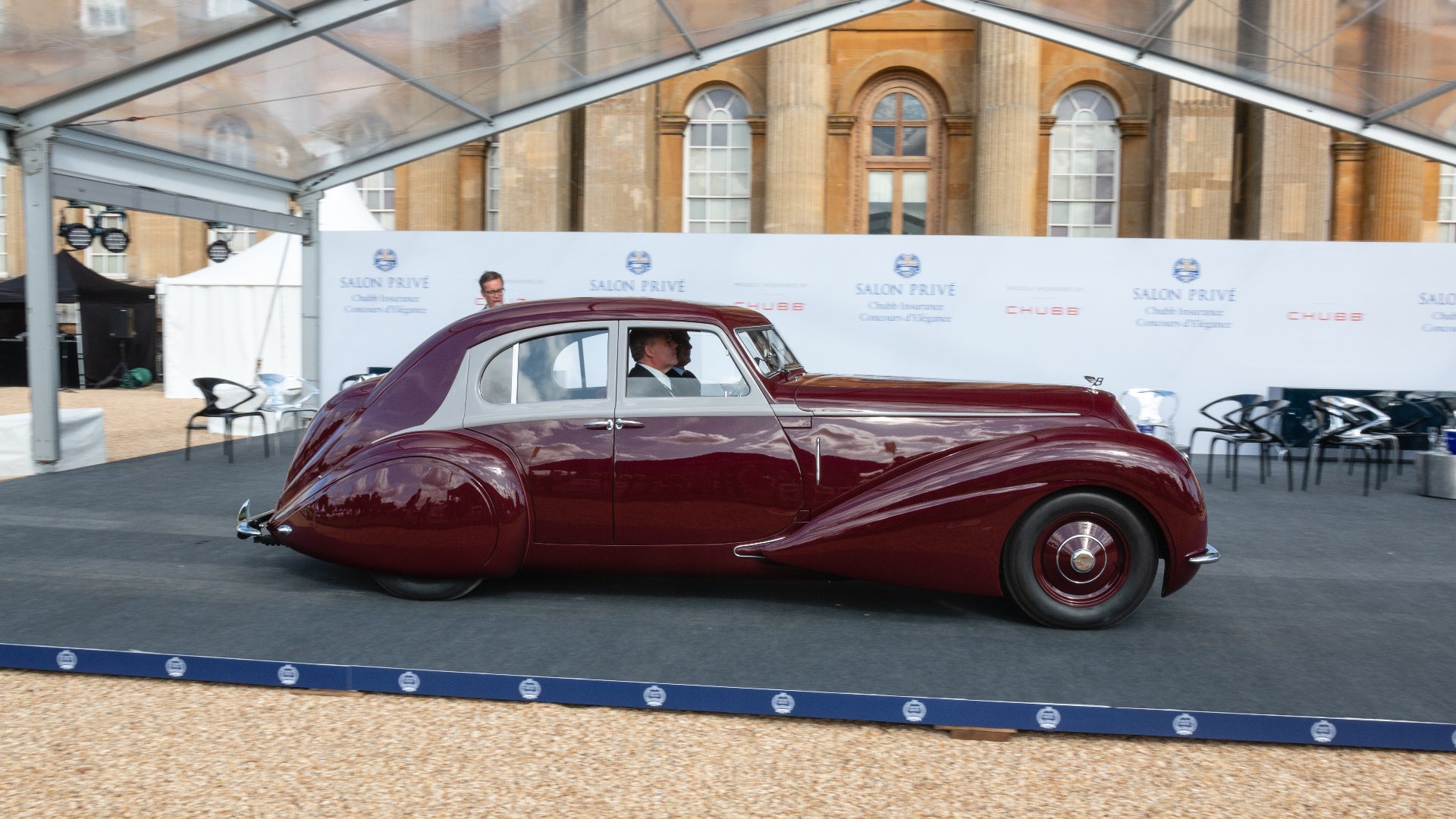 The original Bentley Corniche was commissioned by Greek racer Andre Embiricos and styled by Georges Paulin. Thanks to its streamlined body, it topped 100mph on the banked Brooklands circuit. Sadly, the Corniche was damaged by a bus while road testing in France in July 1939. The subsequent outbreak of World War Two then saw it damaged by a Luftwaffe bombing raid, never to be seen again.

Now, Bentley’s bespoke Mulliner division has re-created the long-lost Corniche, which makes its public debut at Salon Privé. The car has been a true labour of love, aided by volunteers who gathered information and sourced parts to assemble the chassis. Using original technical drawings combined with modern CAD techniques, the end result is simply stunning. Mulliner carpenter Gary Bedson even devised a custom steam booth to bend sections of wood for the window surrounds.

The original was destroyed by a Luftwaffe bombing raid in 1939. This version has been recreated in-house by Mulliner using original blueprints and parts. pic.twitter.com/qVsTu8jOmy

“It’s been a fantastic team effort,” said Stefan Sielaff, design director at Bentley. “We have skilled craftsmen within Mulliner and around the rest of Bentley Motors and they all have massive pride in what they’ve achieved with this car.” 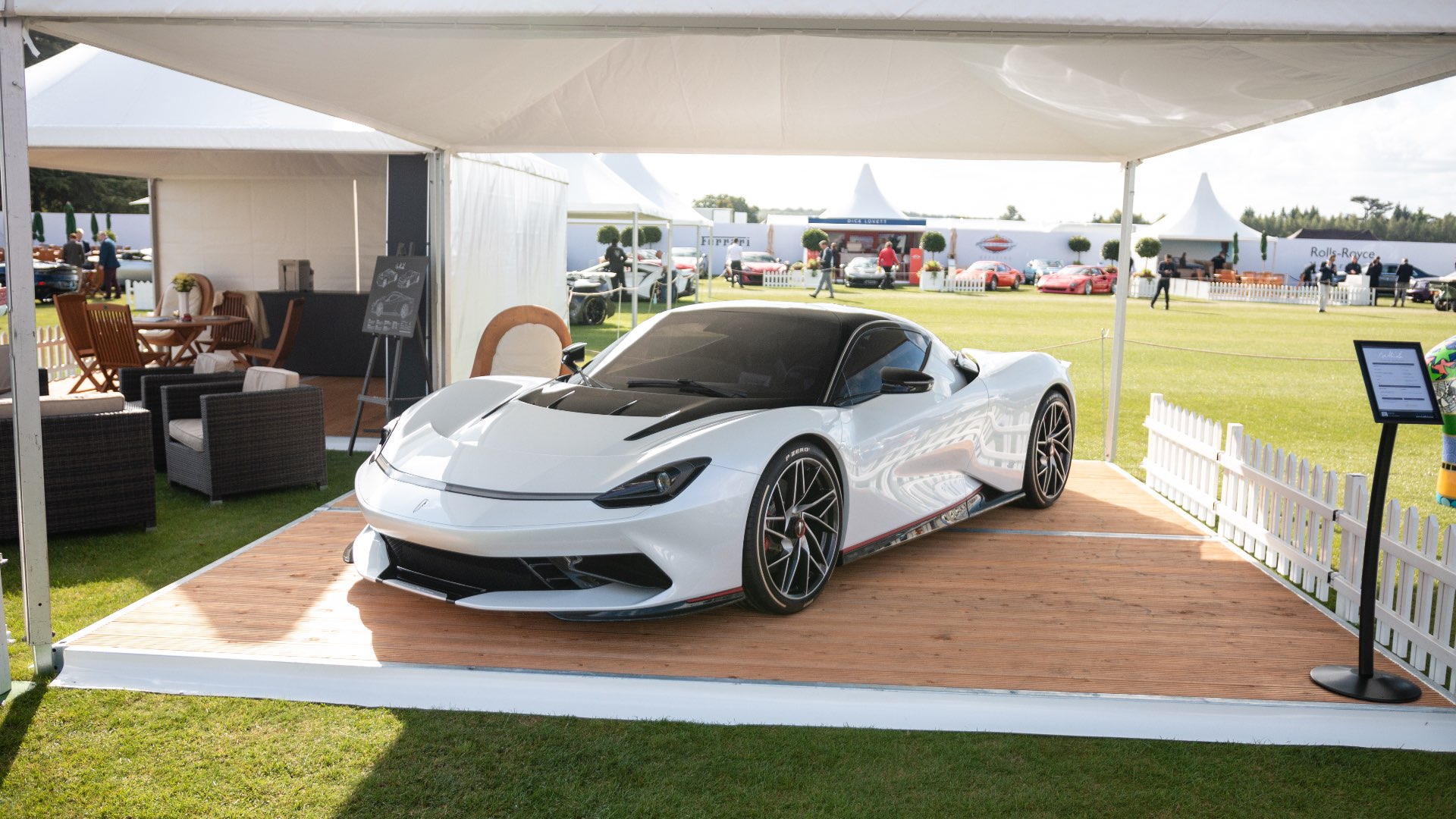 Pity the poor Pininfarina Battista. With a faintly ludicrous 1,900hp, it was (briefly) the most powerful production car ever until the Lotus Evija came along. Still, buyers who stump up the requisite £2 million aren’t likely to complain about 0-62mph in ‘less than two seconds’.

All that oomph comes from four electric motors – one for each wheel – providing a combined 1,696lb ft of torque. Handling has been honed by ex-F1 driver Nick Heidfeld, along with chassis guru Peter Tutzer (formerly of Bugatti, Pagani and Porsche).

Fittingly for the company that penned many of Ferrari’s finest, the carbon-bodied Battista is also utterly gorgeous. Sleek, curvaceous and devoid of aggressive aero appendages, it’s every inch the 21st-century hypercar. Just 150 will be built, after which Indian-owned Pininfarina Automobili plans to make an SUV. 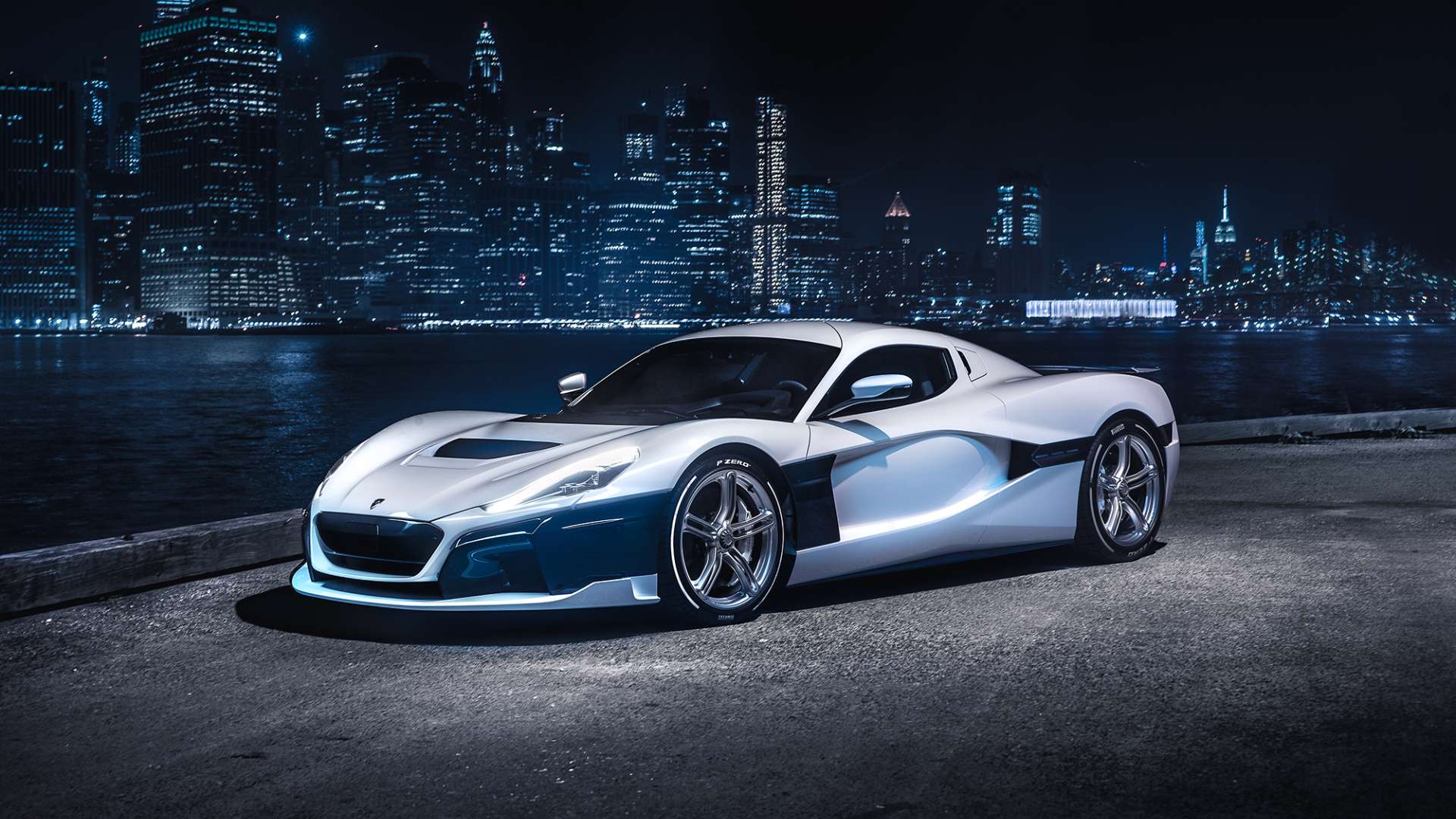 The Rimac C_Two was delayed en route to Salon Privé, hence the library pics here. To our knowledge, it’s the only car besides the first-generation Kia Pro_Cee’d to feature an underscore in its name. The Croatian electric supercar also promises the small matter of 1,913hp (yep, even more than the Battista) for 0-60mph in 1.85 seconds, 0-186mph in 11.8 seconds and a top speed of 258mph. Yowzers.

The £2.3 million Rimac also uses facial recognition rather than a key to unlock and start (don’t grow a beard or you’re going nowhere), plus it should deliver more than 400 miles range on a full charge.

Hands-down our favourite feature, though, is inside the cabin. After Top Gear presenter Richard Hammond famously crashed and burned its Concept One predecessor on camera, the C-Two has the words ‘In case of hill climb, extinguish fire’ inscribed on the leather strap that secures its fire extinguisher. 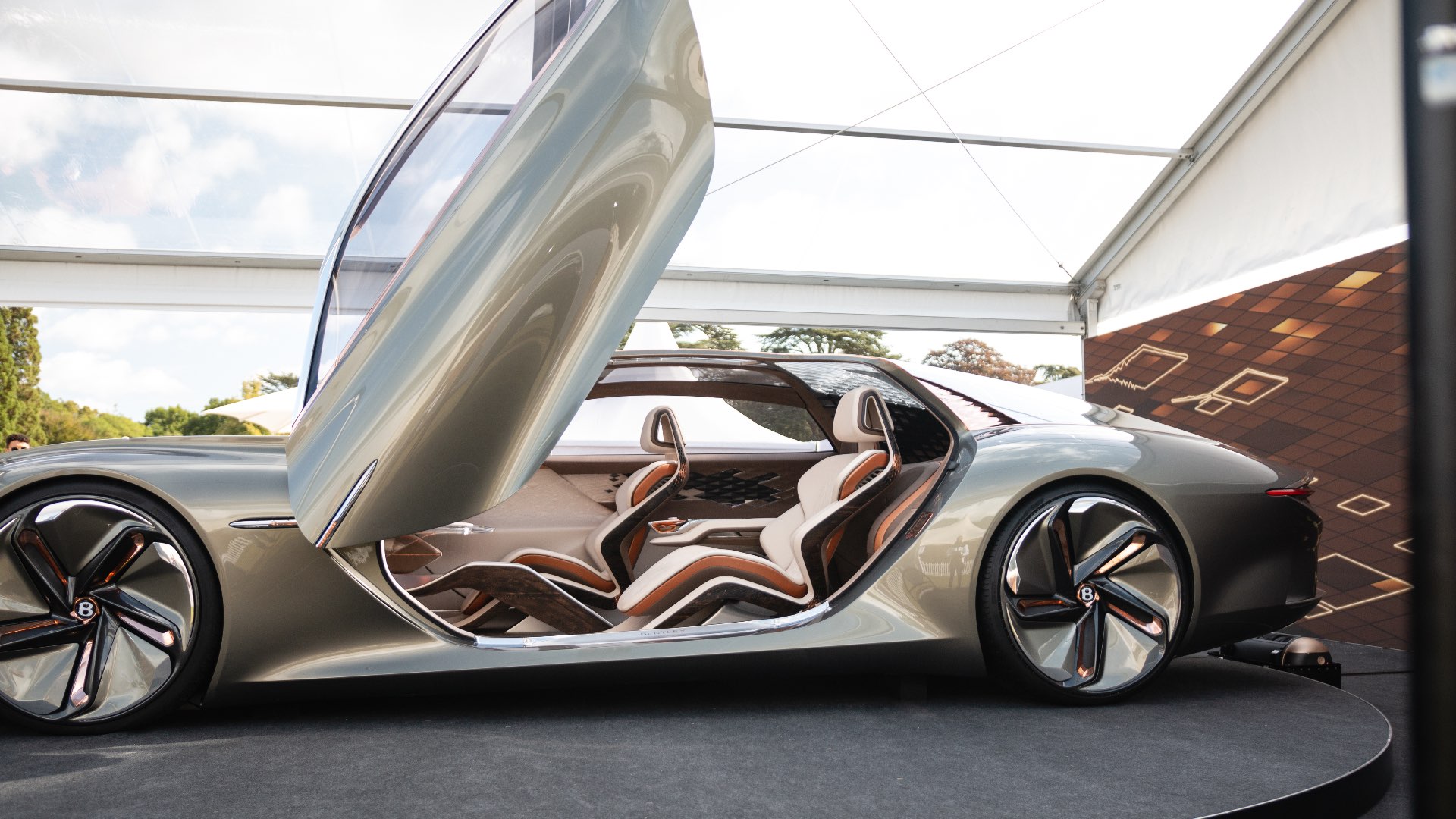 Finally, back to Bentley. The EXP 100 GT is a celebration of the first 100 years of the British marque. It ‘reimagines the Grand Tourer for the world of 2035… a world of shared luxury experiences where passenger and driver enjoy equal status in their enjoyment of their extraordinary journeys’. In part, that means this concept EV can virtually drive itself.

A total of four electric motors produce 1,106lb ft of torque, enough to propel the 1,900kg EXP 100 GT to 60mph in 2.5 seconds and 186mph flat-out. The design, which looks stunning in the metal, hints at legendary Bentleys of old: spot the R-Type Continental rear haunches and headlights that evoke the iconic Blower. The illuminated matrix grille, however, is fearlessly futuristic.

A quoted range of 435 miles is perhaps less impressive than the batteries’ ability to be recharged to 80 percent capacity in just 15 minutes. Inside, a ‘Bentley Personal Assistant’ analyses your eye movements and blood pressure, tailoring the car’s systems to suit. A unique ‘Enhance’ mode also adapts light, sound, smell and air quality to deliver a ‘feeling of open top motoring from under the glass canopy’. Only 16 more years to wait…