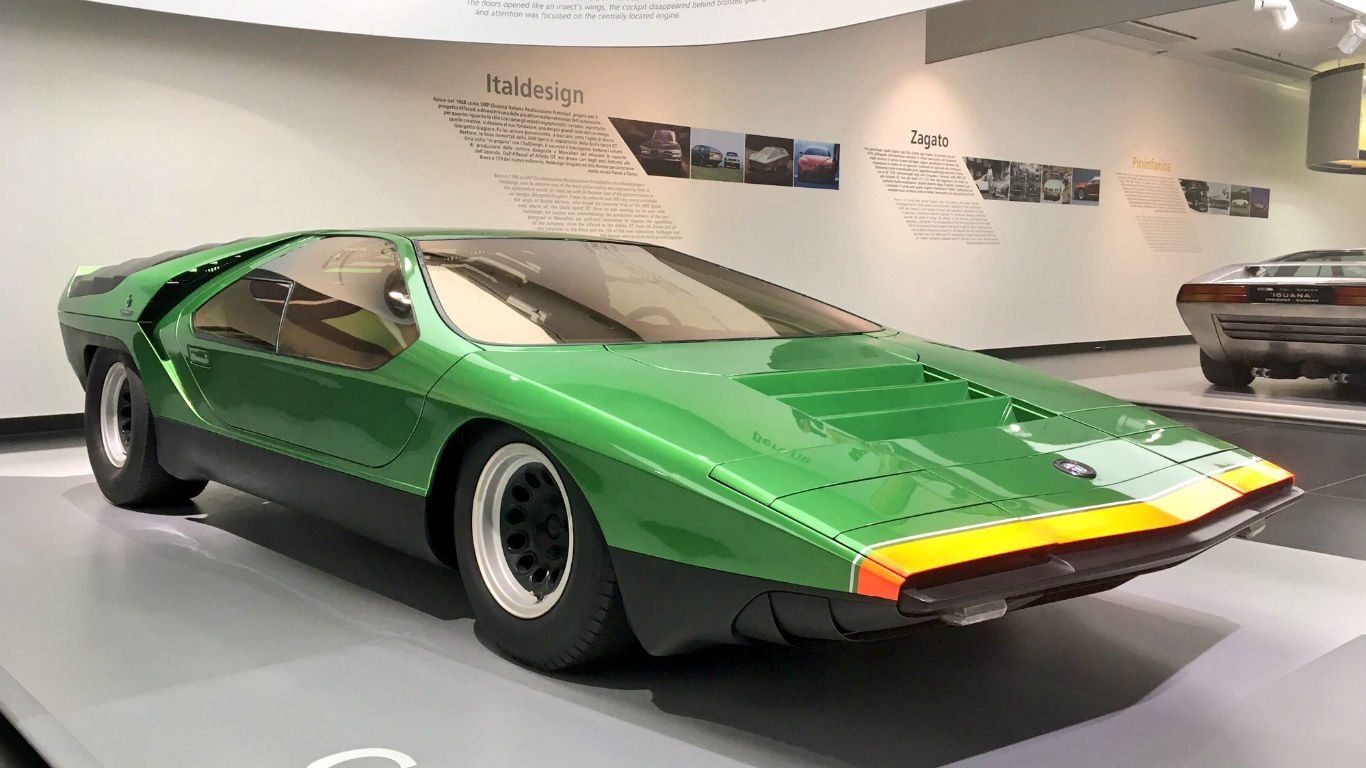 Lorenzo Ardizio, curator of the Museo Storico, describes this outwardly brutalist building near Milan as a ‘temple to Alfa Romeo’. Inside, around 70 road, race and concept cars chart the company’s illustrious history, from its birth as A.L.F.A. (Societa Anonima Lombarda Fabbrica Automobili) in 1910 to the new Giulia Quadrifoglio.

Here are some of the highlights. 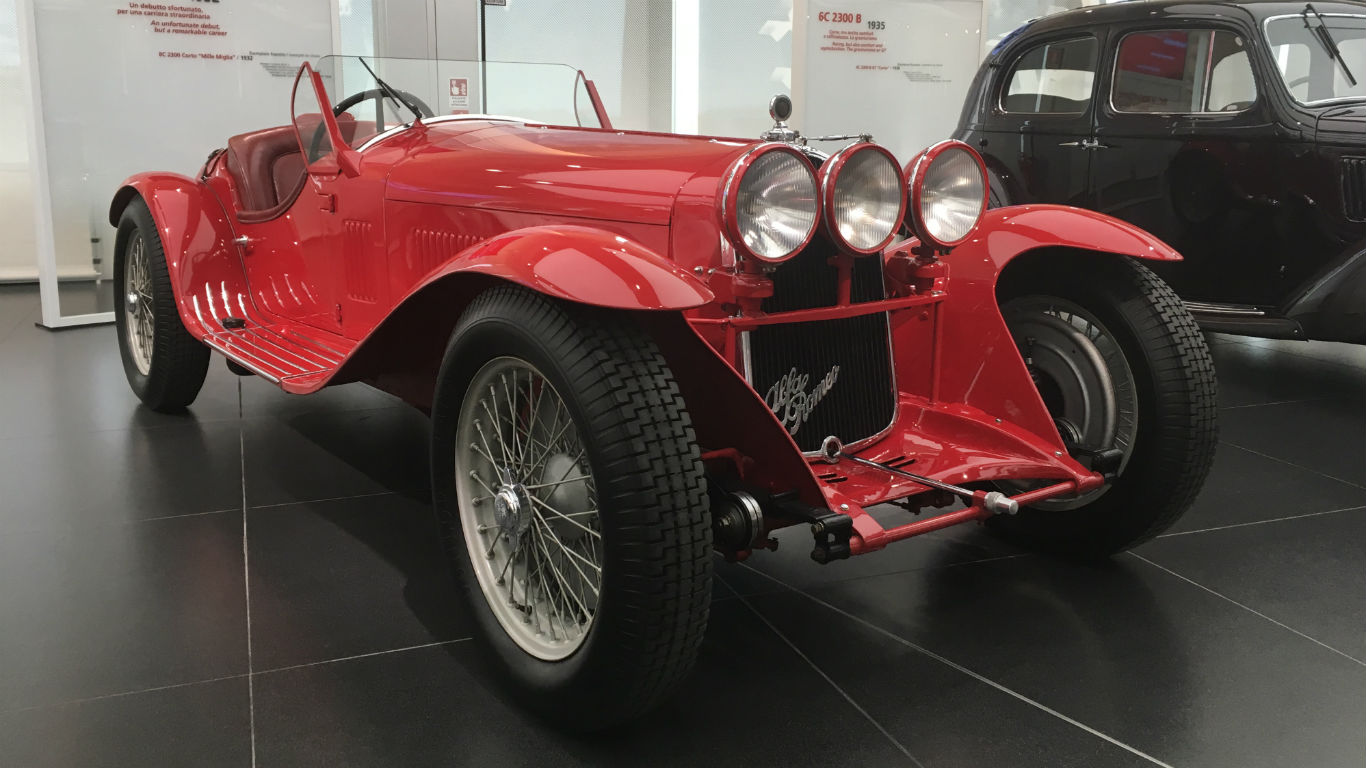 Let’s start with one of the Alfa’s most evocative sports cars: the 8C 2300. Its long, louvred nose hides a 155hp supercharged straight-eight displacing 2,236cc (not quite the 2.3 litres its name suggests). Racing ‘Mille Miglia’ versions were campaigned by Alfa Romeo and the fledgling Scuderia Ferrari, taking victory in the eponymous event in 1932 and 1933. 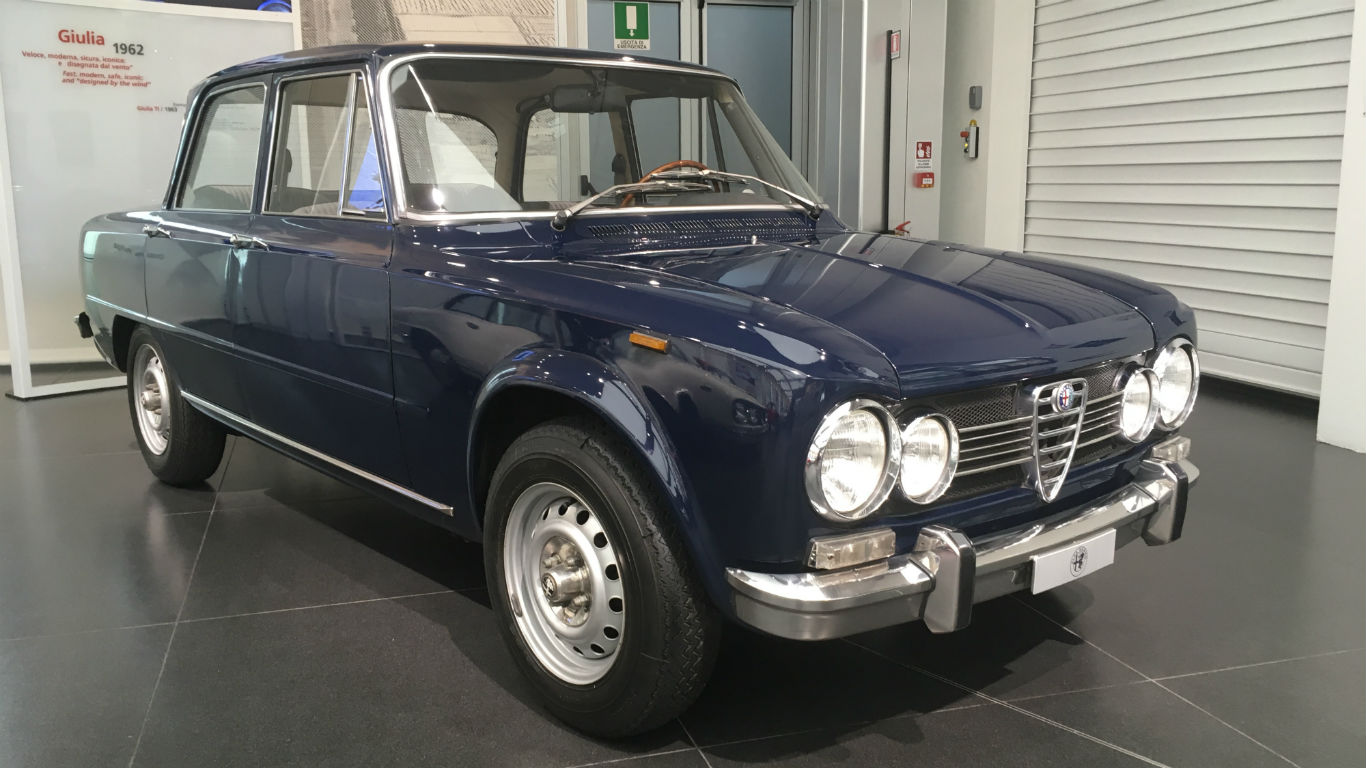 Fan of the new Alfa Giulia? Well, here’s where it all began. You wouldn’t think it, but the boxy original Giulia was actually designed using a wind tunnel, which helped shape its tapered front end and truncated tail. Powered by a twin-cam 1.6-litre engine, the Giulia was a huge success – with nearly 600,000 built between 1962 and 1978. It was also a firm favourite with the Carabinieri (Italian police). 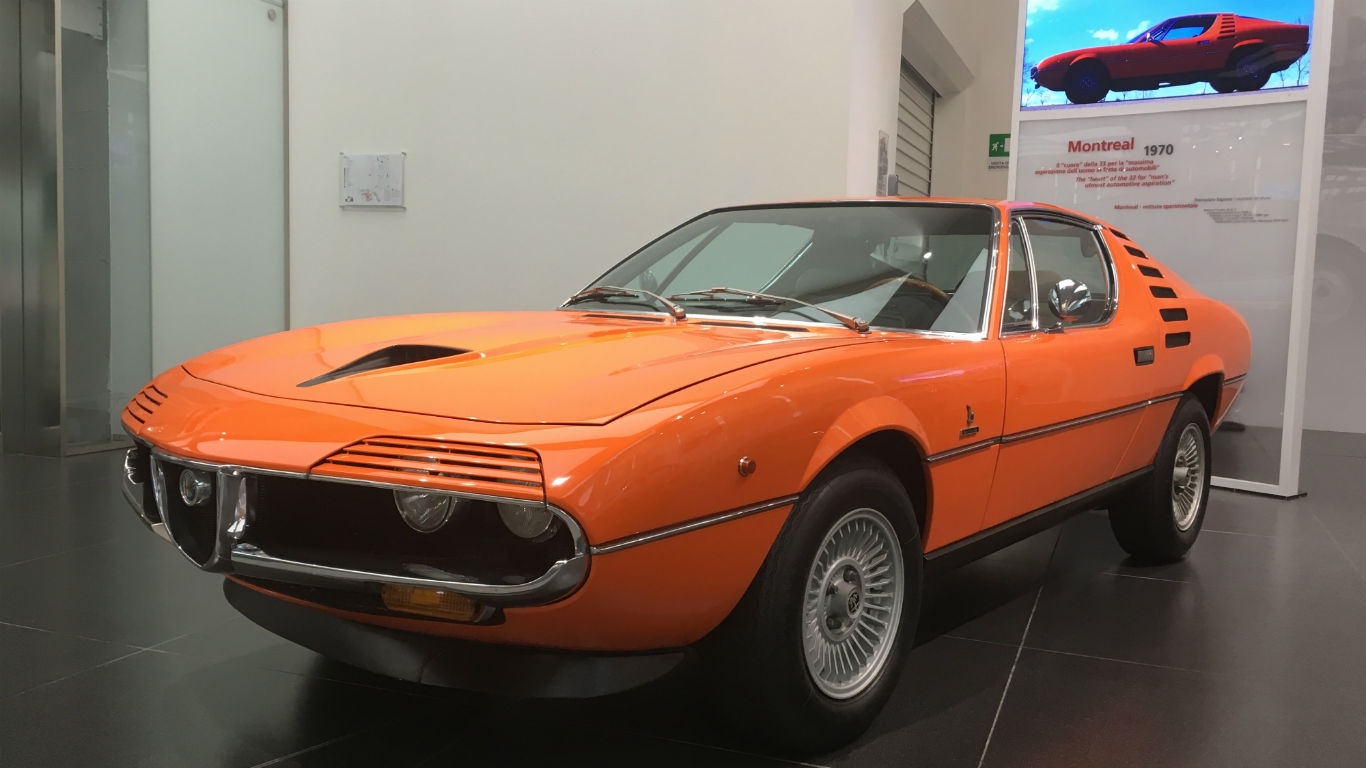 This much-loved Alfa started life as a concept car intended to embody ‘man’s utmost automotive aspiration’ at Expo 1967 in Montreal. However, the Marcello Gandini-styled coupe proved so popular that it entered production in 1970. Behind its retractable eyelashes, the Montreal has a 200hp 2.6-litre V8 – good for a top speed of 137mph. 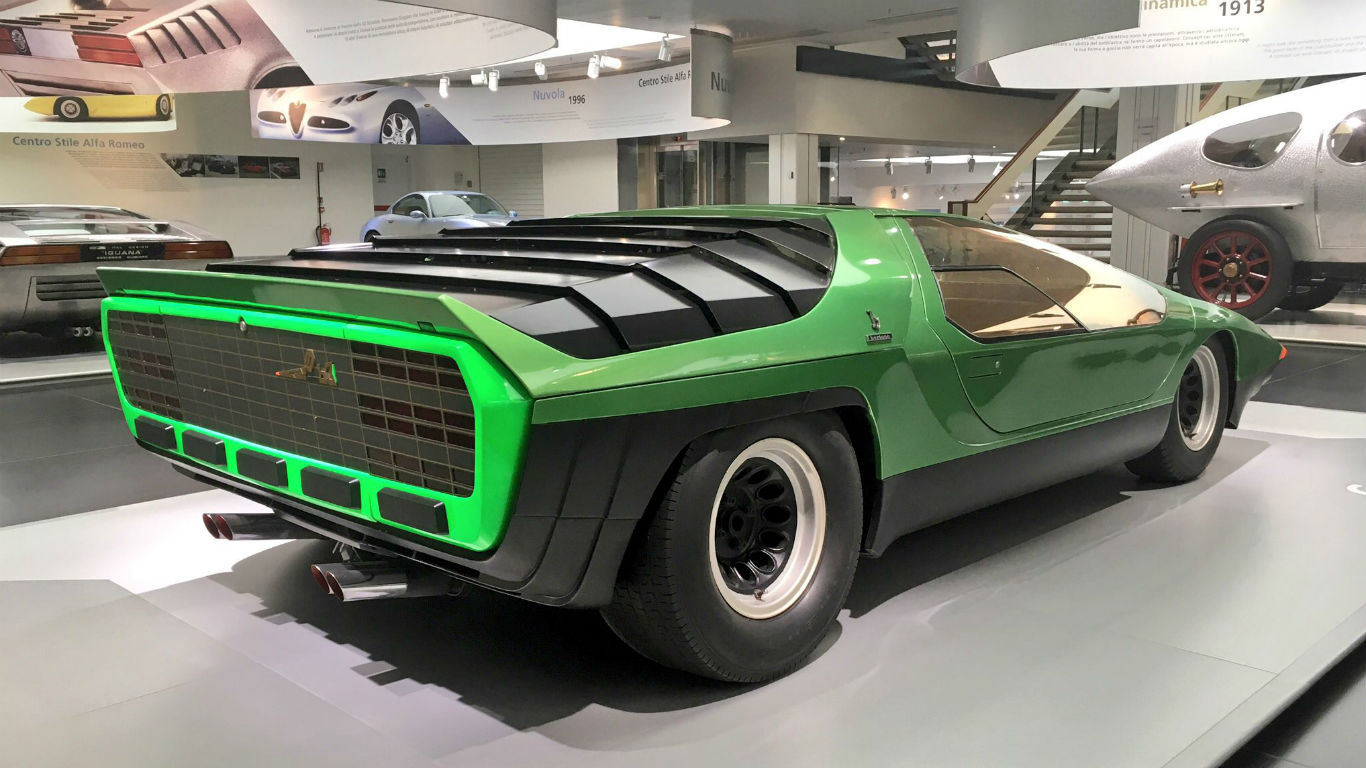 Here’s a concept that – much to our dismay – never made production. Styled by Gandini during his time at Bertone (spot his trademark asymmetric rear wheelarches), the 1968 Carabo remains the embodiment of the futuristic supercar. Its wedgy profile and vertically-opening doors were also a direct influence on the Lamborghini Countach. 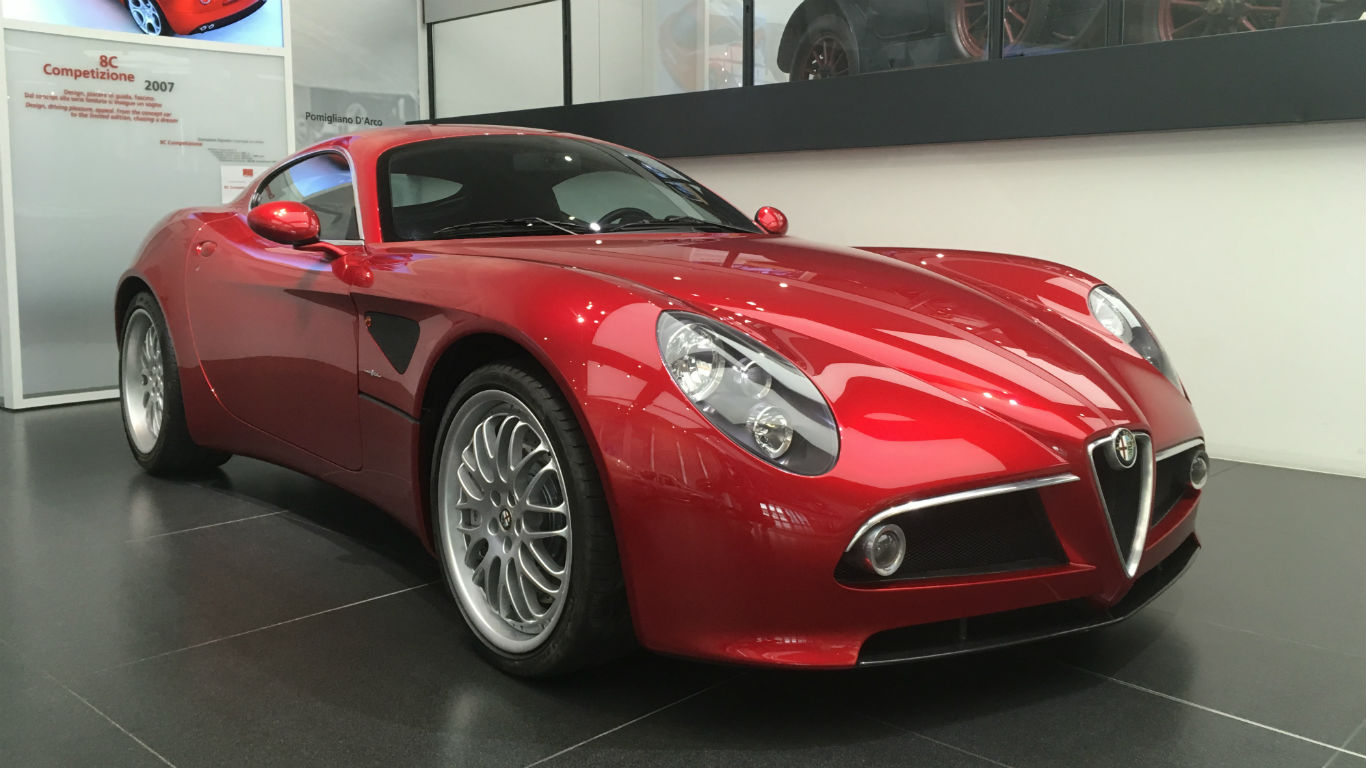 Now for Alfa’s very own supercar – one that would take on Ferrari and Lamborghini at their own game. With a name that evoked those 1930s racers, plus the small matter of a 450hp Maserati V8, the 8C could hit 62mph in 4.2 seconds. Just 500 examples of this carbonfibre-bodied flagship were made, one of which is displayed in the ‘Timeline’ hall at the Museo Storico. 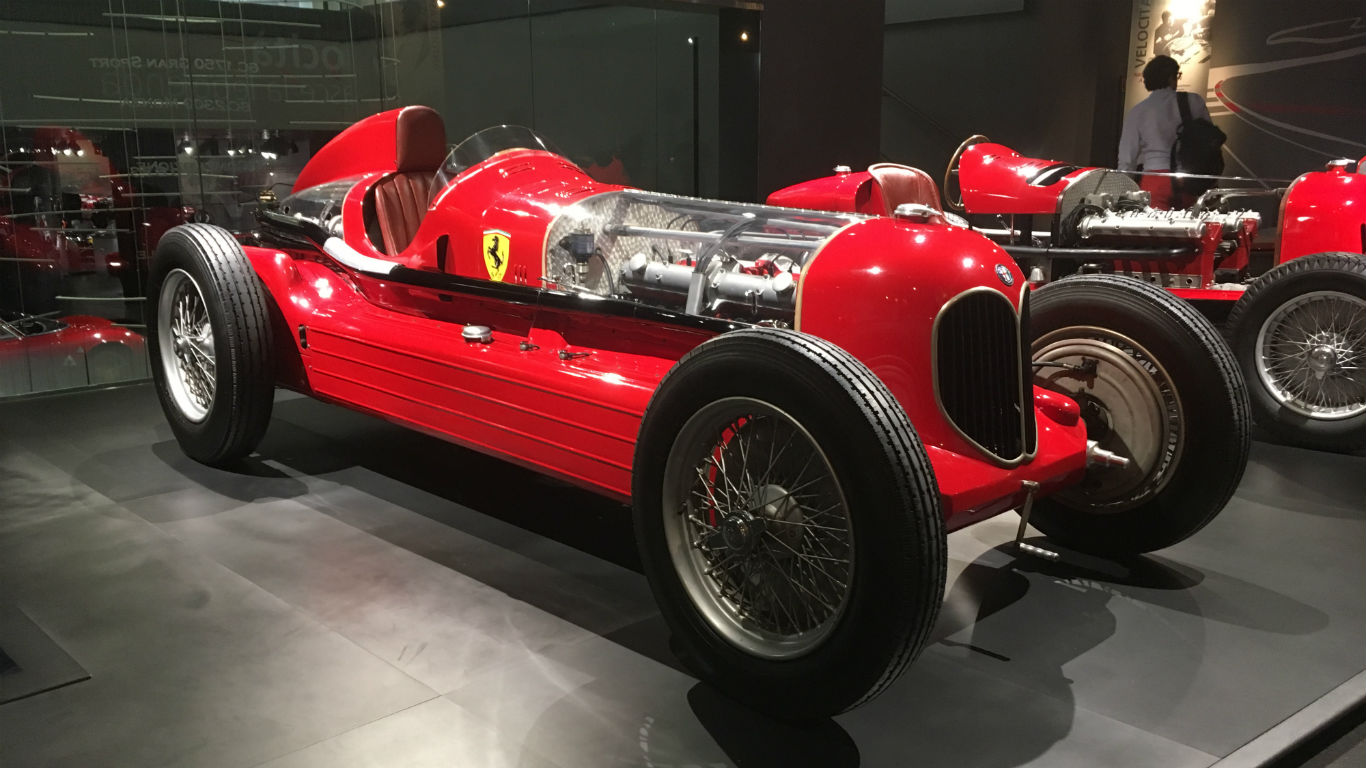 What’s better than one 270hp straight-eight? Why, two of course. The bonkers Bimotore had one engine in front of the cockpit and another over the rear wheels. Despite its prodigious power, though, the 1935 Bimotore wasn’t a great success. Even Alfa Romeo’s official history describes it as ‘cantankerous and difficult to tame’. Only two were made, but it stands in testament to pre-war Alfa’s engineering prowess. 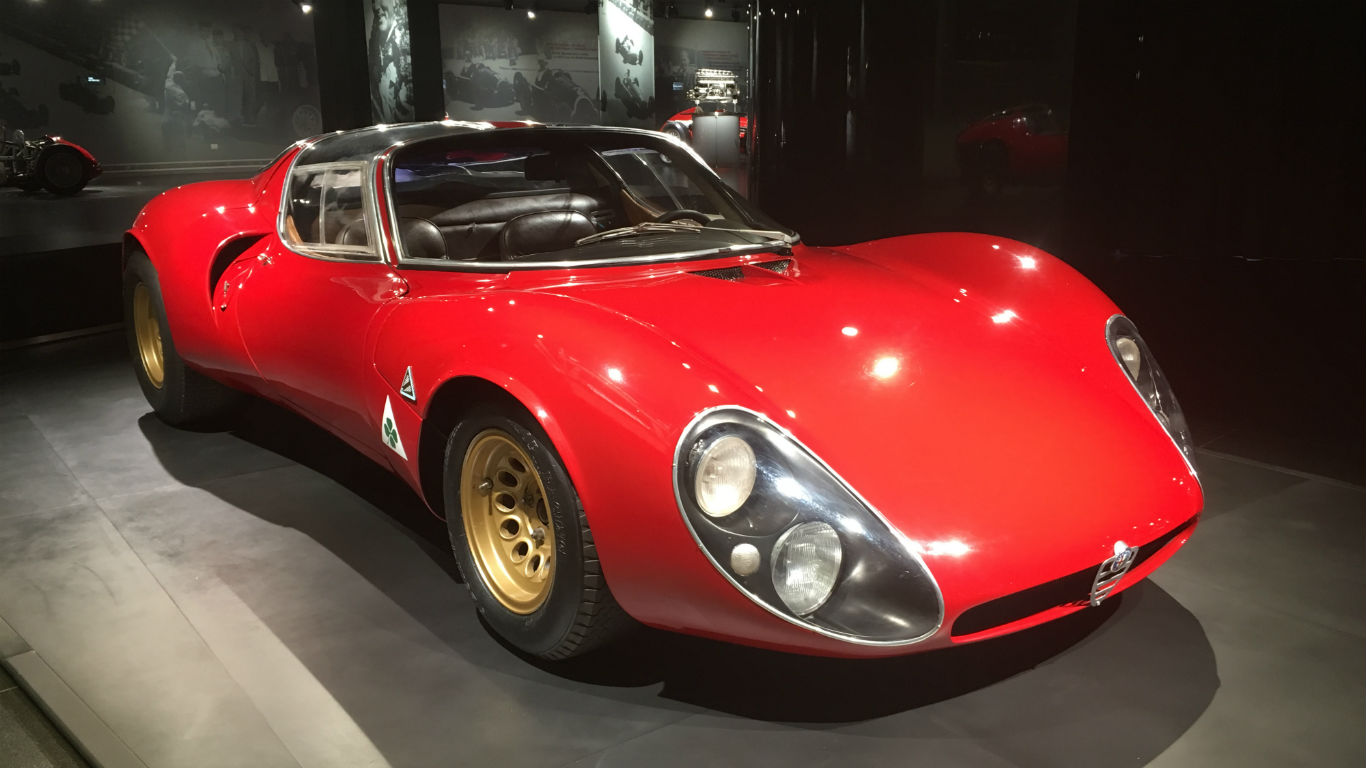 The 1967 33 Stradale is such an iconic design that, much like the Ford GT40 or Lancia Stratos, it has subsequently been ‘reimagined’ with modern mechanicals. And why not? For our money, this voluptuous road-legal racer is one of the best looking cars ever. It’s also one of the most valuable: with only 18 made, any Stradale commands a seven-figure price tag. 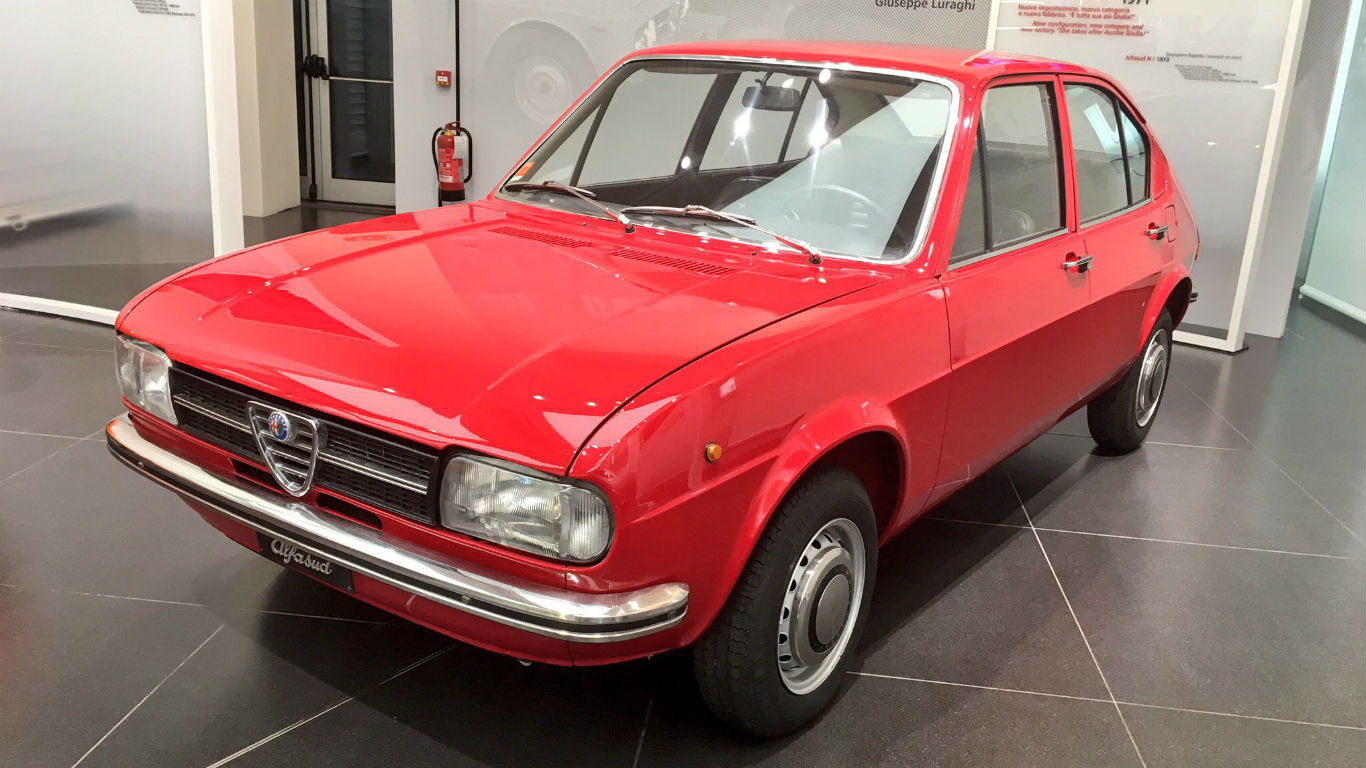 Alfasud translates as ‘Alfa South’, reflecting the fact that the factory was in the south of Italy – part of a state-sponsored effort to bring work to the region. And the ‘Sud’ was indeed a car for the people, with a spacious interior and a peppy 63hp 1.2-litre engine. Sadly, nearly all of the 900,000 built have now rusted into oblivion. 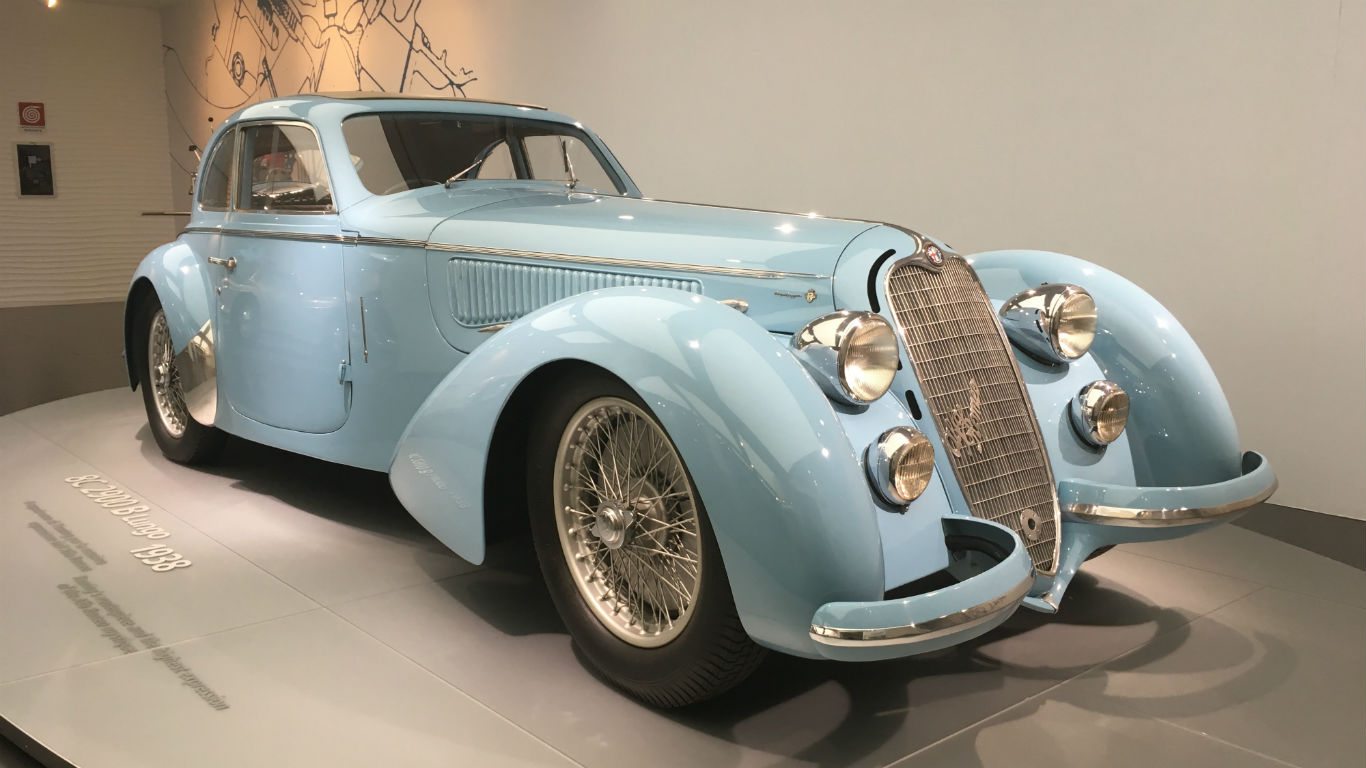 We make no apologies for including a second 8C here. The beautiful 1938 8C 2900 Lungo is described in the Museo Storico guidebook as no less than ‘Touring’s masterpiece and the ultimate Alfa Romeo’. Well, that’s settled then. Only 10 examples of the long-bodied Lungo were built, all using the well-proven 220hp 2.9-litre straight-eight. 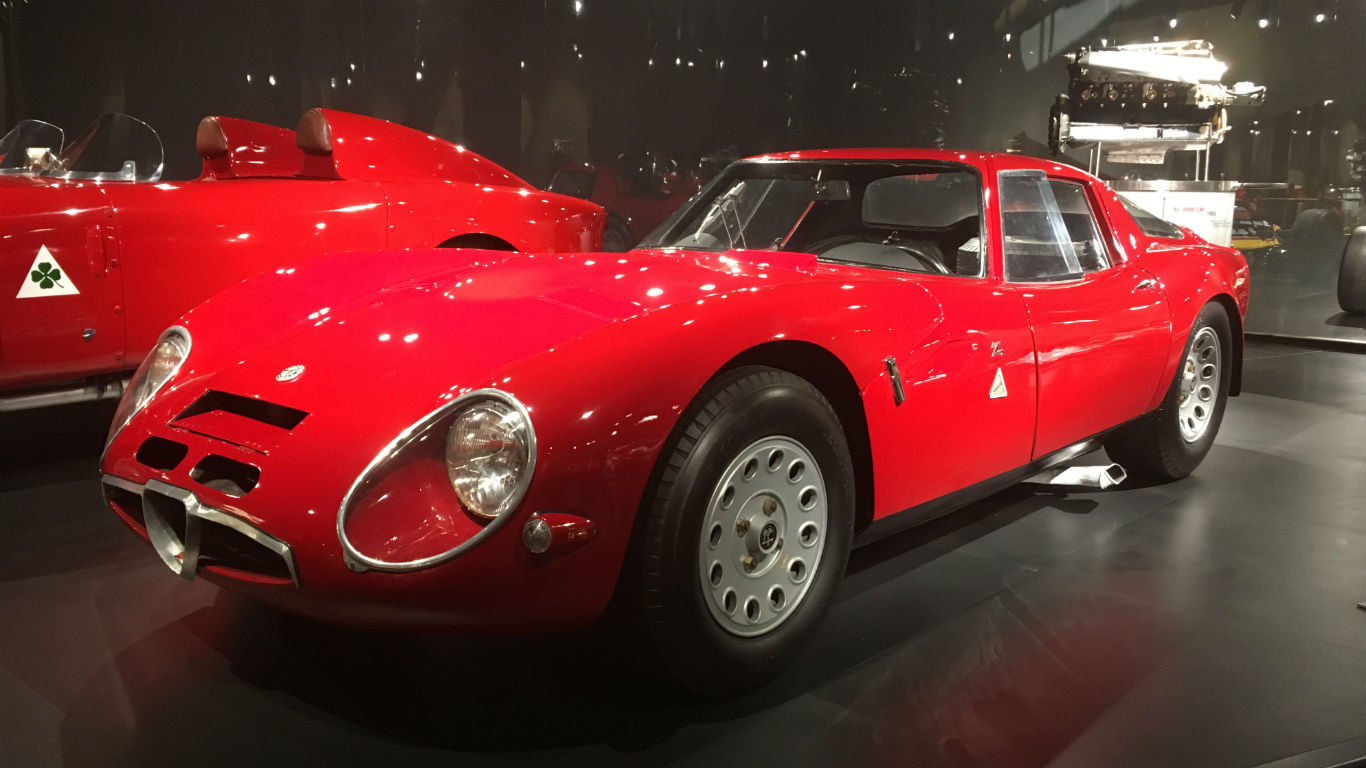 The 1965 Giulia TZ 2 bears more than a passing resemblance to the Ferrari 250 GTO. In short, it’s utterly fabulous. Its powertrain, however, is more modest; where the Ferrari has a 300hp V12, the Alfa makes do with a 170hp four-cylinder twin-cam. Even so, with a tubular spaceframe chassis and lightweight fibreglass panels, the TZ 2 was quick – as class wins in the Targa Florio and numerous other events proved. 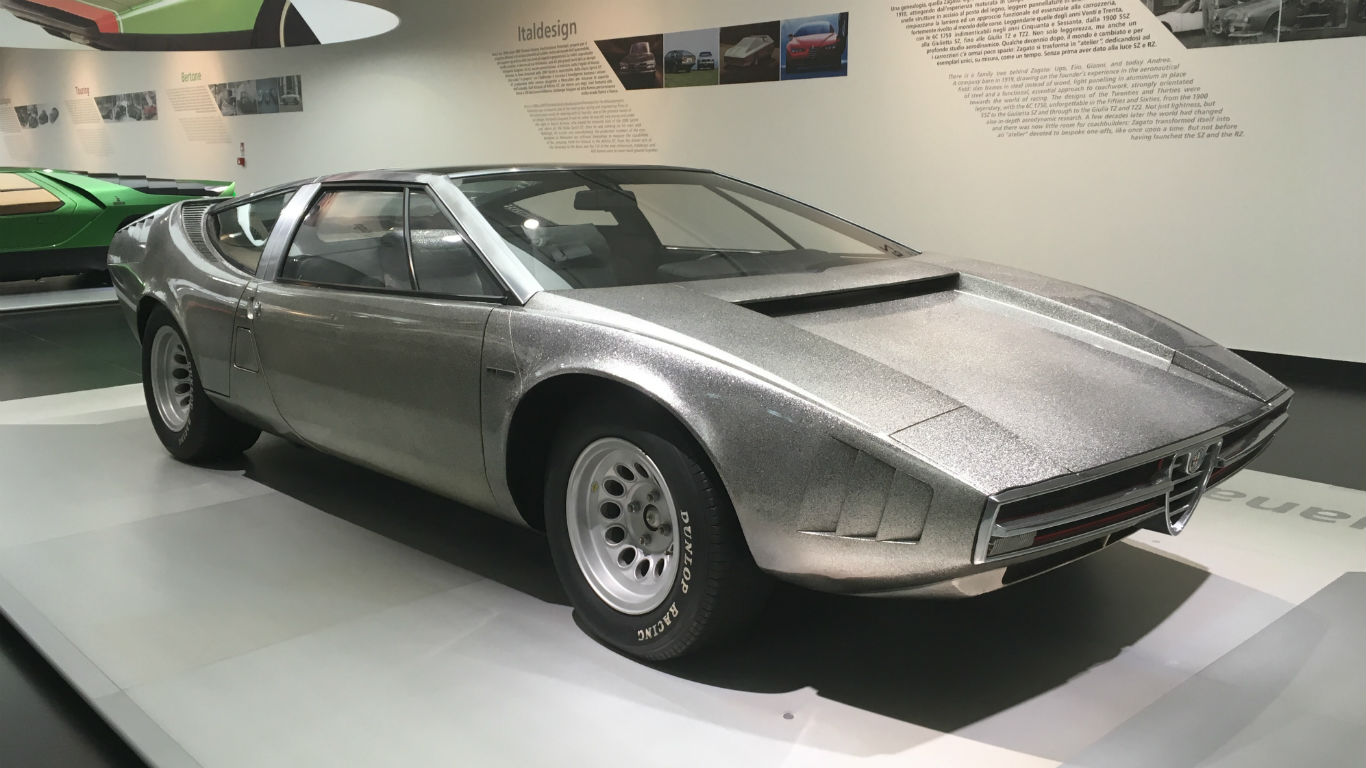 Based on the rolling chassis of the 33 Stradale, the Giugiaro-penned Iguana concept was rather more angular, but no less striking. Its mid-mounted 2.0-litre V8 produced 230hp at a heady 8,800rpm, while its electrically-adjustable rear spoiler also acted as an air brake. The ‘grazed’ paint finish was unique, too. 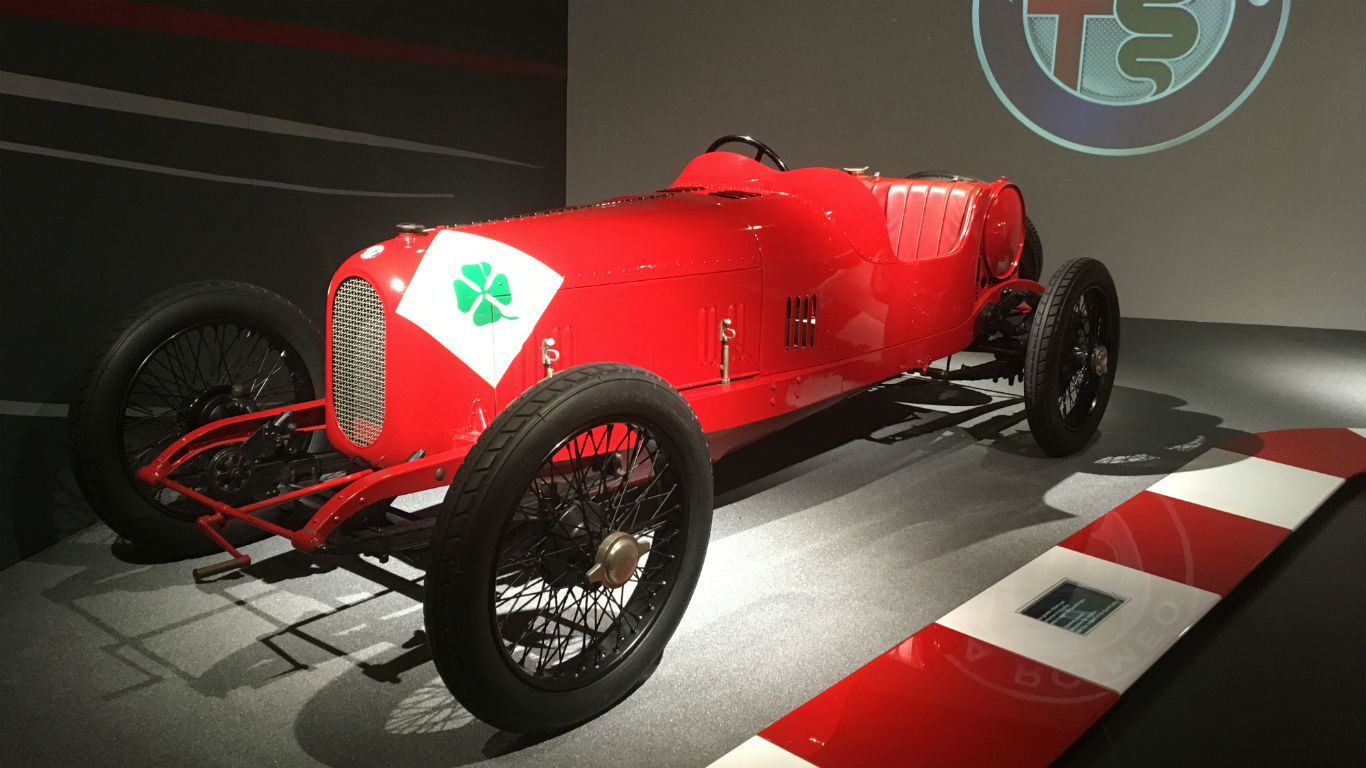 Heading up the ‘Speed’ section of the Museo Storico is this 1923 RL Targa Florio – the first car to wear the cloverleaf ‘Quadrifoglio’ badge. Driven by Ugo Sivocci, it won the Targa Florio at its first attempt, with Ascari finishing second in another RL. The four-leaf clover was added afterwards as a symbol of good luck that’s still seen on fast Alfa Romeos to this day. 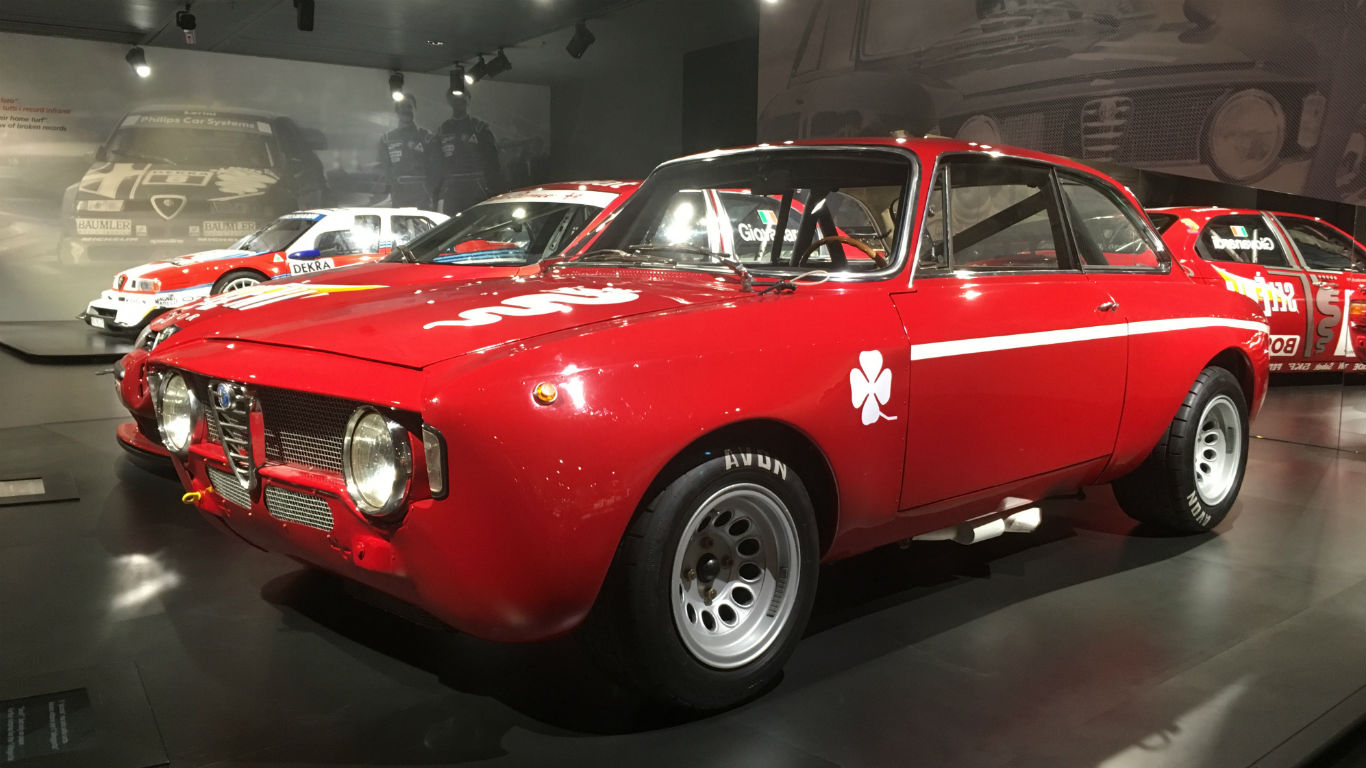 Small but mighty, the Bertone-bodied GT 1300 Junior packed a 165hp punch: not bad in a car weighing just 760kg (note the lack of bumpers to save vital kilos). The Bertone-bodied Junior was a hit on the road and race track, winning the European Championships in 1971 and 1972. We bet it’s an absolute riot to drive. 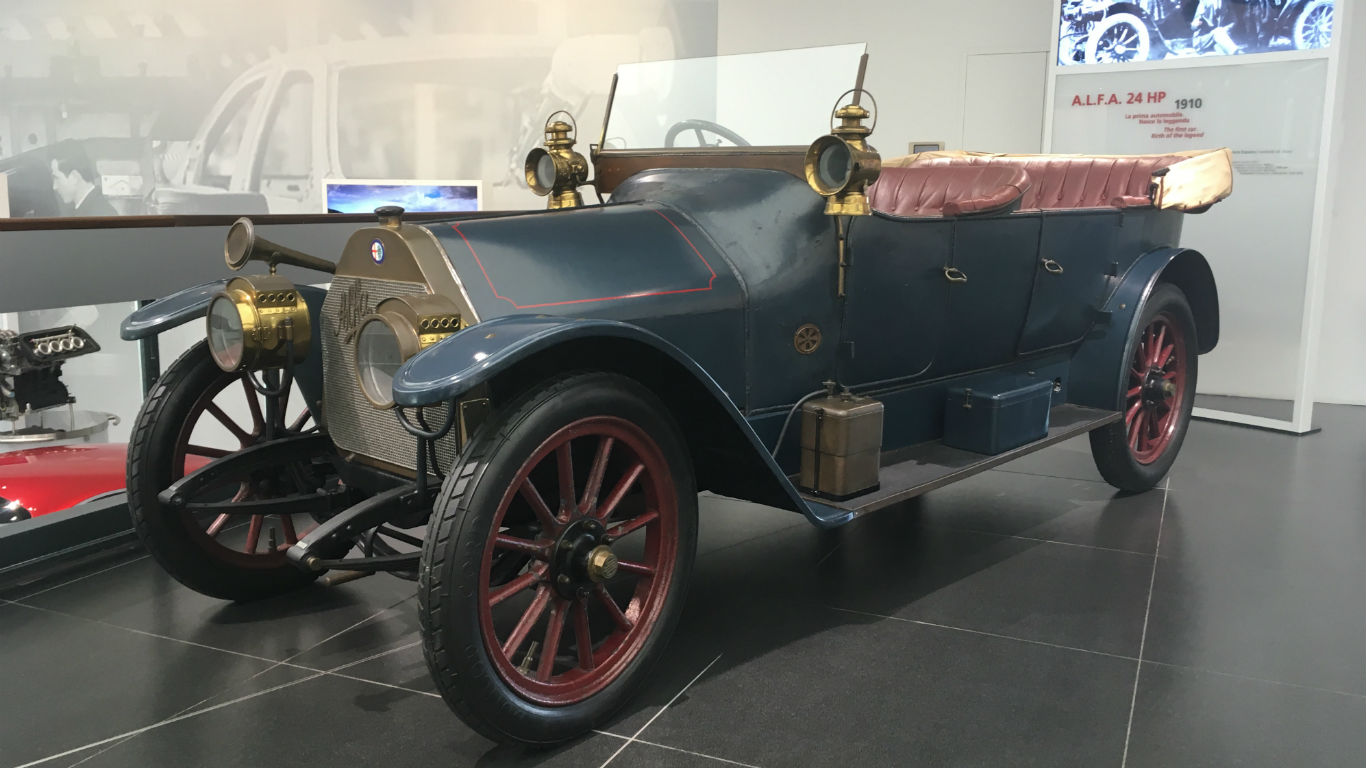 We conclude at the beginning, so to speak. The 24 HP is the very first Alfa Romeo, and a remarkably luxurious car for 1910. It had a side-valve engine, four-speed gearbox and a top speed of 60mph: mildly terrifying with drum brakes on the rear wheels only. Production was halted by the outbreak of the First World War, by which time more than 200 had been made.