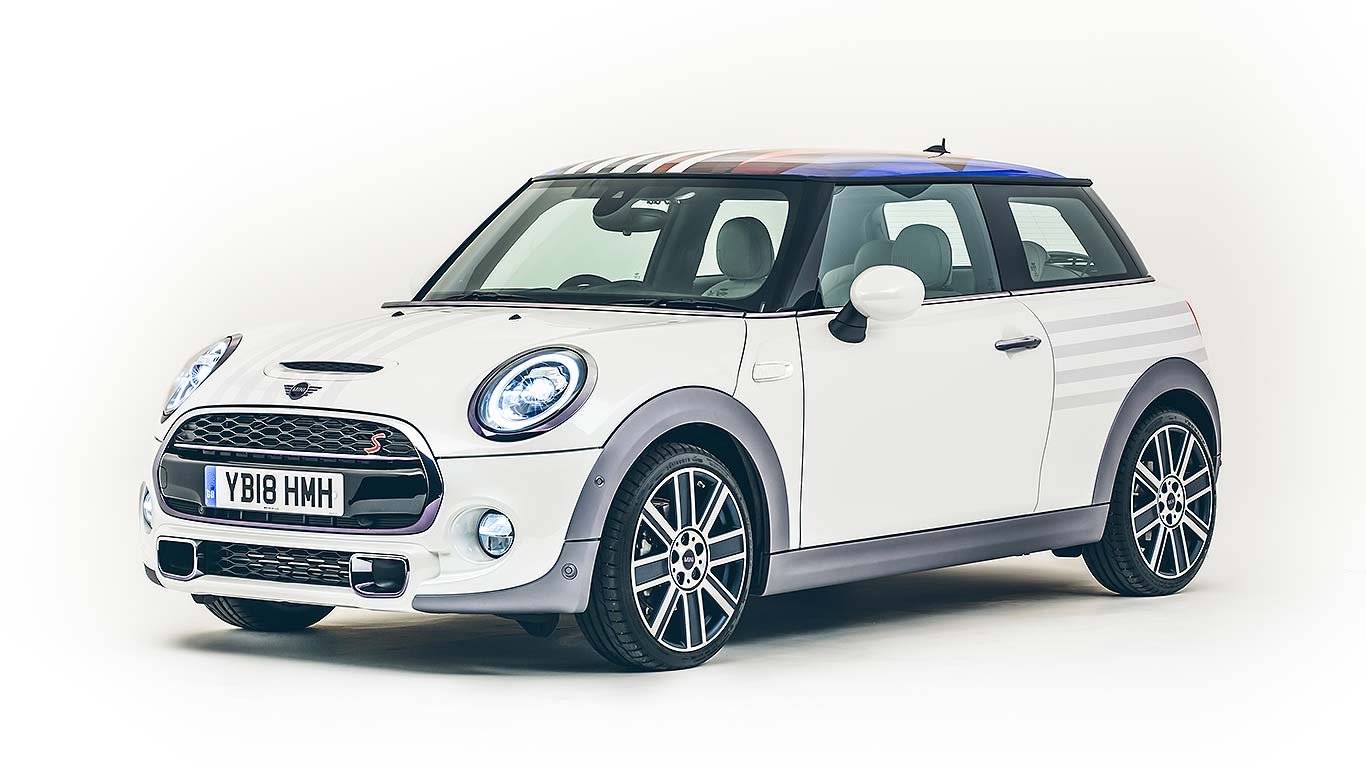 Mini has been on another Mini adventure – to create a one-off Mini Hatch celebrating the wedding of Prince Harry and Meghan Markle. The car will commemorate the wedding on 19 May, and afterwards be publically auctioned off to raise money for The Children’s HIV Association (CHIVA), one of Harry and Meghan’s chosen charities.

But why has Mini made a special Hatch for the royal couple? Well, said Oliver Heilmer, Mini head of design, because it’s “an iconic British brand with almost 60 years of history in the UK”. Mini wanted to “mark the royal wedding with this special charitable gift”. 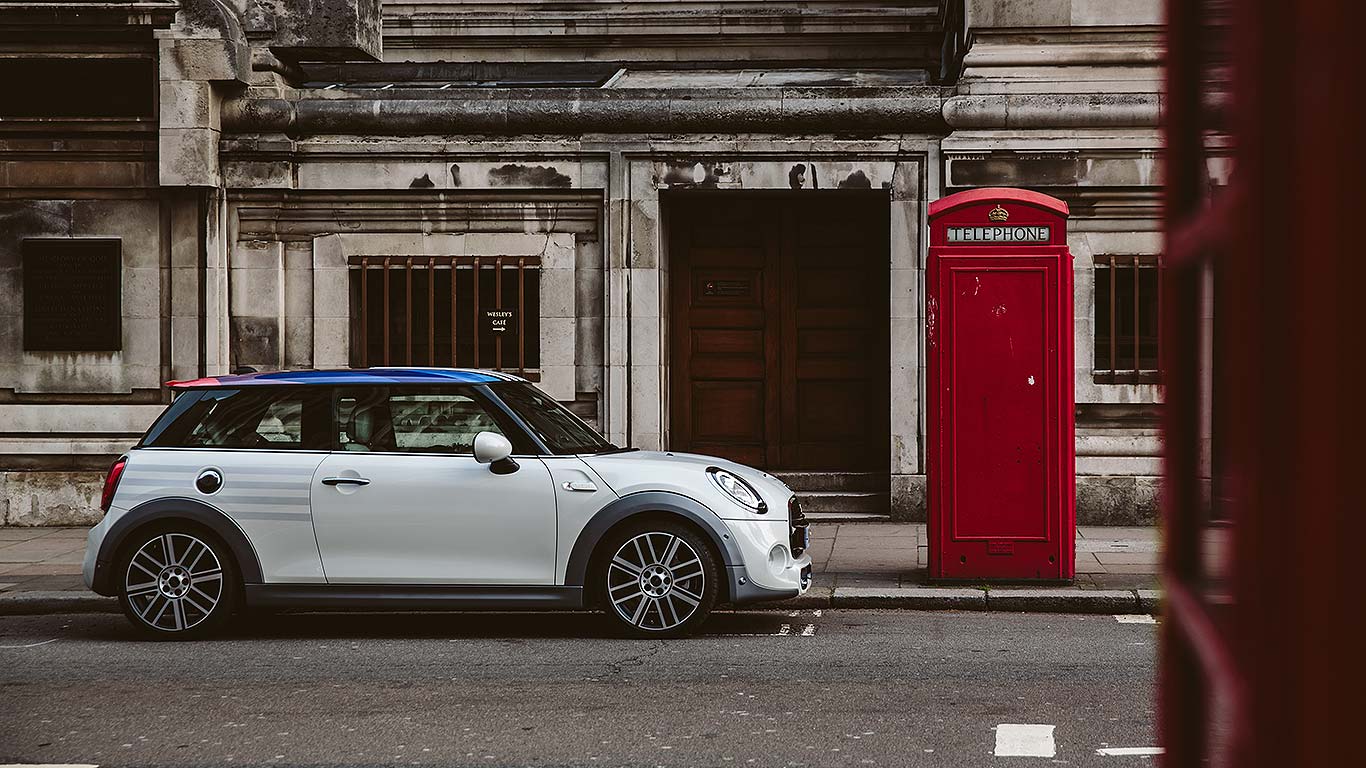 Mini Design says the standout features are the bespoke roof graphic, plus exterior and interior trim details that have been 3D-printed and personalised. There’s special embroidery too, ensuring this is a genuine one-off Mini. 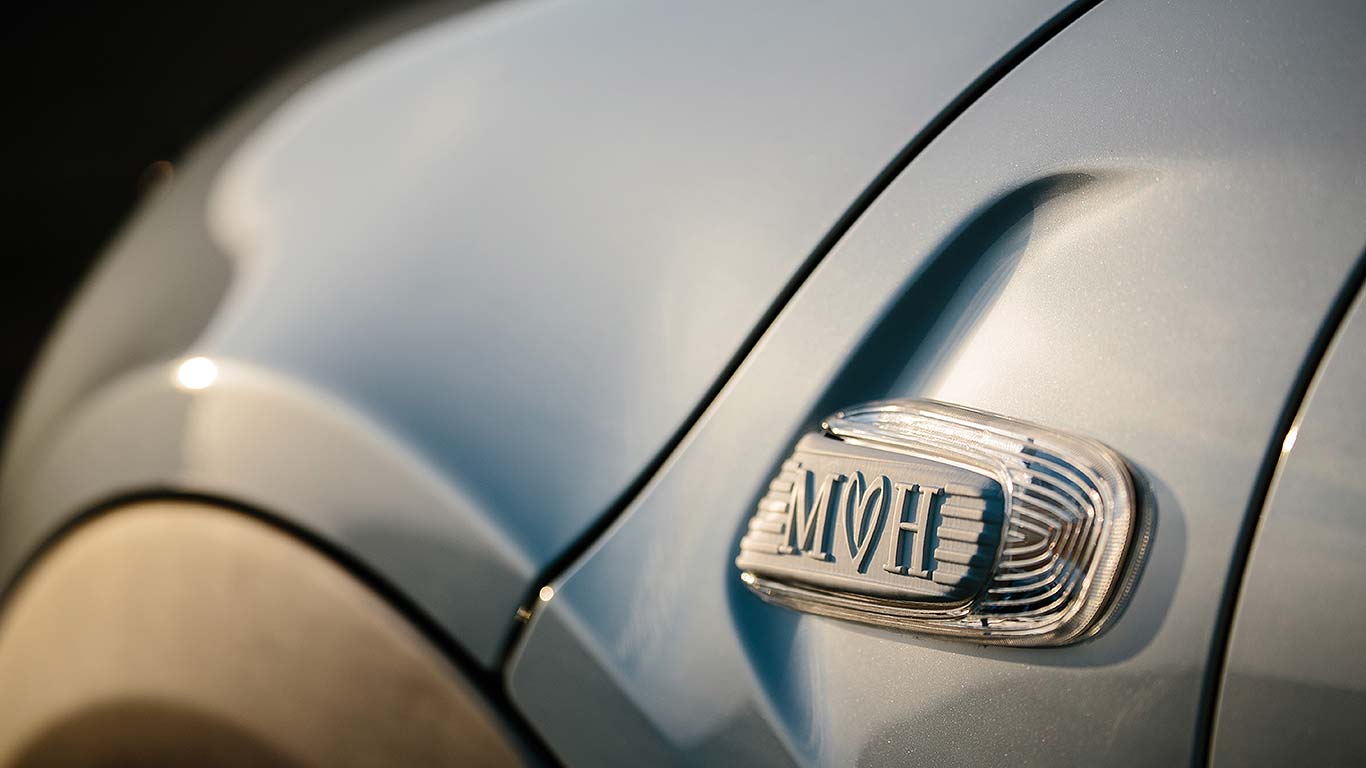 Perhaps some elements are a bit cheesy. We can’t see ‘M hearts H’ making it to the official royal wedding car. But that’s the beauty of Mini’s new personalisation service – you can be a bit cheeky and, if you don’t like it, take it off and replace it with something else.

As you can the puddle light that shines when the door is opened: in this one-off, it currently projects ‘Just Married’ onto the ground… 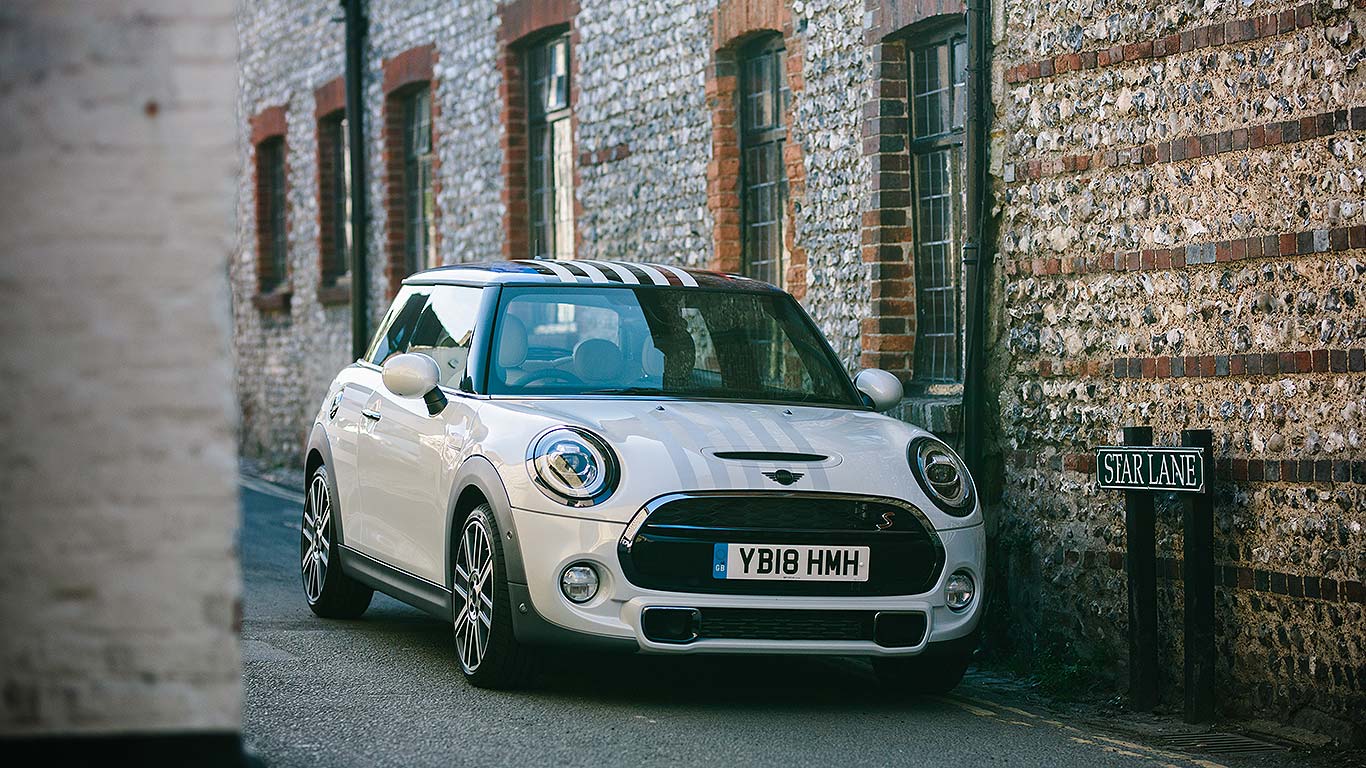 The one-off Mini is painted in Crystal White. It wears a smart set of dark blue matt metallic alloys, and the surrounds for the headlights are also finished in a blue-black clear coat tint.

Other chromework to be given the blue-black tint include the grille and doorhandles. It’s a neat finish – we wonder if it’s coming to future production Minis? 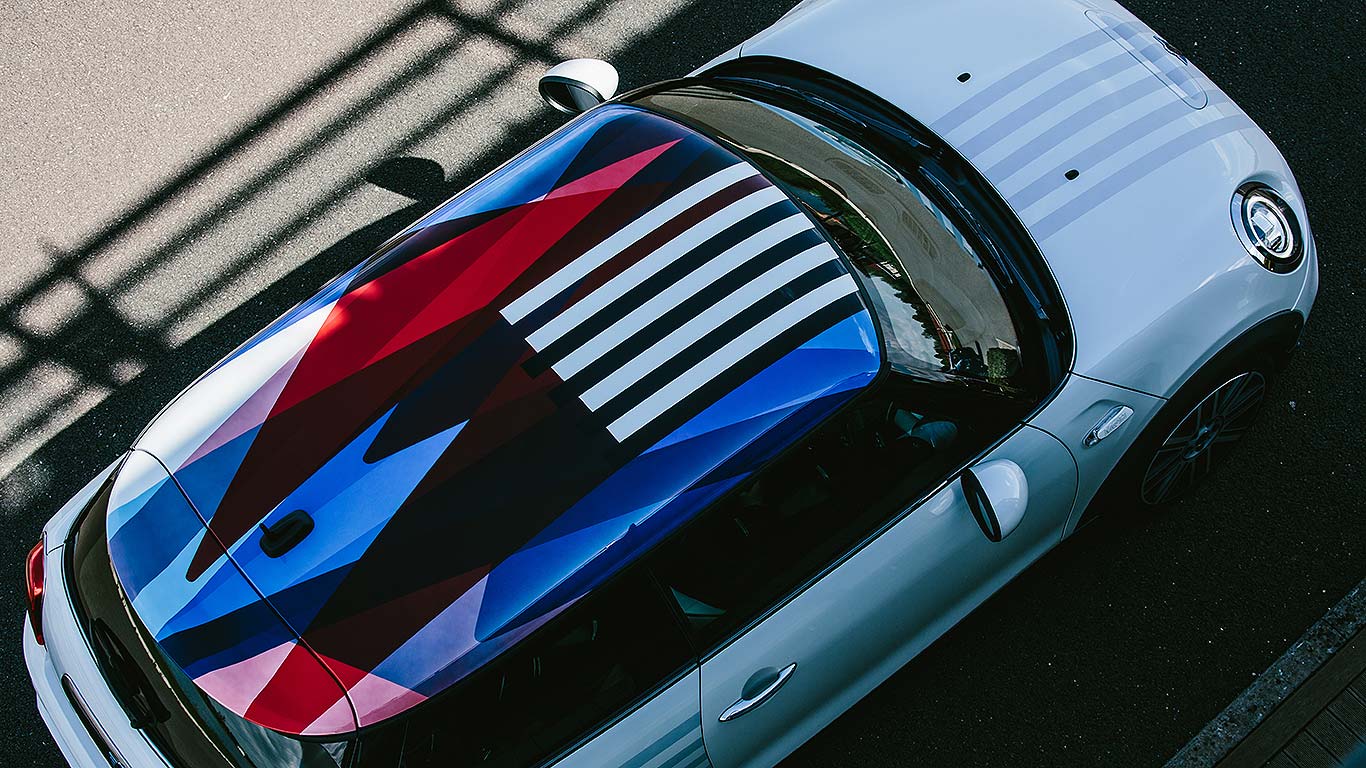 The standout is the roof. It’s a hand-crafted bespoke design that marries the Union Jack and Stars & Stripes flags. The graphics were applied by hand and then painted by hand over several layers – it’s a real work of art, rather than just a simple wrap. 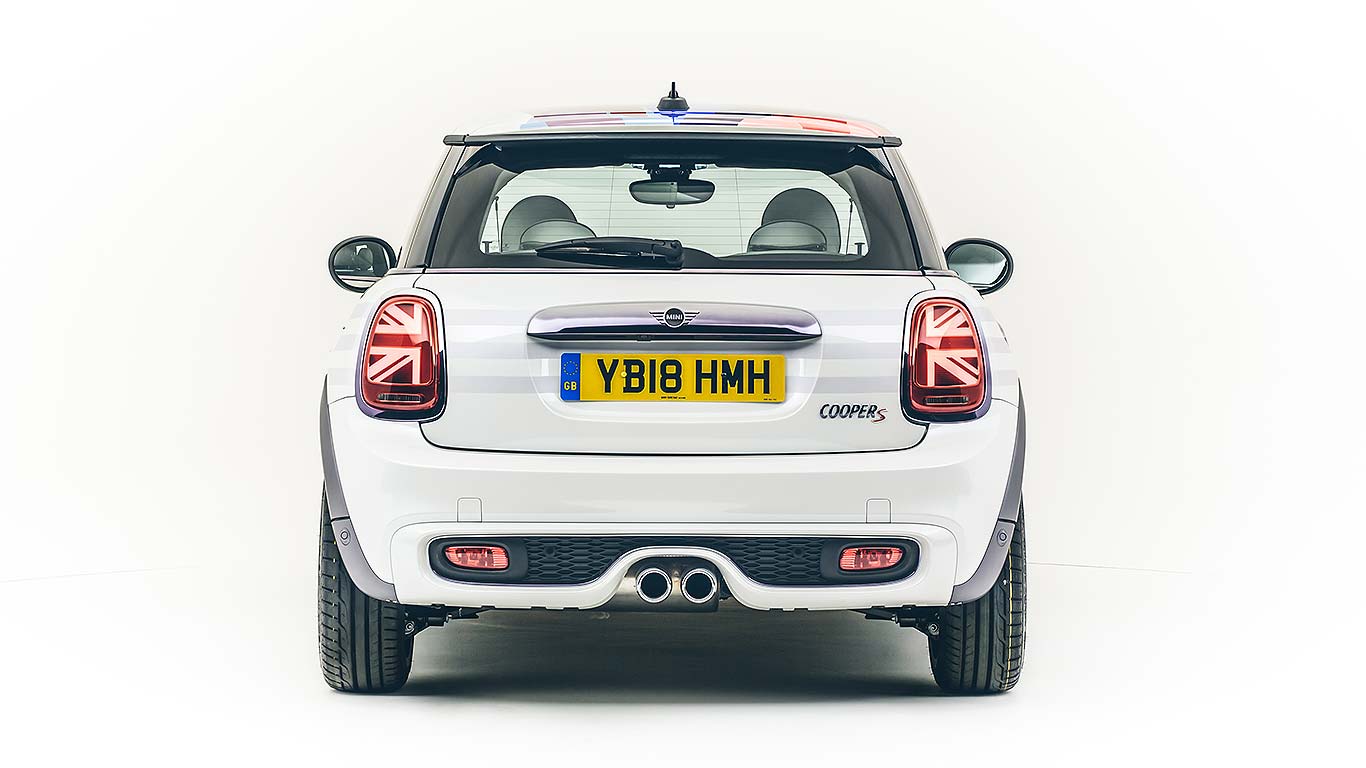 But the Union Jack tail laps aren’t actually a feature just for the Harry and Meghan special – they’re fitted to all new 2018 Mini Hatch and Convertible models. 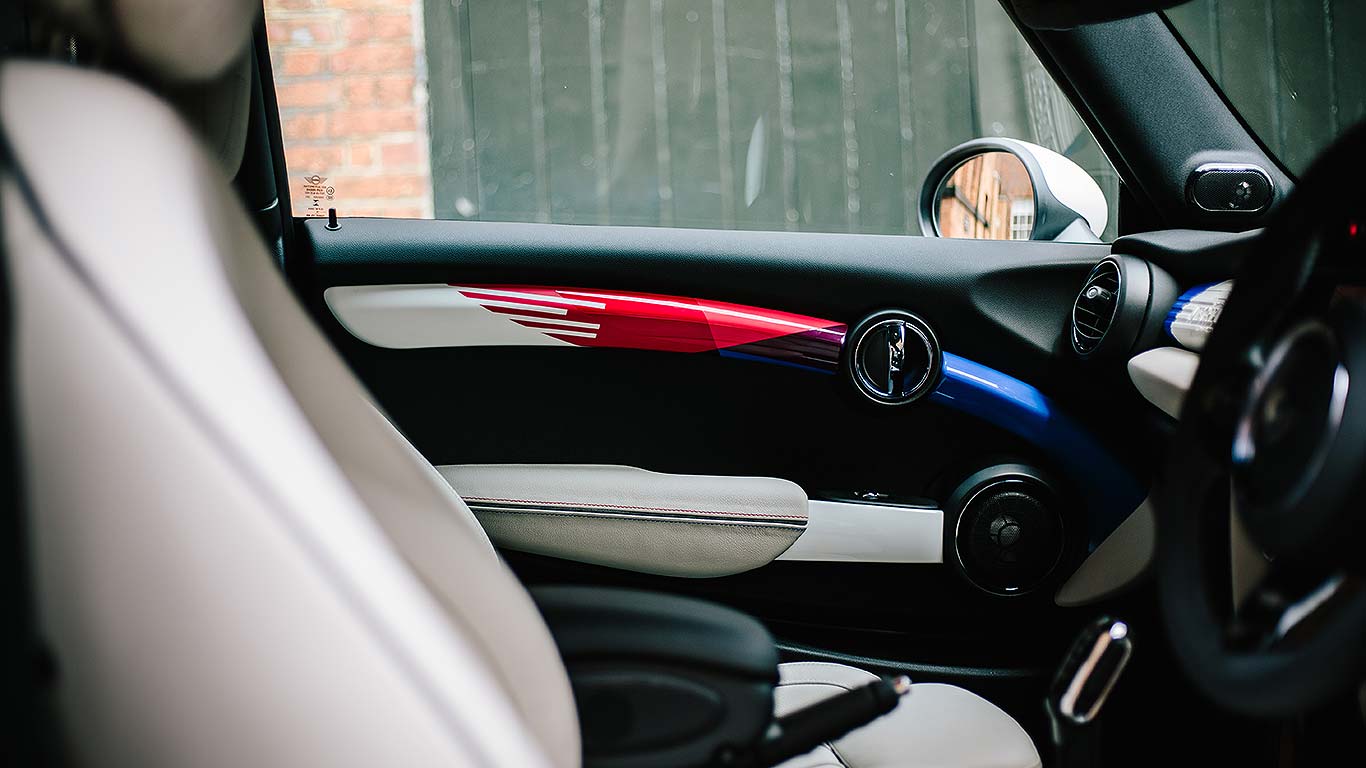 And inside? Satellite grey leather is used to highlight all the special features within. These include Harry and Meghan’s name printed on the passenger side accent panel, feature graphics incorporated into the door trim strips and the panel behind the steering wheel.

Mini’s stitched an abstract Union Flag into one head restraint and a Stars & Stripes into the other, and hand-crafted other elements within the bespoke interior.

It’s perhaps not what you’d see on an official royal wedding car, but we like what Mini’s done here: have a bit of fun and raise a bit of money for charity at the same time. Indeed, a part of us does rather wish that this modern royal couple could drive away from St. George’s Chapel in this custom modern Mini…

Take a look to see how the Mini designed for Harry and Meghan was created, both outside and in…