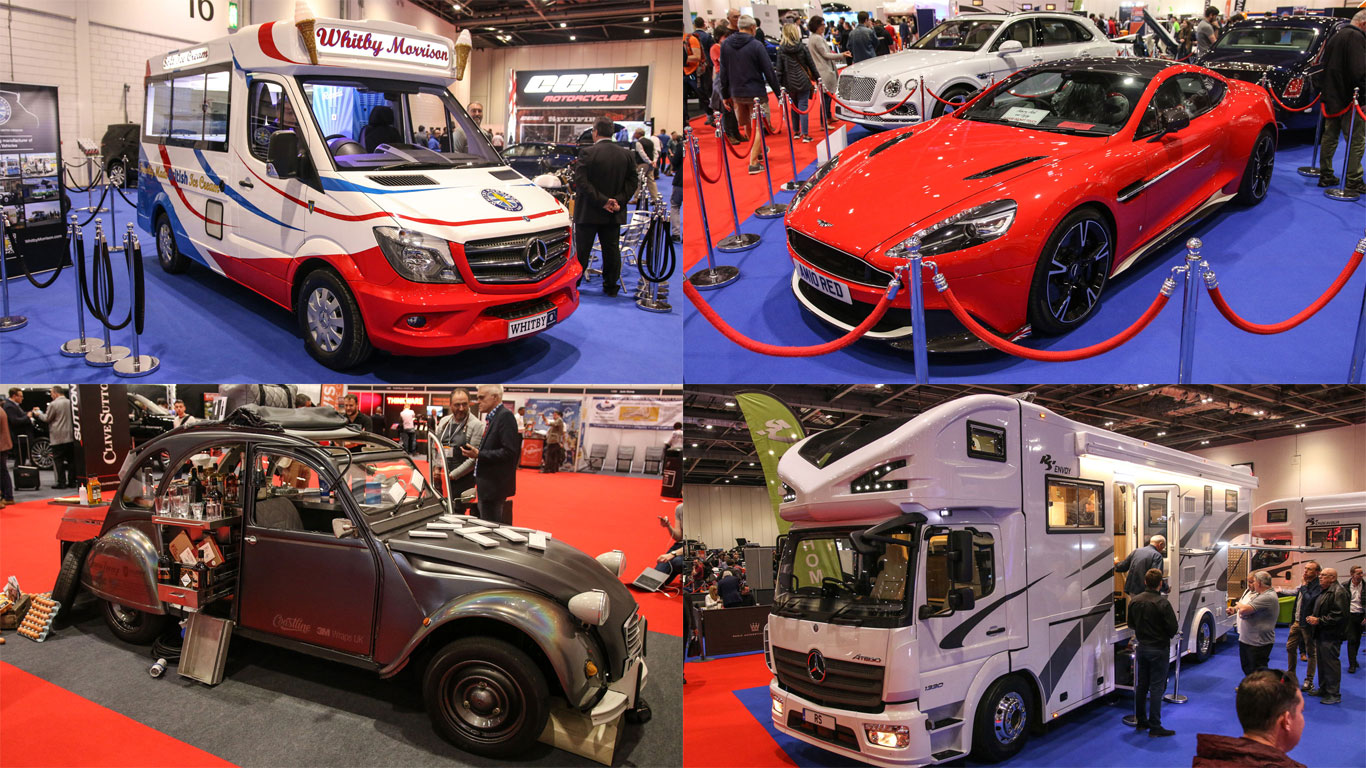 Former Stig, Ben Collins, praised its “fantastic atmosphere”, while Mike Rutherford (no, not the Genesis guitarist), called it “the motoring event of the year”.

Yes, the London Motor Show is underway, with the organisers promising a “phenomenal event in London for car enthusiasts alike”. Never able to resist a party with a fantastic atmosphere, we took a trip to ExCeL to check out the motoring event to beat all motoring events. Probably. 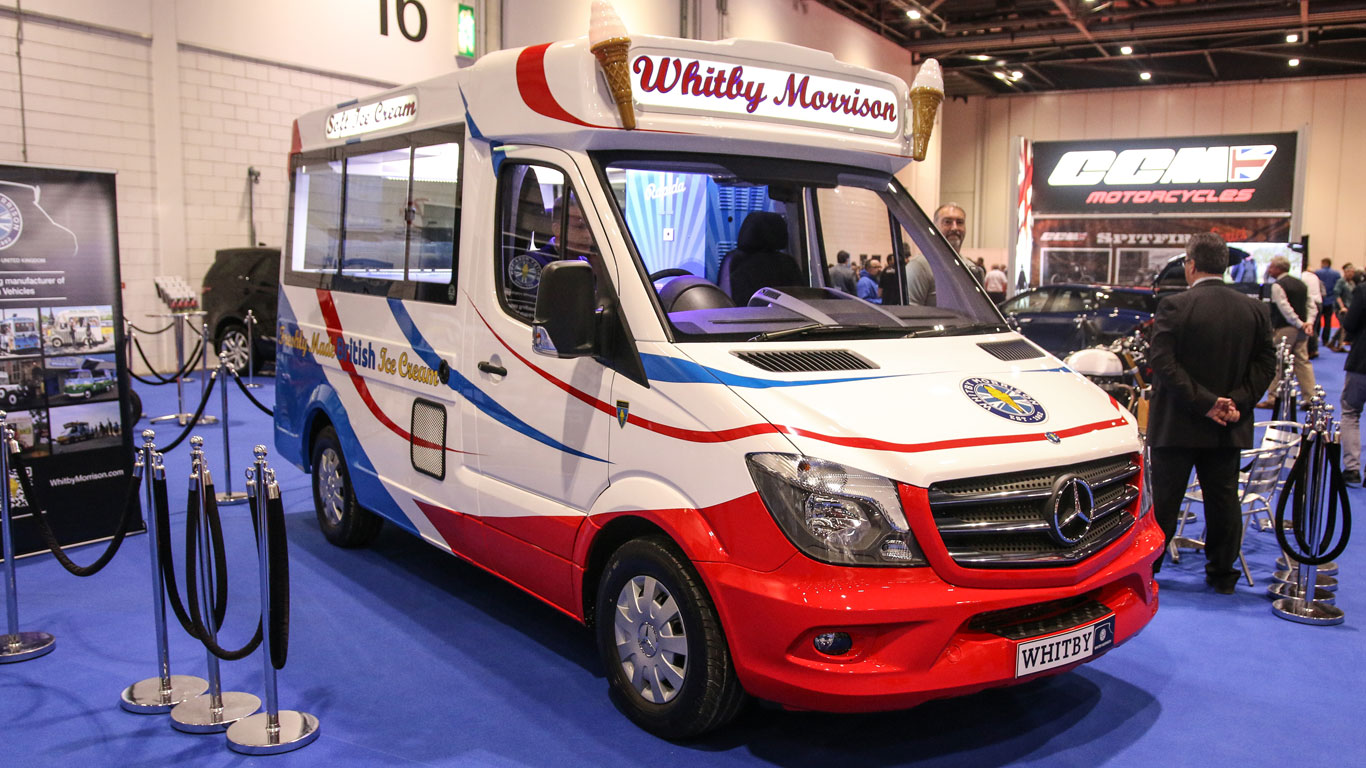 No party is complete without a bowl of jelly and ice cream, so if you bring the jelly, Whitby Morrison will provide the ice cream.The British manufacturer, famous for producing ice cream vans for the global market, is showcasing its latest model, based on the Mercedes-Benz 314 SWB.

Never one to miss the opportunity to deliver a witty pun, Alec Mumford, chairman of the London Motor Show, said the presence of Whitby Morrison is sure to “whip up a storm”. While it’s not clear if you’ll be able to send the sound of Greensleeves reverberating around ExCeL, visitors are invited to climb aboard the van to pretend to make a Mr Whippy. 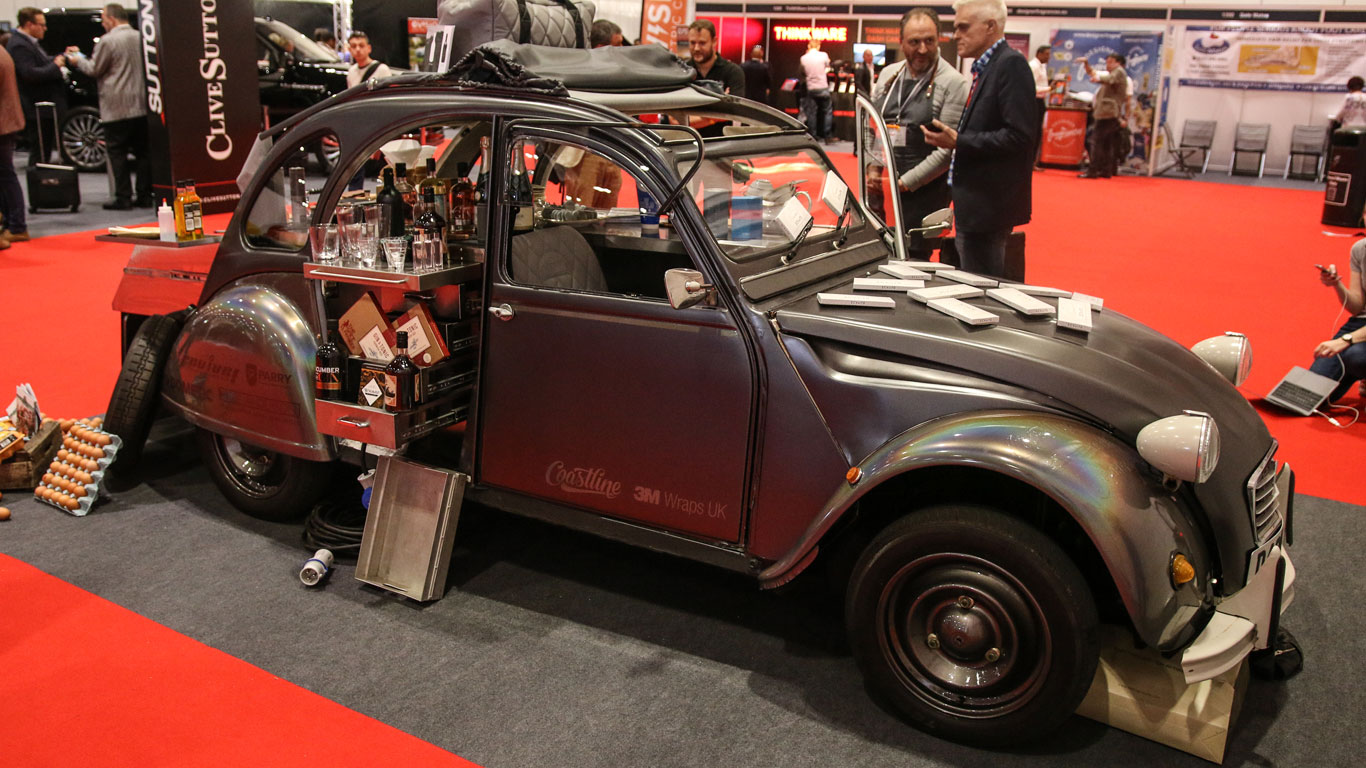 From a British institution to a French icon: meet the 2CVat70. Built to mark the 70th anniversary of the Citroen 2CV, this British-built project was designed to set a record for the world’s smallest food truck. It’s fresh – fresh… food… geddit? – from its debut at Bicester Heritage, where it was flown in by helicopter.

A team of people completed the conversion over the course of three months, transforming the 2CV Dolly into a fully functioning kitchen. Disappointingly, Alec Mumford missed a chance to deliver a 2CV or food-related quip, saying: “We are delighted that the public visitors to this year’s show will be the first to marvel at this characterful reform”. Come on, Alec, not even something about a ‘Trolley Dolly’, ‘eggs in one basket’, or even ‘viande de cheval’. 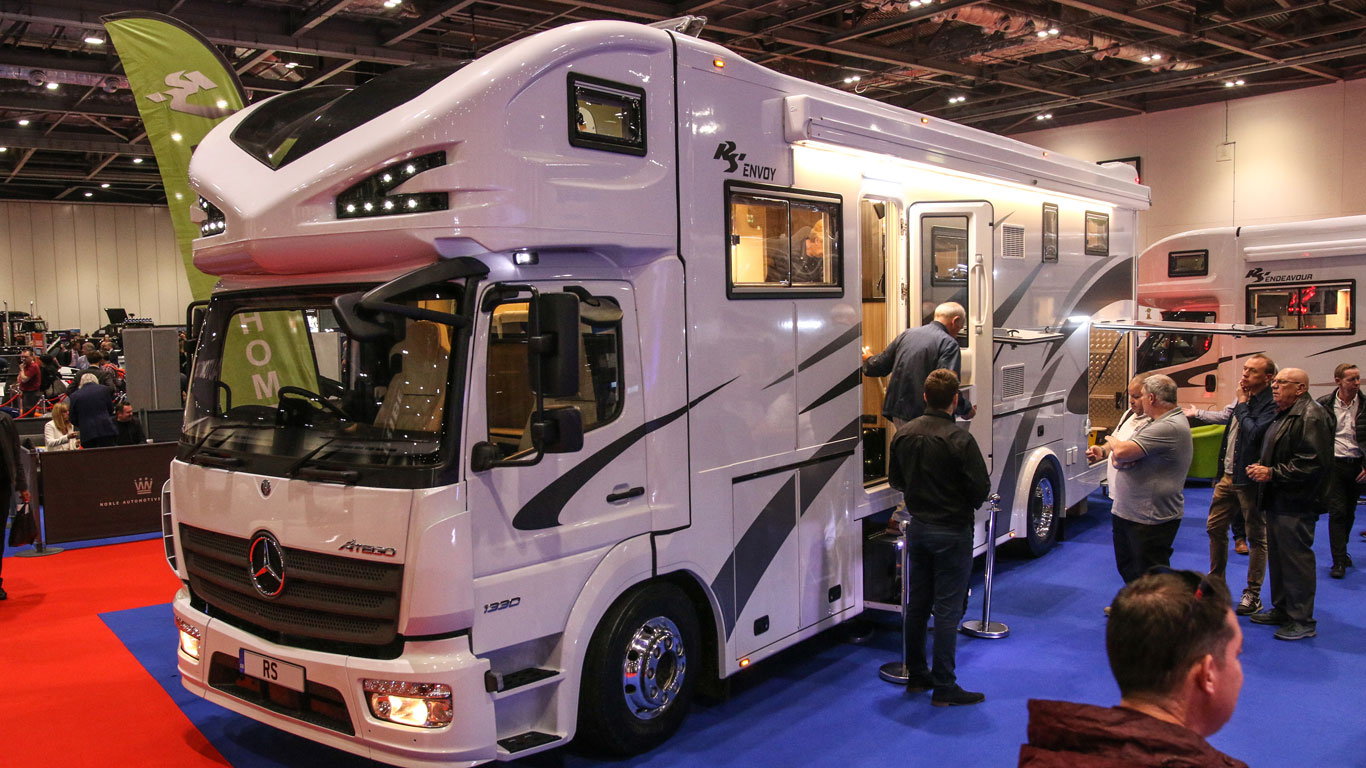 It’s got the name of a hot hatch, the price tag of a supercar, and a set of roof-mounted LEDs designed to upset the nation’s Audi drivers. It’s the £285,000 RS Envoy, and it’s based on the chassis of the Mercedes-Benz Atego. The 8-berth motorhome features a full-size kitchen, washroom, Sky HD, central heating and a 440-litre fresh water tank. Goldfish are optional.

Missing the chance to make a comment about this being a ‘special Envoy’, Alec Mumford said: “RS Motorhomes are at the very height of luxury in the leisure and motorsport market. To have this great British brand displayed at what will be a very patriotic London Motor Show is a real honour.” We have to retract our comment about Alec never missing the chance to deliver a witty pun. 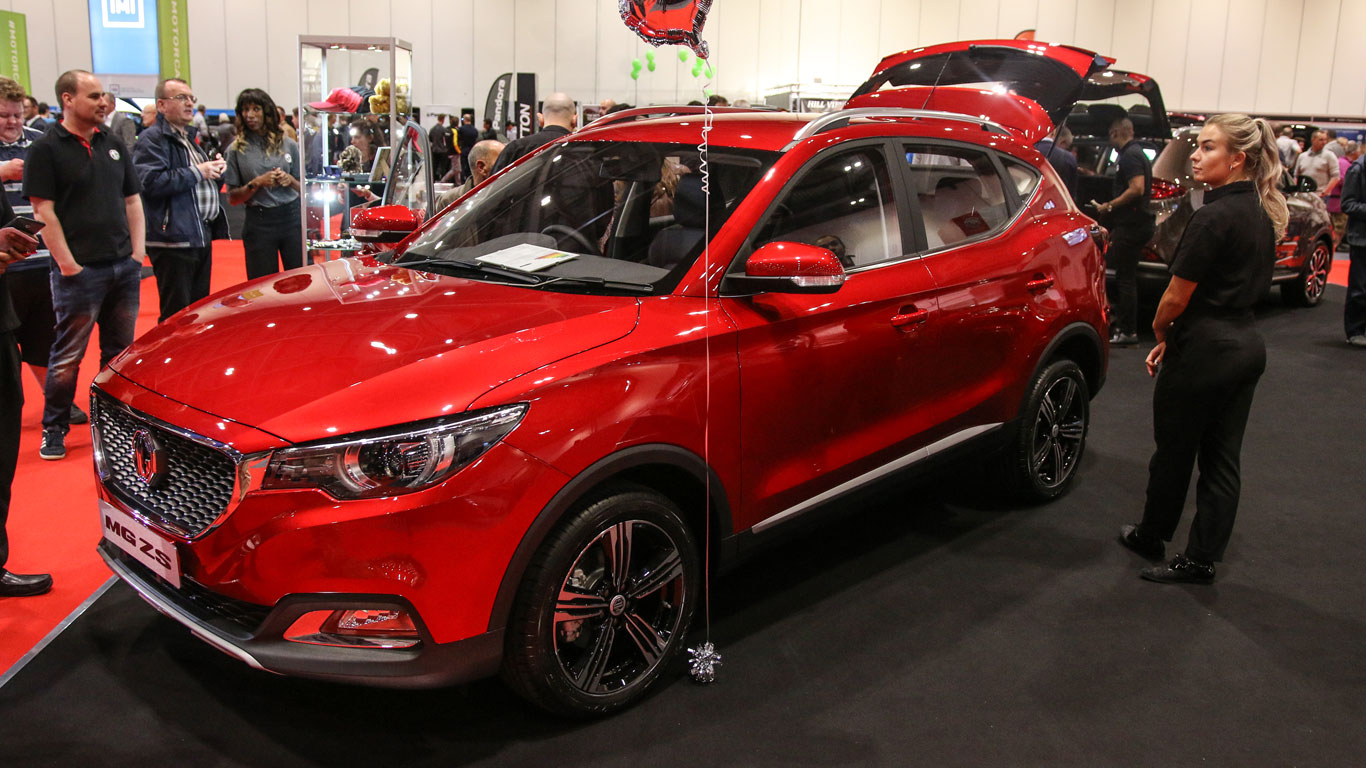 Sticking with the patriotic theme, this is the thoroughly British MG ZS SUV, assembled in China by MG’s Chinese owners, SAIC. According to MG, the ZS is “flying out of the brand’s dealerships across the UK”, which might account for the rise in the number of UFOs spotted since the car was launched in November.

Sadly, the MG ZS is unable to take flight, but prices start from £12,495 for the Explore model, increasing to £17,495 for the Exclusive with an automatic transmission. Alec Mumford said: “We are thrilled that the stunning MG ZS will be at the show to represent the brand. It is particularly pleasing to see a manufacturer roll out reliable vehicles that are supported by faithful warranties.” Meanwhile, the brilliantly-named Daniel Gregorious of MG Motor UK, said: “Our full range of cars will be on display and visitors to our stand will be impressed by the style, quality and price of our modern MG models.” 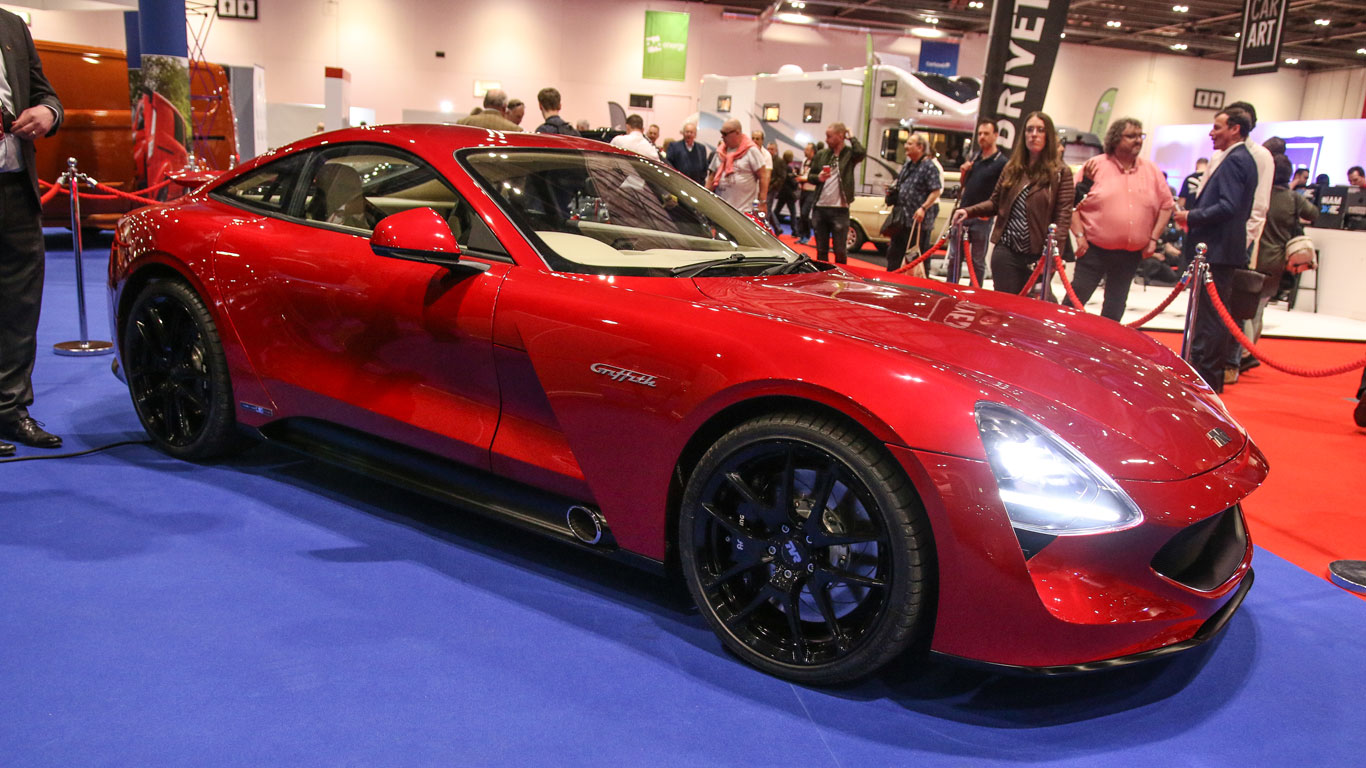 It shares its name with Hollywood actress Melanie Griffith, but while she is known for going Crazy in Alabama, the TVR can go crazy just about anywhere. It’s powered by a 5.0-litre V8 engine producing around 500hp, which is enough to propel the Griffith to 62mph in under four seconds, before hitting a top speed of over 200mph.

“TVR is just about as British as it gets!” said exclamation mark enthusiast, Alec Mumford. “The new Griffith is a seriously impressive machine that perfectly captures the iconic spirit of TVR, and we are very excited to have it on display surrounded by its compatriots.” 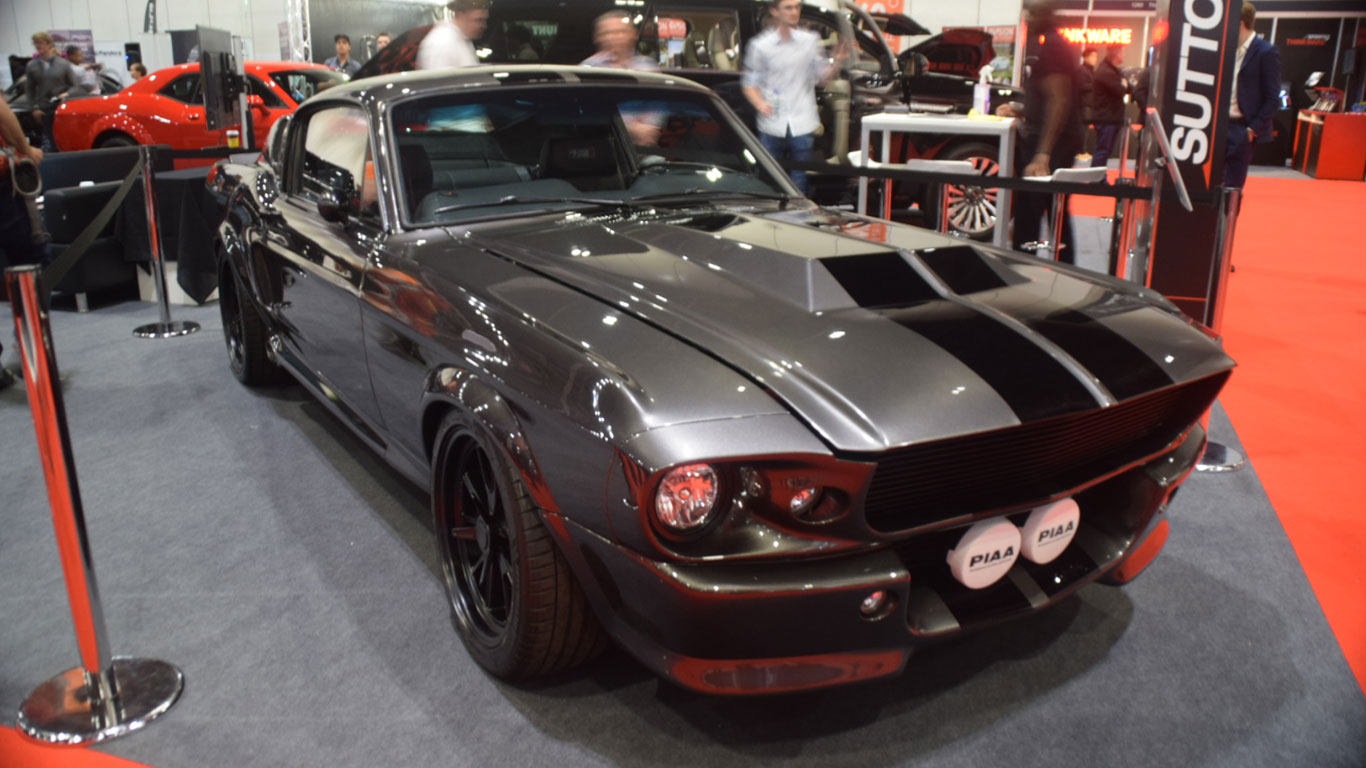 The Mustang GT500CS is built using an original 1967 Ford chassis and features a coachbuilt body finished in Magnetic Metallic paint. Power is sourced from a 5.4-litre V8 producing 520hp, while the price can range from £190,000 to £300,000 depending on specification. The London Motor Show car has a build price of around £250,000, making it slightly cheaper than the RS Envoy, but more expensive than the “stunning” MG ZS. 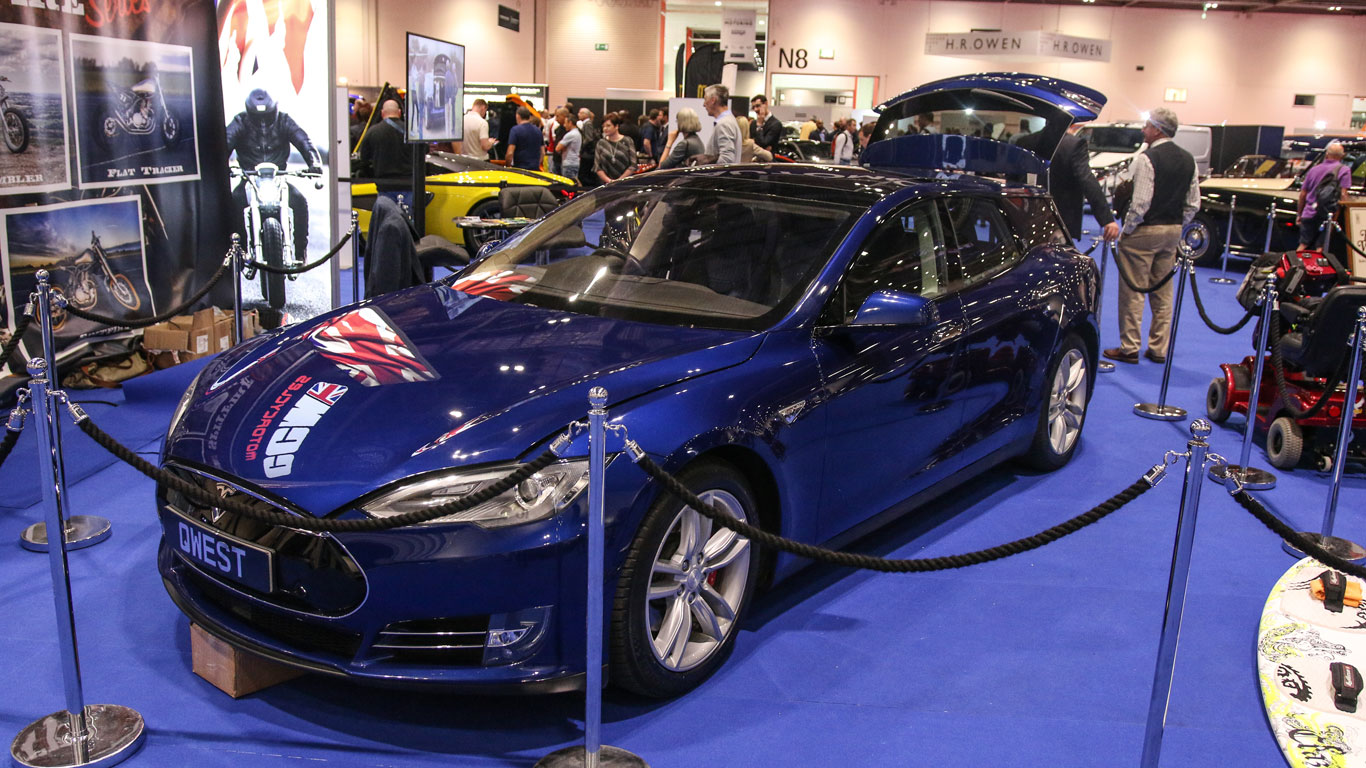 It has too many doors to be a true shooting brake, but the QWest is certainly quick enough for the gentleman racer. Carbon fibre coachbuilders QWest took a standard Tesla Model S 90D before creating a bespoke tailgate, rear roof section and D-pillar. The result is a Model S wagon that’s 12kg lighter than the donor car.

It’ll hit 60mph quicker than Alec Mumford can conjure up another quote. Speaking of which: “We’re delighted to have the world’s first Tesla-based Shooting Brake coming to the capital. This is a serious feat of engineering, using the very latest technology”. The 0-60mph time, in case you were wondering, is just 2.8 seconds. 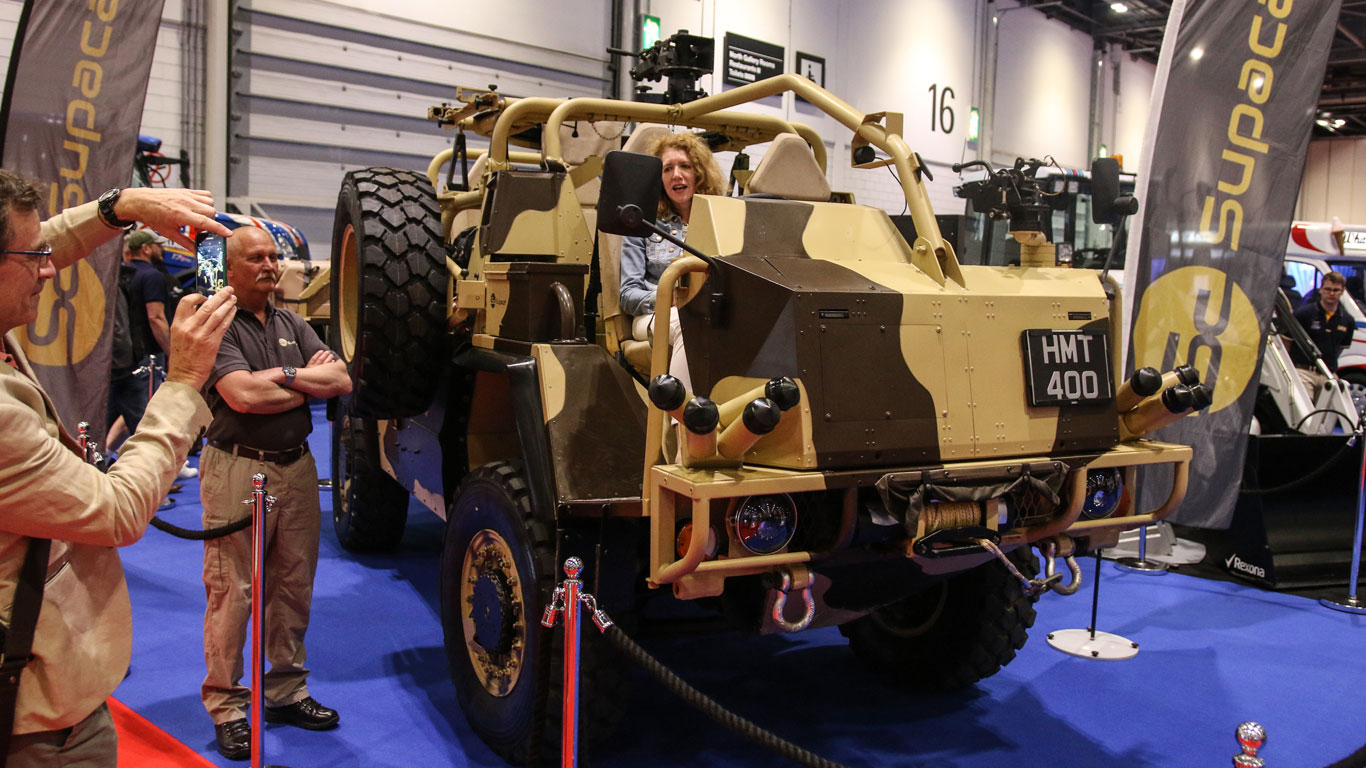 The Supacat HMT 400 is already well proven in the harsh terrain of the Afghanistan battle ground, so it should have no problems dealing with few Instagram posts at ExCeL. Designed in the late 1990s, the Devon-built machine is arguably the most rugged thing to come out of the West Country since Ben Ainslie.

Dubbed the ‘Jackal’ by the British Armed Forces, we’re tempted to say there are four days of the Jackal at the London Motor Show, but that would be a poor attempt at a movie-based pun. The HMT 400 features air suspension and is supplied with an optional mine blast and ballistic protection kit. 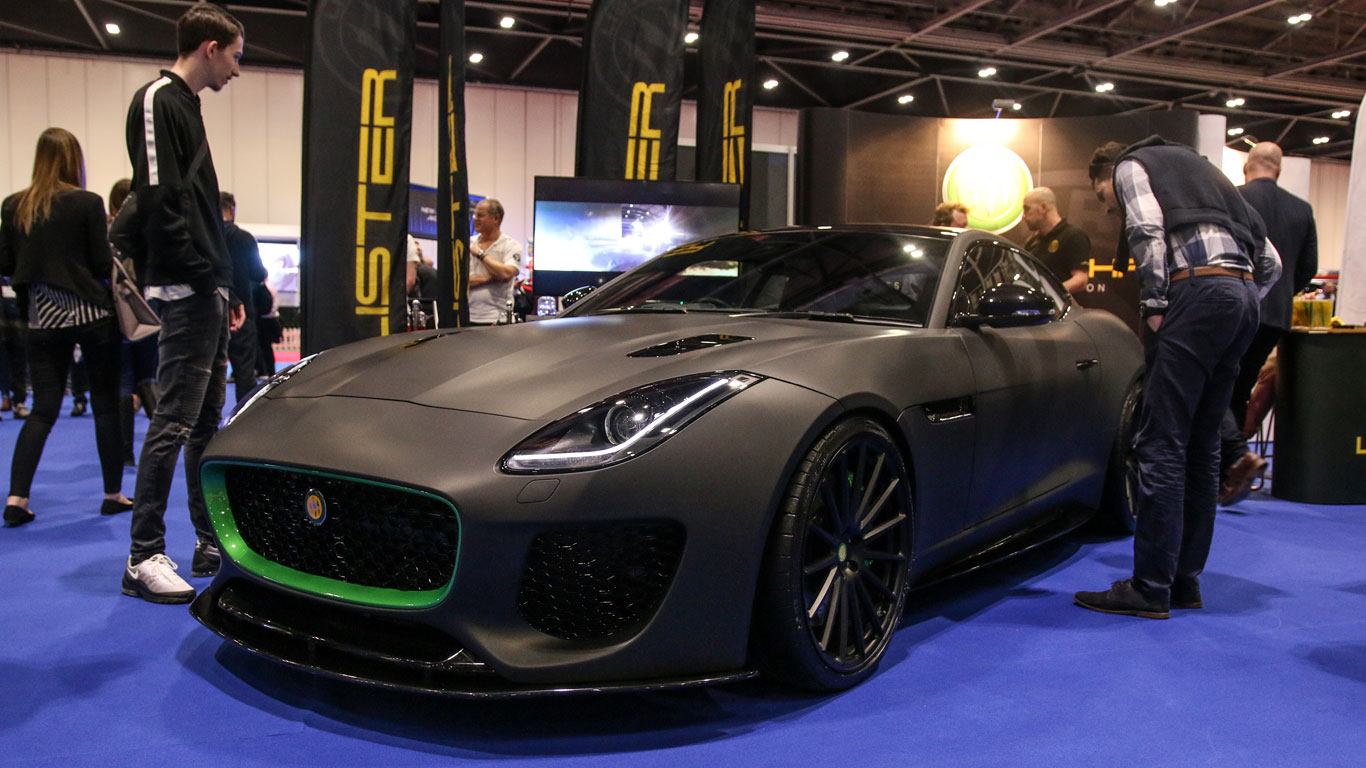 Unveiled at the Historic Motorsport International earlier this year, the Lister Thunder is returning to ExCeL for the London Motor Show. The F-Type-based Thunder is powered by a 5.0-litre supercharged V8 engine developing a devilish 666hp, which is enough for a top speed of 208mph.

The Cambridgeshire-based company will build 99 examples, each one with a price tag just shy of £140,000. “Visitors are making a bolt for the Lister stand and the Thunder is going down a storm. I expect the cars to be sold out in lightning-quick time.” Sadly, Alec Mumford didn’t say any of this. 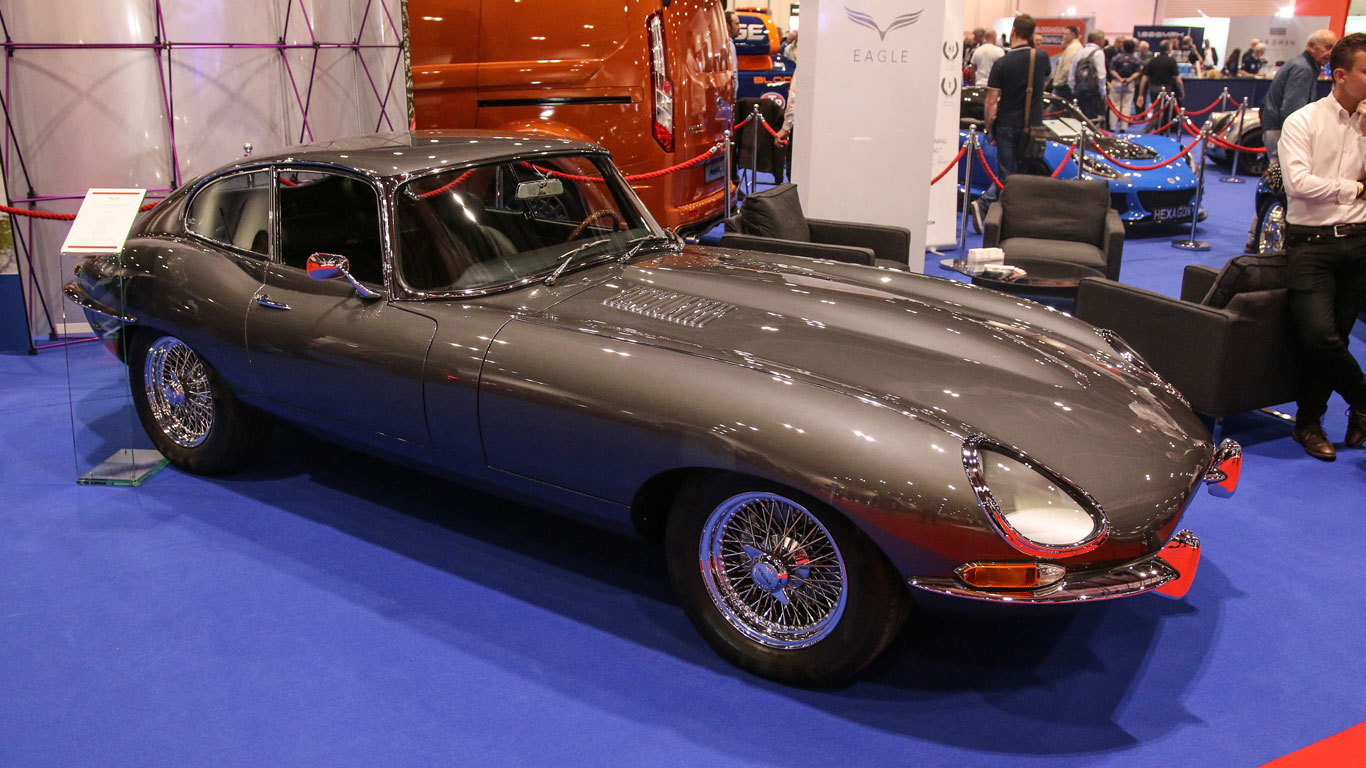 Founded in 1984, Eagle is recognised as one of the leading E-Type restorers, famed for its evolutions of the legendary Jaguar. At the London Motor Show, you’ll find the Speedster E-Type as well as a regular E-Type Coupe. Eagle restores bespoke “zero mile, better than new” E-Types to suit customer preferences. 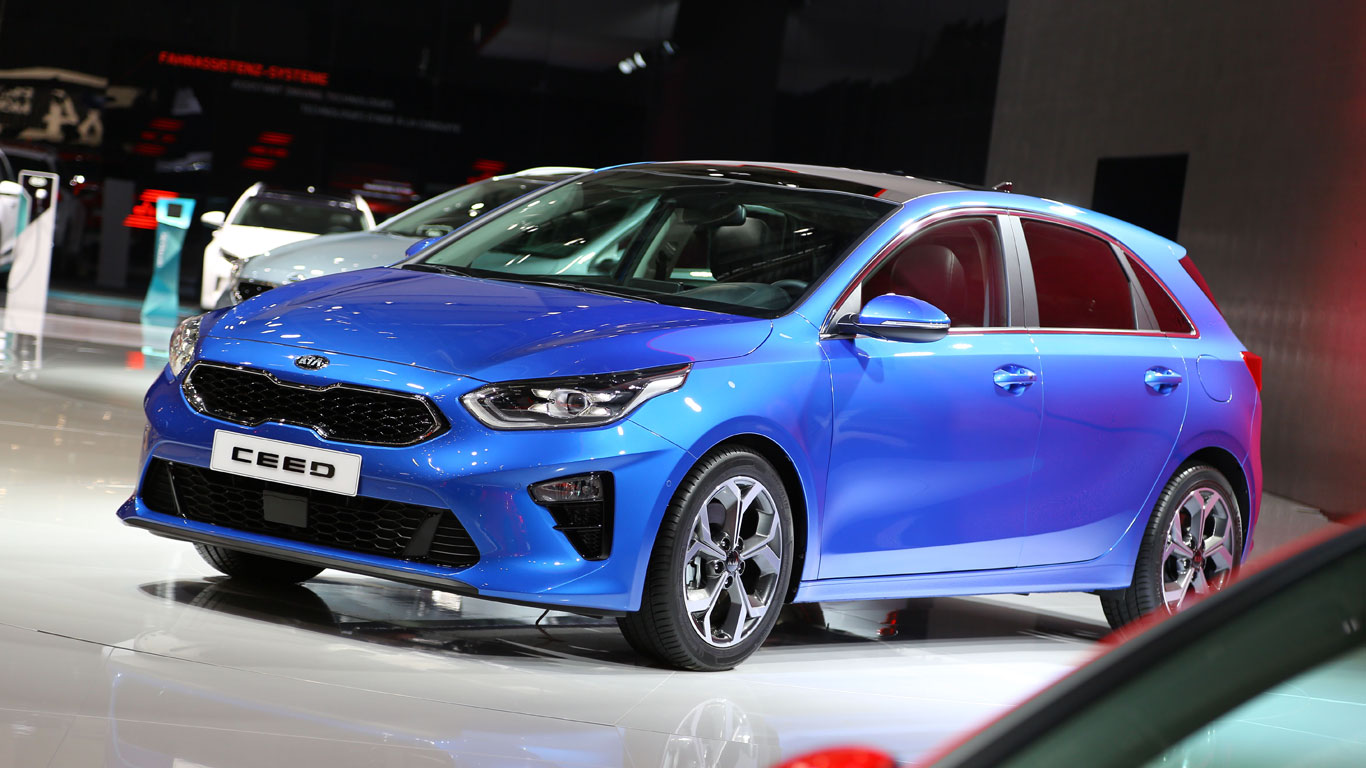 Clarkson is unlikely to be quite so gushing about the Kia Ceed, but it’s certainly not a bad looking five-door hatchback. Just don’t mention the resemblance to the Mk4 Ford Focus. The new Ceed is making its UK debut at the London Motor Show, alternatively known as “Britain’s motoring event of the year”. © Mike Rutherford, World Car of the Year juror, director and vice-chairman.

We asked the other Mike Rutherford for his views on the Kia Ceed, but he was too busy with his mechanics. Meanwhile, motoring’s Mike Rutherford said: “The Kia Stinger came close to winning the World Car of the Year title in 2018. And the all-new Ceed looks like it will be a contender for the gong in 2019.” 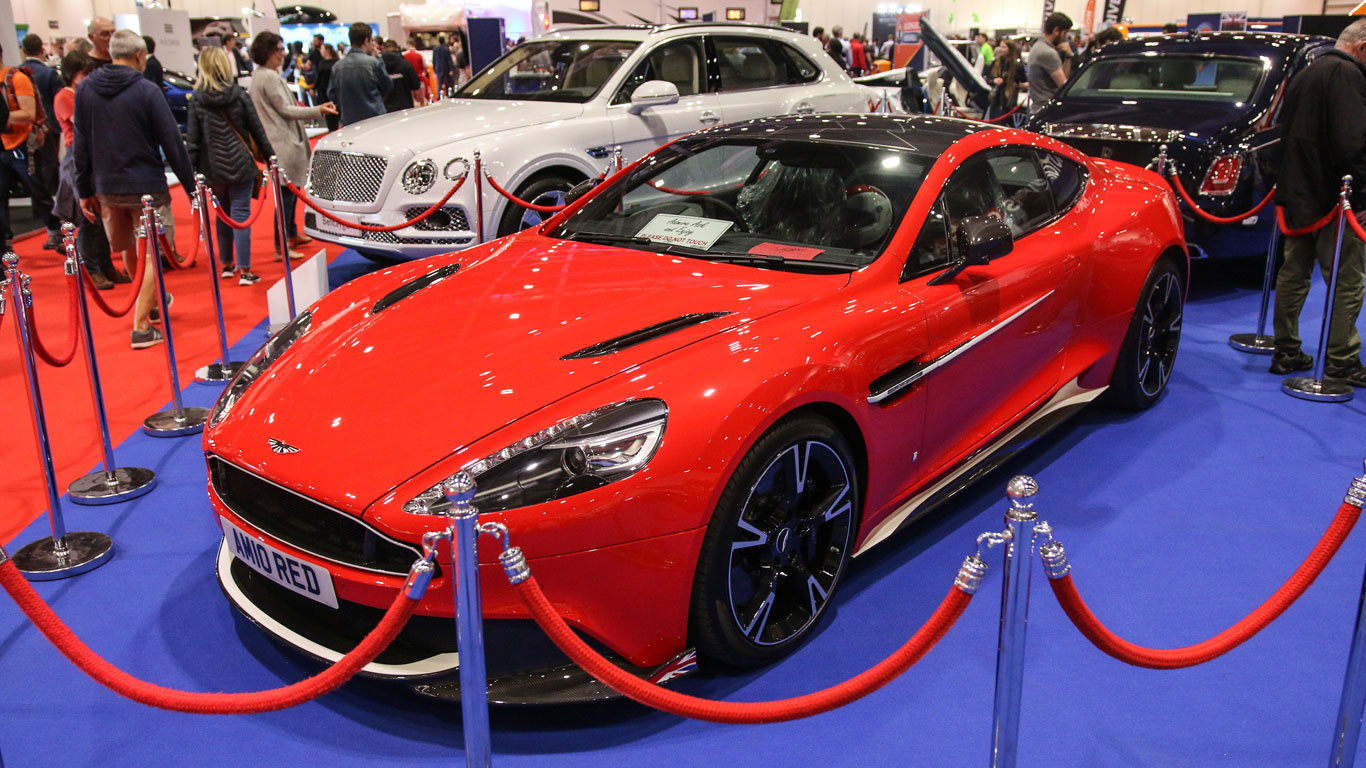 The Aston Martin Vanquish S Red10 was offered to the public in a raffle where more than 70,000 tickets were bought and over £1.5 million was raised for the RAF Benevolent Fund. It pays homage to the Royal Air Force and Red Arrows Display Team.

The car’s owner and raffle winner, Humphrey Bradley, said: “I was totally shocked to win such an incredible prize – absolutely gobsmacked. I am honoured to have supported a service charity and the RAF Benevolent Fund undertakes some truly incredible work supporting the RAF family. From those on RAF Stations to those veterans in care homes and everyone in between, they really are there for those that need help, every step of the way.”

The best motoring event… in the world 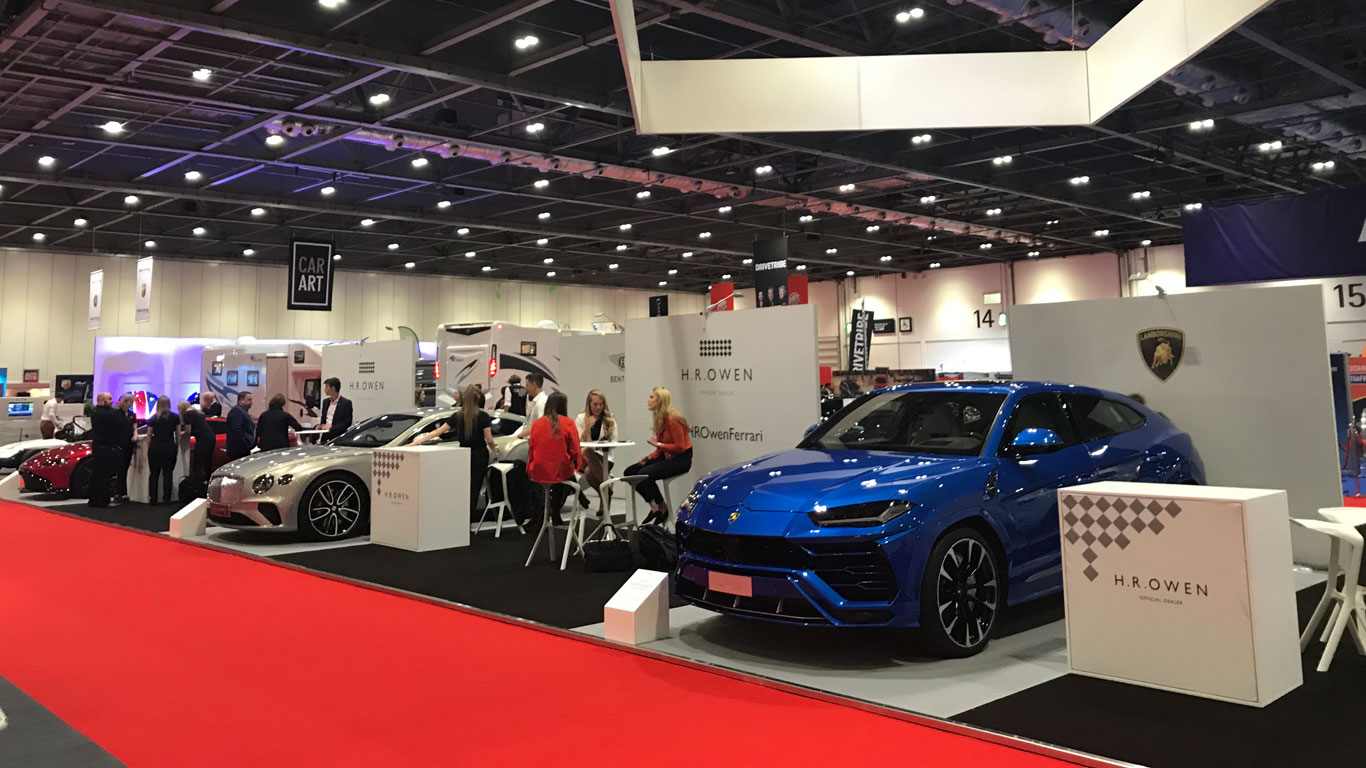 ‘Britain’s motoring event of the year’ is on now until 20 May 2018. Tickets start at £22.50 and one child (under 17) goes free with a paying adult. ExCeL is located close to London City Airport, which is far enough away from Windsor and Wembley not to be affected by the other big events happening this weekend. Keep clicking for more pics.