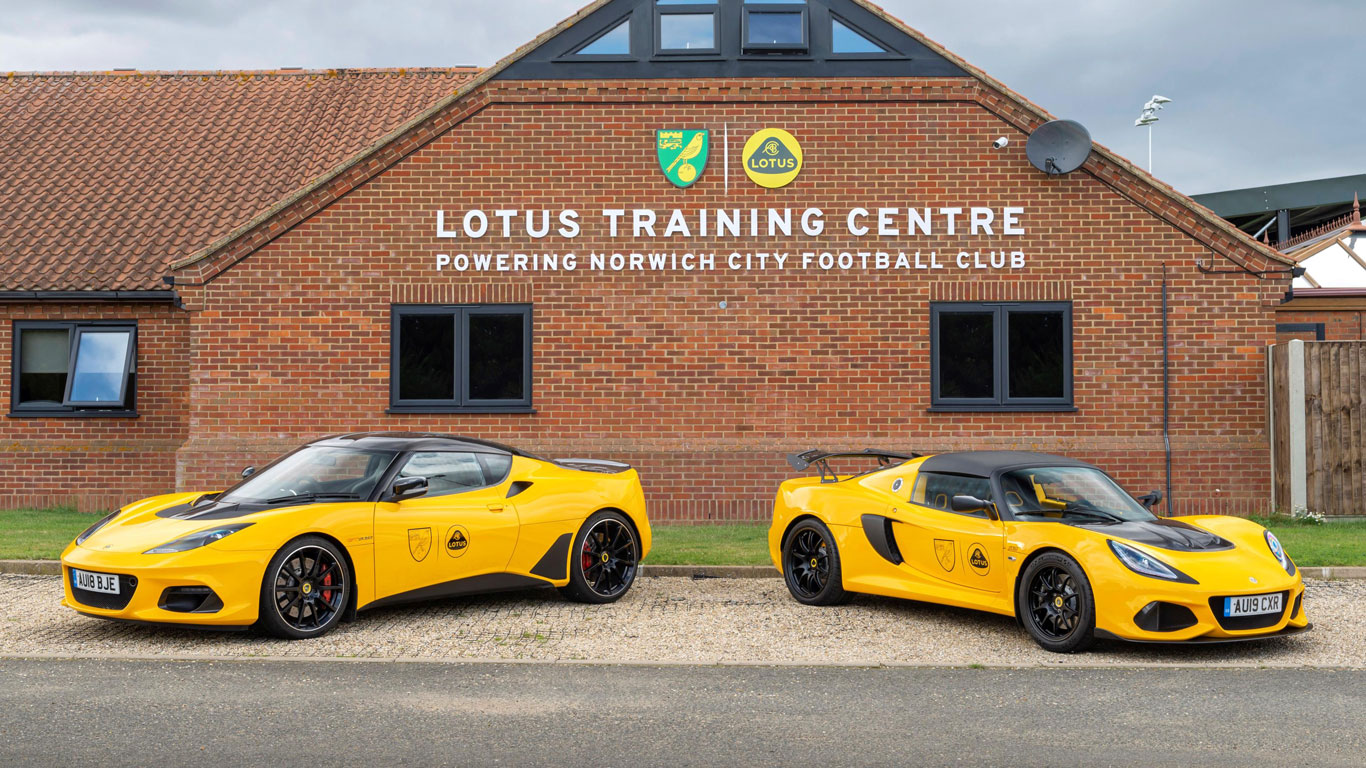 Football is back, although given the FIFA Women’s World Cup and the fact that it’s only early August, it never really went away. On the eve of the new Premier League football season, Norwich City has announced a multi-year partnership with local car company Lotus. It’s a chance for us to channel our inner Delia Smith by saying: “Football, let’s be havin’ you”. Here are some other examples of when cars play football. 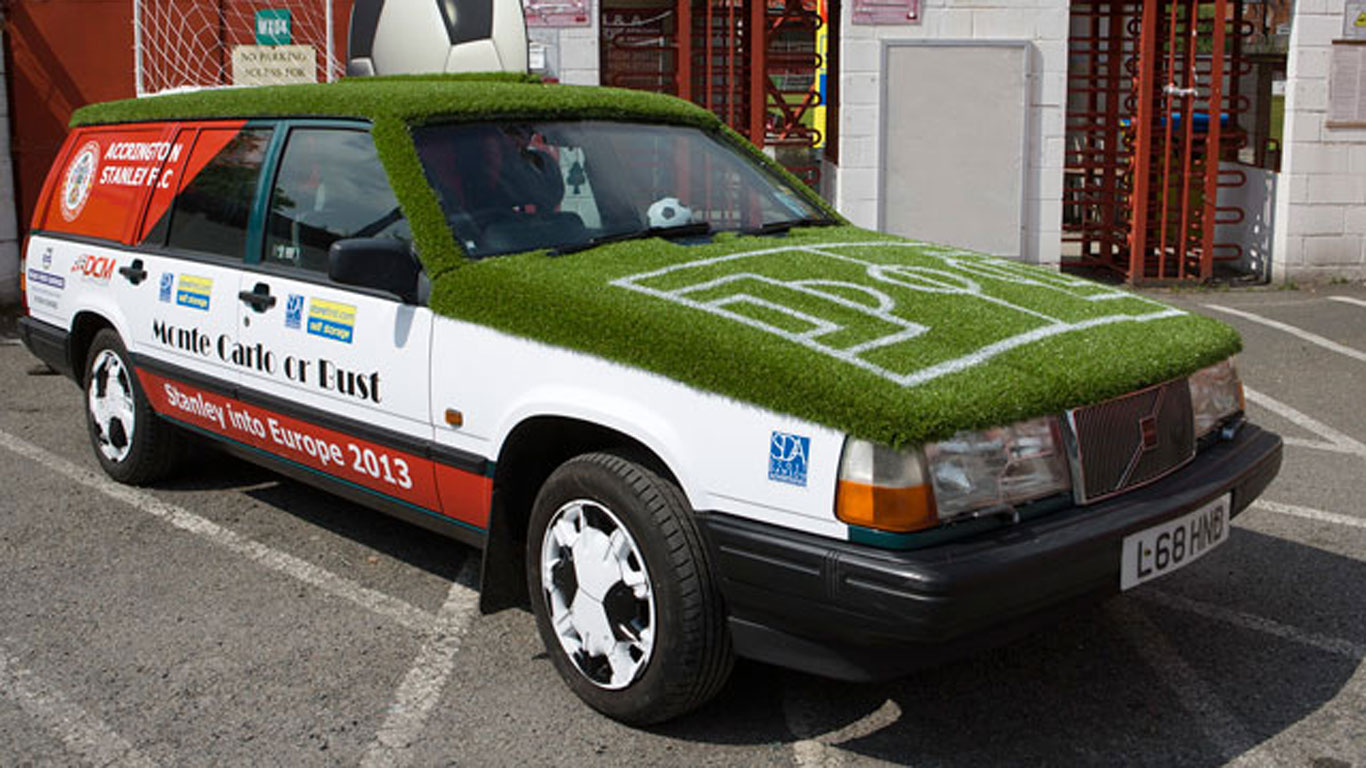 Do not adjust your set: this really is a 1993 Volvo 940 covered in an artificial football pitch. And yes, those hubcaps – which look like a tribute to the Fiat Panda Italia ’90 – are indeed styled to look like footballs. And it was all for ‘charidee’…

The Volvo 940 was purchased for the ‘Monte Carlo or Bust’ rally, with teams tasked with buying a car for £250 or less and then getting to Monaco in three days to raise money for their chosen charity. 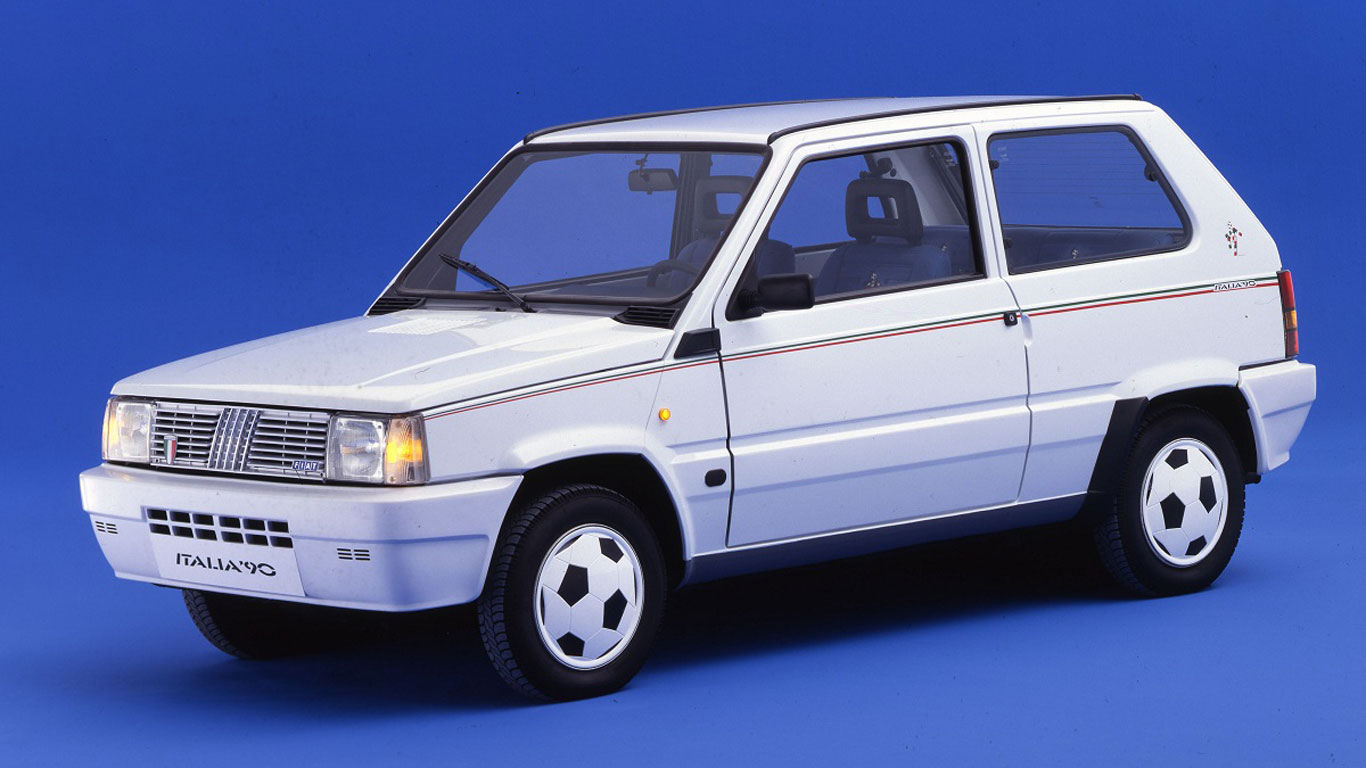 Can it really be 29 years since England were cruelly knocked out of the World Cup by West Germany? Ah, the memories: the missed penalties, Pavarotti, Gazza’s tears and the Fiat Panda Italia ’90.

In the summer of 1990 it was possible to wander down to your local Fiat dealer and drive away in a Panda Italia ’90, complete with Ciao mascot livery, baby blue seats and those football hubcaps. Oh, those football-styled hubcaps… 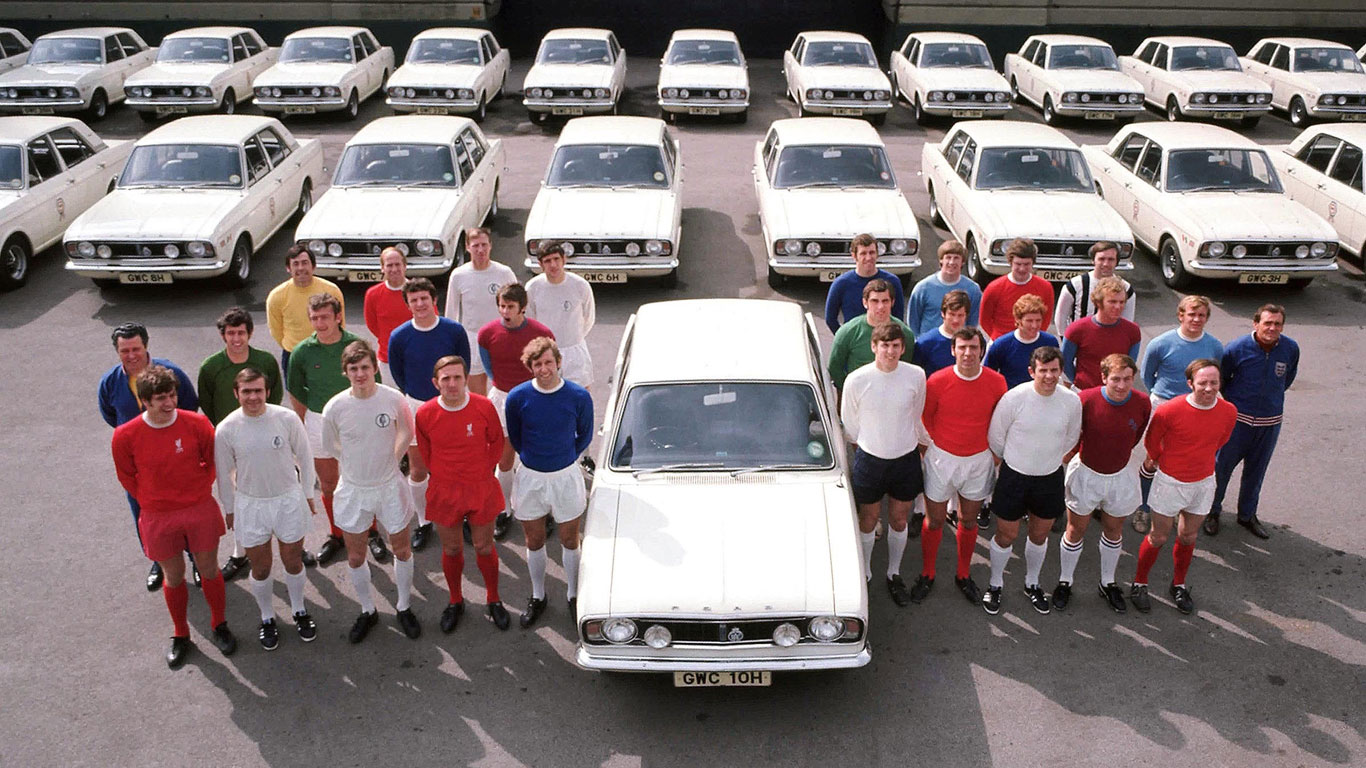 The relationship between football and cars isn’t a new thing. Back in 1970, Ford’s marketing strategy involved giving a Mk2 Cortina to every single member of the England World Cup squad.

In revenge for England’s victory four years earlier, West Germany stormed back from being two down to win 3-2 after extra time. Still, at least they had ‘dad’s favourite’ Cortina to look forward to when they got back home.

Top Gear and the Toyota Aygo 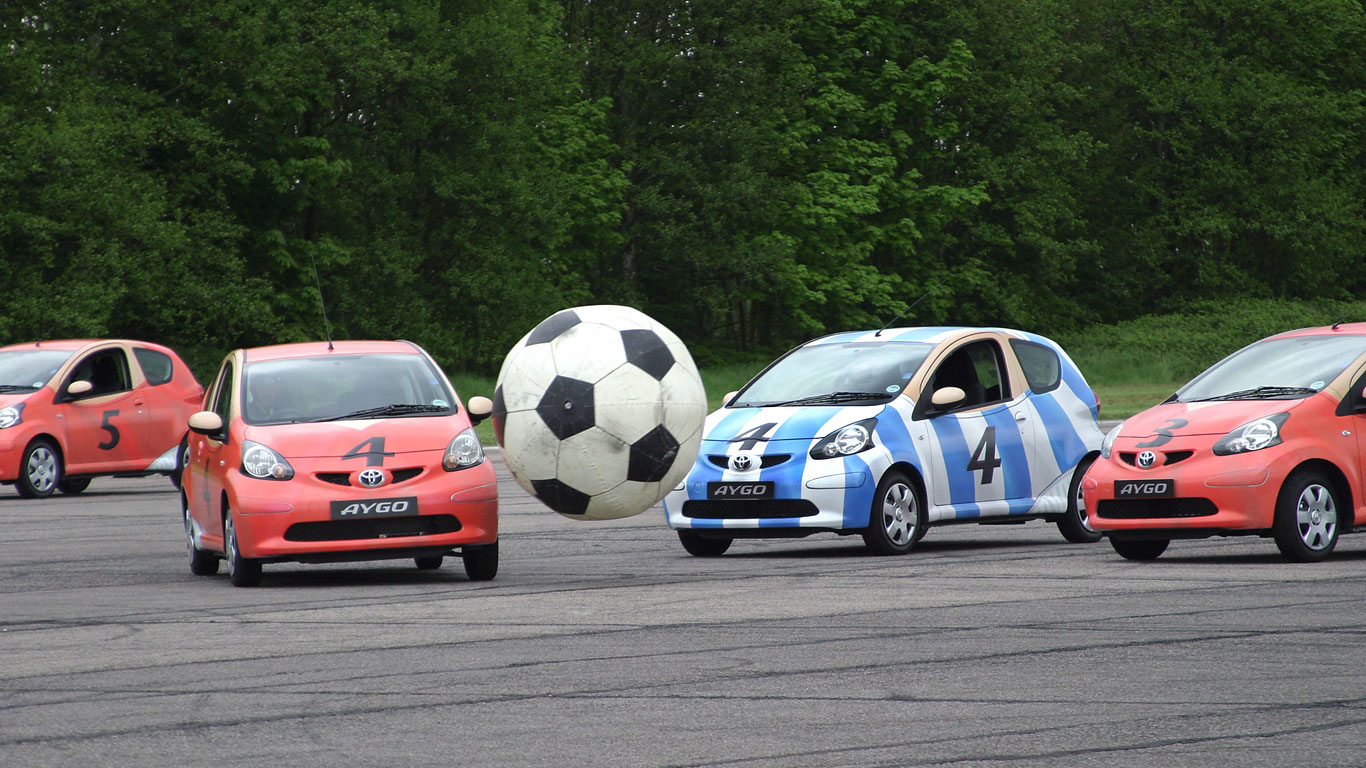 The very first episode of series six of Top Gear saw Hammond and May engaged in a game of football of a different kind.

Using a giant inflatable ball, Top Gear created Aygo Football. Two series later and the teams were back, but this time the Aygo was pitched against the Volkswagen Fox. 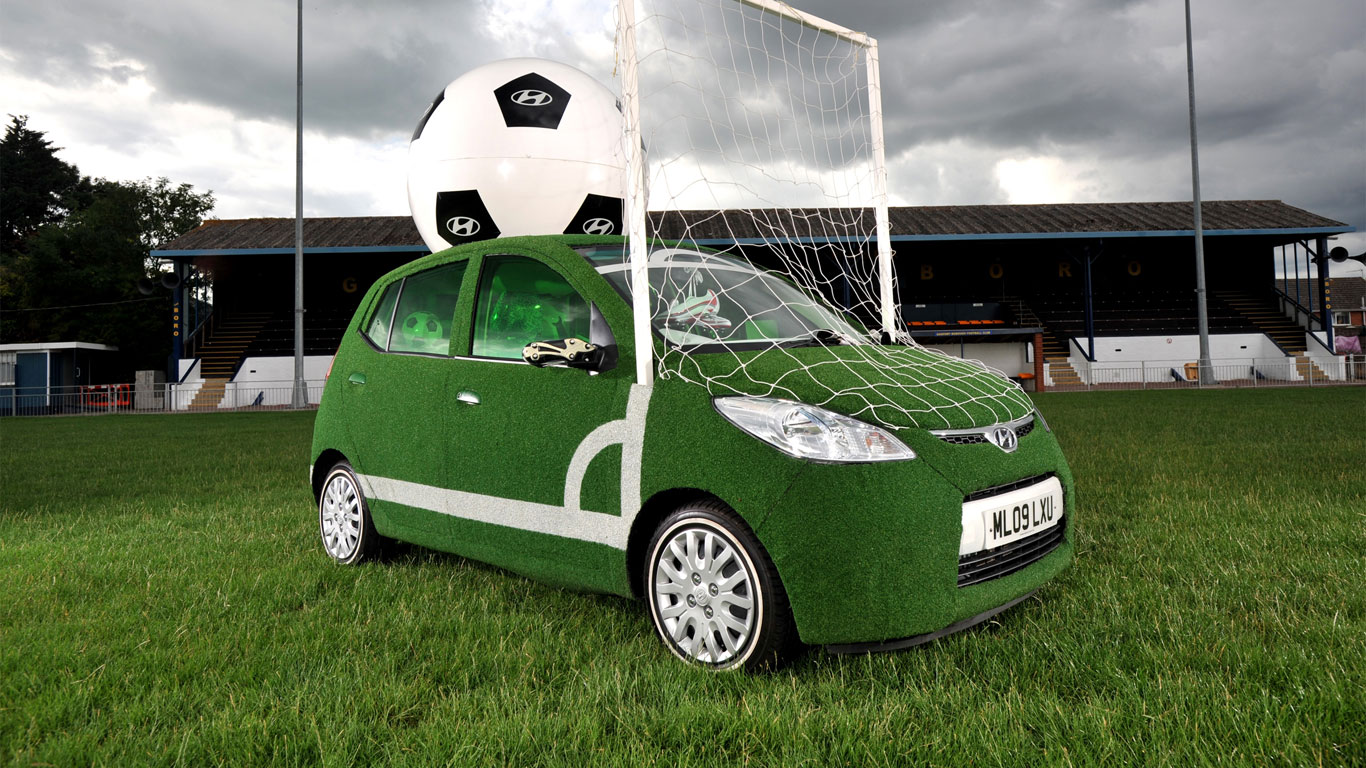 To celebrate Hyundai’s sponsorship of the 2010 World Cup, Hyundai created a pair of football cars, each one featuring ‘grass’ bodywork and interior, a giant football on the roof and goal posts fixed to the A-pillars.

One was subsequently sold off to raise money for BEN, the automotive industry charity. It sold for £5,005: about £500 less than a normal Hyundai i10. 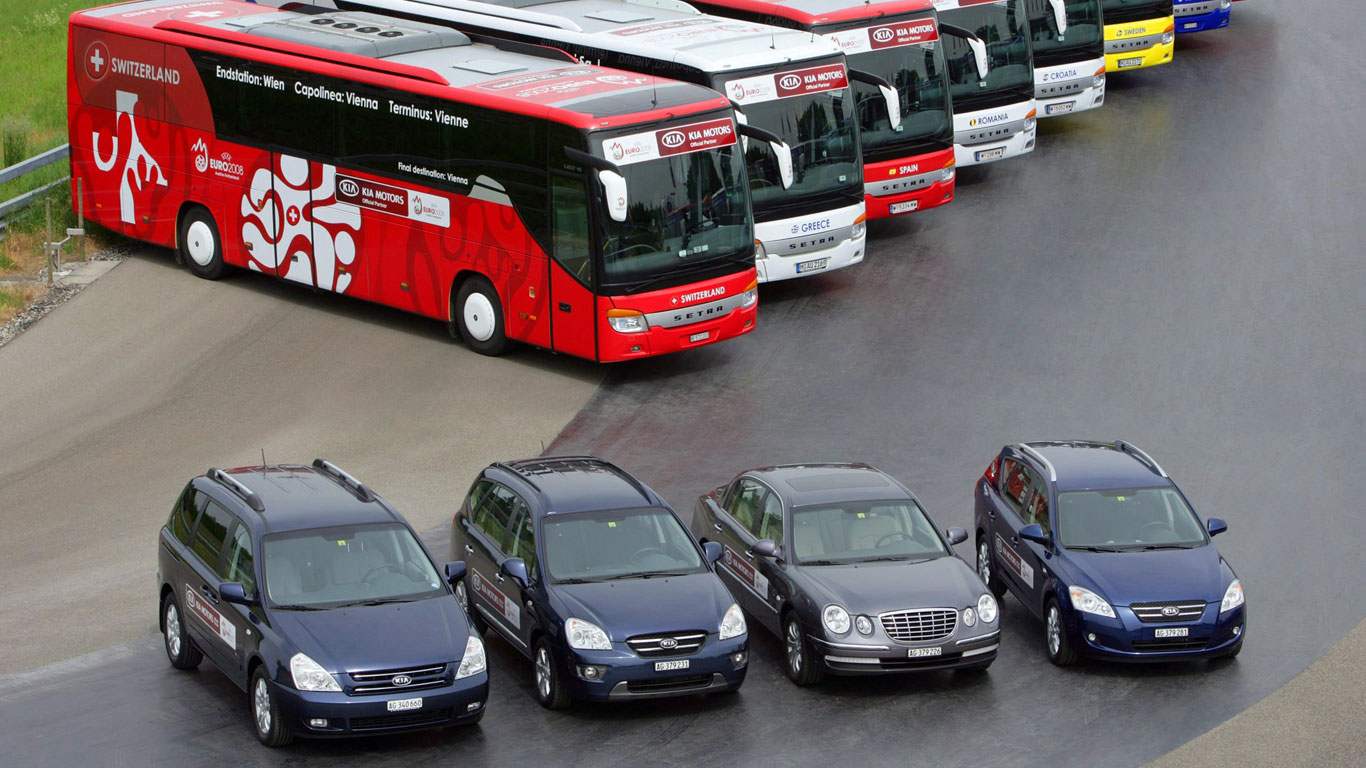 The European Championships of 2008 will perhaps be best known over here for the fact that none of the home nations actually managed to qualify for the tournament in Austria and Switzerland.

But that didn’t deter Kia from jumping on the football bandwagon with its ‘Drive for Glory’ and ‘Be Kia, Be Together’ campaigns.

Kia and the FA Cup 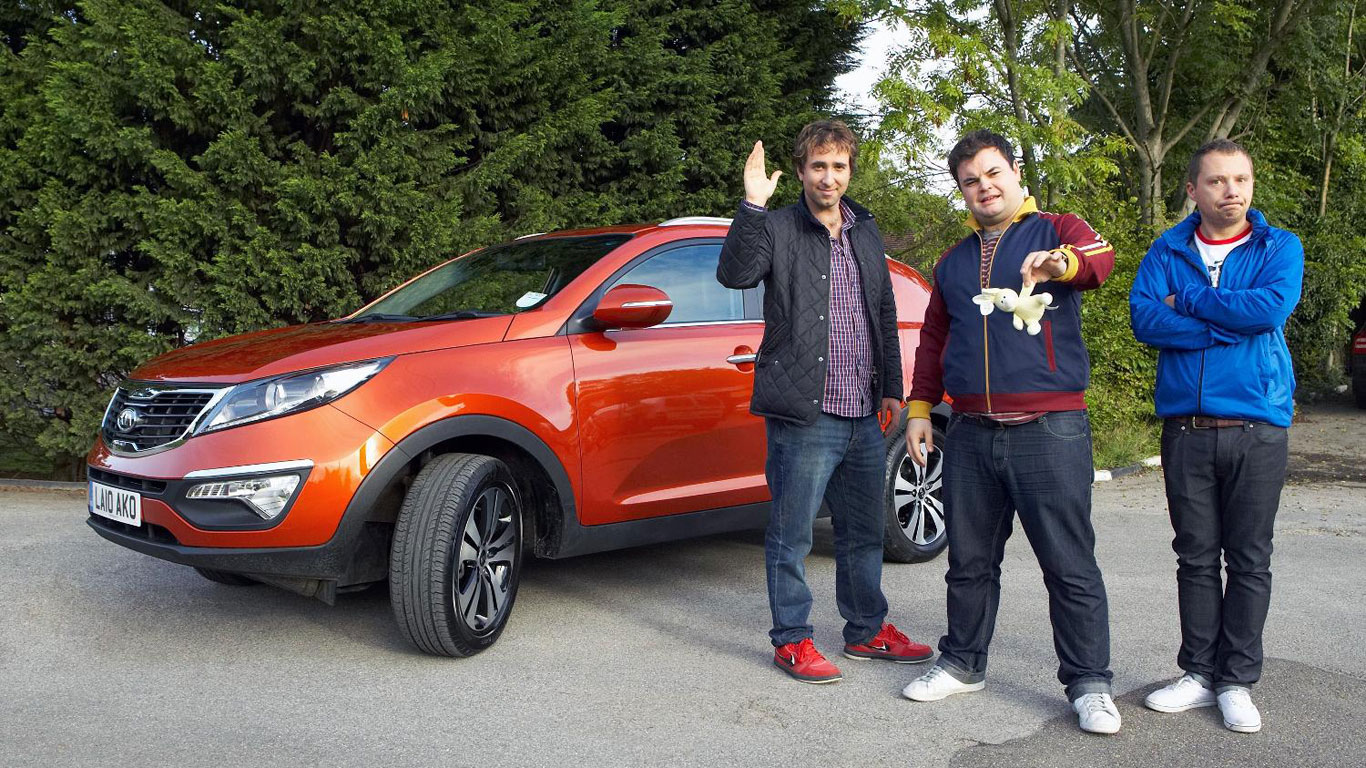 Two years later, Kia was propelled into our living rooms once again as they sponsored ITV’s coverage of the FA Cup.

Oh how we laughed with Keith, Ian and Andy as they accompanied Chelsea’s imperious march to victory at Wembley Stadium. No, not laugh, the other thing… 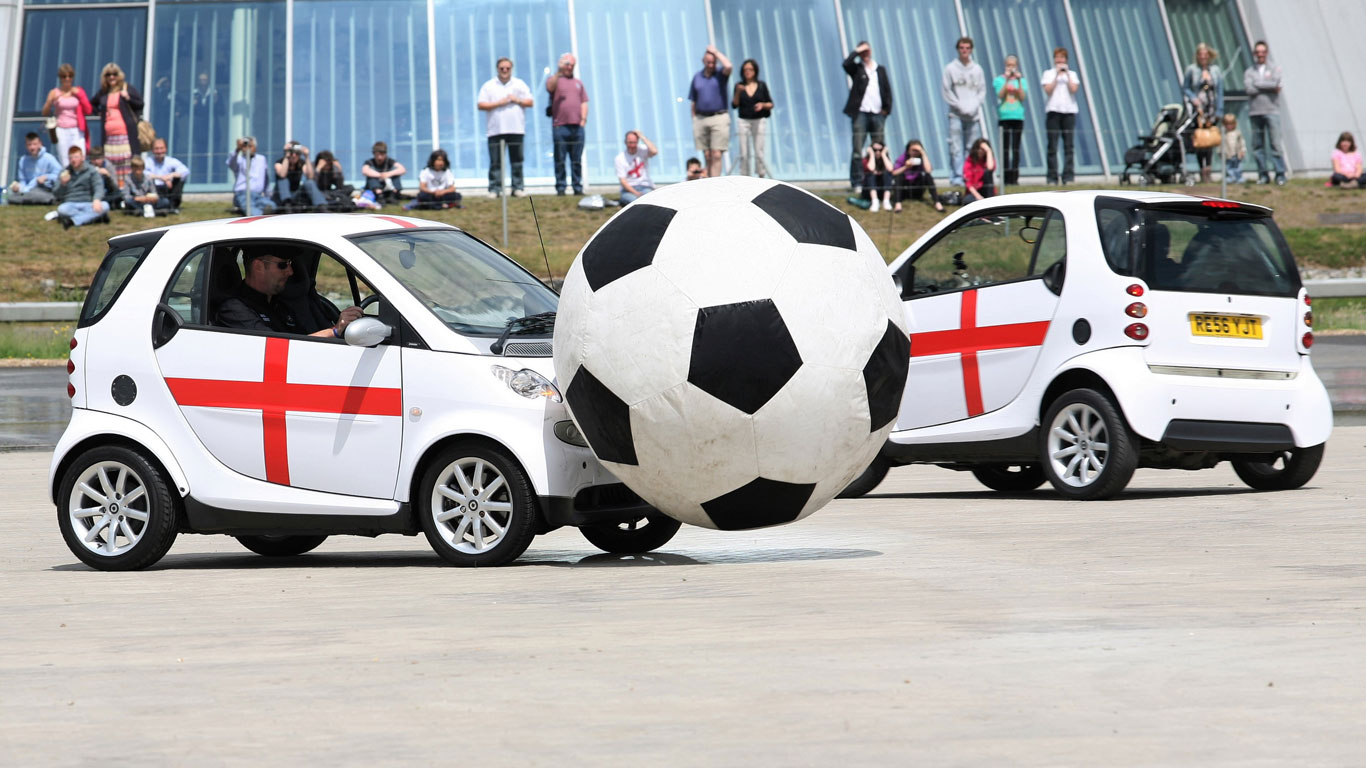 Providing the proof that you don’t need to spend millions on a glossy sponsorship deal, Smart rode the wave of football hysteria by hosting a series of games at Mercedes-Benz World, Weybridge.

It wasn’t anything like Top Gear’s Aygo Football. Not at all. 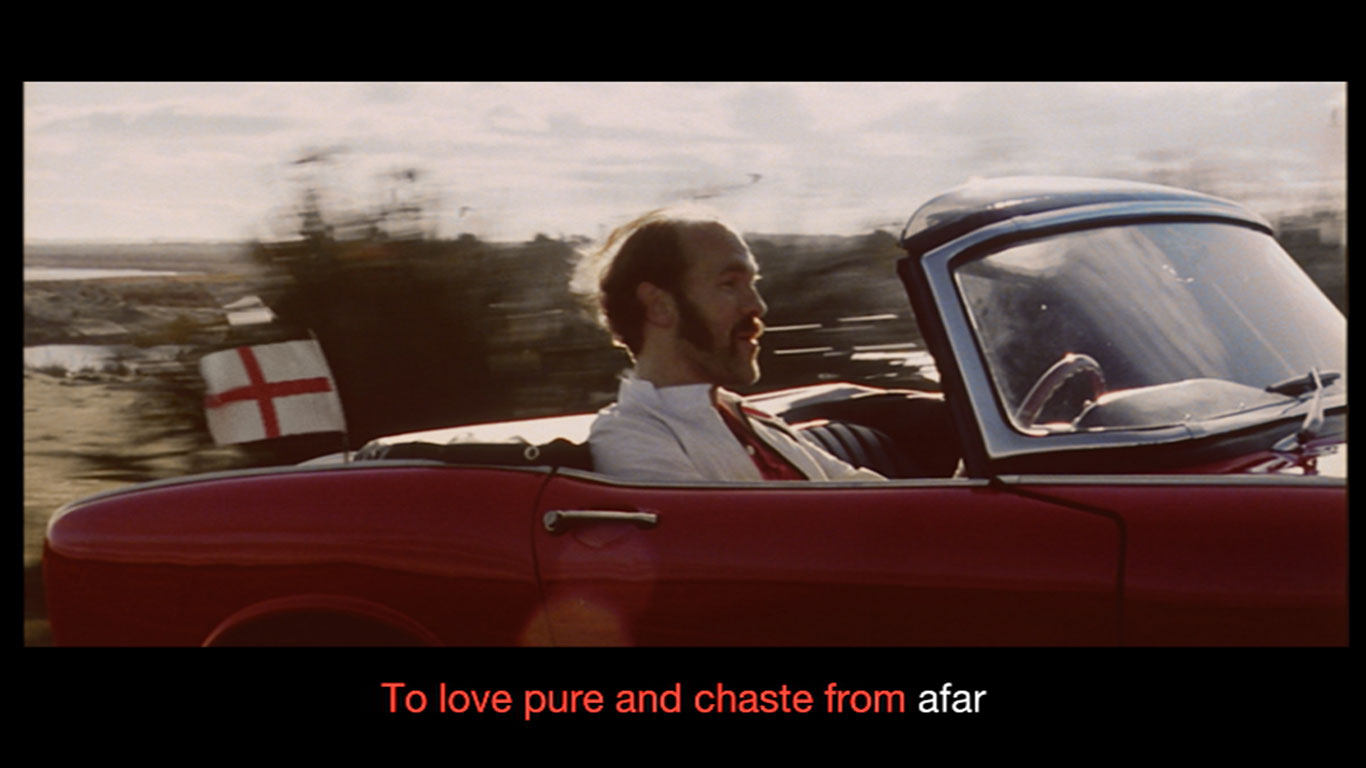 Honda’s ‘Impossible Dream’ advert is quite simply one of the greatest car ads of all time.

But in 2006, Honda and its ad agency ‘remixed’ the ad to wish England good luck at the World Cup. It was brilliantly executed. Sadly the same couldn’t be said for England’s penalties, as the team crashed out against Portugal. 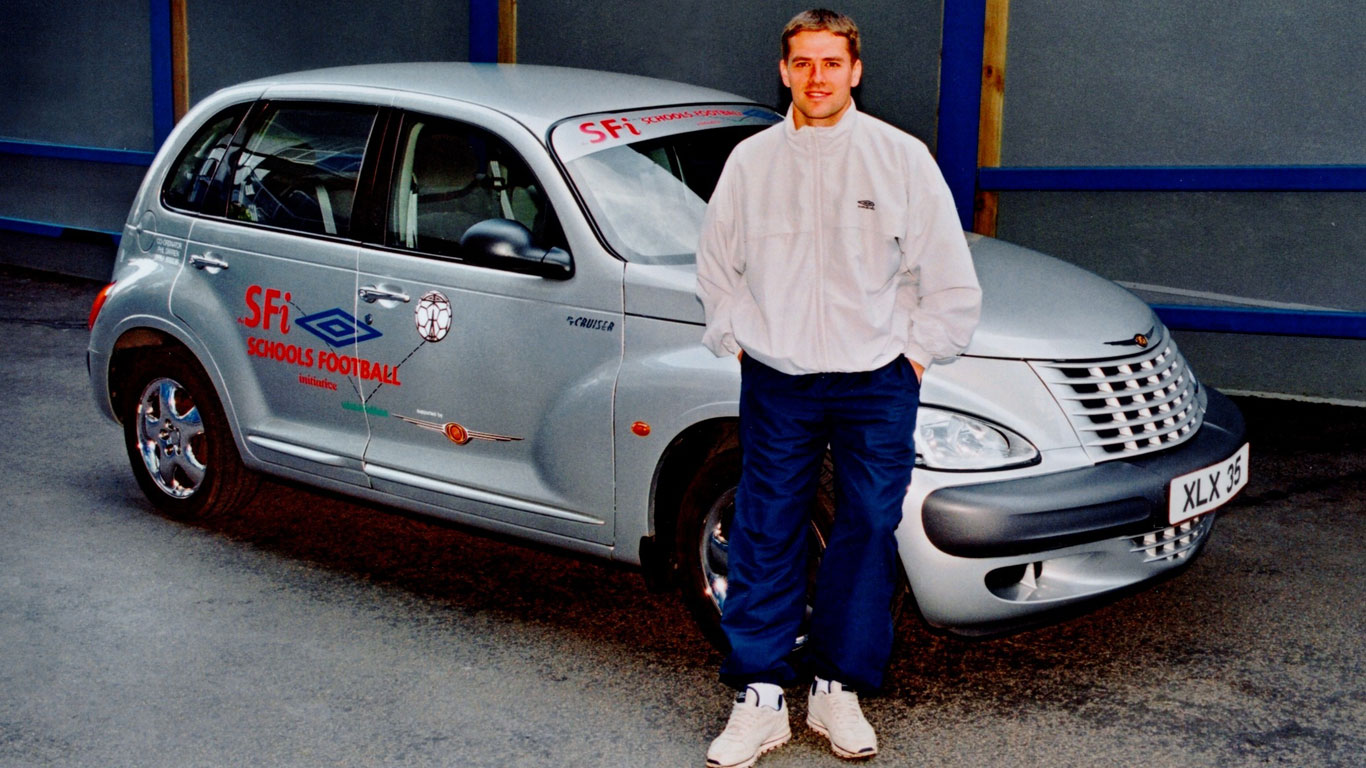 Here’s one from the archives. Look at the fresh-faced Michael Owen, then aged 22 and with the world at his feet. Still living in the glory of his wonder-goal against Argentina and adored by fans of Liverpool, where he was regularly banging in the goals.

And seemingly loving the PT Cruiser donated by Chrysler as part of its backing of the Umbro Schools Football initiative. Nobody has ever looked this happy with a PT Cruiser.

Vauxhall and the home nations 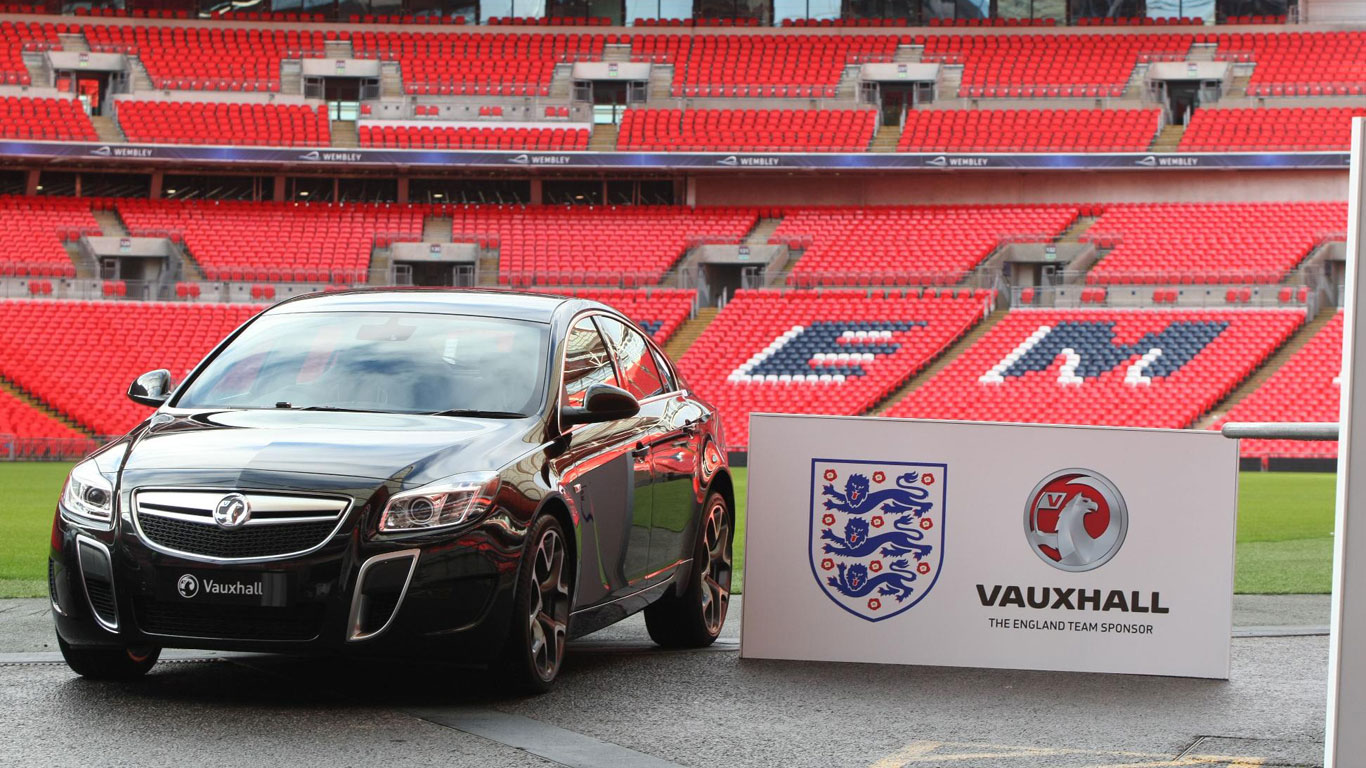 Clearly acknowledging that it would be difficult to ‘support’ one national football squad, Vauxhall decided to sponsor all four of the home nations’ teams.

It didn’t bring the nations any luck, but Wales did a mighty fine job at Euro 2016. 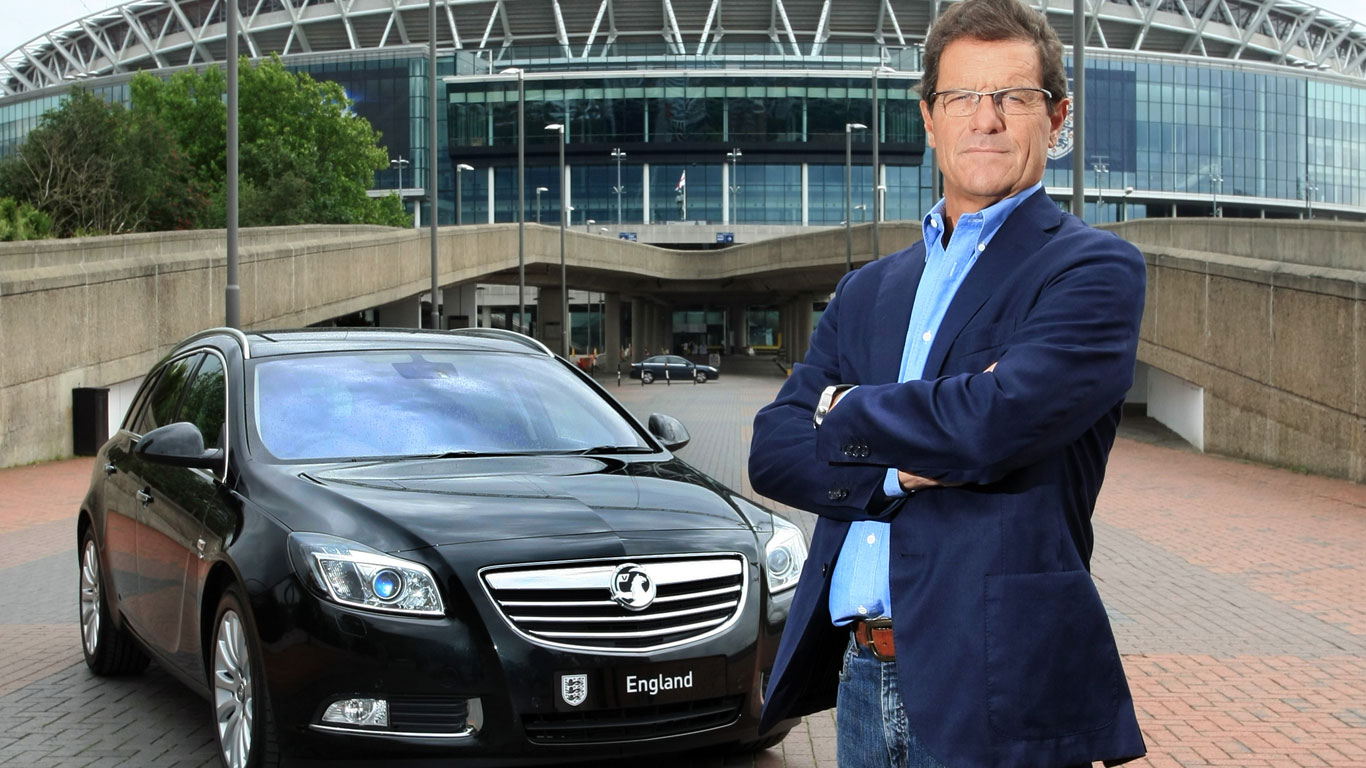 As part of Vauxhall’s sponsorship of the English FA, the then manager, Fabio Capello was given a Vauxhall Insignia Sports Tourer in 2011.

Less than a year later, he had resigned. At which point Vauxhall probably asked for its Insignia back. Still, Fabio’s loss is another man’s gain… 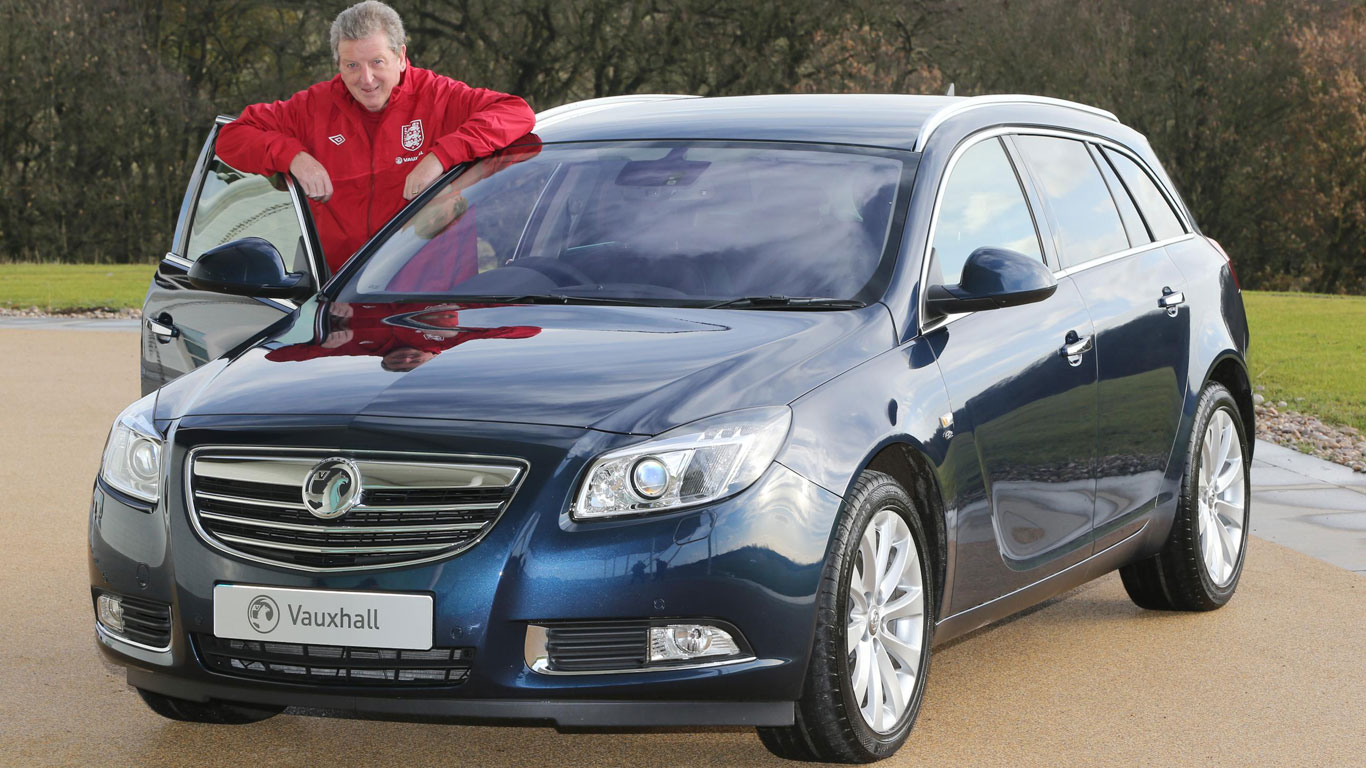 With Fabio gone, it was left to Roy Hodgson to collect the keys to England’s future and a new Vauxhall Insignia Sports Tourer.

The wagon is ideal for collecting groceries at the supermarket, but ultimately Roy was undone by Iceland. 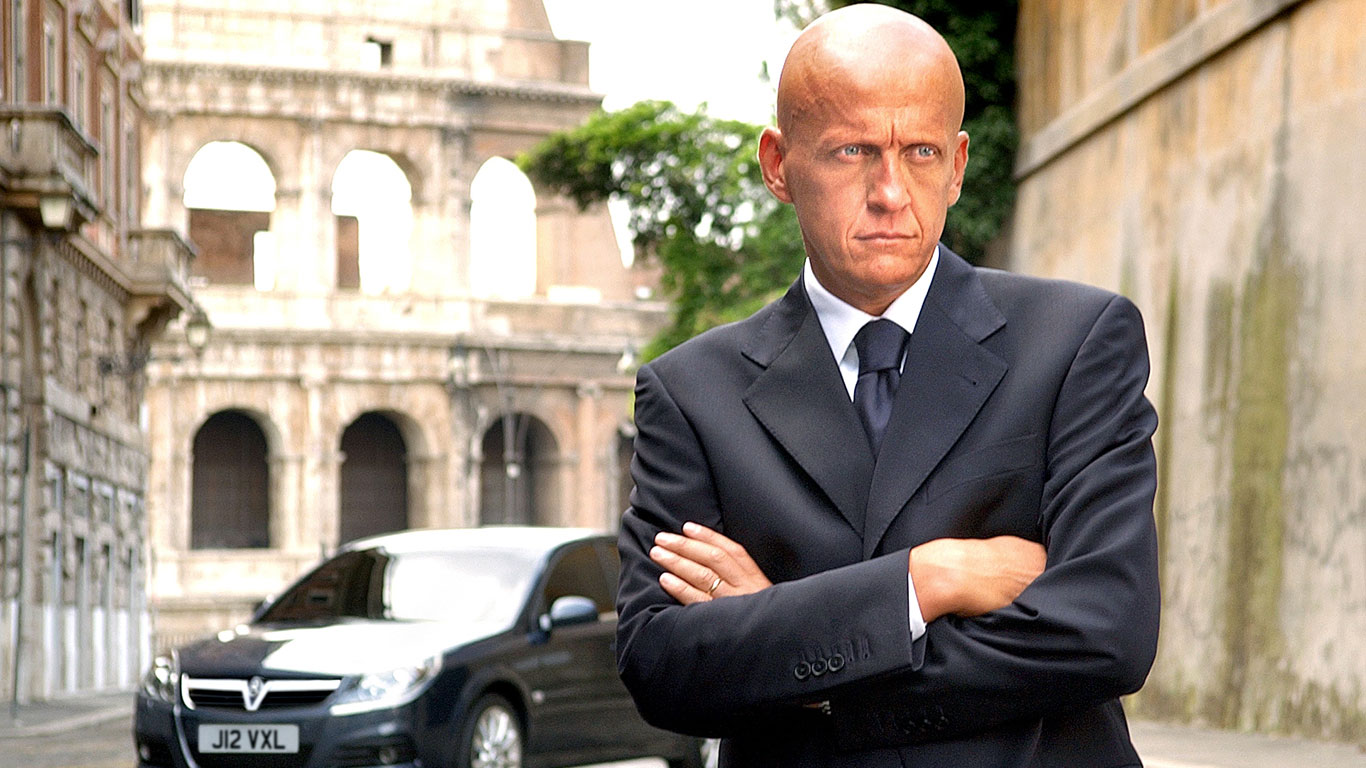 Back in 2005, Vauxhall-Opel called upon the world’s most famous referee, Pierluigi Collina to star in its ‘Take Control’ ad campaign.

The campaign – which featured a Signum and Vectra – led to Collina’s resignation, after it prompted conflict-of-interest allegations due to Opel’s sponsorship of AC Milan. 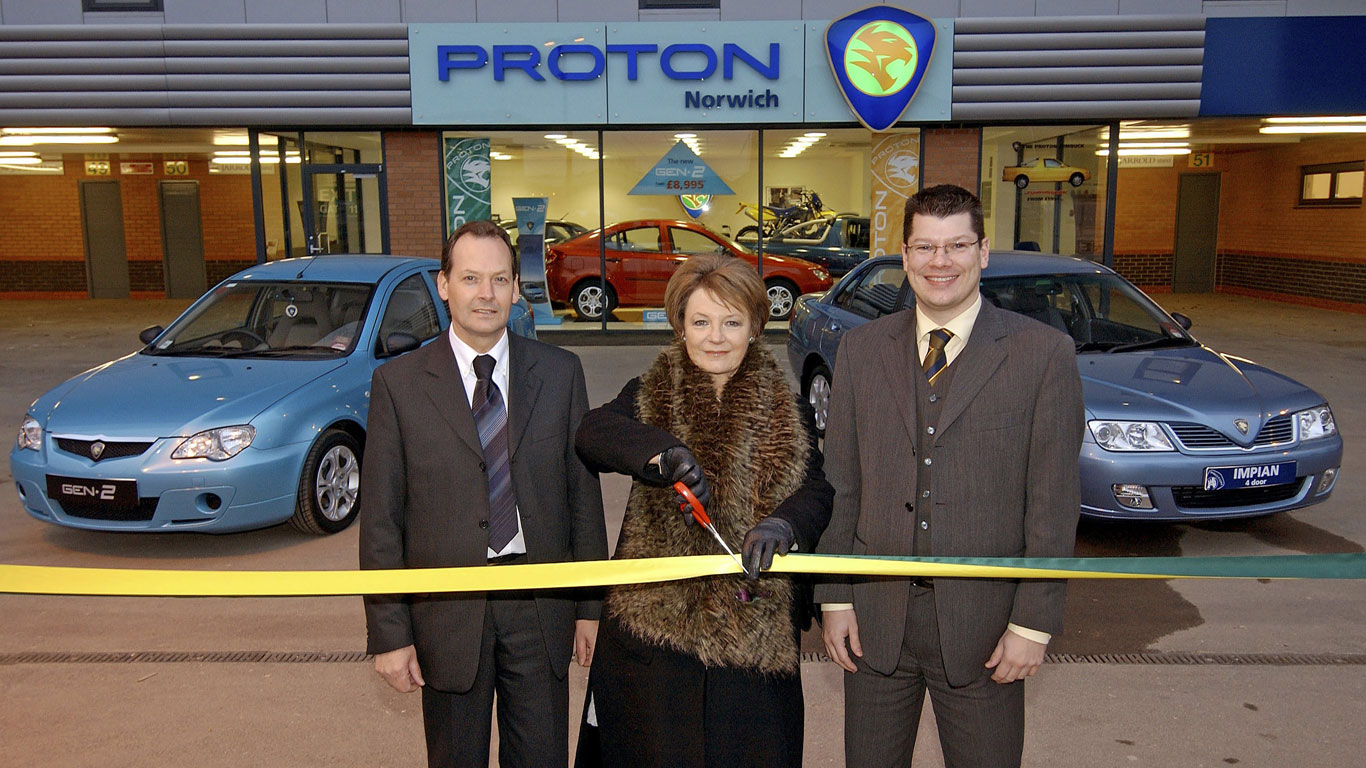 Here’s a Norwich City partnership from earlier. Proton’s ownership of Lotus led to the brands’ sponsorship of Norwich City, a club based just a few miles from the Lotus factory in Norfolk.

Delia’s restaurant was joined by the unexpected arrival of a Proton dealership situated within the Carrow Road stadium. Turn up to watch football and drive home in a car. Simple. 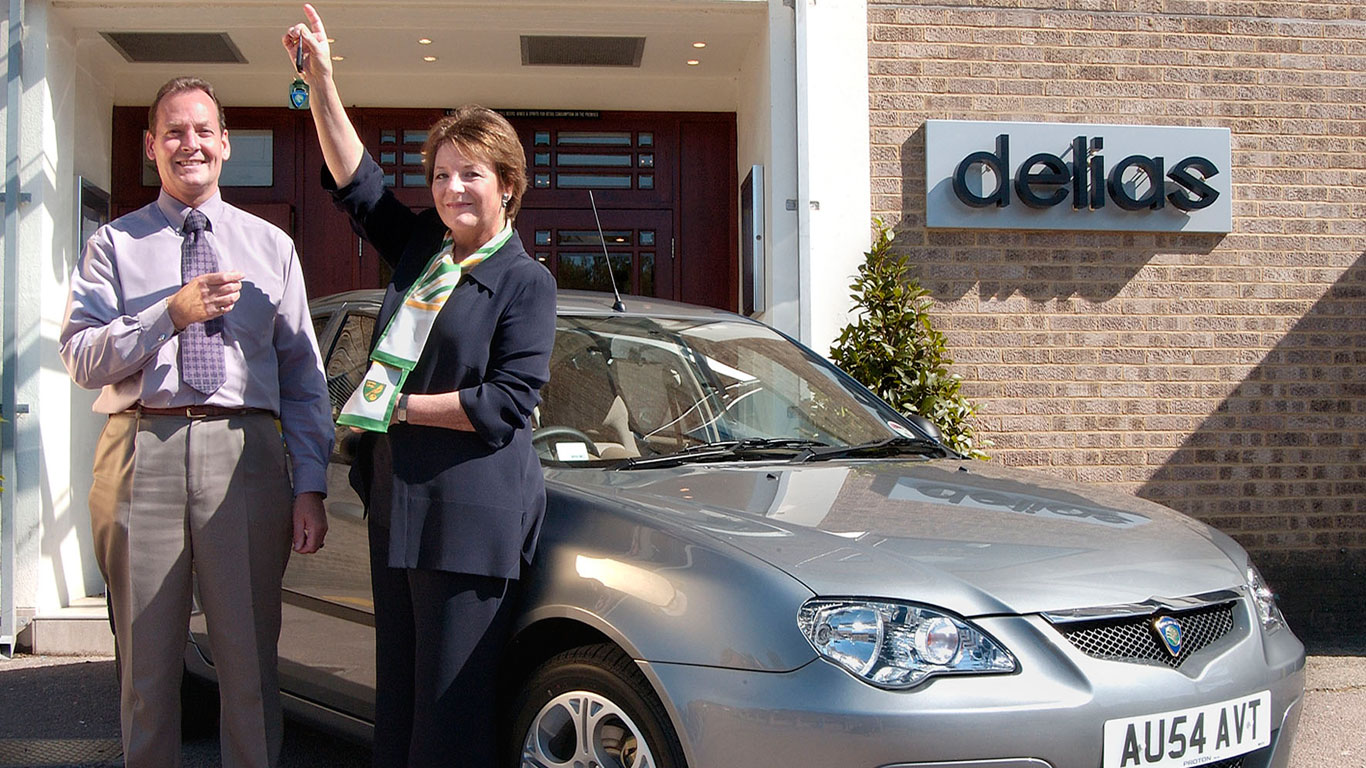 Delia’s looks thrilled to be holding the keys to the Proton GEN-2. Meanwhile, Proton UK’s MD is simply delighted to have ‘sold’ another car. 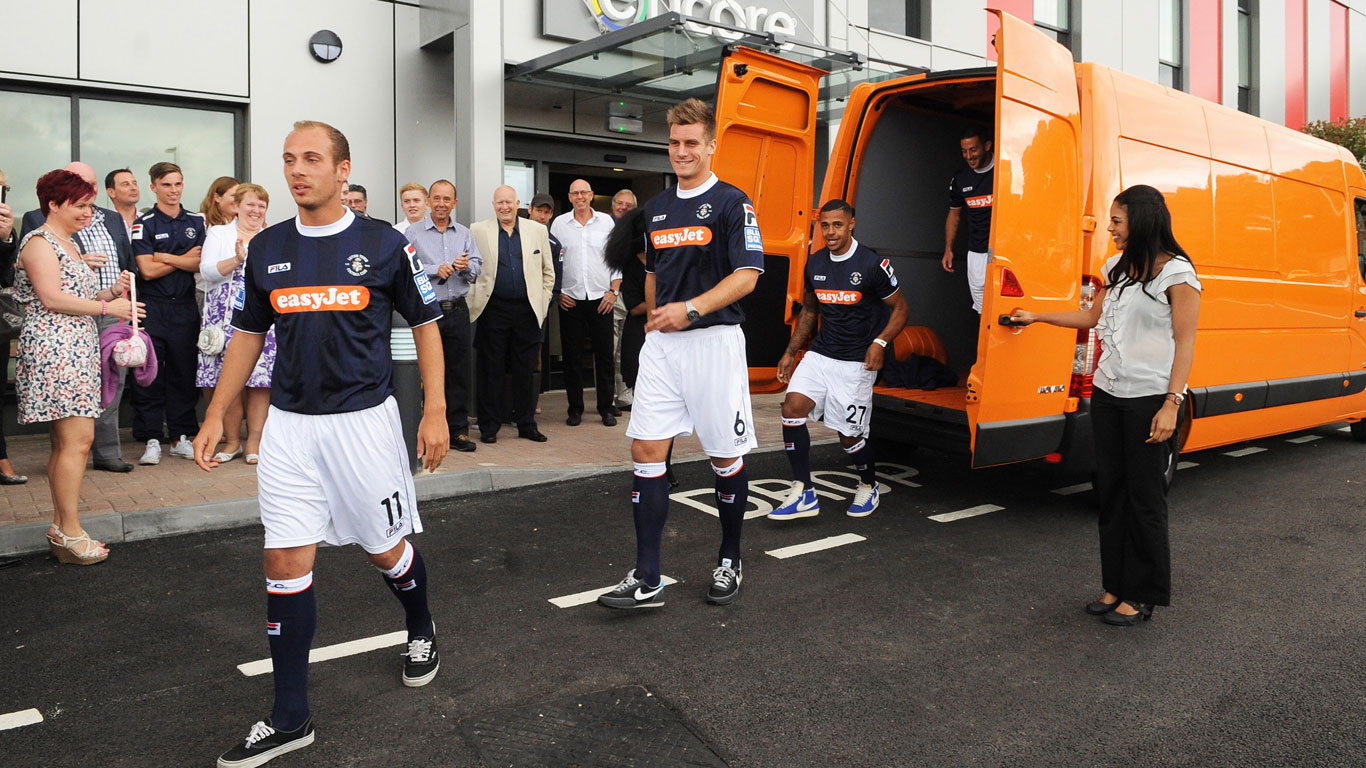 Never a firm to miss an opportunity to do something football related, Vauxhall provided a Movano van to local club, Luton Town.

It acted as a temporary changing room as The Hatters’ players strode out of the back of the van resplendent in their new away strip. You stay classy, Luton. 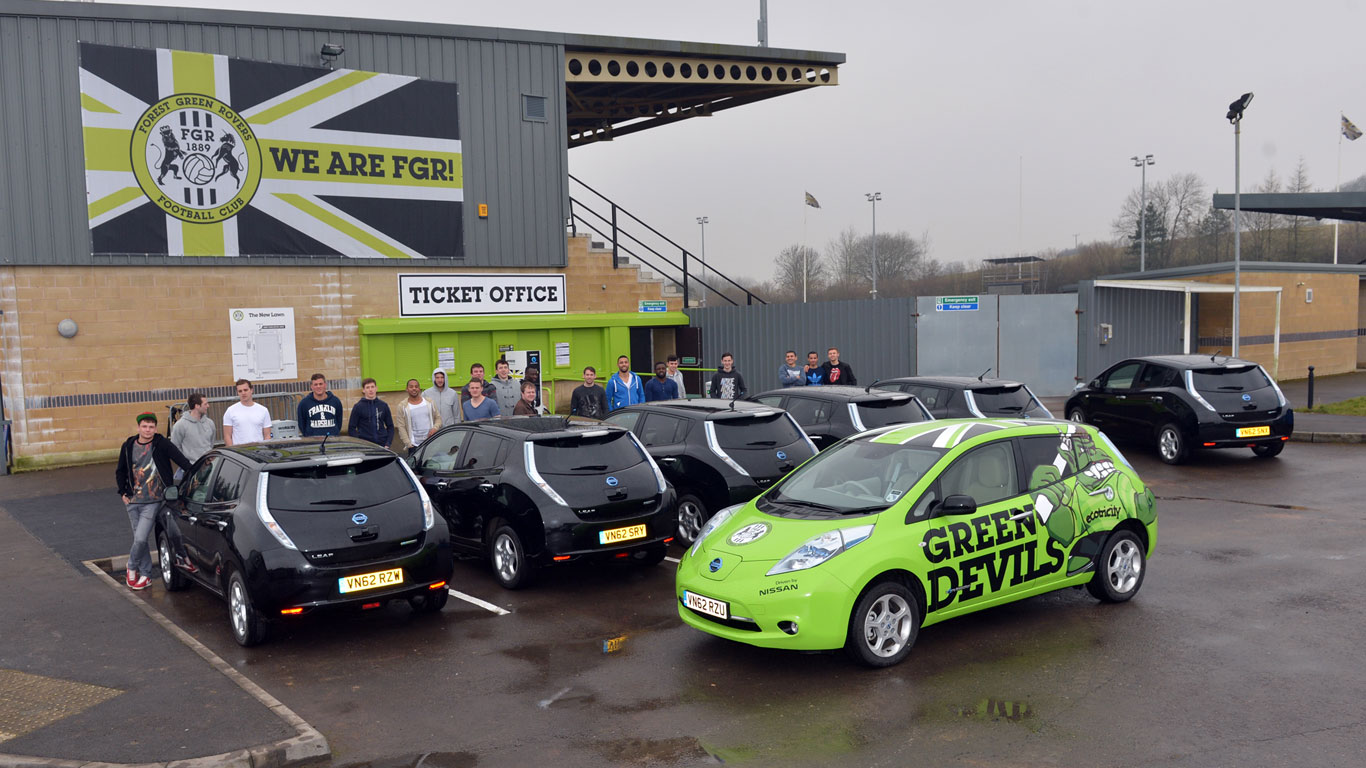 So it was no surprise when the club took delivery of 11 all-electric Nissan Leafs. In 2015, the club added a Mitsubishi Outlander PHEV to the fleet.

Skoda and the Football League 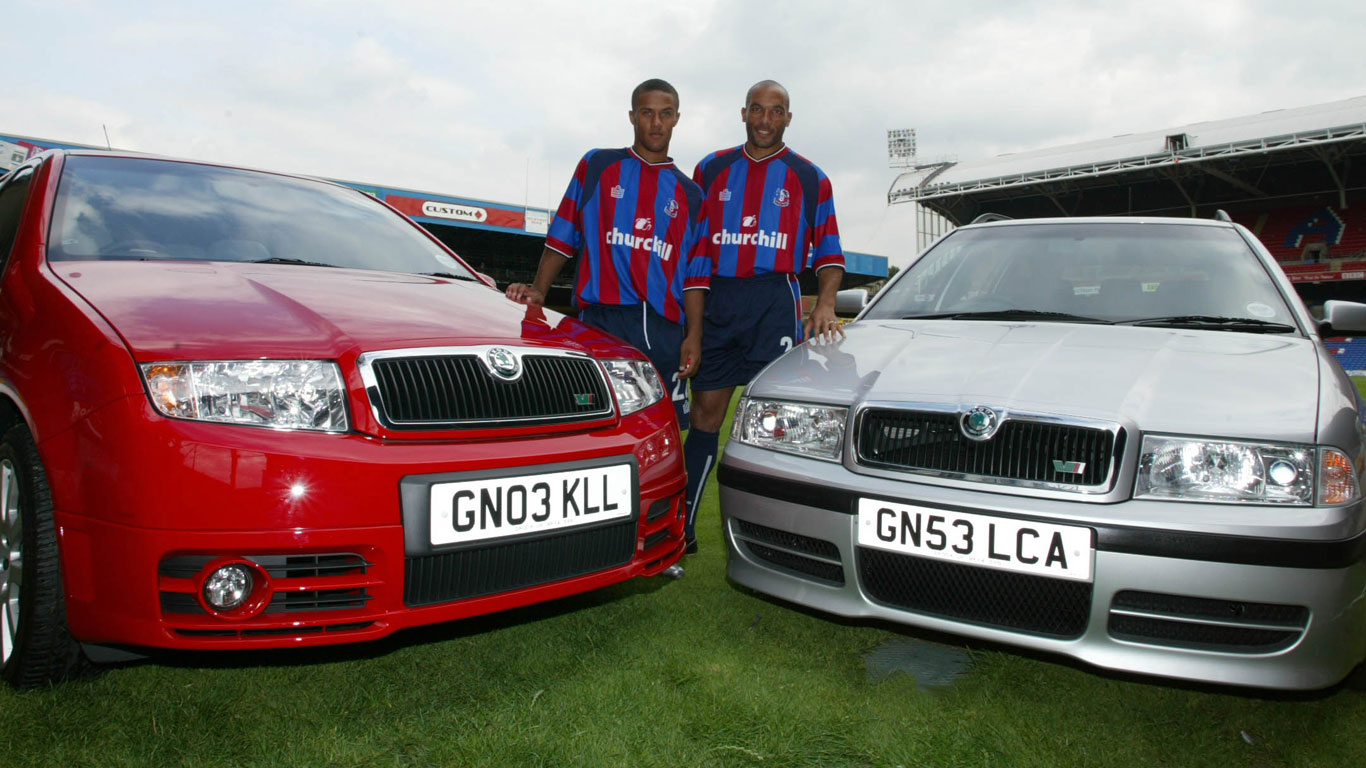 How old does this photo look? But then it would do, as it was taken back in September 2003 when Skoda became the official car company of the Football League.

Today, much like Crystal Palace featured in the photo, Skoda is positioned well within the premier league of its respective field. 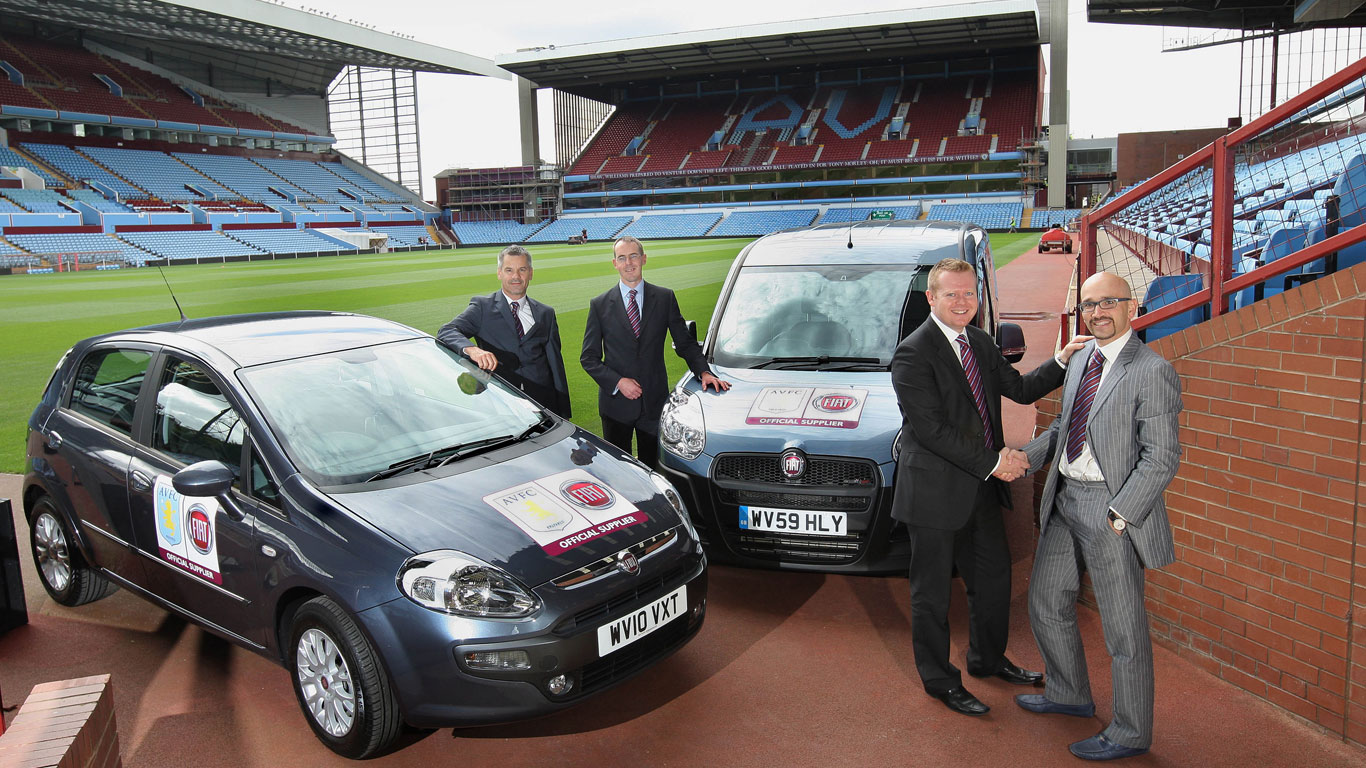 Back in 2010, Fiat signed a fleet deal with Aston Villa, promising that it was to be an ‘Aston Thriller’. Yes, they really went there. 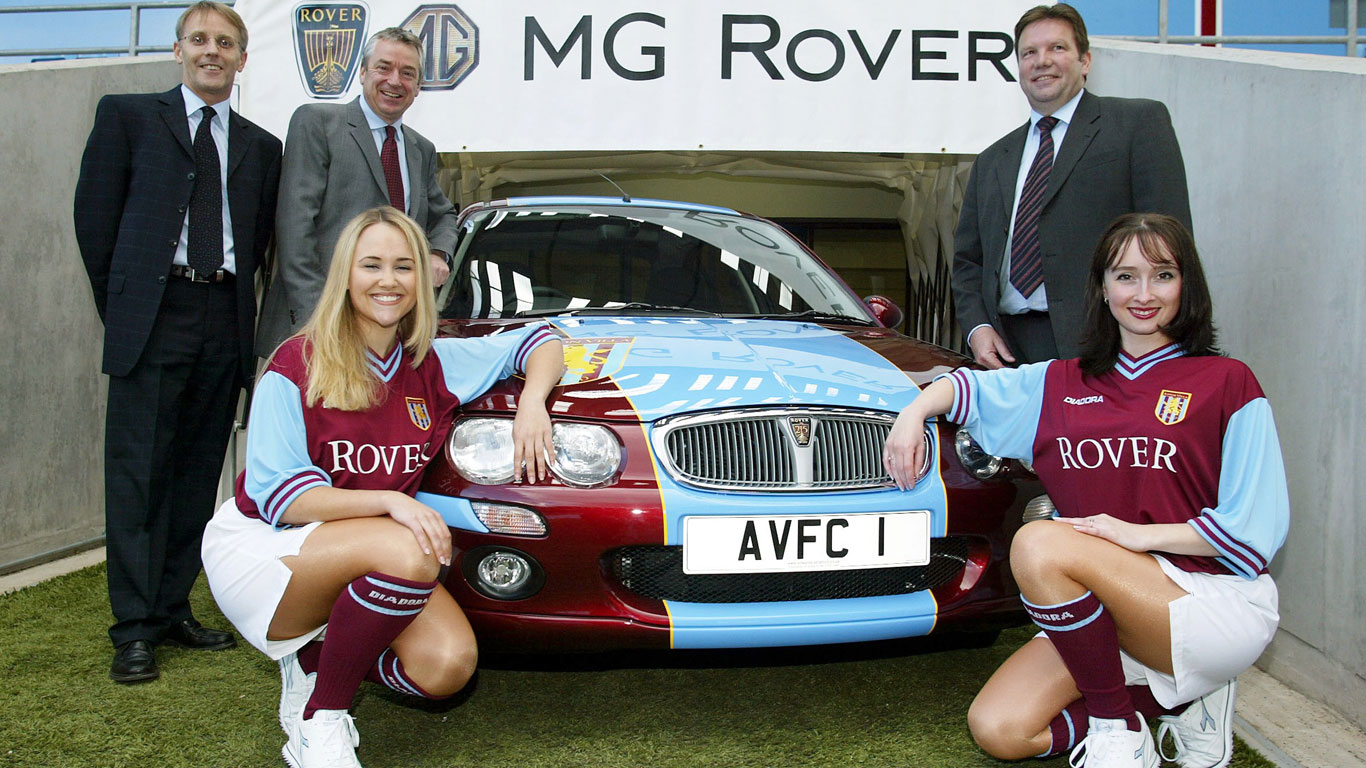 We have no idea what happened to the car, but there’s no truth in the rumour that some lads in blue football shirts were seen pushing it into a nearby canal. 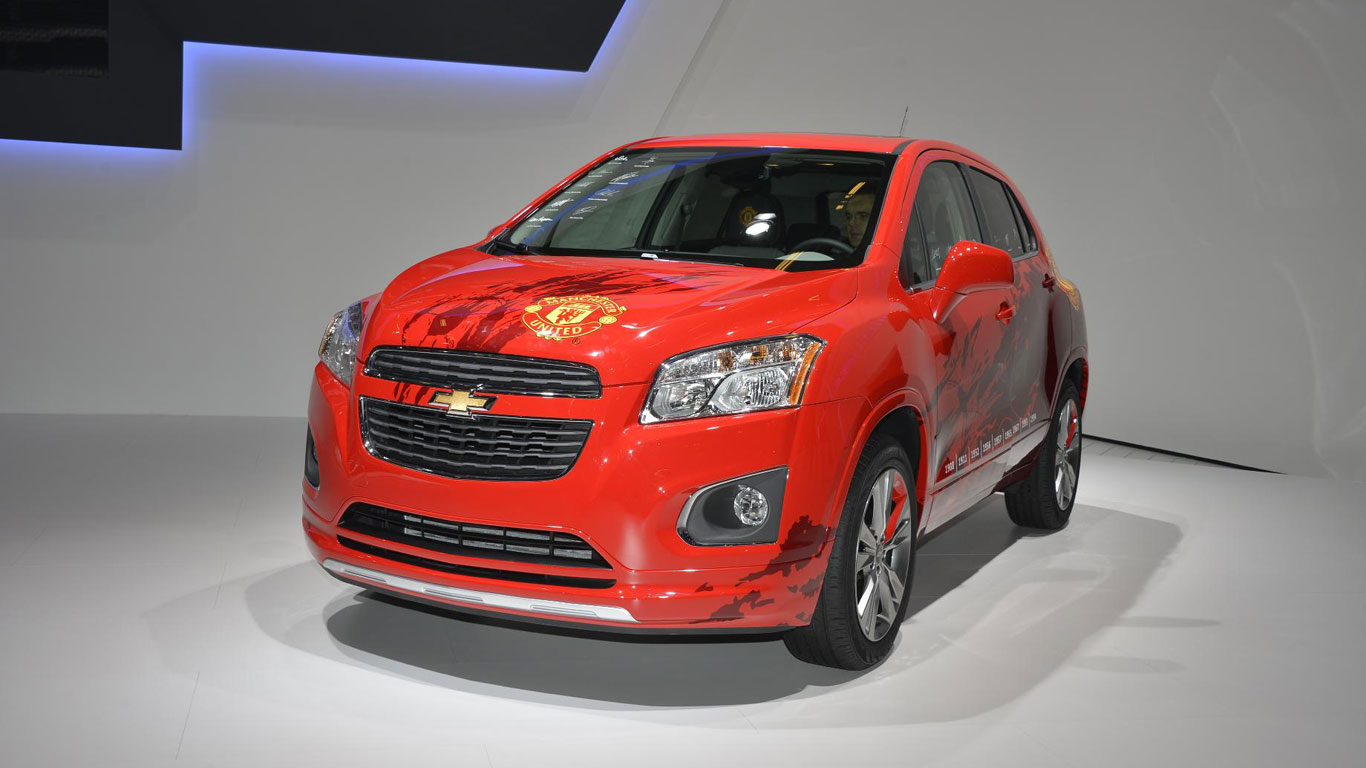 Chevrolet’s sponsorship of Manchester United is well publicised. In 2012, the firm signed a seven-year deal worth £25 million per season.

At the 2012 Paris Motor Show, Chevrolet proudly displayed this Manchester United liveried Trax. Not the ideal car, we suspect, to drive to Liverpool on a Saturday night. 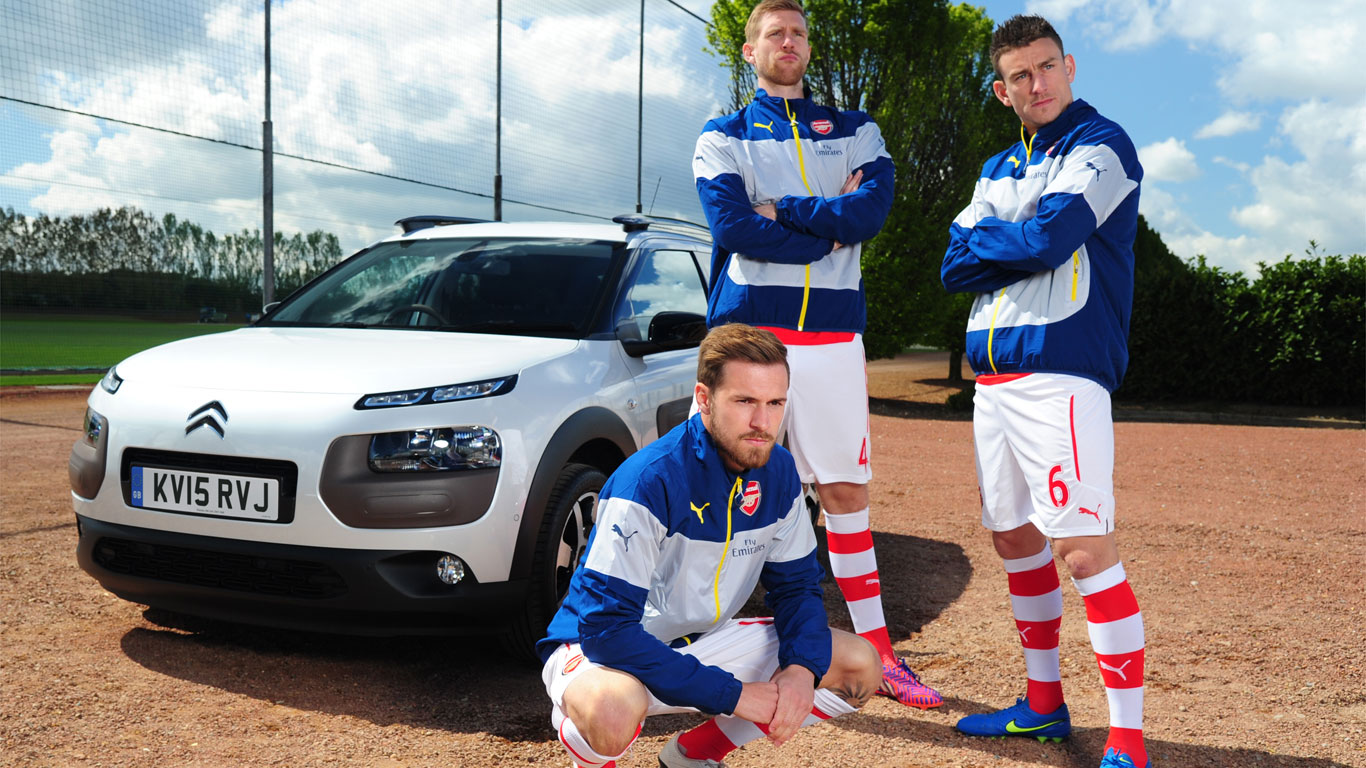 Citroen has been associated with Arsenal since 2008, with the company seemingly hell-bent on punishing the players with a series of embarrassing stunts and activities. Here we find Per Mertesacker, Laurent Koscielny and Aaron Ramsey perfecting their clothing catalogue poses. 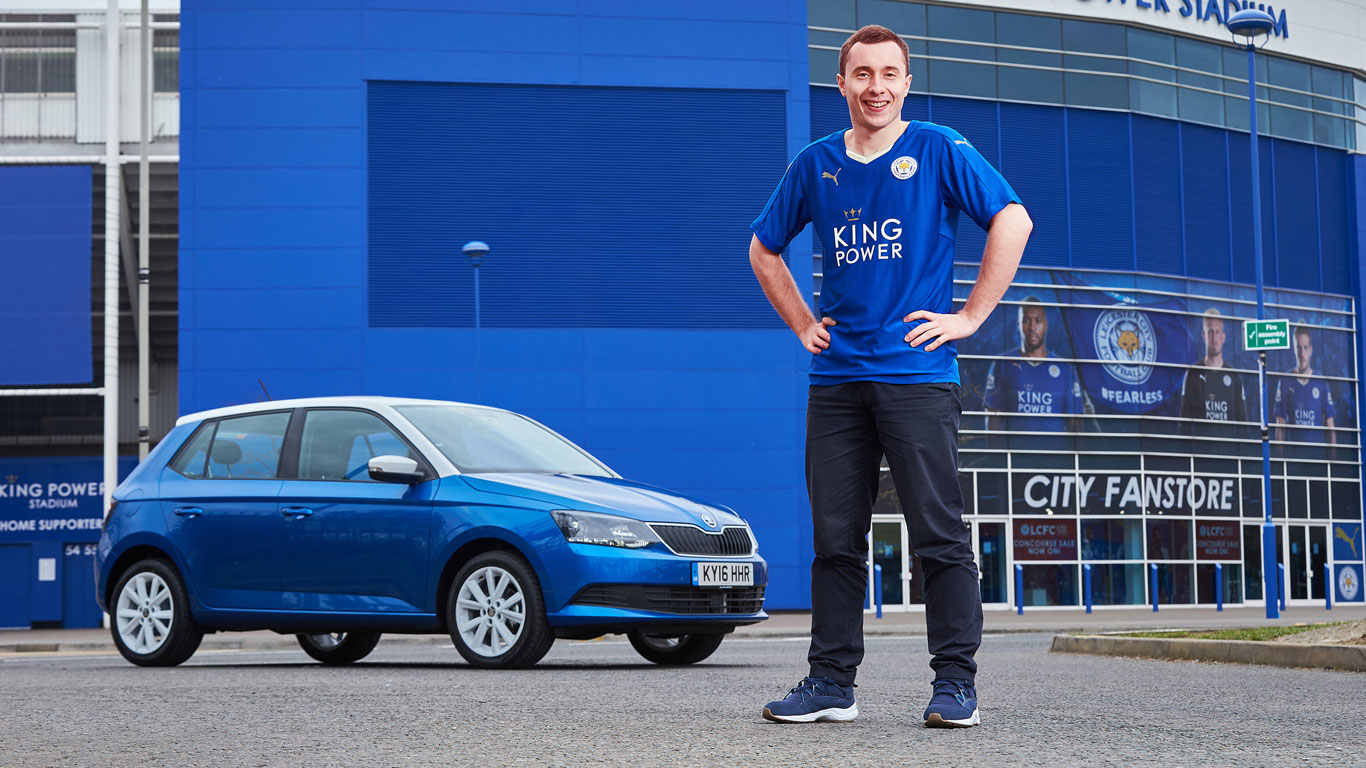 In 2016, research carried out by Skoda revealed that a national trend for adopting the colours of a local football team were being felt most in Leicester. As the Foxes marched to the Premier League title, the sales of blue cars soared by 340% year-on-year.