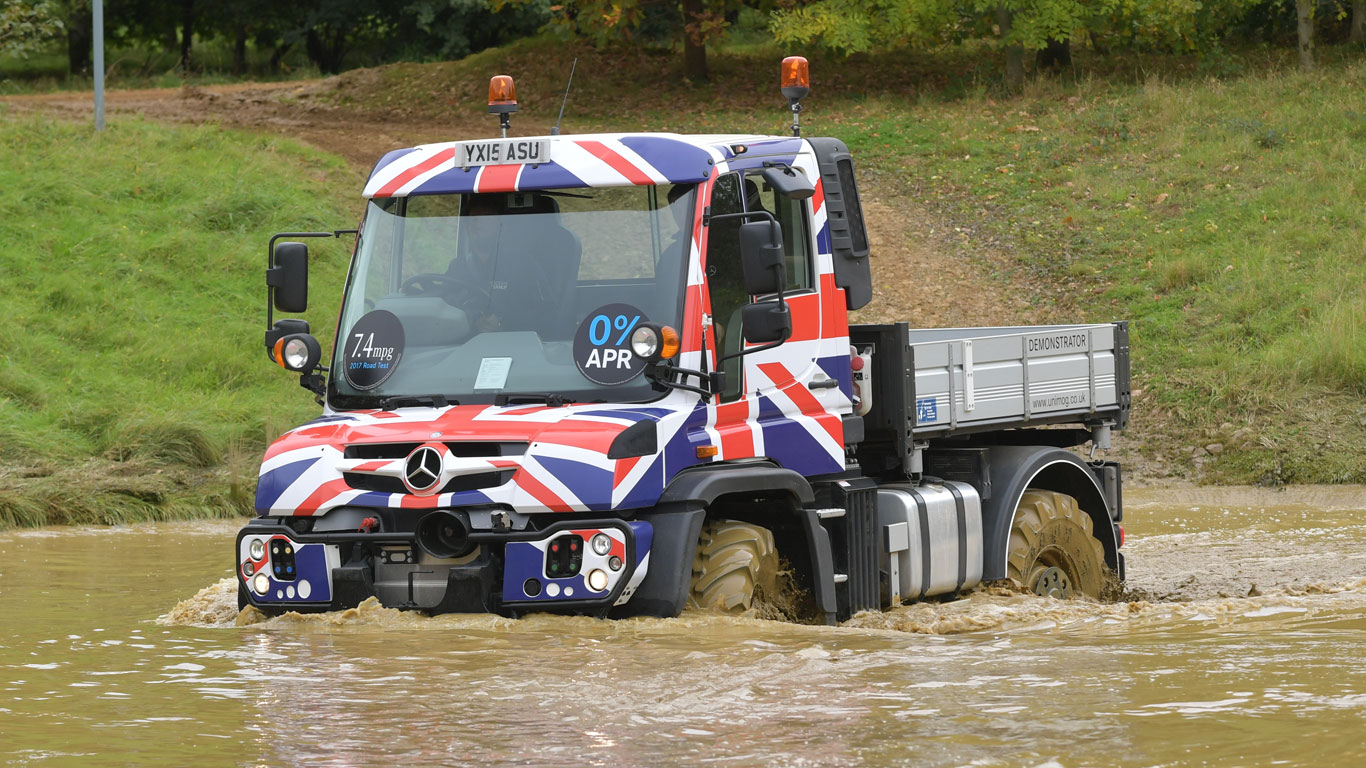 If you’re not familiar with the Mercedes-Benz Unimog, it’s difficult to explain exactly what it is. It’s a kind of truck-cum-tractor-cum-ultimate-off-road-toy. It sells in tiny numbers in the UK, but worldwide (particularly in its home nation of Germany) it’s used by forestry firms, councils and even farmers.

While, on paper, it’s essentially a workhorse, Unimog is a brand in its own right. Off-road aficionados love them. There are even enthusiasts’ clubs around the world – something that can’t be said for the heavy-duty Actros. While I’m not a paid-up member of the Unimog Club UK myself, I’ve always had one mentally stored away in my lottery-win garage. It’s the ultimate off-road plaything, not to mention the perfect vehicle for tackling a zombie apocalypse.

So when Mercedes-Benz invited me to the Millbrook Proving Ground in Bedfordshire to drive a Unimog for the first time, I was a little excited. But first I had to endure a presentation about the practical benefits of the Unimog.

Like a schoolboy desperately watching the clock ticking towards 3.15pm, I learned that farmers are the key market for the Unimog in the UK. They’re better than tractors, explains a man from Mercedes, because there’s no long front bit, making it really easy to see whatever piece of equipment you’ve got stuck on the front. It makes pulling out of junctions easier, too.

The long bit goes on the back, behind the driver, which adds an extra few metres of crumple zone. Great if you’re hedge-cutting on a main road and some inattentive driver crashes into the back of you.

I learned that, while most farmers will baulk at its circa-£90,000 start price, it has excellent residual values that make the Unimog easier to justify. You can, for example, enjoy a Unimog for just £985 per month on private hire. That’s provided you can stump up a £36,000 deposit. 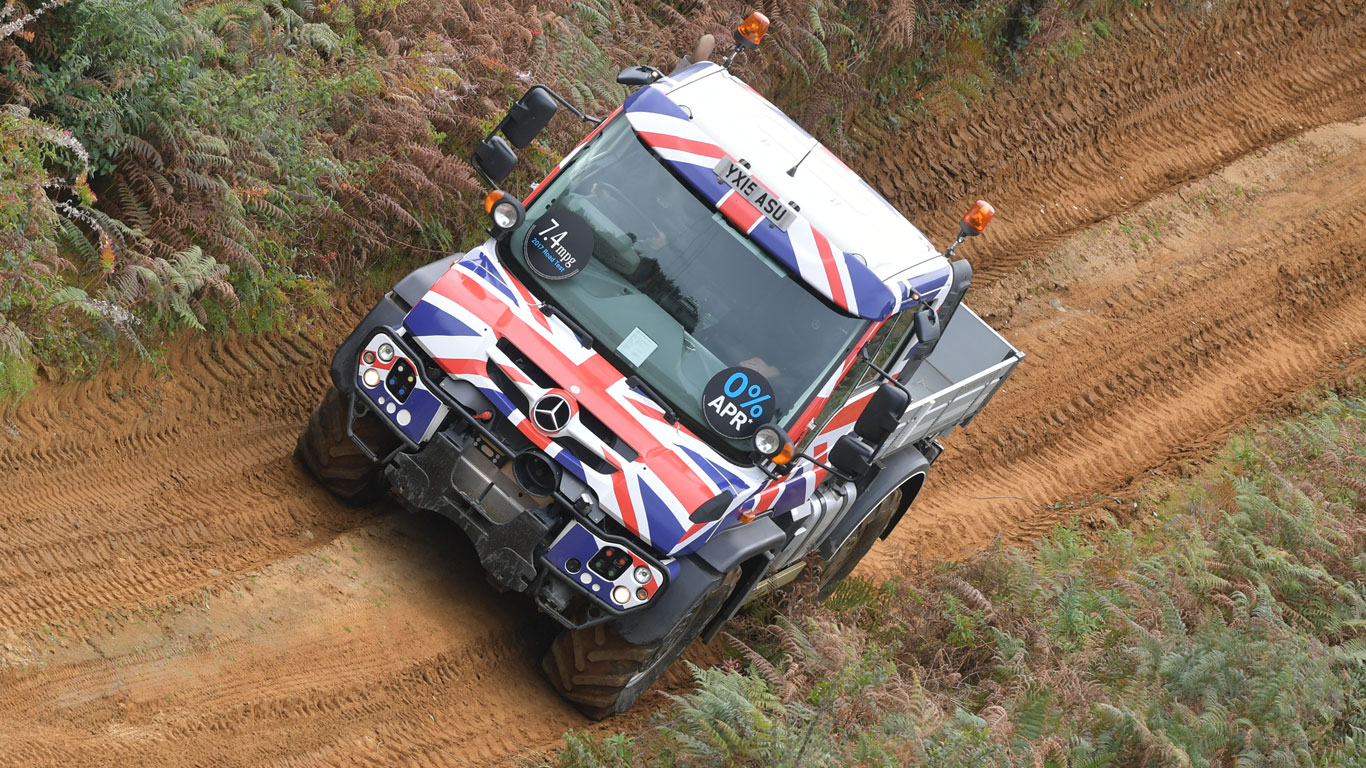 While you may hope that councils wouldn’t dream of spending this kind of money on an off-road plaything, it actually makes sense for them too. Many have a fleet of snowploughs sitting in compounds for nine months of the year, so why don’t they replace them with Unimogs, like they do in Germany? They could spend three months of the year spreading salt and the rest of the year fixing potholes and trimming hedgerows. They’re versatile vehicles.

That’s the sensible stuff out of the way. The stuff that will help you justify the Unimog if you’re a farmer or fleet manager or just own a bit of land you want to play on (sorry, I mean ‘maintain’). What’s it actually like to drive?

Well, first of all, it’s terrifying. Mercedes-Benz will tell you it’s much more intuitive than driving a tractor but, if all you’ve driven before is a car, you have to forget everything you know and learn afresh. While many Unimogs are automatic, I’m being chucked in the deep end with a manual – but it’s like no other manual ’box I’ve used before. For a start, there’s no conventional gearstick. You select gears using a paddle to the right of the steering wheel. That’s not particularly unusual. Except, there is a clutch pedal. How does it work? Well, by selecting the gear, you’re simply telling the Unimog which gear you’d like next. It doesn’t actually change until you dip the clutch.

Add three combinations of locking differentials and an exhaust brake that can be used to slow you down when you’re descending a hill, and there’s a lot to concentrate on. That’s not to mention the size of the thing – bigger than anything I’ve ever driven before, and it’s left-hand drive. You can opt for a clever ‘Variopilot’ system, which essentially lets you move the steering wheel and pedals to either side. This has practical benefits… it might be beneficial to work on either side depending on the job you’re doing, for example, but it also means you’ll be able to sell it in left-hand-drive or right-hand-drive markets when it comes to resale time.

While one advantage of the Unimog over a conventional tractor is its ability to cover long distances if required, don’t make the mistake I did and assume a modicum of comfort has been built in. Its driving position feels upright and awkward, while the seats are firm. It’s bumpy, too, meaning you’ll find yourself slowing down to smooth things out. It’s a bit like a very, very big Defender.

Like a Defender, it goes without saying that the Unimog is practically unstoppable off-road. Portal axles provide incredible ground clearance, making it capable of fording 1.2 metres of water as standard. The diffs, meanwhile, are offset, meaning they’re less likely to be wiped out by ruts.

Once you get your head around how to control the thing, the ‘Mog is astoundingly capable. I’ve never driven a tractor – you’ll have to look elsewhere if you want an objective back-to-back comparison between a Unimog and a JCB Fastrac – but it’s hard to imagine a scenario in the UK where a farmer will need to go anywhere a Unimog can’t. Apart from narrow lanes, perhaps, where it hits a stumbling block compared to a traditional 4×4 vehicle.

Does the Unimog make for a sensible purchase? Mercedes-Benz says yes, and perhaps a few hundred buyers each year in the UK will agree. I’ll let you make your own call on that, but it’s undeniably an incredibly cool and capable vehicle. Despite being one of the scariest vehicles I’ve ever driven, it remains on my lottery wish-list.

>NEXT: This Mercedes-Benz Unimog handles like it’s on rails