How does the Citroen Berlingo Worker van handle a rally training school course in the hands of WRC hero Esapekka Lappi? We found out... 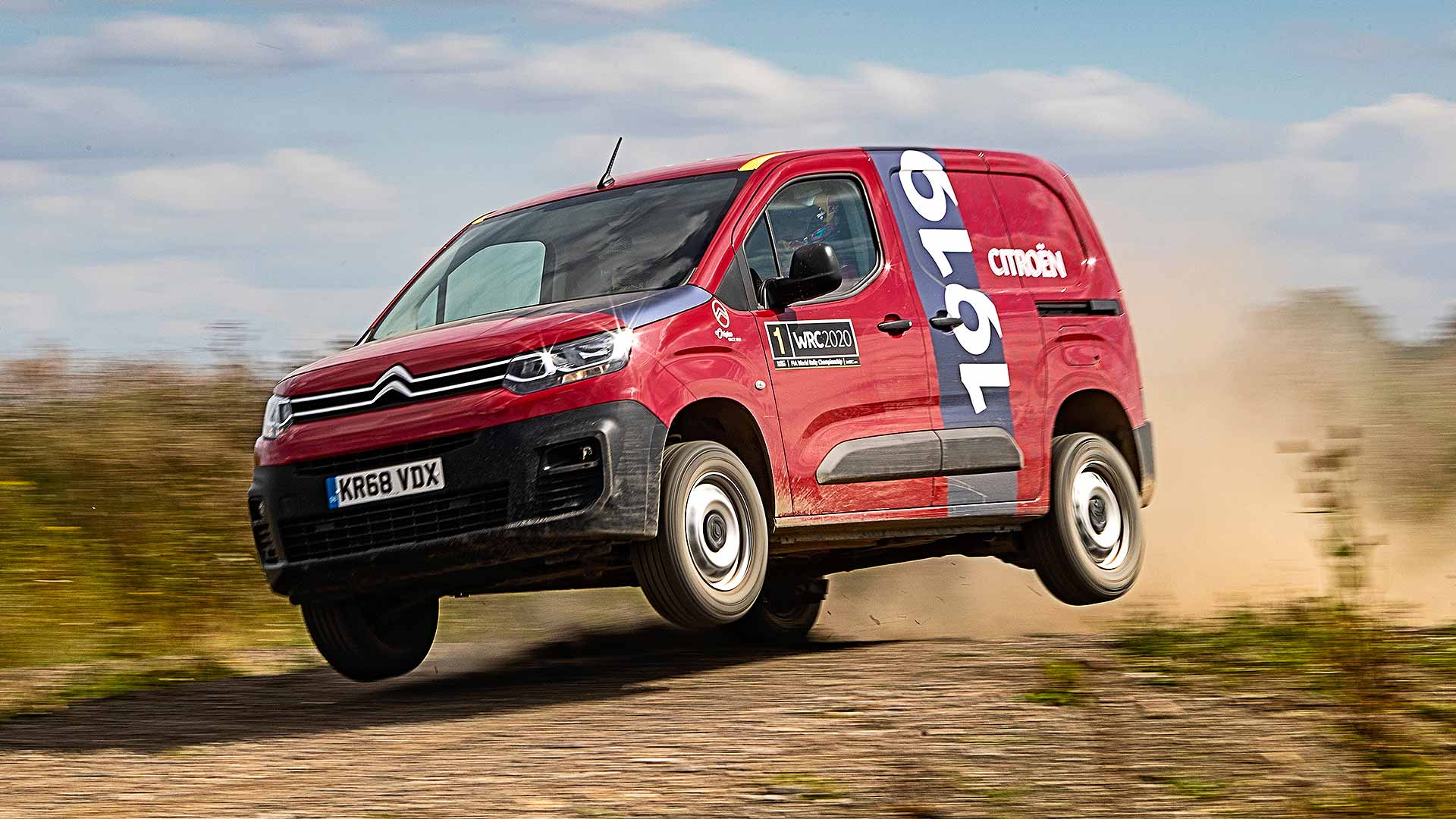 The Citroen Berlingo van is virtually a brand in its own right. Frequently Britain’s best-selling light commercial vehicle, it has built a reputation since 1996 for toughness, flexibility and dependability.

So when Citroen World Rally Championship star Esapekka Lappi visited Britain, an idea was hatched. They could have let him do demonstration runs in a road-going version of the C3 supermini he spectacularly drives in the WRC. Fun, but maybe a bit ho-hum. 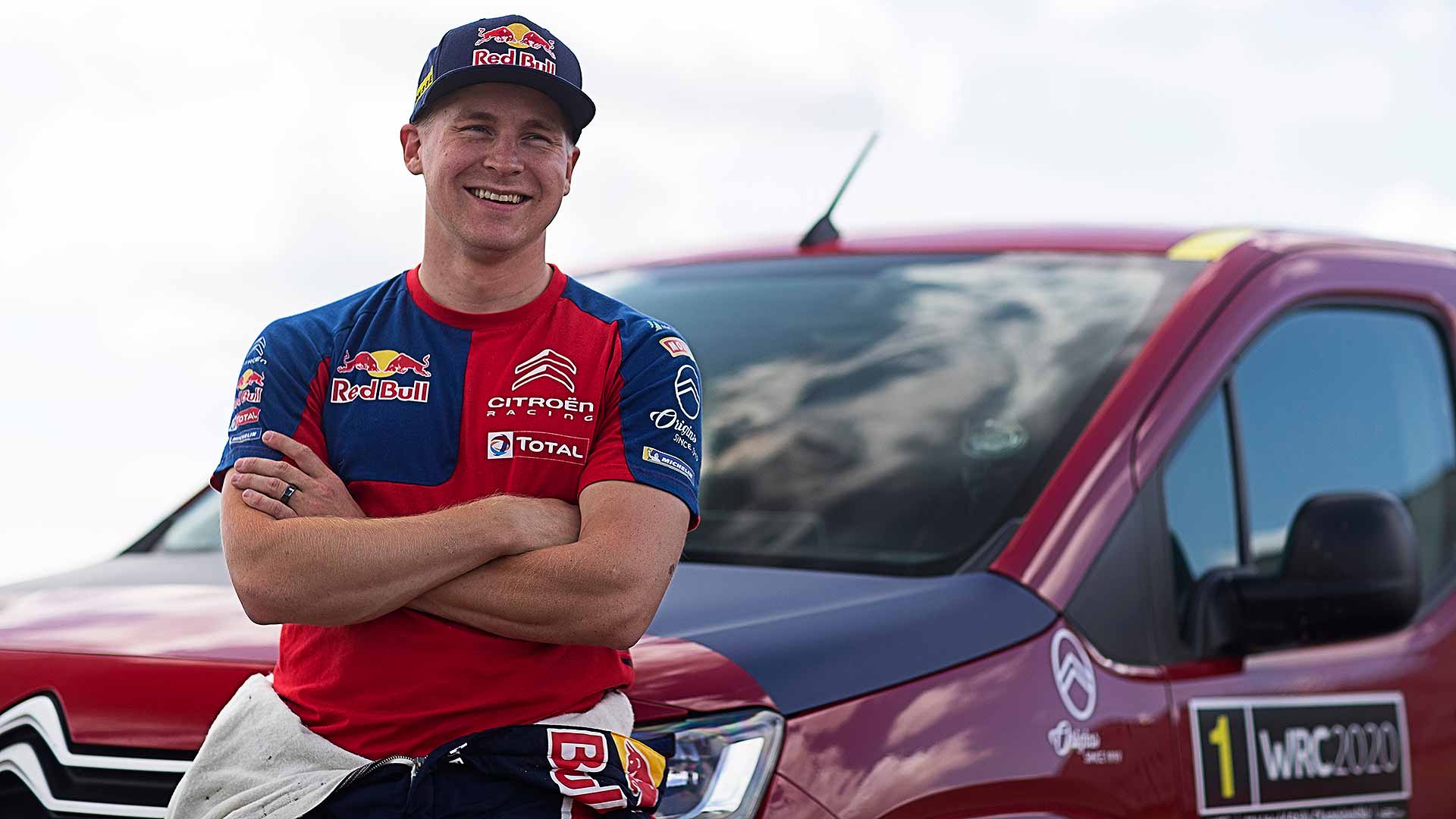 Instead, brilliantly, a new Citroen Berlingo van was given a rally-spec engineering makeover. A rally training school was hired for the day, and Lappi was let loose towork his magic. Even better, I was lucky enough to hitch a ride.

The idea was to show off how robust the Berlingo is. Citroen UK dubbed it a ‘stress test’, and it’ll be interesting to know if a day’s thrashing by one of rallying’s hottest young talents now becomes an official part of the development sign-off process. 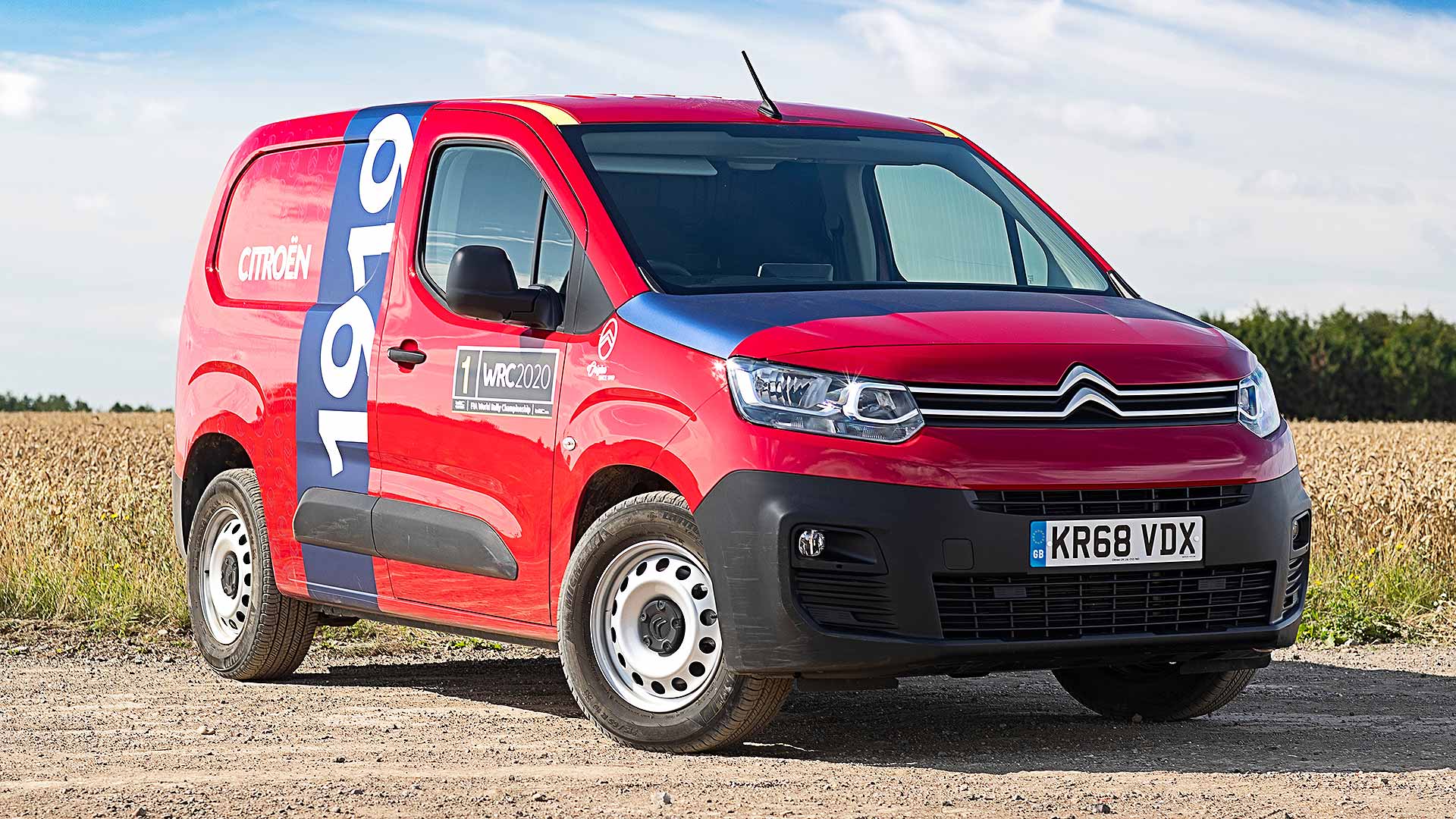 Citroen had an extra ace to justify the day: a Berlingo ‘Worker’ version was chosen. This has 30 mm more ground clearance than the regular van, more underbody protection, hill descent control, Grip Control (which magics up extra traction from the front wheels via electronics) plus beefier mud and snow tyres.

It’s more WRC-spec than any road-going C3, particularly with the installation of a regular ‘bar’ handbrake instead of the standard Berlingo’s electronic parking brake. Add on a WRC-style livery (“we weren’t allowed to use Red Bull branding, so we went with our centenary logo instead”) and it was all set for an unlikely afternoon of driving. 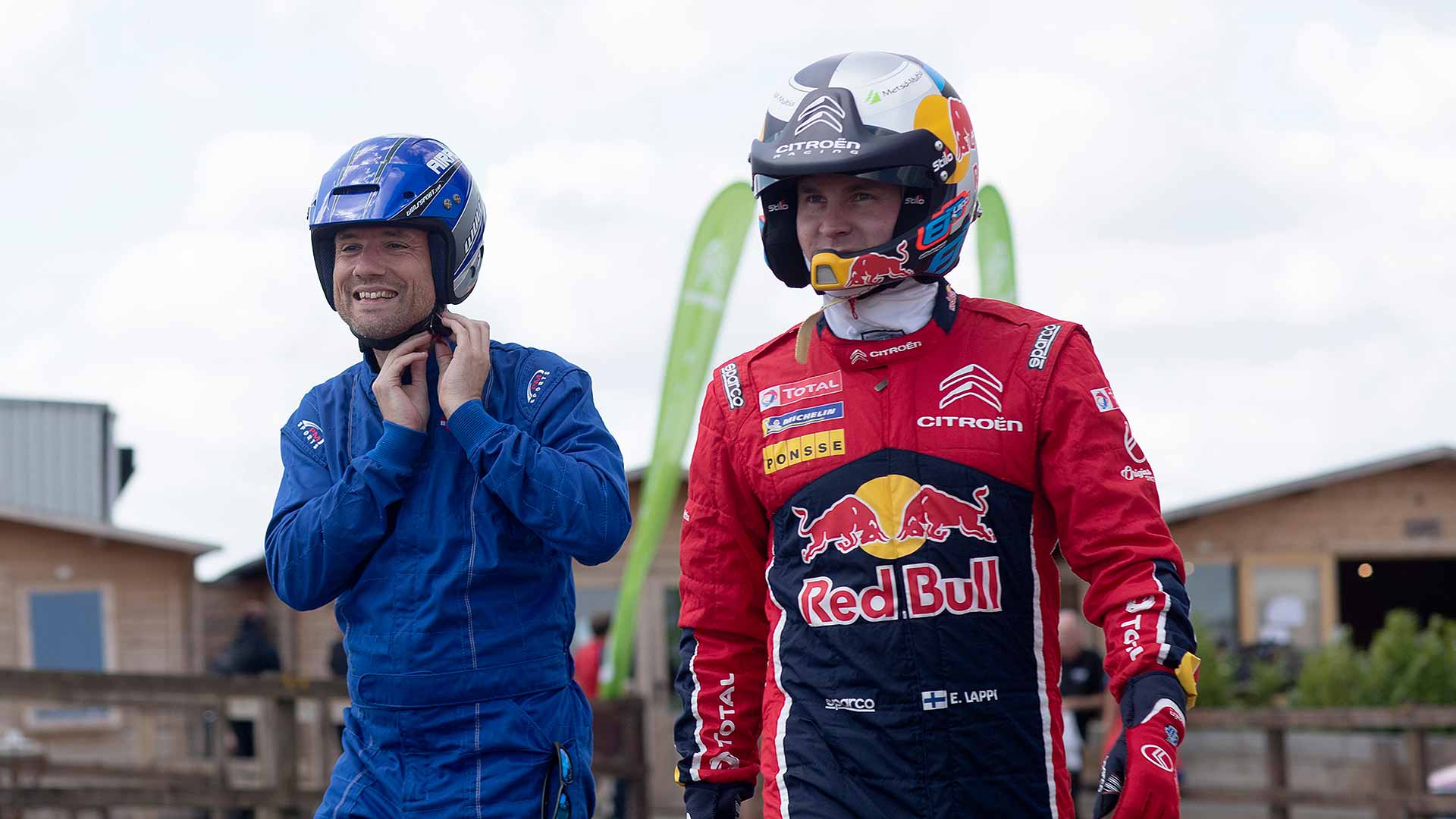 It was my turn first. Cool as a cucumber, Esapekka cheerily told me to do whatever I wanted, go as fast as I liked. Racing drivers can be super-cautious when being driven by people they’ve never met: rally drivers are a different breed. As I fired up the stock HDi diesel engine, he sat back and relaxed, as if we were driving to the first job of the day.

All that was missing was a copy of The Sun on the dashboard for him to read.

I won’t bore you with what I drove like, because I was rubbish. I understand circuit racing, but I really can’t get my head around rallying. There’s no grip, the vehicle must always be dancing, usually sliding, and the way you have to use Scandinavian flicks is a bit like playing snooker. I was bamboozled. 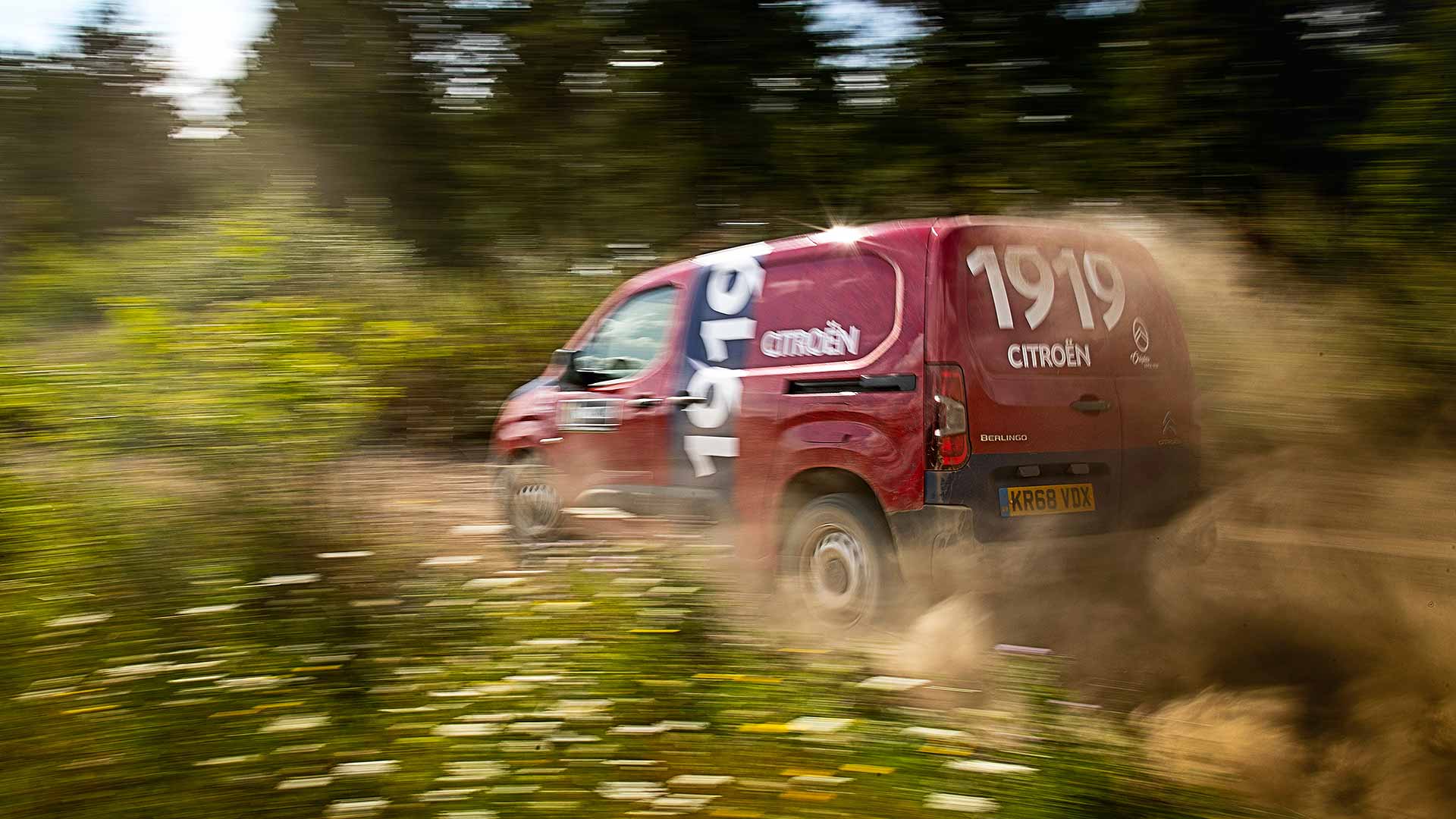 The van, amazingly, felt great. Loads of suspension travel made light work of the lumpy rally-spec surface and even though I hadn’t a clue what I was doing, it was still fun to slide around. But I knew I only had a limited time with Esapekka, so I pulled up early. Time to swap, and show me how it should be done. 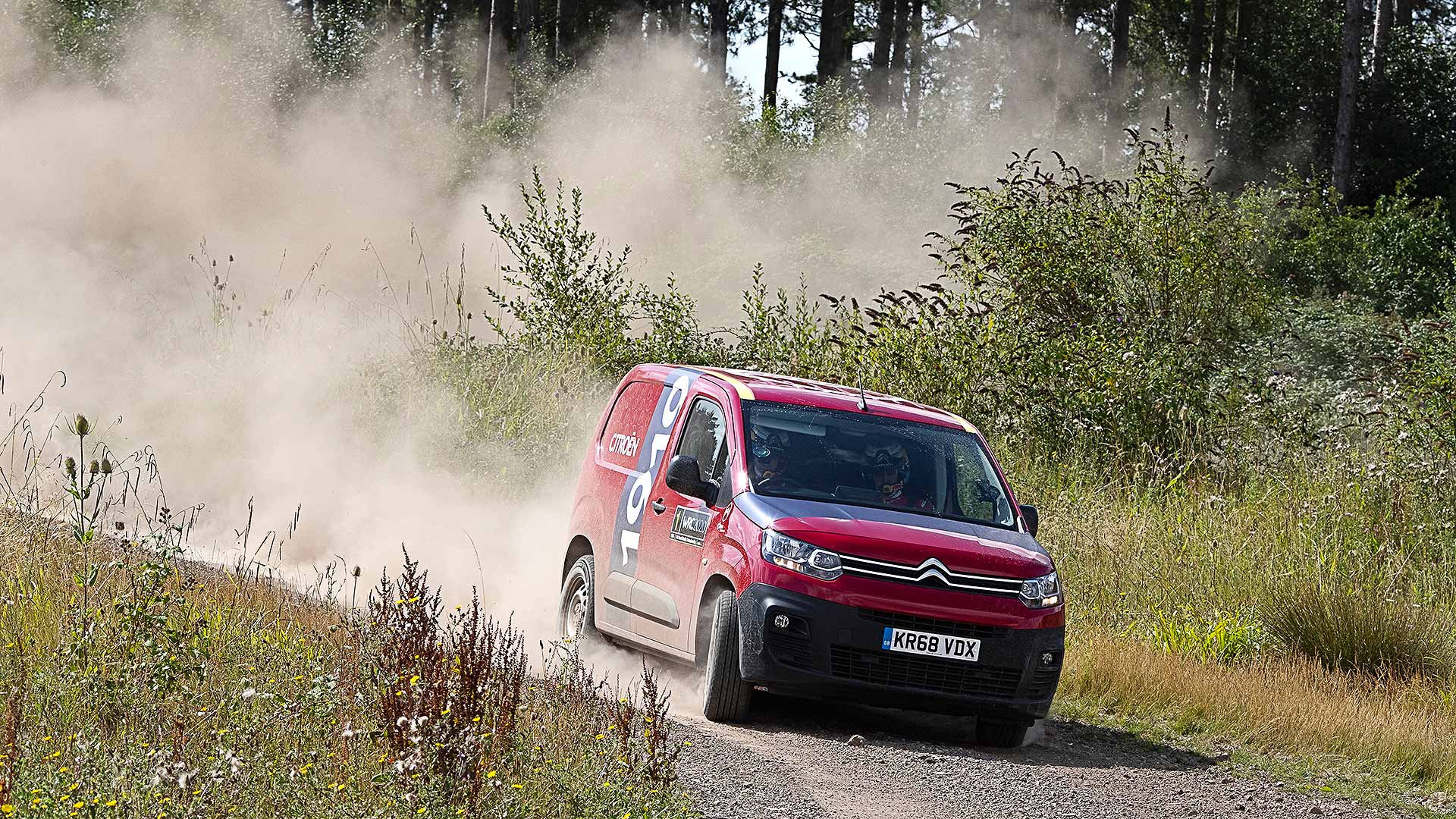 I quickly got it barely 10 seconds later, as we scrabbled away in a gravelly, clattery rush, hurtled towards the first corner and, unlike me, he didn’t brake and totter round but instead pitched sideways and drifted through it at barely-abated speed with the most ludicrous cloud of dust left in our wake. This is how you rally a Berlingo van.

At least with circuit driving, you can work out braking points and likely speeds through corners. Sitting alongside a rally driver, even in a van, is the most random experience because it all seems so confidently improvised and beyond-comprehension fast. This was a sun-baked gravel course whose surface you could do skids on in your shoes. There’s no way a standard road-going diesel van should be going this quickly. 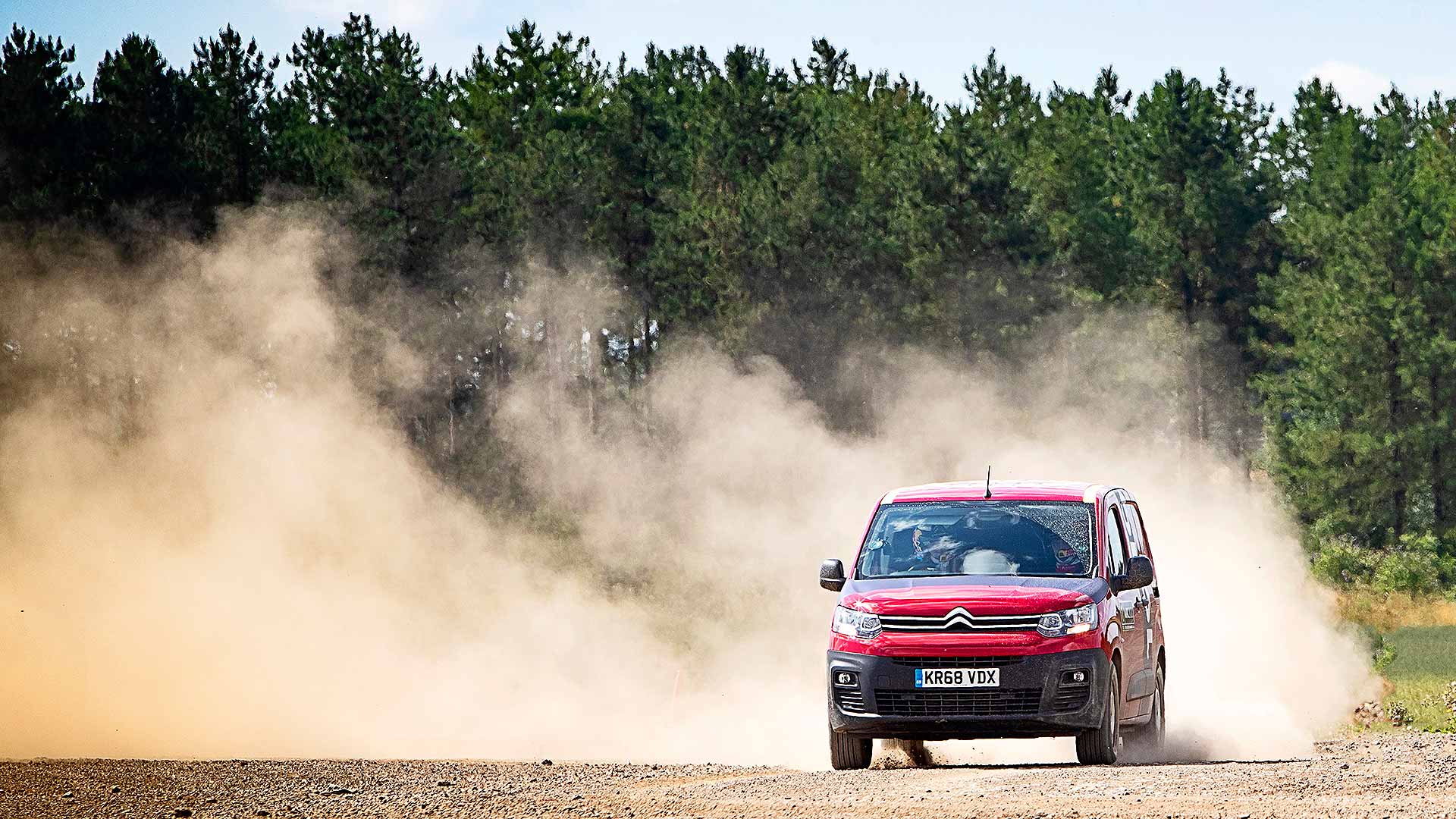 But Esapekka was on it, working at the wheel in a blur, making it do the most graceful things through bends probably three times faster than I’d taken them. Absolutely glorious is the only way to describe it – genuinely more fun and thrilling than many a supercar blast around a racetrack. 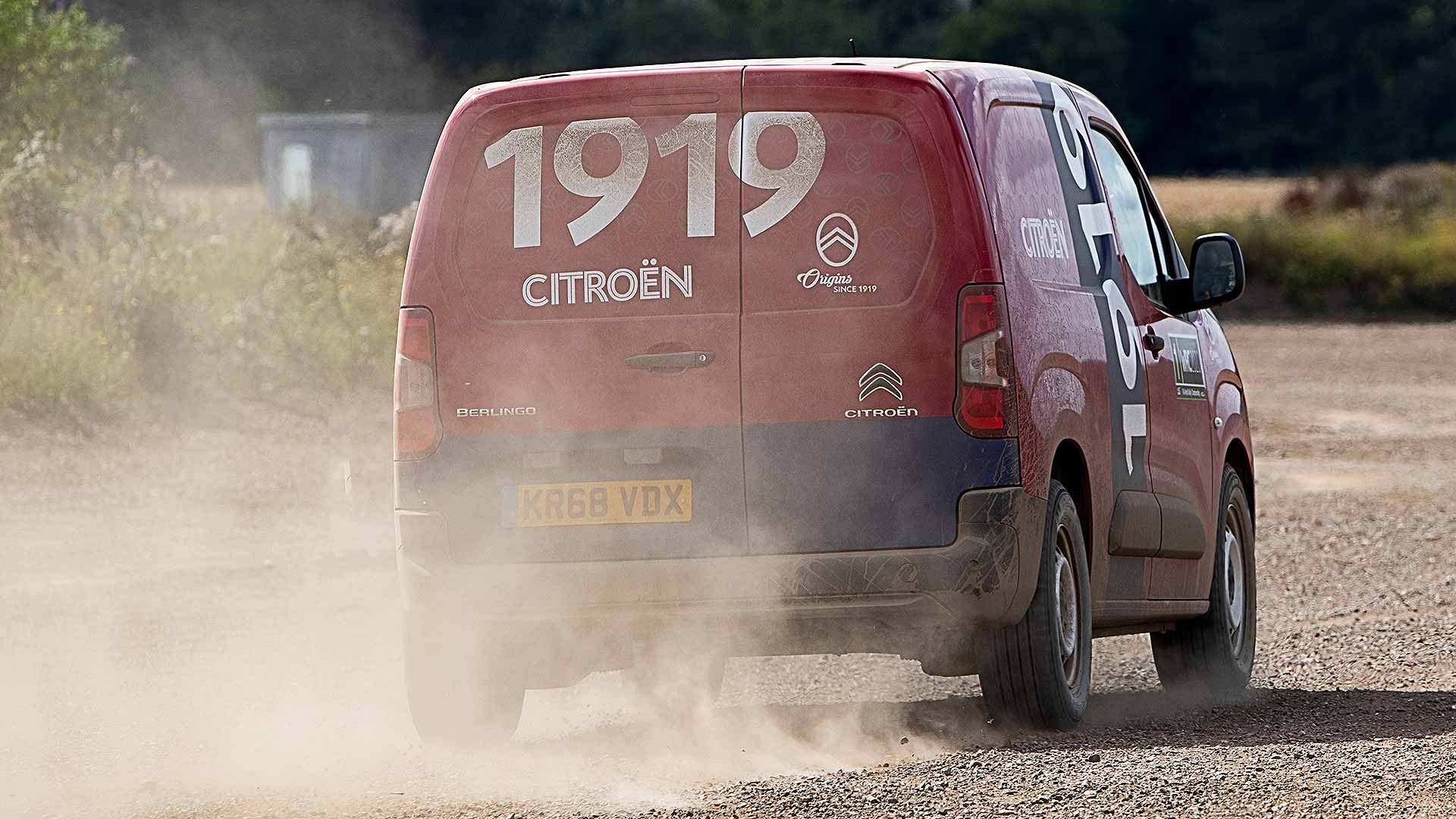 We eventually had to stop because there was so much dust, we couldn’t see where to go. I had no idea a Berlingo van could do what I’d just been shown, and certainly no clue it could seemingly take such treatment in its stride. The man who winces when he hits a pothole had just experienced a van being monstered by a WRC driver, and it was still ready for more. 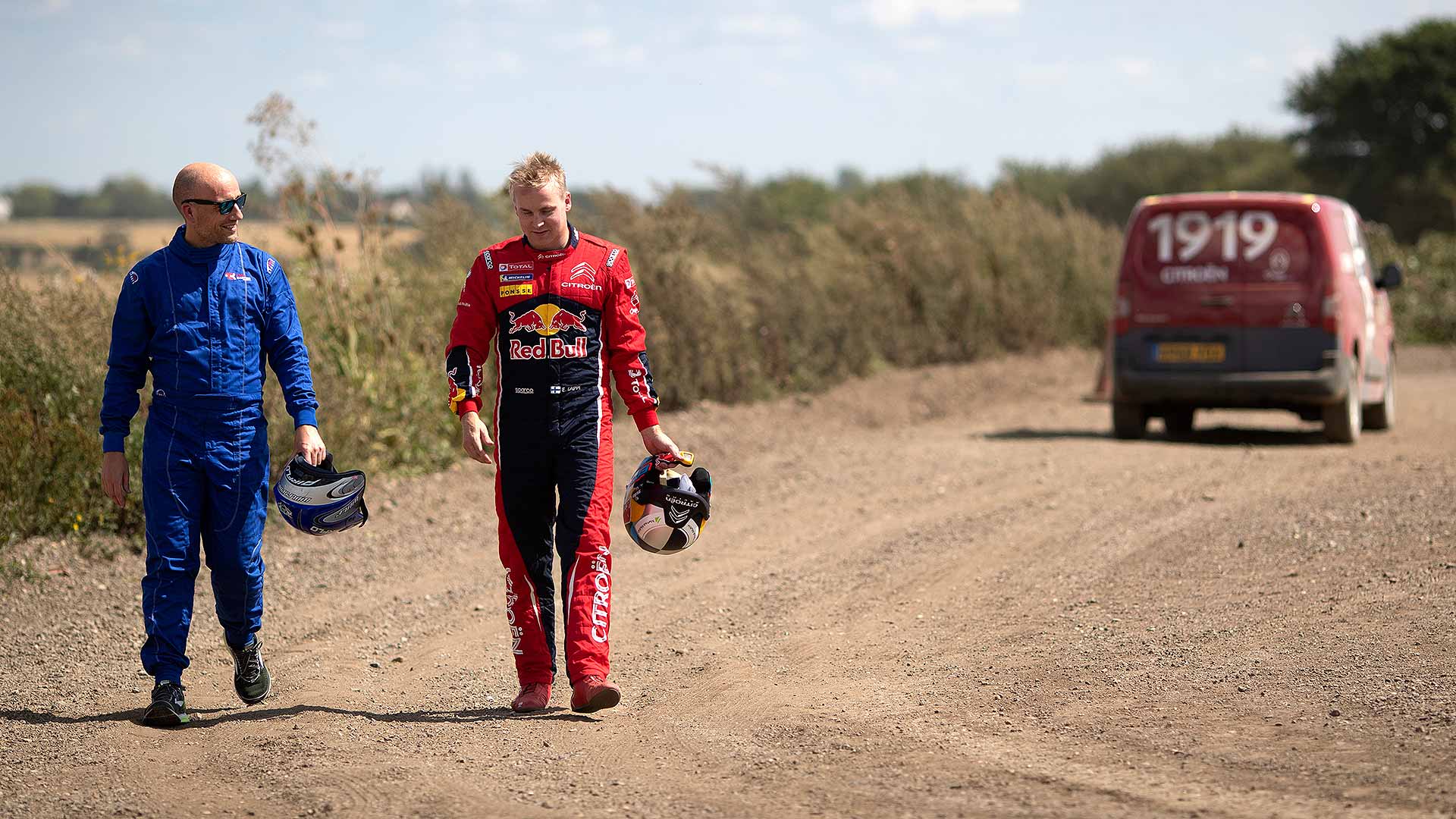 Indeed, once the dust had settled, it was out again, so I could marvel at the 25-metre drifts and, as it disappeared back into the dust, growl of a hard-worked diesel engine and sounds of tyres battering gravel indicating Esapekka wasn’t letting up.

“It has a long heritage and is very well known in the light van sector,” Citroen’s CV boss told me later. “We had the chance to work with Esapekka so we thought we’d do something a bit different, to add to the Berlingo van brand story.”

Quite brilliant, Citroen. Even Esapekka seemed surprised. “I’m actually impressed with how much fun it is to drive – it corners well and it’s very strong.”

Rally drivers really are a different breed, and will drive anything spectacularly. That a future WRC champ has given such kudos to the Berlingo van is surely now worth a point or two on the building site or delivery yard.

The new Vauxhall Mokka is on sale now with first deliveries beginning in April 2021. There is also a new Mokka-e EV with a 201-mile range
Read more
Previous articleSpeeding drivers ‘most likely to crash’
Next articleNew 2019 SsangYong Korando: everything you need to know

The B in BRZ stands for Boxer, but it could so easily be Balance. The Subaru BRZ – or Boxer Rear-wheel-drive Zenith – is...
Read more

Bring a Trailer: Exclusive insight into the auto auction company

With the auction website now responsible for 250 sales each week, Bring a Trailer has quietly become a major player in the collector car market
Read more

2016 Budget is expected to be tough: here’s what may be in store for motoring…
Read more

Renault has announced prices and an expected delivery date for the new Clio. Buyers will start receiving cars in October 2019, having paid from £14,295.
Read more
Retro Road Test

The 996 Turbo is a high-watermark in the history of the Porsche 911 – and relatively affordable, too
Read more
Car News

Software-over-the-air capable Jaguar models should be getting integrated Spotify soon, as the new F-Type debuts the software.
Read more
Opinion

Opinion: the internet is wrong about the new Ford Puma

Rage against the machine: some internet commenters are unhappy with the new Ford Puma. Our man reckons it's time to chill out and embrace the 'not a coupe'.
Read more

We took part in the WLTP Challenge, learning how to drive as efficiently as possible. Here are our top tips to save fuel – and money.
Read more
Advice

Plastics and leather used in car cabins are under attack from hand sanitisers. But in times of lockdown, there are other ways to protect your interior.
Read more
Advice