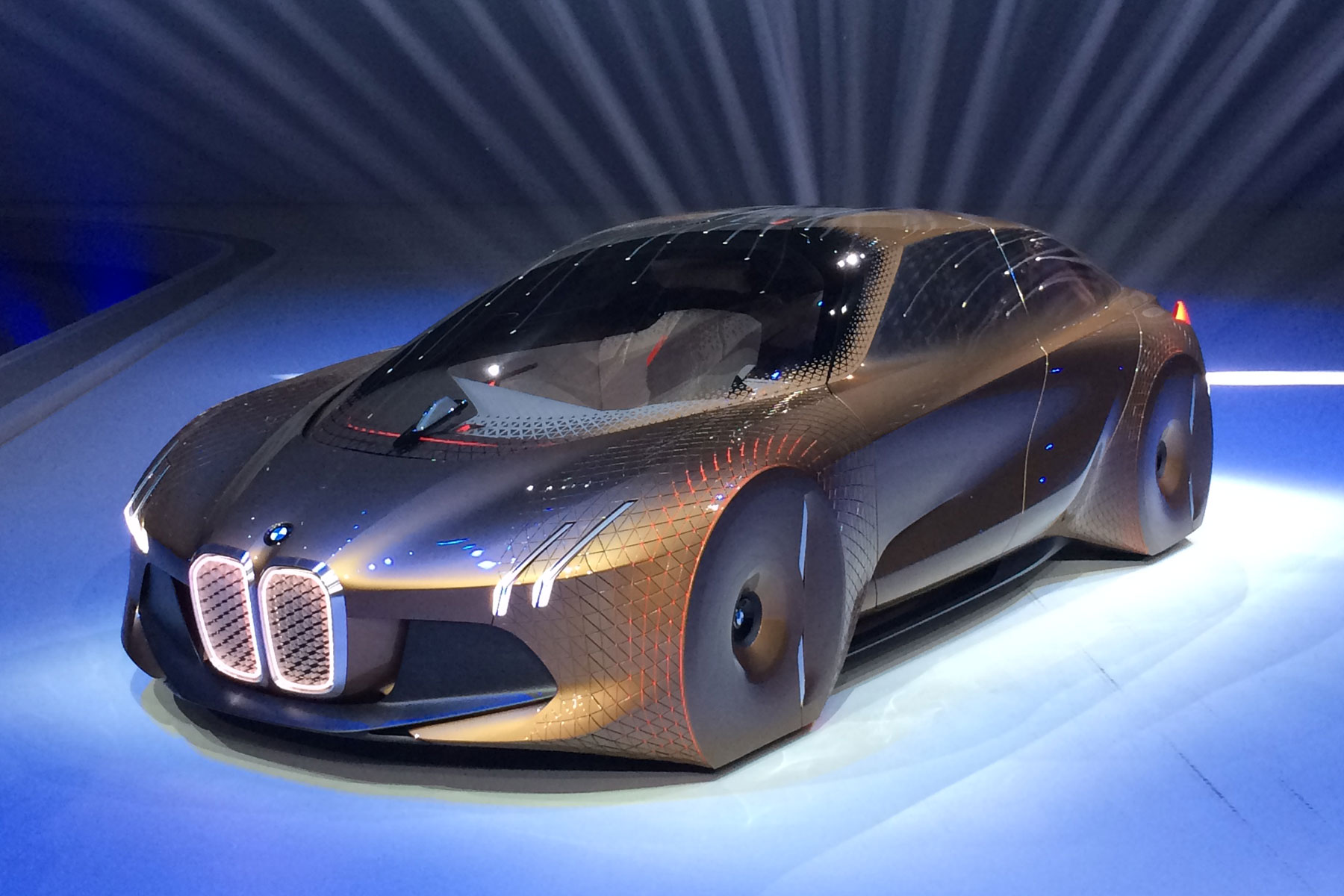 BMW has revealed a dramatic concept car called Vision Next 100 that takes a far-sighted look into the autonomous, zero-emissions cars of the next 20 and 30 years – exactly 100 years to the day since the company was formed.

The BMW Vision Next 100 is a 5 Series-sized car with a 7 Series-sized interior and a futuristic shape created by BMW Group design chief Adrian van Hooydonk.

The future car will take BMW’s reputation of being ‘the ultimate driving machine’ to the next level, says van Hooydonk. With the Vision concept car, “we want to turn the driver into the ultimate driver.”

It’s thus packed with technology – but the interior has purposefully been kept clean. There is a steering wheel – this is important, says Van Hooydonk – but other controls and buttons are absent.

The Vision car is also an autonomous car and in the so-called ‘ease’ mode, the entire screen becomes a display, with information such as video feeds of conference calls and even images such as attachments to emails.

It’s not all about simply overloading the driver with connected car information though. BMW wants to regulate the flow of data to the driver, by giving the vehicle intelligent and self-learning capabilities. Crucial information will only be shown where necessary, and not at inopportune, danger-inducing moments.

Trick features here include a dashboard whose surface is made up of ‘waves’ of warning lights: the car will, for example, detect a cyclist hidden behind a van and the dashboard in that corner will light up red: as the cyclist nears the car, the lights will flow across (and the car will autonomously stop where necessary).

Purposefully, seats and door panels blend into one within the open plan interior. This is to make it more flexible and comfortable in autonomous mode: occupants will be able to relax, turn around to speak with passengers or simply lean back for the conference call they’re conducting…

Outside, It retains the BMW kidney grille, says van Hooydonk – but instead of air intakes, it contains all the sensors for the autonomous tech! Also, four round lights become four light ‘bars’.

It’s a simple, purposefully minimalist design, with few lines but complex use of light and shadow interplay. It’s as big as a 5 Series outside yet as big as a 7 Series inside…

Uniquely, the wheels are fully enclosed, but ‘flexible’ bodywork allows the front wheels to still turn – the panel ‘expands’ so the wheels can steer.

The windows are also heavily tinted in body-colour. BMW says privacy will be even more important in autonomous cars – where, presumably, you won’t simply be concentrating on driving, and may not want others looking in and watching you…

The BMW Vision Next 100 has a ‘companion light’ structure in the centre of the dashboard. In autonomous mode, this glows white, to let occupants know the car is in control. It is also functional to pedestrians: when, at a crossing, the car detects someone, it glows green, to let them know it’s safe to cross.

Why is the BMW Vision a sporty saloon?

Unlike many other futuristic concepts, the BMW Vision Next 100 is a low-slung saloon car rather than a tall SUV. van Hooydonk said this us because “The Neue Klasse cars started the growth of BMW and the company became known for sporty limousines: we took this as a theme as we feel it’s the core of the brand.

“The Vision vehicle should thus be a sporty limousine.” The Cx drag factor of 0.18 sets a new record, says van Hooydonk, which is another reason why the design is so sleek.

BMW won’t yet be drawn on how far off production the remarkable Vision Next 100 concept is though. van Hooydonk simply (and interestingly) said: “If you can imagine it, you have made first step…”

Kruger did add that it’s very much for the next 20-30 years, rather than any sooner: “There will be some components and elements coming earlier, but this is a car looking far into the future with BMW Group.”

One of our writers has already put down a deposit on a new Honda e electric car – even before anyone had reported what it's like to drive.
Read more

The Alfa Romeo Tonale Concept has been revealed at the 2019 Geneva Motor Show. Alfa, in its second attempt at an SUV, has made another looker
Read more

As cars get cleverer, so do those determined to get behind the wheel without your permission
Read more

BMW hits target of delivering 100,000 electrified cars in a year

Most buyers of multi million-dollar hypercars park them up and lock them away on delivery. This one is taking his across the USA for a road trip.
Read more