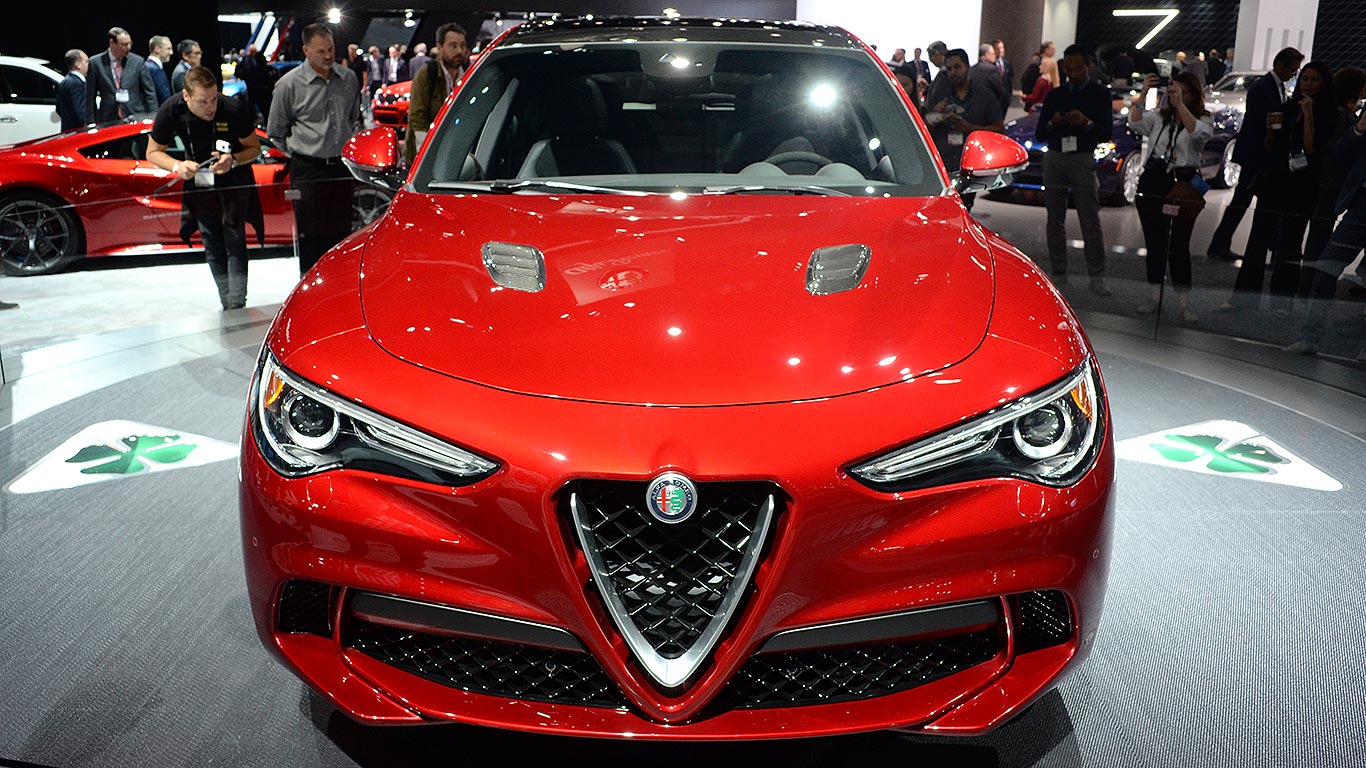 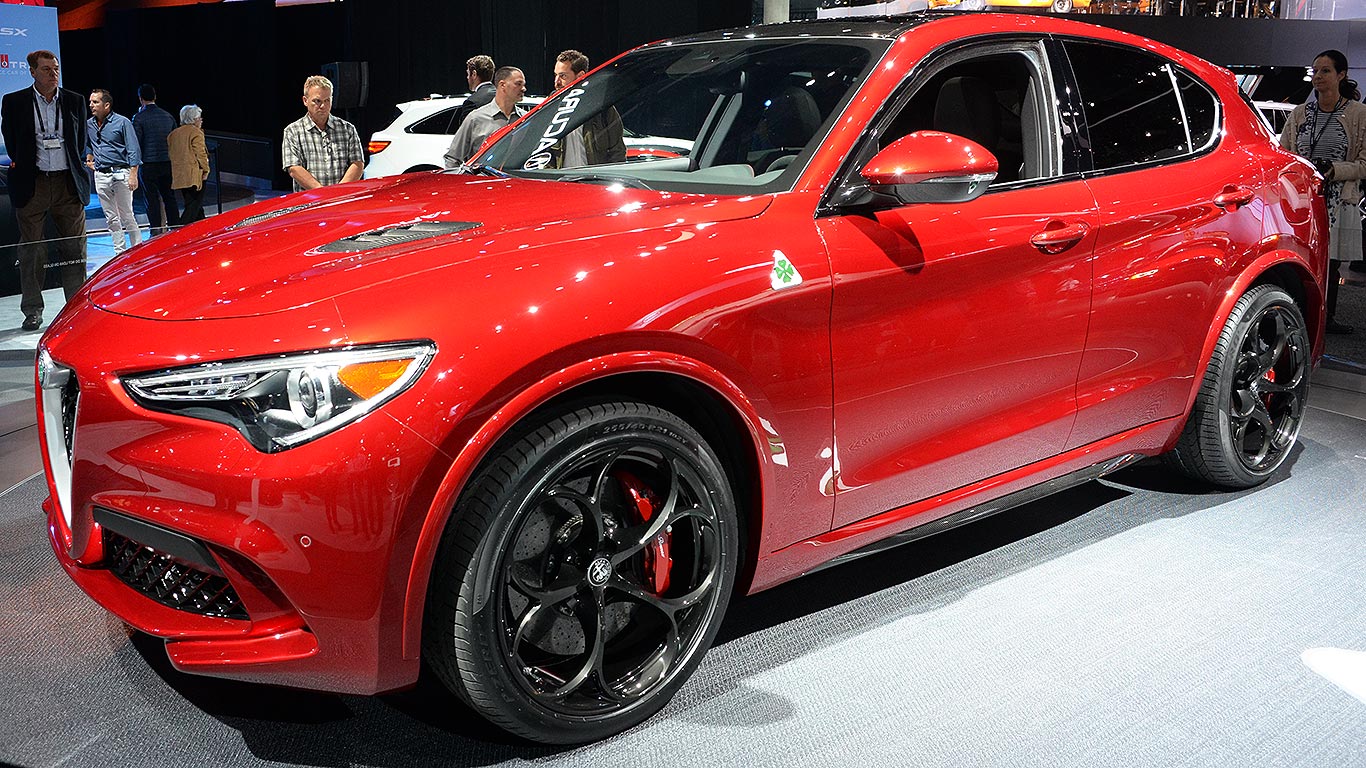 At long last, Alfa Romeo has revealed its first ever SUV, called Stelvio. Debuting at the 2016 Los Angeles Auto Show, the new Alfa Romeo Stelvio will in 2017 launch to take on the Porsche Macan and Jaguar F-Pace in the battle of the sporty premium SUVs.

And Alfa reckons it’s in the running with the first SUV it’s made in over 100 years of production. Read on to find out why… 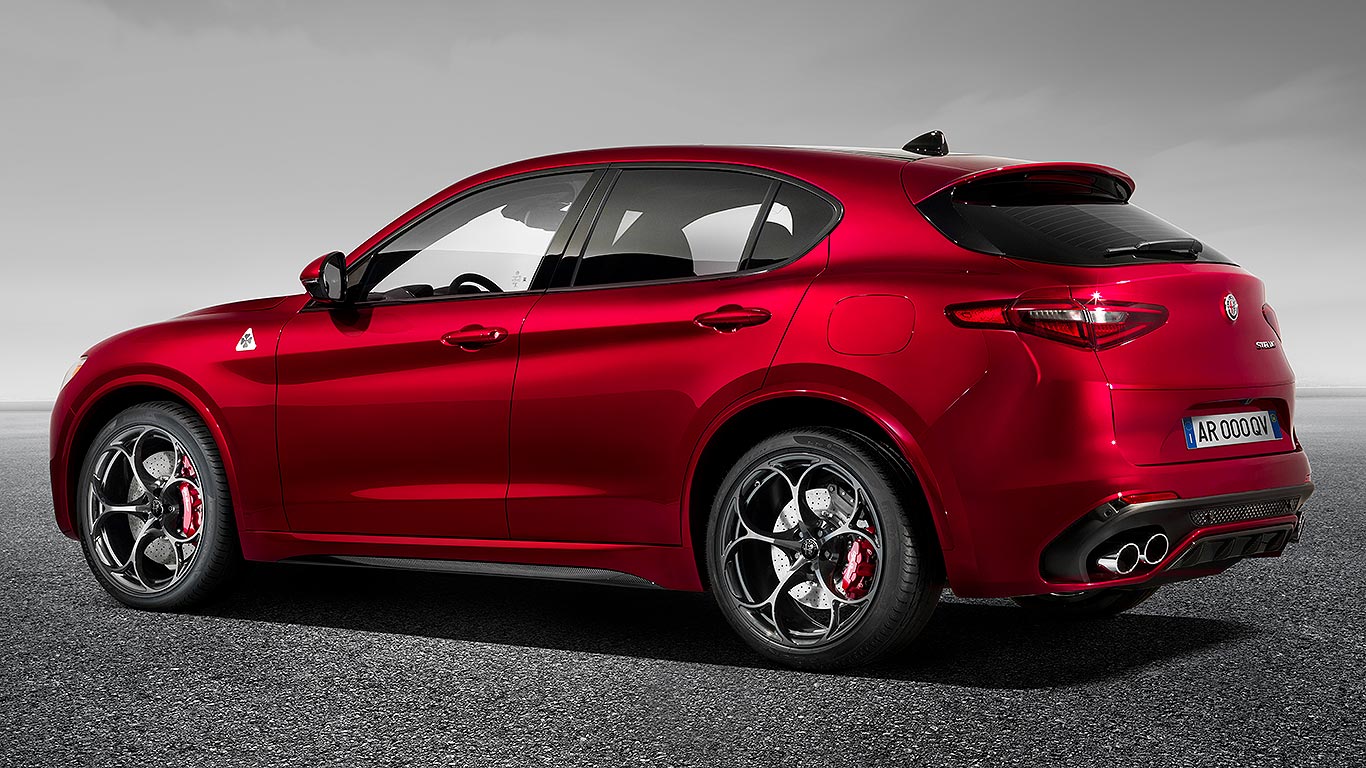 The Alfa Romeo Stelvio is the next part of Alfa’s rebirth as a sporting premium alternative to BMW, Audi and Jaguar. The Giulia saloon set the ball rolling, but it’s the Stelvio SUV that’s the most important of the two. This is the model that should deliver the strong sales and fat profit margins necessary to make Alfa sustainable. There’s a lot riding on the Stelvio, alright – hence launching it in LA, one of the world’s key SUV markets. 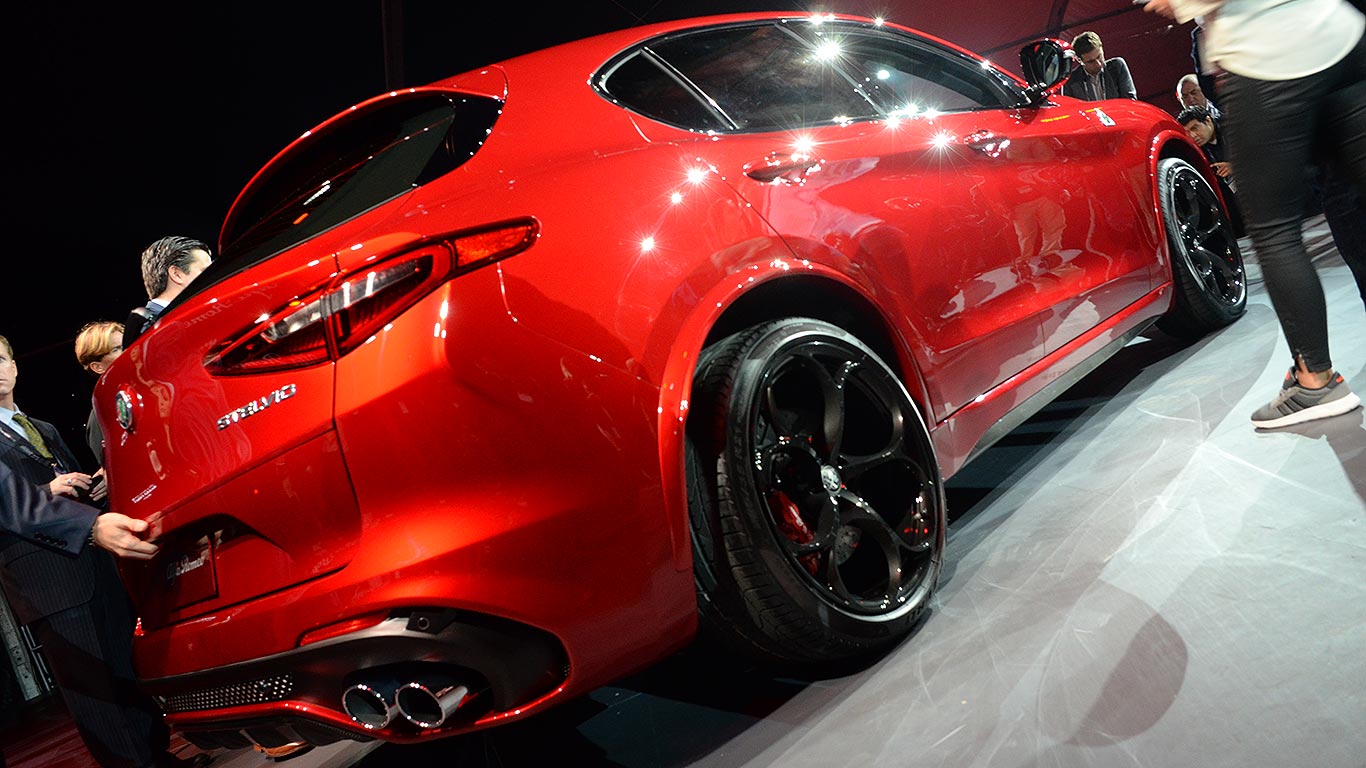 It certainly packs a visual punch, the Alfa Romeo Stelvio. Derived from the look of the Giulia saloon, this is much bolder and more substantial, particularly its prominent, huge Alfa grille and the inset bonnet shutline. Air intakes are suitably enormous on this Quadrifoglio variant too.

Cloverleaf crests feature on the front wings (that’s what Quadrifoglio means in Italian) and the extended wheelarches are colour-keyed, as are the side skirts. Carbon fibre trim features on this launch model too – more mainstream models will be toned down a bit. Even so, whereas many SUVs go for colour contrasts with the plastic bits to reinforce their tough off-road nature, Alfa’s instead given the Stelvio more of a performance car finish. Its intent is clear.

The rear hatch has a steep rake and a big roof spoiler, plus quad exhausts on this Quadrifoglio variant. The sculpting around the rear lights is smart and we like the ‘Kamm tail’ design of the tailgate itself. This crisp cut-off is likely to benefit high-speed aerodynamics. The rear haunches are powerful too, although from this angle it does also remind us a little of the Maserati Levante… 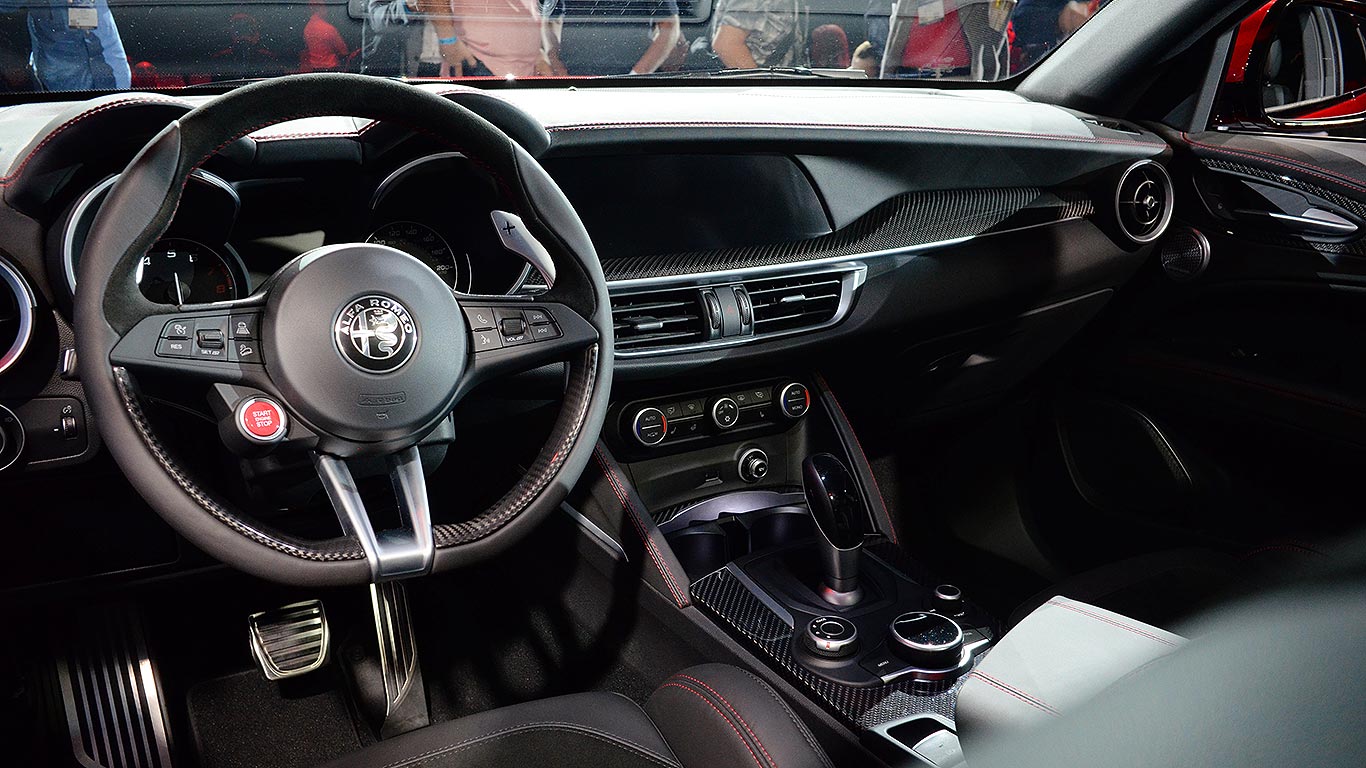 Inside, the command-like interior is familiar from the Giulia, but perhaps even more elegant and premium than that car. Alfa’s had a bit more time to work on the Stelvio dash, and it shows. The cowled dials, flat-bottom steering wheel and huge central screen dominate: also check details such as the Ferrari-like starter button on the steering wheel, and the Alcantara dash top with red stitching.

Underneath, the Stelvio is derived from the Alfa Romeo Giulia architecture. It’s built in Modena – famous for its Ferraris – and the brand insists the Stelvio name has been chosen to reinforce its sporty SUV focus. The Stelvio Pass is the highest mountain pass in Italy and packs 75 corners into 20km. If Jeeps are Trail Rated, it seems this Alfa Romeo is Stelvio Rated. 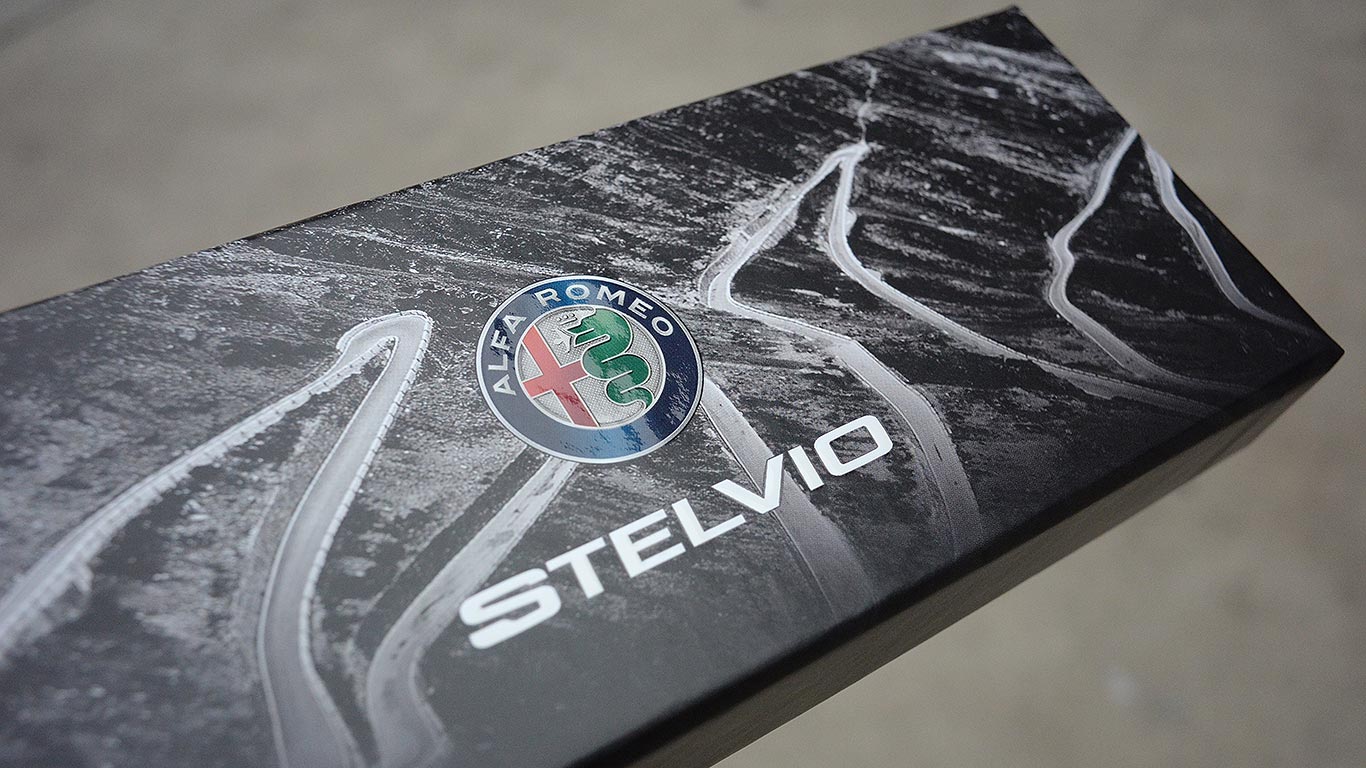 The engine is one of the most exciting bits. This is not quite a Ferrari engine in an Alfa, but it’s the next best thing, as the supercar maker has been heavily involved in its design. The 2.9-litre V6 twin-turbo engine produces 510-horsepower and, while performance figures haven’t been released, we’d suggest the Quadrifoglio will do 0-60mph in the fours, and top 175mph all-out.

If a 510-horsepower engine developed with Ferrari is too much, don’t worry. Alfa is also offering a 280-horsepower 2.0-litre turbo four-cylinder and, later, a suitable range of turbodiesels. All will be paired with an eight-speed automatic gearbox. 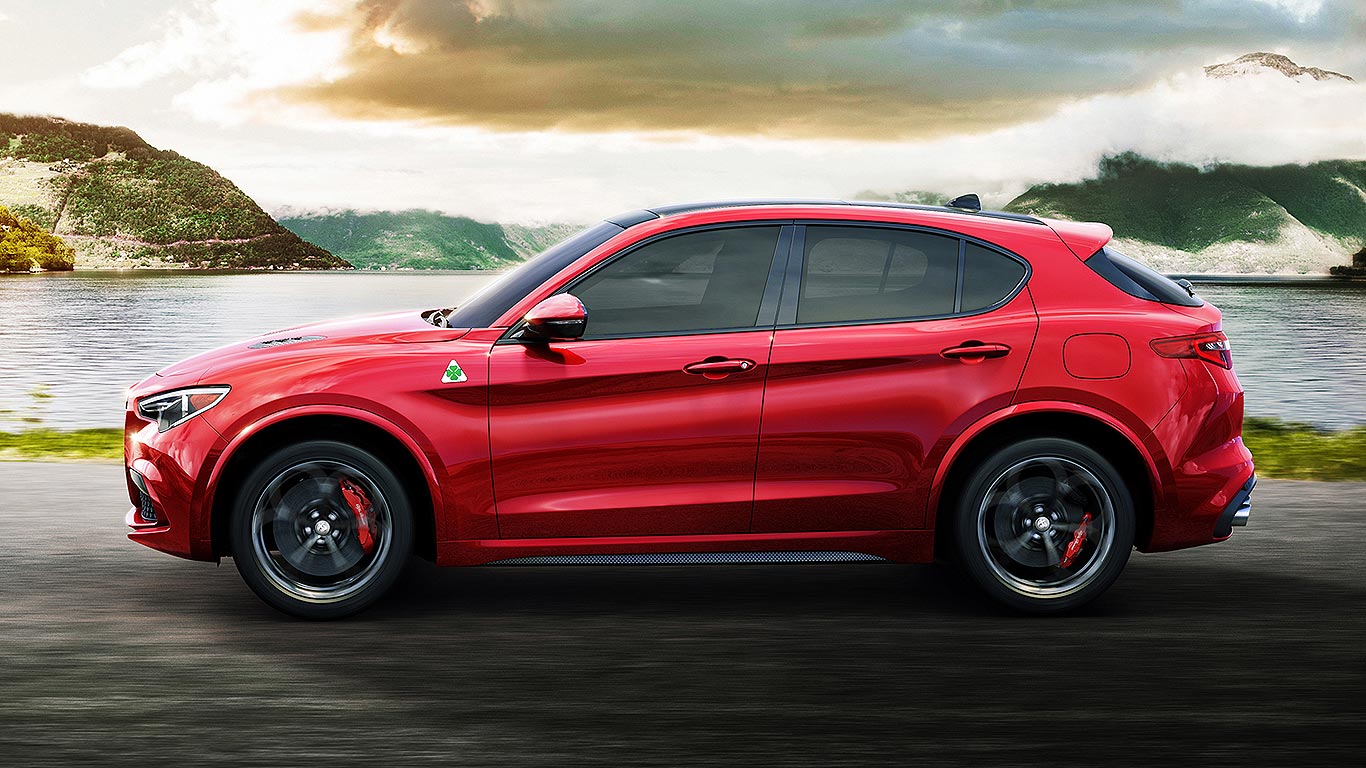 Of course, the Alfa Romeo Stelvio is all-wheel drive: the system is called Q4. But in normal driving, you’d never know it: 100% of drive is sent to the rear axle, to give it a suitably sporty feel. Only when the limits are reached is up to 50% of drive sent forwards. Response is rapid – indeed, the system even predicts loss of grip and will adjust drive before it actually happens.

Derived from the well-received Giulia saloon, the Stelvio has double wishbone front suspension and a patented ‘four-and-a-half’ link rear setup, called AlfaLink. Rear suspension innovation is where it’s at these days: also see Jaguar Integral Link. As for the steering, forget mud-plugging off-road stability – Alfa’s focused on maximising feel and feedback when cornering fast, by keeping loads on the tyres constant.

Active suspension, ESC and Q4 all-wheel drive are all coordinated by the Alfa Chassis Domain Control system. This adjusts the mapping in real time, says the firm, for super-fast adaptive changes during fast driving. Alfa Torque Vectoring is also combined with the Q4 system for the first time: clutches in the rear differential control individual drive delivery to each wheel. 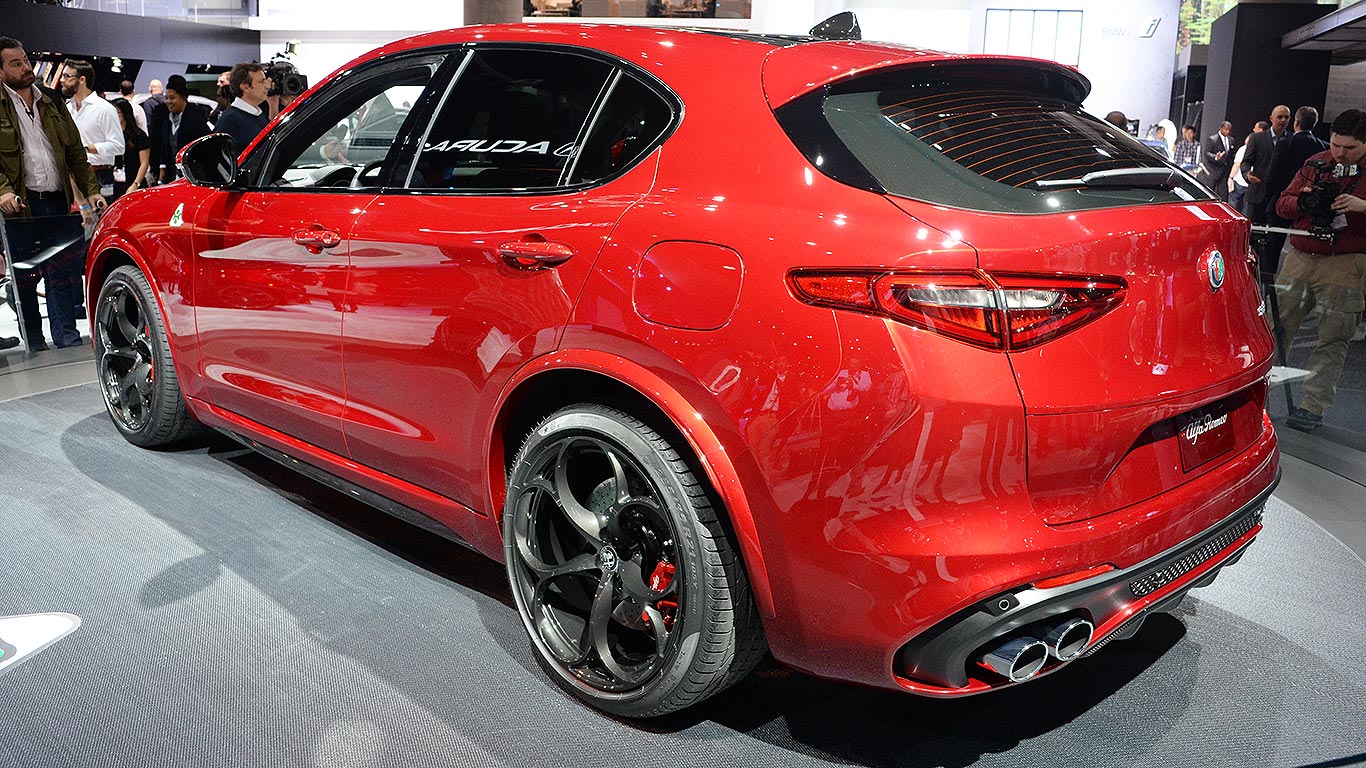 Brakes are more track-speck than trail-spec: on the Quadrifoglio, Alfa Romeo is fitting carbon-ceramic discs to the Stelvio. It also has the same Integrated Brake System as on the Giulia, which pairs electronic aids with a traditional servo, upping response and cutting stopping distances. It’ll need a good set of anchors if it’s to grab a hot Nürburgring lap time…

We don’t yet know how heavy the new Alfa Romeo Stelvio is, but the firm says it’s tried to make it as light as possible. There’s a carbon fibre driveshaft and the doors, wings, bonnet and tailgate are aluminium, as are the engines, suspension and brakes. All the heavy stuff has been centralised as much as possible. If you’re naming a car after the most famous sequence of corners in the world, you don’t want to make it a bit of a boat through them, do you?