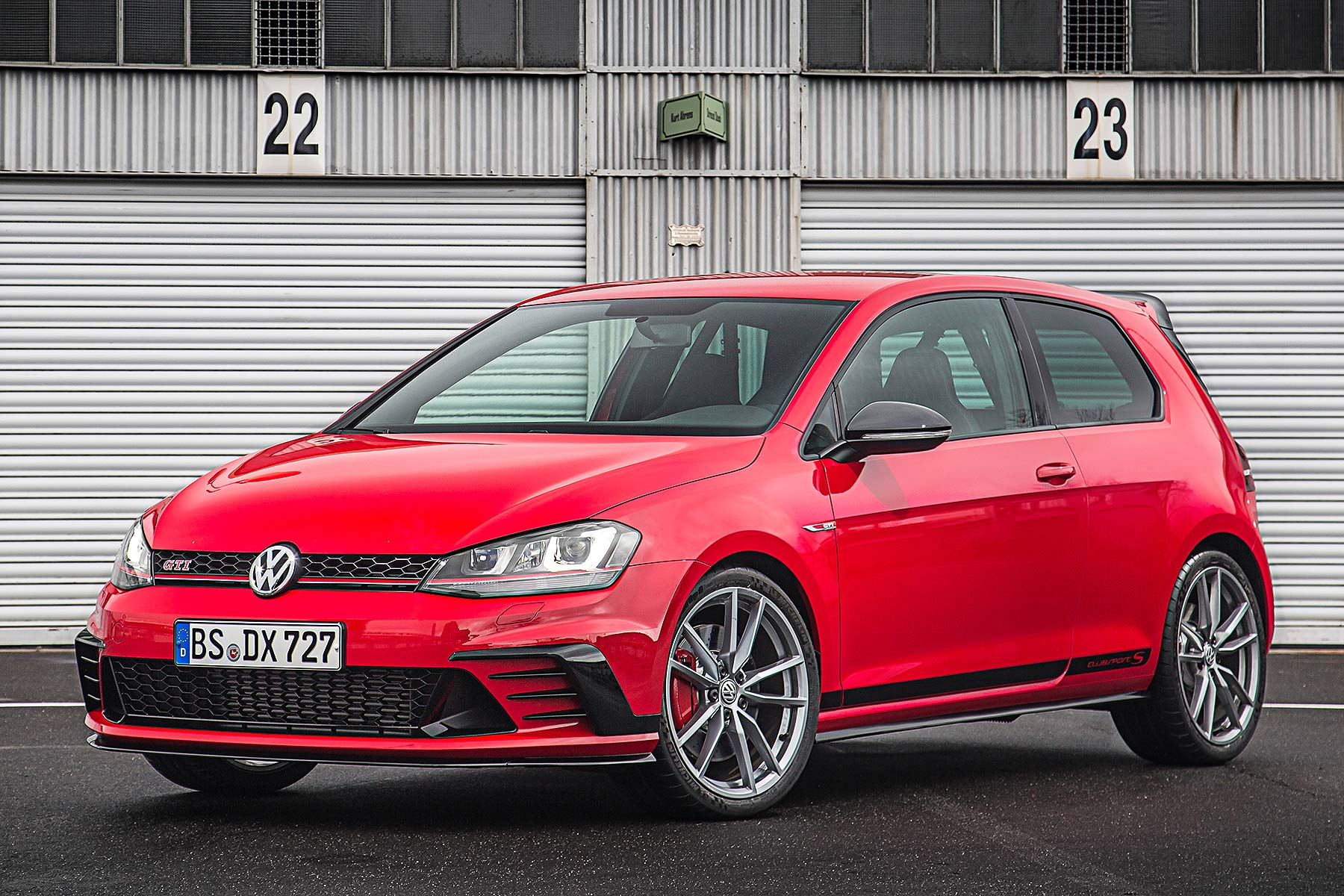 Volkswagen has released a limited edition Golf GTI Clubsport S to mark 40 years of the Golf GTI – and the lightweight 310hp special has already entered the record books by breaking the front-wheel drive production car lap record around the Nürburgring.

Limited to 400 individually-numbered cars, the new GTI Clubsport S is the most radical Golf GTI in four decades: it’s a two-door only, will only be offered with a six-speed manual gearbox, has no rear seats, no parcel shelf, less soundproofing, a lighter battery – all to save weight and go after a record lap time. 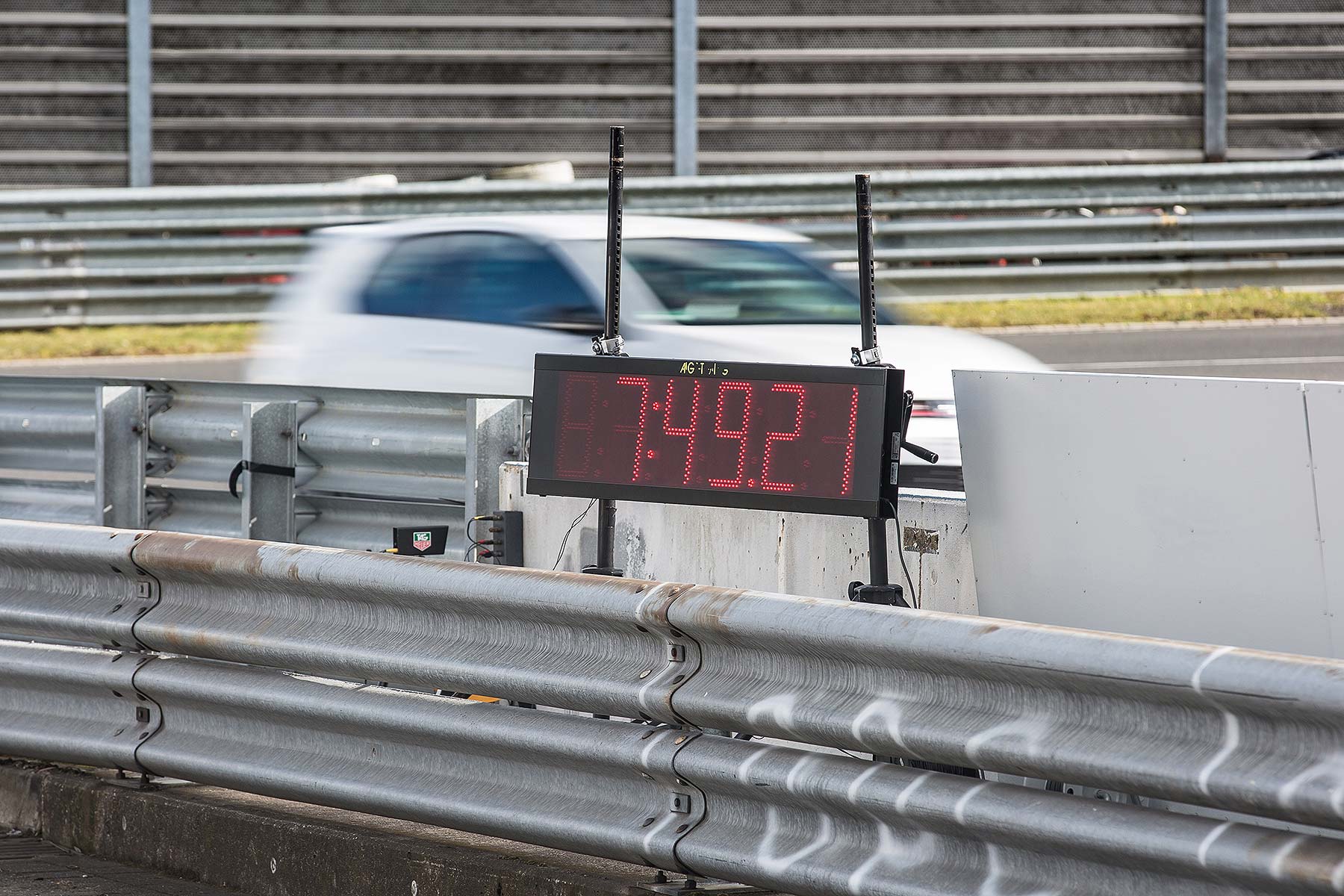 Rather fittingly, what’s now officially the fastest hot hatch around the Nürburgring is fitted with a special setting in the standard Dynamic Chassis Control driving profile selector – the Nurburgring setting in Individual model.

This mode accounts for the bumps of the Nürburgring with special damper settings, and also has dedicated engine, steering and sound settings: a new exhaust with bigger tail pipes adds to the effect with loud backfires under braking… 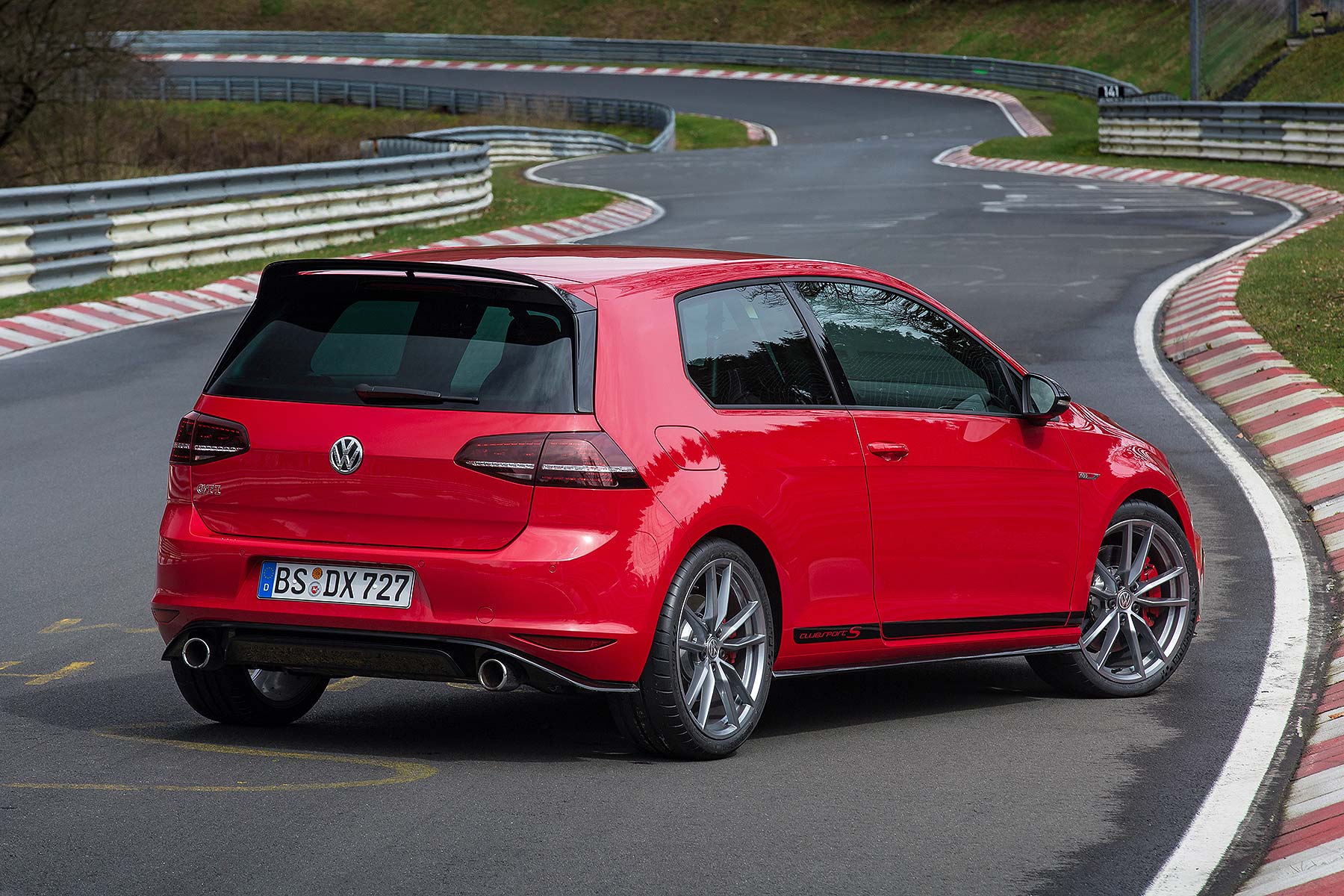 The Golf GTI Clubsport S sticks to the original colour palette of the original Golf GTI: red, white or black (red and white cars have a black roof). There are lower body decals, mimicking those on the original 1970s GTI. It also has 19-inch alloys with Michelin Sport Cup 2 semi-slick tyres, hiding 17-inch brakes with uprated brake discs and pads. The brake covers are aluminium, as is the front subframe. 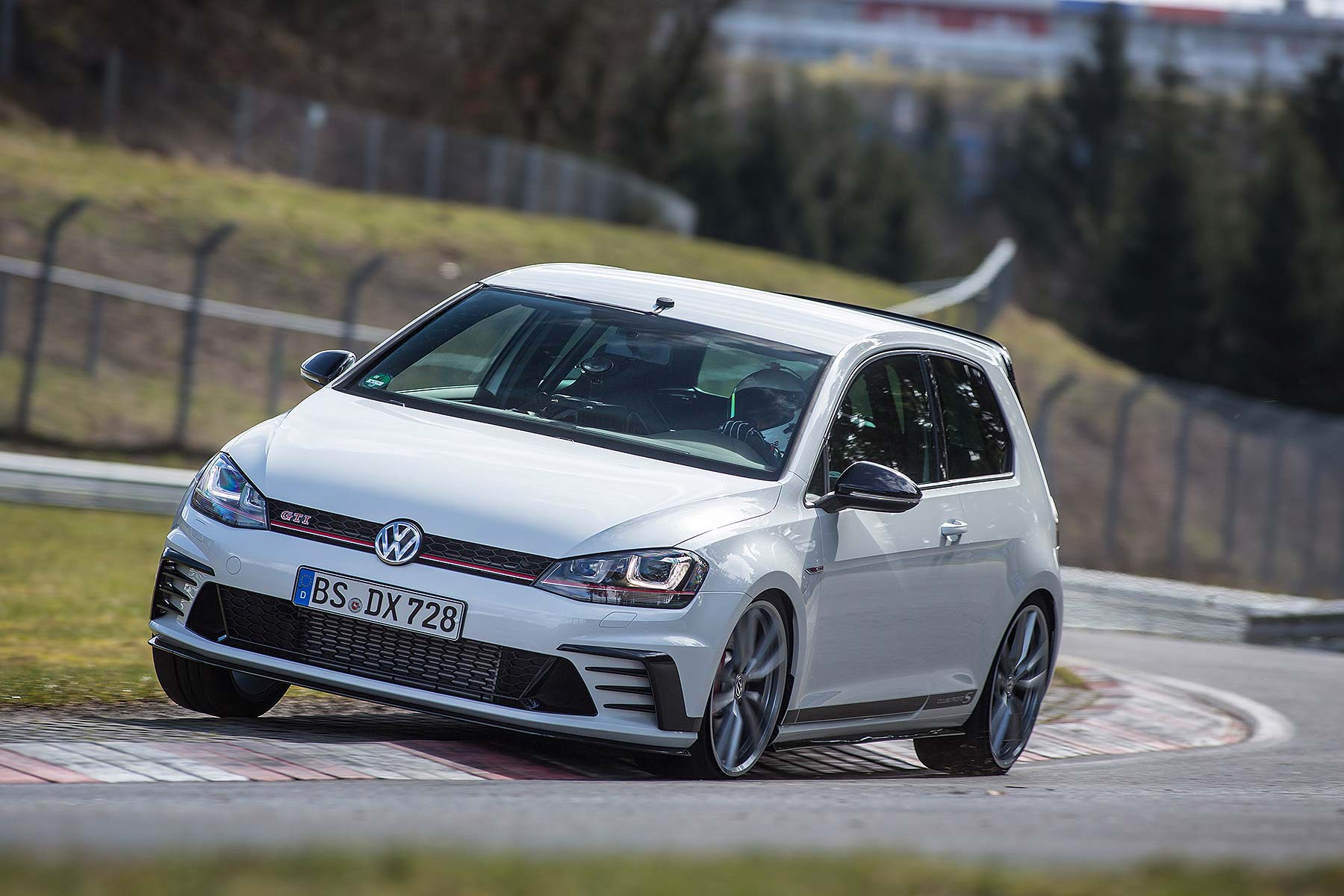 There’s a special traction control which both intervenes later and gives less of a cut in pulling power when it does: this helps reduce the ‘wheel hop’ of quick front-wheel drive cars being driven hard around challenging circuits, says Volkswagen. It’s also fitted stiffer engine mounts and engineers have reinforced both the transmission and the connection between gearbox and front axle. 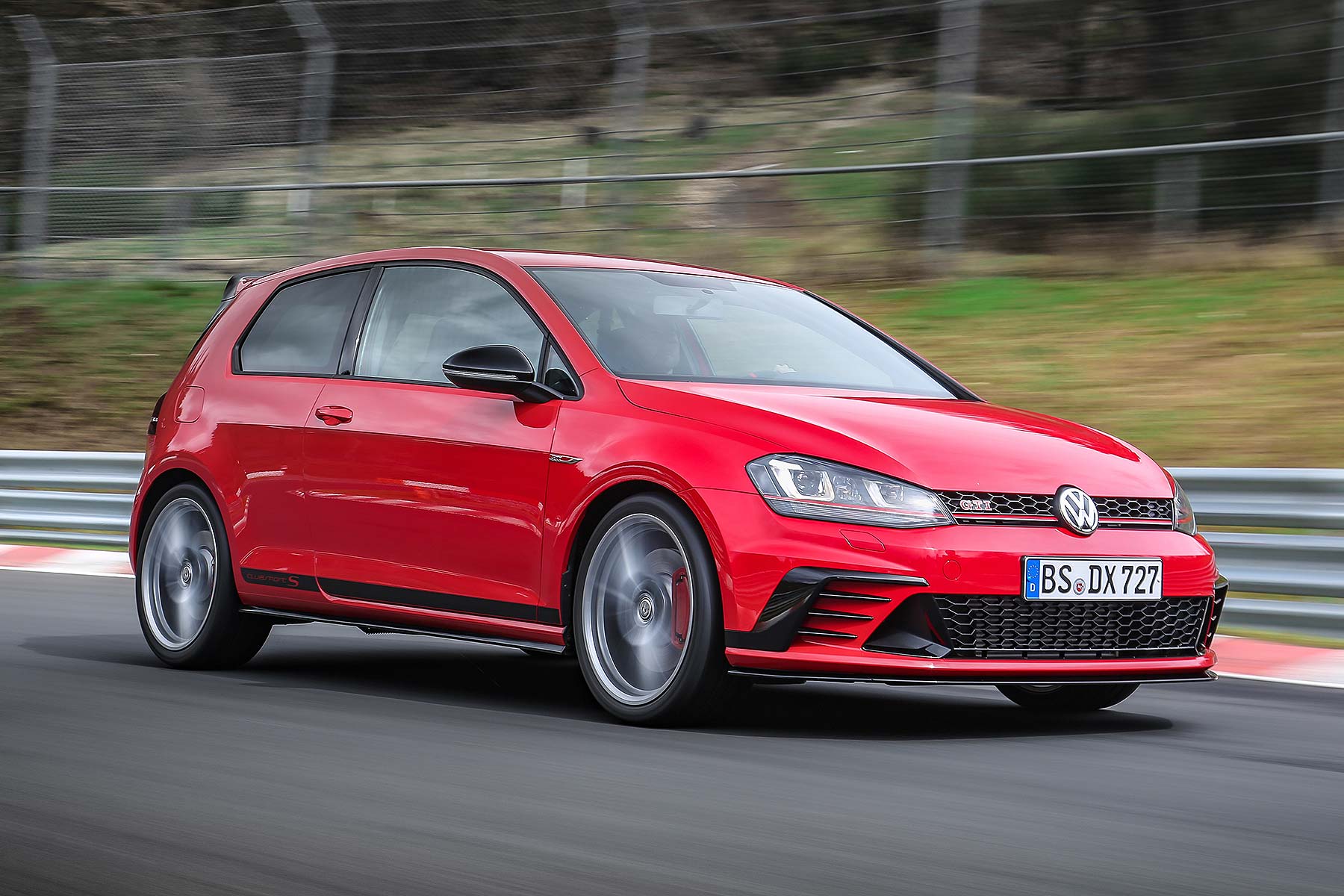 The individual numbering (001/400 to 400/400) sits on the front centre console there are GTI-branded bucket seats, Alcantara steering wheel with 12-o’clock marking – and, of course, the traditional Golf GTI golf ball gearknob.

The engine produces 310hp and 280lb ft of torque; it’s similar to the 330hp racing engine used in the new TCR touring car racing series. The EA888 engine, also used in both regular Golf GTI and Golf R, has special tuning, those bigger 65mm exhausts and a higher-output fuel pump.

Overall, the Golf GTI Clubsport S is 30kg lighter than a regular Golf GTI, tipping the scales at 1,360kg. 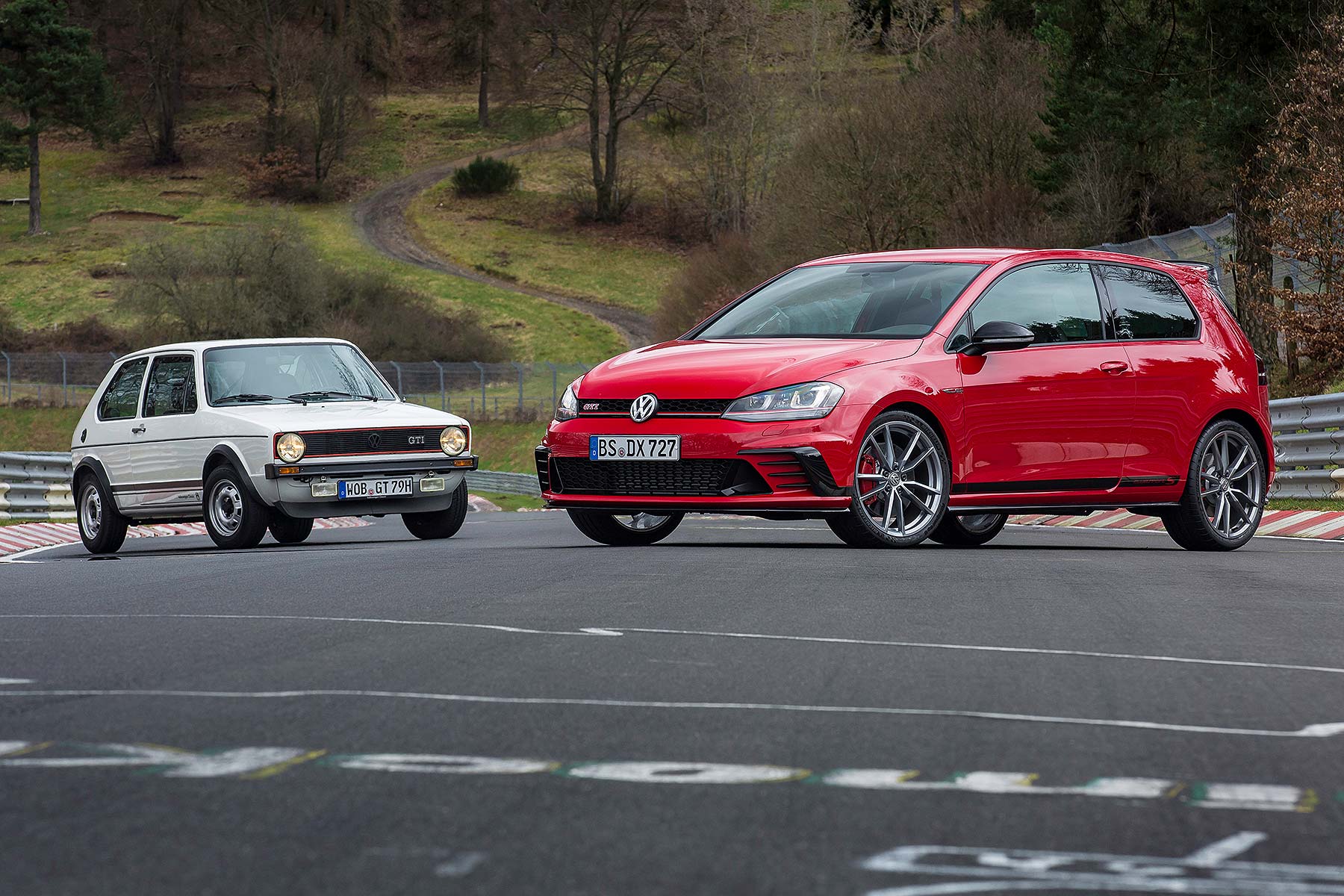 As for where the idea for the Golf GTI Clubsport S came from, over to head of chassis tuning Karsten Schebsdat: “It was obvious to all of us that this GTI had immense potential, so we decided to get the most performance possible out of this car.

“A small team went through the entire process, from bottom to top, pretty much like it was back when the first Golf GTI came into being.”

The team will now help showcase the new Golf GTI Clubsport S at the world-famous GTI event at Lake Wörthersee between 4-7 May.

How Ford helped put a man on the moon

As the world celebrates the fiftieth anniversary of man taking his first steps on the moon, car enthusiasts will be pleased to learn of the part Ford played
Read more

The Goodwood Festival of Speed is famed for gathering the latest and greatest supercars. The Apollo IE could be the one to top them all in 2018.
Read more

The new 2020 Nissan Juke is coming: everything we know

Nissan’s successful Juke crossover has been on sale since 2010 and is ripe for a replacement. Right on cue, one is due to be unveiled in less than a month.
Read more

...But it's not because they're worried about the environment
Read more

The 10 hottest new SUVs at the New York Auto Show

SUVs are in demand. We go in search of the best new metal on the show floor
Read more