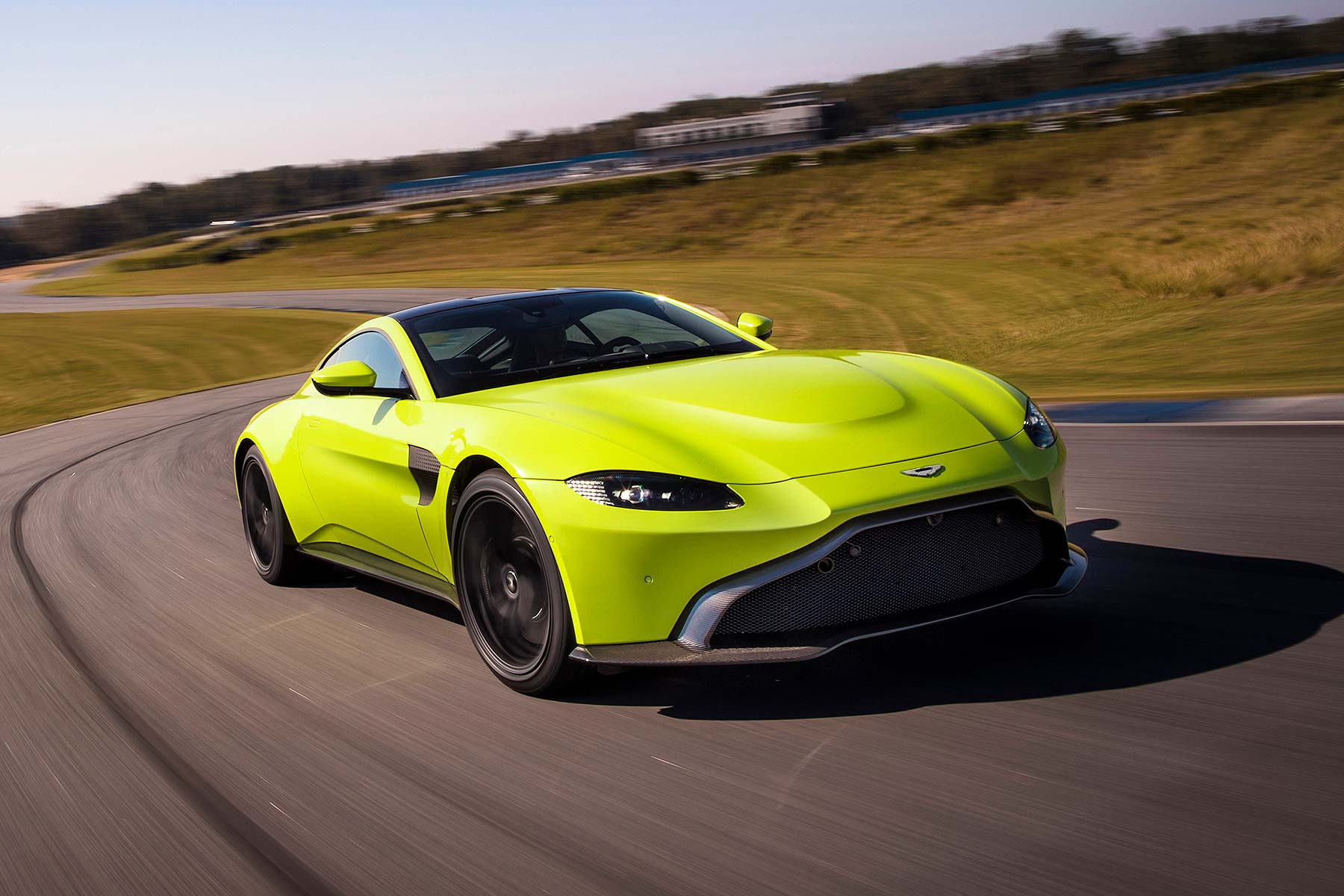 With the arrival of the new Aston Martin Vantage, the old ‘Russian Dolls’ approach to styling is consigned to history. From now on, all new Aston Martins will be distinct, and the firm is shouting about this in the most vivid and luminous way with the new Vantage’s dramatic ‘Lime Essence’ launch colour. Aston cherishes its cool understatedness but, just so often, you really do have to shout about things.

The new Vantage, finally replacing the previous 2005-era car, is an all-new car that’s derived from the same architecture as the breakthrough DB11, but boasts 70 percent bespoke parts. It’s a two-seat rival to the Porsche 911 Turbo and McLaren 570S, hits UK roads next spring, and is yours to order now from £120,900.

For the first time, the Vantage has a turbo engine. The 4.0-litre twin-turbo V8 produces 510hp and 505lb ft of torque. It makes this a 195mph Aston sports car, one capable of 0-62mph in a scant 3.6 seconds. The engine is sourced from Mercedes-AMG but it has fully bespoke Aston calibration, as does the eight-speed ZF automatic gearbox.

Aston also says a manual version will later follow – one likely to match the 911 in having seven gears.

For now, though, the engine isn’t the story. The design is. This radical new Aston, first teased by James Bond’s DB10, is a bold new sports car look that even goes so far as to eschew the traditional Aston grille. Instead, as a sign of intent, there’s a huge front splitter, inspired by the Vulcan, balanced at the rear by an enormous diffuser that looks to all intents like it’s come straight from a GTE racing car.

Aston boss Andy Palmer calls the new Vantage “our hunter”, one seeking a younger customer than the DB11 (and the old Vantage) through being more aggressive both in looks and drive. Design boss Marek Reichman underlines the newfound aggression: “this is our sports car – the successor to a Le Mans-winning race car.” It’s no coincidence that Aston is revealing the racing version of the Vantage on the same day as the road car.

The new car has a shorter nose and tail than the old one, and a longer wheelbase. “It’s the lowest nose ever on a front mid-engined car,” reckons Reichman. Unlike on the DB11 (and many rivals), there are also no visual aerodynamic features – “the body does all the work,” providing the perfect platform to make a racing car.

Aston stresses the elemental aspects of the new Vantage. The body is shorn of unnecessary addenda and lines – there aren’t even any bonnet vents, because it doesn’t need them. It’s defined by a single side shoulder line, which Reichman describes as being under tension, moving the car forward, like an arrow. Hard lines have been minimised; “it’s like the chassis is pushing itself out.” 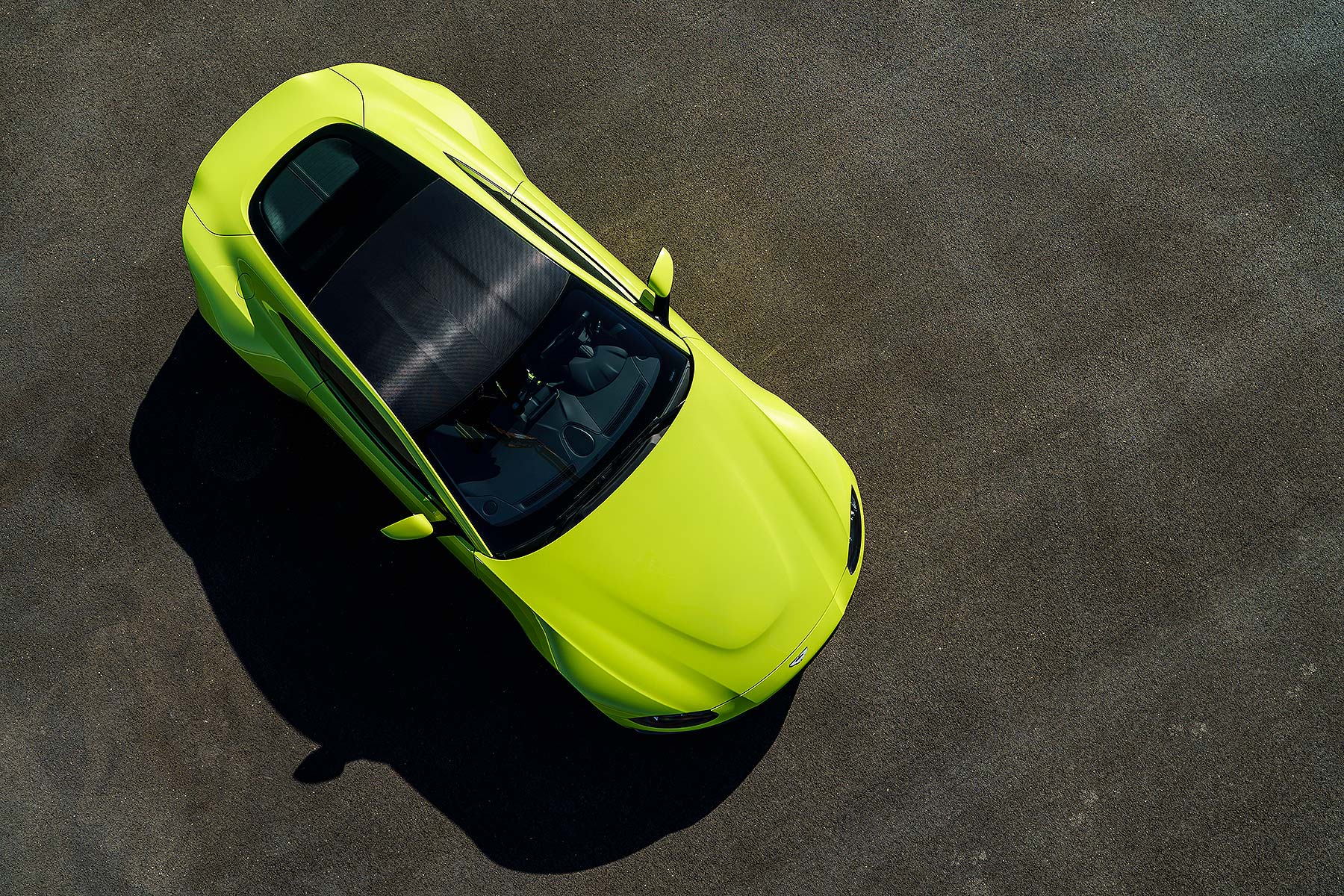 The dramatic simplicity is punctuated only by the rear, which “finishes with a flourish” thanks to the eye-catching light bar and amazing stand-proud rear diffuser. Reichman clarifies Palmer’s ‘hunter’ moniker – the Vantage is likely to be hunting down other cars, overtaking them, so the firm’s given a visual treat to those being overtaken with a dramatic rear. “This is the bit everyone will see…”

It has a driver-focused interior, one again completely different to the DB11 – even down to the overall architecture. Instead of a ‘waterfall’ centre console, it’s shorter, with space clearly left for that upcoming manual gearlever. Touch-sensitive ‘haptic’ controls have also been replaced by proper buttons with proper, defined ‘clicks’, presumably at no small expense: such is the intent Aston has to differentiate all its cars. “We’re not making Russian Dolls anymore,” stresses Palmer. 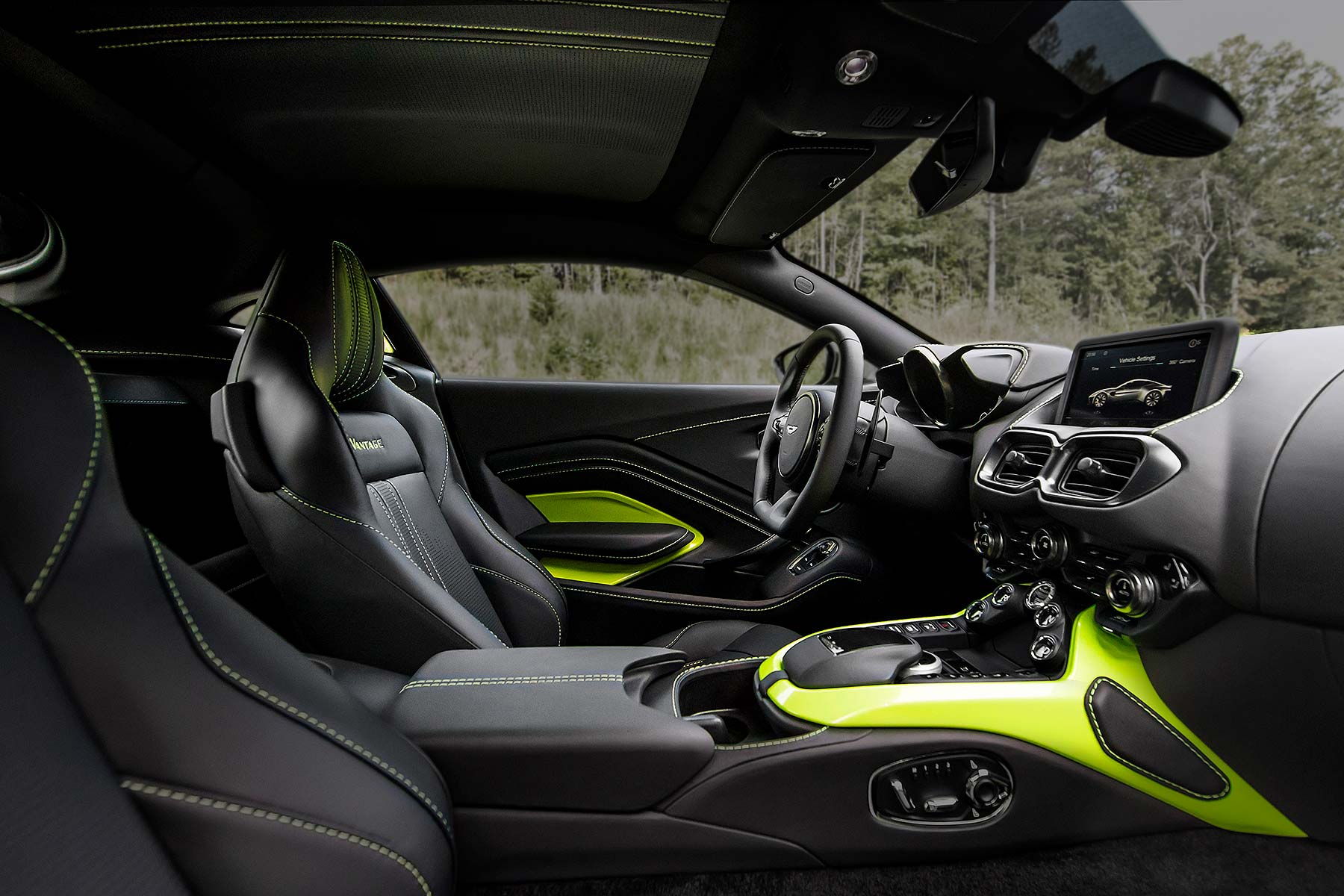 It’s an exciting place to sit, packed with sporty-feel details like cowled dials, kneepads on the centre console, lightweight leather door-pull straps instead of cumbersome handles. Attention to detail is exquisite and it’s spacious too – there’s a 350-litre boot behind the front seats, which you can access through the cabin via a handy shelf. A Volkswagen Golf only has 30 litres’ more space; that’s how roomy the new Vantage is. The latest Mercedes-Benz electronics also give Vantage customers modern-era infotainment and functionality, at last.

It will drive as well as it looks, promises chief technical officer Max Szwaj. Despite the bonded aluminium architecture evolving from the DB11, it’s been tuned from the ground up as a Vantage, even down to getting bespoke Pirelli tyres. This is the first Aston to be fully developed under the guidance of dynamics guru Matt Becker, formerly of Lotus. Expectations are sky-high: it’s already impressed Red Bull Racing F1 driver Max Verstappen.

The new Vantage has Aston Martin’s first-ever electronic rear differential. The e-diff reacts in milliseconds, giving more precise control over the car’s handling. “It feels more dynamic, gives faster steering, less understeer,” says Szwaj. Even compared to the DB11 V8, it has a totally different character, he says – and with weight from 1,530kg and the boast of overall length being 34mm shorter than a 911 (and 284mm shorter than a DB11), it’s clear which car Aston has in its target.

Palmer calls the new Vantage “a true sports car… (this) is the Aston Martin pure driving machine enthusiasts have bene waiting for. I’m enormously excited by what we’ve created: a new Vantage that’s more explicit in looks and intent, wrapping heart-pounding performance and dazzling dynamics into an everyday, usable package.”

One more thing: the noise. Szwaj promises us it’s going to be stunning. And nothing like a Mercedes-AMG V8. “We have given it an entirely new spectrum, matching it with the noise cues that will be familiar to Aston Martin customers. It sounds amazing.” We can’t wait to hear more: because right now, the 2018 Aston Martin Vantage sounds like it could be one of THE new cars of 2018.

Opinion: ‘I can’t wait to drive the new Vantage’

For seven weeks, potential customers have been seeing the new Vantage in secret at Aston Martin’s Gaydon HQ. The vast majority of them have subsequently signed up to buy one: having seen it myself, it’s not hard to see why.

There’s no greater signifier that the Russian Doll era is over than this new sports car. It’s more compact than the new DB11, sharper, more purposeful, much more focused. A huge stride on from the old Vantage. With its DB10 cues and dramatic Vulcan front end, adorned not with a grille but a full explosion of race-style aero, it’s little short of stunning.

The interior is gorgeous, more tactile and hands-on than the DB11, and again impeccably finished to the highest standards. It feels good to sit in, with nice, low, cosseting seats, an exciting-looking cabin, racy new steering wheel, paddleshifters that you can reach even with more than a dab of oppo on; even the ‘click’ of the paddles has been tightened up over the DB11.

From £120k, it’s not quite as cheap as it was; it’s going up against the Porsche 911 Turbo, but seems a bargain alongside the McLaren 570S. It’s immediately clear what the extra is buying you, though. This is perhaps the sportiest real-world Aston sports car ever, and if the firm’s promise it’s as good to drive as it is to look at is true, it’s all set to be a landmark.

I can’t wait to discover more…