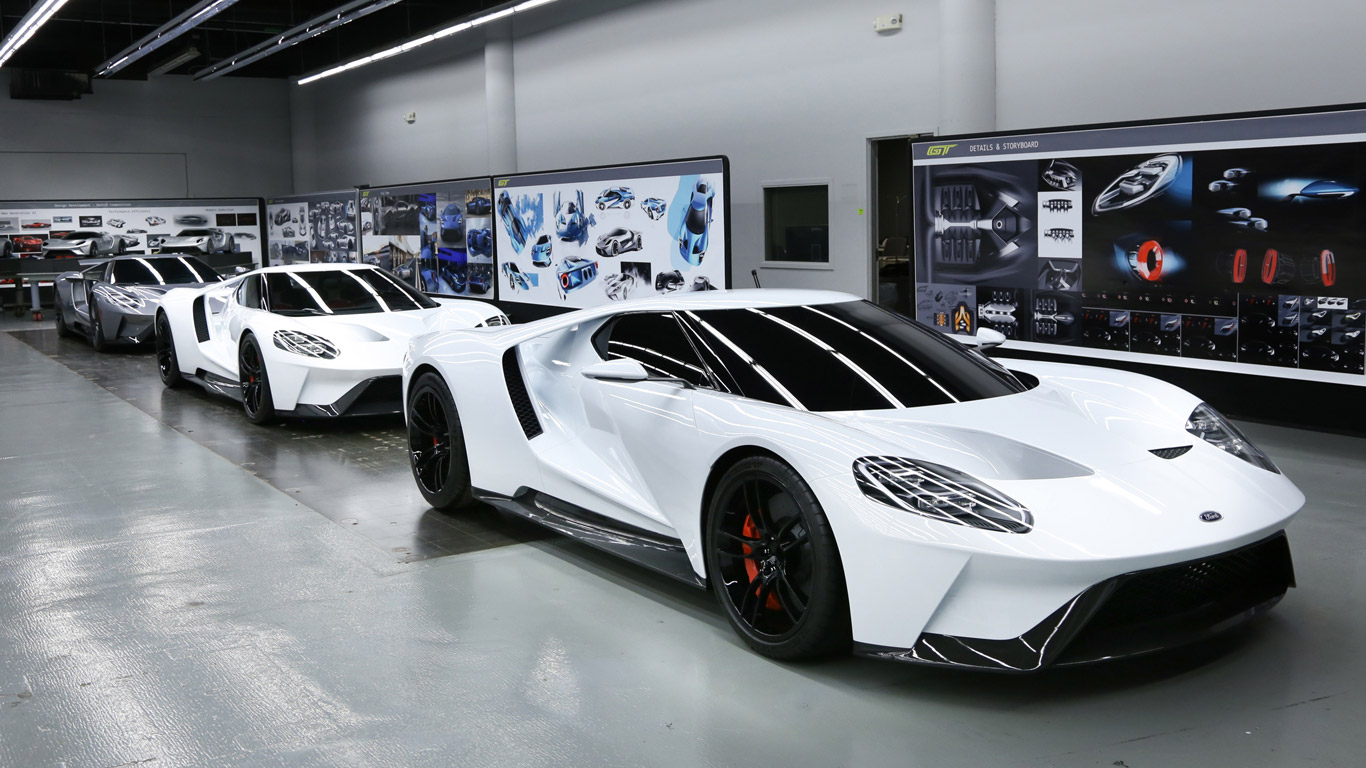 2017’s must-have supercar was revealed at the 2015 Detroit Auto Show, after years of hard work by a small group of Ford employees at the firm’s Dearborn design centre in Michigan. While it might look like the new GT was the work of a futuristic design studio, all the design work was carried out by in a top secret basement studio.

Most employees at Dearborn knew nothing about the project. While they were upstairs working on designs for the new Edge or Fusion, a small group in the basement were sketching Ford’s Lamborghini-rivalling supercar.

Before we take a look at the design studio, let’s look at some stats and figure out why the Ford GT is such a big deal. It costs £450,000 and only 1,000 will be made – with just 40 coming to the UK. All the cars have already been allocated – Ford has been very strict about the application process, meaning only genuine fans will be getting their hands on the GT.

Officially, the Ford GT hits 60mph in 2.8 seconds and can reach a top speed of 216mph. That puts it on par with McLaren’s incredible 720S.

So that design studio? We visited Dearborn, where we were met by Ford’s design director for the Americas, Chris Svensson. Following Svensson down a staircase and through a series of passages, you could see the excitement of someone who has spent a great deal of time locked in a basement, keen to show off his lair.

How did it remain a secret for so long? Surely other people suspected it? “Fortunately no one really asked what I was working on,” says Svensson. “Most people in the building didn’t know until it was unveiled at Detroit.”

Svensson stops by what appears to be a broom cupboard. He produces a key from his pocket – “old school,” he quips, and opens the door.

Behind it, we’re in for a treat. While the room itself is nothing particularly special, its contents are guaranteed to get any petrolhead excited.

From mock-ups to the final car, it’s fascinating to see how the design has progressed.

Not that it’s changed a lot. Compare the final design with an early clay model, and it’s clear that very little has been altered. That’s down to the team largely being able to do their own thing – the performance team have been hands on from day one, while accountants have been kept well away.

The car is being launched to commemorate the 50th anniversary since Ford’s Le Mans win with the original GT40, and is set to run in this year’s Le Mans 24 Hours race.

So why is it using a 3.5-litre V6 Ecoboost engine, rather than a bulky V8, if economics aren’t in mind? Surely a throaty V8 would be more in-keeping with both the Le Mans spirit as well as the GT ethos.

Ford Performance chief engineer Jamal Hameedi disagrees: “Le Mans is very much a full economy race. Ecoboost technology makes it extremely fuel efficient. If the other guys want to haul around two cylinders not doing anything, then go ahead, but a six cylinder is all we need.” 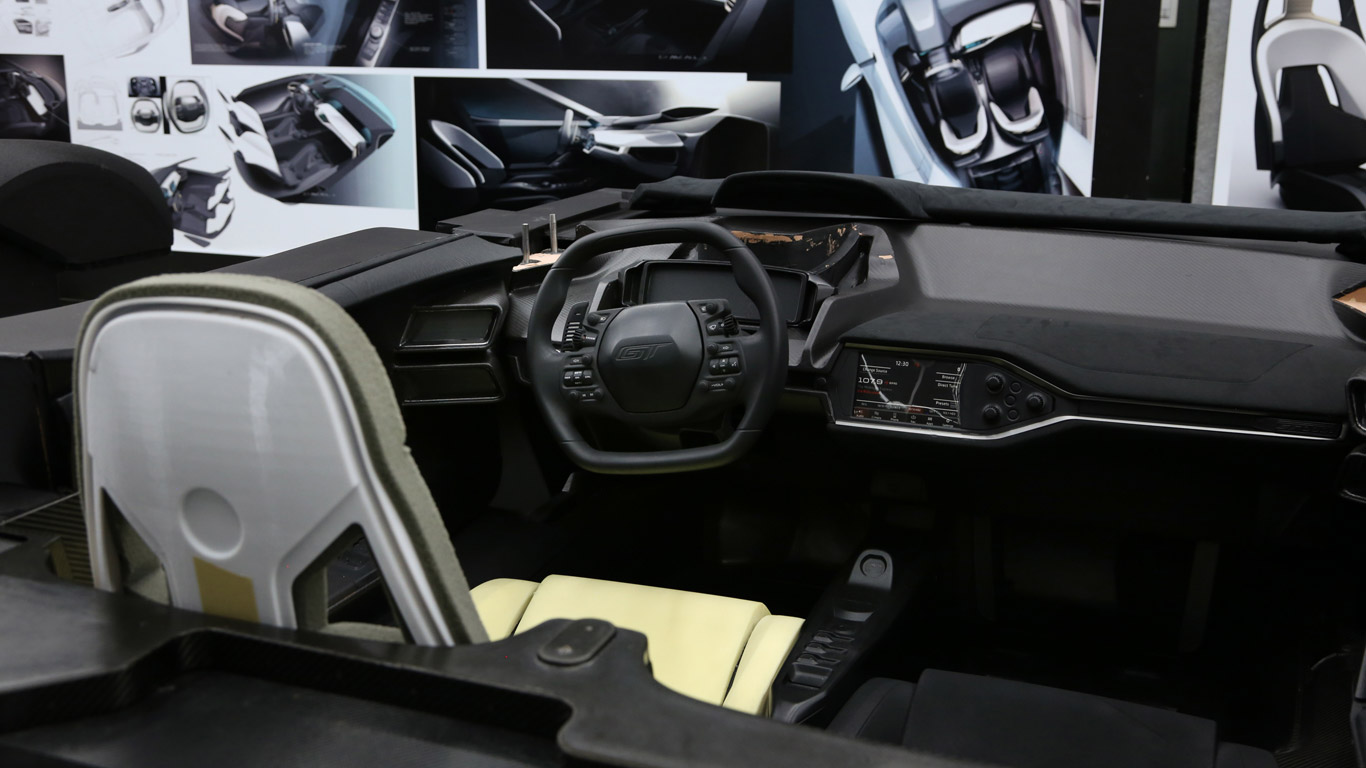 One challenge they did face was the interior. With such a small area to play around with, how could they fit something suitable for a £450,000 supercar into such a tiny space?

The man responsible for that was global interior design director, Amko Leenarts. He explains that comfort wasn’t a priority – anyone much taller than six foot is going to struggle, and don’t expect to be able to carry golf clubs.

Working with such a tiny space created numerous issues. Fitting rails under the seats to allow them to move back and forth would take up much-needed headroom, so it was decided to keep the seat fixed. Instead, the steering wheel and even the pedals move towards the driver.

There wasn’t even room for a conventional steering wheel. It would be impossible to get in the Ford GT with a full-size wheel, so a small wheel was used with the top and bottom cut off.

While obviously designed without luxury in mind, Leenarts has done an incredible job on the interior. Like everyone involved, he’s rightly proud of it.

The Ford GT is different to anything else the manufacturer makes – it’s a real labour of love, designed with nothing but performance in mind. And the experts in charge of the project? Absolute enthusiasts. And that’s refreshing. Please keep clicking to see more pictures of the Ford GT design studio.