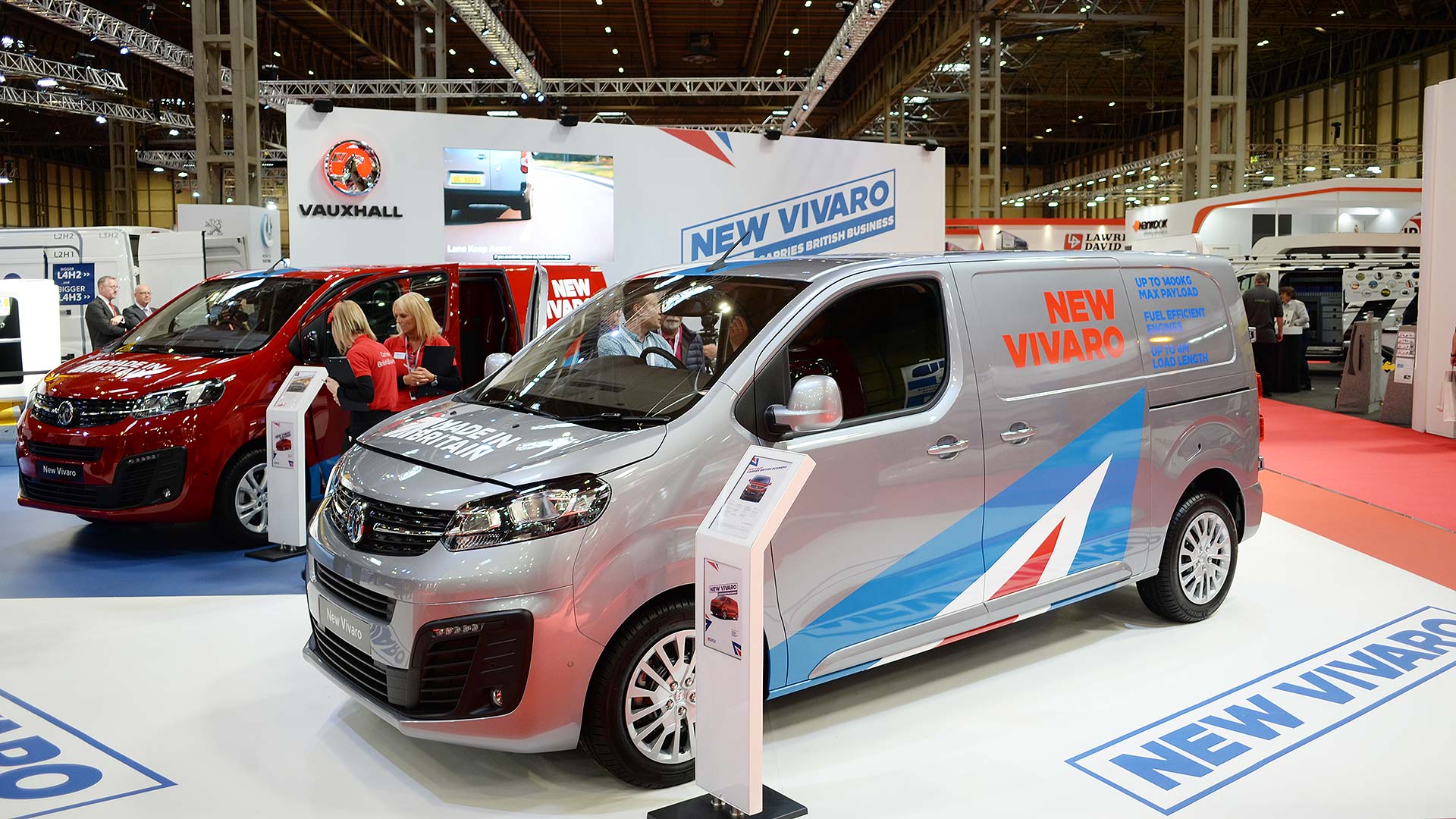 While the British new car market is in the doldrums, our appetite for vans is much healthier. In a decade, the UK van fleet has grown 50 percent – twice the growth rate of cars – and the market for brand new commercial vehicles is now worth £10 billion a year.

Which means the annual Commercial Vehicle Show (CV Show) at Birmingham’s NEC is a big deal. Particularly as many brands used the 2019 show to reveal their latest vans – with the headline-grabbing draw being the world debut of the Ford Transit-rivalling, British-built Vauxhall Vivaro. 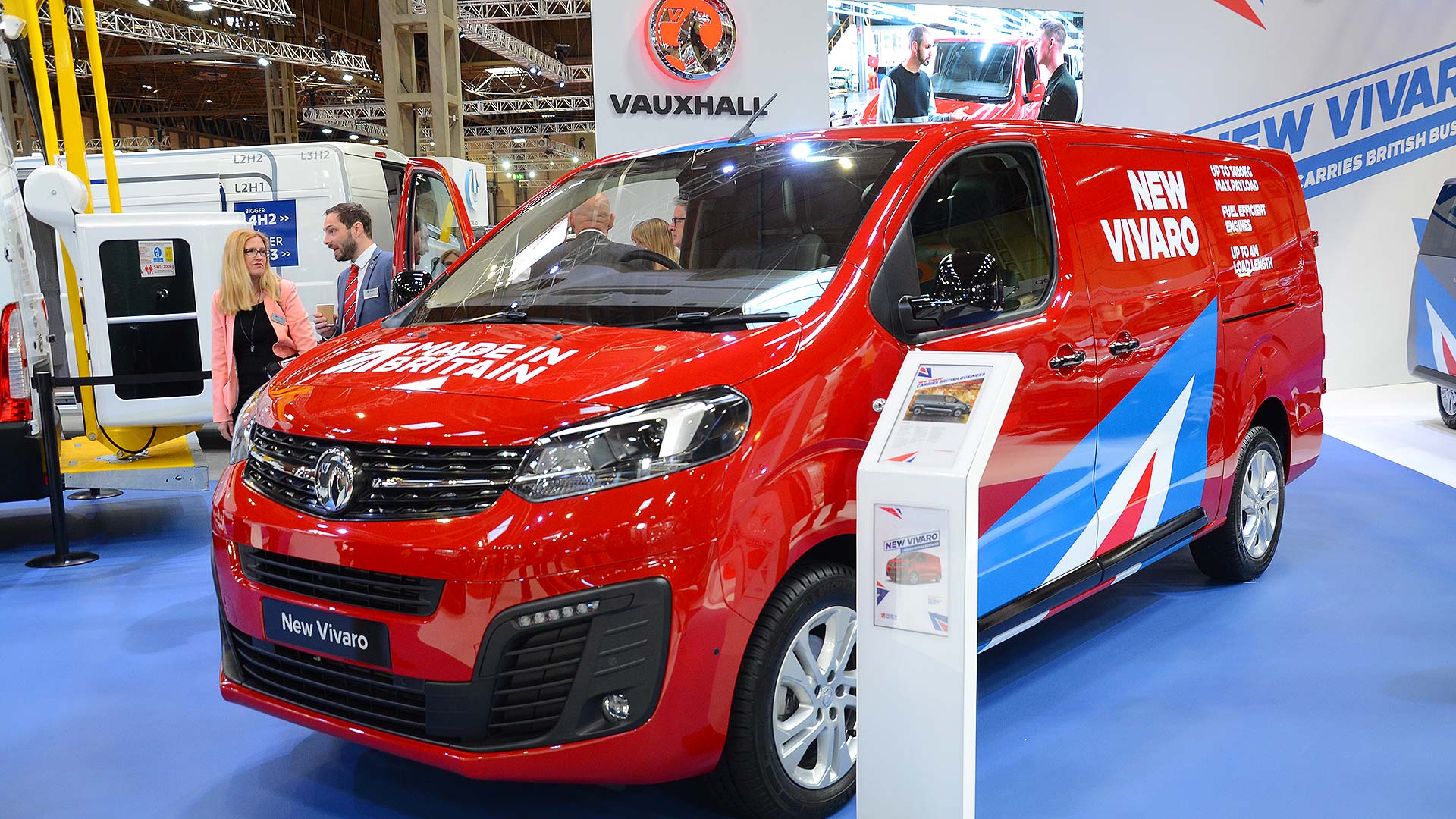 The new Vauxhall Vivaro is the result of a £100 million investment into the firm’s Luton plant. 1,250 jobs have been secured and the target is to build 100,000 a year, including a fully electric version that arrives in 2020. Vauxhall chief Stephen Norman was on hand to debut the new Vivaro, and was full of facts: the entry-level 100 horsepower model emits 22 percent less CO2 than a comparable Ford Transit, for example. The 120 horsepower version puts out 27 percent less CO2 than its arch-rival. And it can take loads 21 percent longer than the Ford. No guessing which rival Vauxhall’s targeting – nor how bullish it is as to its chances… 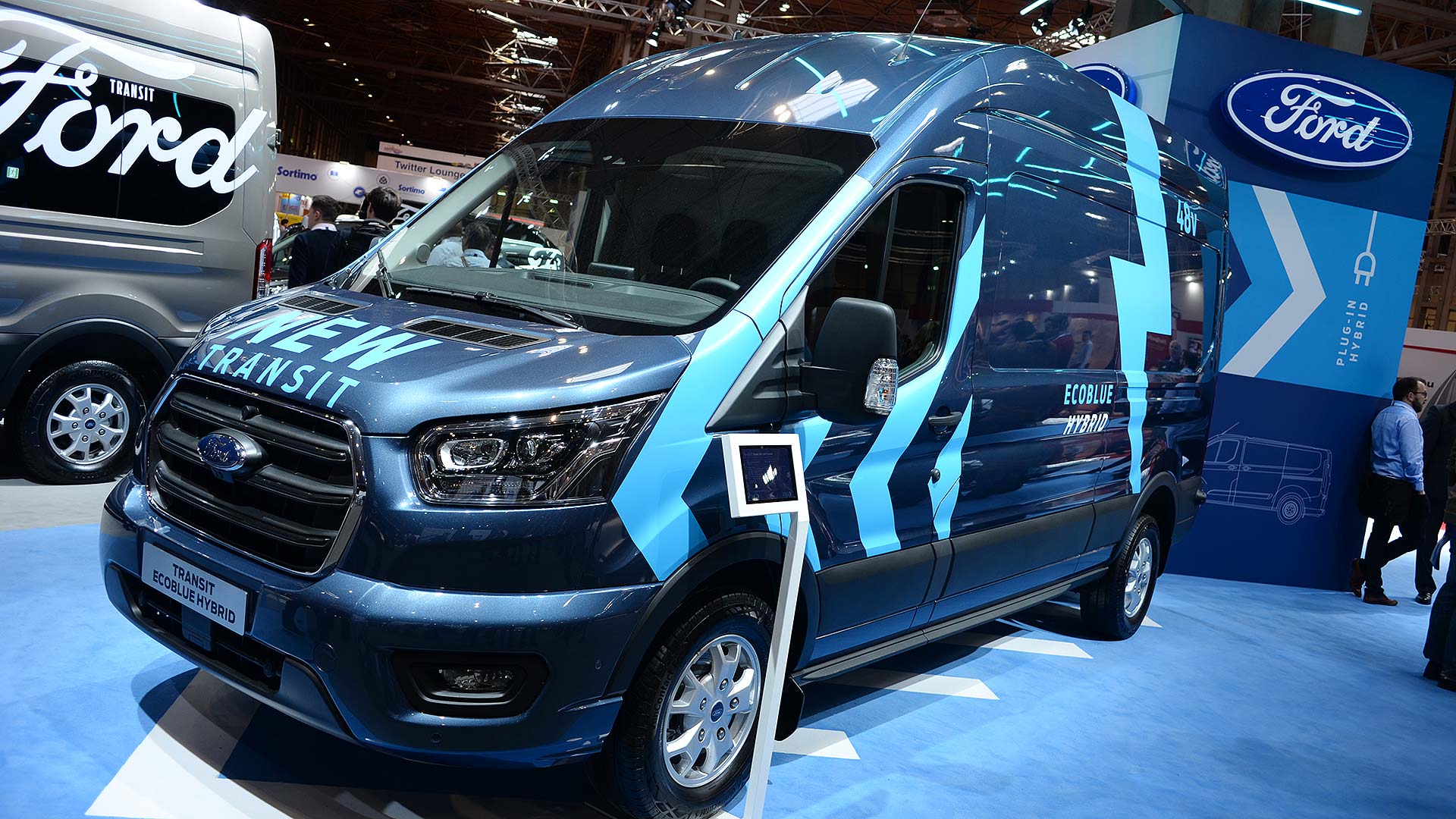 Ford isn’t standing still, though. It will update the market-leading Transit in mid-2019 with a series of tweaks that save weight and allow it to carry up to 80 kg more load. These include an aluminium bonnet – normally a feature of exotic supercars – CAD-designed wheels and a composite bulkhead. The new EcoBlue Hybrid is the van sector’s first 48V mild hybrid, with CO2 emissions from 144 g/km, and even the regular EcoBlue diesel is seven percent more economical. Ford says it all results in the “smartest and most productive Transit ever”. 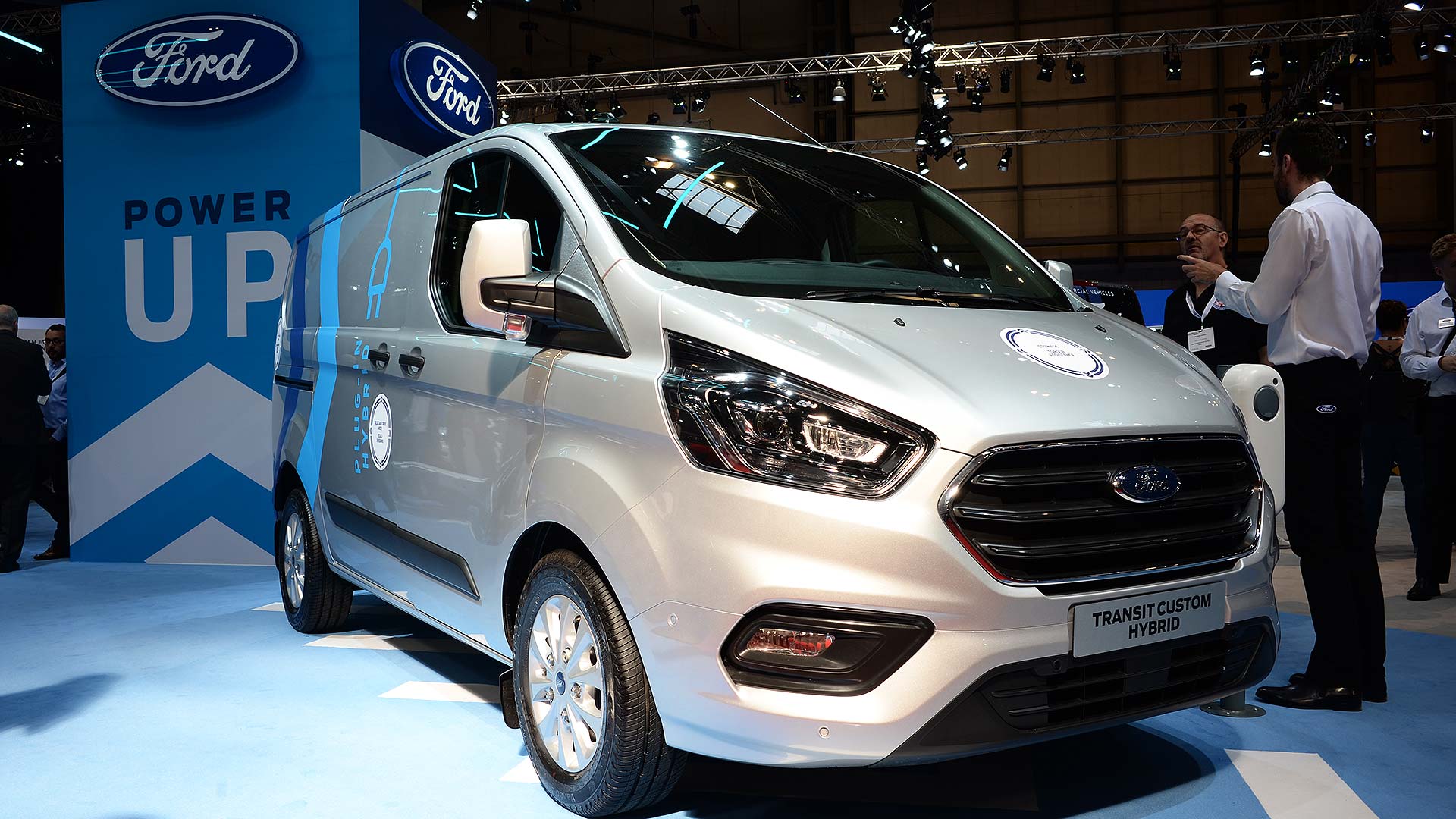 After several years of trials in London, the production version of the Ford Transit Custom Plug-In Hybrid also goes on sale at the end of 2019. It has a 30-mile electric range and a tiny 1.0-litre Ecoboost petrol engine to extend range further. Ford is also promising a fully electric Transit in 2021, to take on the 2020 Vauxhall Vivaro EV. 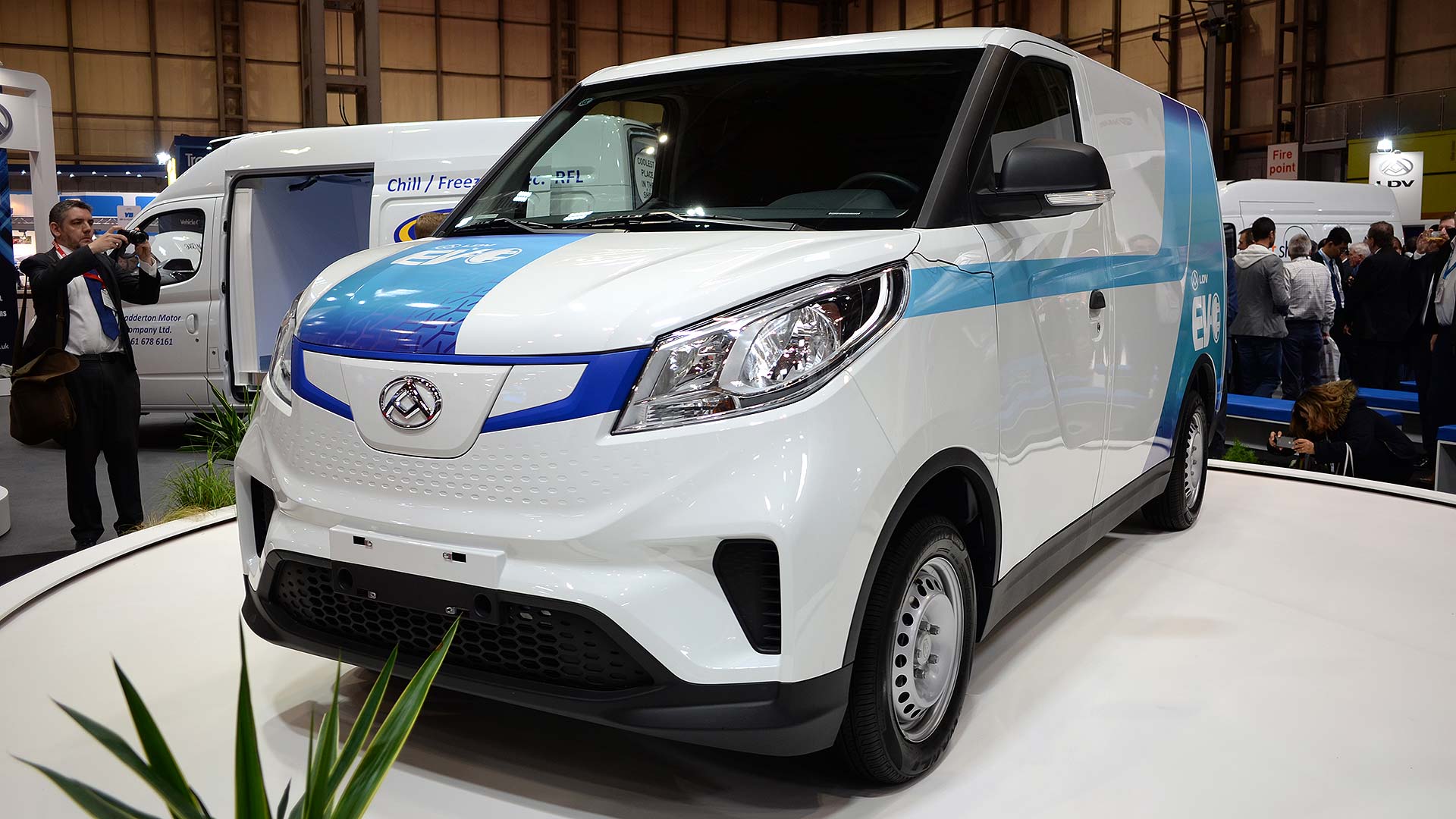 At the value end of the new van sector, the LDV EV30 electric van was revealed at the 2019 CV Show. It is effectively a more affordable Chinese rival to the Nissan e-NV200 – the industry knows vans will have to go electric as soon as possible, to bypass ever-stricter city centre emissions limits. It will go on sale in 2020, with prices expected to start from £22,000.

Two bodystyles will be offered, a short-wheelbase and long-wheelbase, and there will be two battery options: 35 kWh (with a 127 mile range) and 53 kWh (offering a 200 mile range). Both will use a 114 horsepower electric motor, and total payload ranges from 600 kg to 1 tonne. 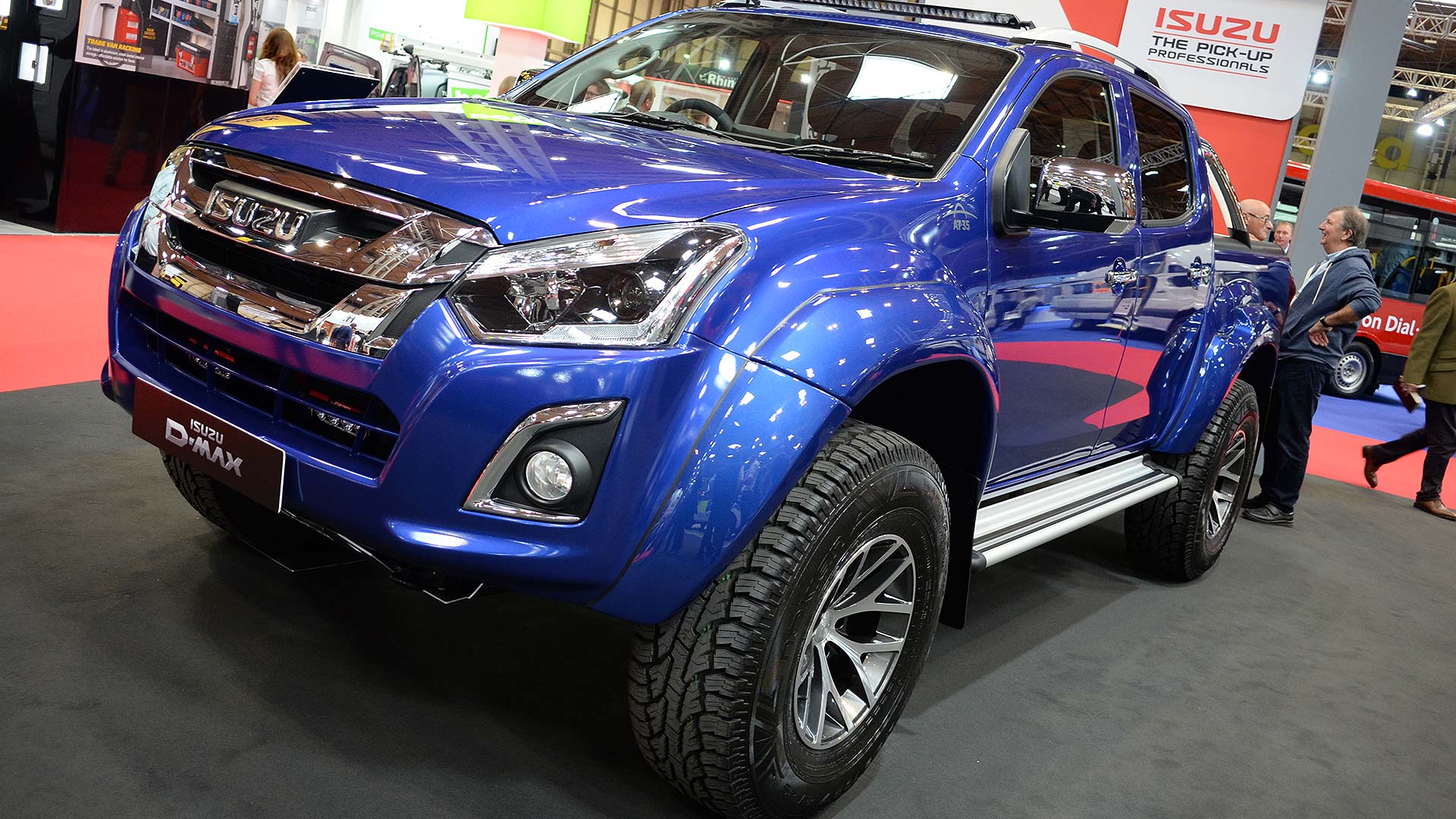 The British pickup truck sector is a particular hot spot in the market right now – and several brands had new variants to show. Isuzu’s successful partnership with Arctic Trucks continues with the special edition AT35 Safir. Just 10 will be sold, each costing a cool £45,000. They’ll all be individually numbered, and each will be painted in Sapphire Blue Mica. Bright Lazer Lights in the bumper are complemented by a new roof-mounted light bar, alloy wheels are diamond-cut and, inside, leather seats and premium audio with subwoofer and a 9-inch touchscreen are fitted. 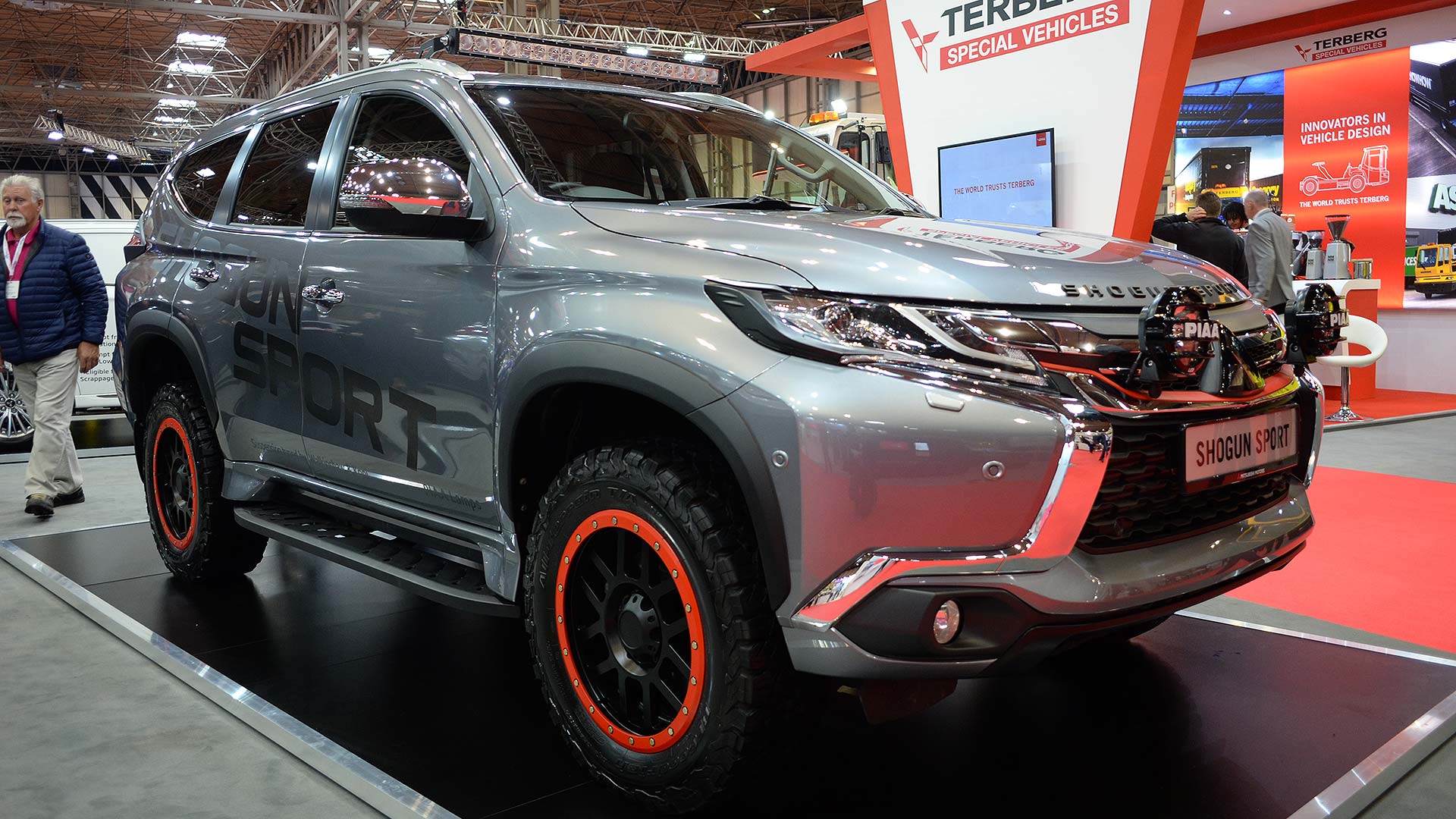 Mitsubishi showed a Shogun Sport concept at the 2019 CV Show, called SVP. It’s going to launch it in the summer – its show stand appearance was to get feedback from customers about what should be standard. The concept has black 18-inch wheels and BF Goodrich all-terrain tyres; they’re so chunky, the track is 40 mm wider and the wheelarches have been extended to suit. There’s also an LED light bar on the roof, PIAA rally driving lamps, black decals and badges set off by red detailing and, inside, leather seats and red LED mood lighting. We also like the sound of the Walkinshaw Performance Limited and Koni tuned suspension. Can we have it all please, Mitsubishi? 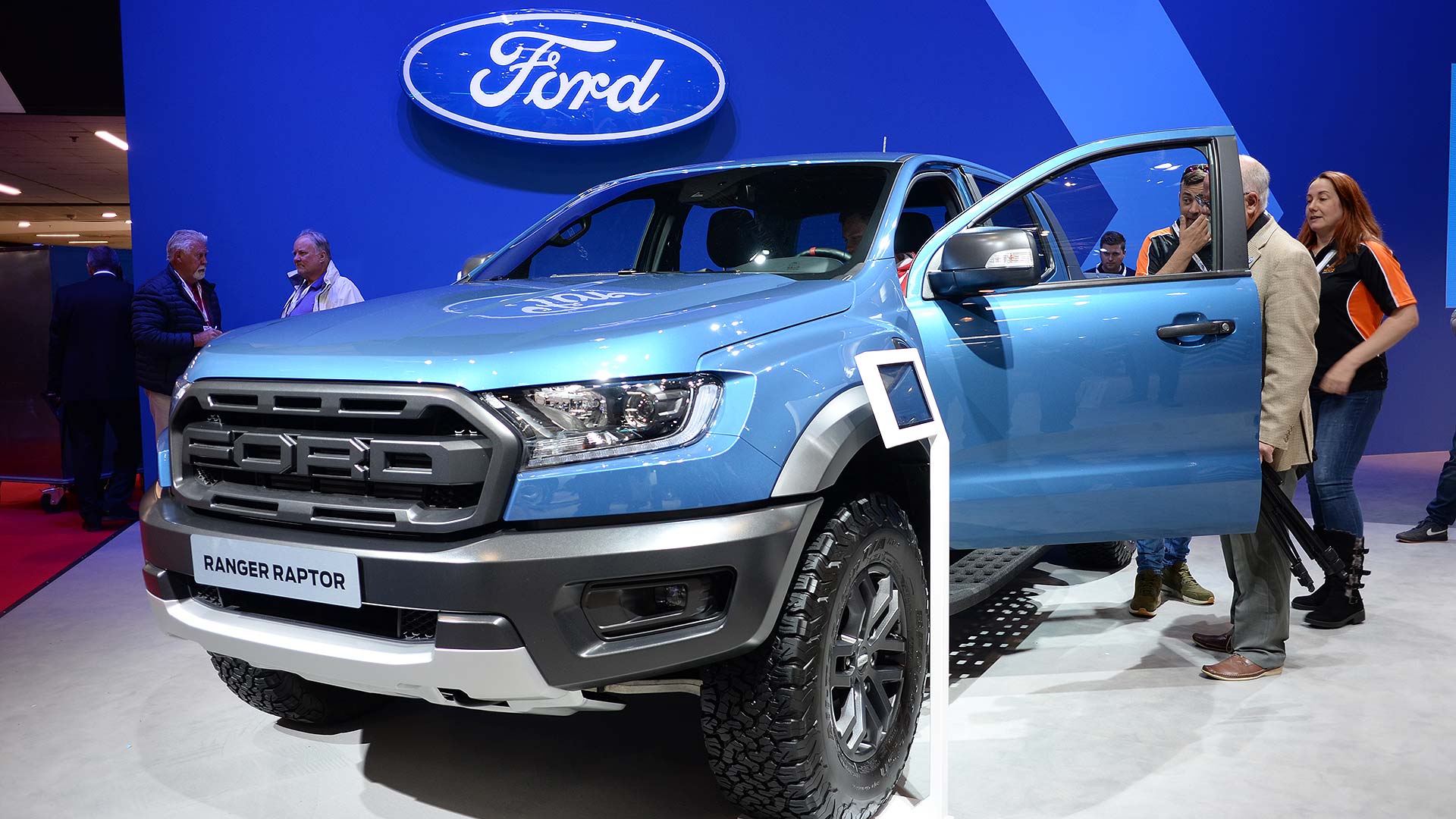 The Shogun Sport SVP will need to be tasty if it’s to take on Ford’s mighty Ranger Raptor. Described as a factory-built high-performance off-road truck, it has Fox Pro tuned suspension, multiple driving modes, a 210 horsepower 2.0-litre diesel engine and 10-speed automatic gearbox. It’s the styling both outside and in that really sets it apart, though – as it should, with prices starting from £40,696, plus VAT. 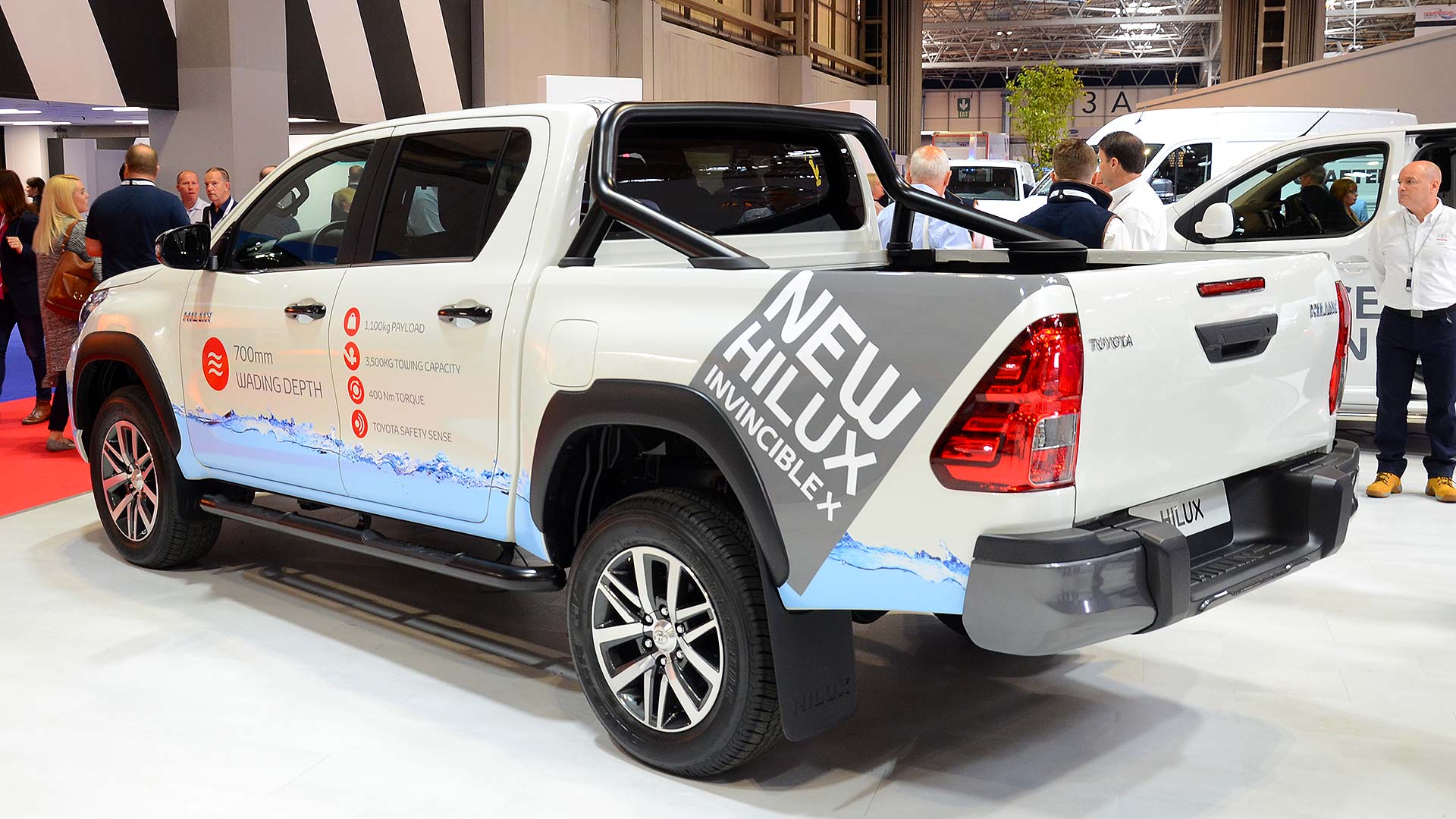 The updated Toyota Hilux Invincible X isn’t as aggressive as the hot Ranger Raptor, but it’s still more standout than regular Hilux. 18-inch wheels have a two-tone machined finish, there’s liberal use of smoked grey chrome, and the interior boasts an all-black colour scheme and piano black trim. A full suite of active safety kit is standard on 2019 models, too. 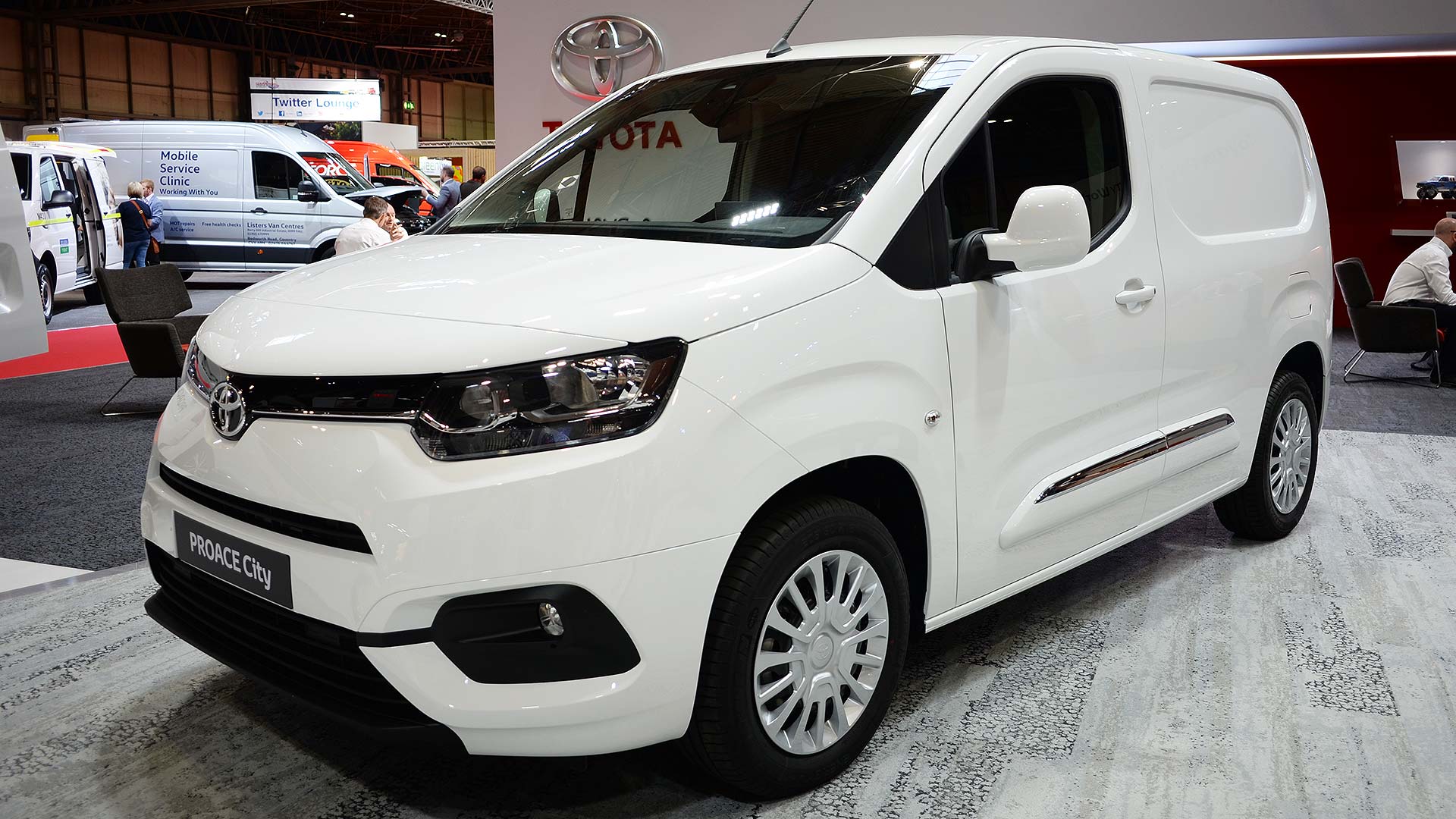 The long-running Toyota Proace van is being joined by a smaller sibling, the Proace City. The 2019 CV Show marked its global debut ahead of taking on Europe’s small van sector, which accounts for 1 in 3 CV sales. If the looks are familiar, that’s because it’s been developed with PSA, so is also sold as the Citroen Berlingo, Peugeot Partner and Vauxhall Combo. 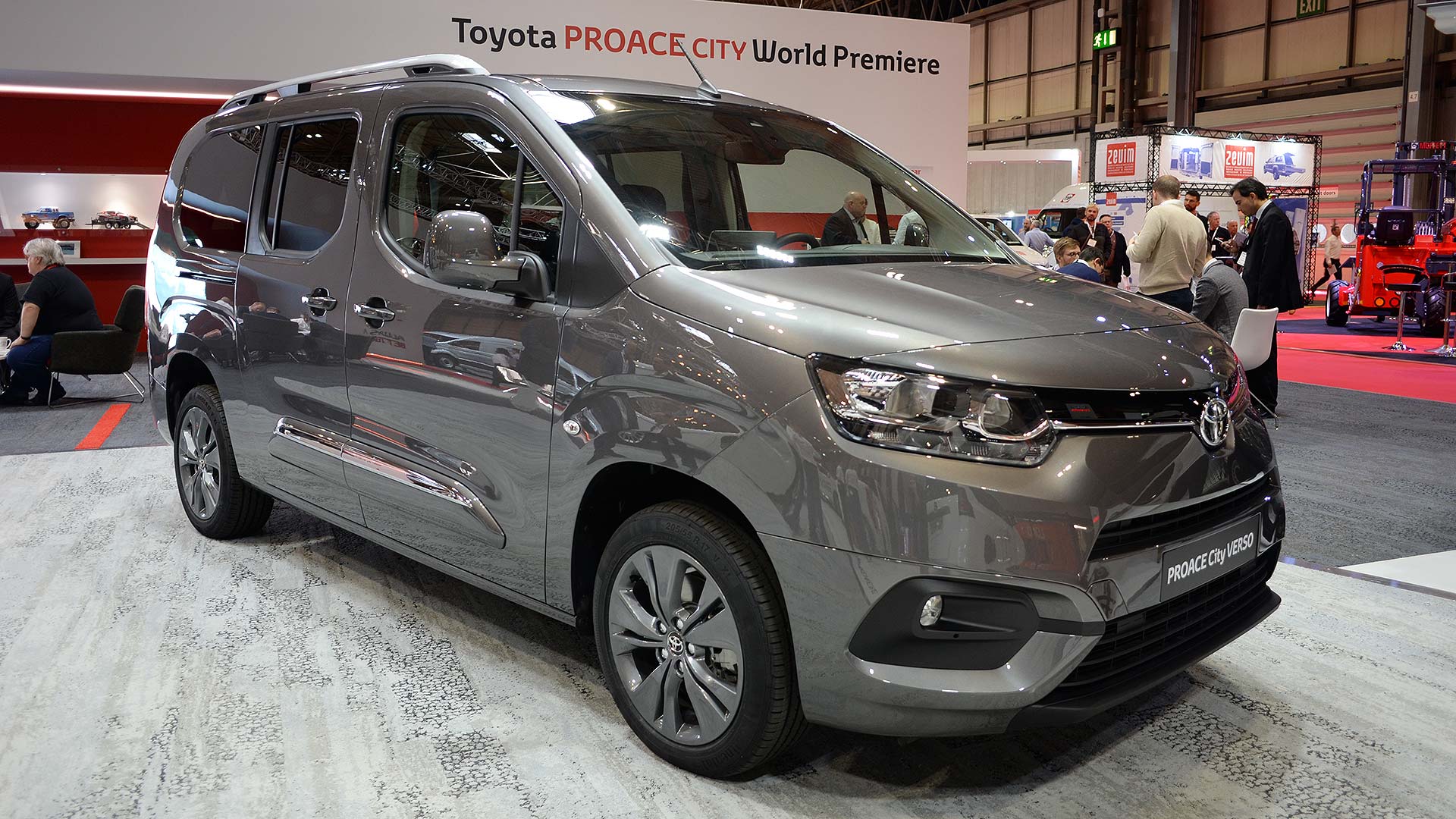 There’s a passenger version of Toyota’s new small van too, called the Proace City Verso. This is available with three rows of seats in both short-wheelbase and long-wheelbase guise. 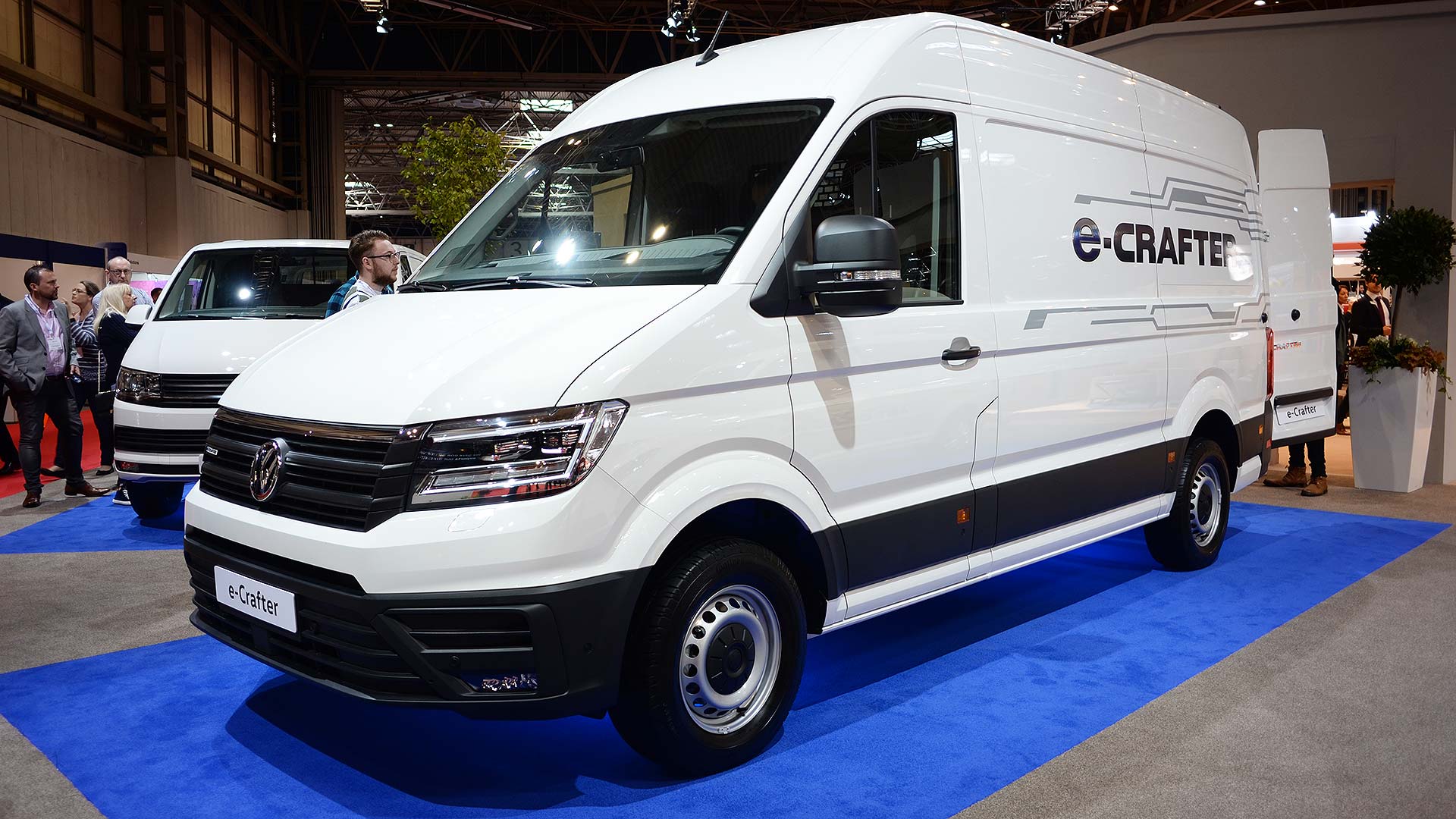 Volkswagen was showing off the e-Crafter large van, which is coming to the UK in right-hand drive in 2021. This one has a 136 horsepower power output and a 35 kWh lithium ion battery, good for a range of 107 miles. Importantly, load space is unaffected by the batteries, so it can carry 10.7 square metres of load – and the total payload is up to 1.75 tonnes. 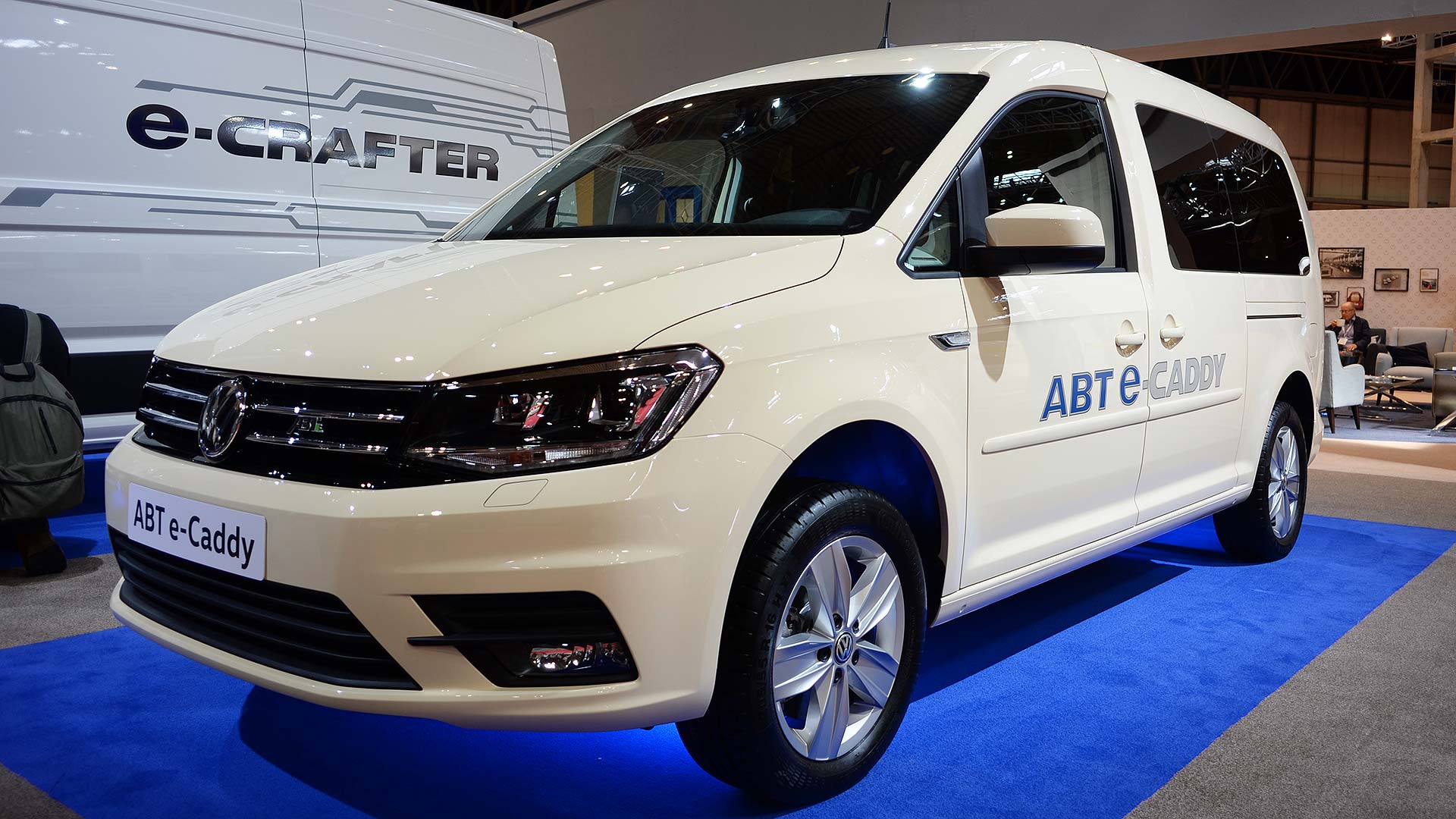 Volkswagen is planning to base its electric vans on its upcoming ‘MEB’ electric architecture. This isn’t ready yet – but it has a solution. Long-time VW tuning company Abt is, with official approval, converting current-generation vans to run on electric. The first to arrive is the Abt e-Caddy, which comes later in 2019. A range of around 140 miles sounds pretty good to us – and the conversion barely affects load capacity either. 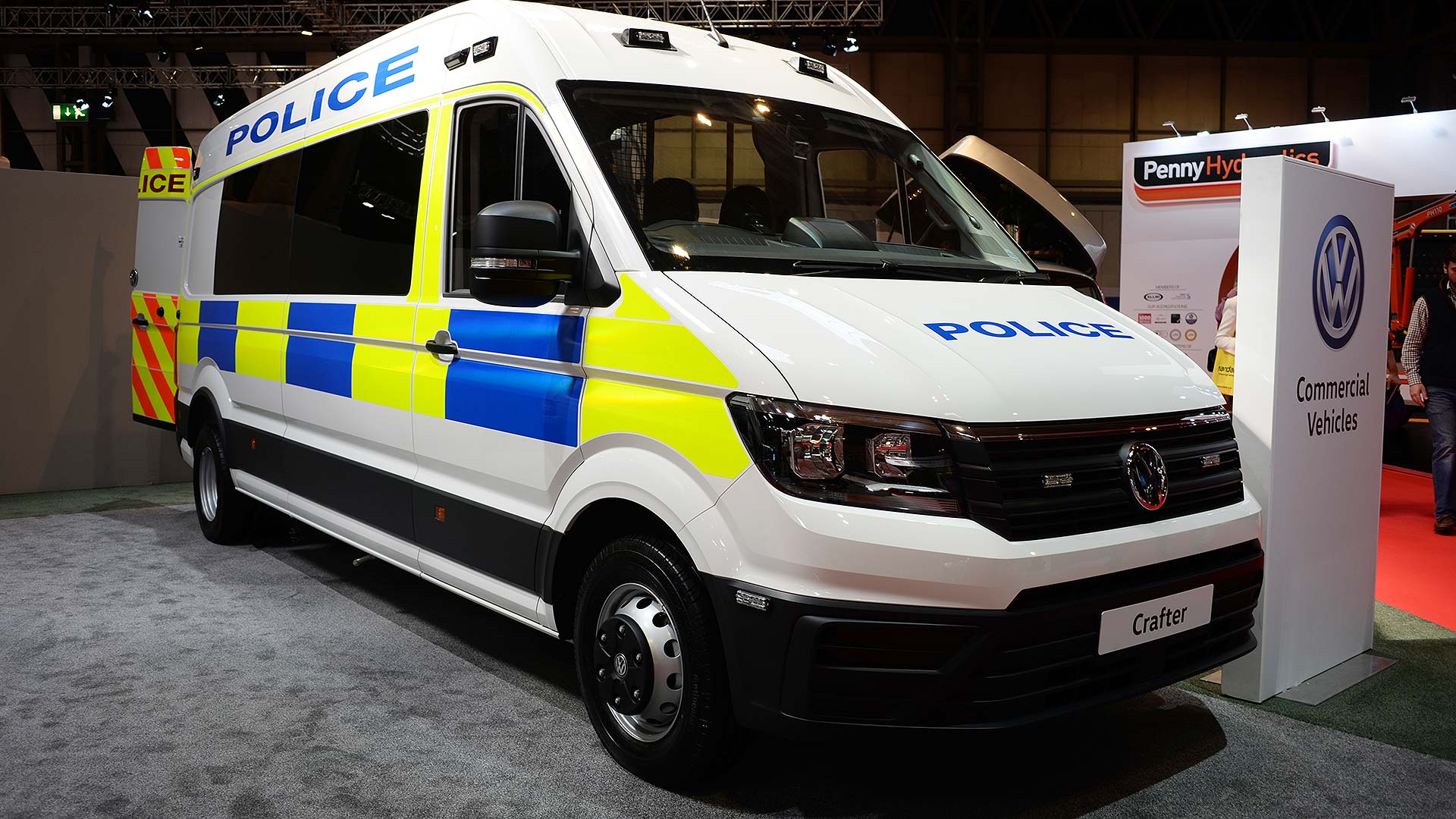 The Volkswagen ‘Engineered to Go’ customisation service is gathering pace in the UK. It relaunched earlier this year to offer high-quality, officially-approved conversions through Volkswagen UK van centres. This Police cell van apparently has toughened glass: one visitor asked if they could throw a brick at the windscreen to try it out. Presumably into the back of the van they went… 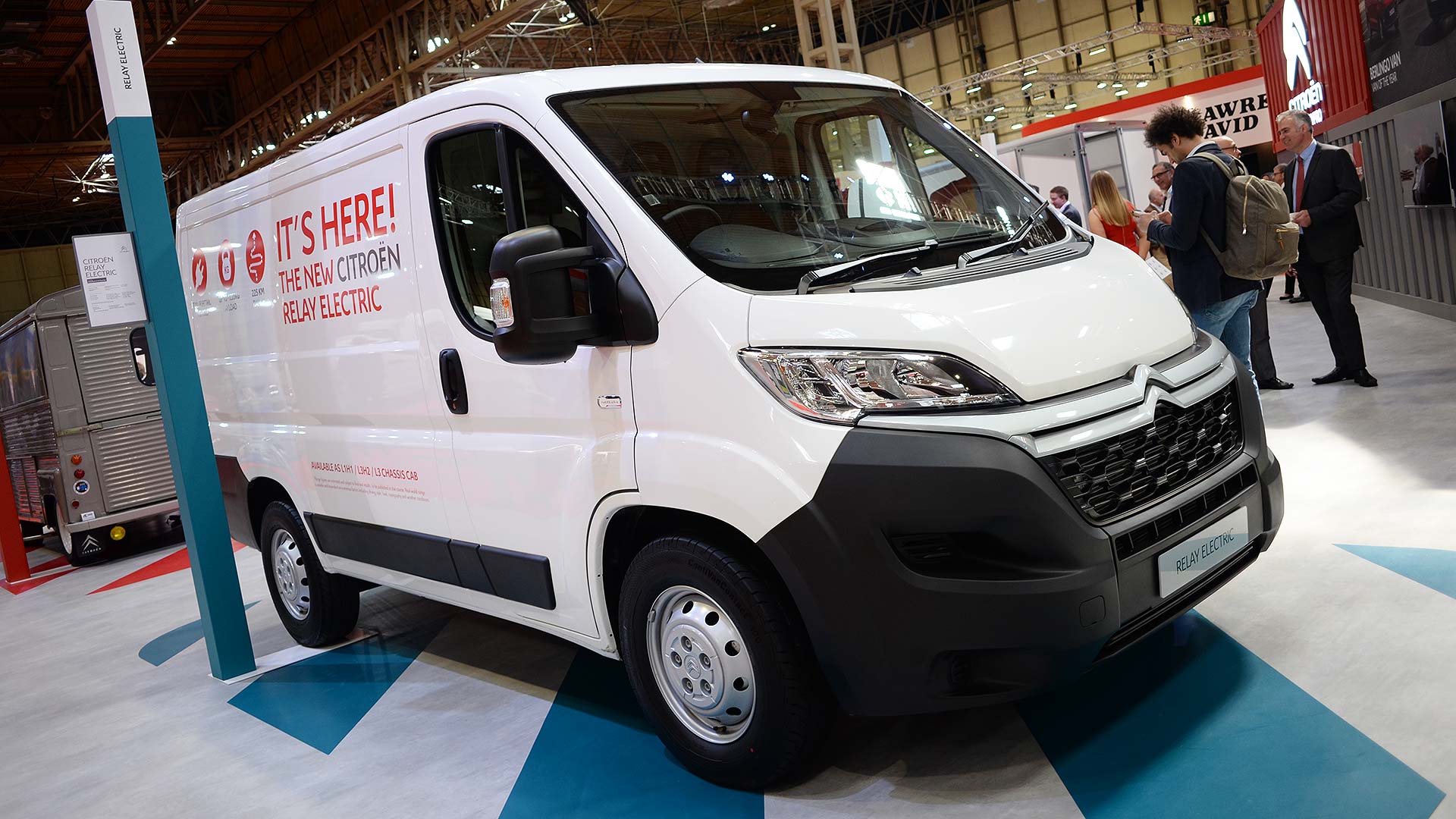 PSA, parent company of Peugeot and Citroen, is another brand committed to electrifying its van range. At the 2019 CV Show, it previewed electric versions of both the Citroen Relay… 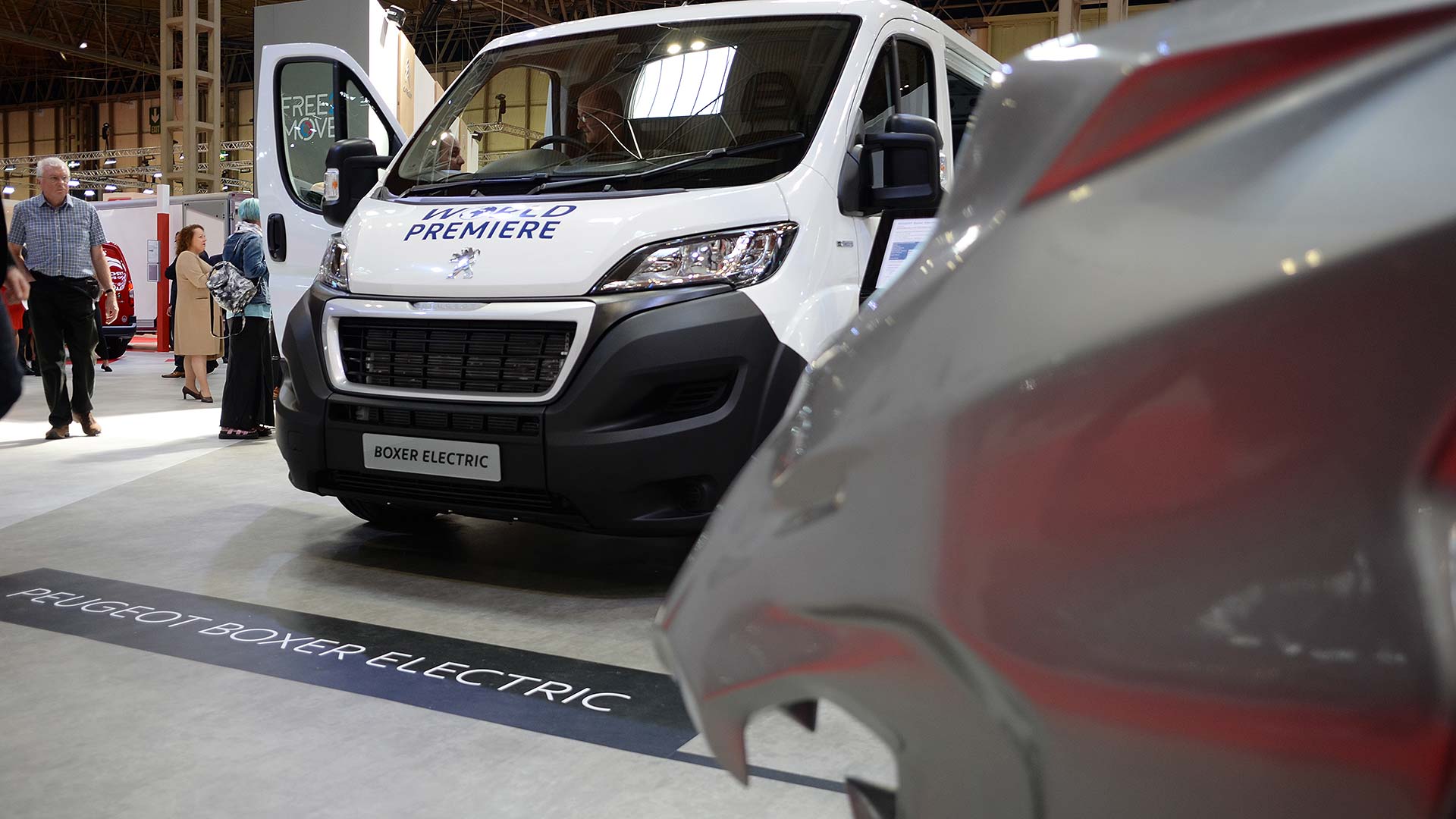 … And the Peugeot Boxer. Standard length models will have a range of 141 miles, and longer versions will run for 169 miles between charges. 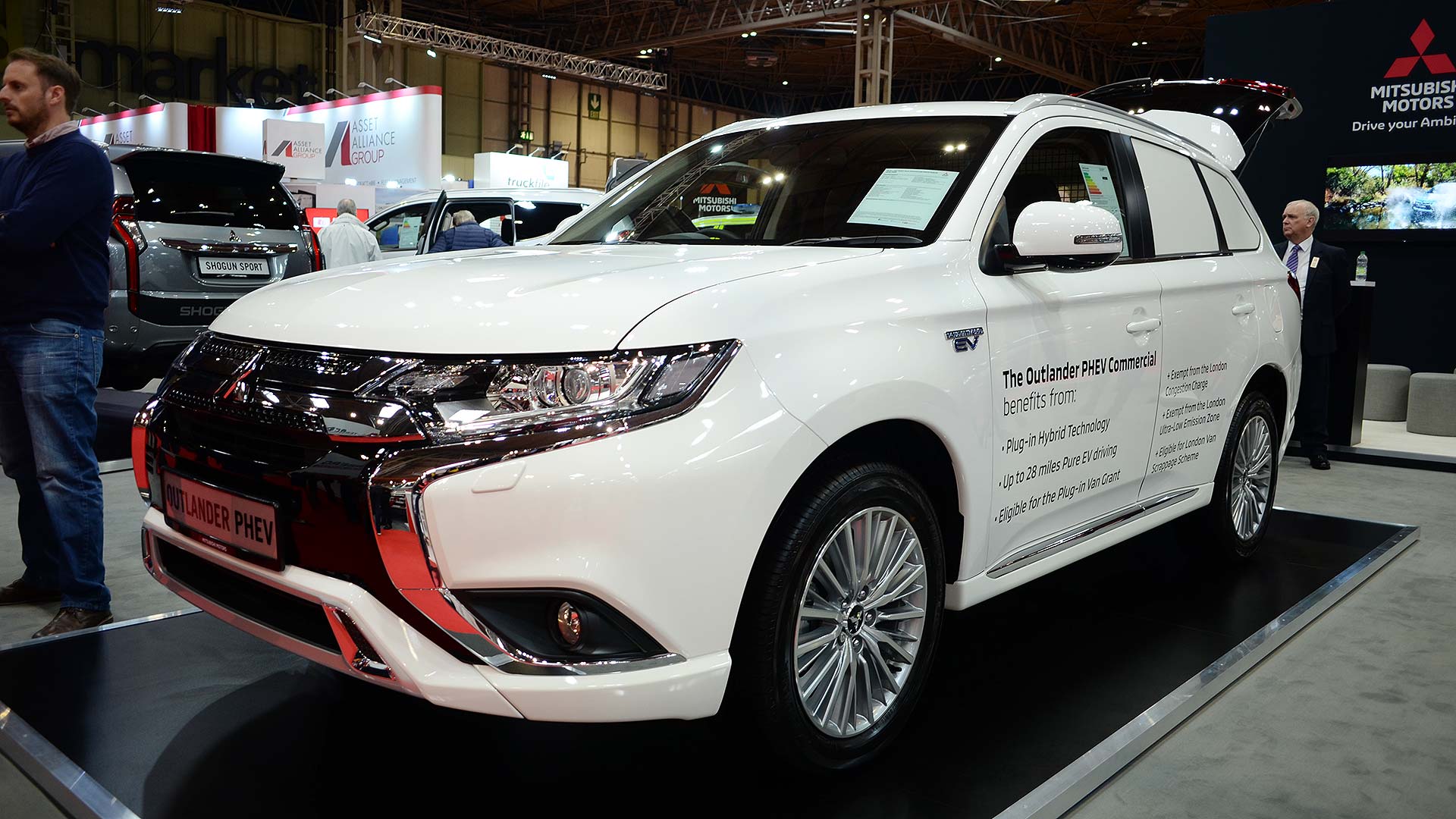 The London ULEZ has focused business attention on cleaning up their van range. For those who want to eschew diesel entirely, but aren’t yet ready to go fully-electric, Mitsubishi has the Outlander PHEV Commercial, a van version of Britain’s most popular plug-in electric car. 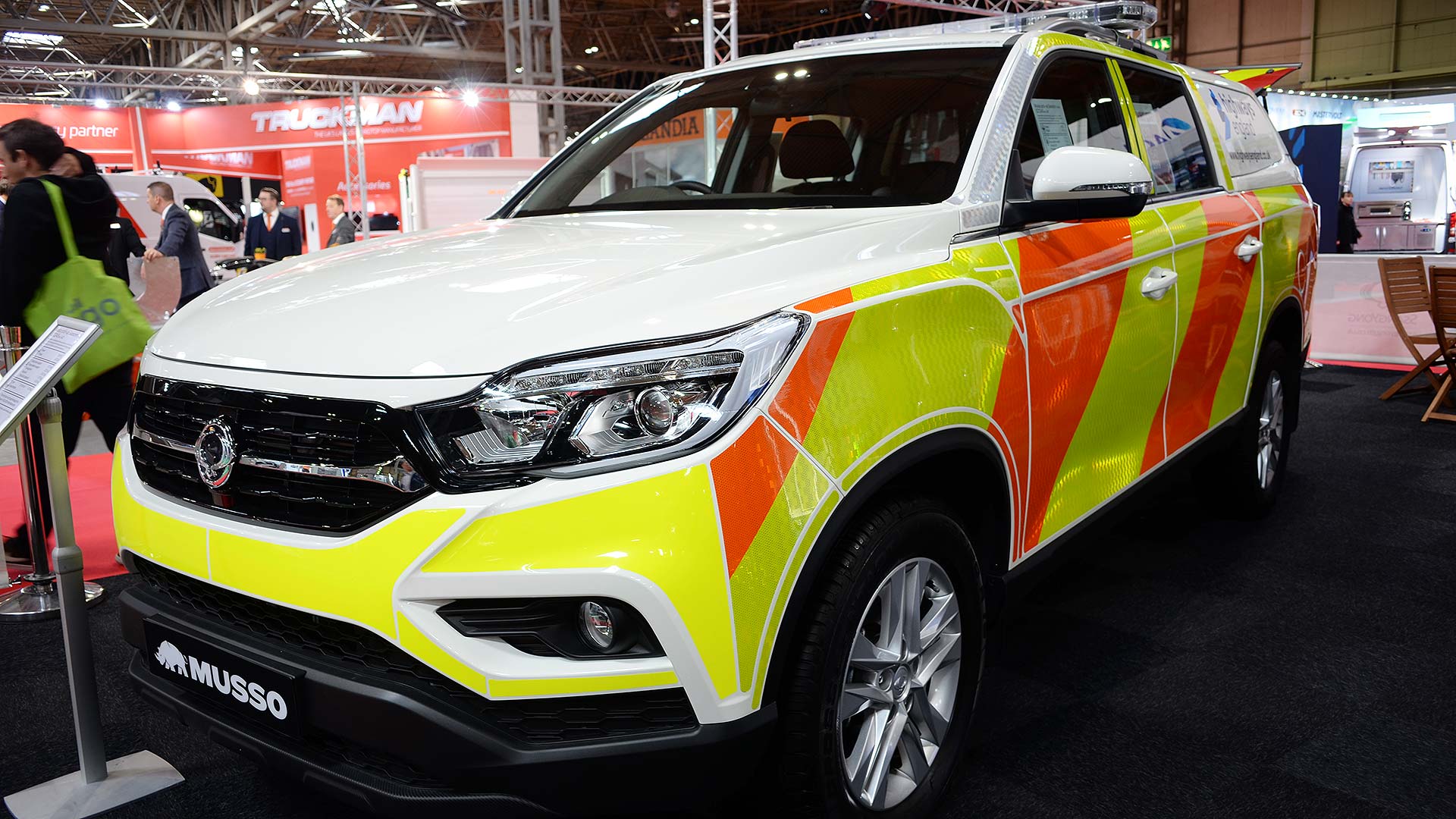 SsangYong is now an official supplier to England’s ‘blue and orange light’ services. On display at the show was an early look at a collaboration it will soon announce with Highways England. 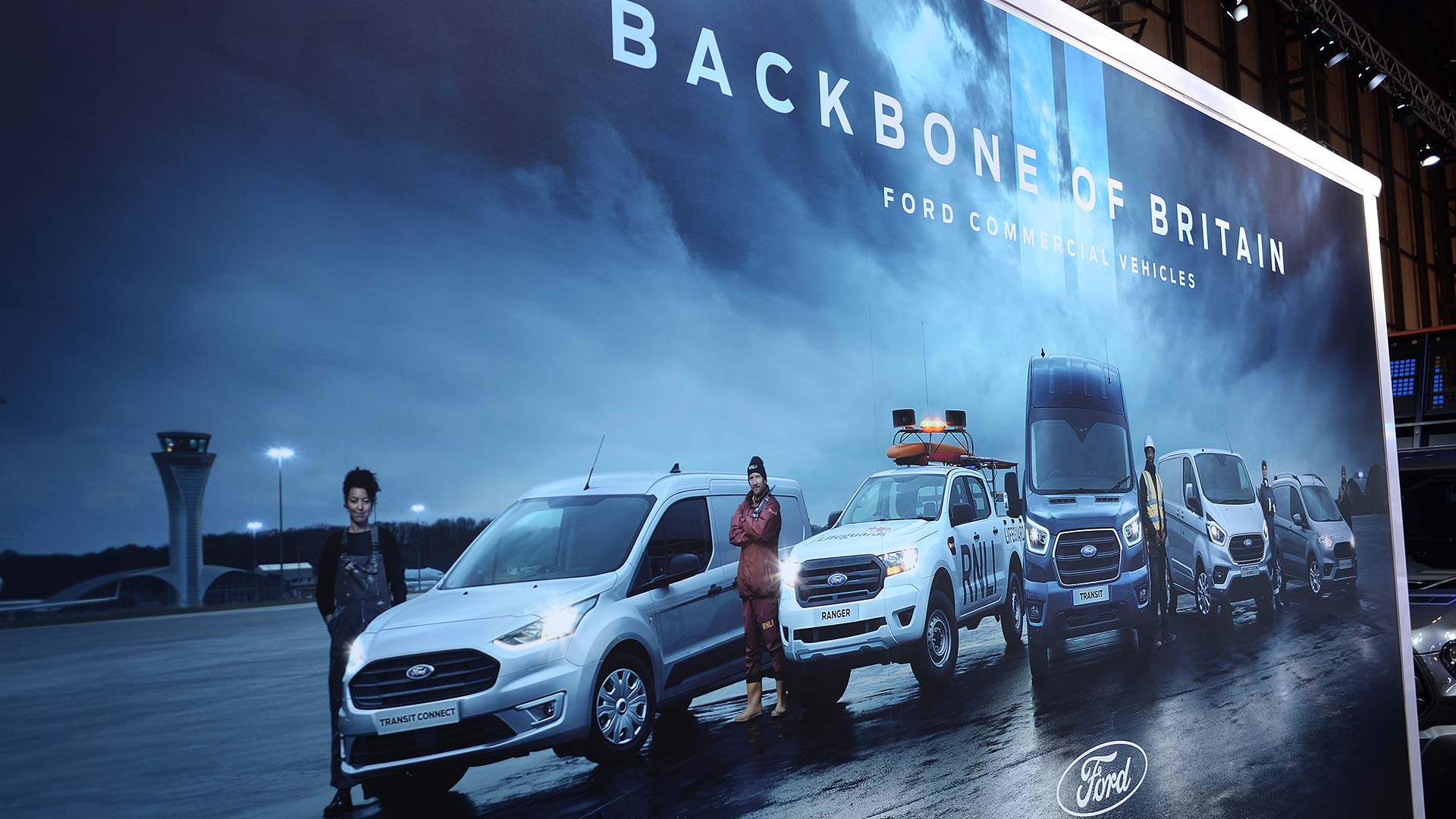 Ford was showing off its latest big-budget advertising campaign for its commercial vehicle range. As the UK’s CV market leader for 54 years, it has plenty to shout about, and the billboards were evident throughout the NEC… 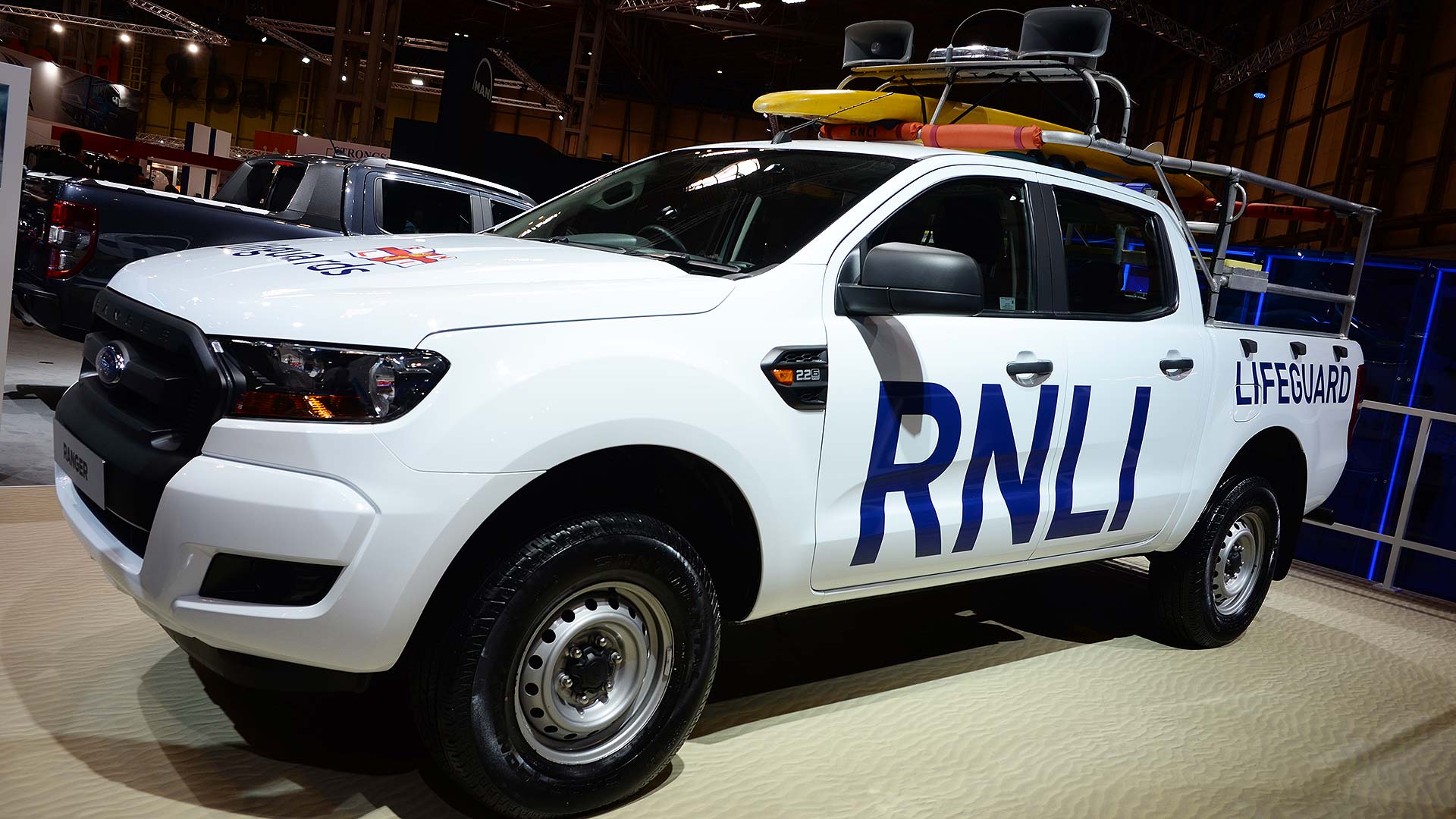 … And it even had a few star cars from the TV ad on its stand as well! Members of the RNLI used their presence to raise vital funds from well-wishing show-goers. 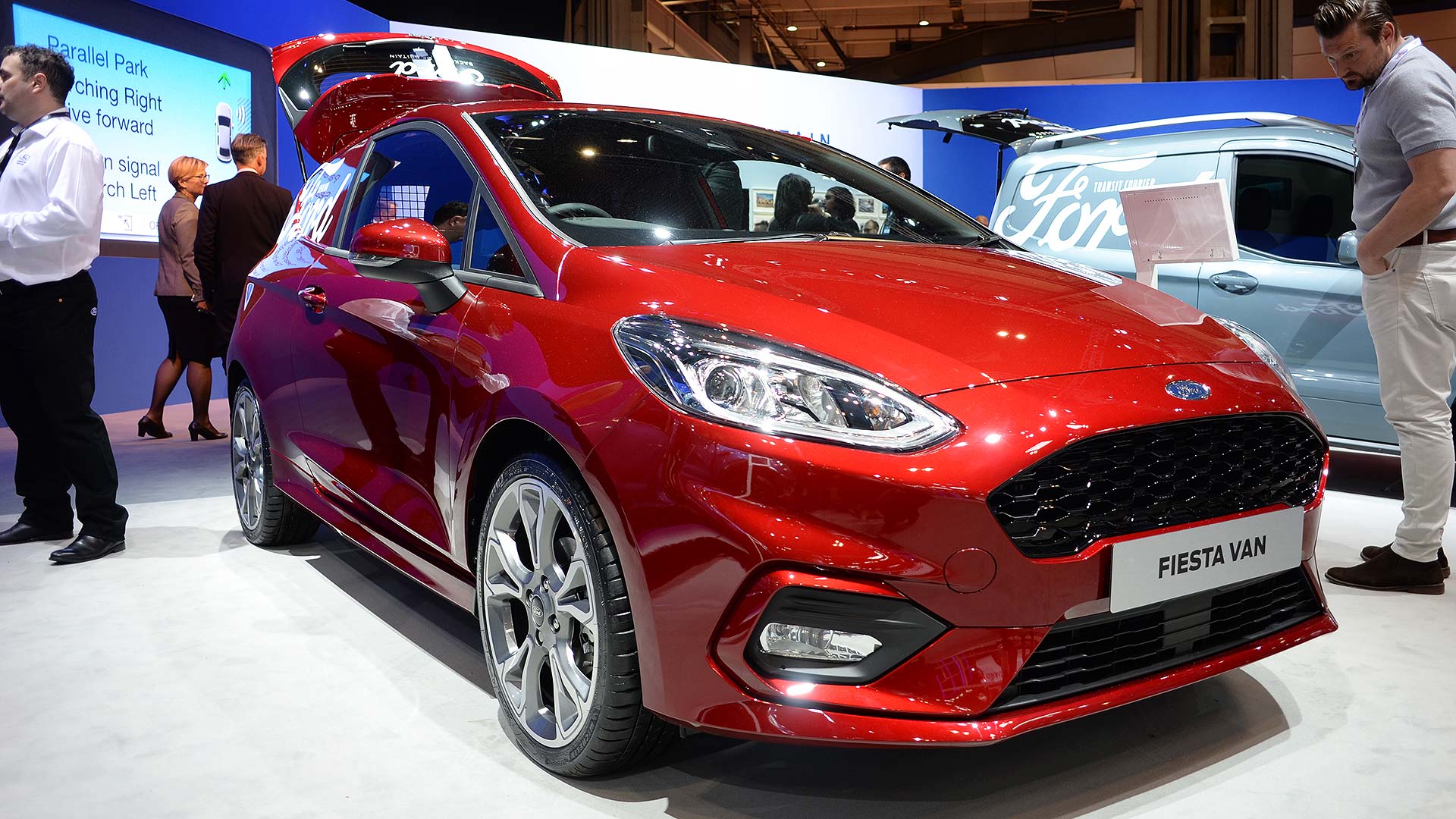 A year on from launch, the Fiesta SportVan still cuts a dash. It’s probably the most enjoyable small van driving enthusiast can buy – a genuine ‘hot hatch’ van. 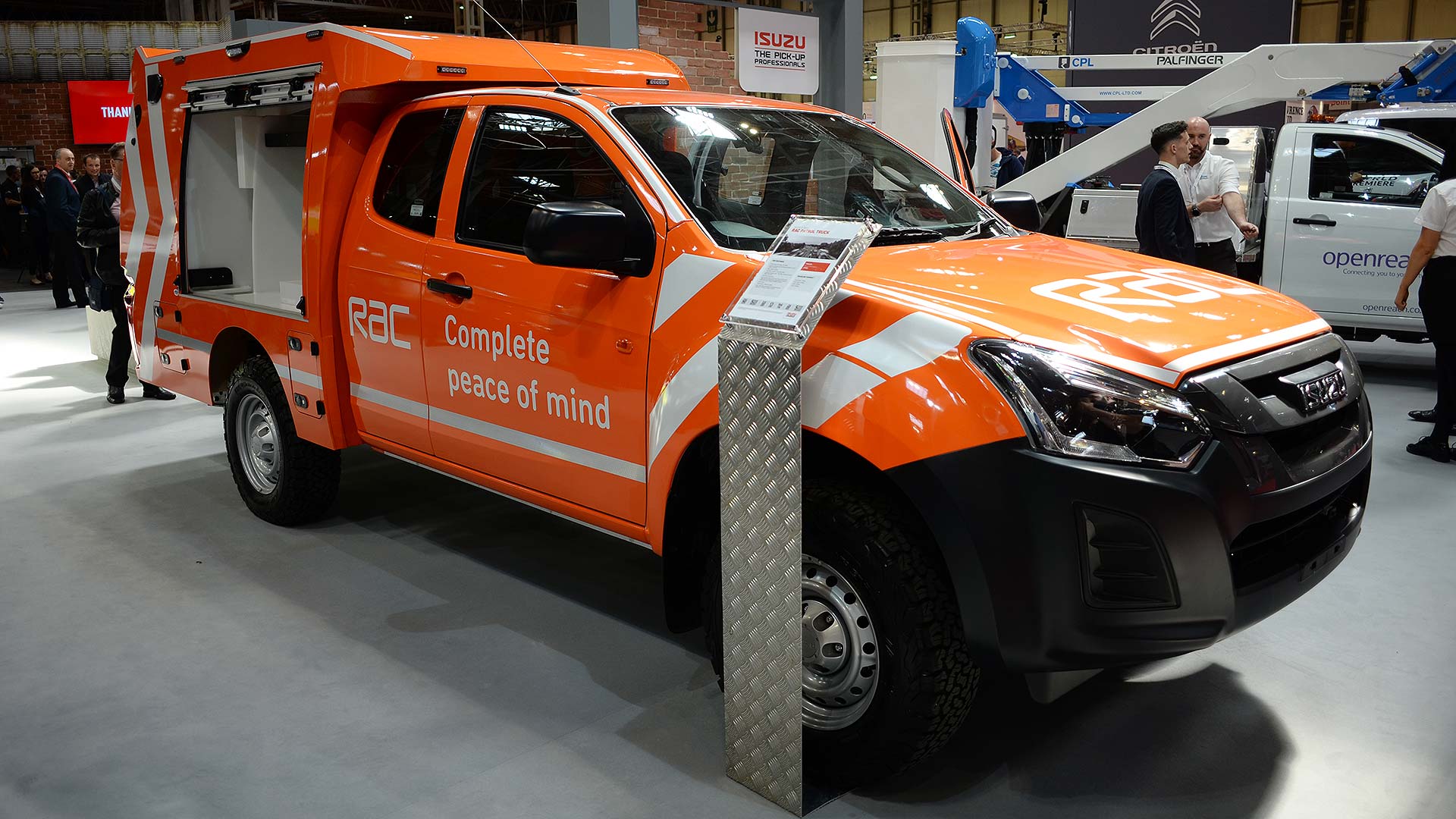 The innovations team at the RAC has worked with Isuzu and a specialist bodybuilder to create this clever new Heavy Duty Patrol Van. Based on a D-Max supercab, it can tow up to 2.8 tonnes – good for 90 percent of cars and vans on UK roads – but is much more manoeuvrable than big flat-bed trucks. It’s perfect for use in busy cities, particularly as it’s equipped with the RAC’s equally clever ‘All-Wheels Up’ towing kit that can recover stranded 4x4s and electric vehicles. 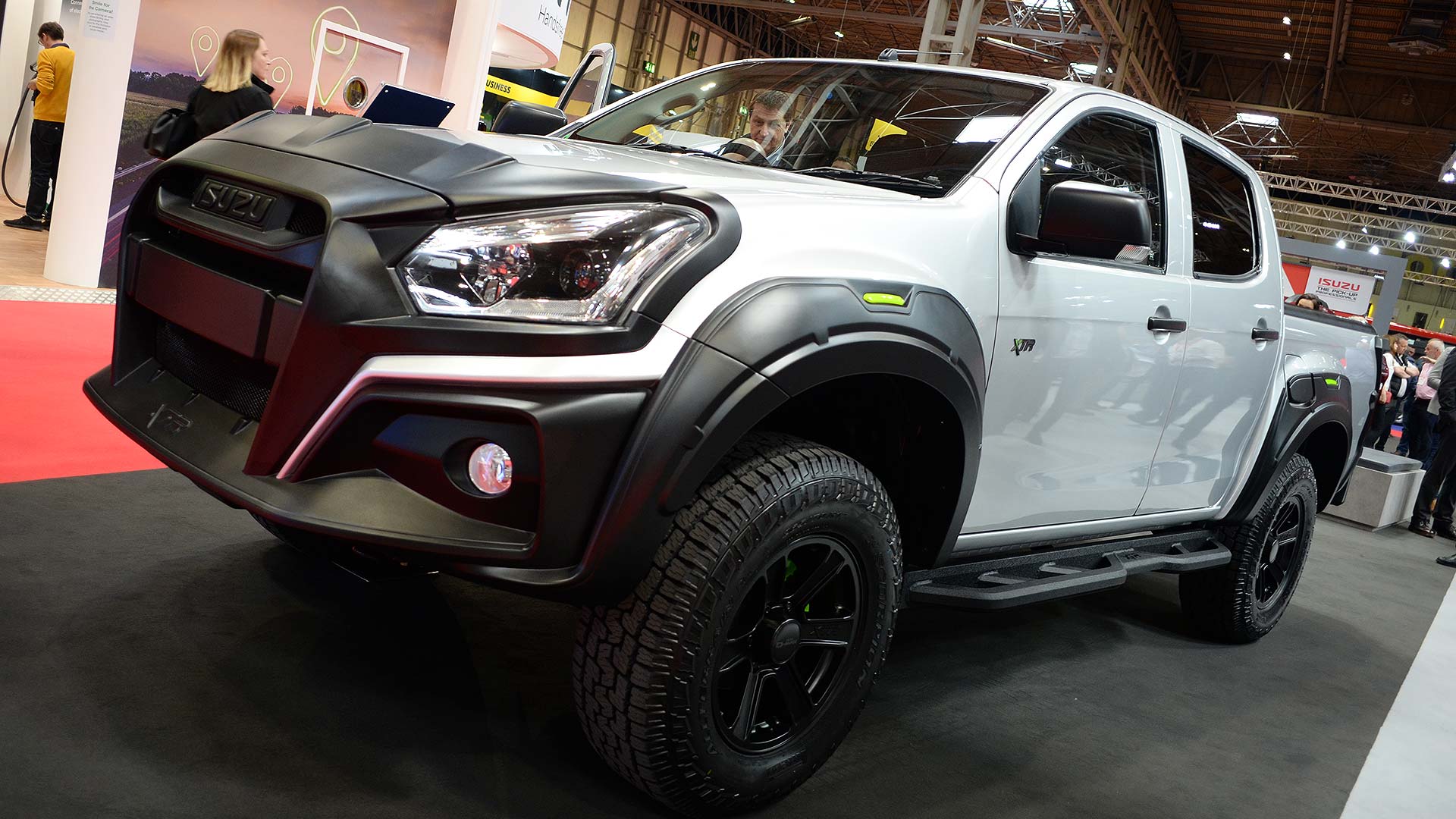 The D-Max XTR is another appealing special from Isuzu. It has uprated suspension (including components to increase wheel articulation), 17-inch wheels and 32-inch tyres, adding an extra 250 mm of ground clearance. High-end Kevlar ceramic brake pads are fitted, and it’s equipped with all-new Pirelli Scorpion All-Terrain tyres. The tough bodykit is distinctive, and we love how the green detailing extends to vivid green-painted suspension and brake components beneath… 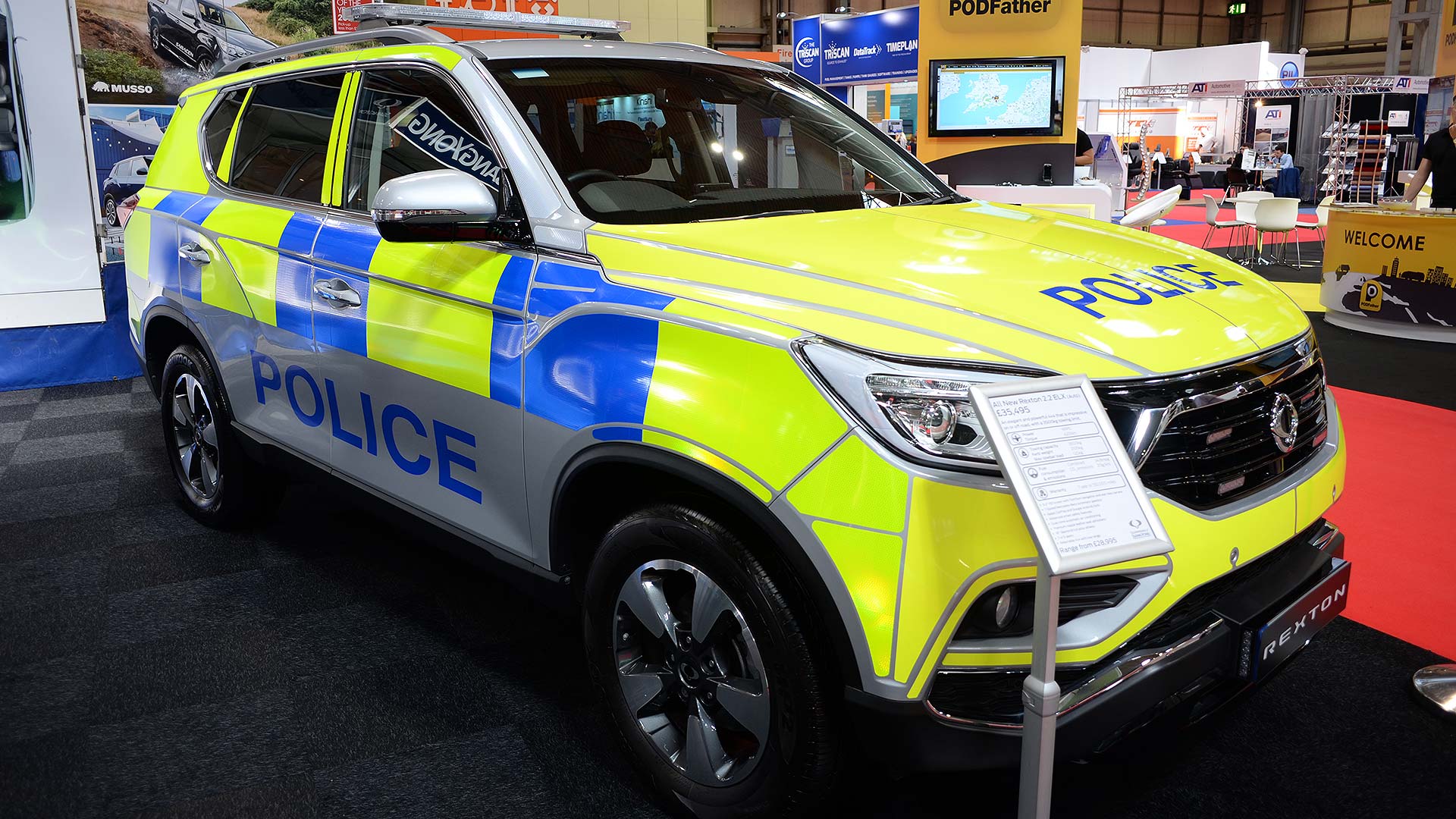 Another example of SsangYong’s successful partnership with authorities is this Police-liveried Rexton. The company hopes many more like this will be delivered in coming years. 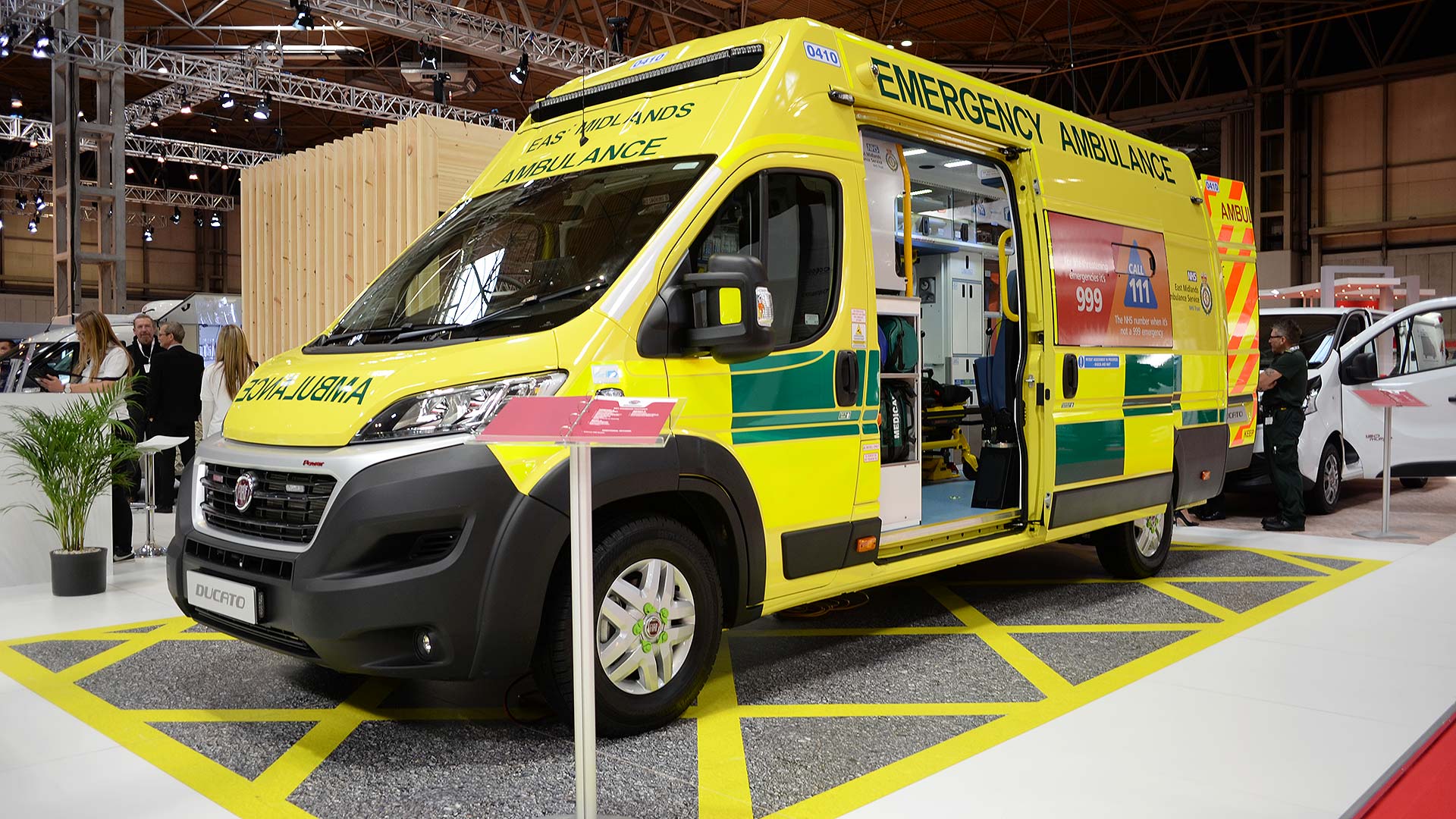 A government report has recommended old-fashioned ‘box-style’ ambulances to be replaced by new, modular designs based on panel vans. Such as the popular Fiat Ducato conversion that’s already created hundreds of new British ambulances. If all ambulances switched to this design. The NHS could save more than £11 million each year: that’s why this exhibit was gaining a lot of attention from CV show-goers. 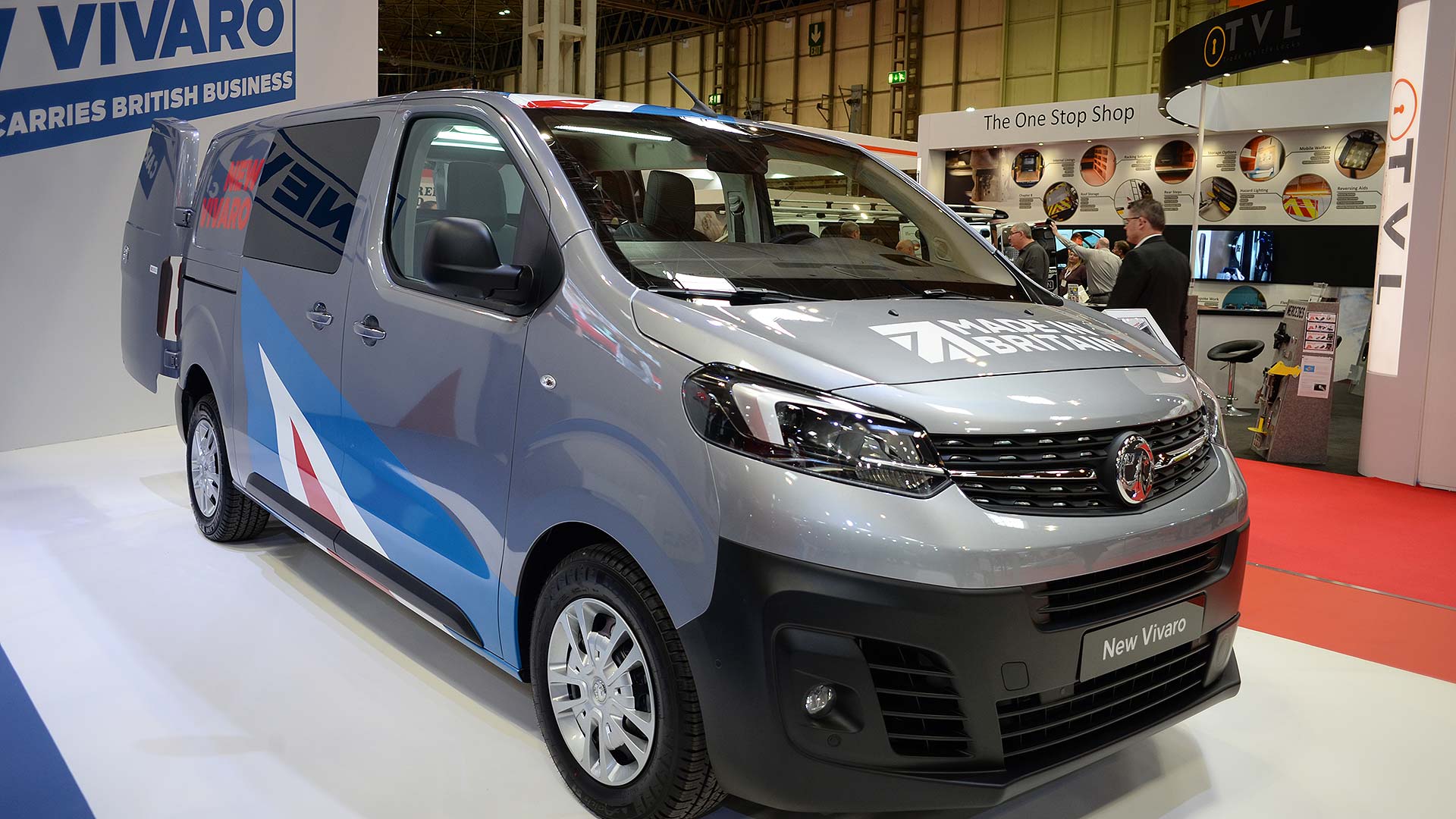 The passenger version of the new Vauxhall Vivaro is called the Vivaro Life. It can seat up to nine passengers, and it too will be offered as a fully-electric model from early 2021. It’s the perfect people carrier for those who want to treat passengers well – but, as it will also carry 3,397 litres of load with all seats removed, it remains a practical van at heart too. 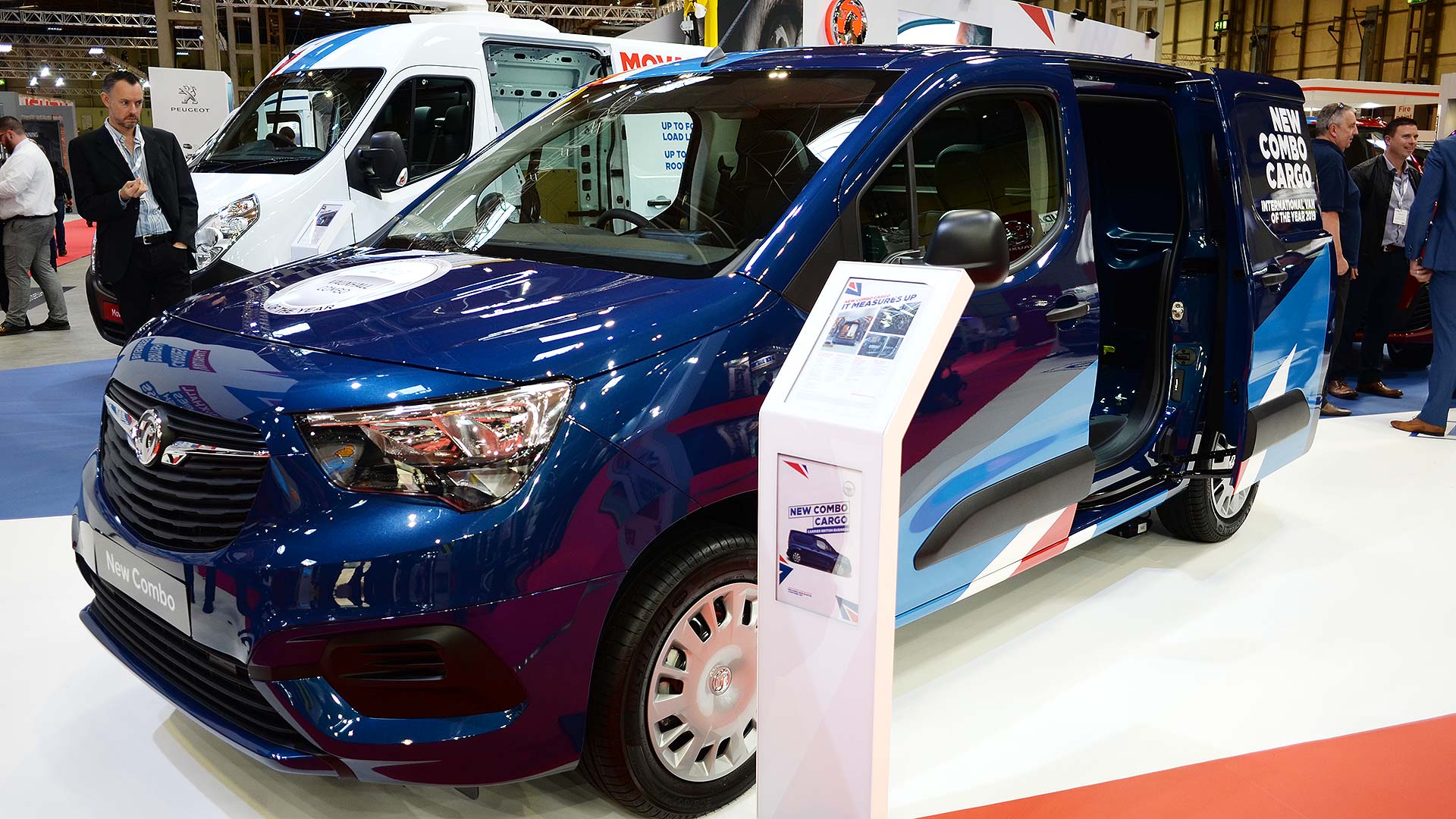 The Vauxhall Combo Cargo is the firm’s fresh new arrival in the small van sector, and it’s already winning fans. Over 5,000 have already been sold in the UK, making it one of the best-selling models in its sector. No wonder Vauxhall is so bullish about its chances in the British van market right now. 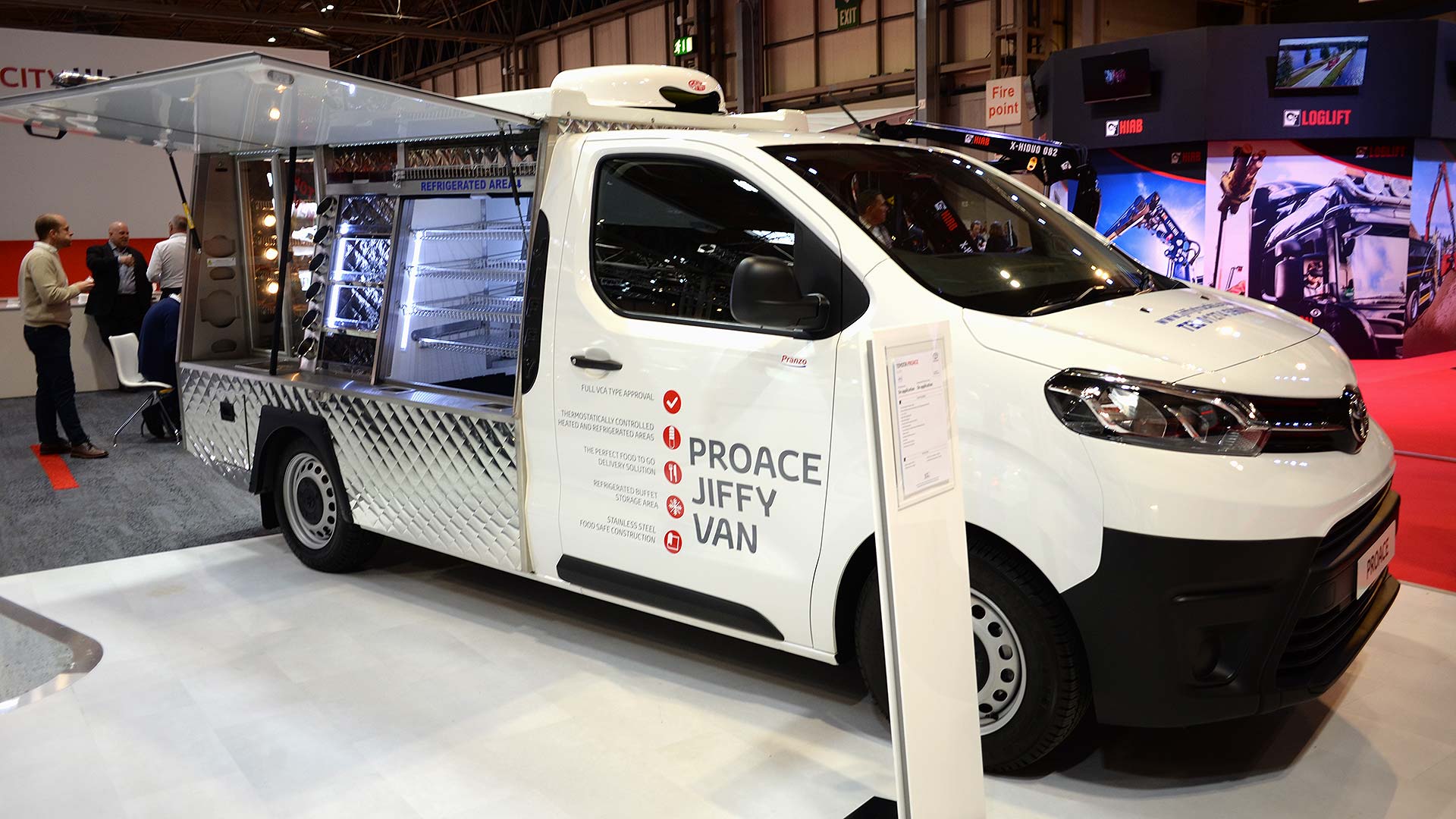 Finally, we simply had to check this out: Toyota’s Proace Jiffy conversion. It’s a mobile food wagon, including a hot food display cabinet and space for a restaurant-spec coffee machine. Sadly, it hadn’t been kitted up, so we had to spend money at the NEC’s overpriced shops instead. How about decking it out for next year’s show, Toyota?