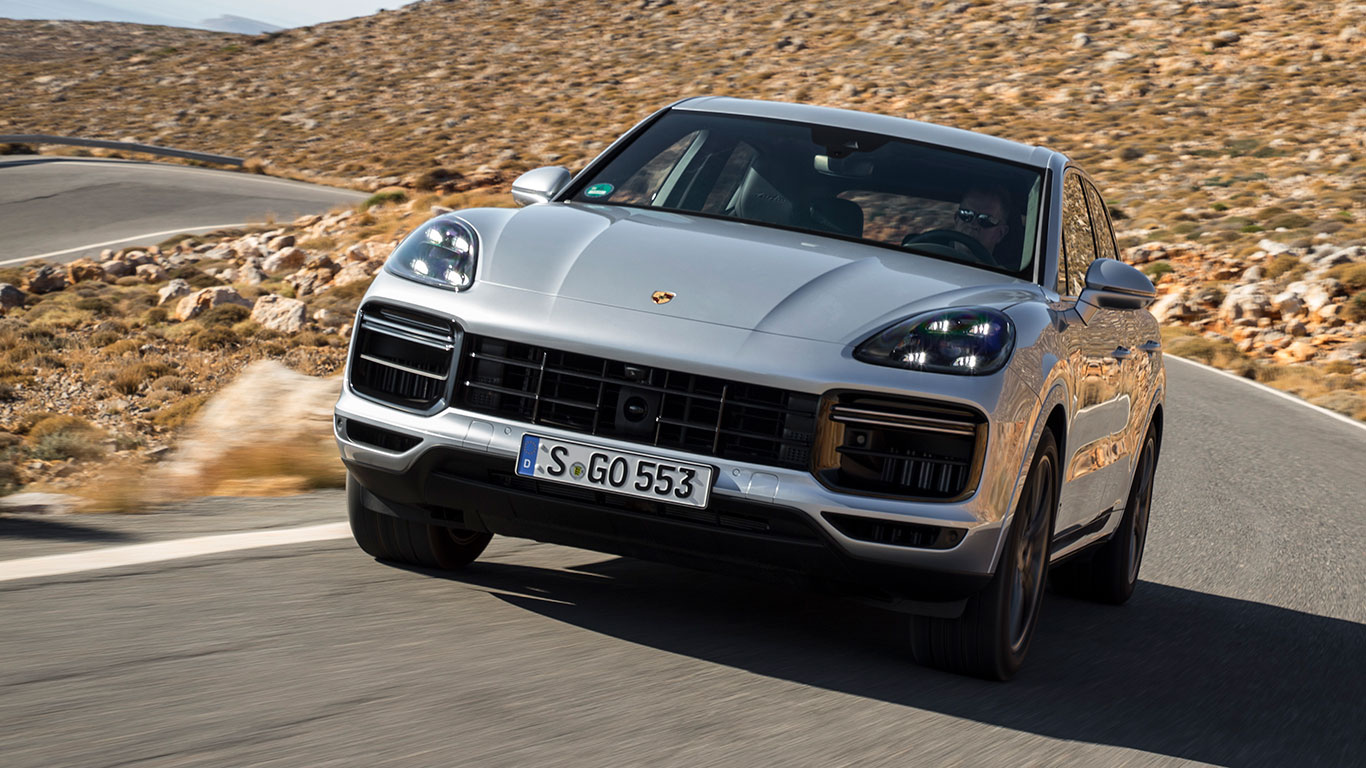 Porsche has been selling SUVs for 15 years, and the Range Rover-rivalling Cayenne is now a firm fixture in the Stuttgart manufacturer’s line-up – selling 770,000 units worldwide. The more recent Macan SUV now outsells the 911 roughly three to one.

Revealed at this year’s Frankfurt Motor Show, the third-generation Cayenne shares a shortened version of the VW Group’s MLB platform, which underpins the latest Audi Q7 and Bentley Bentayga. 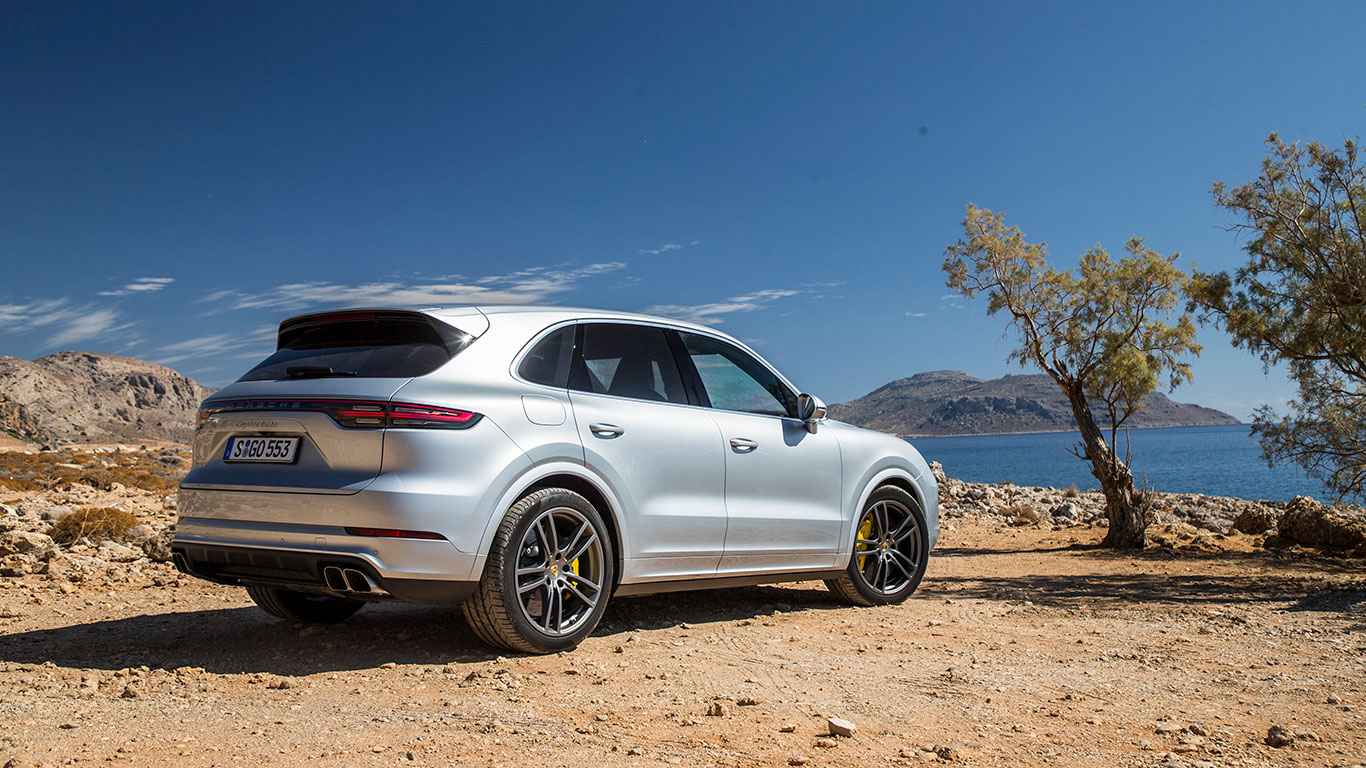 While the latest Cayenne is all-new, you may struggle to spot the differences at first glance. It’s marginally longer than its predecessor, and slightly lower, but you’d be hard pushed to tell the difference without parking them side by side.

It’s unmistakably a Porsche, though. The head and tail lights could have been lifted straight from the Panamera, while the chunky grille and bonnet scream “get out of my way”.

The Porsche Cayenne has never been a looker and while, in our eyes, it’s still not attractive, it’s certainly not as offensive as it once was. And it certainly turns heads, which you might see as a positive if you’re looking to spend up to £100,000 on a Porsche SUV. During our two-day drive on the Greek island of Crete, it attracted beeps, waves and thumbs-up everywhere it went. And not just because of our driving. Will it get the same reaction in the UK? We’ll get back to you on that.

There’s no shortage of clever features we can tell you about the new Cayenne. New surface-coated brakes, standard on the Turbo, use discs coated in tungsten-carbide to bring the hefty Cayenne to a stop in a shorter distance. They also last longer and produce less brake dust. The Turbo even comes with a clever adaptive spoiler that operates in five different positions: including as an airbrake during heavy decceleration. 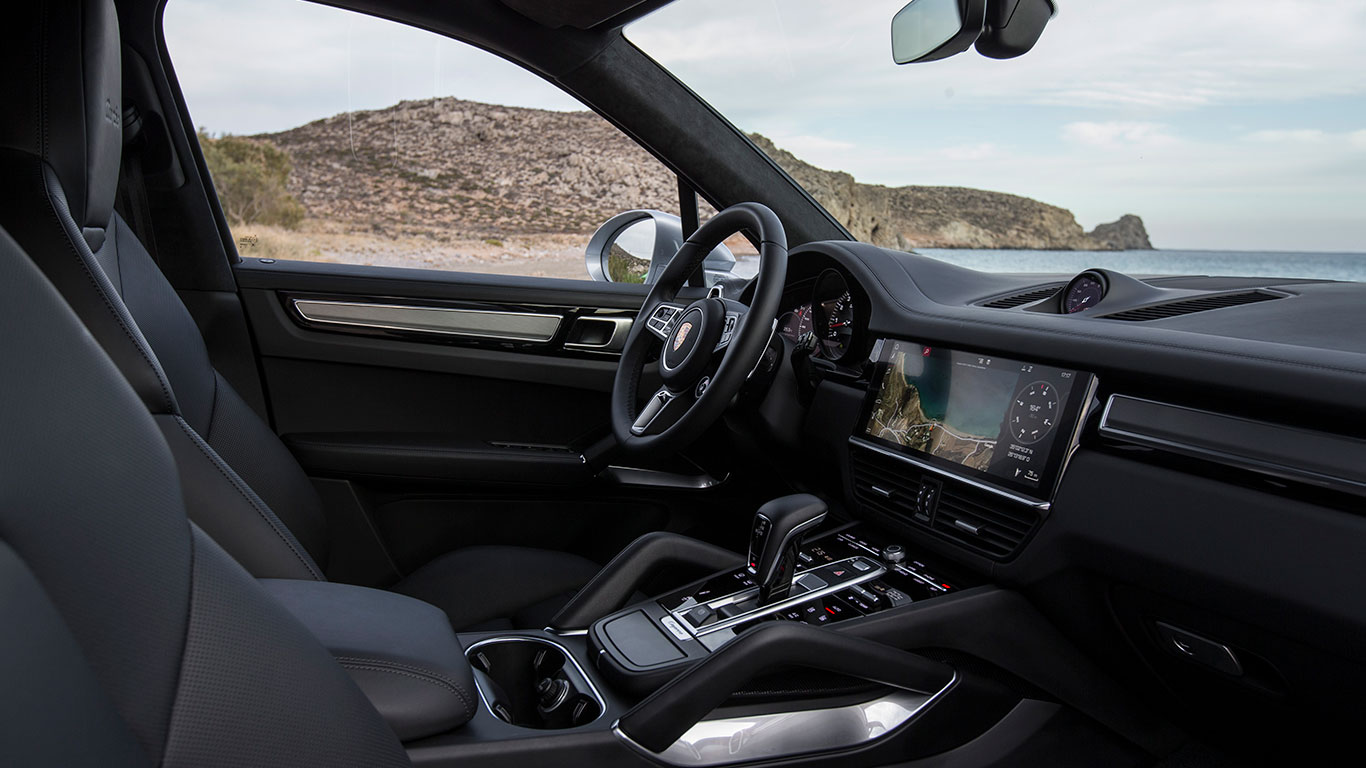 Apart from the extra room and elevated seating position, you could almost be sitting in the latest Porsche Panamera when you get in the Cayenne. And, as the Panamera has one of best interiors of any car on sale, that certainly isn’t a criticism.

Even the most basic Cayenne feels thoroughly upmarket. Most of the buttons that cluttered up the central console of its predecessor have been replaced by a huge 12.3-inch HD display. The few buttons that are left are hidden behind a classy black panel, providing haptic feedback similar to an iPhone when you use them. Even the air vent controls feel well made.

There’s plenty of storage space, too – the door bins will accommodate a 1.5-litre bottle, while a generous glove compartment will hold all the paraphernalia that goes with family life. Kids in the back won’t complain about the space on offer, either, while a generous amount of adjustment in the rear seats means everyone will be able to get comfortable. Yes, this is a Porsche you can buy with a guilt-free conscience if you’re a parent.

We like the optional panoramic sunroof, which is situated further forward than before, with a front section that operates as a normal tilt/slide roof. It does a commendable job of brightening up the cabin – not that it’s particularly dismal to begin with. 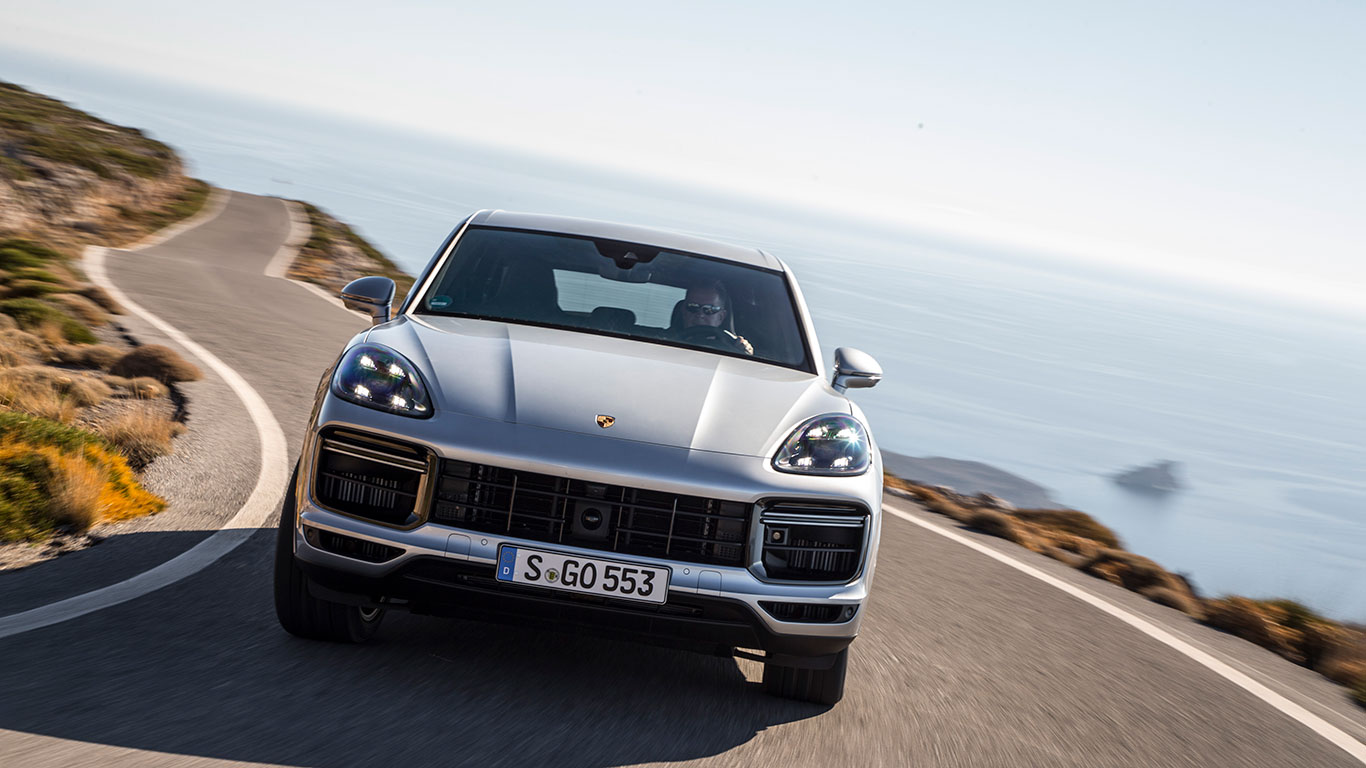 Even the entry-level (if you can describe a £56,000 Porsche as ‘entry-level’) Cayenne is excellent to drive. Not only does the turbocharged V6 sound the part, it’ll also hit 62mph in 6.2 seconds. But that’s only telling half the story. When Porsche brought along the Macan, it described its small SUV as the ‘sports car of its segment’, and it’s now mimicking that catchphrase with the Cayenne. Marketing talk aside, it’s spot on. Porsche has some of the best engineers in the business and if anyone can make a big SUV handle like a sports car, the guys in Stuttgart can.

It’s incredibly agile, almost feeling like the smaller Macan on the tight and twisty Crete roads of our test. With the optional rear axle steering, the axles steer in opposing directions at speeds of up to 50mph. This reduces its turning circle around town, and makes it nimbler on the twistiest roads. Above this speed, the axles steer in the same direction, making it feel much more stable at motorway speeds and when negotiating long, fast bends. You can feel the system working, although it’s a slightly bizarre sensation at first. You can find yourself misjudging the amount of steering lock needed to negotiate a bend.

Talking of which, we’d like a little more steering feel. It’s turning into a cliche now. With very few exceptions, all modern cars with electric power steering have light, uncommunicative steering and, even in weightier Sport mode, even Porsche hasn’t managed to make the Cayenne’s wheel as communicative as we’d like.

Moving up the range, the Cayenne S shaves a second off the 0-62mph time, and the Turbo a further second. The Cayenne S really is the sweet spot in the range: it’s faster than 99 percent of buyers could possibly want, sounds fantastic and doesn’t have a hulking V8 over the front wheels.

The Turbo is incredibly fast, for sure, and is the one to go for if money’s no object and you want everyone to know that. But it’s not the purest car to drive here. Despite being 10kg lighter than its predecessor, you can feel the extra 155kg over the S: it’s not as agile as the lesser models. The sound isn’t all that, either, and it lacks a little flair that you’d rightly expect if you spent nearly £100,000 on the top-spec Cayenne. 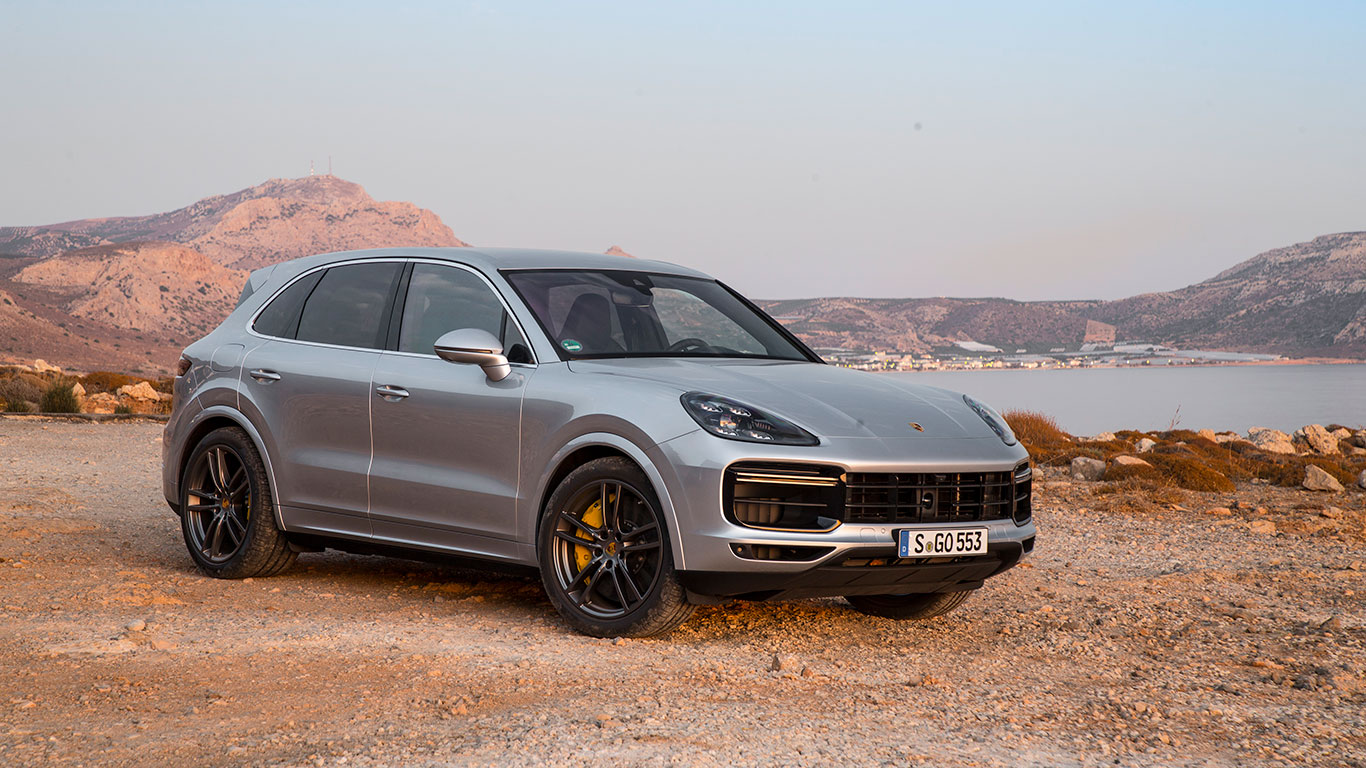 We don’t want to end on a negative, though. The Cayenne may share a platform with the Audi Q7 and Bentley Bentayga, but it trumps them both in most areas (despite being a chunk cheaper than the latter).

It’s immensely capable on twisty roads, and quick in a straight line. Unfortunately, the top-spec Turbo does lack a little bit of verve… it’s just not as loud and in-your-face as we expected, seemingly grown up compared to the outgoing model. Some people will appreciate that, though, and our money would go on the standard Cayenne or Cayenne S anyway.

The interior is perfectly judged for an upmarket SUV, while still being extremely practical (boot space is up 100 litres compared to its predecessor). Some of the technology sits on the fence between being groundbreaking and gimmicky, but it’s all brilliantly executed in a typically Porsche fashion.

Is it illegal to run out of fuel on a motorway?

While it's not an offence to run out of fuel on a motorway, you could be charged if the breakdown leads to a collision.
Read more