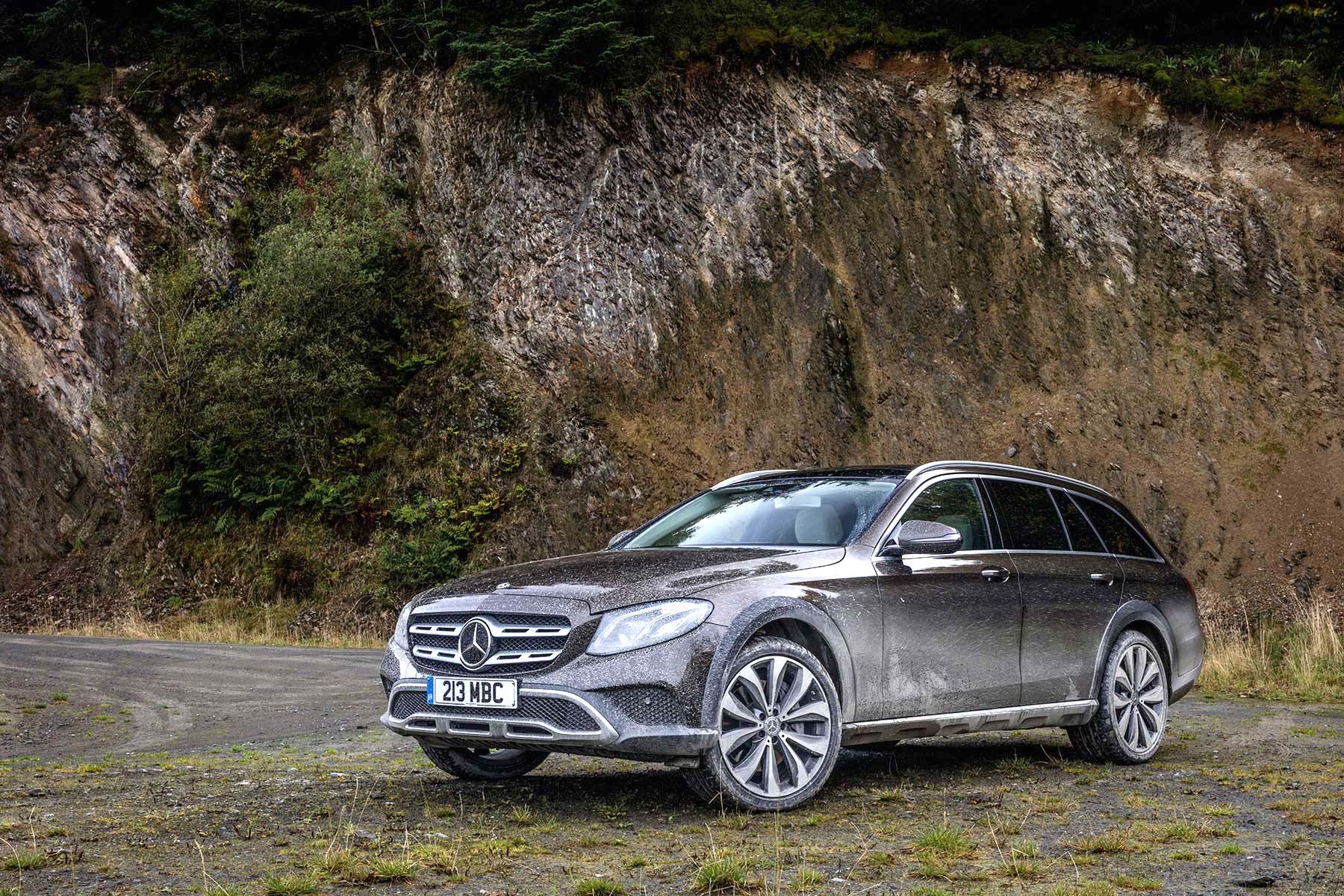 In a world where seemingly everyone wants an SUV, the idea of a high-riding estate car is certainly a niche one. But various versions of Audi Allroad and Volvo Cross Country models have proven that demand exists for an off-road alternative.

Despite a passion for covering every possible market segment, it has taken Mercedes-Benz until the fifth generation of the E-Class to launch an All-Terrain variant. With talk of ski lodges and a UK launch centred around the great outdoors, the target market for the E-Class All-Terrain is quite apparent.

If you happen to own a large country estate and enjoy pursuits such as horse riding and fishing, Mercedes wants this to be your top choice – should you be averse to SUV ownership.

The car’s niche appeal is acknowledged by the fact that it comes in just one trim level, offers just one V6 diesel engine, and comes with virtually every option available for an E-Class as part of the deal. It all goes some way towards justifying the £58,880 list price, along with the 4Matic all-wheel drive, air suspension and a nine-speed automatic gearbox. 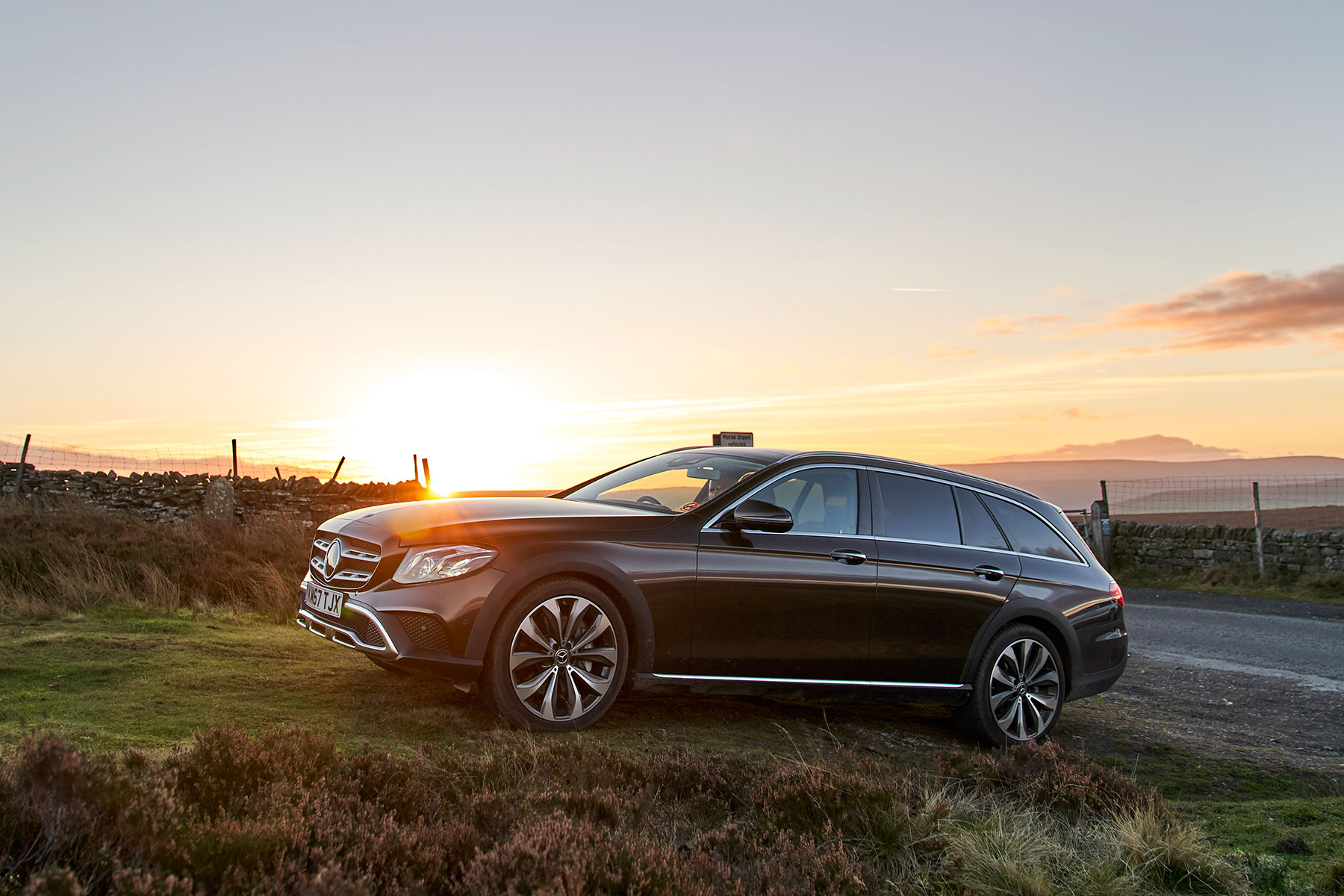 In isolation, it’s hard to notice the extra ride height that the All-Terrain carries over a regular E-Class estate. However, park them side-by-side and the 29mm additional ground clearance of the All-Terrain becomes far more apparent. Part of that is achieved by recalibrated air suspension, but 14mm comes from the fitment of sizeable 20-inch alloy wheels wearing surprisingly low-profile tyres.

Despite being so jacked up, the All-Terrain manages to avoid looking like it’s on stilts. Hard-wearing black plastic trim surrounds the lower edges of the bumpers, and also covers the wheelarches and sills, giving some protection should you get carried away while off-road. Mercedes has also fitted a grille design more commonly used on its SUVs, while silver lower bumper trim alludes to the underbody protection panels.

It all adds up to a subtle impression of off-road ability, but without the obvious ostentatiousness of an equivalent SUV. 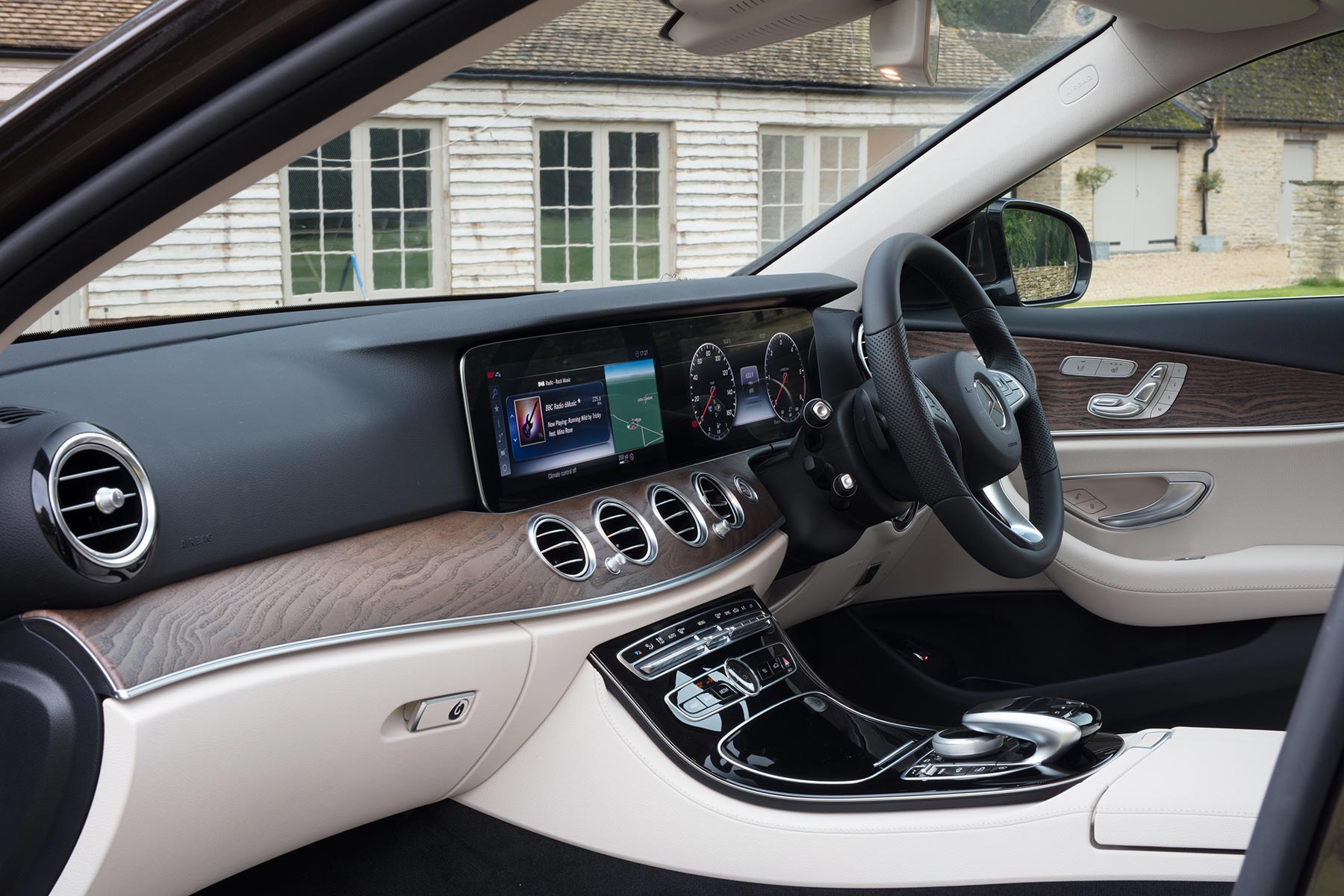 If the changes to the exterior of the All-Terrain are subtle, on the inside you’ll need to be a serious Mercedes-Benz nerd to notice the difference.

The only major one is the option of a silver carbon fibre trim, although this can be replaced with wood or metal if desired. As this might suggest, the All-Terrain majors on luxury, so don’t expect the ability to hose down this interior should you get it dirty. Brown leather seats do help hide the mud, though…

While clearly not utilitarian, the cabin of the All-Terrain reinforces just how good the E-Class interior is. With a standard widescreen 12.3-inch digital display, it’s akin to having a skateboard-sized iPad strapped to the dash. It’s possible to spend hours configuring the digital instrument dials to your liking, and the infotainment and navigation systems are also neatly integrated.

Also standard is the ‘Dynamic Select’ dial, offering the usual choice of Sport and Comfort modes, along with the model-specific All-Terrain setting. Selecting this displays information such as slope angle and steering position, making off-roading that little bit easier.

Standard 40-20-40 split-folding rear seats and up to 1,820 litres of luggage space prove the All-Terrain is still a serious load-lugger. Even with all rear seats in use, there is still the potential for 670 litres of boot space.

Helping meet the expectations created by the price tag are an impressive Burmester sound system, heated and electrically adjustable front seats with memory function, parking sensors, keyless entry and an electric tow bar that hides beneath the rear bumper. 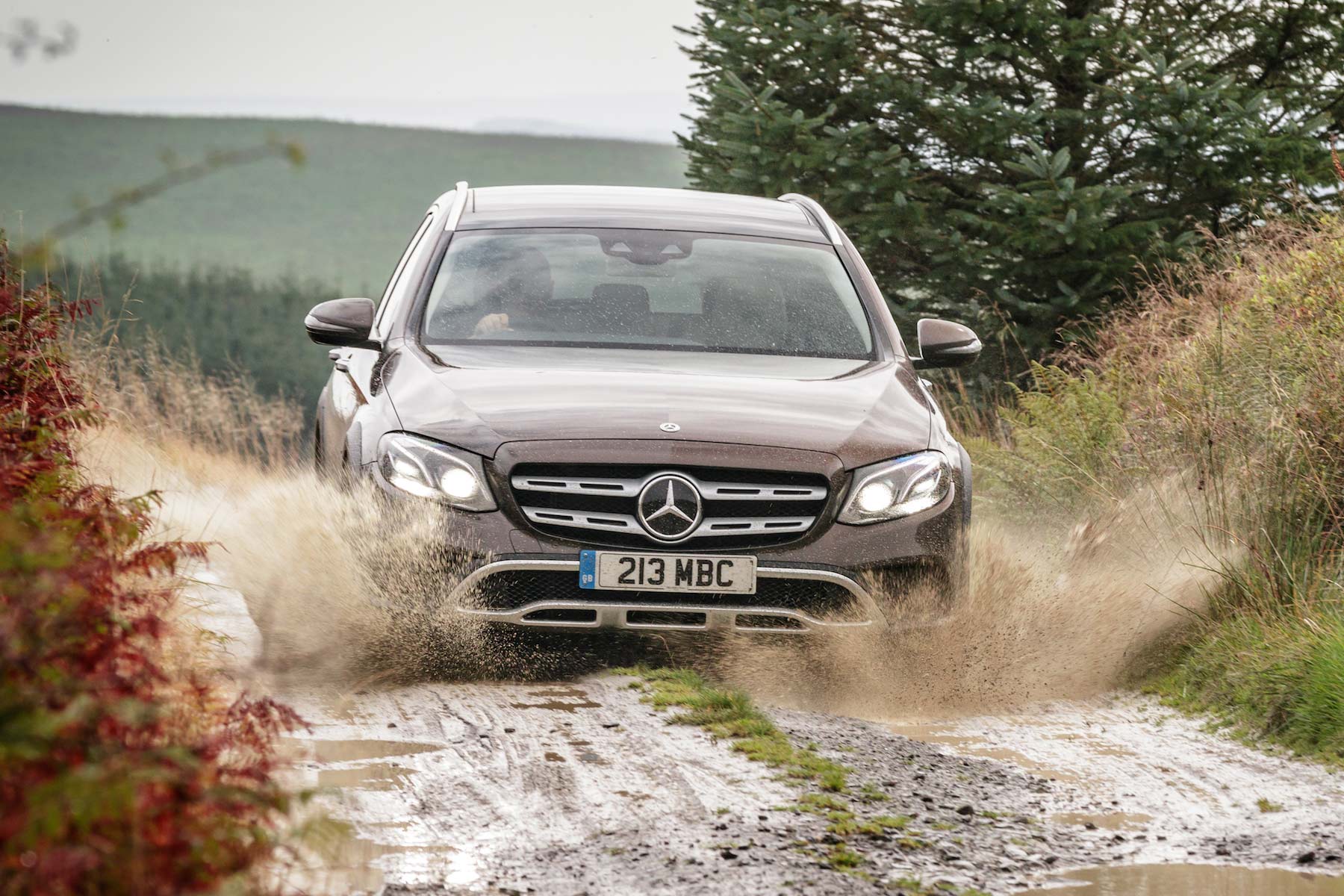 ‘Effortless’ is the word that sums up the experience of driving the E-Class All-Terrain. In fact, it’s so accomplished that it manages to make the driver feel like the least efficient part of proceedings. This isn’t a criticism, but recognition of just how seamlessly the first few minutes behind the wheel flow.

Diesel might be a dirty word today, but the 3.5-litre twin-turbocharged V6 unit in the All-Terrain is a reminder of how good derv power can be. With 258hp, plus 458lb ft of torque on offer from just 1,600rpm, it demolishes any concerns about the impact of the All-Terrain’s hefty 2,010kg kerb weight. The acceleration is as relentless as the 6.2-second 0-62mph time suggests, and there is no concern about reaching the 155mph limiter.

The nine-speed automatic gearbox switches ratios almost seamlessly, again aiding the feeling of unburstable progress. It also goes some way towards reaching the claimed 41.5mpg fuel economy and corresponding 179g/km of CO2 emissions, but there is only so much it can do against a sizeable all-wheel-drive estate.

Likewise, the Air Body Control air suspension has to fight the mass involved, and does so pretty well. In ‘Comfort’ mode there is a degree of body roll, but stiffening things up in ‘Sport’ removes this and adds additional weight to the steering. It’s unlikely the average All-Terrain driver is going to attack the Nurburgring, but it can certainly be hustled to make progress with little effort.

On-road ability is only dampened by the 20-inch alloy wheels, which transmit the worst ruts and bumps back to the driver, plus a degree of tyre noise from the sizeable rubber.

Mercedes was keen to demonstrate just how capable the All-Terrain is off-road, and again it made tackling country tracks and unsurfaced roads across the Yorkshire Dales completely straightforward. Switching to All-Terrain mode not only lifts the ride height by 20mm, but also adjusts the stability and traction control systems. It doesn’t deactivate the parking sensors, though, which can get unduly concerned when tackling the deepest of ruts and trails.

The only downside to All-Terrain mode is the fact that it can be only used at speeds of up to 19mph. Exceed this, and the air suspension begins to lower again. Not ideal when straddling a deeply-rutted track…

Despite wearing road-biased tyres, the All-Terrain was able to tackle steep muddy slopes, even while towing a twin-axle horsebox carrying 250kg of ballast. A hill-hold function allows it to come to a dead stop on a steep slippery slope, and pull away again, even with the substantial weight attached.

It’s all impressive stuff, and proves that the All-Terrain is more than just a lifestyle accessory. Instead, it’s a luxury vehicle capable of easily covering 90% of the ground an average SUV owner might encounter, but with fewer drawbacks. 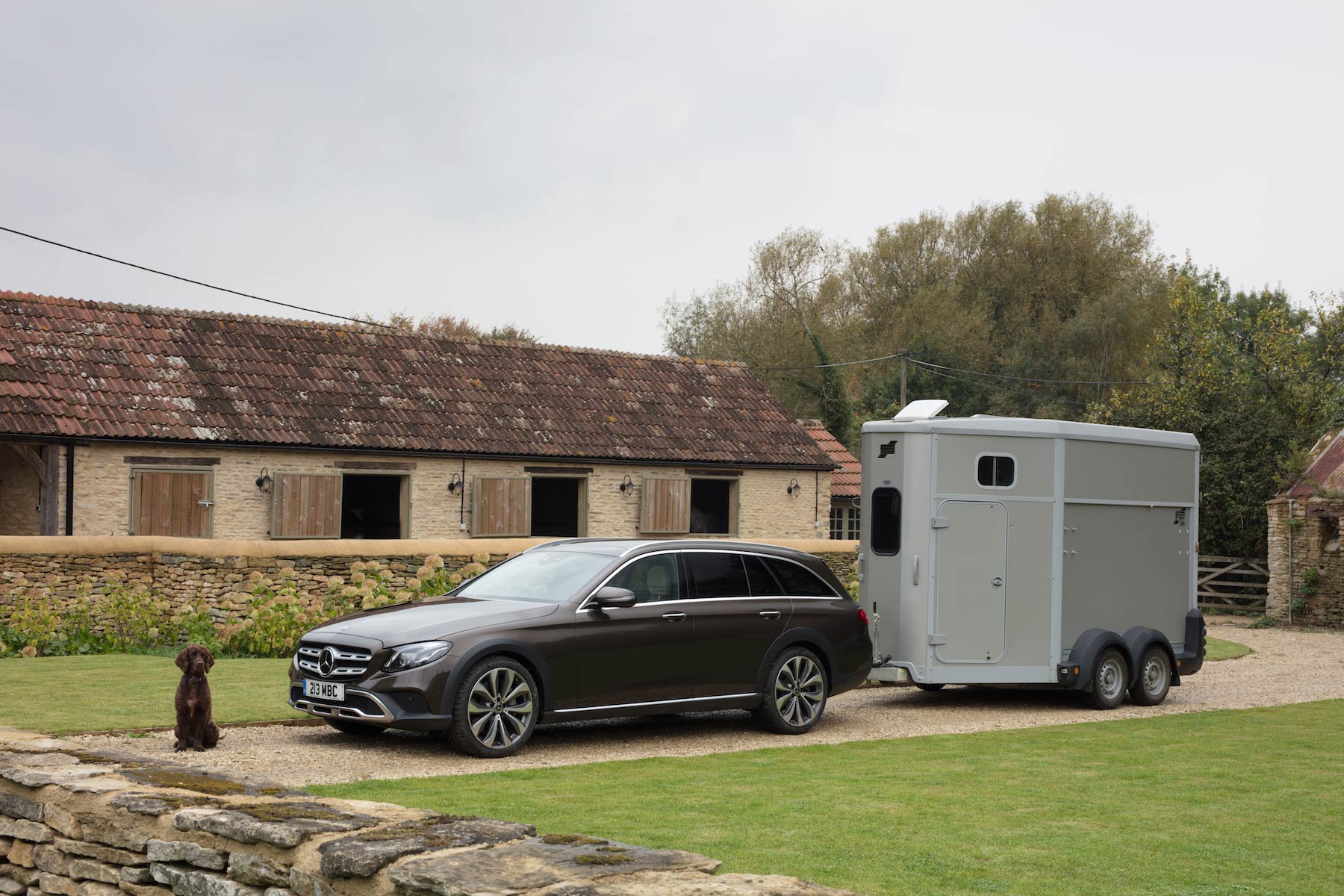 The E-Class All-Terrain is a seriously accomplished car. Combining luxury, practicality and formidable performance both on- and off-road is no mean feat. The level of engineering and design have gone beyond simply adding a few inches to the ride height of a normal E-Class Estate, and the All-Terrain is resolutely impressive as a result. Mercedes may have been late to the off-road estate party, but the end product is perhaps better for it.

Although the starting price of £58,880 might seem hard to swallow, it actually represents better value than the equivalent Mercedes-Benz GLE SUV, thanks to the comprehensive level of standard equipment provided. There is also the added bonus of not contributing another SUV to the roads, something money cannot put a price on.

In fact, that is what gives the E-Class All-Terrain its ultimate appeal. This is an ‘old money’ car, for those who don’t care about impressing others with the biggest new SUV on offer. Yes, it’ll still go off-road to an extent, and has the dependable image the Mercedes badge brings, but it’s less shouty than the obvious off-roader rivals.

Clearly, the cost and off-road estate style mean it will only appeal to limited demographic in the UK, as will the single diesel engine. But those that pick the All-Terrain will genuinely be getting all the car they ever need.