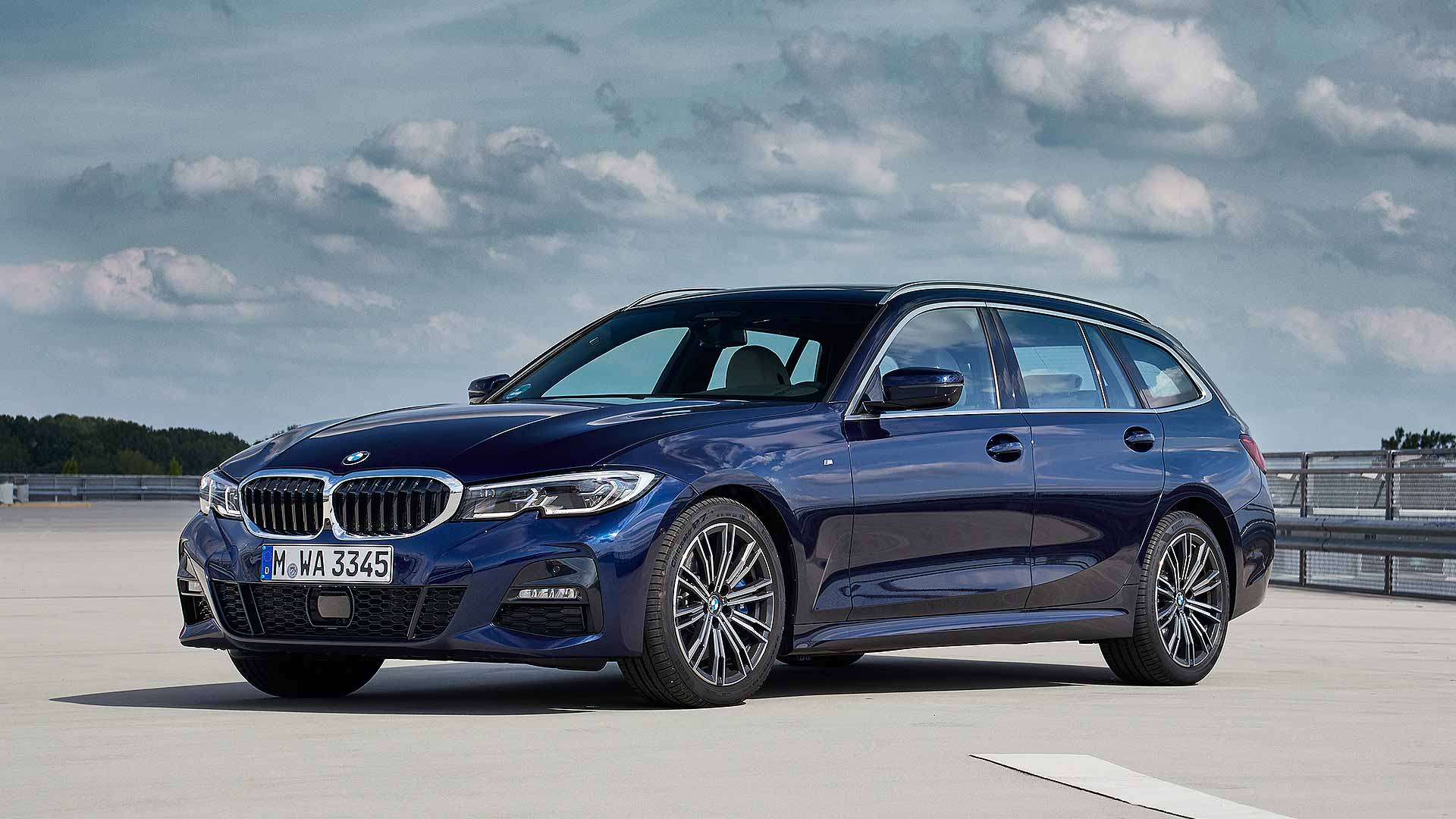 The BMW 3 Series Touring estate was invented in 1987 by one of the company’s engineers in his spare time. Management liked his work with an angle grinder on a 3 Series saloon and, more than three decades later, 1.7 million sales are testament to his vision. The last version of the 3 Series Touring alone managed 500,000 sales.

This all-new one is no radical revolution. It’s such a popular model in Europe (two in three German 3 Series buyers choose the Touring; in the UK, it’s one in four, or 10,000 cars a year), BMW will never do anything silly.

Instead, it’s built in a surprising amount of sensible features that, were it a Skoda, would fall under the ‘Simply Clever’ moniker. They’re certainly intelligent enough to give BMW an edge in the everyday usability stakes. 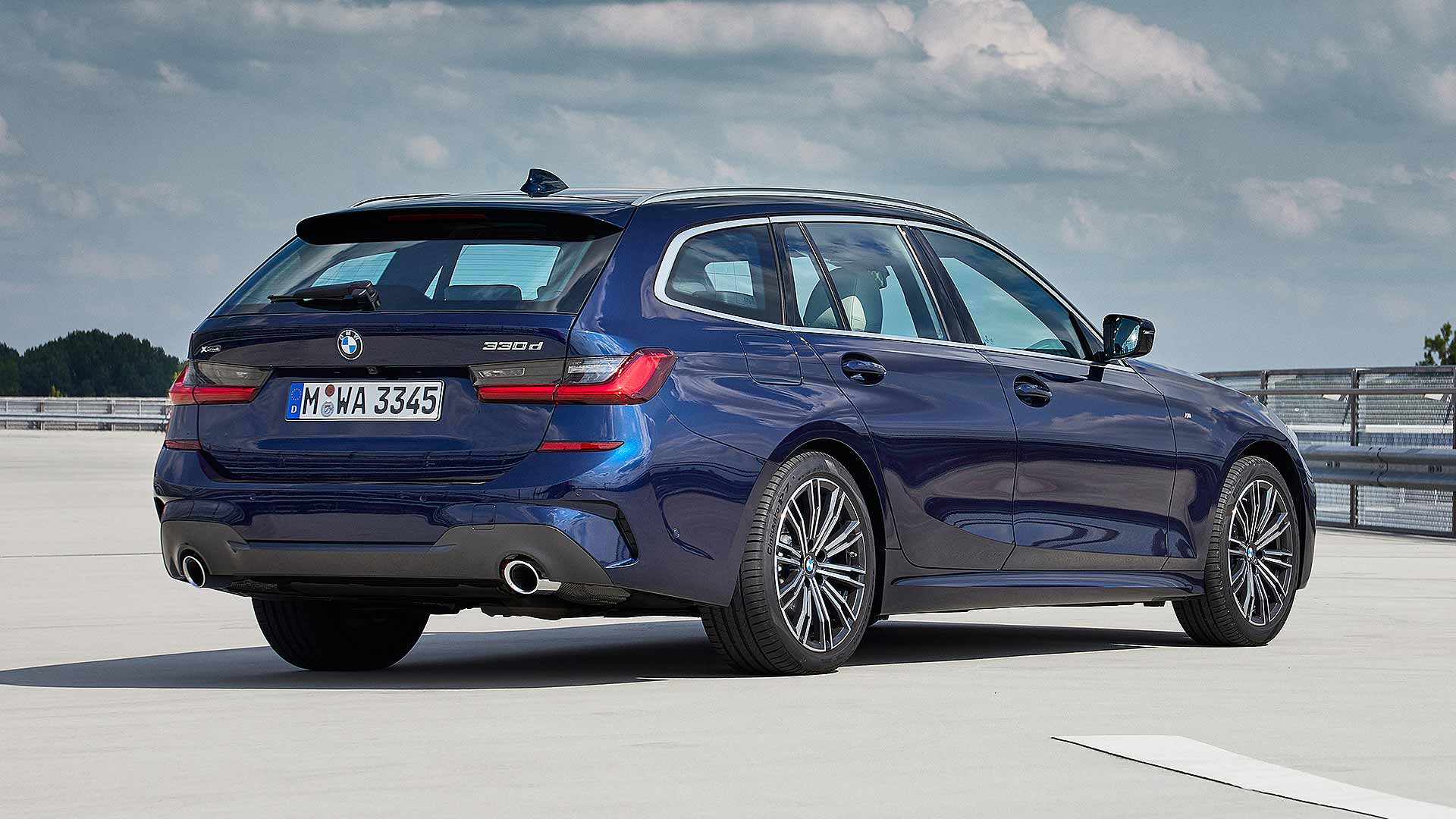 The new model is 76mm longer than the old one, taking it beyond 4.7 metres (the size of a 5 Series just a few generations ago). It’s a bit wider, a bit taller, and the wheelbase is longer.

Despite this, it’s no heavier than the old car, and the body is up to 50 percent stiffer in key areas. BMW says this is important for the driving experience; the engineers on the launch seemed to have a refreshing, newfound obsession with this.

Compared to the familiar Mercedes-Benz C-Class estate and dull Audi A4 Avant, the new 3 Series Touring has an appealing, modern appearance. BMW will sell it in SE, Sport, M Sport and M Sport Plus Edition trims in the UK (prices from £35,235 when it arrives in September), and most will be M Sport. Expect to see lots with big wheels and M-style bodykits, looking at its best. 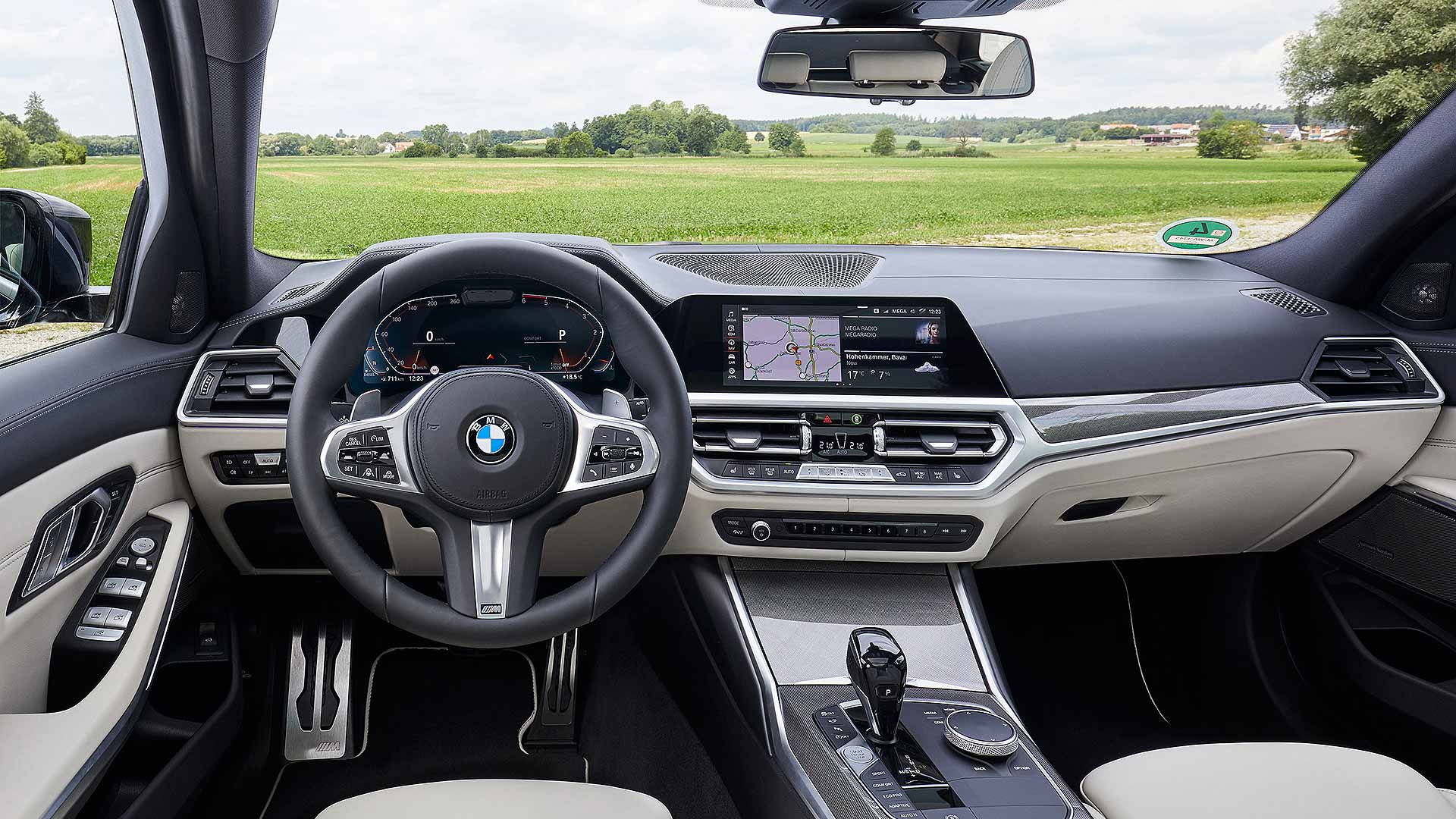 The clever stuff comes inside. Probably too clever by half if you’re looking at the dashboard. Fresh to the 3 Series, I found all the buttons baffling and the twin displays rather overwhelming in information. It’s BMW’s new user interface, called ID7. You can say “Hey BMW” and get it to do stuff via voice activation, but I didn’t master that either. It takes about a week for it to ‘learn you’, I was told. I felt like I needed a week, too.

After the mediocre old car, the interior of the new 3 Series is beautifully finished, all high-end materials and, again, a modern appearance. There’s more space front and back – the rear bench will now accommodate three child seats – and it’s easier to get in and out of. 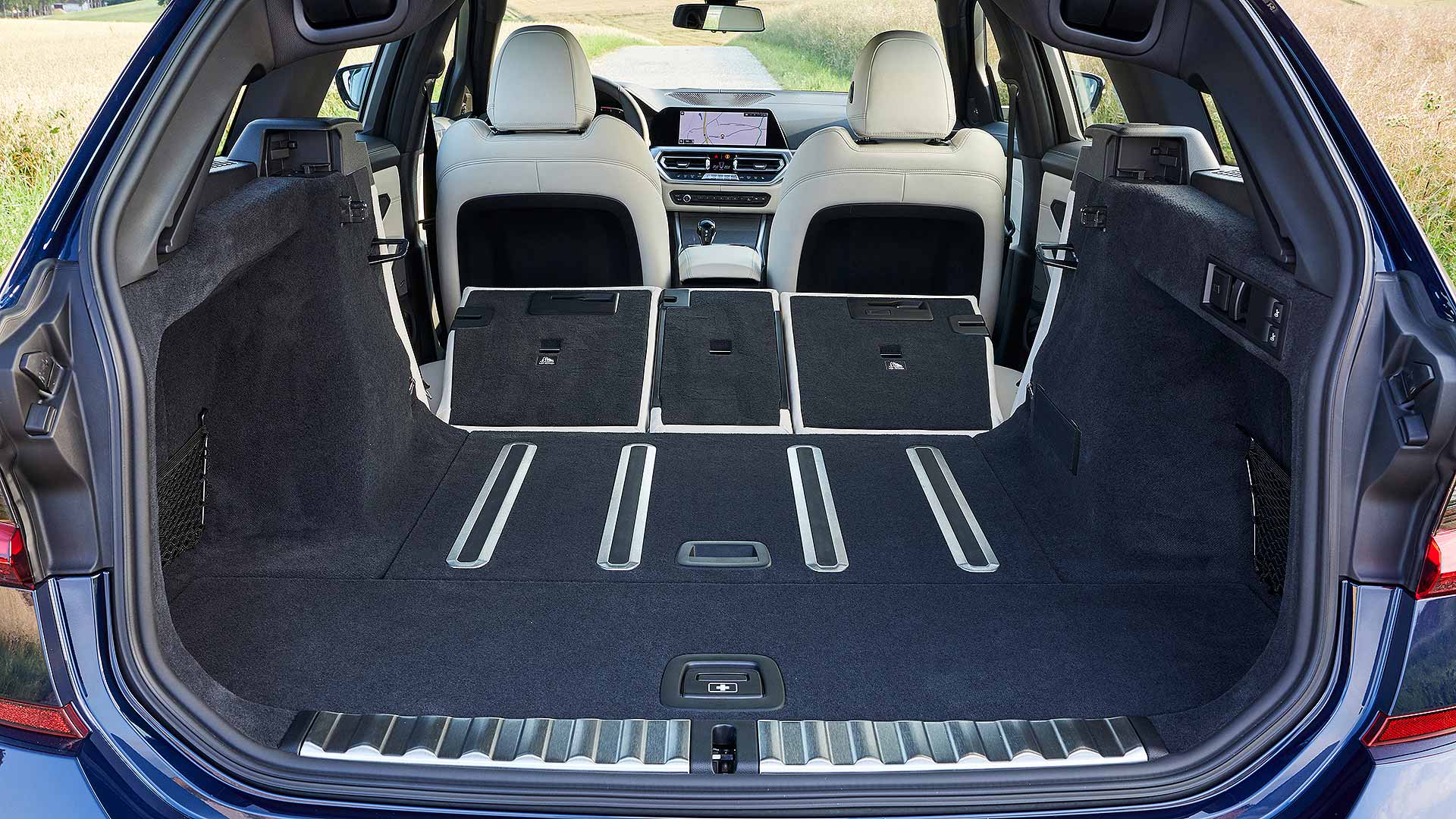 The boot has grown just five litres, to 500 litres, but it’s much better shaped. And the standard 40:20:40 split rear seats fold flat, expanding it to 1,510 litres. Building the standard electric-operation struts into the roof expands the opening and tidies up the appearance. The separately-opening glass window remains, too.

Clever features abound. The load cover has been split into two, and both pieces are child’s play to remove (anyone who’s struggled with the fiddly, heavy device of older models will welcome this). There’s also now somewhere to store it inside the car, with both pieces slotting into a space beneath the boot floor. Hurrah.

Buyers can option remote seat-release buttons, for easy fold-flat operation. The rear window is wider, and an expanded rear-view mirror makes the most of this, giving a panoramic view rearwards, even partly into the side windows. 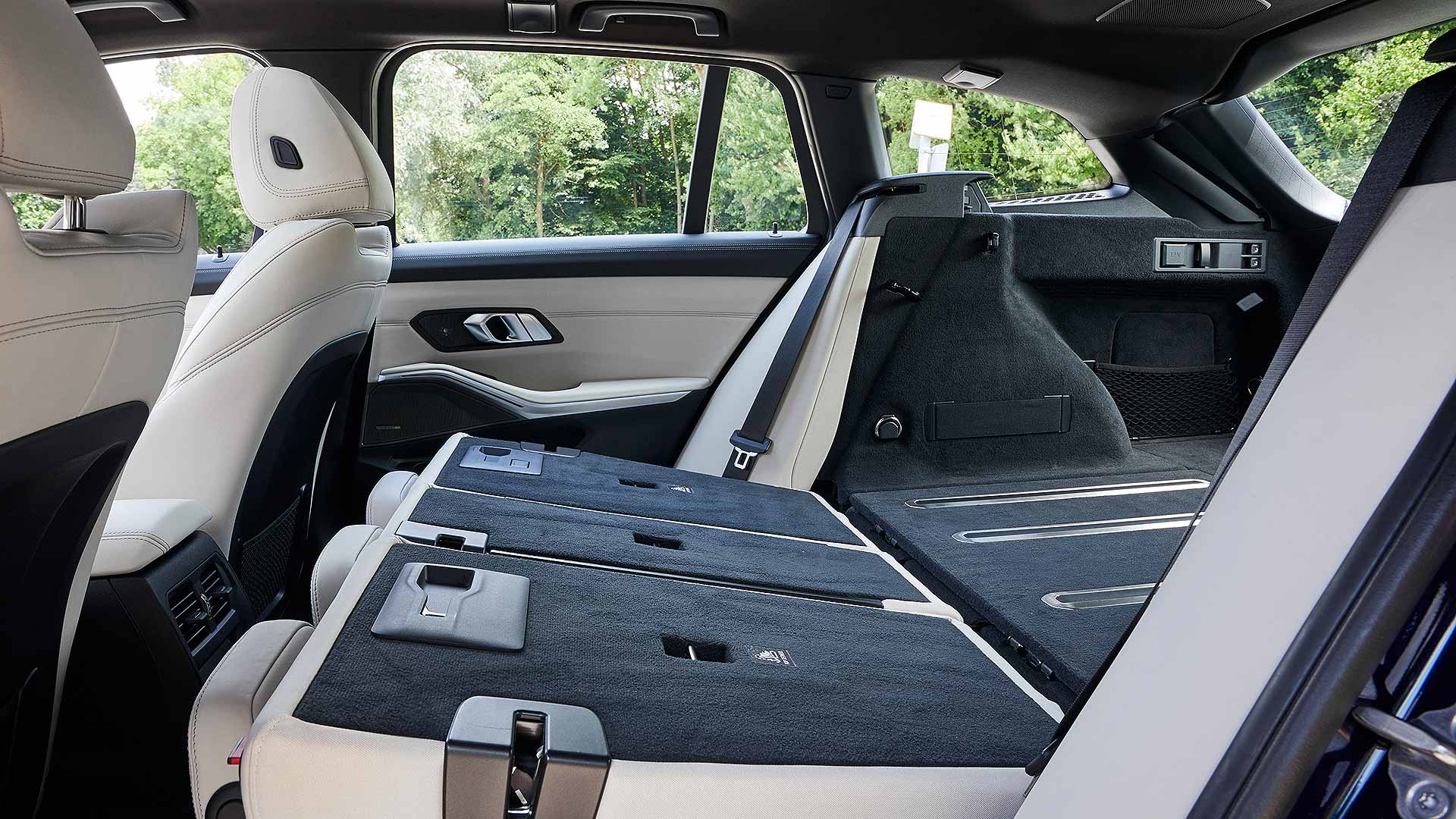 There’s something ingenioushere, too: non-slip rails in the boot floor. They’re optional, and comprise a steel rail with a rubber section in the middle. Boot open, you can load things easily: close it and the centre rubber section raises slightly, holding whatever’s on top of it tightly in place. Brilliant. 3 Series Touring project leader Elke Sonak told me she tried it by placing her iPad on it, then going for a fast drive. “It didn’t move.”

So it’s a pleasure to live with, and peerless for practicality in its class. To drive? Most will, still, be diesel, with the 318d and 320d taking the bulk of sales. There’s a 320i and 330i for those fully out of love with diesel, and a wonderful-sounding M340i xDrive coming later. 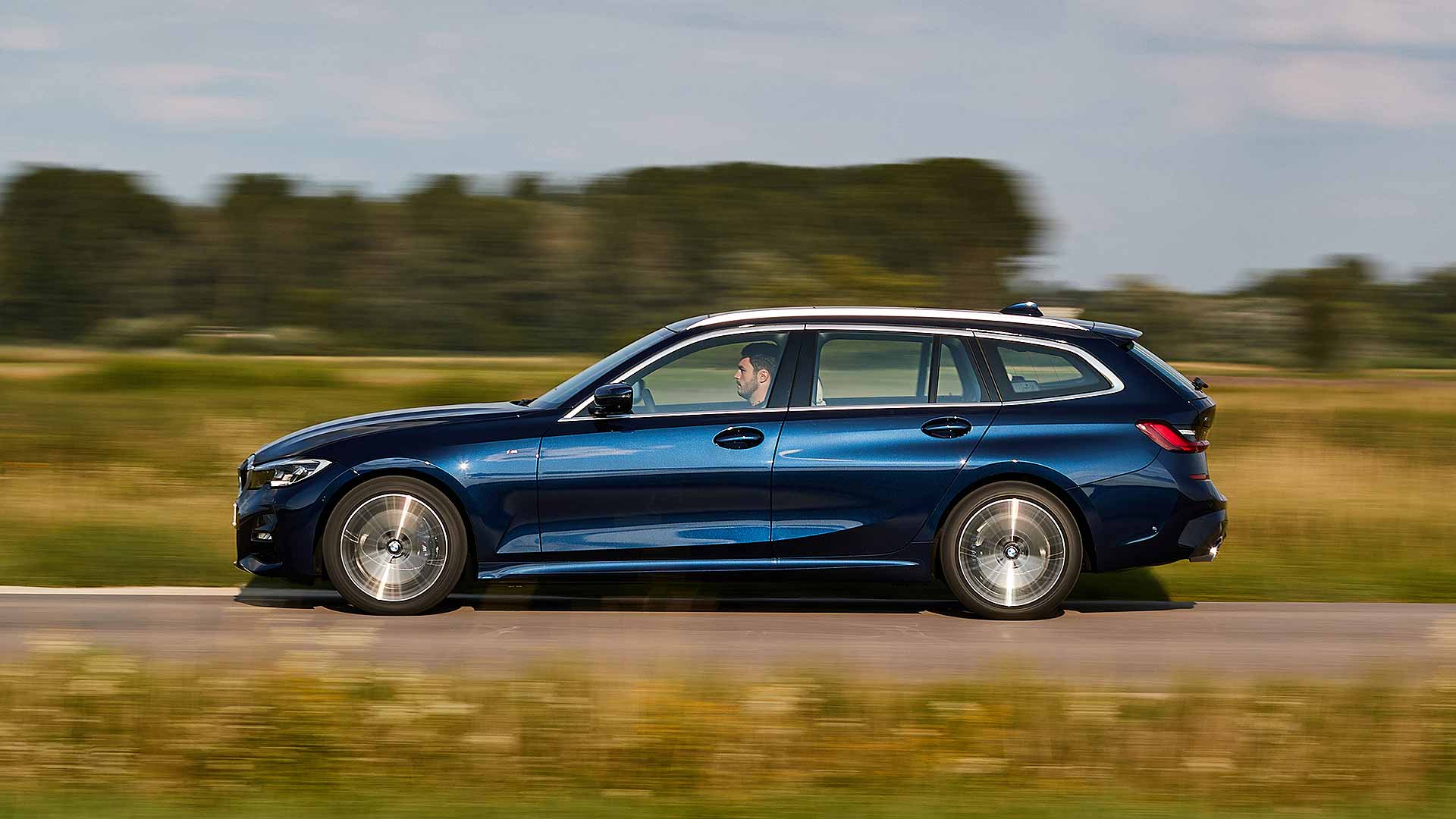 It’s a beautiful engine. BMW has tuned out the roughness of the old car, but kept the classic six-cylinder hum and harmony.

At a cruise, it stays silent, and it’s effortlessly soothing and powerful. A genuine continent-crusher. Diesel still has a place in cars like this; if you really don’t agree, the first 3 Series Touring plug-in hybrid comes next year. 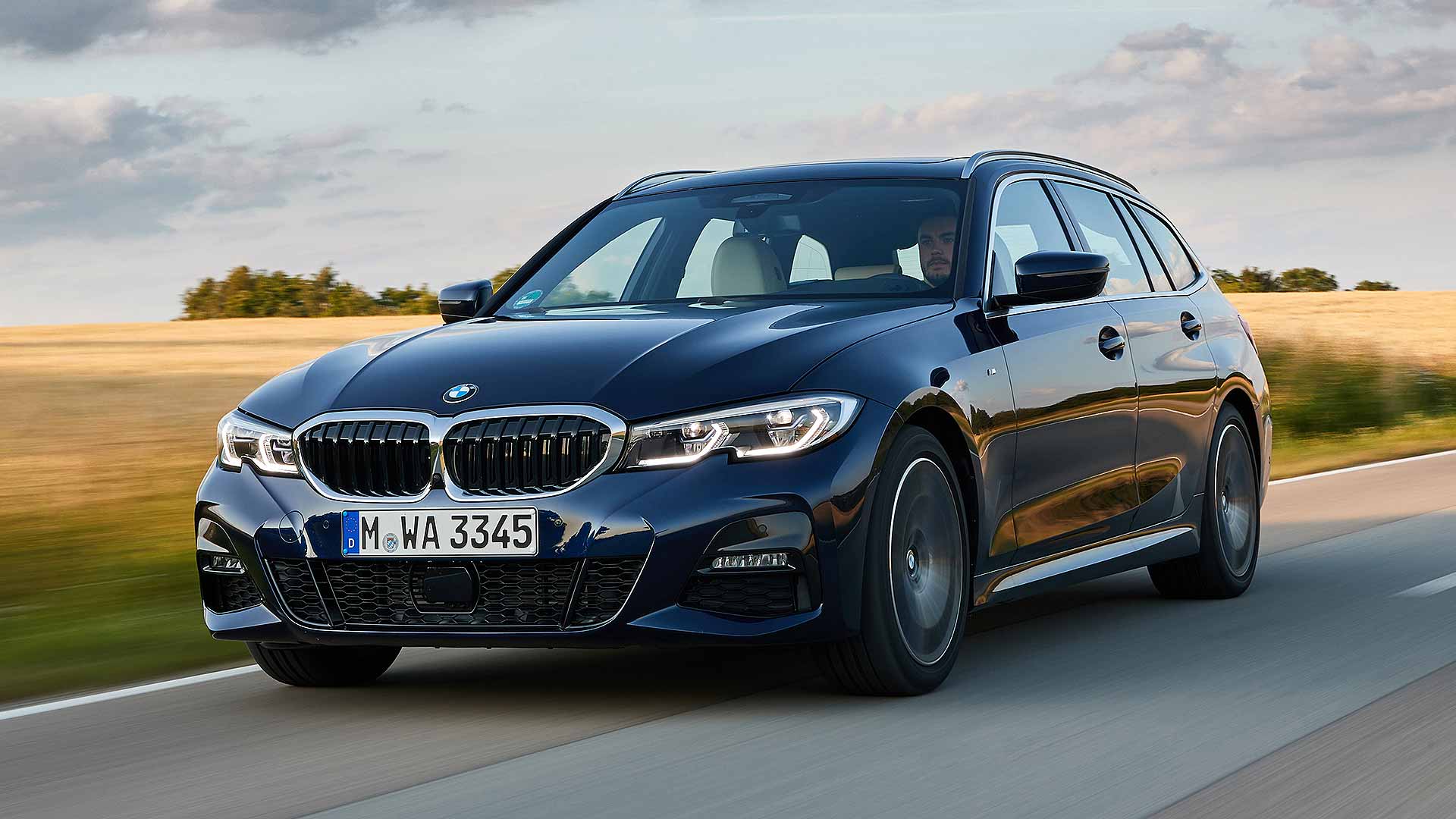 Of course, it drives immaculately, too. The ride is poised and comfortable, steering ultra-crisp and precise, handling engaging and entertaining. It’s a feel-good car even those with little interest in cars will find rewarding and satisfying. Not only is it more capacious and better value than a comparable SUV, it’s simply nicer to drive.

BMW has successfully transferred its 3 Series saloon market leadership into the estate car sector. Not bad for an idea that started, all those years ago, as an after-hours project in a secret shed in Munich.