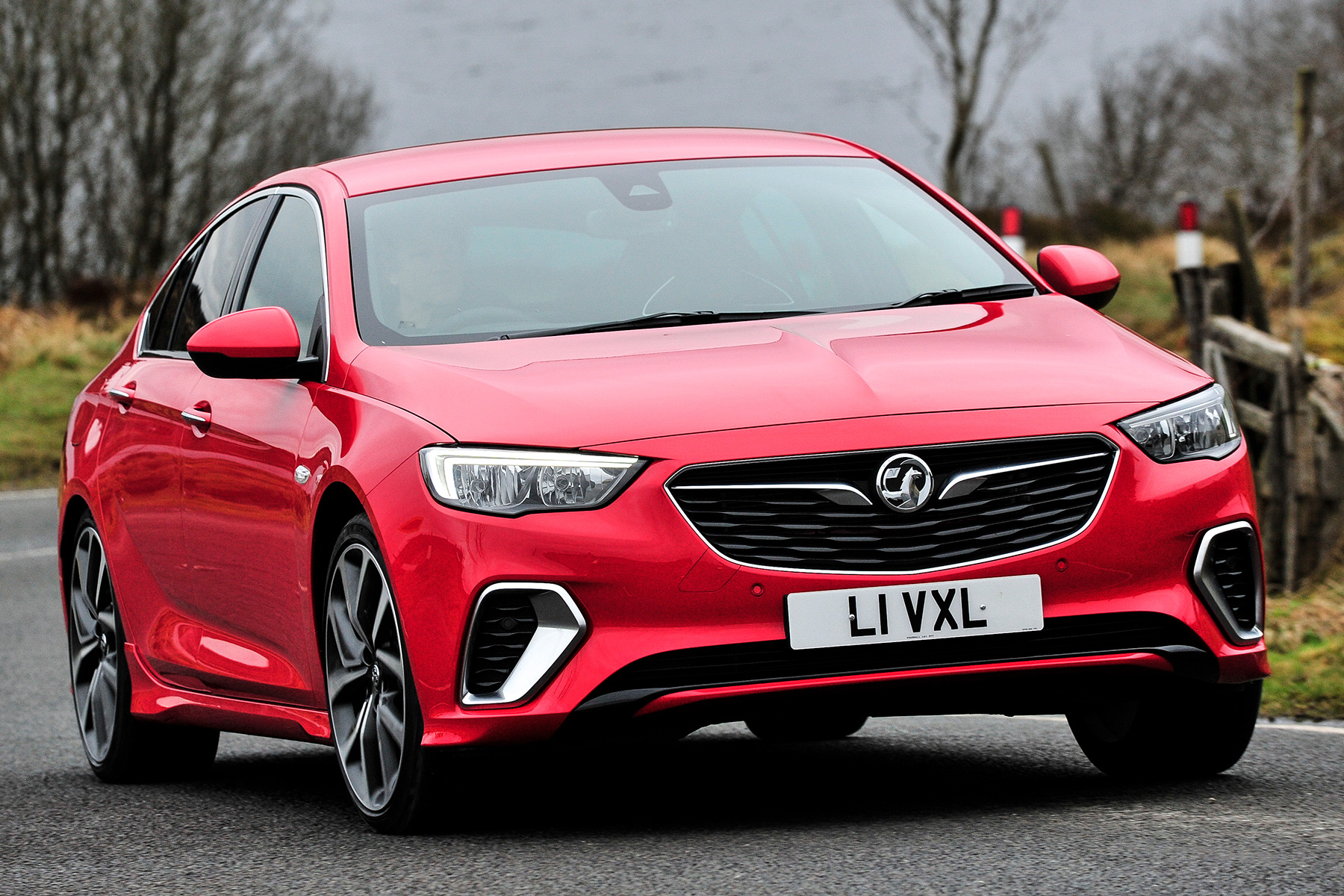 A warmed-up Vauxhall Insignia. Not exciting, on the face of it, but don’t click away just yet. The new Insignia received pretty much universal praise when it arrived last year, and this sporty version has been engineered on the Nurburgring. We’ll come onto whether you should care about that shortly, but the fact that it’s 12 seconds faster around the famous German circuit than the old Insignia VXR – despite being 65hp down on power – is enough to pique our interest.

So what exactly has Vauxhall done to the Insignia to make it worthy of the first GSI badge since the Vectra GSI was canned in 2005? Buyers get a choice of engines available elsewhere in the range: a 2.0-litre petrol engine producing 260hp and a 2.0-litre twin-turbo diesel with 210hp. Fact fans will note there’s no extra power over lesser models in the Insignia range, but Vauxhall says the GSI isn’t about outright power.

There are various cosmetic upgrades, of course, including 20-inch alloys (18-inchers are available in other markets but deemed too understated for the UK), big chrome air intakes at the front of the car and a fairly restrained spoiler at the rear. In standard form, we think the new Insignia is quite a handsome car. The GSI upgrades add to that, although it’d look less in-your-face in a colour other than the bright Lava Red of our test car. 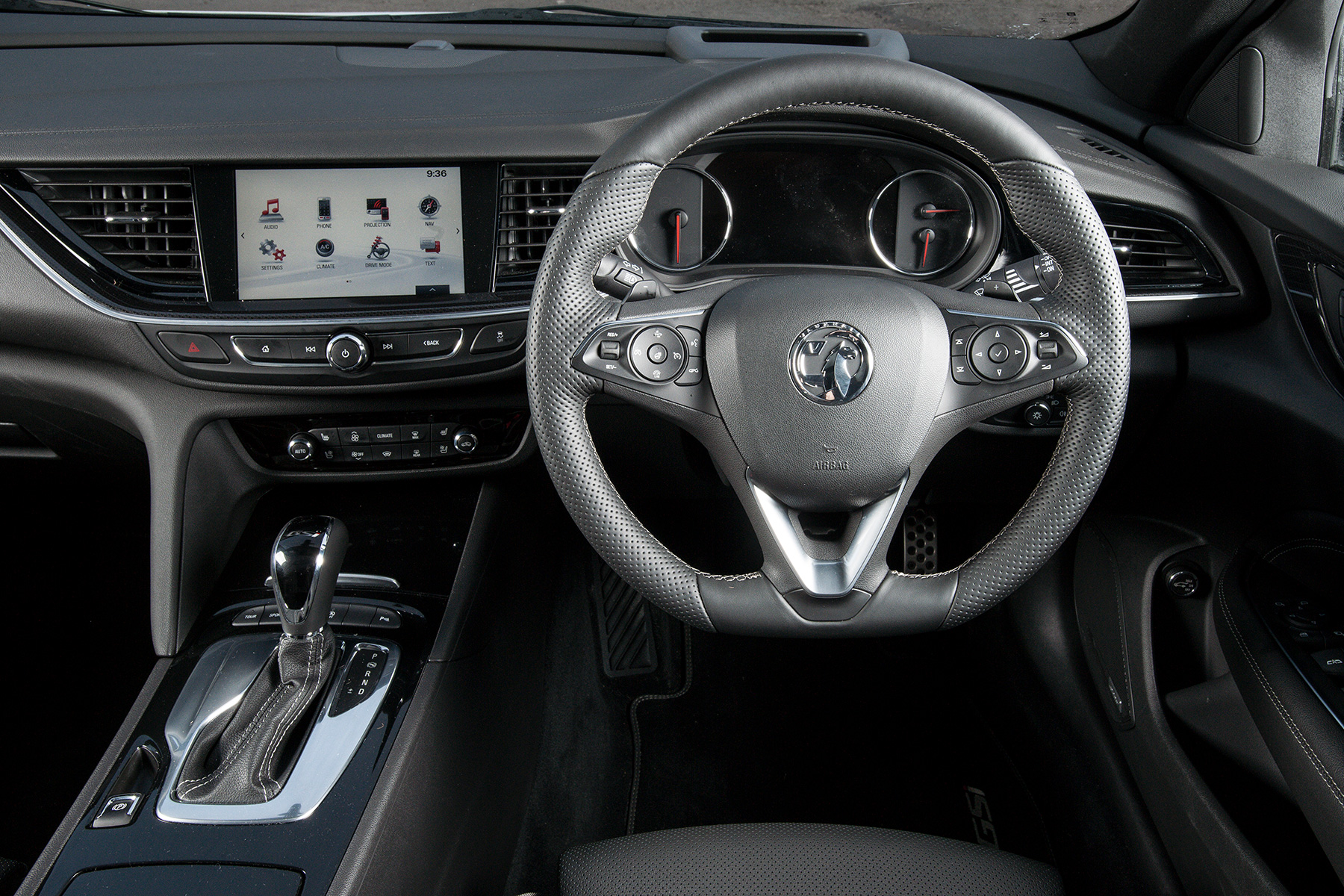 On the face of it, the inside is business as usual for the Insignia, aside from some aluminium pedals and sporty seats developed in-house at Vauxhall with inspiration from the Corsa VXR’s Recaros. Lighter than the Recaros, these standard leather sports seats feature adjustable side bolsters making it easy to get comfortable. As well as being heated and ventilated, they even offer a massage mode. This isn’t exactly a track-focussed, lightweight car.

We’d like to see a few more sporting touches in the cabin – seats and a few minor touches aside, this could be a high-spec repmobile (which, arguably, is exactly what it is). We can’t criticise the spec list, though: there’s an eight-inch touchscreen infotainment system with Apple CarPlay and Android Auto, which works with Bose speakers to provide a premium sound experience. Or something.

There are also myriad driver assistance features including adaptive cruise control and parking sensors (although we’re surprised at the lack of a rear-view camera), while even passengers in the rear get heated seats. 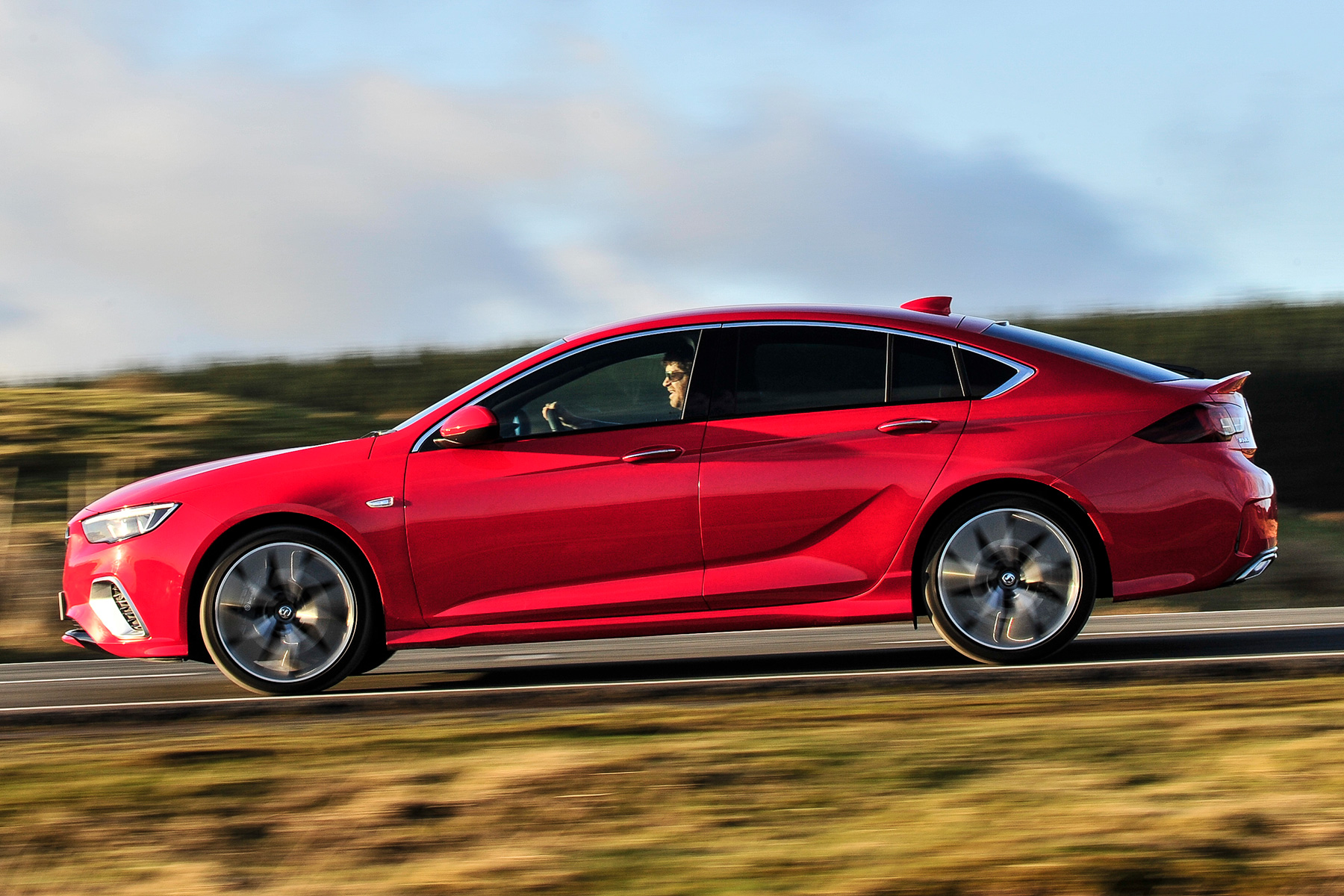 When you hear the words ‘developed at the Nurburgring’, it’s often a pseudonym for rock-hard suspension and over-eager steering. Fortunately, that’s not the case for the Insignia GSI.

There are four different drive modes: Competition, Sport, Touring and Normal. An unnecessary amount, really, tweaking the dampers, stability control and throttle response as well as piping synthetic noise into the cabin to make your four-cylinder Insignia sound rortier than it really is.

We drove the diesel (the sales rep’s favourite, even in 2018) and most of the time were happy to leave it in Normal, but selecting Sport during pacier driving isn’t as horrid as you might expect. Even with the dampers firmed up, it’ll flow pleasantly along broken British roads, and even the fake noise doesn’t get too jarring. In fact, in Sport, the Insignia GSi is quite an enjoyable drive.

Turn the car into a sharp bend and torque-vectoring works with a twin-clutch mechanical diff at the rear to send power to the wheel with the most grip. You can feel it working, a clumsy input of right pedal mid-bend actually tightens things up as the car resists running wide. It’s still, of course, a diesel Insignia, but enthusiastic company car drivers learn there’s fun to be had here. 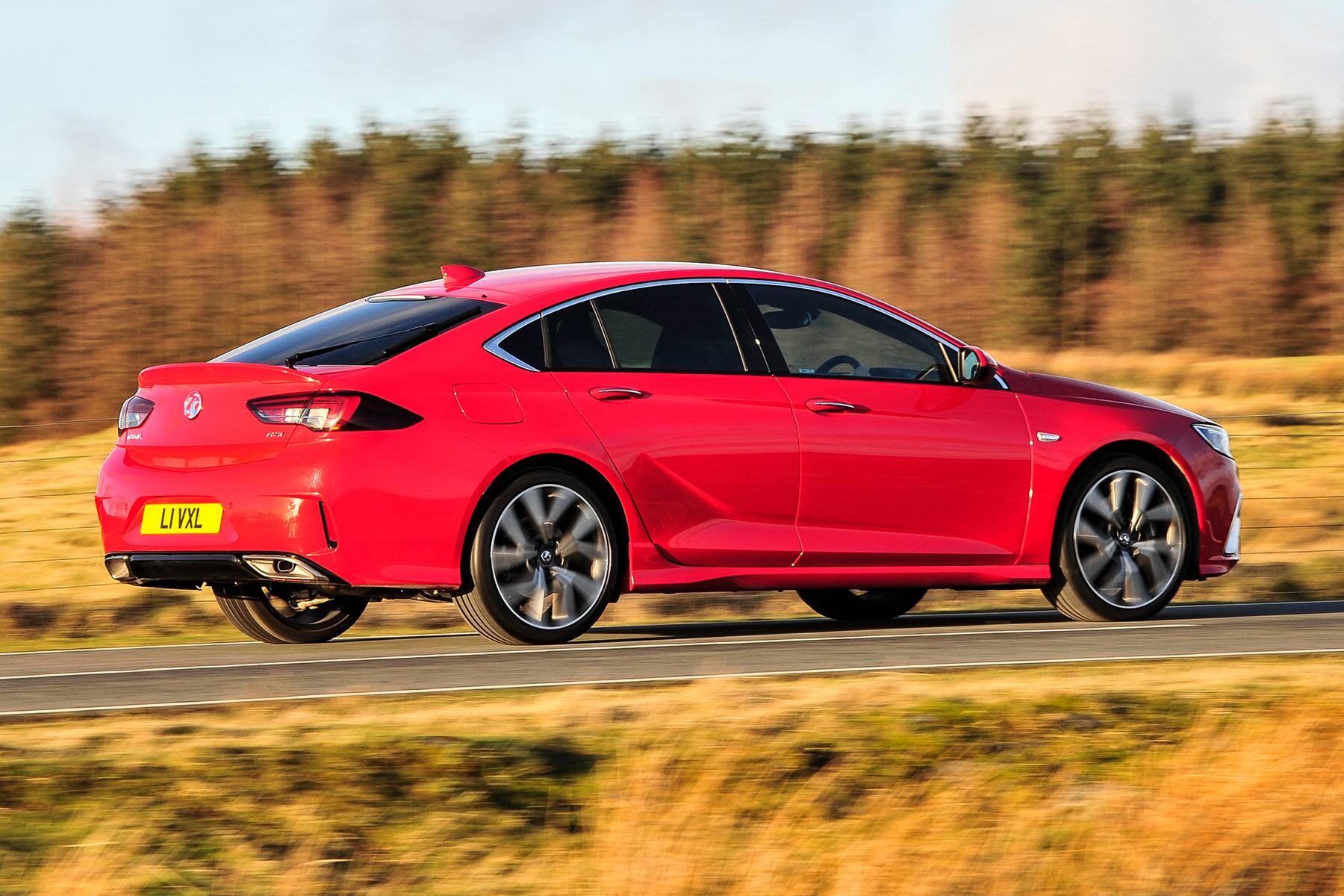 We still think a power upgrade would have been welcome for many buyers, though. A 160kg weight-saving over the first-generation Insignia VXR contributes towards a 7.3 second 0-60mph time (6.9 seconds for the petrol), and although it feels quick, it’s not exactly forceful. Like most modern-day diesels, overtaking is easy thanks to mid-range grunt, but you’re unlikely to ever get the wheels scrabbling as they struggle to handle the power. Perhaps that’s a good thing.

Most Insignia GSIs will spend their time on the motorway, but we did manage three laps of Bruntingthorpe to play around with the Insignia’s Competition mode. A few taps of the ESP button turn it off entirely, allowing the rear-end to pivot around the front axle when hard on the brakes. It’s fairly neutral, though – despite sharing a GKN Twinster diff with the Focus RS, this isn’t exactly a drift mode.

More importantly, the Insignia GSI is perfectly relaxed on the motorway. Wind and road noise are fairly subdued at 70mph, and the dampers left in Normal mode provide a cosseting ride.

You could look at the Insignia GSI as nothing more than a lazy attempt by Vauxhall to renew interest in last year’s model. In essence, it offers company car drivers a few sporty trinkets without the tax and fuel economy penalties incurred by providing any form of performance upgrade. Think of it as a BMW 118d M Sport of the mainstream D-segment.

But it’s more than that, really. It’s a fairly polished attempt at turning the fleet driver’s favourite into a driver’s car using methods other than simply giving it more power. Fast Vauxhall enthusiasts will be better off waiting for the new Insignia VXR (although we don’t know when that’s going to arrive) but, for now, this is a pretty impressive high-spec, slightly sporty Insignia.

There is, of course, a catch. Prices start at £32,975 (that’s for a diesel hatch), while you’ll pay £34,875 for the estate version in petrol flavour. That’s a significant amount of money – a premium of more than £4,000 over high-spec Insignias – especially when you consider the likes of Kia’s hot new Stinger can be had for similar money.