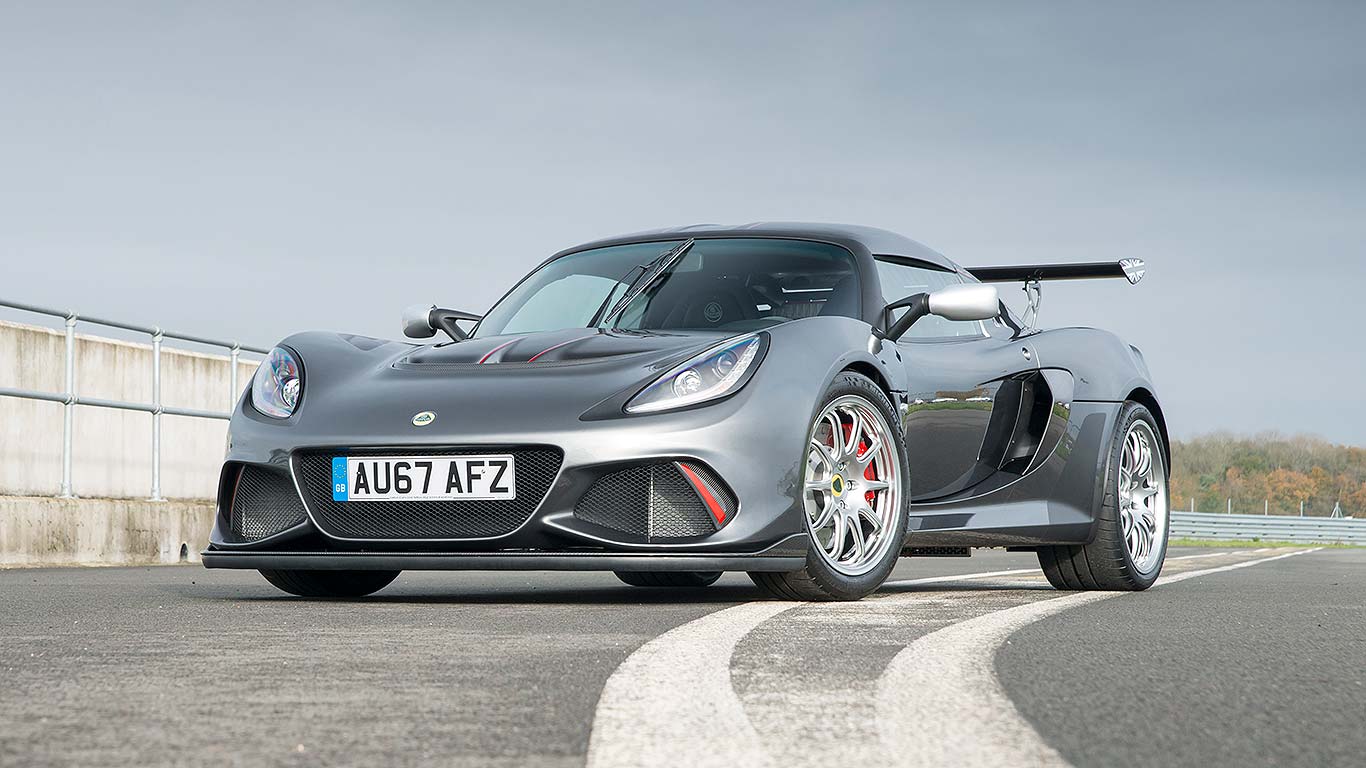 “This is it,” says Lotus CEO Jean-Marc Gales. “We won’t be revealing another one in a year with more power. This is the ultimate Exige.” And with a full 430hp powering a bonded aluminium platform that, in the original Elise, housed just 118hp, who’s going to quibble?

But Gales, for now, insists there will not be a Cup 450. For the remaining two years of Exige production, this will be the pinnacle, the ultimate Exige. And to reinforce the point, production is unlimited, rather than being capped to 50 units, or 80 units, or so forth.

That’s great news for those who want, literally, the fastest point-to-point supercar in the world, he reckons. Ferrari, Porsche and Lamborghini owners, listen up: nothing can keep up with this new Cup 430 on a twisting B-roads, he reckons. “This car has no rivals – inside or outside of its price bracket.”

It’s 13 percent more powerful than the Cup 380, thanks to an almost entirely new engine set-up lifted from the Evora GT430. It also has 220kg of downforce at its top speed, does 0-62mph in 3.3 seconds and its 180mph top speed is limited only by the amount of downforce it generates – it could go much faster still.

Which is why it’s not cheap, at £99,800 (just a few options takes you deep into six figures). But, says Gales, “there isn’t another car on sale that can match the new Exige Cup 430; it will go down as a ground-breaking car in the history of Lotus.”

Duly full of anticipation, we hit the Group Lotus Hethel test track, whose lap record it has now shattered, before later taking to the Norfolk B-roads Gales insists the new car is the king of. 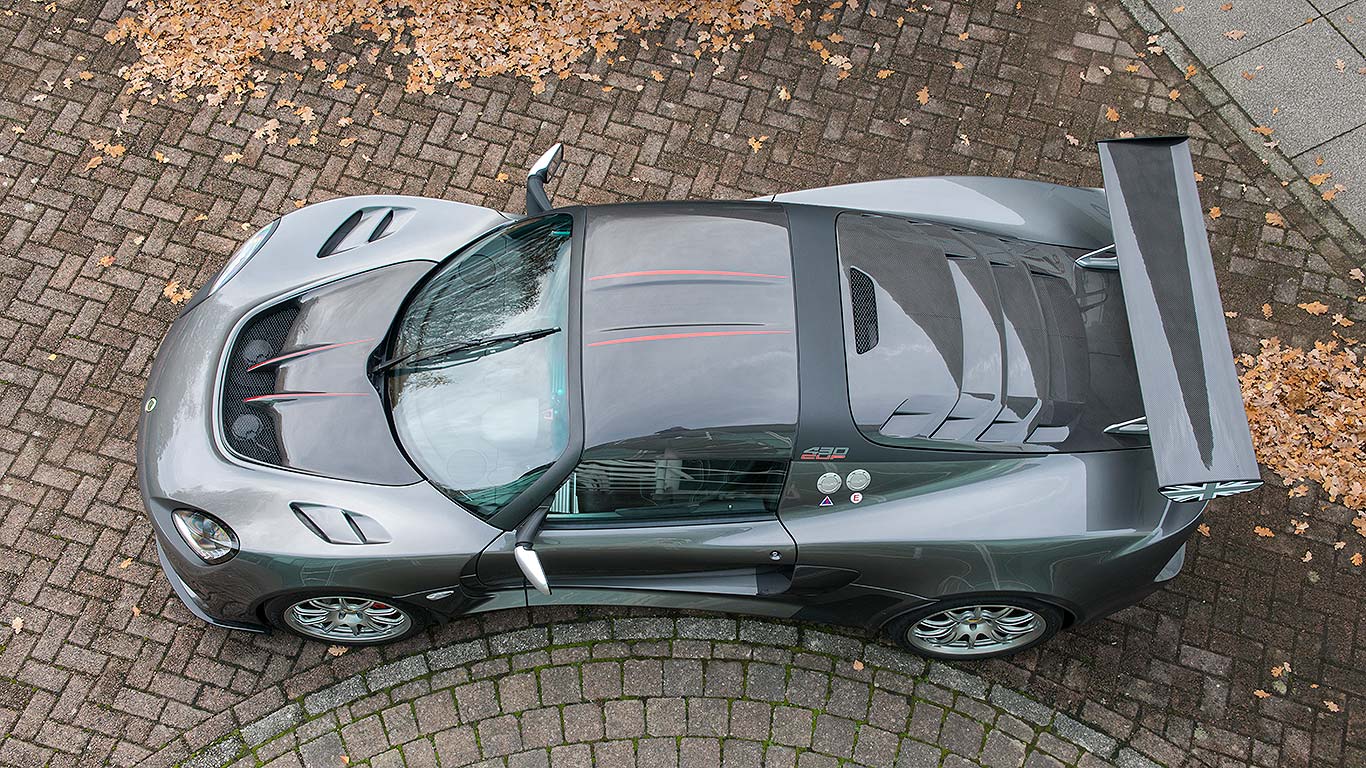 Lotus simply can’t stop evolving its cars. For the Cup 430, the Exige gets another all-new front clamshell, with a reshaped front intake, repositioned numberplate and carbon fibre side air vents. The front splitter is significantly larger, which ups the downforce over the front wheels to 45 percent. So that’s 100kg pushing the front down, and 120kg at the rear.

The side barge boards are no more, but the carbon fibre side pods remain, while the carbon fibre rear wing is higher, to boost downforce, plus there’s a new aluminium rear diffuser that’s 1kg lighter and looks cooler. A titanium exhaust pokes through it: this cuts 10kg from beyond the rear axle, and also looks very cool, particularly after a few heat cycles give it a purple-blue surface finish.

Also cool are new Nitron three-way adjustable dampers, replacing the former Nitron two-way dampers. The extra degree of tuning adjustment is a feature enthusiasts will adore, adding a whole new dimension to living with a Lotus. Expect ‘click-map’ settings to be shared and argued over on Lotus forums.

There’s carbon fibre everywhere: front splitter, front access panel, rear diffuser surround, sidepods, tailgate, wing, even the instrument binnacle cover (which is not lacquered, so it doesn’t reflect in the windscreen). All of this helps cut the car’s dry weight to 1,059kg, or 1,056kg if you delete the airbags.

It could have been lower still, but the Toyota-sourced 3.5-litre V6 engine has been given a new supercharger, from Edelbrock, and a new water-to-air chargecooler. Gales says squeezing this Evora motor into the Exige was a real challenge, which you can tell from the way the bright red induction cover looms large in the rear view mirror.

Kudos to Lotus here, both for the engineering effort, and dressing the engine to look like that from a 1980s Lotus Esprit Turbo SE. 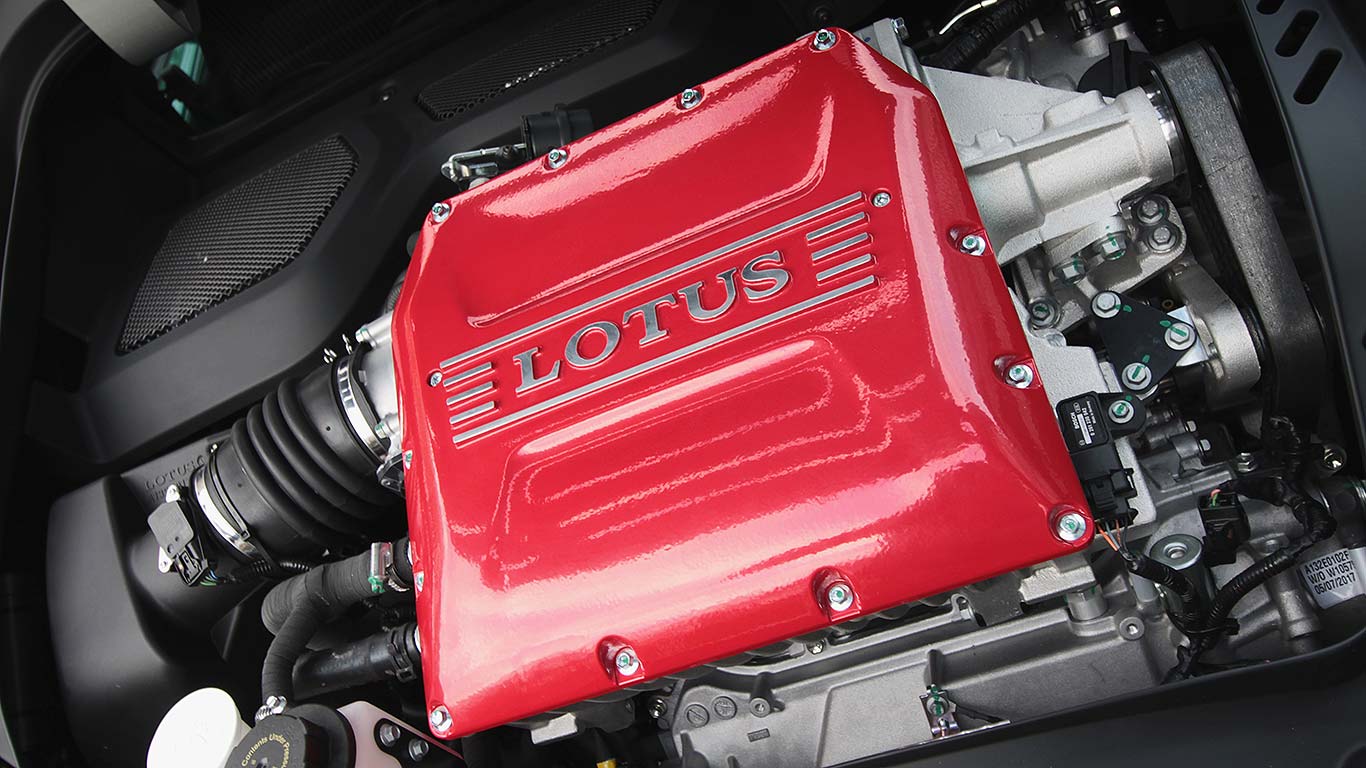 Power is up and 325lb ft of torque is now produced at 4,000rpm; you sense the former when going hell for leather but it’s the boost in torque that really adds to its real-world speed, reckons the boss. And a dazzling Hethel lap time of 1:24.8, faster even than the radical Lotus 3-Eleven. 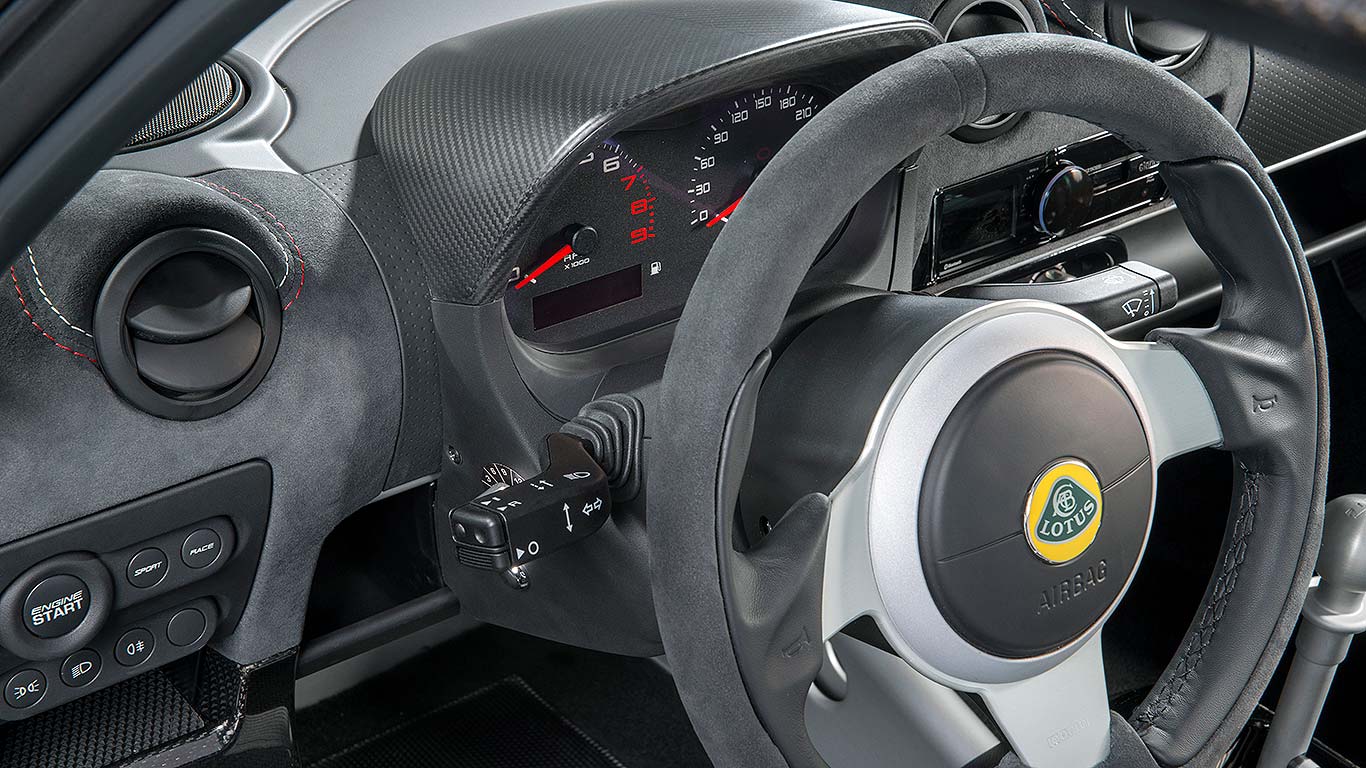 There are fewer obvious changes inside. Lotus’ ongoing quality drive of recent years is much in evidence, with a real feeling of integrity and promise of no leaks when it rains. It is robust, tactile and now an object of real value.

Getting in is still a bit awkward; that’s never going to change on this generation of Exige and Elise. But once there, it somehow feels like you’re sitting more rigidly, and the seats allow a more tailored driving position. Is this mere imagination?

No it’s not. Lotus has installed some new seat runners, ditching the age-old ones derived from the original Elise and fitting tough new items that are more accurate and mean the seat no longer ‘rocks’ slightly. They’re also 1.2kg lighter overall.

You’re already in a good frame of mind from the beautifully finished paintwork, immaculate carbon fibre and details such as a motorsport-grade T45 steel rollover bar, then. Time now to find out how £100k of Exige feels. 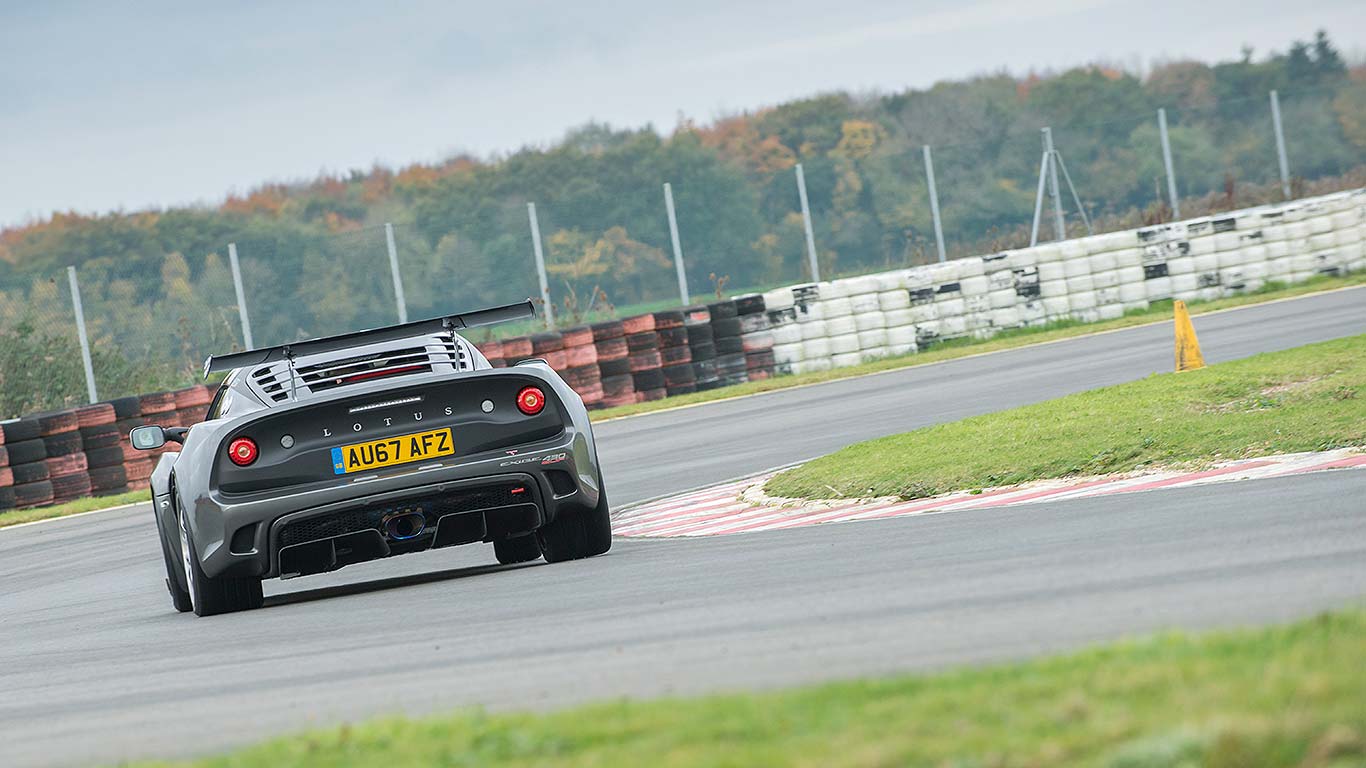 First to the track, which I thought I knew pretty well, until I discovered how ludicrously fast the Cup 430 can drive it. I had to fully recalibrate every braking point, turn-in point, power-on point; it goes harder, grips stronger, brakes better… throwing everything out of the window, basically.

It’s easy to get into the groove though, so fully does it flood the driver with feel. Only if you’re truly foolhardy will nasty tricks scare or bite you; otherwise, limits are well-telegraphed, sufficient warning given that you’re approaching the limits, usually of your car control, rather than the car’s.

Because it’s so fast, I’m often driving far below the limits in corners, despite tackling them faster than ever. This is where the engine’s extra torque comes in, to boost me back up to speed easily and spare my blushes. It feels more potent even in the mid-range.

I learn how hard you can drive a Cup 430 with confidence, how brave you can be, how fast it will hurtle up the straights, even how controllable it is when you play with Lotus’ adjustable traction control system. Oh, and how it never seems to tire. Even after lap after lap, the brakes remain strong, the tyres grip, the integrity remains. Track-day fans are going to love it.

Only if it performs as well out on the road will it be a proper Lotus, though. So it’s time to tool out onto the road; helmet off, things I hadn’t previously noticed start to show through. The terrific titanium exhaust note is a given – few V6 cars sound this magnificent – but the smoother, sweeter tone of the supercharger is new, and a nice treat.

Non-assisted steering is beyond reproach. In a world of electric power assistance, it lays claim to being the best-feeling steering setup you can buy. Lotus has adjusted the suspension so there’s less bump-steer: down a rumbly B-road, the wheel squirms just so in your hands, not too much, the car totally settled and arrow-straight while your hands are flooded with gorgeous-feeling feedback. Because it feels so naturally sorted, confidence flows as a result.

The ride, long a Lotus hallmark, is better than ever. The Cup 430 uses new three-way adjustable Nitron dampers; you can tweak rebound plus low and high speed compression, via addictively feel-good dials atop the dampers themselves that ‘click’ with watch-like positivity.

It means the ride can be tailored to be easier at lower speeds, but still controlled and taut at higher speeds. The Exige now has a lovely fluidity to it in everyday use, a charming free-flowing feel, which is able to take on Norfolk’s (and Britain’s) gritty B-roads with less of the stiffness or sharply-checked discomfort some rivals can exhibit. Sure, it’s firm, but brilliantly honed with it, and never ugly or harsh. No wonder Gales is so confident of its B-road speed; only a McLaren 570S seems so similarly well-suited to UK roads, and that has a plethora of adaptive trickery to help it, rather than the lightweight Lotus’ pure tuning talent. 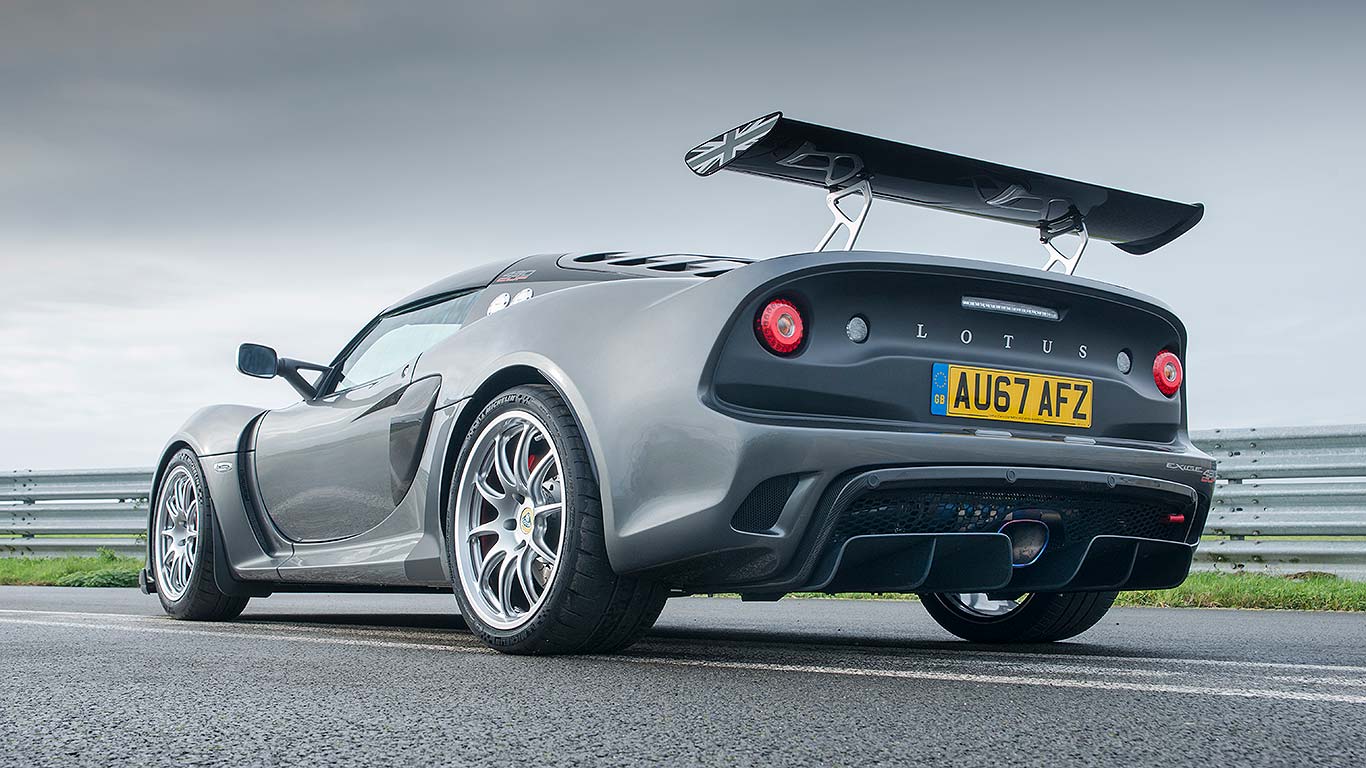 It’s wickedly fast, and the engine sounds divine, and it’s so settled and sorted that you can press on with your passenger wide-eyed more through thrills than panic. The integrity of build means it feels tight and together, it remains raw but more refined than ever, and the open-gate gearbox remains fantastic.

The Cup 430 is a Lotus faster than ever; as all Lotus are fast, and sorted for UK roads, this gives you an idea of how fast it is. But it’s the pleasure you get from driving it slowly that’s the real hallmark. There’s feedback at all speeds, so you always get satisfaction from a well-honed, premium, expert-feeling piece of engineering. It’s like the difference between an everyday watch and one with a five-figure price tag. You immediately know it’s special. 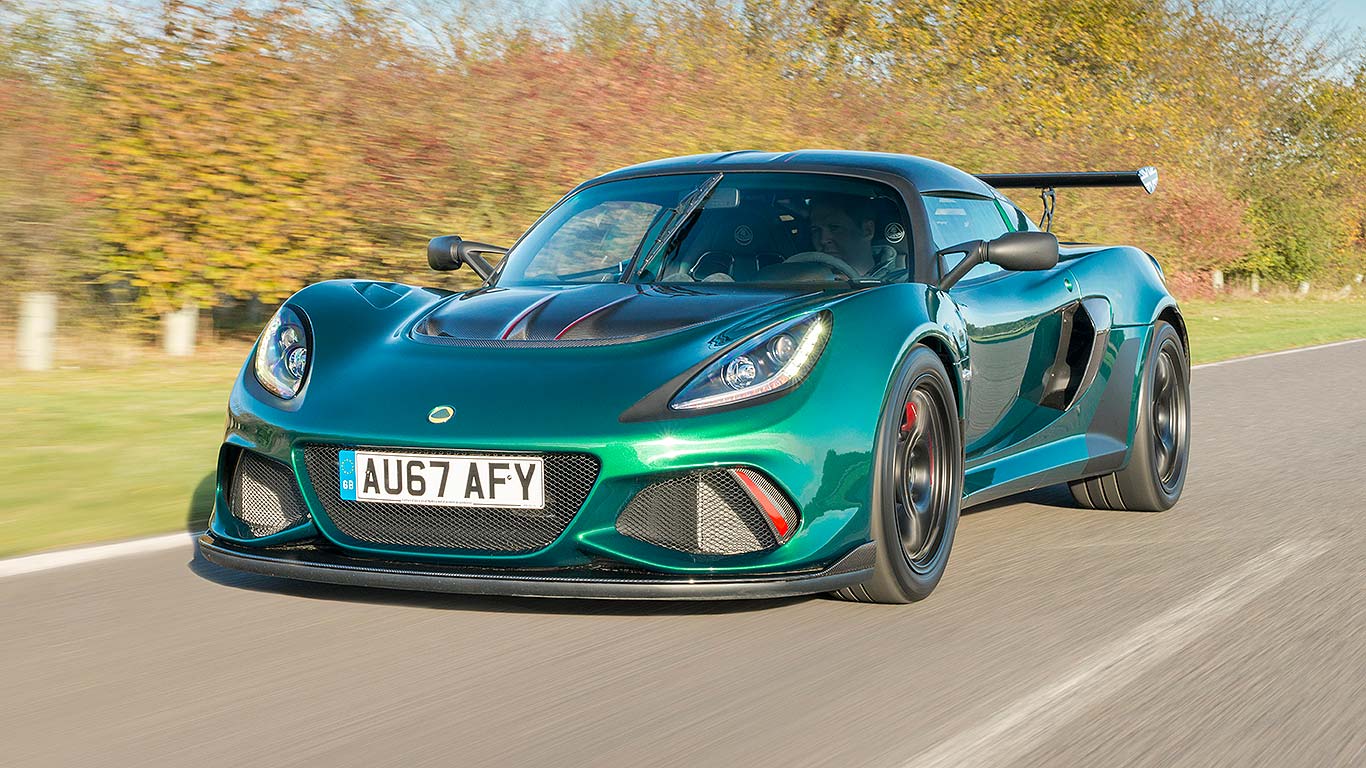 The Lotus Exige Cup 430 earns its billing as an ultimate Exige. It feels like a product that’s been poured over and sweated on by experts, tailoring it to make it absolutely as good as can be. You’ll need an all-new car to better it; now under Chinese giant Geely’s ownership, Lotus now has the investment and backing to give us one.

That’s in the future. The Cup 430 has made the new car’s job even harder. It will have to be going some to better this: no wonder Gales is so insistent this is the development finale for the Exige, because the engineering team’s full attention over the next couple of years needs to be focused on how to make its successor this special.

If you’re an enthusiast seeking the most gem-like and potent Lotus out there, one you can keep in your garage and pour over with total satisfaction, look no further. It’s seriously expensive, yes, but those in the know who experience it shouldn’t take too long in justifying it. And then telling others just why it’s such a six-figure bargain.