Porsche makes the world's finest everyday supercar even better for 2016 – but has some of the magic been lost? 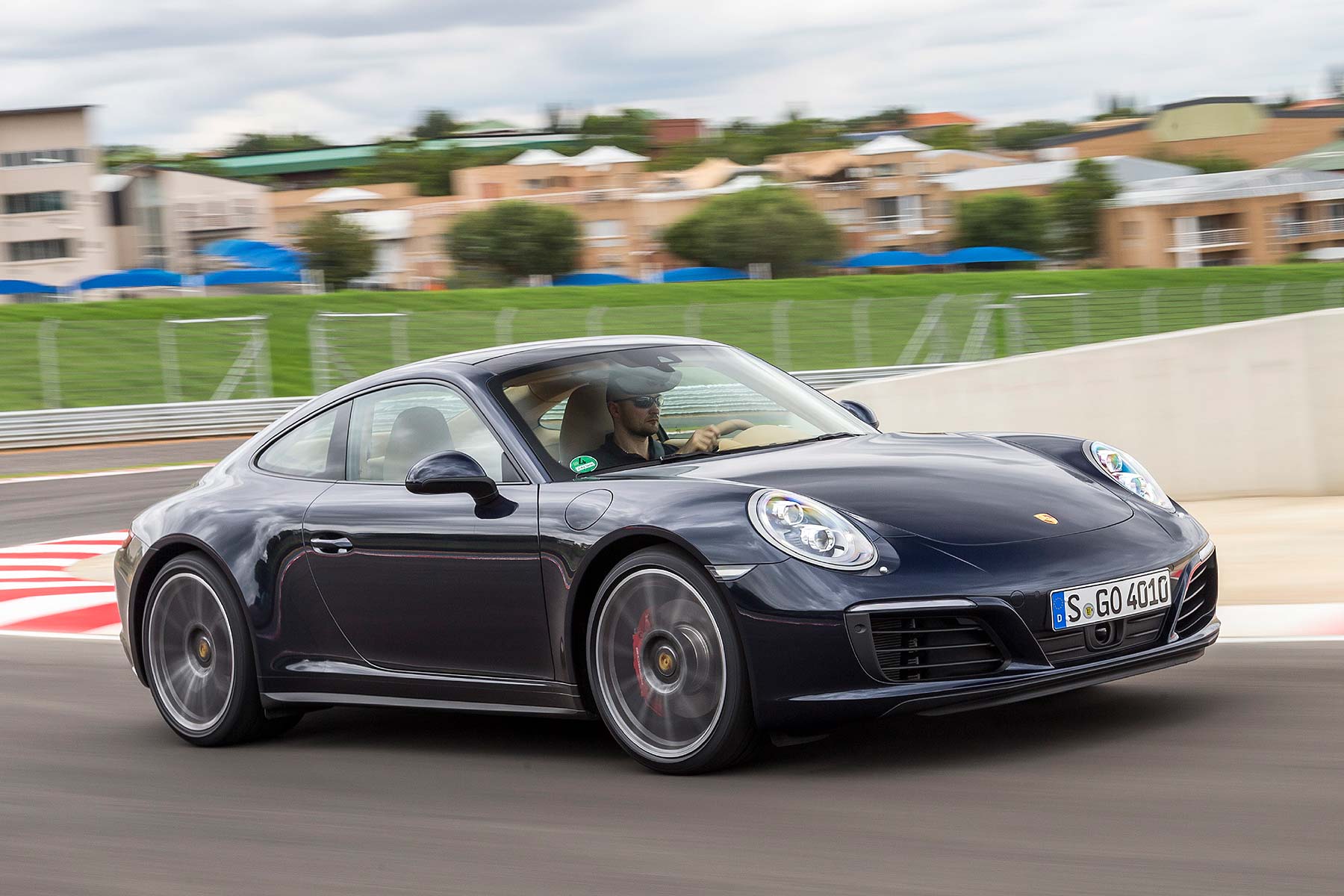 Such is progress. The old 3.4-litre and 3.8-litre non-turbo engines simply aren’t efficient enough these days, which is why every 911 apart from the GT3 is now turbocharged. As the Carrera 4 is already the ‘saner’ option to the rear-drive Carrera, what is there to get excited about here?

The fact Porsche’s claiming to have put all that extra pulling power to good sporting effect, that’s what. The faster engine – capable of 0-62mph in 4.1 seconds in C4 guise, or 3.8 seconds as the C4S – makes the AWD 911s faster than their RWD equivalents for the first time, but performance isn’t the big story here. The chassis is.

All AWD 911s now get PASM adaptive damping as standard, now 10mm lower. Drop it a further 10mm with the C4S’ optional sport chassis; the S also offers optional rear axle steering, like on the GT3. You can even get a front axle lift system that pumps the nose up 40mm to stop it grinding on steep car parks.

Significantly, all Carrera 4 now get the electro-hydraulic PTM system from the 911 Turbo. It’s a cleverer, faster-acting system “that can place the torque exactly where we want it, immediately”.

For the 1 in 3 911 buyers who choose AWD, most take the PDK twin-clutch auto. This now has a vibration-reducing flywheel, ‘virtual’ gears that slip the clutches to cut revs (it’s wear-free, says Porsche) and, joy, racing-style manual shift logic: pull back for upshifts, punch it forward for downshifts.

Speaking of feeling racy, a new PSM Sport stability control setting is available, letting you drift and slide with a safety net. You get this with the optional Sport Chrono’s new steering wheel Mode Switch; the standard 375mm 918-Spyder steering wheel can be optionally swapped to an even smaller 360mm GT sport rim. 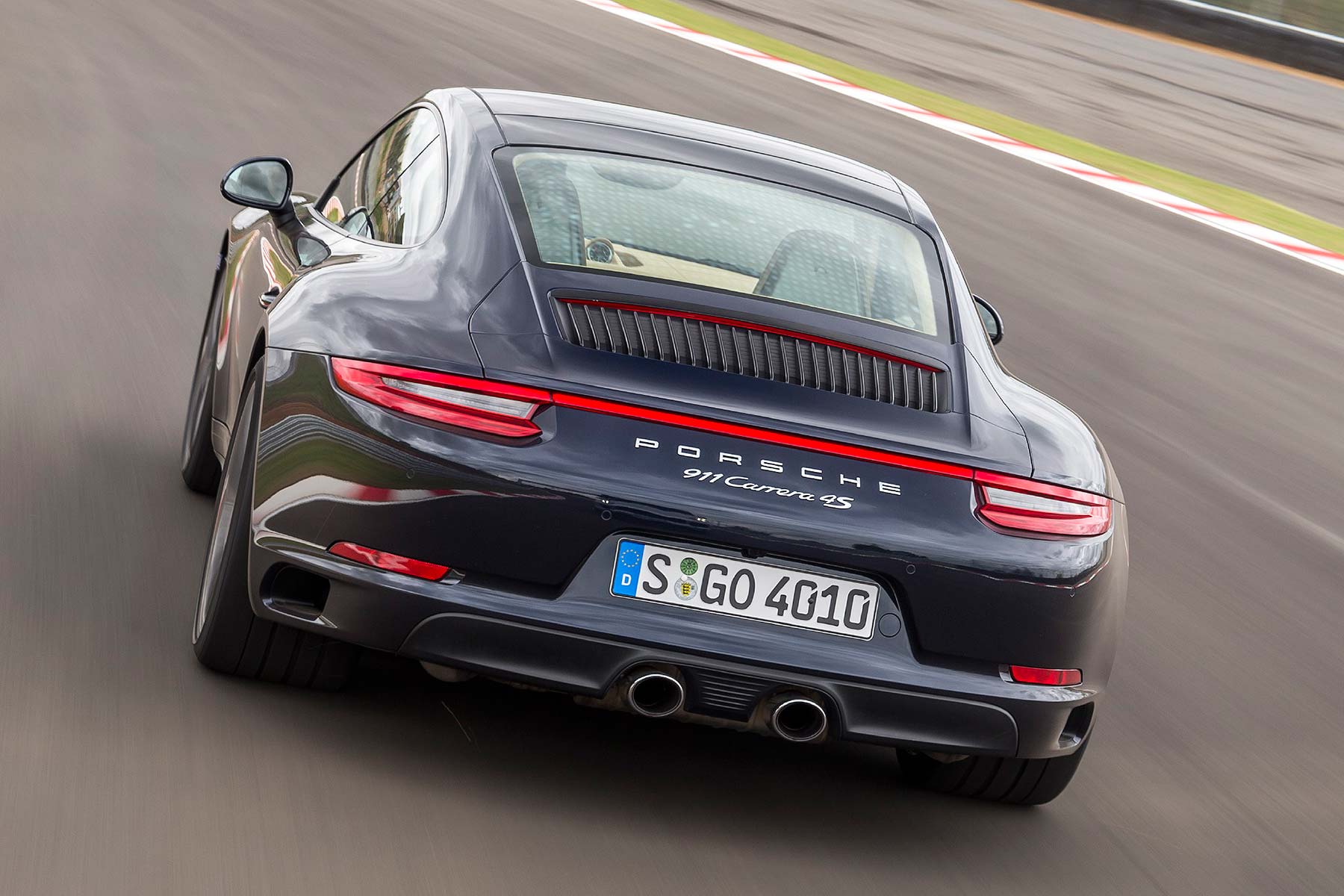 Big changes beneath, but typically Porsche understatement on top for the 991-II Carrera 4 range. Even so, the new headlight’s four-point running lights, 3D rear lights, fancier connecting light bar and louvre-packed new rear lid stand out, as do the new AWD-specific Carmine red and Miami blue colours. Inside, all-new PCM infotainment is a huge improvement too.

So this is more than just a new engine. Porsche seems to have made the AWD 911s, long perceived as the ‘softer’ choice, promisingly sporty for the first time. Appetites whetted, we hit the track in South Africa to find out exactly what the £5k premium over a RWD 911 buys. 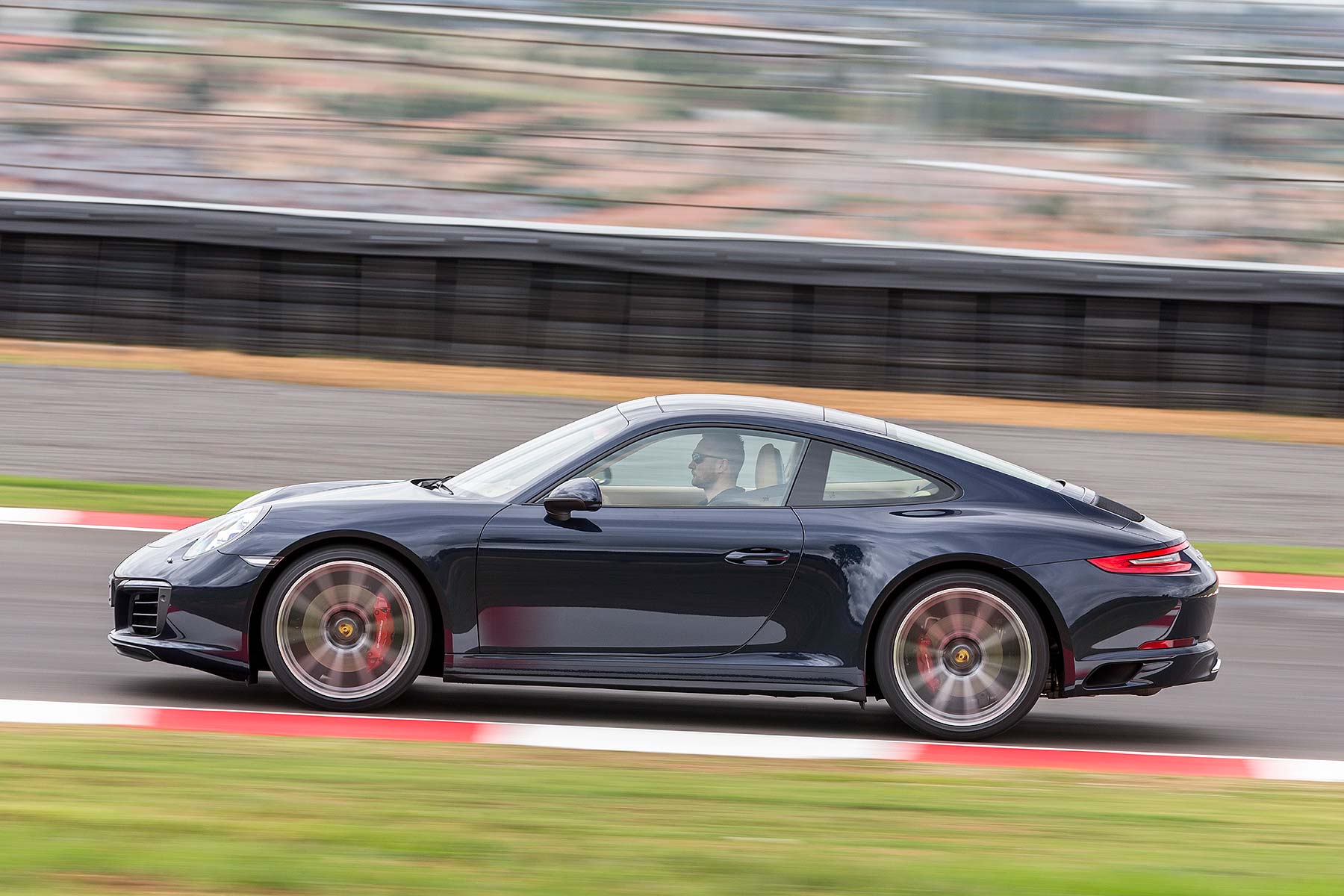 Porsche hasn’t just standardised the previously-C4S-only PASM suspension on the Carrera 4 range, it has honed it too, with tweaks to the dampers and control systems themselves: all small, constant-evolution stuff that nevertheless makes it better than before.

The once-controversial electric power steering is now barely an issue, for example. It’s linear, satisfying and precise. Road noise seems less prominent than before. Suspension compliance and control are even more uncannily good, both absorbent yet taut.

Yes, you can feel a delay when you press the throttle before the surge floods in – but this in part is because that surge is so much greater than before. The old Carrera 4S 3.8 had less pulling power than this, at a peaky 5,600rpm. The new 4S has more torque, spread flat from 1,700-5,000rpm.

In other words, it delivers more drive as much as 3,900rpm sooner than the old car. This extraordinary statistic is why the new car feels so much more vibrant in daily use. Even if you’re really lazy, it’s still a quick car: turn the Mode Switch to S or S+ and it’s appreciably more reactive yet without demanding ultra-high revs.

You can almost completely eliminate turbo lag by jabbing the Sport Response button. This energises the car into something not far shy of a 911 Turbo for 20 seconds at a time and is a gimmick far more satisfying to use than you’d first think.

And, flat out, it’s as fast as you’d ever wish. As fast as a 911 Turbo from a generation or two ago. With focus in corners that’s fully supercar and not at all unfocused. Carrera 4 the soft touch of the 911 range? No more.

Indeed, the extra confidence and alertness with which it corners may well take you by surprise. By adopting the Turbo’s PTM system, Porsche’s able to make more precise use of all-wheel drive: understeer is quelled at last, the default attitude is rear-led and it will even allow (controlled) oversteer if you wish.

It will be interesting to find out just how significant the sportified new Carrera 4 AWD system proves on UK roads: here in South Africa, it was an unexpectedly pleasing discovery. 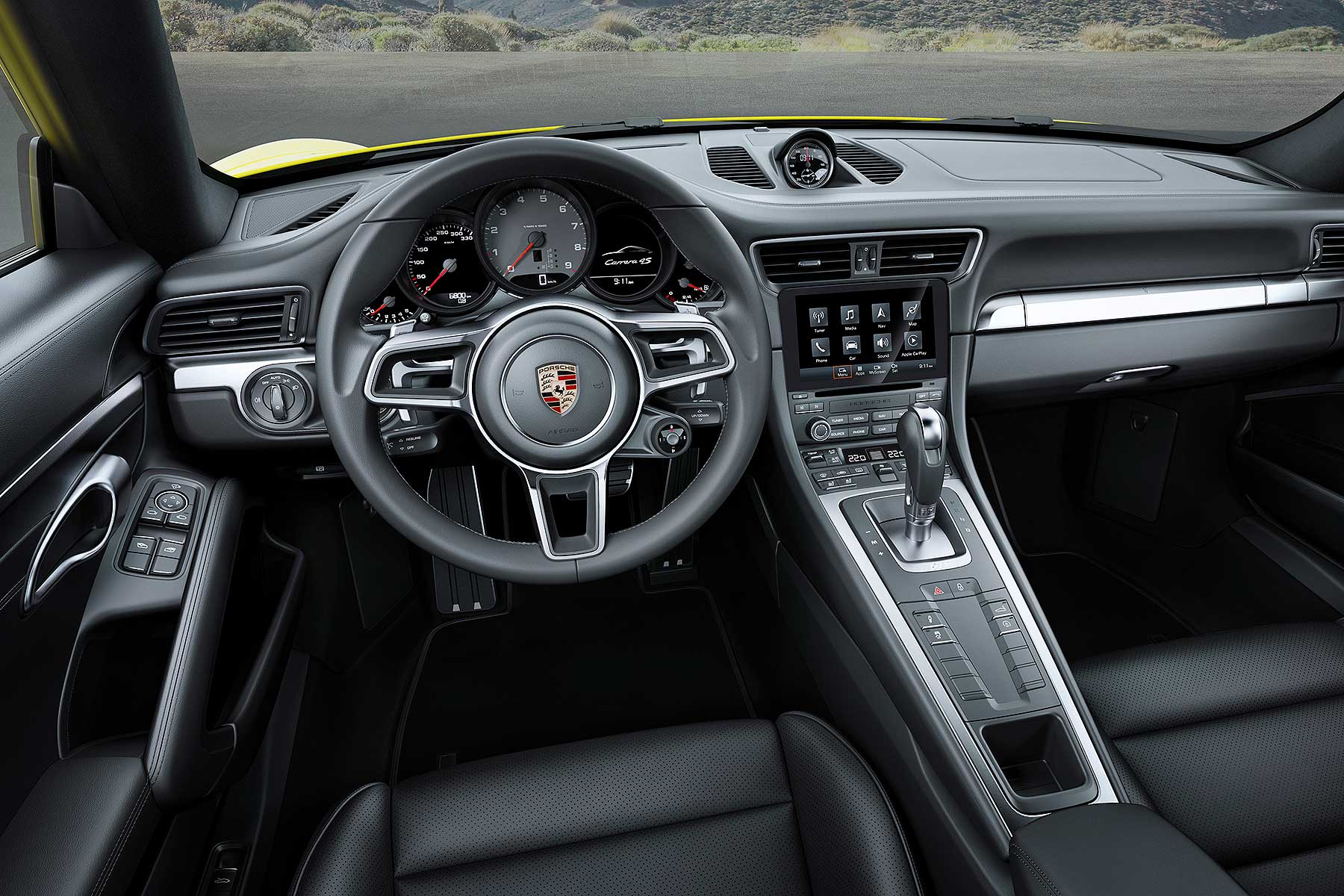 The interior of the 911-II isn’t that much different to the previous generation car, save for one significant upgrade: the PCM4 touchscreen infotainment system. Jam-packed with surprise and delight features, it’s like switching from an old Nokia to the latest smartphone.

Apple CarPlay works beautifully, the new sat nav system is crisp and responsive, scrolling through album tracks is a pleasure.

It’s easy to use as Porsche has retained the hard keys of the old car: an engineer told us when you’re driving fast, the last thing you want to be doing is squinting at an infotainment screen to find the nav display. Of course, 911s are always driven fast.

Clear dials are many in number, and to further satisfy those for whom more clocks is better, the multi-function screen next to the speedo now has even more monitoring options – chiefly, of course, turbo boost.

Ironically then, the biggest gripe is the fiddly climate control buttons further down, along with multitude of auxiliary switches on the centre console. We counted 30 in all, plus a couple of push-pull toggles. It’s a few too many, Porsche.

Other familiar 911 attributes include the handier-than-you-think rear seats, enveloping front seats, tight door pockets and the fact there’s still nowhere to store your smartphone (the latter despite PCM4 connecting so well with it…).

Economy’s up by over 4mpg on paper, and Porsche reckons it could be better still in practice. Engine stop-start is smarter, for example: it will turn off the engine as you coast to a halt rather than waiting for a complete stop. Every little helps.

The virtual gears you get in PDK are clever too. Lift off when cruising and the revs still drop to idle, as before, in coasting mode. But whereas previously they jumped back to where they were when you went back on the accelerator, they can now sit at a lower, ‘intermediate’ rev point thanks to the virtual gears. Press the pedal more and normality is restored. Fuel-saving tech gets cleverer and cleverer.

It should be cheaper to run and the lower emissions will further help the 911’s already glowing retained values. PCM4 infotainment is future-proofed too, meaning you won’t have to waste time (and money) trying to link your car with 2017’s newest smartphone.

The 2016 Porsche 911 Carrera 4S has a new engine, new interior tech, new all-wheel drive system… and just the mildest visual tweaks of lights, rear lids and doorhandles to show for it.

Don’t be fooled by appearances. It’s a car with a different character and, arguably for its key buyers, more well-rounded appeal. People buy 911s to be brilliant everyday supercars. This is probably the best £90k daily driver supercar there is.

The engine, despite our worries, still delivers 911 character and sounds more charismatic than we expected. The step-up in drive and pulling power is welcome too, making it a faster car in the majority of situations.

Over long distances, it’s a precise and very satisfying car to spend time with; on the racetrack, the extra bite and precision of the four-wheel drive sorts out the understeer that used to blight the Carrera 4 and makes it a viable, fun alternative to a rear-drive Carrera for those not so fussed by on-the-limit dramatics.

Does it feel quite as special as the non-turbo car? No. Is it a better car overall? Unquestionably. Buyers are going to be impressed, even if they don’t yet realise it yet from looking at the configurator…