Rolls-Royce pulls the wraps off its majestic new flagship: the eighth-generation Phantom 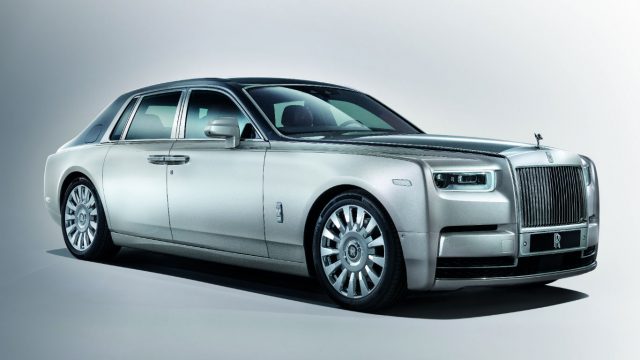 Potential plutocrat? Budding billionaire? We’ve found the car for you. The 2018 Rolls-Royce Phantom promises to be the most comfortable, opulent and downright indulgent way to waft from board meeting to private jet. So what’s new?

‘Phantom’ is the longest-running model name in motoring. The first Phantom was launched in 1925 as the successor to the Silver Ghost. This is the eighth-generation car (“motor car” in R-R speak) and its design draws heavily on the 2003 Phantom VII – the first Rolls developed under BMW.

See the new Phantom in the metal though, as we did at the world debut in London, and it looks leaner and more muscular. It’s even – dare we say it? – subtly sporty. Rolls’ traditional ‘Pantheon’ grille is integrated into the bodywork for the first time, framed by more curvaceous headlights with frosted glass internals.

The Phantom is still huge, of course (even 22-inch alloys look slightly lost in those wheelarches), but its side-profile is more dynamic, with a sweeping roofline and tapering tail. Bountiful quantities of hand-polished stainless steel adorn the grille, door handles and window-surrounds, making the car sparkle under studio lights. 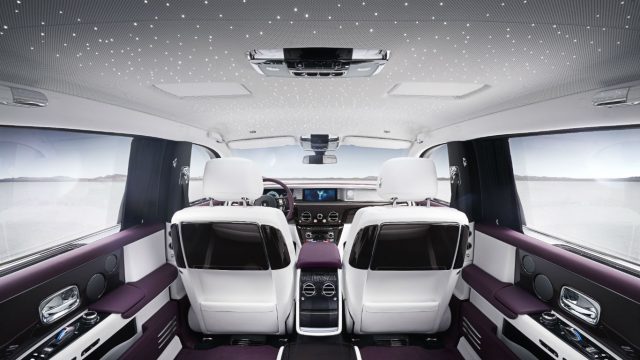 Underpinning the new Phantom is a new aluminium spaceframe. This, the company says, will be “scalable to the size and weight requirements of different future Rolls-Royce models, including those with different propulsion, traction and control systems.” Reading between the lines, that includes the forthcoming four-wheel-drive Cullinan SUV. It’s also 30 percent stiffer than the outgoing Phantom’s chassis.

The engine is new, too: a 6.75-litre twin-turbo V12 that develops 571 horsepower and a mighty 664 lb ft of torque at 1,700 rpm. With an eight-speed automatic gearbox linked to the sat nav for anticipatory shifts, Rolls promises “near-silence” in the cabin and the “calm low-speed progress associated with state occasions.” All you need are a set of flags for the front wings.

No performance figures have been quoted yet, but expect a marked improvement on the old car (sorry, “motor car”), which managed 0-62 mph in 5.9 seconds and a top speed of 149 mph. Adequate, then. 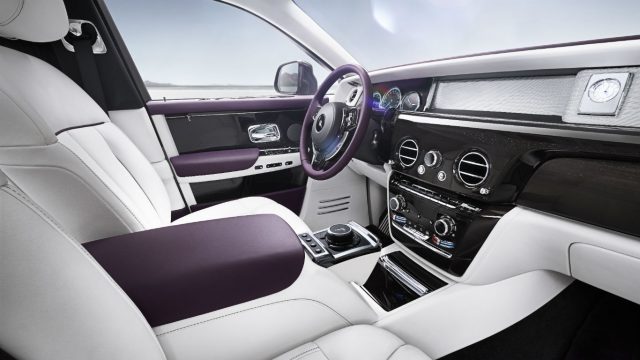 Open the Phantom’s huge, heavy doors – rear-hinged at the rear, as before – and you’re greeted with the pièce de résistance. “The Gallery” runs the full-width of the dashboard and is a glass-fronted, hermetically-sealed space where owners can “curate” their own bespoke artworks.

Two examples were displayed at the Phantom reveal. “Immortal Beauty” by Nymphenburg is an intricate display of porcelain flowers, while “Digital Soul” by Thorsten Franck is the map of an owner’s DNA recreated in 24-carat gold. We’d question the impact the latter would have on resale value, though…

Naturally, most Phantom owners will be sat in the back, where they can enjoy the largest version yet of R-R’s twinkling Starlight Headliner, heated side and centre armrests, plus a drinks cabinet stocked with whisky glasses and champagne flutes.

If you have to ask…

Deliveries of the new Rolls-Royce Phantom start in 2018, so get saving now.

Predictably, there’s no word yet on prices, but around £350,000 ($460,000 in the United States) seems likely. Beyond that, with the number of bespoke options available, the only the limit is your bank balance. Time to dream big.

Bradley Lawrence
I joined MR in summer 2017 to create stunning video and photographic content. I have a love for anything noisy that draws plenty of attention, in particular my best mate’s Audi TT RS (a car the rest of the team never stop hearing about). I currently drive a 2017 Vauxhall Corsa, but plan to upgrade to an Abarth 124 Spider when I turn 21.

Thanks to Enterprise Rent-A-Car's Exotic Car Collection, you can 'live out your childhood fantasies' by hiring a supercar for a couple of days or more.
Read more

New research has revealed that near-on one in four potential new car buyers are waiting for the 69-plate period to elapse before they take the plunge.
Read more