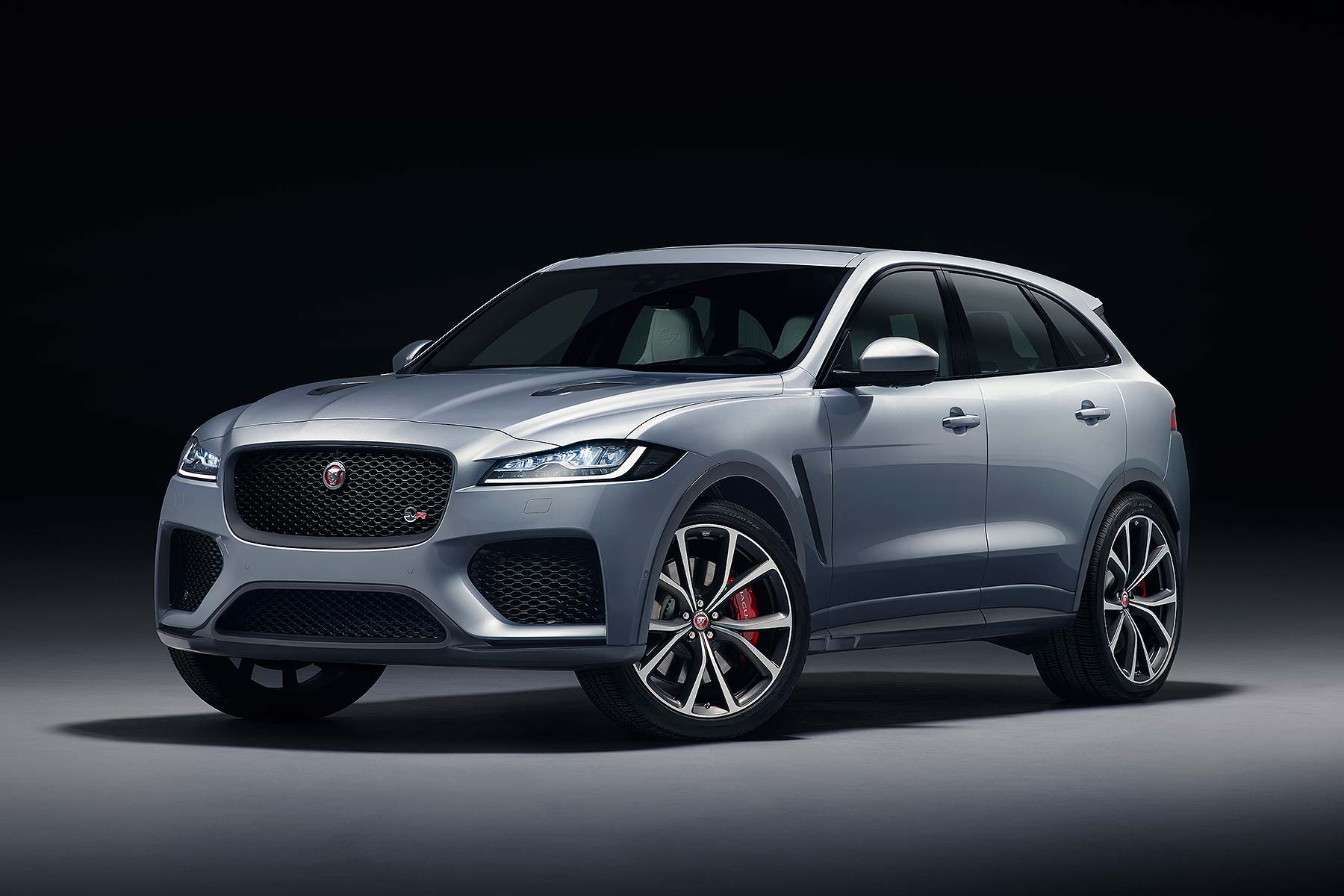 They’ve finally done it. Jaguar’s petrolhead engineers have dropped the firm’s 5.0-litre supercharged V8 into the F-Pace SUV. In doing so, they’ve created an ultra-potent, ultra-desirable homegrown answer to a Mercedes-AMG GLC. At last.

The F-Pace SVR debuts at the New York International Auto Show. All 550hp of it, which is enough to take the mid-size premium SUV from 0-62mph in 4.3 seconds, and onto a 176mph top speed. There’s also 501lb ft of pulling power: in all, a 44 percent hike in output compared to the four-cylinder and V6 F-Pace models we’ve had up to now. 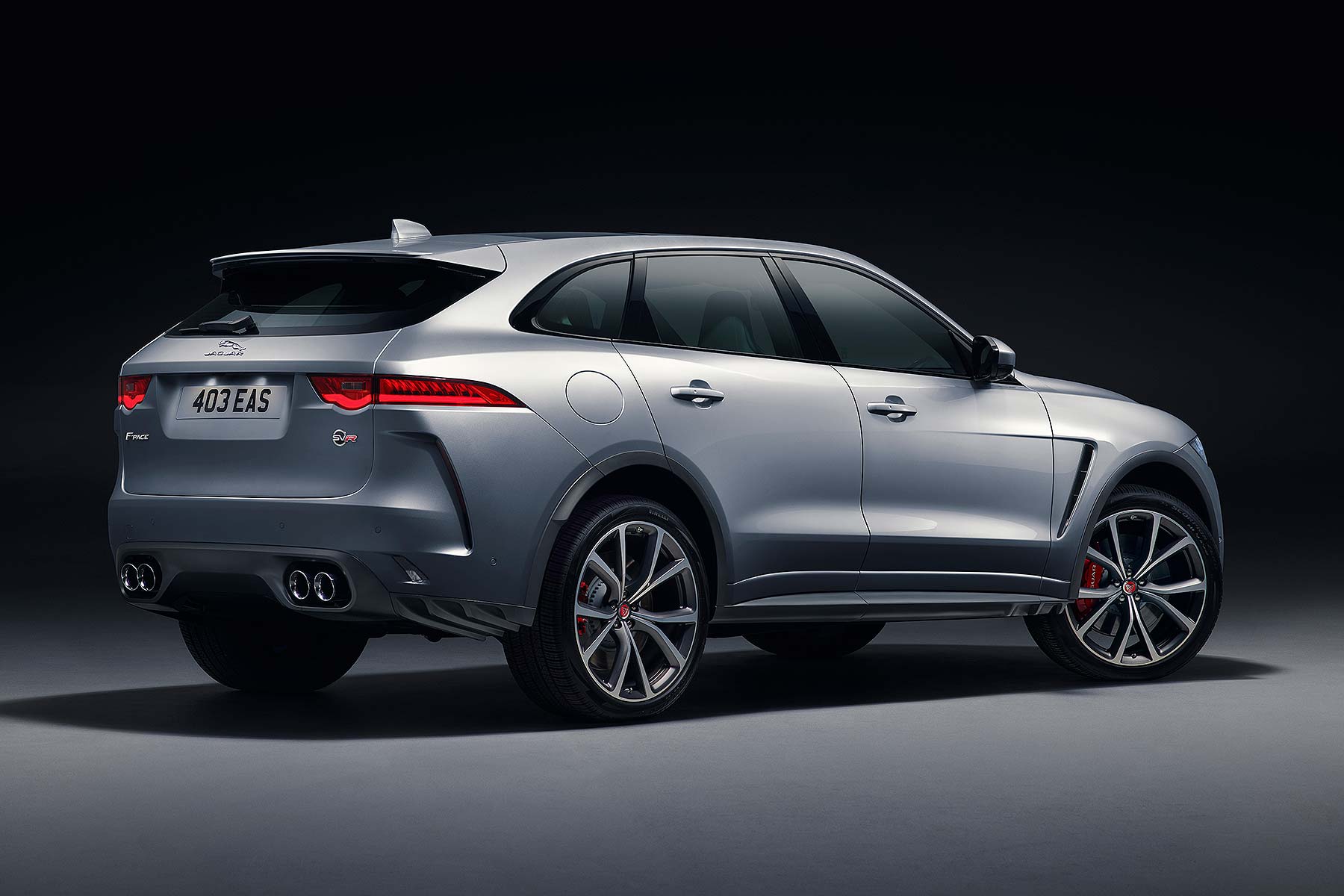 Because it’s the work of JLR’s hot Special Vehicle Operations (SVO) division, there’s a suitably standout visual makeover to go with all this power. An all-new front bumper has been scalloped out to feed in air, and there are vents in the sides of the wings to further aid cooling and reduce lift. 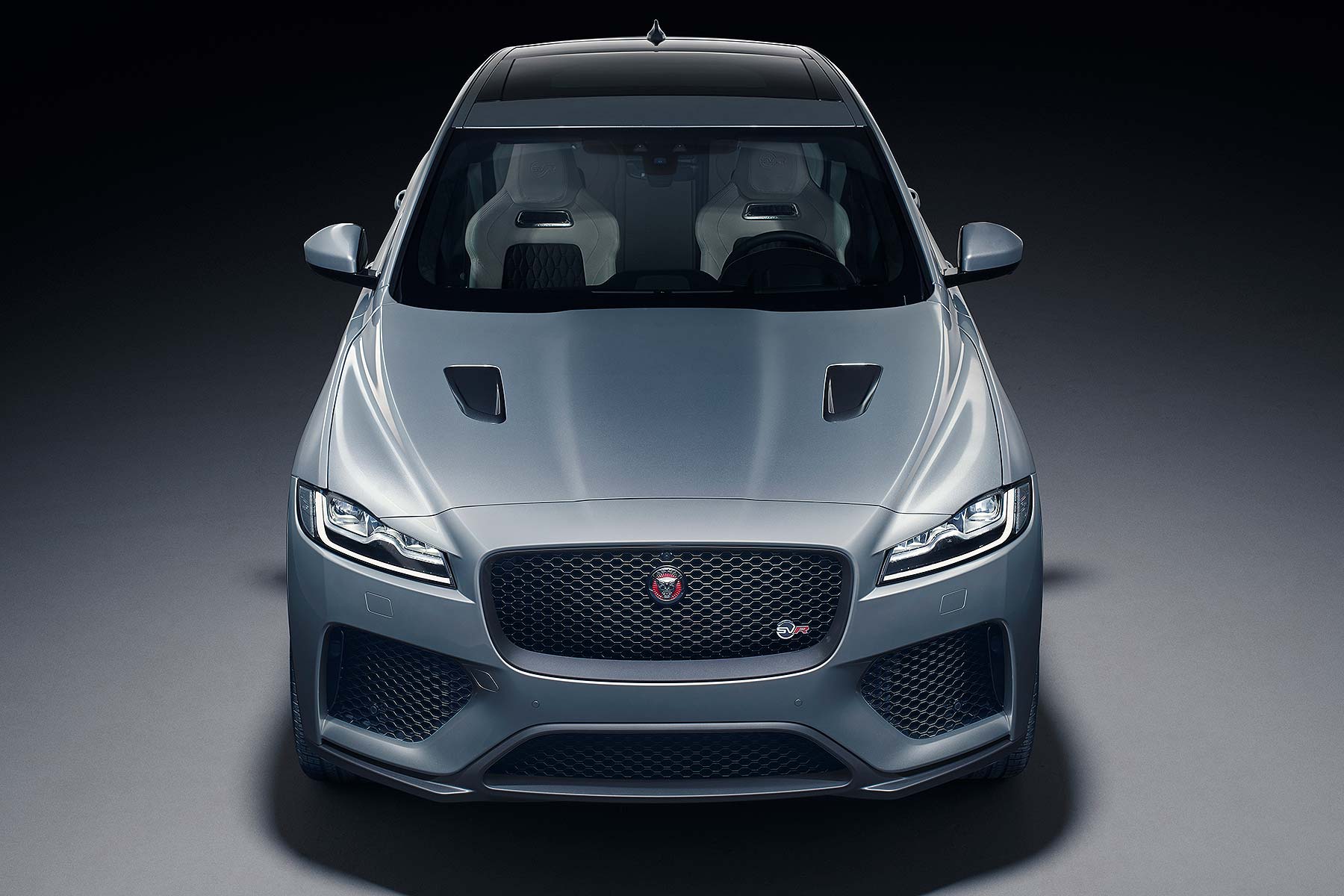 Another front-end feature are the new SVR bonnet vents, which look mean (they’ll be your instant F-Pace SVR differentiator) but are also functional, helping air heated by the V8 to escape.

New wheelarch extensions wrap around either 21-inch or 22-inch alloys, and there are meatier lower body mouldings and, of course, a whopping great four-pipe exhaust at the rear, complete with the Jaguar Variable Valve Active Exhaust System. Interestingly, this higher-performance system weighs 6.6kg less than the standard setup. Note the enlarged rear spoiler as well. 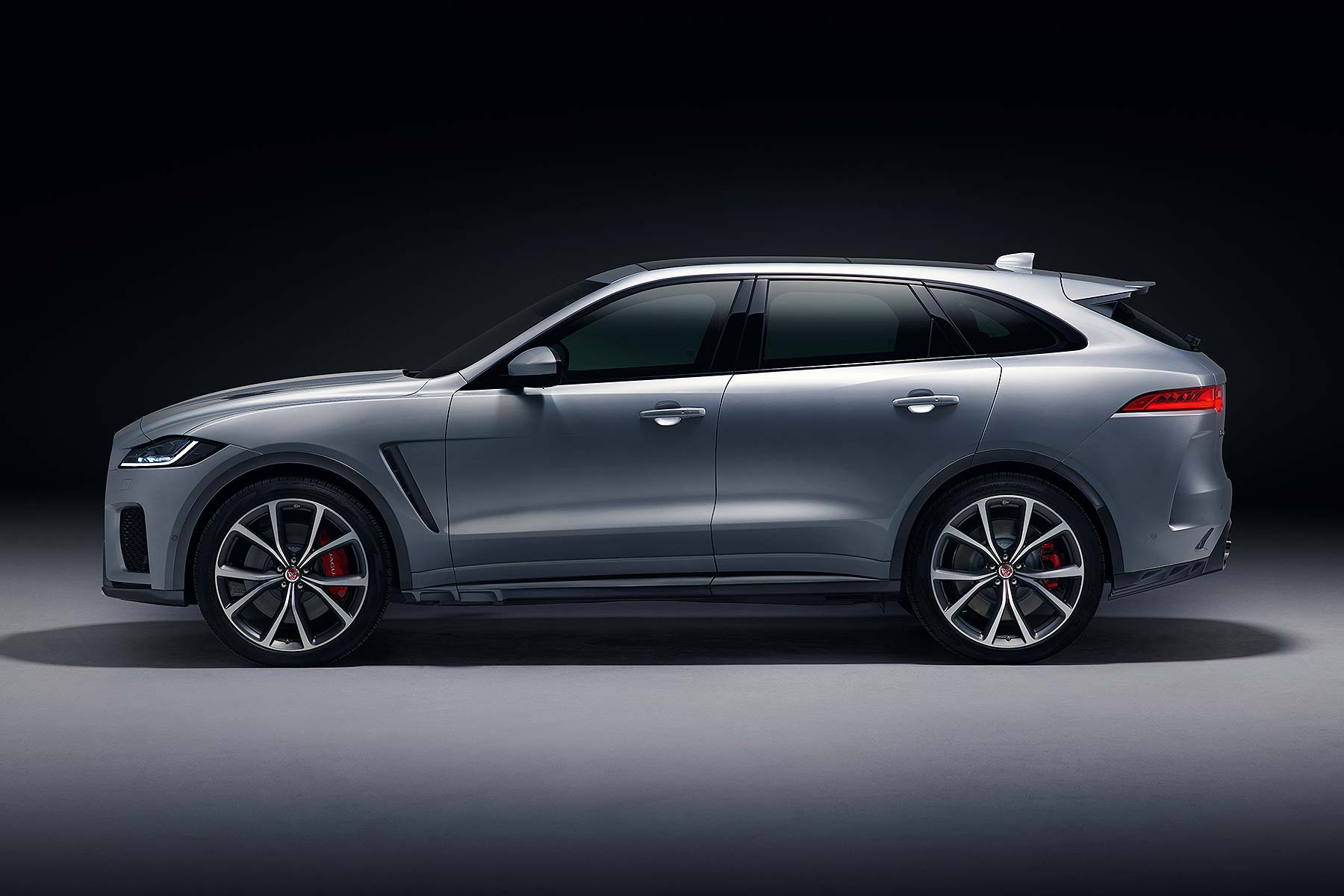 It’s not all for show, either. “The F-Pace SVR delivers the handling and agility to match its performance,” says JLR handling guru Mike Cross. Spring rates are up, by a hefty 30 percent at the front, and a new anti-roll bar cuts body lean by five percent in corners.

The lightweight forged alloys wear tyres 25mm wider at the rear than the front, and the 22-inch rims are up to 2.4kg lighter than normal. Hiding behind them is a performance brake system with two-piece discs that are 395mm in diameter on the front, 396mm at the rear.

Jaguar has fitted its rear electronic active differential to the F-Pace for the first time. This has been honed for the SVR – indeed, said Cross, “everything from the steering to the bespoke suspension set-up has been tuned specifically for our performance SUV”. 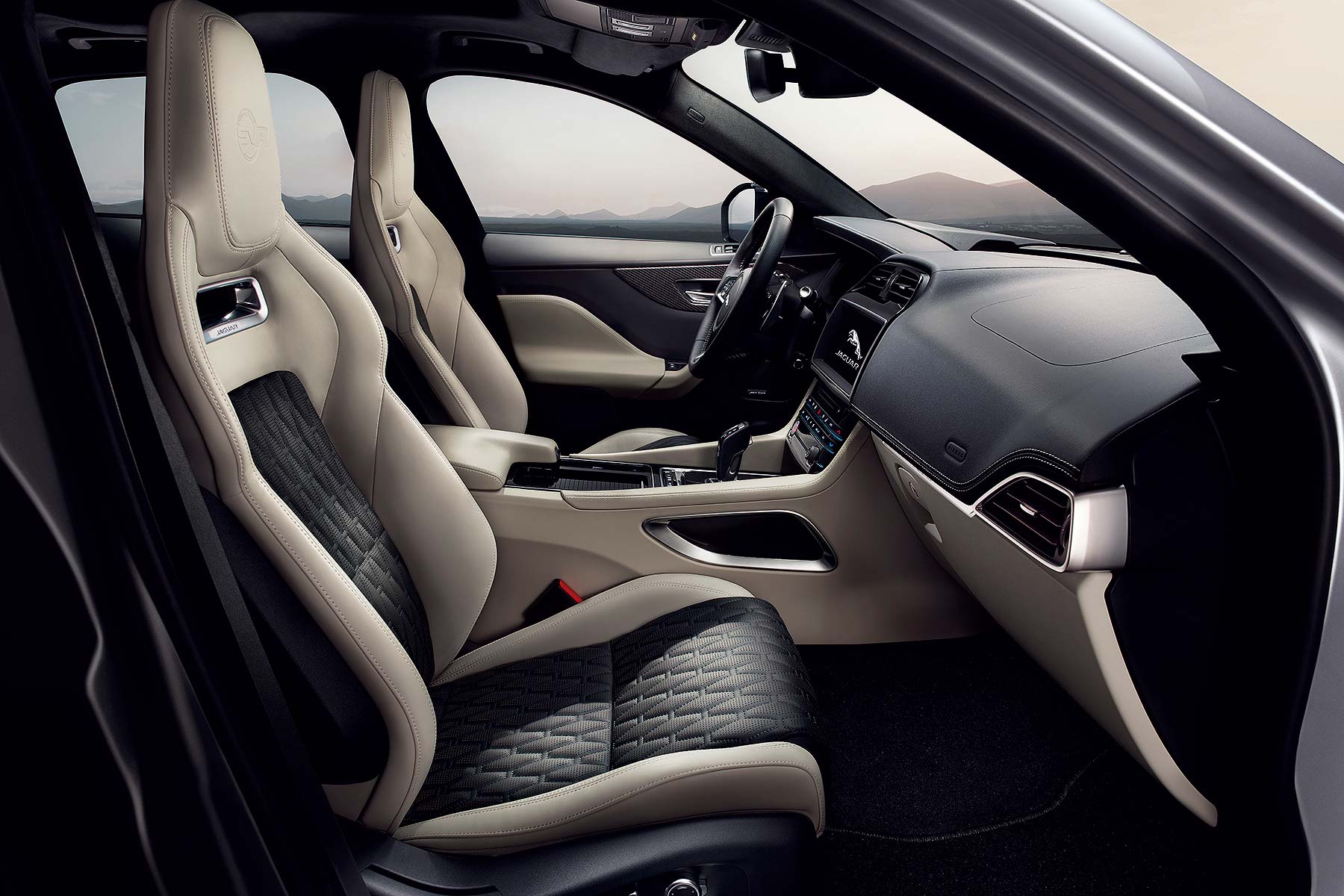 Inside, there are slimline front sports seats that look like they’ve been taken straight from the F-Type. Who knows, maybe they have – and they’re matched by two more in the rear. They’re SVR-branded, as is the steering wheel, and the paddle shifters are cool aluminium metal. There’s a choice of four interior colour schemes as well.

Prices start from £74,835 in the UK and ordering will open in May. Want to be the first in line? In the usual Jaguar way, head to the firm’s website and register your interest. Bosses tell us this really is worth doing – the people at the front of the queue generally do this as early as possible…