Some car companies tuck their classics away in soulless storage facilities. Not BMW. When Munich launches a new car, the ancestors are usually there too, offering a sense of context and – more often than not – tempting dewy-eyed journos away from the modern metal. The recent launch of the F90 M5, which featured every […] 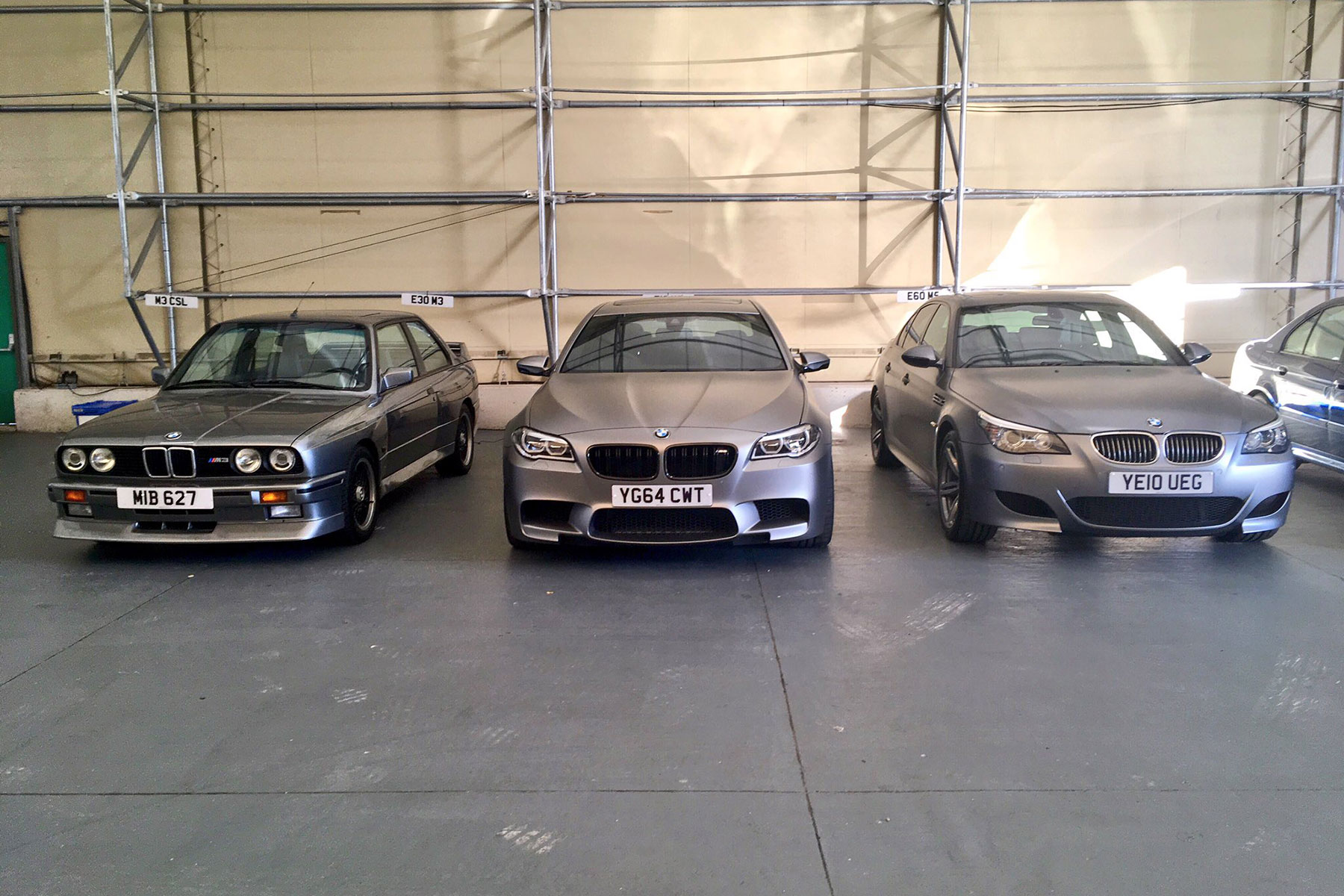 Some car companies tuck their classics away in soulless storage facilities. Not BMW. When Munich launches a new car, the ancestors are usually there too, offering a sense of context and – more often than not – tempting dewy-eyed journos away from the modern metal. The recent launch of the F90 M5, which featured every hot 5er from the original E28 onwards, is a case in point.

Video: on location with the BMW classic fleet

BMW UK’s heritage fleet focuses on the sportier end of the spectrum: M cars, Z cars and JCW Minis, plus a handful of blue-chip exotics. Join me for an exclusive tour.

Beauty and the boost 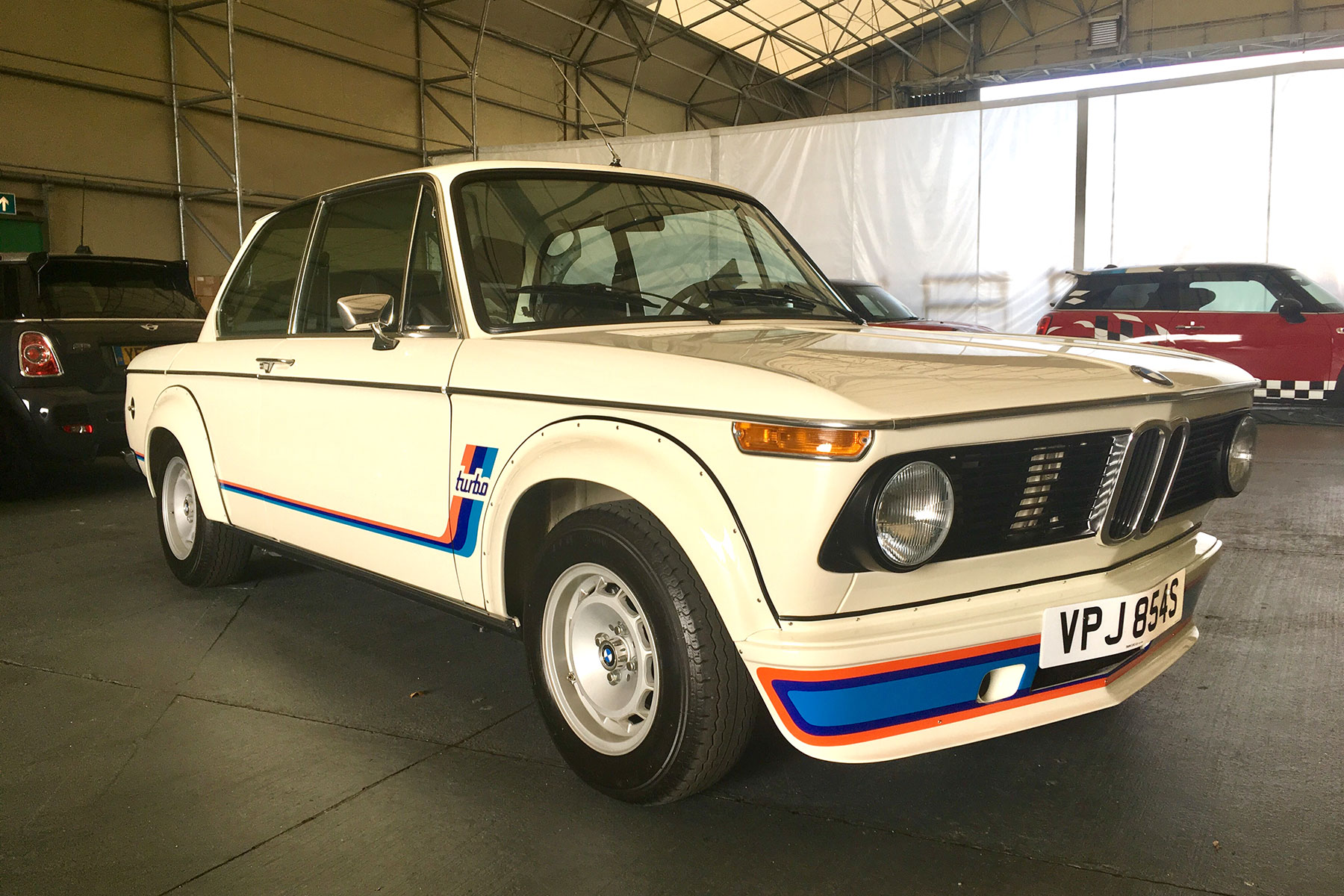 Favourite car in the collection? I’m tempted to say the M1, but that was out on promotional duties at the time of my visit – so I’ll go for the 2002 Turbo. Built between 1973 and 1975, this 170hp upstart was one of the earliest turbocharged road cars. A short wheelbase and an unsubtle wallop of boost at 4,000rpm make for lively handling. Think ‘junior Porsche 930 Turbo’.

Those in the know say the non-turbo 130hp Tii is a sweeter drive, but I don’t care. All-or-nothing lag is part of the Turbo’s appeal. And besides, just look at it. From that elegant shark-nose to the bolted-on arches and BMW M stripes, the boosted 2002 is the epitome of retro-cool. All it needs is the ‘get outta my way’ reverse TURBO lettering on the front spoiler: a controversial factory option when new.

Martin Harrison, curator of the BMW fleet, clearly has a soft-spot for the Bangle-designed E60. “It’s a serious bit of kit,” he says, “that V10 is just epic at high revs”. Even he’ll admit the jerky SMG III automated manual gearbox isn’t BMW’s best, though. That leaves the just-replaced F10, which sounds rorty from its carbon-coated tailpipes, but looks slightly anonymous by comparison. This car is the ‘30 Jahre’ special edition, one of 300 in matt silver to celebrate three decades of the M5. 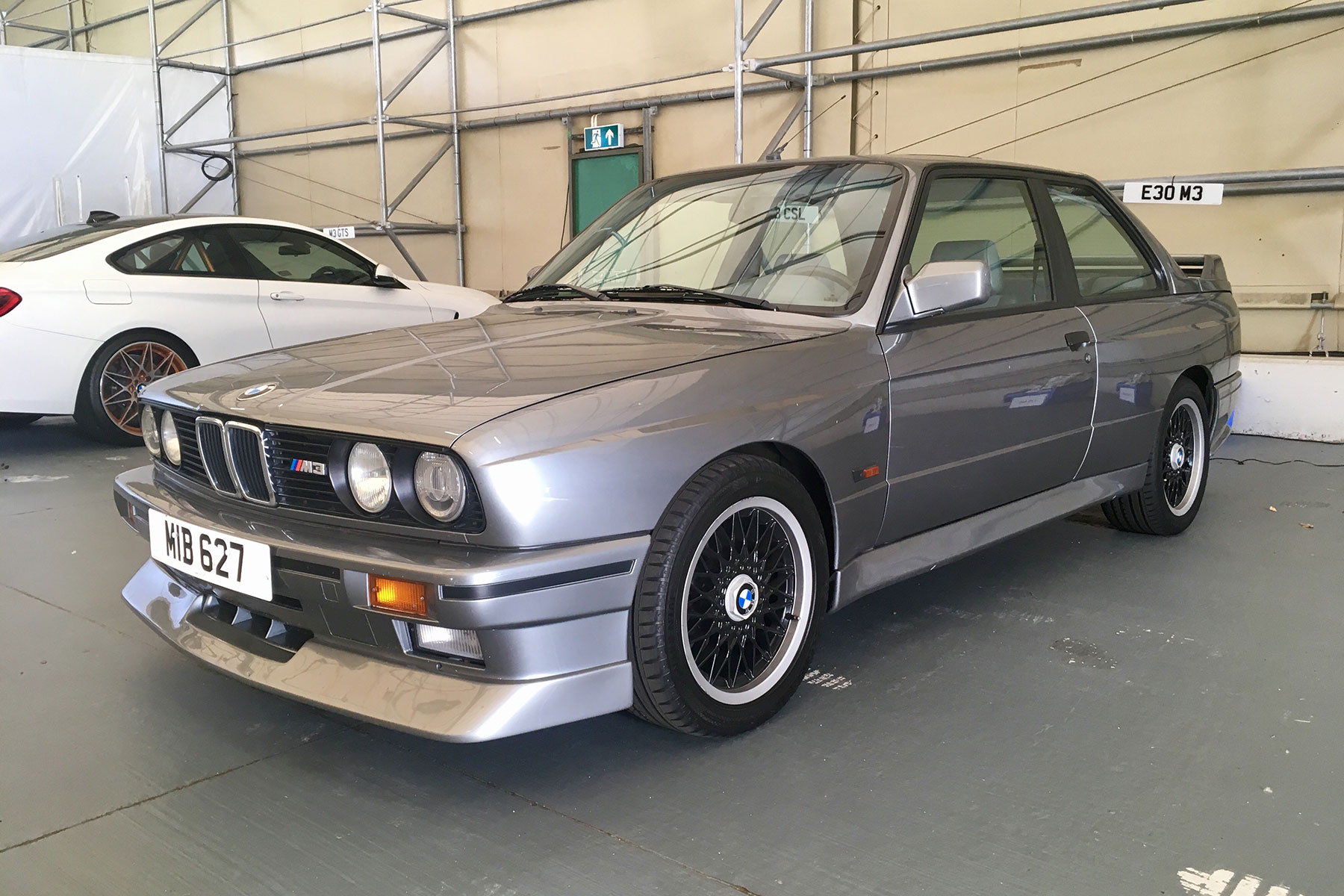 Like many of the cars I used to own (Mk1 VW Golf GTI, Peugeot 205 GTI), the E30 M3 has appreciated beyond all expectations. Even leggy examples are £50k, while a Sport Evolution can be north of £100k. That’s a shame because a) I missed out on a big pot of money and b) many of these investment-grade E30s won’t be driven. And the original M3 is, above all, a driver’s car.

This E30 is one of 505 Roberto Ravaglia editions, named after the driver who won both European and World Touring Car Chanmpionship titles for BMW, and packing a 215hp version of the 2.3-litre S14 engine. A 0-62mph time of 6.7 seconds is tame by today’s standards, but a perfectly balanced chassis provides ample compensation. With a few exceptions (notably the E46 and CSL) subsequent M3s have struggled to recapture the E30’s magic.

BMW’s association with Bond films started inauspiciously with the Z3 in GoldenEye, then improved a little with a 750iL in Tomorrow Never Dies. Only by the time of The World is not Enough did 007 finally have wheels worthy of his status: the Z8. This retro-styled 400hp V8 sports car, built from 1999 to 2003, wasn’t especially popular when new. However, it has since become a sought-after modern classic.

The other roadster in BMW’s collection is humbler, but – to my eyes – more appealing. The plastic-bodied Z1 borrows its 2.5-litre straight-six from the E30 325i, and reaches 62mph in 7.9 seconds. By far its most distinctive feature, though, are its drop-down doors. These disappear into the sills at the touch of a button, allowing you to drive roof-down with the side of the car fully open. 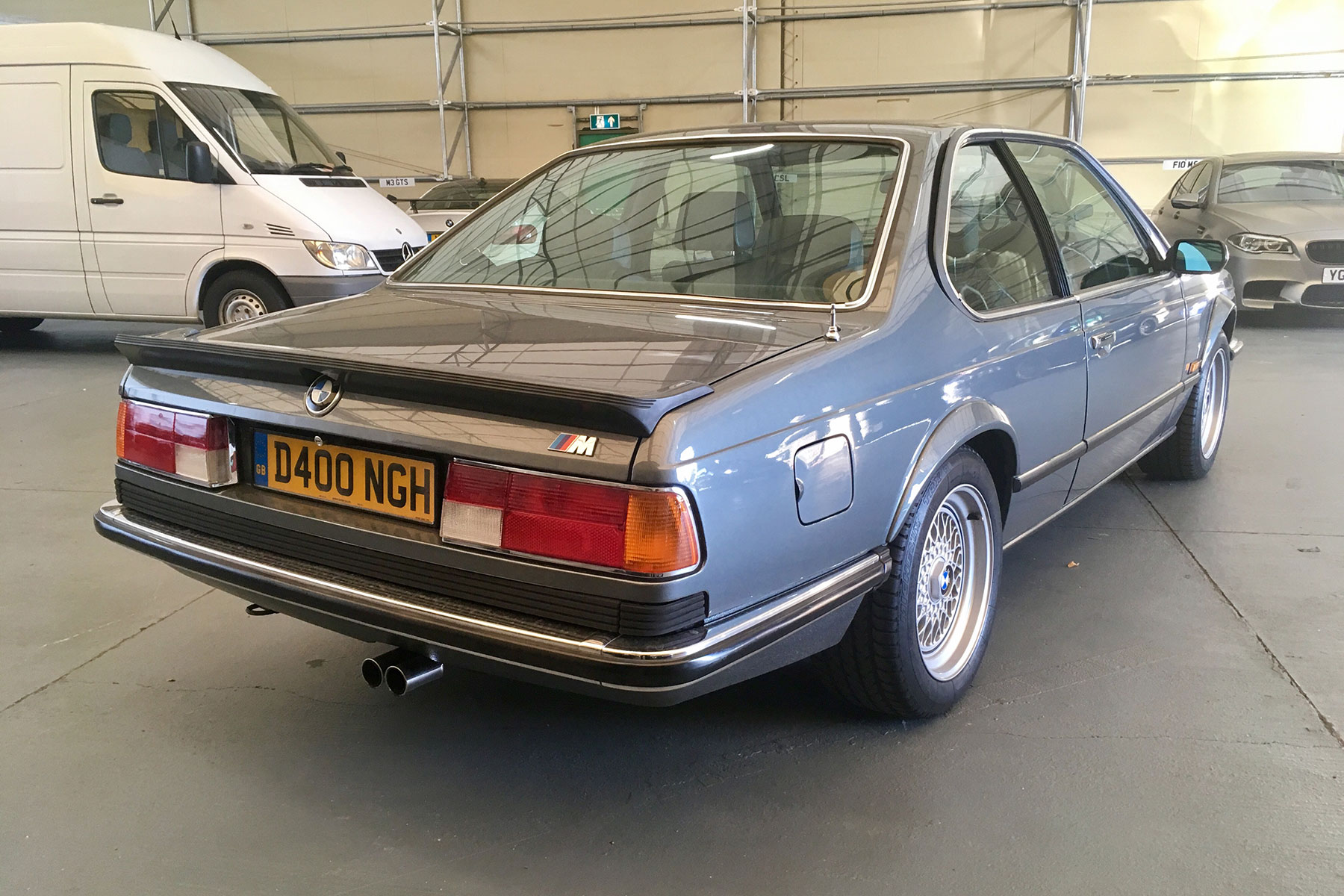 With the same 282hp engine as the M1, the M635 CSi was an M6 in all but name – indeed, it was badged as such in the US and Japan. I drove this car back-to-back with the current M6 last summer and was struck by its syrupy-smooth straight-six and effortless pace. Its ride quality also puts the modern machine to shame.

The M635 CSi hails from that era when German cars were engineered without equal. And, call me a luddite, but its understated, almost-austere cabin is a joy after the glitzy, over-complicated tech-fest that passes for a dashboard in 2017. Prices for this 80s super-coupe are rising fast, and justifiably so.

BMW also owns Mini, of course, so Martin’s kept an example of both Works GP hot hatches for the fleet. The original Mini Cooper S with John Cooper Works GP Kit (to bestow its full, tongue-twisting title) was launched in 2006, with a total of 2,000 assembled by Bertone in Italy. It boasted a 218hp turbocharged four, a mechanical limited-slip diff and a strut brace instead of a rear seat. Serious stuff.

The second Mini GP debuted in 2012, with a stiffer chassis, bigger brakes, adjustable coilover suspension, an electronic diff and a downforce-inducing rear diffuser. The result was akin to a road-legal Mini Challenge car and – again – only 2,000 were made.

Our tour of BMW’s heritage collection concludes with a visit to a nondescript multi-storey car park. Here, in a locked area screened from public view, are two undisputed stars of the heritage collection. The 328 roadster is exquisitely pretty, yet looks tiny for a car worth at least £750,000. It was launched in 1936, three years before Hitler plunged Germany into World War Two, and won its first ever race at the newly-built Nürburgring.

The car parked alongside is worth price as much, however: a cool £1.5 million. The V8-engined 507 is, of course, the inspiration for the Z8 and just 252 were made between 1956 and 1959. Aside from its neat ‘5 BMW’ number plate, this example has the optional hard-top roof. Elvis Presley owned one, famously, and if it’s good enough for The King…

A new report claims that until there is a significant behavioural change, hybrids will be superior to plug-in hybrids in the quest to lower CO2 emissions.
Read more

French Goddess: the history of the Citroen DS

The Citroen DS was one of the most important and innovative cars of the 20th century.
Read more

Black Challenger Hellcat was stolen in September 2018, but found abandoned by a member of the public
Read more

New data released by the RAC shows one in 10 drivers are continuing to make non-essential journeys, despite the government's plea to stay at home.
Read more

The free Alfa Romeo offer means finance payments can be waived for up to seven months. It's intended to give buyers confidence after the COVID-19 crisis.
Read more