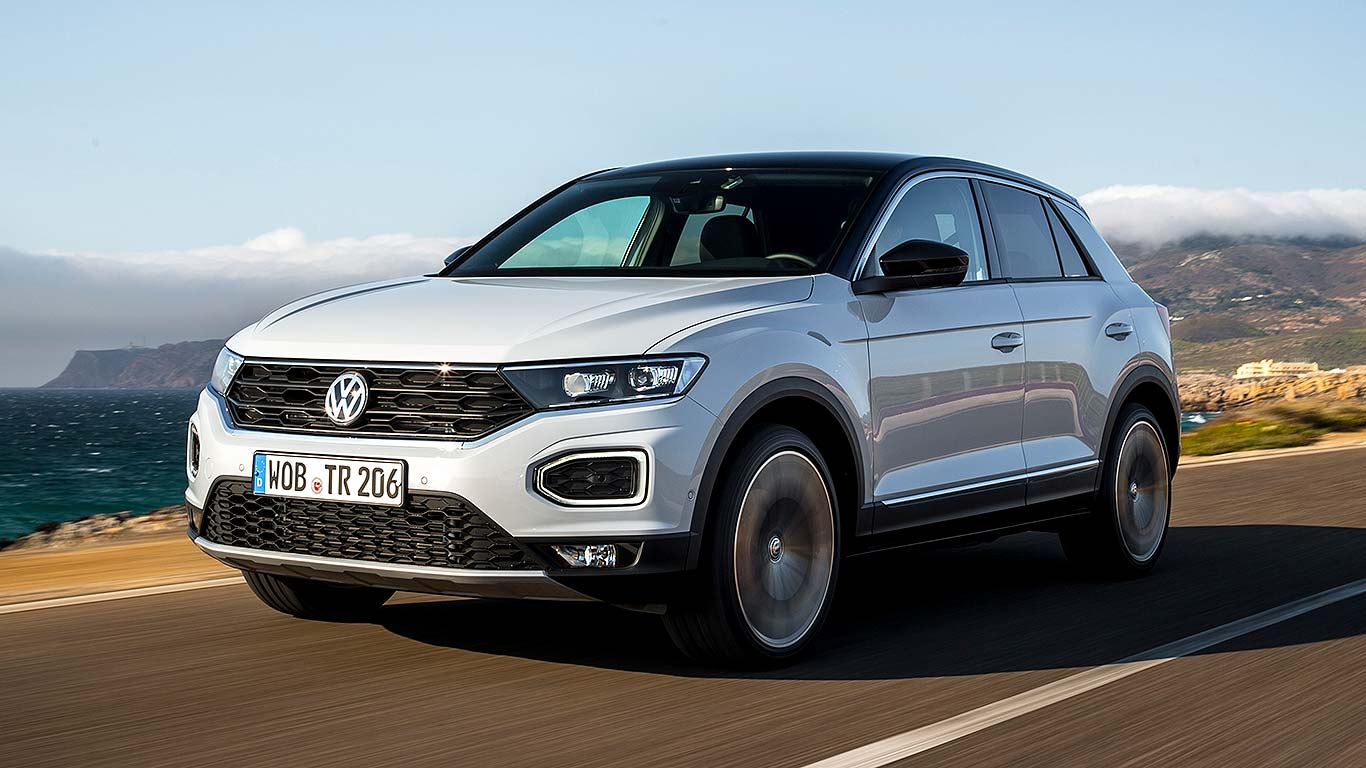 The Volkswagen T-Roc is the new Scirocco. Even the name references it. But unlike an old rocker, the new ‘Roc has changed its tune. People don’t want plain old coupes anymore. They want SUVs. So here’s a coupe SUV.

Volkswagen isn’t daft. If it simply jacked up the suspension of the Scirocco’s coupe replacement, it would have an abomination, whose lack of rear doors would see it set records for not selling. So instead, it’s taken the same practical architecture that underpins the roomy Golf, widened it a bit, shortened it a bit, made it a hefty 121mm taller and a whole lot more striking-looking. Volkswagen, this is most unlike you.

It arrives in showrooms this December, with expectations of orderly queues forming: the UK team is already talking about this becoming one of its best sellers, up there with the Golf (72k units in 2016) and Polo (54k). And because it’s unlike anything else in the range, it’s not worried about stealing sales from other models, either. Not even displaced Scirocco buyers are likely to be too miffed, such is the buzz behind this bold new VW.

The Polo and Golf are UK top 10 best-sellers. How long before the T-Roc joins them? 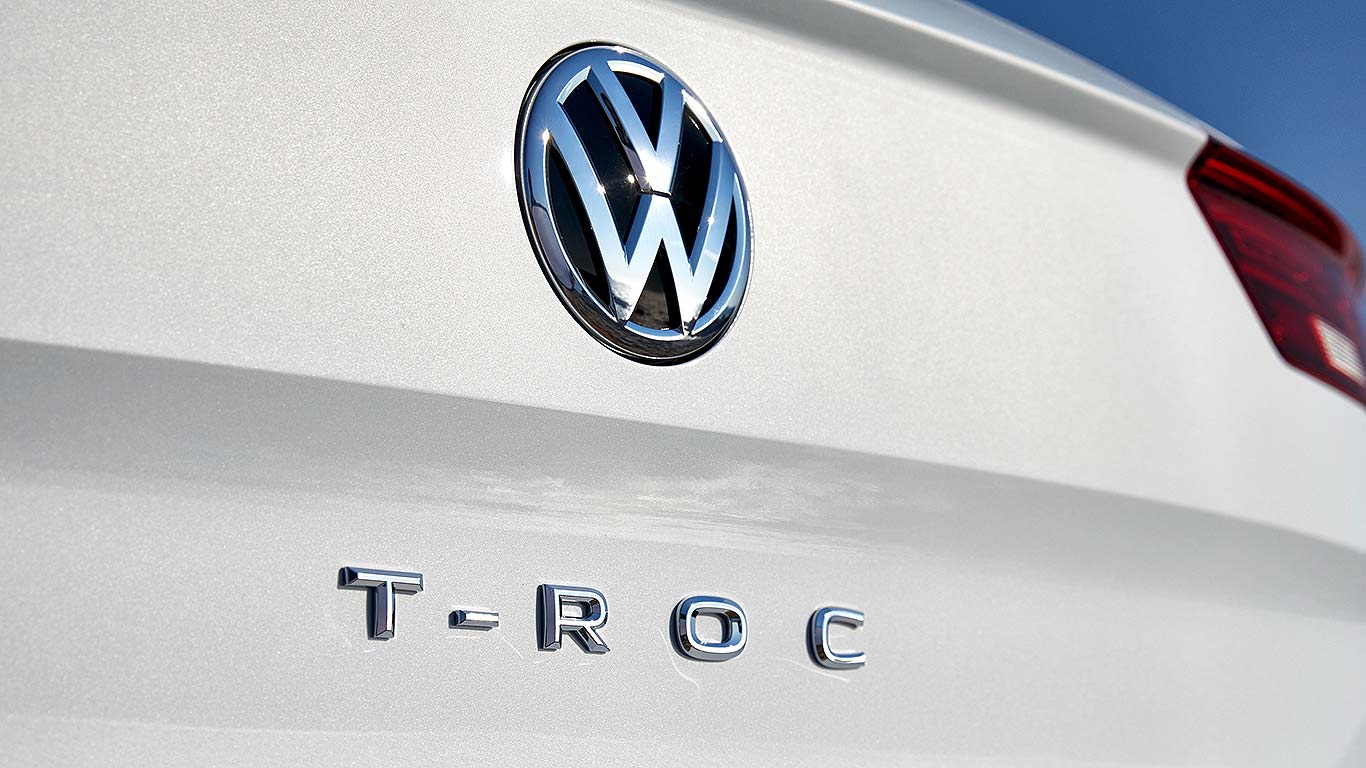 Sharp prices will stir the excitement further. Eager buyers have been hassling dealers so much to place an order, Volkswagen’s rolled out a brace of models for early ordering, starting from £20,425. In today’s money, for a Golf-sized family car, that’s good value. It gets better. When the full range arrives in December, the entry price will drop to around £19,000. That’s the price of a humdrum 100hp Ford Focus Zetec Edition these days! 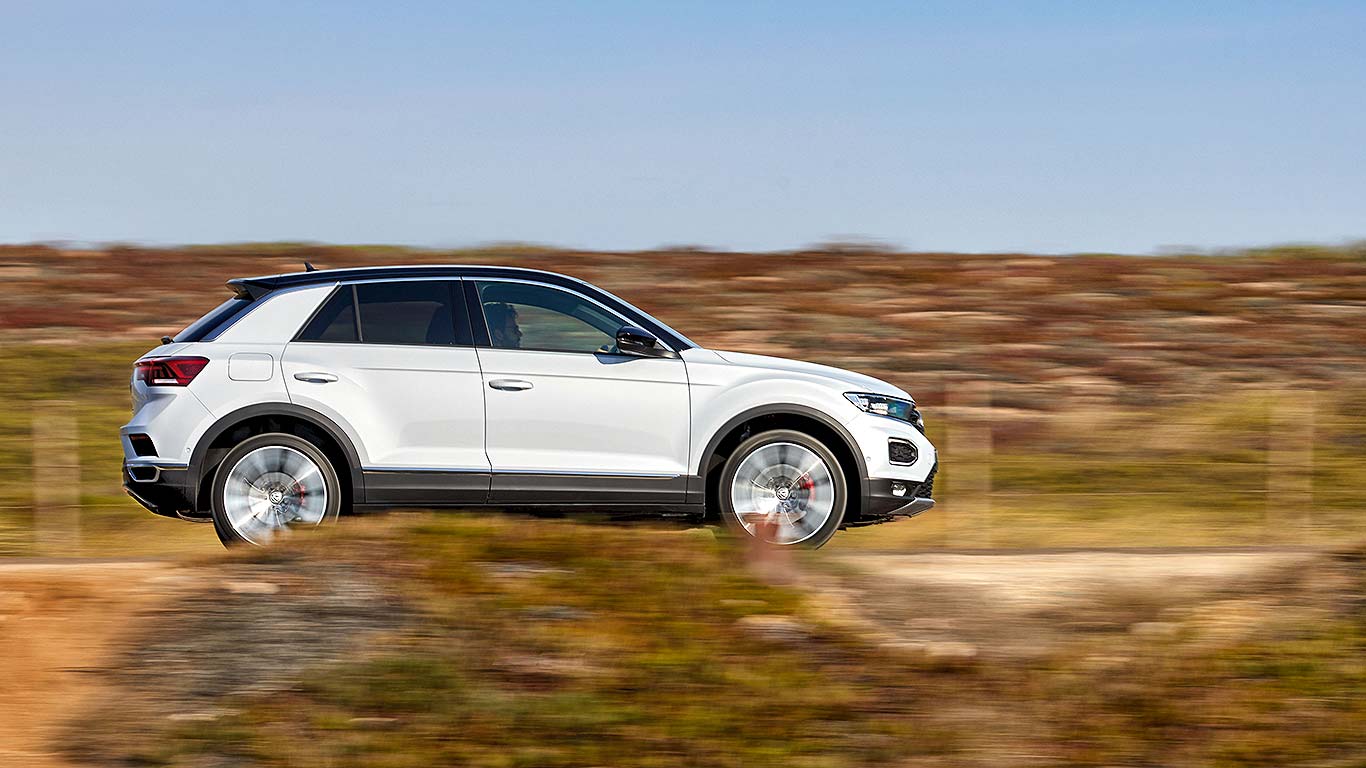 It’s not often you find a Volkswagen turning this many heads. The Portuguese launch reception proves what a head-turner the firm has on its hands, and it’s not hard to see why. The creases are bold, and sharp, the detailing done with a flourish, the coupe cues don’t start and end with the bold rear haunches but are built into the roofline, the steeply-raked windscreen, even the sports sculpting of the bumpers.

Underlining it all is the high crossover SUV stance that gives it a green light for such exaggerated styling. Yet Volkswagen hasn’t gone crazy and forgotten its Germanic orderliness in the excitement. It’s standout, but still cohesive; the bold C-pillar’s geometric strong precision is key here, holding it all together. And while there are lots of bold lines, there are not lots of lines just for the sake of it.

There’s more. Distinctive round LED running lights when in action, that magnetically draw your eye (they blink orange when you indicate). Some bold body colours and Volkswagen’s most contrasting selection of contrast roof colours yet: in total, there are 80 colour combinations. Just try doing that on a Golf. Inside, you can even have bright yellow dashpads, or bright blue. This might be a step too far, but it’s still to VW’s credit that it’s offering them.

Indeed, pay just £700 more to get a design instead of base SE, and you get the dashpads for free – chose either orange, blue or yellow. You can also have the contrast roof in either white, black, red or brown, with matching door mirrors and windscreen pillars. Told you it was striking. The White silver 2.0-litre TSI we started out in, with black roof, was positively restrained by comparison. 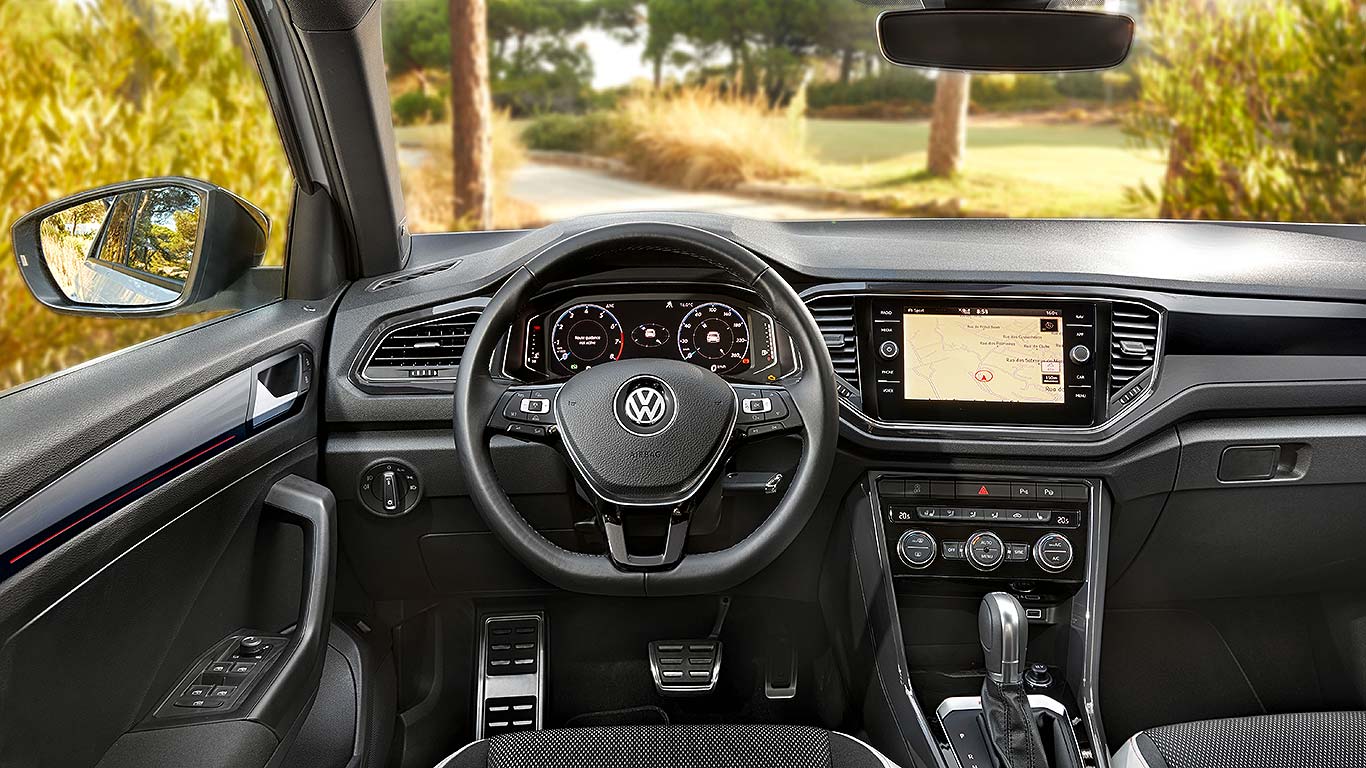 The driving position of the T-Roc feels great. You step up, but not too high, sitting on deep, high-backed and supportive seats. Your legs drop down rather than stretch ahead, the steering wheel moves nice and close, and the view out the deep windscreen is clear and commanding.

Yet you’re not left teetering. The dash is high, the shoulderline is high, so you feel sat in it rather than on it. Land Rover would call this sports command, we call it another reason why the T-Roc sits at the sportier end of the SUV sector.

The design is nice and Volkswagen-grade clear, and the central 8.0-inch colour touchscreen is standard (its glass front is as smart as a smartphone, and Apple CarPlay and Android Auto compatibility means you don’t need sat nav as you can use your smartphone). Optional Audi-style instrument cluster is £405 well spent, and build quality is of course great. Take a punchy-sounded Beats audio branded sound system while you’re there; its 400 watts and subwoofer are perfect for extended Spotify listening. 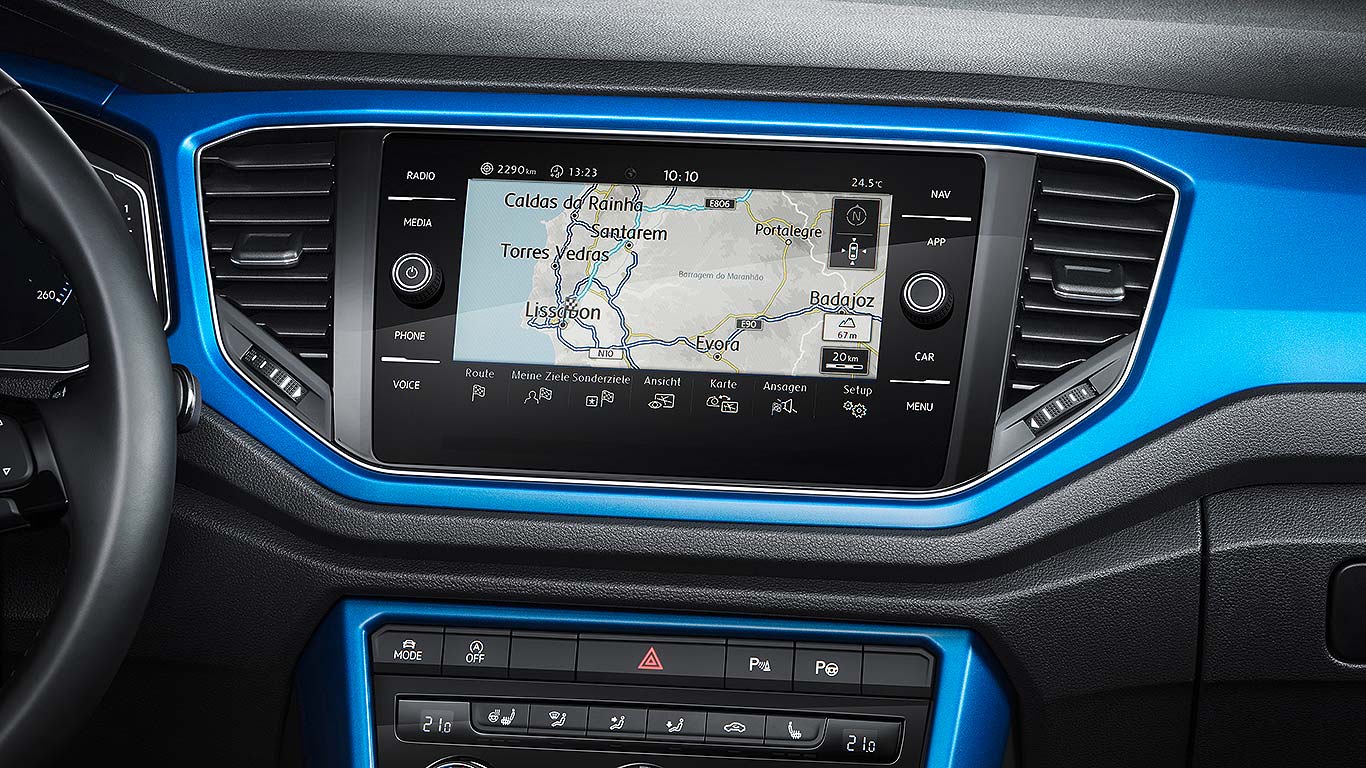 But it’s not perfect. Surprisingly, Volkswagen has used hard, scratchy plastics for the dashboard and door panels, rather than the soft-touch materials you get in a Golf. It’s not excessively shiny so doesn’t look too ‘cheap’, but it’s still a surprising Skoda-grade feature from a brand you expect to be more like an Audi. Quality vibes come from the built-in engineering integrity instead.

A thick B-pillar blocks over-shoulder visibility, although big rear windows mean the view further back is better. In the rear, the base of the door opening is too small (that chunky B-pillar again), so can snag feet, but the rear seat is supportive and again set high, so there’s plenty of footroom and thigh support. Kneeroom is borderline tight though; if your kids are lanky teens, pick a Tiguan instead.

The boot is a good size, at 445 litres seats up (a Golf is 380 litres). It’s not the longest though; its size comes from depth, so get used to clever stacking if you want to maximise it. A typically slow electric tailgate is £320. 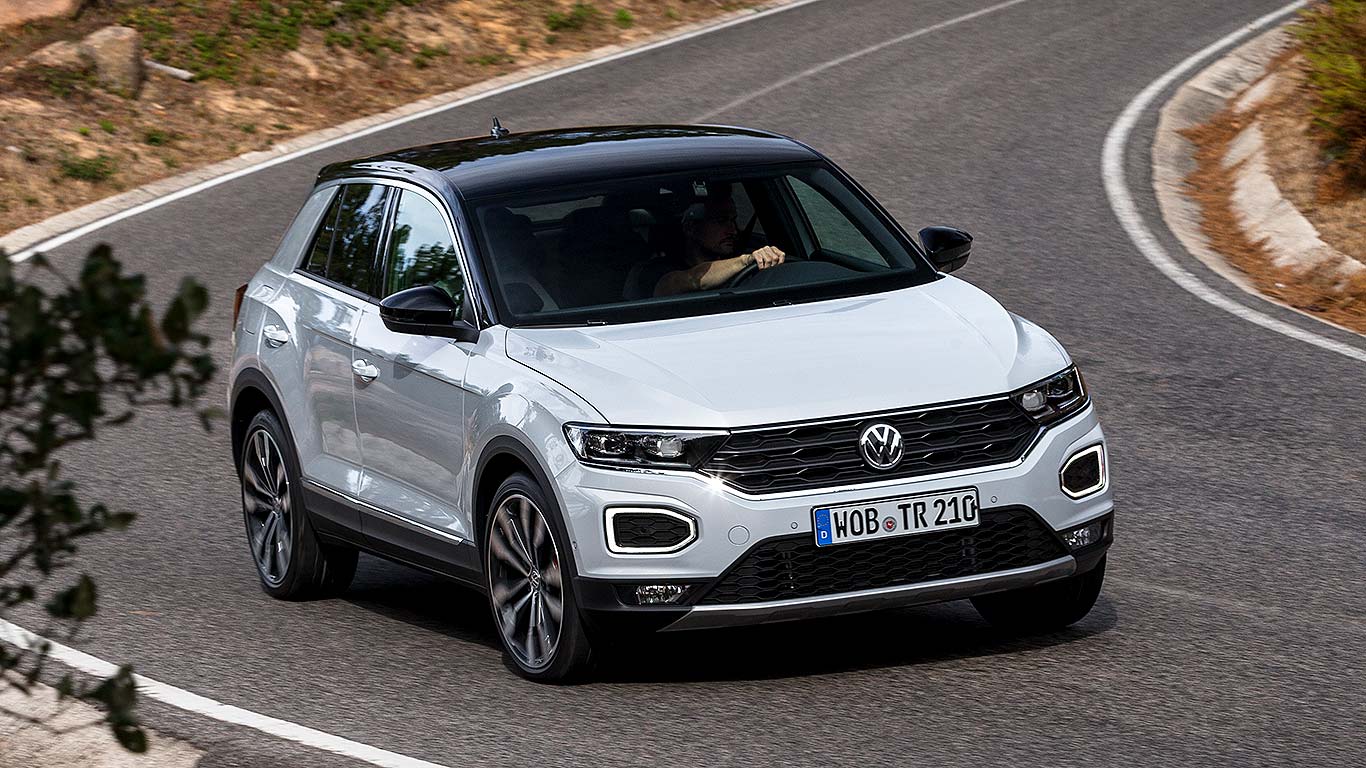 The best-selling UK T-Roc will be the 115hp 1.0-litre TSI, so typically our first drive was of a TSI twice the size with almost twice the power, with twice the driven wheels and DSG for good measure. 0-62mph in just over 7.0 seconds proves its vigour, and 4Motion means you can boot it out of junctions for lightning take-offs, but it wasn’t the star of the show we expected for a motor also used in the Golf GTI.

It was too vocal for one. When revved, it was more intrusive than it ought to be, and the gruff, chundery noise at lower revs was a bit droney. The DSG could be indecisive and the accelerator was too aggressive in sport mode.it easily made light work of Portuguese roads though, for maximum chance to enjoy the chassis.

Unlike smaller SUVs, this feels like a grown-up machine with premium-spec suspension. There’s rarely any need to wince over even the harshest surfaces, as they’re soaked up without crashy teeth-gritting fury. It uses the extra suspension travel over a Golf well, and has all that car’s accuracy and confidence.

Test cars came with Dynamic Chassis Control, an adaptive setup that’s an expensive-sounding £1,025, but which adds extra depth to the drive. At a fast cross-country lick, during those times where it feels a bit soft, switch to sport and tighten up the suspension for a more even drive. When you want the normal system’s comfort back, flick it off.

For a tallish SUV, it’s thus a fun steer, with a squat, tidy feel and confident nature. There’s never any fear in pressing on, aided by the adjustability of the 4Motion system during hard cornering, and simply the good, clear view of the road you have. Ultimately, you’re aware it’s a sit-up SUV, but of its ilk, it’s one of the more engaging ones.

Only at first did the ride feel a bit stiff and jittery, and this was mainly due to the low profile of the 18-inch test car tyres (17”s are standard in the UK). With time, and speed, the suspension does its work and you recognise the integrity. Road isolation is also excellent; the T-Roc rides very quietly, filtering out the worst of the surfaces. The biggest disturbance at speed is wind rustle (and perhaps a bit of engine noise)

We also drove a 150hp 2.0-litre diesel; the TDIs arrive later. It was slower, although performed with reasonably torquey strength in everyday use, although it too proved rather too vocal. You won’t be revving it for fun, that’s for sure, and the clatter you can get at lower speeds is something you’d thought VW had tuned out of its cars by now. Perhaps final production-spec cars will be better. 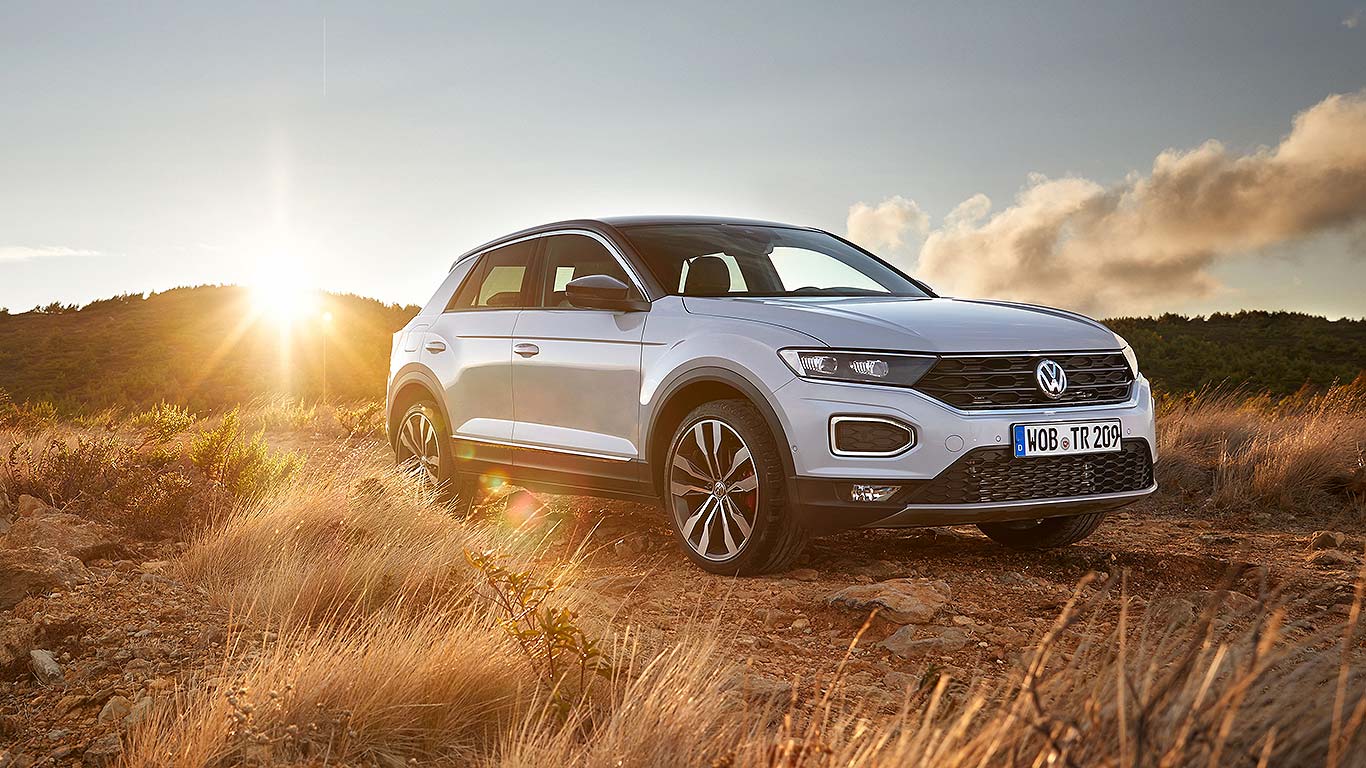 No two ways about it, the Volkswagen T-Roc will sell on looks alone. Rightly so; it’s a feel-good stand-out machine to look at and be driven in, all standout modernity and cool wow factor. Style sells, and it’s going to sell many thousands of T-Roc.

The rest of it stacks up, particularly the pleasing interior, quality of the chassis and overall integrity. Ride refinement is excellent and it’s a comfortable, premium-feel drive. There are some imperfections though. Rear space isn’t quite family grade, the engines are too vocal and we expected better plastics in places for a Volkswagen.

This won’t stop it being a success. The positives outweigh the flaws, and such will be the excitement over the looks and interior, coupled with ballpark Golf prices, that it will be forgiven. Next year’s newest top 10 best-seller debutant is strong. How worried must Nissan be right now?

NEXT> We drive the off-roader that eats Qashqais for breakfast