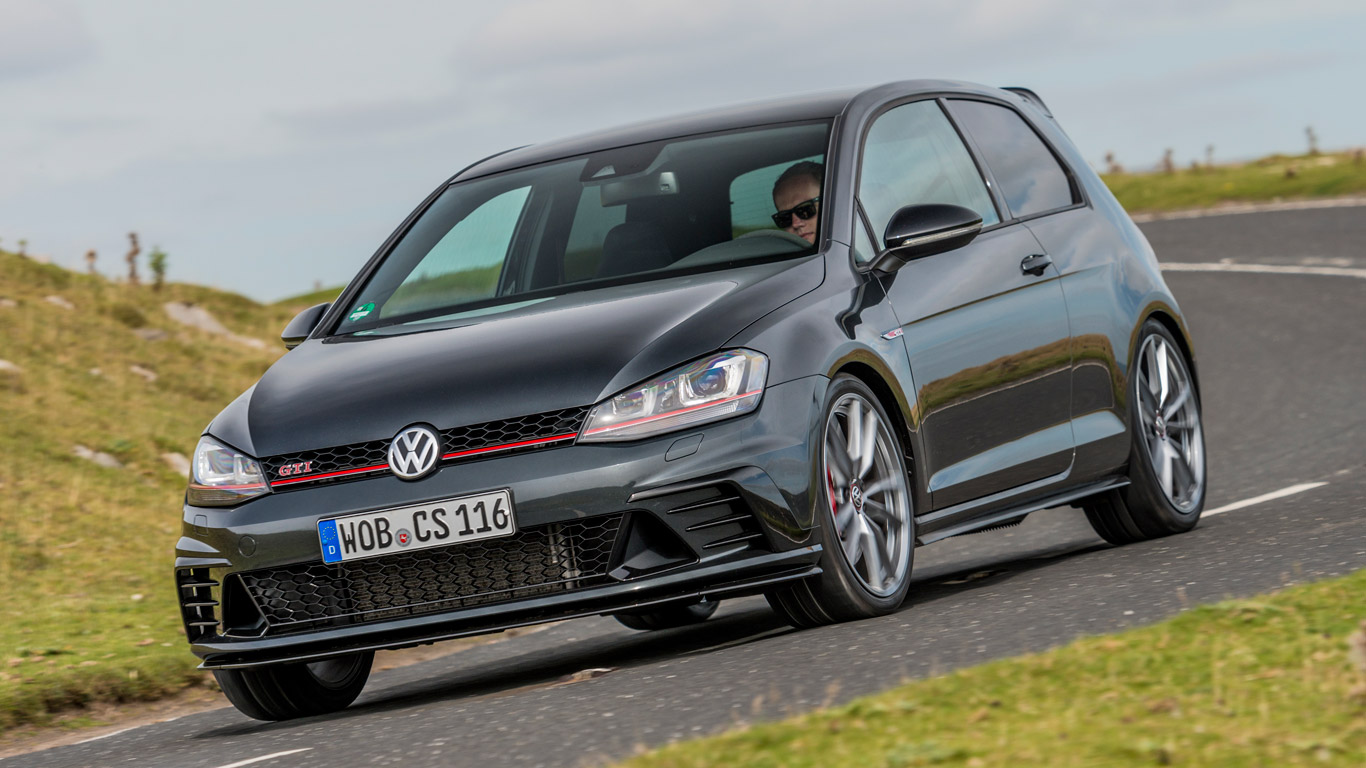 The much-lauded Volkswagen Golf GTI celebrates its 40th birthday this year – and to honour the occasion, VW has launched a bonkers version of the current, seventh-generation car. The limited-edition Golf GTI Clubsport S is based on the regular Golf GTI Clubsport, but with more power, less weight, and a few tricks up its sleeve.

The result is a car that broke the official Nurburgring record for front-drive production cars earlier this year. It completed a lap of the Nordschleife in 7min 49.21 seconds – quicker than a Honda Civic Type R that previously held the record. But how does it stack up on UK roads? We headed to Wales to find out… 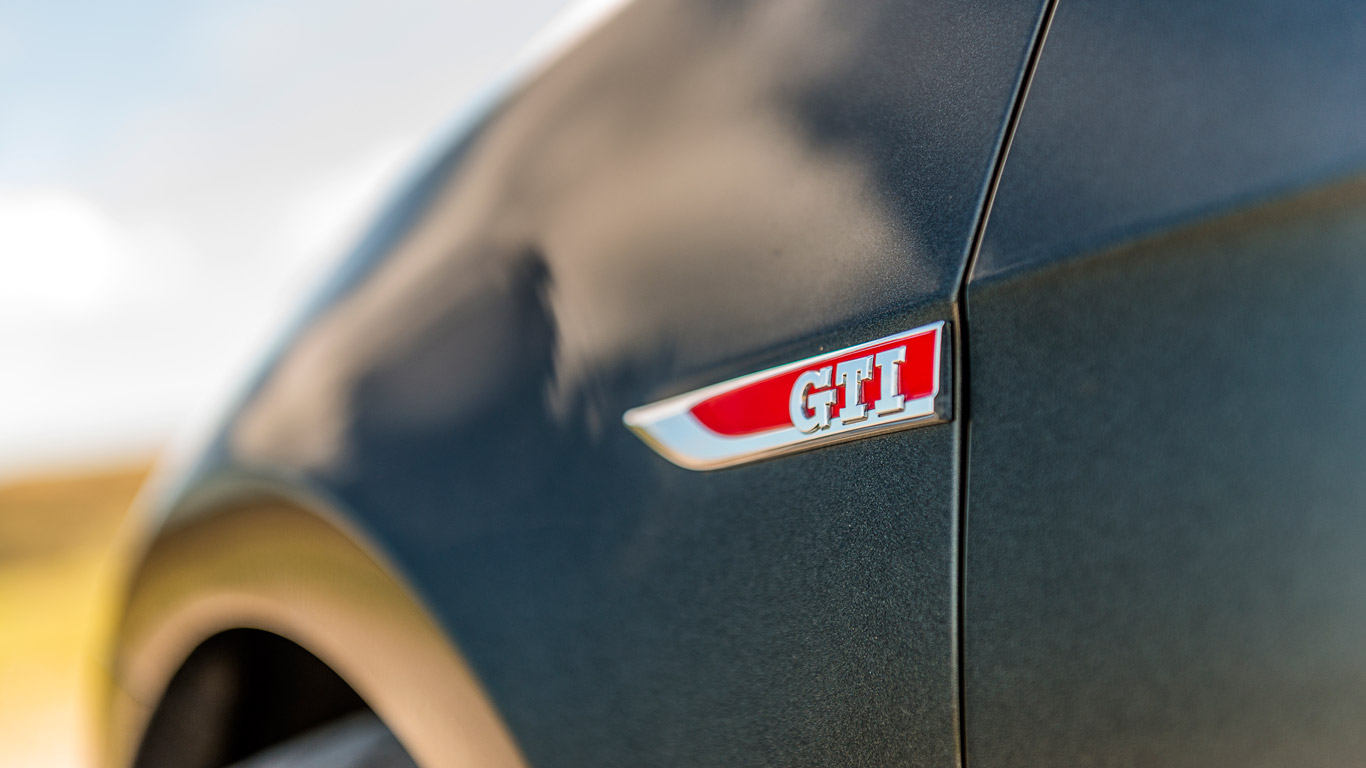 The Clubsport S uses the same ‘EA888’ 2.0-litre four-pot as all fast Golfs, but with power turned up to 310hp. That’s a whopping 90hp more than a regular Golf GTI, and even 10hp more than the Golf R. This is achieved using a remap and a bespoke exhaust system using 65mm tailpipes.

The Clubsport S will hit 62mph in 5.8 seconds. That’s half a second quicker than a regular Clubsport, which in turn is 0.2 seconds faster than a GTI. The Golf R, with its four-wheel-drive system aiding grip off the line, does it in 5.3 seconds.

It’s no Volvo XC90, but as performance cars go, the Clubsport S isn’t overly hardcore. Our test car was fitted with optional bucket seats which, while providing a firm hold during enthusiastic driving, would probably stand up to a long day behind the wheel. 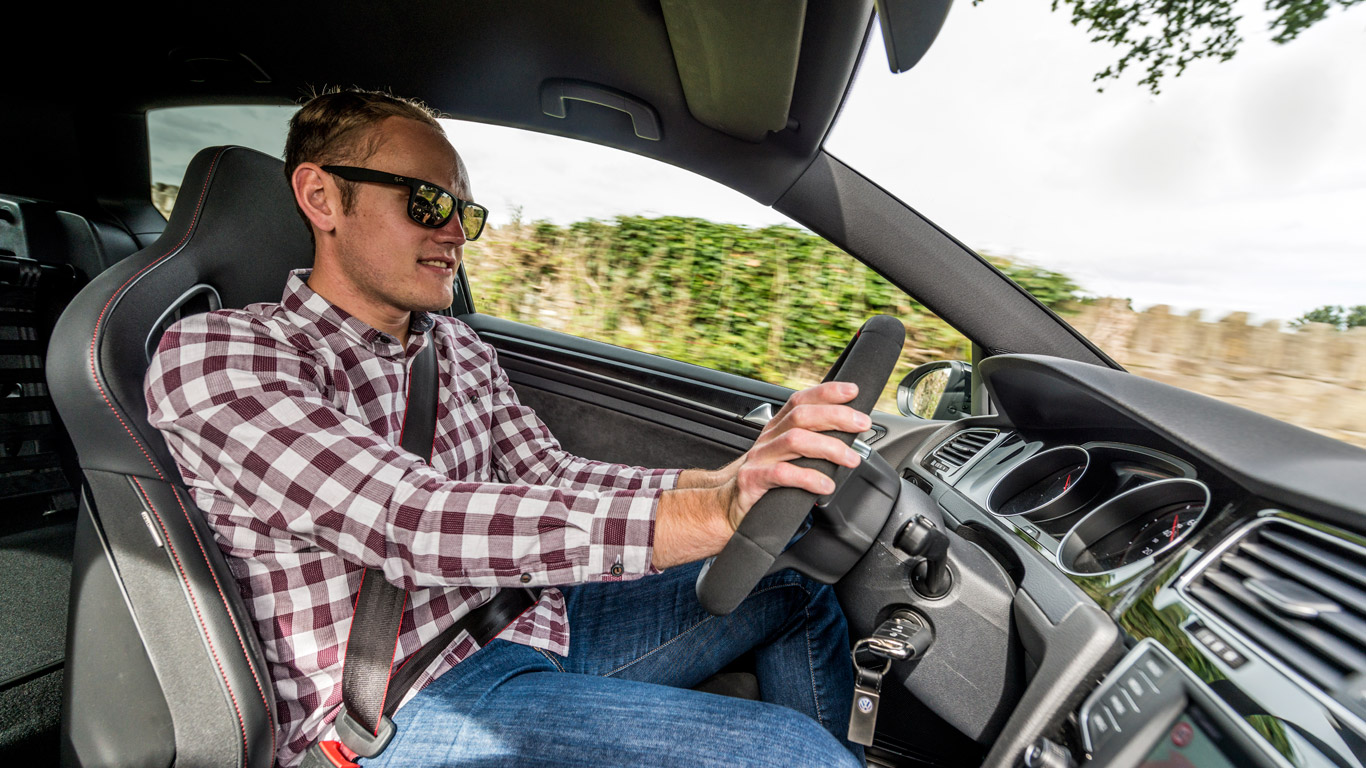 This car has been developed on the Nurburgring – and that transfers perfectly to the bumpy, twisty Welsh roads where we’re testing the Clubsport S.

It’s not just the ferocious pace that makes the Clubsport S hilarious to drive. The way it handles is incredible. Turn into a corner and its perfectly-tuned electric steering provides a clear idea of what the front wheels are doing and – as they’re shod in uber-sticky Michelin Pilot Sport Cup 2 tyres – that’s generally little more than gripping as if their lives depend on it.

If you do coast into a bend a smidgen too quick, you have two options – bail by going hard on the brakes, or give it more gas. The latter is the braver move, but once you start to trust the Clubsport S, it’s incredibly rewarding. Squeeze the accelerator mid-bend and the electronically-controlled limited-slip diff transfers power between the front wheels and does an incredible job of almost eliminating understeer entirely.

When you’re not driving at ten tenths, it’s impressive how sedate the Clubsport S can be. The adaptive dampers (fitted as standard) provide a firm but certainly bearable ride, while noise levels are acceptable when you’re not nudging the redline. 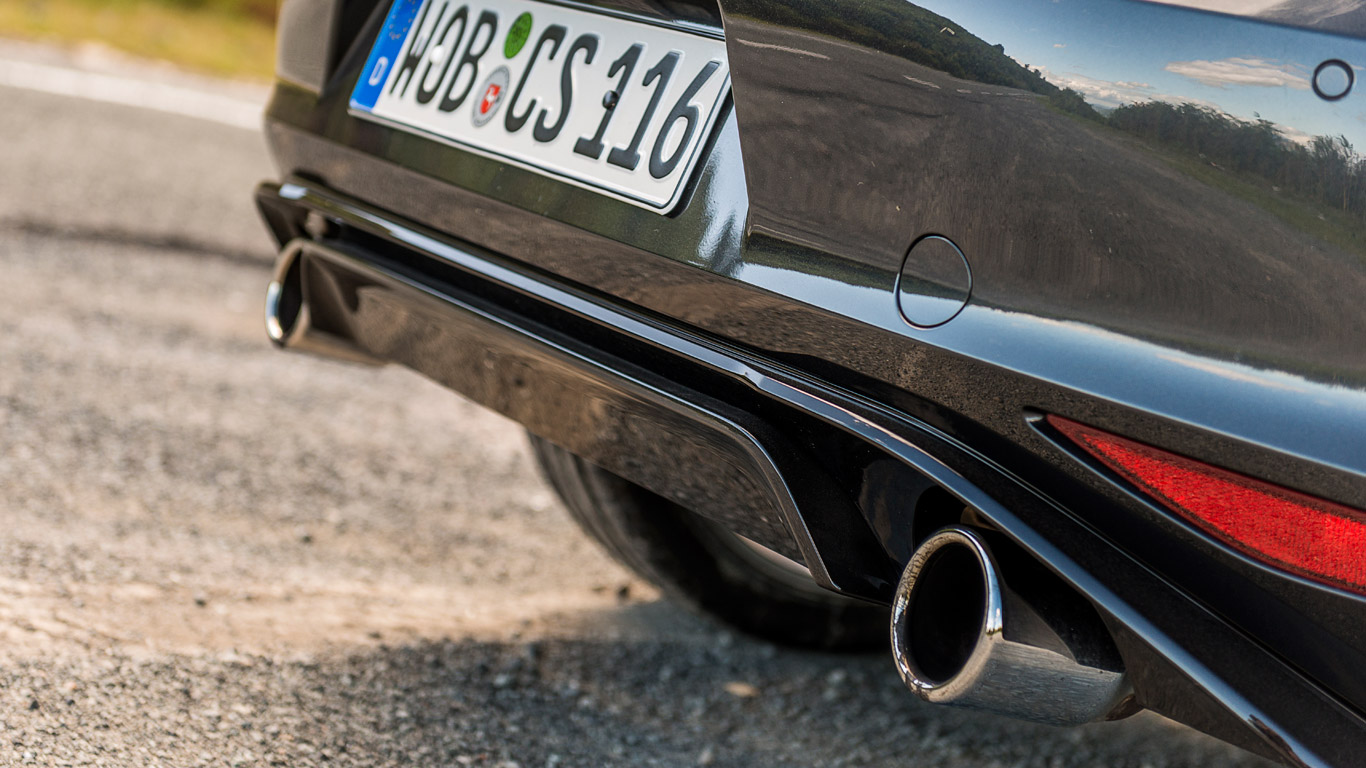 Officially the Volkswagen Golf Clubsport S will return 38.1mpg and emit 172g/km CO2. The latter means it will cost £210 a year to tax, while the former means realistically you’ll be looking at mid-30s fuel economy with a bit of careful driving. Attempt to replicate the Nurburgring lap time and you better be comfortable with regular visits to the petrol station.

From the driver’s seat, the Clubsport S’s interior is relatively sane. The dash is typical Golf – well made, with everything where you’d expect it to be. There’s a numbered plaque behind the gearstick identifying it as a limited edition, while you can opt for all manner of luxuries: from a rear-view camera to heated seats.

There is a but…

Golfs, even in performance guises, are generally seen as fairly sensible family cars. The Clubsport S, however, only has two seats. Yup, for weight-saving reasons, the Golf’s rear seats have been removed, with a strut brace taking their place.

That aside, it’s not impractical. The boot is huge and the rest is, well, like a Golf. 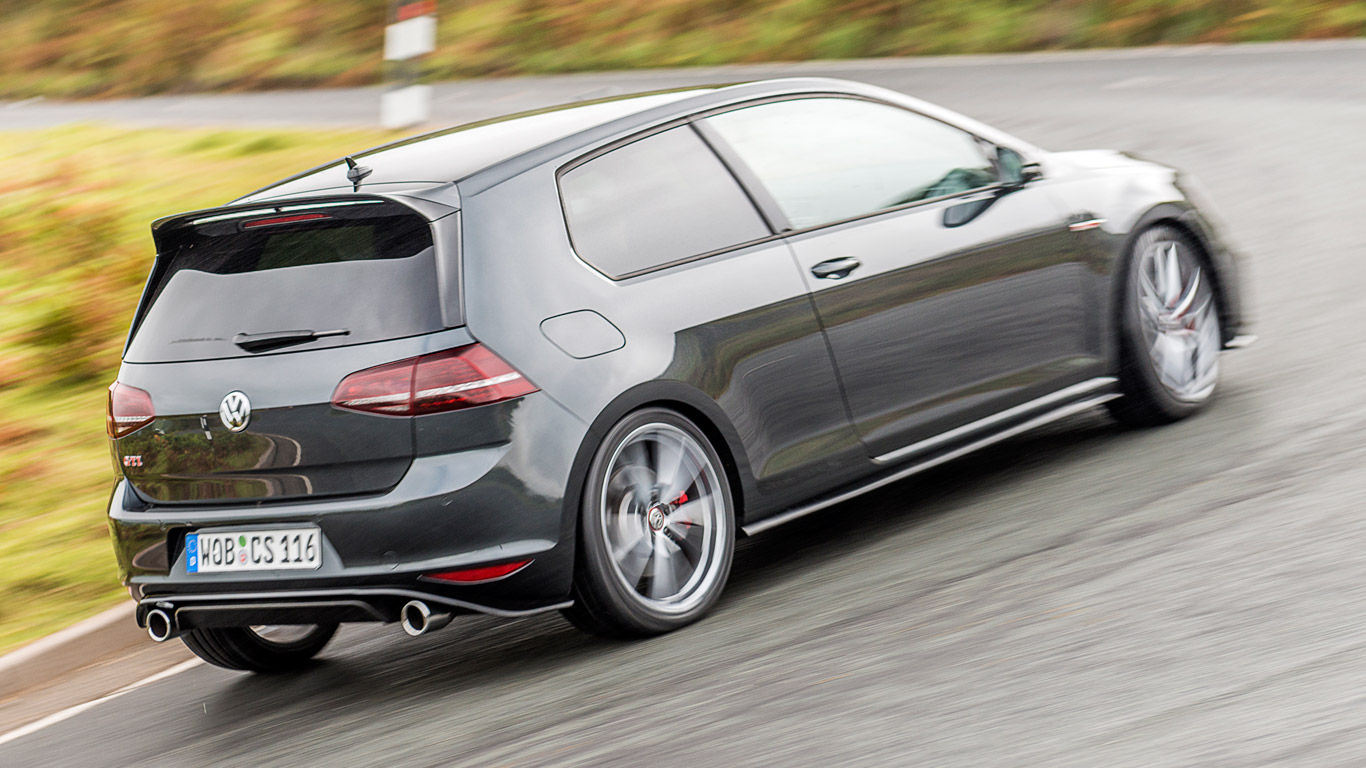 Adding clever tech to the Clubsport S defeats the point: it’s all about weight-saving and handling improvement in a bid to save crucial seconds off its Nurburgring time. An aluminium front subframe contributes to the 30kg weight reduction, while revised suspension bushes and unique front and rear toe and camber angles aid handling.

The hot Golf’s tuned suspension, semi-slick tyres and advanced traction control systems mean you’d have to be trying very hard to push it beyond its capabilities. If it does go wrong, you’re in a Golf, with all the standard safety kit that entails. It’s got to be a more pleasant car to crash than a more focussed, stripped-out track car.

If you can get your hands on the Volkswagen Golf Clubsport S, you’re limited to just three colours: red, white or black. Yes, the one we’ve driven in Wales (and pictured here) is grey… it’s a one-off prototype brought across from Germany for us to try. You can’t buy one like this, sorry. 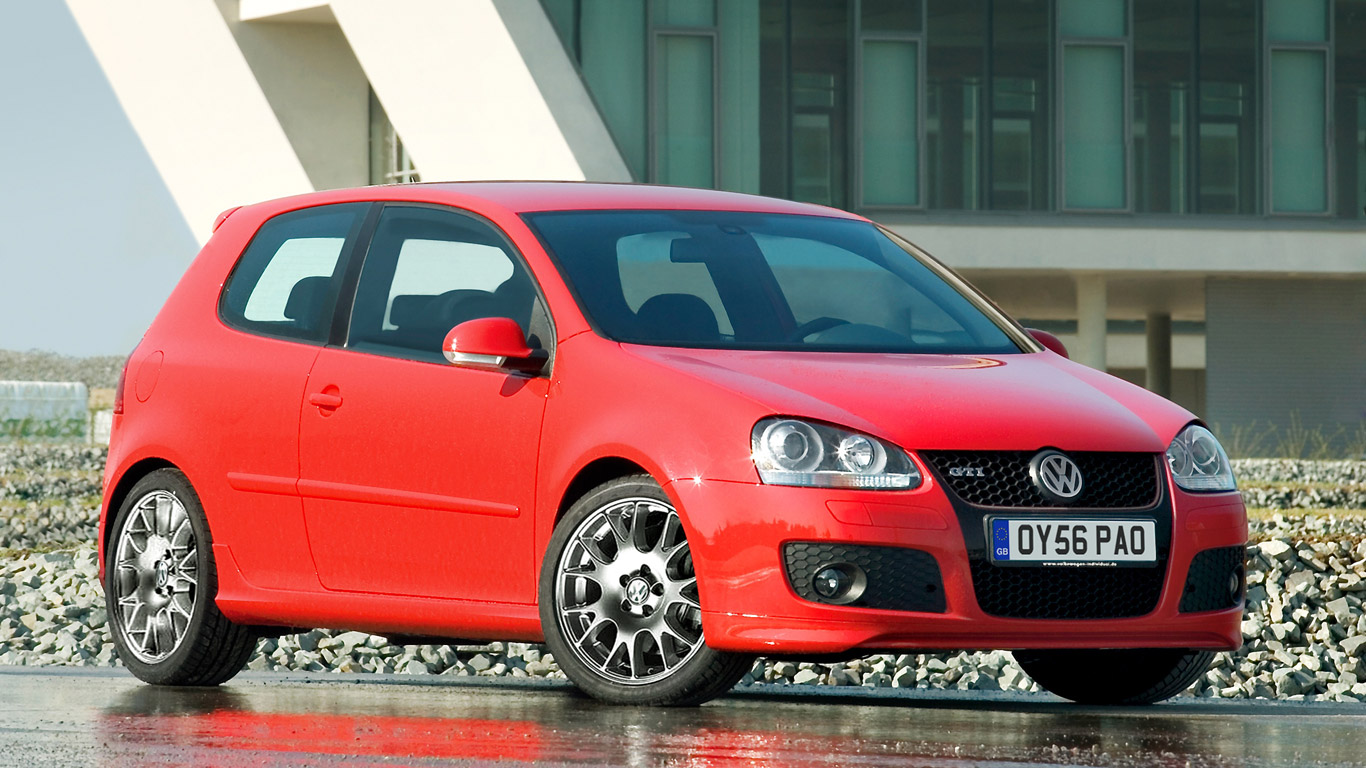 It’s hard to believe that the Volkswagen Golf Edition 30 is 10 years old now, but we’d definitely be tempted by one on the used car market. While not as extreme as the Clubsport S, 1,500 Edition 30s were built, with various bits of colour-coding and unique 18-inch alloys. Power was boosted to 230hp.

Hit the classifieds and you can pick up an Edition 30 from as little as £6,500 – or around £8,000 for a good one. While it won’t be the investment of the century, you will be buying one of the most desirable Golf GTIs ever for a relatively modest amount of money.

Realistically, we’d probably be swayed at the last minute by the Golf R and its passenger-carrying and greasy-road tackling abilities over a Clubsport S. Alternatively, if it’s a track car you’re after, £33,995 (before options) buys you a myriad of more focussed possibilities.

But if you’re a hardcore Golf GTI fan – and can somehow get on the waiting list (good luck with that) – the Golf Clubsport S is arguably the ultimate fast Vee-dub. We’d be mighty jealous of your purchase.

When setting its record-breaking Nurburgring time, the Clubsport S was driven with its suspension in ‘comfort’ mode. This allows the electronically-controlled dampers to absorb the monster bumps the ‘Ring delivers – and lets the driver jump over kerbs. It’s also the best setting for Wales.