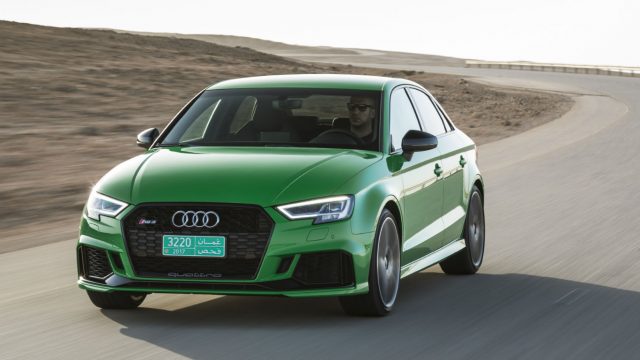 Audi has turned the screws on BMW and Mercedes-Benz. The new RS3 outguns both the M2 and A45 AMG, with 400hp to the AMG’s 381hp and the M2’s paltry 370hp. Yet this battle is more than a race for headline numbers. Ultimately it’s about which is the best and most entertaining car to own. We’ve been to Oman to push the RS3 to its limits.

First, though, the all-important visual credentials. A wider track, subtly pumped-up front wheelarches and a redesigned ‘blade’ in the bumper show sporting intent. UK cars get titanium highlights, but sinister gloss black is an option. At the rear there’s an RS-specific roof spoiler, and a deep black diffuser between the waffley oval tailpipes. The exhaust sound is all-important. 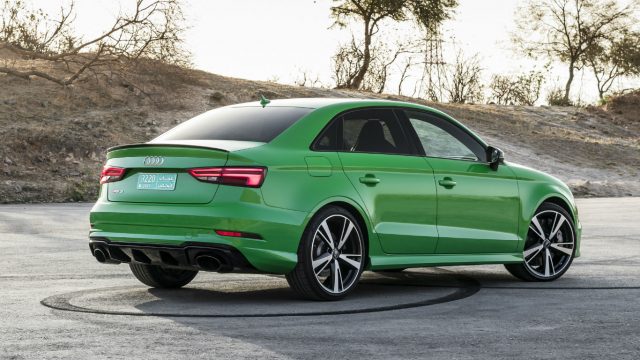 Two-part big news. First is that alongside the Sportback there’s an RS3 saloon for the first time. That’s aimed at bringing more US and Chinese buyers into the fold, but reckon on seeing a fair few on UK roads, too. It’s an added dimension, although surprisingly the seats-up luggage space is a touch smaller than you get in the Sportback.

The second major development is the engine, which has had a complete makeover. Still a charismatic 2.5-litre five-cylinder, the block is now aluminium alloy rather than iron graphite. That makes a large contribution to the 26kg weight saving, and helps make the RS3 more agile in the corners. 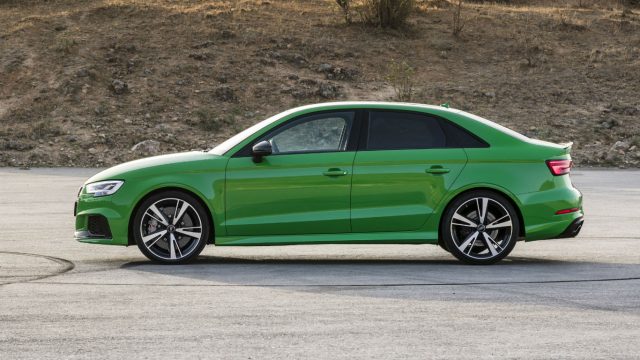 Enough of the static detail. What’s the RS3 like to drive? Fabulous, fantastic, awe-inspiring – you think of the adjective. Four-hundred horsepower is a mighty amount of power in any car, but in a compact hatchback sensational speed is guaranteed. The RS3 reaches 62mph in 4.1 seconds and is limited to 155mph, although you can optionally remove the speed limiter to let the Audi reach its true maximum of 174mph. We’re not quite sure where you’d make use of that, but it brings excellent bragging rights.

There’s a very easy-to-use launch control, which gets the most out of the S Tronic double-clutch gearbox from a standing start. Impressive enough from the driver’s seat, passengers will involuntarily whoop at the shock of being shoved so violently back into the seat as the RS catapults towards the horizon. There’s no manual transmission option, but that’s not a problem. The seven-speed S Tronic is well matched to the car’s power characteristics, with the ability to fine-tune the changes, as well as the steering and suspension characteristics, via the central control screen.

Get the RS3 on the right road and there’s much entertainment to be had. The 2.5-litre single-turbo engine picks up instantly, and then the speed at which your progress changes is largely down to your right foot. It would be just greedy to ask for more power, such is your freedom to exploit pretty much all the 400hp on offer.

Fire up the Quattro 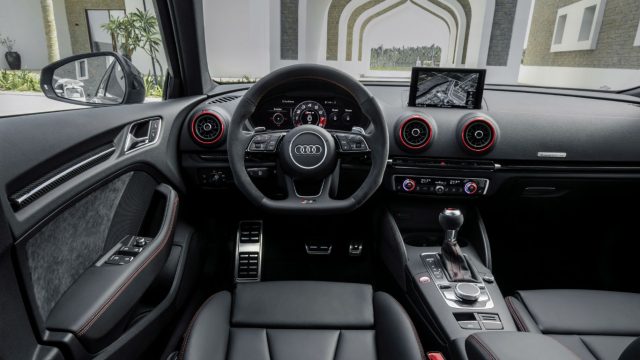 Much of the RS3’s prowess is down to Quattro four-wheel-drive, which has undergone further refinements since the pre-facelift RS3 was launched a couple of years back. Drive to the rear wheels is dependent on the demand and, although this varies continually, you are never aware of changes. The RS3 drives like a very good hot hatchback, and this nimbleness is to its advantage over the (previous) RS4 models, which have the edge in horsepower but not agility.

Options include front ceramic brakes that bring improved high-speed retardation. However, as you’ll probably only notice the difference on a racetrack, you should question the £6k additional cost. Magnetic Ride, though, is a well worth the balance it brings between low-speed ride and agility on faster sections.

And then there’s the sound. Audi had an easy job making the RS distinctive. Five cylinders, with a firing order of 1-2-4-5-3, is all you need to build a characterful soundtrack. With the exhaust set to Dynamic, the sound is simply sublime – standing roadside next to an RS3 driving by at full throttle will send tingles down your spine. 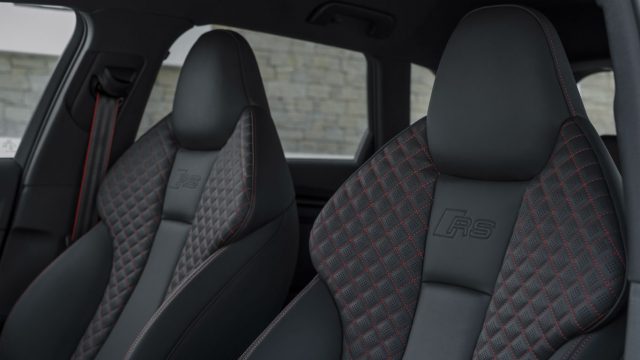 You’ll want some special touches to move the RS3 apart from a regular A3 inside, and it’s there for the asking – as long as you are prepared to dig deep. There are some nice colour packs that add pizzazz to the dashboard and air vents. Audi’s marvellous Virtual Cockpit may well be a standard feature (Audi UK hadn’t made up its mind as we went to press), and it includes some RS-specific features – such as displays for torque, power output, and G forces.

Seating is critical when the cornering forces are so high. The test cars had the optional diamond quilted RS sports seats in Nappa leather, which give all the support you could wish for. Space in the rear is decent for the size of car: good for four adults, but obviously roomier than the BMW M2 (which is a two-door coupe, of course).

The ultimate hot hatch – or saloon 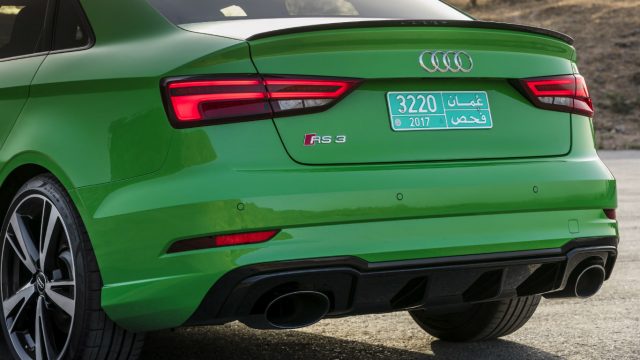 While it’s hard not to like the BMW M2, or the more aggressive attitude of the Mercedes A45 AMG, the RS3 is simply the better all-rounder. Easier to drive fast, and more pleasant when all you need is a regular hatchback (or saloon) that’s nice to live with. You make fewer compromises with the RS3, and to us that makes it a winner.

The Audi RS3 goes on sale later in 2017, with first UK deliveries expected at the tail end of the year. Prices will start at around £45,000, with the saloon a little more. Don’t plan on getting away with less than £50k, though. The options list is simply too tempting.