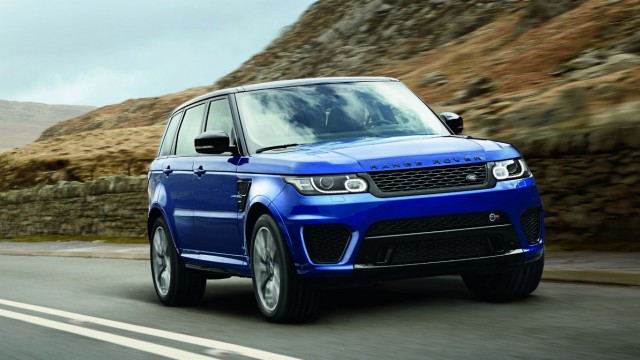 BMW has M series, Mercedes-Benz has AMG… and now Jaguar Land Rover has SVR. And how better to launch a performance sub-brand than by shoehorning the 550hp V8 from the Jaguar F-Type R into a Range Rover Sport? The result is an SUV with performance to embarrass many sports cars. All that power comes at a price, though: around £95,000 before options.

This is the first of many SVR models to come from Birmingham-based JLR. Expect to see SVR versions of the Range Rover Evoque, Jaguar F-Type and Jaguar XE in due course. 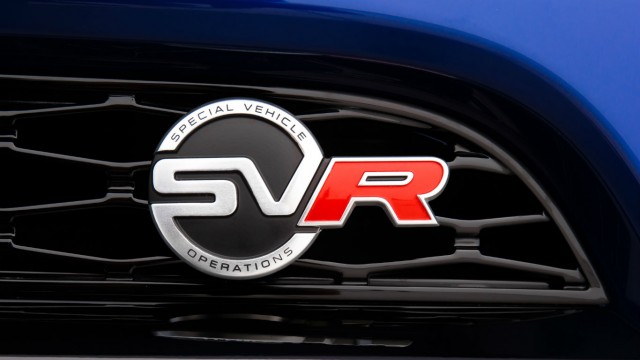 No surprise that most of the SVR’s rivals hail from Germany. The 575hp BMW X5 M, 585hp Mercedes-Benz GLE 63 S AMG and 520hp Porsche Cayenne Turbo all offer comparable performance for (not much) less than £100,000.

Alternatively, for a few dollars more, there’s the £160,000 Bentley Bentayga. Despite boasting a 608hp W12 engine, it’s a less sporty proposition than the SVR. However, if you want the ultimate SUV, the Bentley fits the bill. 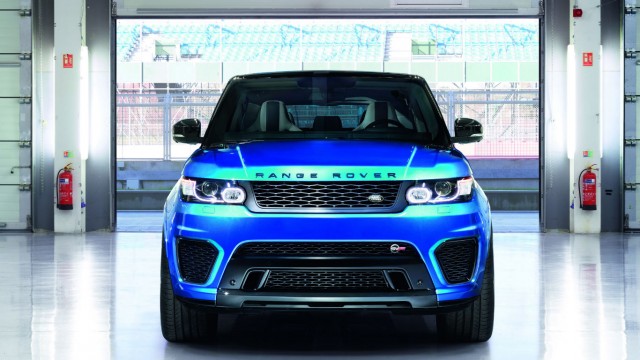 The thunderous V8 from the Jaguar F-Type R certainly hasn’t been toned-down here. Exhaling through four monster tailpipes, it spits, pops, growls and roars. Open the exhaust flaps via a button on the dashboard and it’s downright anti-social. Nothing this side of a TVR turns more heads.

Fortunately, the SVR isn’t  all mouth and no trousers. With 550hp and 507 lb ft of torque, it sprints to 62mph in 4.7 seconds. Top speed is 162mph – not bad for something with the aerodynamic properties of a garden shed. An eight-speed semi-automatic gearbox is standard. 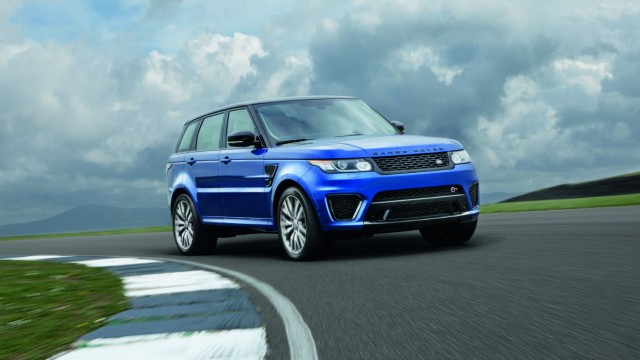 The sportiest Range Rover Sport is dominated by its engine. It’s absurdly, hilariously quick – you’ll need Tibetan-monk levels of self-restraint to stay within the law. All that torque makes it an effortless motorway cruiser, though. Shame the ride is so firm around town, but that’s the price you pay for track-honed handling.

Track-honed? Yes, the SVR may have the usual Terrain Response off-road gubbins, but many of its development miles were spent at the Nurburgring – and it shows. It changes direction with an agility that’s almost unbecoming of a 2,335kg SUV. There’s a huge amount of grip and the brakes offer more bite than a Great White. Only a Porsche Cayenne comes close for driving excitement. 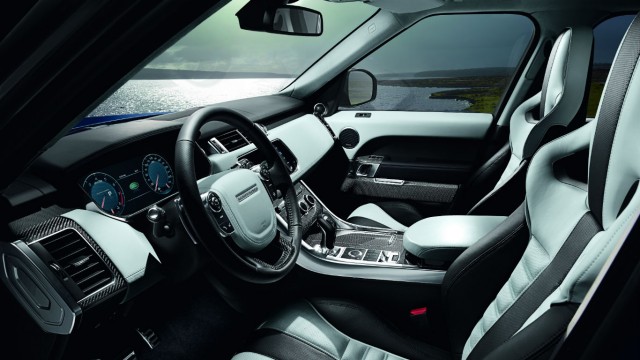 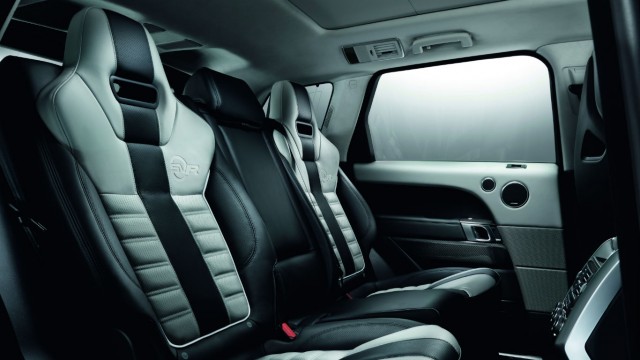 Not all SUVs are as spacious as they look (have you sat in a Porsche Macan?), but the Sport’s boxy lines do translate into a lot of interior room. Driver and front-passenger get surprisingly-snug bucket seats swathed in two-tone leather. The rear bench is sculpted in a similar style, which looks great but leaves the middle passenger with the ‘hump’ (perhaps literally).

The boot holds 784 litres with the rear seats in place – more than twice as much as a Volkswagen Golf. 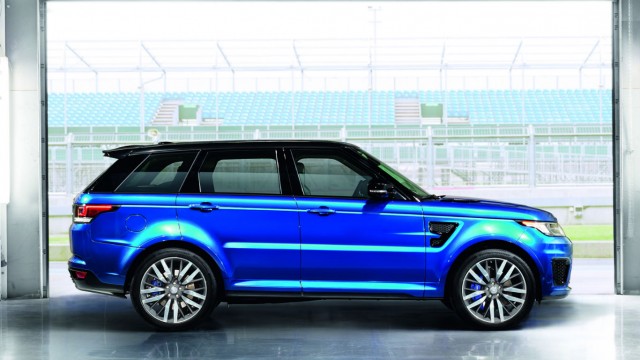 Euro NCAP hasn’t crash-tested the Range Rover Sport, but the car’s sheer size makes a good result look likely. You can’t defeat the laws of physics, after all. Factor in excellent brakes and a long list of standard safety kit, including advanced stability control and hill-descent control for driving off-road, and the SVR seems a safe bet.

Even if you never leave the Tarmac (as most SVR drivers surely won’t), Land Rover’s proven four-wheel-drive system offers improved traction in slippery conditions. Fit your SVR with winter tyres and it would be almost unstoppable on snow and ice. 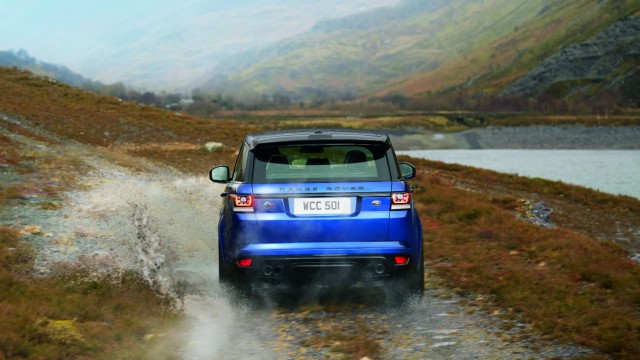 At the risk of concocting a bad football chant, there’s only one SVR. Land Rover doesn’t plan to dilute the brand by building a diesel version – and you can’t have an SVR bodykit on your common-or-garden Range Rover Sport either. 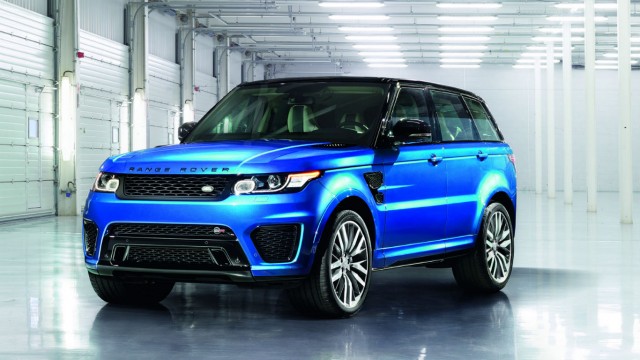 There’s no sensible argument for buying a Range Rover Sport SVR. It has far more grunt than you’ll ever need and consumes fuel at rate that would alarm even OPEC. But we suspect cars like this won’t exist for much longer. Give it 10 years and they will probably be legislated out of existence, so maybe you should buy this charming British brute while you still can. 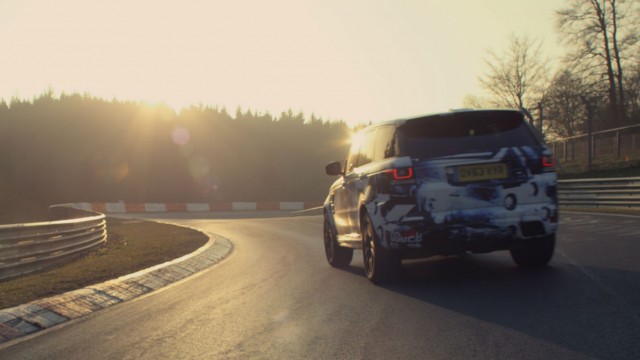 The Range Rover Sport SVR is officially the fastest SUV around the Nurburgring. A prototype version lapped the 13 miles and 70-plus corners of the famous Nordschleife circuit in 8 minutes and 14 seconds.

Budget 2018: key points for motorists and how the industry reacted

Motorists are set to benefit from a major cash injection for new roads, described as the biggest ever for England's major routes
Read more

Emerson Fittipaldi and other motorsport legends are racing online this weekend

Legends Trophy has been added to the third round of The Race All-Star Esports Battle, featuring an array of motorsport greats
Read more

The Mazda 3 is named Women's World Car of the Year 2019 at the Dubai International Auto Show. Category winners include the Kia XCeed and Porsche 911.
Read more