We drive the fourth-generation Mazda MX-5 on UK roads. Is it as brilliant as you may expect? 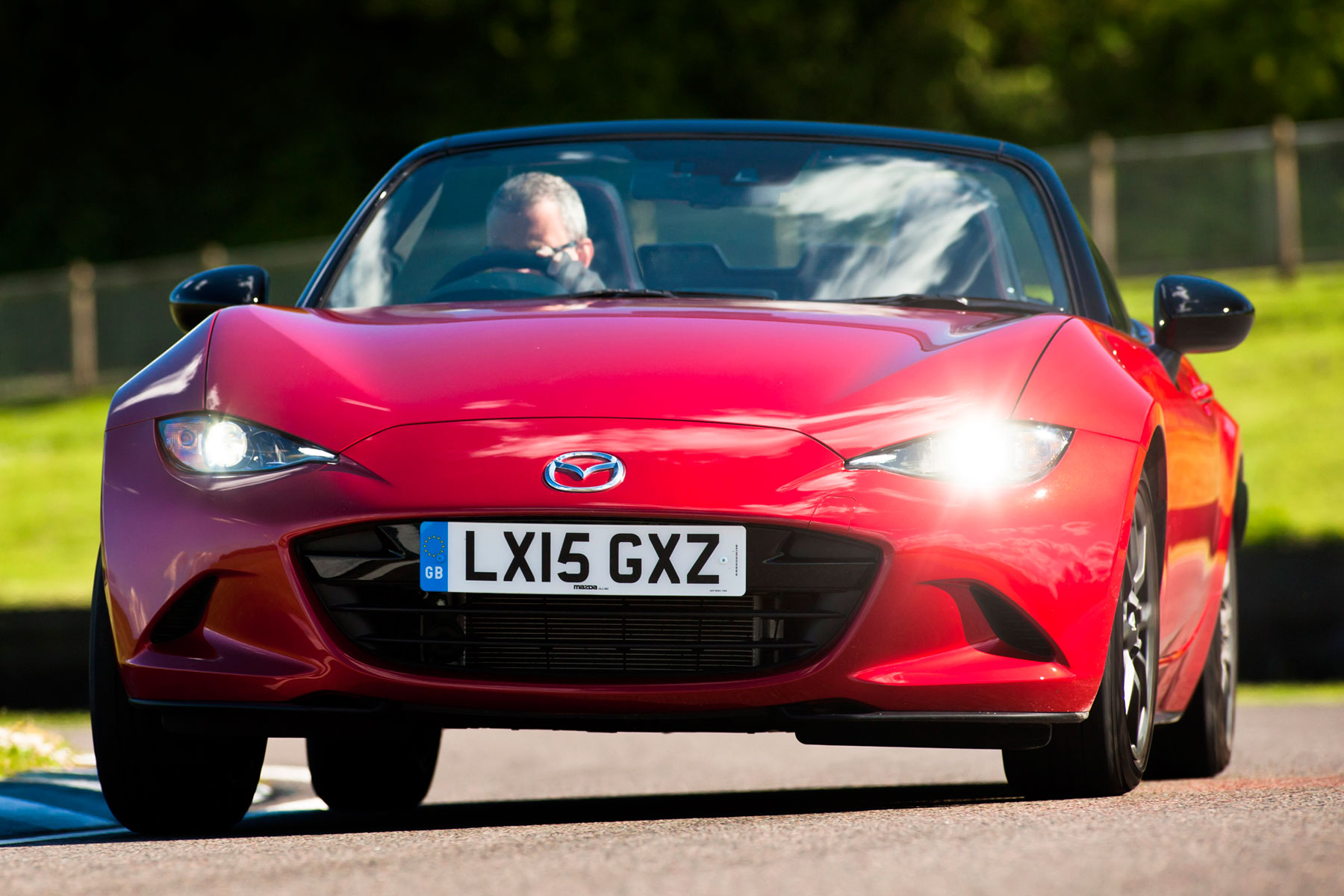 It’s very easy to look back at an old car with misty eyes and make bold claims about it being a legend that changed the motoring landscape. But few would disagree that the original Mazda MX-5, launched in Europe in 1990, was not only hugely significant but also one of the all-time great driver’s cars.

Its snickety gearchange, 50/50 weight distribution and light weight meant it was enormous fun to drive. It truly was a modern-day British sports car – inspired by the likes of the Lotus Elan and Triumph Spitfire, but also affordable and reliable.

For the last 25 years the MX-5 has sold in huge numbers. In 2000, Guinness World Records named it the world’s best-selling two-seat sports car and in 2015 production is nudging one million.

Over that time it’s managed to stay fairly close to its original principles of affordability and light weight. But as buyers demand more technology and regulations require more safety kit, it’s inevitably got bigger and heavier than the original car from 25 years ago.

However, the new model has bucked that trend. Incredibly, it’s 100kg lighter than its predecessor, and a centimetre shorter. It’s even shorter than the first-generation model. That’s impressive.

But that’s enough about the heritage stuff that Mazda is, quite rightly, taking full of advantage of for the launch of the new MX-5. What’s it like? 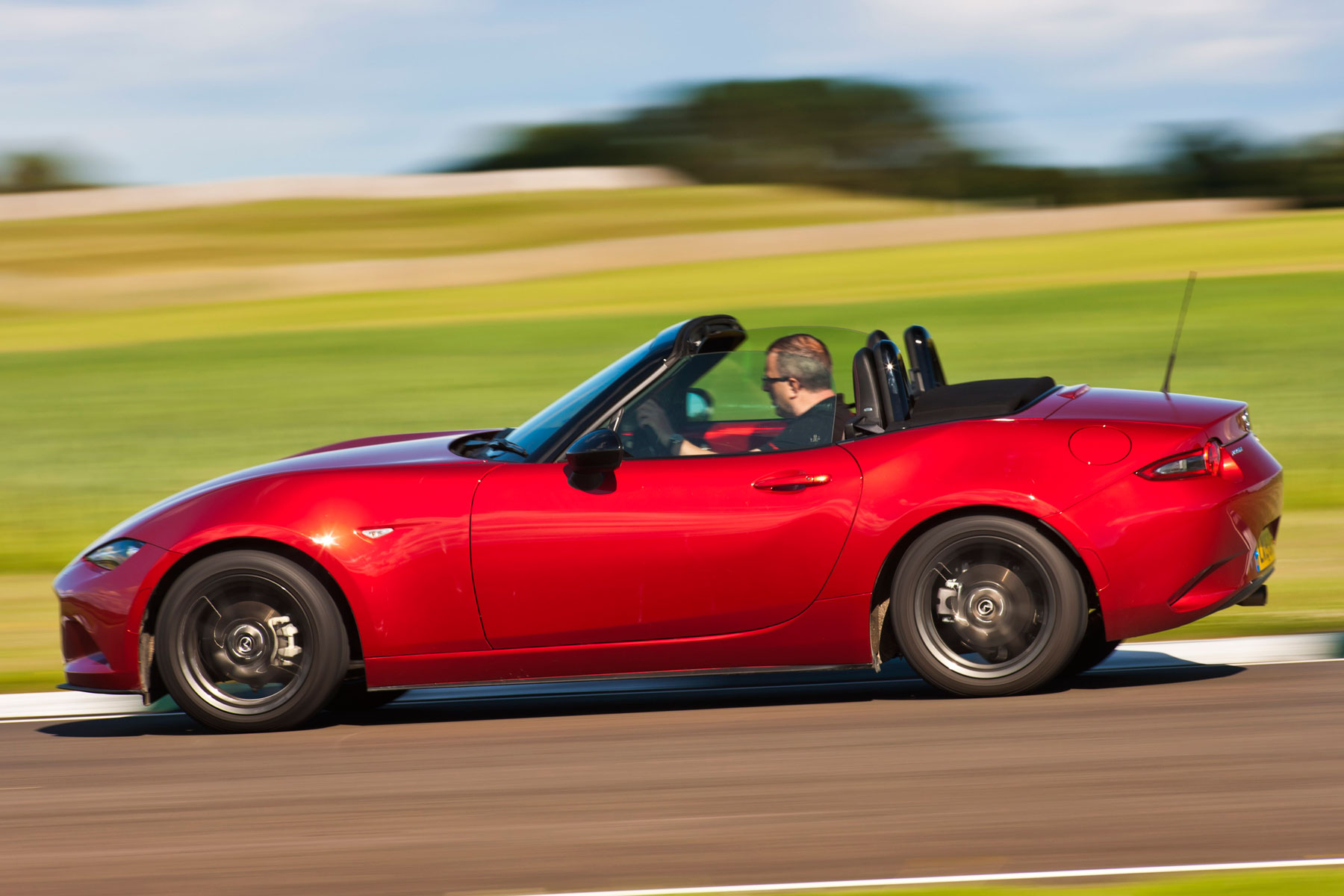 The range-topping four-cylinder 2.0-litre petrol engine produces 160hp – hardly a headline-grabbing figure, but combined with the MX-5’s low kerbweight, it feels properly quick, with adequate low-down torque and enough go to see you comfortably in excess of the speed limit.

It punches well above what its 7.3 second 0-62mph time suggests, and genuinely feels like a cut-price Porsche Boxster that’s powerful enough to tempt people from their hot hatches.

Many argue that the entry-level 1.5-litre is actually the sweeter engine for the MX-5. Mazda admits that the car has been engineered with the 1.5 in mind, and on twisty rural roads of the Scottish highlands where the UK launch was held, there’s no denying that this engine feels more in-keeping with the MX-5 ethos.

It’s noticeably lacking in torque compared to the 2.0, but the six-speed gearbox is so slick that many buyers won’t begrudge dropping down a gear to extract the best from the smaller engine.

That said, aside from the entry-level model (which is only available with the 1.5-litre engine), the step up to a 2.0-litre is only £850. That makes the 1.5-litre a little hard to justify in our book.

It’s things like the gearchange that Mazda engineers have worked so hard to perfect – and make for such an enjoyable driving experience. It all feels so right. The pedals are in the right place, with the clutch the perfect weight to provide a sports-car feel without giving you cramp.

The brake pedal provides loads of feel, giving you confidence to apply pressure if you feel the need, while the accelerator is responsive and perfectly placed for honing your heel-and-toeing. While many MX-5s will be bought for cruising city streets, it’s so nicely set up should you wish to drive it harder. 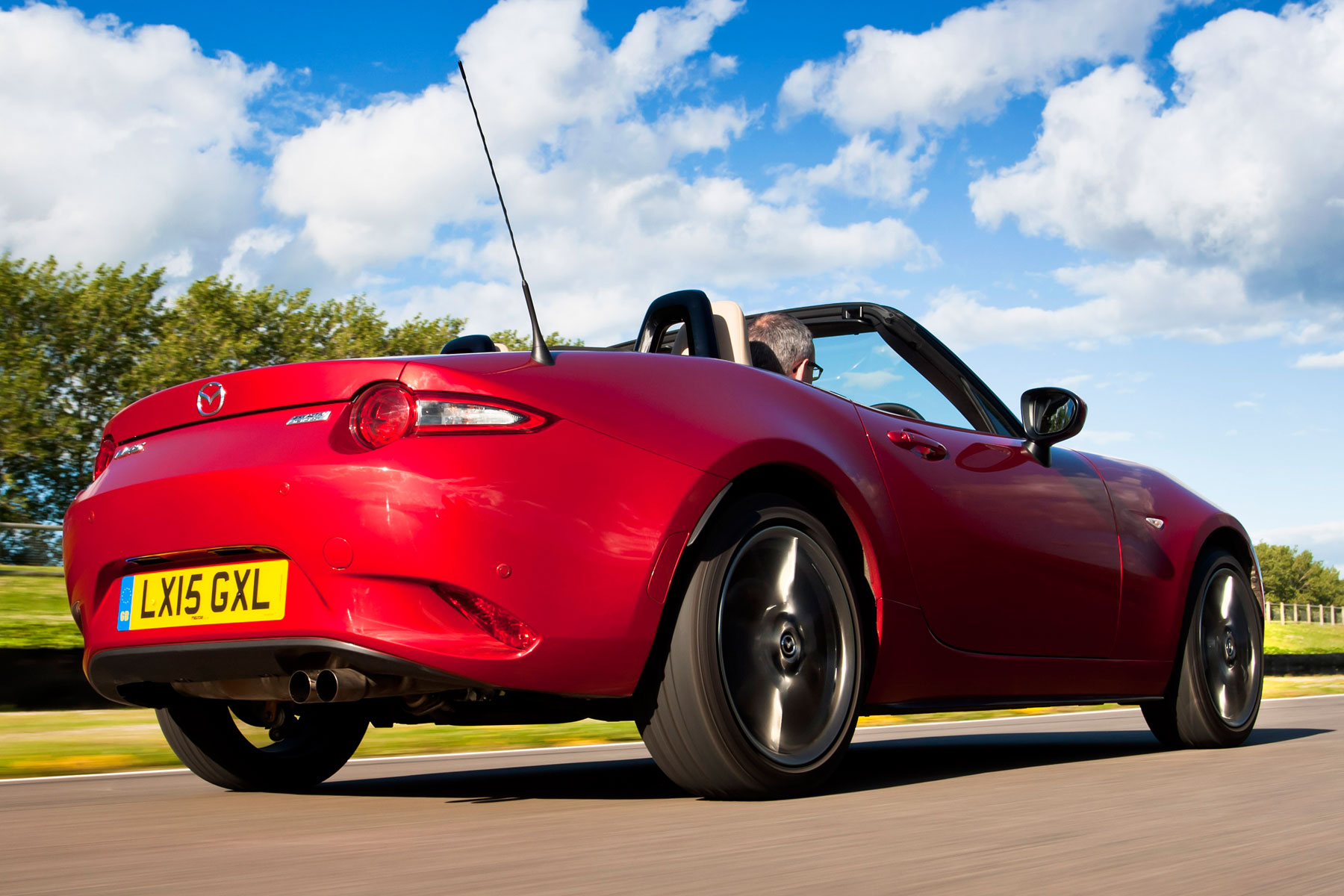 The steering, too, is responsive in a typical MX-5 manner. We spent some time in a basic first-generation model on the launch without power steering (such an analogue driving experience!) but even after that, the fourth-generation’s electric set-up didn’t disappoint. The hardcore will turn their noses up, but Mazda has got the steering so right.

Ride quality is something the MX-5 has always surprised with. Indeed, as standard it’s always sat higher than you might expect and provided a compliant ride. That’s also true too with the latest model – it remains composed over bumps, even with the larger 17-inch wheels and Bilstein suspension of the higher-end models.

One issue we noticed with both 1.5- and 2.0-litre versions is a tendency to transfer irritating noises into the cabin. The 2.0-litre we drove suffered a grating metallic sound from the gearbox – a fault, we suspect, but the 1.5-litre also produced an irritating burble at low revs. A degree of sound deadening will have been removed to reduce weight and there’s only so much Mazda can do to make the four-cylinder engine sound good.

These unwanted noises aren’t a deal-breaker, but a reminder that you’re driving a sports car rather than a luxury cruiser like the more expensive Mercedes-Benz SLK. 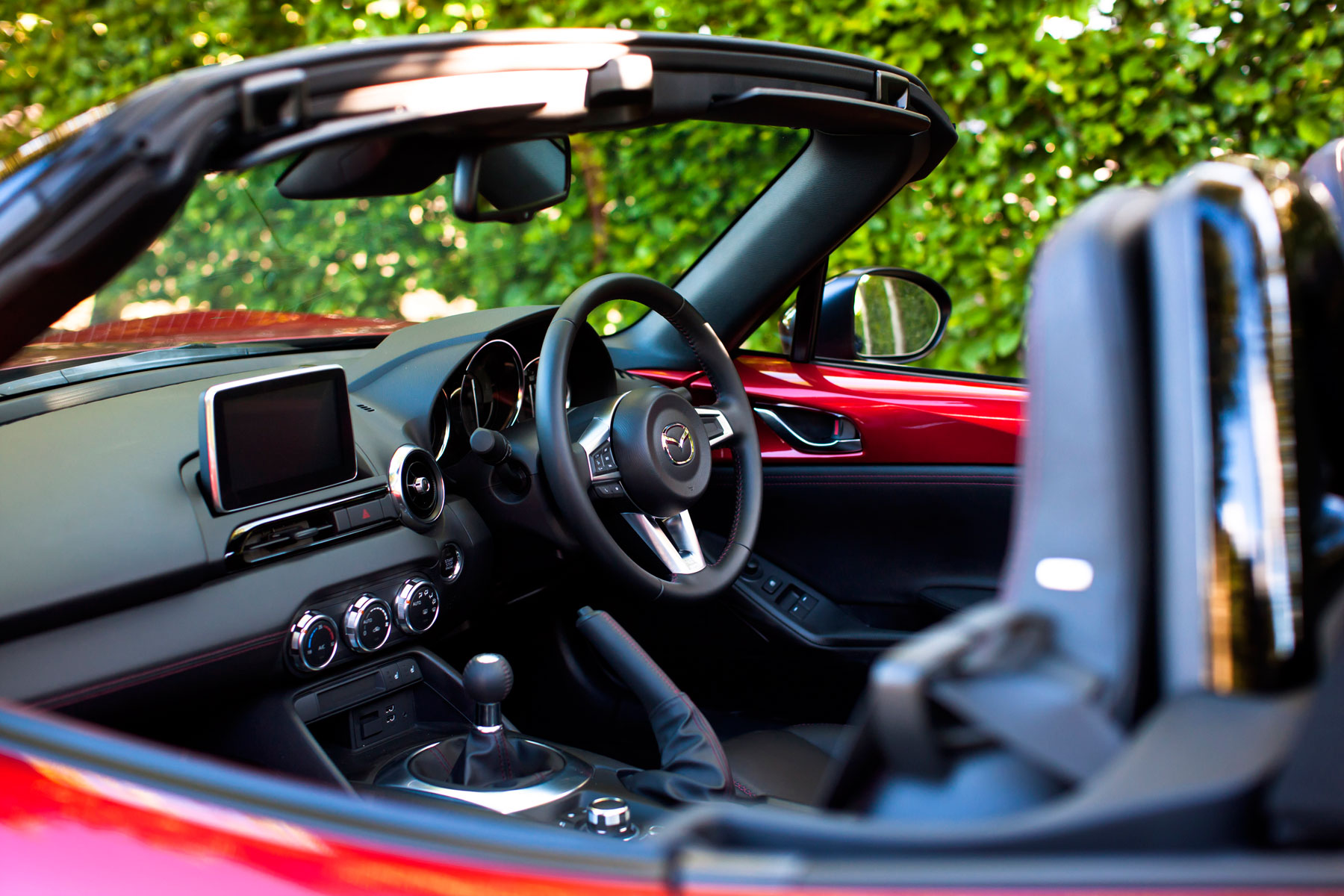 A challenge Mazda has faced is cutting weight while keeping the interior at the standard a sports car buyer would find acceptable.

The manufacturer tells us that every item has been accounted for – if weight could be saved, it has been. Surprisingly, this doesn’t result in a low-rent cabin. It’s snug, for sure, but there’s plenty of leather and red stitching to make the latest MX-5’s interior a pleasant environment.

It’s only when you start looking at minor details that you can see where weight has been cut. The sun visors, for example, are little more than flimsy bits of plastic. You won’t find unnecessary padding here – can you live without excesses in return for an exceptional sports car driving experience? We could, but don’t go expecting an interior that lives up to the standards of costlier, premium rivals.

One thing the Mazda MX-5 does lack is interior stowage space. It is such a small package that squeezing in things like door pockets and even a glovebox has proved too much of a challenge for Mazda.

It’s got around this, to a degree, by fitting flimsy cup holders that can be moved between the side of the centre console and between the seats. But if you wish to remove them when they’re not in use, there’s nowhere obvious to store them.

As a further weight-saving measure, the MX-5 shuns a fancy electric folding roof in favour of a fabric manual one. Don’t worry, though – it’s brilliantly easy to put up or down within seconds. You can even do it from the driver’s seat – it’s that light. 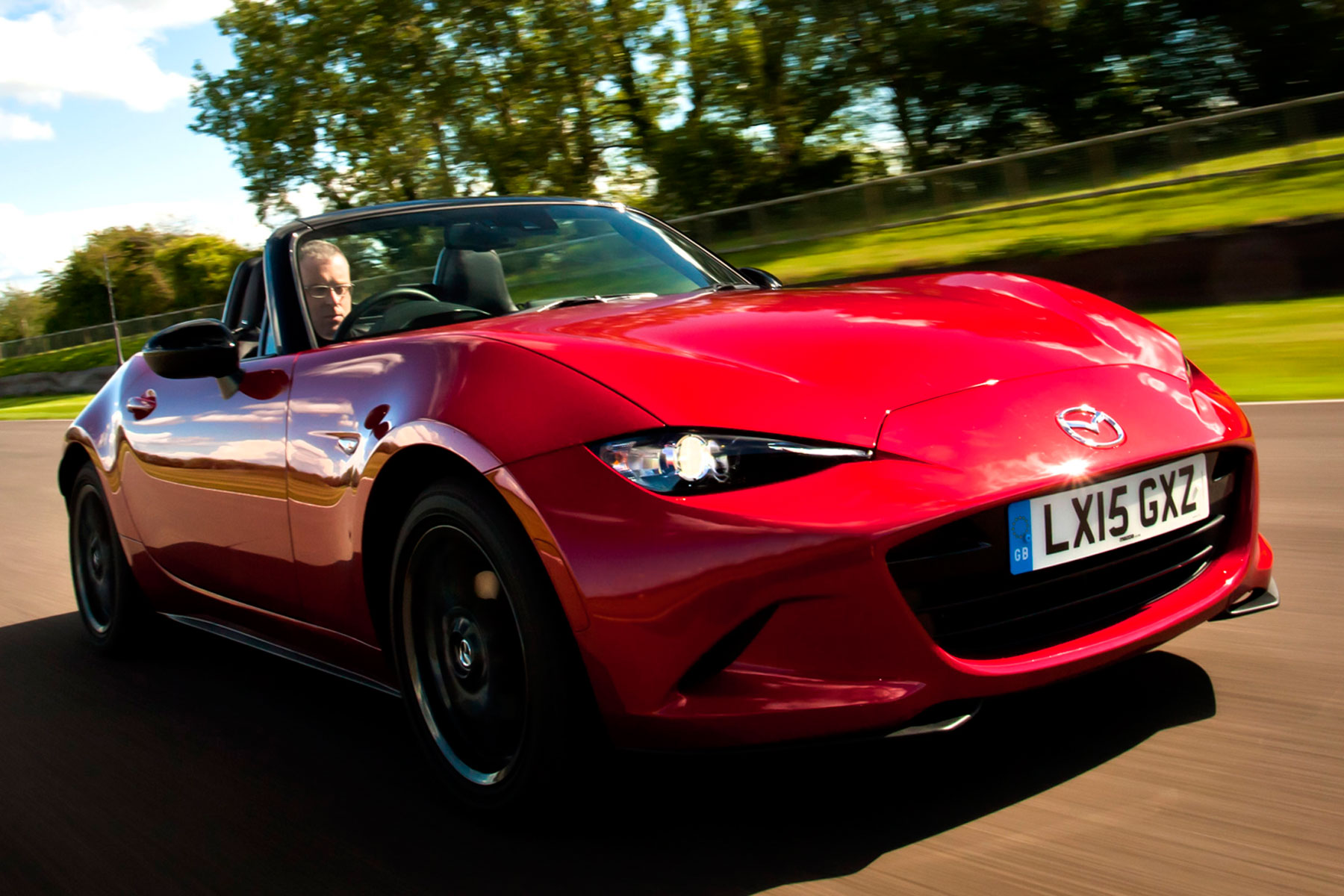 The Mazda MX-5 is the final car in the manufacturer’s line-up to receive its Skyactiv technology – with high-compression, naturally-aspirated engines offering impressive fuel economy figures without resorting to a turbo.

The result is genuinely commendable for a car as enjoyable to drive as this. The 1.5-litre returns 47.1mpg on the combined cycle. And while you’re unlikely to achieve this if you’re making full use of the MX-5s entire rev range (and you’d be silly not to), we suspect the real life figures may not be far off.

Insurance companies are likely to favour the MX-5’s relatively sedate performance figures compared to rivals, so it won’t cost a fortune in that regard, either. 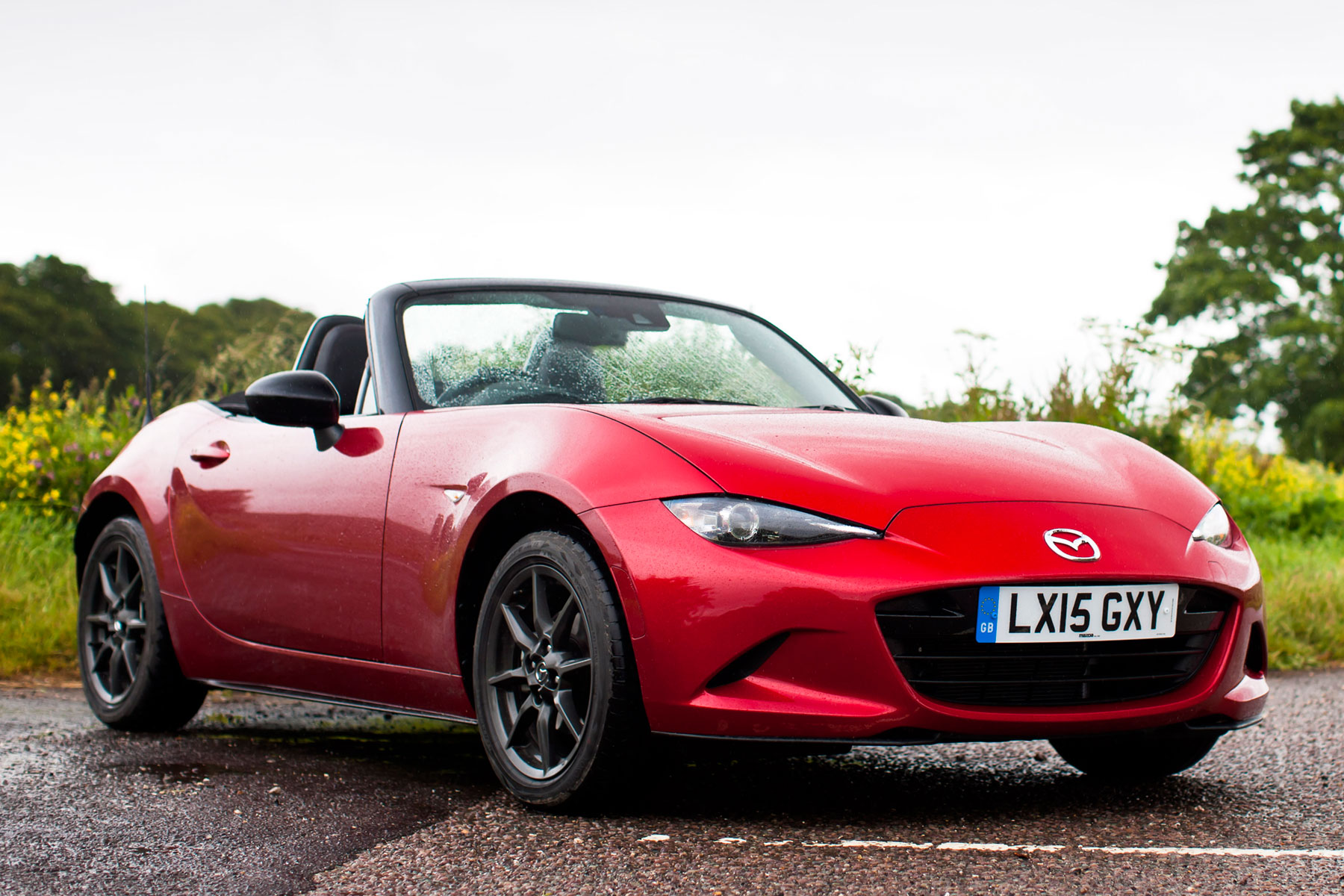 It’s good, the new MX-5. Really, really good. So much time has clearly been spent making this a keen driver’s car – and we urge you, ignore the figures. If you’re contemplating this or a warm hatch, just drive the Mazda.

Whether you opt for the 1.5- or 2.0-litre is a harder decision. It’s very easy to say the MX-5 is well suited to the smaller engine. It does go with the whole lightweight, back-to-basics ethos Mazda pushes so hard with its sports car.

But in everyday situations, the 2.0-litre’s extra torque makes life a lot easier. And that extra 29hp makes the difference between decent acceleration and having enough power to put a grin on your face in a straight line. You won’t be disappointed with the 1.5 – it certainly punches above its weight thanks to the Mazda’s low weight, but the 2.0-litre feels like a proper sports car.

For those who aren’t as fussed about the MX-5s driving dynamics, they may be a little disappointed. It’s a surprisingly focussed car, and it some respects compromises have been made.

Some would like a little more sound deadening from the engine, while some would happily forgo a few kilos of weight saving in favour of upmarket touches in the interior. But that’s not what the MX-5 is all about.

6 ways Audi is fighting back after dieselgate

Audi has some crisis management to deal with following dieselgate. Is this enough to save the reputation of VW Group’s premium brand?
Read more

The latest weapon in McLaren’s Super Series is the futuristic new 720S. We were among the first to see it at Geneva 2017
Read more

The 370hp Leon Cupra R ST is the fastest ever Seat

In the hot Seat: for £500, you can treat the Seat Leon Cupra R ST to an ABT upgrade, upping the power to 370hp.
Read more

Range Rover at 50: From the prairie to the Premier League

As the Range Rover celebrates its fiftieth, we chart the history of this farm hand-turned-status symbol. Arguably, it’s the original, and most famous, SUV.
Read more

How to protect the windscreen wipers on a frozen car

Our handy guide shows you how to protect your windscreen wipers from ice and frost damage, saving you valuable time and money.
Read more