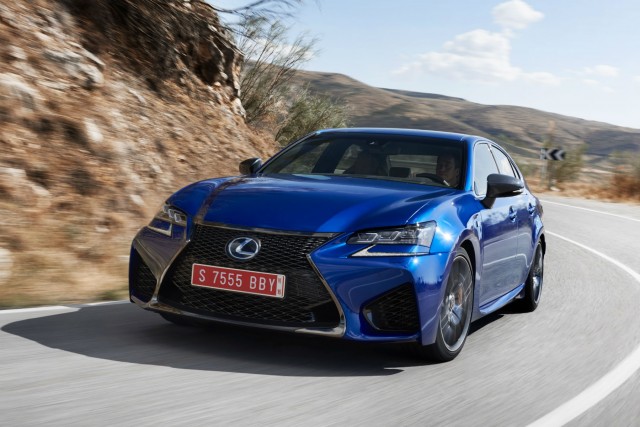 Exclusive, expensive and exciting, the GS F could make you think twice about buying that M5. 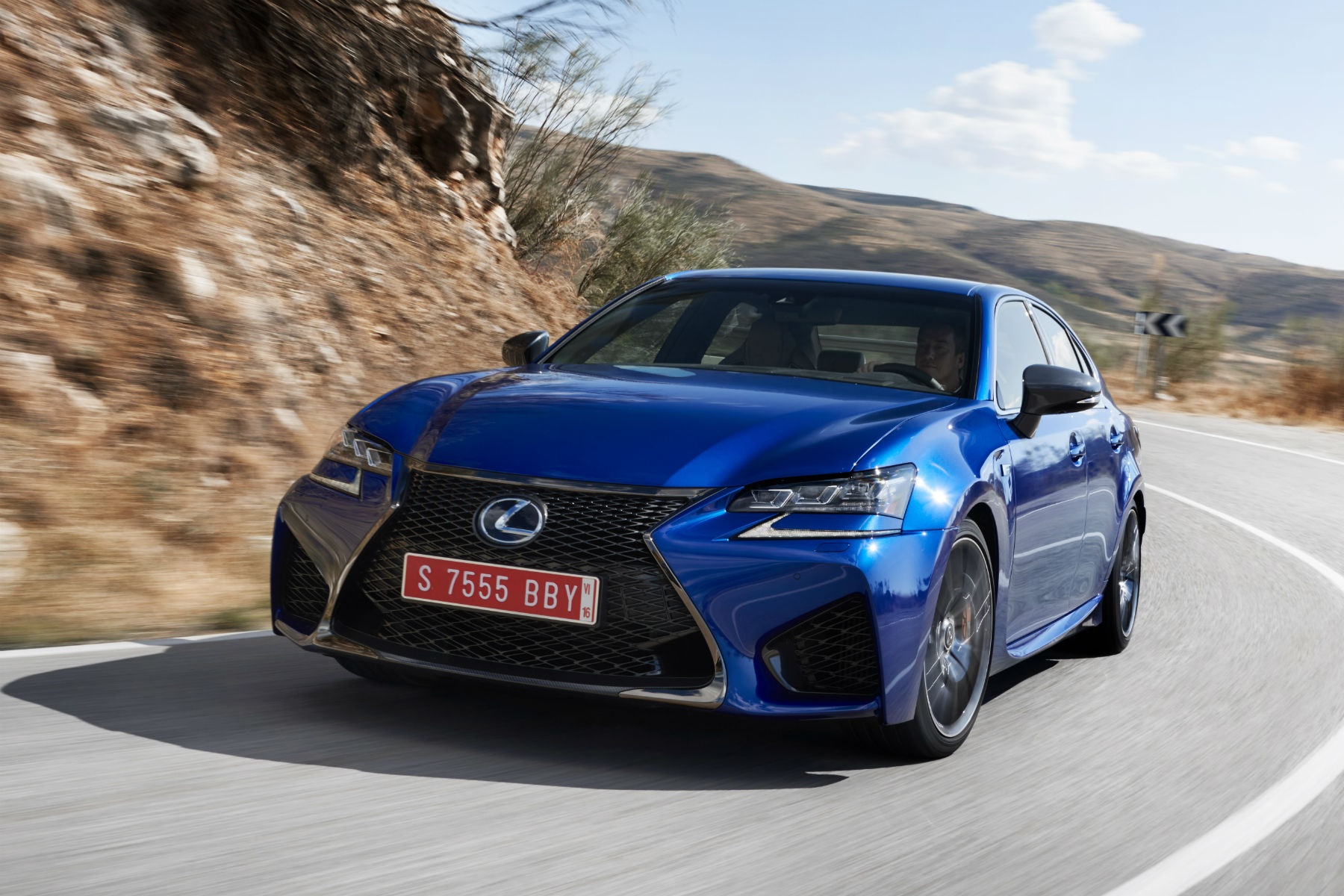 Lexus is best known for fuel-sipping hybrids, not flame-spitting super saloons. And no matter how good the new GS F is, that’s unlikely to change.

You see, this flagship V8-engined GS is destined to remain a rare sight. Lexus expects to shift just 100 each year in the UK – half as many as the RC F coupe. But therein lies the rub, because selling in small numbers is a big part of this car’s appeal. Put simply, you won’t spot another in the golf club car park.

Let’s start with the styling, which is angular, aggressive and distinctively Japanese. Lexus’ prominent ‘spindle’ grille is framed by gaping air intakes, while orange brake callipers hide behind 19-inch alloy wheels. At the rear, twin tailpipes hint at the prodigious performance on offer. There’s also a spoiler made from carbonfibre-reinforced plastic – just like the LFA supercar.

The heart of the GS F is more conventional: a 5.0-litre petrol V8 that drives the rear wheels via an eight-speed semi-automatic gearbox. However, while its Audi RS6, BMW M5 and Mercedes-AMG E63 rivals all boast in excess of 550hp, the Lexus makes do with ‘just’ 477hp. 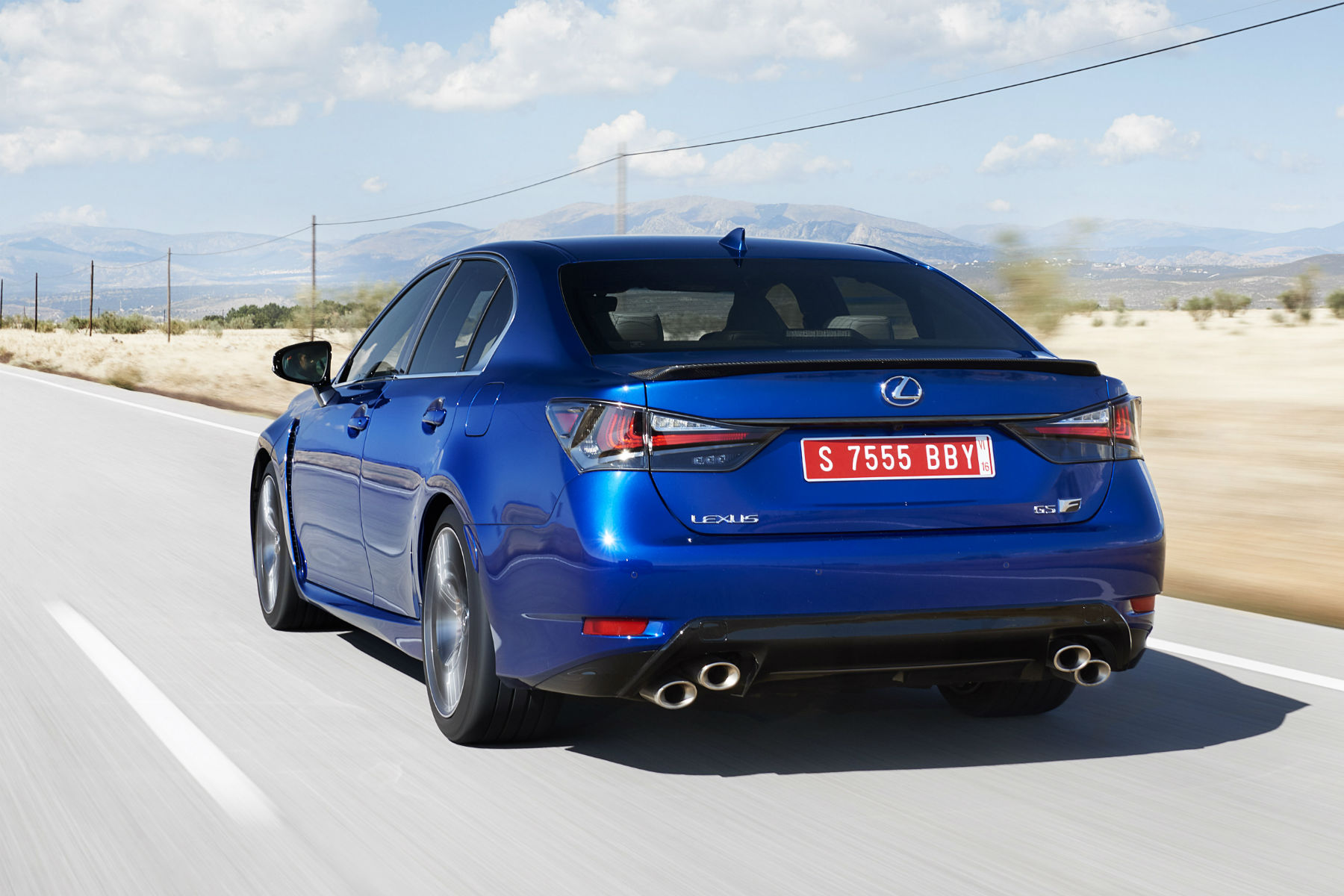 Even so, that’s sufficient to catapult this luxury car to 62mph in 4.6 seconds (on par with a new turbocharged Porsche 911 Carrera) and a top speed of 168mph. A torque-vectoring differential, which constantly adjusts drive between the rear wheels, bodes well for cornering agility, too.

In fact, the only options are a sunroof and 17-speaker Mark Levinson audio system. Beyond that, you only need worry about paint colour. Compare with the German brands, which offer a bewildering range of extras – nearly all of them at additional cost.

All of the above is somewhat meaningless, however, if the GS F doesn’t deliver the goods from behind the wheel. So we took one to Jarama race circuit in Spain – and the fabulous rural roads that surround it – to see if Lexus really can beat the Germans at their own game. 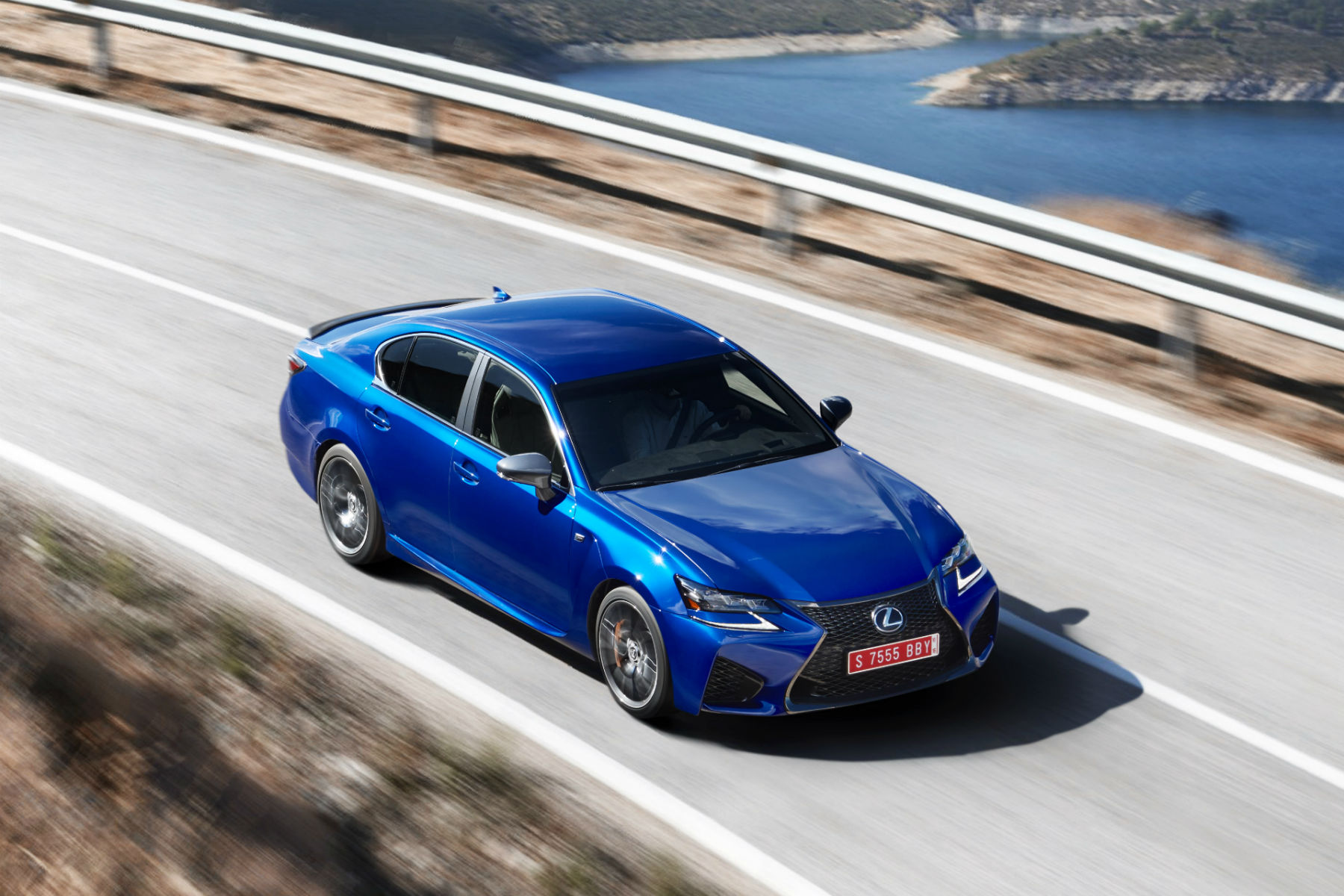 Lexus GS F: On the road

Road cars, even ‘sporty’ ones, often feel out of their depth on a race track. As the Lexus GS F is a large, four-door saloon weighing well in excess of two tonnes, you’d be forgiven for thinking it does, too.

But you’d be wrong. On the tight turns and cobbled kerbs of Jarama – a circuit used for the Spanish Grand Prix until 1981 – the GS F did a passable impression of something small, light and remarkably nimble.

Key to this agility is the standard torque-vectoring differential (TVD), which adjusts torque between the rear wheels to improve traction, turn-in and stability.

The TVD offers three modes. Standard is a stable set-up for regular road driving. Slalom sends more torque to the outside rear wheel when cornering to help the car turn more keenly. And Track diverts torque to the inside rear wheel, for improved stability – and tail-wagging oversteer on demand. 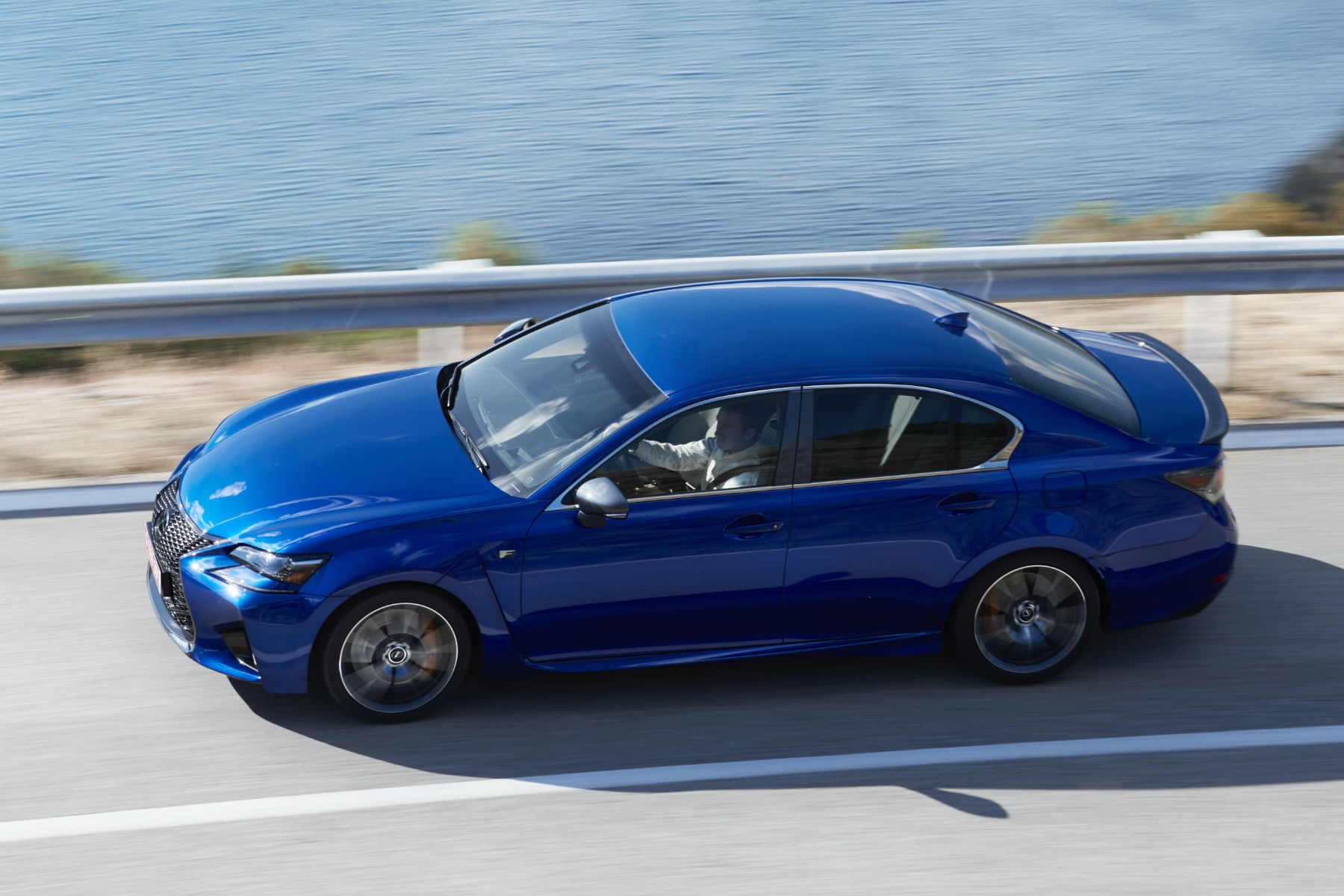 Beefed-up Brembo brakes scrub off speed effectively, but like any car with 477hp coursing through its rear tyres, the GS F needed handling with care on a rain-soaked circuit. One downhill hairpin in particular provided several heart-in-the-mouth moments. However, our abiding impression was of a car that works with its driver, offering lots of feedback and lots of fun

The GS F also impresses on the road, but for different reasons. Yes, it’s a sports saloon, but it’s also a Lexus – and that means impressive refinement and light controls. Indeed, we found the steering a little too light in anything other than Sport+ mode. Only when you approach the limits of grip does the helm really start to bite.

Above all, though, this is a car dominated by its engine. Peak power of 477hp is developed at a heady 7,100rpm, so you need to explore the upper reaches of the rev counter. But that’s no chore – this 5.0-litre V8 loves to stretch its legs.

Floor the throttle and it awakens with a rumble, then a red-blooded roar. The noise is augmented through the stereo speakers, so you’re never completely sure what’s real and what’s synthetic. But no matter, only a Mercedes-AMG V8 beats it for deep-chested, turned-up-to-11 volume. It’s preposterously, wonderfully OTT. 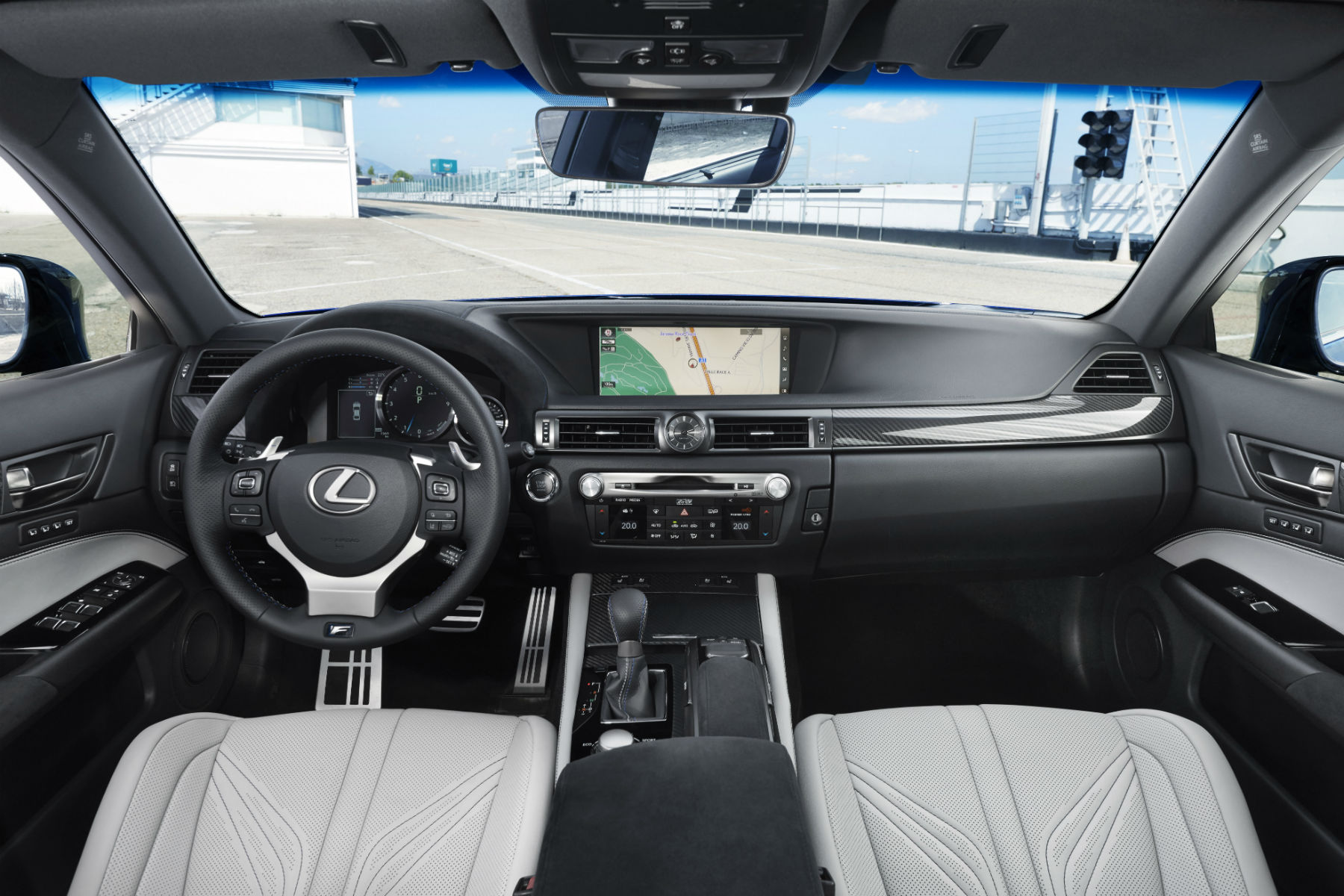 Lexus GS F: On the inside

The GS F may deliver Porsche-baiting performance, but this is no stripped-out road racer. ‘Luxury comes as standard’, proclaimed a Lexus manager over dinner and, PR hyperbole aside, he was right.

The interior of the GS F is beautifully finished. Supple leather covers the sports seats, while Alcantara (an artificial suede-like material) swathes the dashboard and door-tops. Even the flashes of carbonfibre-effect plastic look realistic.

Settle into the heated, ventilated and memory-adjustable driver’s seat and your view ahead is dominated by a large TFT rev counter. Switch to Sport or Sport+ modes and the display changes, becoming redder and angrier – another deliberate echo of the LFA supercar.

There’s also a large 12.3-inch colour screen for sat nav and infotainment functions. Its high position on the dashboard means you don’t need to divert your eyes from the road, but we still struggle with Lexus’ overly-sensitive touchpad controller. It’s much trickier to use than the ‘clickwheel’ favoured by Audi and BMW. 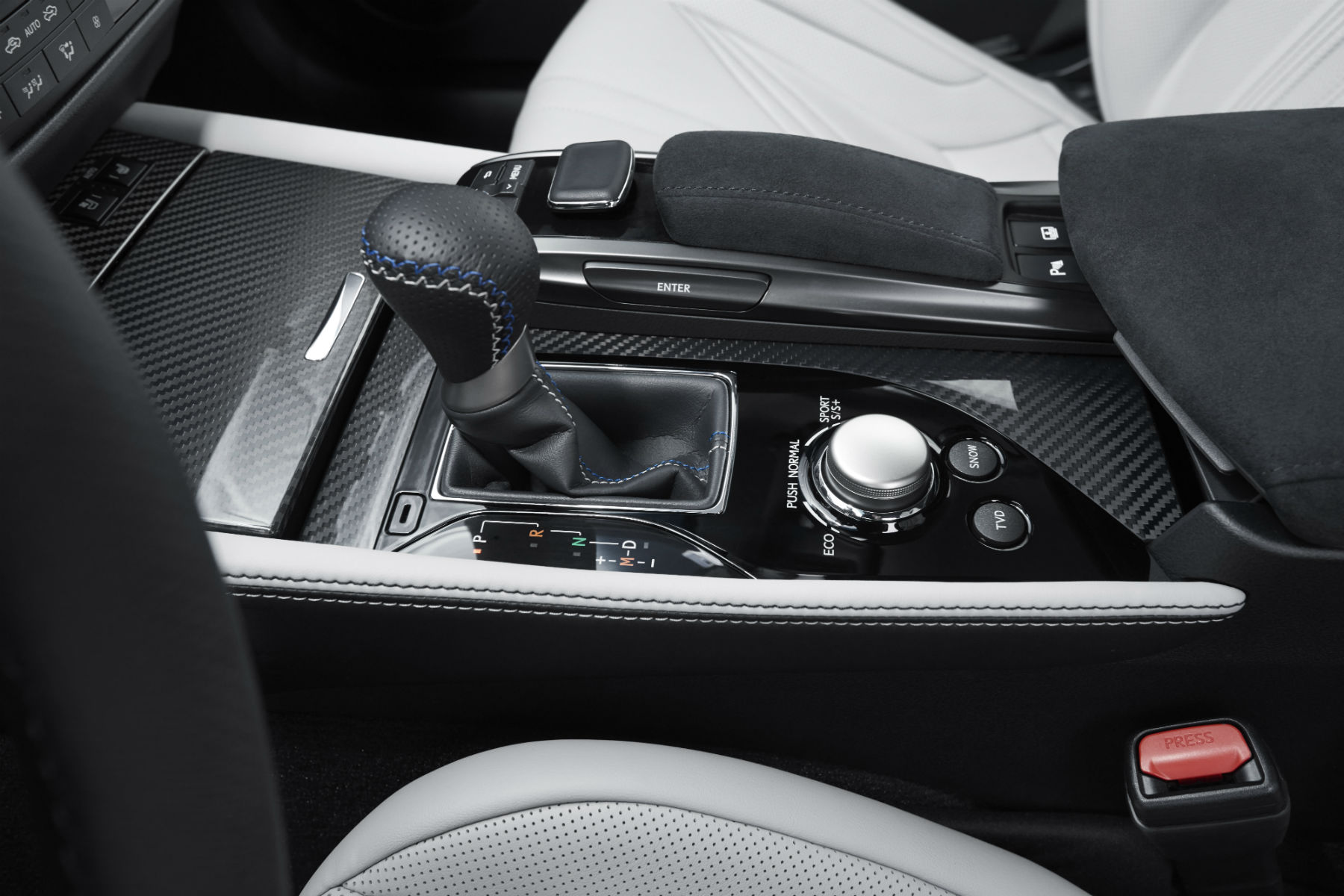 For a large car, the GS F isn’t particularly spacious in the back; both legroom and headroom are limited for taller adults. The wide transmission tunnel also means a fourth passenger sits with legs splayed in a manner that could make even hardened motoring hacks blush.

You can’t fold the rear seats to boost luggage space. However, the boot’s 520-litre volume is identical to a BMW 5 Series and there is a ski hatch for loading longer objects (like, er… skis). If you want a warp-speed family wagon, though, you’ll need to shop elsewhere – start with the Audi RS6 or Mercedes-AMG E63 estate.

We’ve already touched on the GS F’s generous standard equipment, so we won’t list it all here. Suffice to say that, like-for-like, once options are taken into account, you can expect at least a five-figure price gap between this car and its German rivals. 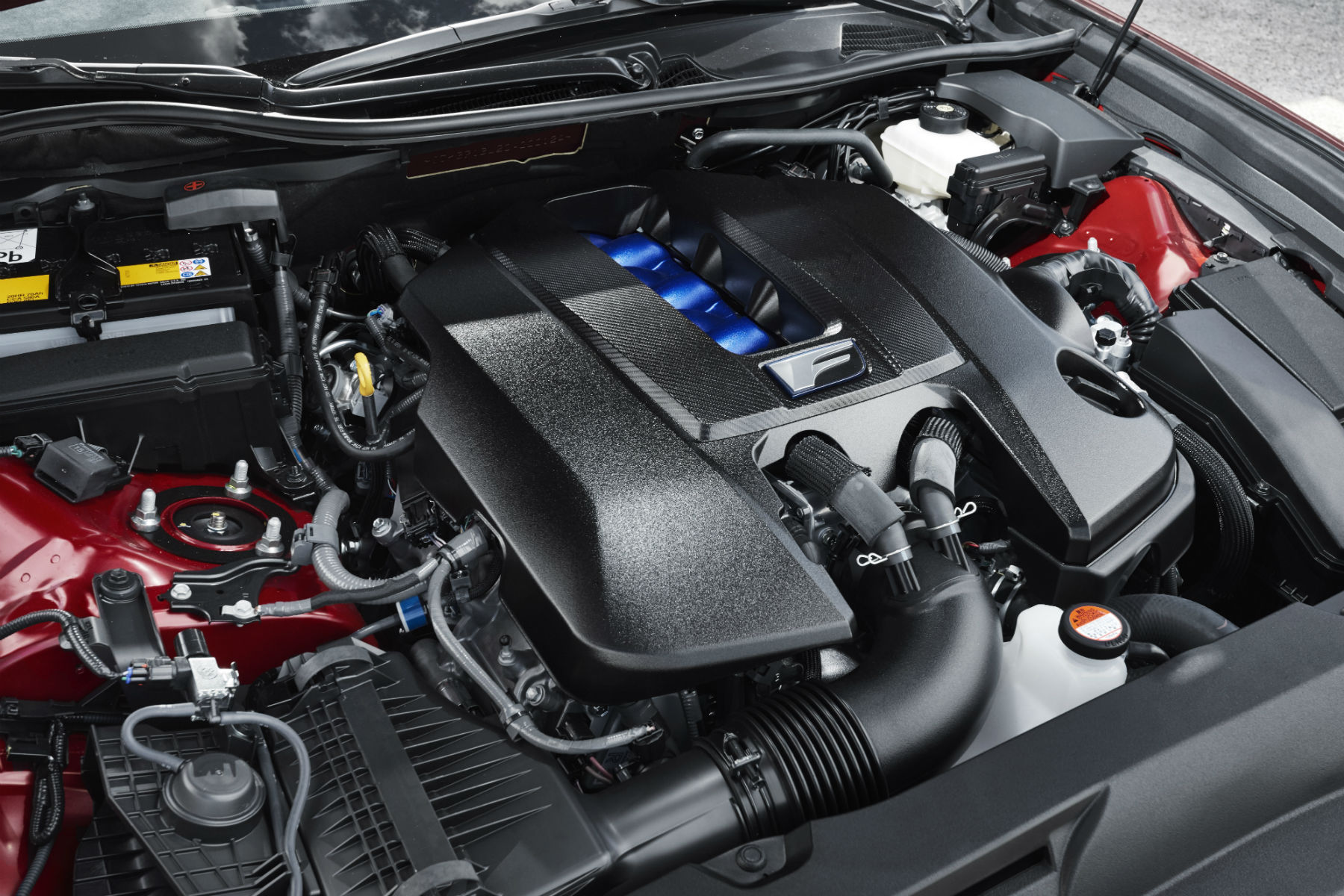 Let’s not dwell on this too much, eh? You can’t expect a 5.0-litre petrol V8 to sip fuel like a Toyota Prius, even if they are distant cousins.

Official economy for the GS F is 25.2mpg, but that figure can easily plummet below 20mpg if you drive with a heavy right foot. For comparison, the GS 300h hybrid returns 60.1mpg.

That said, three-year/60,000-mile cover is pretty much standard among the ‘premium’ brands and Lexus has a proven reputation for near-perfect reliability.

Near-perfect? Yes, genuinely. Regular chart-topping performances in Which? and JD Power surveys have made Lexus – and its highly-regarded dealers – the benchmark against which all other carmakers are judged. 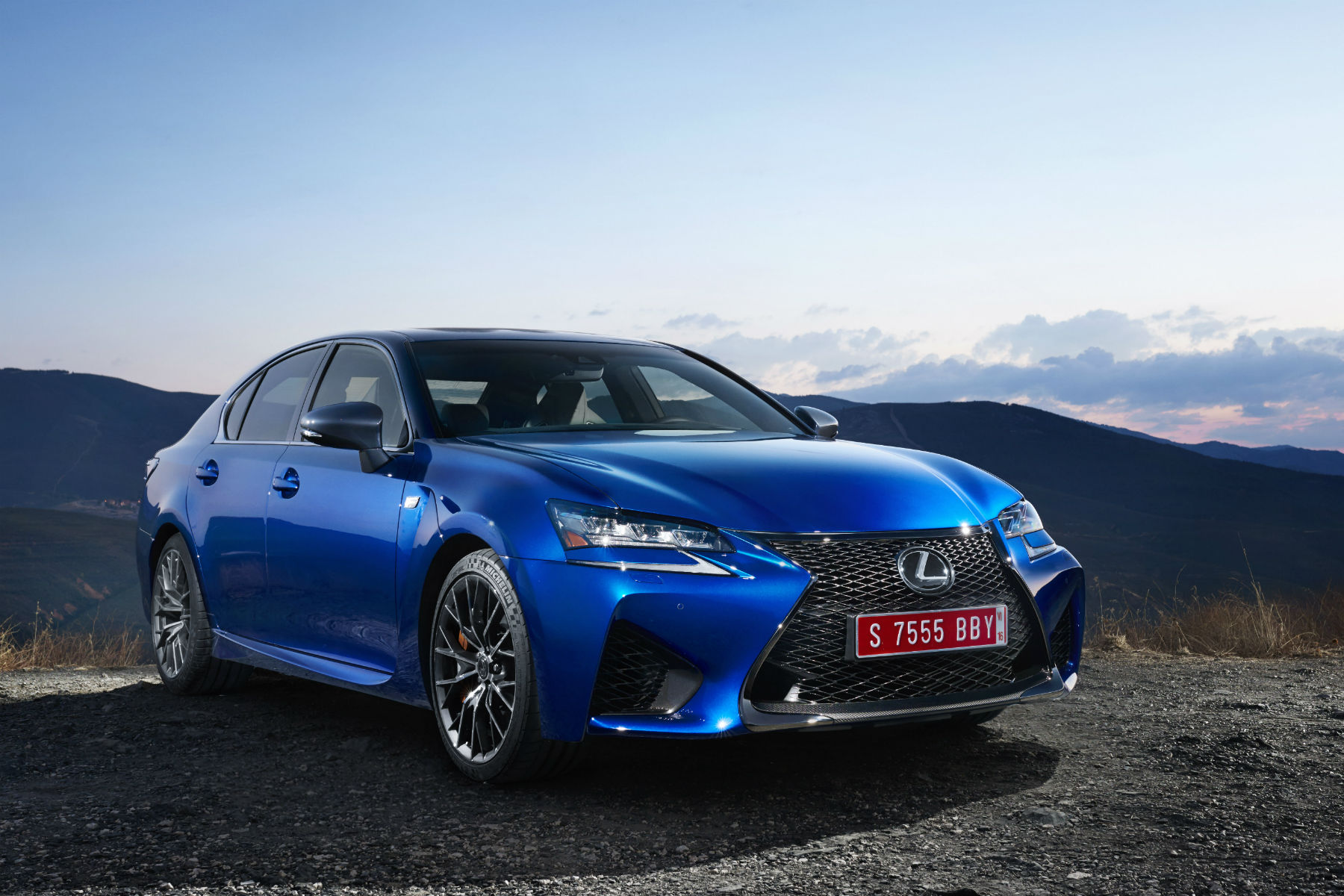 The GS F doesn’t quite offer the dynamic delicacy of a BMW M5 or the gut-punching oomph of an Audi RS6. But we’re not sure that really matters.

Today’s sports saloons provide performance so far beyond what you can safely – and legally – use on the road that emotive appeal, i.e. how the car looks, sounds and makes you feel, is arguably more important.

And there’s no question, the GS F pushes our buttons. It looks fabulous, especially in the Azure Blue seen here, or bright Solar Flare orange. And you’ll never forget there’s a V8 under the bonnet; the noise under full-bore acceleration is akin to a low-flying bomber.

The fact that it will remain a rare beast undoubtedly adds cachet, too – and protects future resale values. The RC F coupe will be more popular, but the GS F is undoubtedly cooler. 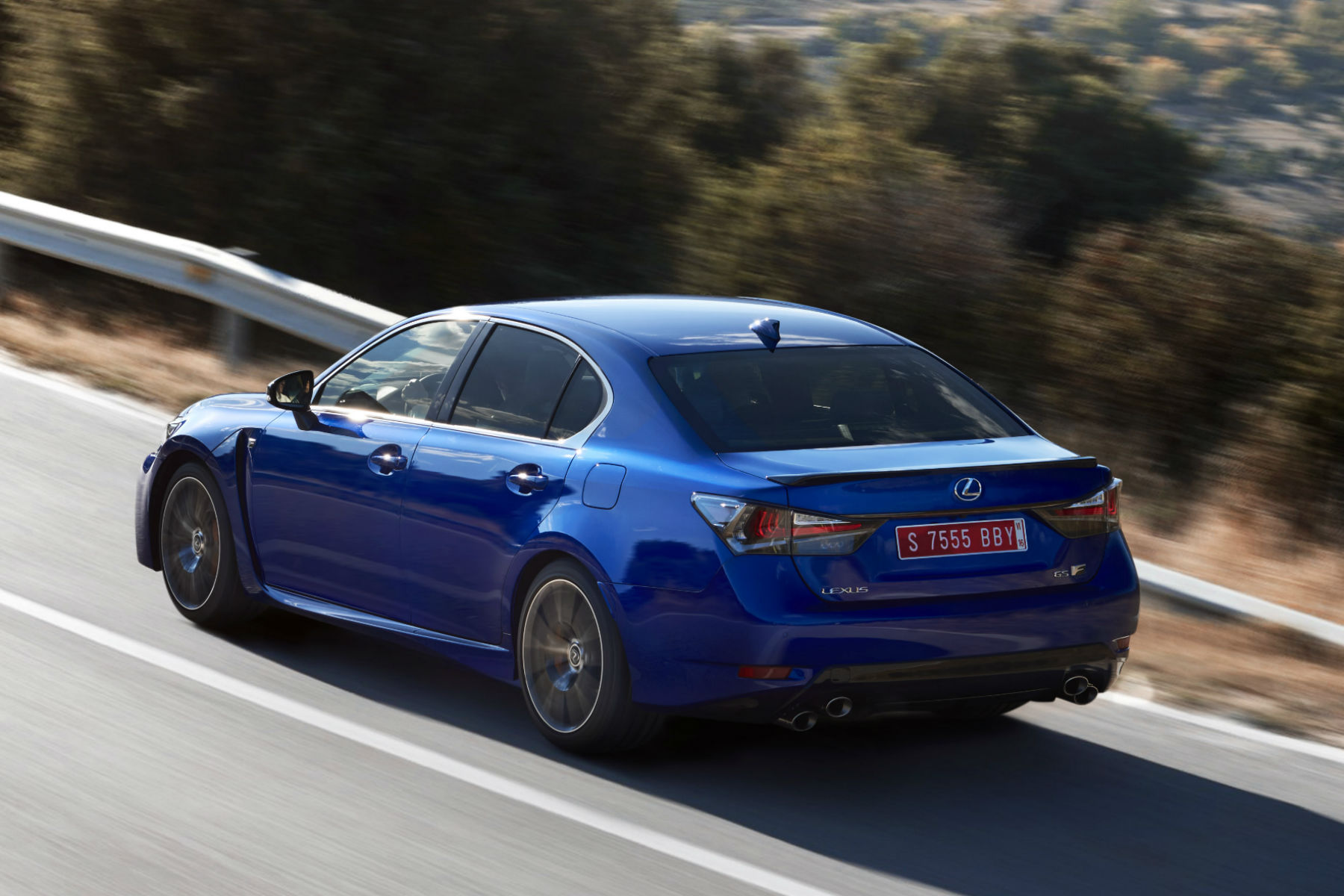 Our only real bugbear is that the GS F could have been a lot cleverer. Like most petrolheads, we’re suckers for a big V8, but surely with all its expertise in petrol/electric tech, Lexus could have produced a hybrid super saloon? A budget Porsche 918 Spyder, if you like.

Still, the days of thirsty petrol V8s are numbered, so we should probably enjoy them while we can. Right, we’re off to buy shares in Shell and see if we can find £70k down the back of the sofa…